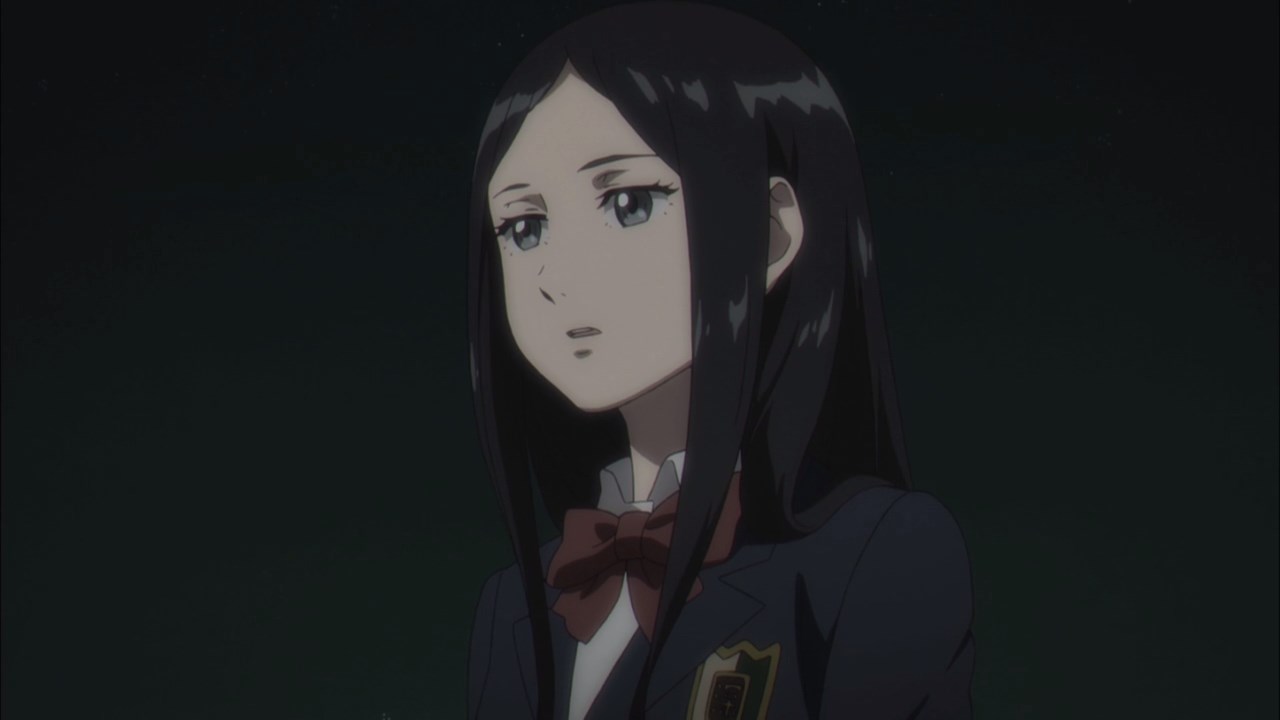 Let’s start this new story arc with Suiko Minahoshi as she’s about to jump off from the rooftop and end her life. 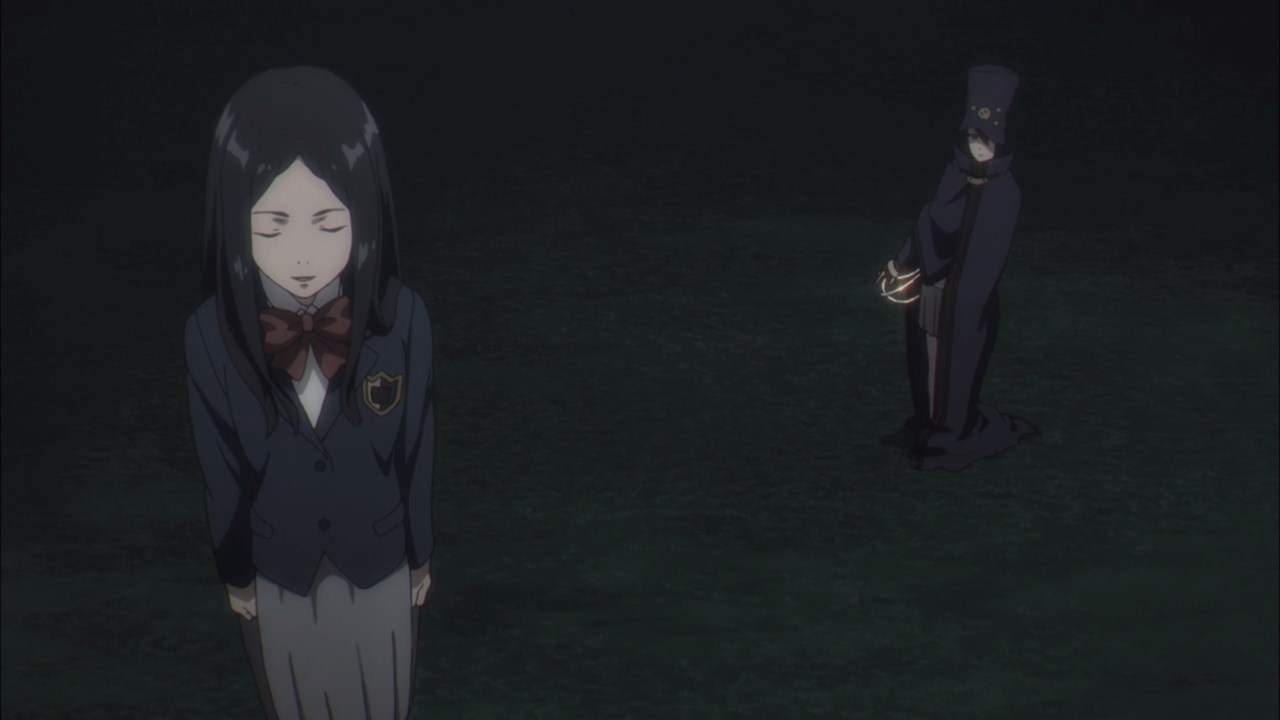 That’s until she was stopped by Boogiepop in which the grim reaper convinces Minahoshi not to end her life because it’ll be a waste for Boogiepop to take hers.

Sadly for Boogiepop, Suiko will continue to jump off the rooftop, saying that it’s the beginning of the end for the grim reaper. 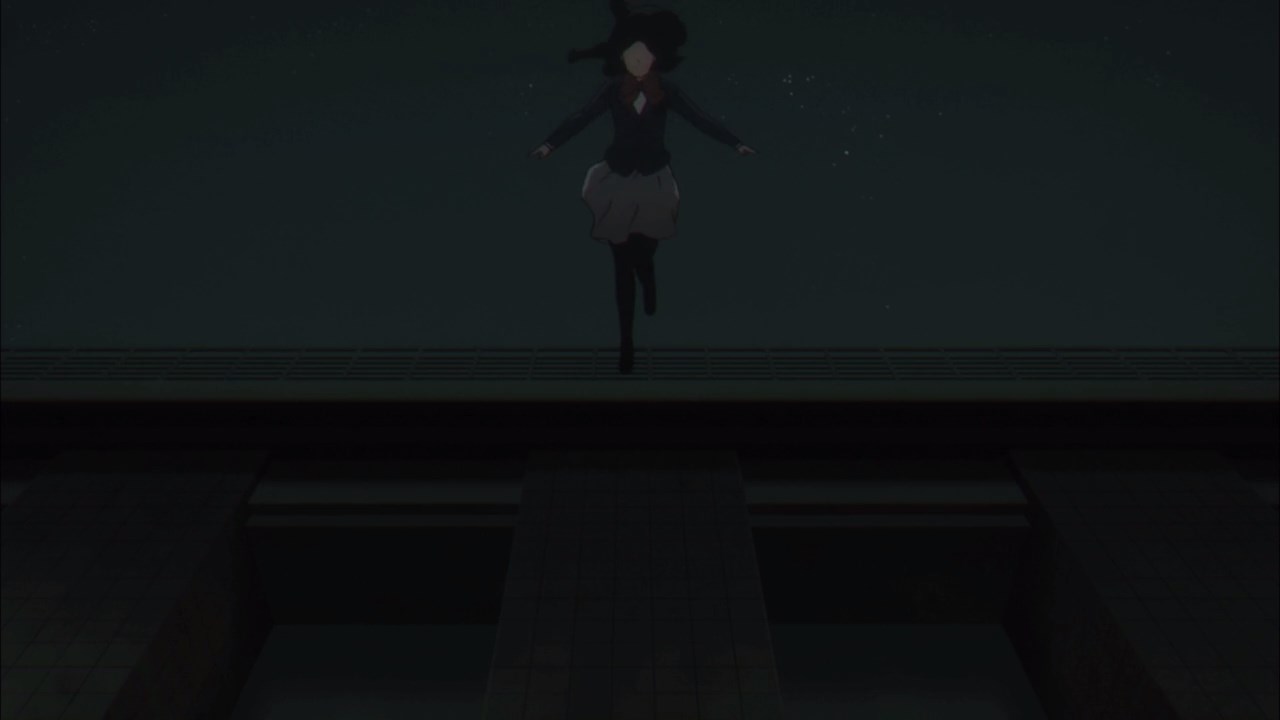 And thus, Suiko Minahoshi committed suicide as she jumps off from the rooftop of Shinyo Academy. Then again, I have a bad feeling about her suicide as it could spark something ominous. 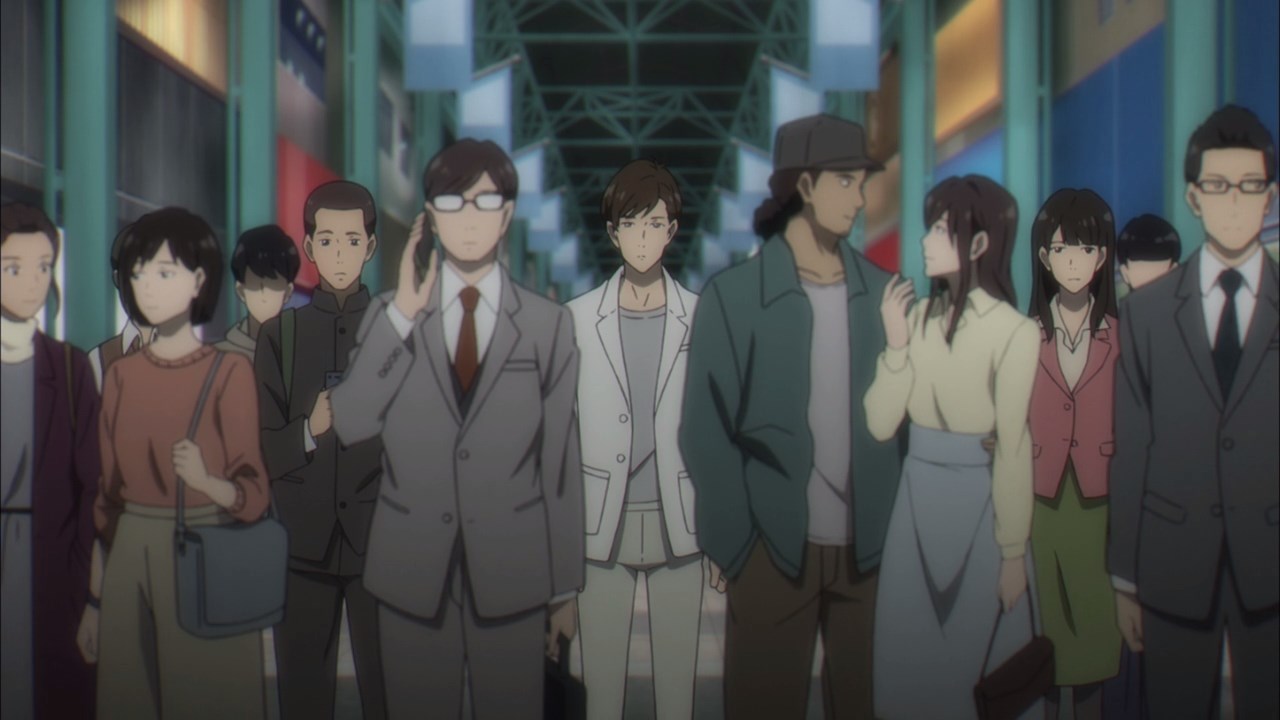 But let’s move onto the next scene where I introduce you to Jin Asukai, an art teacher and councilor at a cram school where he sees people’s hearts in the form of flowers.

Despite seeing strange things inside people’s hearts, Asukai-sensei is just a normal person. 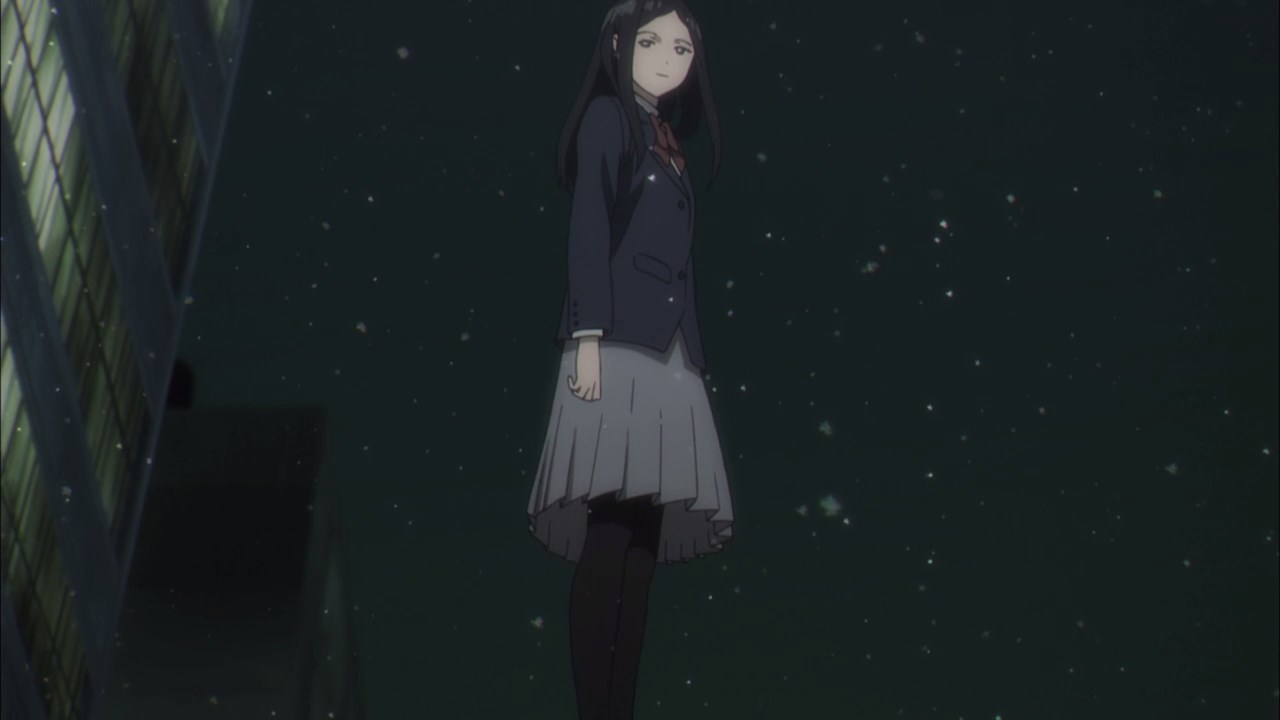 That’s until he encountered Suiko Minahoshi, now calling herself as Imaginator in which she sees people who’s about to die. 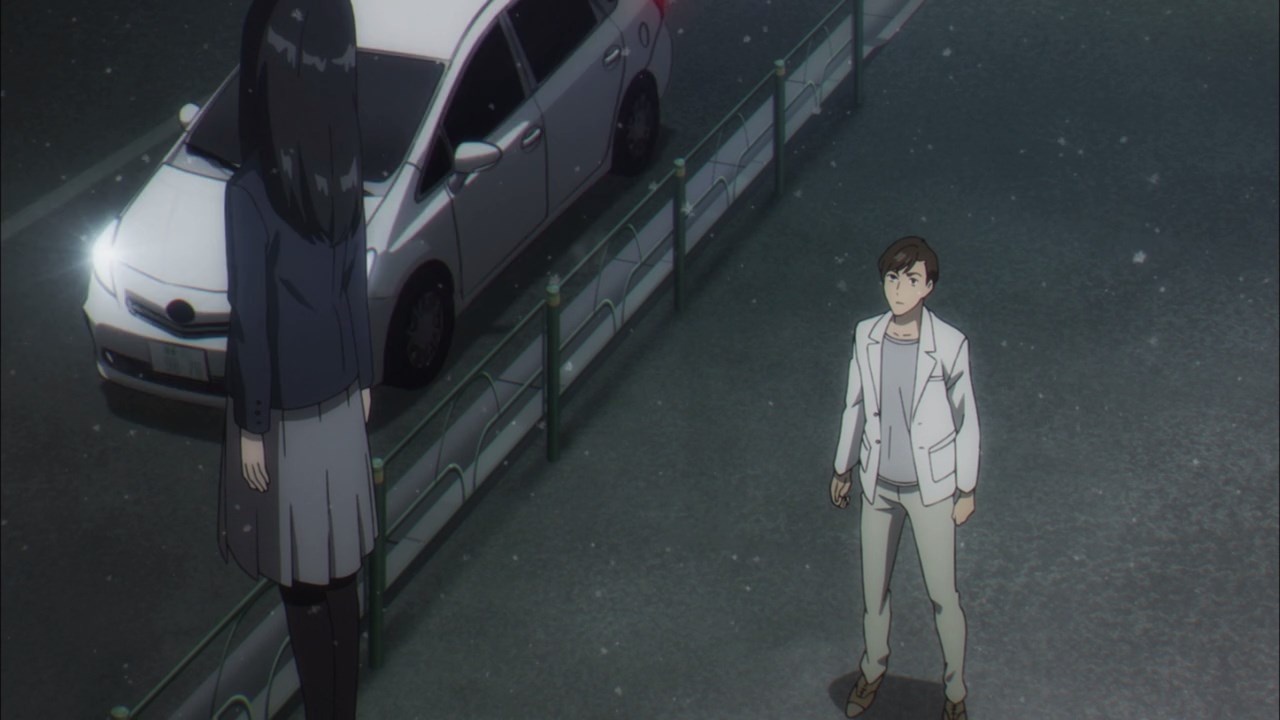 Also, Imaginator is floating on air and yet no one paid attention to her… except for Jin Asukai.

Anyways, Imaginator asked Asukai-sensei to change the current world because she knows his desires, although Jin will just scoff it off and goes home without a hitch. 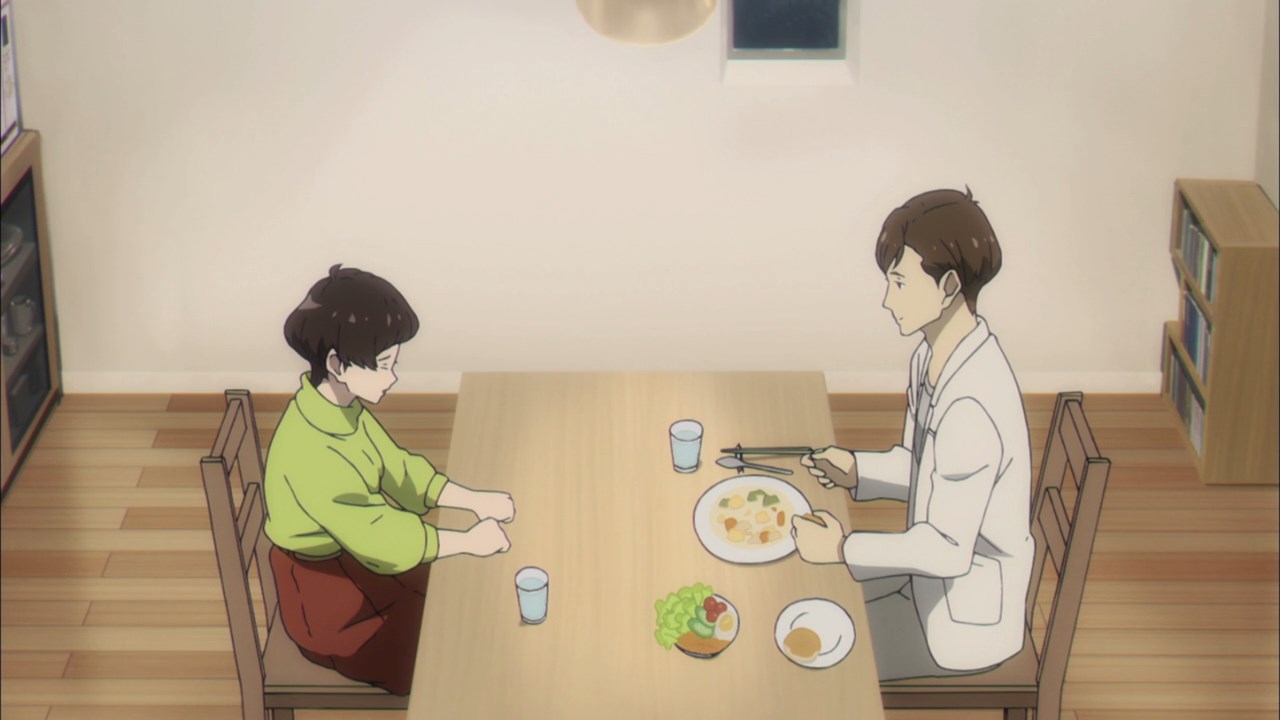 With that said, Jin Asukai spends his time chatting with his neighbor Kotoe Kinukawa. At this point, he wants to forget his encounter with Imaginator. 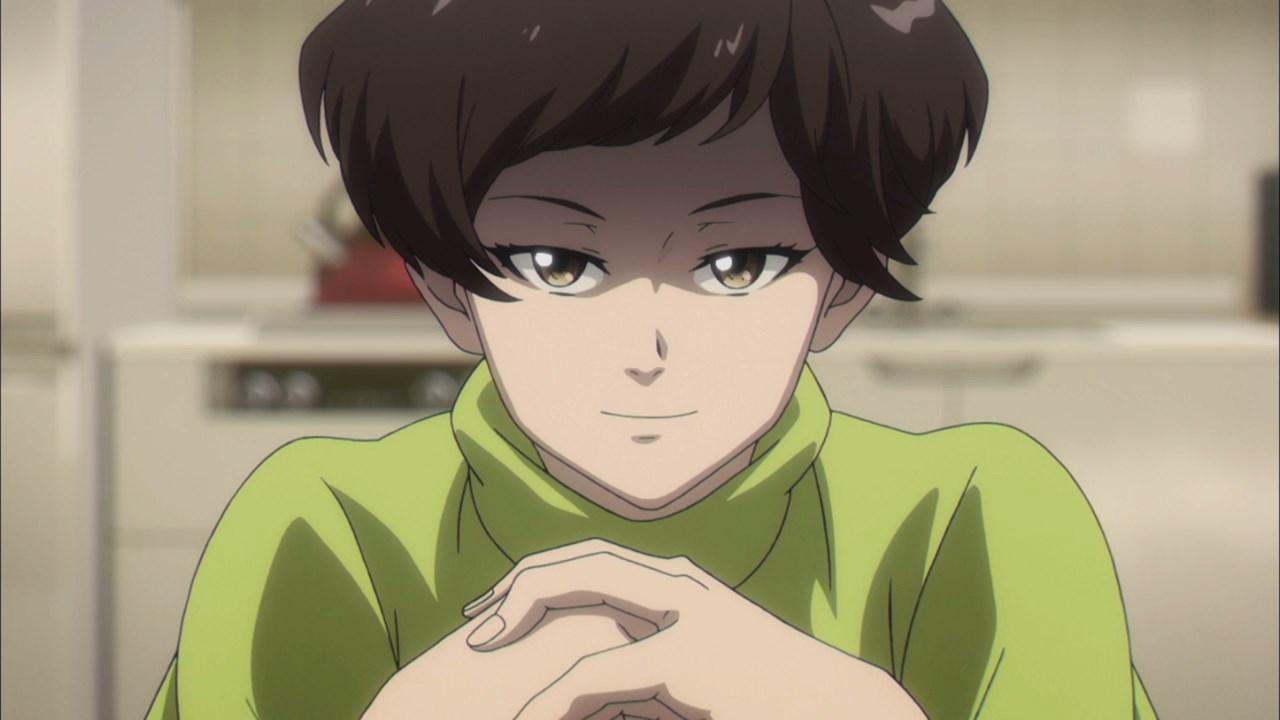 However, it appears that Asukai-sensei saw Kinukawa acting strange in which she reveals herself as Imaginator.

Turns out that Imaginator can not only show up as a ghost, but also possess someone’s body like Kotoe Kinukawa for example. 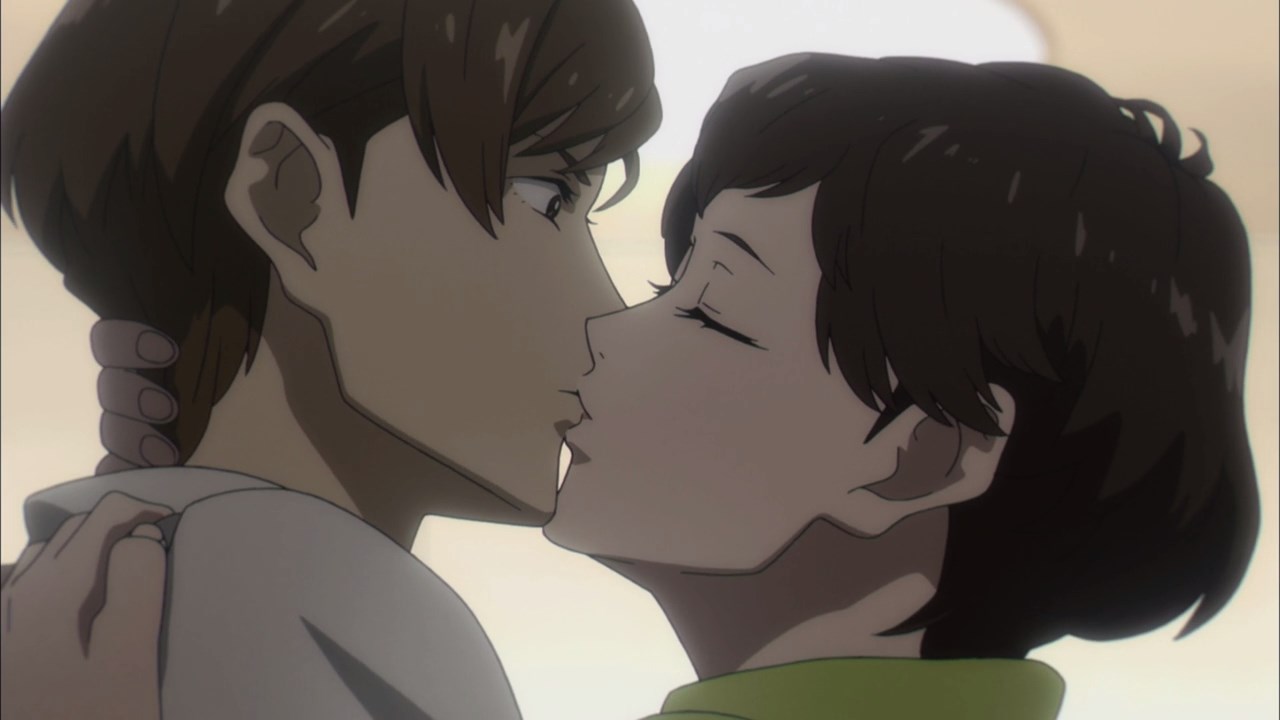 With that said, Imaginator wants to show Jin Asukai his true desires by kissing him in the lips. 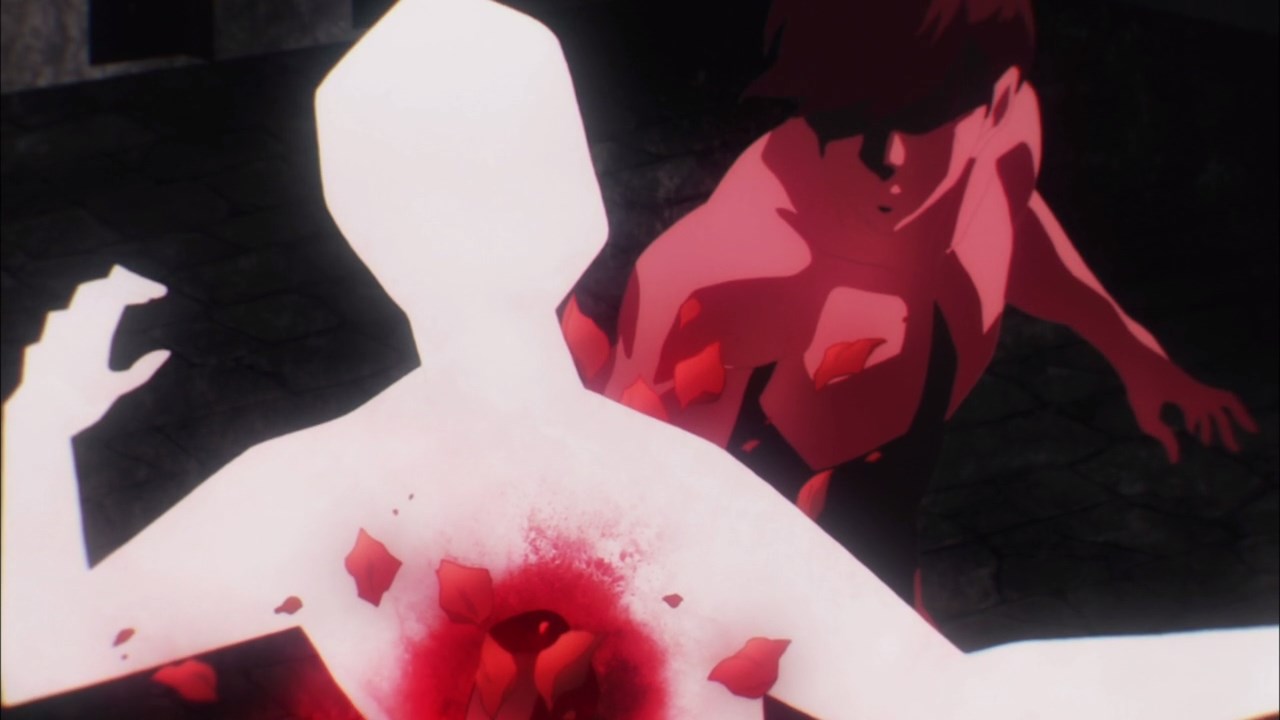 And what Asukai-sensei saw there was people getting killed with his own hands. Basically, Imaginator wants Jin Asukai to achieve his true calling, becoming a murderer.

Of course, he won’t do such a thing because they’ll see Asukai-sensei as a criminal! 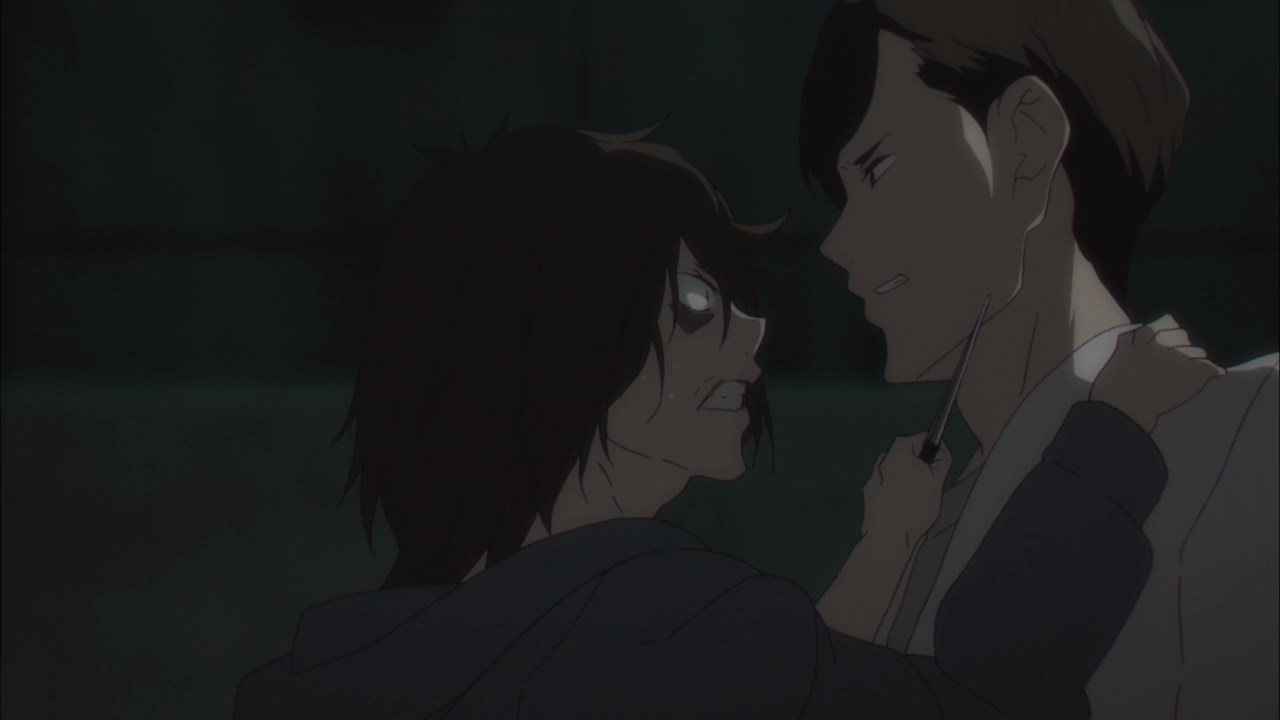 But it appears that he’ll be on the edge when Jin Asukai being threatened by one of his students, Shizuko Imazaki. Anyways, Imazaki threatened Asukai-sensei to give her money or she’ll shank him with a knife, although he won’t give her anything as Asukai-sensei tries to convince Shizuko not to do such dangerous things.

However, the reason why she wants to mug Jin Asukai is because Shizuko Imazaki has a drug addiction. She even go as far as prostituting herself but it’s not enough to satisfy her crave for drugs. And really, drug addiction is bad that they need help to break their habit. 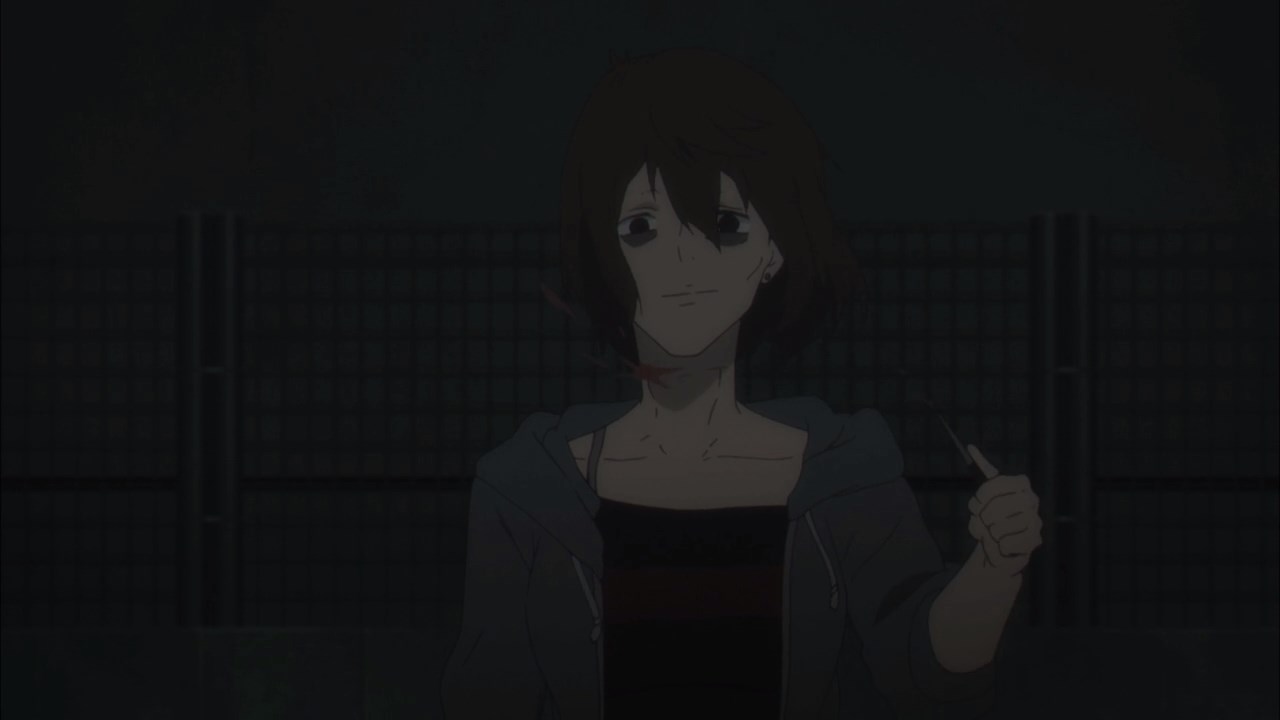 Unfortunately for Jin Asukai, it’s gets worse when Imaginator takes over Shizuko Imazaki’s body and slashed her throat. And the reason why Imaginator did that is because Imazaki’s life is about to end. 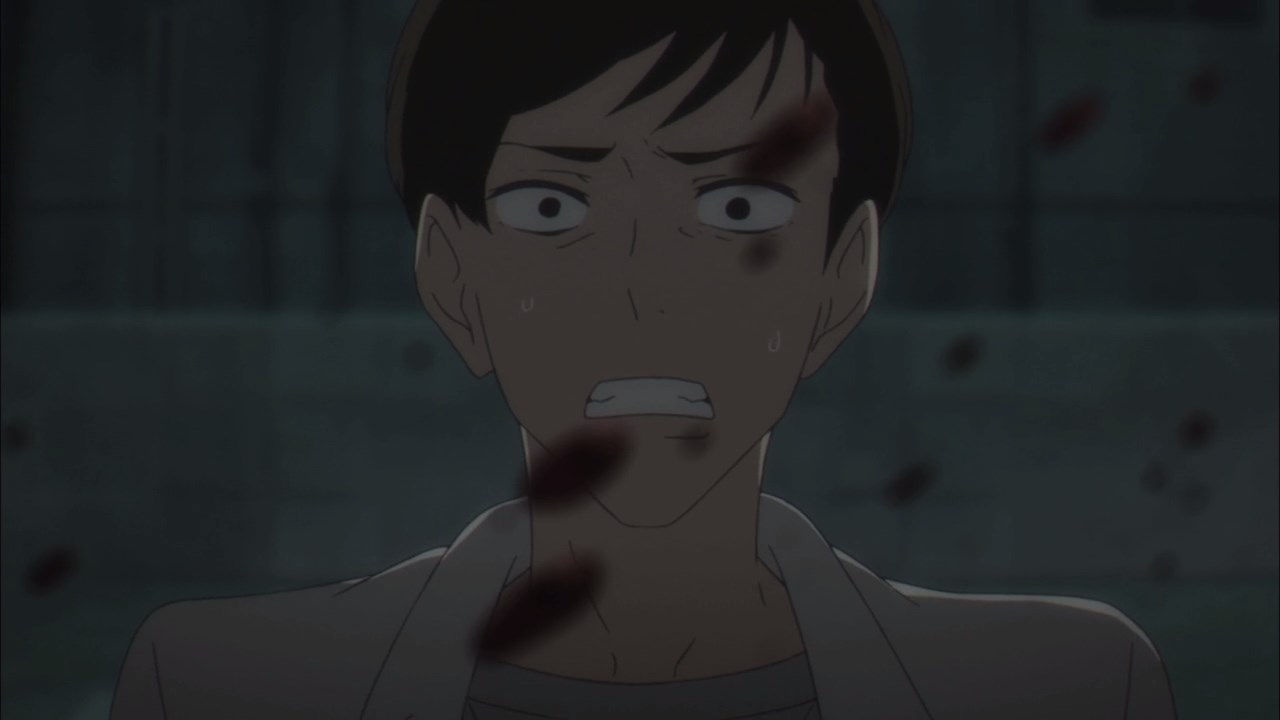 As for Jin Asukai, he couldn’t do anything but watch. And the worst part? Someone saw him in which the person called the police and arrest Asukai-sensei. 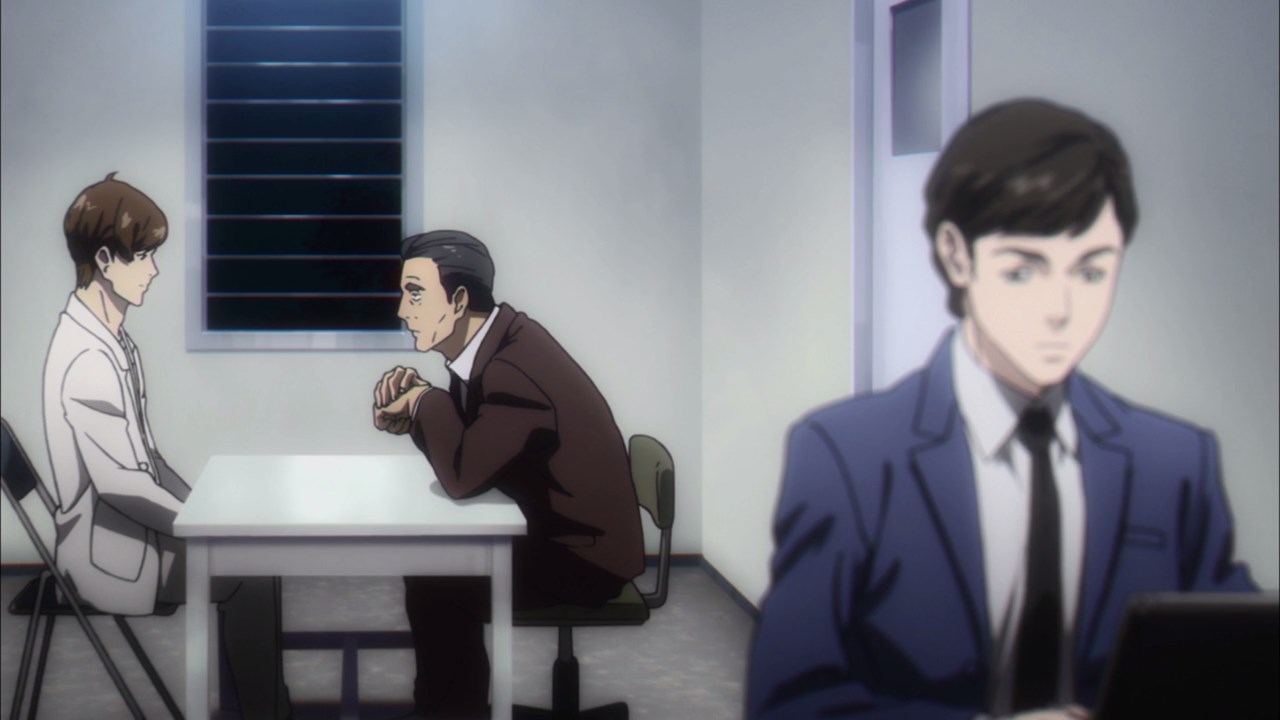 However, Jin Asukai told the truth to the police about what happened to Shizuko Imazaki, which is unfortunate as he could have stop Imazaki from committing suicide.

As for the police, they know who Shizuko Imazaki is, but they’re focusing on finding the ringleader instead of stopping Imazaki. 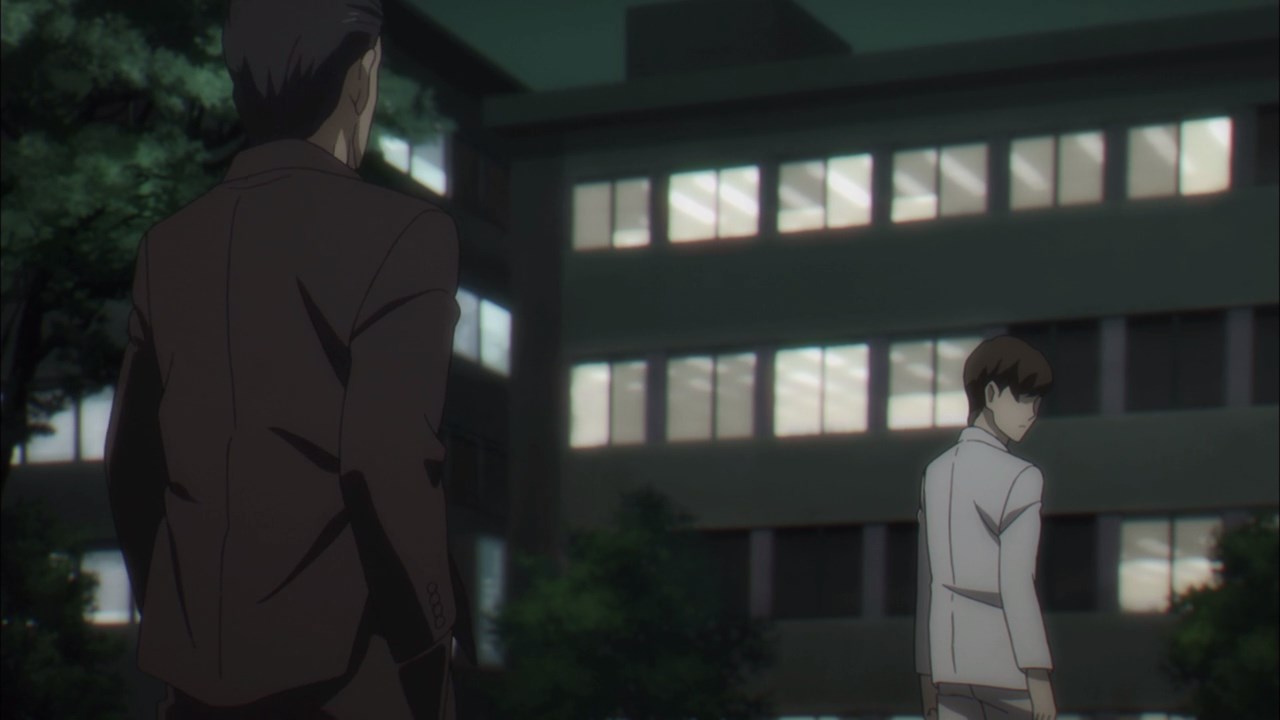 For the time being, the authorities let him go as Jin Asukai was cleared of murder charges. In any case, it seems that this story is over, right? 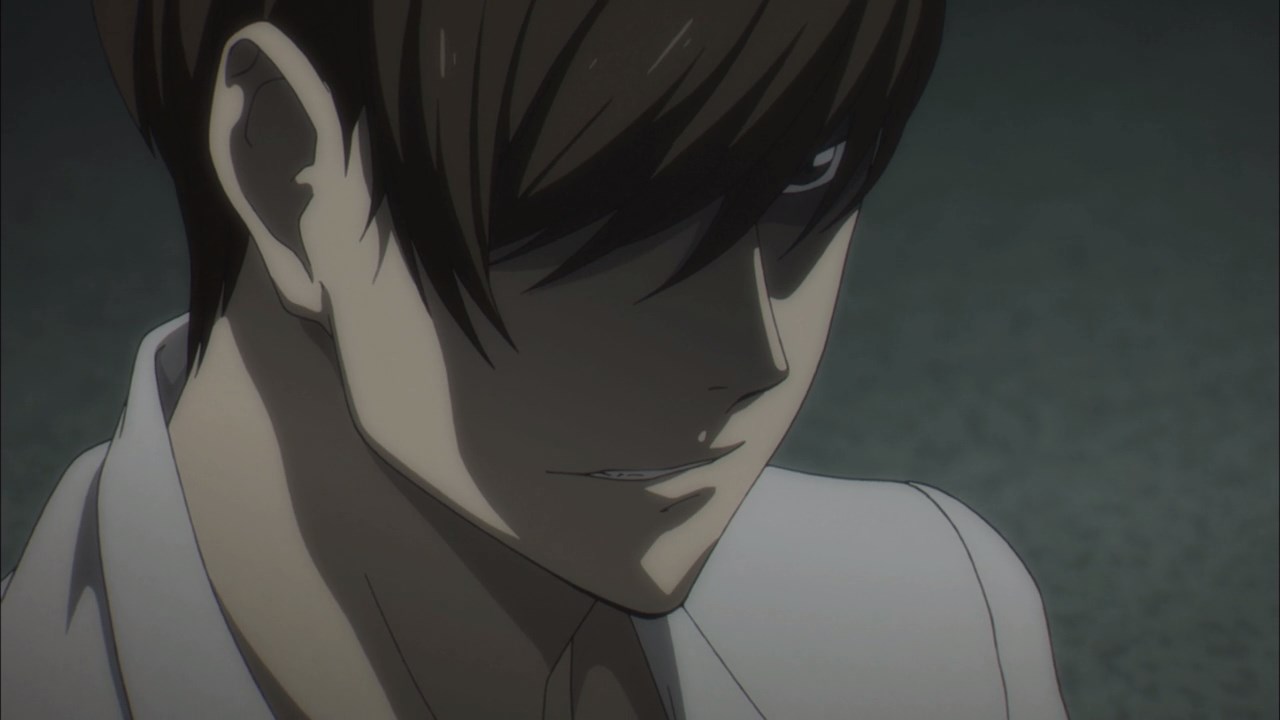 Not quite though. In fact, his face shows that Asukai is getting excited as I have a bad feeling that he’s gonna kill people for fun. Looks like Imaginator has unlocked Jin’s new calling. 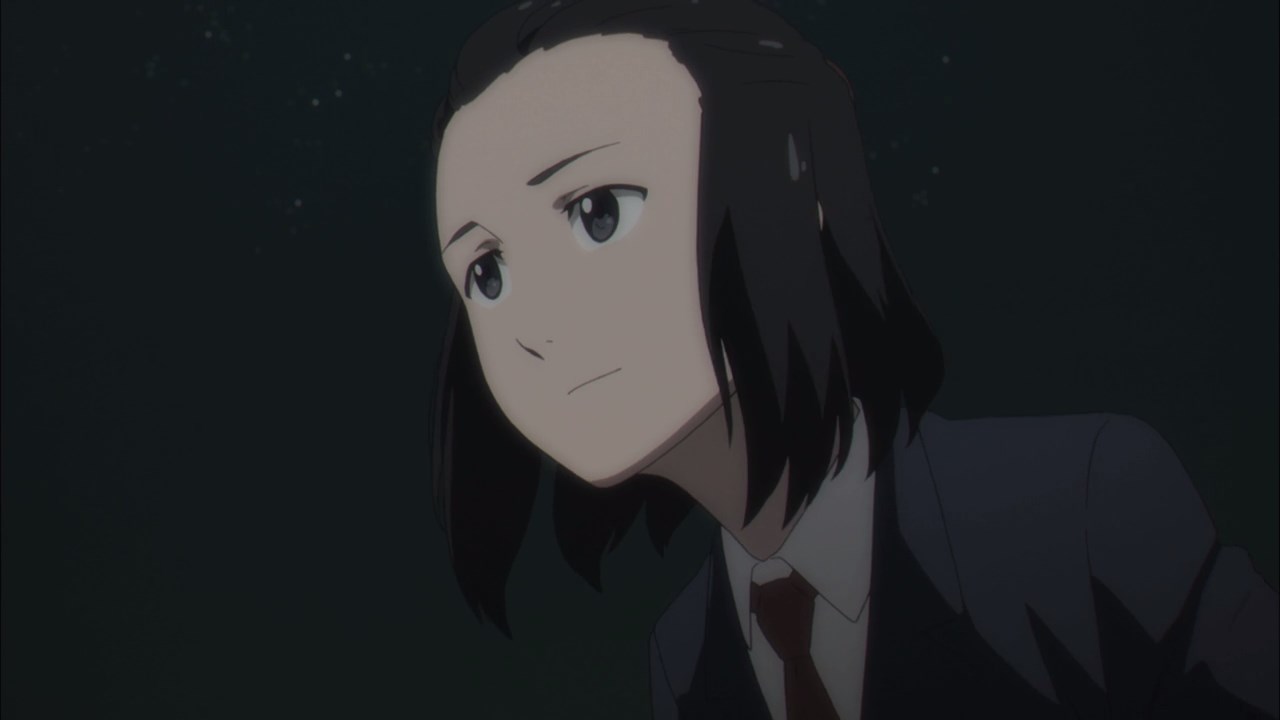 One last thing, here’s Mariko Komiya as she’s about to jump off from the rooftop and end her life much like her friend Suiko Minahoshi. 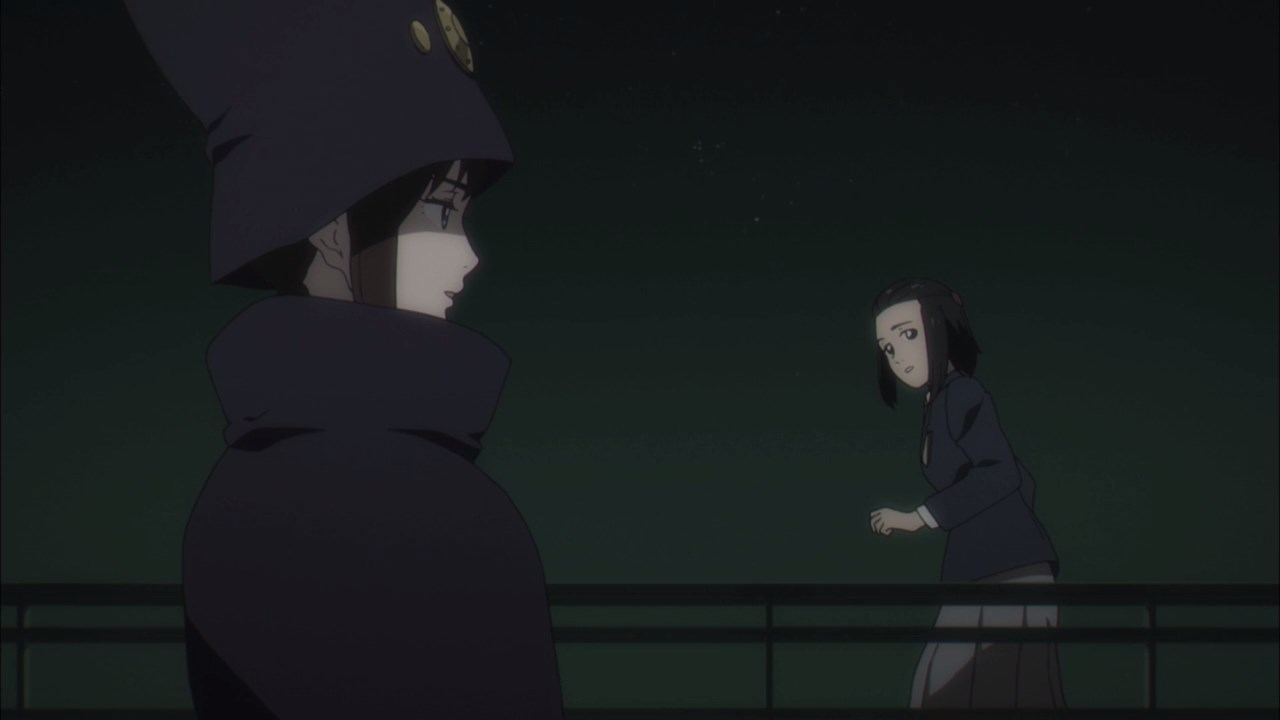 That’s until she was stopped by Boogiepop in which the grim reaper convinces Komiya not to end her life because it’ll be a waste for Boogiepop to take hers.

Fortunately, Mariko Komiya gave it another though and decided not to commit suicide. However, Boogiepop told Komiya that the grim reaper will bring Suiko Minahoshi to the afterlife, because it turns out that Suiko became Imaginator and it’ll be annoying if she manipulate these people to kill themselves or turn them into murderers.

With that said, it appears that Boogiepop will have to face a formidable foe as I’ll see you next time. Let’s hope that Imaginator or even Jin Asukai won’t succeed.