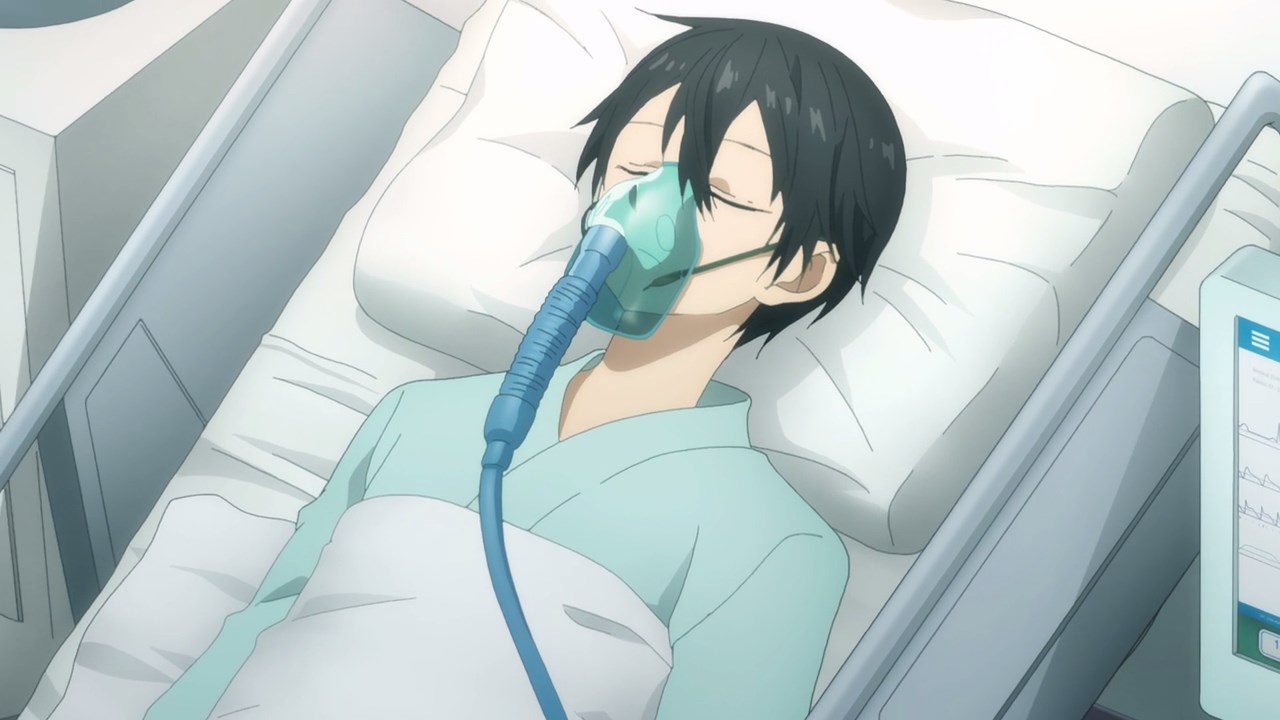 This is Kazuto Kirigaya, better known as Kirito as he was rushed to the hospital. Fortunately, his vital signs are okay for the most part… 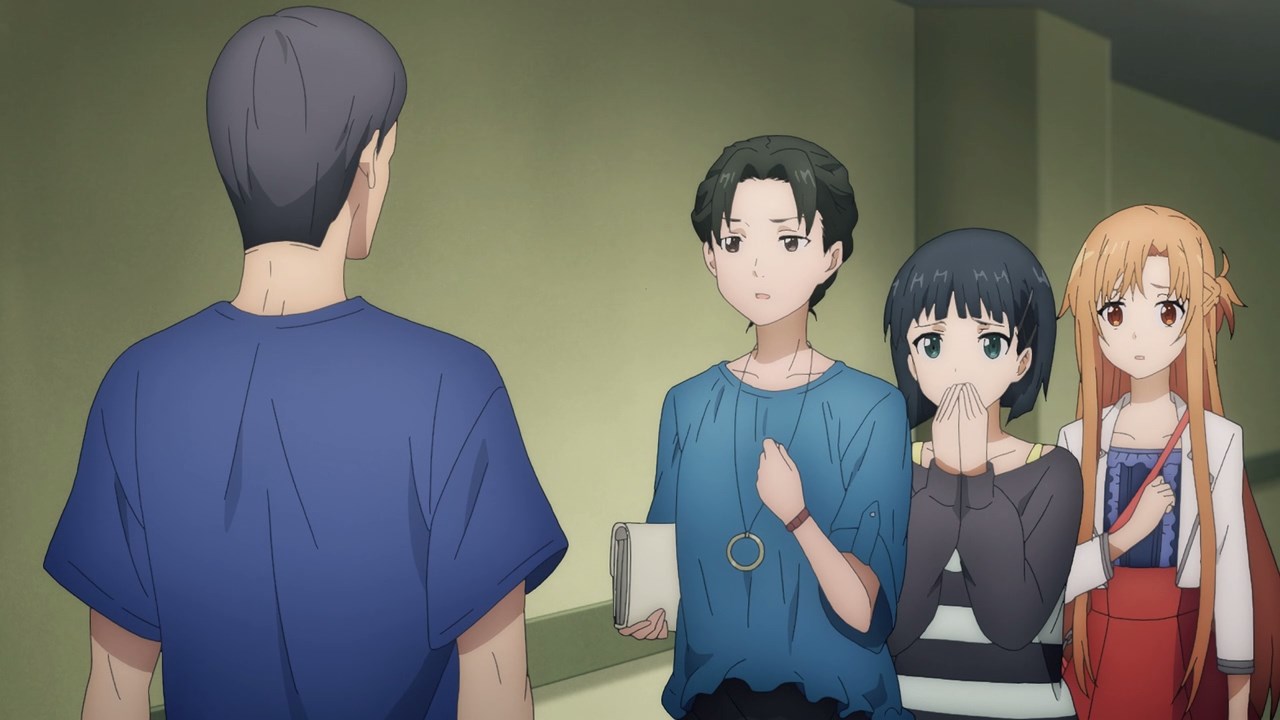 But because of that attack from one of the surviving Laughing Coffin members, his heart has stopped for more than 5 minutes according to the doctor and there’s a chance that he’ll never regain consciousness.

Basically, Kirito is stuck in the same predicament as Asuna during the Fairy Dance arc (and you know how terrible that story arc is), which is unfortunate as there’s no hospital that can revive him. 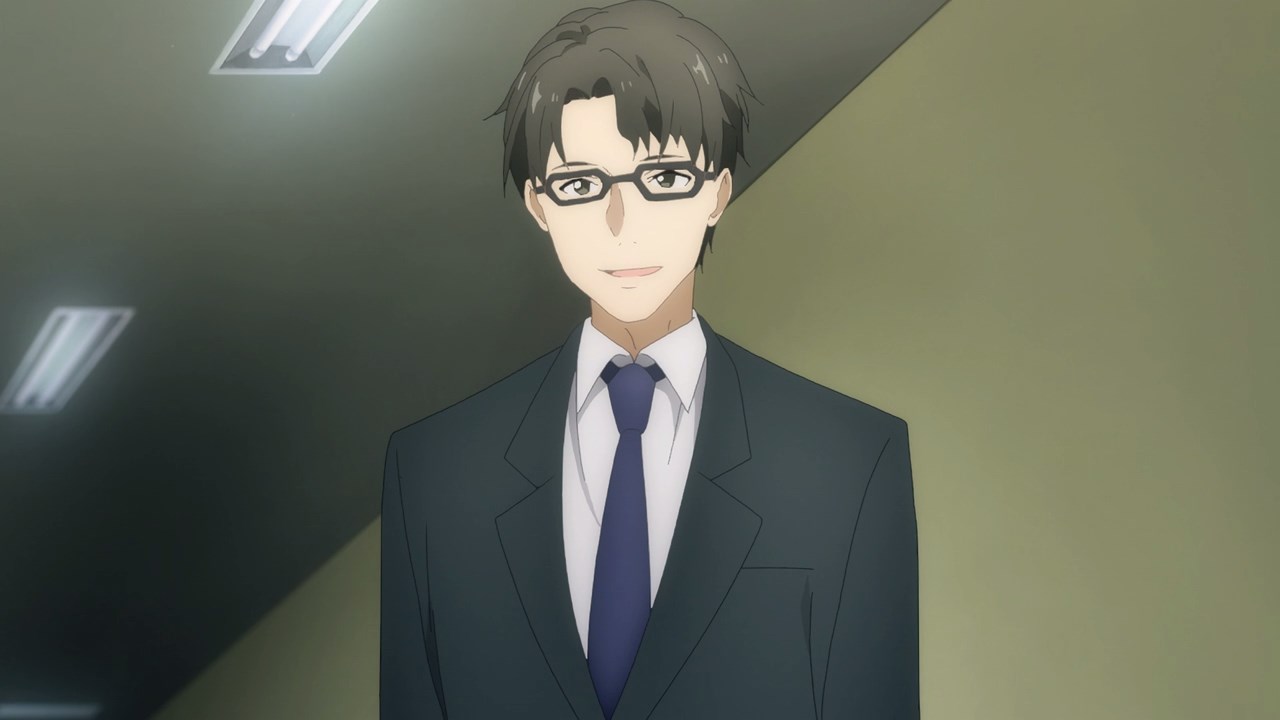 That’s until Seijirou Kikuoka appeared in which he offered the Kirigaya family a highly-advanced medical family to take care of Kazuto Kirigaya.

All they need to do is to sign the waiver and Kikuoka will handle it from there. 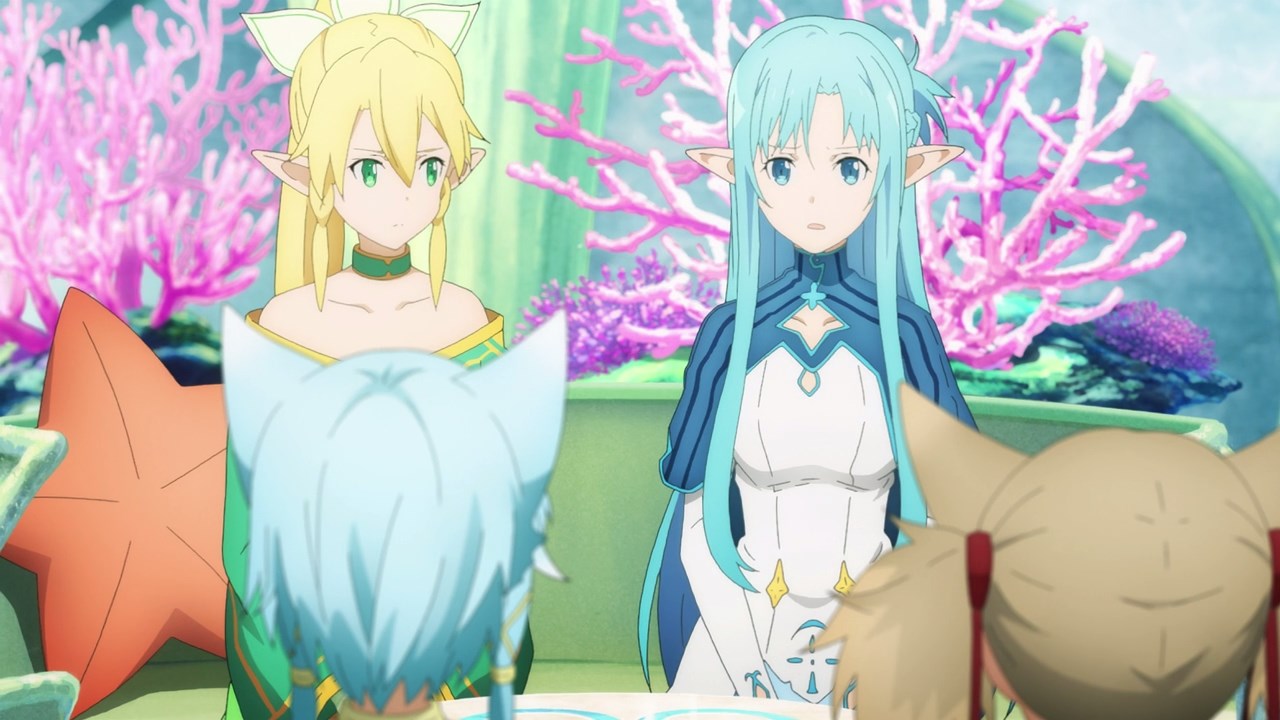 But once Midori Kirigaya signed the papers, Kirito disappears and Asuna is getting suspicious about it.

In fact, she deduces that it has something to do about his part-time job at Rath where Kirito tests the Soul Translator. In any case, Asuna asked them for help on finding a lead towards Kirito’s whereabouts. 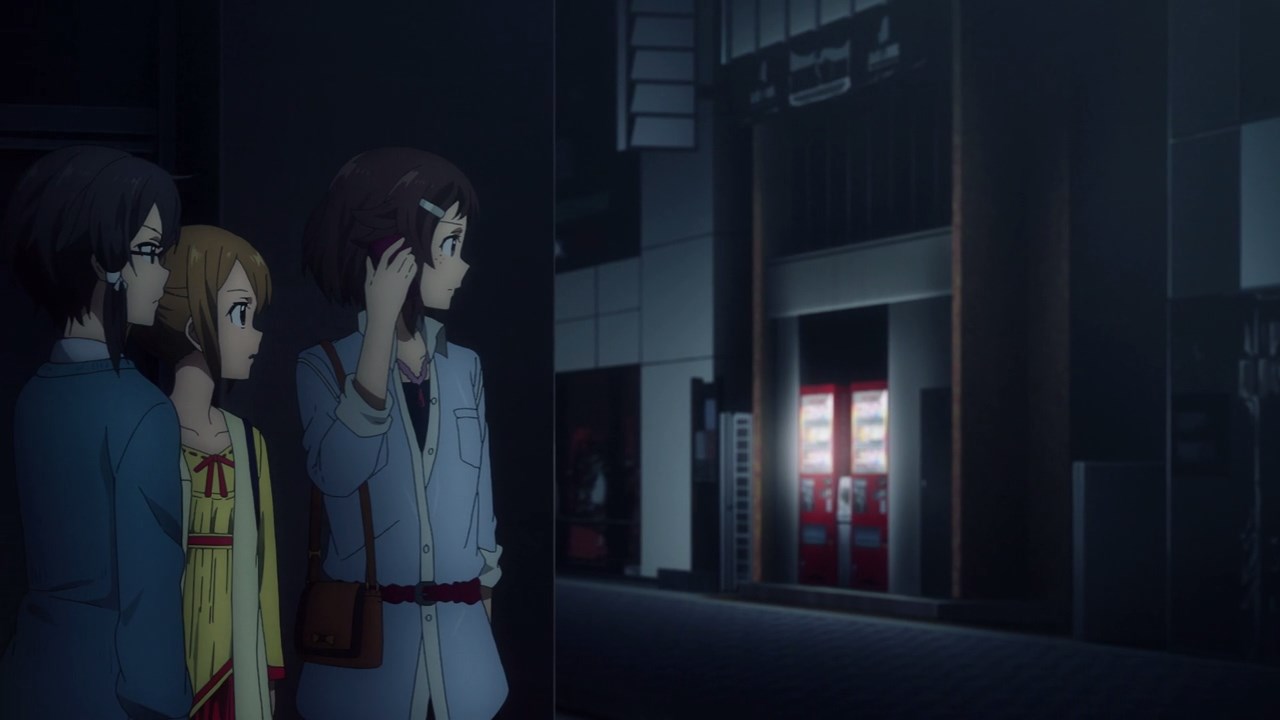 Unfortunately, it appears that finding Kirito won’t be easy as Sinon, Silica, and Lizbeth couldn’t get inside the Rath building due to heavy security. Basically, they’re out of luck. 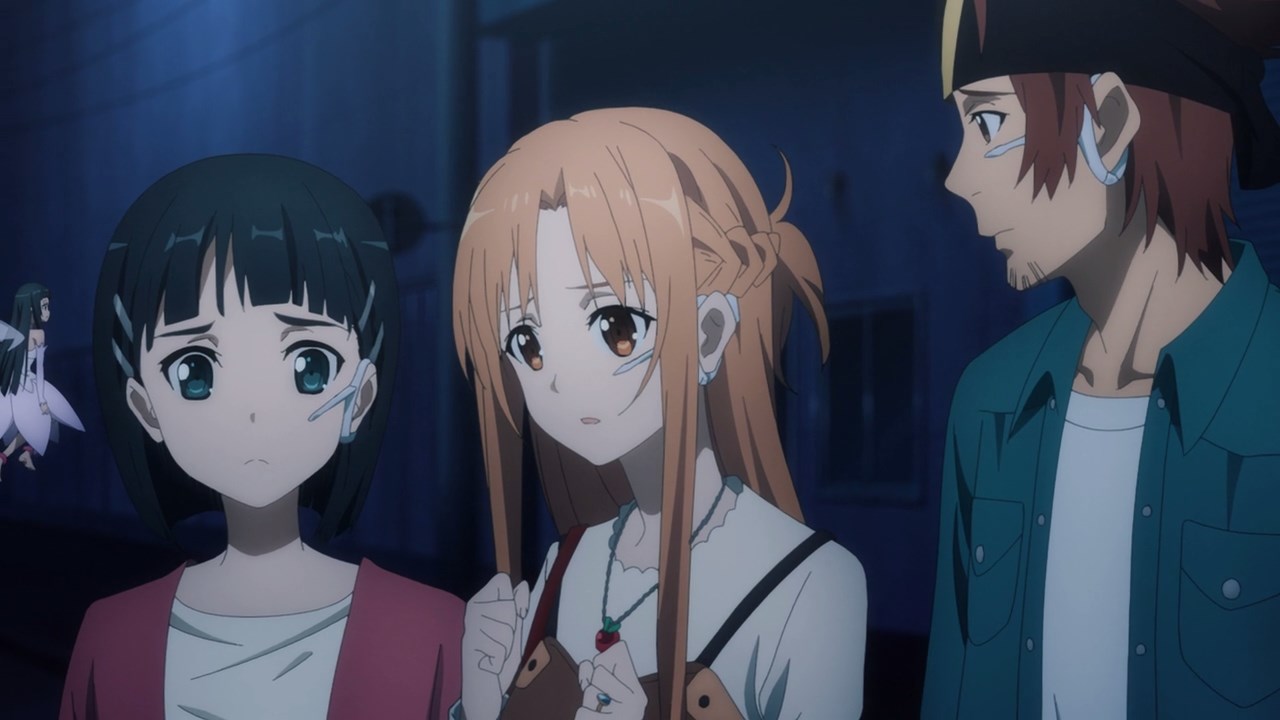 However, Suguha pointed out that Kirito used a machine at Rath that resembled one of Akihiko Kayaba’s inventions, the Medicuboid.

Suddenly, Asuna remembered that there’s a person who’s an acquaintance to Akihiko Kayaba, especially when it comes to the development of the NerveGear and various devices related to full-dive technology. That person turned out to be Rinko Koujiro as Yui found Rinko’s location where she’s working as a university professor in California, USA. 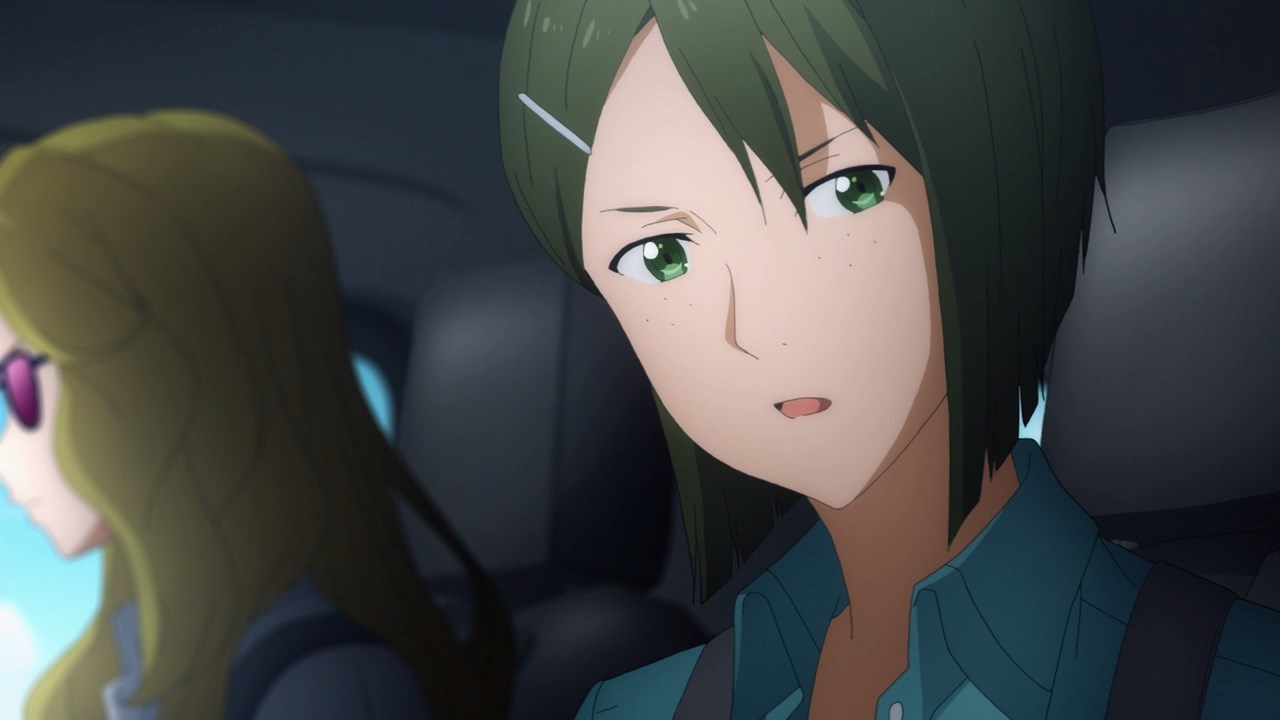 And here’s Rinko Koujiro as she’s invited by Rath to join the Soul Translator project. However, they told Koujiro that they’ll be conducting their project at a different site… 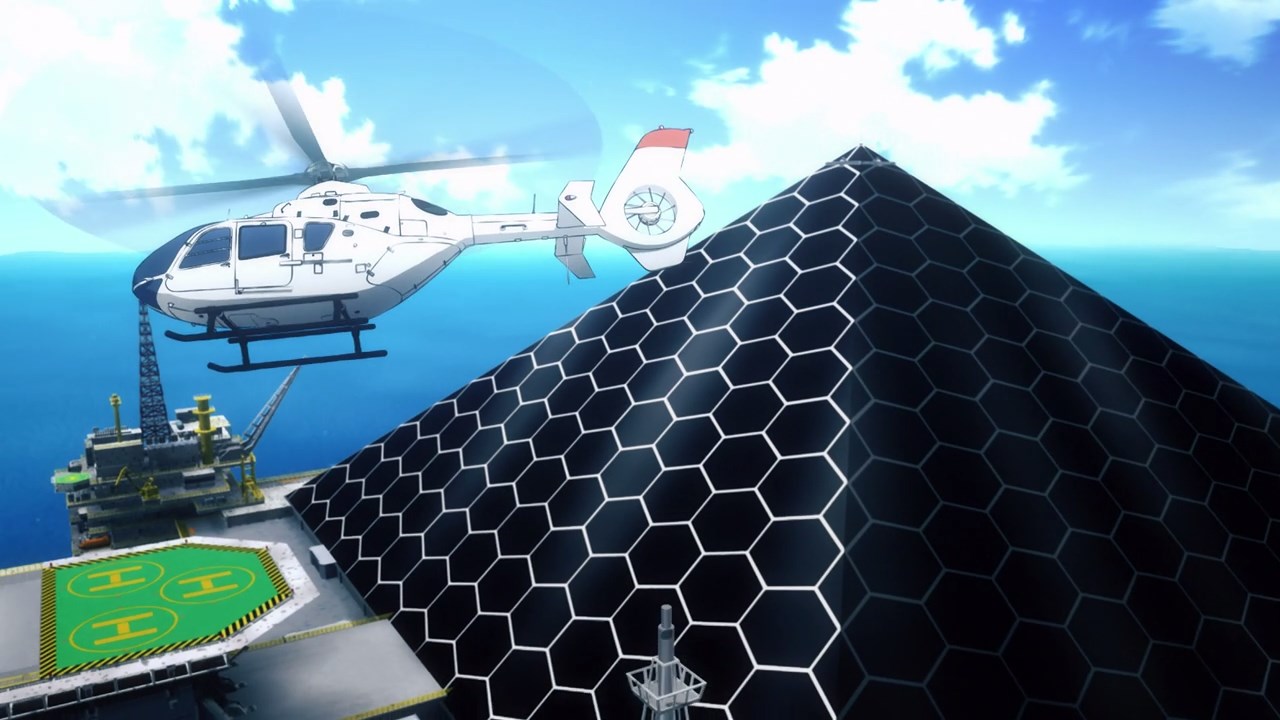 …which turned out to be this giant off-shore pyramid called Ocean Turtle. Yeah, it looks ominous to conduct research and development in regards to the Soul Translator. 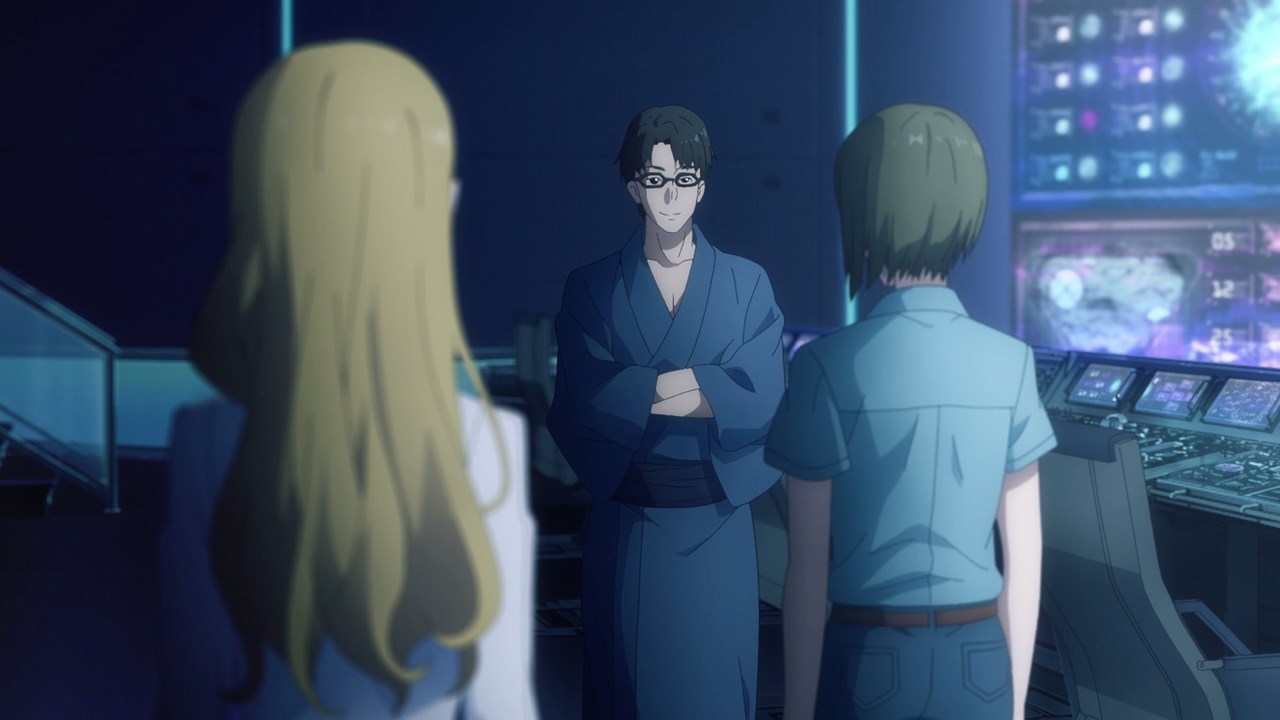 One more thing, it turns out that Seijirou Kikuoka is the one leading the project as he welcomes both Rinko Koujiro and her assistant Mayumi Reynolds. 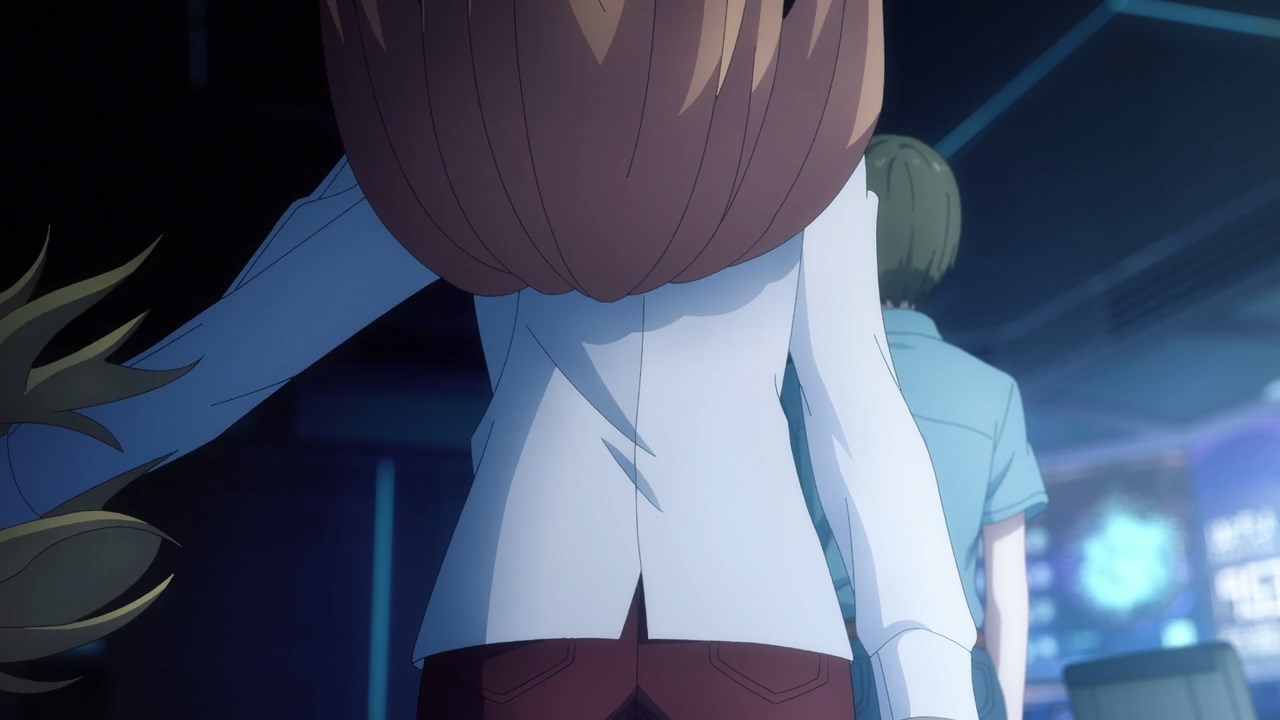 Except that Rinko’s assistant is not Mayumi Reynolds as the real one is currently working her tan at a beach somewhere in America. 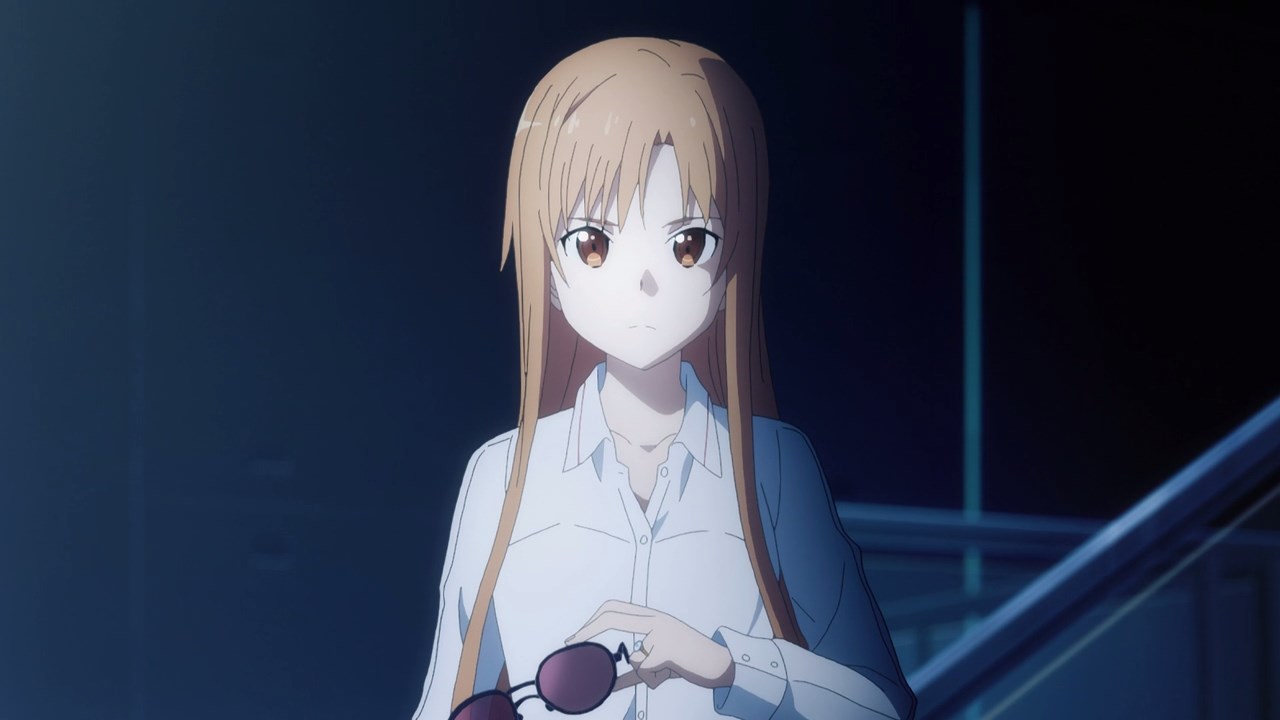 In any case, here’s Asuna Yuuki as she asked Seijirou Kikuoka two questions. One, Kirito’s whereabouts. And two, the truth behind the Soul Translator.

While Kikuoka-san told Asuna to wait in regards to Kirito’s whereabouts, he can answer the second question. 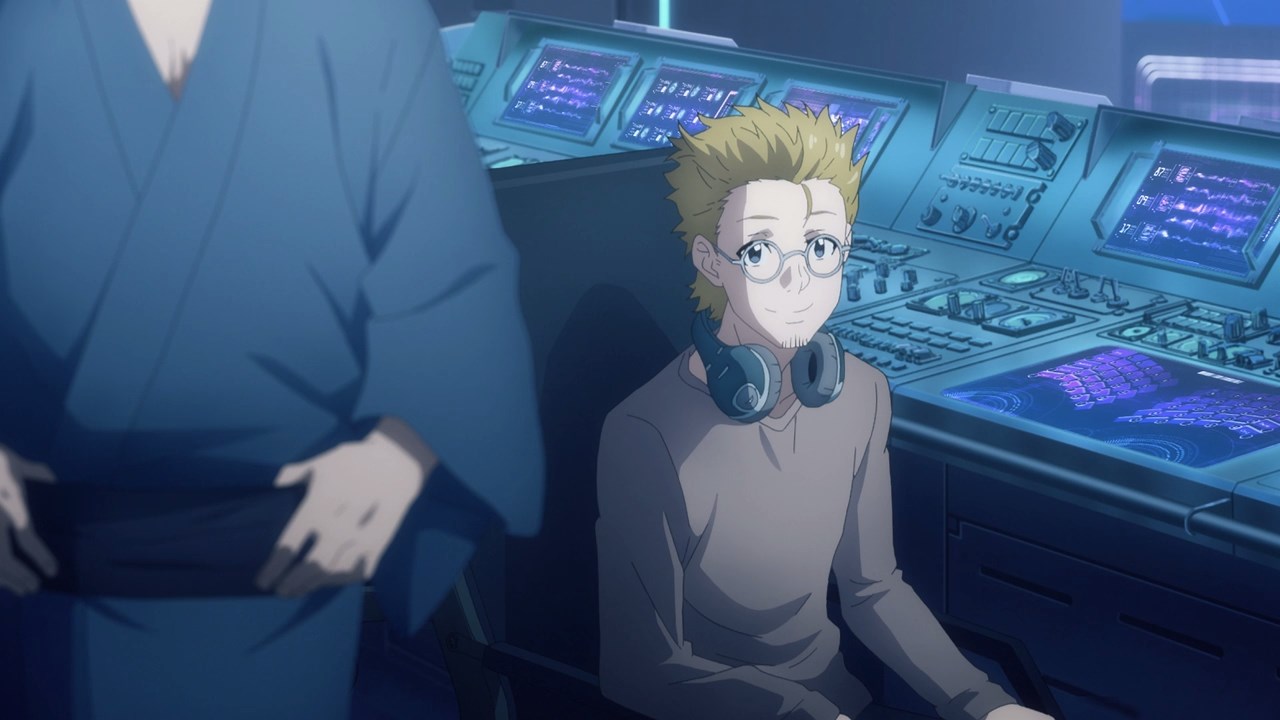 And with that, Seijirou Kikuoka brought one of Prof. Tetsuhiro Shigemura’s students Takeru Higa on board as he demonstrates the Soul Translator’s capabilities and its goals. 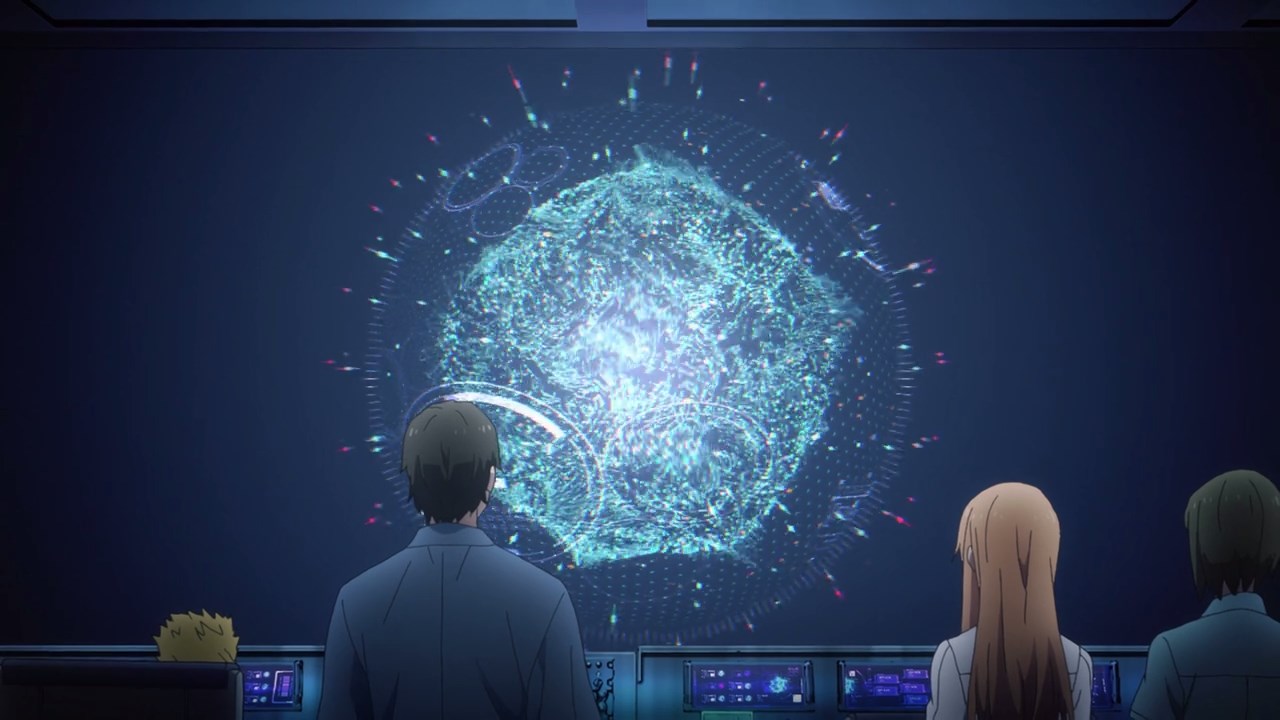 Anyways, what you’re seeing here is an AI representation of Takeru Higa in which the real one made a clone of himself by scanning his consciousness or what Higa called as Fluctlight. Hence the device is named Soul Translator, and Takeru Higa created it in order for him and the rest of Rath to develop a highly-adaptive artificial intelligence using a human brain as its core.

Basically, what they’re doing is creating an artificial human soul from scratch and an evolution from Prof. Shigemura’s idea of creating a human-like AI. However, it’s not like they’re gonna create a soul and call it a day as they’ll raise these artificial Fluctlights by giving them a space to cultivate and propagate until they created a civilization. Hence, the existence of the Underworld in which Kirito currently lives in. However, Seijirou Kikuoka worried that the artificial Fluctlights are so perfect that they can’t commit crimes because they created laws that forbid them to do so. 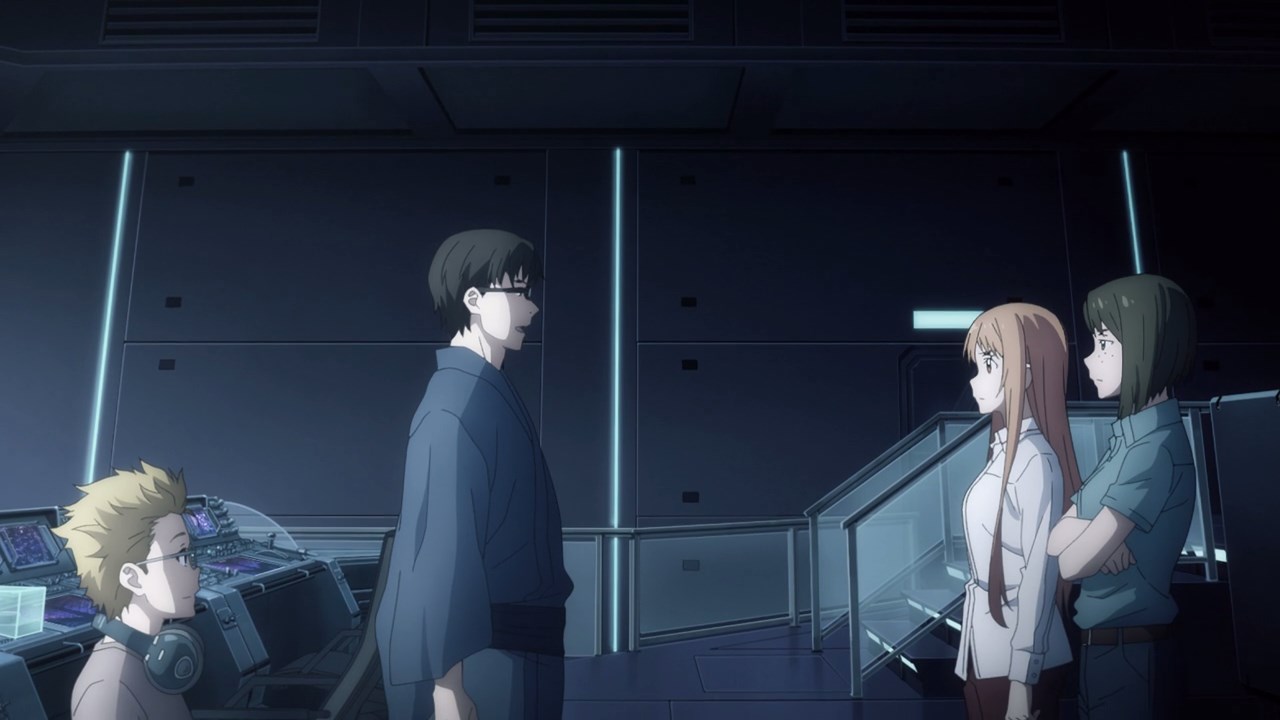 And this is where Kikuoka’s true intention lies as he and his team wanted to create an artificial Fluctlight that can commit murder. Up until now, the artificial Fluctlights in the Underworld are abide by the laws created by the Axiom Church called the Taboo Index. However, a certain Fluctlights named Alice broke the Taboo Index and thus Kikuoka and his team realized that a Fluctlight that can commit crimes is a possibility, thus they brought Kirito on board as he has the experience when dealing with malicious people in the virtual world.

One last thing, he forgot to mention that thee name of the project is Alicization, which is not only a nod to Lewis Carroll’s Alice in Wonderland but its acronym A.L.I.C.E. (or Artificial Labile Intelligent Cybernated Existence) is somewhat of a shout-out to Gundam Sentinel. Come to think of it, I feel that this project might be centered around Alice Schuberg. 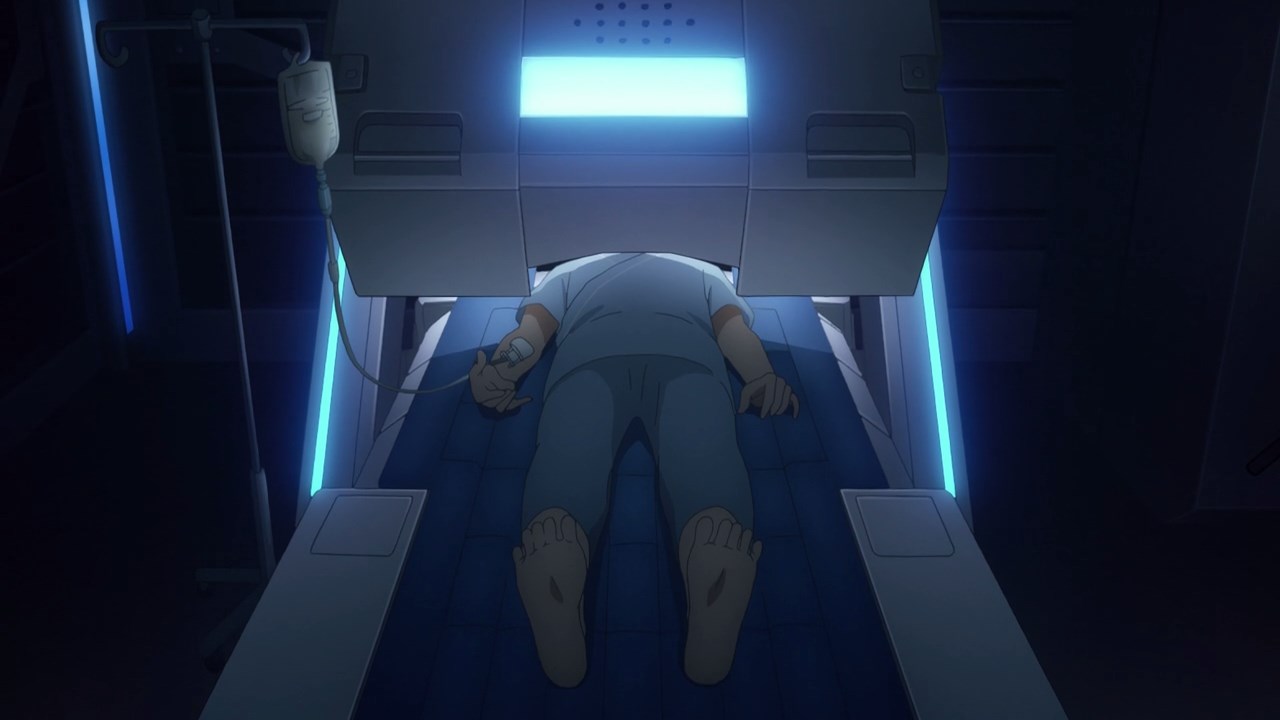 Now that he’s done explaining the true aim of Project Alicization, it’s time for Seijirou Kikuoka to show where Kirito is and as you can see, he’s currently hooked-up in the Soul Translator.

Kikuoka explains that it’s the only way for Kirito to regain consciousness by copying his soul and live in the Underworld until he can find his way back. 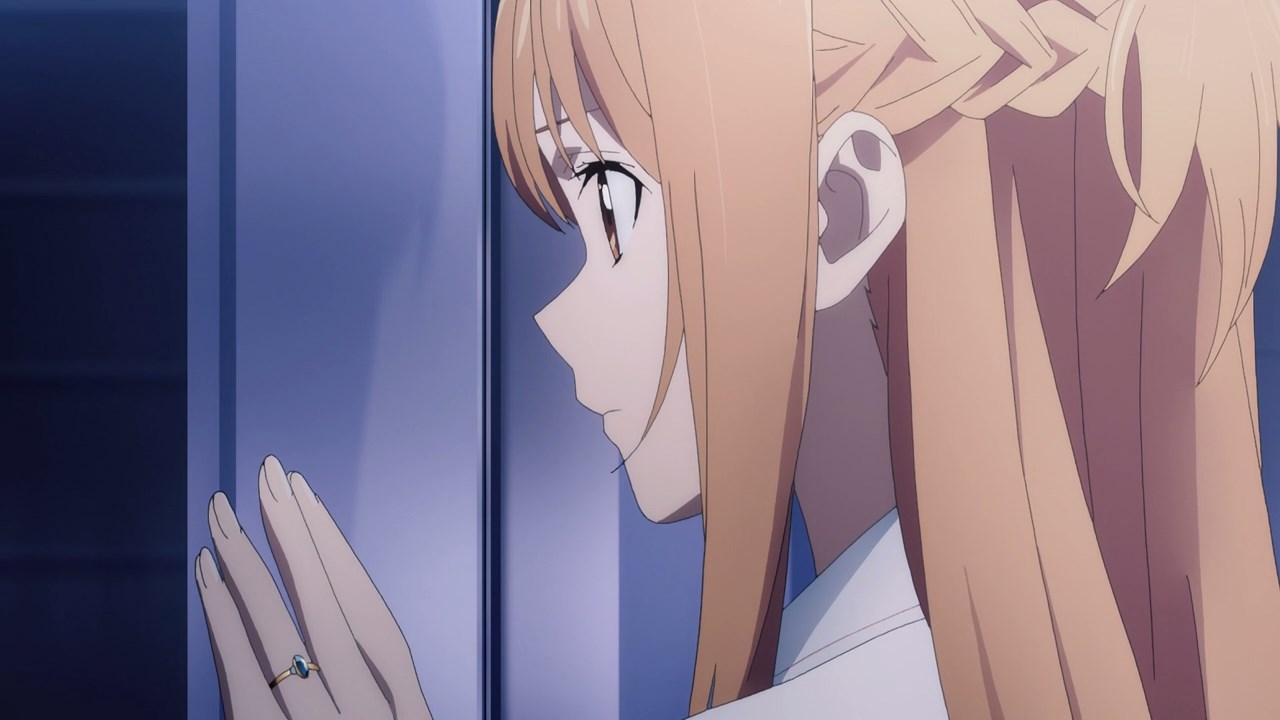 Of course, it’ll be a long time for Kirito to get back to his senses. And with the the facility only have 4 working Soul Translator with 2 under construction at the Rath headquarters in Roppongi, it’ll be difficult for Asuna to find a slot and get inside the Underworld.

Until then, Asuna will have to wait until Kirito wakes up. Sucks that their wedding plans will be postponed for the time being. 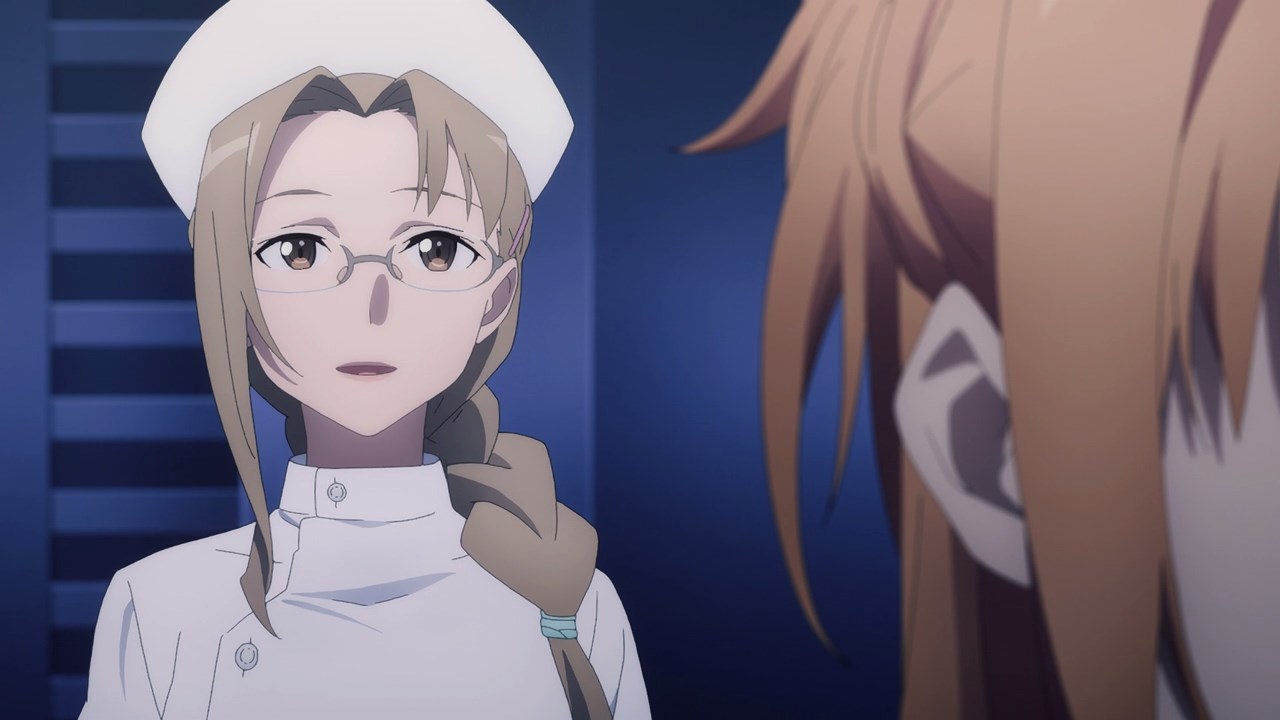 Oh and as for Kirito, he’ll be taken care of by Natsuki Aki. You might probably seen her during the Phantom Bullet arc, but this nurse is actually enlisted in the Japanese Self-Defense Forces much like Seijirou Kikuoka.

Of course, Natsuki Aki won’t do anything shady when Kirito is unconscious as she’ll monitor his health unless Nurse Aki encountered an illness that might threaten his life. 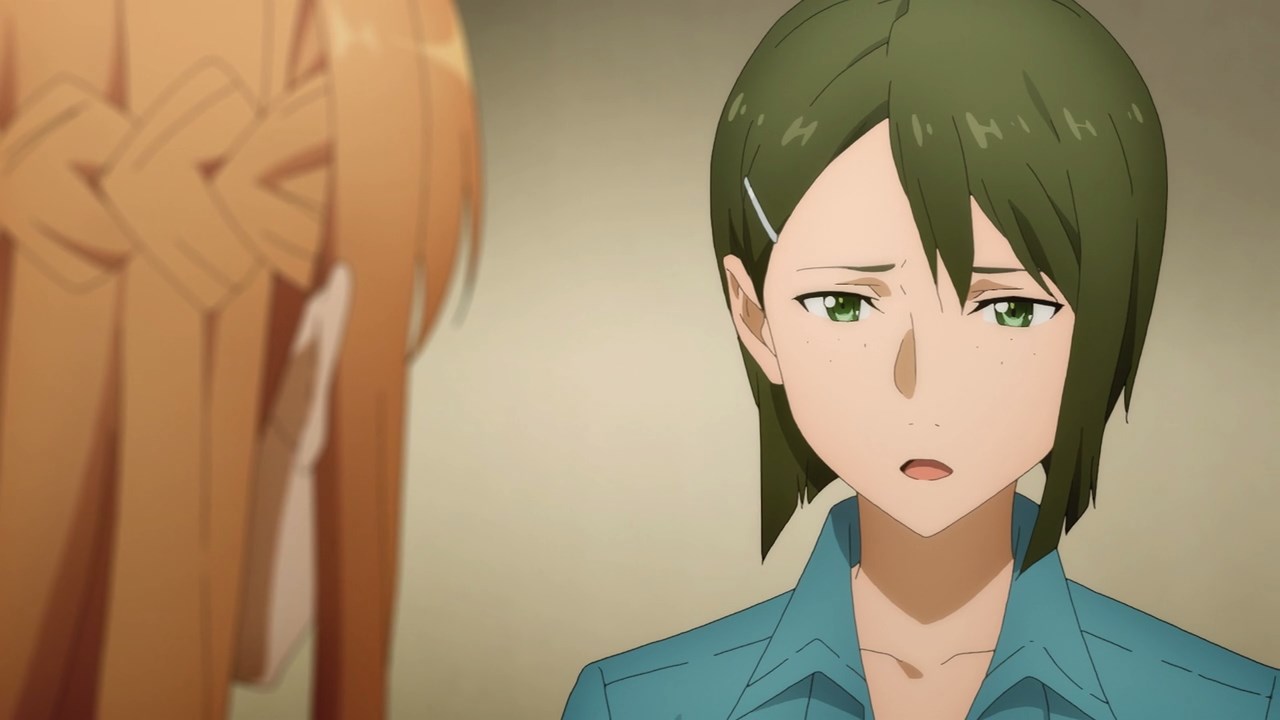 One last thing, here’s Rinko Koujiro and while she’s a former love interest to Akihiko Kayaba, Rinko is also a collaborator to his plans of trapping thousands of players in Sword Art Online until they clear the game.

However, Koujiro wanted to stop Kayaba’s plans by killing him and found a way to free the trapped players. 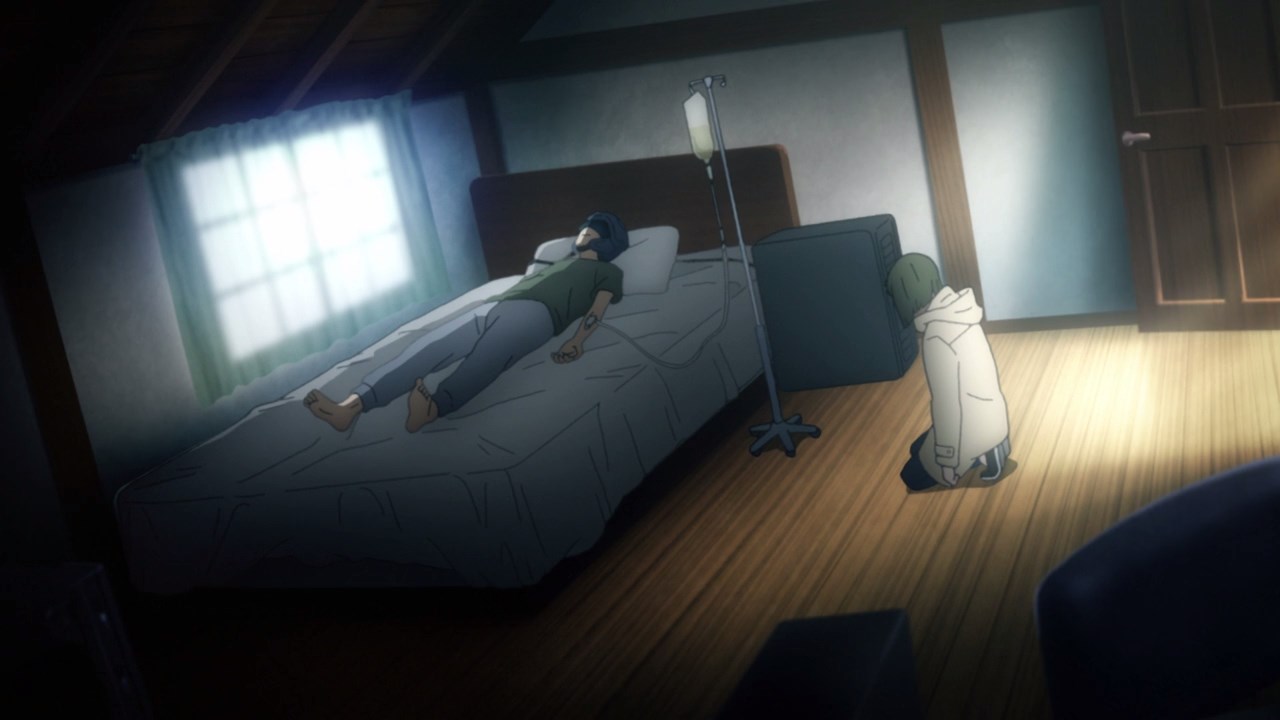 But, Akihiko chose to enter SAO and end his life there. I think the reason why he did this is because Kayaba doesn’t want Rinko Koujiro to become a criminal like him. And yet, she blames herself for the incident that claimed hundreds of lives during the SAO incident. 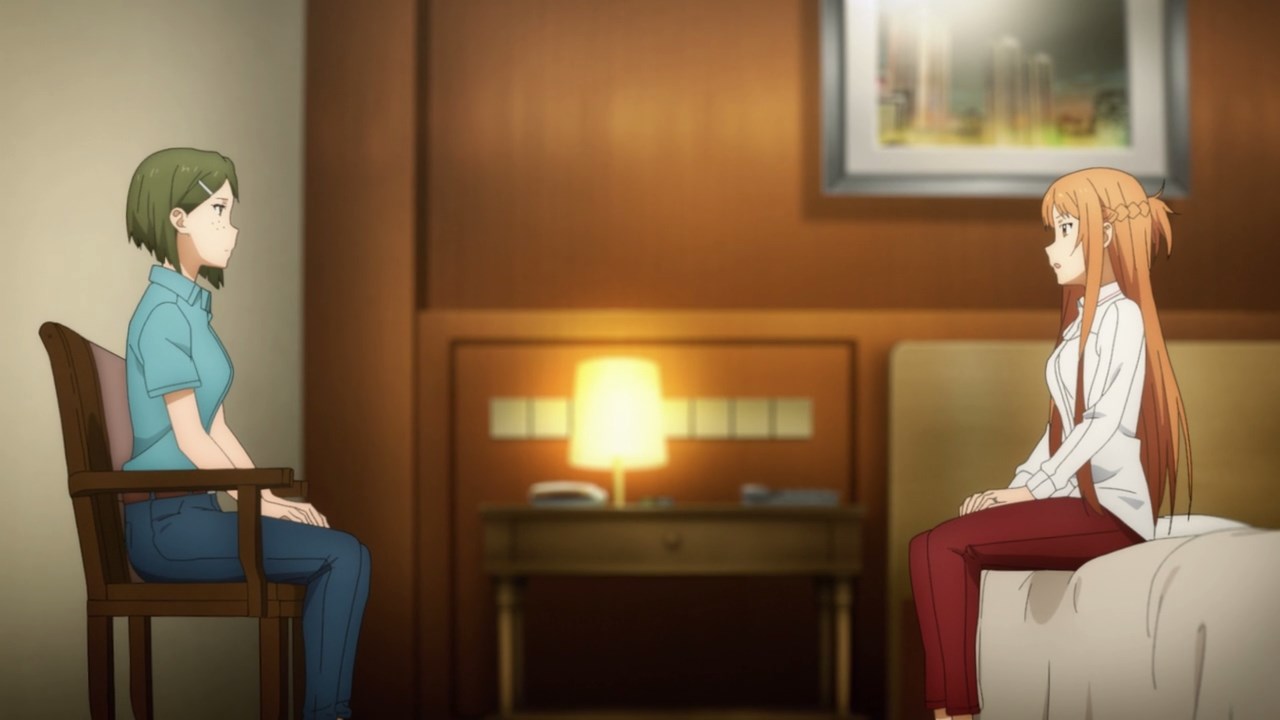 Fortunately, neither Kirito nor Asuna had any grudge towards both Rinko and Akihiko in regards to the SAO incident. Even though it’s unfortunate that many lives are lost in Sword Art Online, Asuna treasured those days spent with Kirito as she told Koujiro to move on and continue to face on what they done during the incident.

In any case, that’s about it for these two episodes of Sword Art Online: Alicization. While I know about the true purpose of the Alicization Project and Kirito’s whereabouts, my concern is what happened to Tetsuhiro Shigemura as he was recruited by Seijirou Kikuoka at the end of Ordinal Scale?

With that said, I’ll see you next time as we’ll return to the Underworld where Kirito and Eugeo will go to Centoria to become swordsmen.