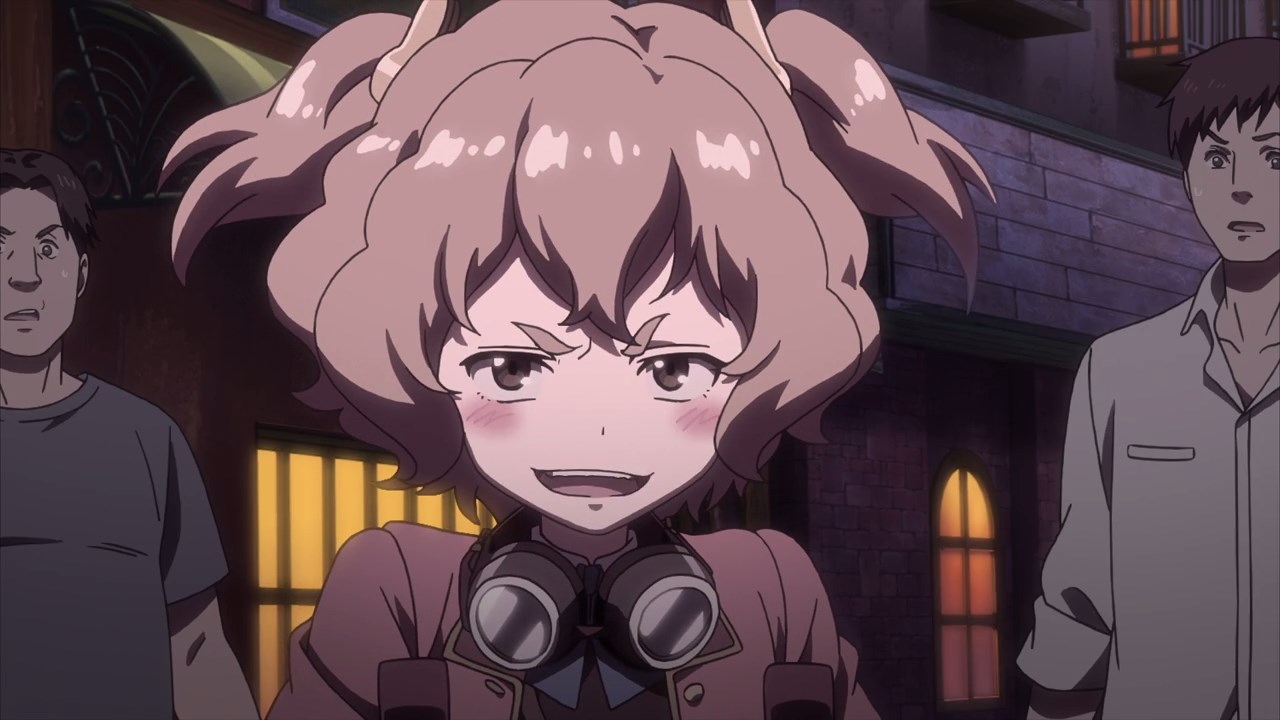 Well look what we have here, it appears that we’ll have a new character introduced on this 2nd episode.

Meet Chika, the 6th member of the Kotobuki Squadron who was not there in Episode 1 as she’s recovering from a leg injury. 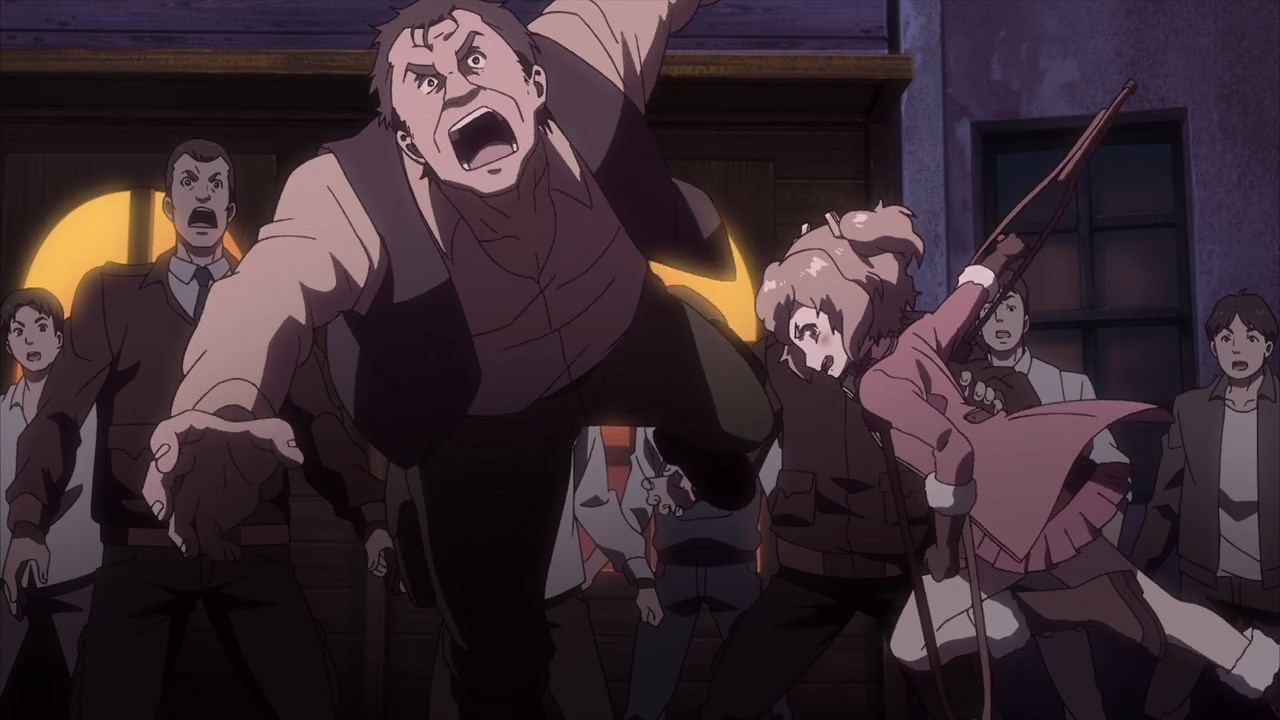 Then again, Chika got in a fight against a male pilot by whacking him with a crutch. Gotta say that despite being discharged from the hospital, Chika is seeking trouble which is not good for her squadron. 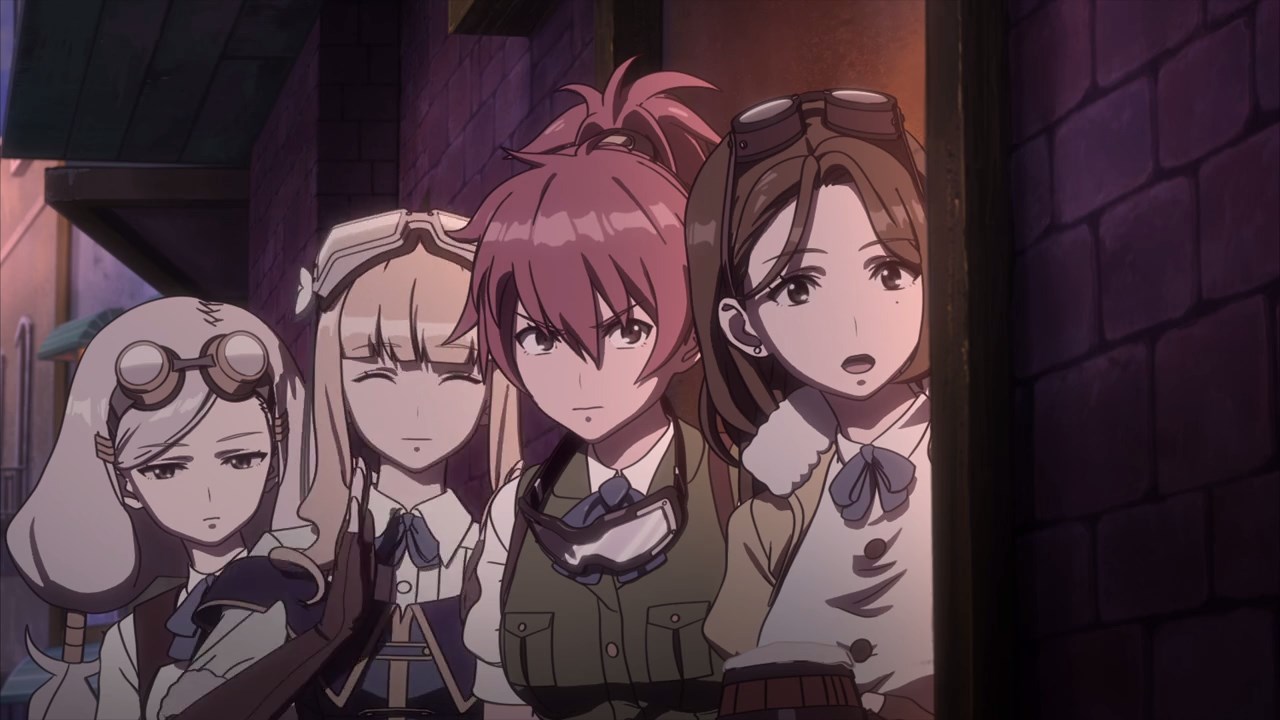 Heck, even her squad-mates couldn’t believe that Chika returned only to pick up a fight against someone.

Well then, looks likes Reona will have to break it up and punish Chika for her insubordination. 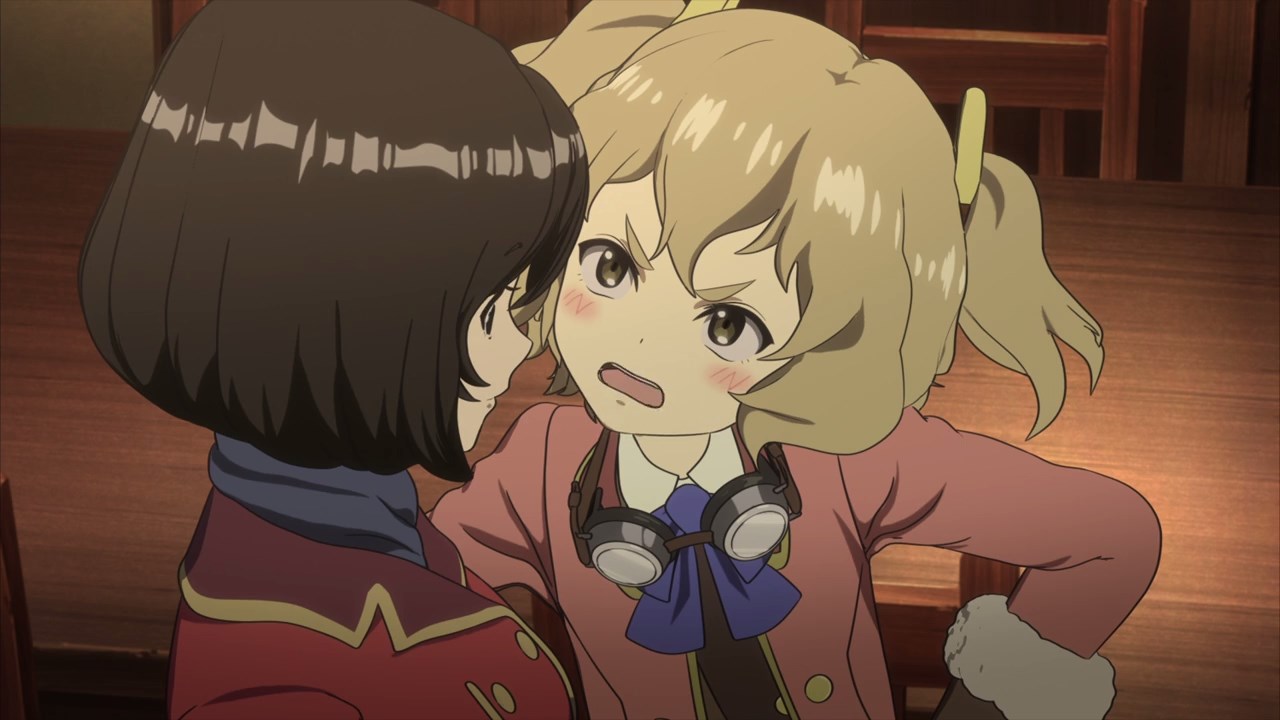 Even if she got punished by her actions, seems that Chika wants to pick a fight with Kirie of all people. 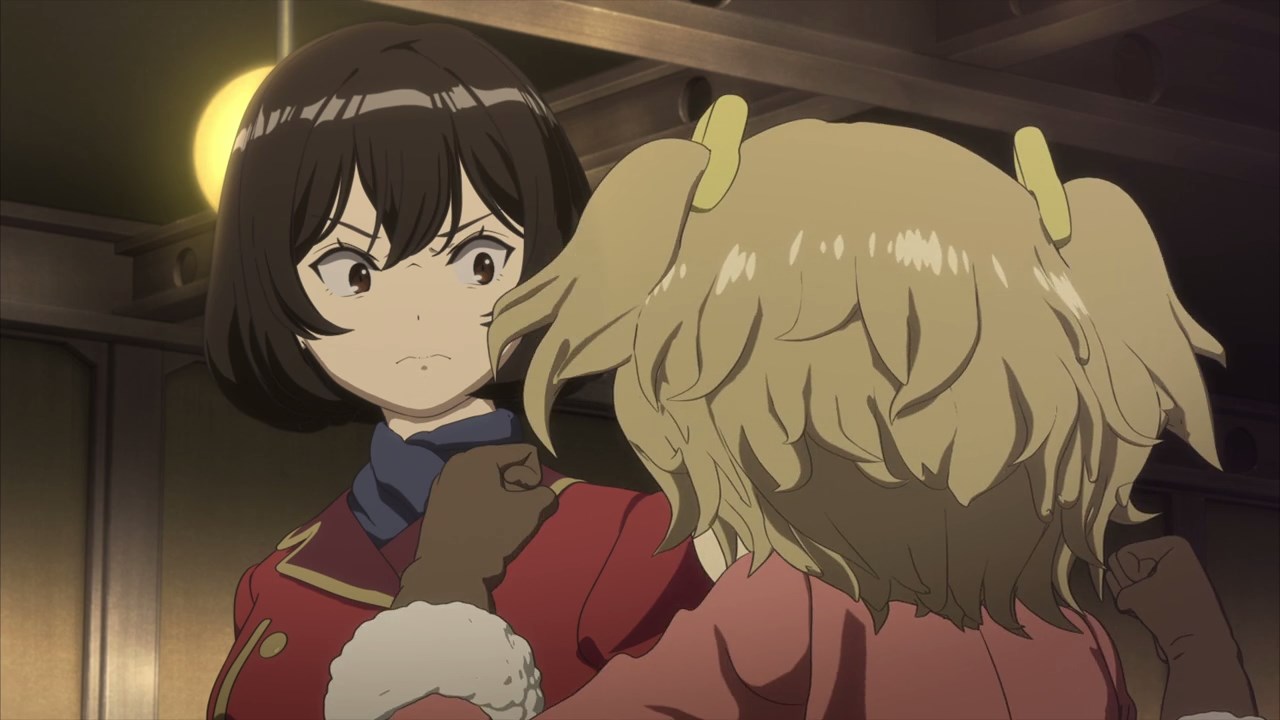 And really, they hate each others guts with Kirie accused Chika of deserting a mission, Chika mocking Kirie’s lousy kill count, etc. 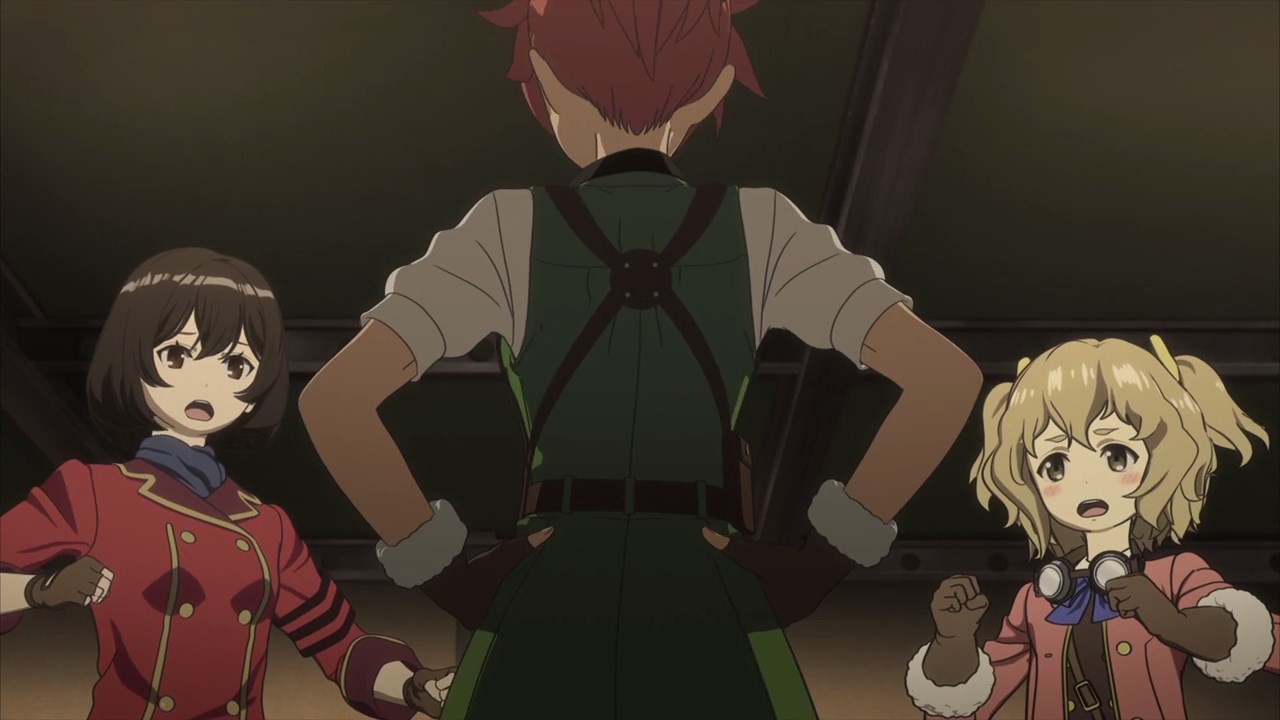 Unfortunately for both Kirie and Chika, Reona had enough of their banter as she lashes both pilots to get them in line. C’mon, she doesn’t want rowdy pilots getting their emotions flared up that would ruin a mission. 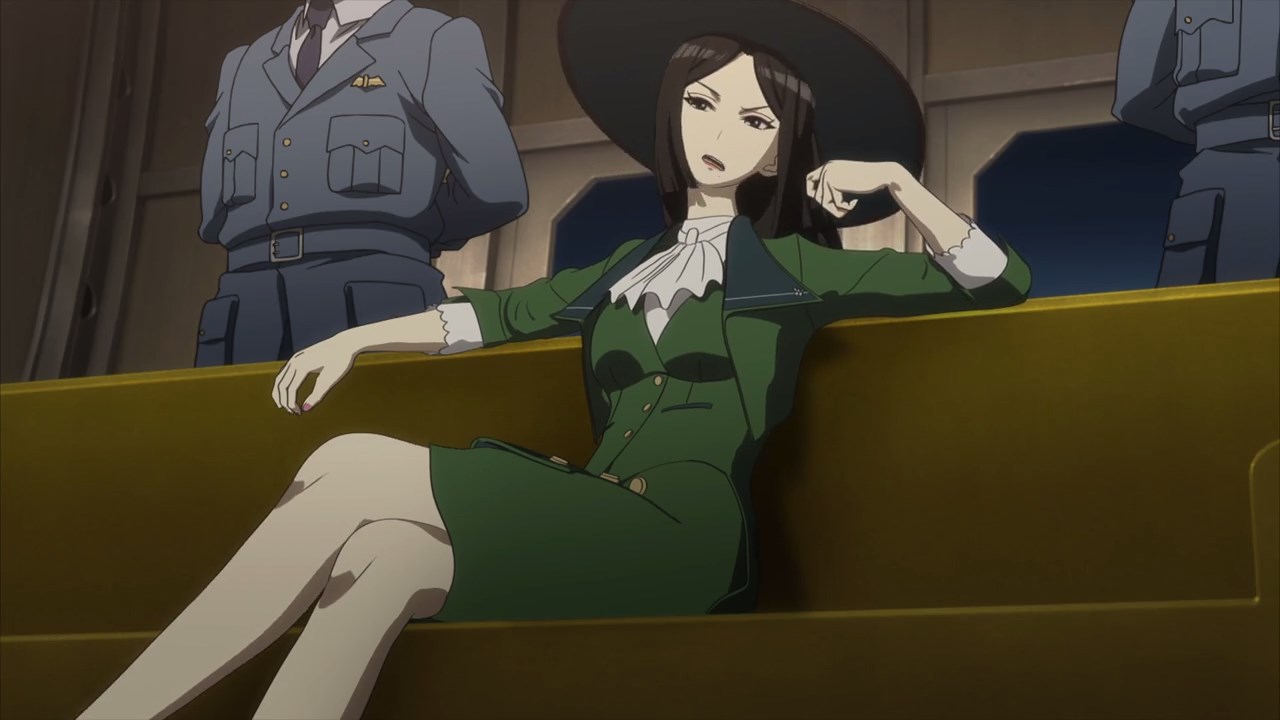 Now then, let’s move on the main story for this episode as the Kotobuki Squadron was recruited by a councilor named Julia.

While she’s the most important person who pushed reforms so that former pirates can have normal jobs, her brash attitude has made lots of enemies. 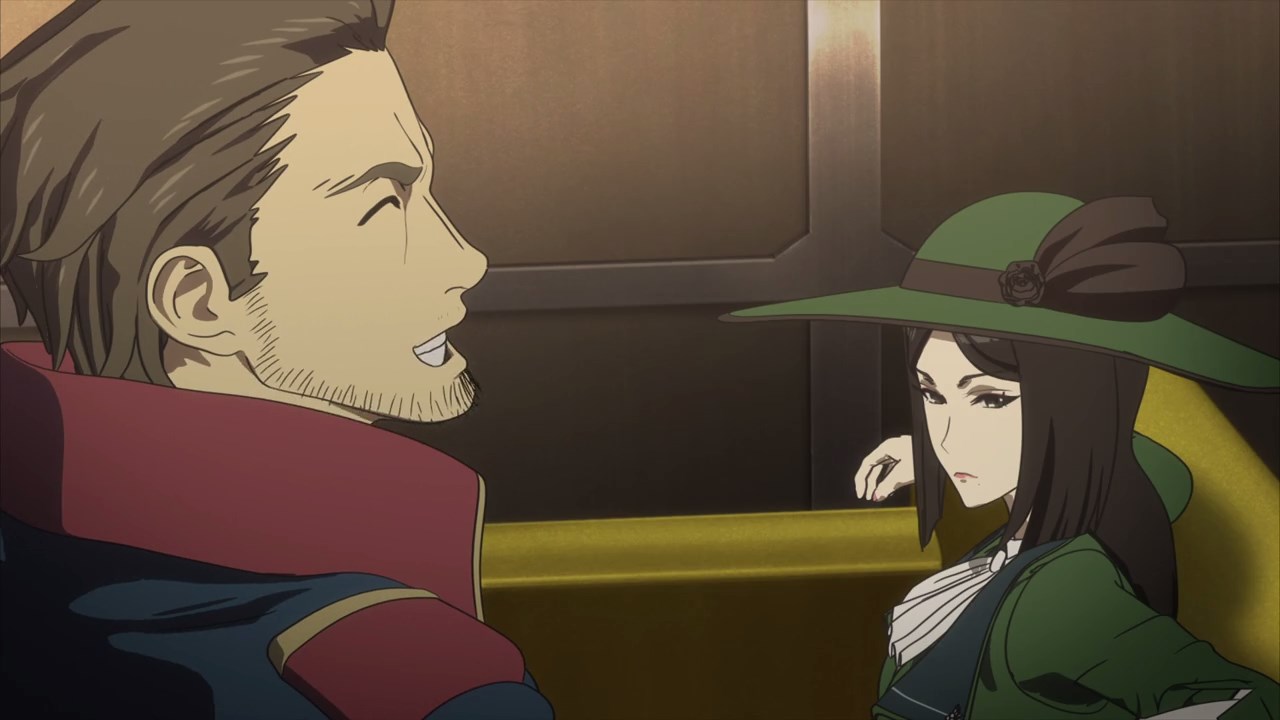 Hell, she won’t even spare on anyone including Commander Saneatsu as Julia roasts him for being pathetic. Don’t worry, Saneatsu is a good commander. 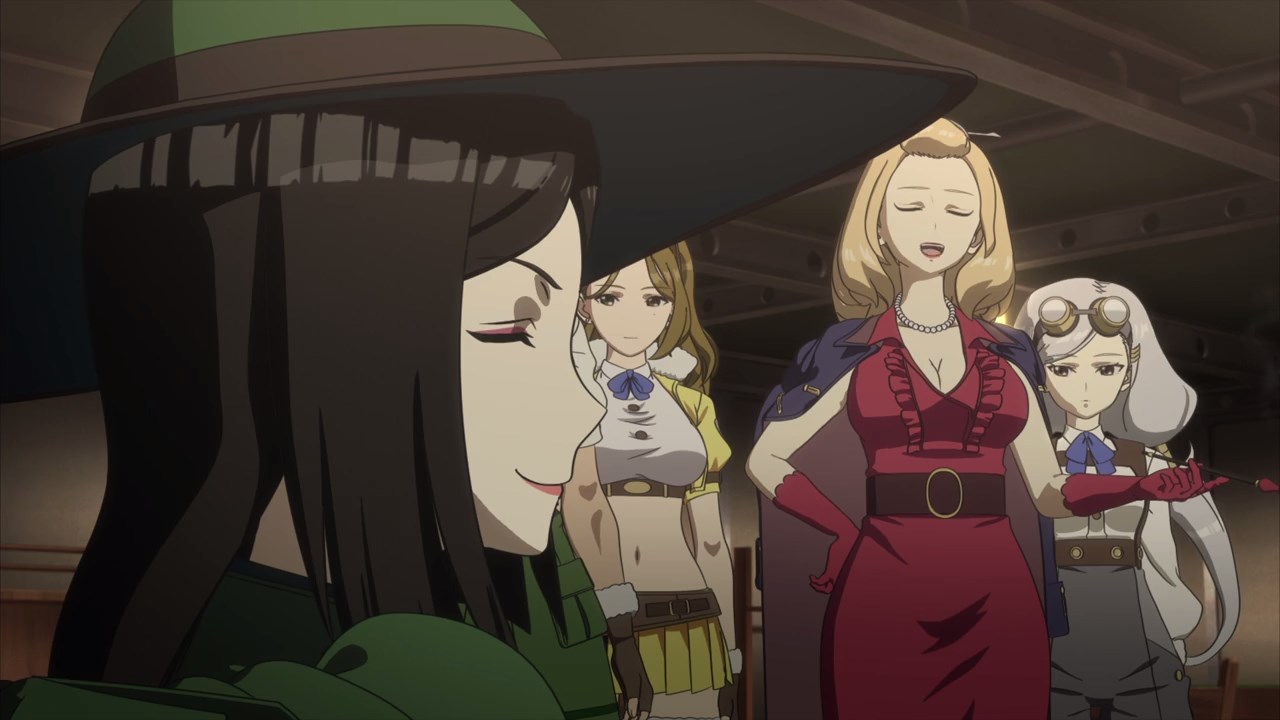 Oh yeah, I forgot to mention the owner of Kotobuki Squadron who’s known as Madame Lulu. By the way, both Julia and Lulu know each other and they really hate their guts. 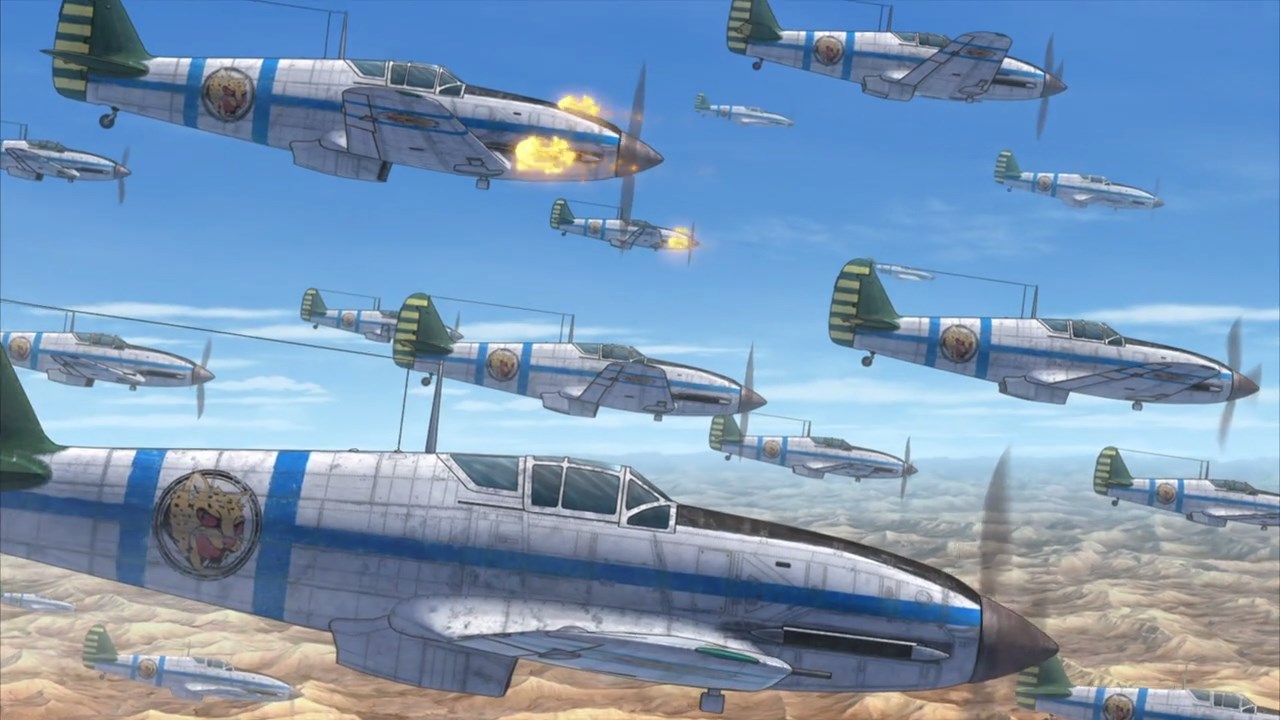 Now then, it’s time for the Kotobuki Squadron to escort Councilor Julia to Gador. Of course, Kirie and the rest must fend off pirates as usual. 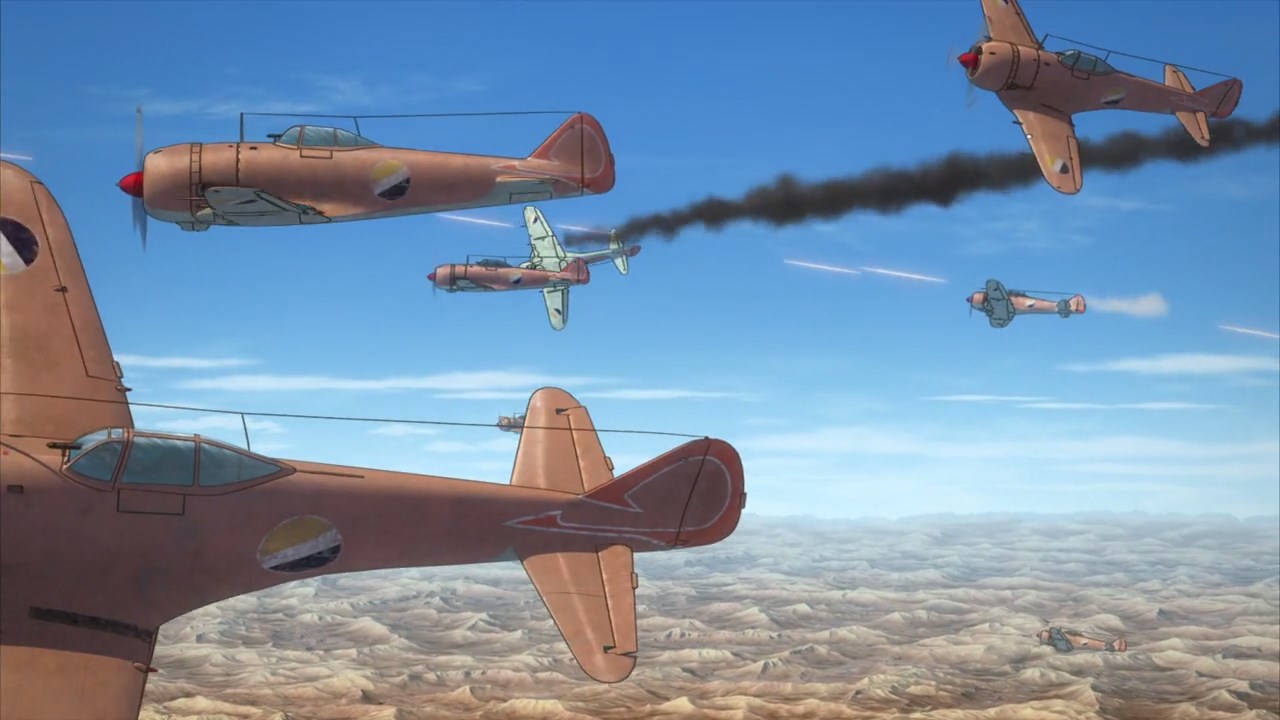 And really, they sure want to hunt Councilor Julia down because of her arrogant attitude. Even her own squadron couldn’t fend the enemy off! 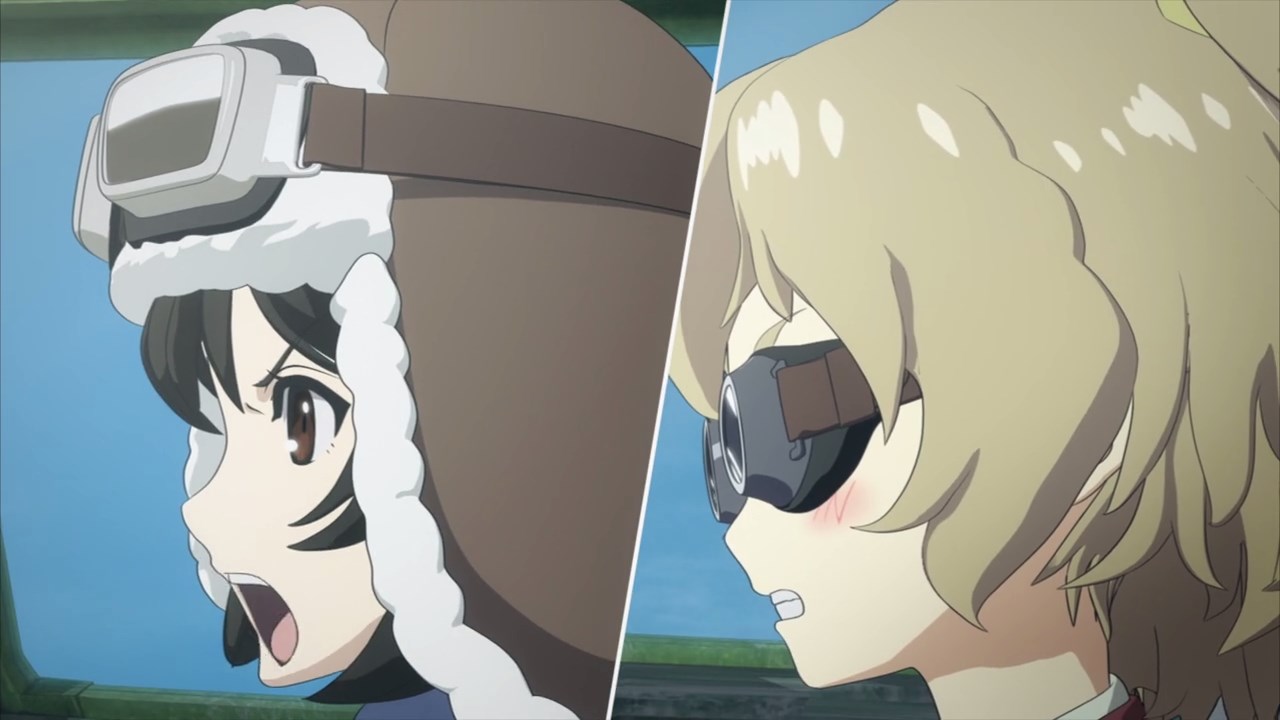 Meanwhile, here’s both Kirie and Chika as they’re forced to become partners while shooting down pirates.

C’mon, if they can’t work together, either of them will be dead and Reona will be very upset! 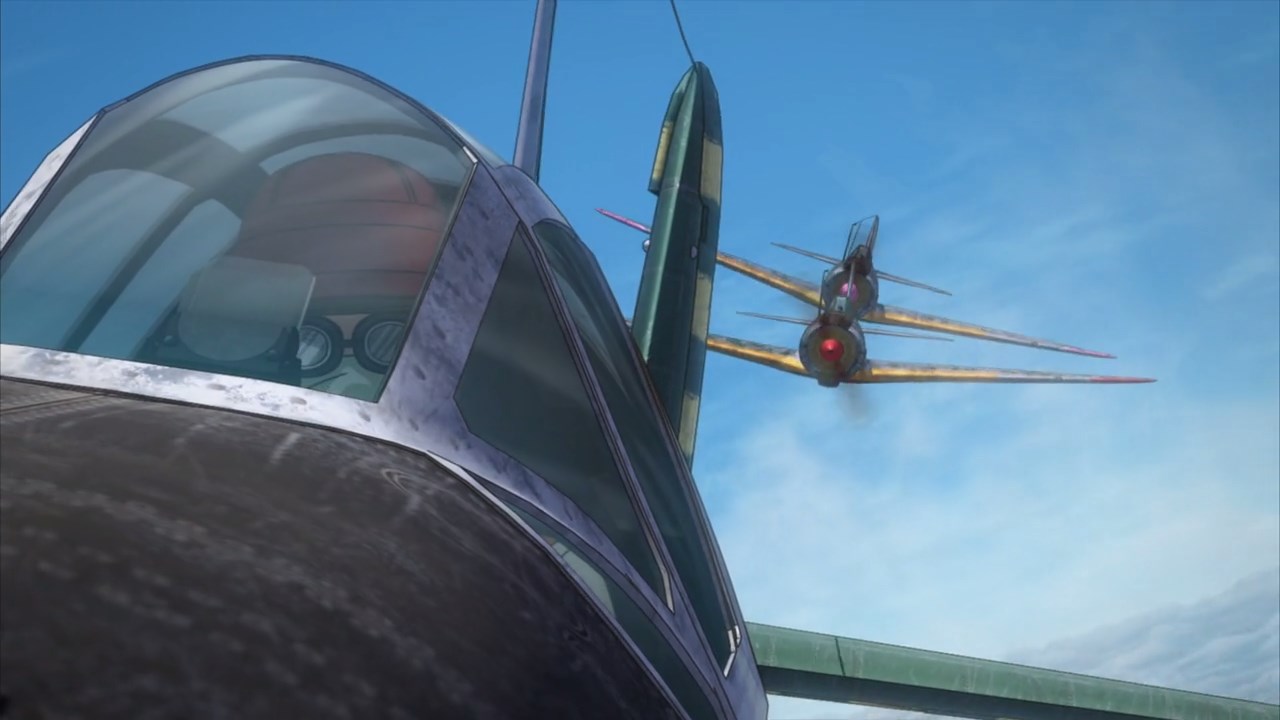 With that said, both Kirie and Chika chased this enemy fighter, with Kirie acting as bait so that the enemy thinks that he’s fighting an airplane without ammo. 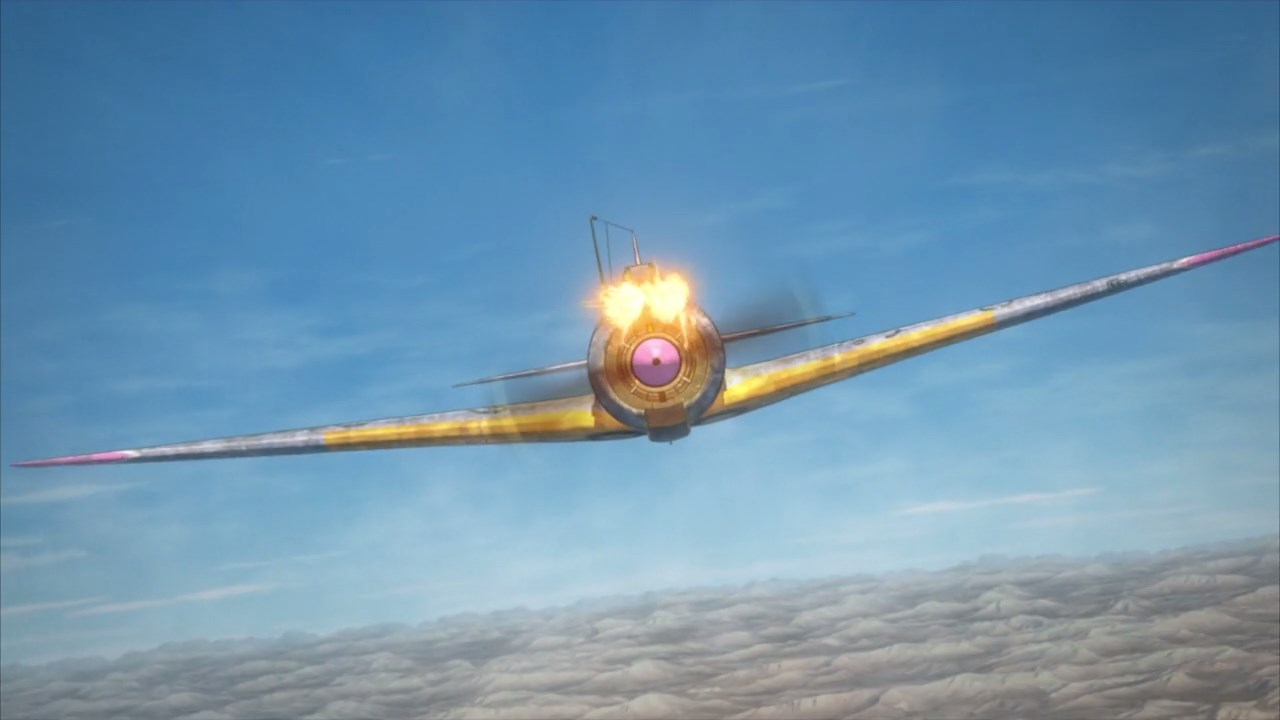 Once the enemy lowers his guard, Kirie flies up so that Chika can go for the kill! 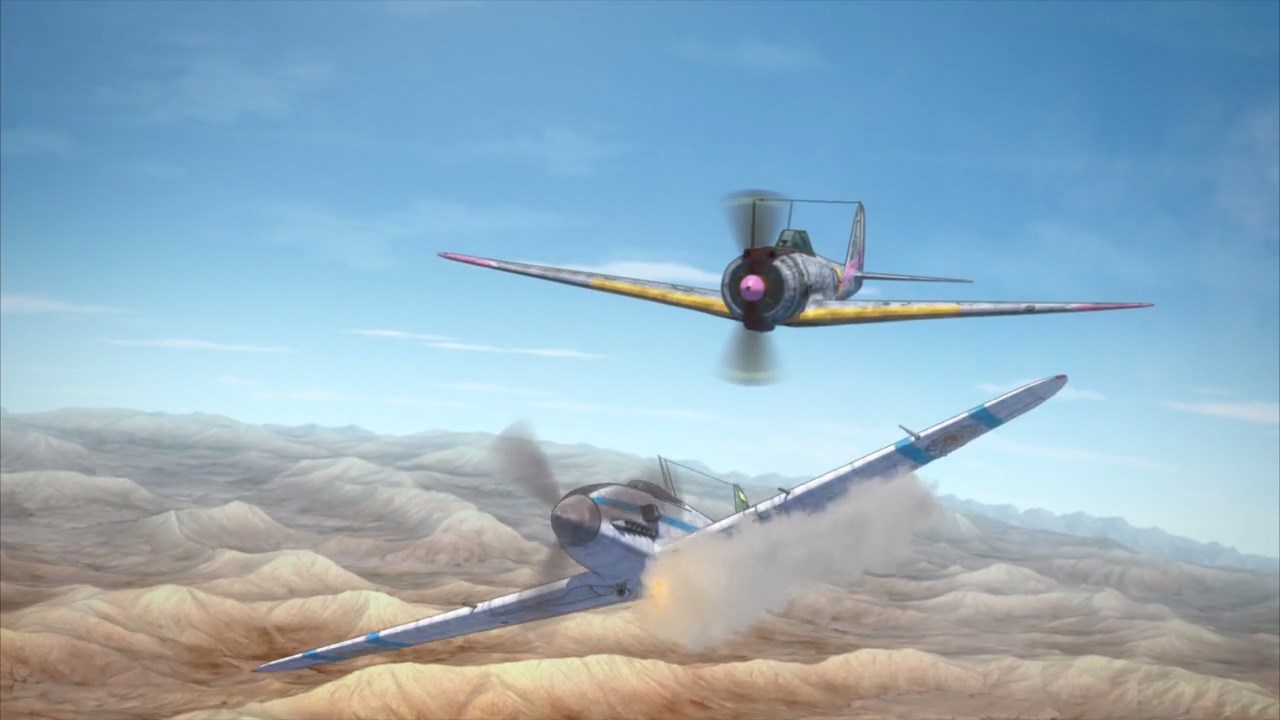 And as you can see, they brought down one enemy plane thanks to their teamwork, even though Kirie and Chika hated each other ’cause they have different tastes.

With that said, the pirates retreated as the Kotobuki Squadron managed the escort Councilor Julia to Gador safely. 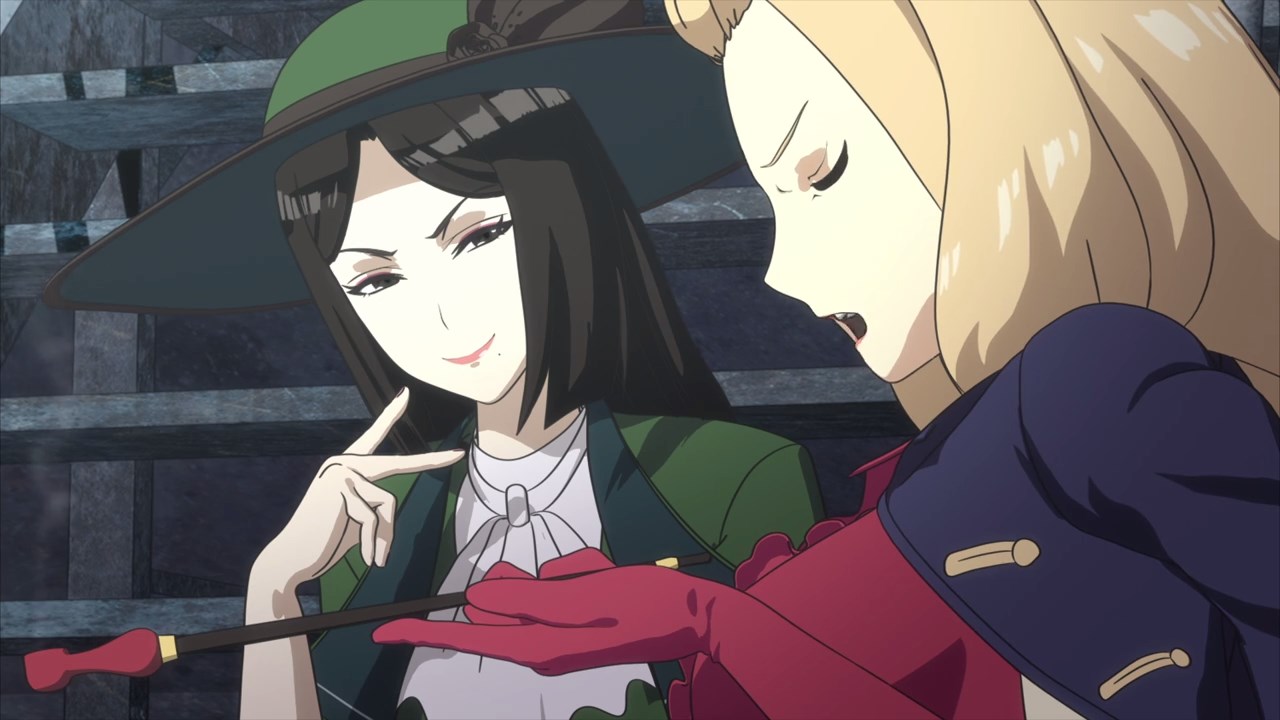 Of course, Madame Lulu told Julia that she’ll never work with her again because it’s a pain in the ass to deal with a haughty councilor.

Then again, I think another reason why Julia hired the Kotobuki Squadron in the first place is because she’s secretly in love with Lulu… or so I believe. 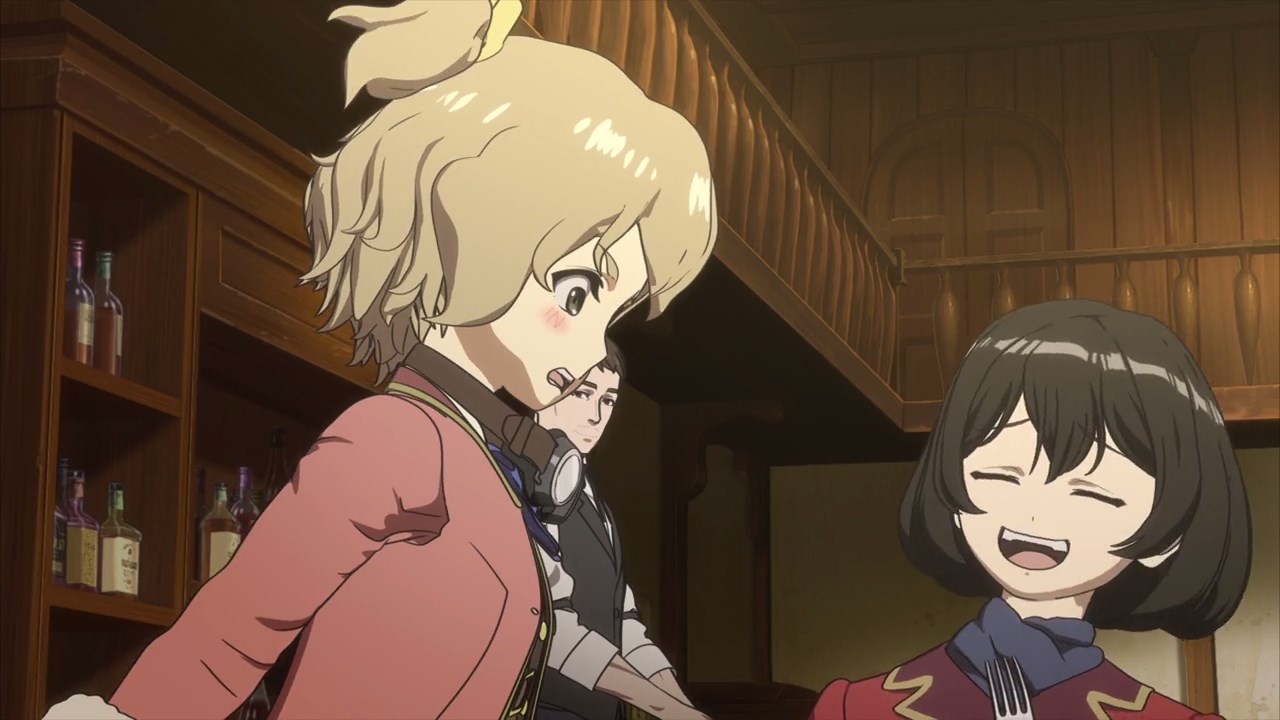 But as for Chika and Kirie, they still bicker even after working together to fend those pirates off. Man, if only they became friends after fighting against the enemy but oh well, at least the Kotobuki Squadron survived for another day.

Still, I’m worried about Councilor Julia as while she has good intentions to bring former pirates back into society, I feel that Julia might do it worse. In any case, let’s that the next episode will fare better for the Kotobuki Squadron!