Oh, look what we have here? Seems that we got some fanservice courtesy of both Zara and Reona. By the way, this is one of those rare moments where it’s animated traditionally. 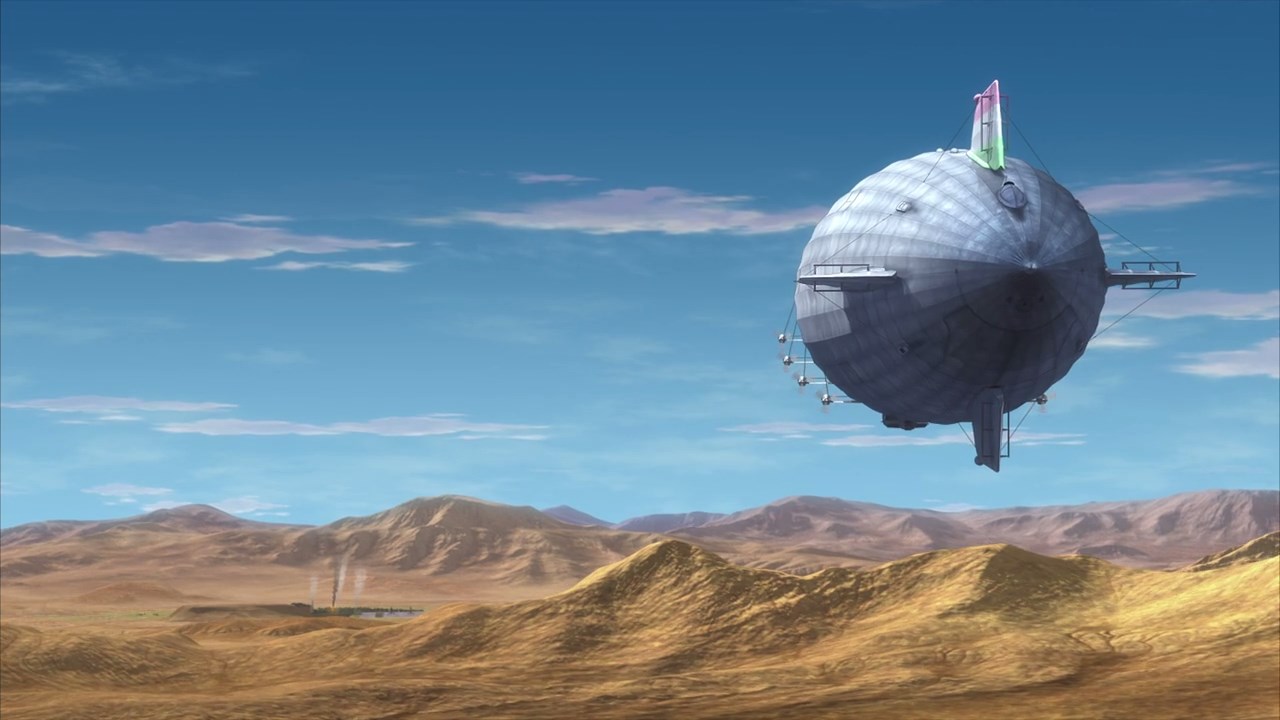 Unfortunately, the Kotobuki Squadron will have a rude awakening when they arrive at Rahama. And really, this town got run down by pirates, except that it’s not the case. 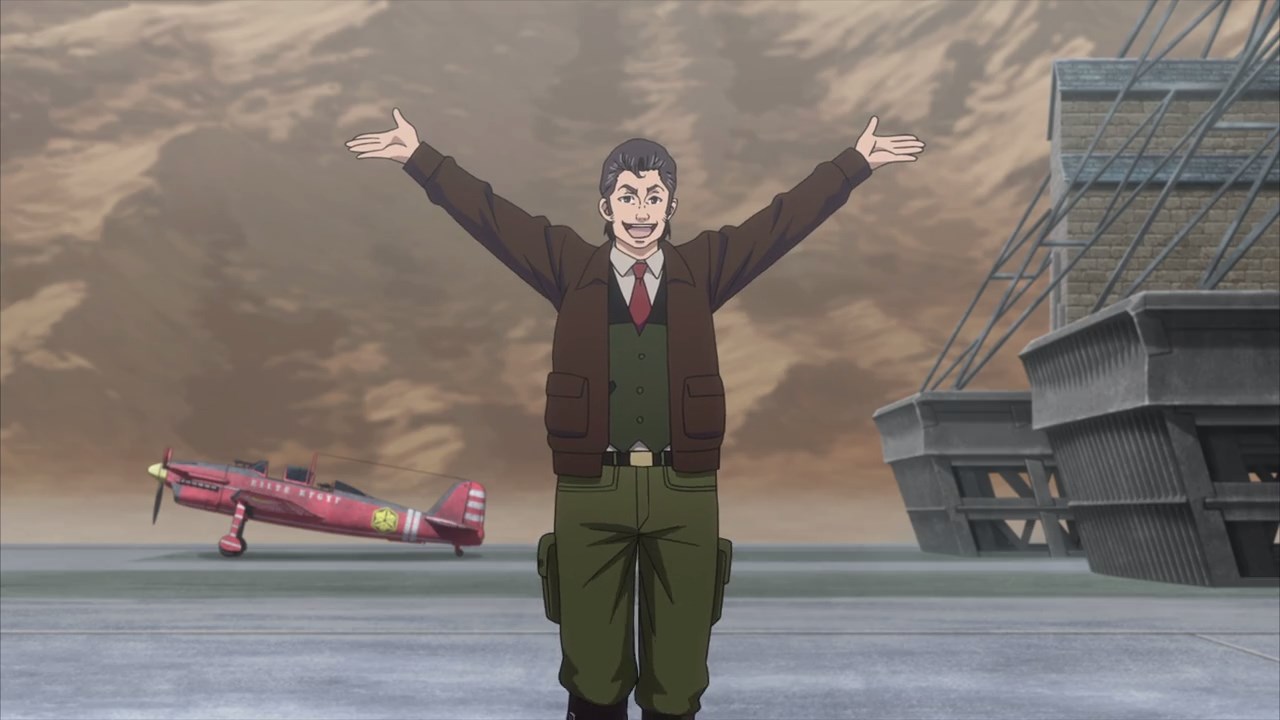 Instead, the town of Rahama is being ravaged by a maverick company called Elite Industries, whose CEO named Torihei has a penchant of collecting fighter airplanes. Thus, Torihei and his employees attacked Rahama because they found a rare Raiden airplane. 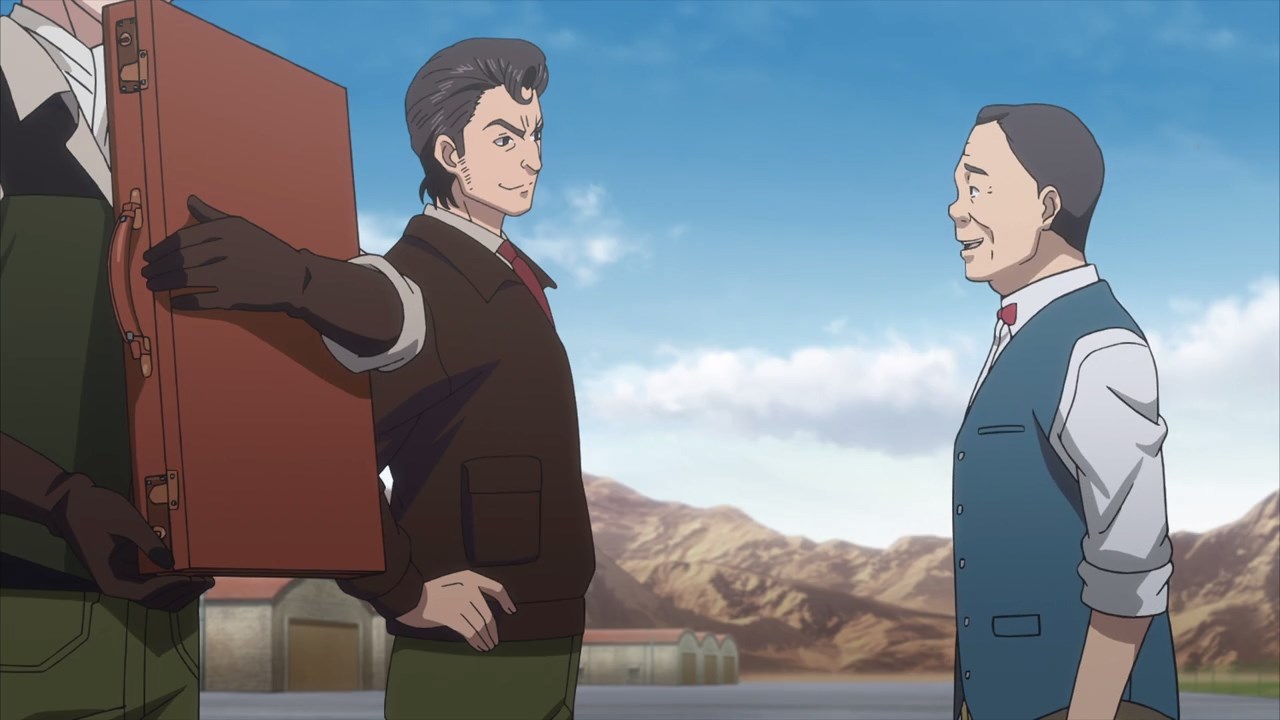 Of course, he’ll do the peaceful solution as Torihei offered the mayor of Rahama an ukiyo-e painting, which he claims that it costs a fortune. Then again, I bet that the ukiyo-e painting is worth nothing as I suspect that it’s a fake one.

Unfortunately for Torihei, the mayor refused to give his prize airplane to Elite Industries. That’s sucks for the CEO but here’s the thing though, if someone refused Torihei’s offer? 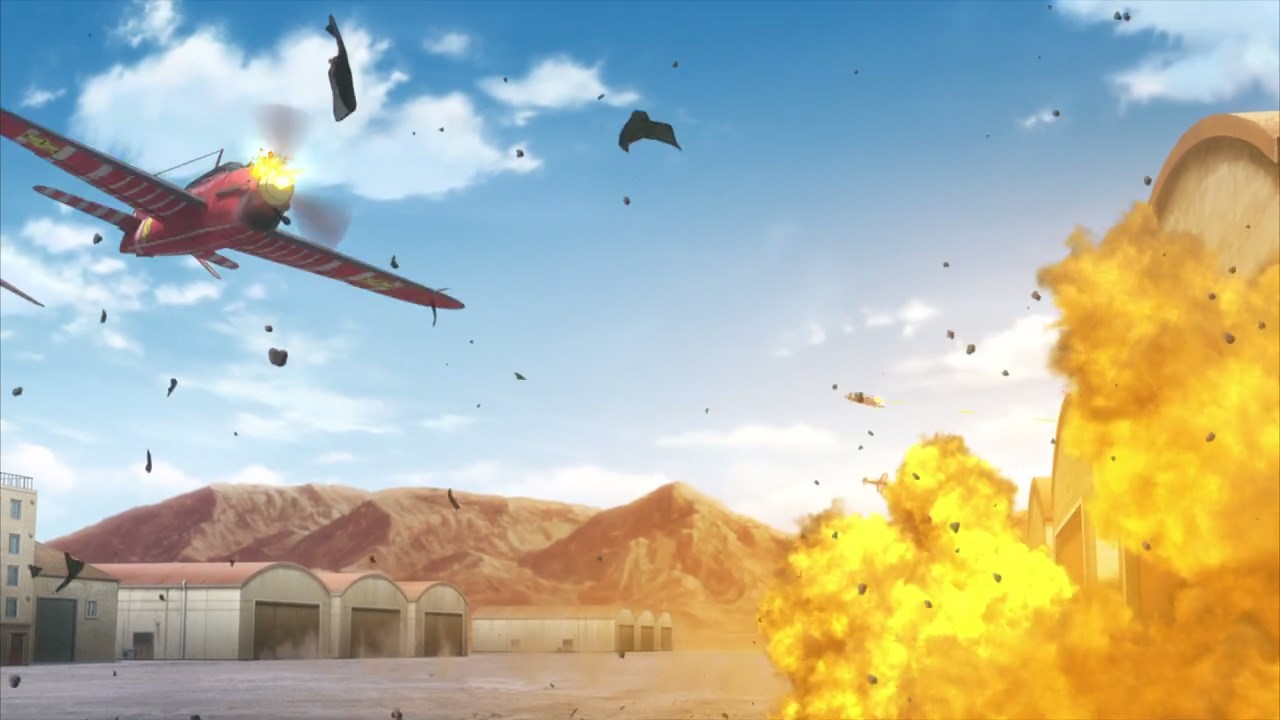 Well, here’s the result as Elite Industries will wreck the town until they got what they want. Really, just for a freaking fighter plane!?

Seriously, I bet that they’ll gonna use the Raiden fighter plane for their plans of world domination, making them worse than pirates! 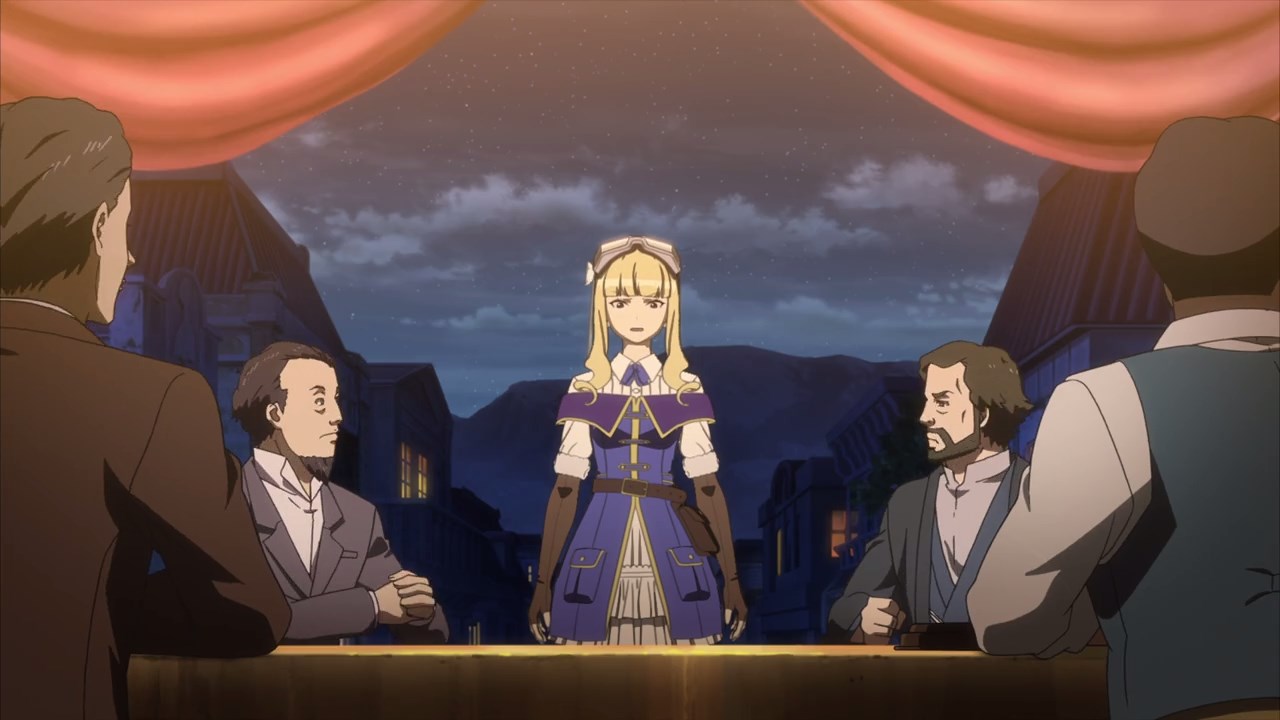 In any case, Emma told them to fight back against Elite Industries ’cause giving important things away to them will give the likes of Torihei to come back for more outrageous demands. Come to think of hint, I have some hints that Emma’s backstory involves having her hometown ransacked by pirates until there’s nothing left to give.

Also, if the militia can’t handle an organized mercenary unit like Elite Industries, the Kotobuki Squadron will aide them… for a price of course. Don’t know what the mayor will pay them for their service. 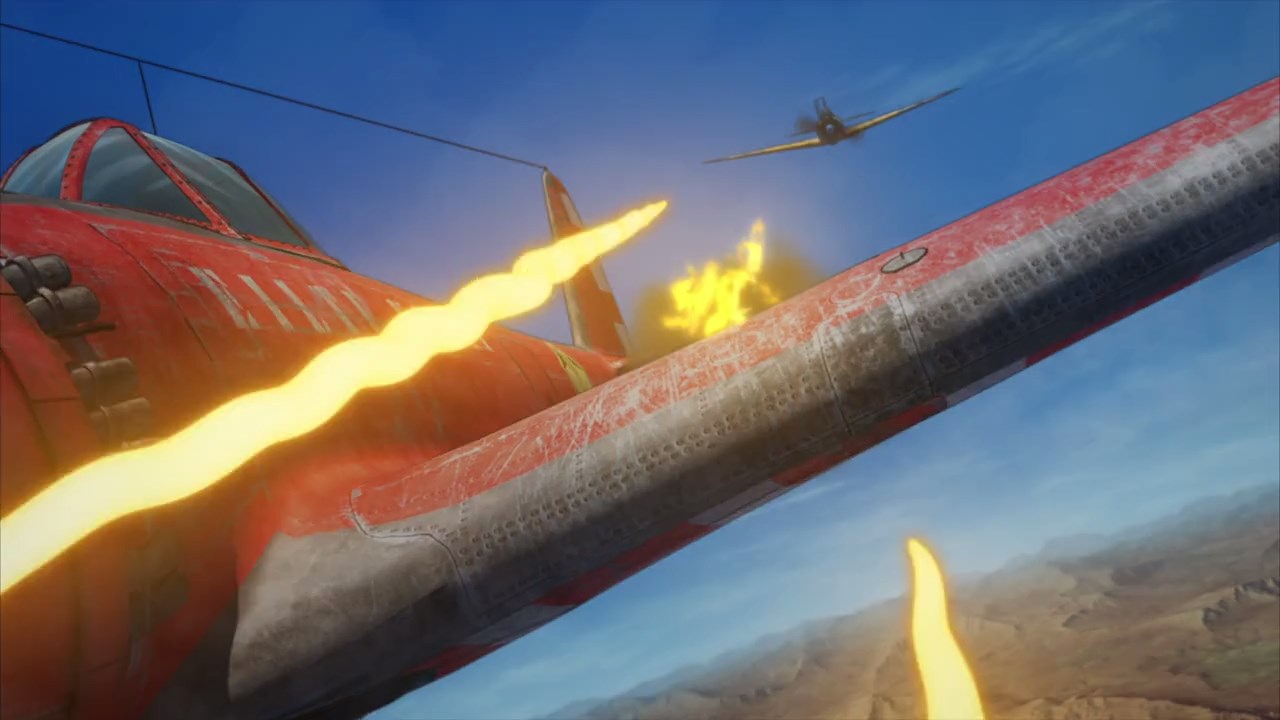 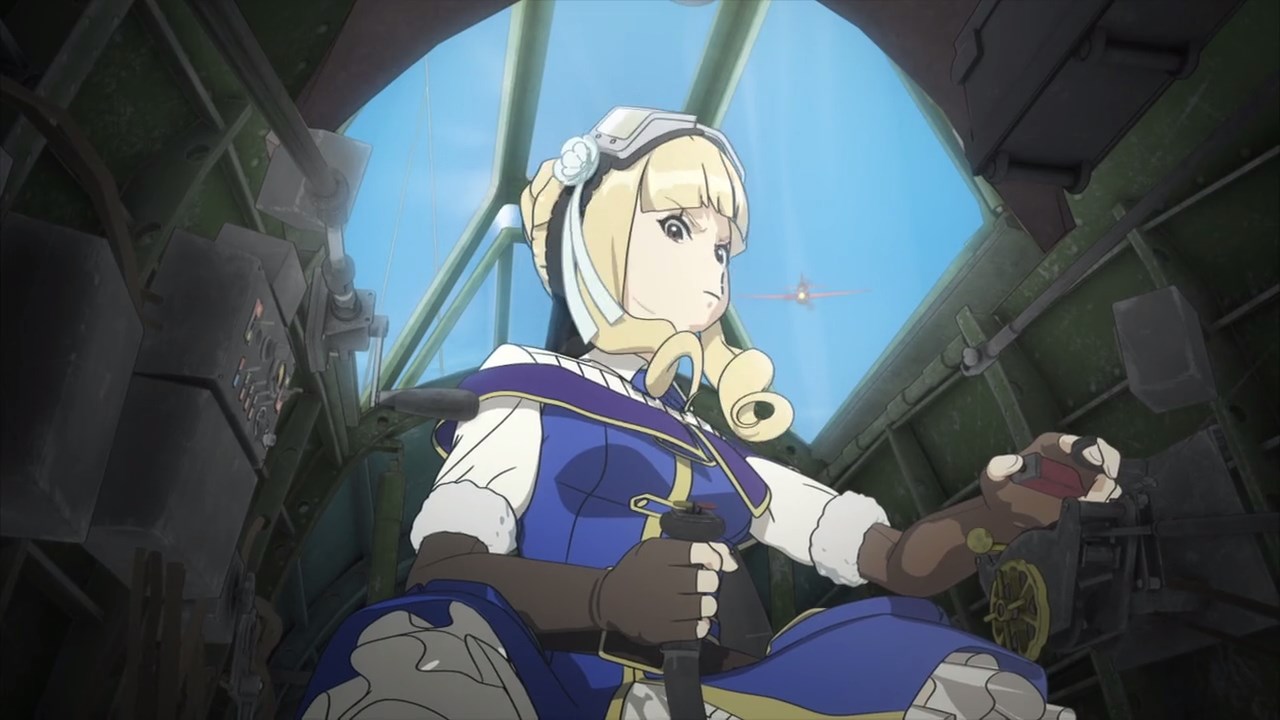 Meanwhile, it appears that Emma is gunning for Torihei’s head as she chases the CEO’s airplane and take out its wings. 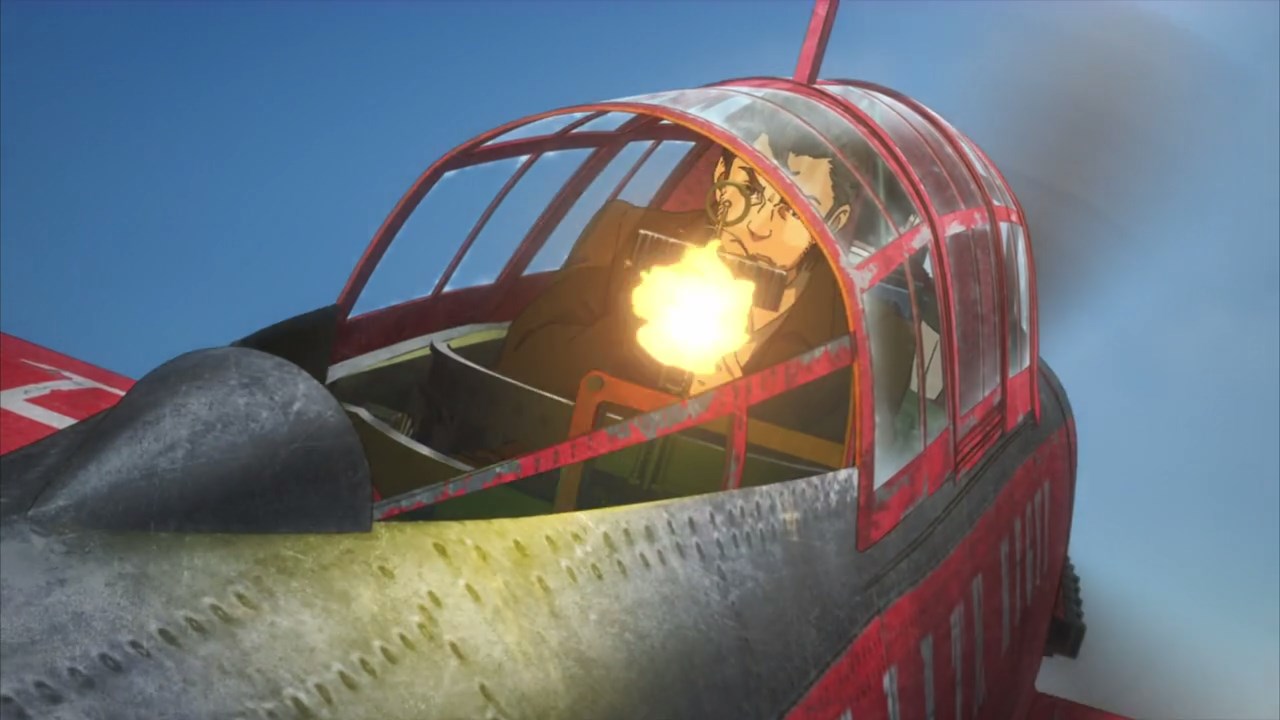 On second though, seems thta Emma will have to reconsider on taking out the CEO’s airplane as Torihei has a machine gun at hand.

By the way, he has a personal pilot flying his airplane, which gives Torihei the role as a rear gunner. 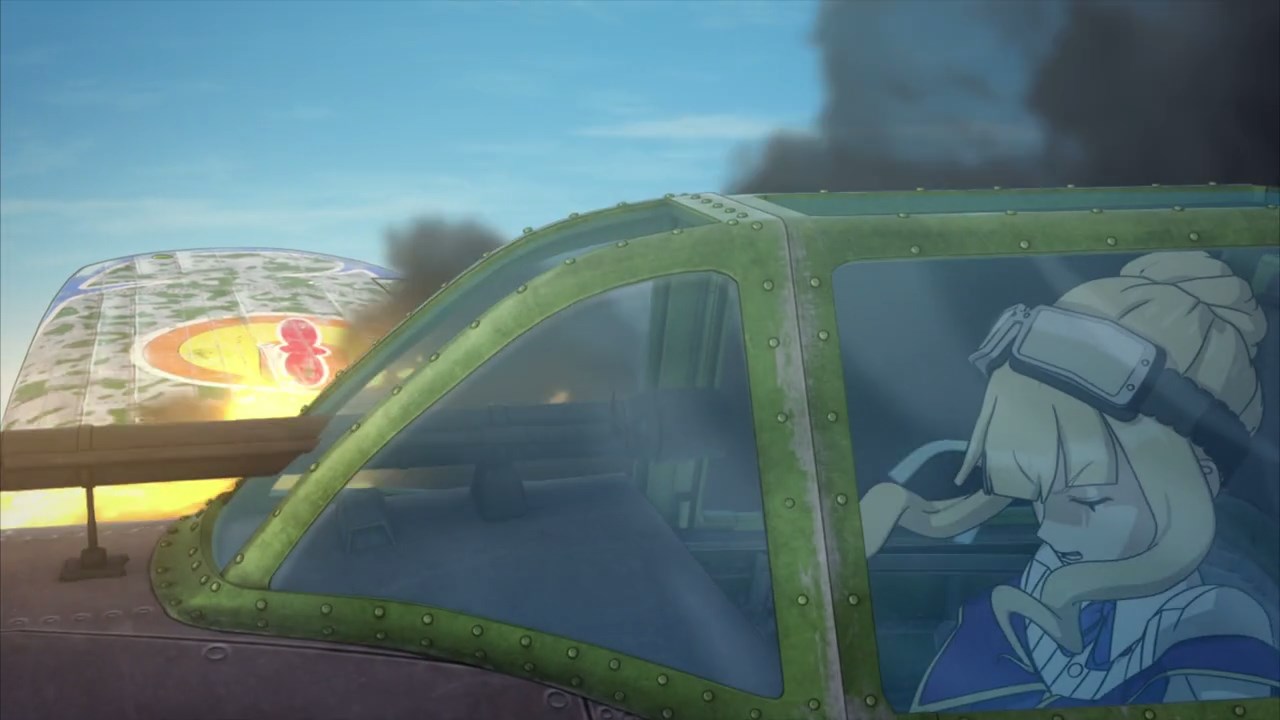 And unfortunately for Emma, her plane got shot down as she was caught off-guard by Torihei’s daring attack. 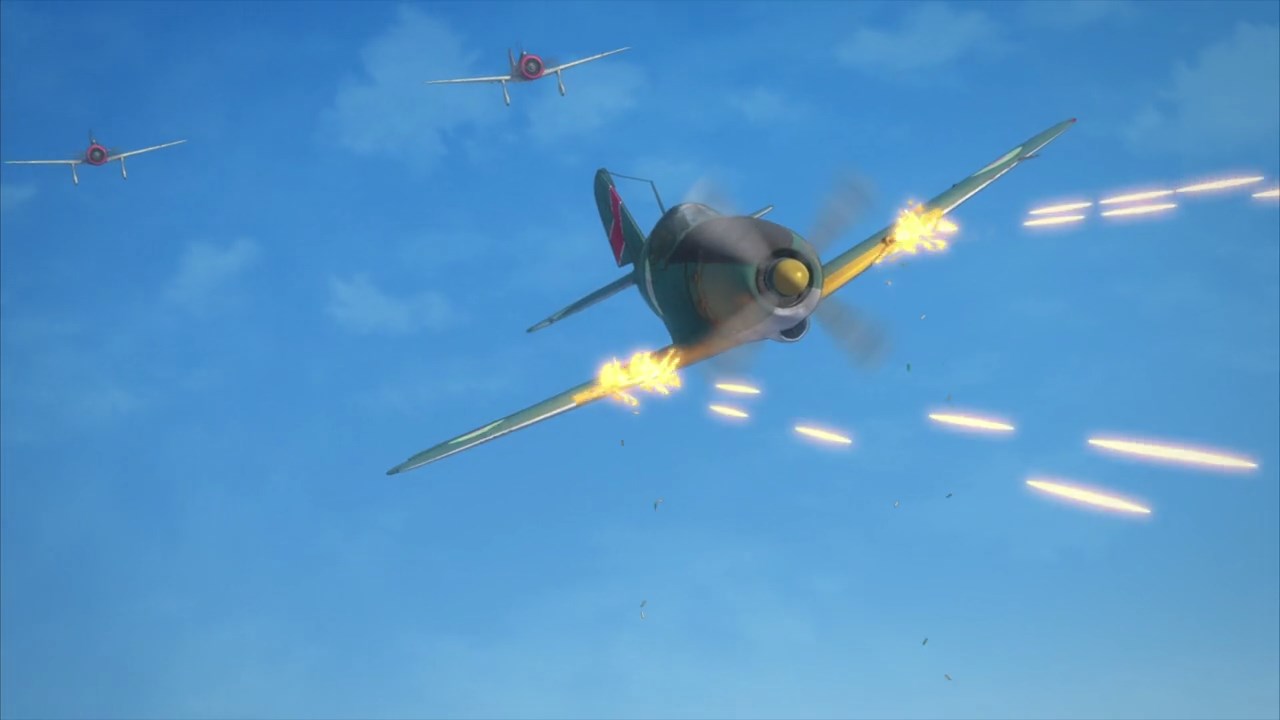 As her plane is about to get crippled beyond repair, another plane showed it. It’s the Raiden airplane where instead of being kept in some secret hanger… 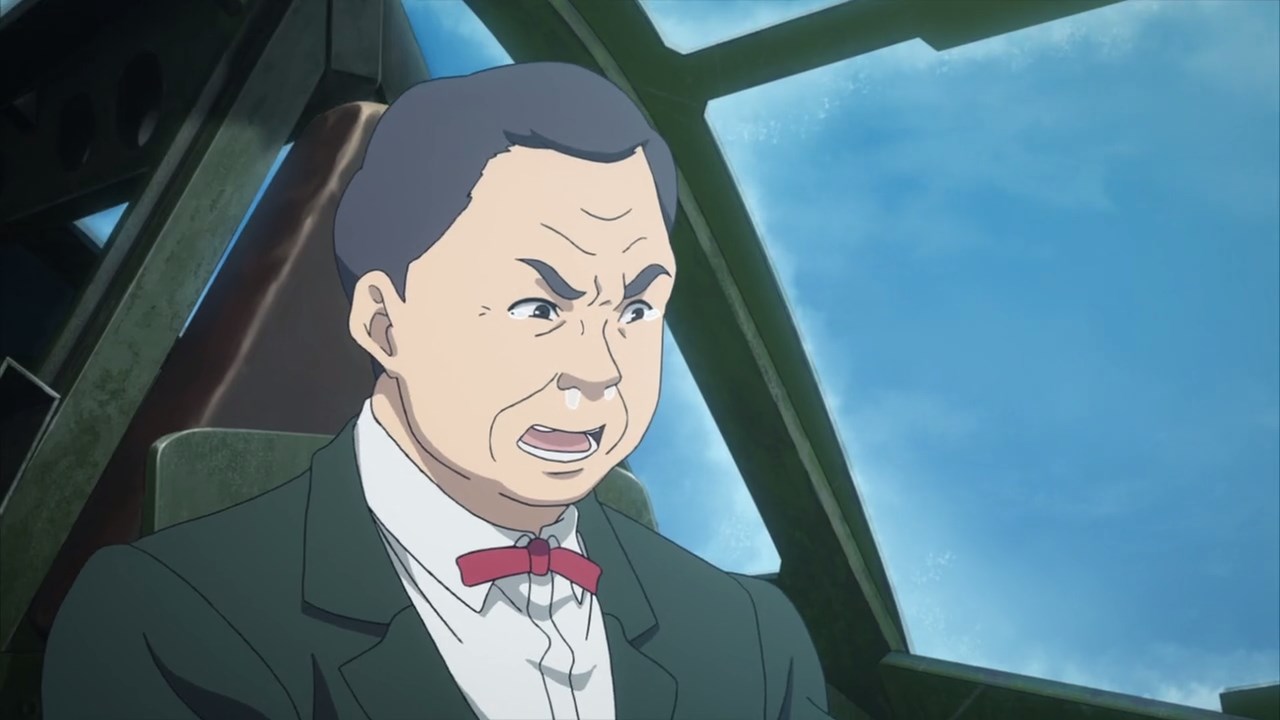 …the mayor of Rahama decides to fight back. Then again, it’s been a long time the mayor flew his plane in a dogfight as his flying skills are a bit rusty. 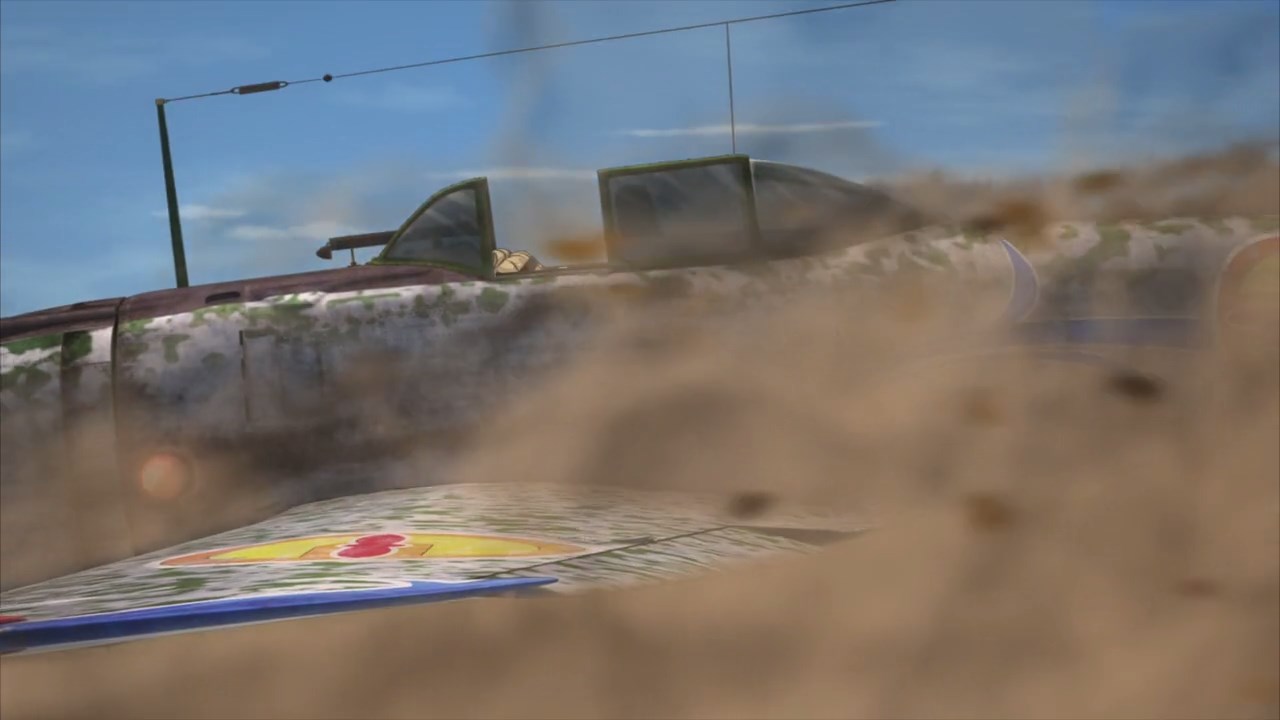 Fortunately, Emma is alive as she made a rough landing. Of course, their resident mechanic will have a hard time fixing her plane for the next mission. 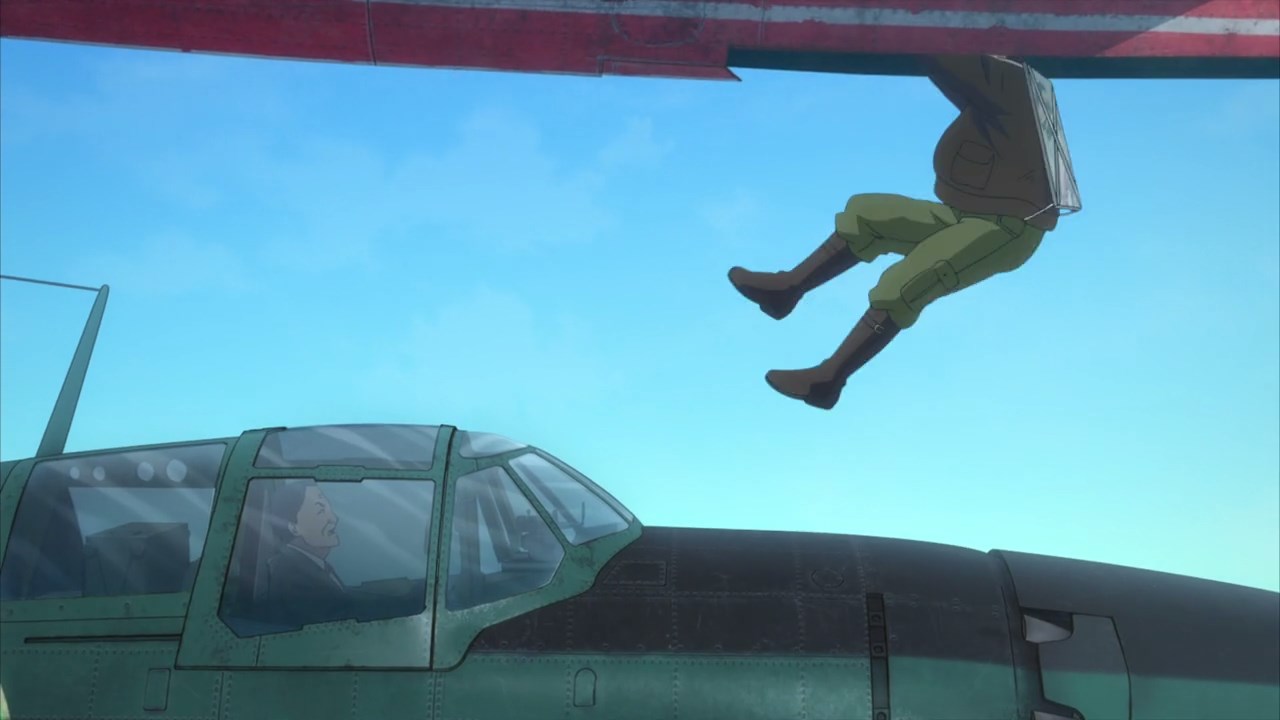 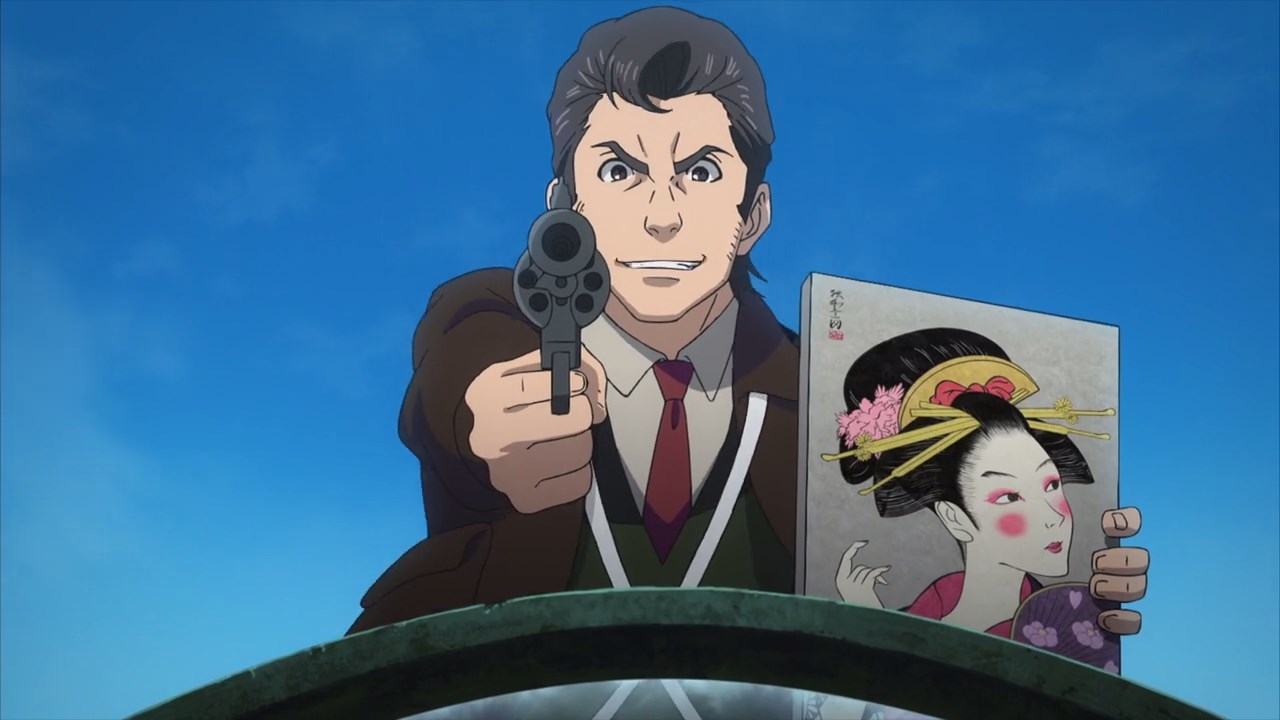 But on the other hand, it appears that Torihei hijacks the mayor’s plane at gunpoint. It’s either the “allegedly counterfeit” ukiyo-e painting or his damn life for the mayor. 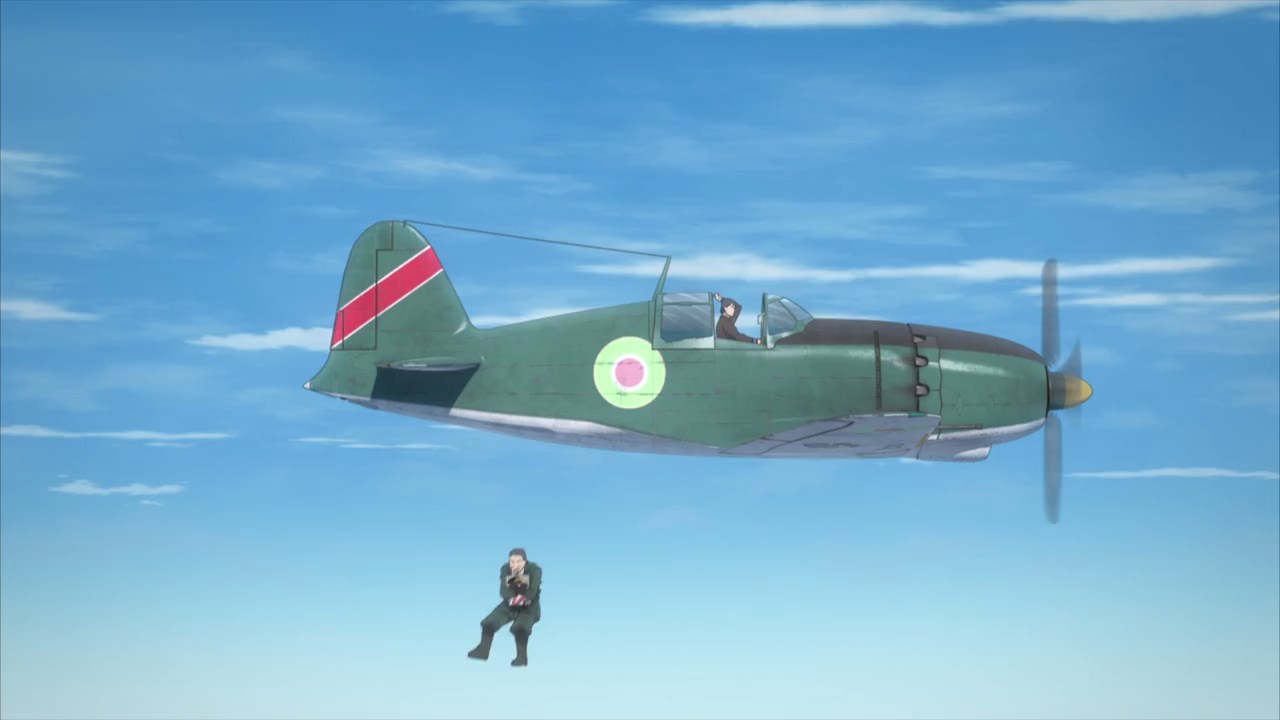 Unfortunately, he chose the latter as Torihei successfully hijacks the Raiden airplane and head over the sunset together with his Elite Industries employees. What a horrible way to botch this crucial mission! 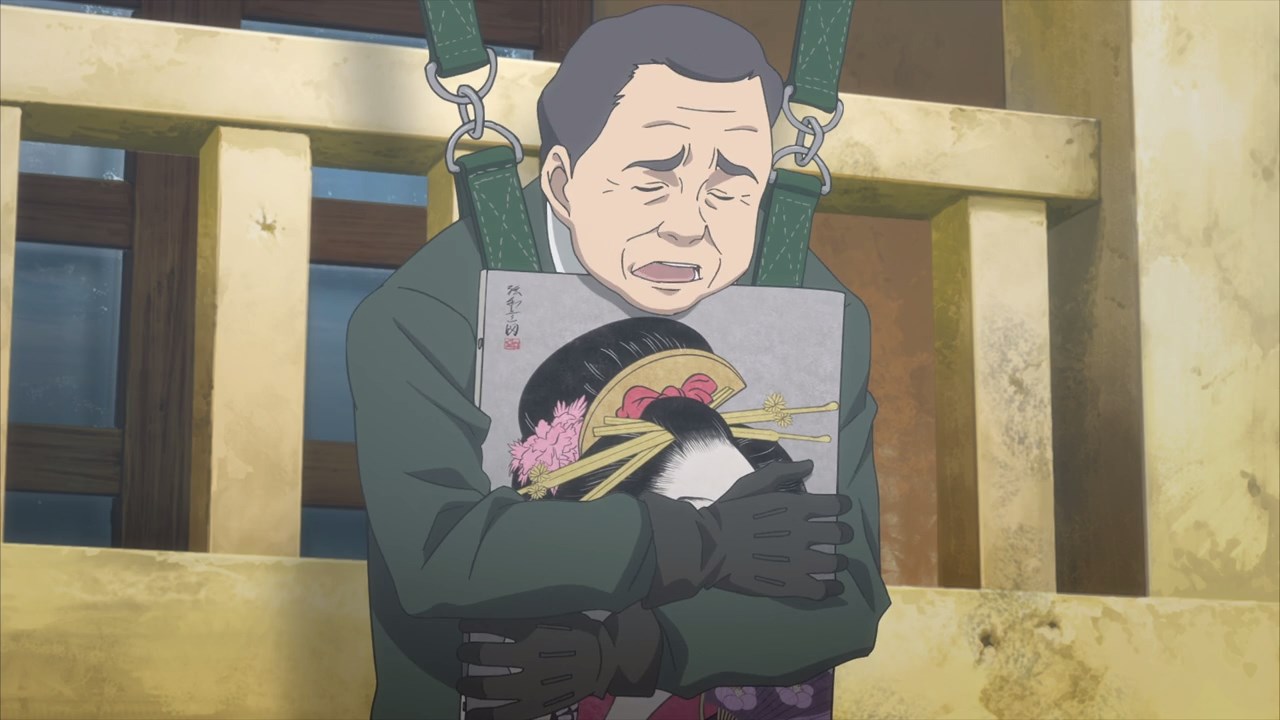 Then again, it would be better if the people of Rahama would just scrap the airplane because honestly, the mayor of Rahama made a pathetic move to fight the enemy, only for Torihei to nab his plane in the end. What an idiot! 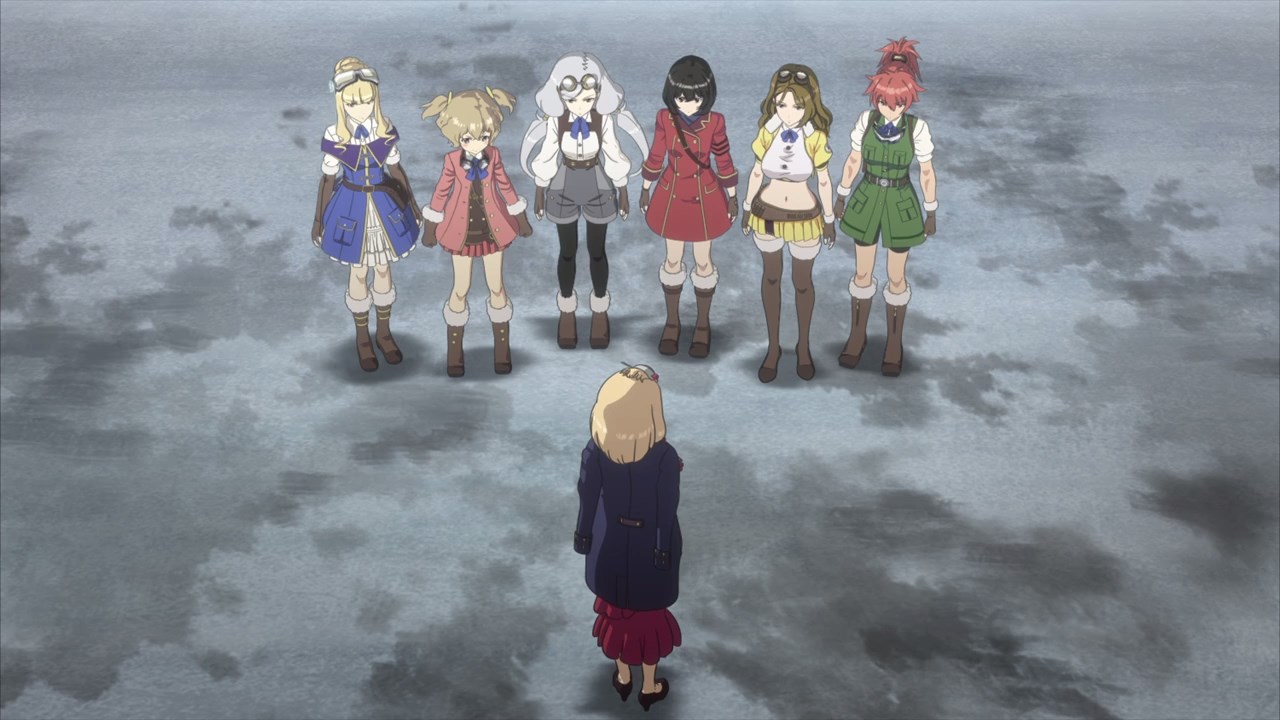 But for the Kotobuki Squadron, Madame Lulu told the girls to get the airplane back because they can’t end this mission empty-handed. And also, crush Elite Industries so that they won’t pillage rare airplanes again and use them for nefarious purposes.

Next time, the Kotobuki Squadron will infiltrate Elite Industries headquarters and reclaim the Raiden fighter plane. Then again, I think Kirie and the rest might accidentally destroy the aircraft.