Posted on February 5, 2019 by benigmatica 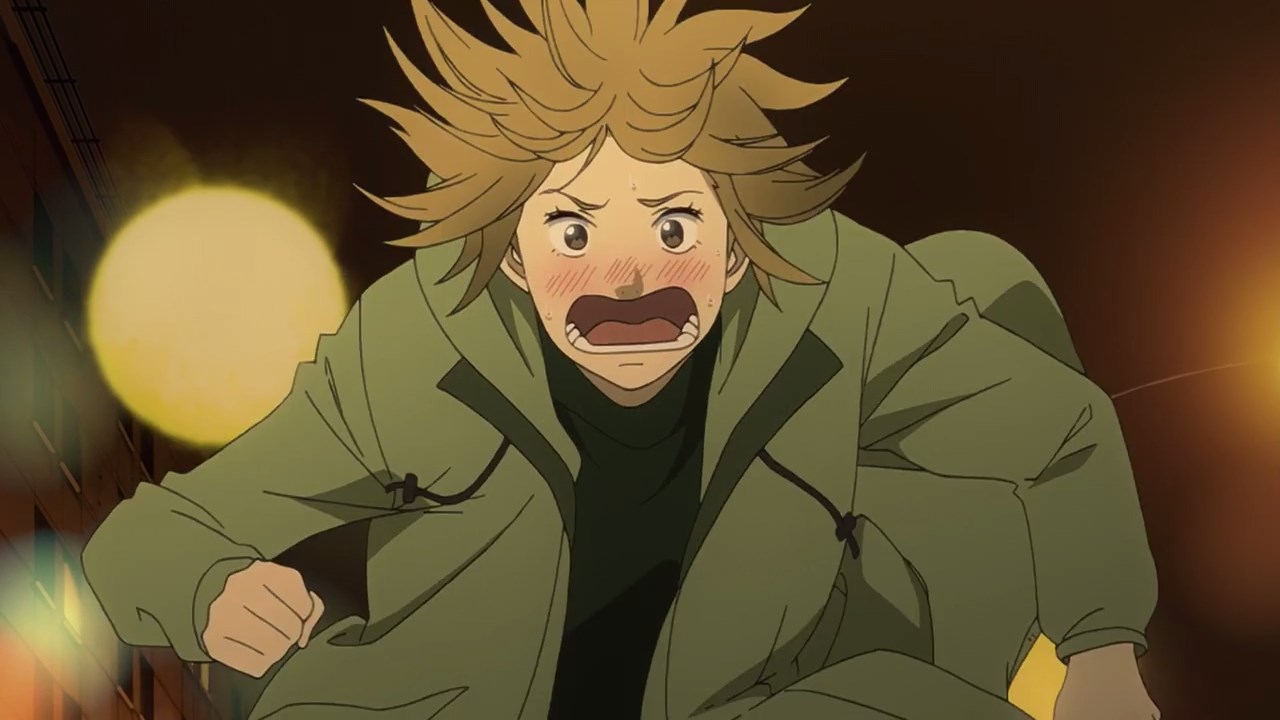 Well everyone, Piano no Mori has returned for the 2nd half where Kai Ichinose is rushing towards the music hall for the first stage results of the International Chopin Piano Competition.

Unfortunately, Kai-kun is running late in the party… 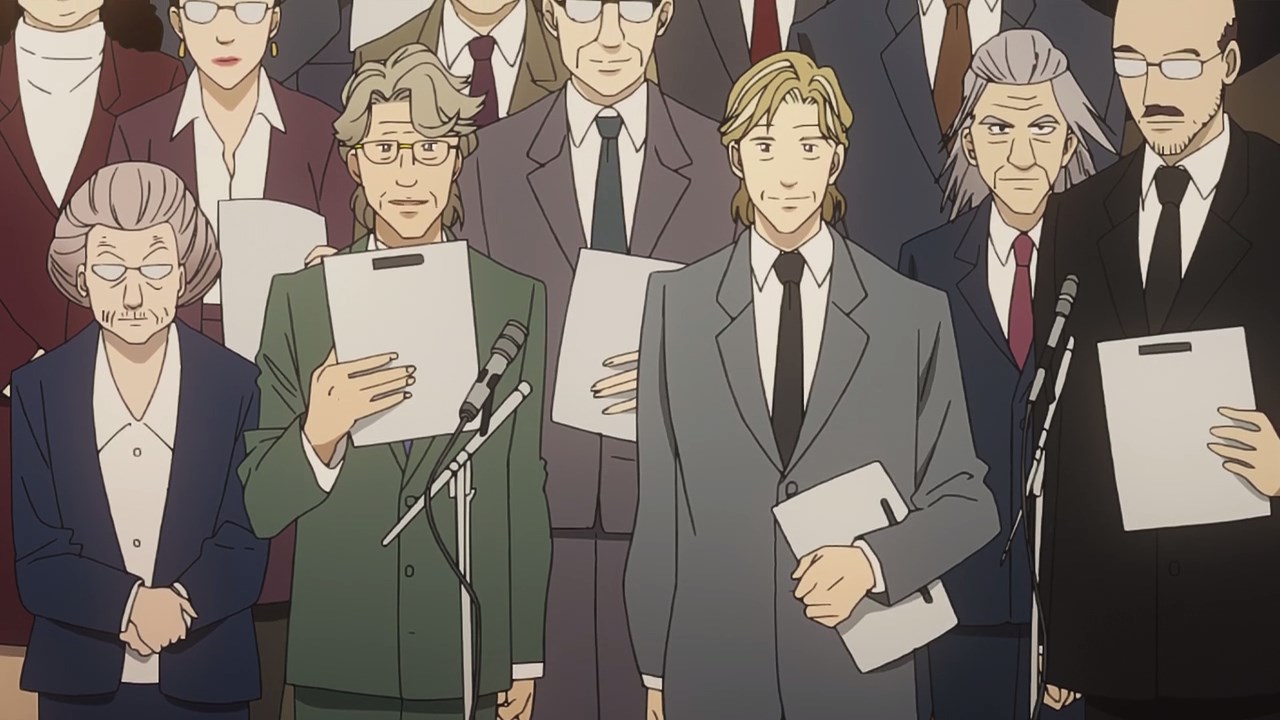 And to make it worse, the announcement has started where the judges will say the names for those who’ll pass the first stage. So yeah, Ichinose might not make it in time but who will make it to the second stage? 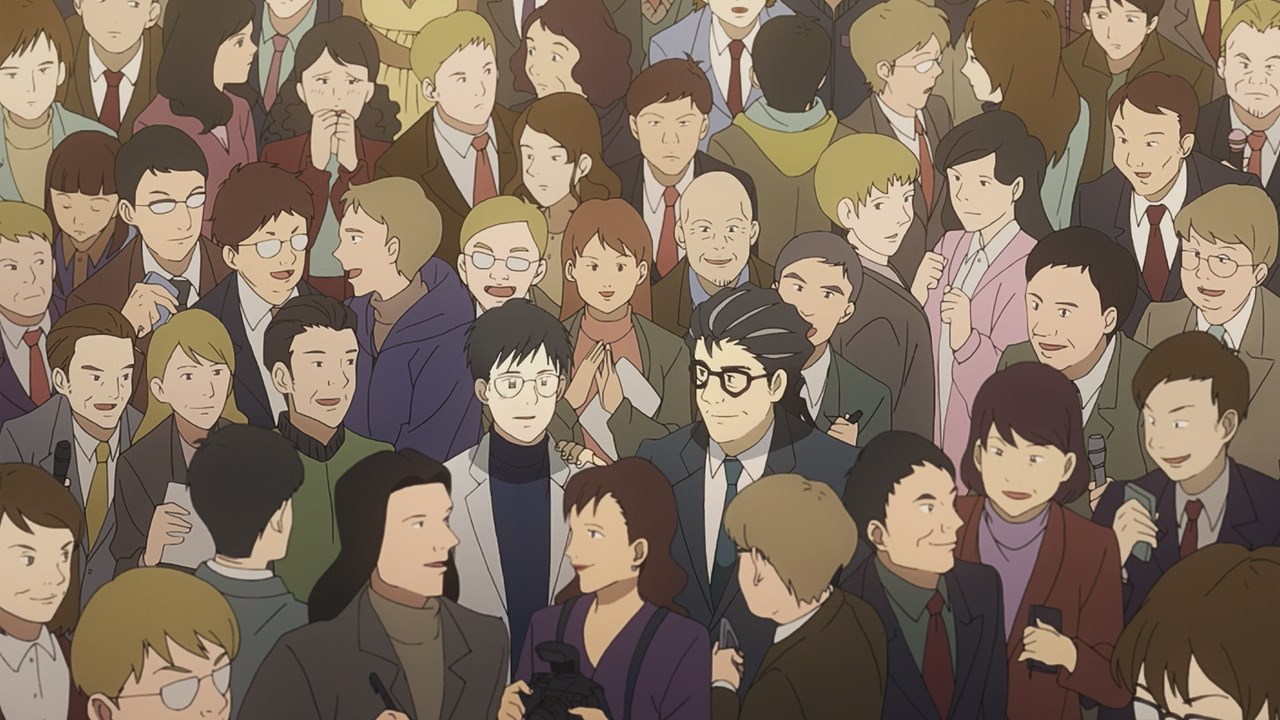 In the most surprising announcement, Shuhei Amamiya made it past the second stage, skipping over Karol Adamski who’s the hometown favorite in this competition. While Shuhei’s father Yoichiro is happy that his son made it… 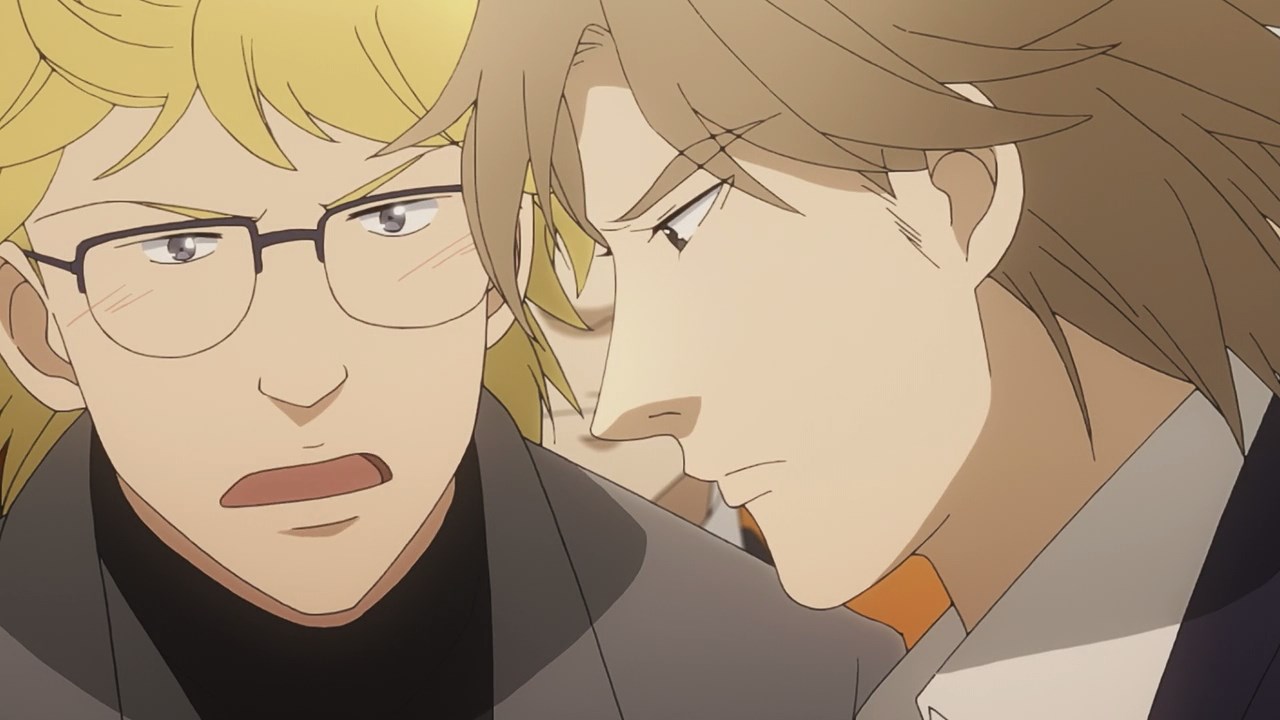 …others are shocked that Adamski didn’t made it past the first stage. Even the tabloid reporter Szymon Hausner couldn’t believe that the hometown favorite failed to qualify that he demands an explanation. 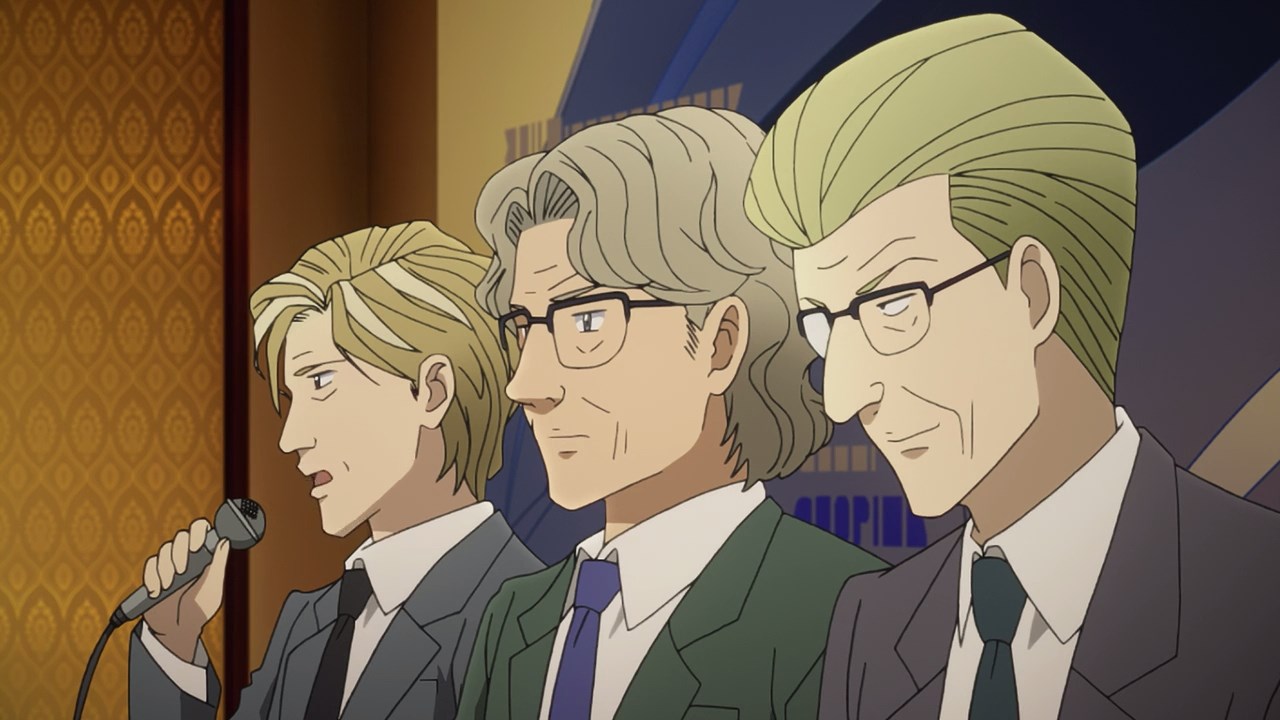 But, the judges told Szymon Hausner that the reason why Karol Adamski didn’t qualify is because his understanding of Frédéric Chopin’s works is still limited. 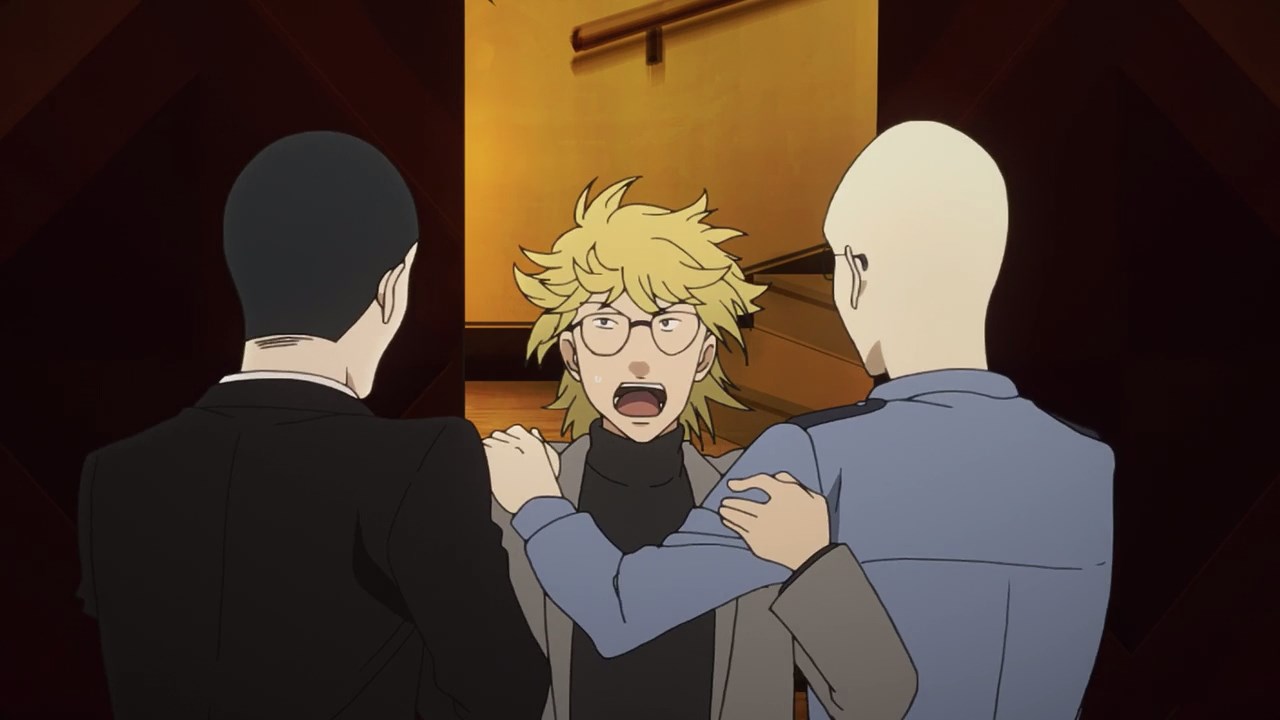 Then again, Szymon Hausner won’t even accept their explanation as he called the results as nothing but a farce.

But here’s the thing though, I feel that the reason why Adamski failed to qualify is because there’s some politics involved, with some judges wanted to promote the next Polish prodigy, Lech Szymanowski. Still, it’s unfortunate that Karol Adamski didn’t make it. 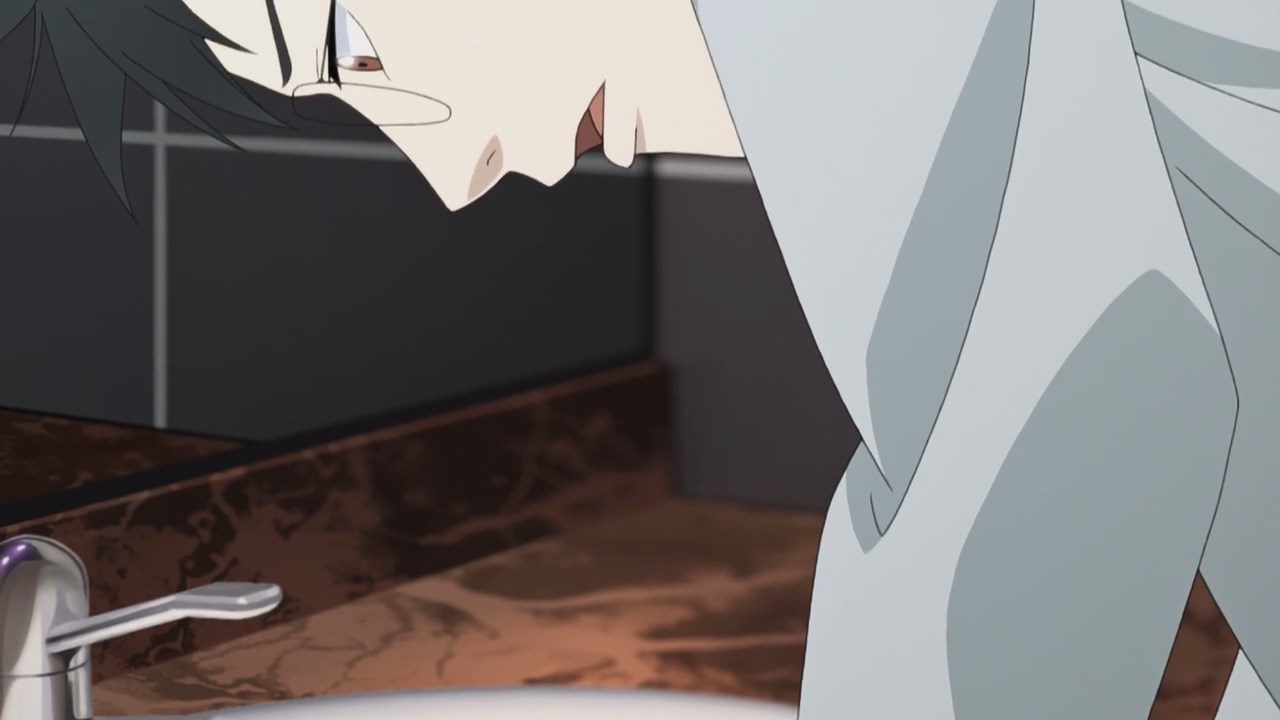 But as for Shuhei Amamiya, he’s still dazed and confused that someone like him have made it past the first stage. In fact, Shuhei needs to calm down a bit as he might pass out if Amamiya got stuck in the crowd for far too long. 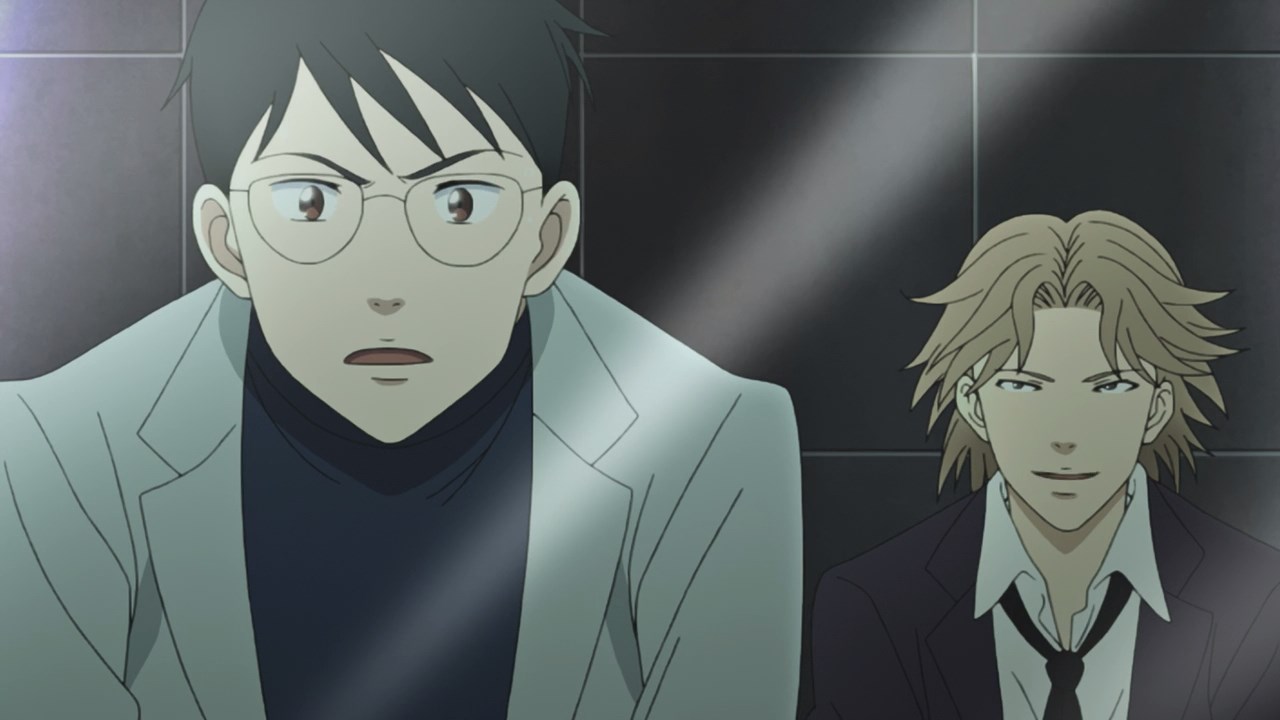 That’s until Shuhei Amamiya saw the ghost of Karol Adamski! Just kidding, Karol is still alive as he congratulates Shuhei-kun for qualifying in the second stage of the competition. 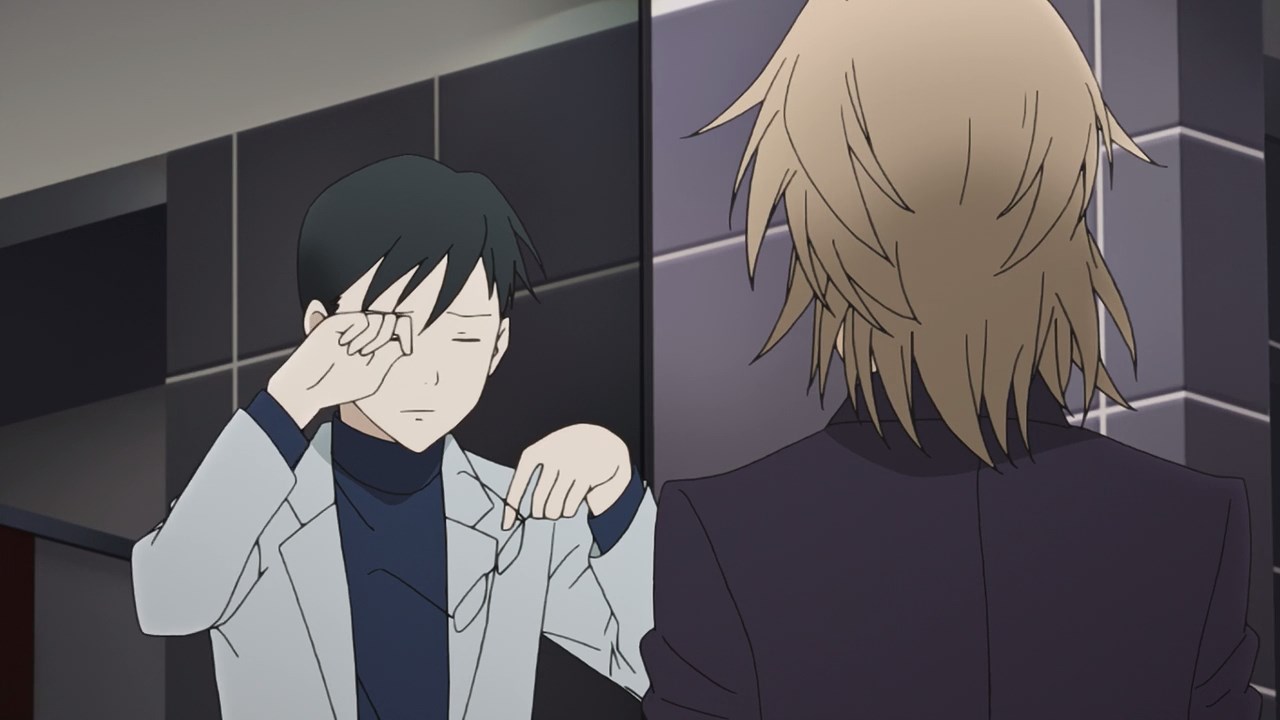 Of course, Amamiya is still anxious as he wants to beat someone who has the same level as him, that Shuhei is giving 200% just to beat his rival.

While he has that determination to be the best through hardwork, Karol told Shuhei that who wants to listen a strained performance of a pianist who skip meals and sleep just to train hard. 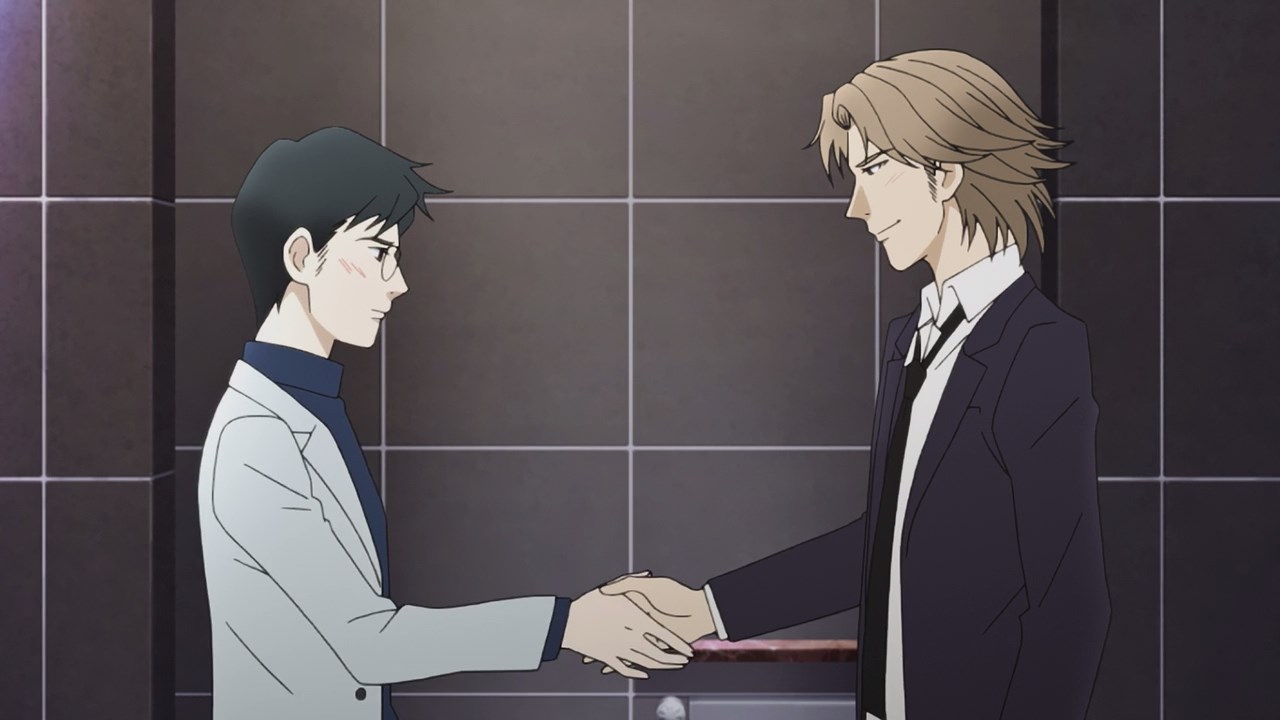 In any case, Karol Adamski told Shuhei Amamiya to have fun there and express himself through music as he shakes Shuhei’s hand.

Then again, Karol Adamski will have to leave the music hall empty-handed after gaving his all at the competition. 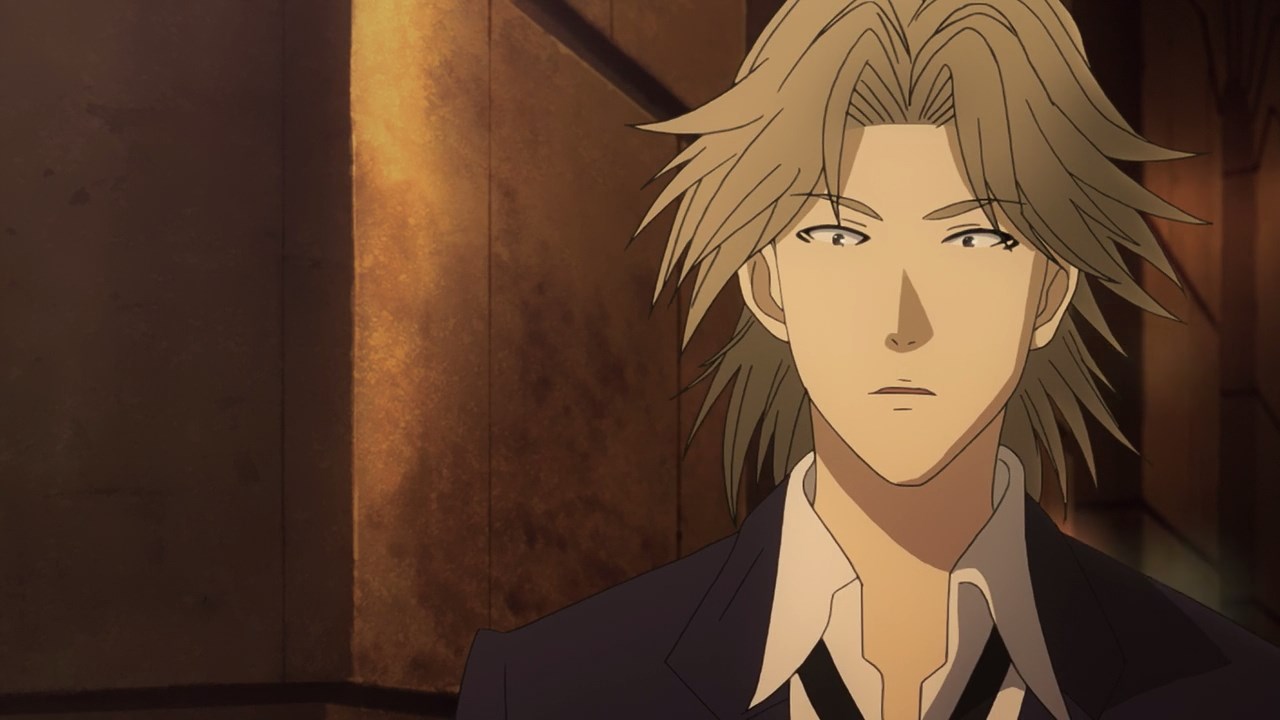 However, it appears that Adamski was surprised that someone is waiting for him outside the hall. 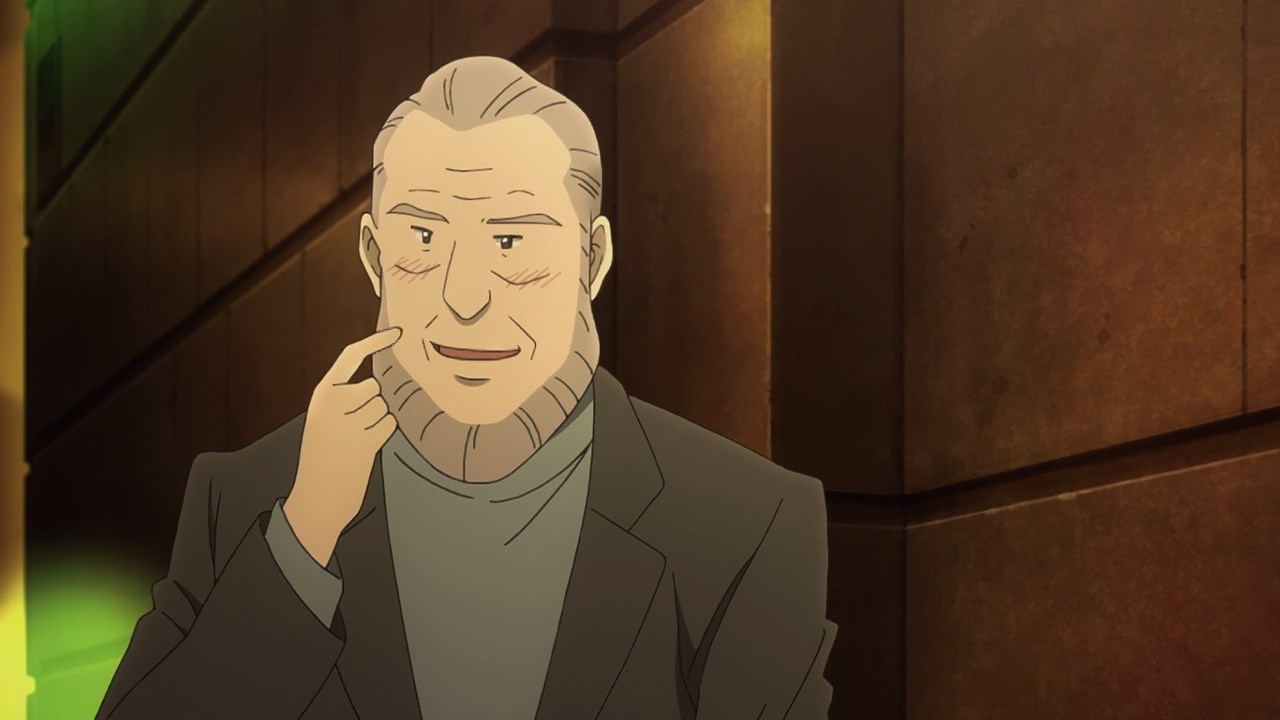 This is Raphael, Karol’s long-time piano teacher who was once cast him away for not giving him support when Karol was just a child.

Now, Raphael has returned to lend Karol Adamski a hand and start anew. He doesn’t resent his student as Raphael saw Karol’s magnificent performance in person which he describe it as going on a journey. 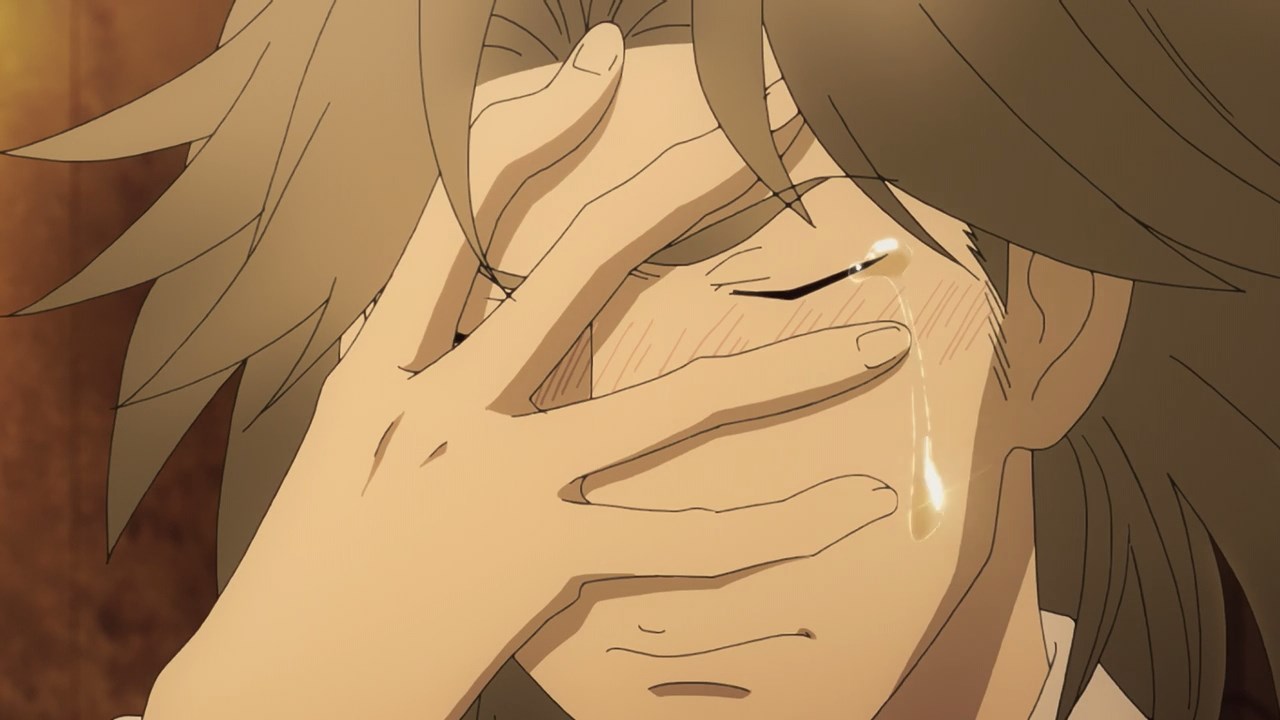 With that said, it appears that Karol Adamski has someone who can support him after all.

Maybe in 5 years time, he’ll return stronger as ever but for now, Karol will have to master his piano skills with his master Raphael guiding him once again. 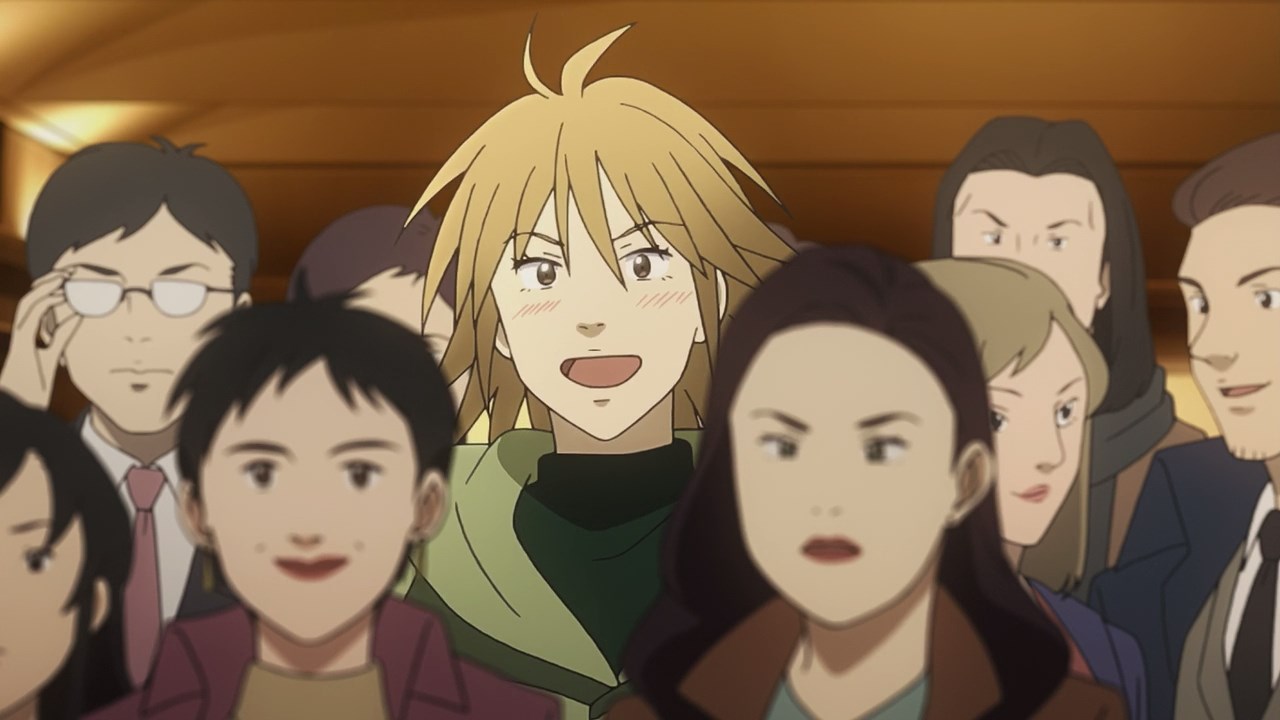 Now then, let’s go back to Kai Ichinose where he’s happy that he made it past the first stage of the competition. 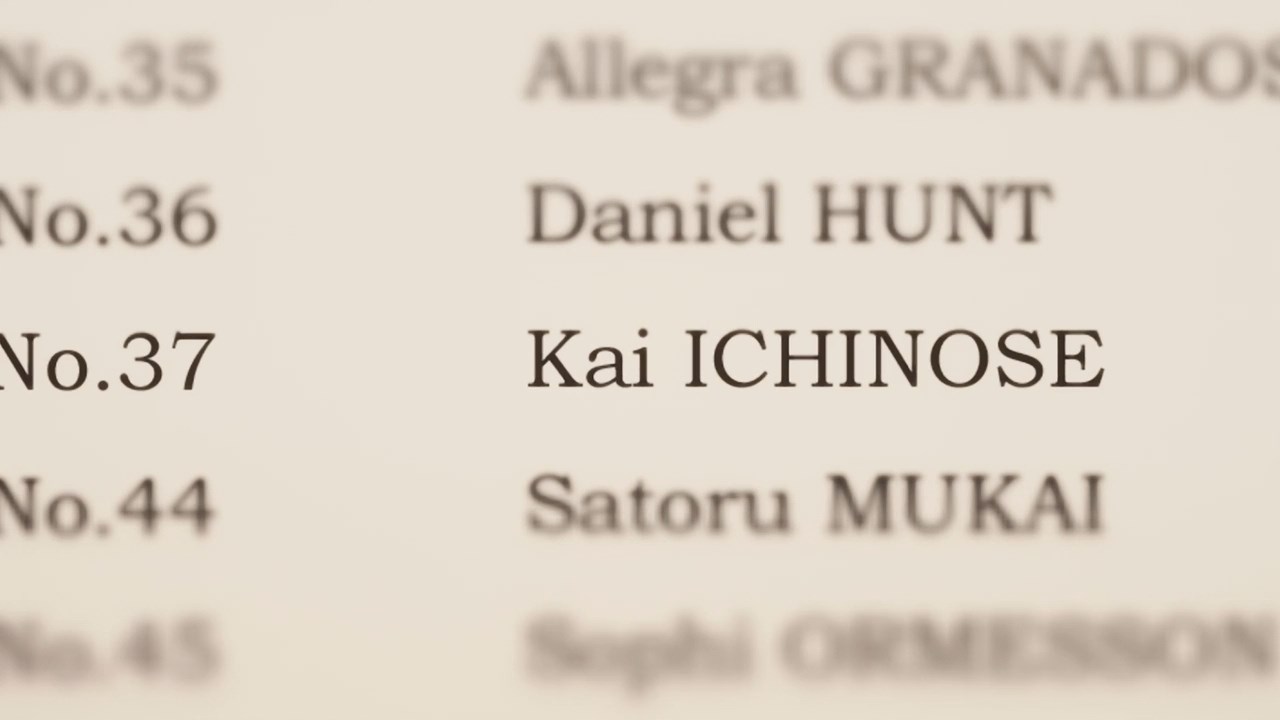 See his name over there? There’s no doubt that Kai will compete at the second round of the International Chopin Piano Competition. 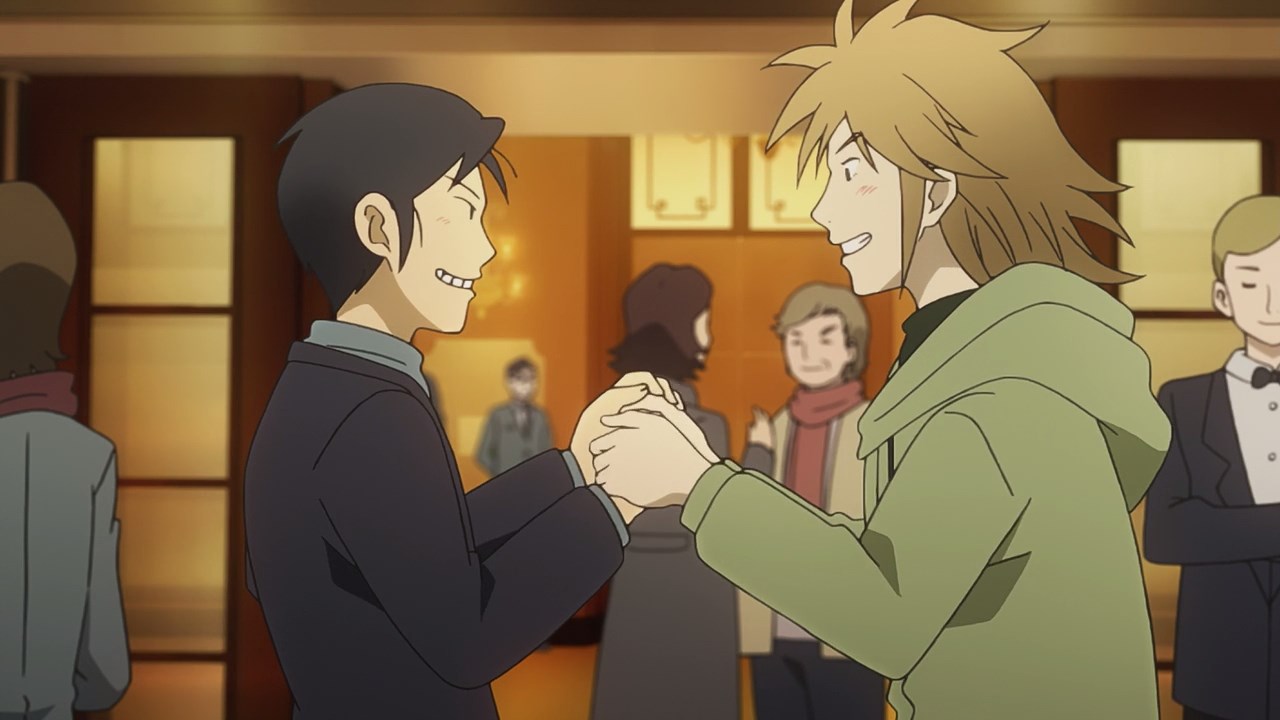 Even his compatriot Kousei Hirata was happy to see Ichinose qualify for the competition. Now, the only thing left for Kai to do is to win in order to make Sousuke Ajino and his mother Reiko proud.

Anyways, I’ll see you next time as Kai Ichinose will face tough competition in the second round. Of course, he’s not here to claim victory as Kai wants to make a lasting impression at Poland.