Posted on February 6, 2019 by benigmatica 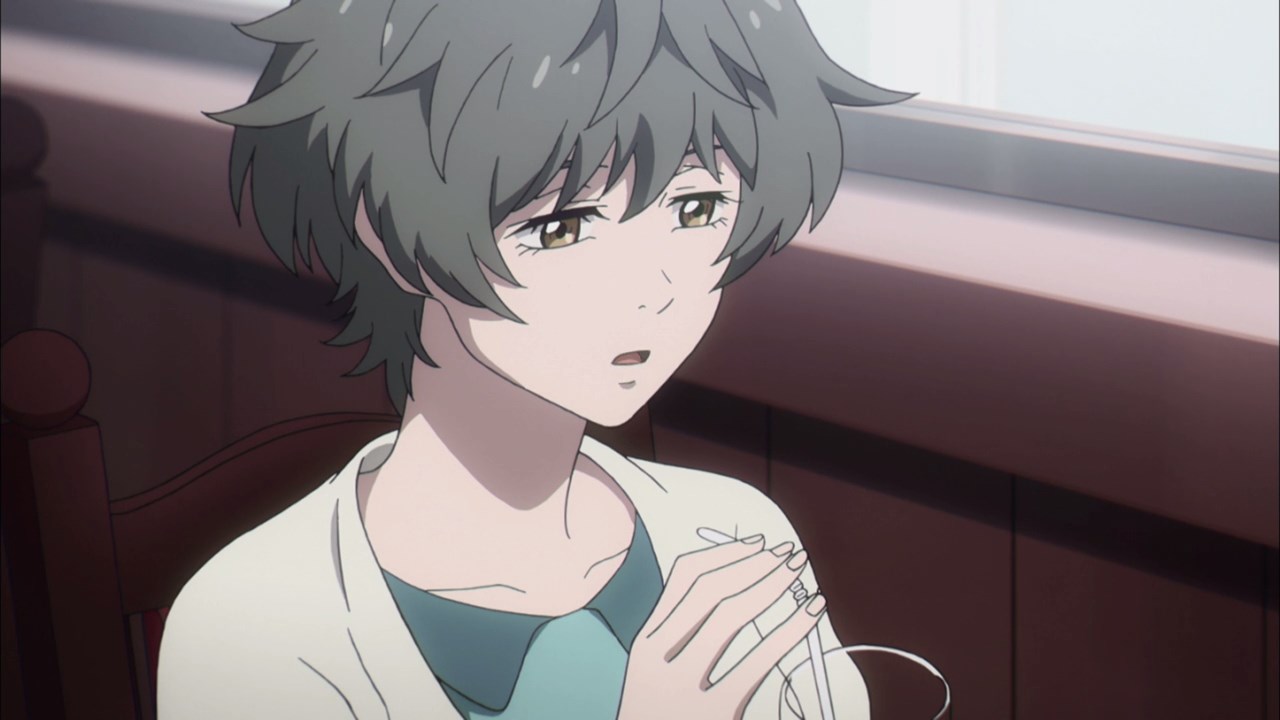 This is Aya Orihata, a middle-school student who’s asking a friend to have sex with her. 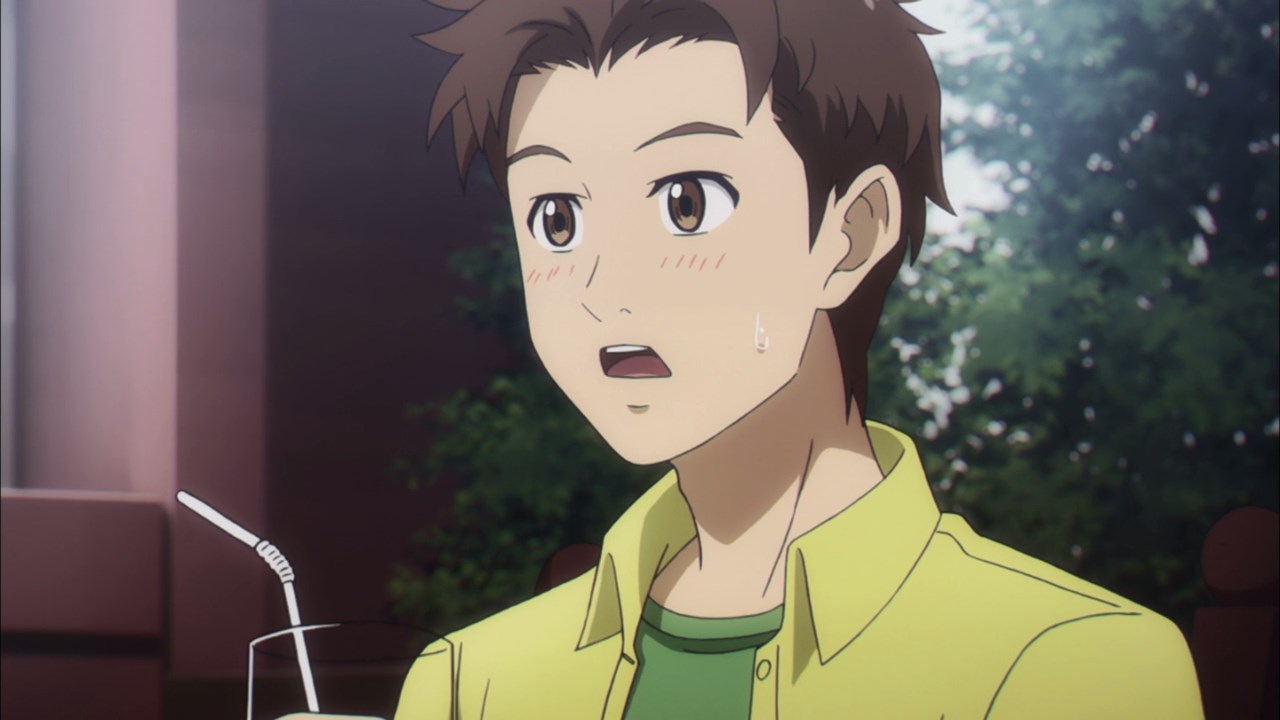 Said friend happened to be this guy named Masaki Taniguchi who came back to Japan after studying abroad at Cambodia.

It might feel so strange that Orihata is asking him to have sex with her, but the truth is that they’re lovers. But how did they end up in a relationship with each other? 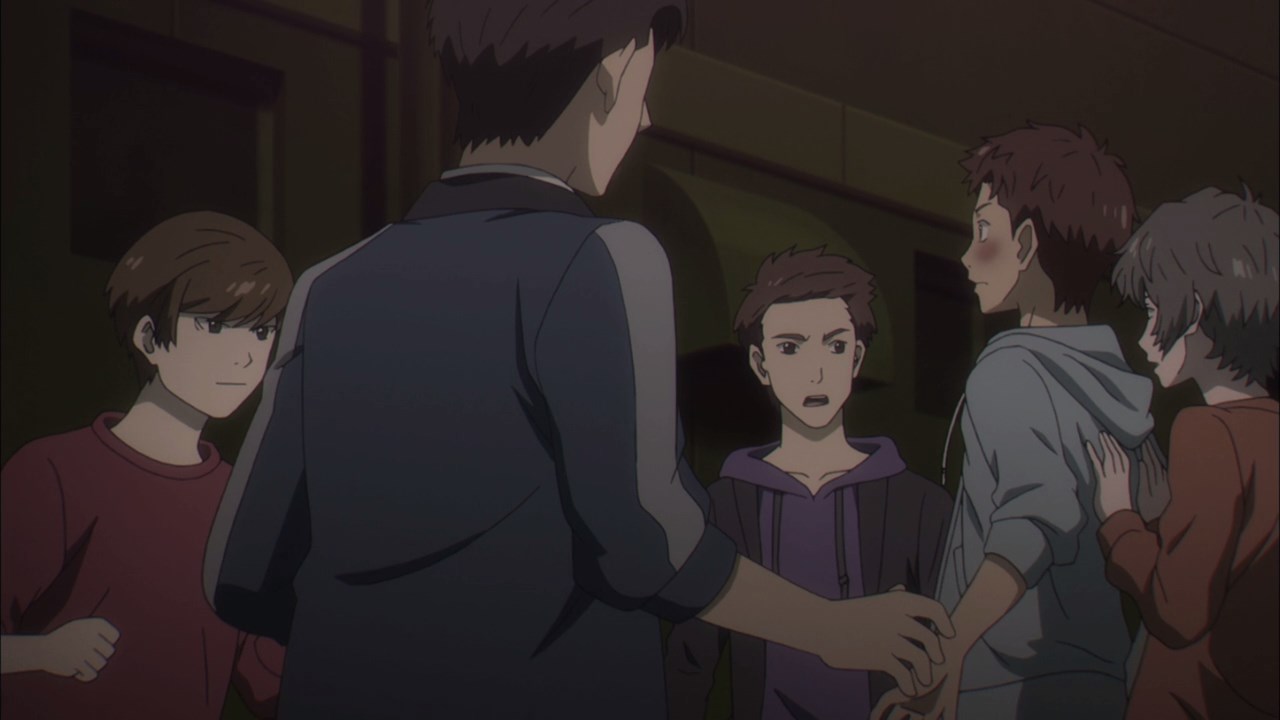 Turns out, it all started when Masaki Taniguchi defended Aya Orihata from bullies who instead of beating him to a pulp, they decided to rape Orihata instead. 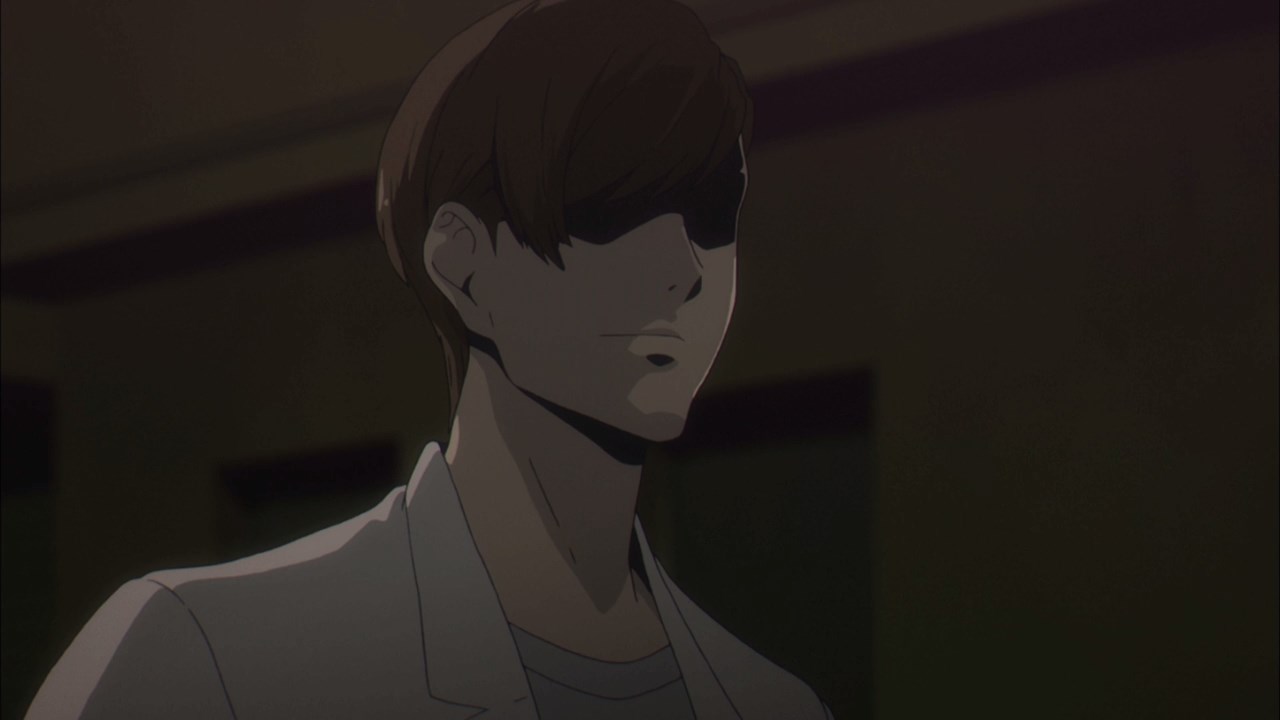 Fortunately, both Taniguchi and Orihata are saved when Jin Asukai showed up.

While I’m not sure how he did it towards those bullies, but Asukai-sensei rest assured that they’ll never hurt both Aya and Masaki ever again. 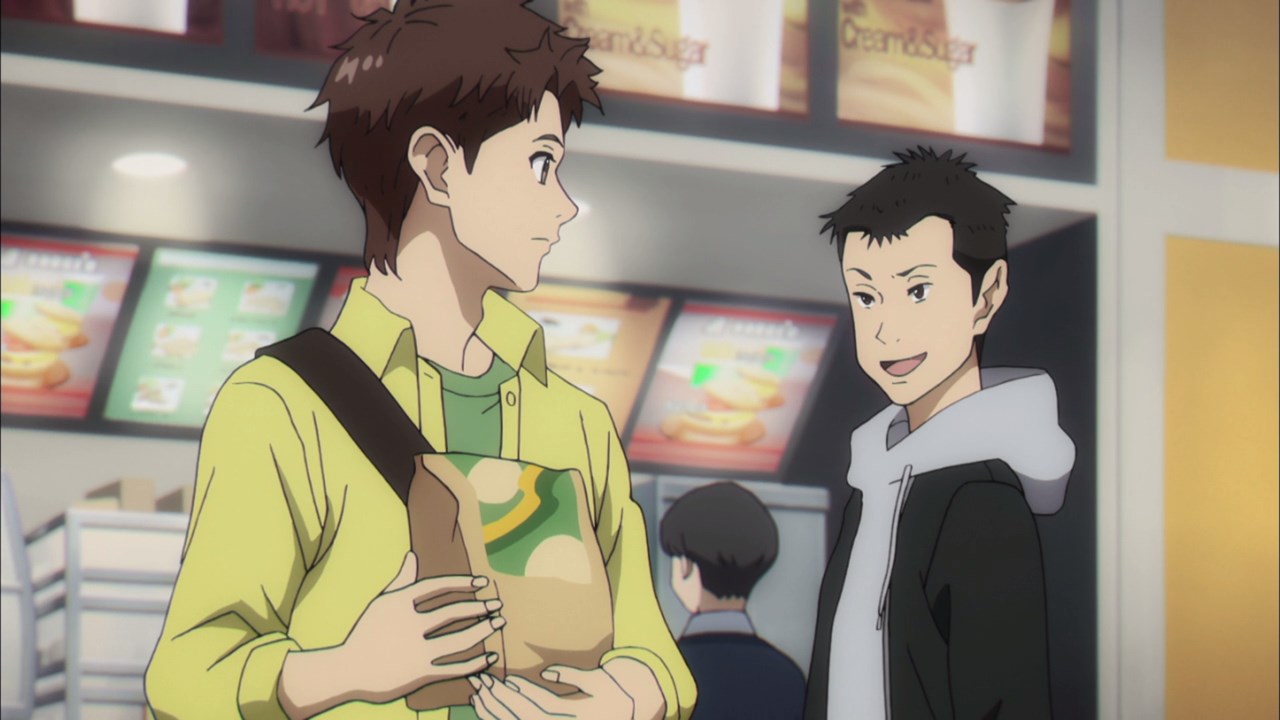 However, little did Masaki know is that Shinjiro has some intimate feelings for him. Then again, the problem is that Taniguchi has a girlfriend now. 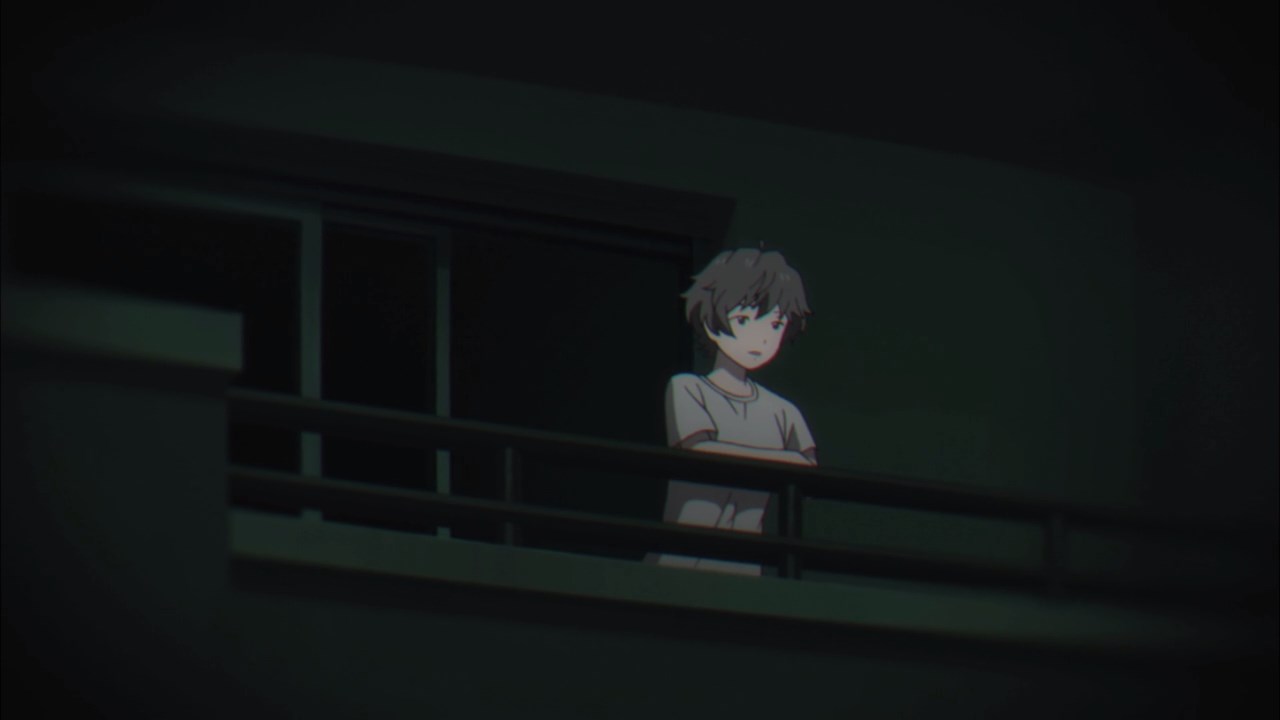 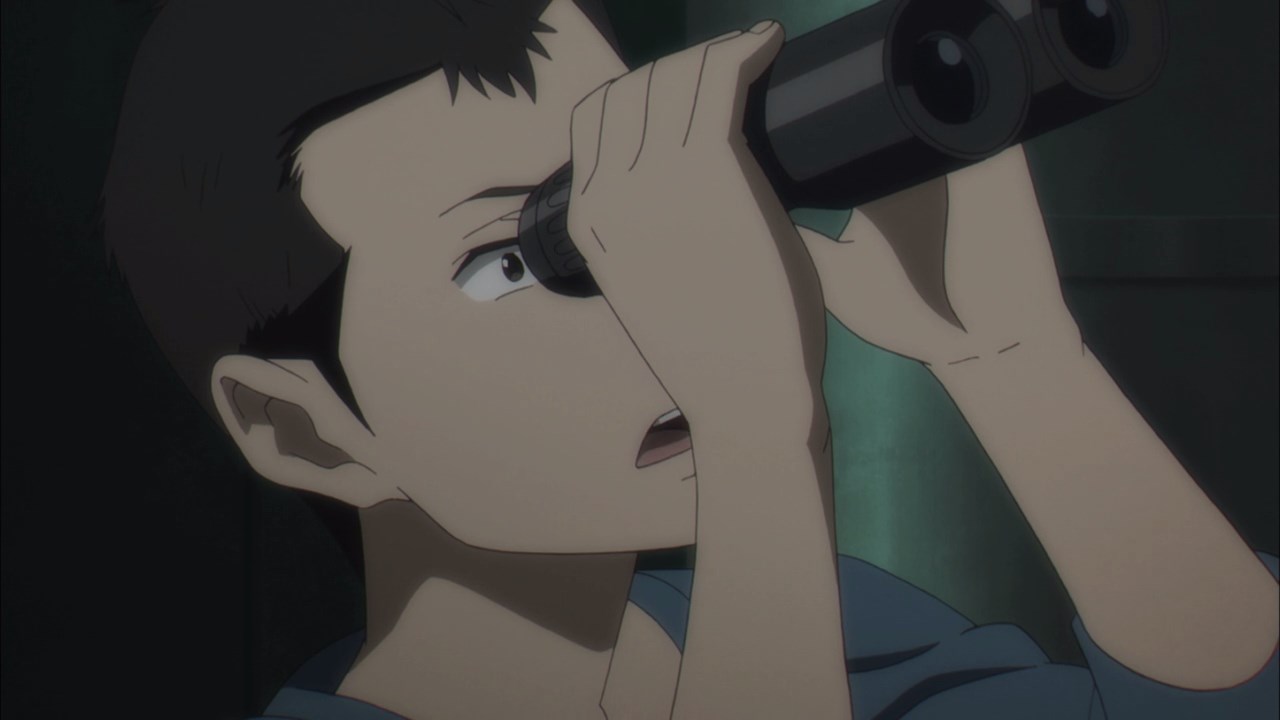 So, Anou decides to spy on Aya Orihata where she’s talking to someone or just mumbling to herself that Shinjiro couldn’t decipher.

Still, I feel that Shinjiro Anou felt jealous in a long time, especially when someone wants to steal Masaki Taniguchi away from him. 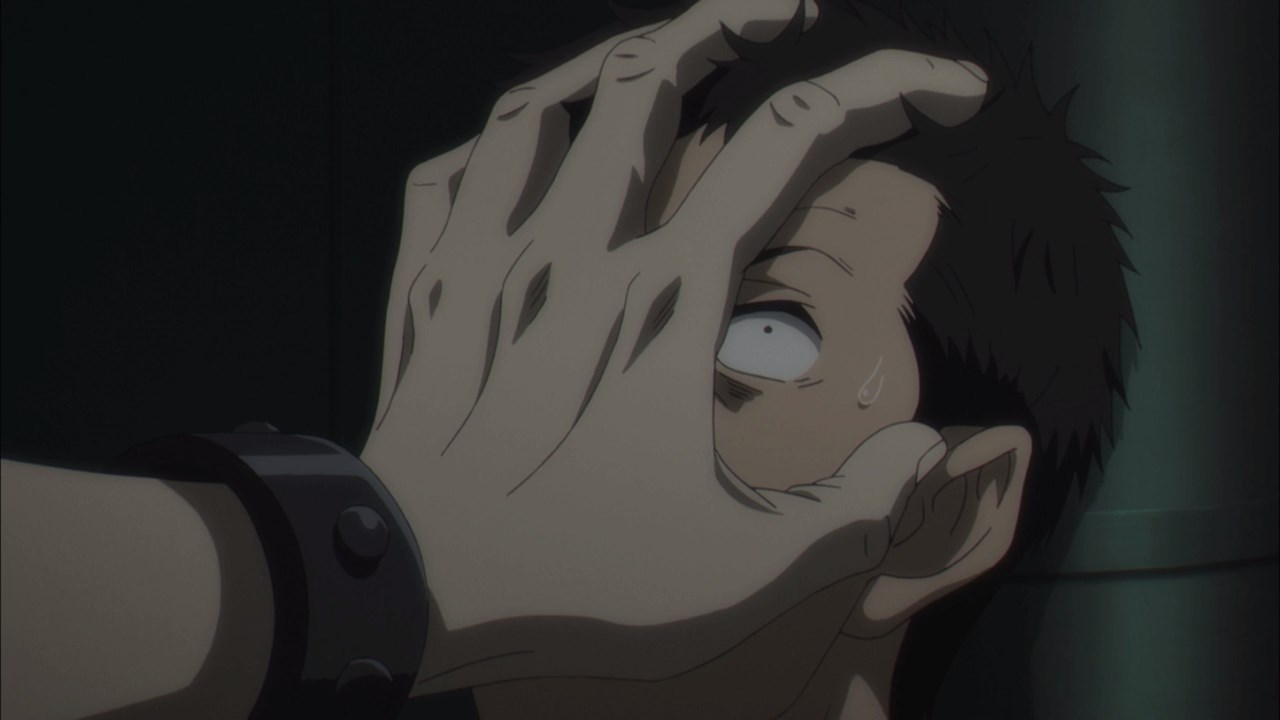 But just as he got deeper towards Orihata, Anou was attacked by a mysterious person… 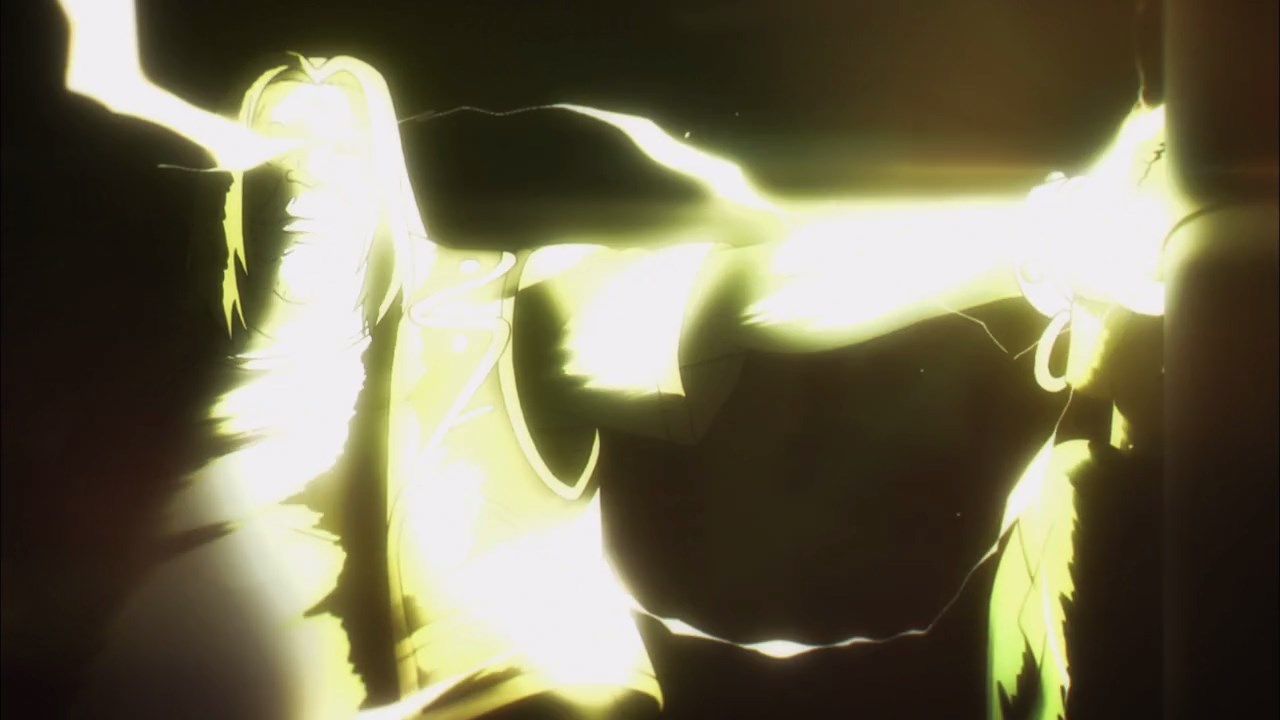 …who is only known as Spooky E as he delivered an electric shock at Shinjiro. Of course, there’s more than just shocking him. 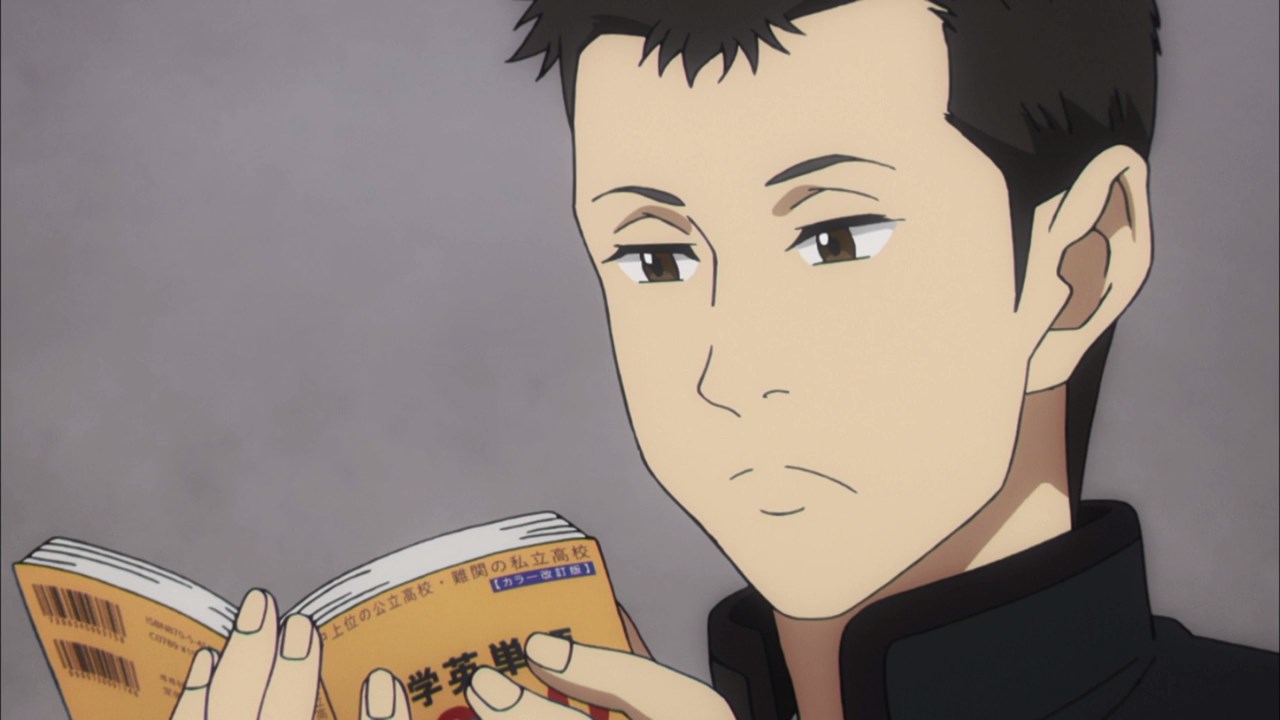 In fact, Spooky E controlled Shinjiro Anou where he ordered Shinjiro to discard his previous memories, and attend at Shinyo Academy in order to receive orders from the Towa Organization.

While I’ll never know about the Towa Organization nor Spooky E’s next orders to Anou, I have a bad feeling that Earth might be doomed. 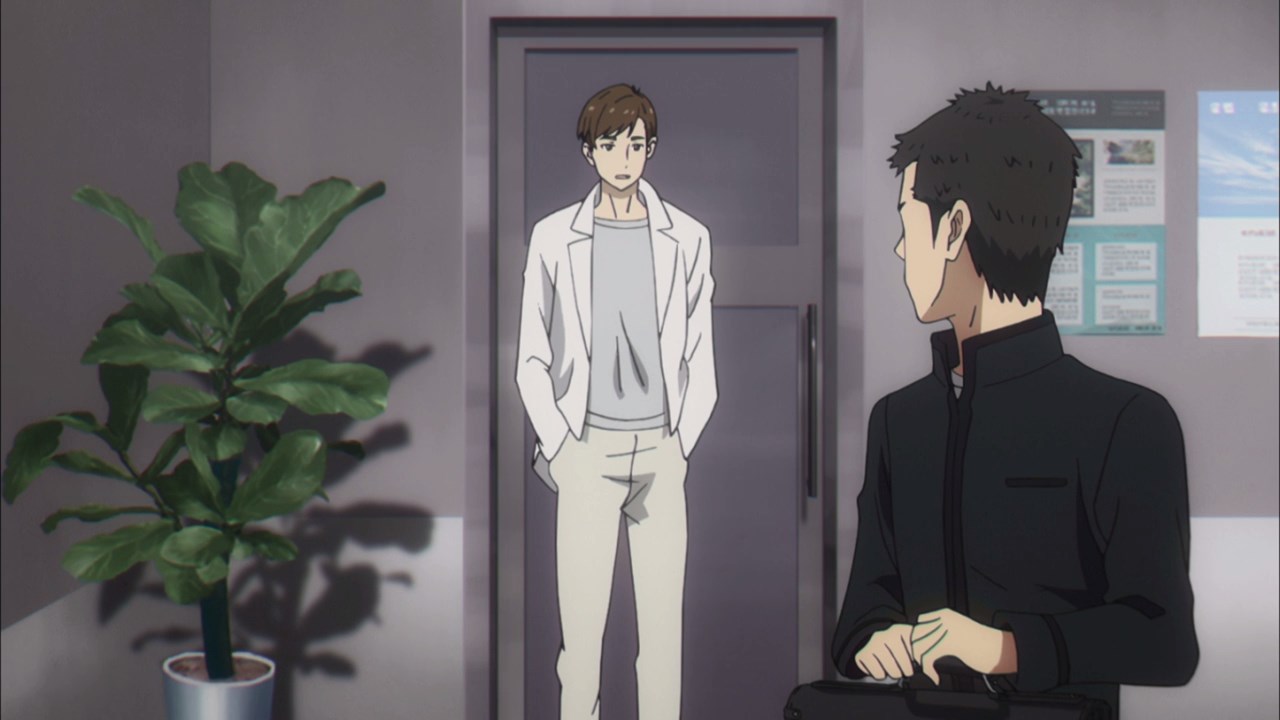 On the other hand, here’s Jin Asukai as he wants to talk to Shinjiro Anou about his problems, not knowing that Shinjiro is being controlled by the Towa Organization. 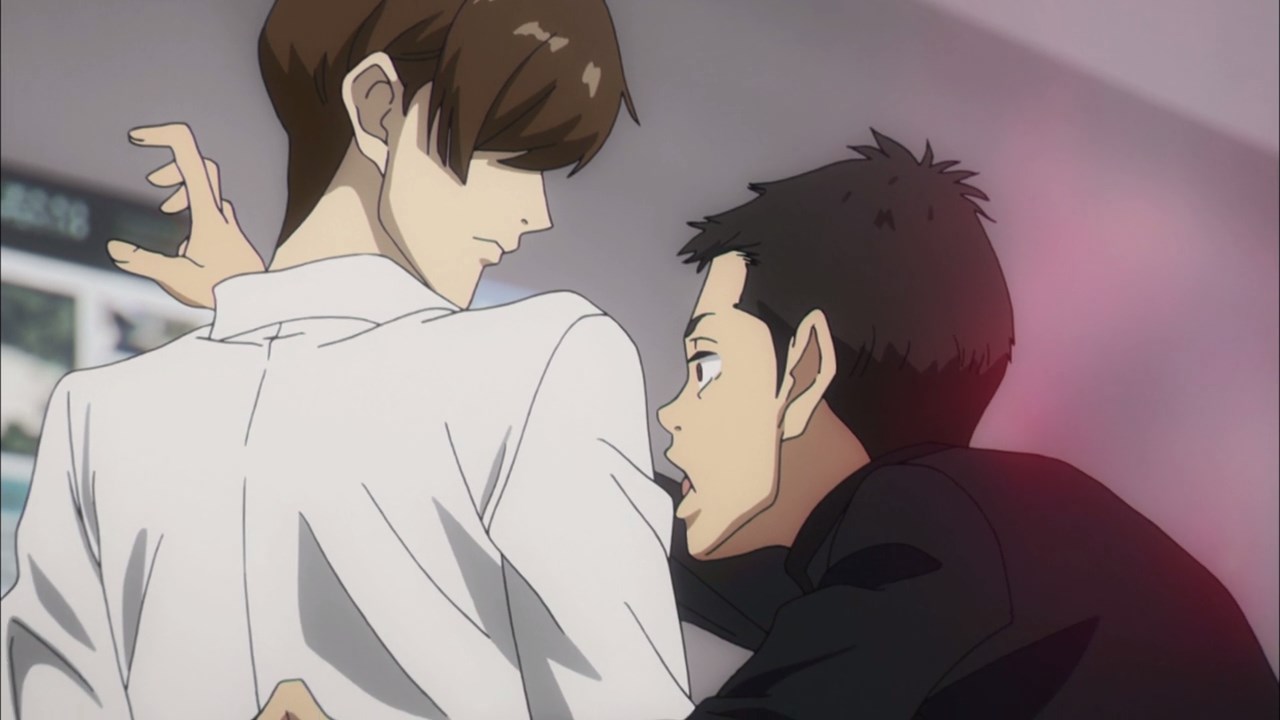 Then again, Asukai-sensei is aware that Anou is targeting him, so he attacked Shinjiro until his student becomes a meek person, not being controlled by some alien like Spooky E.

Come to think of it, is Jin Asukai has the power to manipulate their minds by touching them, all thanks to the Imaginator unlocking his true calling? 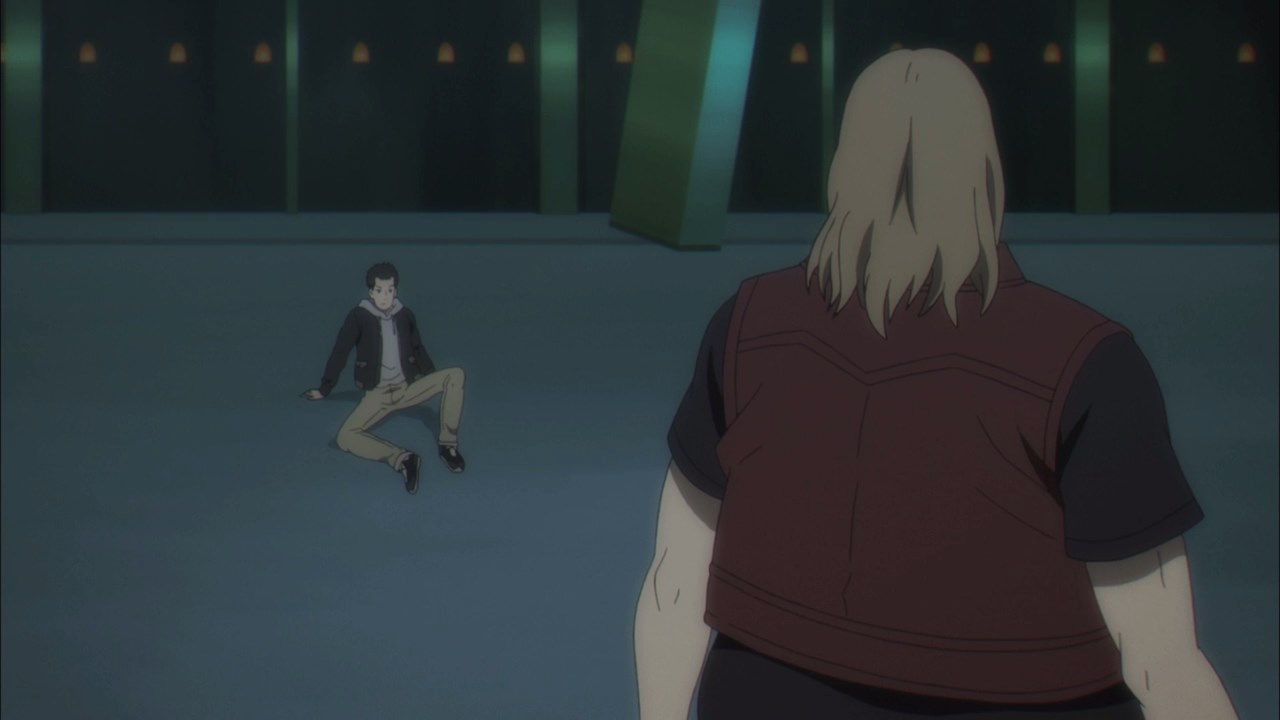 Regardless, looks like Shinjiro Anou is no longer being controlled by Spooky E, which the alien got pissed that he’ll attack Shinjiro again, making sure that Spooky E can finally control Anou permanently. 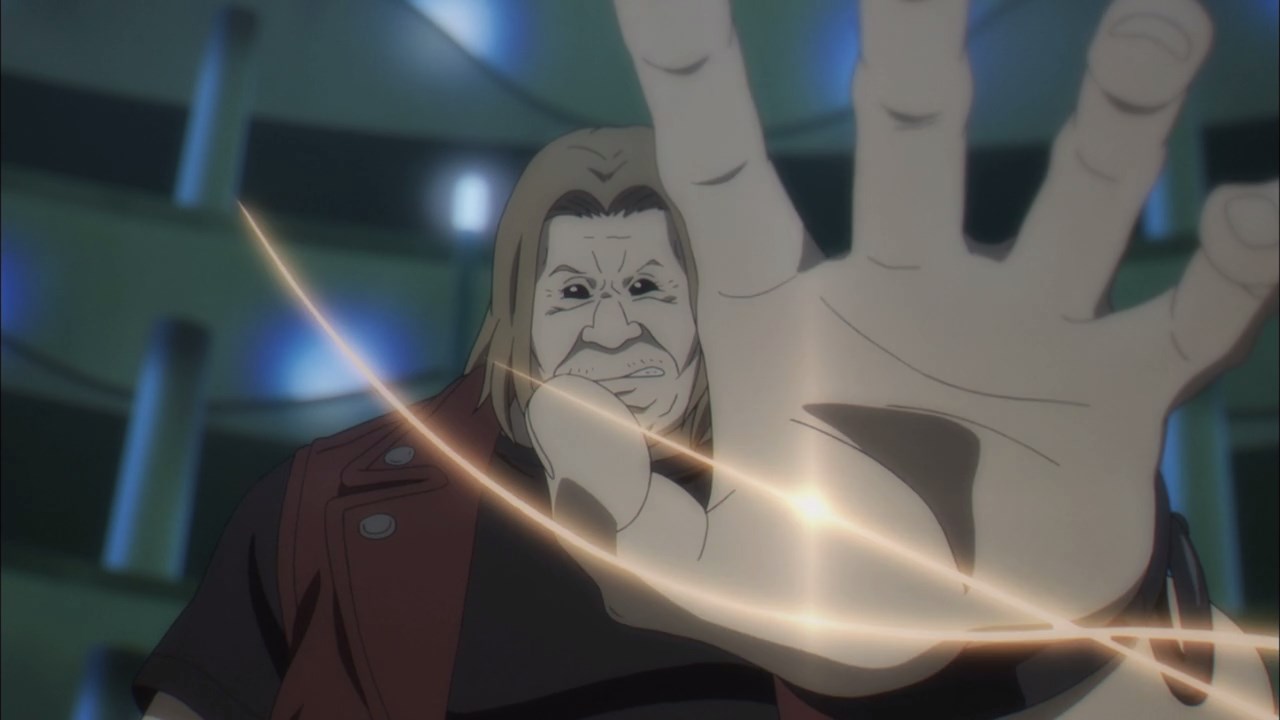 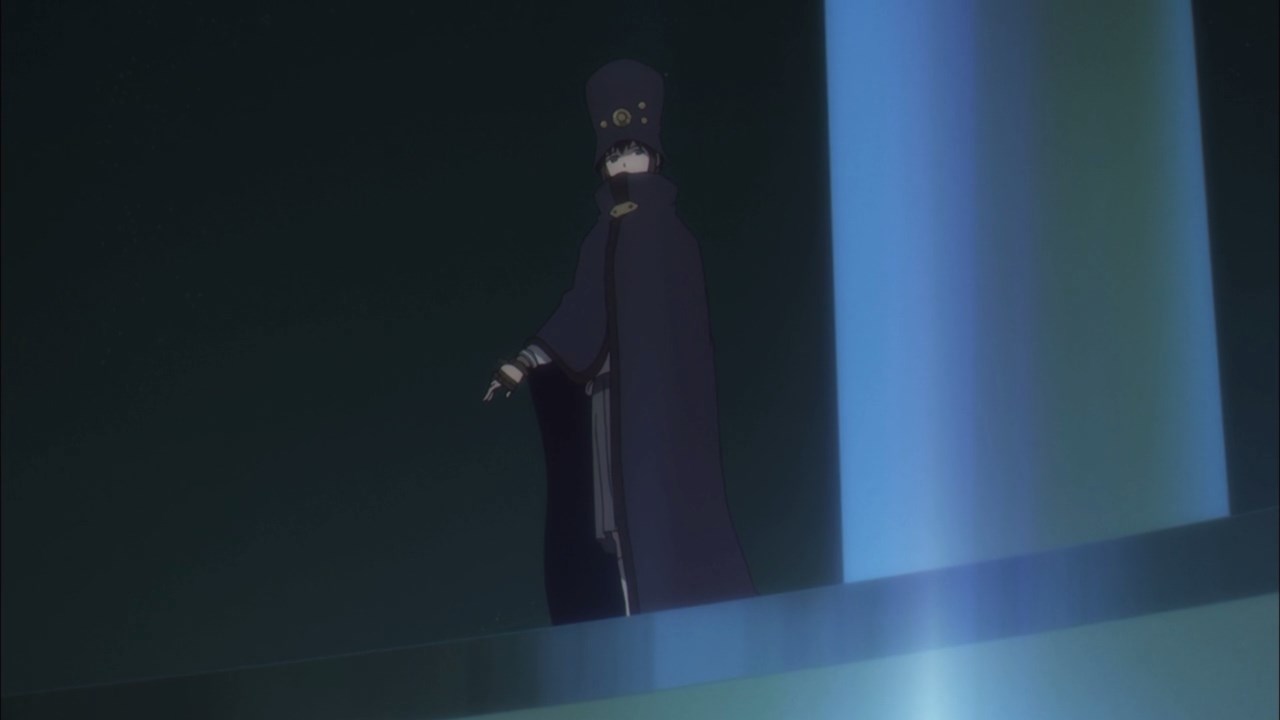 Why it’s none other than Boogiepop as the grim reaper won’t hesistate on cutting Spooky E into pieces should he proceeds to hurt Shinjiro Anou. Then again, Shinjiro won’t feel anything towards Masaki as his emotions were taken from Spooky E.

As for Spooky E, he doesn’t want to deal with Boogiepop anyway so he ran away for now… 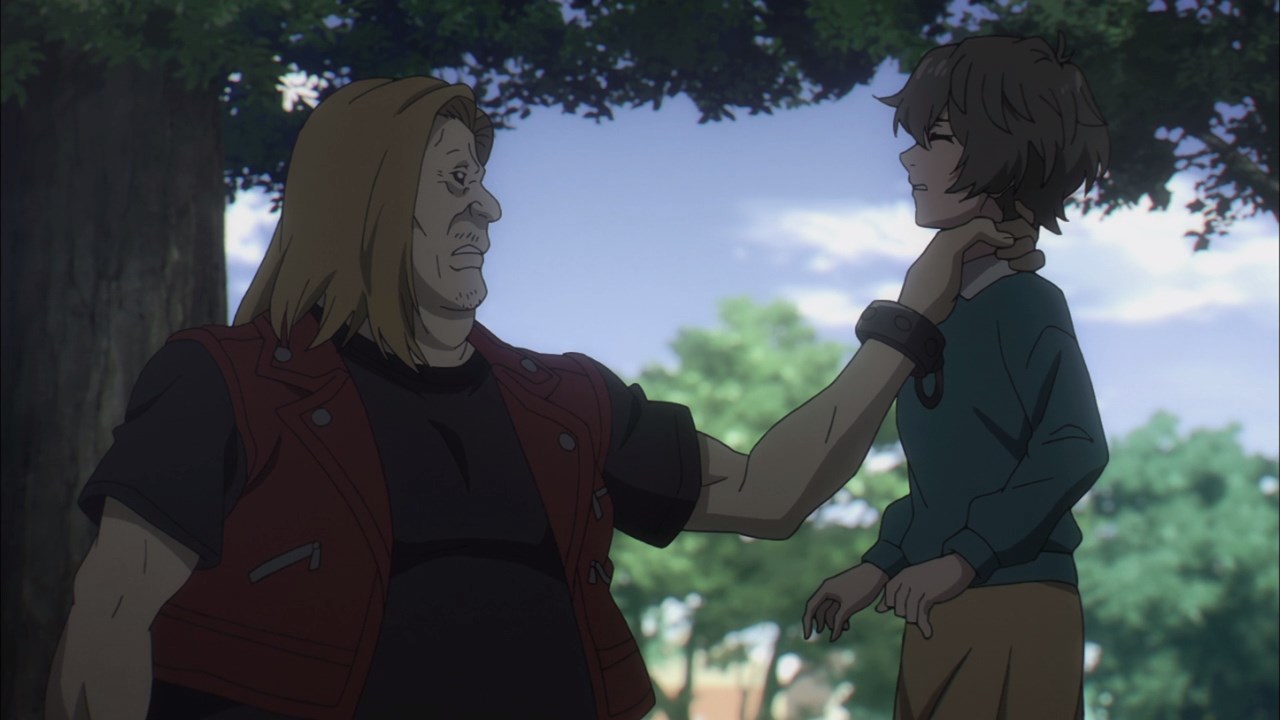 …and instead channels his frustation on Aya Orihata, who is known as Camille, as Spooky E failed to brainwash Shinjiro Anou completely.

Wait, is Aya an alien just like Spooky E? It’s no wonder why she wants to have sex with Masaki Taniguchi. 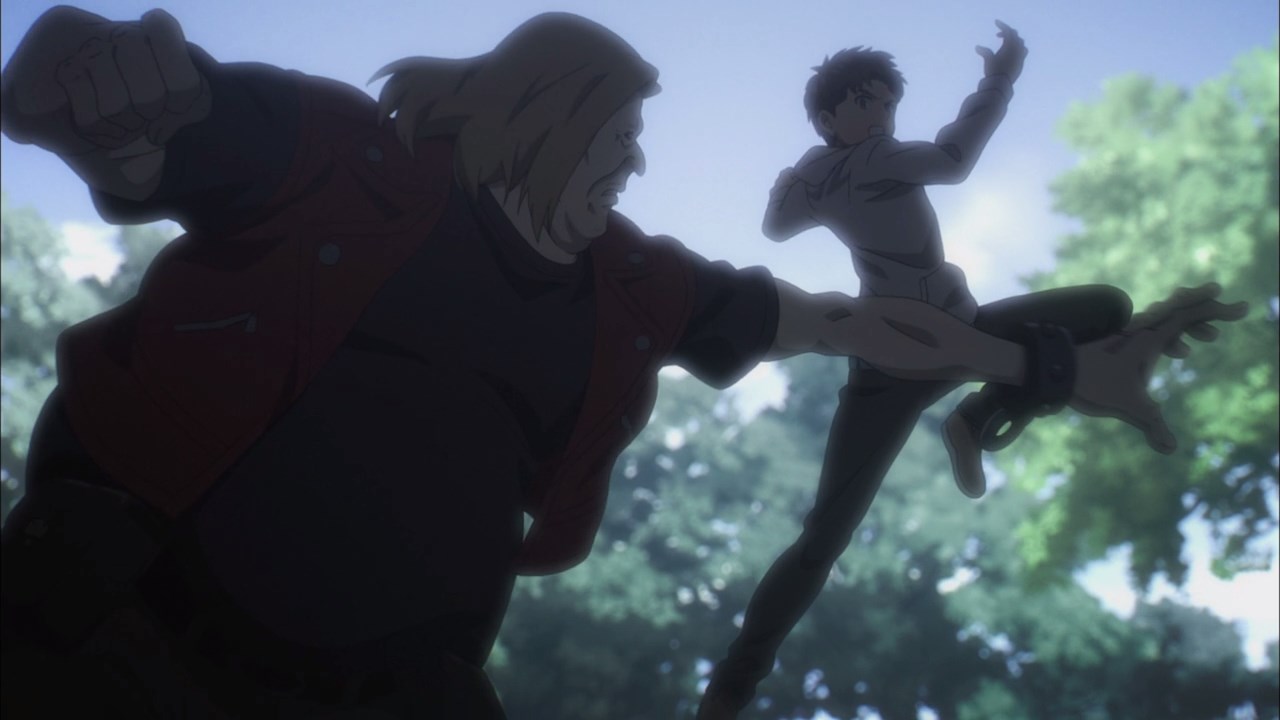 But speaking of Masaki Taniguchi, looks like he saw Aya Orihata getting hurt by Spooky E and therefore fought against the alien in order to save his girlfriend.

Gotta say that Masaki is capable of fending off Spooky E, but he can’t beat the alien using martial arts alone. 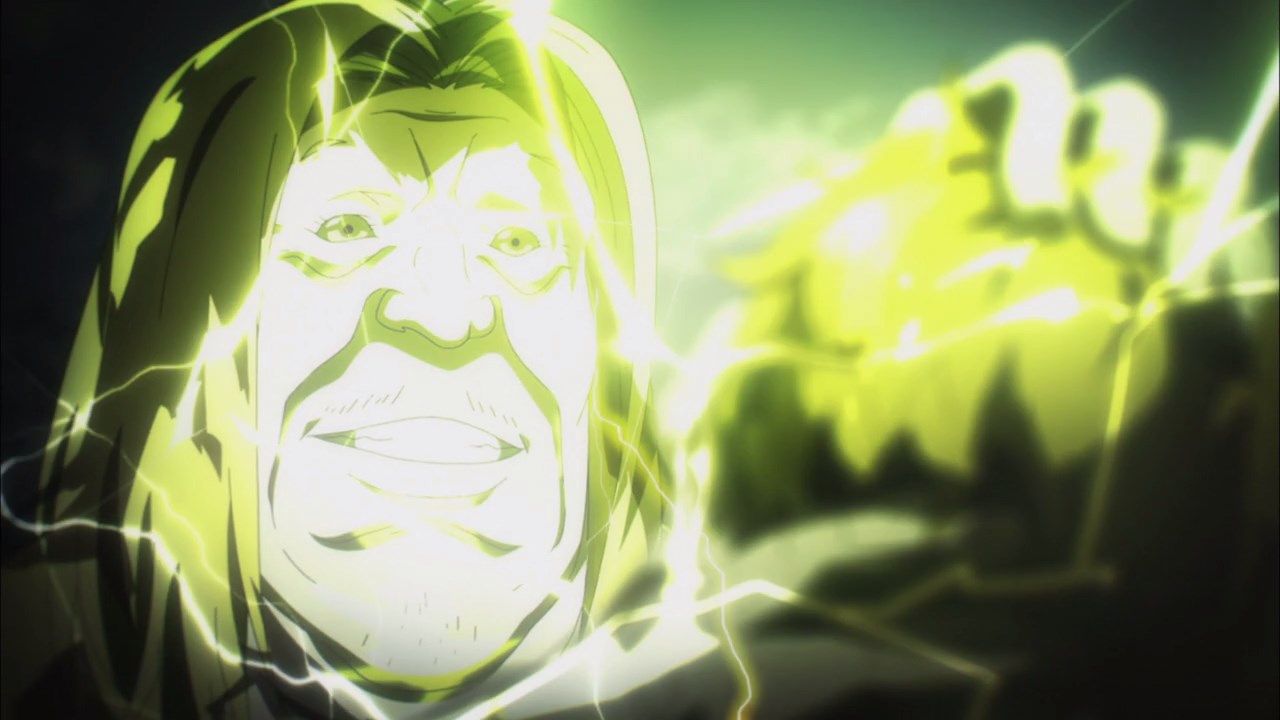 Unfortunately for Taniguchi, Spooky E proved to be the stronger foe as he shocks Masaki until he doesn’t remember his encounter with the alien. 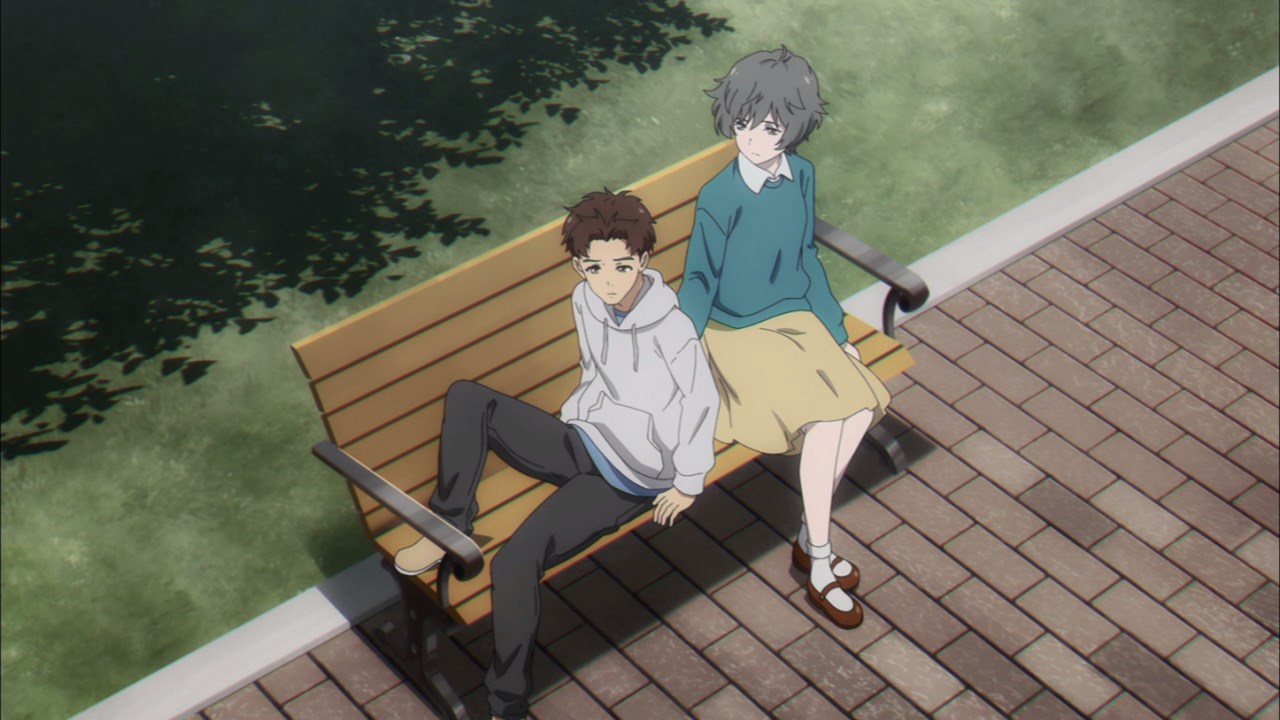 Of course, she fears that Masaki will be in danger if he’s involved in Spooky E’s vaguely evil plan. Therefore, she has no choice but to work with Spooky E, starting with finding Boogiepop’s whereabouts as he considers the grim reaper as a threat. 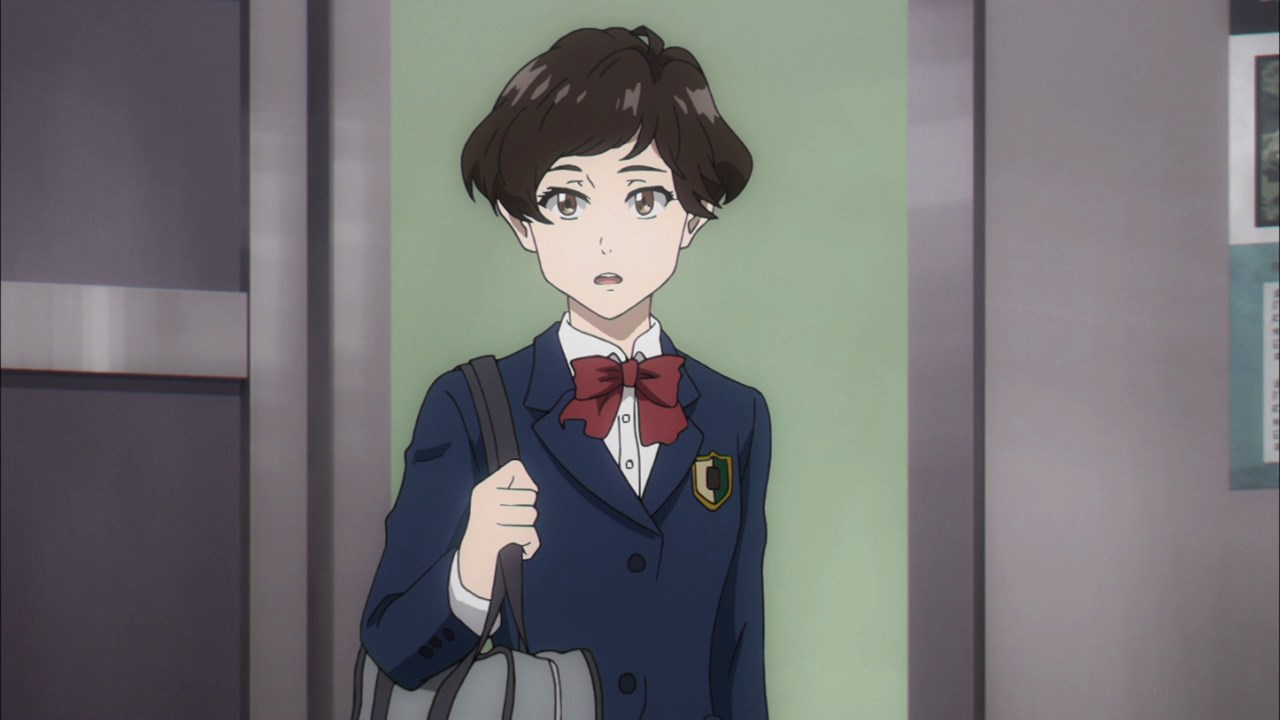 Meanwhile, here’s Kotoe Kinukawa as she asked some help in regards to his cousin’s strange actions. Yeah, she’s talking about Jin Asukai. 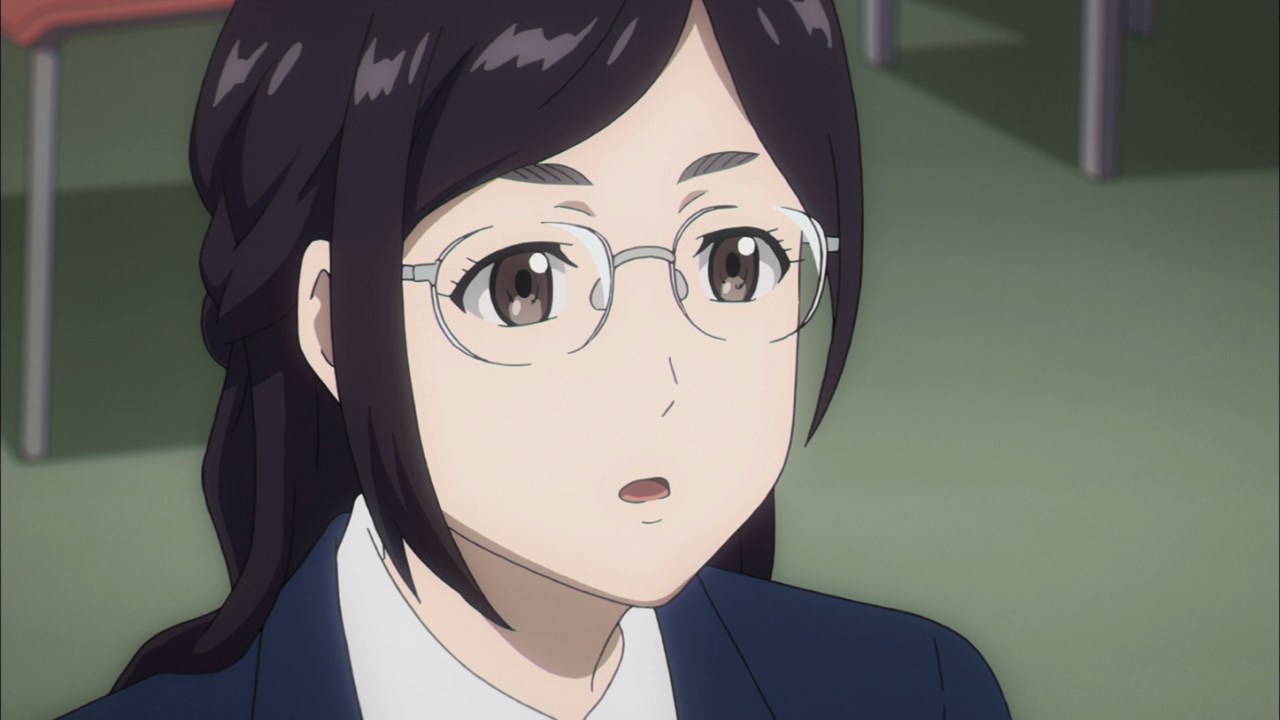 Anyways, Kinukawa asked Kazuko Suema for help on investigating Asukai’s activities, which Kotoe claimed that he has some wierd stains in his body apart from coming home late.

Hmm, I wonder if it has something to do about Jin grasping people’s hearts and manipulate it from the inside? 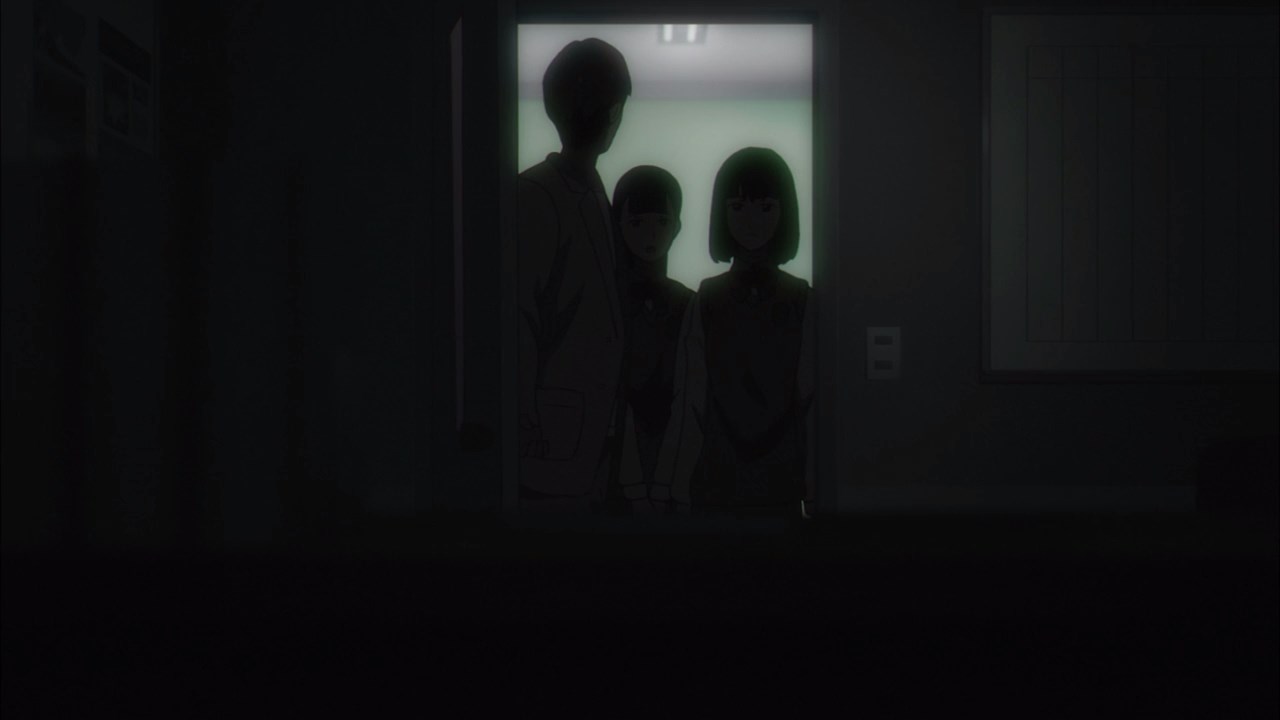 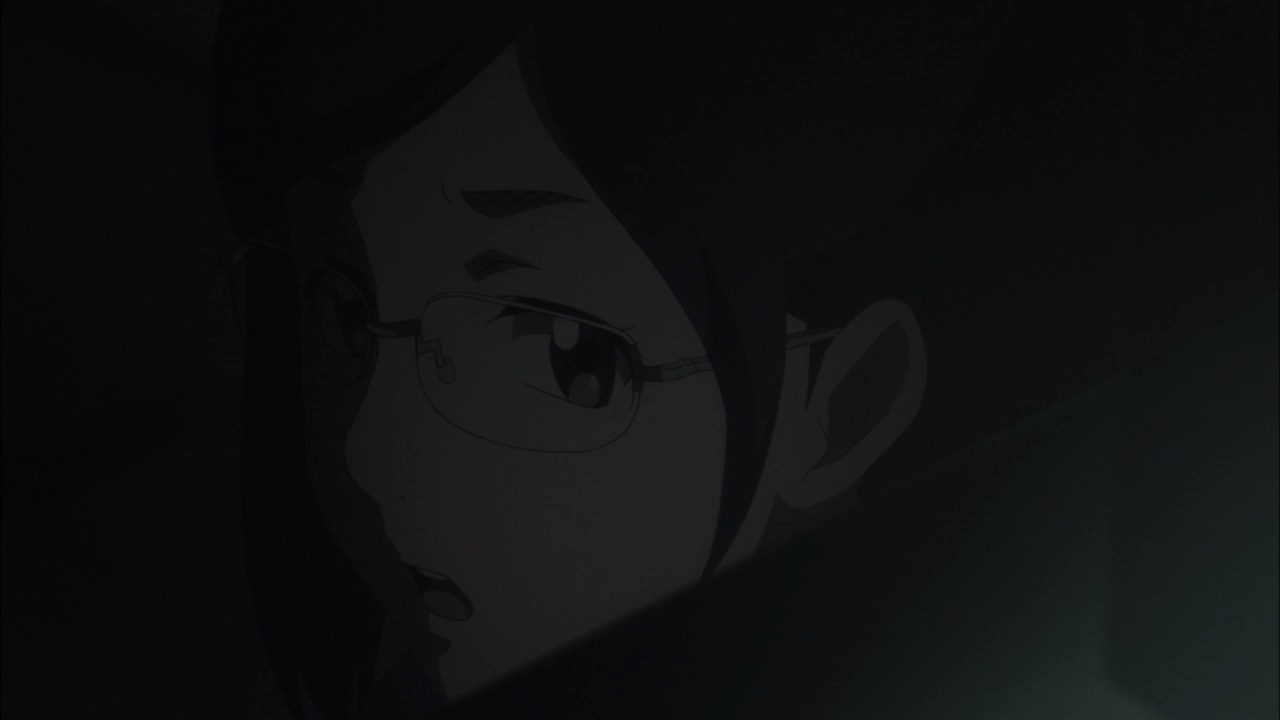 In any case, Suema take Kinukawa’s offer and investigates Jin Asukai and his activities, starting by hiding at the prep school and observe as Asukai-sensei brought two students to his room.

And what Kazuko Suema saw was the most bizarre one that she couldn’t describe it through words alone.

It turns out that Jin Asukai ordered both girls to take their top off and touched their chest, which Asukai-sensei sends some weird energy to their bodies just by touching their hearts.

Afterwards, both girls acted strange that they’re no longer scared anymore. What are they scared of? Ending their lives? Say it ain’t so!

Still, I fear that Asukai-sensei is making his students into weird people, something that’ll delight the Imaginator. 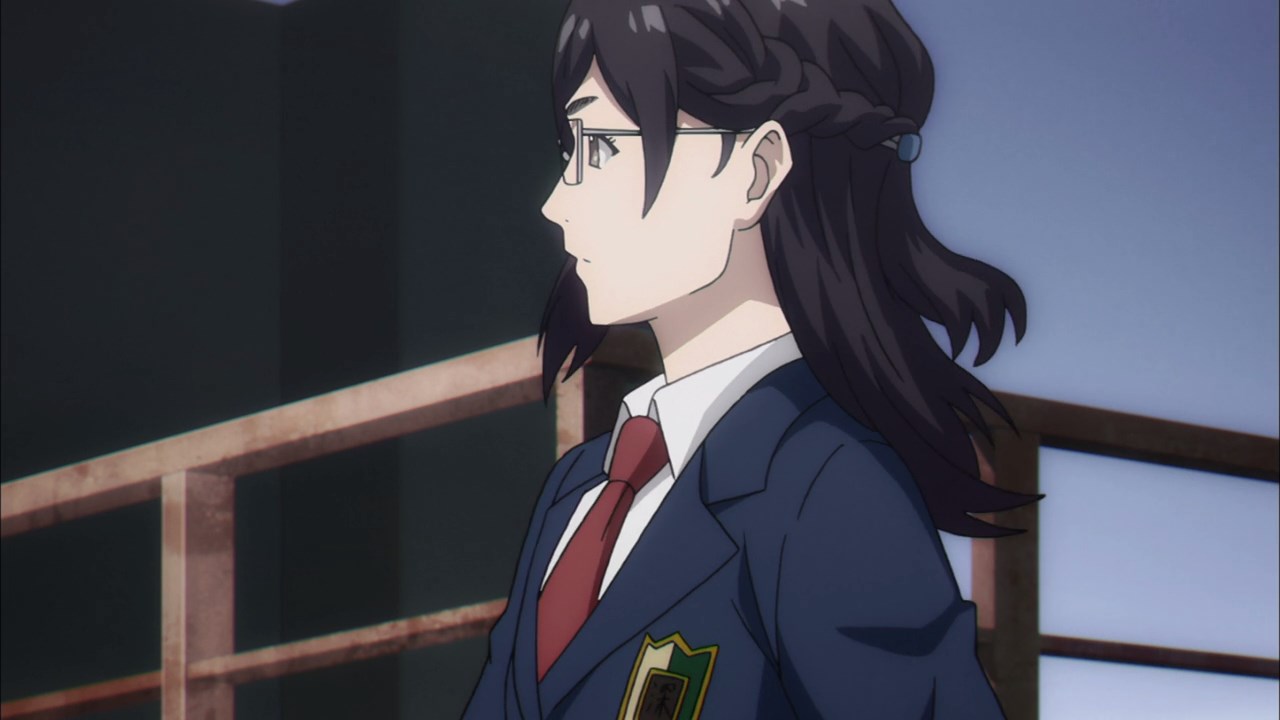 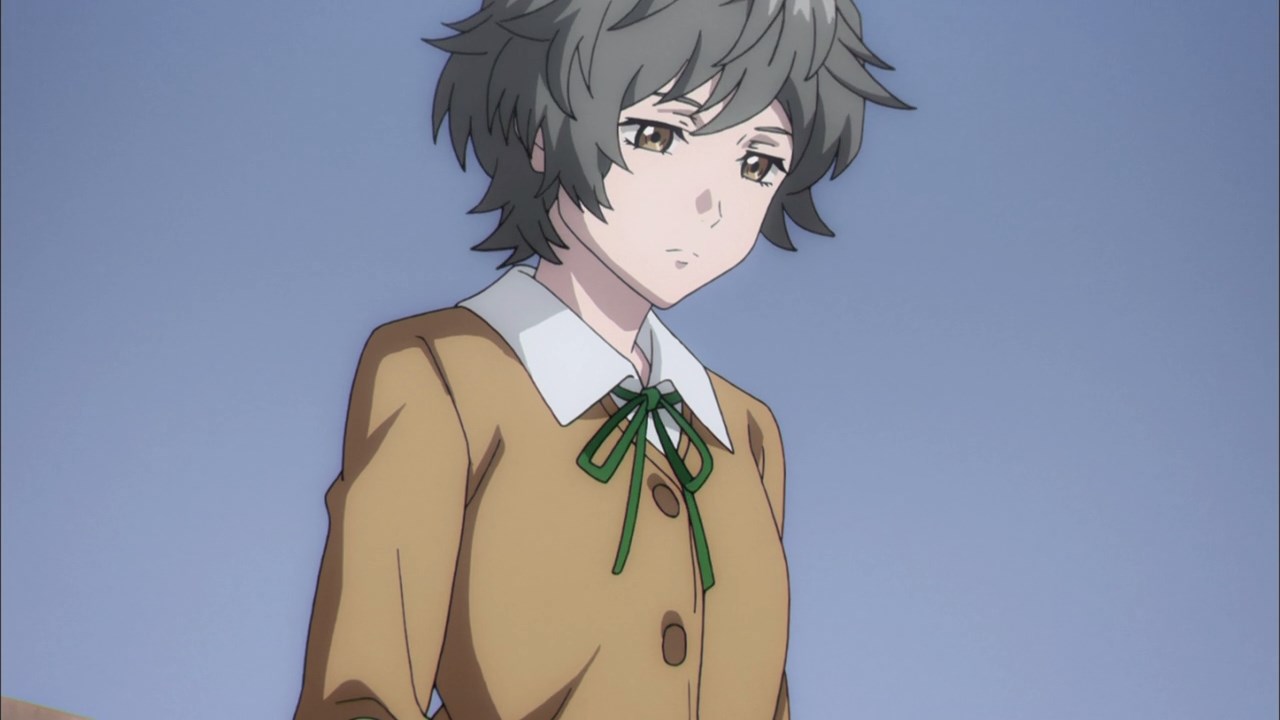 …which turned out to be Aya Orihata as she’s about to jump off from the rooftop. Oh please, enough with the suicide thing. 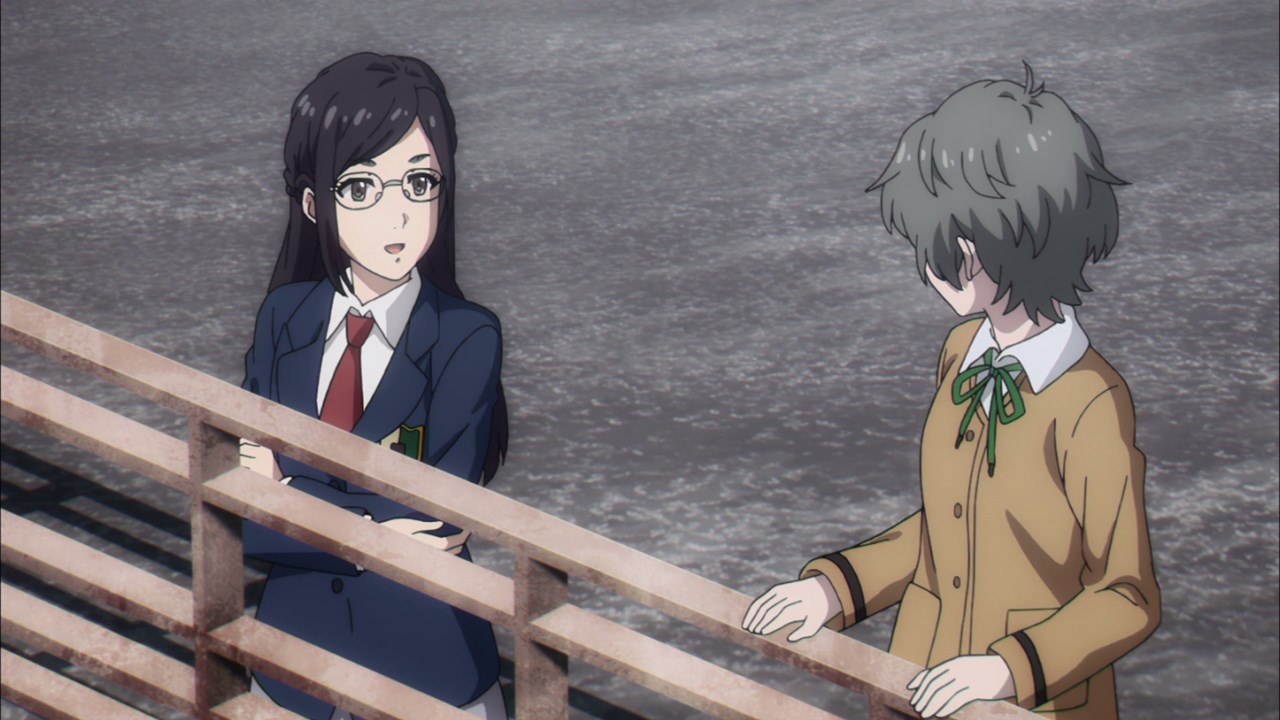 Anyways, Suema told Orihata not to jump off from the rooftop as there’s someone who commited suicide before. And really, I don’t want Aya Orihata to become the next Suiko Minahoshi, which is why Kazuko told her that commiting suicide is worse because it’ll affect everyone, including her enemies who will gloat on how pathetic she is.

Still, the reason why she’s at the rooftop because Aya is curious about Boogiepop. Of course, she and Spooky E will eventually encounter the grim reaper and fight together with ther Imaginator for a three-way battle. But you know what, I think it’s time for Aya Orihata (or Camille) to leave Towa Organization and have a peaceful life with Masaki Taniguchi. Then again, as long as Spooky E is around, Masaki Taniguchi and his classmates like Shinjiro Anou will be threatened.

With that said, I’ll see you next time and let’s hope that Orihata will have a happy ending with Taniguchi.