The Rising of the Shield Hero Episode #05

Posted on February 7, 2019 by benigmatica 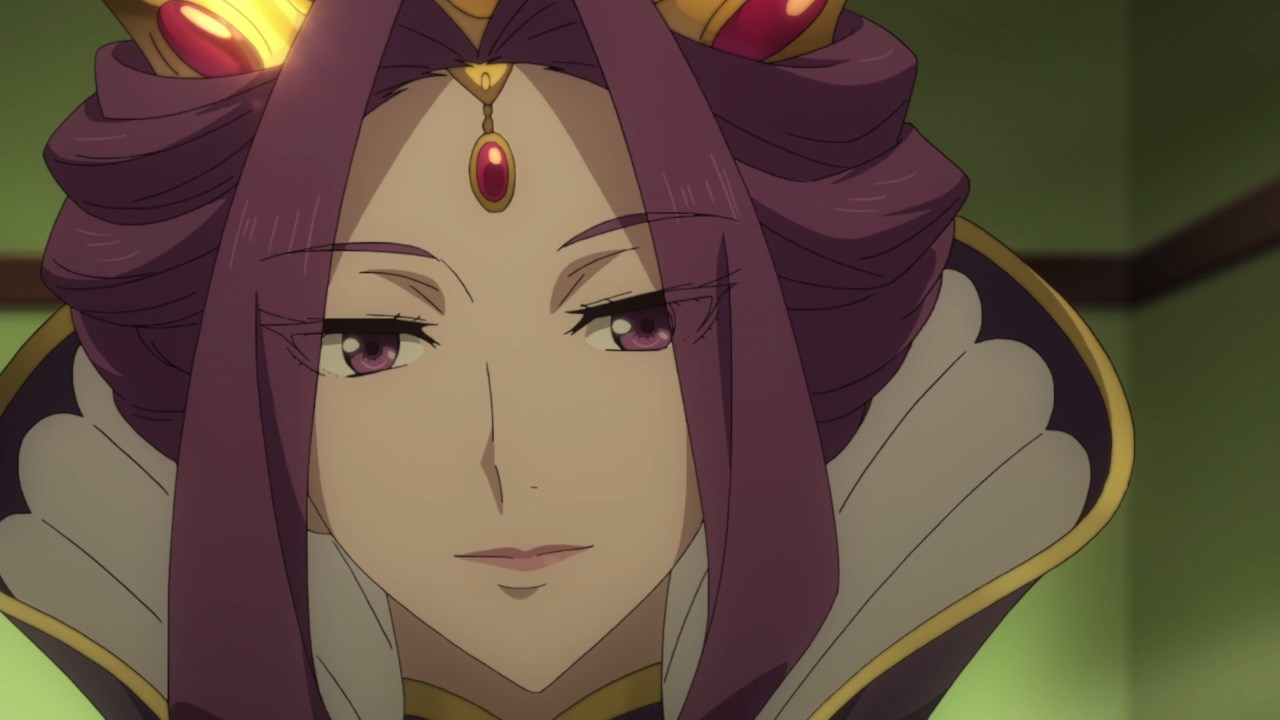 I would like to introduce you to the Queen Regeant of Melromarc as while she’ll be important later on, the Queen knows that both the King and Princess Malty are up to no good, especially when treating the Shield Hero like dirt.

Remember what happened in the previous episode? That was the last straw for the Queen, yet she’s waiting for the moment to bring them down! 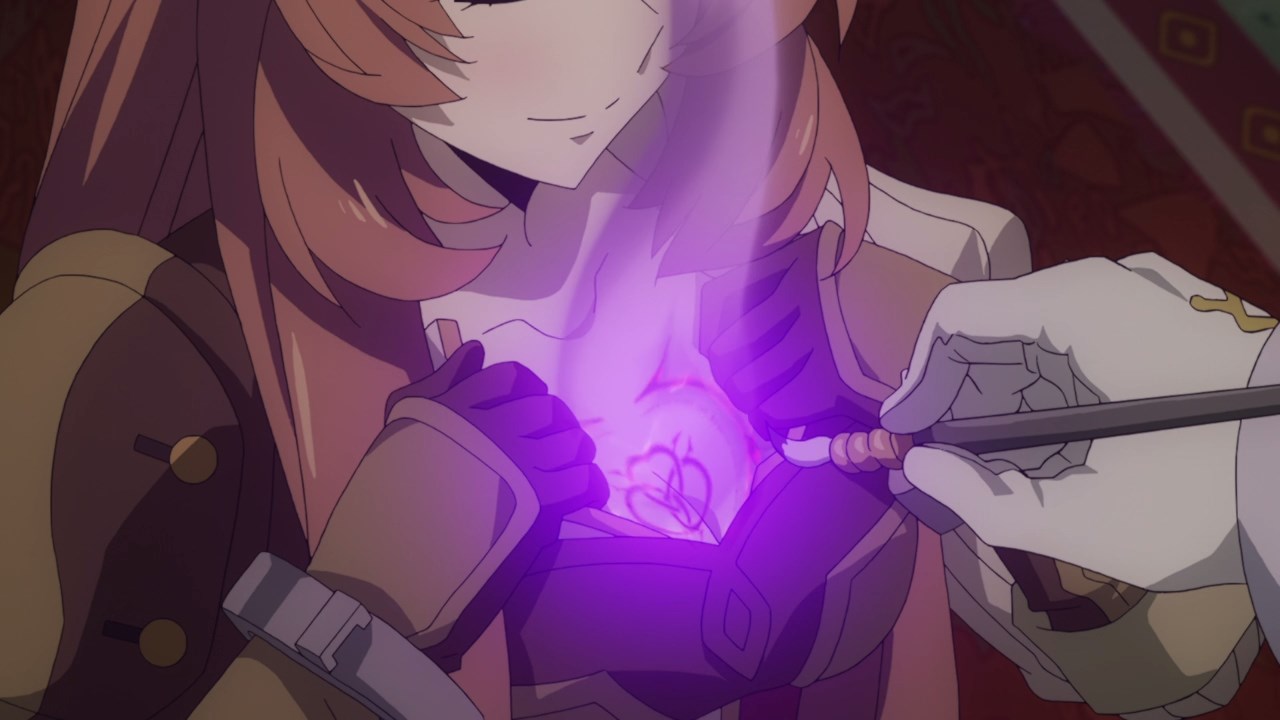 Meanwhile, here’s Raphtalia as she’s regaining her pact with Naofumi Iwatani after Princess Malty interferred the fight against Motoyasu Kitamura, then ordered some witch to undo the slave contract. And really, I don’t want Raphtalia being treated as a sex slave to someone else.

In any case, the Slave Trader made a stronger slave crest, although I’m not sure if it’s strong enough to undo it. 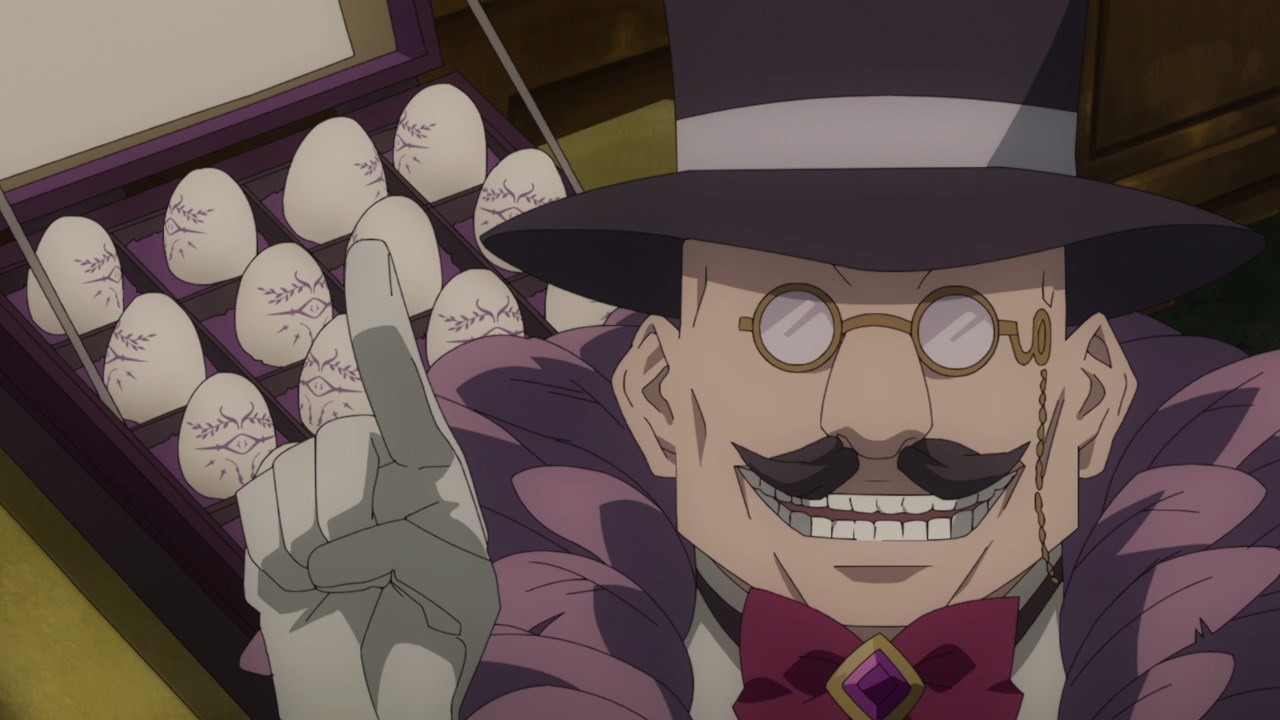 Speaking of the Slave Trader, he’s gonna give Naofumi an offer where the Shield Hero must pay 100 silver coins for an egg. The Slave Trader said that there’s a chance that an egg might hatch a dragon… 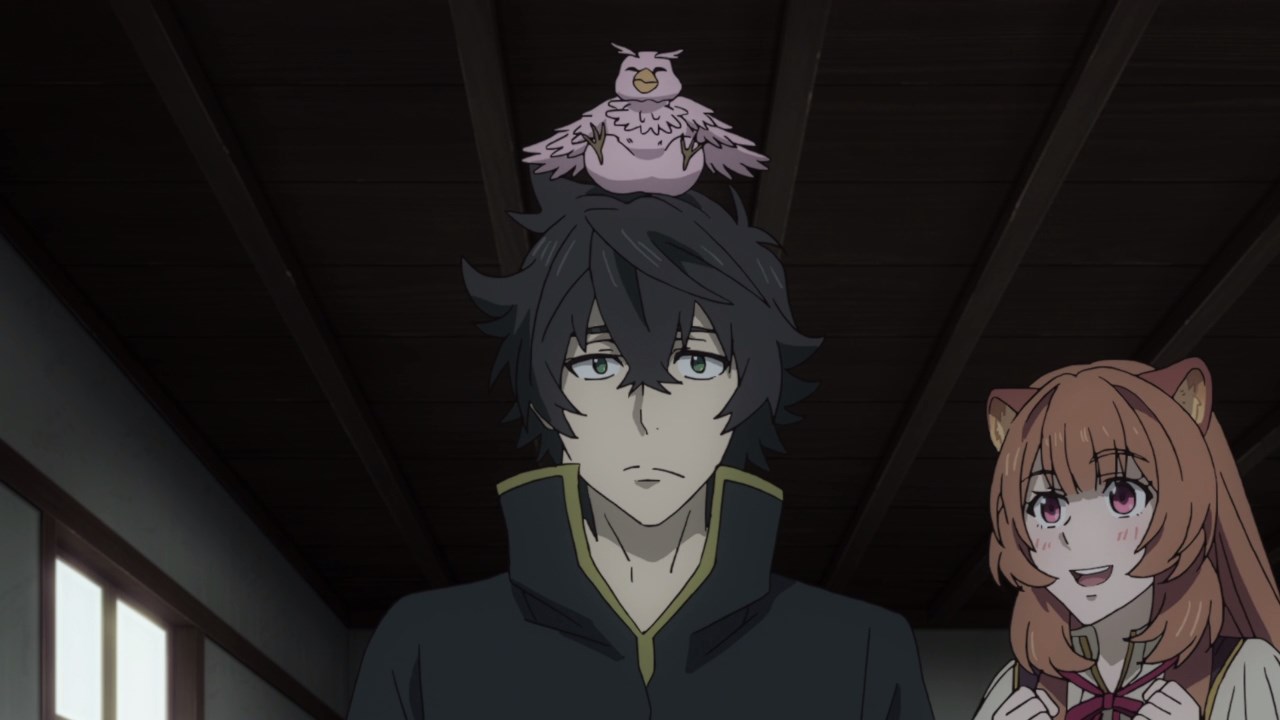 But most of the time, it’ll hatch a filolial which Naofumi got a pink-colored one. Well, it’s sucks that he didn’t get a dragon, but there’s a potential that this filolial might grow up into a better monster if Naofumi raised it well.

By the way, he got some books for free after saving the villagers back in Episode 3. Unfortunately, Naofumi can’t read it because he doesn’t know the language yet. 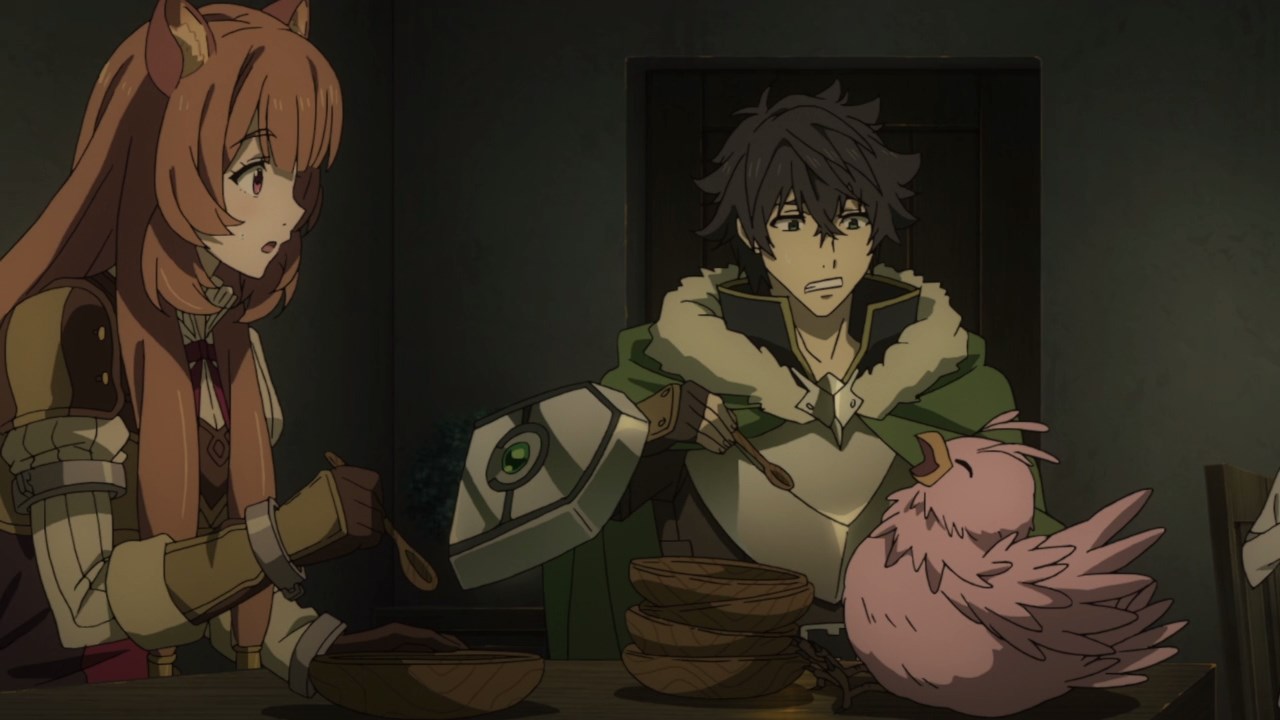 And so, the Shield Hero fed this filolial, now known as Filo, and raise it with tenderloving care. 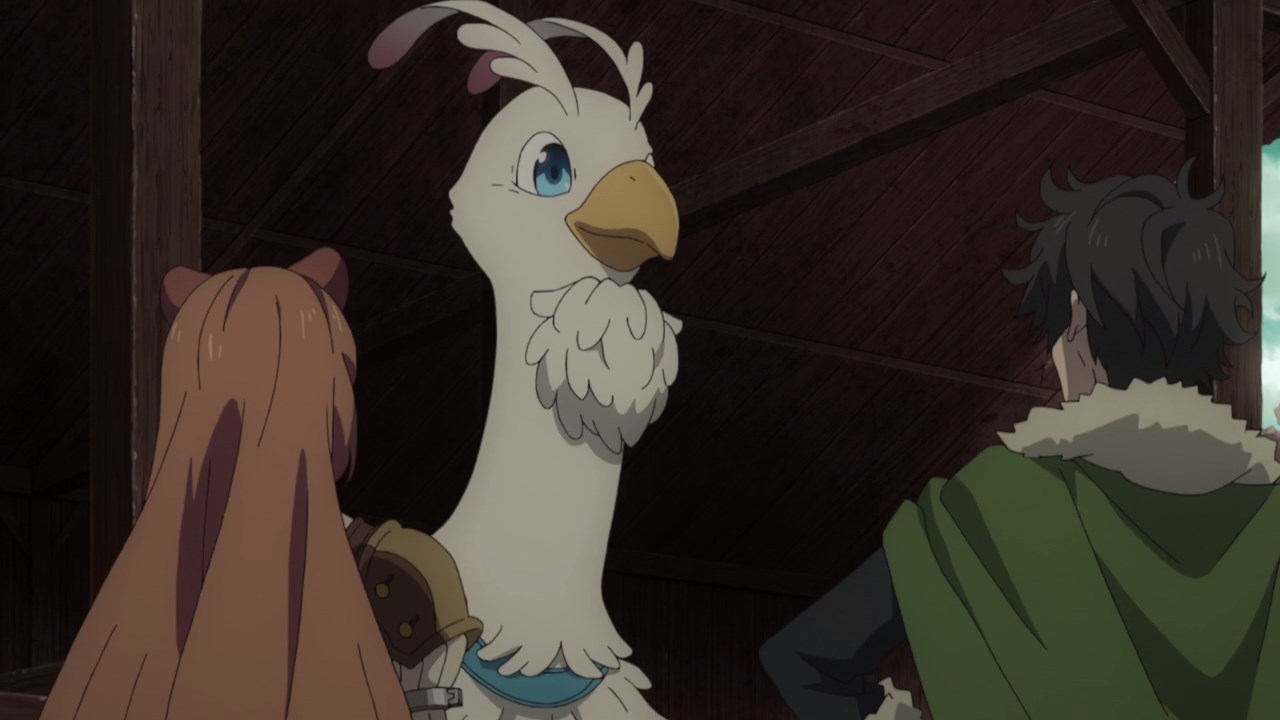 In just two days, Filo became a Chocobo-like creature where Naofumi can ride on it. You may thank his ever-growing skills to boost his allies and ease tedious tasks like raising monsters.

Anyways, I have to say that we’ll end this episode right here, but there’s more to this… 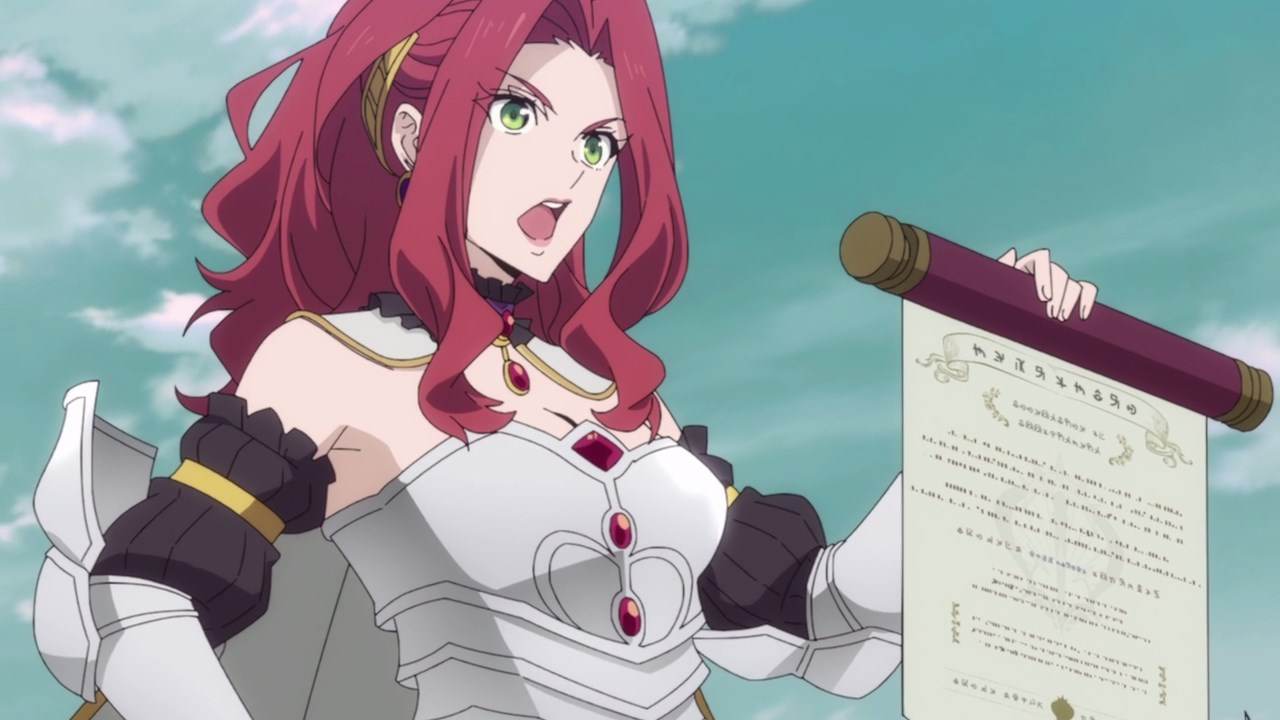 In fact, a certain bitch princess came to Lute Village and declare Motoyasu Kitamura as the governor. Oh, and Princess Malty imposed taxes where villagers and visitors must pay 50 silver coins when getting in and out of Lute Village.

First of all, it’s wrong to impose taxes right away when Lute Village is being rebuild after the previous Wave of Catastrophe. Second, does Motoyasu has the capacity to govern one town? And third, I doubt that the taxes will be used for something good because it’ll go straight to Malty’s vault! 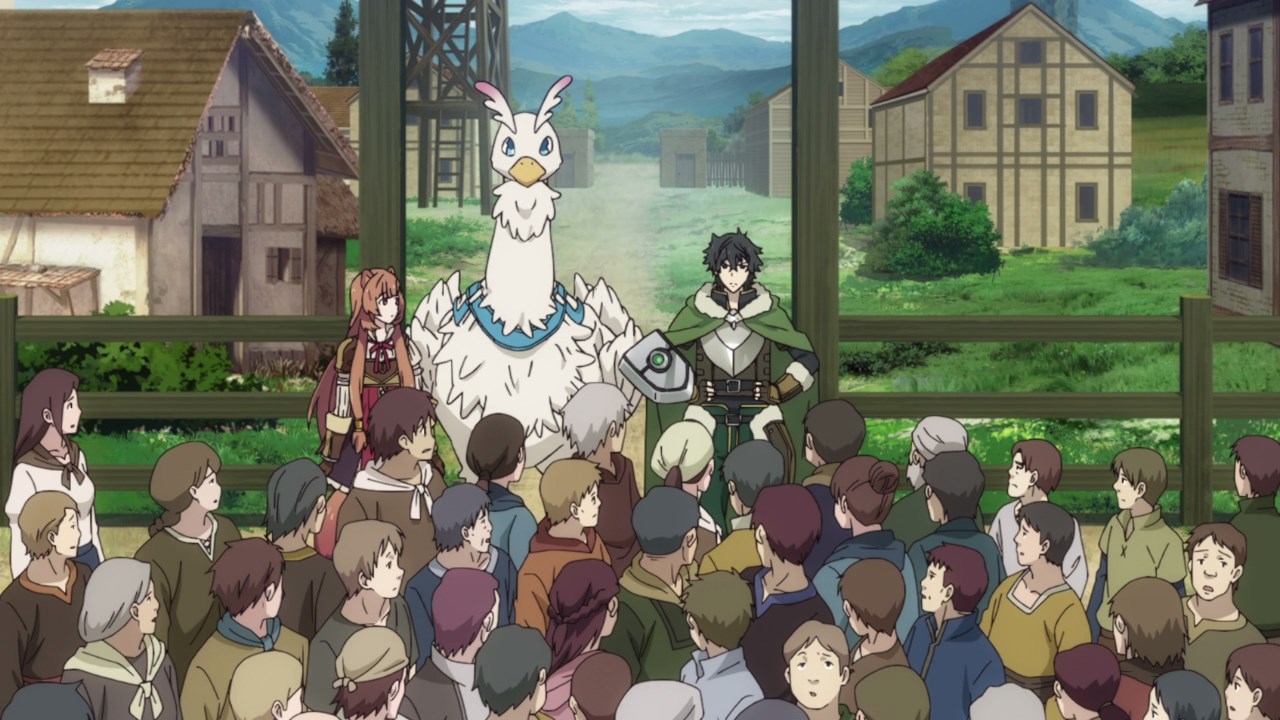 Anyways, the villagers disagreed with Malty’s decision to set up the Spear Hero as the governor. And really, Motoyasu didn’t bother to save the villagers back in Episode 3.

Hell, even Naofumi call it bullshit because Lute Village might be written off the map because of those stupid taxes. And yet, Princess Malty still insists because she wants to rub salt on Naofumi’s wounds! 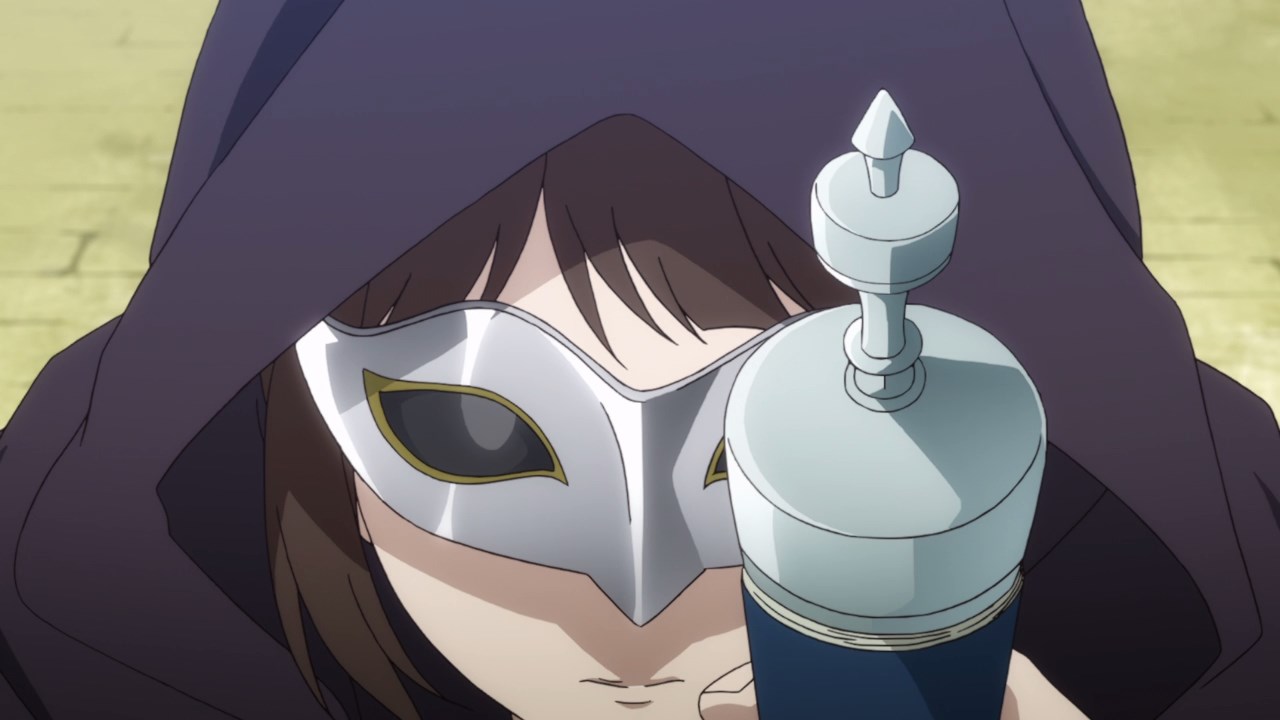 That’s until some mysterious group of messengers arrived at Lute Village to deliver a decree from the Queen, written down in this scroll just to make sure that it’s official. 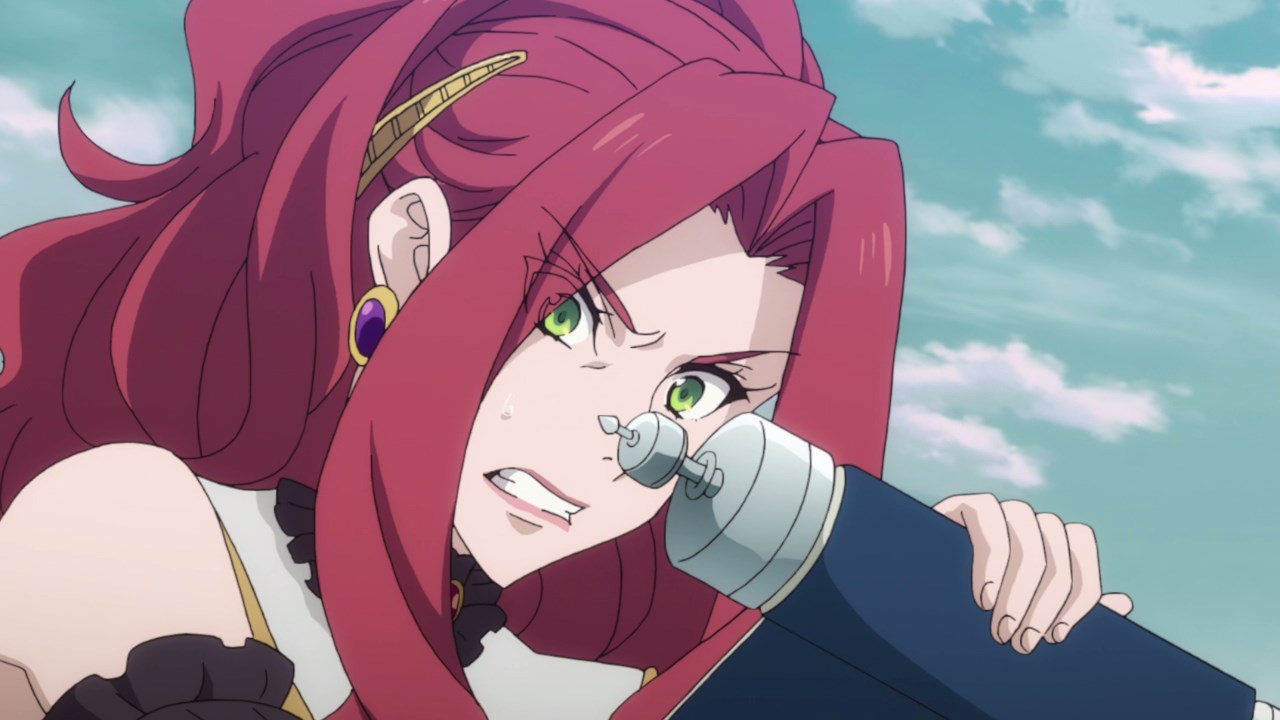 And once Princess Malty read it, she was furious that Malty declared a duel between Motoyasu and Naofumi ’cause she can’t accept her mother’s decree. 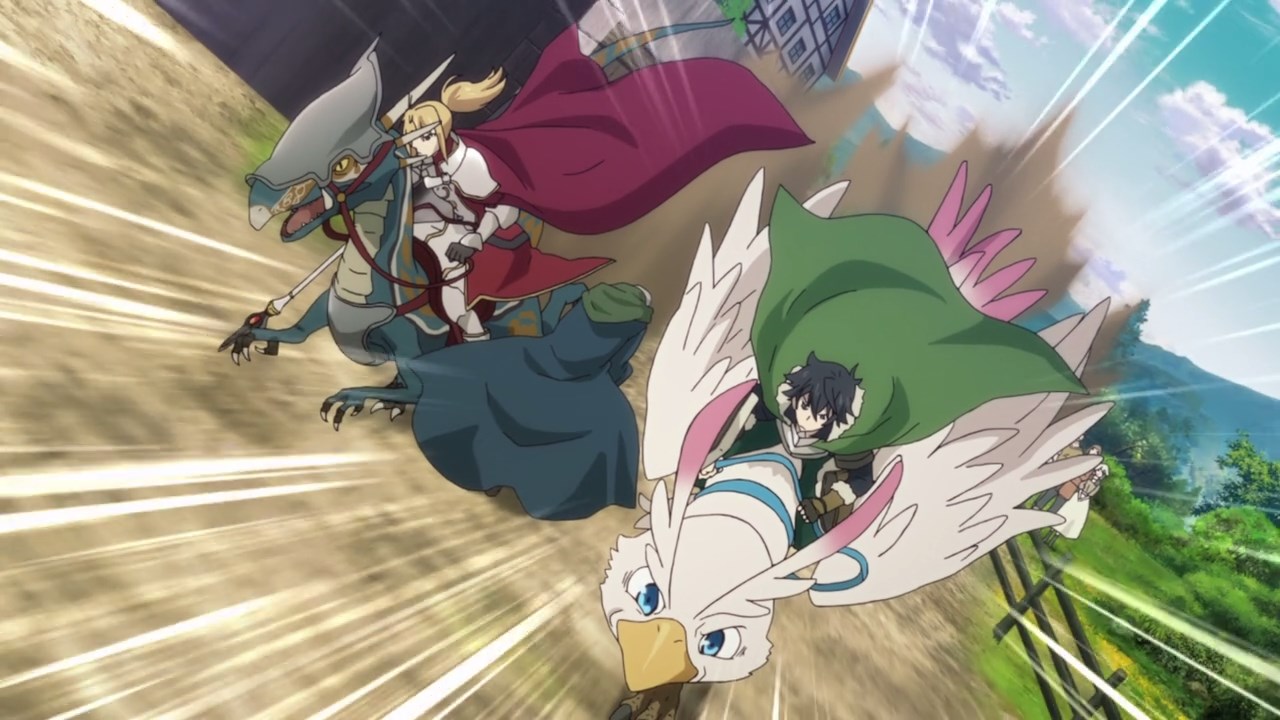 Anyways, time for another battle between two heroes and just like last time, it’ll be rigged because Princess Malty wants to ruin Naofumi’s life until he lose everything! 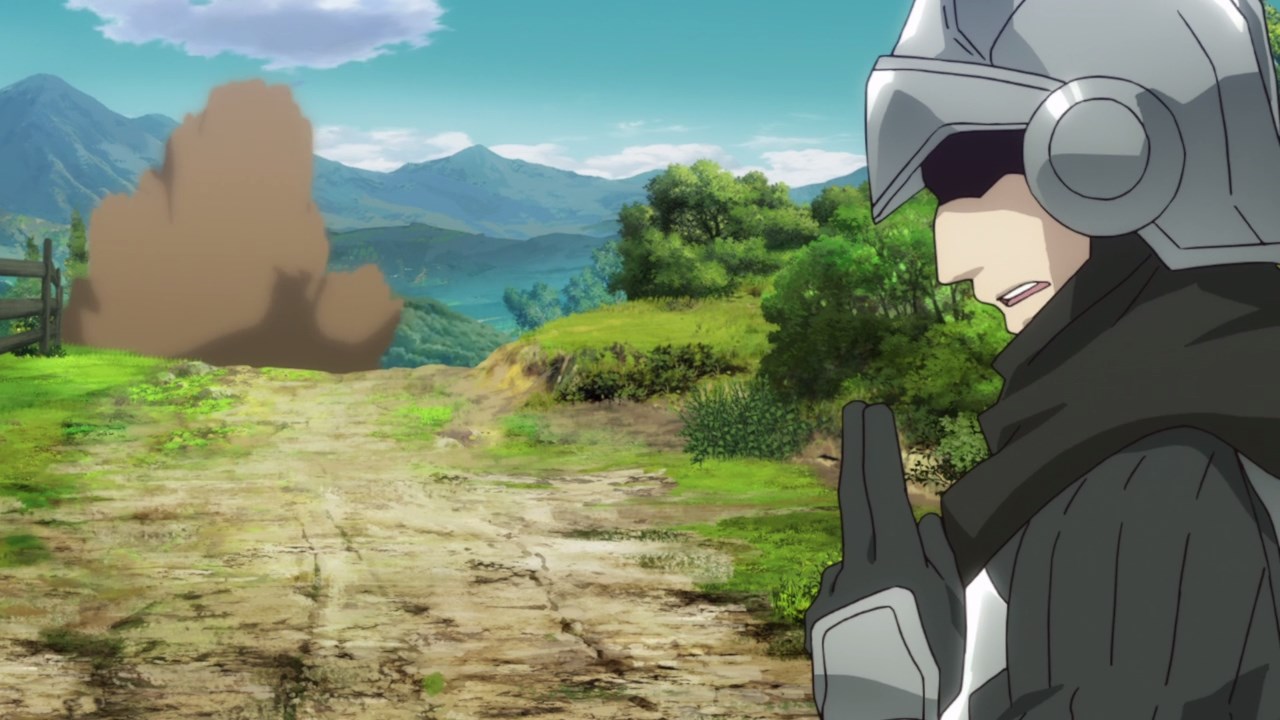 Now then, here’s one of Malty’s soldiers where he casts magic to slow the Shield Hero down. 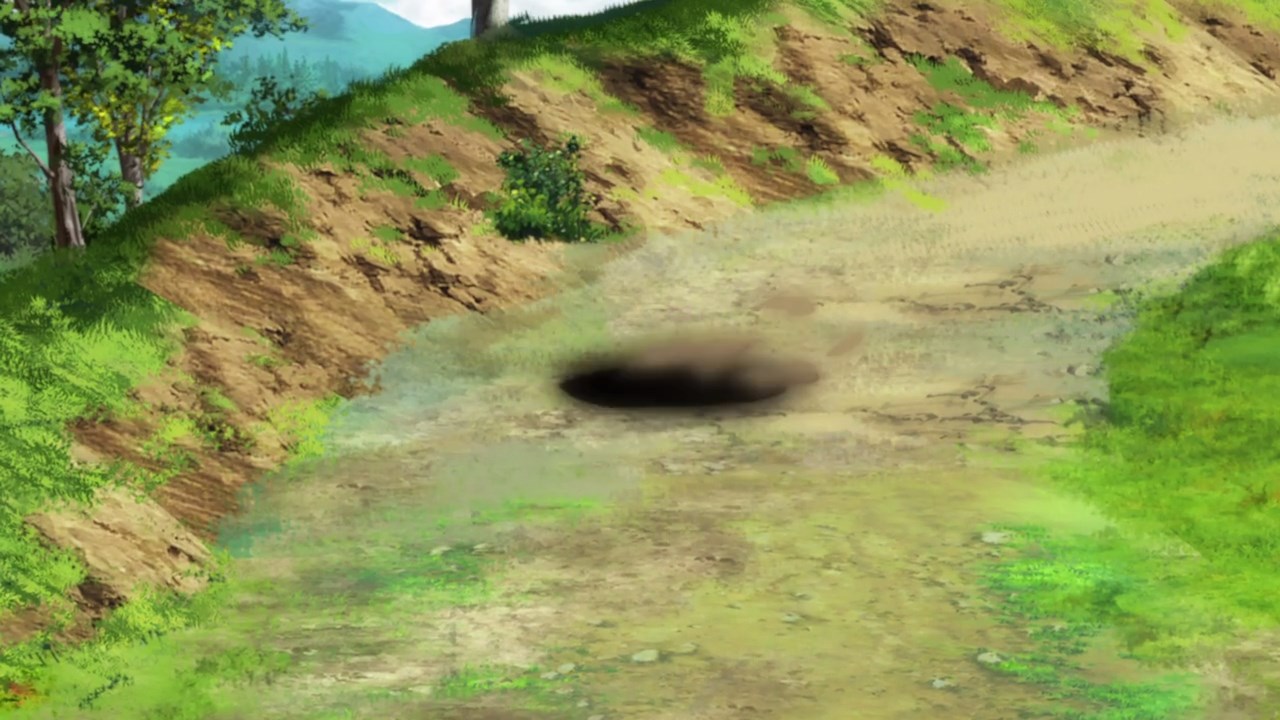 Case in point, someone created a hole so that Naofumi and Filo will trip and fell down the hole.

Really Malty, are you gonna use cheap tactics to make the Shield Hero suffer? Why don’t you just kill him if you really hate Naofumi! 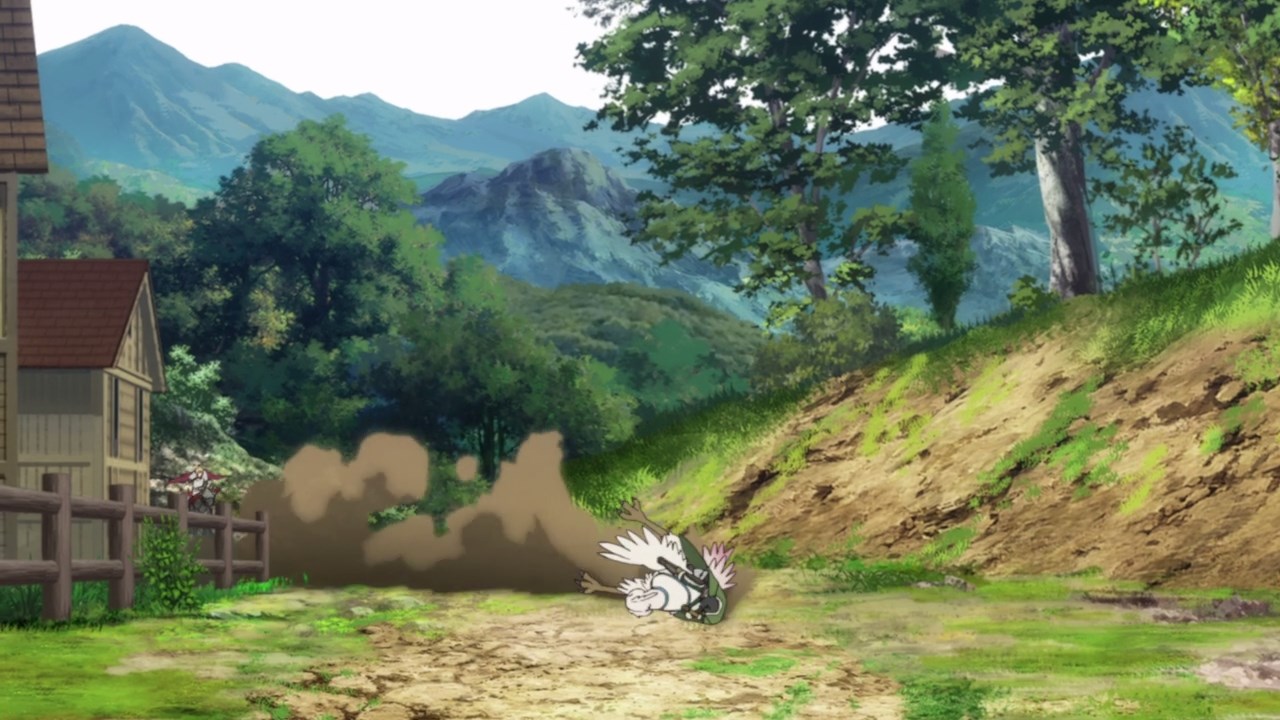 Still, Naofumi and Filo only got tripped thanks to the hole, but that gave Motoyasu an advantage as the Shield Hero slowed down because of that Earth Hole trap. 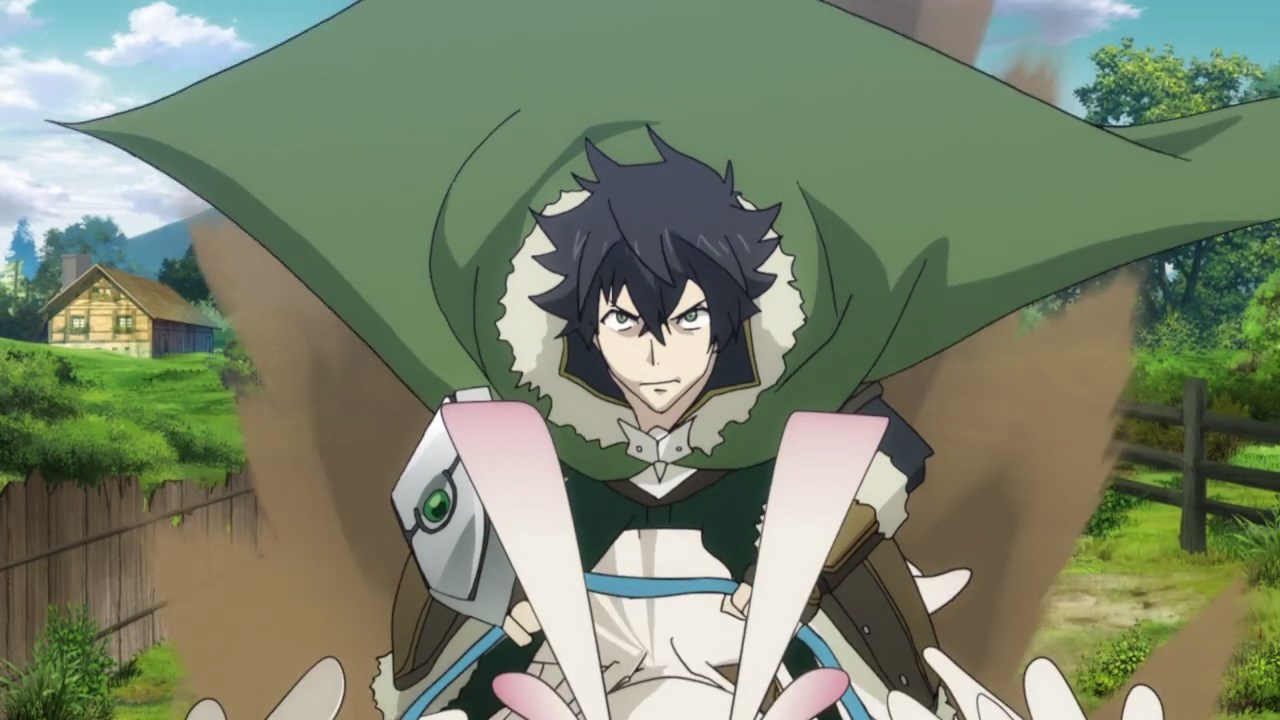 However, Naofumi and Filo regained speed as they’re not deterred by Malty’s traps. In fact, the Shield Hero has a plan on countering those traps. 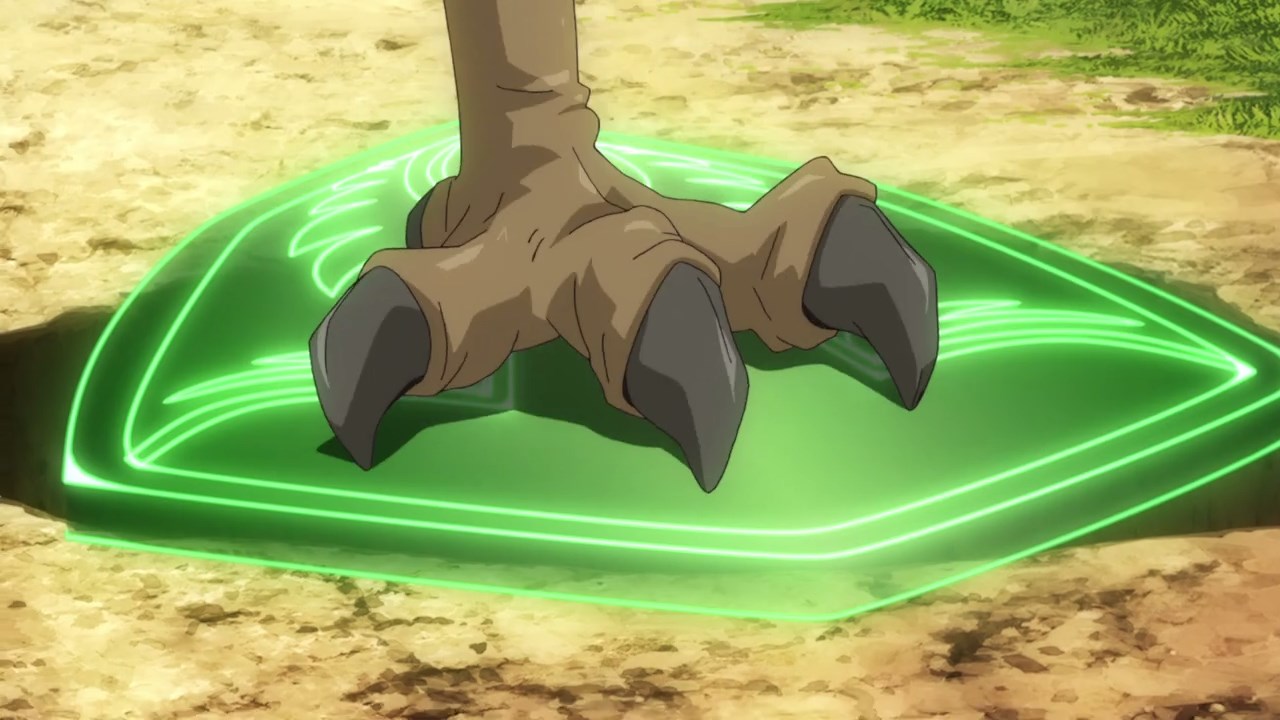 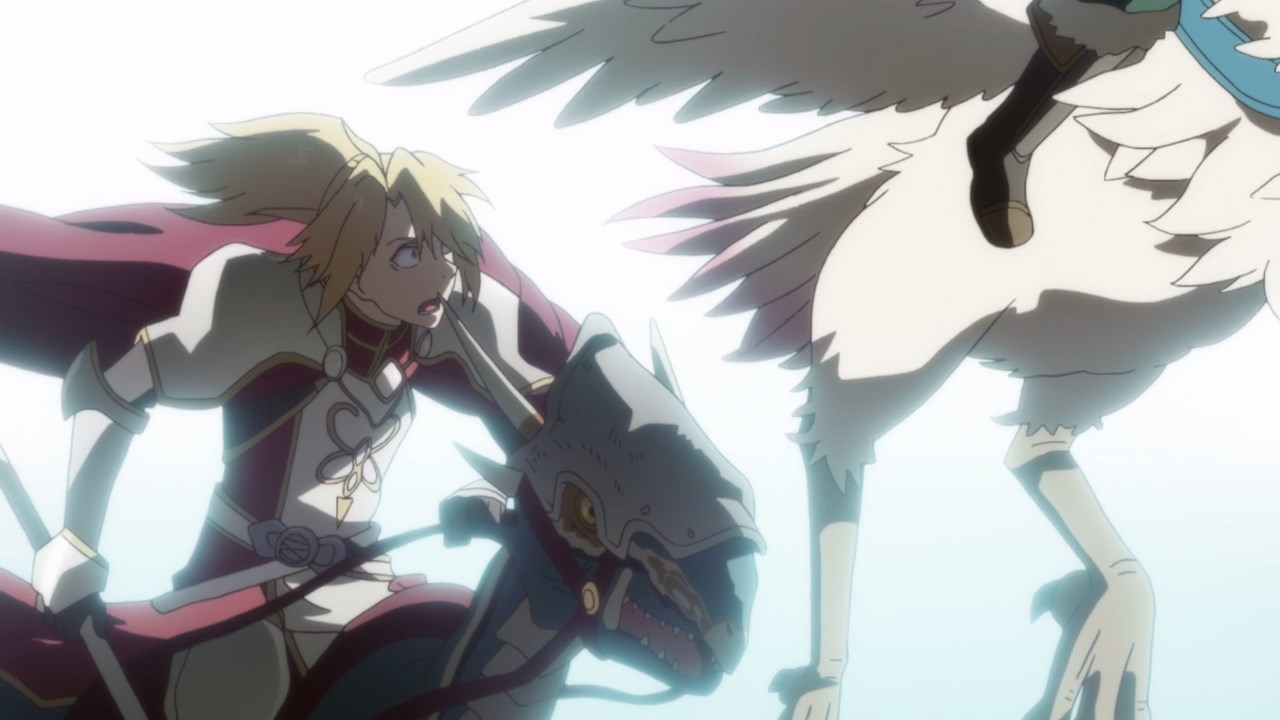 By creating Air Strike Shields on holes, Naofumi and Filo managed to get ahead at the Spear Hero without tripping themselves. Sorry Malty, but your traps are useless! 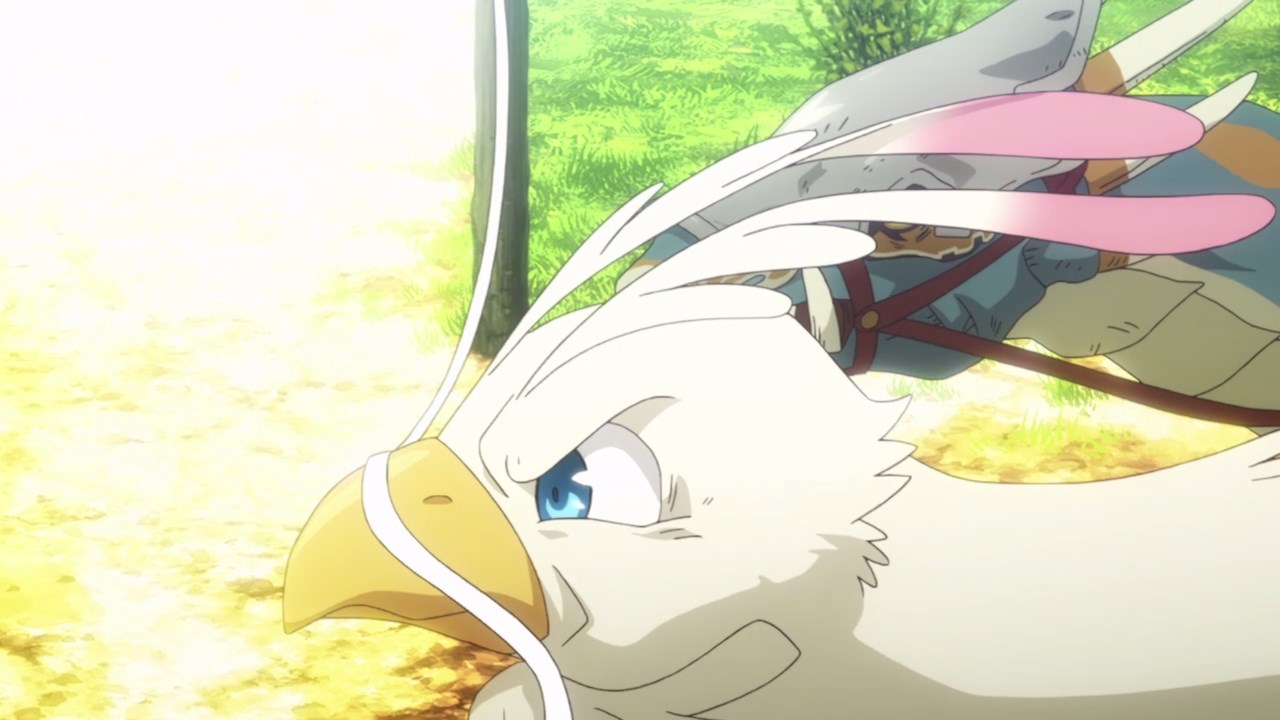 In any case, the Shield Hero crossed the line which means that he won the right to govern Lute Village. Then again, he’s not interested on governing one town. 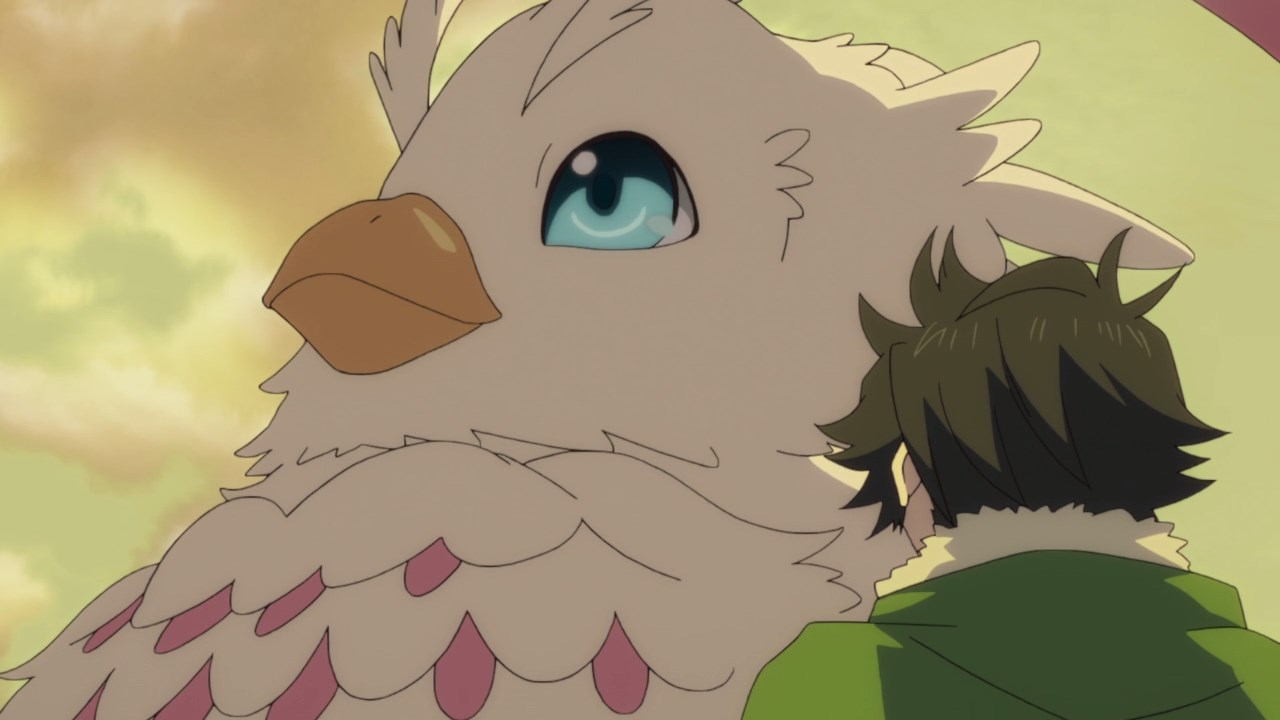 And after claiming victory over Motoyasu, Filo was transformed into a giant bird. So much for its previous form which is quite convenient for Naofumi as he can ride on it. 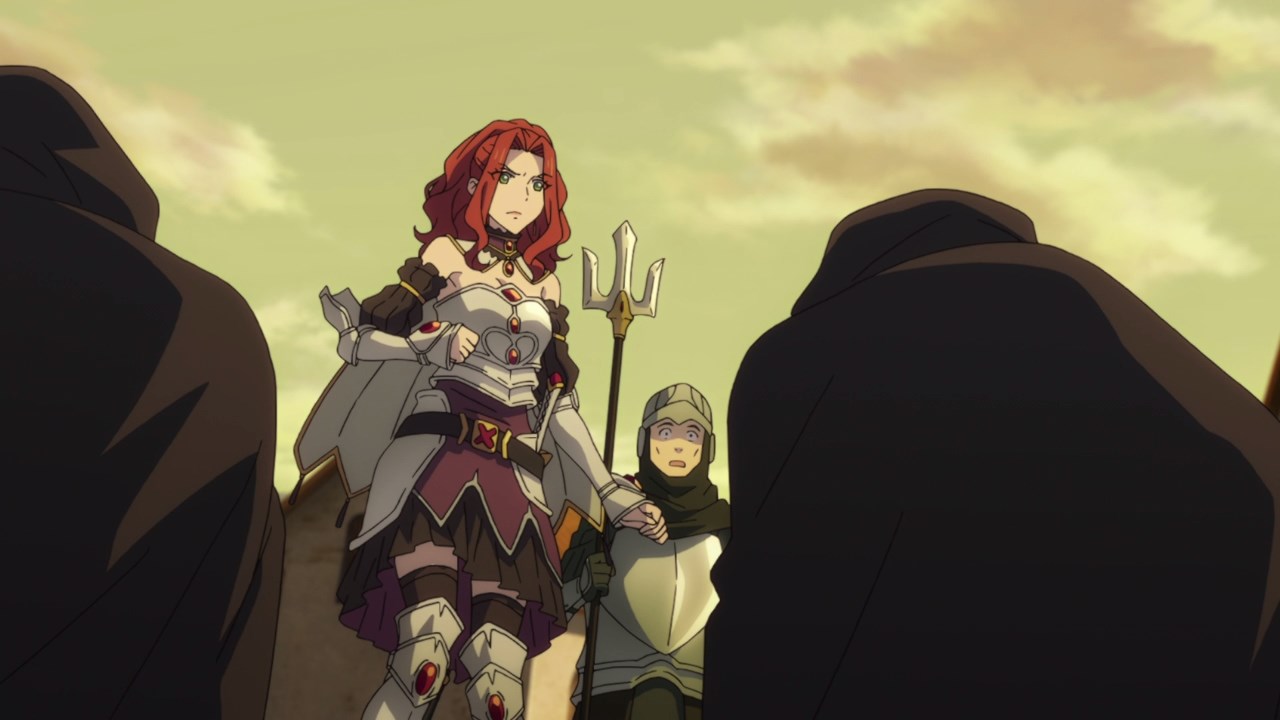 But as for Princess Malty, it appears that the Queen’s messengers are calling out on her underhand tactics to let Motoyasu win. 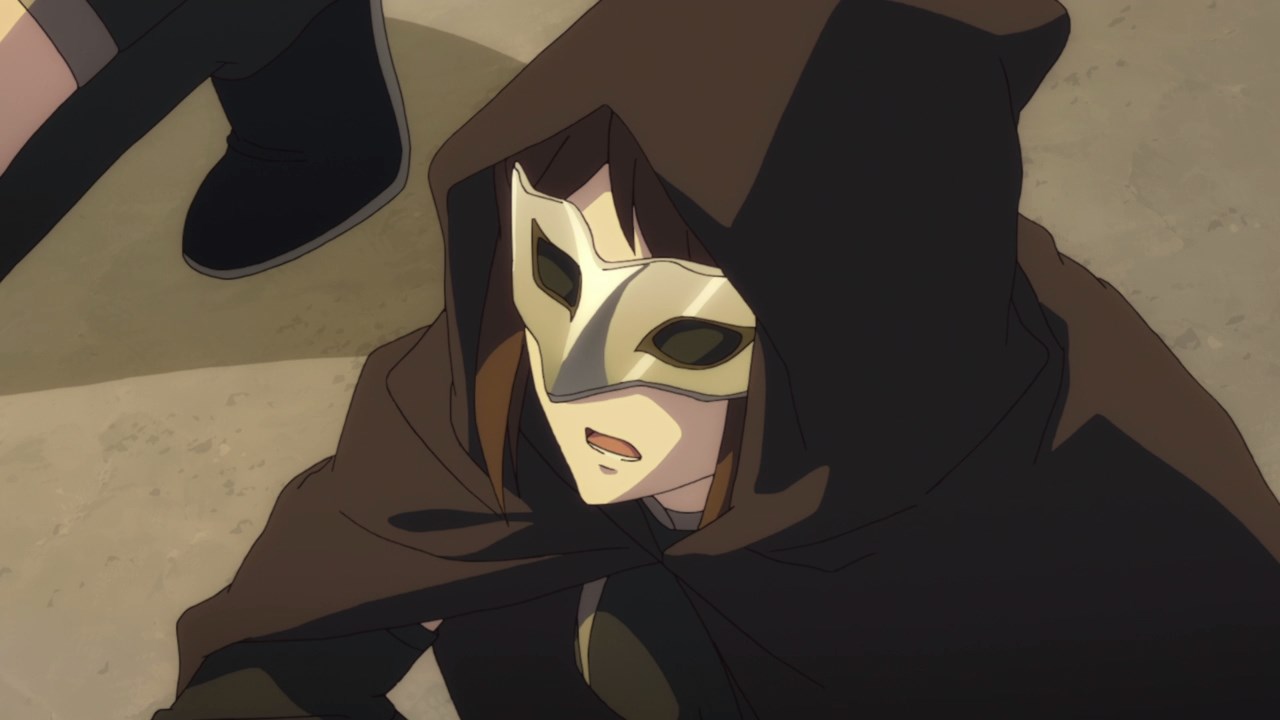 In fact, they detected some magic which Malty’s men cast it during the race. Oh, and they won’t accept the princess’ claims that Naofumi and Raphtalia cheated because their magic is different from the soldiers. I mean, the Shield Hero can heal and buff allies while Raphtalia can use light and dark magic, so there’s no way they can create holes.

But seriously, Princess Malty is a sore loser that makes Dick Dastardly look tame in comparison. Anyways, looks like the Spear Hero and Princess Malty will be blasting off again! 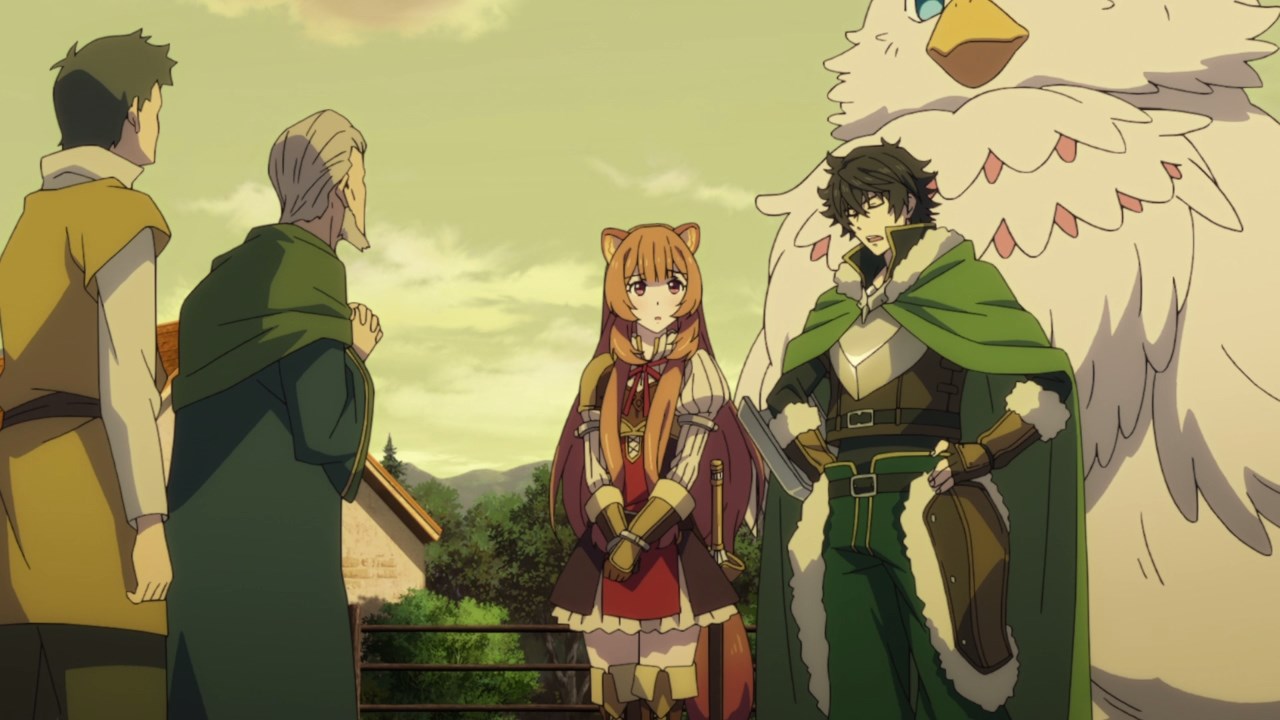 Now then, it’s time for the people of Lute Village to give him a reward, but Naofumi doesn’t want any of it since some people might accuse him of stealing money.

But you know what, how about something that might be useful for the Shield Hero… 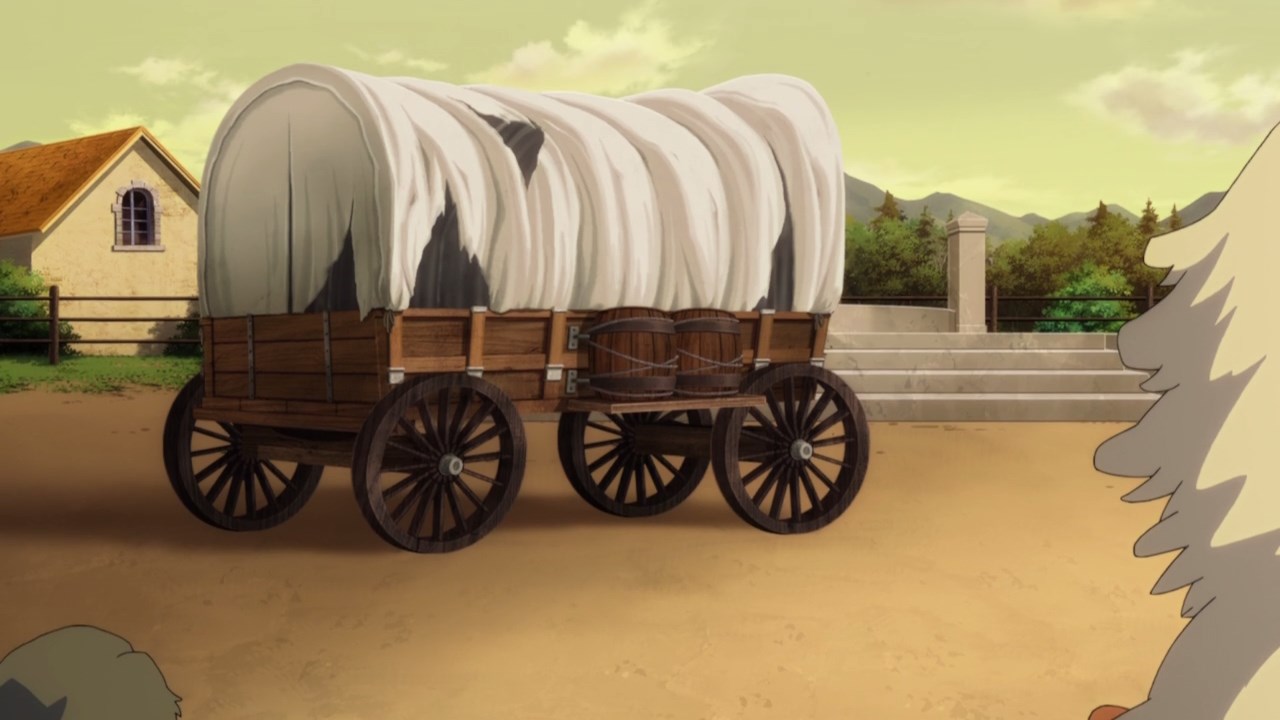 …like this rundown carriage over there. I mean, who wants Naofumi and Raphtalia to travel on foot when they have Filo on their side? 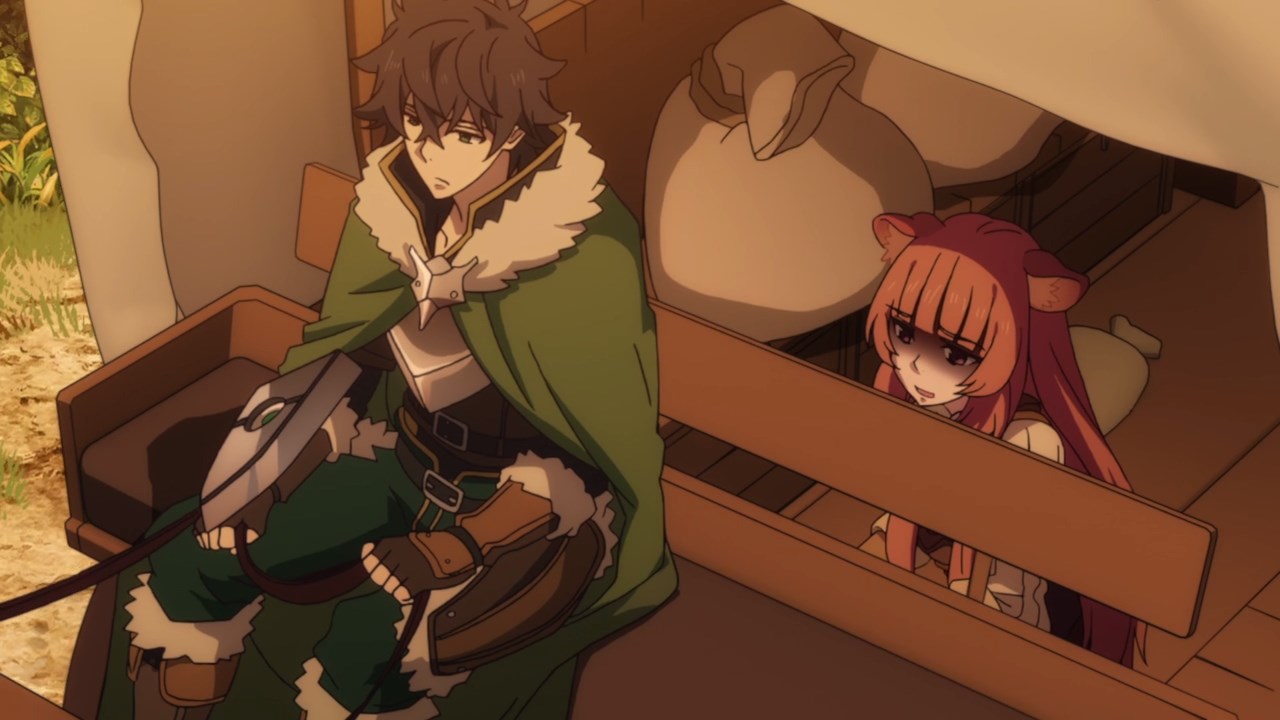 In any case, the villagers gave him the rundown carriage which he’ll use it to travel places, although Raphtalia is getting some motion sickness as she’s not used to riding carriages. 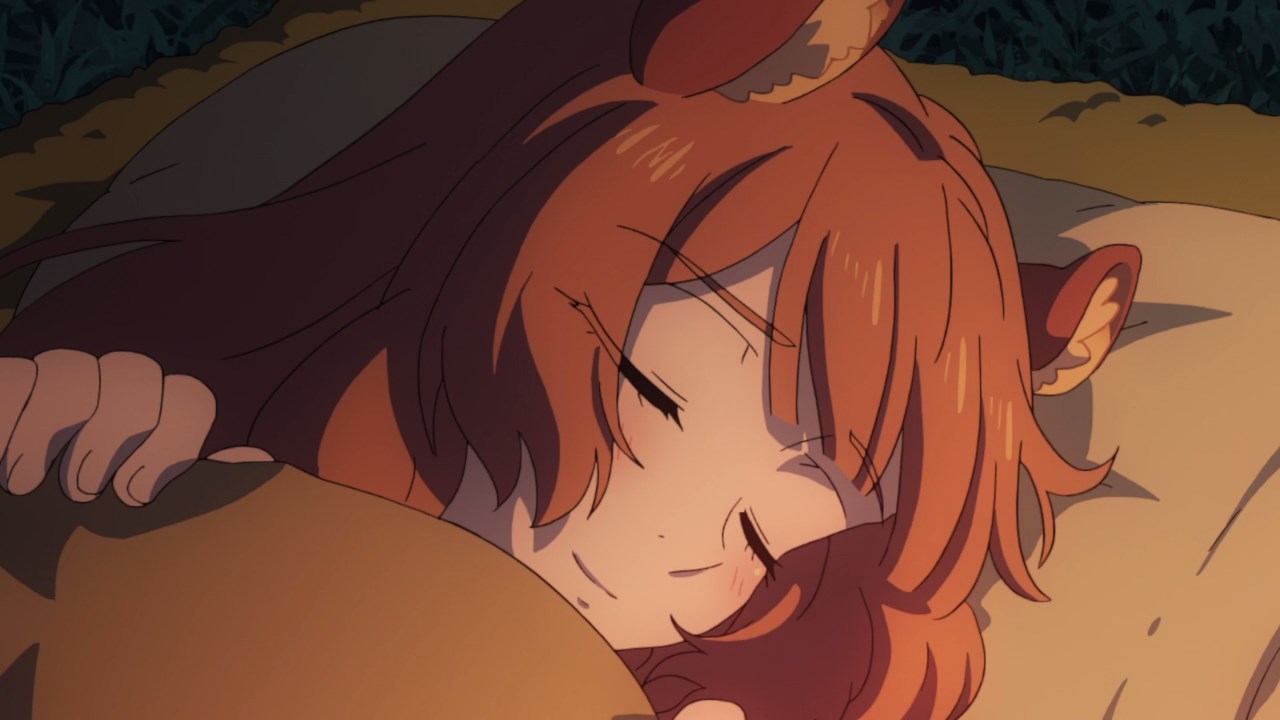 Thus, Naofumi let her sleep for the time being but you’ll know what, Raphtalia will get used to travelling on bumpy roads in the future. 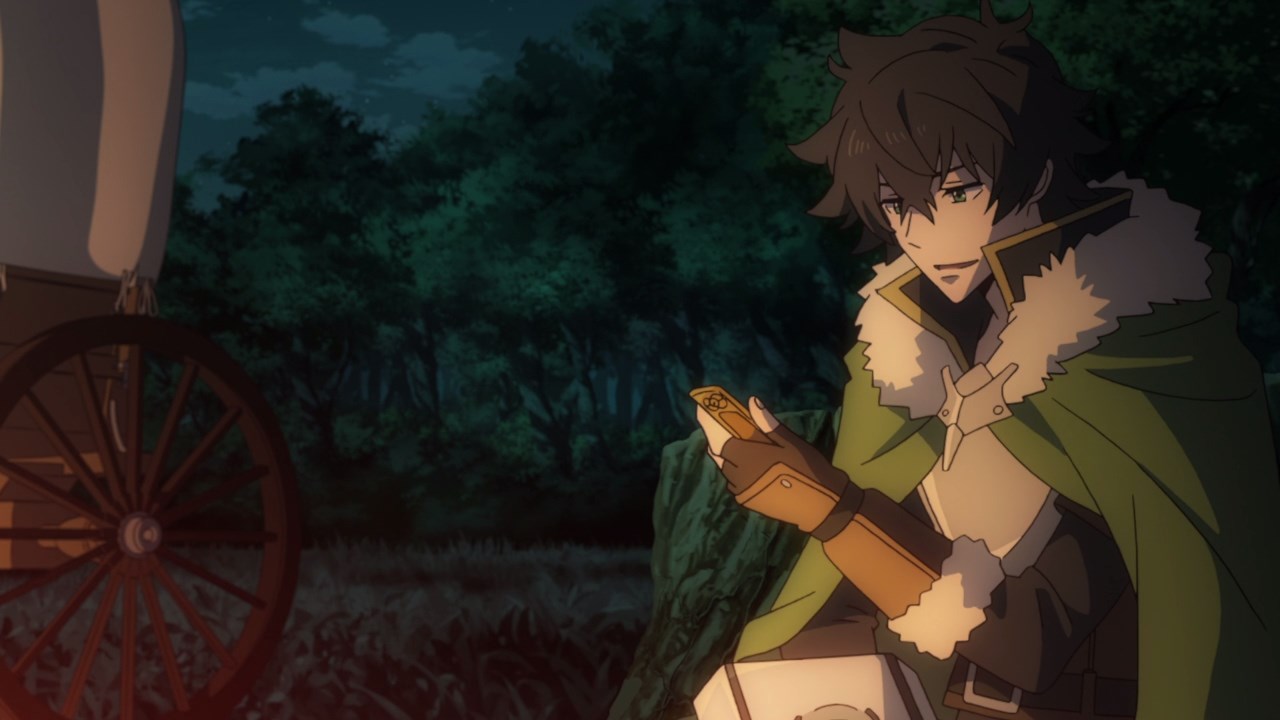 Aside from the carriage, Naofumi got a trader pass from the village chief which will come in handy when going to other towns as they might impose travelling fees when going in and out.

With Naofumi gaining a trader pass, he and Raphtalia can travely freely without paying a silver coin, but they can sell goods without any fuss. Come to think of it, Naofumi might become a good salesman in the future! In any case, time for a good night sleep…

But in the next morning, something strange happen as Naofumi found a naked girl sleeping beside him.

Even Raphtalia couldn’t believe it that the Shield Hero has someone else other than her. On the other hand, where’s Filo since without Naofumi’s pet filolial, he can’t travel as no one will pull the carriage?

But come to think of it, I wonder if this girl happened to be Filo since she has wings? If that’s the case, looks like Naofumi got a jackpot of having a rare breed that can transform into a human.

With that said, I’ll see you next time as Naofumi now has two companions to travel across the world. Still, the entire Melromarc Kingdom hates his guts but you know what, it would be worse if the kingdom went bankrupt, both morally and financially due to how the country is being run by corrupted nobles.