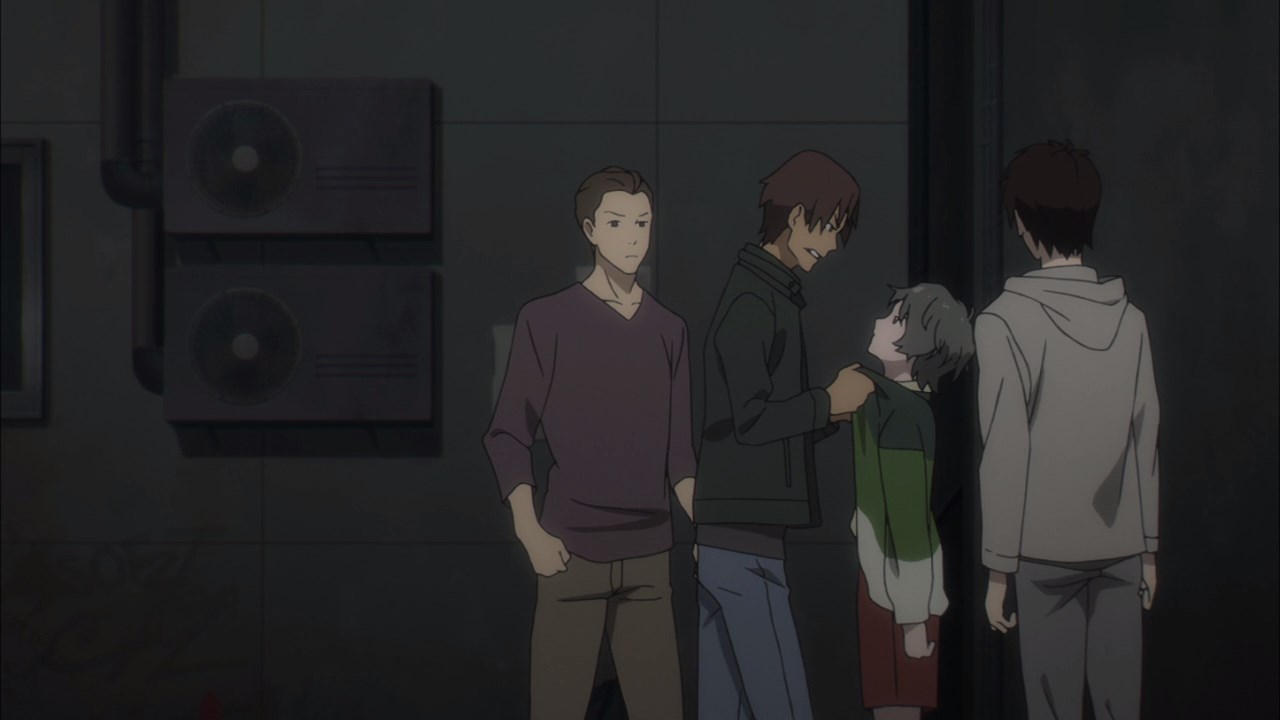 Well, seems that Aya Orihata is in trouble again as she was confronted by thugs who doesn’t like being messed around by some kid. 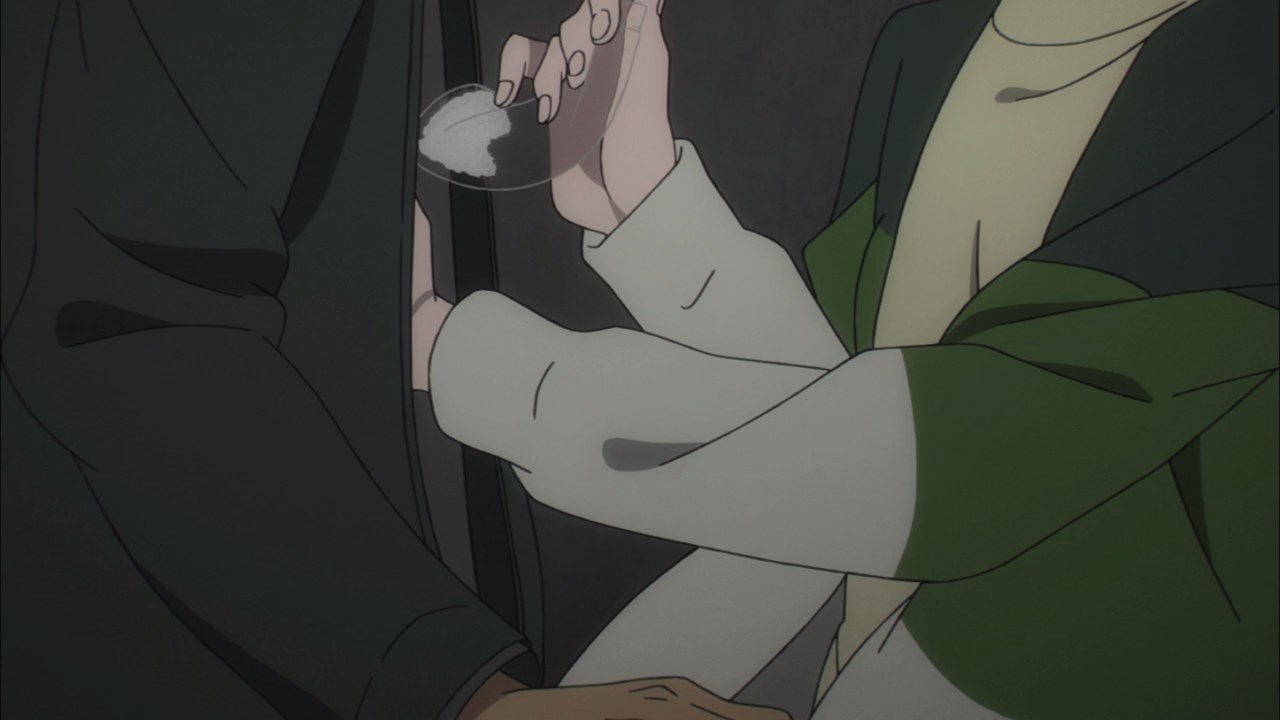 Even worse is that Orihata stole some drugs from those thugs as she runs away from them. Gotta say that Aya might get raped and killed by those goons. 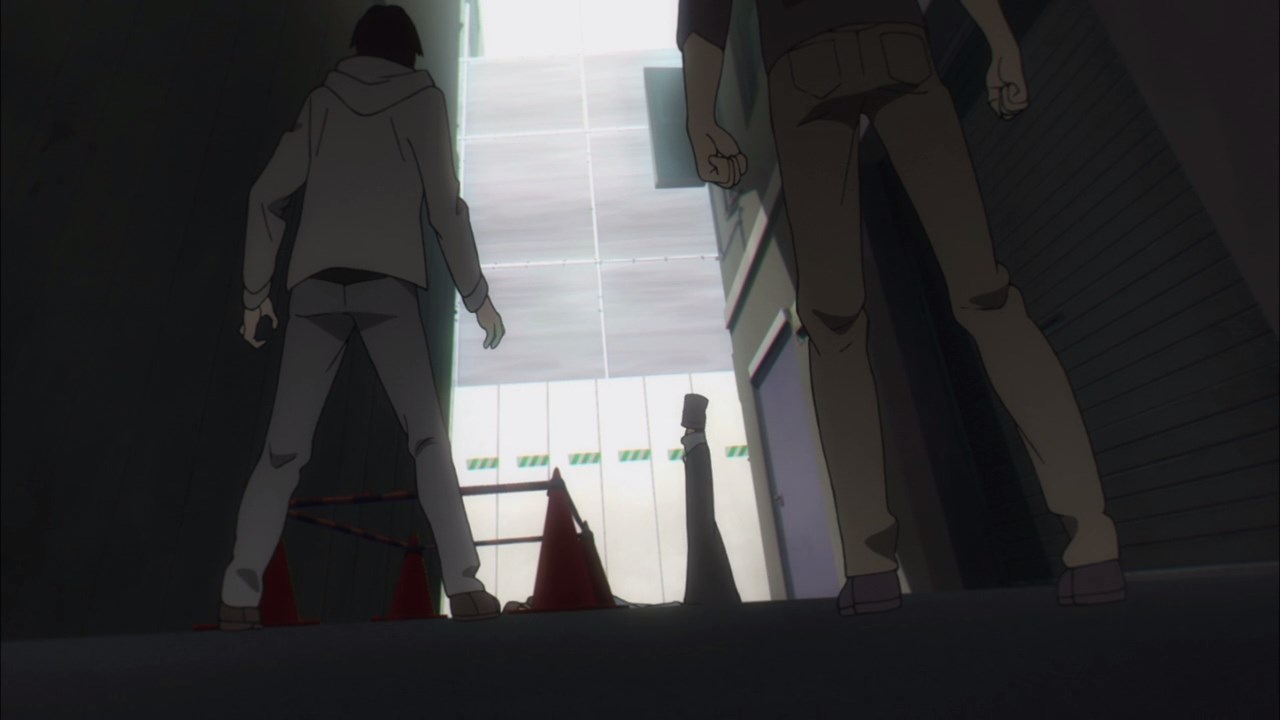 Fortunately, Orihata’s life is saved when a familiar shadowy figure appeared in front of them. This is Boogiepop… 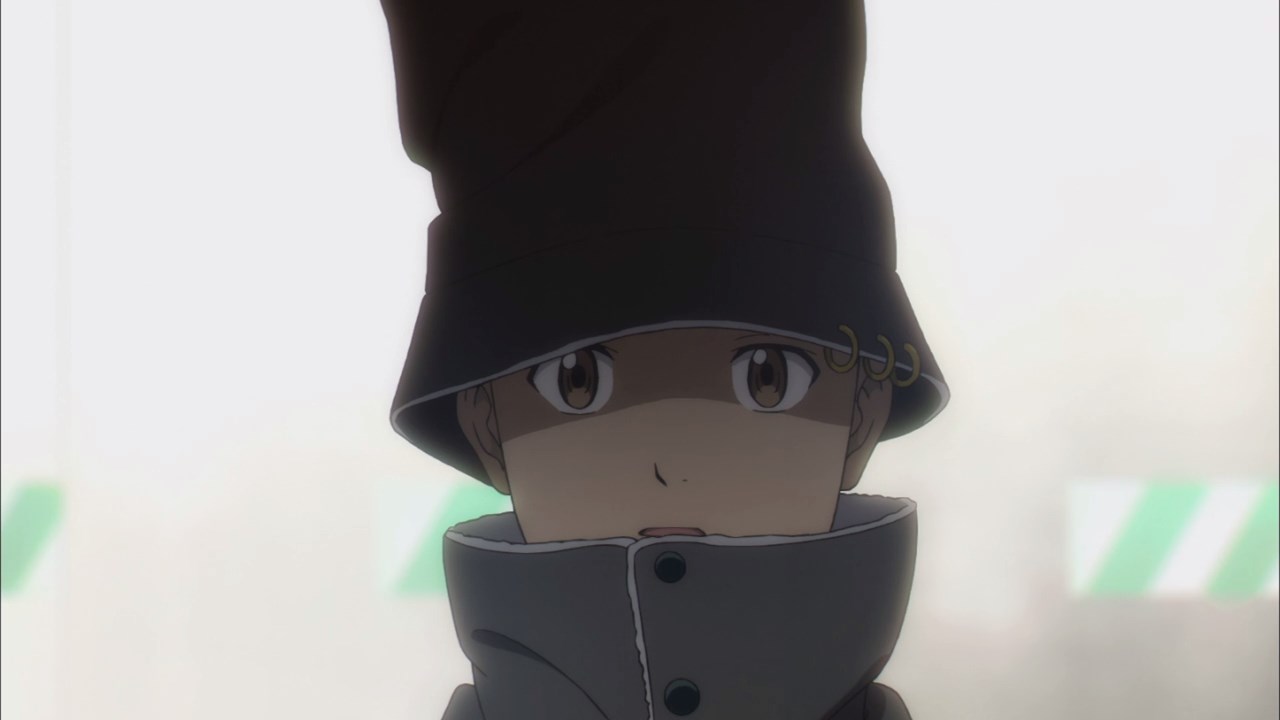 …or rather Masaki Taniguchi as he becomes the grim reaper that preys on drug users. Um Taniguchi, the real Boogiepop doesn’t like imposters like you! 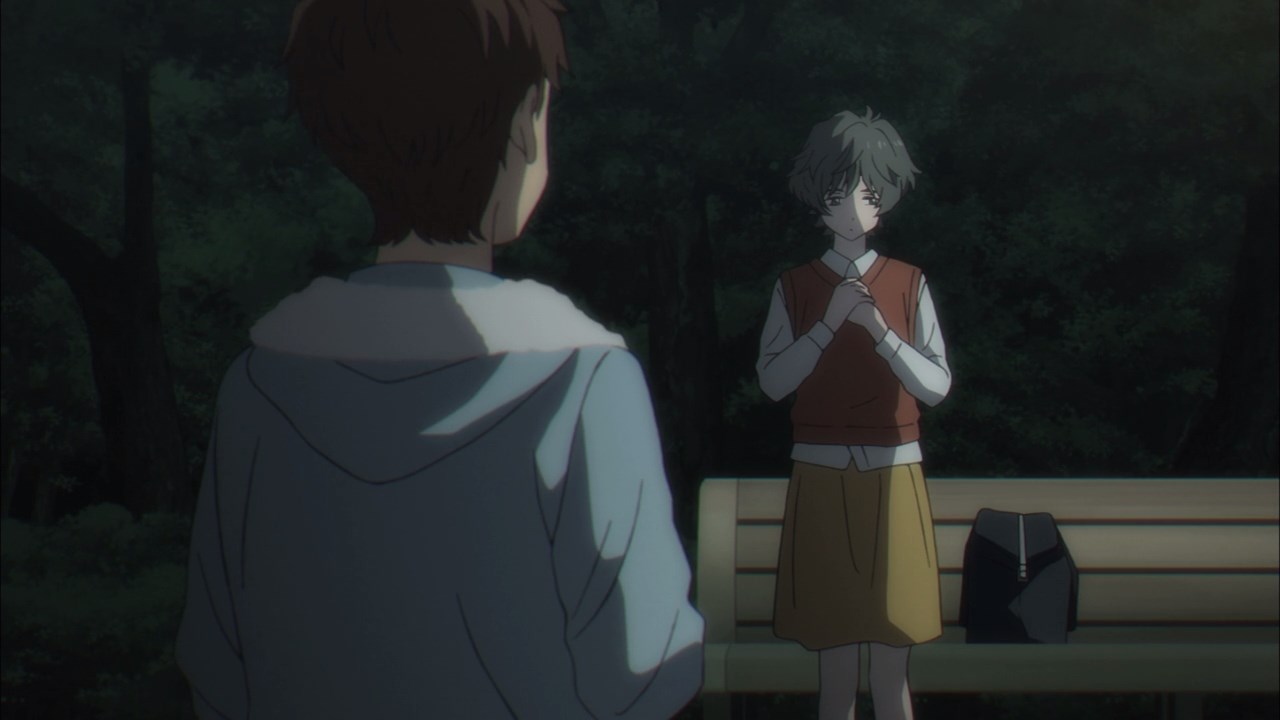 Still, Aya Orihata is worried that having Masaki Taniguchi continue to dress and act like Boogiepop will be troublesome in the long run, as the real grim reaper might get Taniguchi killed later on. 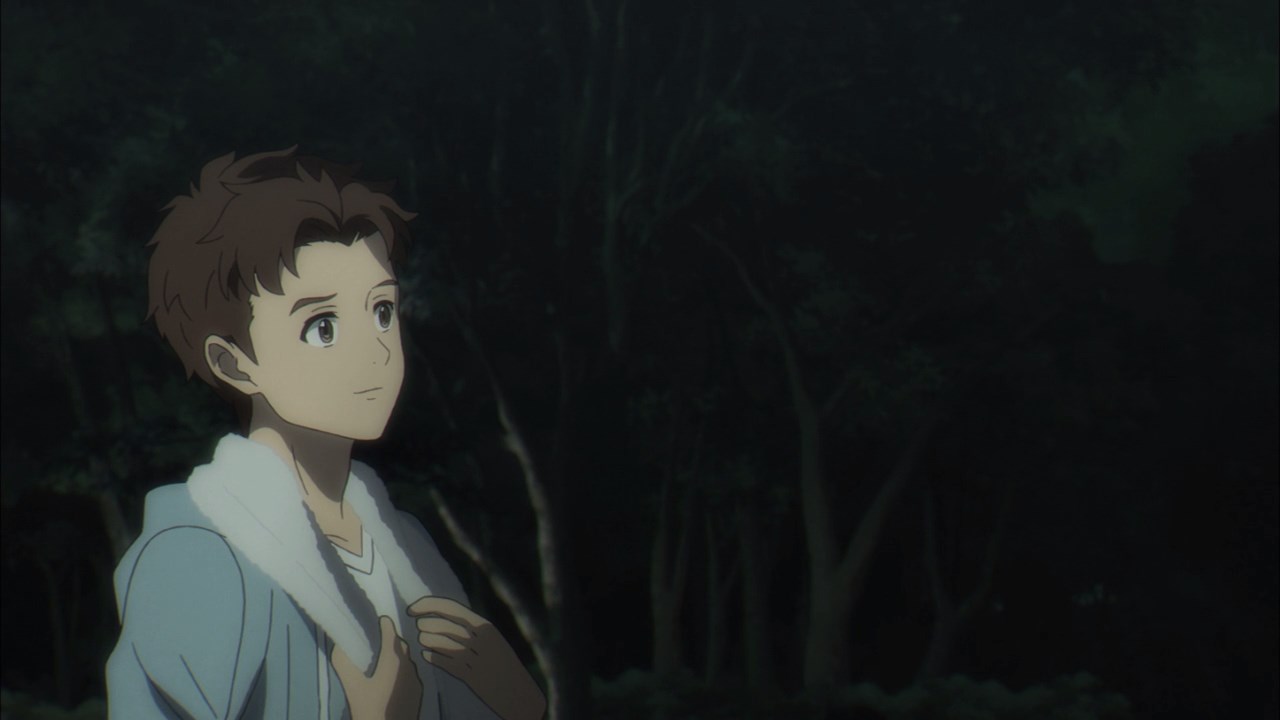 However, Masaki will continue his charade as Boogiepop for Aya’s sake. Then again, it would be better not to continue dressing up as the grim reaper. 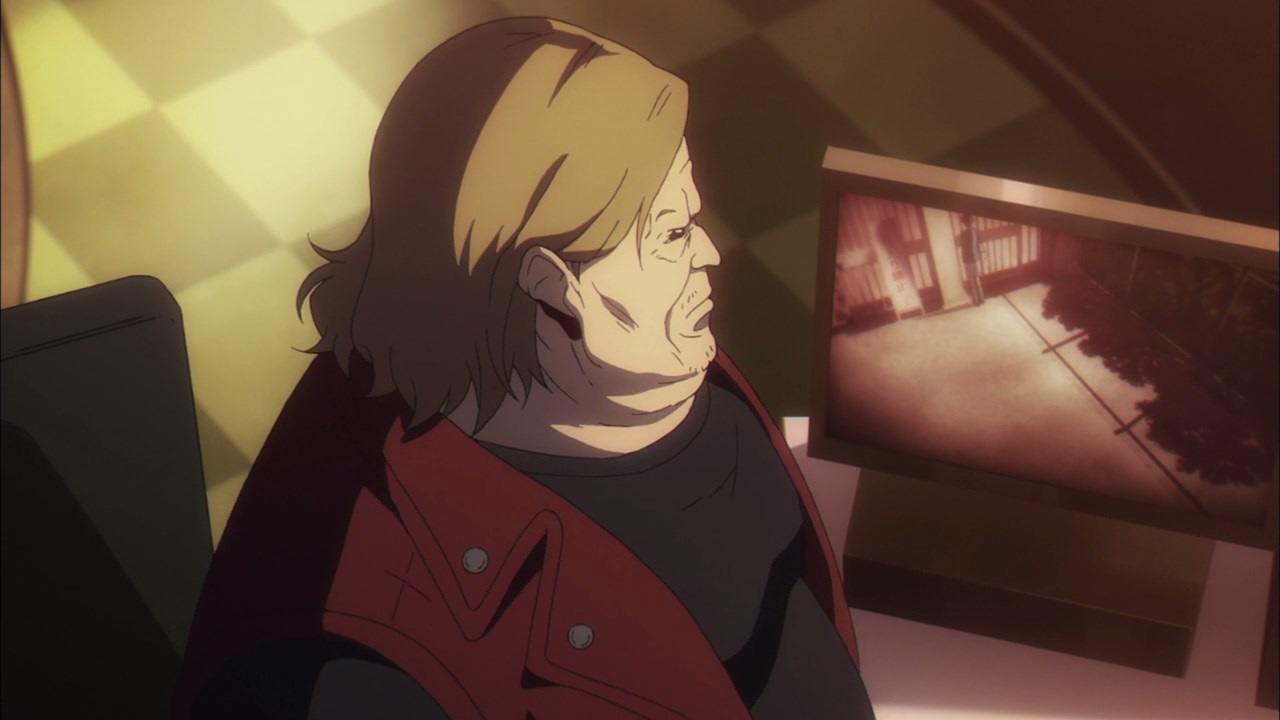 Meanwhile, here’s Spooky E and while he’s focused on taking Boogiepop down since the Towa Organization considers the grim reaper as a threat to their plans, Spooky E is now interested on Boogiepop’s greatest enemy, the Imaginator.

But first, Spooky E will have to deal with an intruder as he saw it via the security cameras. Who could this intruder be? 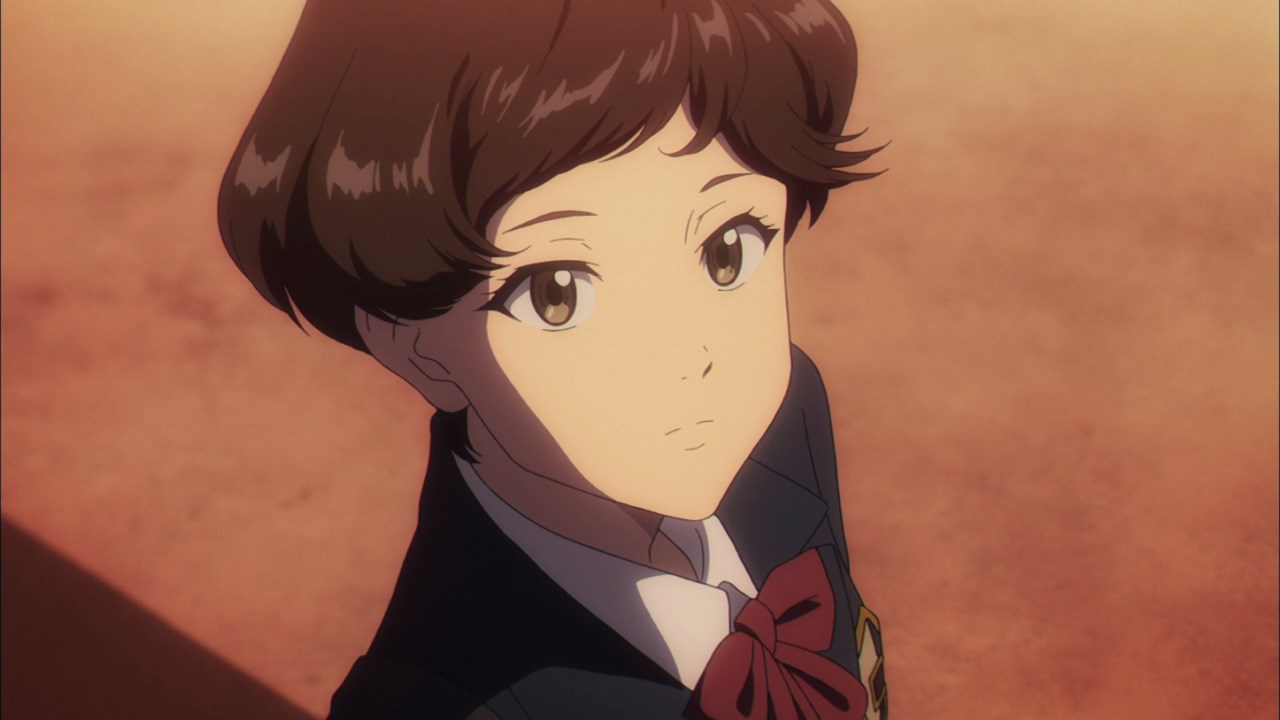 Turns out, it’s none other than Kotoe Kinukawa, Jin Asukai’s cousin whose father is actually the CEO of Kinukawa Enterprise. Basically, Kotoe gets a free pass to visit places owned by her family.

Also, it turns out that Kotoe Kinukawa has a crush on Jin Asukai when he visited her house many years ago. Of course, she’s worried about Jin’s strange behavior lately. Then again, the reason for his strange behavior is that the Imaginator influenced him. 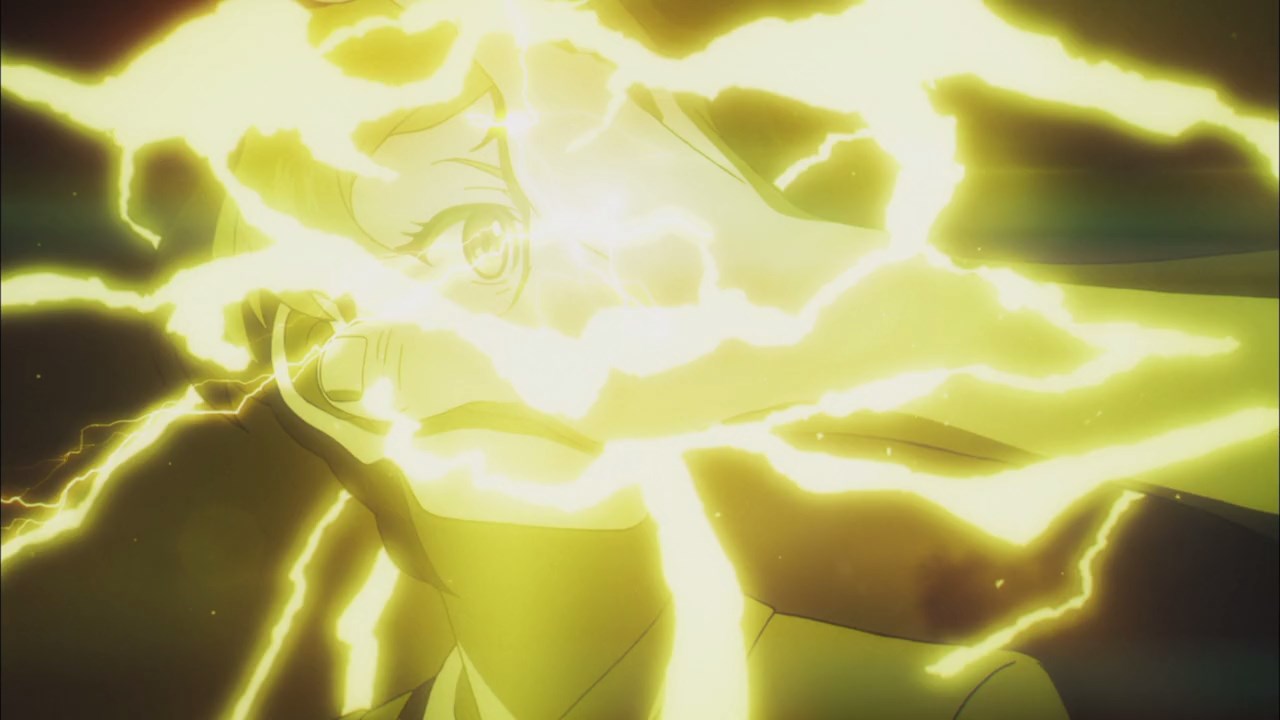 For now, it’s time for Kotoe Kinukawa to worry about herself. However, it’s too late for that as Kotoe got a taste of Spooky E’s electric shock. I wonder what’s he planning to do with Kinukawa? 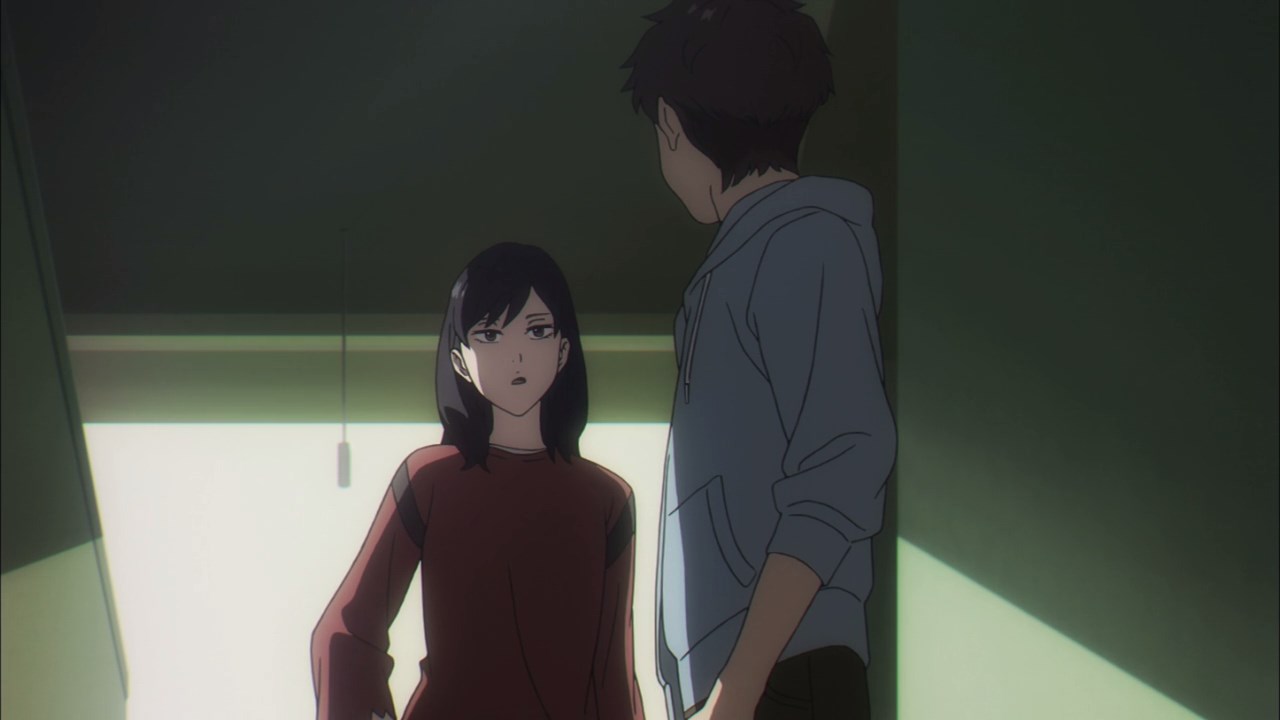 Now we’ll return to Masaki Taniguchi where his weird activies got noticed by Nagi Kirima as she examines Masaki’s bruised hand.

Although he claims that his bruised hand was caused from his karate training, Nagi doesn’t buy Masaki’s claims as she’s getting suspicious towards her relative. 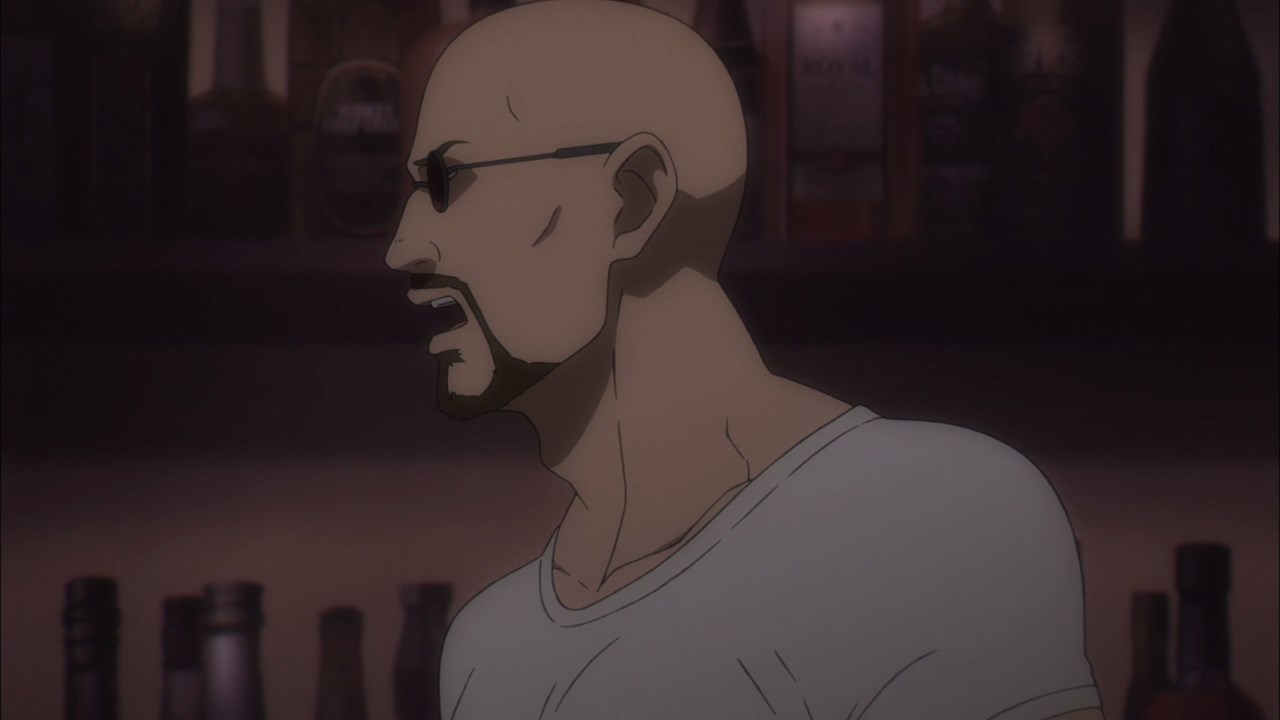 Meanwhile, it appears that this guy at the bar is having a conversation with a mysterious person… 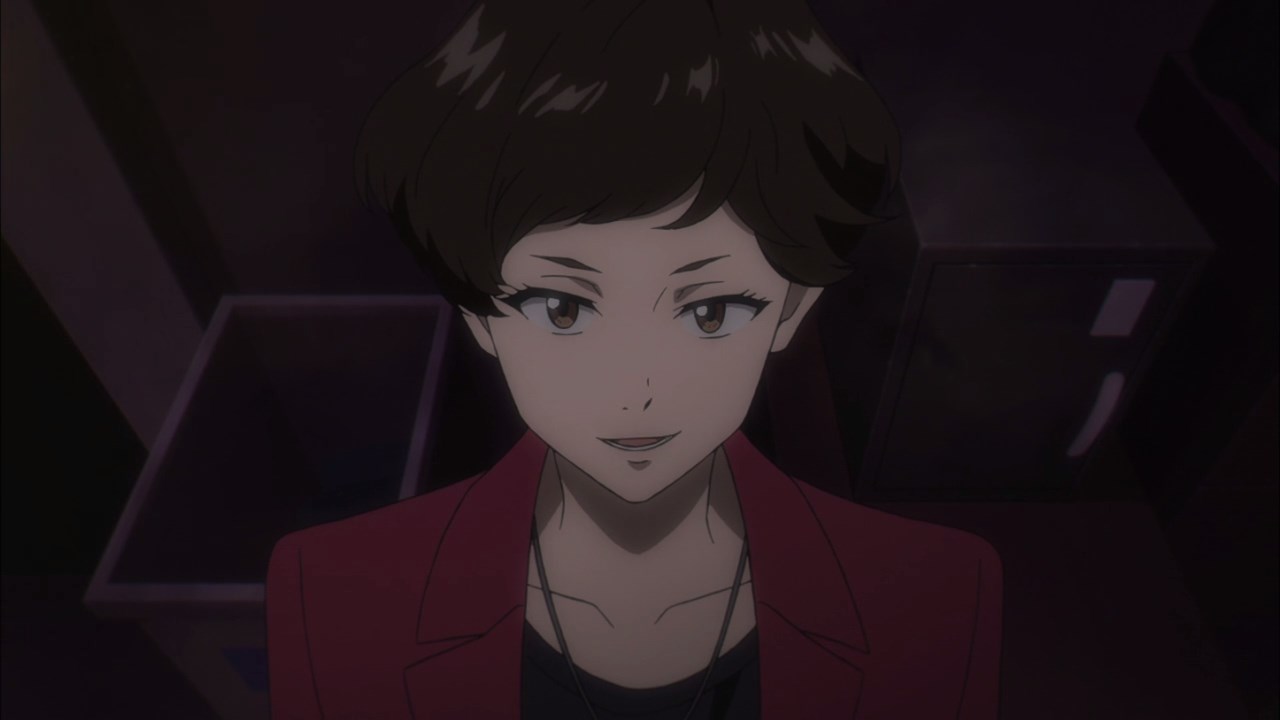 Said person happened to be Kotoe Kinukawa, now being controlled by Spooky E as she wants to know more about the Imaginator. Heck, she go as far as paying the goon with money from her personal bank account, just to find out who this Imaginator is. On the other hand, what’s funny is that it’s not the first time Kotoe is being controlled by someone else as her body was taken over by the Imaginator back in Episode 4.

Still, it’s a missed opportunity for Spooky E to find Imaginator’s whereabout as he could just examine Kotoe’s body. Then again, the Imaginator might not leave a trace at all after possessing someone for a brief period. 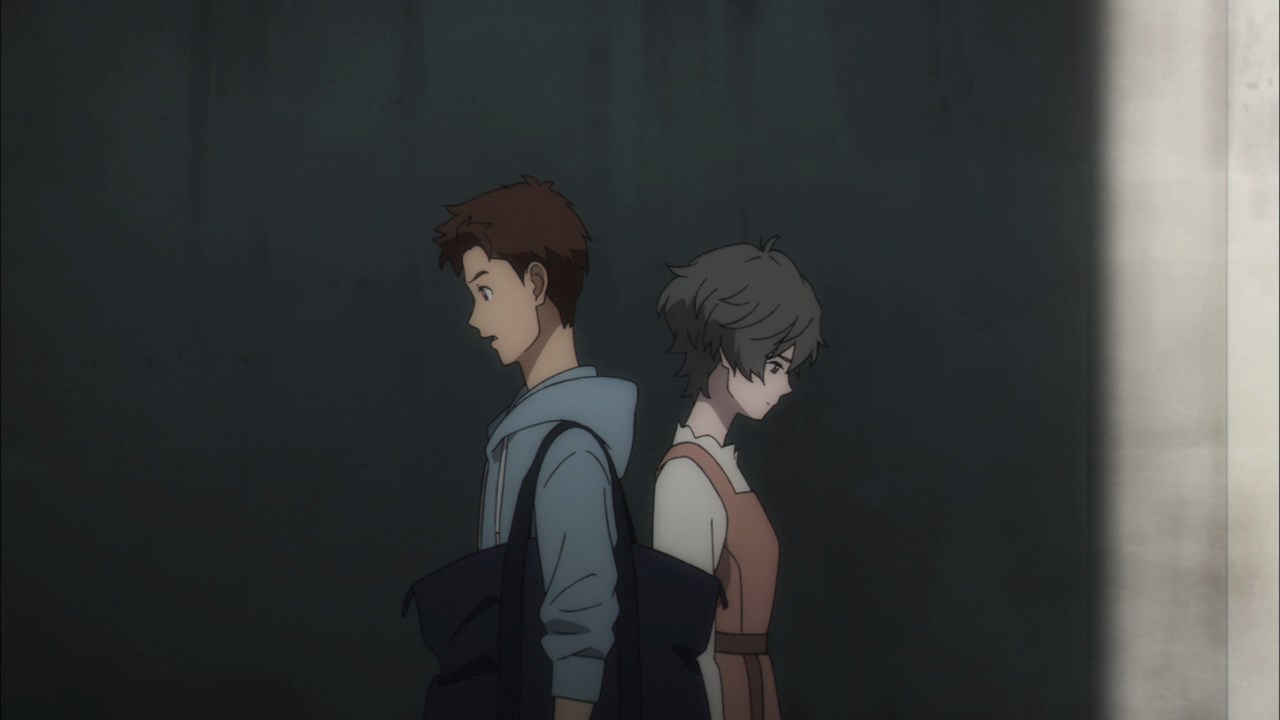 Now then, we’re now at the end of this episode where Masaki Taniguchi continues dressing up as Boogiepop on his own volition, just to keep Aya Orihata safe from harm’s way.

However, Aya told Masaki to stop as she realized that it’s her fault from coming up an idea to have someone dress up as the titular grim reaper. Unfortunately for Orihata, Taniguchi still persisted on becoming Boogiepop for her sake as Masaki leaves. 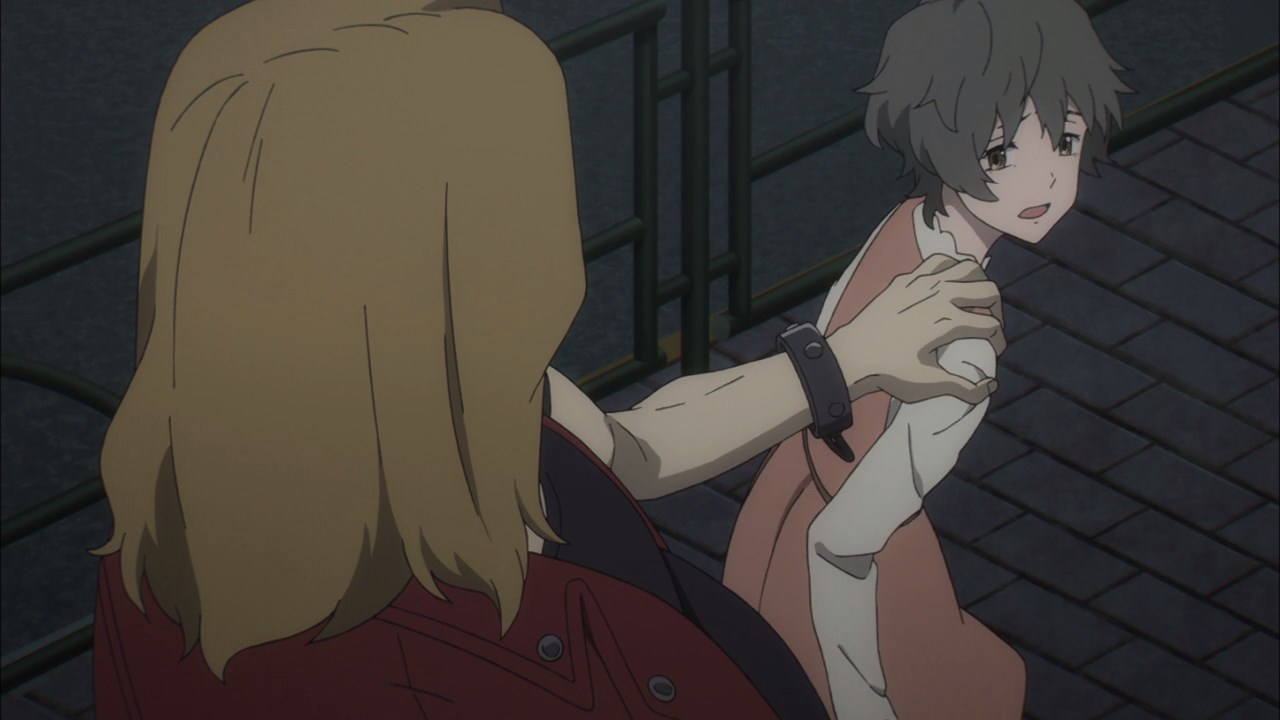 But just as Orihata is about to chase Taniguchi and begged him to stop, a certain Spooky E appeared behind her. 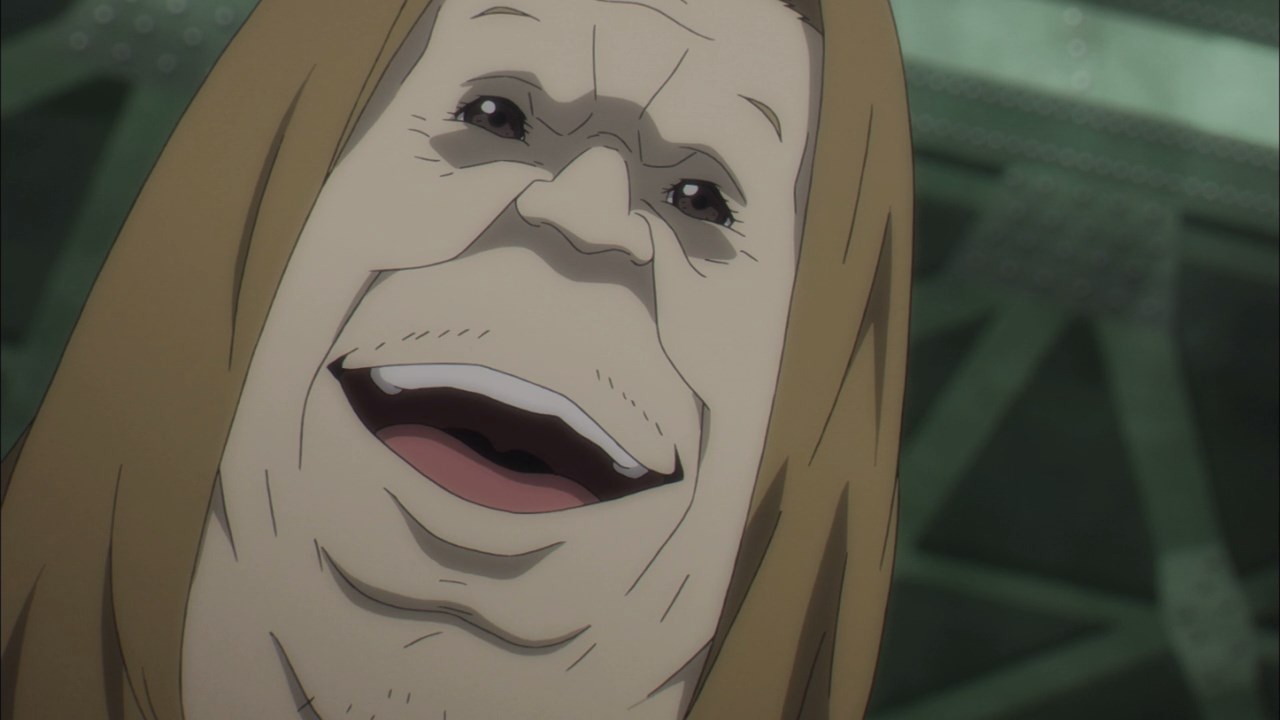 Turns out, Spooky E told her that the Towa Organization decided to kick Aya (or Camille) out as she failed to create an offspring.

This means that Spooky E has no use for Camille anymore and instead use the impostor instead for his organization’s plans on controlling the world. 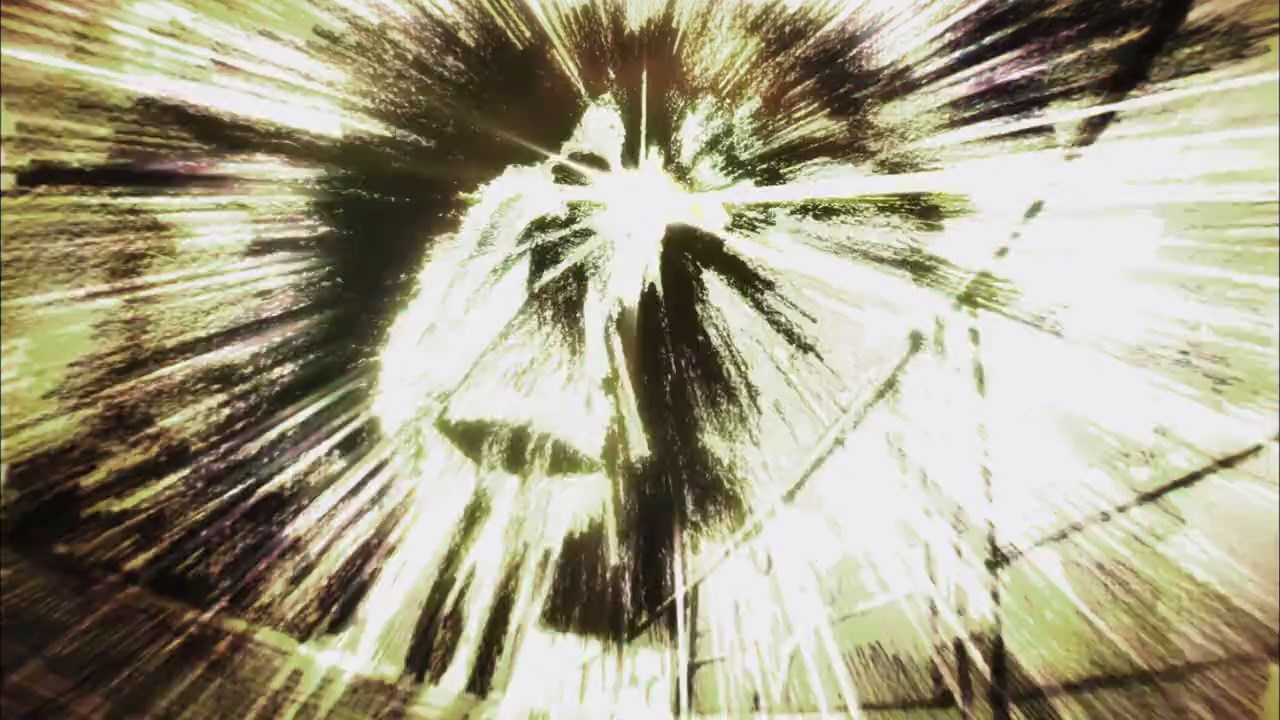 And so, Spooky E knocked Aya Orihata (or Camille) out cold and leave her to die in the streets as he prepares to take on Boogiepop and the mysterious Imaginator. Of course, little did Spooky E (and the Towa Organization) knows that the Imaginator is a bigger threat to them apart from Boogiepop.

But anyways, looks like there will be a three-way battle with Masaki Taniguchi being caught in the middle. Lastly, this last shot on this episode is magnificent in my opinion, but then I fear that both Taniguchi and Orihata will die once the battle commences. Unless Boogiepop and Nagi Kirima do something to save both of them, it’s inevitable.

With that said, I’ll see you next time where I have a feeling that second story arc is reaching its climax.