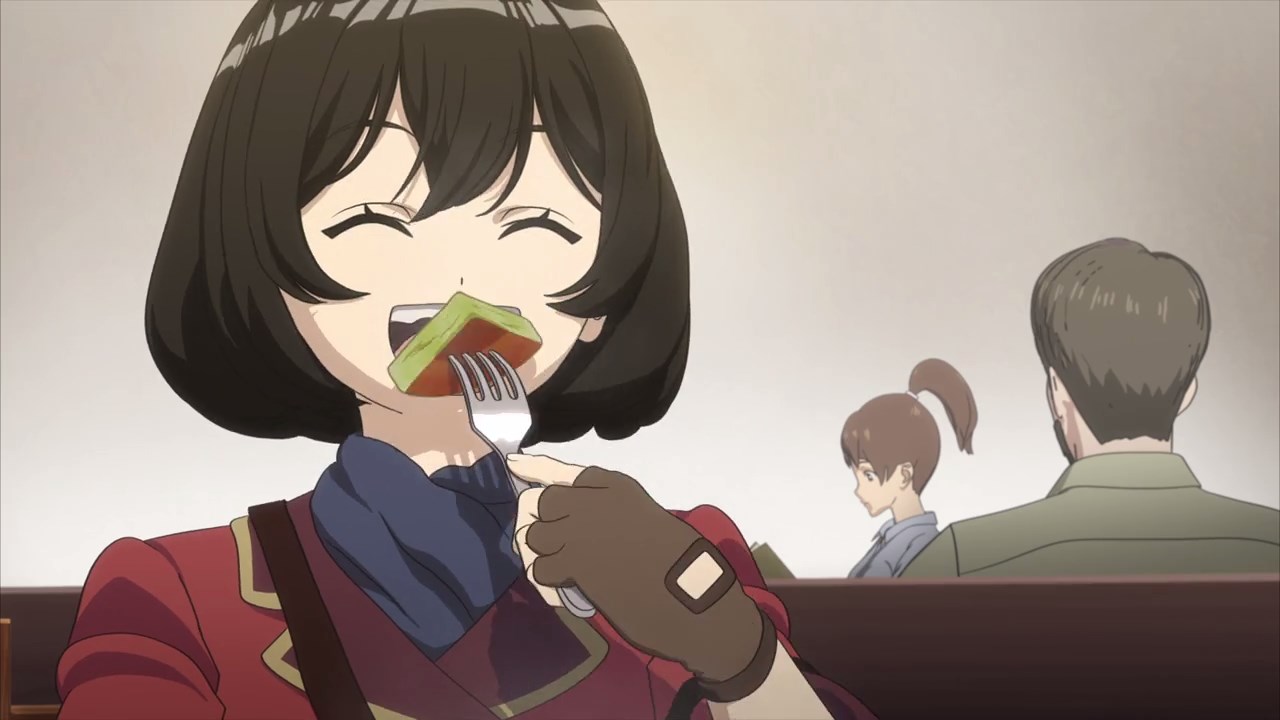 Well everyone, here’s Kirie as she still loves eating pancakes. Come to think of it, I think she should become a connoisseur and make a book about all kinds of pancakes across the world. 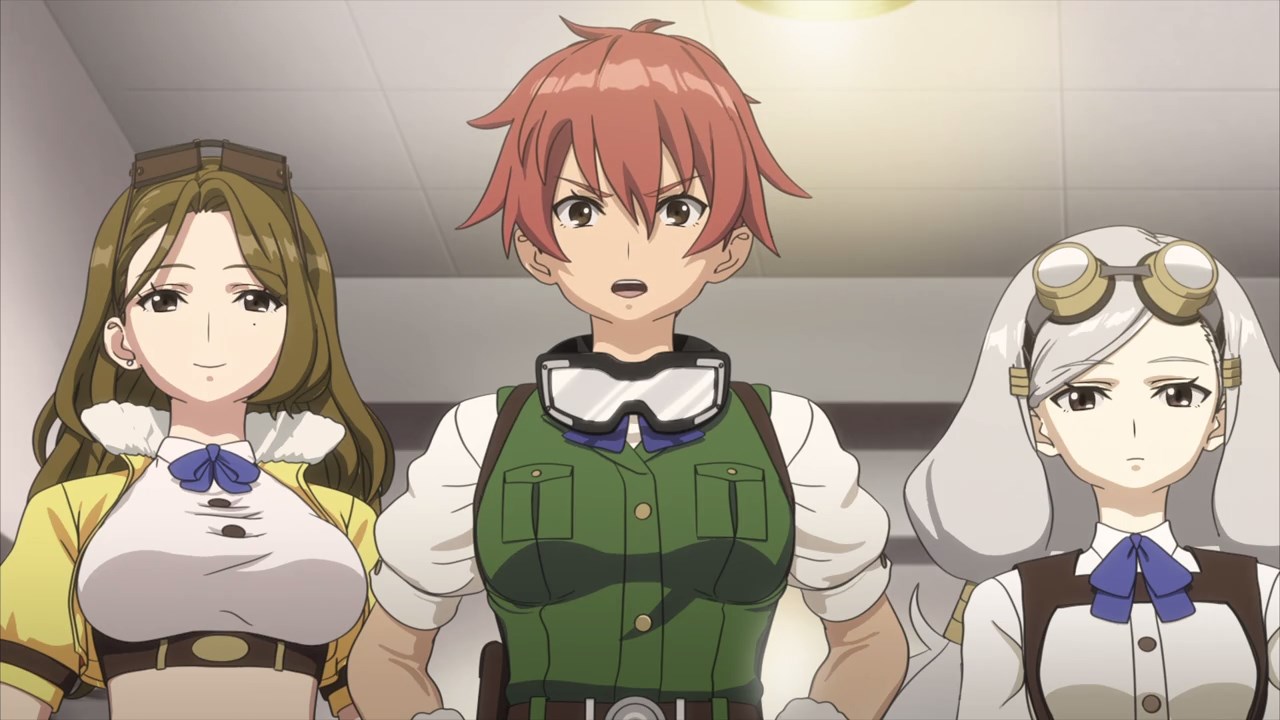 Unfortunately, Kirie’s dreams of becoming a pancakes connoisseur will be put on hold, as Reona told Kirie to manage her flying permit and other documents when visiting Areshima. Otherwise, she’ll get deported. Man, Reona is so uptight! 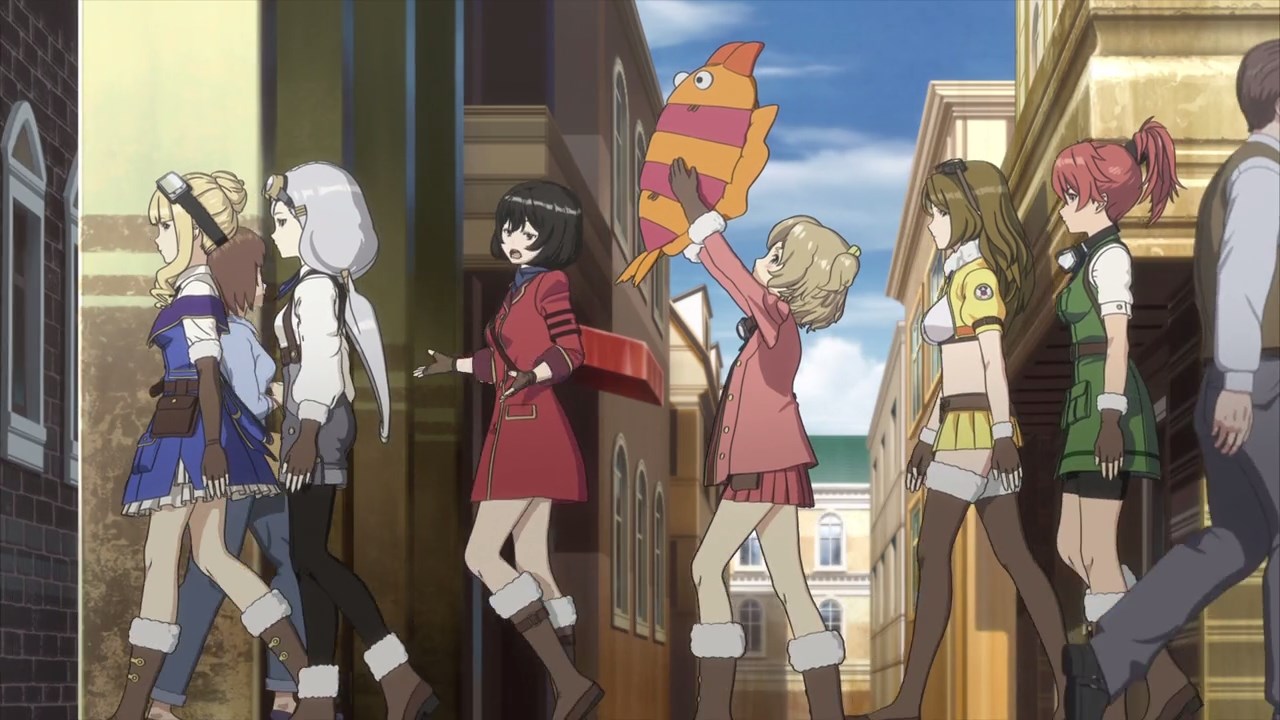 Anyways, the Kotobuki Squadron are here at Areshima to relax after their tough mission to recover the Raiden airplane back to the mayor of Rahama. Then again, Kirie and the rest will have their vacation cut short… 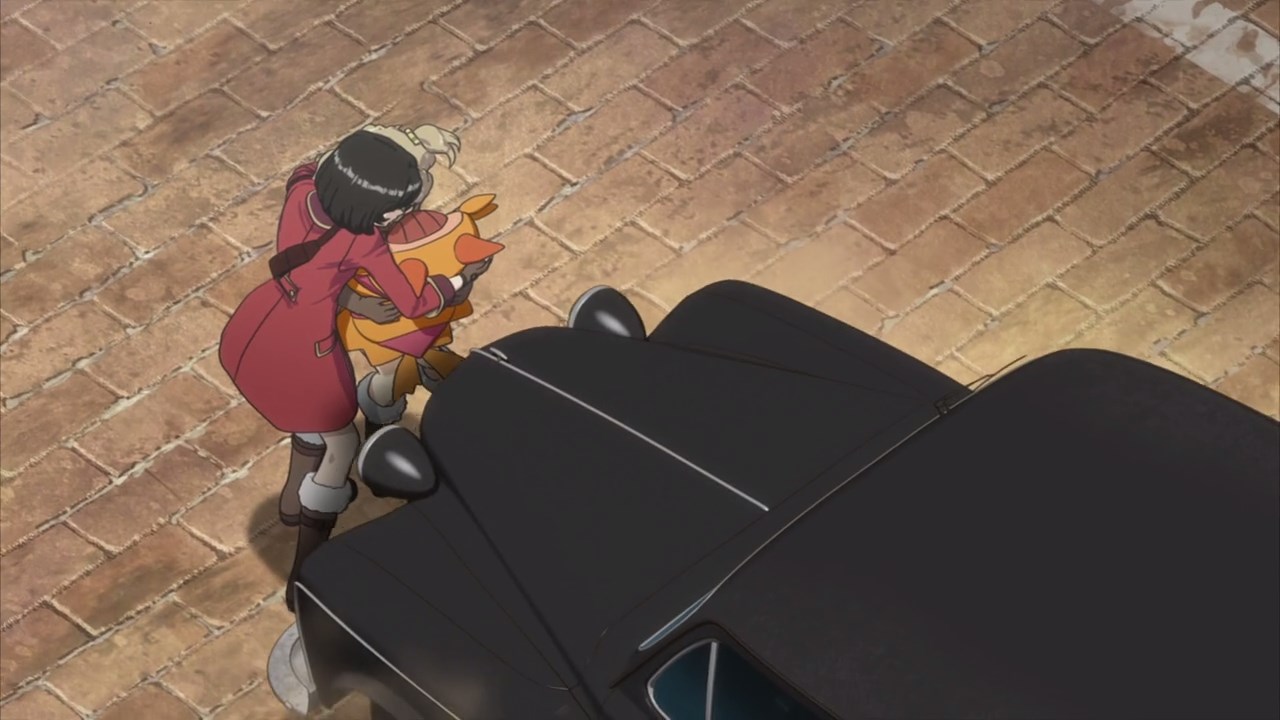 …especially when Kirie and Chika almost got caught in a car accident. Good thing both girls survived by damn, that was a close call!

While it’s best to look across the road in order not to get run over, I’ll say that it’s the driver’s fault for not paying attention to pedestrians. 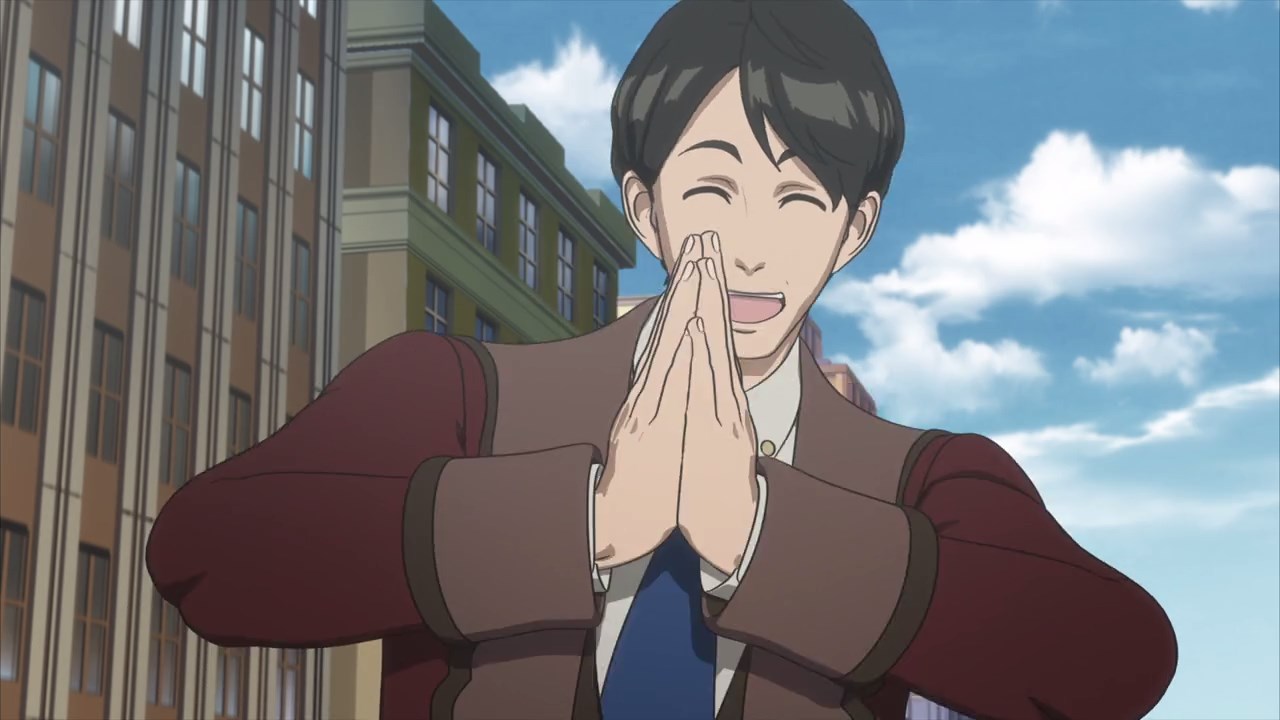 Anyways, this man got out from the car and apologized to both Kirie and Chika for almost causing an accident. In exchange, he’ll give something to them… 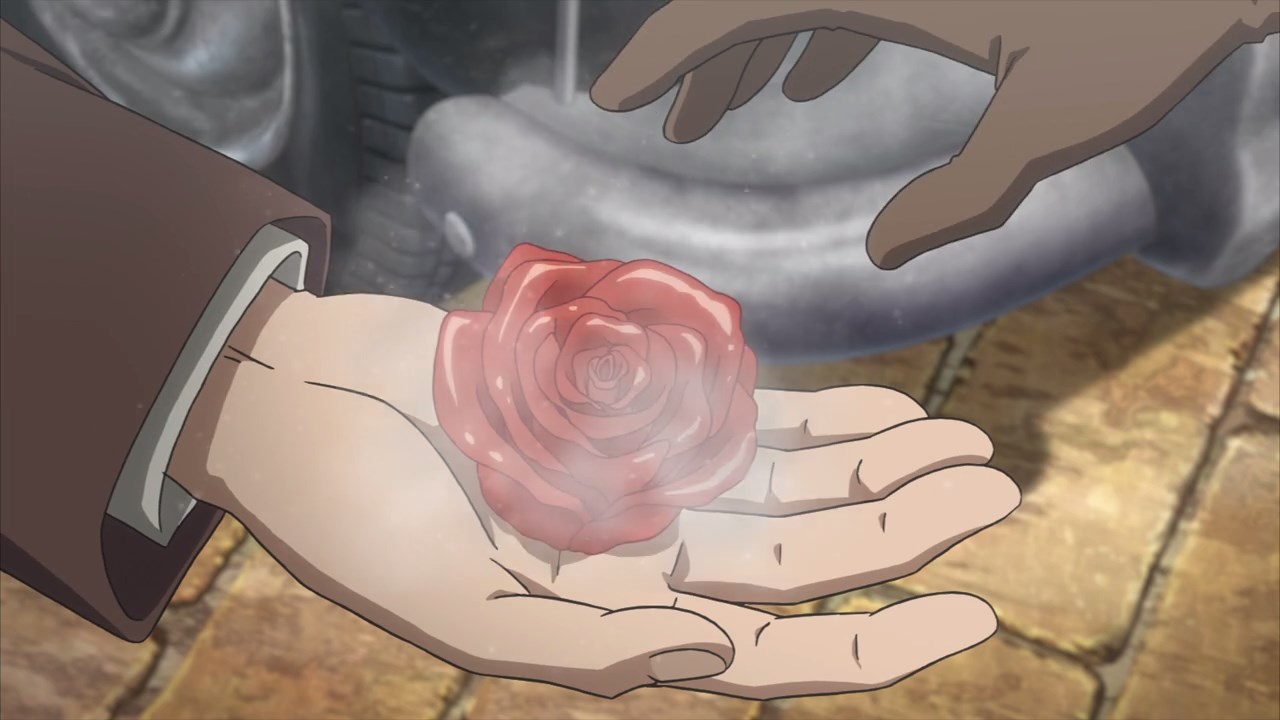 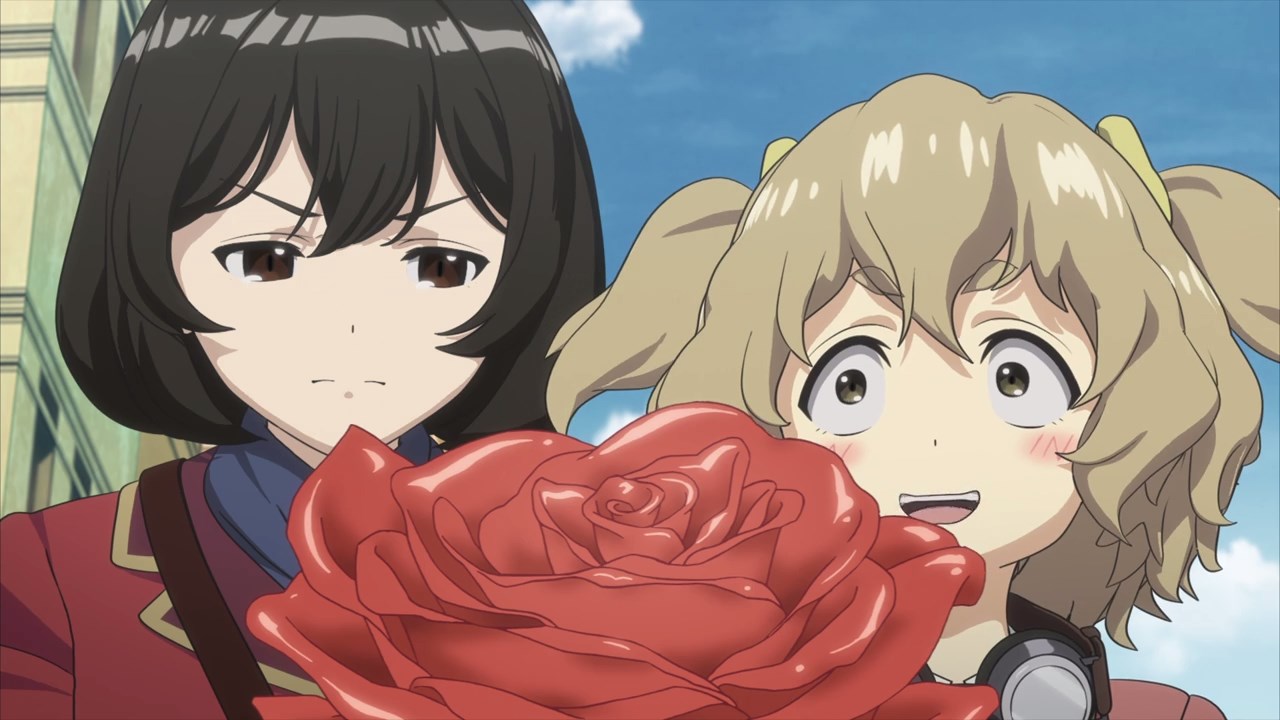 …like this red rose that appeared out from his coin which surprised both girls. Then again, Chika got that shocking face and man, the animators should fix her uncanny face! 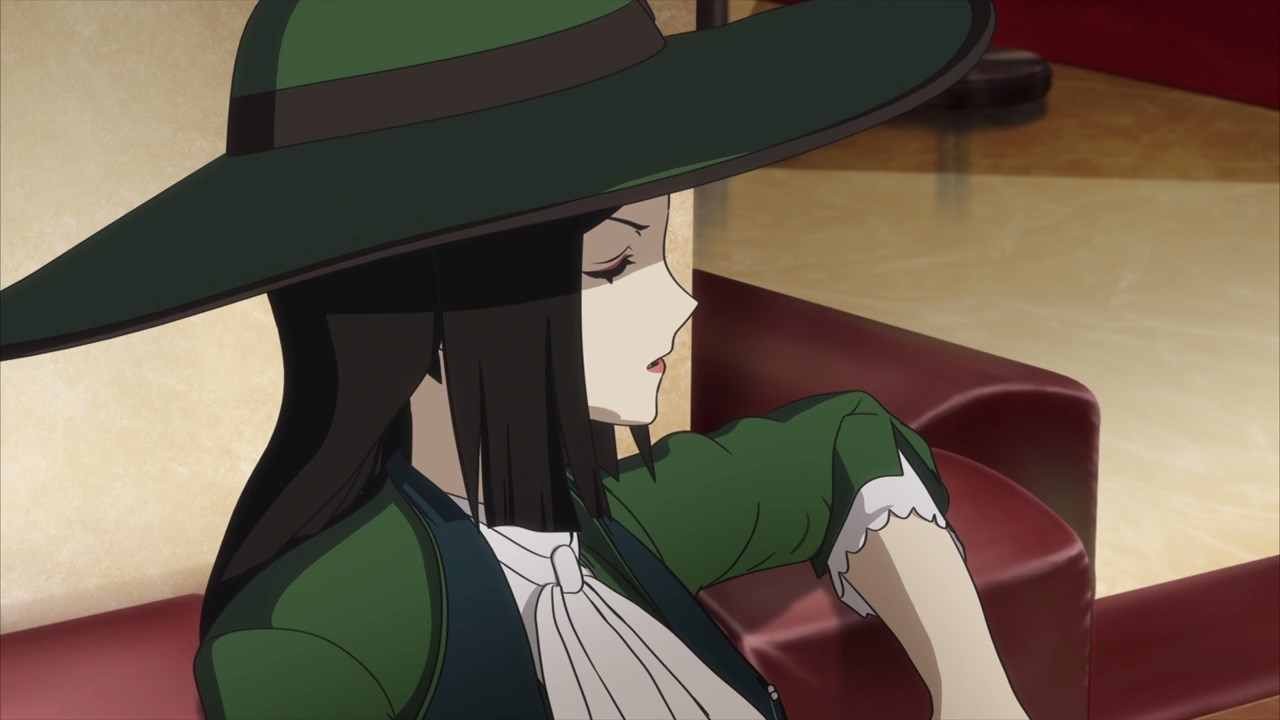 Now then, let’t move onto the next scene where the Kotobuki Squadron’s rest period got cut short as they’re recruited by Councilor Julia for her protection against pirates.

Oh, and aside from Julia, she needed the squadron to protect another important person who will be the next head of Ikesuka. This person that the councilor will have a dialogue will be Isao… 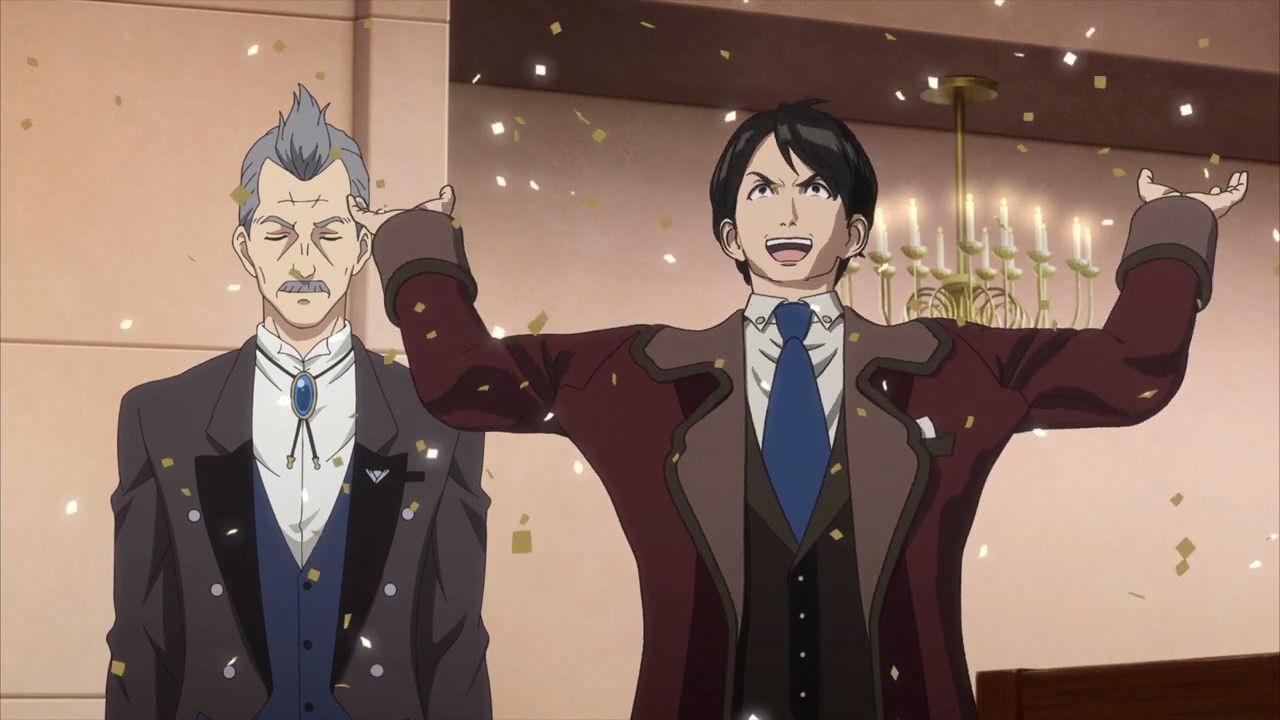 …who happened to be this guy performing magic trick as he’s joined by his butler. By the way, Isao’s butler is animated traditionally whereas the man himself is made using CGI. 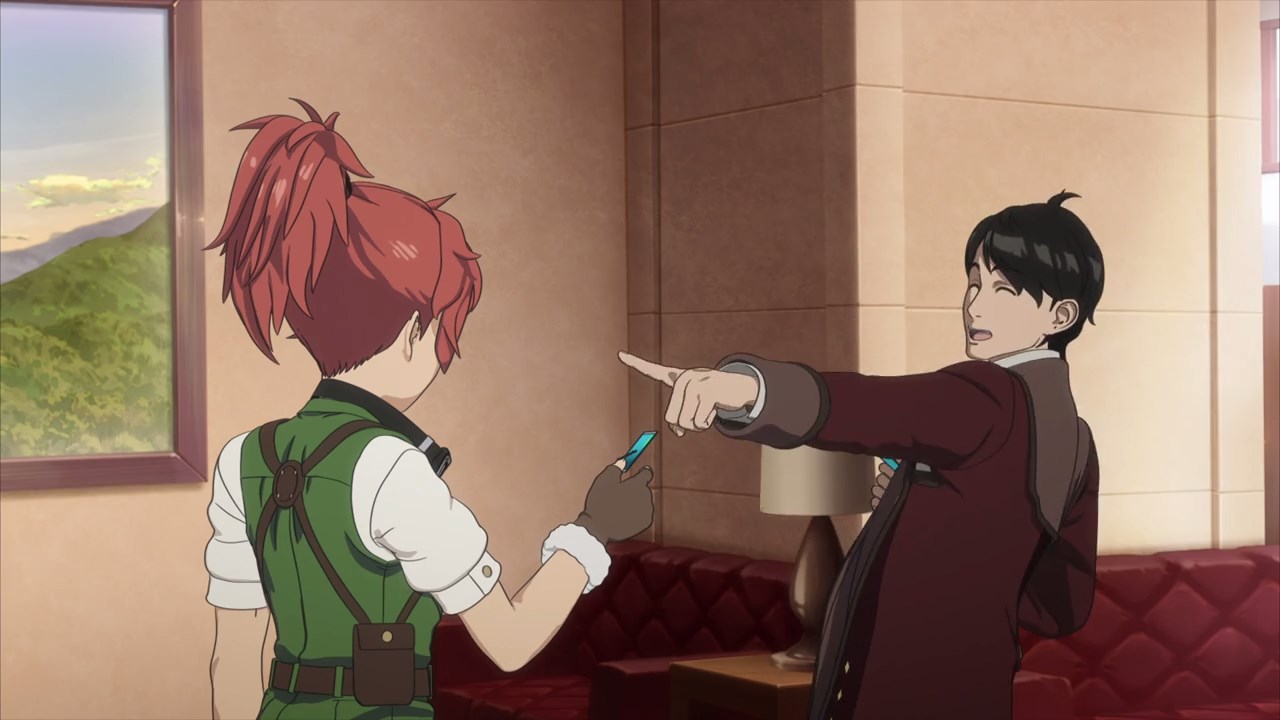 Anyways, Isao is happy to work with the Kotobuki Squadron by giving them a prank or a magic trick to break the ice. Then again, Reona didn’t react much to Isao’s chewing gum trap trick.

Speaking of Reona, seems that she felt silent when Isao is talking to her. I wonder if she has some relationship with that guy? 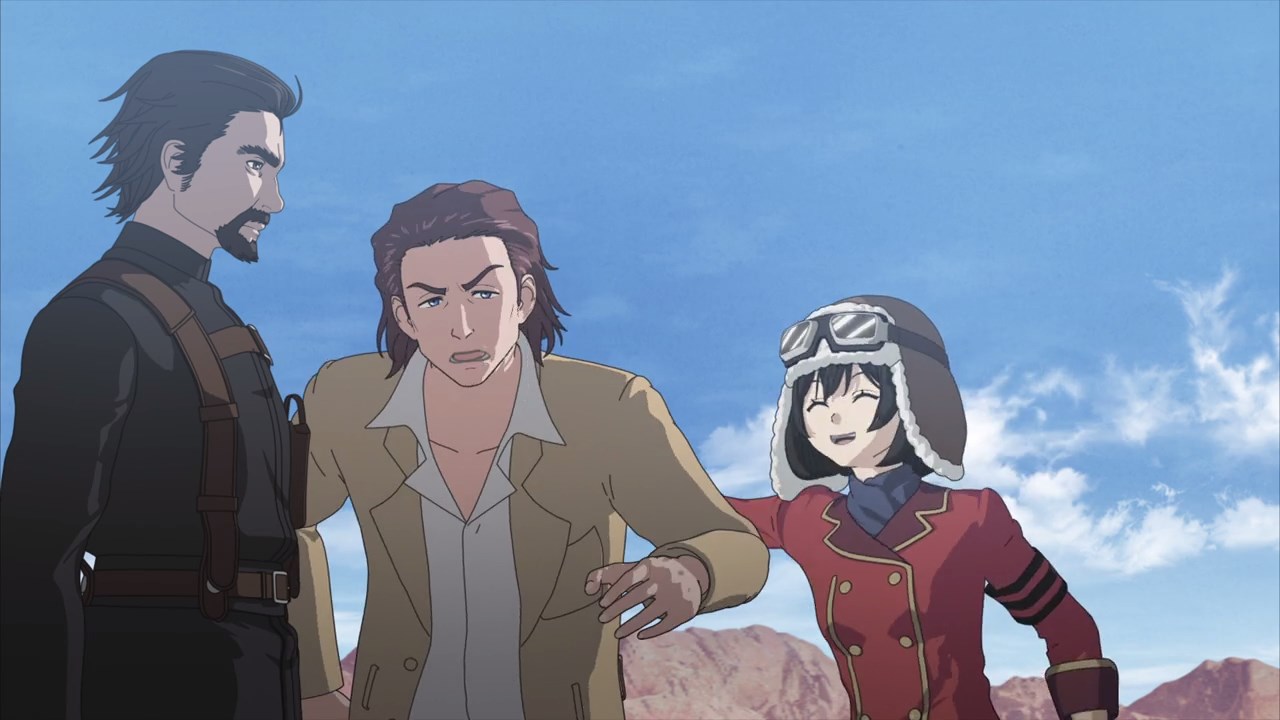 Oh and by the way, looks like the Nazarene Squadron are here too, but it appears that they become a two-man team after their disastrous mission from the first episode. 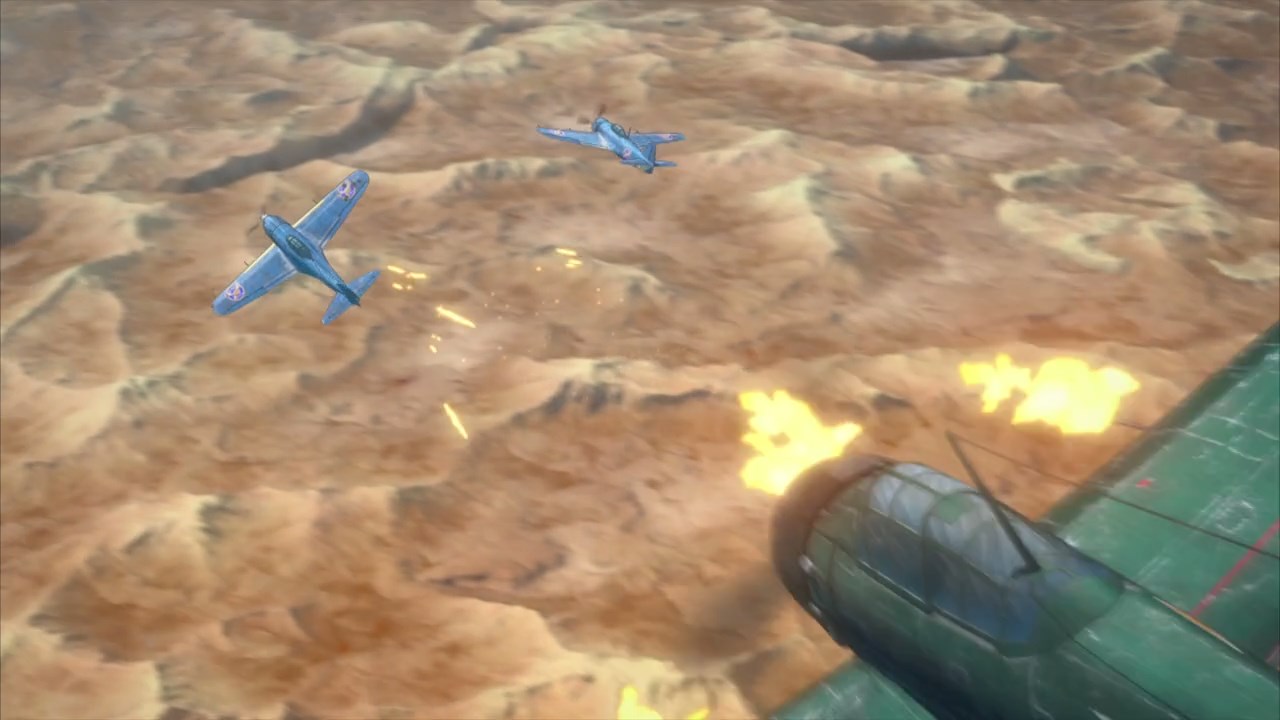 Even worse is that the Nazarene Squadron couldn’t fight a large enemy air force. Therefore, it’s best for them to run away or they might get shot down. 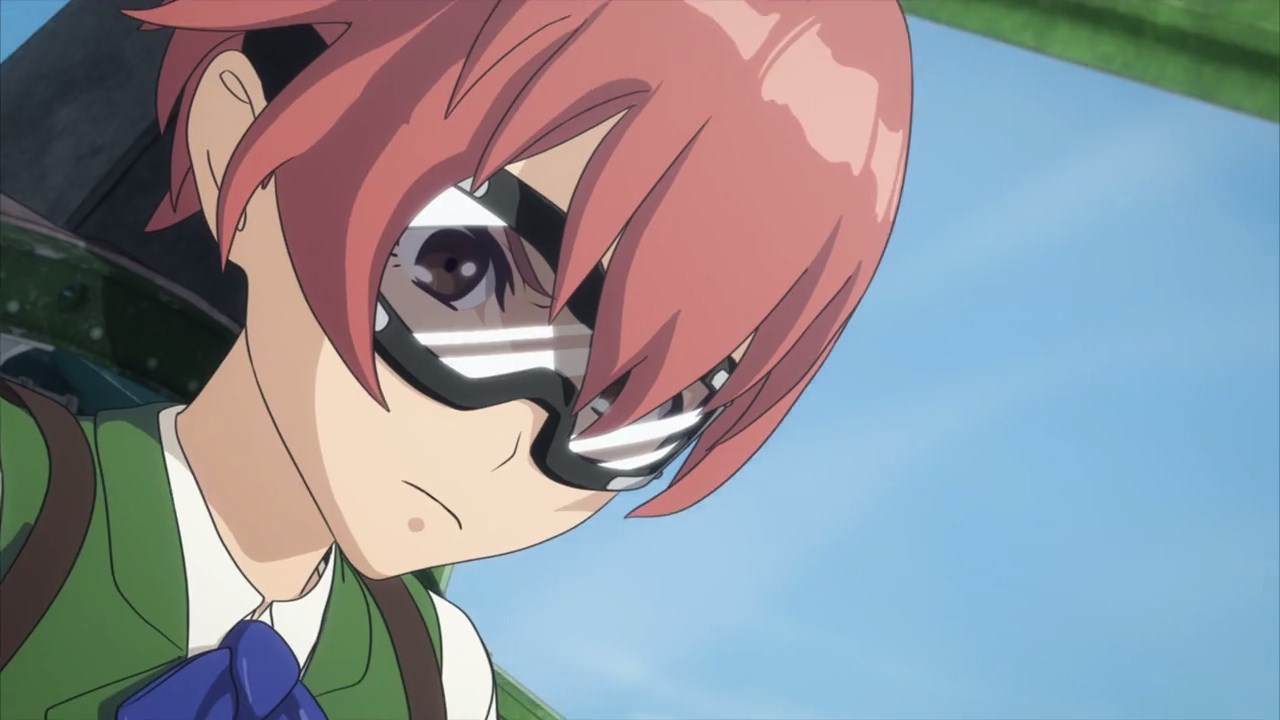 Meanwhile, here’s Reona as she’s acting strangely during the dogfight, gunning down an enemy airplane whether it’s a small fighter or a large bomber.

In fact, Zara calls her as the “Tenacious Reona” as she won’t give up until the plane is destroyed. However, Reona’s sudden stubborness might put herself and others into danger. 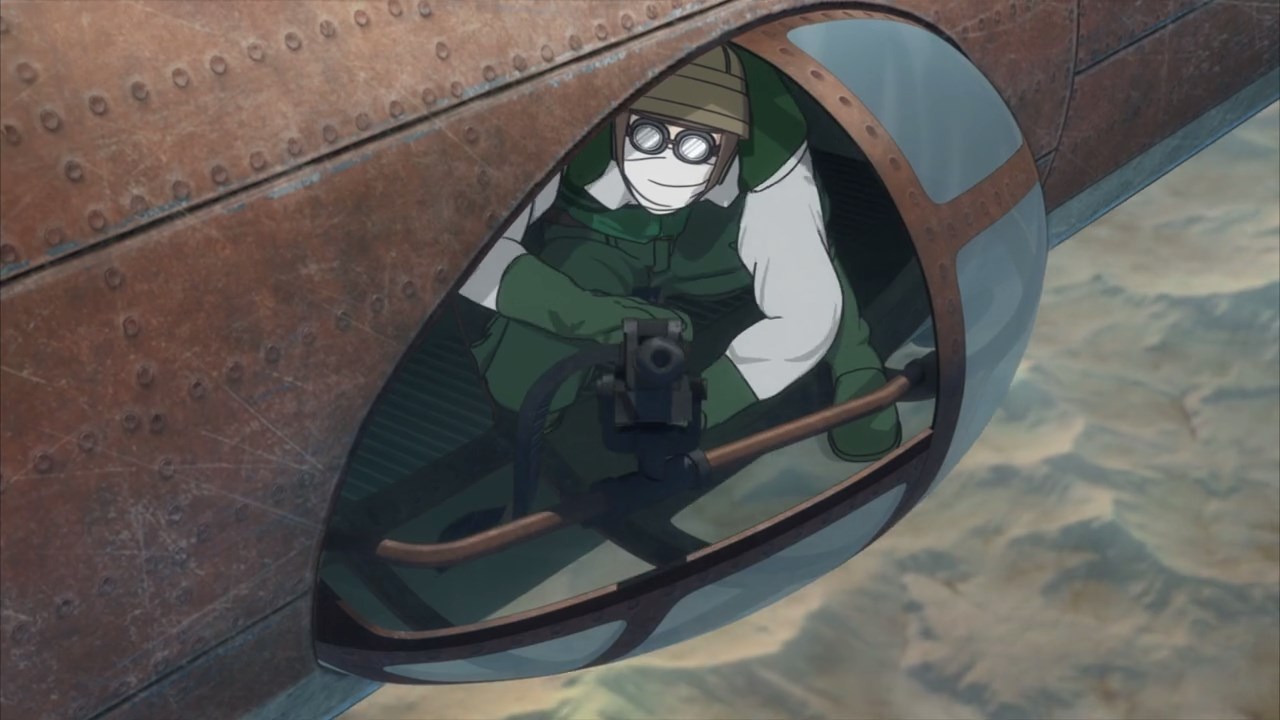 As you can see, this bomber is well-equipped with gun turrets to defend itself from enemy fighter plane. Reona is no exception as she’s about to get shot down by this enemy bomber. 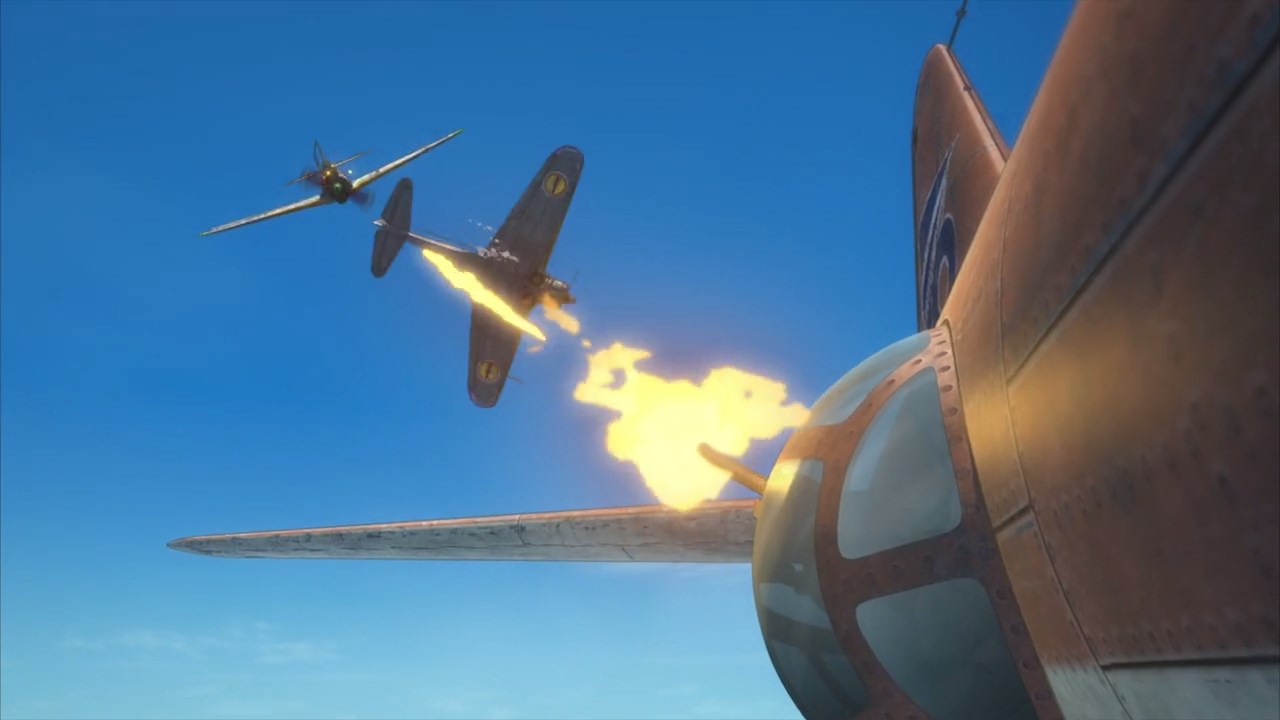 Fortunately, someone took the hit which leaves Reona still flying in the air. Man, who’s the one who saved Reona’s life. 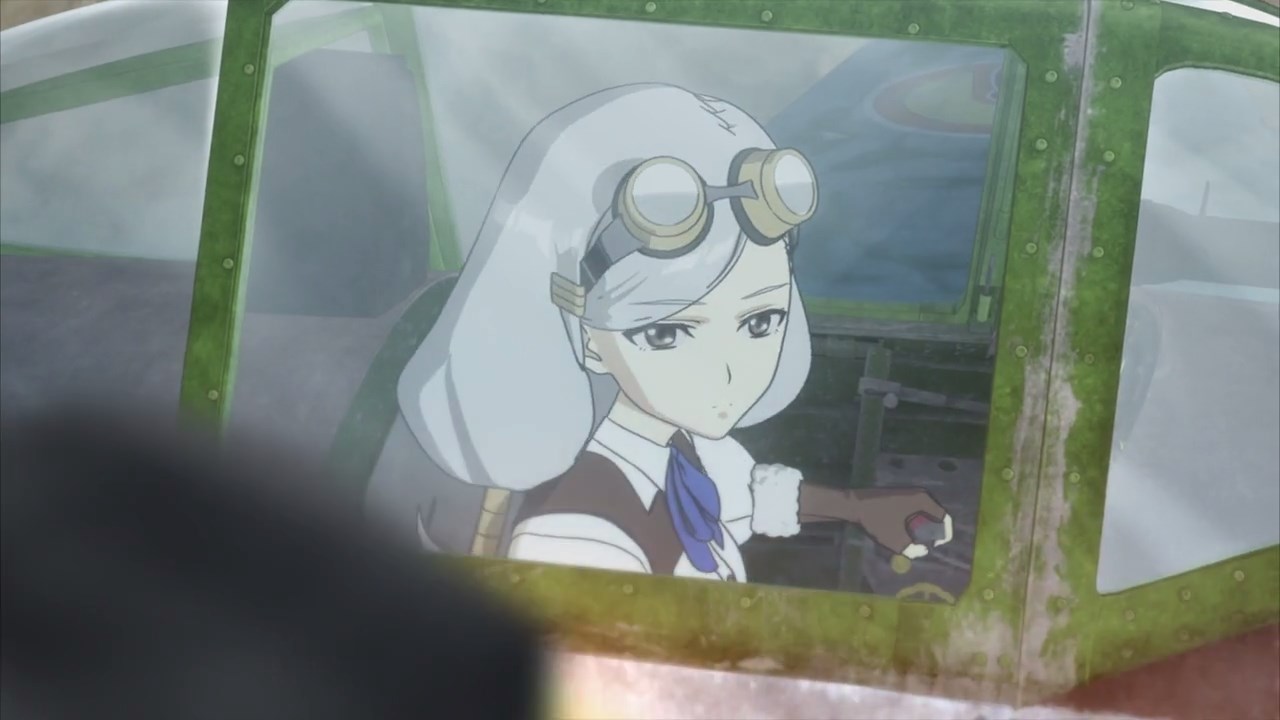 Oh, turns out that Kate took the machine gun fire but man, let’s hope that Kate survives and fight for another day. 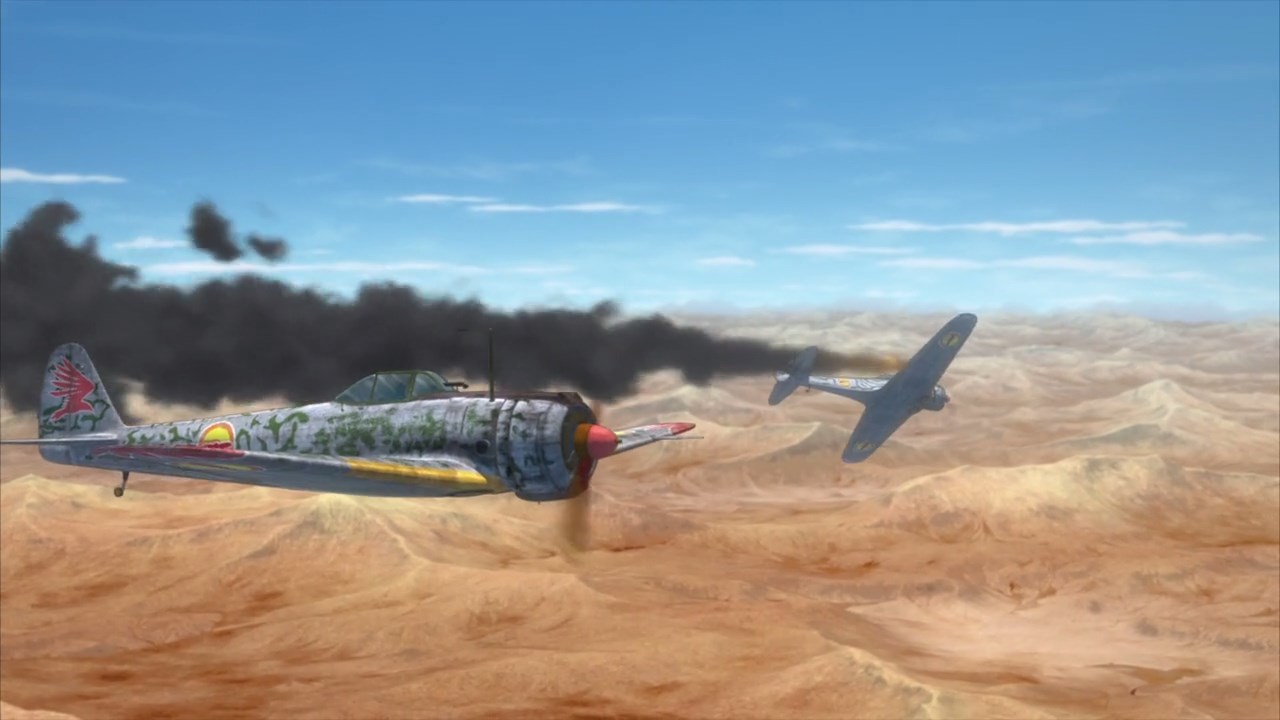 Then again, I’m worried that she might have a bad crash landing which will leave Kate dead. Seriously, I hope she survives on the next episode! 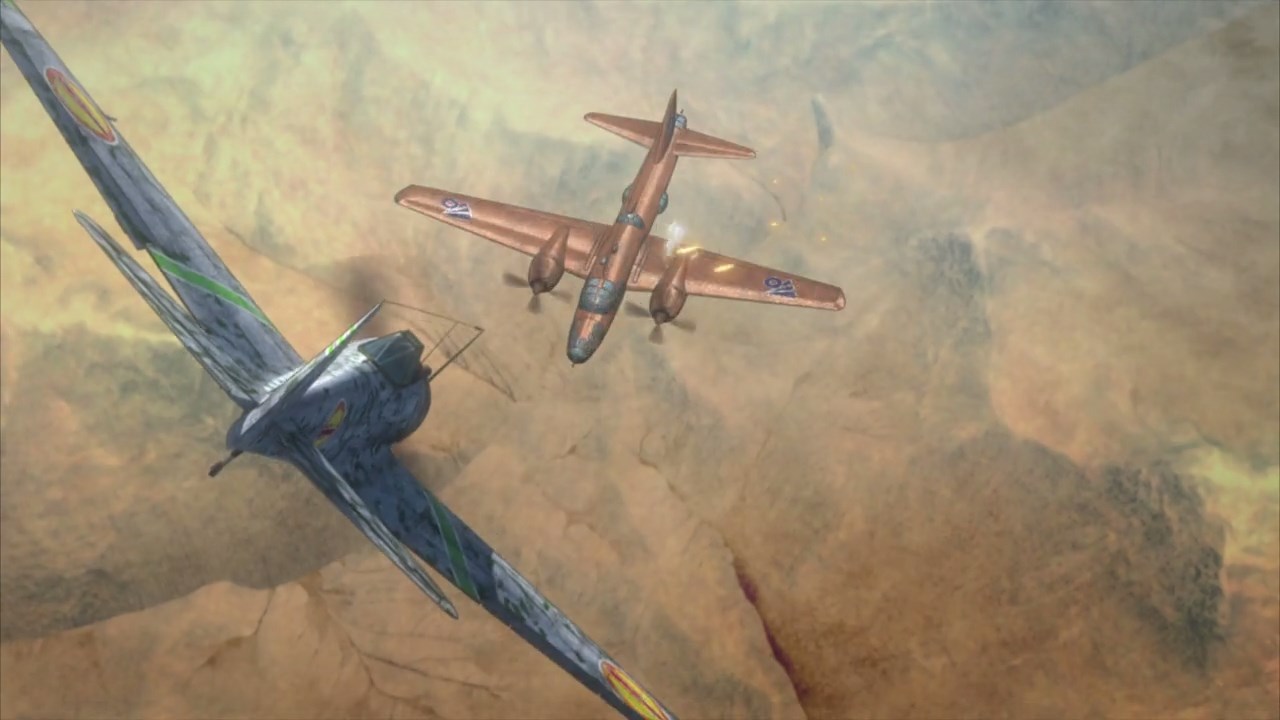 But now, it’s time for everyone to snap the hell out of their leader so that Reona can finish the job with the rest of her team.

Thanks to Kirie and the rest of the Kotobuki Squadron, Reona managed to clip one of the bombers’ wings with lead. 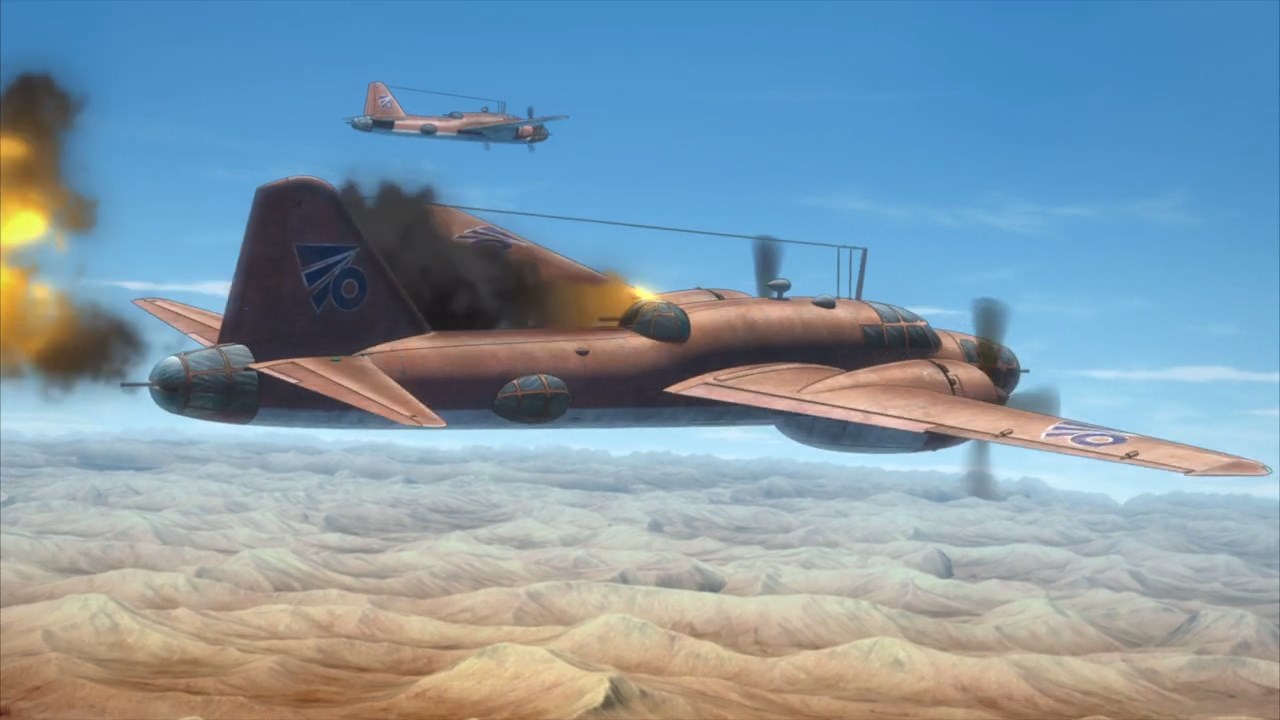 With that said, one bomber down and another one to go. However, it appears that the remaining bomber will go straight to Areshima and wreck the town with an explosive payload.

With no time to chase the remaining bomber, it appears that it’ll be another failed mission yet again. 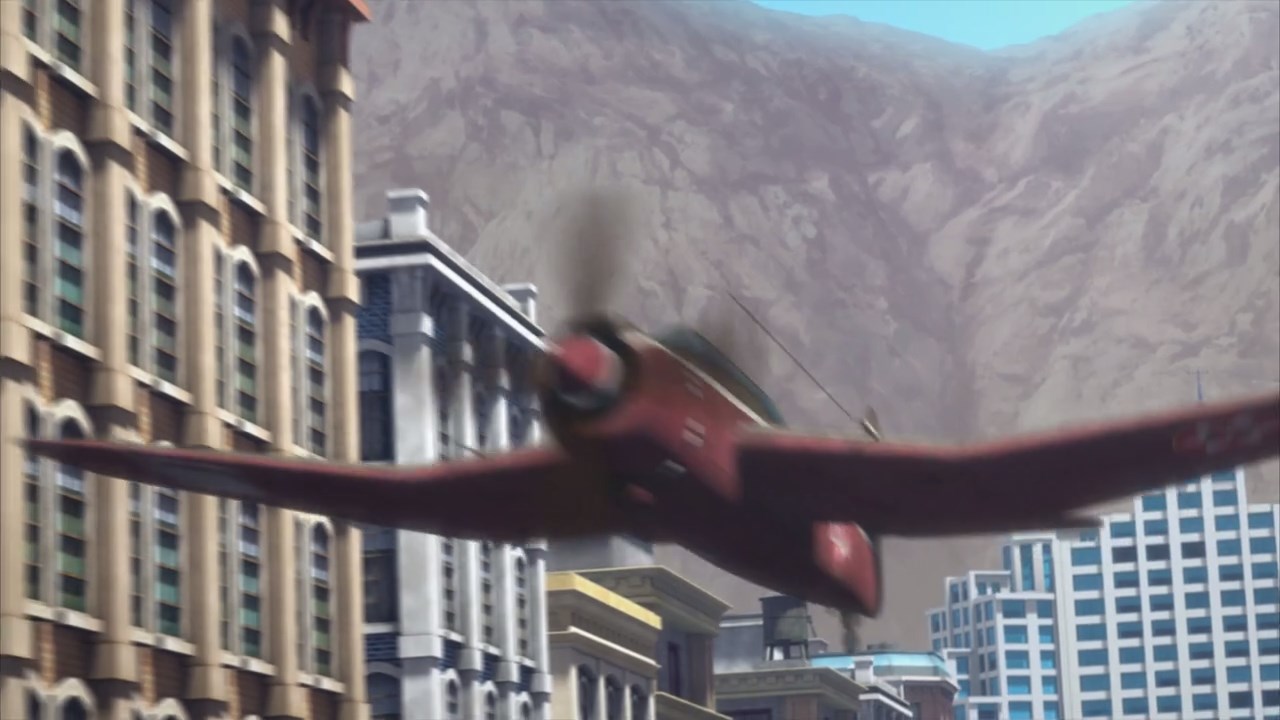 However, seems that there’s another fighter plane heading straight towards the enemy bomber. Who is engaging the enemy? 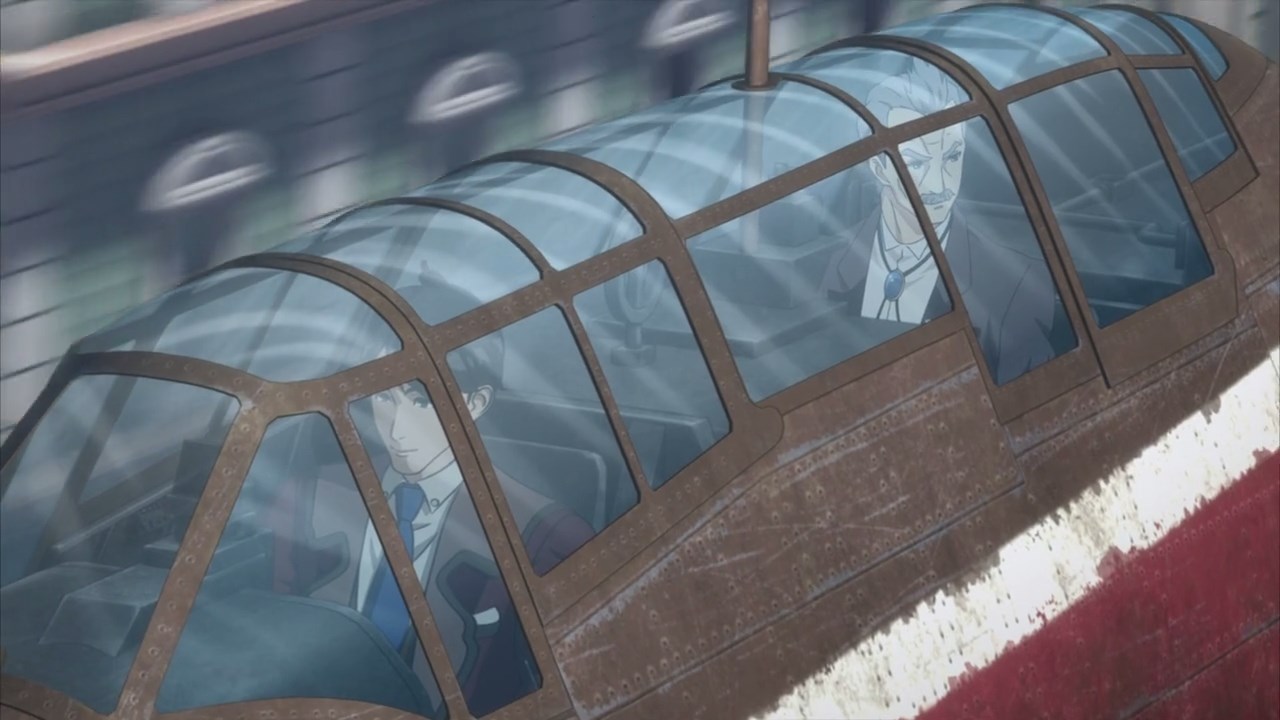 It turns out, this fighter plane is being piloted by Isao and his butler. Wait, is he supposed to be fleeing the enemy because Isao is an important person?

But here’s the most surprising part of Isao as he was once the most feared fighter pilot which everyone called him as the “Soaring Magician”. Oh, and it’s even more interesting is that Isao is the one who saved Reona’s life, which is why she’s indebted to him. No wonder Reona is acting weird when Isao appeared. 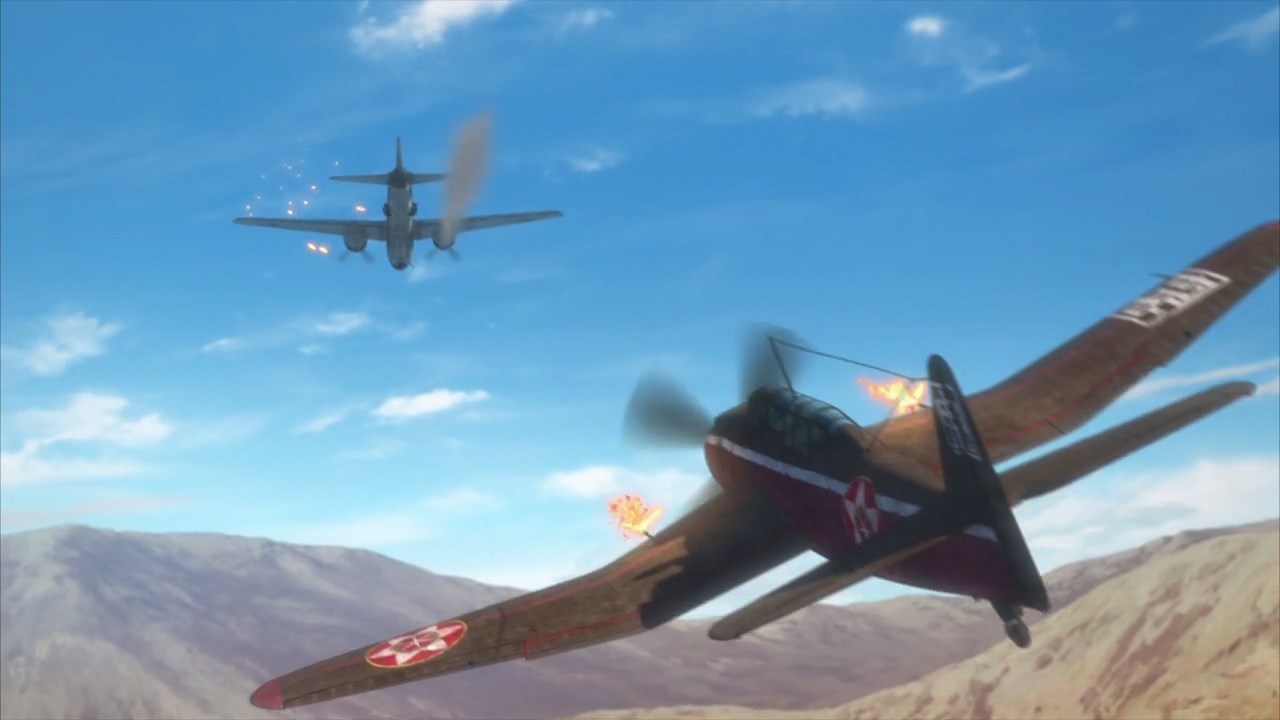 Anyways, Isao and his butler show their amazing acrobatic skills to outmaneuver the bomber until they have the opportunity to destroy the enemy from below. 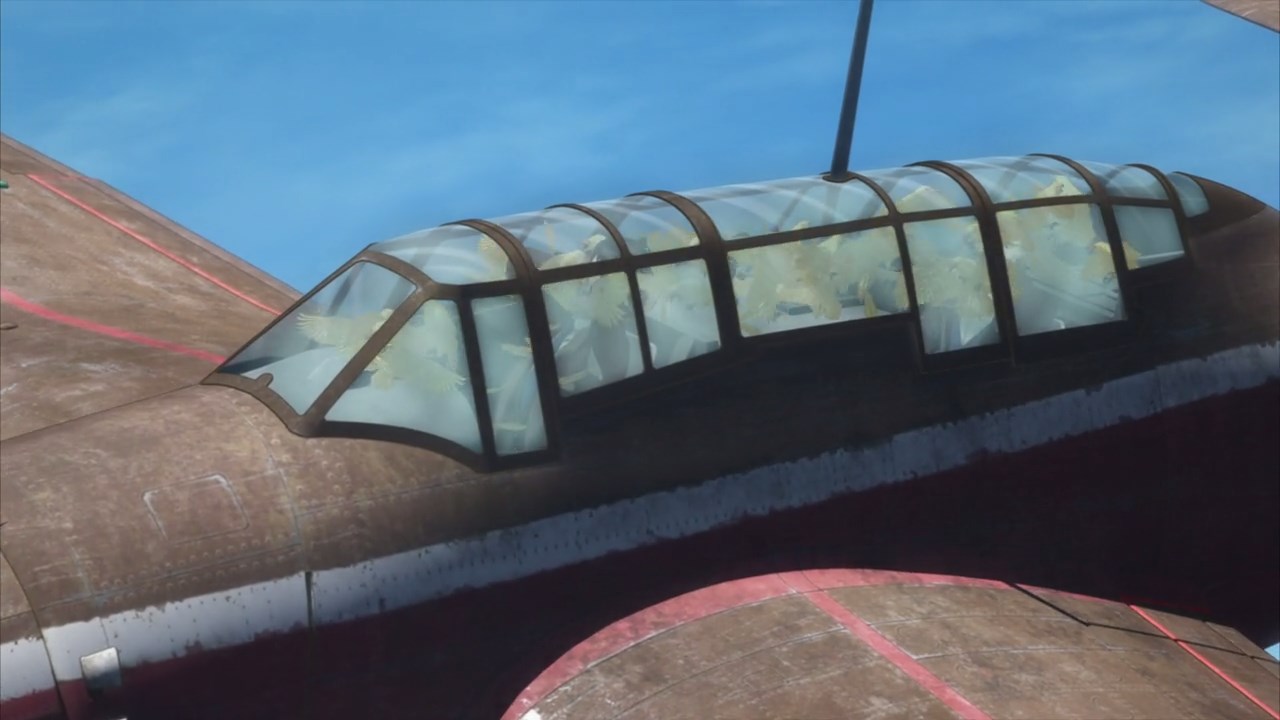 But after showing what he can do against the enemy, Isao got carried away and made another magic trick which obscures his field of view together with his butler.

Well, Isao shouldn’t do that when piloting an airplane. But it’s great that despite being a wacky person, his reputation as the Soaring Magician still holds true to this day. 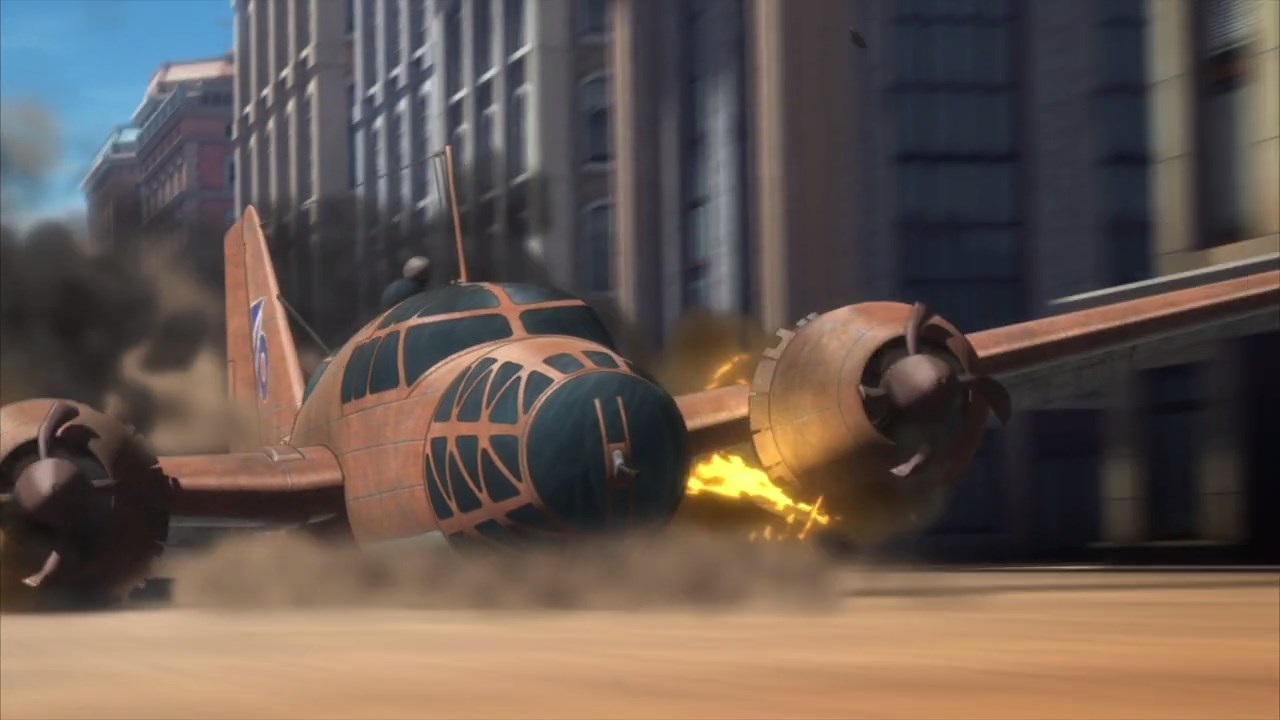 Then again, one of the bombers is about to crash towards the hotel where Councilor Julia currently stays. Man, they should have destroyed this bomber before reaching the city. 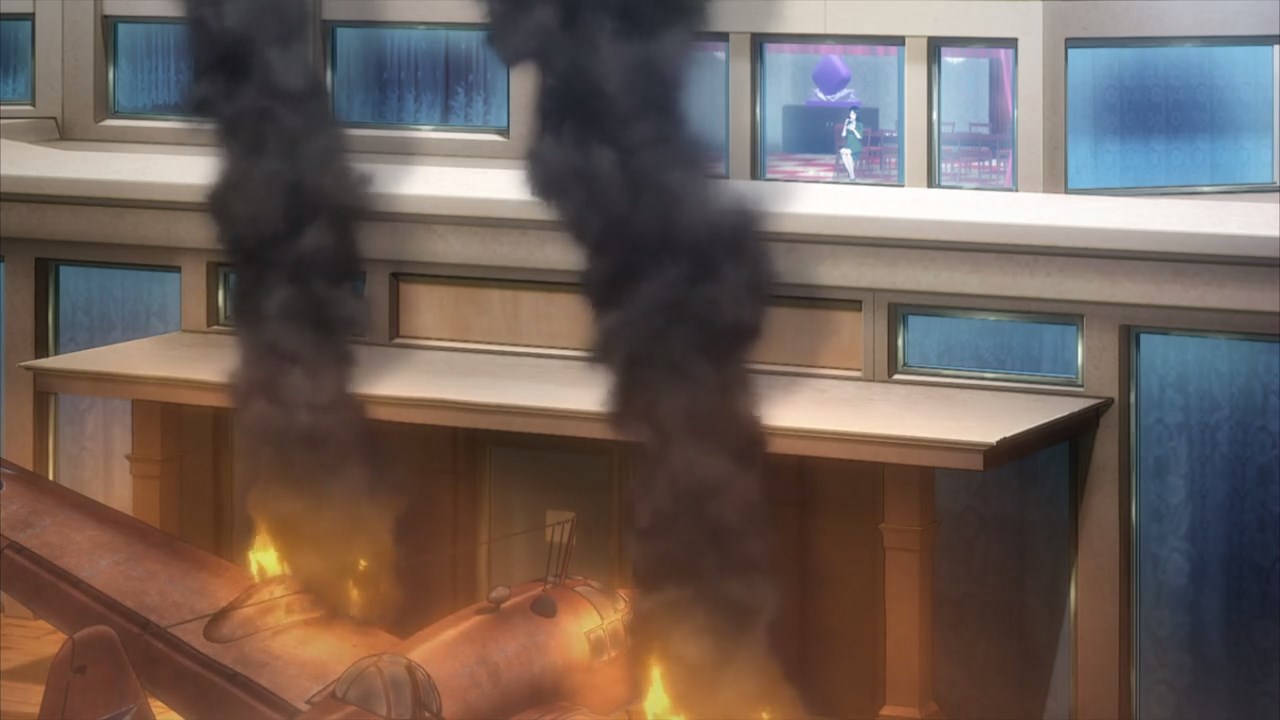 Fortunately, the bomber just screeches to a halt as the tip of the nose barely touched the front door. Glad that it didn’t wreck the hotel where Councilor Julia is inside. 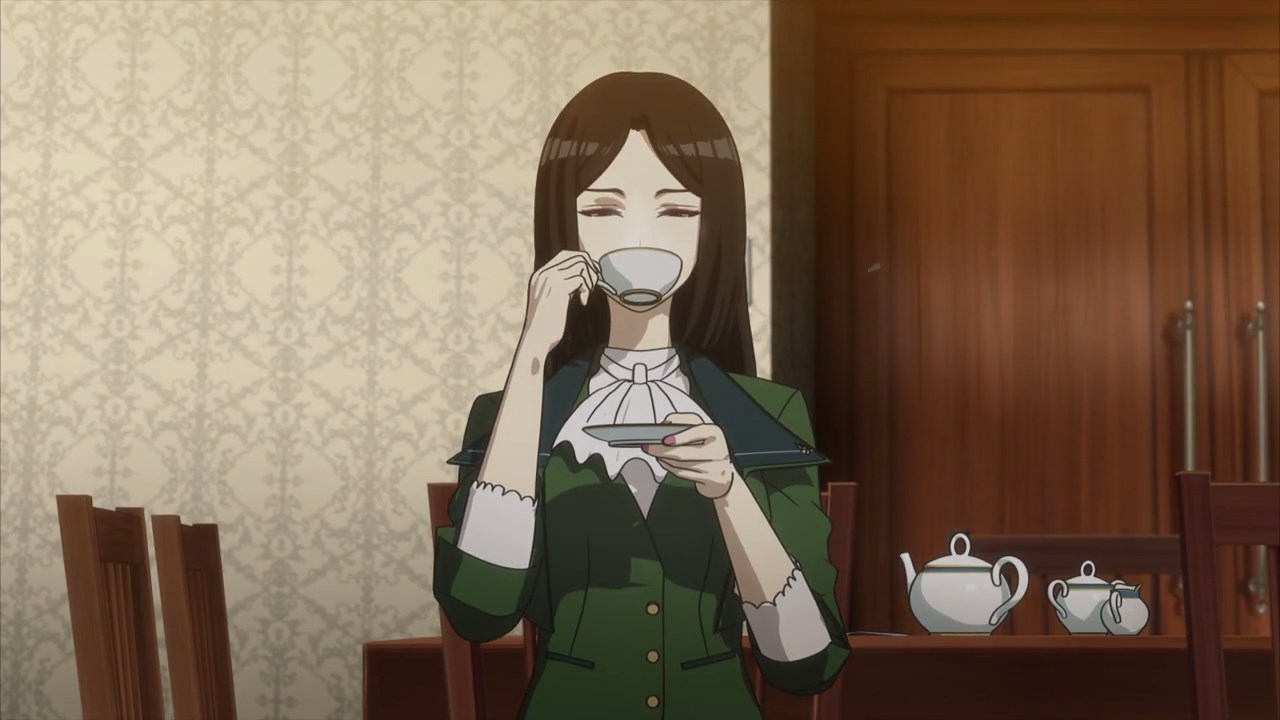 And the best part? Julia just sits there drinking tea like a boss after the bomber stops in its tracks. She didn’t even flinched, which is damn impressive from this haughty councilor!

With that said, Areshima is saved and the meeting between Isao and Julia is successful, although I’m not sure what they talk about during the meeting but I hope they resolve the ongoing crisis such as pirates and energy supply that made the world into an inhospitable place.

Oh yeah, and as for Reona, I’m surprised that I saw something that’s different from being the uptight leader of the Kotobuki Squadron. Sure that what she did in the early parts of the dogfight was reckless, but Reona’s life was rescued by her fellow squad-mates although she’ll felt indebted towards them. Then again, I think there’s no need for her to repay them.

Anyways, I’m done with Episode 5 as I’ll see you next time!