Here’s Rikou Takitsubo as she’s being examined by a local doctor. Unfortunately, they couldn’t find a cure to her crystal deficiency and the only way to save Takitsubo’s life is to find a specialist. 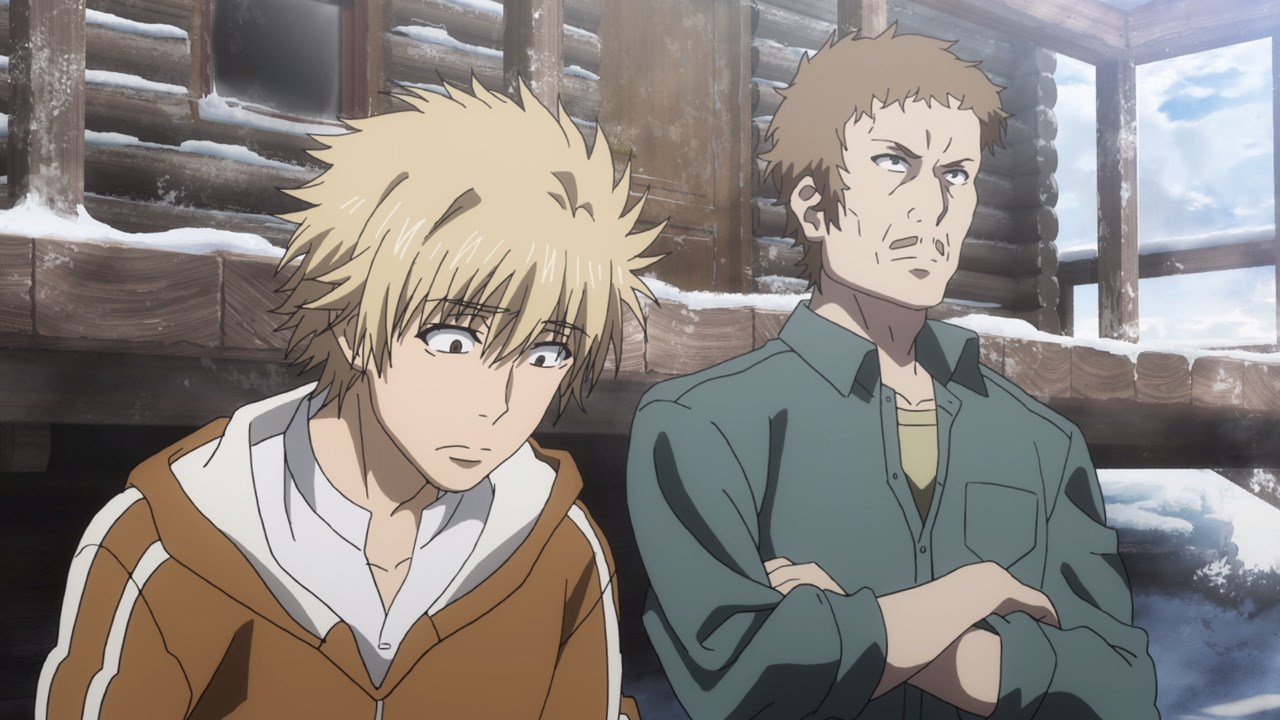 For Shiage Hamazura, he’s out of luck that Hamazura is stuck with a dying companion and a war-torn place. Hell, they can’t go back to Academy City because Shizuri Mugino is about to kill them both! 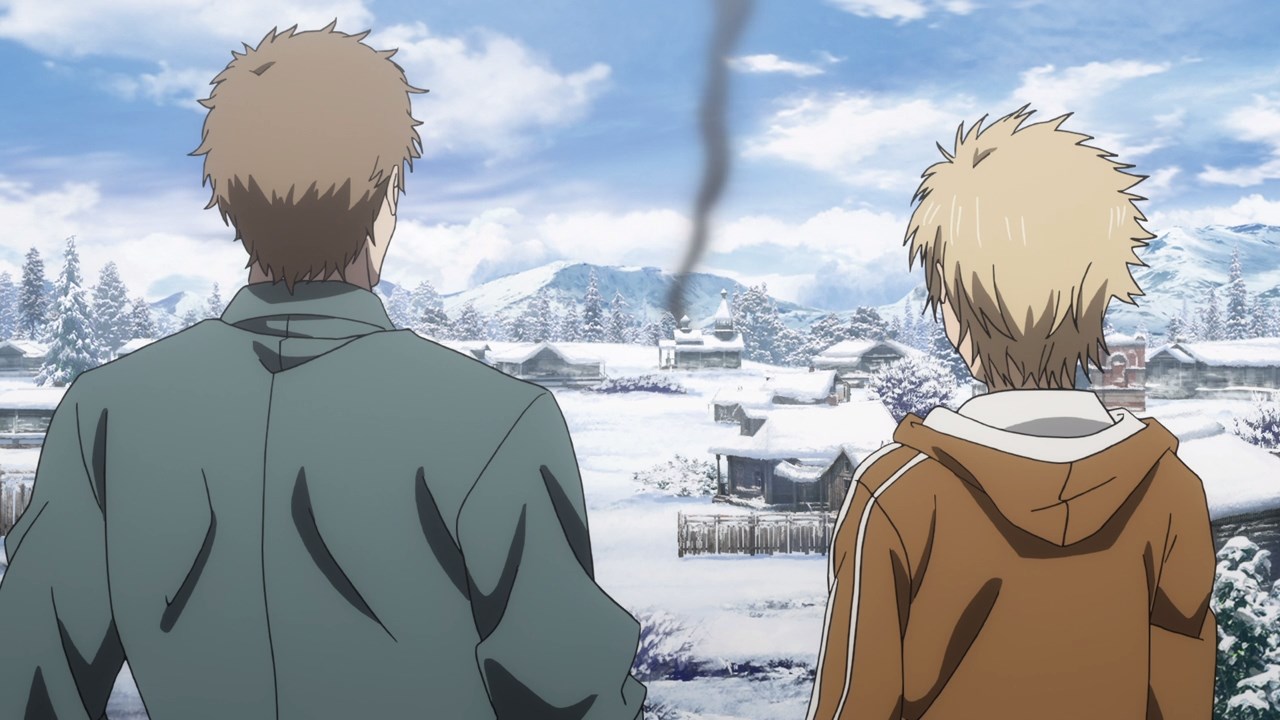 And speaking of war, it appears that the enemy is coming to ransack this place up. 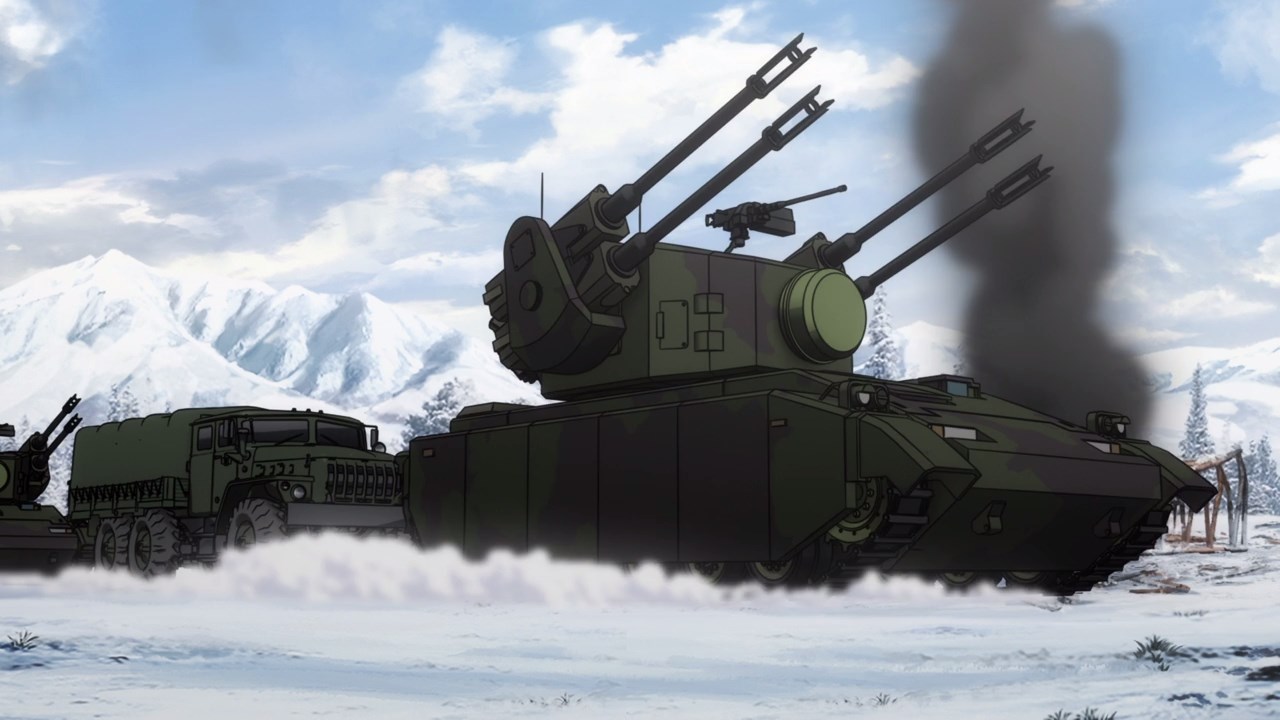 For you see, the villagers are not prepared to deal with mercenaries who are armed to the teeth and about the ravage the village at any moment. 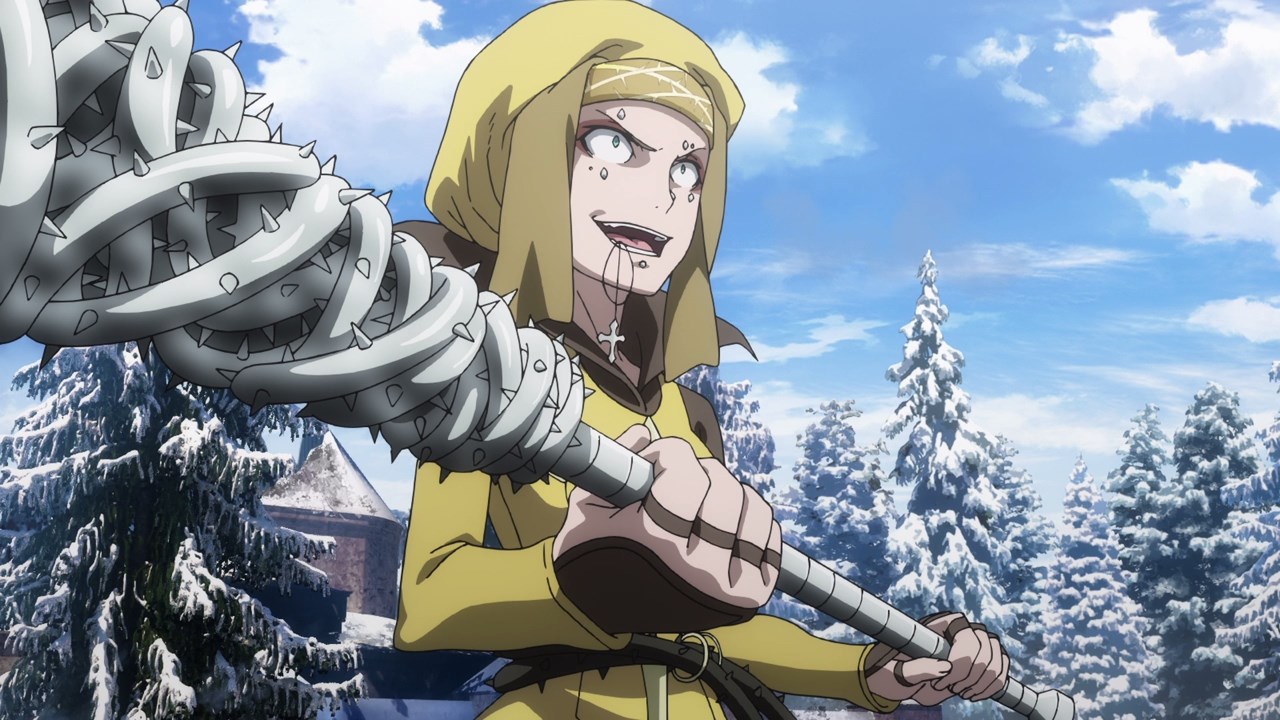 Now let’s go back to Vento of the Front where she’s about to kick Fiamma’s ass for turning the world upside down. Not only she has her Wind Hammer on hand… 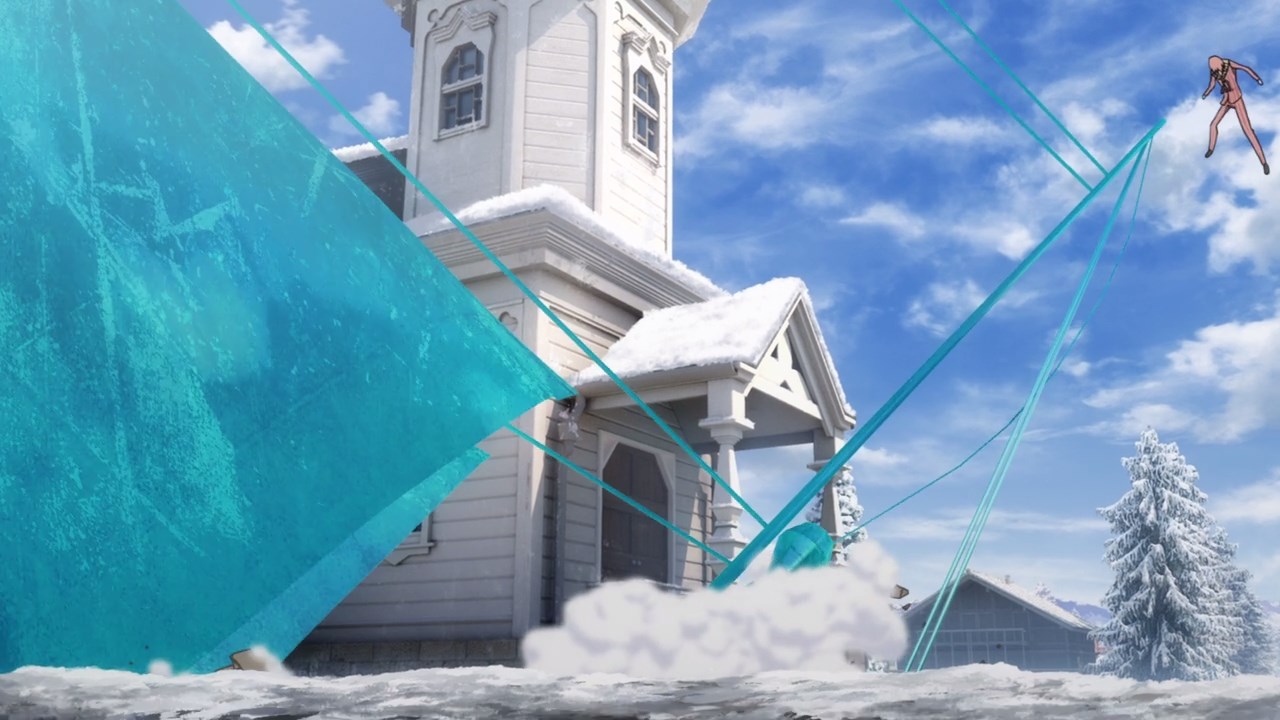 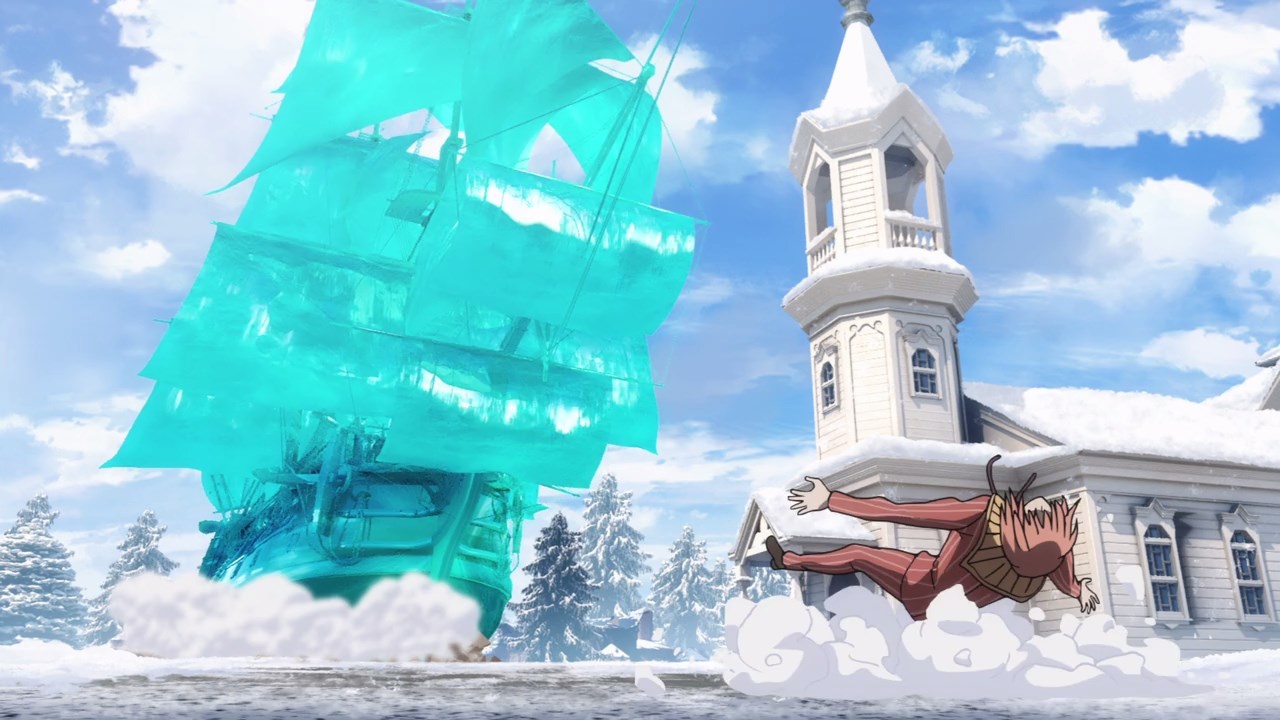 …but Vento brought a massive ship called La Regina del Mare Adriatico as a battering ram. It’s super-effective towards Fiamma of the Right, but not enough to kill him. 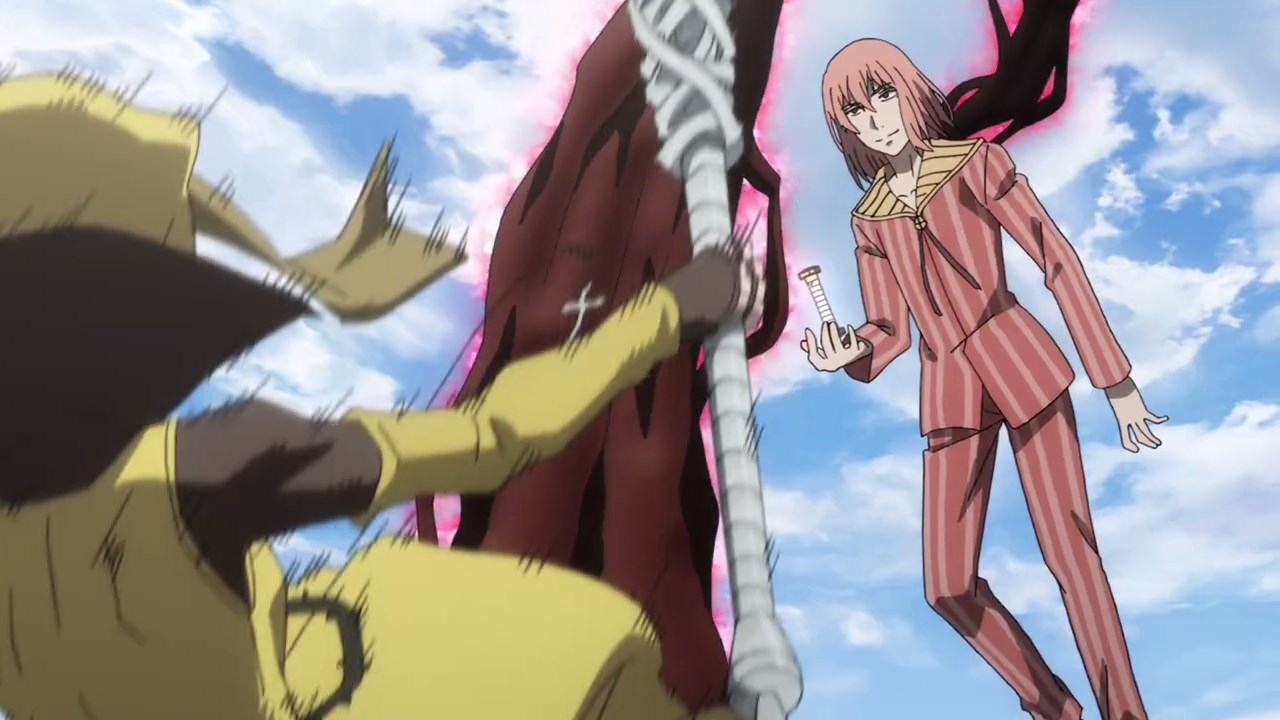 Anyways, Fiamma shows Vento that he’s the strongest member of God’s Right Seat. And to prove that he’s the best, Fiamma not only slams Vento to the ground… 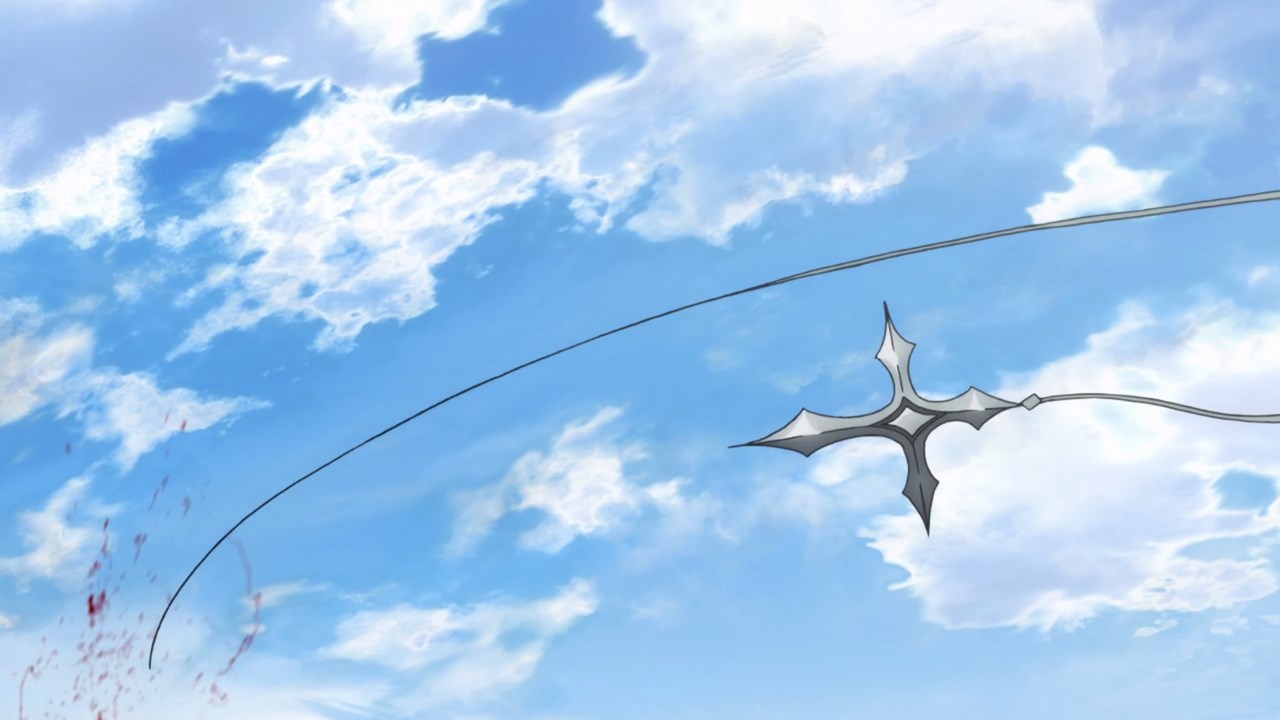 …but also yanked her cross that tied to her tongue. And yes, it’s gonna hurt much! 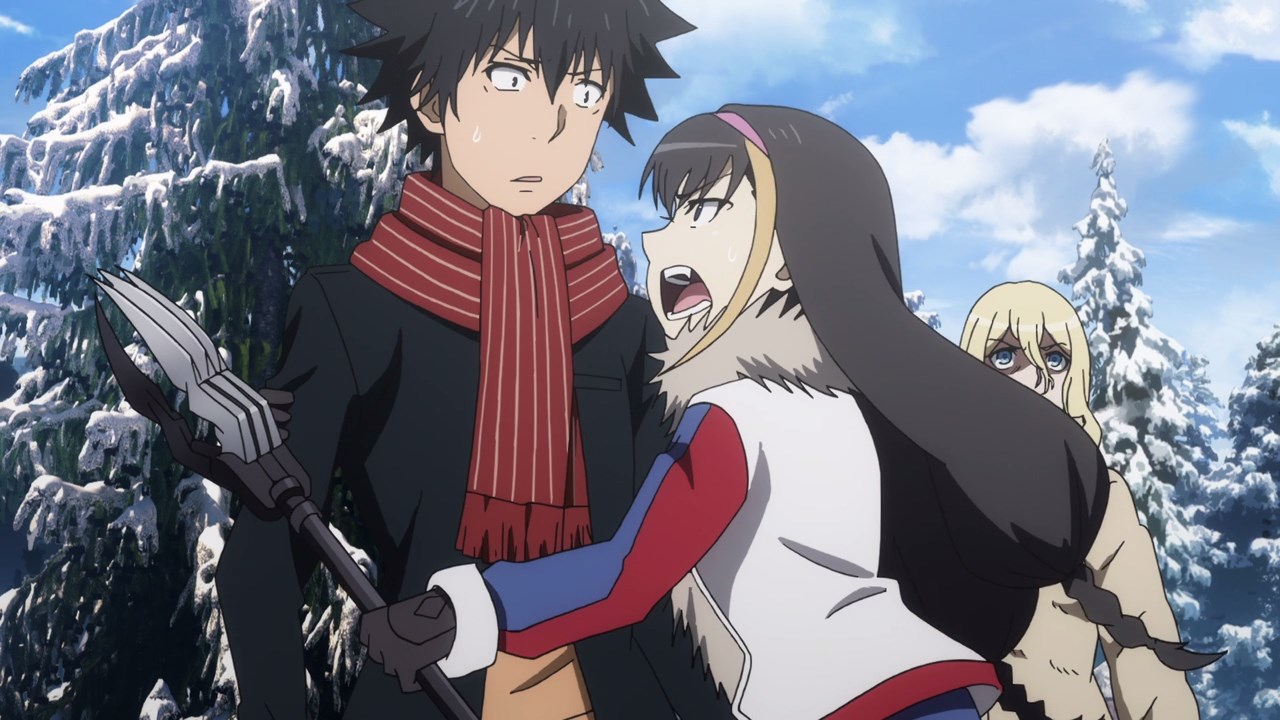 For Touma Kamijou, that’s the last straw for Fiamma of the Right as Touma wants to punch this bastard to face, only for Lessar to stop Kamijou because Fiamma is targeting his right hand. 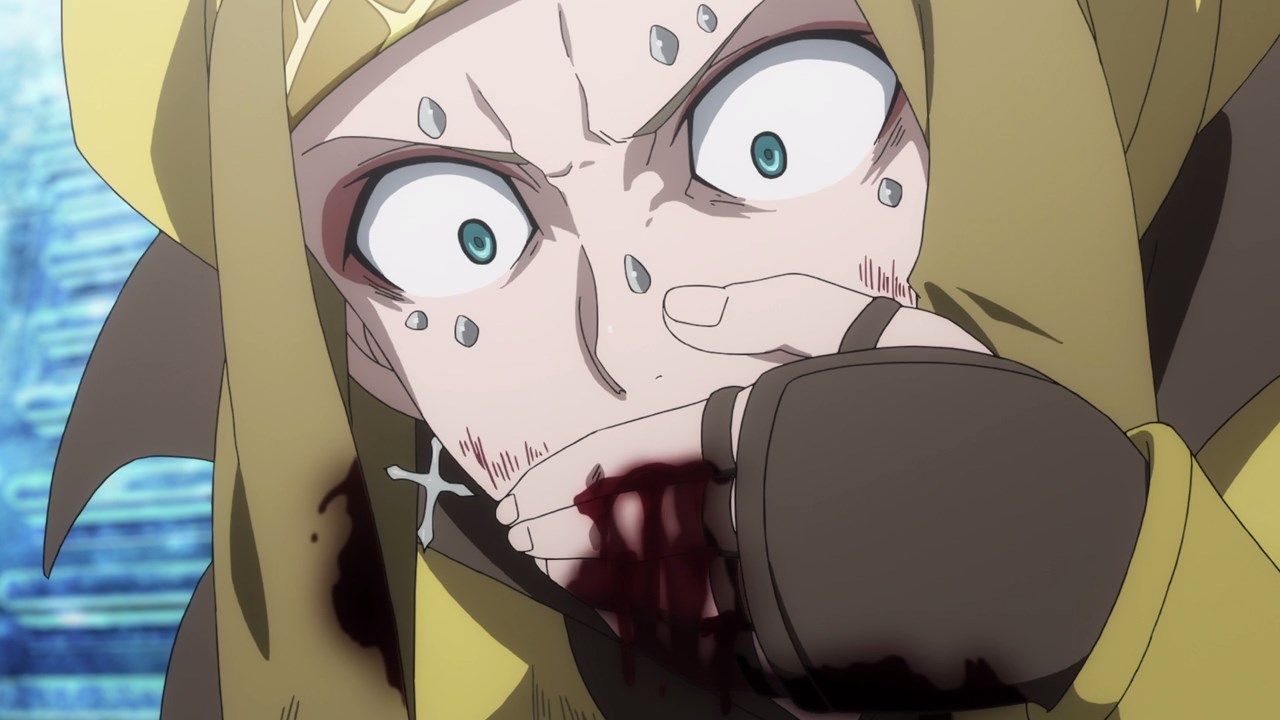 But speaking of Vento of the Front, she’s alive but her tongue hurts so much. At this point, they can’t do anything to defeat Fiamma of the Right. 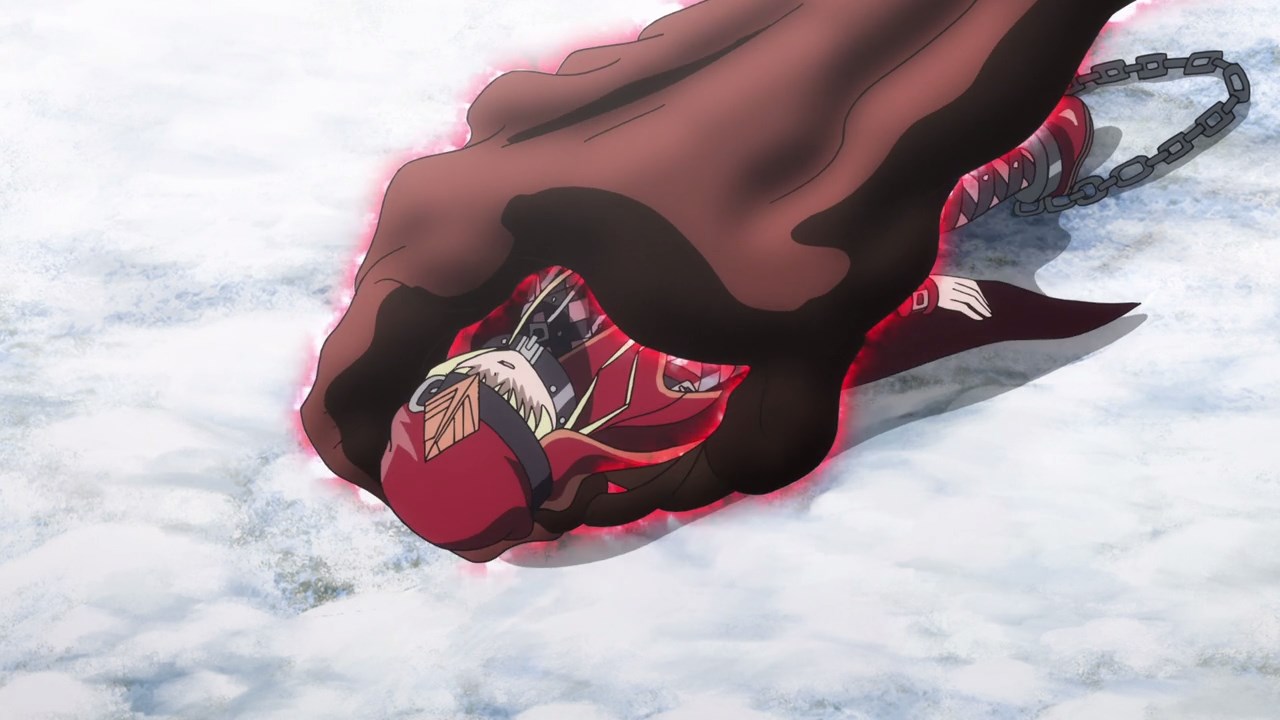 For now, they’ll just sit there and do nothing as Fiamma takes Sasha Kruezhev for his grand scheme. 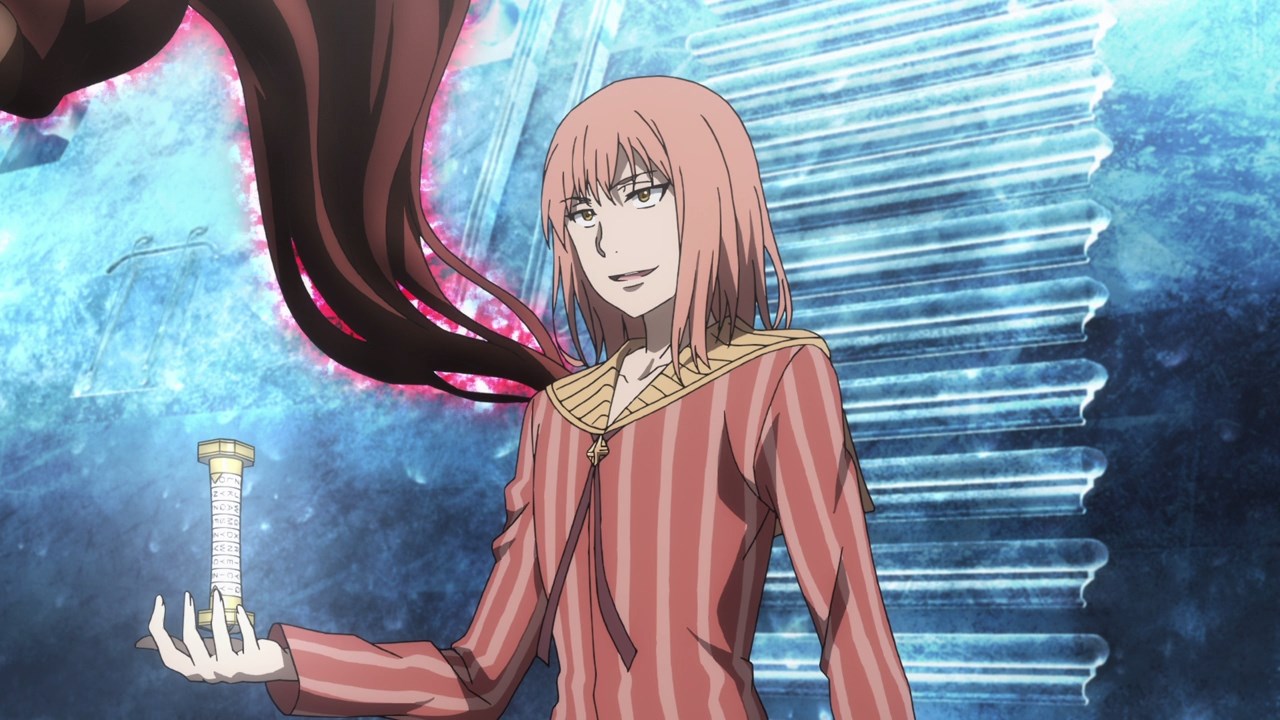 Of course, he’ll return to take Touma’s Imagine Breaker because Fiamma needs his right hand, aside from Index’s grimoire, for turning the world into chaos.

Man, I wish Touma became Saitama and one-punch this guy much like how Kamijou smashed Princess Carissa’s face back in Great Britain. 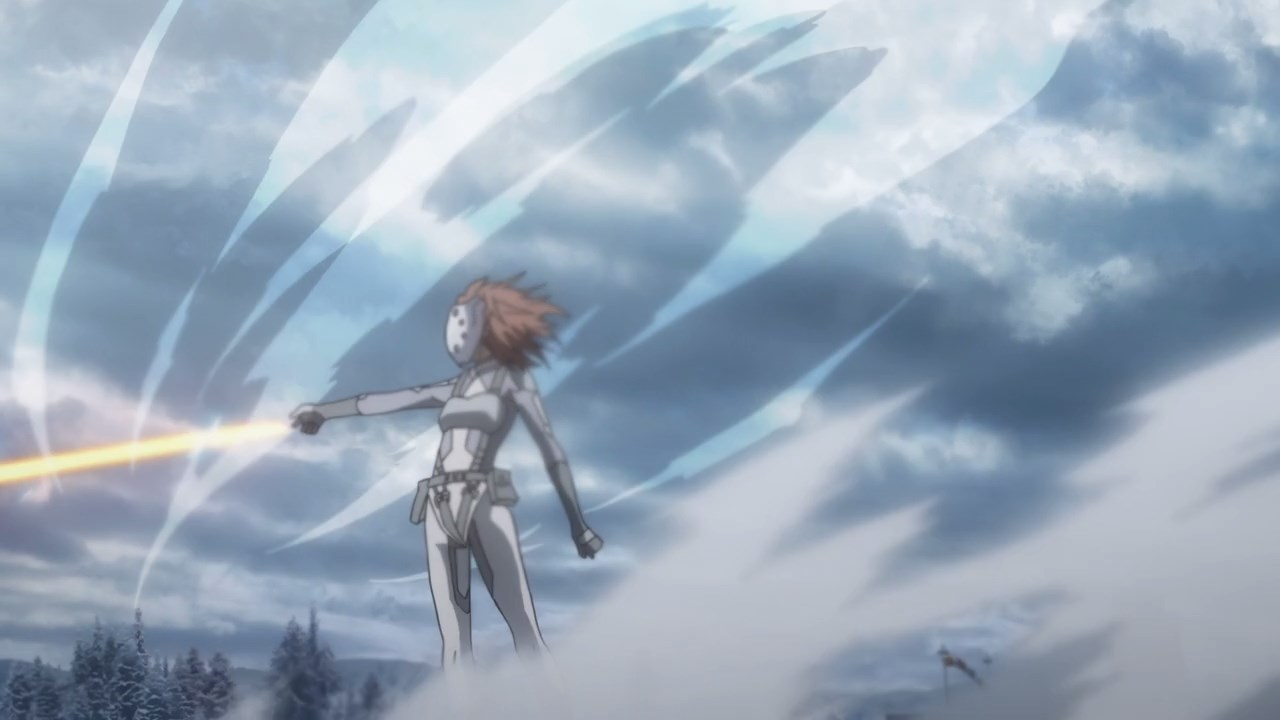 Meanwhile, let’s go back to Accelerator where he’s being chased by one of the assassins sent from Academy City.

And aside from that hairstyle, this assassin is shooting nails by flicking them with her hand. Wait, I have a bad feeling about this! 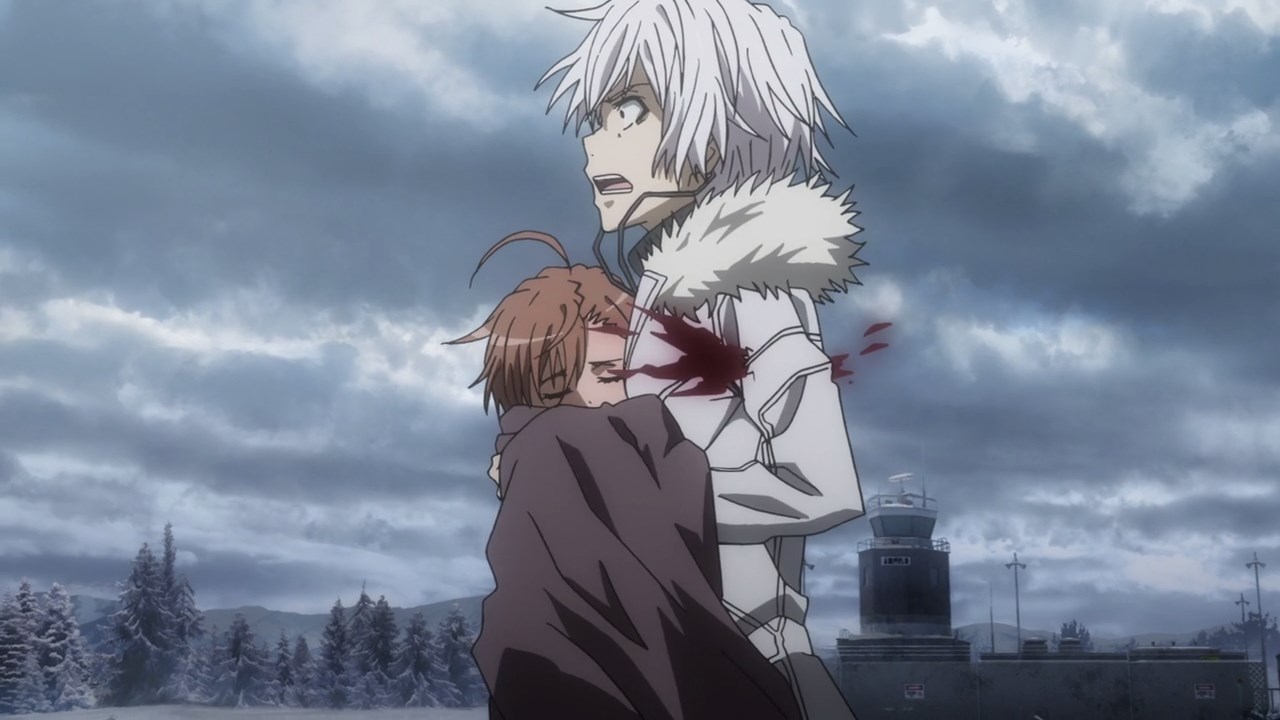 In any case, Accelerator can’t fight right now as he’s currently saving Last Order’s life, but he’s getting punctured because of its railgun-like attacks. You know what, this is getting annoying! 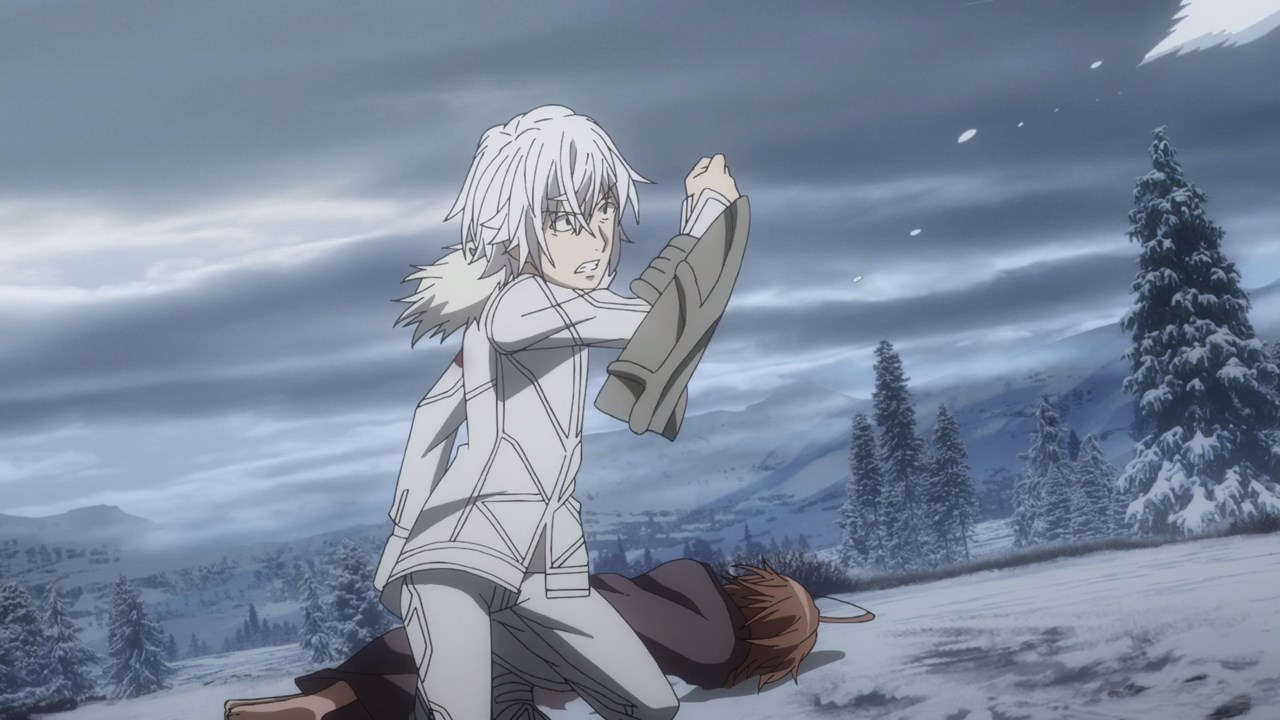 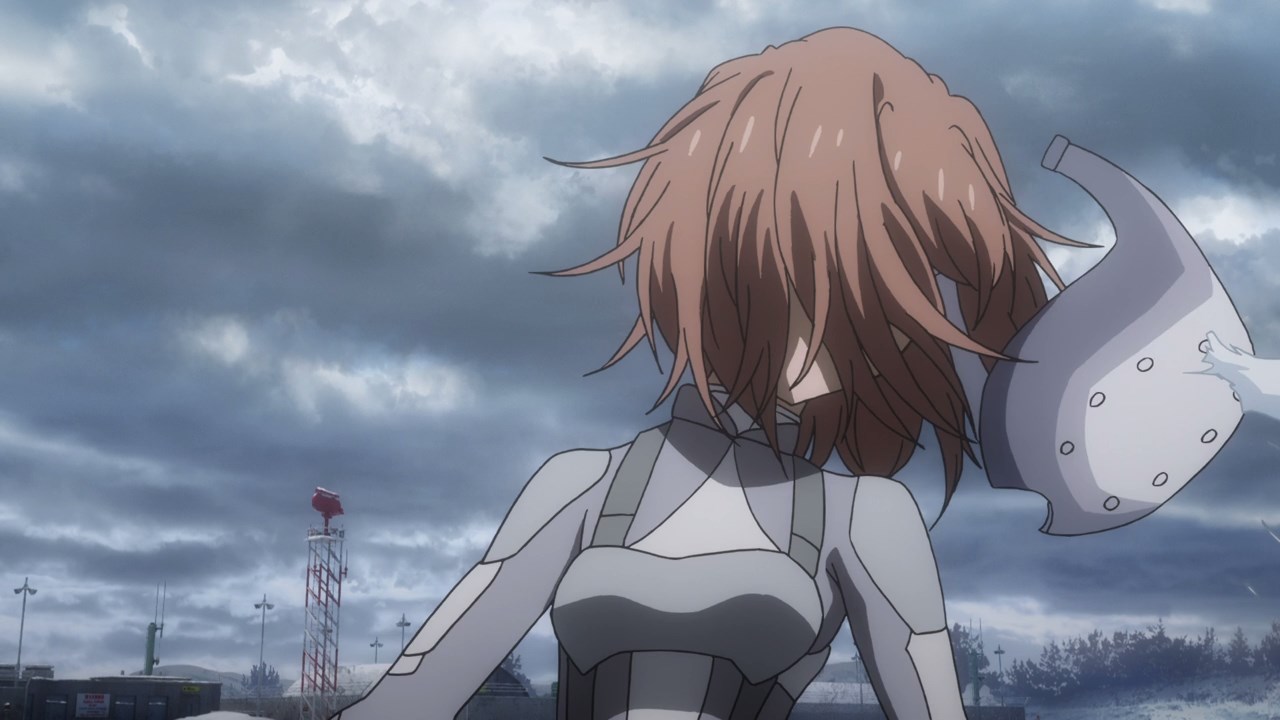 So, Accelerator throw a snowball at this assassin which took out her mask. And this is the part where she revealed herself towards Accelerator and why she’s here to assassinate him. 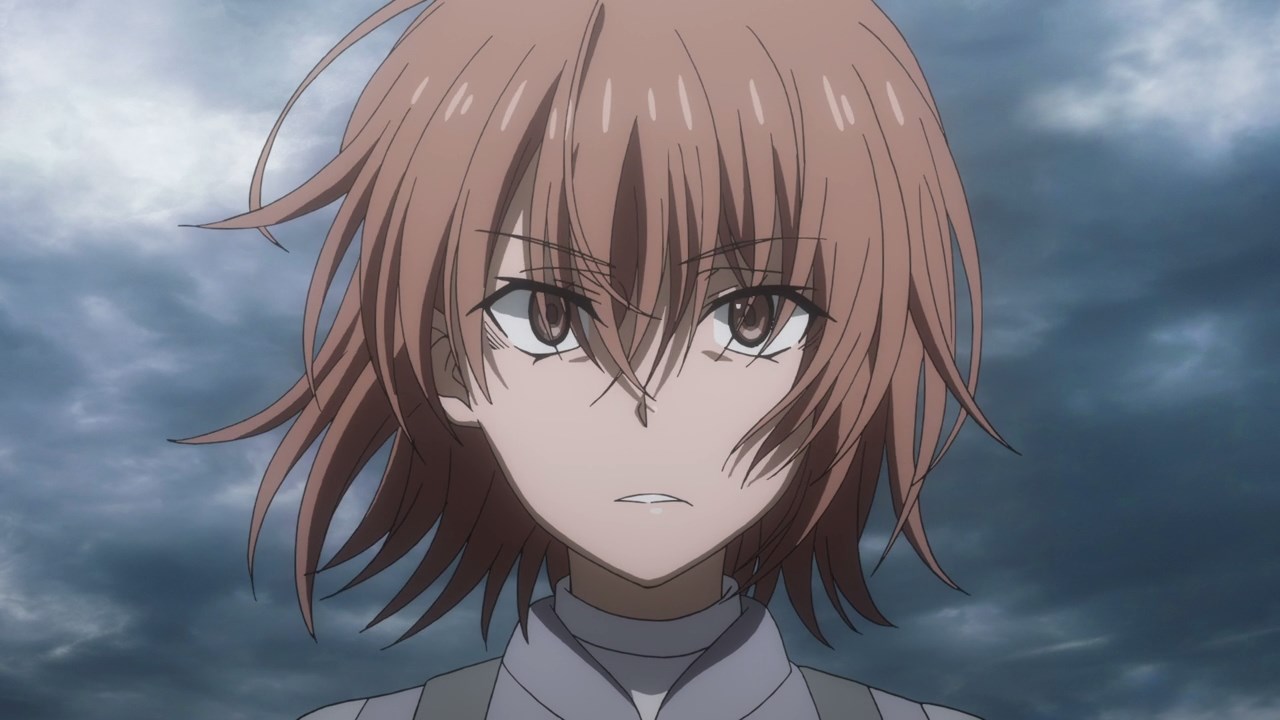 For you see, this is the true face of the assassin, which resembled Mikoto Misaka. It’s no wonder why she has that railgun attack.

In fact, she calls herself as MISAKA Worst where Academy City’s malevolent scientists started making Misaka clones again, but repurposed for killing both Accelerator and Last Order instead of being killed by the former to reach Level 6. 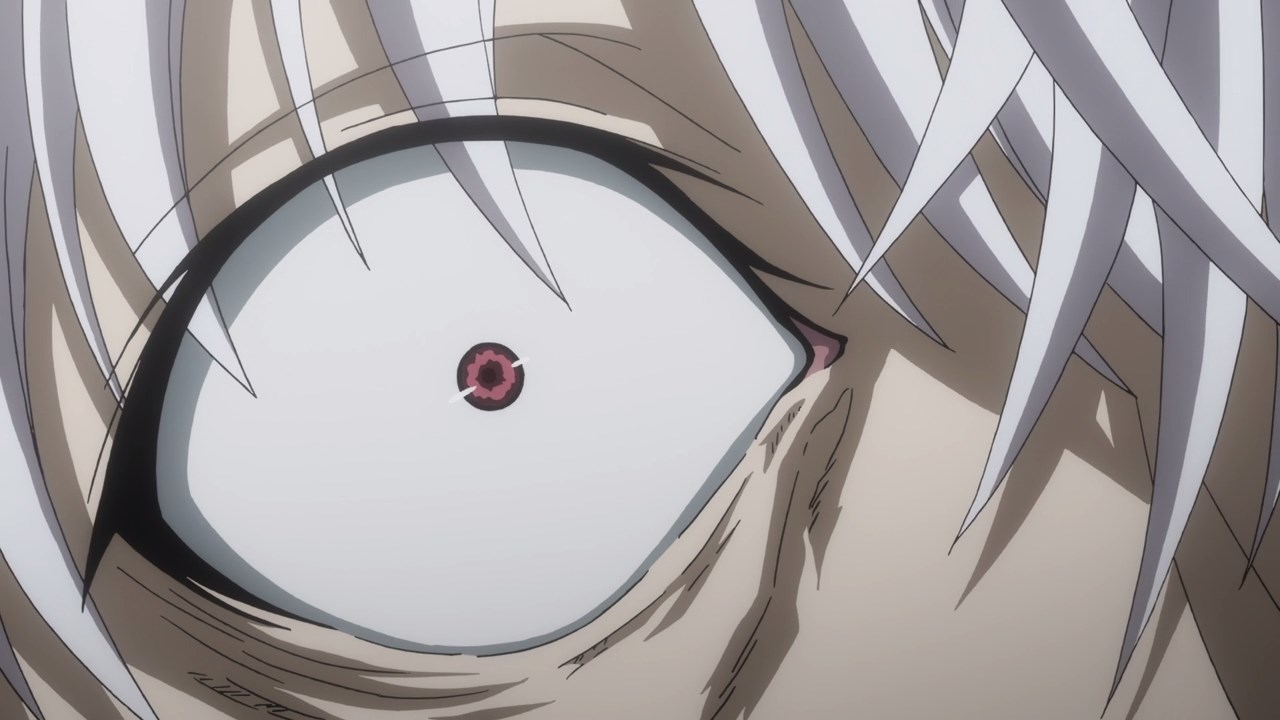 And speaking of Accelerator, he sure got a rude awakening as he previously killed every MISAKA sisters before Touma Kamijou punched him in the face.

Yes, he vowed not to kill the MISAKA sisters again after meeting Last Order, and therefore Accelerator can’t bring himself to kill MISAKA Worst despite her intentions to assassinate him and Last Order. 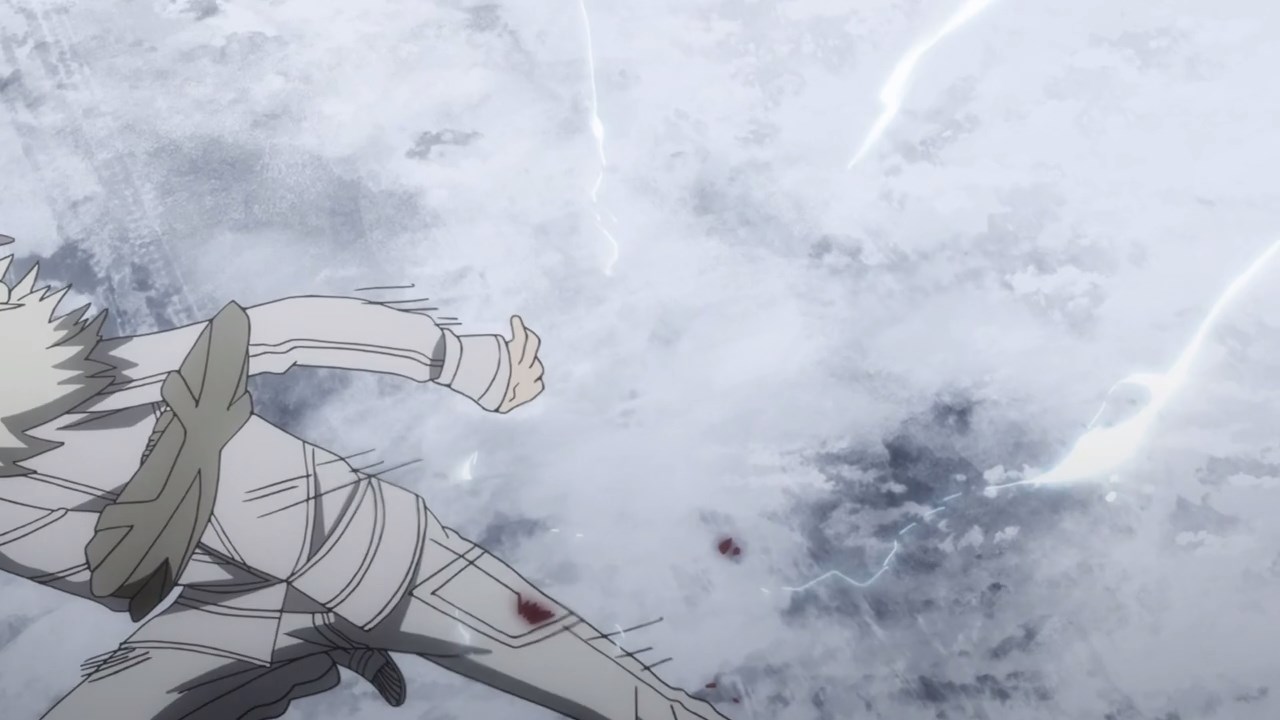 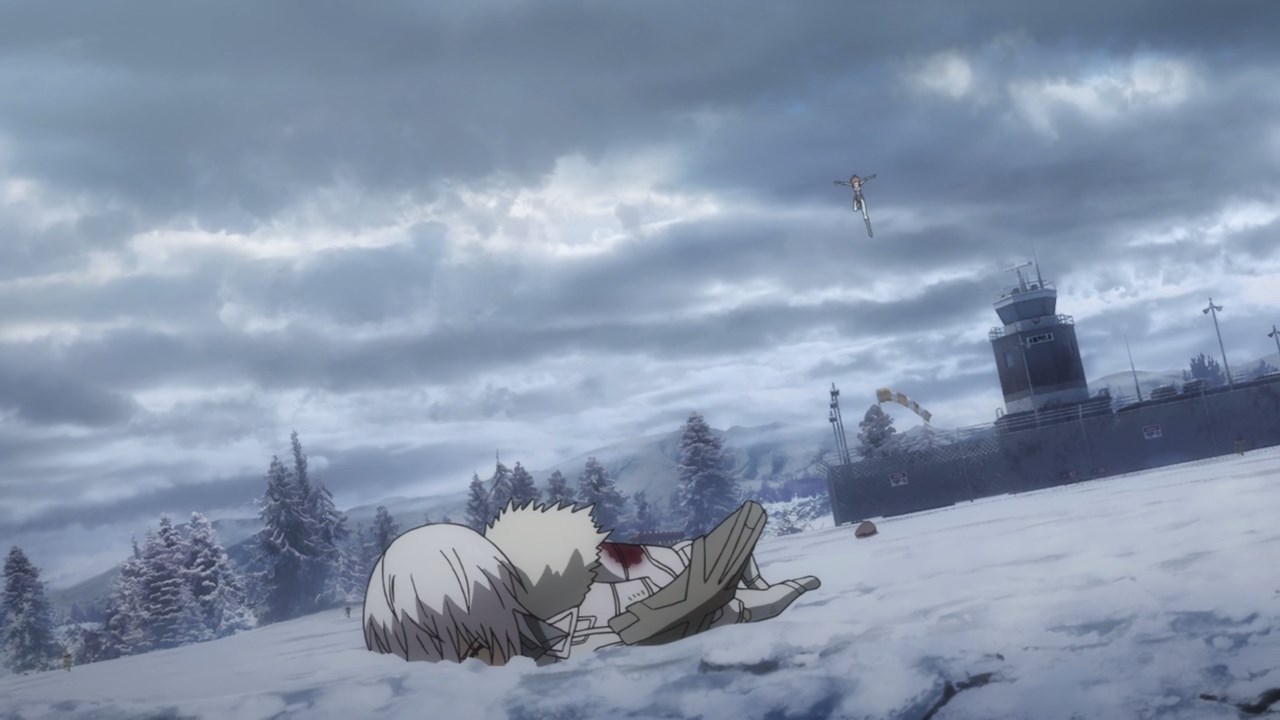 But anyways, Accelerator can’t do anything but to act like a punching bag to MISAKA Worst. At this point, he’s gonna die in Russia. 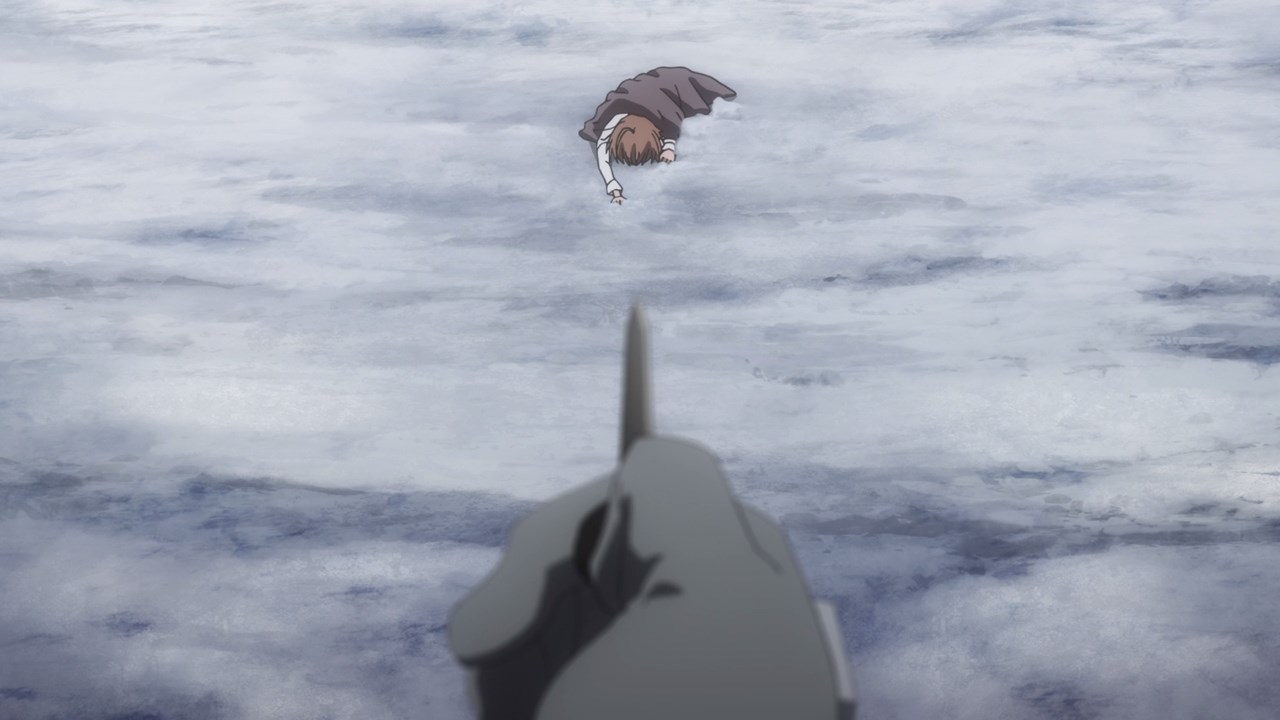 Oh, and Last Order too because MISAKA Worst is not being tied to the network, meaning that she won’t receive a shutdown order from Last Order.

Then again, Last Order is too weak to order her sisters to shut MISAKA Worst down. 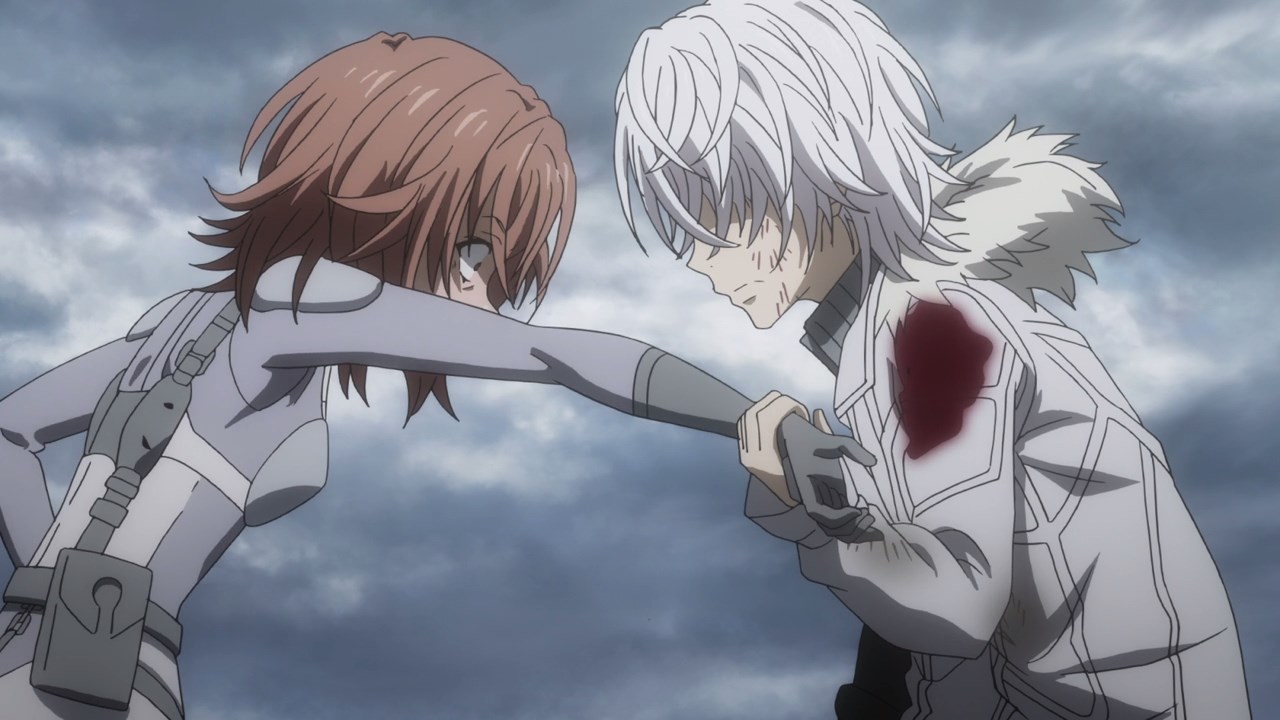 But speaking of Last Order, Accelerator doesn’t want ANYONE lay a finger at her as he broke MISAKA Worst’s right arn until she can’t use it anymore. 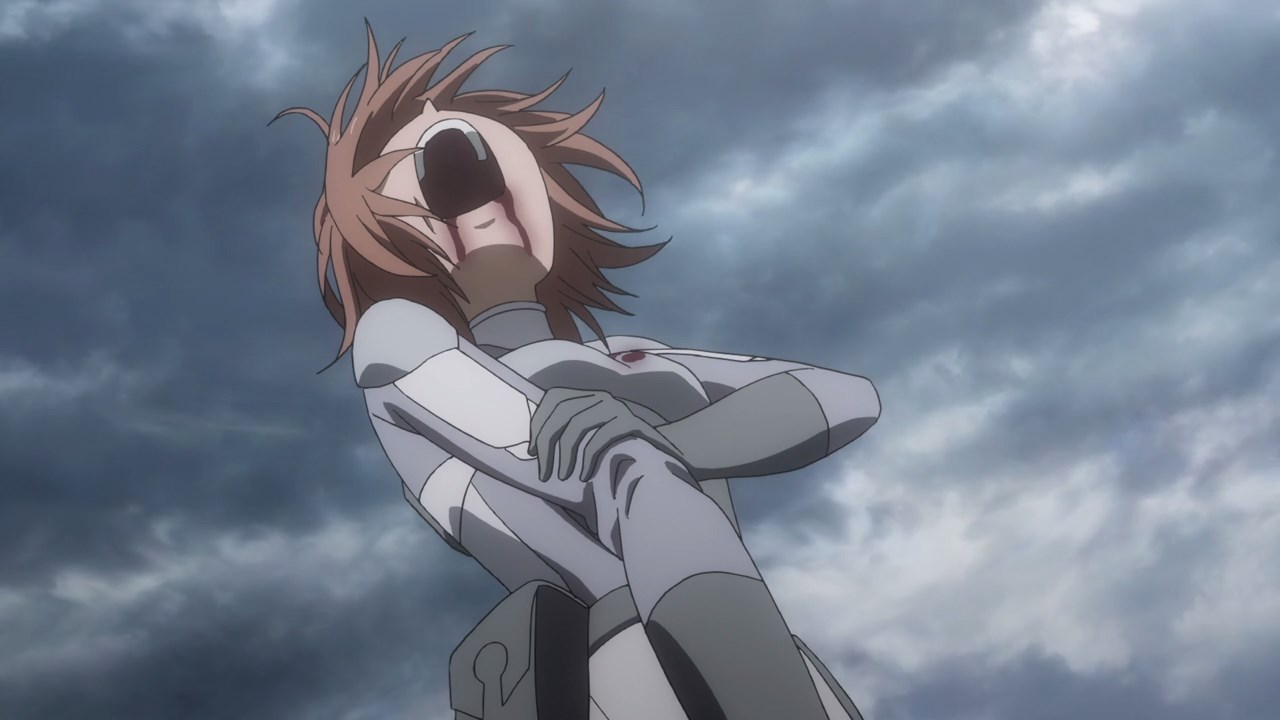 So yeah, this serves as a warning for those who want to hurt Last Order and MISAKA Worst paid for her mistake. 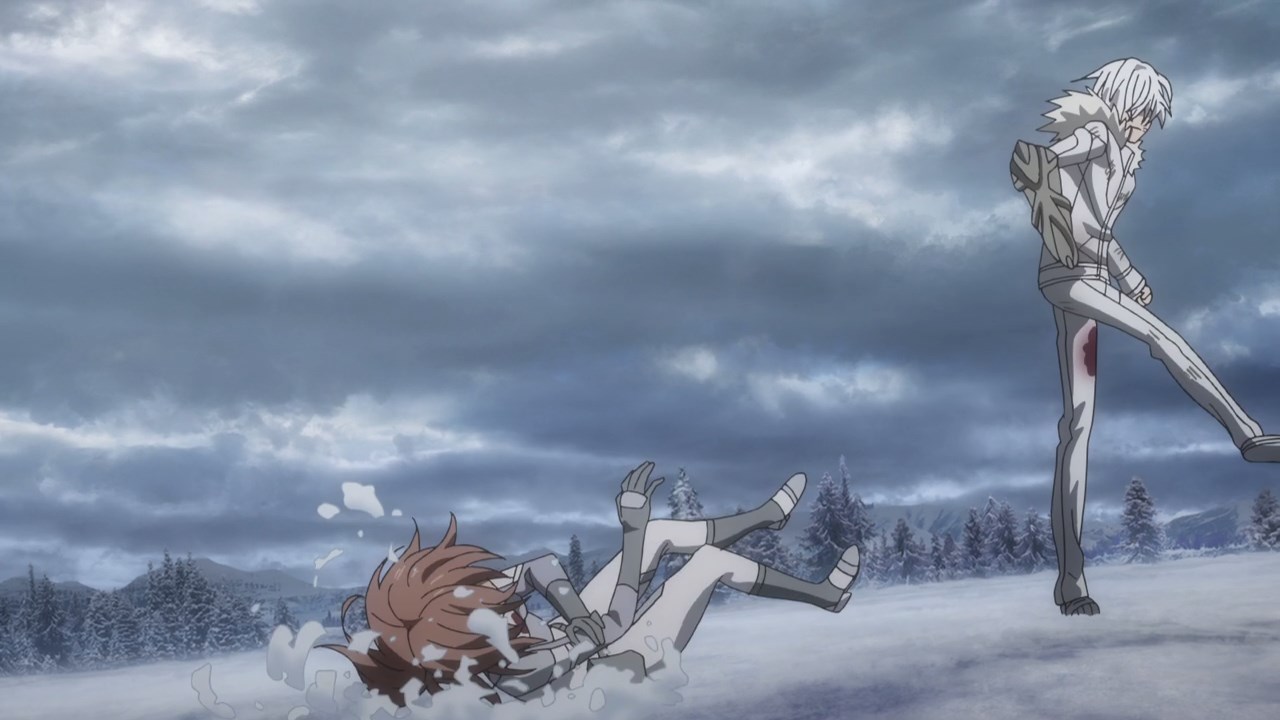 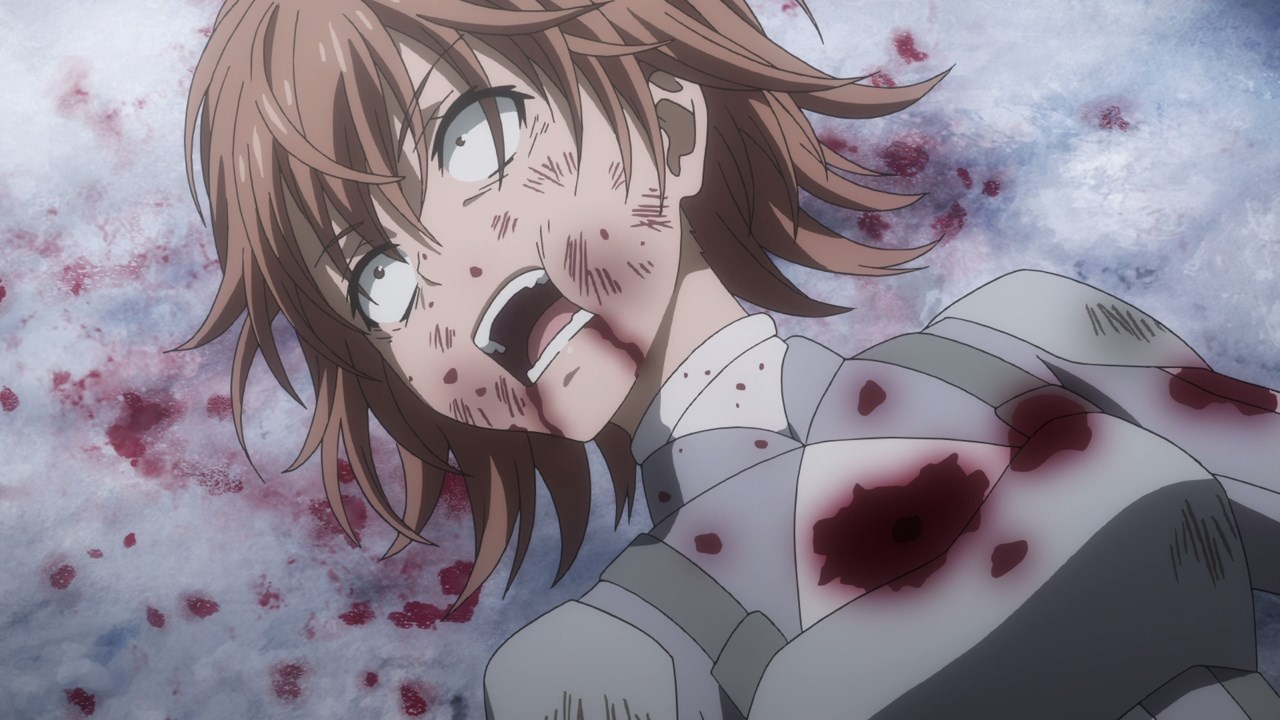 Then again, MISAKA Worst is in a worst state where she’s losing blood and she’s about to die. Gotta say that Accelerator went too far on defeating her. 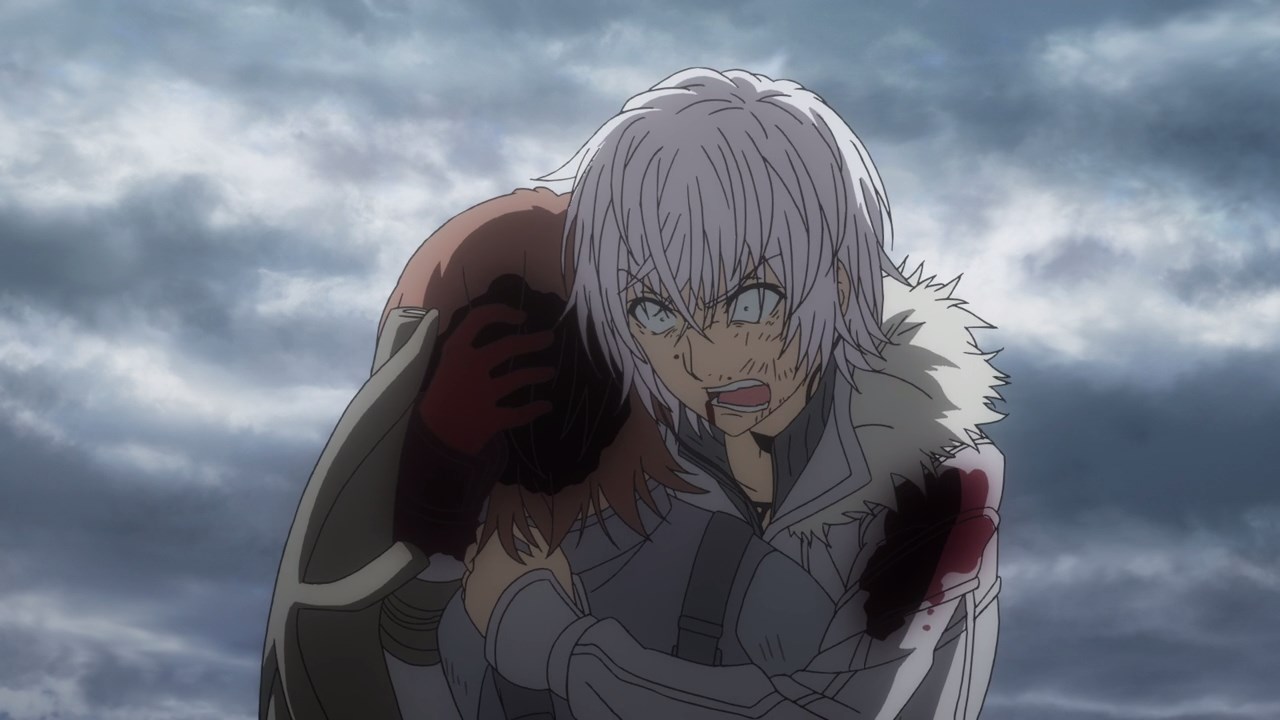 Anyways, that’s about it for this episode of Index III and really, the three heroes are in a predicament right now. While I complain about Fiamma being OP as fuck, the most interesting that happened on this episode was MISAKA Worst’s appearance where she’s a cross between Mikoto Misaka’s appearance mixed with Accelerator’s sadistic attitude. Then again, I’m worried about Accelerator and his attempts of saving both Last Order and MISAKA Worst with little time left.

With that said, I’ll see you next time as the series is getting closer to the finish line!