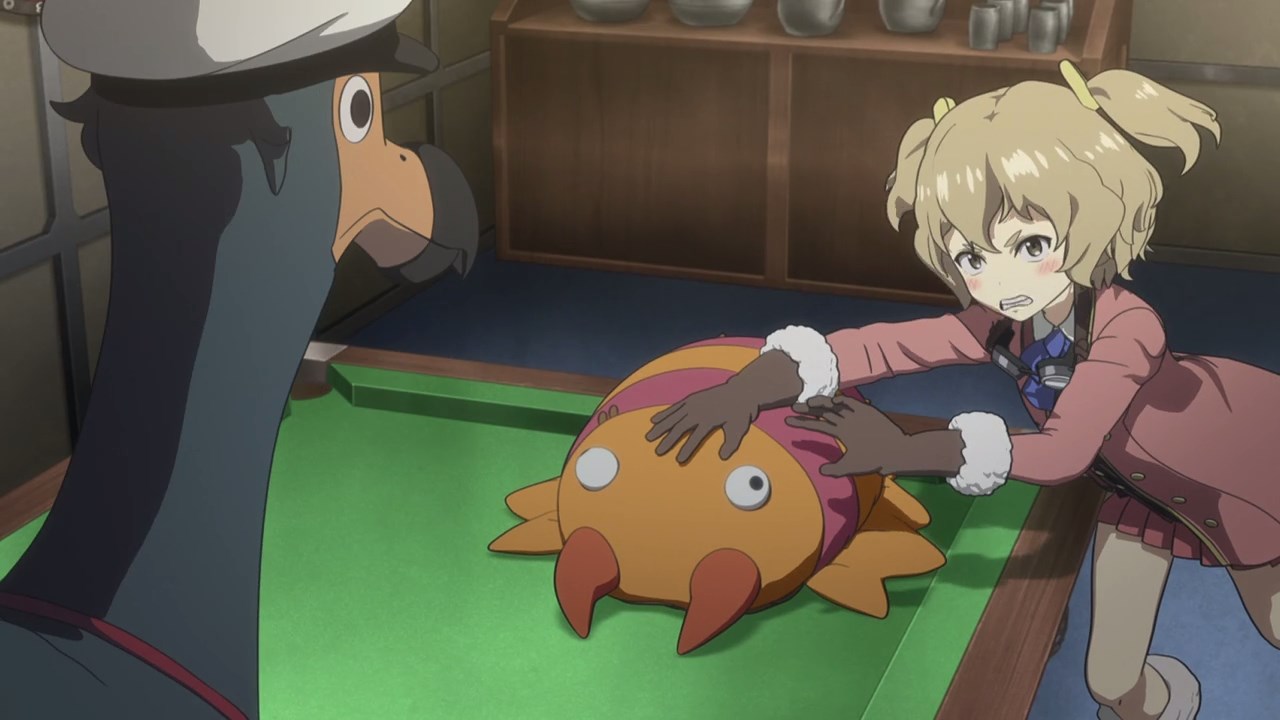 On this episode, it seems that Chika is confronting Kotobuki Squadron’s mascot dodo bird named Captain Dodo, who she feared that her pet anomalocaris Malo is being threatened by that bird. 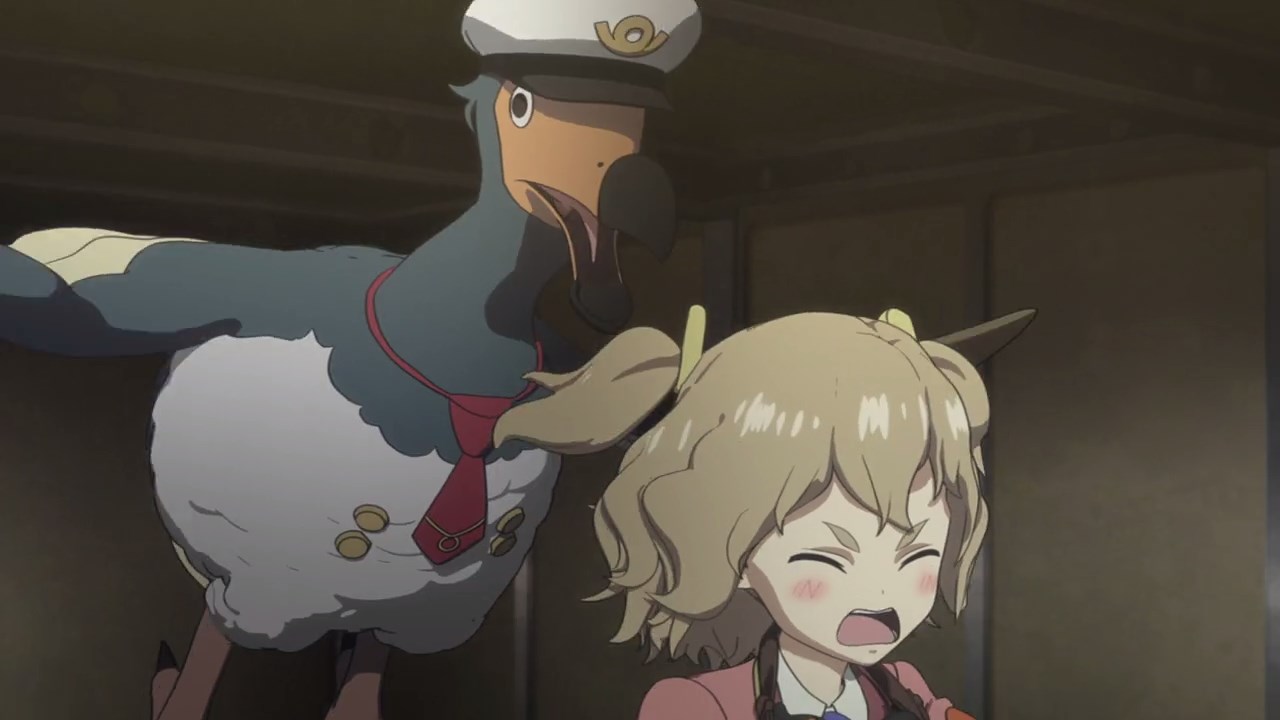 However, Captain Dodo doesn’t care for what Chika says as it tries to peck her. Well Chika, you shouldn’t mess with Captain Dodo! 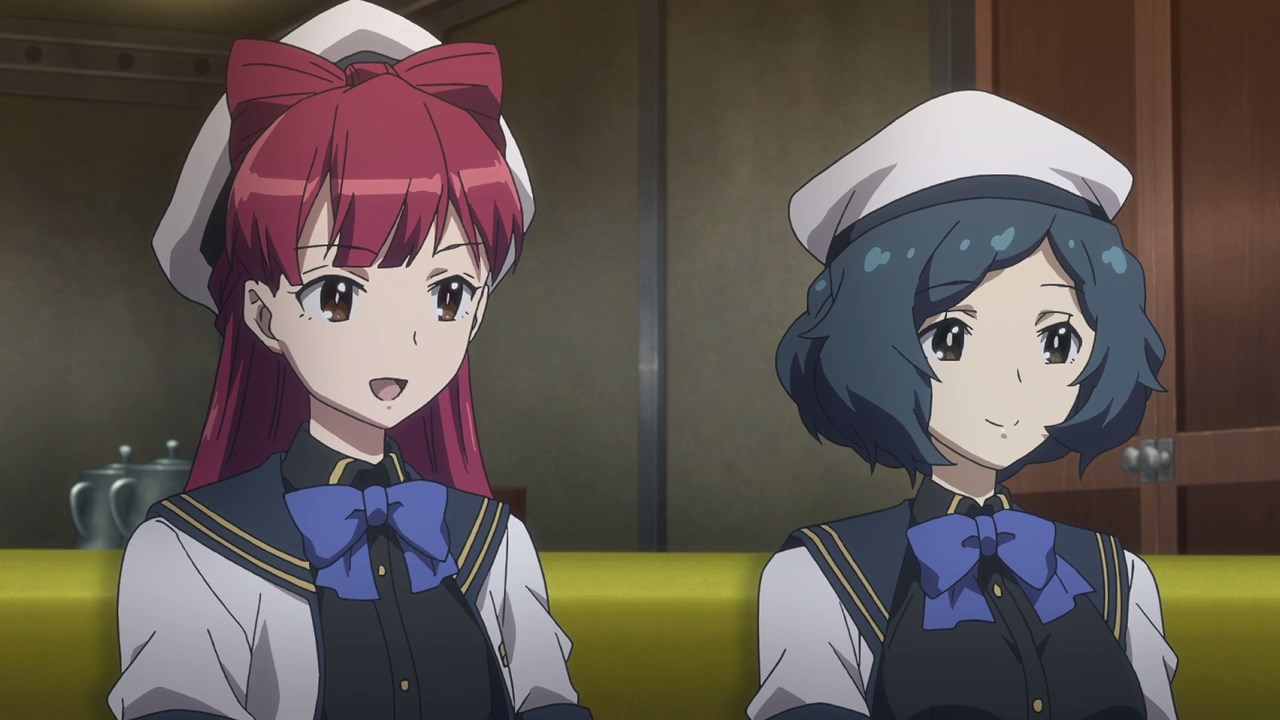 Now let’s move onto some new characters that we’re not properly introduced until this episode.

This is Anna and Maria, two officers who are always on the lookout in regards to the squadron’s well-being, especially Reona and her tenacious move that almost got her killed. 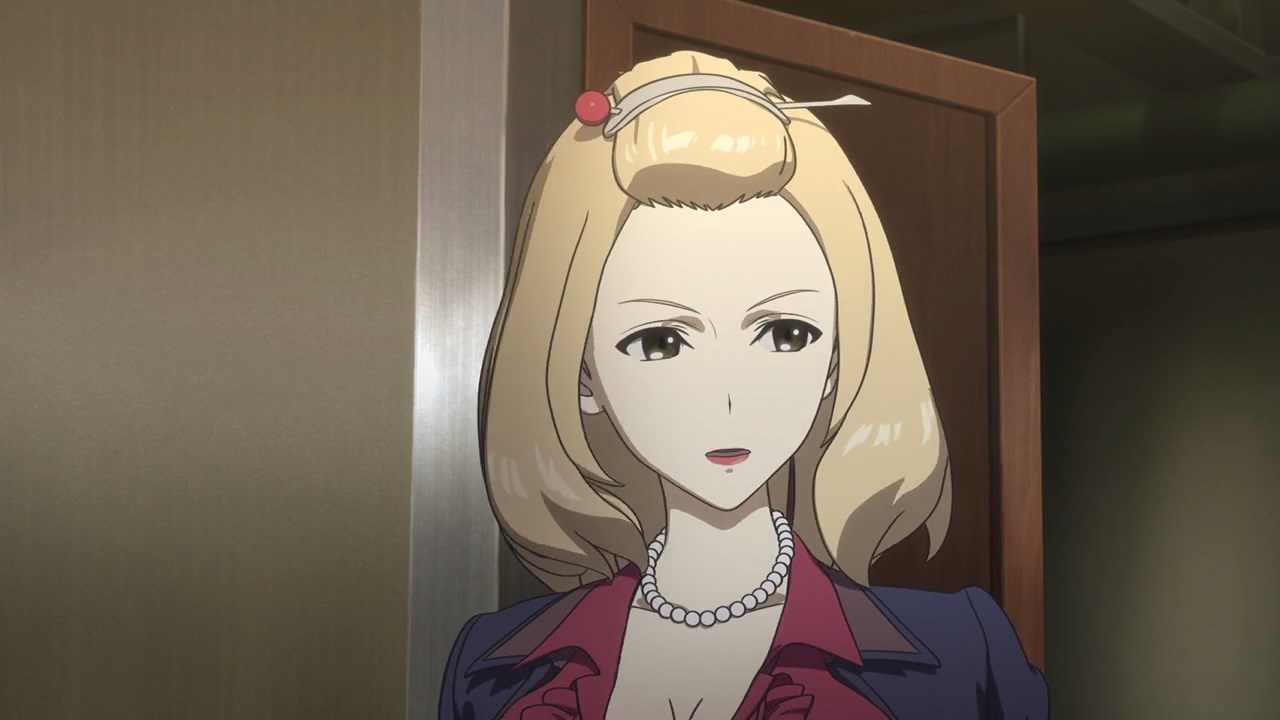 Heck, even Madam Lulu is worried that the squadron could crumble should its leader got shot down in action. And really, find a good squadron leader is very expensive, which is why Reona wants to make up with her mistakes by paying them various favors. 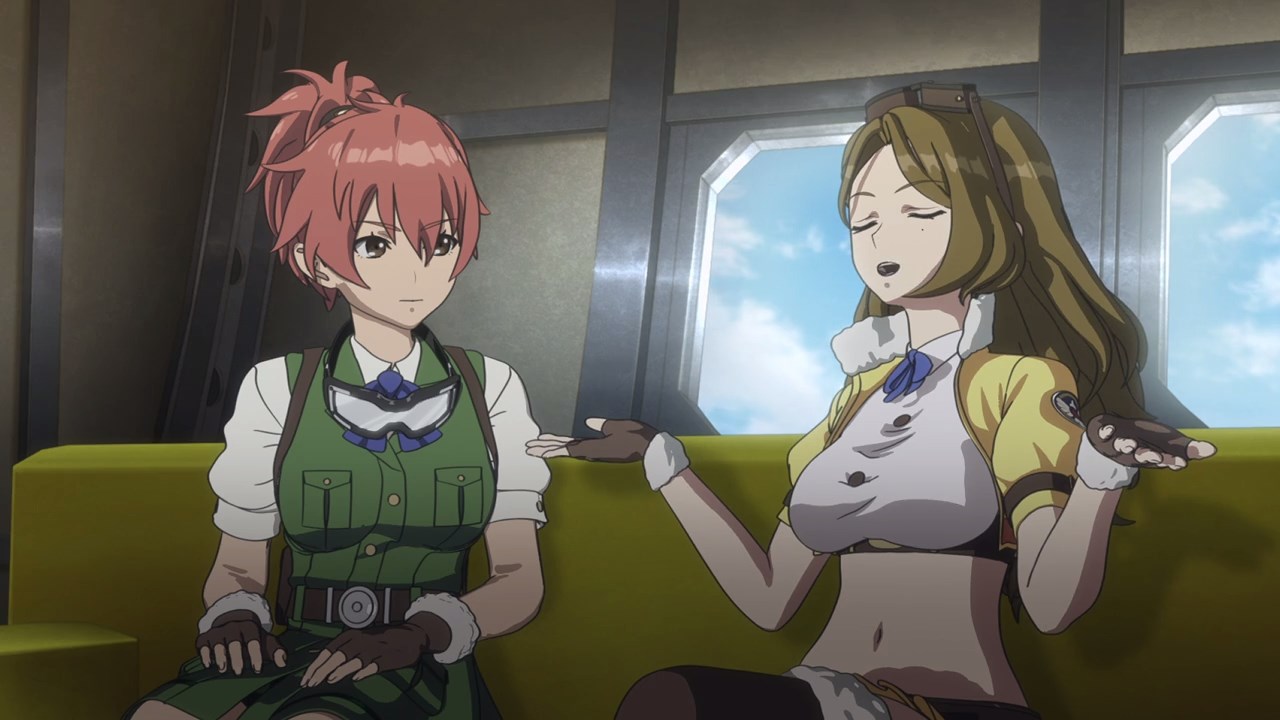 But seriously, Reona doesn’t need to be indebted by anyone because she and the rest are a team. Even Zara told her to believe in her teammates more.

While it’s all good inside the airship, especially Kate as she’s still alive, where’s Kirie as I haven’t seen her around? 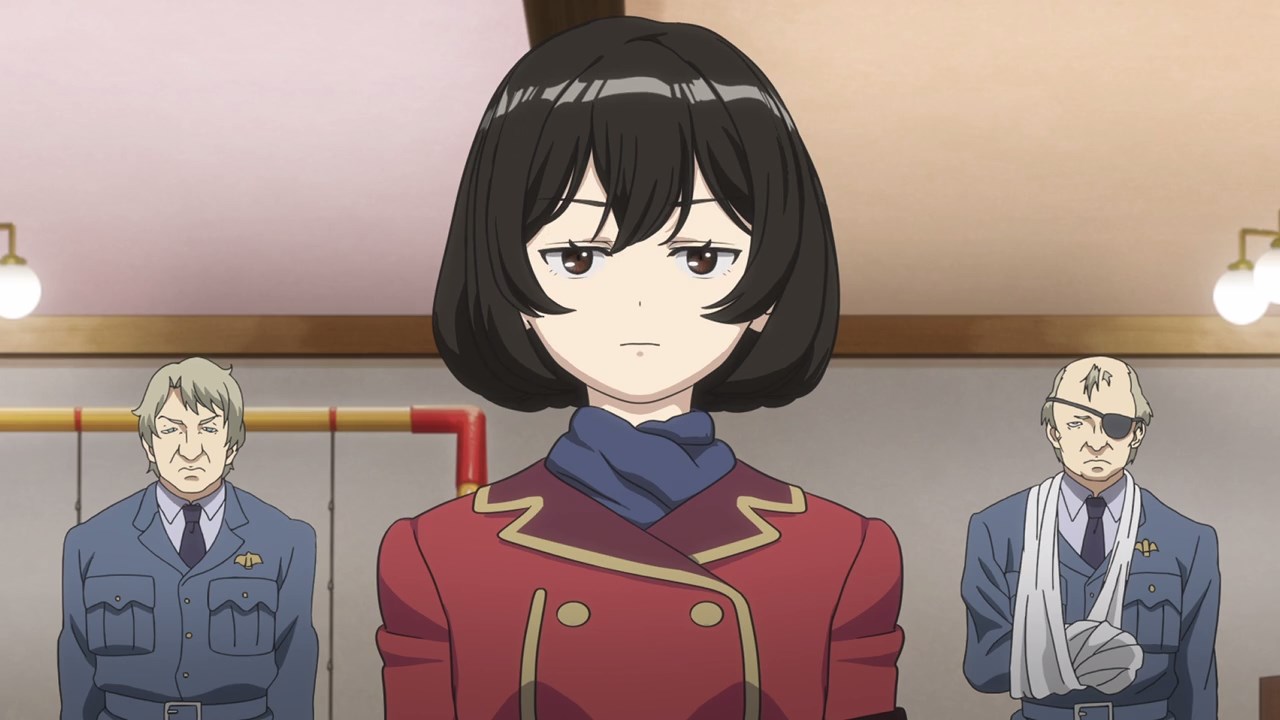 Oh, Kirie is at Coucilor Julia’s place where she’s here to collect their payment for their service. I mean, they did manage to protect both the councilor and Isao in the previous episode. 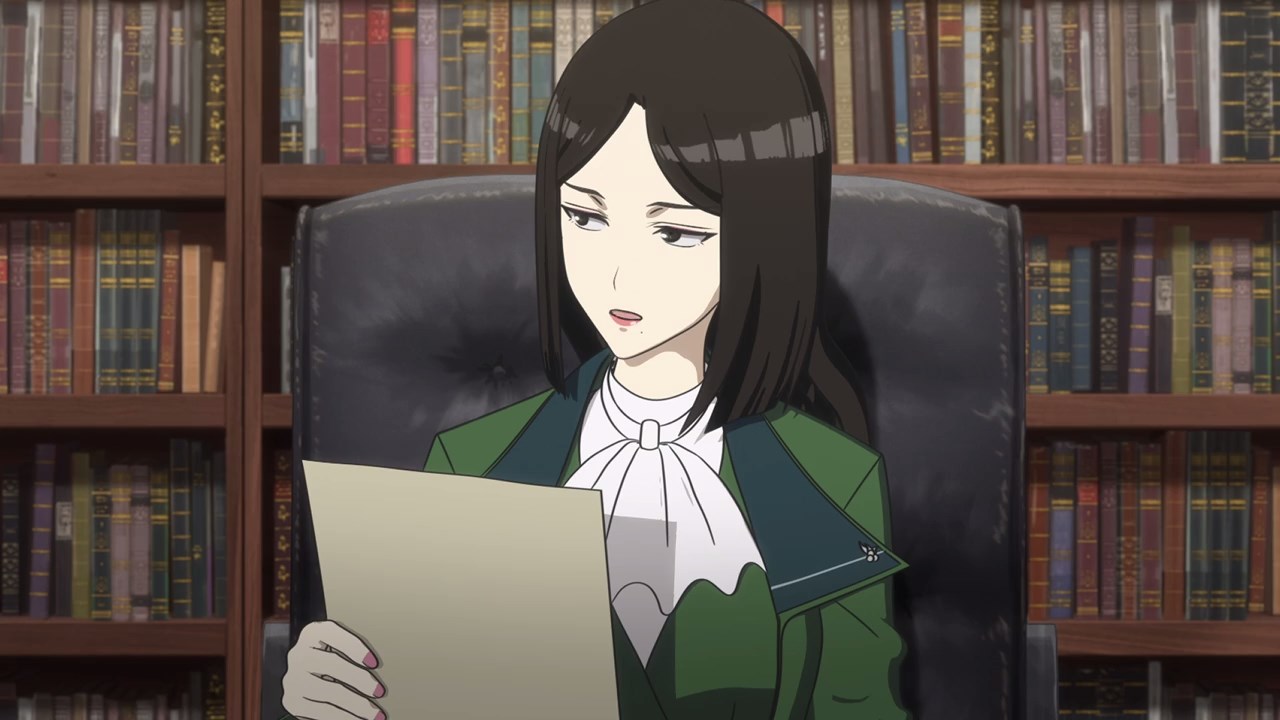 But speaking of Councilor Julia, she’s pretty mad that Isao takes the spotlight for defending Areshima, even though he and his butler screwed up in the end when Isao got carried away with his magic trick.

In any case, she’s gonna give Kirie the service fees, although Councilor Julia will reduce it if Madam Lulu comes to collect it. 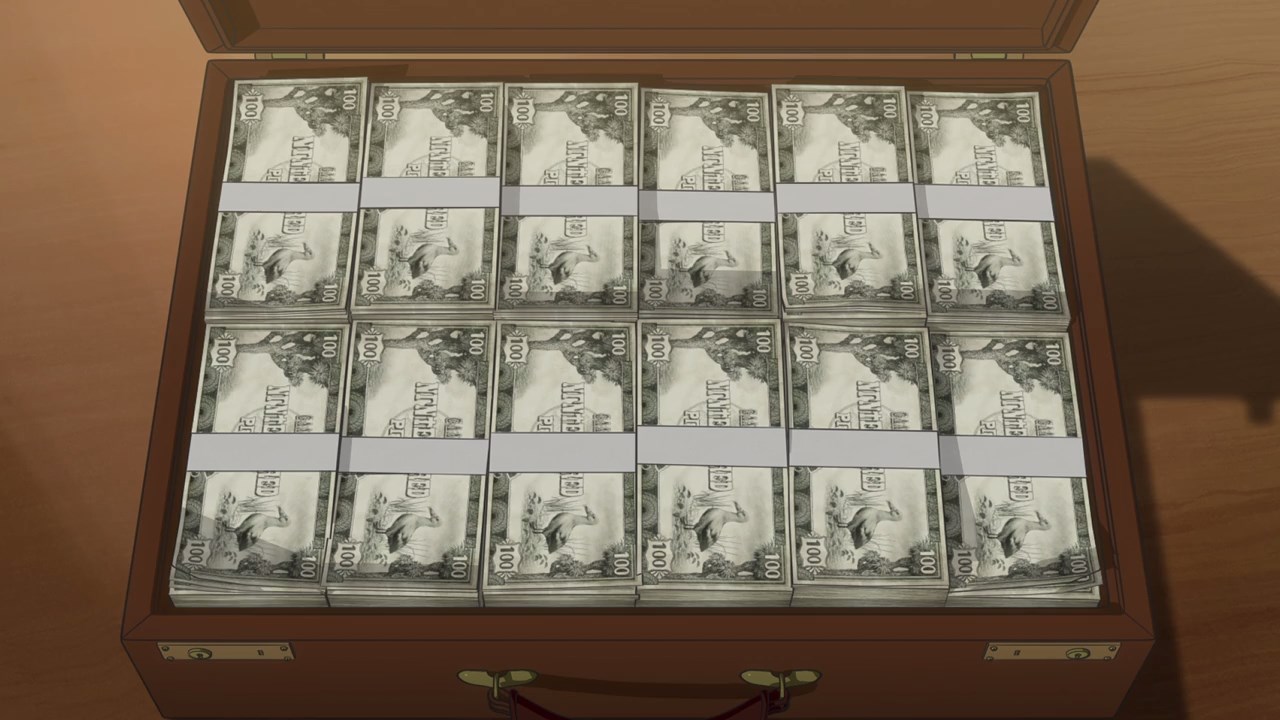 But hey, this reward is plenty to feed the squadron for a month. Glad that Councilor Julia didn’t become Aunt Scrooge or the Kotobuki Squadron won’t protect her again. After all, VIP protection comes at a price. 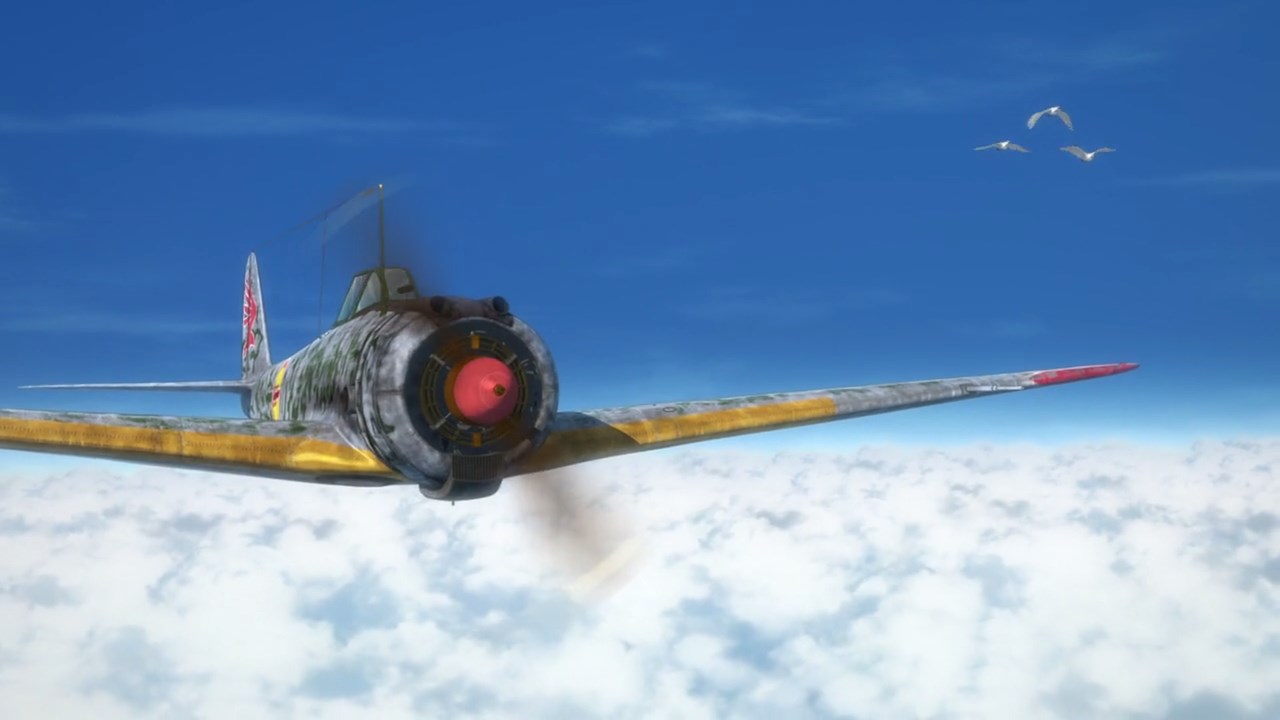 And so, Kirie took the money and went off towards the sunset. Then again, her teammates will shoot her down if Kirie deliberately stole the reward all by herself, so Kirie decides to head back to the airship instead. 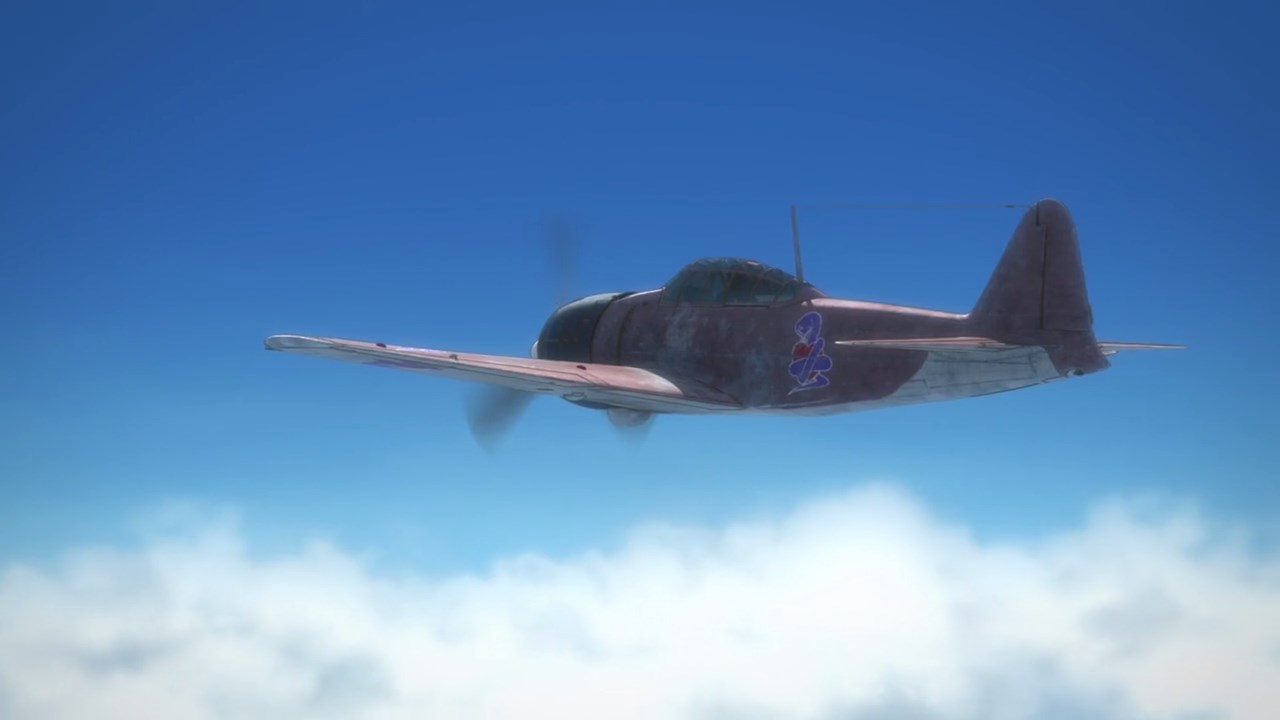 However, it appears that Kirie’s arch-nemesis have returned. You might remember this snake ignisia plane from the first episode where it shot Kirie’s plane until she was forced to retreat. 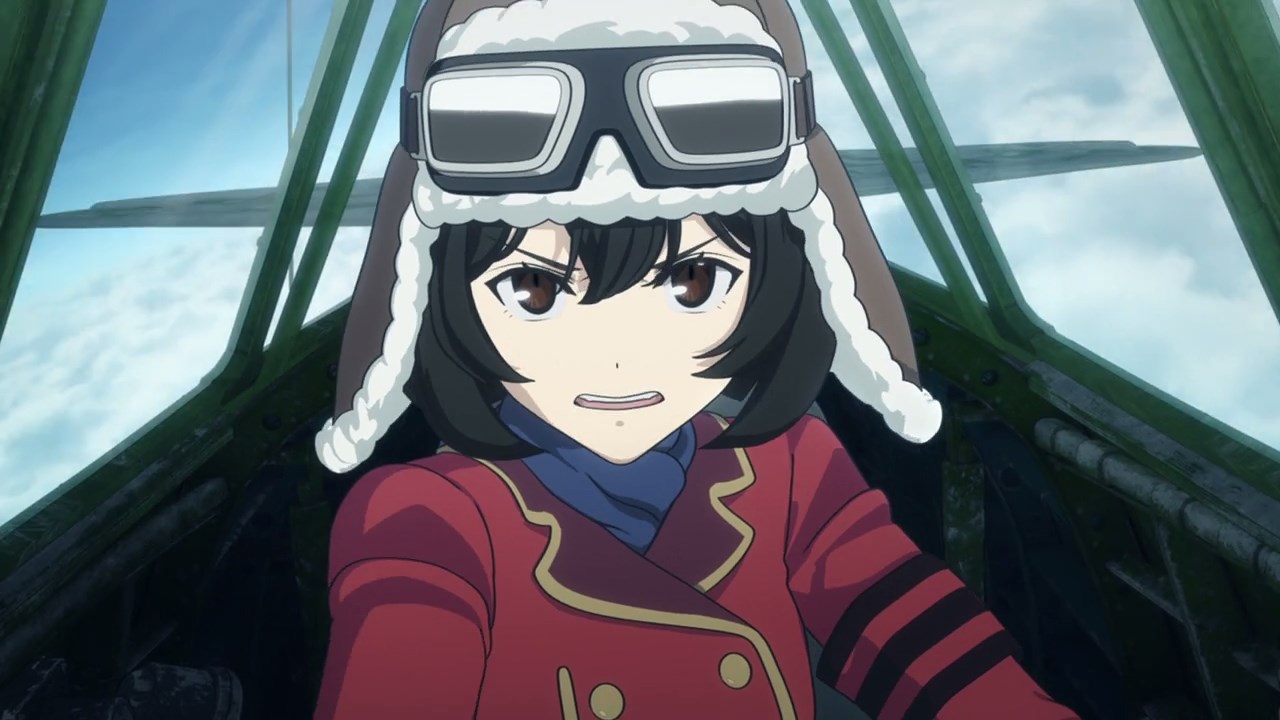 For Kirie, she won’t forget that humiliating loss. Um Kirie, I don’t think engaging with that plane is a good idea since you have a bag full of cash at hand and losing it away would be bad! 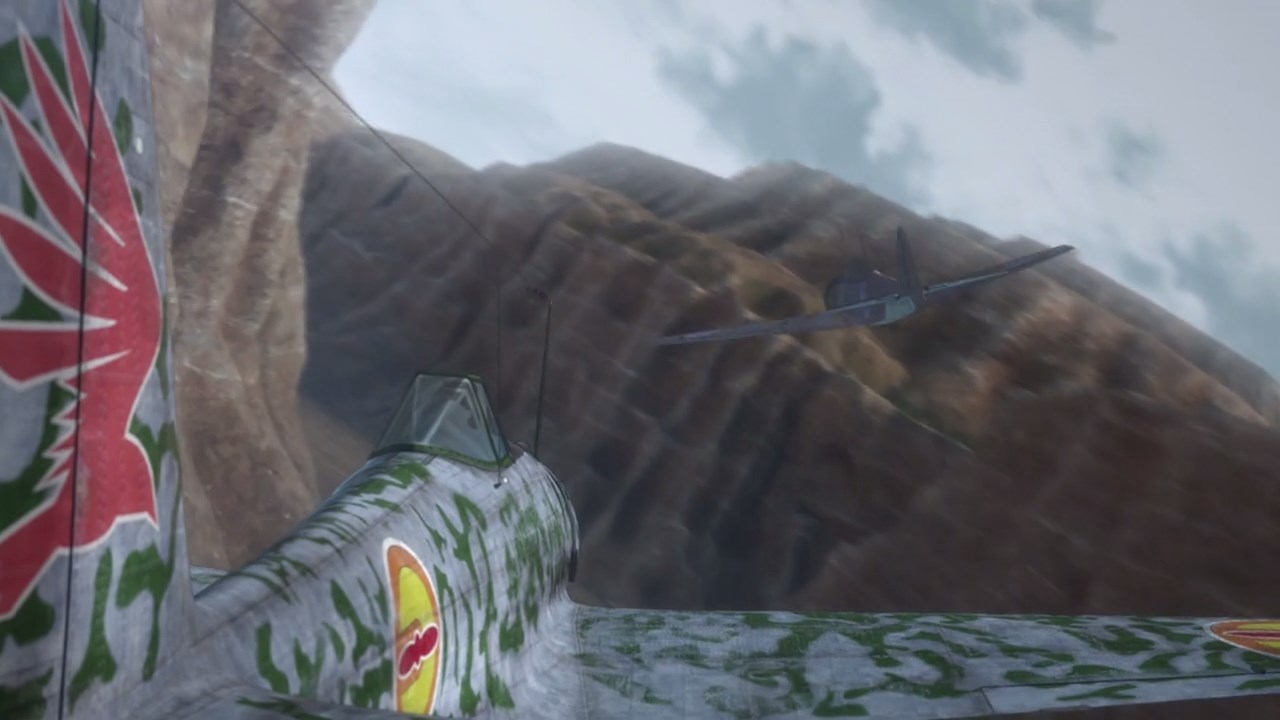 Still, Kirie is so stubborn that she decides to fight against the enemy away, even though the pilot didn’t fire any single shot towards Kirie. 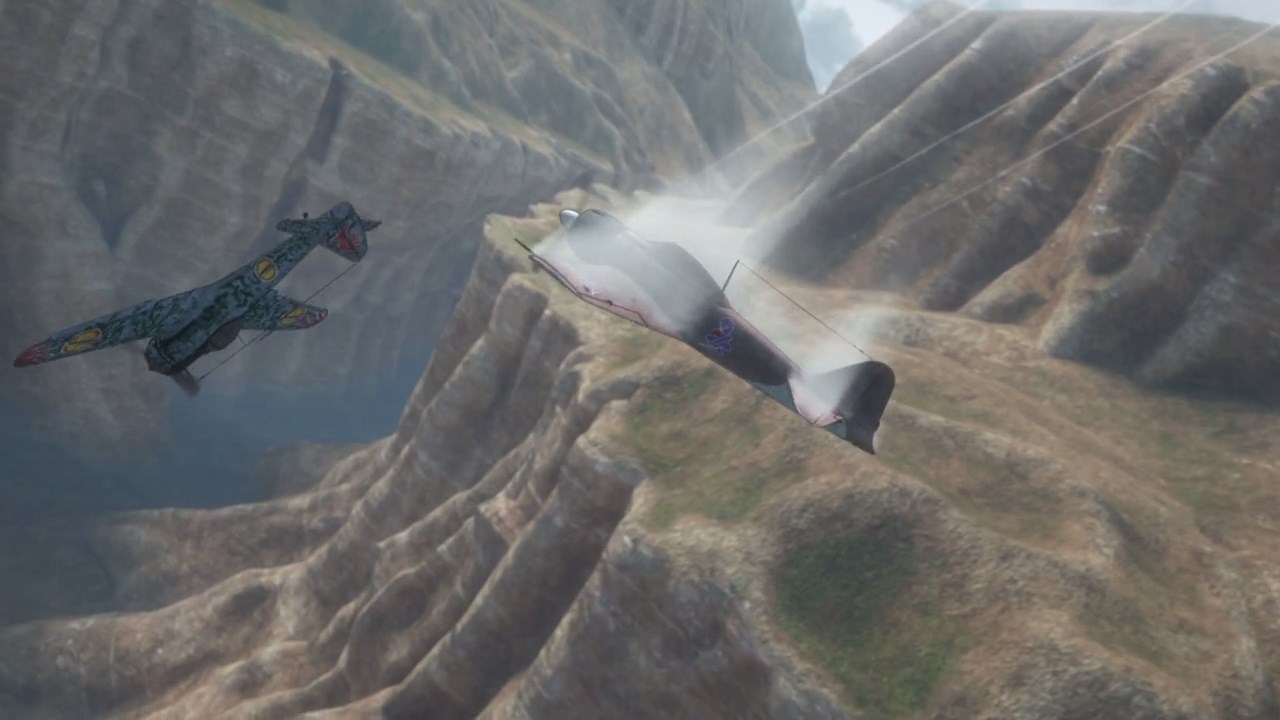 However, it appears that this enemy plane is quite skilled at out-maneuvering Kirie. As you can see, it just stops for a brief time so that the plane can go behind at Kirie for the kill. 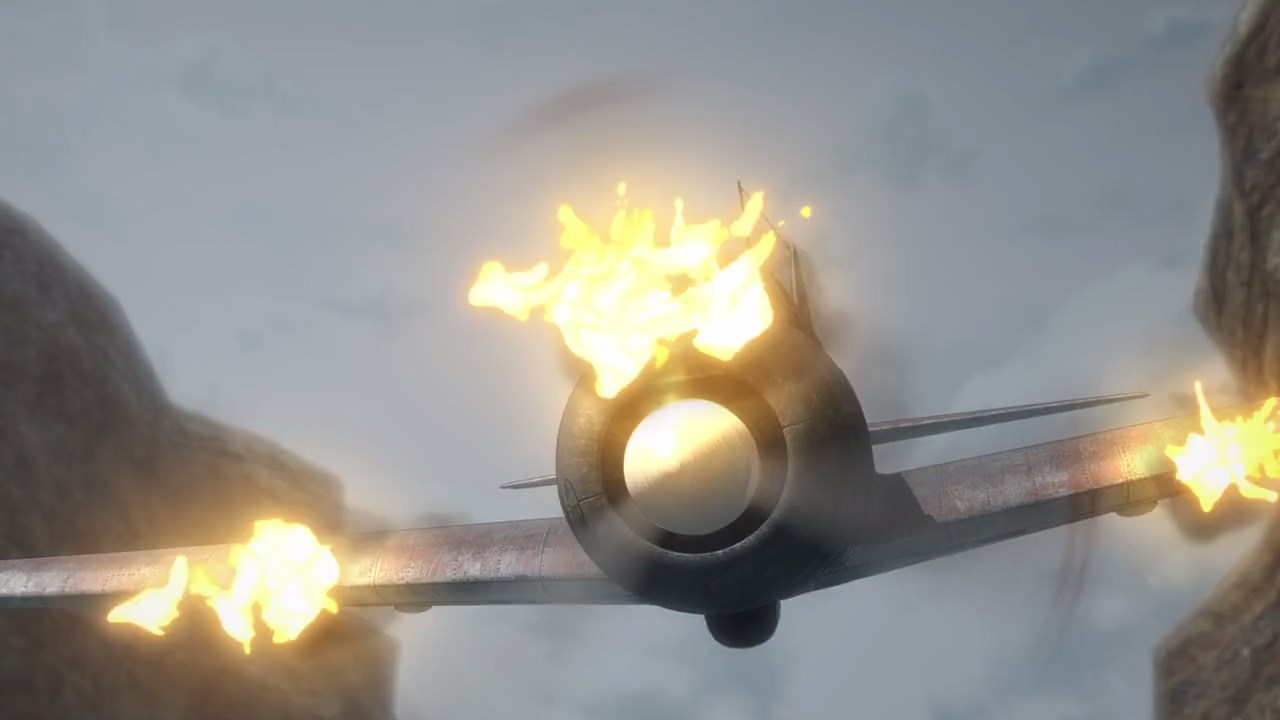 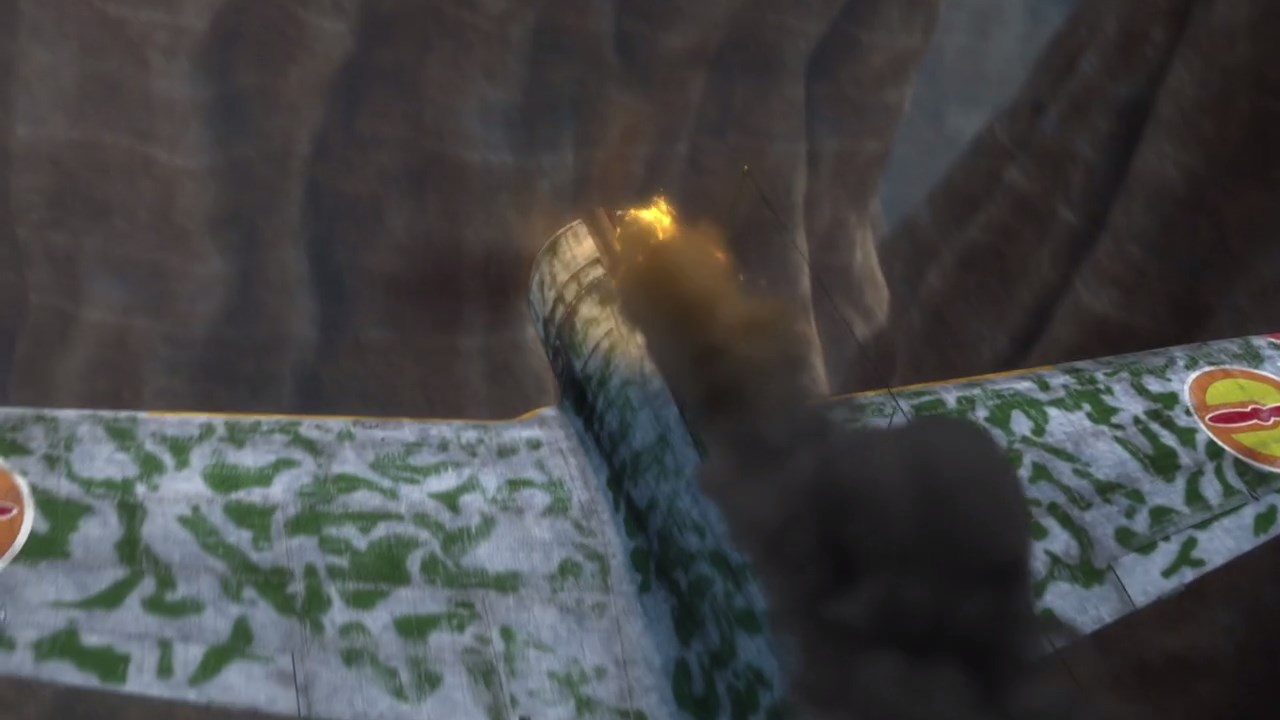 But anyways, Kirie is shot down yet again as the enemy plane is just too damn good to beat it. And as for Kirie, she’s gonna crash somewhere in the valley. 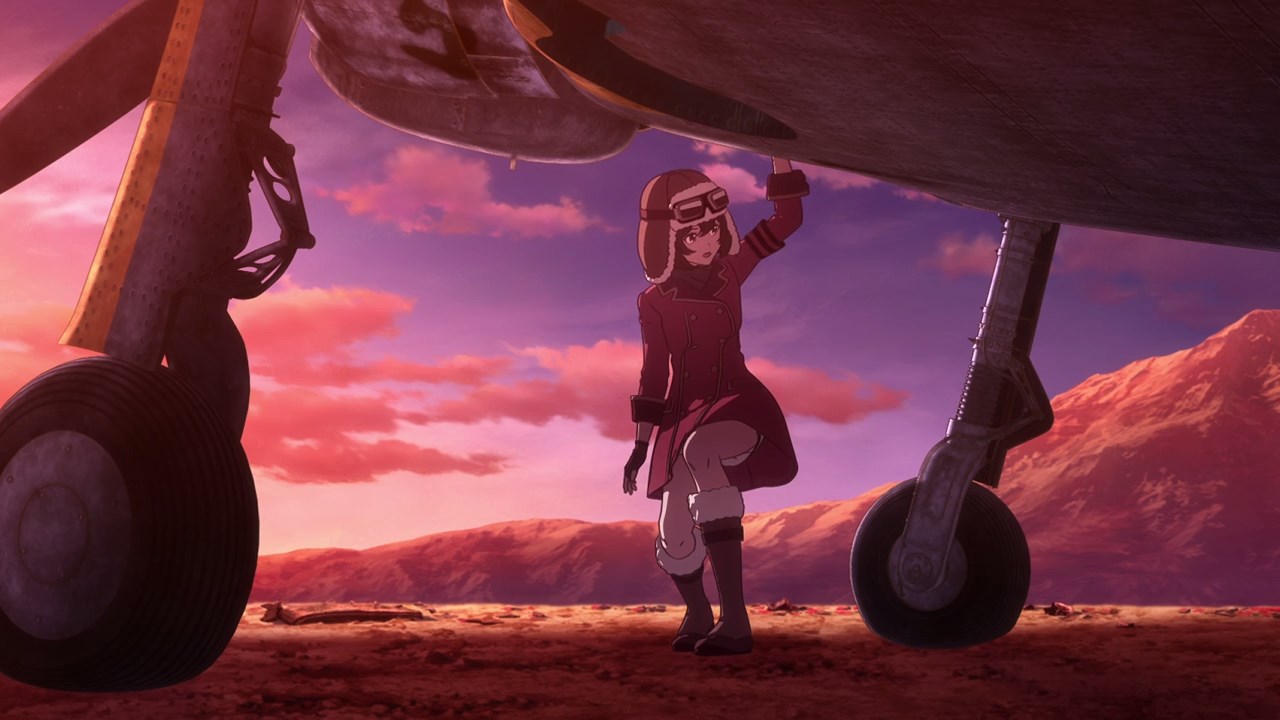 Fortunately, she survived but Kirie is stuck with a bag full of money and a broken airplane. With that said, Kirie is currently camping out at Ofukouyama where she has some fond memories to it… 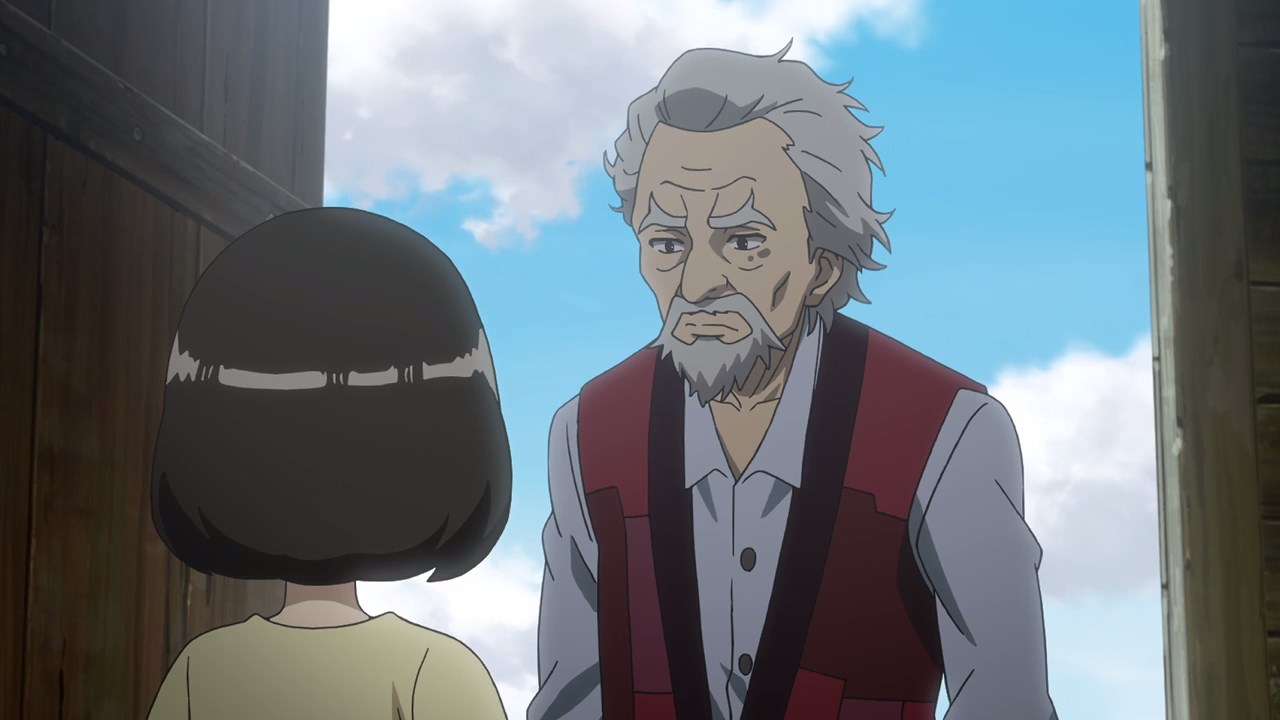 …especially towards this old guy from Yufang. This old man is called Ol’ Sabu and Kirie was curious about everything related to his home country. 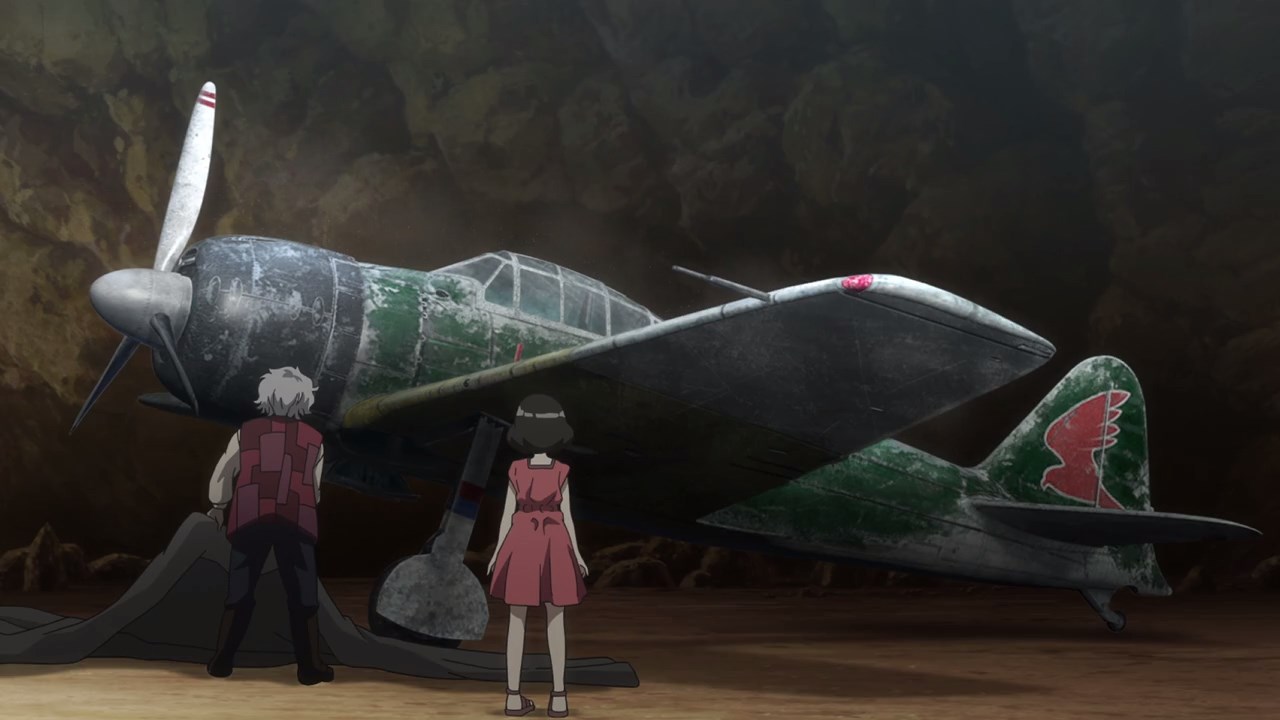 Heck, you might say that Kirie learned how to fly from Ol’ Sabu after showing her this wonderful airplane. 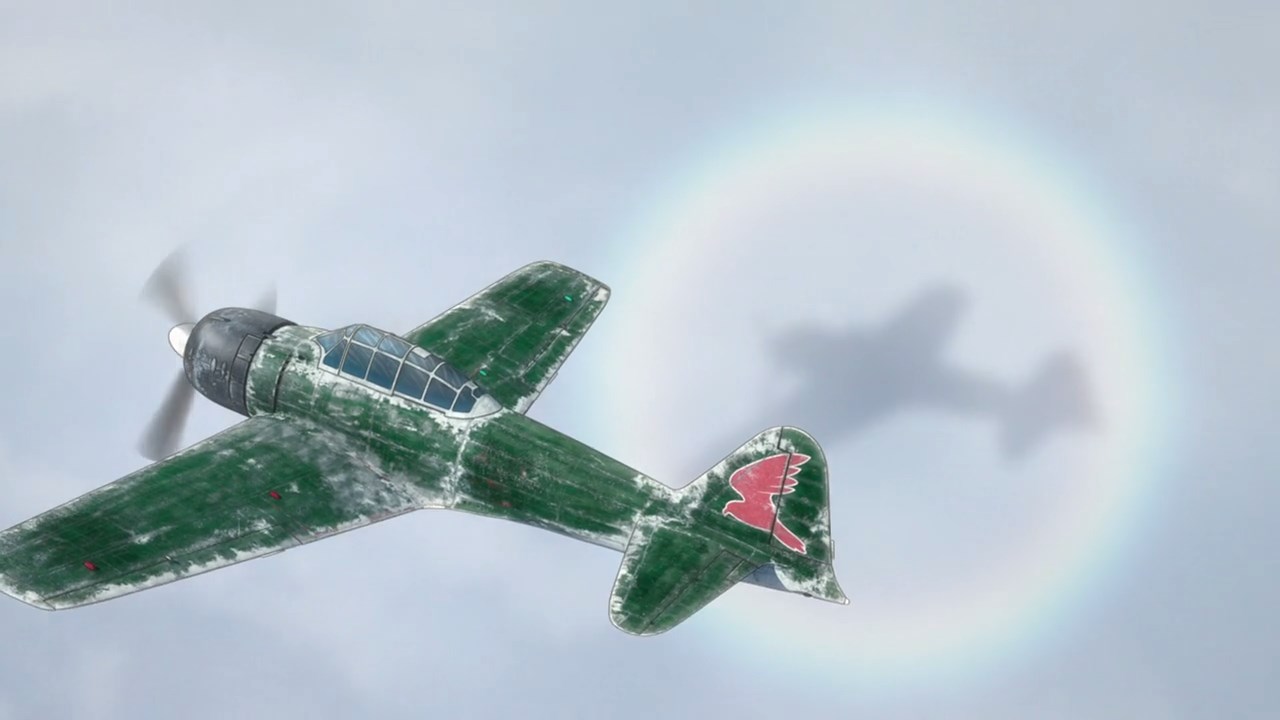 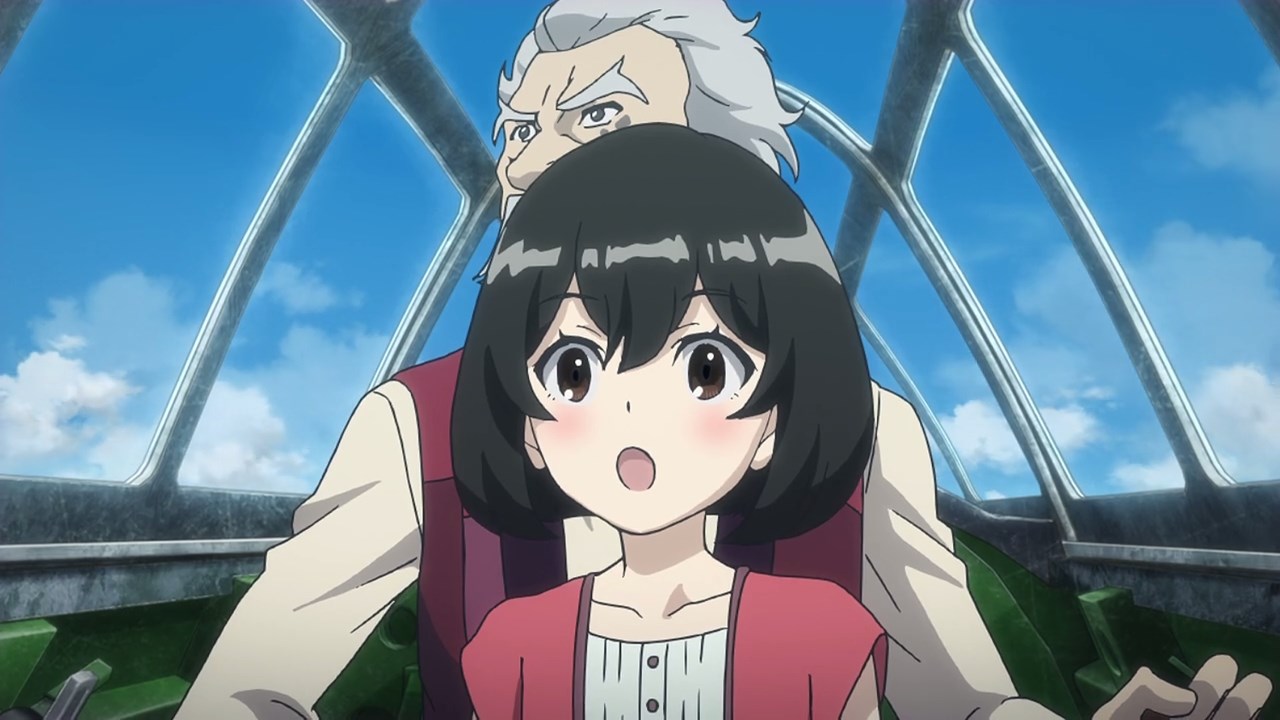 And so, Ol’ Sabu teached Kirie how to fly an airplane until she becomes a full-grown woman. For Kirie, it was an unforgetabble experience. 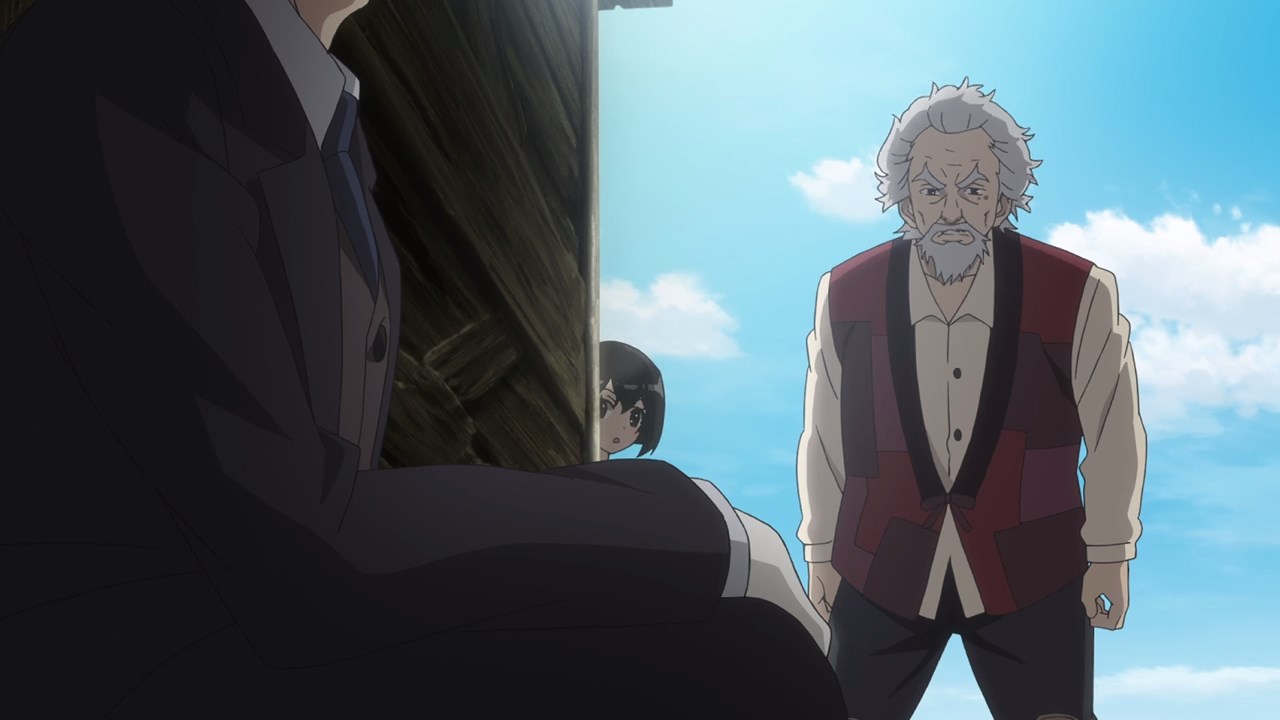 However, all good things must come to an end when this mysterious person in a black suit offered Ol’ Sabu to create new weapons for his organization. And this is where Kirie learns that Ol’ Sabu used to create weapons of war.

Of course, Ol’ Sabu told the person to leave and he refused to make weapons again. Then again, that person will return to pester the old man until he gets what he wants. 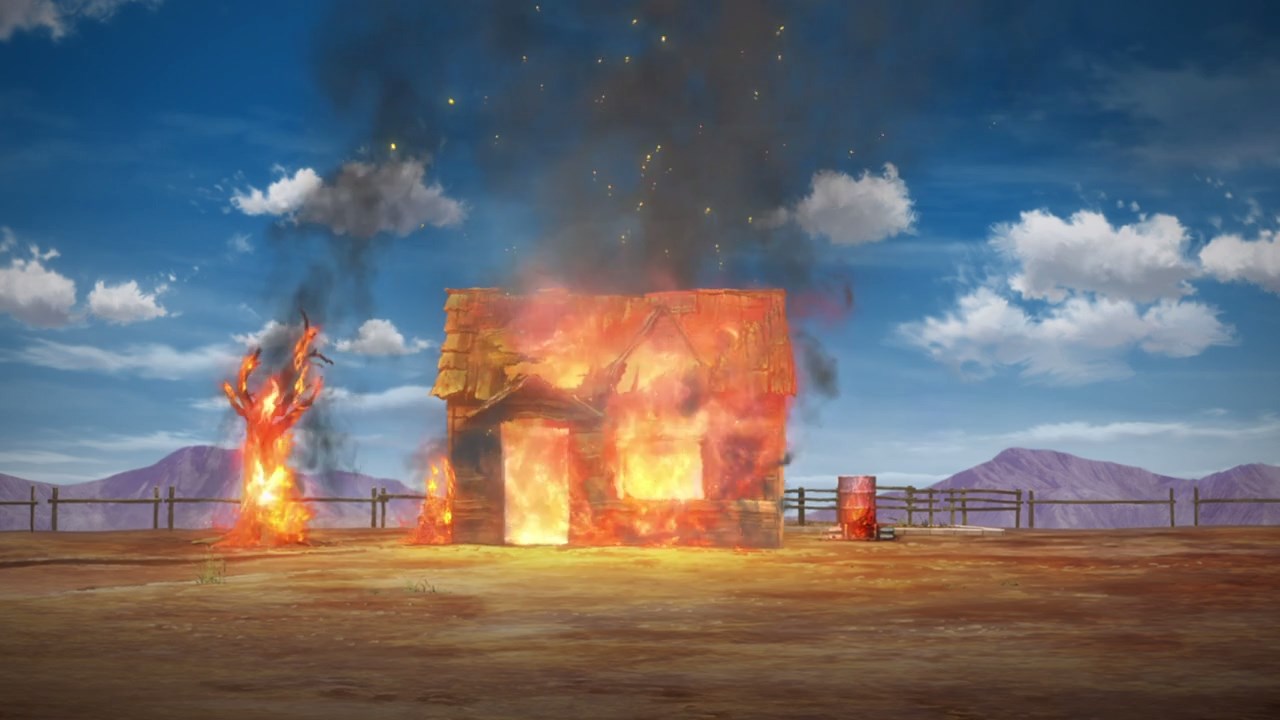 The next day, Kirie went to Ol’ Sabu’s place, only to find his home burned to a crisp. As for Ol’ Sabu, he disappeared and never returned to this plateau ever since. As for that mysterious person in a black suit? I don’t know what happened to that guy!

Although she had a great time spent with the old man, it’s sad that Kirie won’t ever gonna see Ol’ Sabu every again. Then again, I feel that the old man is still around somewhere. In fact, that enemy plane might be piloted by Ol’ Sabu, but it’s just speculation on my part. 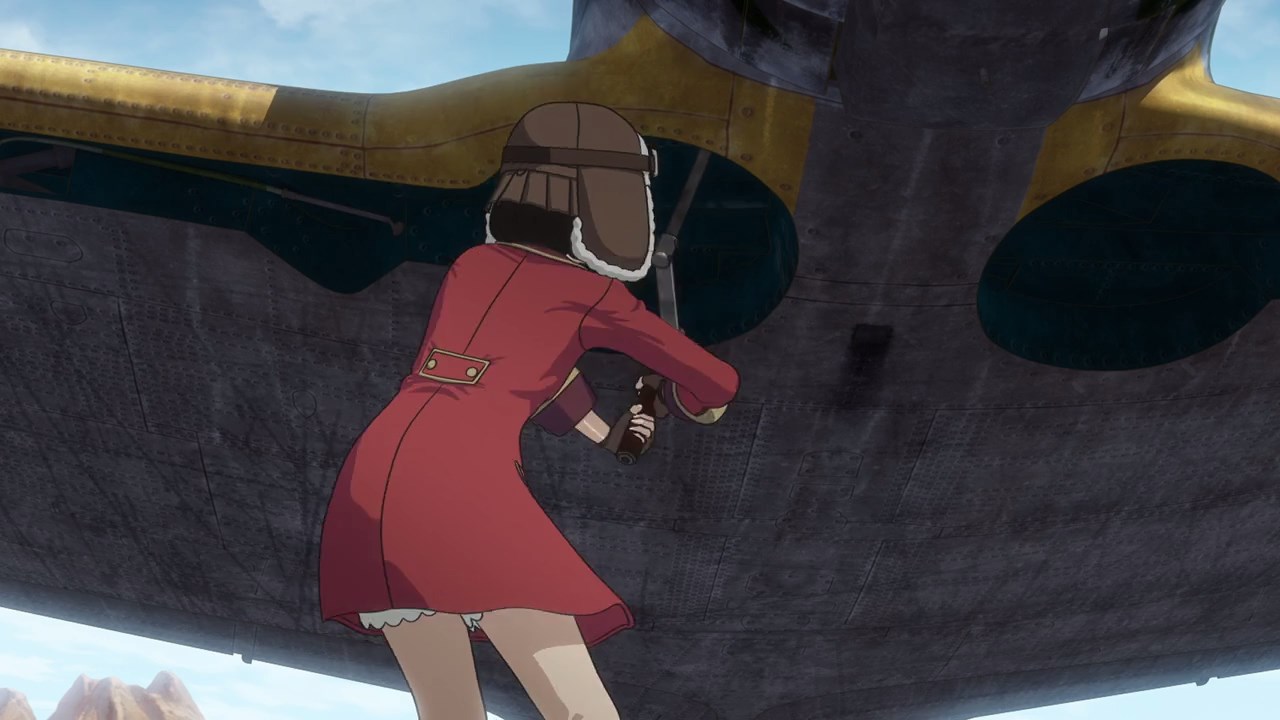 For now, it’s time for Kirie to fix her airplane and get out of this plateau as soon as possible. All she needs is to find some scrap parts that can be used to fix the engine. 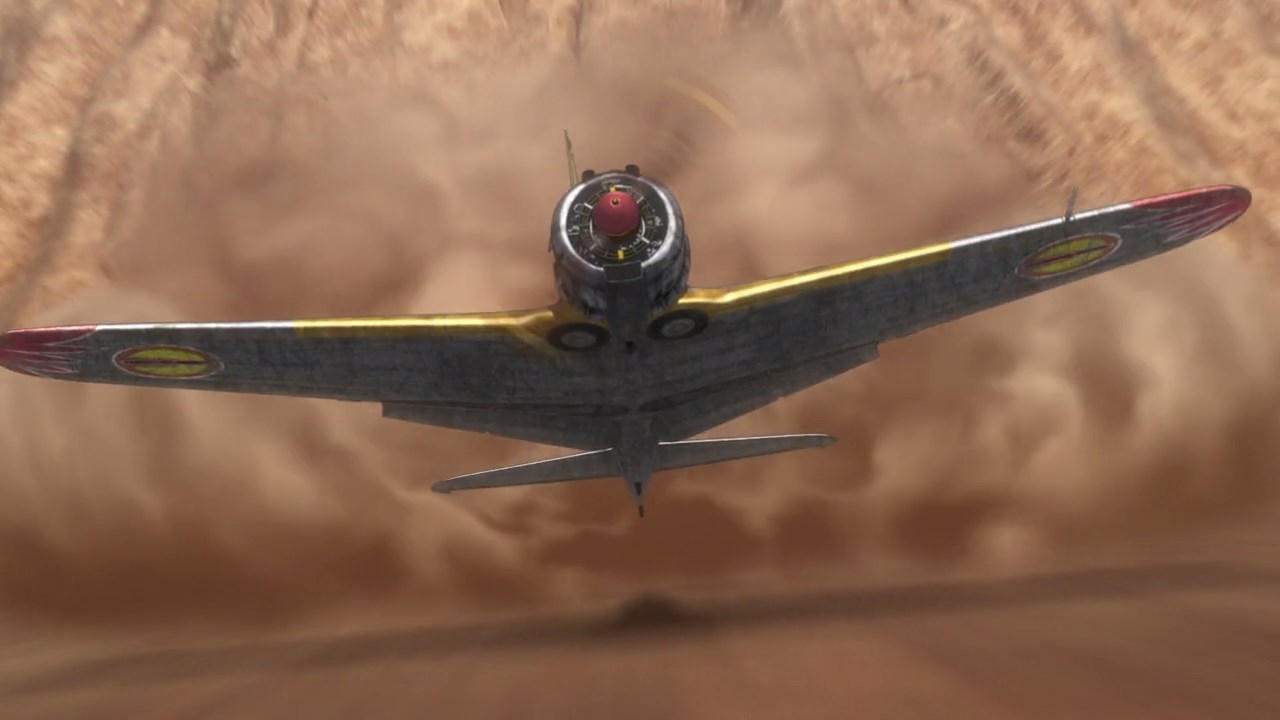 Then again, she has one shot of getting out of Ofukouyama. Otherwise, Kirie will be left to die there at the valley. Man, I blame that snake ignisia plane for shooting Kirie’s plane down. 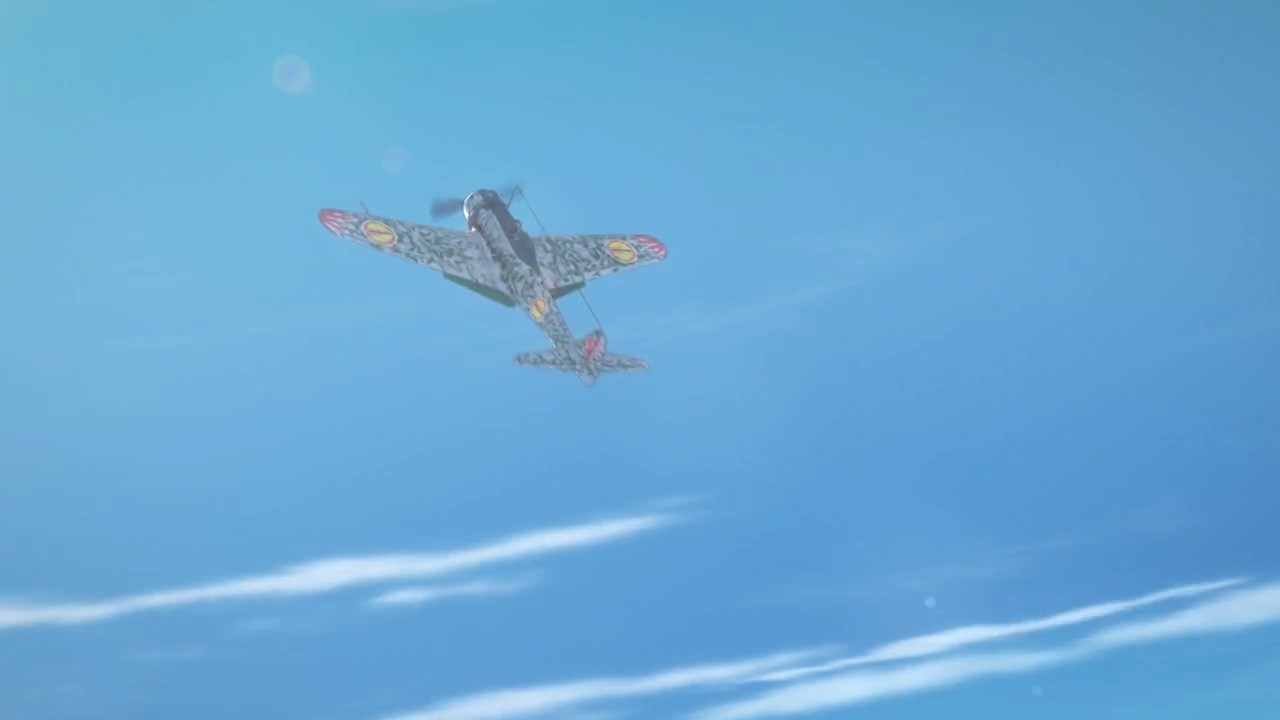 Luckily, Kirie managed to get out of the valley as she went towards the skies and head home.

And it’s all thanks to Ol’ Sabu that Kirie became a finest pilot, albeit not quite the finest since she got shot down two times. 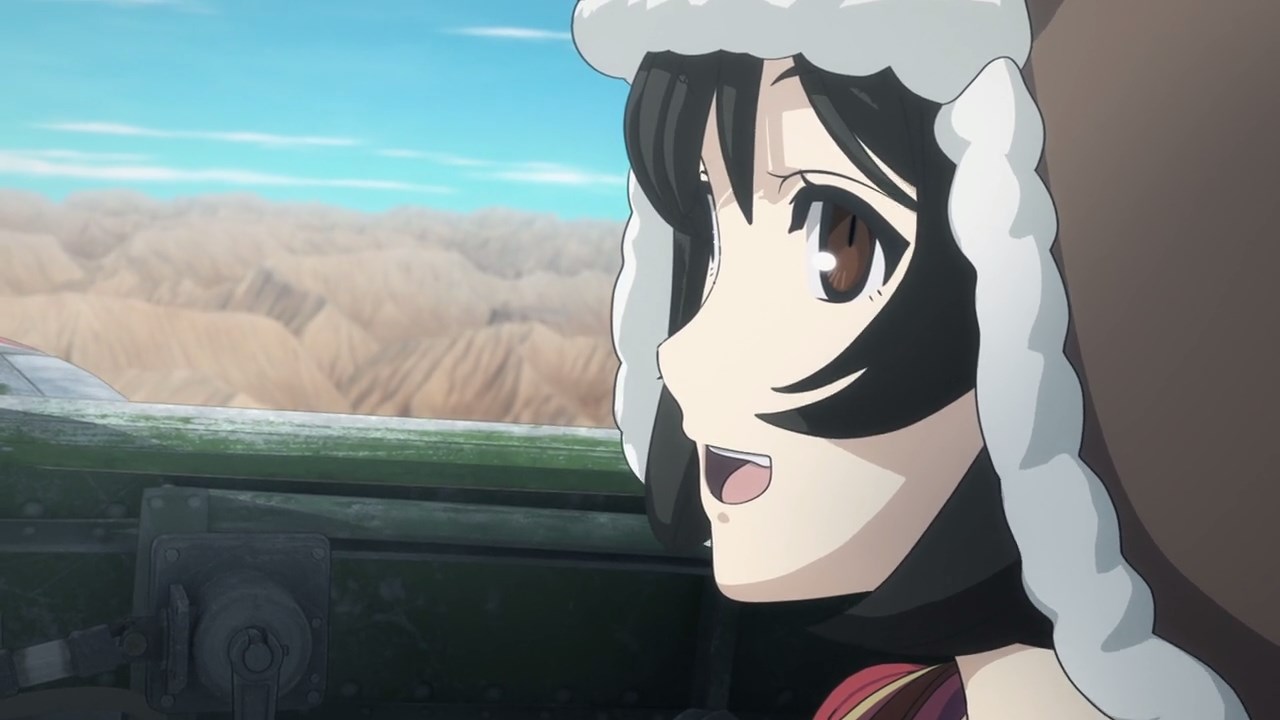 Anyways, let’s end this episode where Kirie heads home to her teammates, although they’ll get mad over her temporary desertion. Hell, her teammates will get even more angry if Kirie lost the money!