The Rising of the Shield Hero Episode #07 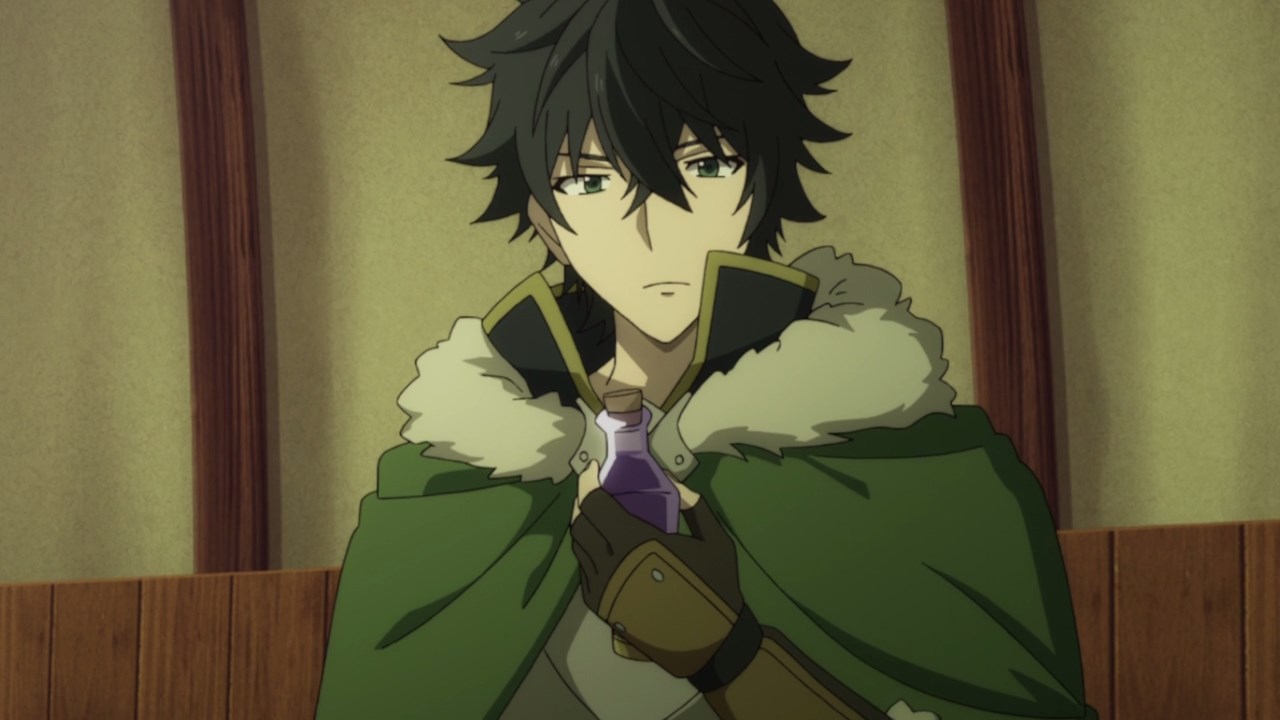 On this episode, Naofumi Iwatani and his party was asked by a fellow trader to bring lots of herbicide potions for something dangerous… 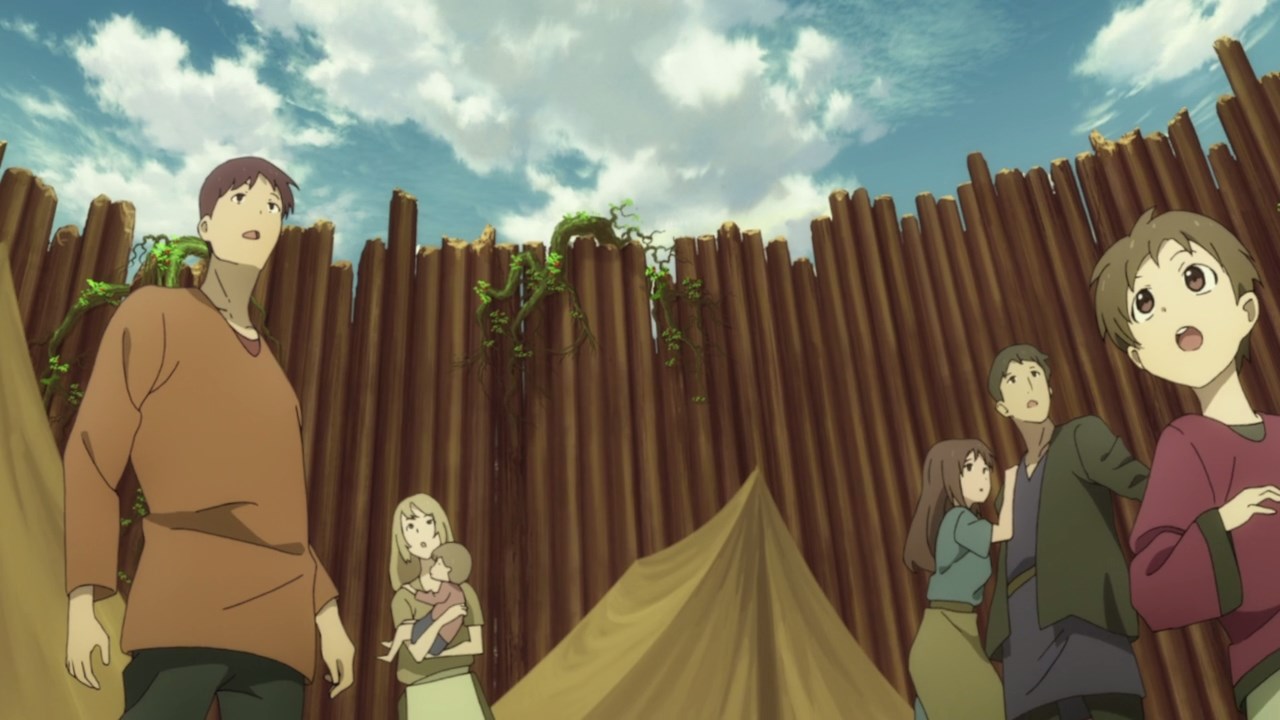 …like dealing with an overgrown plant that enroaches the entire town. Oh, and this plant is sprouting monsters that various adventurers couldn’t handle the endless number of enemies being grown from a single plant. 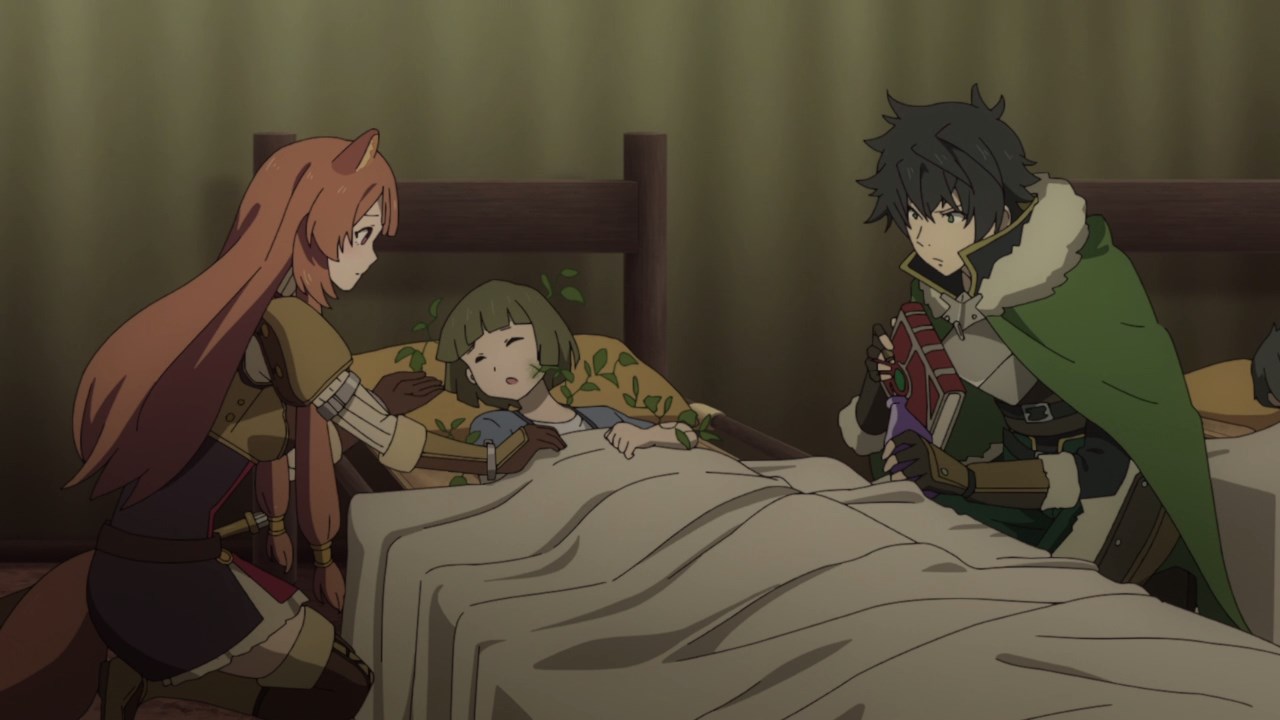 Oh, and it gets worse is that the plant is also enroaching the villagers, sapping their life energy away.

Of course, the reason why the villagers are suffering like this is because they received a “miracle seed” from a certain Spear Hero which Motoyasu Kitamura claimed that it will alleviate famine throughout the village. Then again, the villagers later found out that the “miracle seed” is actually cursed when a malevolent alchemist created it, but later the seed was sealed away simply because it’s too dangerous. Oh and the kicker though? The seed was stored at the caves where Naofumi and his party fought the nue and took the gemstone from the previous episode.

You know what, I think Motoyasu should think twice of completing a mission like getting that seed from the caves for example, yet the Spear Hero did it anyway because he was convinced by Princess Malty that the so-called “miracle seed” can help alleviate hunger. Man, I blame him and the rest of the Cardinal Heroes as they’re operating under game logic. Well, except for Naofumi as he learned that this world is not a freaking video game. 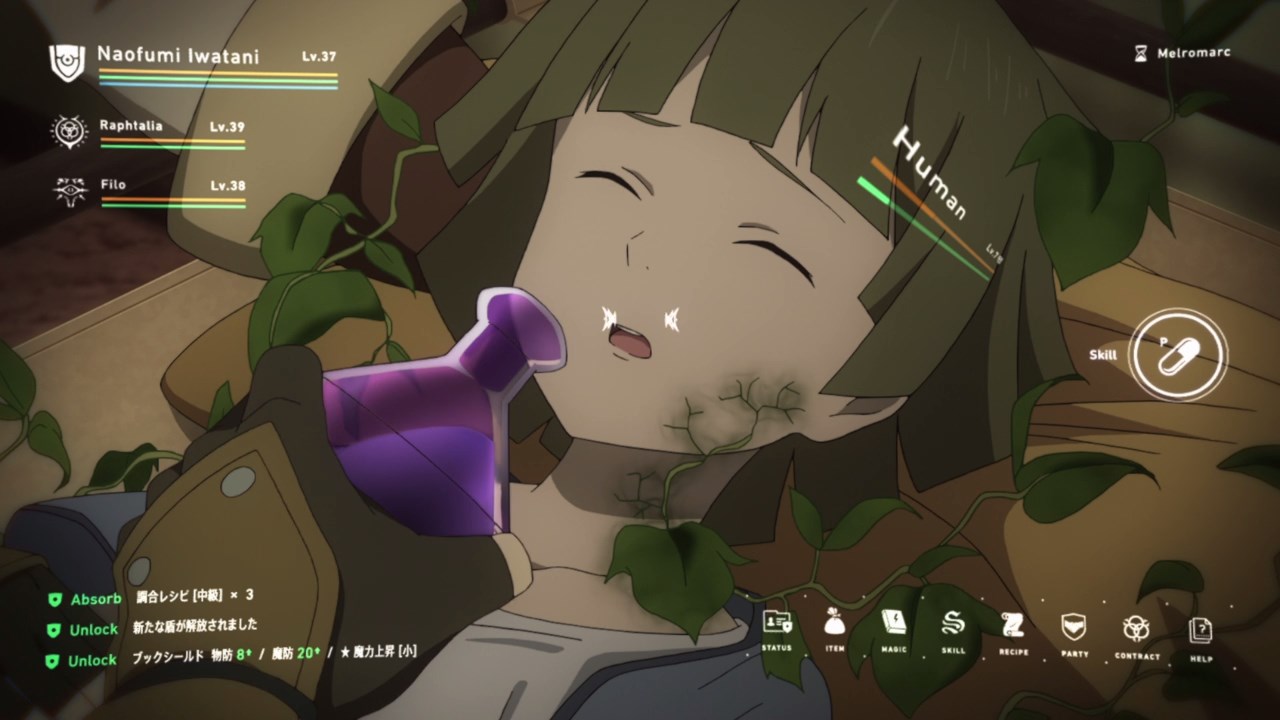 But anyways, time to stop this plant from enroaching the entire population, starting by ingesting them with herbicide. Not sure if it’s safe for consumption though because herbicide might be lethal to drink. 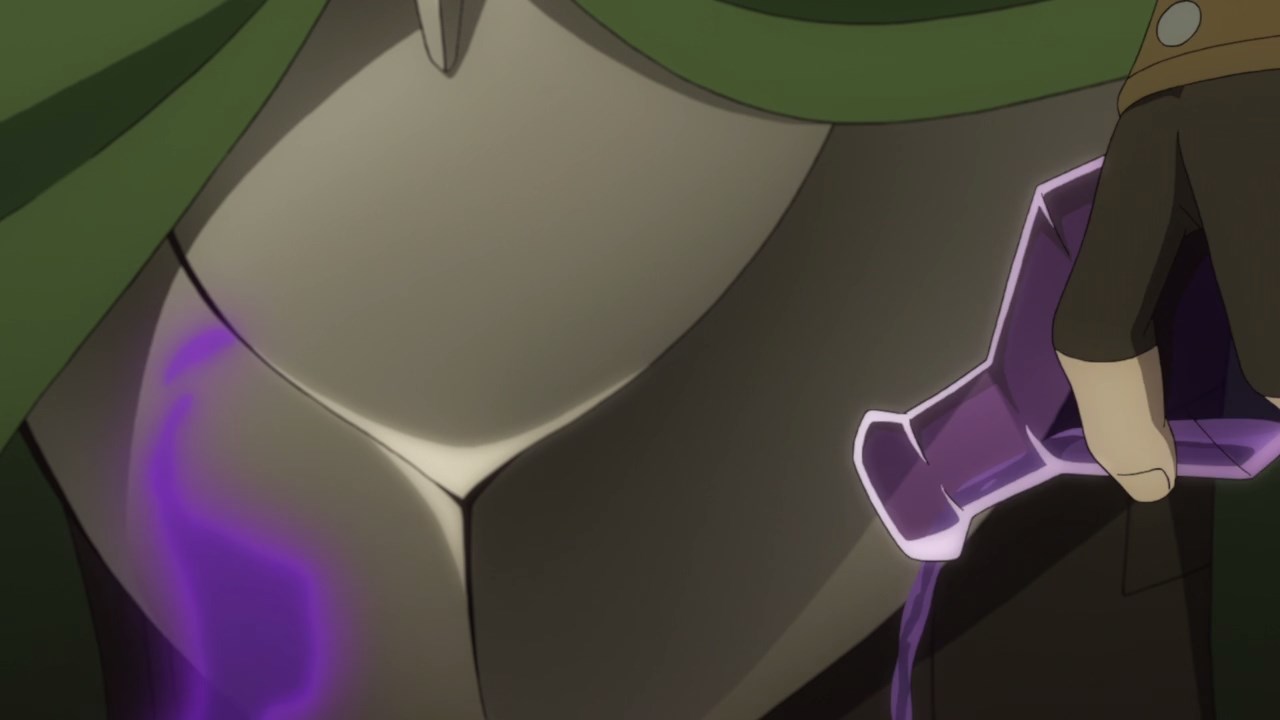 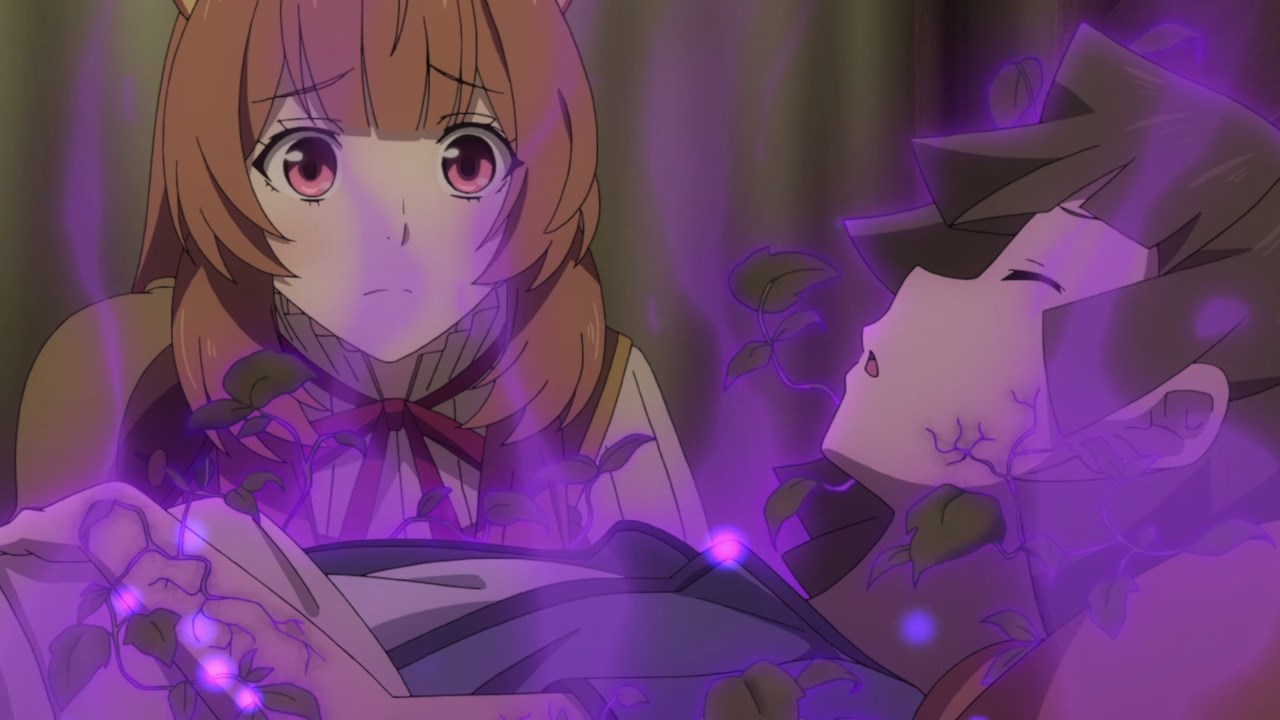 However, Naofumi decides to pour the herbicide onto the plant instead but still, it’s not enough to stop the enroachment unless the Shield Hero and his party defeat the plant itself. 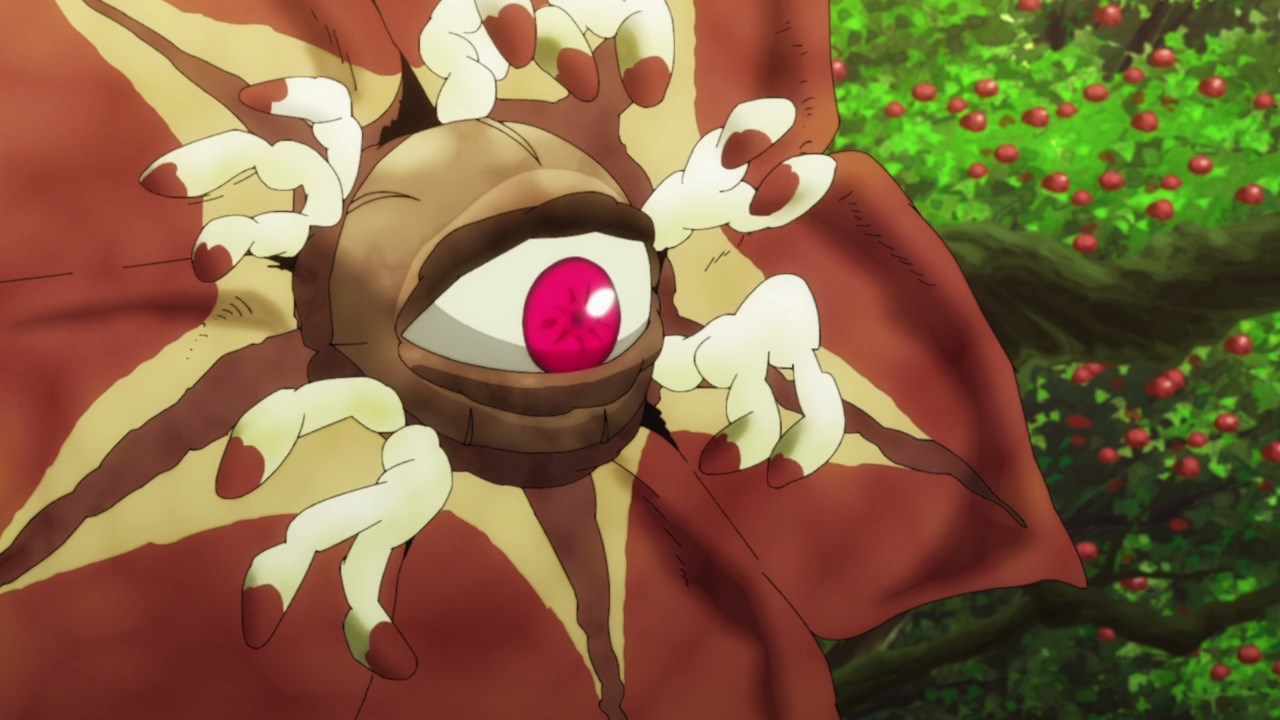 In fact, this plant is already grown to its massive size that Naofumi can’t just burn it to the ground by throwing herbicides at the plant. Someone needs to take out its core! 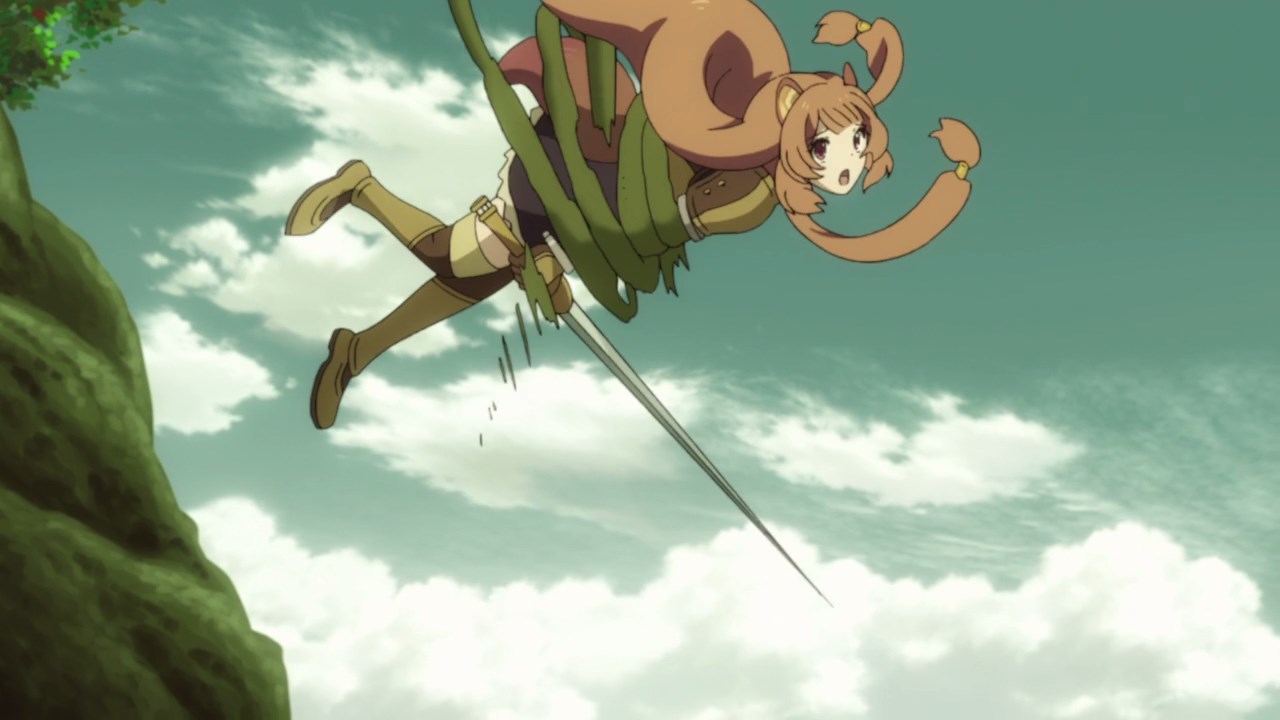 Thus, Raphtalia goes into action but she got tied up by that plant instead. Man, I have to say that this plant wants to get dirty on Raphtalia by using its tentacles! 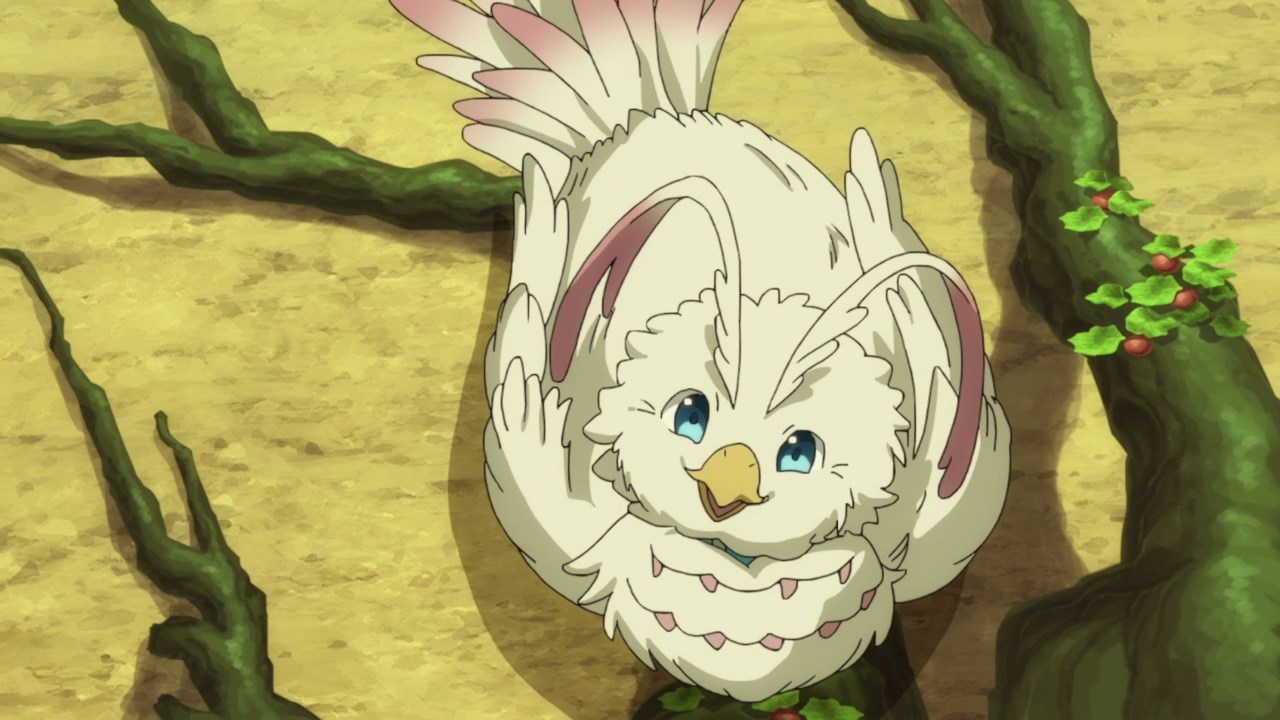 Oh, and here’s Filo laughing at Raphtalia for being a klutz. You know, I feel that both of them are at odds over Naofumi. 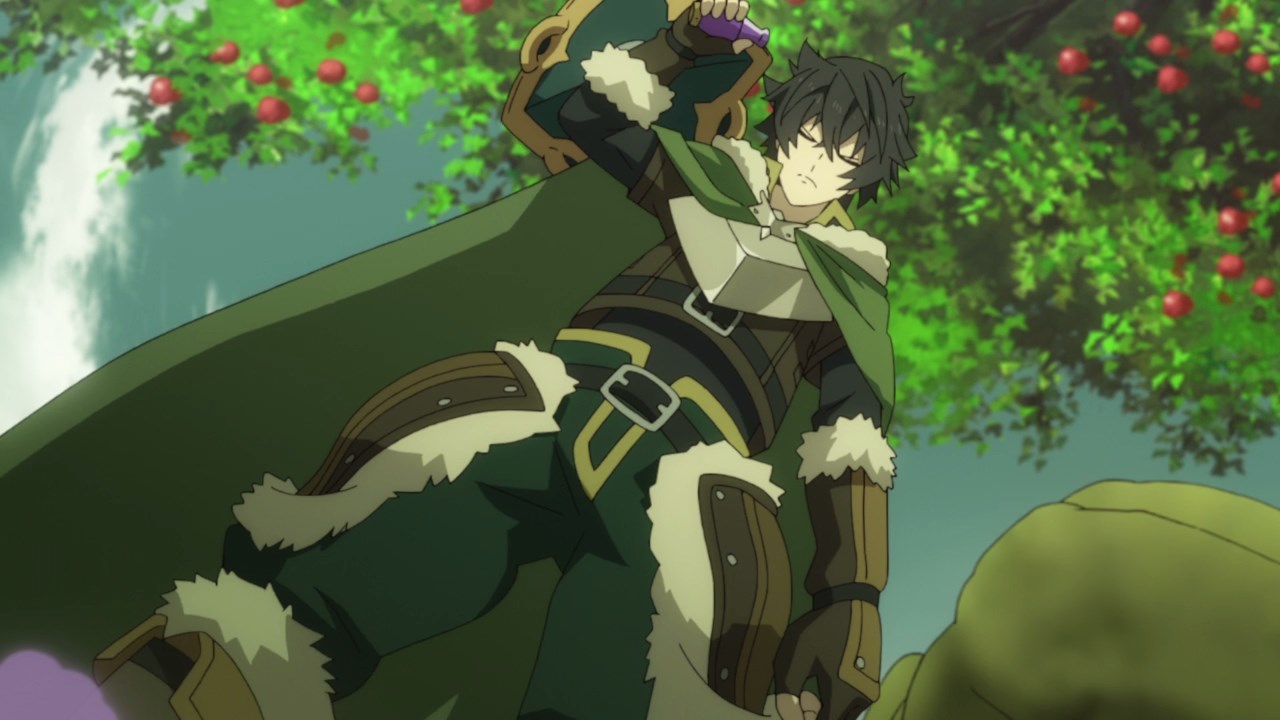 But speaking of Naofumi, he decides to use lots of herbicide to destroy the plant after taking out its core is a bad option. And how will he do it? 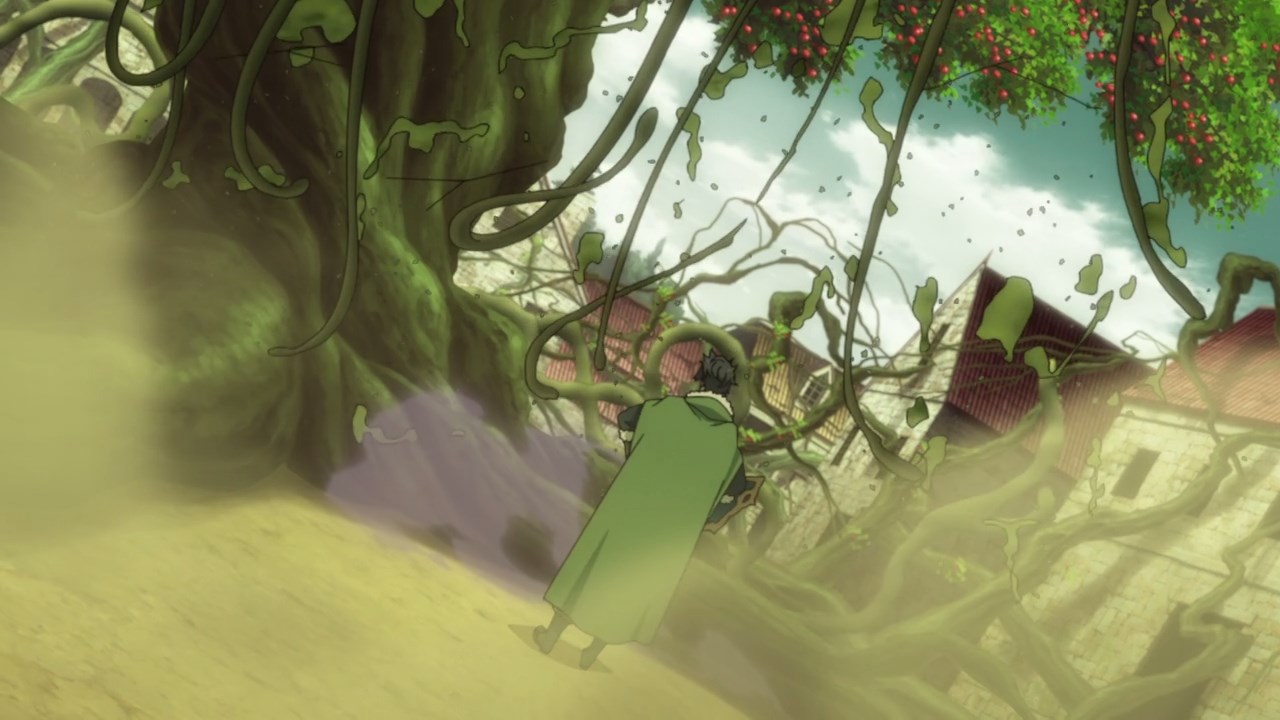 Simple, by enhancing the herbicide’s poison properties using magic. And what do you know, it’s super effective against this monstrous plant that it’s now defeated! 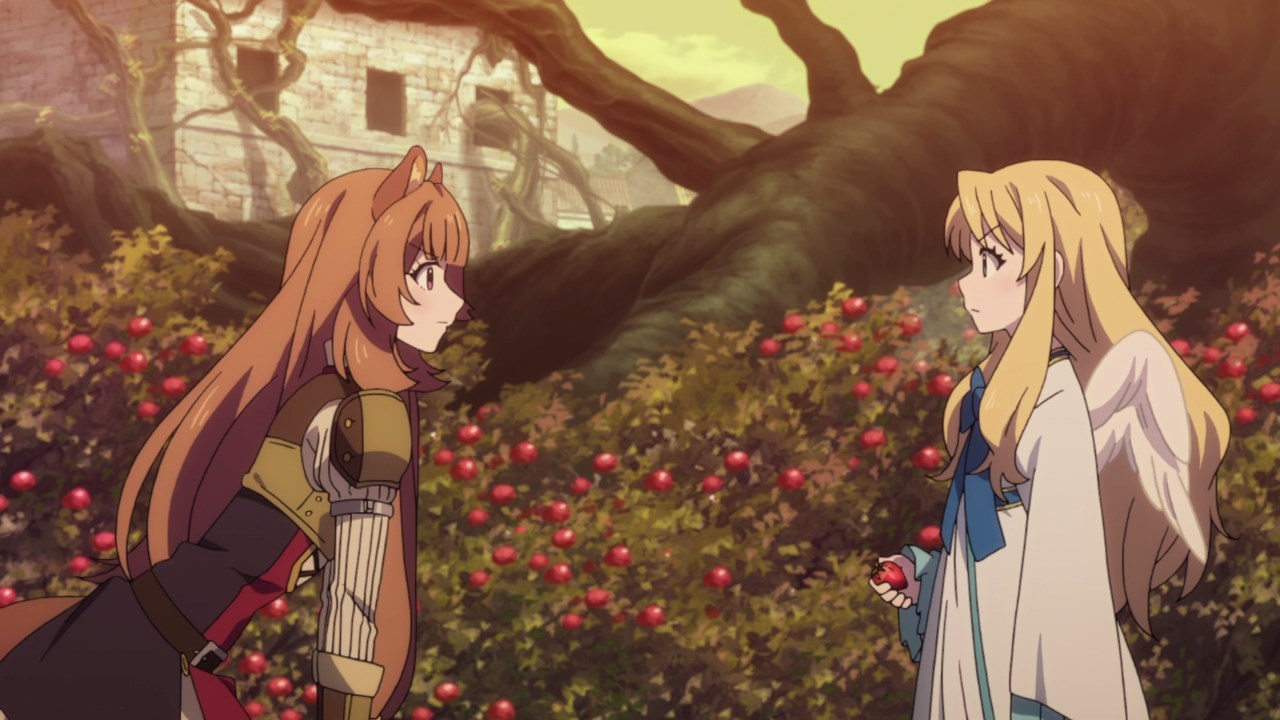 Then again, there’s some growing animosity between Raphtalia and Filo as they’re bickering over Naofumi’s attention. Really you two, you should work together for once! 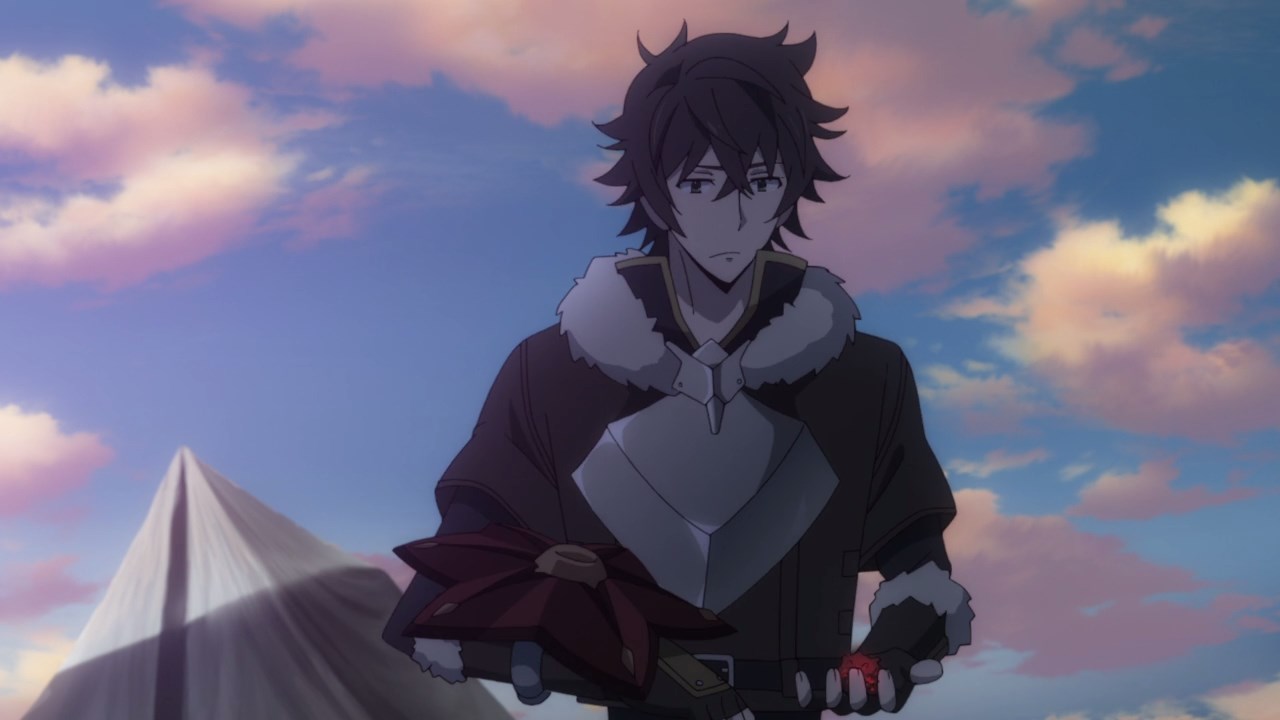 Oh yeah, I forgot to tell you that even though the plant is destroyed, there’s still some seeds left on its carcass.

Normally. the villagers will simply throw it away since it’s freakin’ cursed, but Naofumi Iwatani has a solution by modifying its DNA, removing any sort of poison and any mutation genes on this seed. 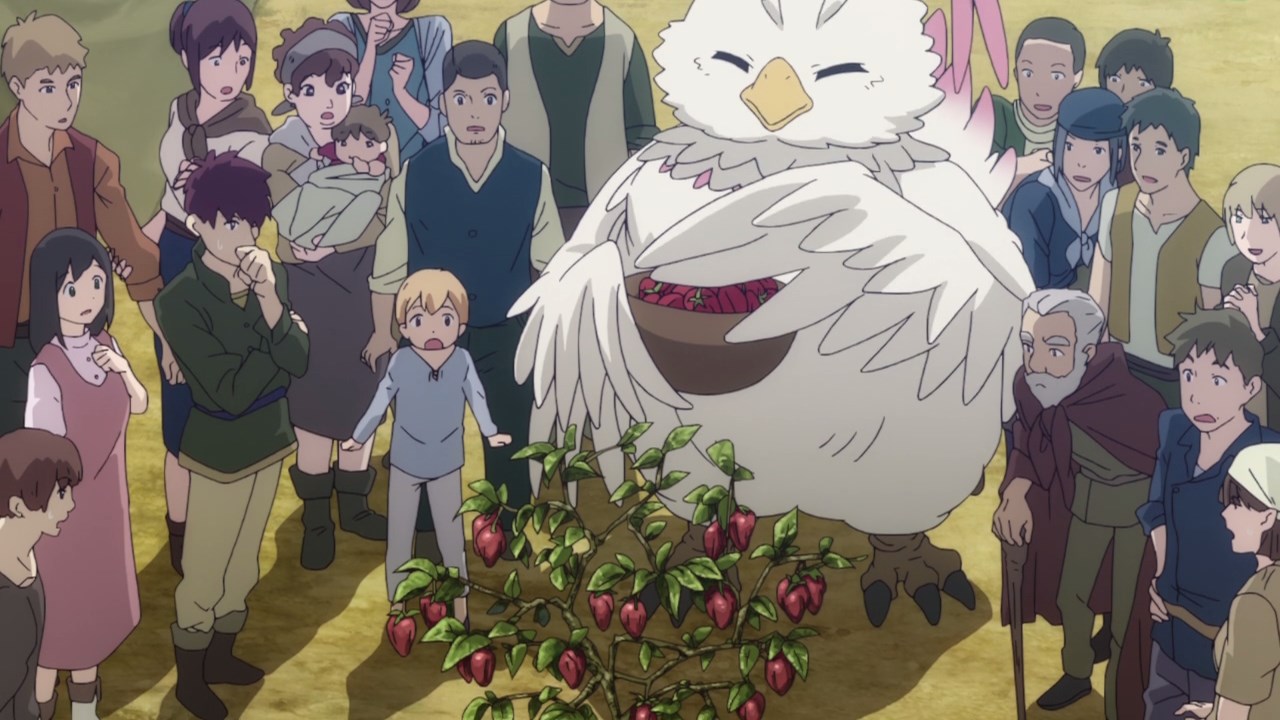 And after some modifications, Naofumi tested his seed and voila, the villagers got some fruits to eat which is better and safer. See Motoyasu, never underestimate Naofumi’s skills just to fix your goddamn mistakes! 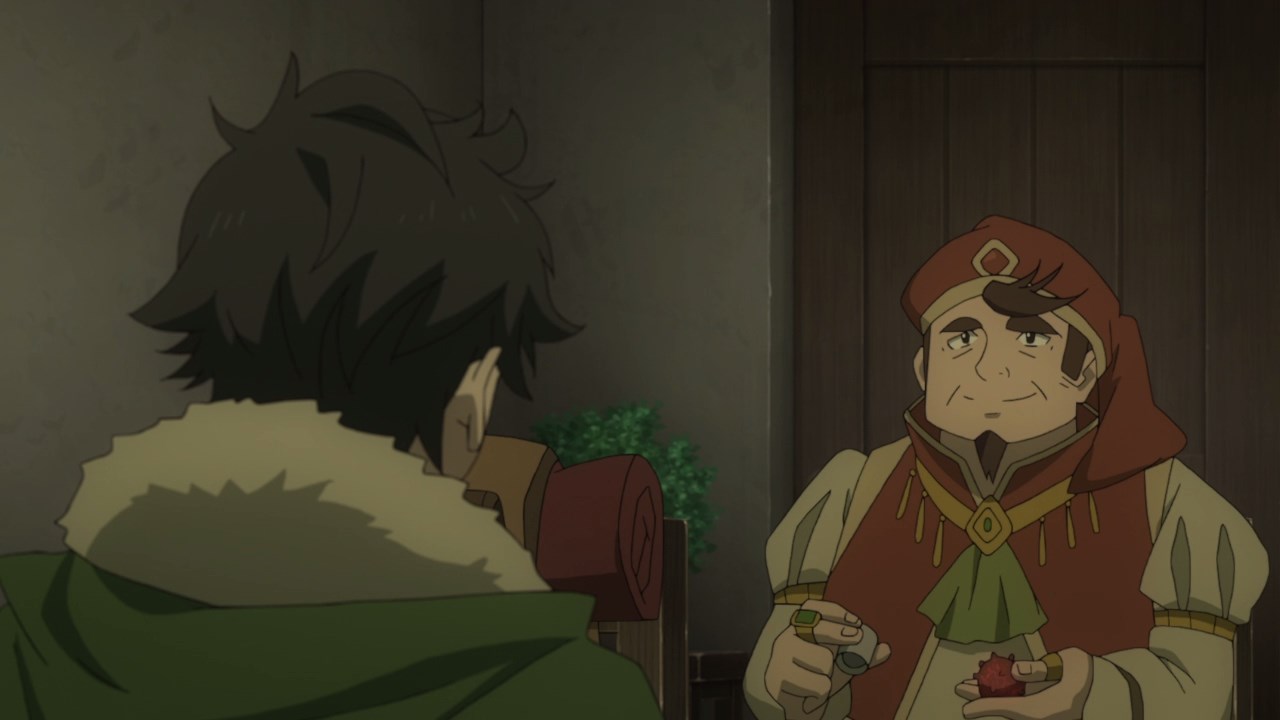 Oh and as for the excess fruits and seeds, the Shield Hero sold them to his fellow merchant for a reasonable price. After all, money is important to survive this harsh world!

Also, this merchant told him that there’s a hot spring where Naofumi and his party can relax… after delivering the goods to the rightful person.

Now then, this is the part where some people wanted it skipped, but Kinema Citrus wants to include it anyway as we got Raphtalia bathing alone.

And really, she’s freaking angry because Raphtalia expects Naofumi to be with her, but the Shield Hero is busy with other things… 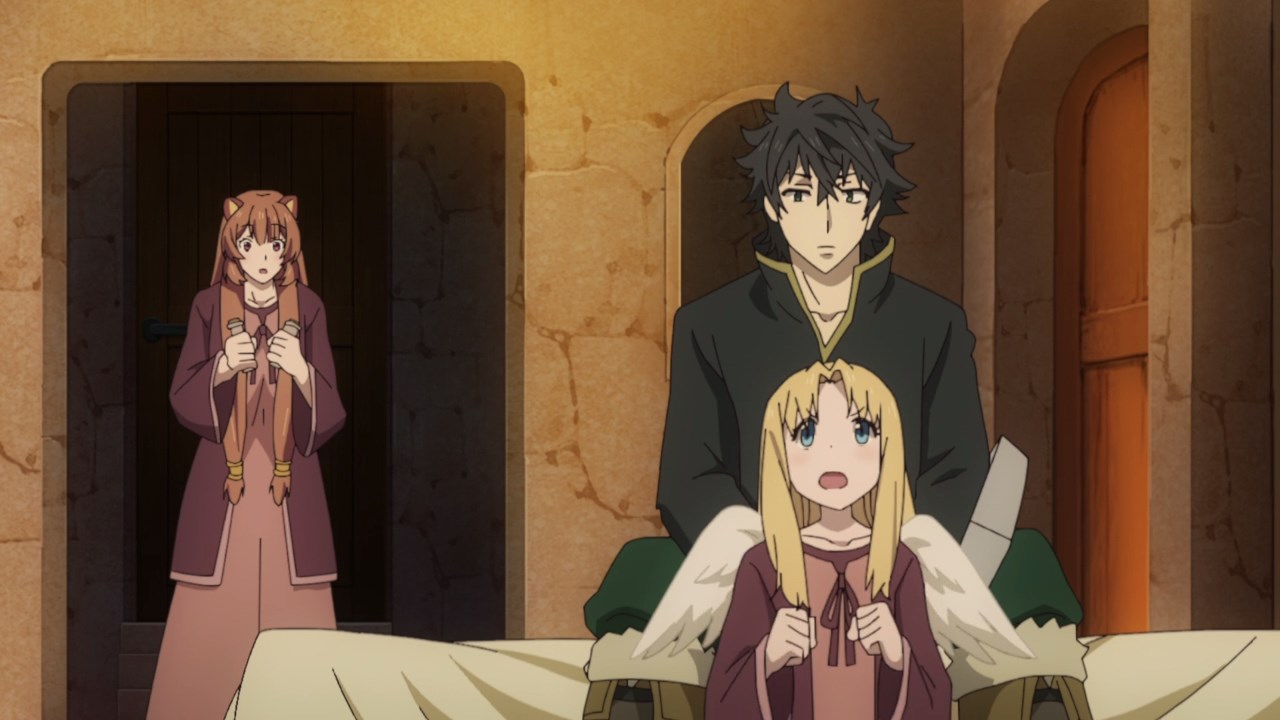 …like taking care of Filo because she’s a little girl while Raphtalia is now a grown woman. At this point, Naofumi might abandon her so Raphtalia decides to give the Shield Hero a gift before it happens. 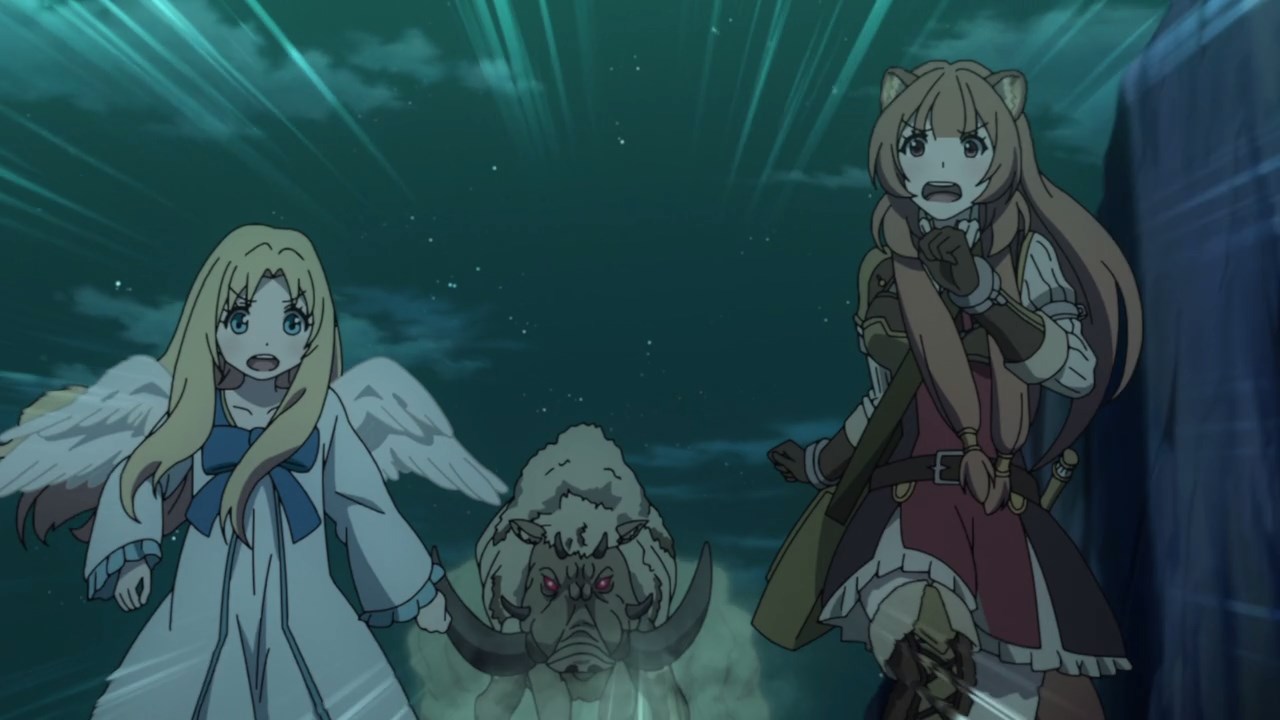 Then again, there’s Filo which she wants to give Naofumi a gift too. You see, they’re aiming to reach towards the gacocco’s nest the where Raphtalia attempts to get a latium crystal, while Filo wants to capture one egg of that bird.

However, they’re end up being chased by this silver razorback boar and it’s gonna be a wild ride towards the top of the mountain. 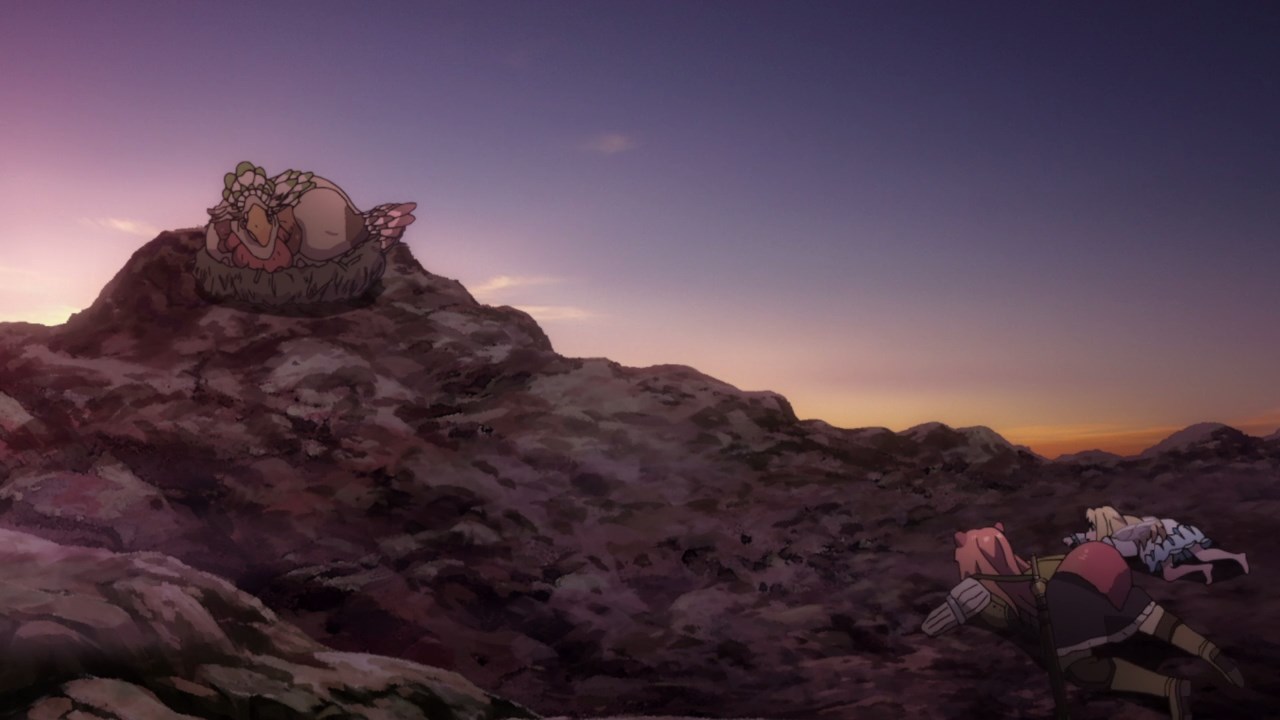 And at last, they’ve reached the nest of the gacocco bird they Raphtalia and Filo sneaked in to get their respective items out of that bird. 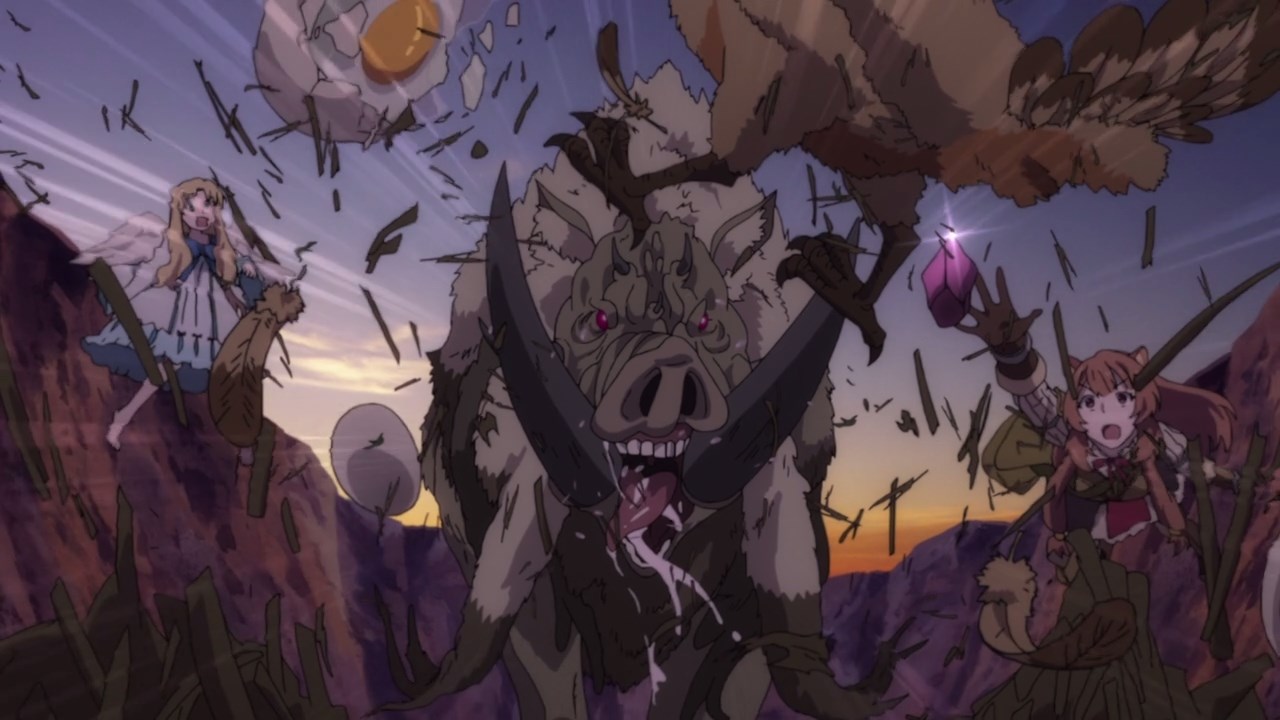 Unfortunately, both girls’ hopes of getting Naofumi a gift where suddenly dashed when that silver razorback crashed the gacocco’s nest. Well, there goes the latium and the gacocco egg! 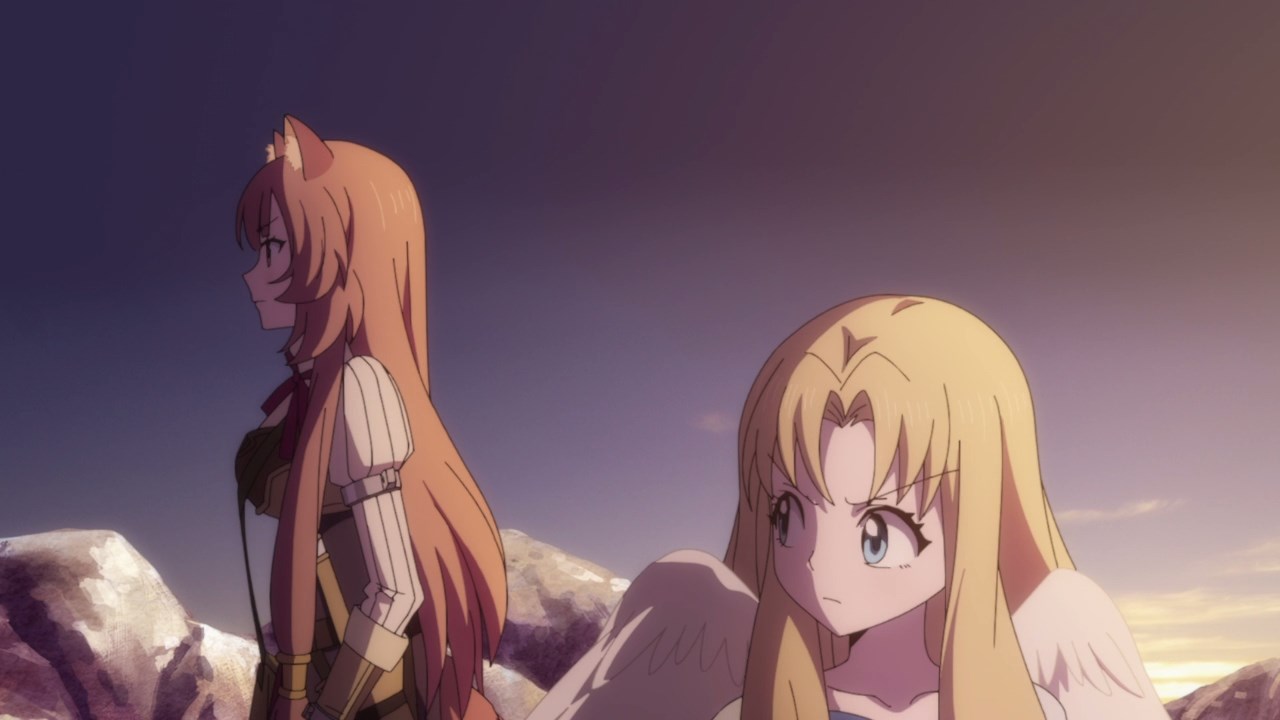 And as for the girls? Both Raphtalia and Filo are angry that their gift was ruined by some boar. And thus, they decided to hold a truce between themselves… 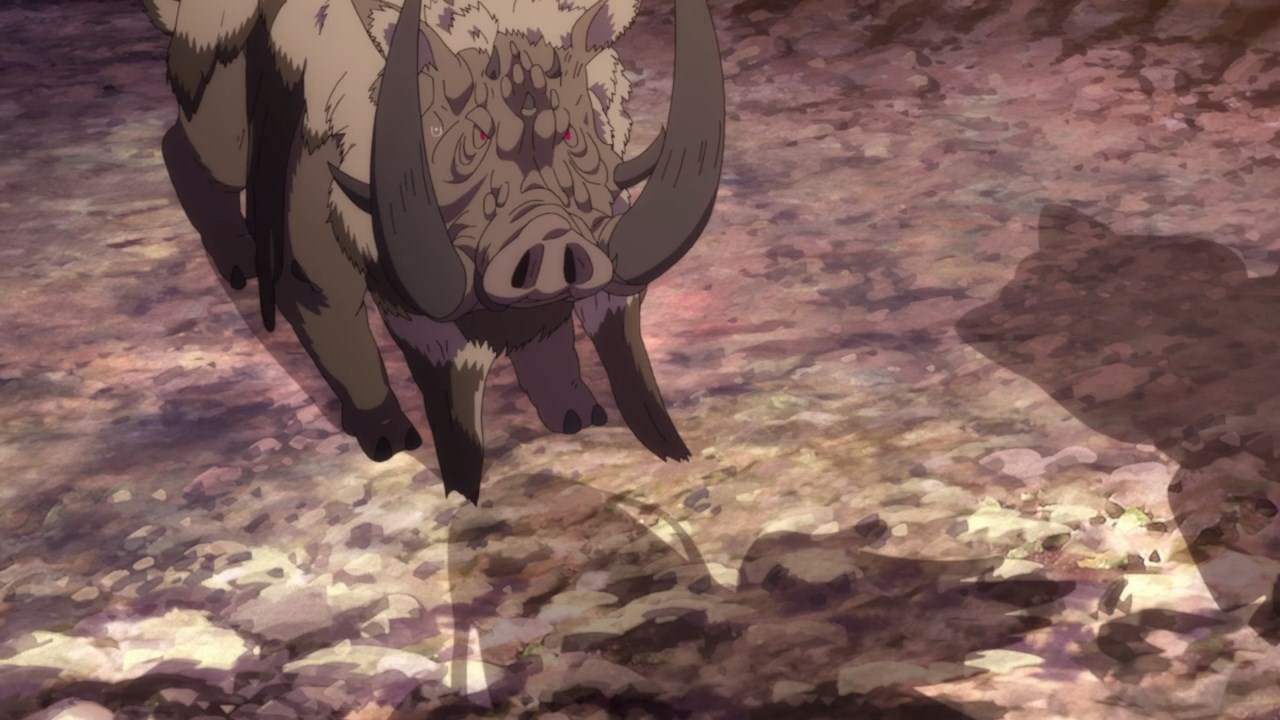 …and vent their frustration over this silver razorback. Well, looks like this boar will meet its maker! 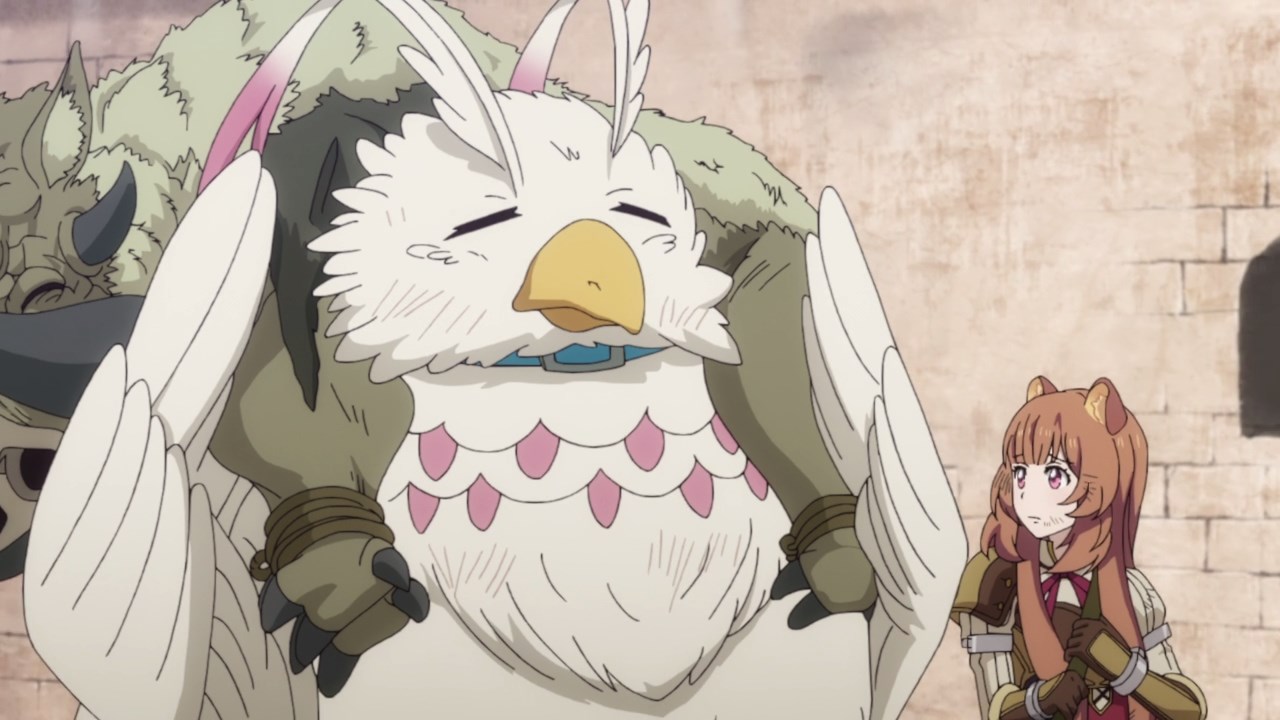 Anyways, both girls killed the silver razorback out of frustration, but they don’t know how to use this boar because c’mon, they can’t just gave the boar carcass to Naofumi. 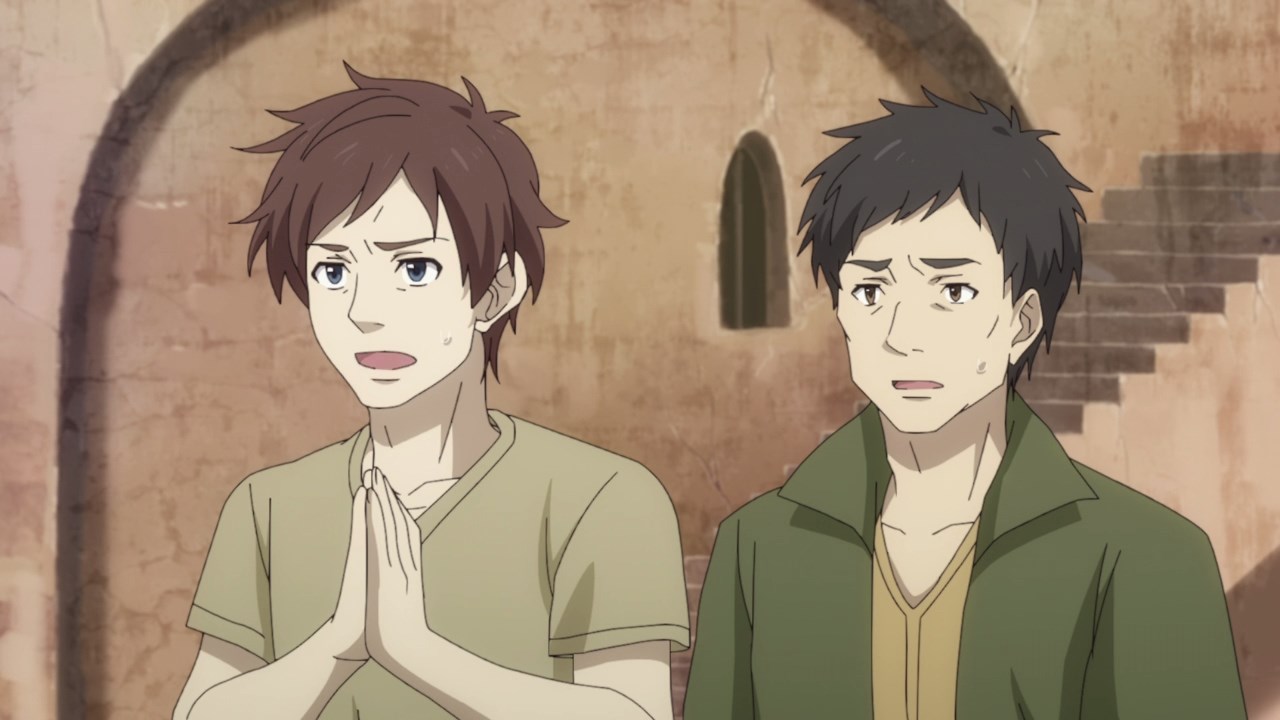 That’s until two men approached both Raphtalia and Filo as they want to take the silver razorback because it’s not only a delicacy, but also valuable prey when useds as ritual offerings.

Oh yeah, and they have lots of money to buy that boar. Um you two, just give the silver razorback and take the money. I mean, you can use that money to buy something for Naofumi. 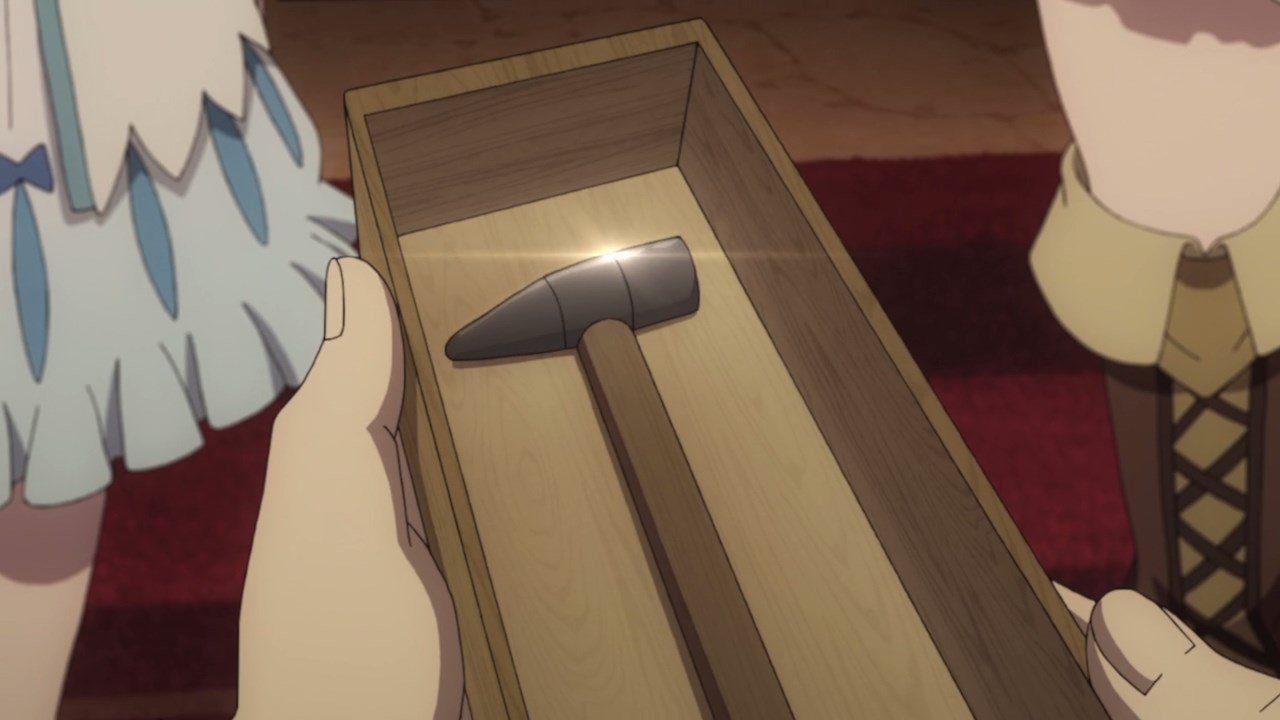 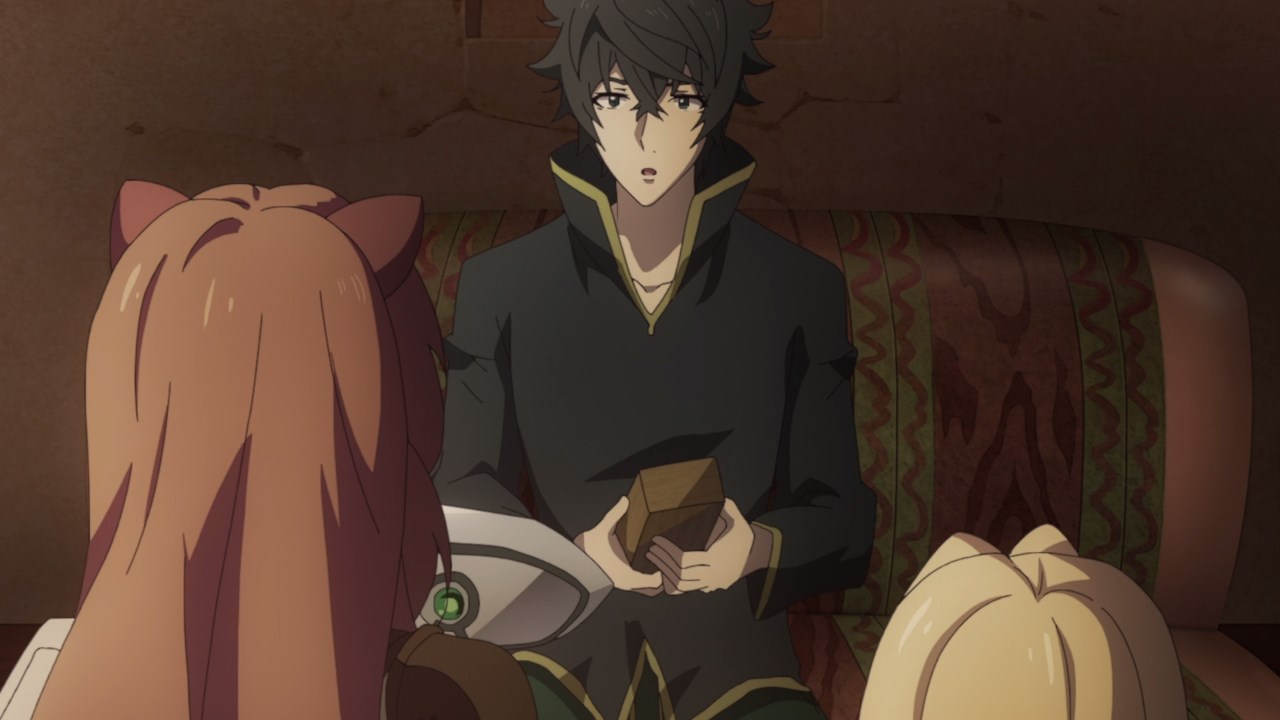 In the end, both Raphtalia and Filo used that money to buy the Shield Hero a special hammer for crafting metal tools and accessories. Perfect for him when Naofumi wants to create high-quality goods and sell them at a reasonable price.

In any case, that’s about it for this week’s episode as Naofumi and his party are heading east… 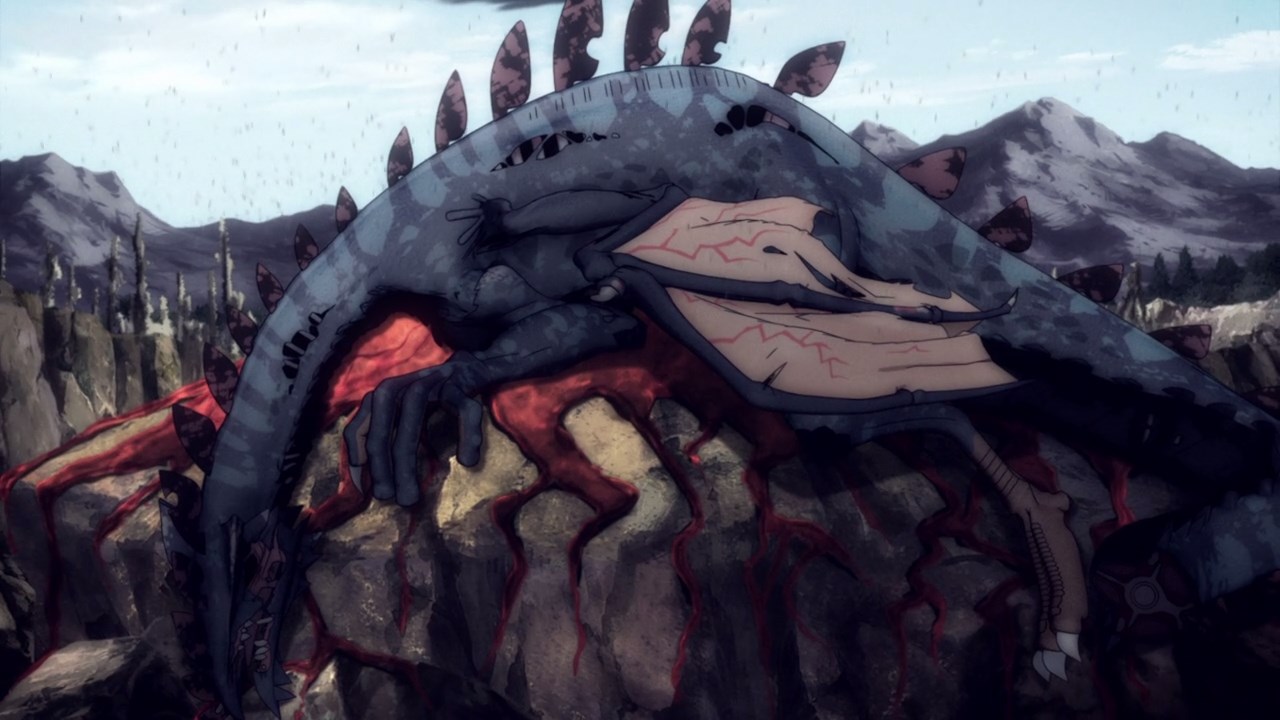 That’s because something serious has happened there. As you can see, all of the adventurers are having a hard time taking this dragon out. And if they did, there is some consequences for it.

You know, I have a bad feeling that someone killed this dragon before, only to resurrect from the dead and become stronger than ever. Well then, can’t wait for that!