The Rising of the Shield Hero Episode #08 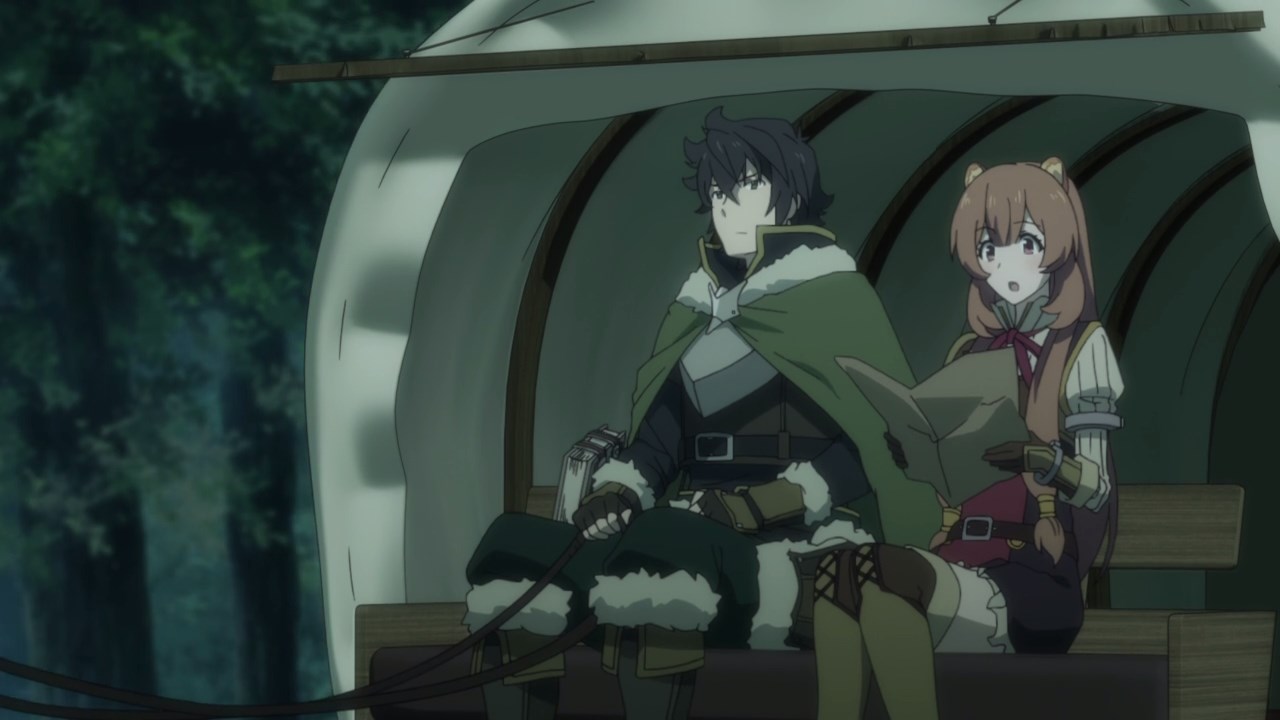 On this episode, Naofumi Iwatani and his party are heading towards east as the Shield Hero heard that a village got afflicted by a mysterious plague. Of course, Naofumi won’t know the cause of that plague until he found it out by himself. 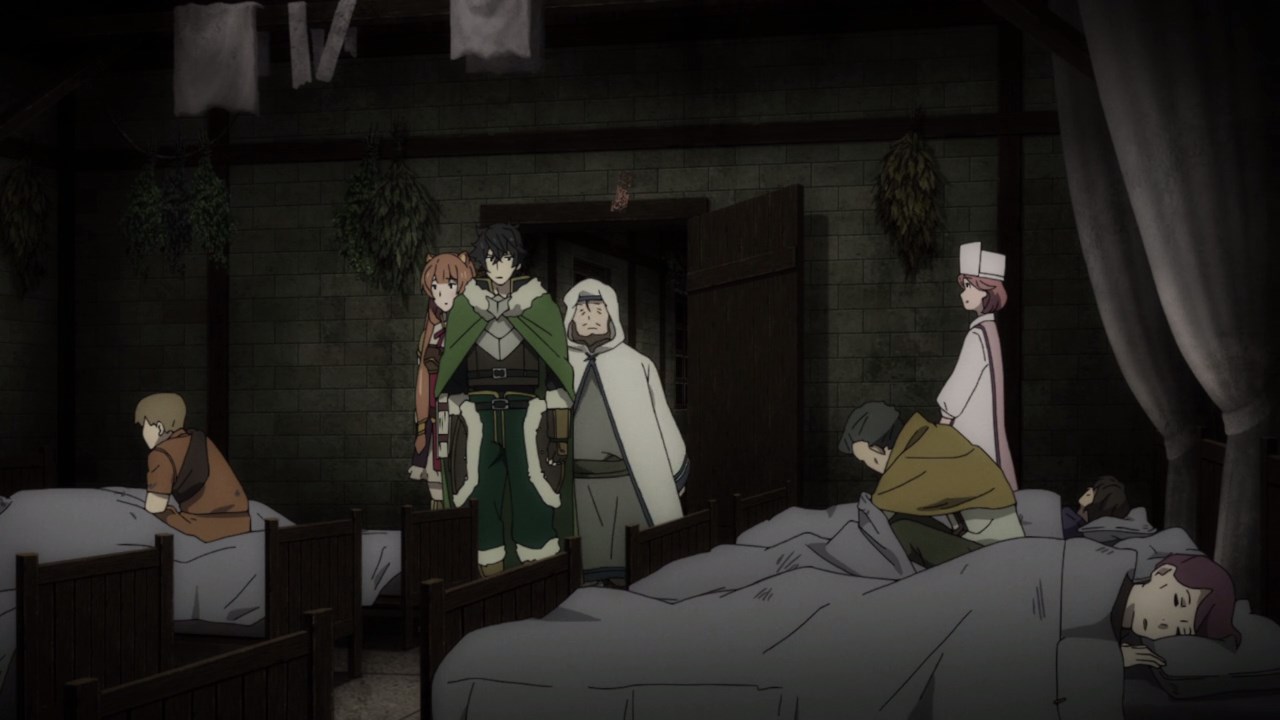 In any case, the Shield Hero and his party went to the village, only to find out that everyone are bed-ridden because of the plague. Even the doctor and his nurse couldn’t do anything to stop the plague. 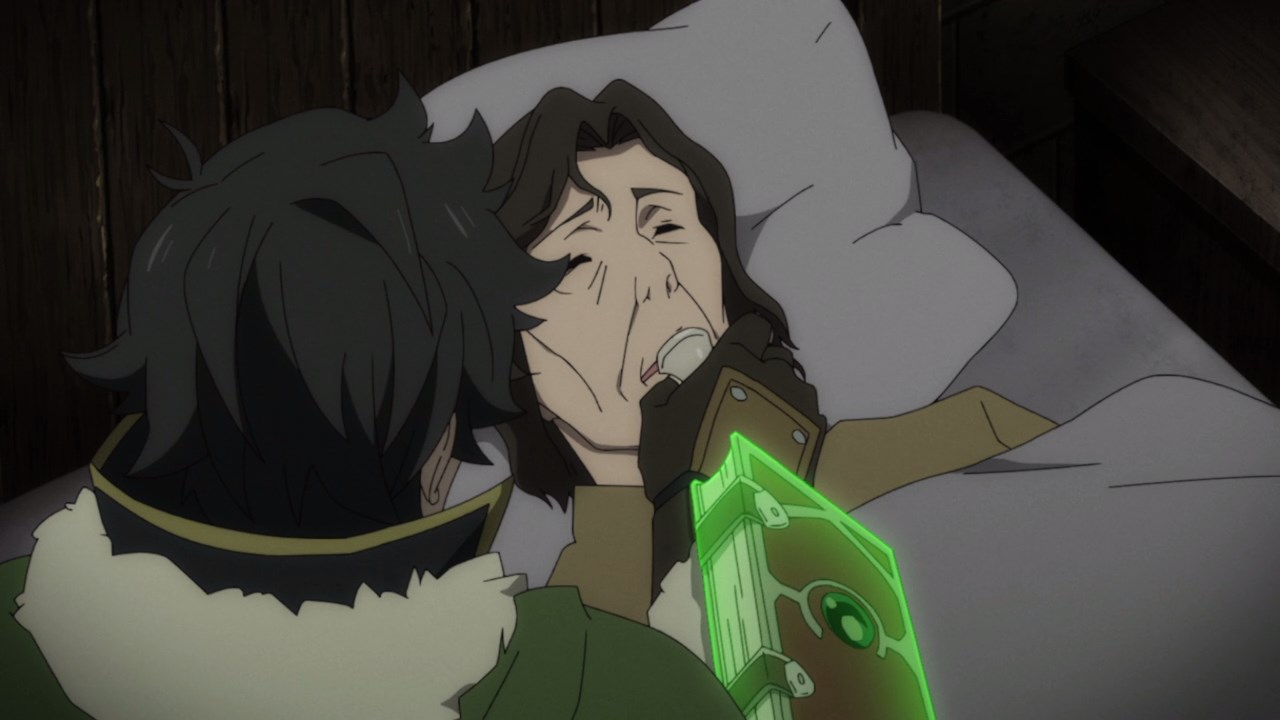 And also, it seems that Naofumi’s potions are not effective at curing the plague, even as far as enhancing his potions with magic. So, what caused this plague to befall on this village?

Well, the village doctor explained to Naofumi that it was caused by a dragon, or rather its carcass after the Sword Hero left it rot once he’s done slaying the dragon. Coupled with Ren Amagi’s thinking that the dragon will despawn because c’mon, he’s acting on video game logic, the result is that villagers and adventurers are having a hard time disposing the dragon because they couldn’t stand the foul smell of its corpse.

You know what, I’m baffled by Ren’s thinking and while I’m not surprised there given that he perceives the entire Melromarc Kingdom and its surrounding as a video game, Ren should have some common sense that leaving trash is not good for the environment, be it food waste or dragon carcasses. 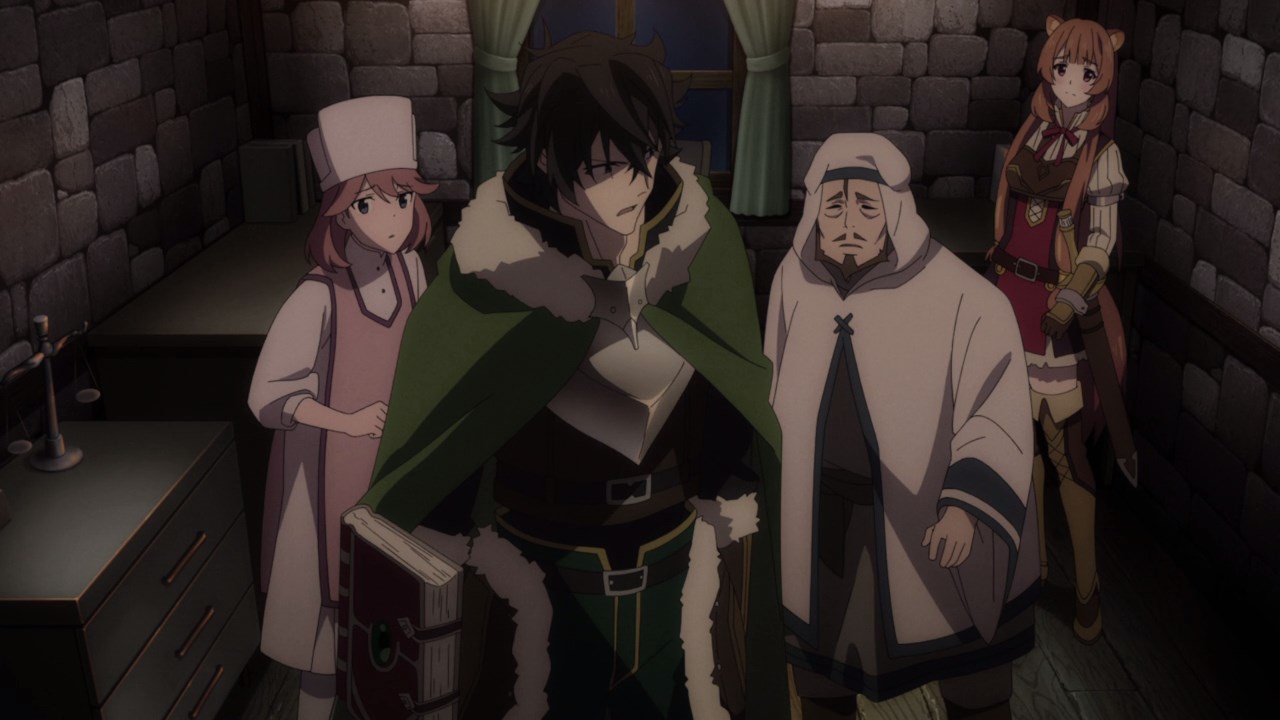 With that said, Naofumi will take the disposal job, but he told them that it comes at a hefty price since it’s very hazardous.

And sure that some people will find it absurb that they’ll have to pay a huge amount just to dispose the dragon corpse, Naofumi said that because he doesn’t want everyone think that he’s the savior. After all, the Melromarc Kingdom hated Naofumi for just being the Shield Hero. 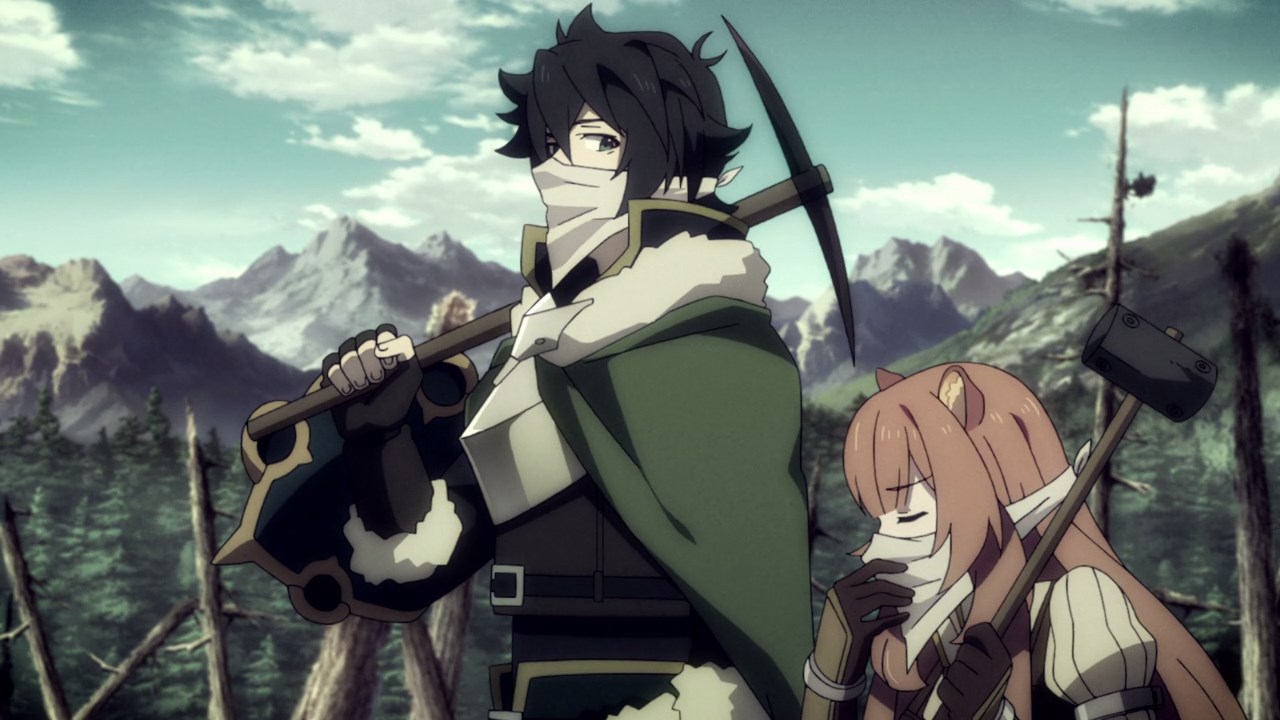 In any case, time for Naofumi and Raphtalia to dispose the dragon corpse by themselves, although they have to be careful as inhaling the nauseating stench will afflict them with poison. 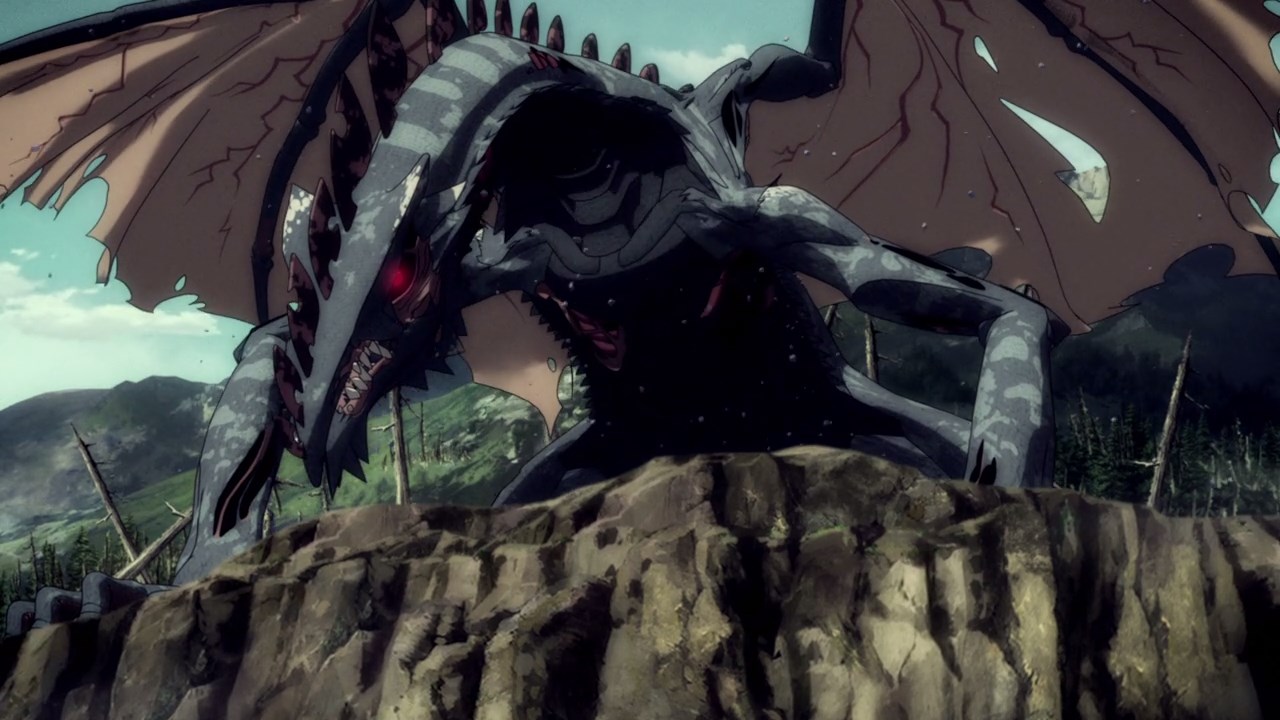 Then again, it appears that they don’t need to dispose the corpse as the dragon suddenly resurrects itself, or rather become a zombie since Ren and his party didn’t dispose them.

Well, this is getting worse for both Naofumi and Raphtalia. 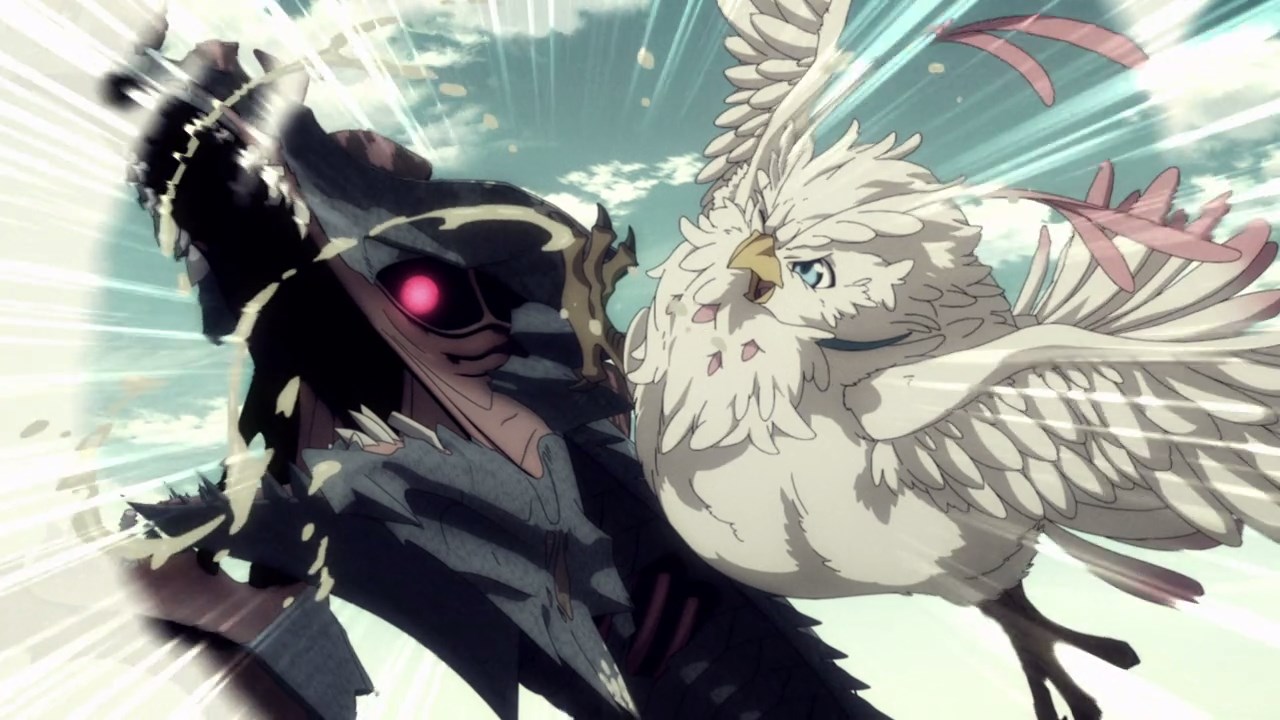 But for Filo however, she’s okay taking this zombie dragon as Filo is fired up as she considers dragons as her rival. 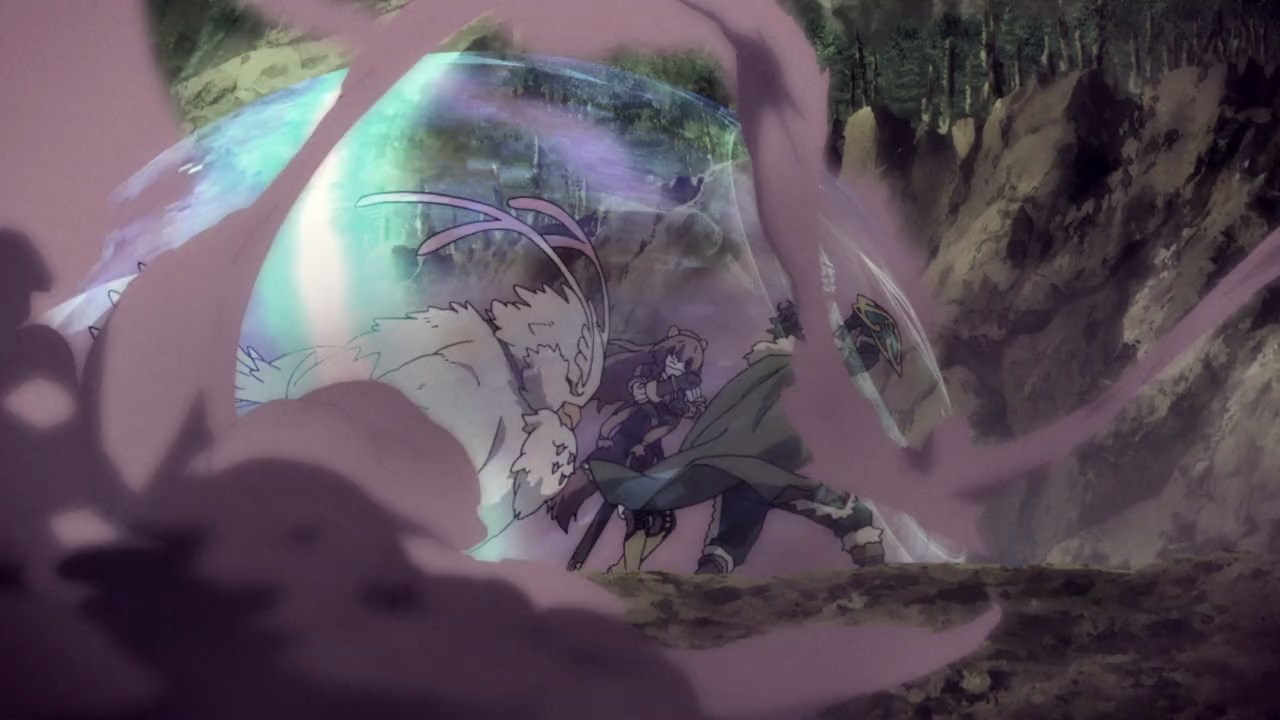 Of course, Filo needs to be careful when fighting a dragon, especially when exhaling its foul breath. And while Naofumi Iwatani can survive the poisonous breath as his shield is resistant to it… 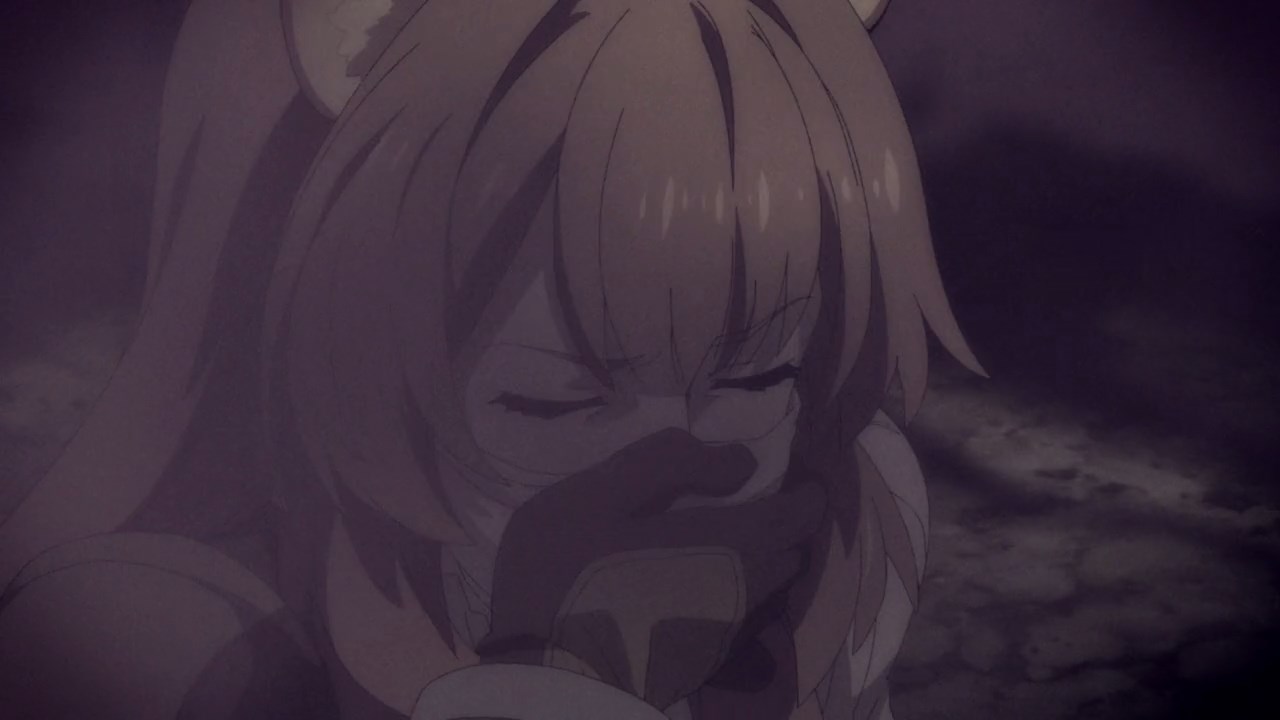 …Raphtalia is not lucky as this demi-human is not immune to poison. So if she continues to being exposed to this poison, Raphtalia might die. 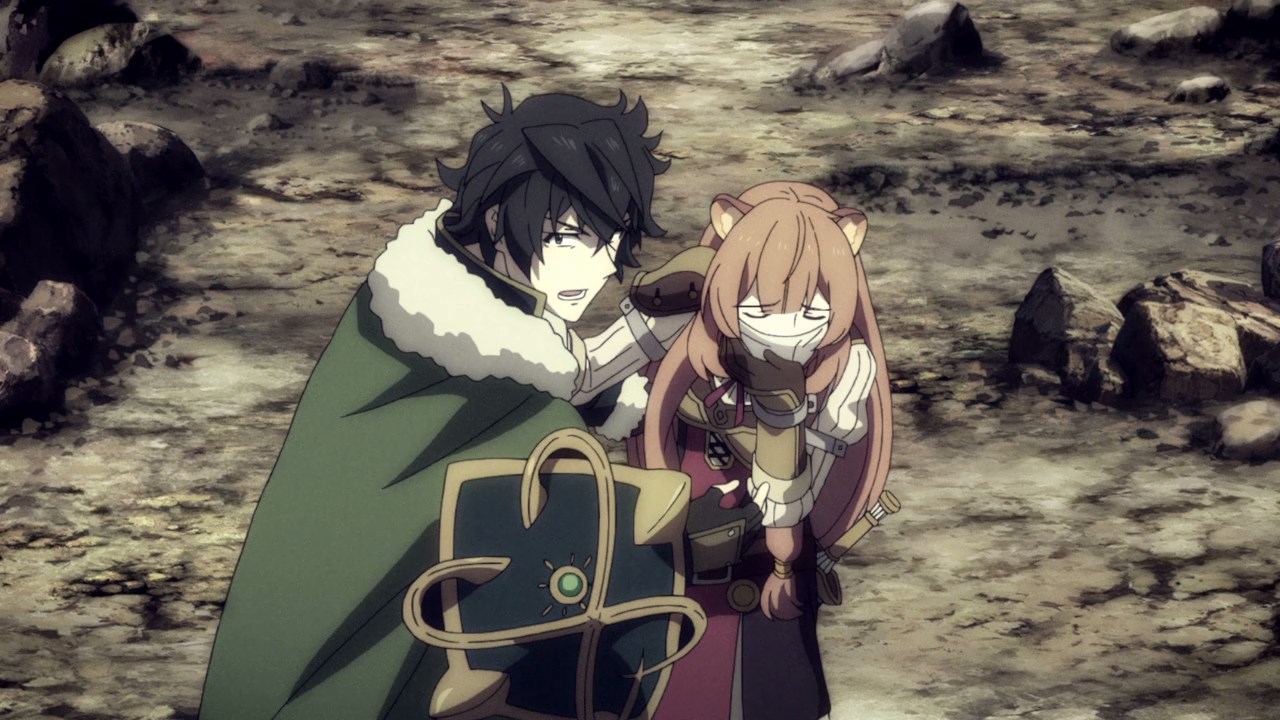 In any case, looks like it’s time for the Shield Hero to make a retreat as he and Raphtalia will have to get out of the mountains or they’ll die of being exposed to poison. 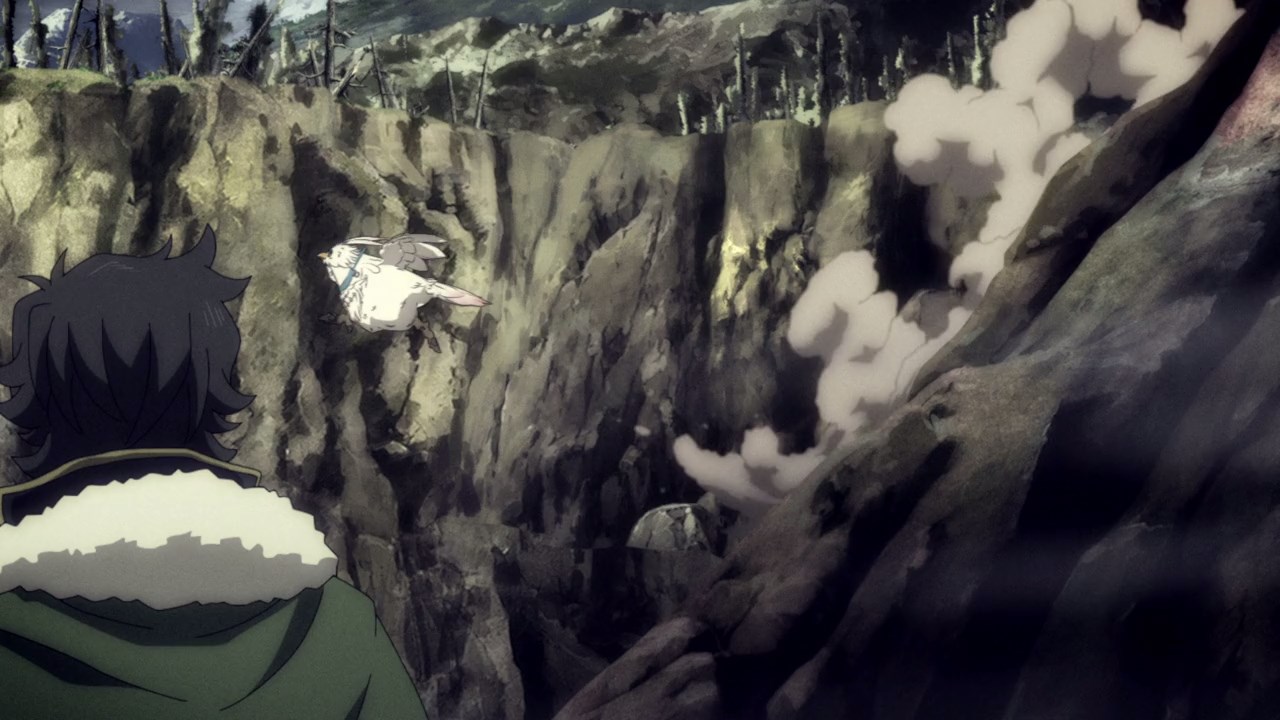 However, it seems that Filo didn’t get Naofumi’s memo as she continues to attack this dragon anyway, not knowing about the risks involved. 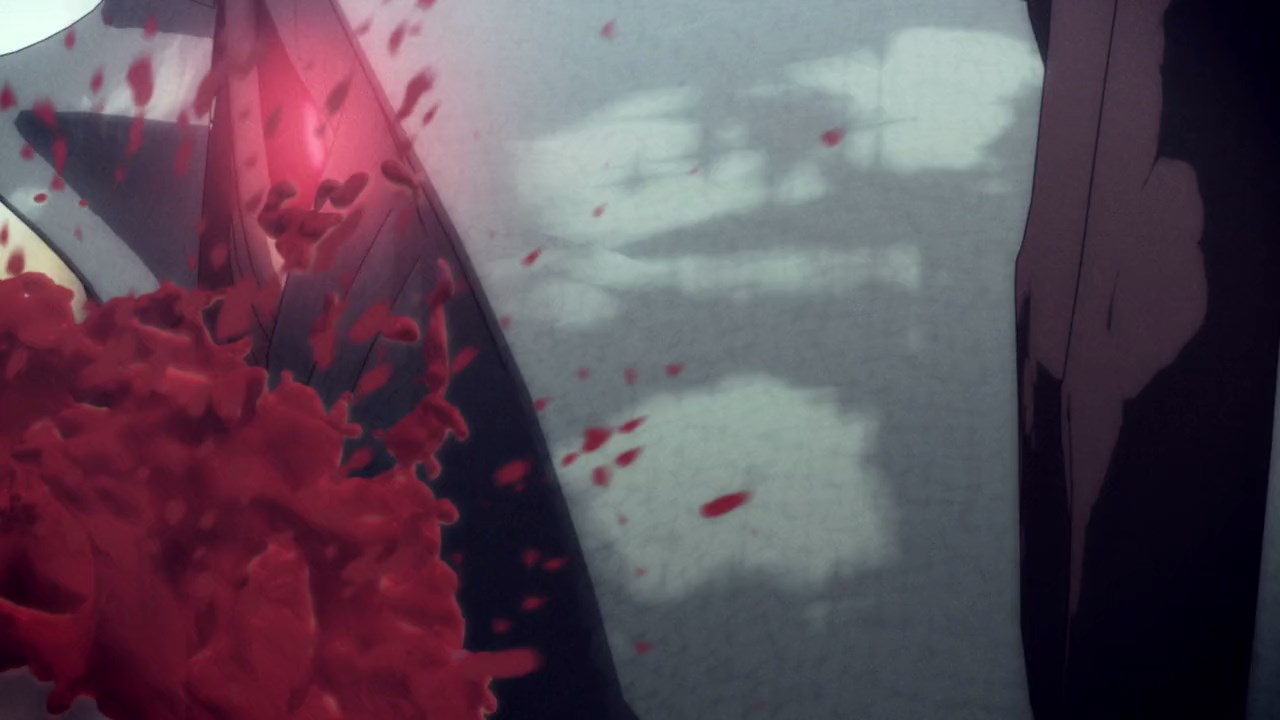 And by the time Filo noticed Naofumi calling on her, she got eaten by the zombie dragon. No, say it ain’t so for this filolial! 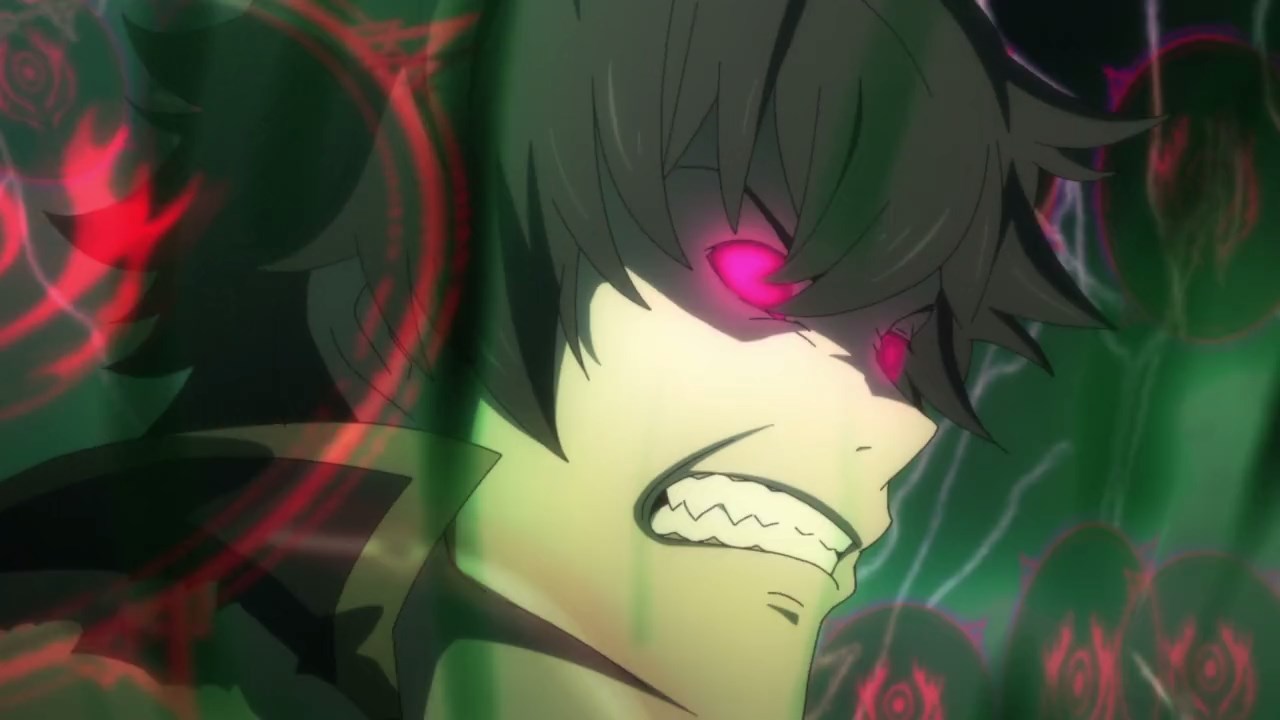 For Naofumi Iwatani, it appears that he’s getting angry again after seeing another traumatic event.

Oh yeah and remember what happened back in Episode 4 where he lost to Motoyasu? That was the last straw for him as Naofumi’s defeat has triggered a dangerous power called the Curse Series. 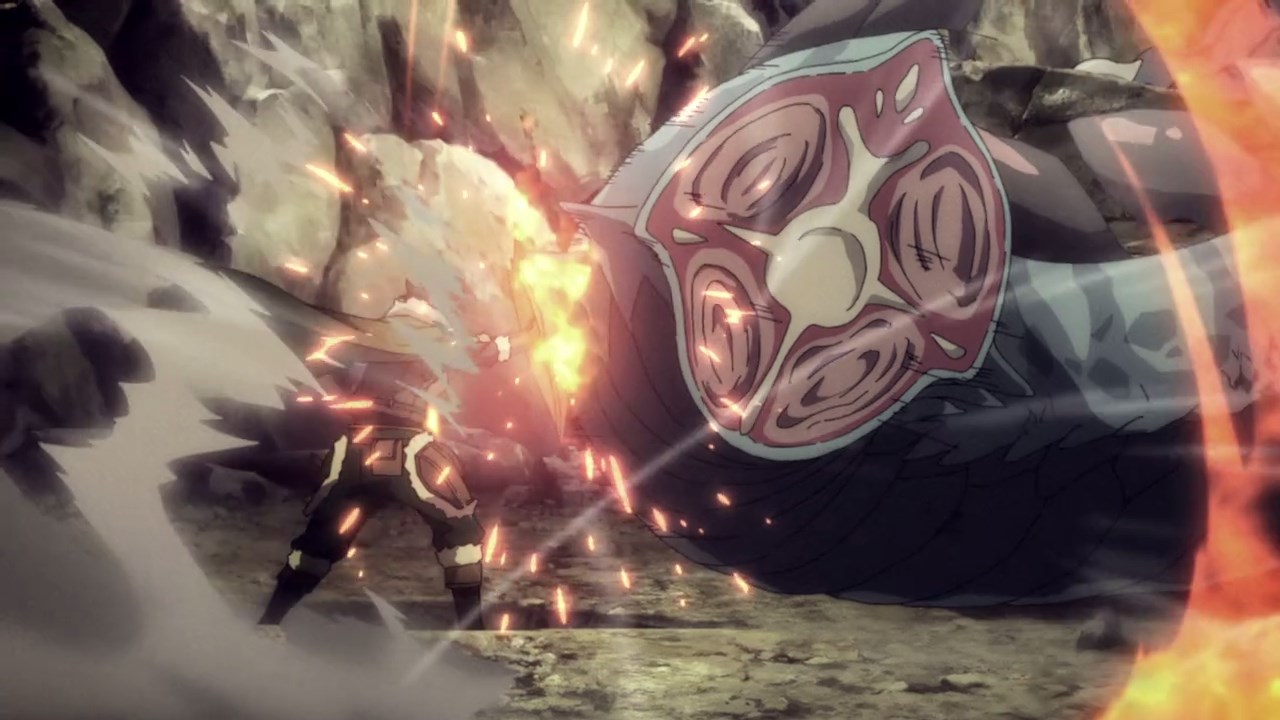 This power has the side effect of losing the hero’s sanity, but what Naofumi gets is that his shield can catch fire and burn the zombie dragon. 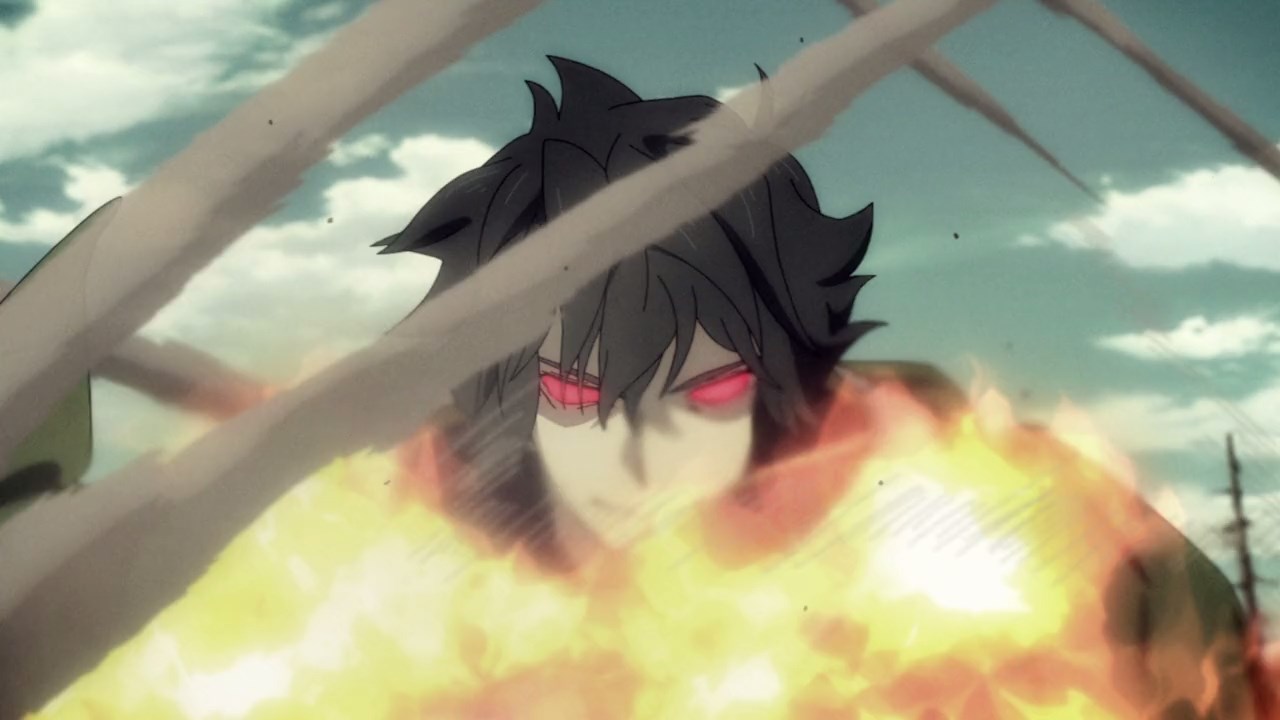 Of course, his power is just the tip of the iceberg as the Curse Series has more in store for Naofumi. For now, the Shield Hero wants that zombie dragon to burn into a crisp and really, you don’t want to mess him! 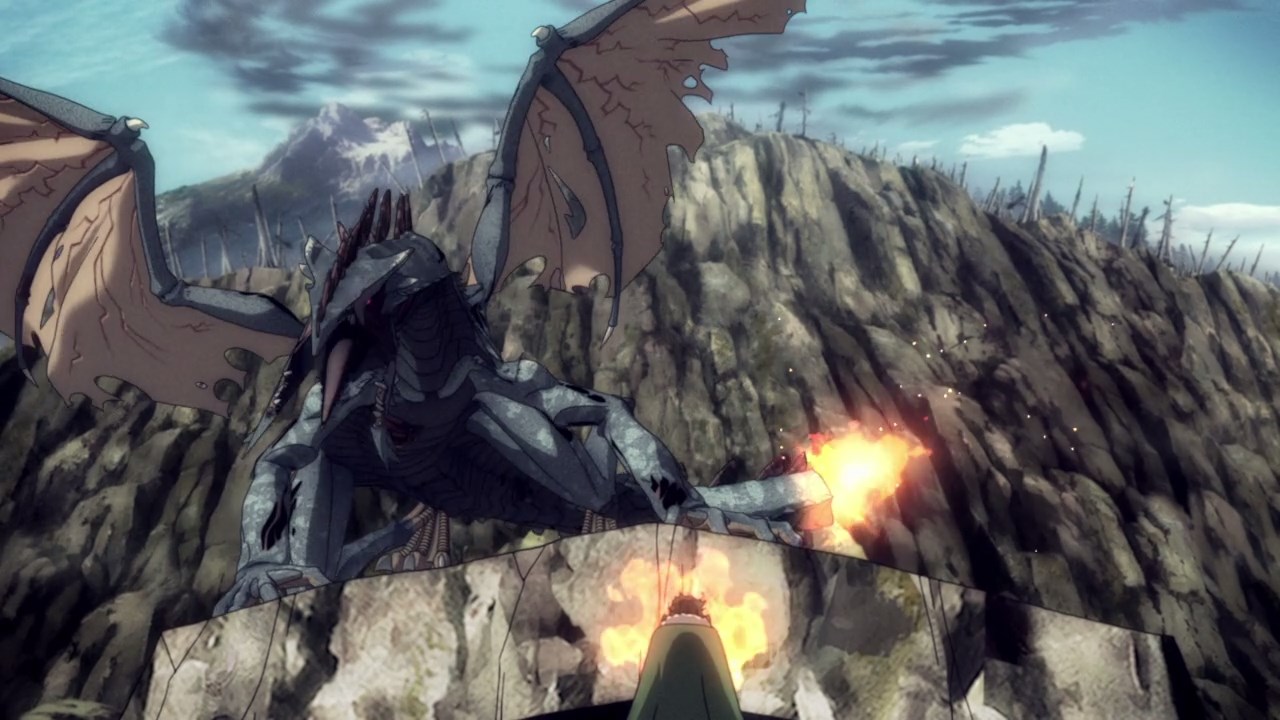 And as for the zombie dragon, looks like its tail caught fire as the dragon will burn until it become medium rare. Then again, eating dragon meat, especially if it’s spoiled, tastes terrible and you might die if you eat tainted food. 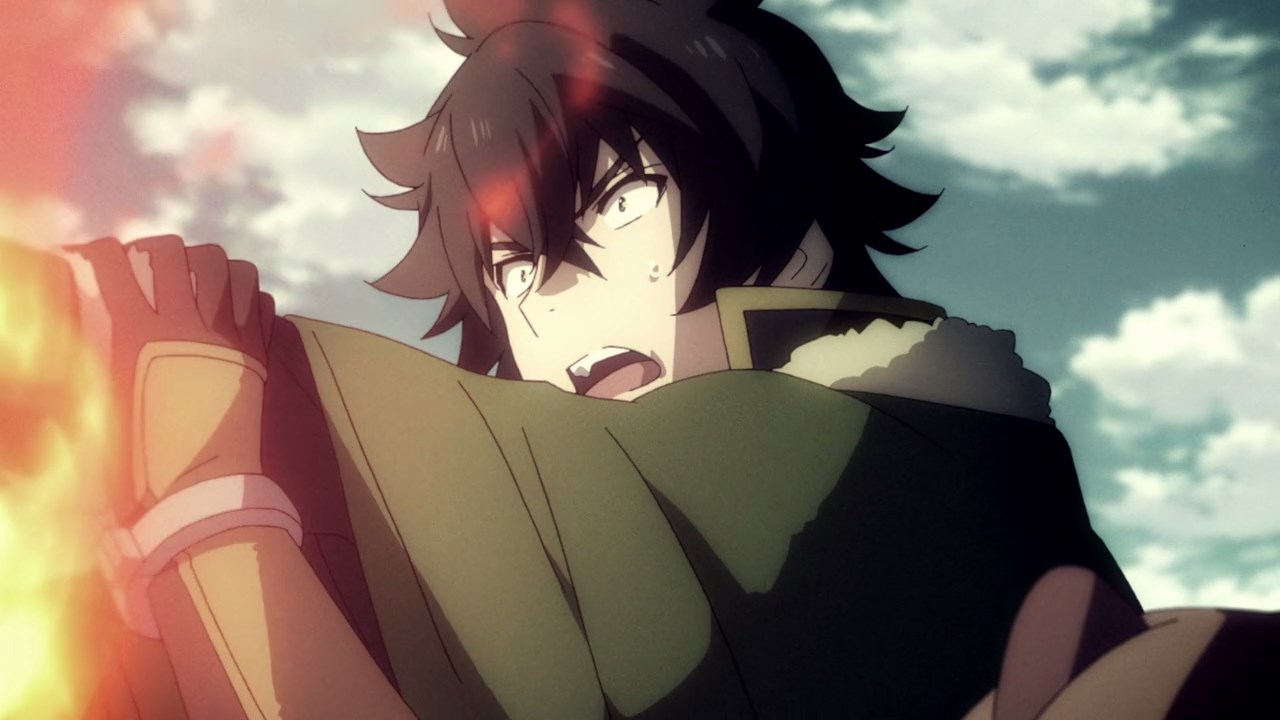 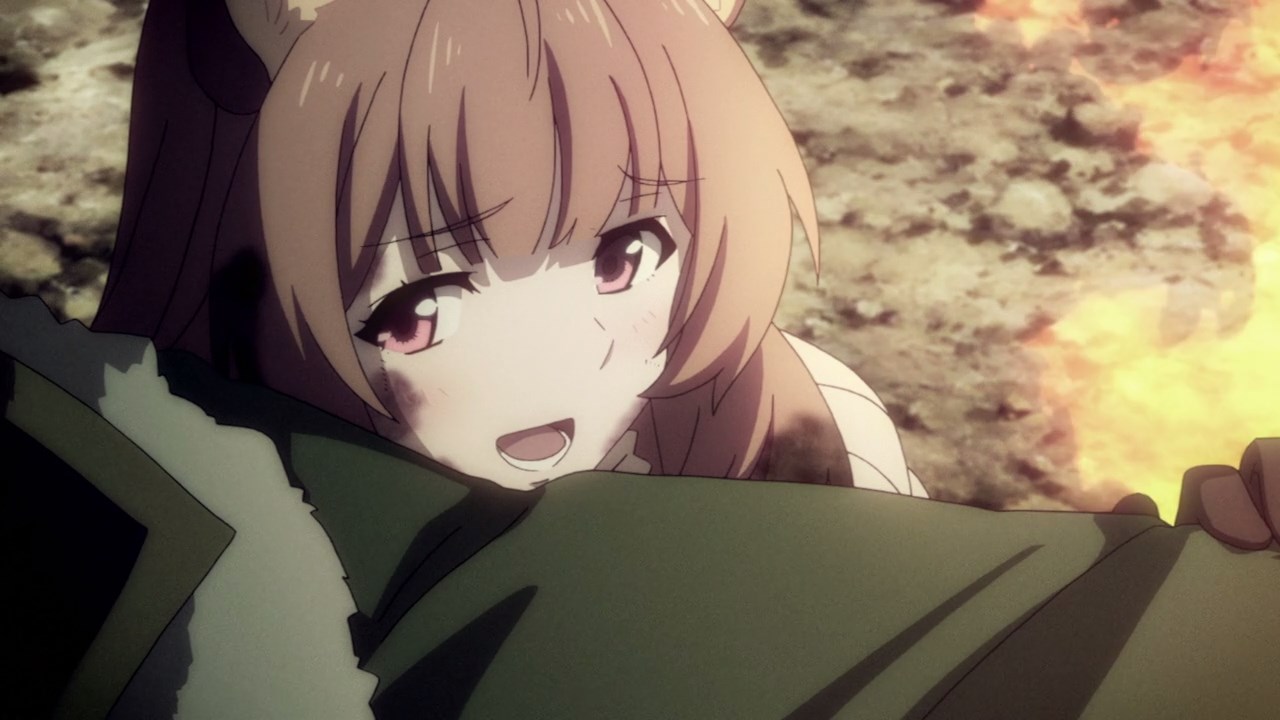 But let’s go back to Naofumi as he’s snapped back into reality when Raphtalia intervened despite being afflicted with poison. Um Naofumi, I think you should worry about saving Raphtalia’s life. 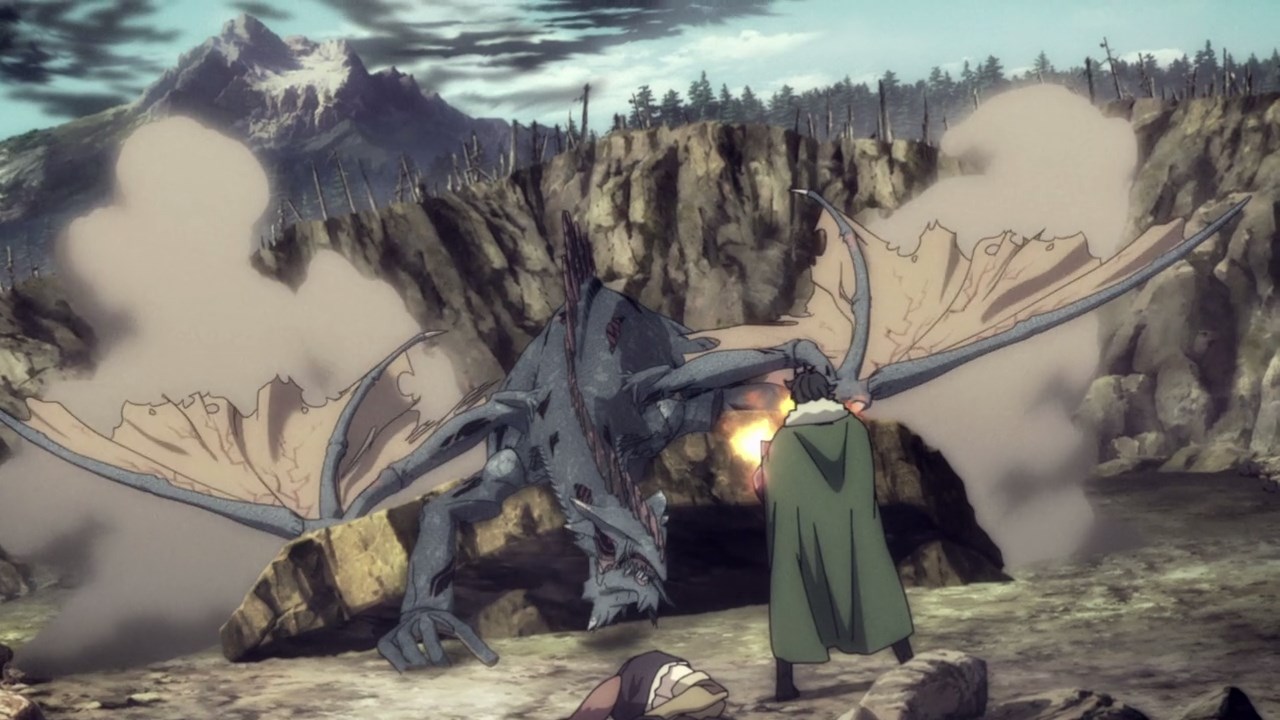 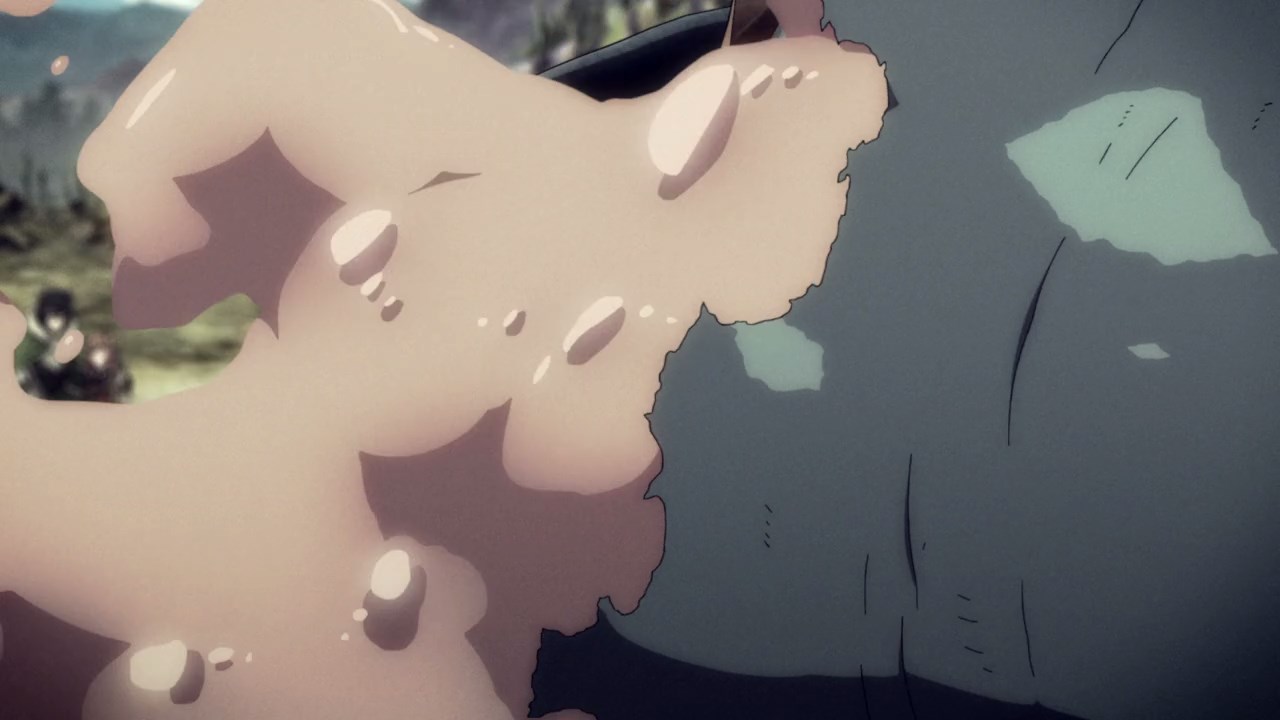 Then again, it appears that someone (or something) come out from the zombie dragon’s belly. Hmm, could it be that someone survived from being digested by a dragon? 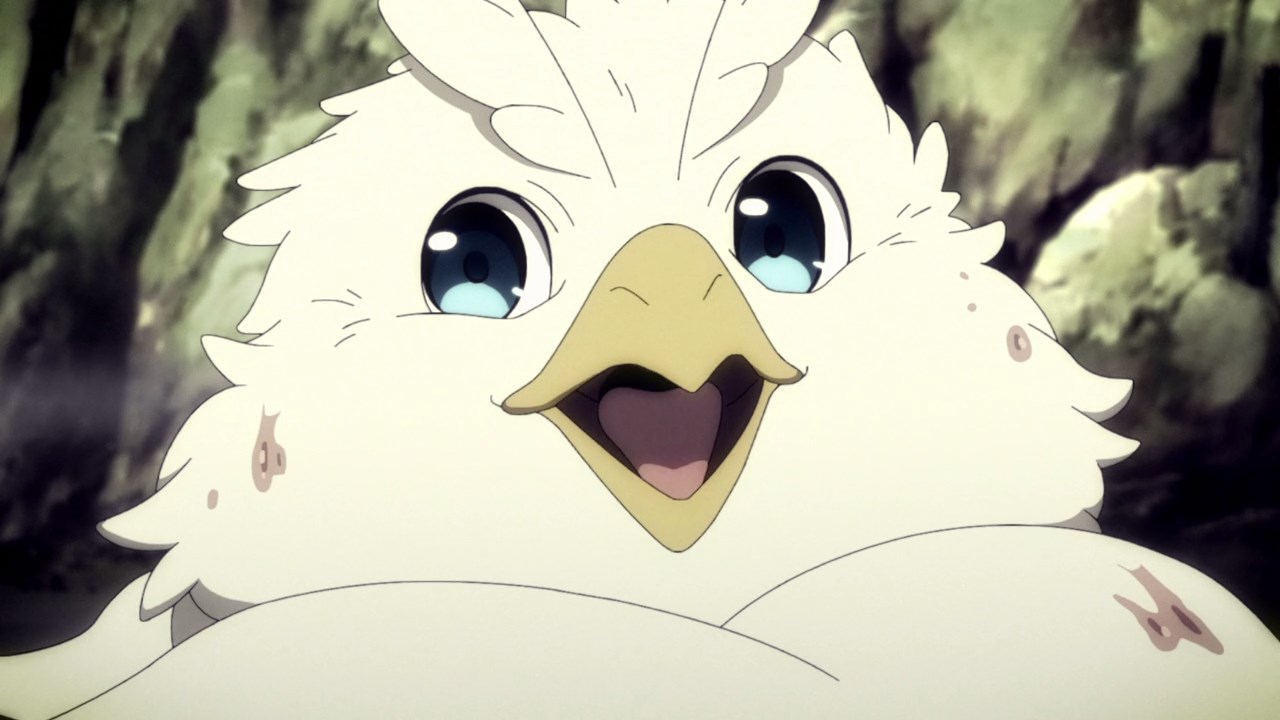 In any case, looks like the Shield Hero and his party have managed to kill the zombie dragon, but they need to dispose the corpse first so that the dragon won’t return from the dead and emit foul stench that will kill people. 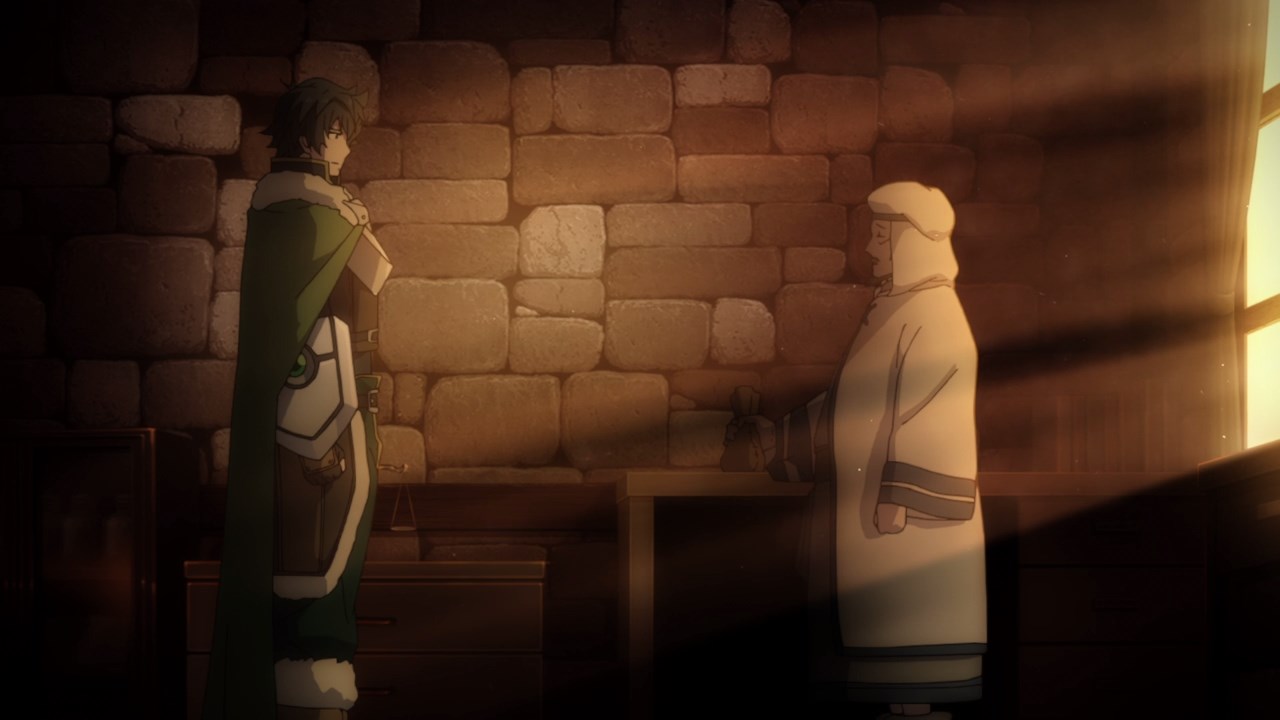 But after disposing the dragon’s corpse, there’s a problem as the doctor couldn’t heal Raphtalia simply because the poison is too strong for her. 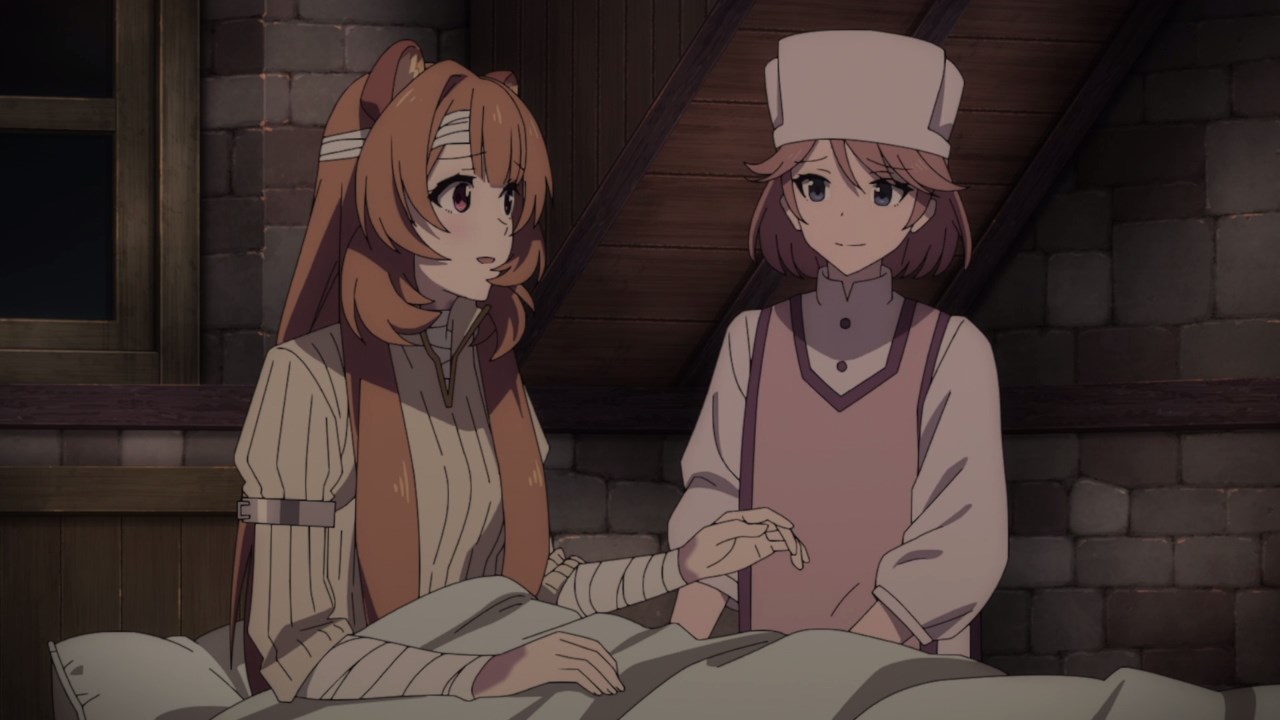 So, the only temporary solution was to cover Raphtalia with holy bandages but even then, I’m worried that the bandages won’t last long.

Until Naofumi found a doctor that is willing remove the poison, Raphtalia is in a life-or-death situation. 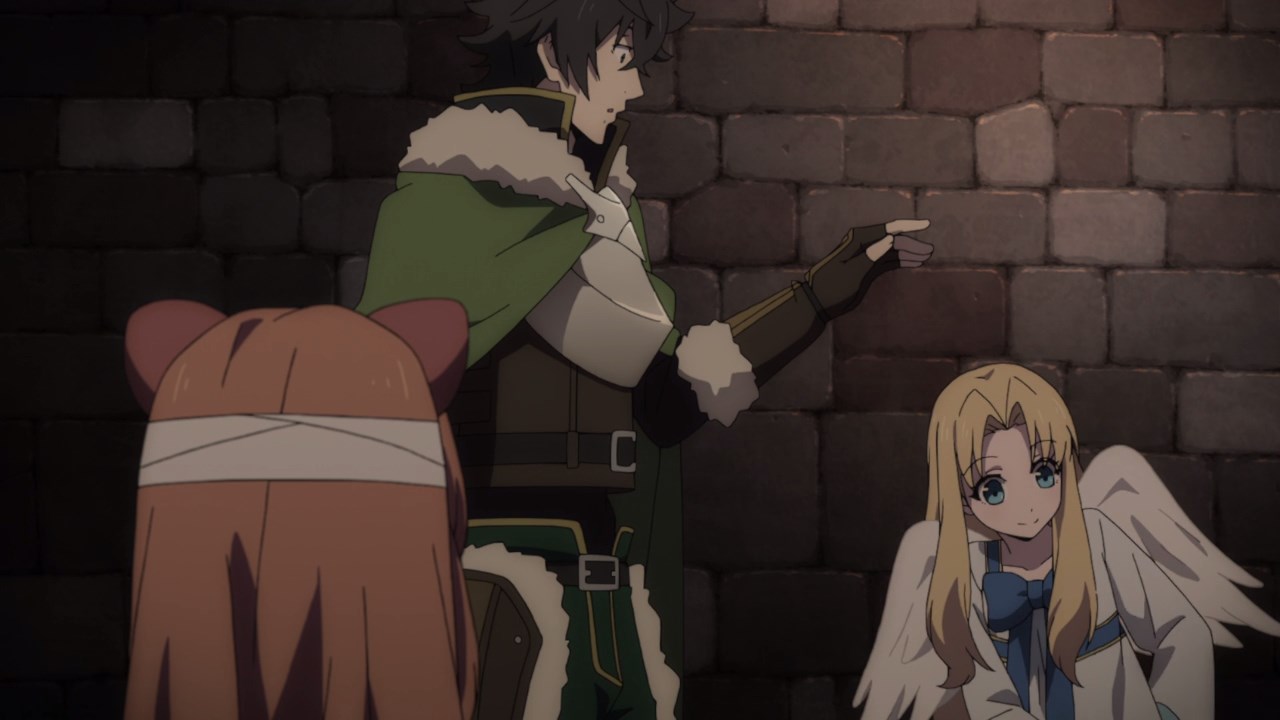 Lastly, it appears that Filo wants to give something to Naofumi in order to check it out. 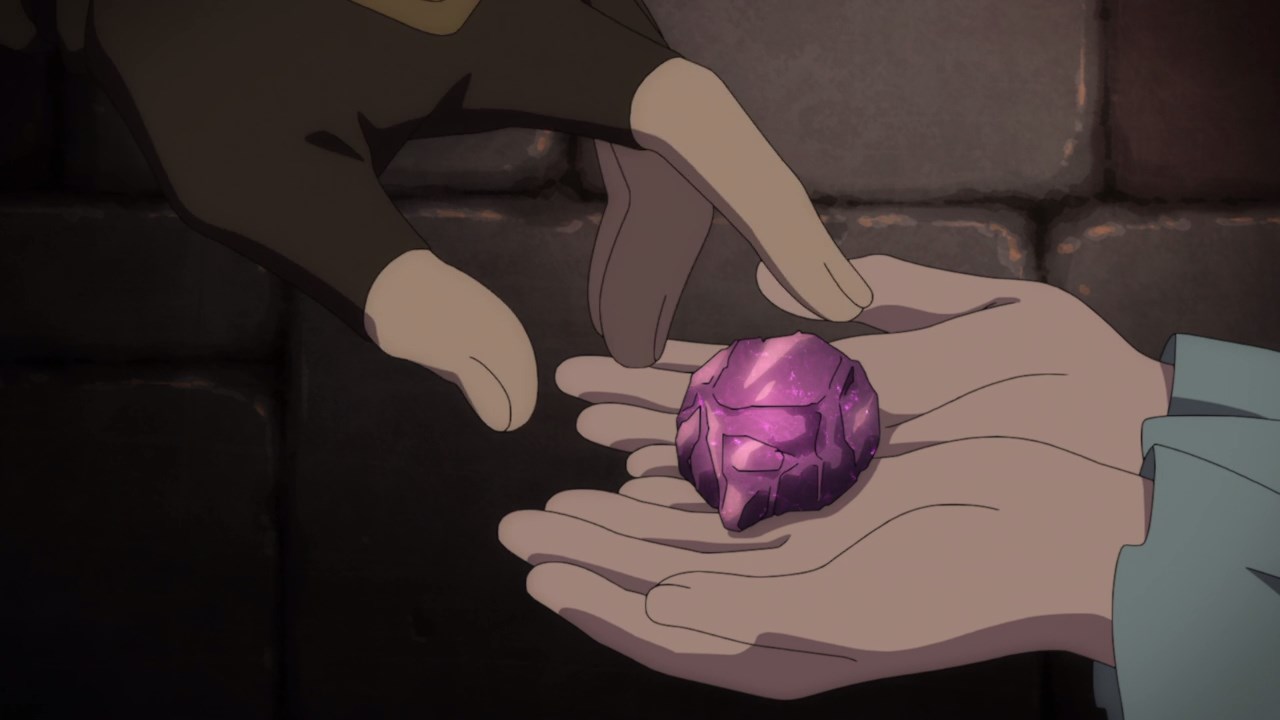 Anyways, this is a crystal that Filo got after killing the zombie dragon. Hm, I wonder if this crystal will help on curing Raphtalia? 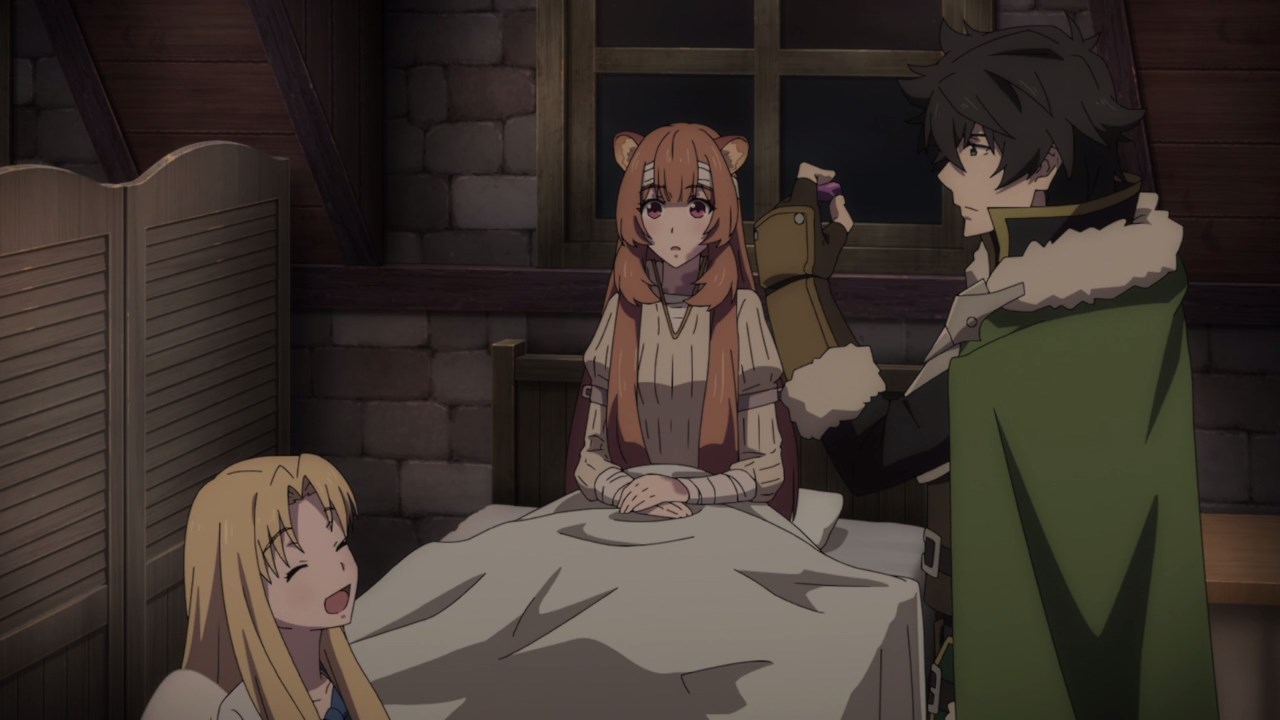 For the time being, Naofumi must find a doctor that will remove the poison from Raphtalia’s body. Even then, I doubt that anyone would lend him a hand since he’s the notorious Shield Hero.

In any case, I’ll see you next time as the search for finding a cure to Raphtalia begins!