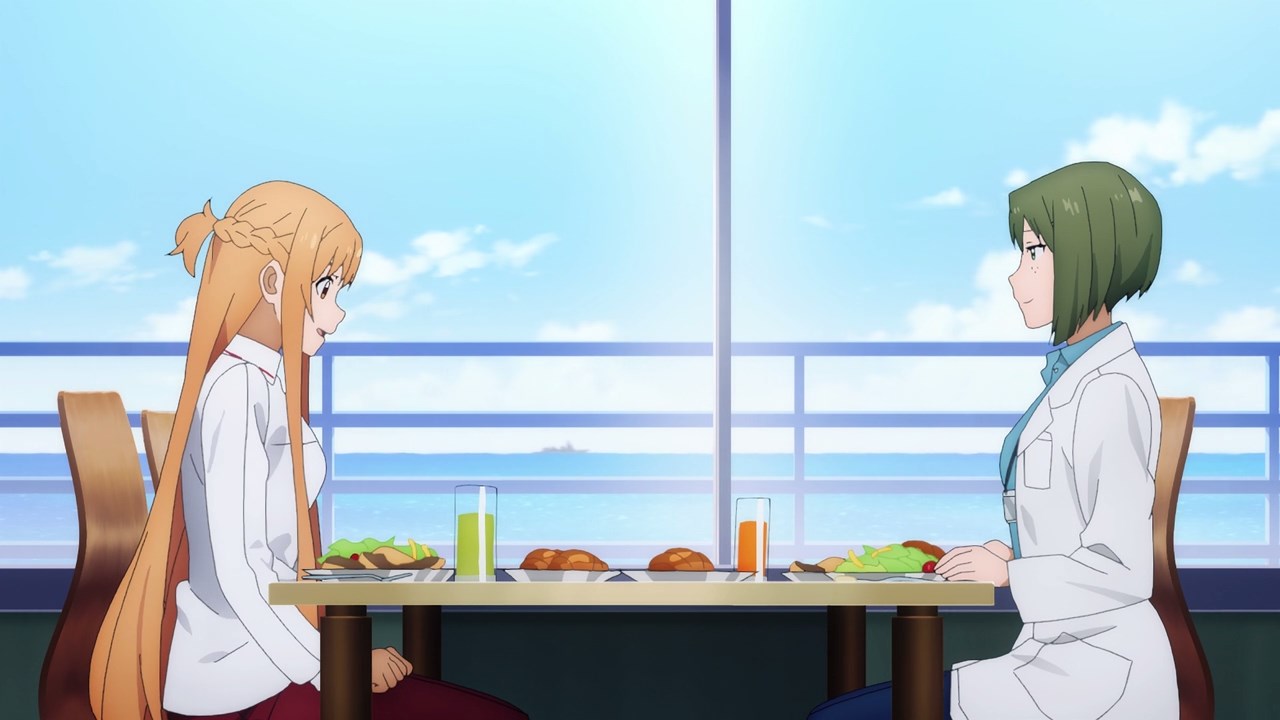 Back at Ocean Turtle, it seems that Asuna Yuuki and Rinko Koujiro are having a good time eating and chatting, while looking at the vast ocean. 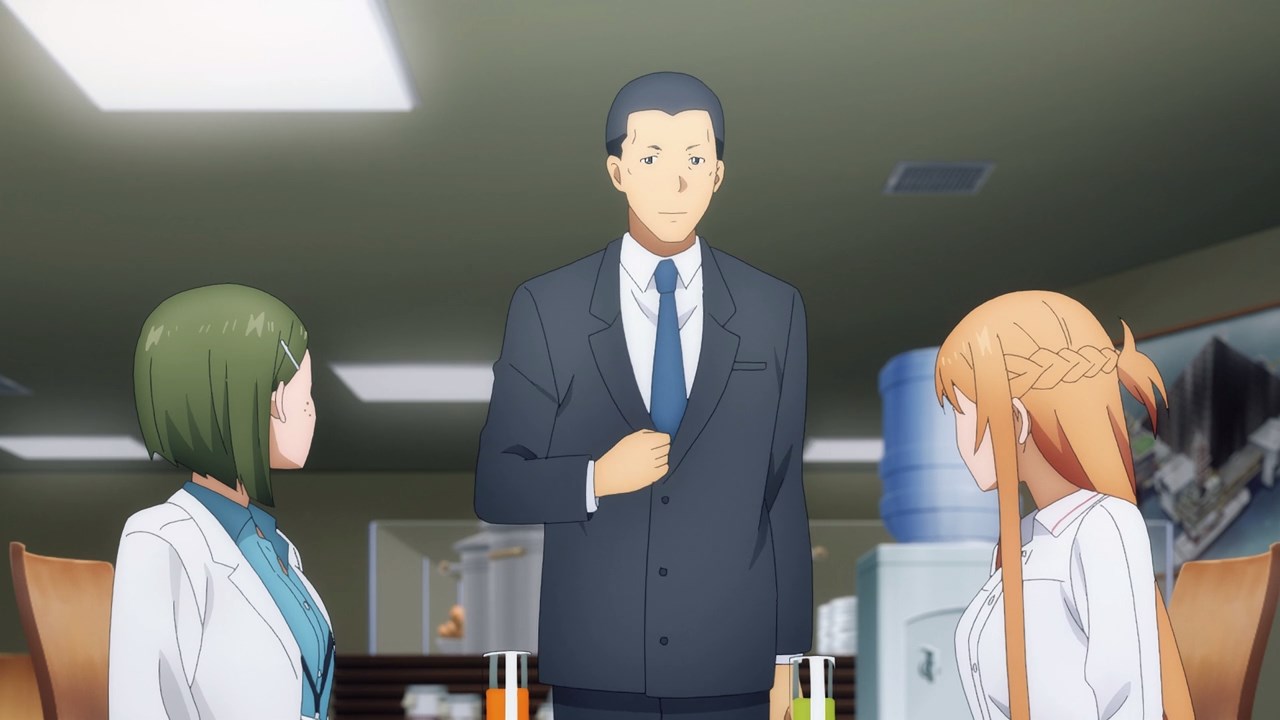 Also, here’s Nakanishi-san and while he’s not a waiter, Nakanishi is part of the Japanese Self-Defense Forces. In fact, he pointed out that the ships over the horizon are protecting Ocean Turtle as we speak. 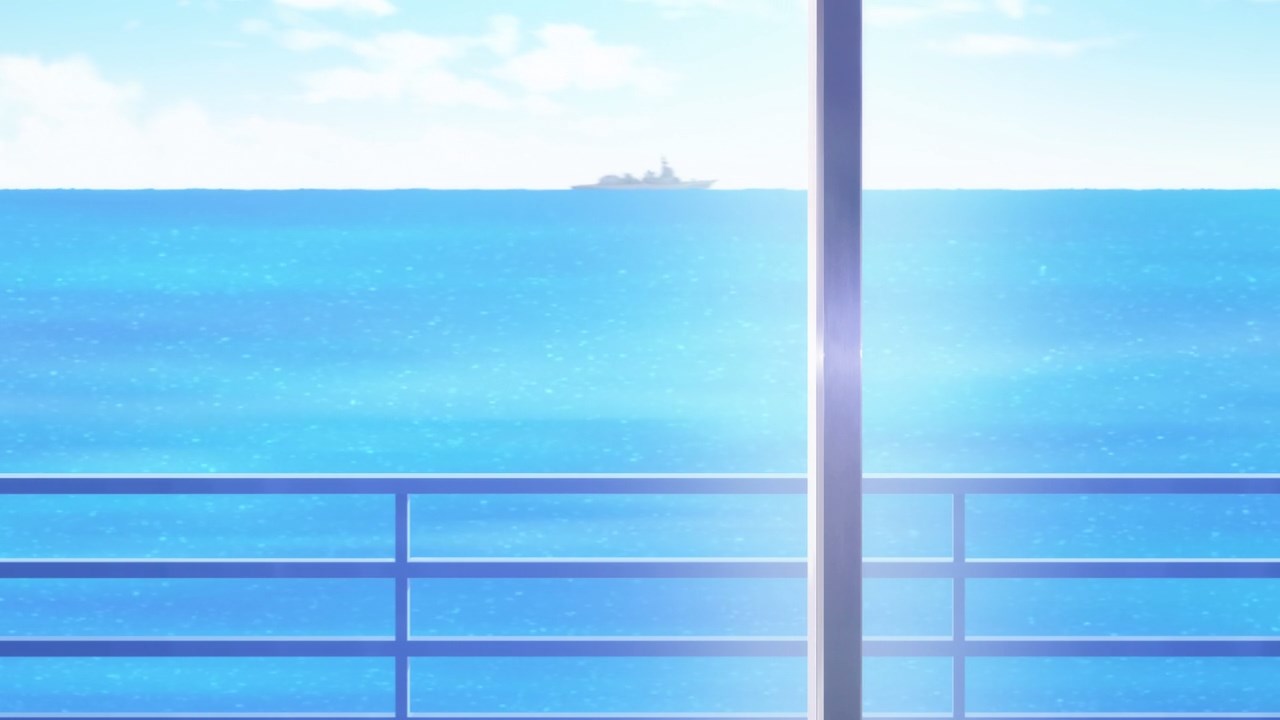 However, something strange is going on those ships as they’re veering off-course. 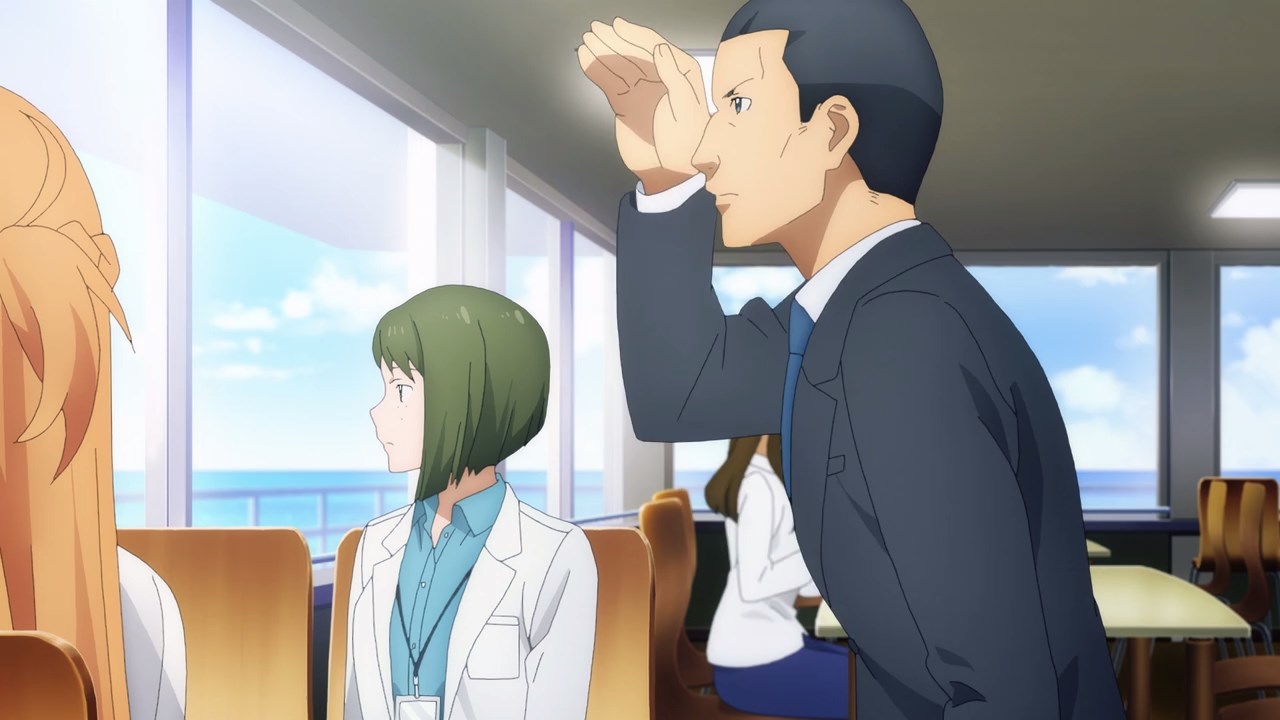 Even Nakanishi-san is concerned about it. Then again, the only thing that they need to worry is someone infiltrating the facility.

See that woman over there? I suspect that she’s a spy, ready to steal the technology for military purposes. 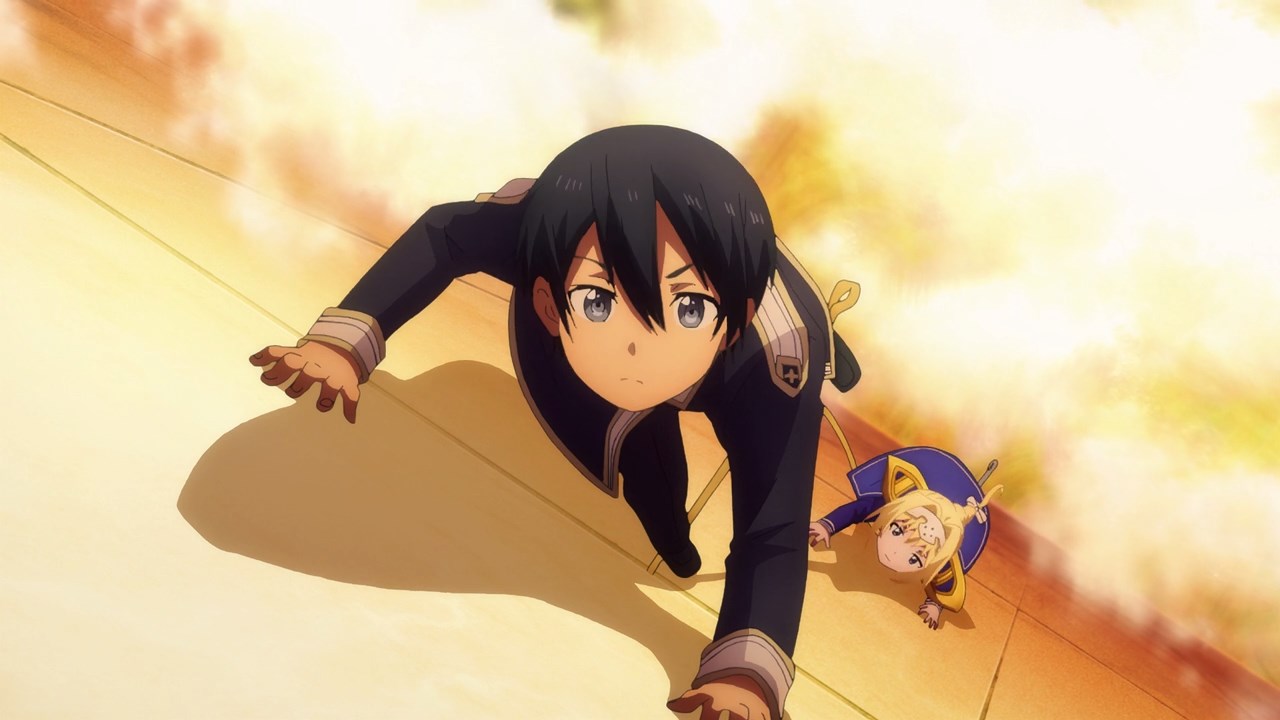 But now, let’s go back to the Underworld where Kirito and Alice are in a tight spot as they made a truce and climb to the top of Cathedral Tower, using nothing but their swords, a chain, and some stakes that they created in order to scale the walls. 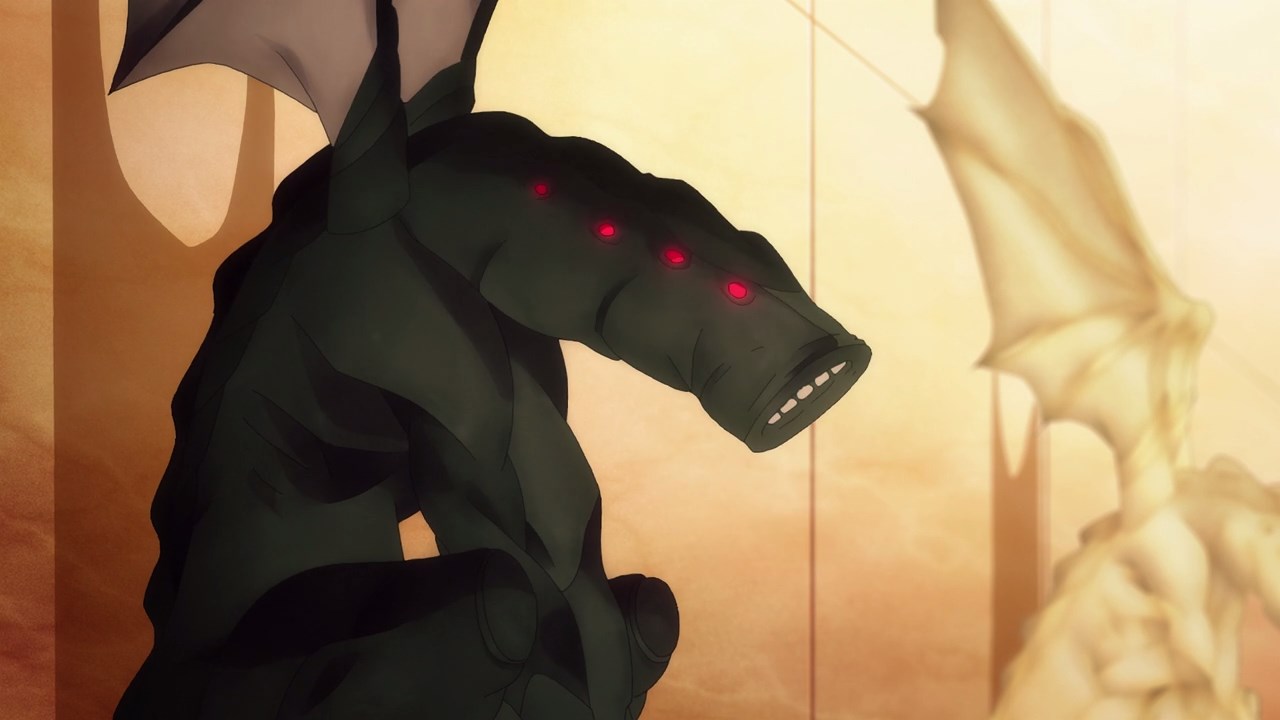 However, it appears that climbing the tower would be daunting as the outside walls are protected by these gargoyles, monsters from the Dark Territory in which the pontifex Quinella captured them for decorative purposes. 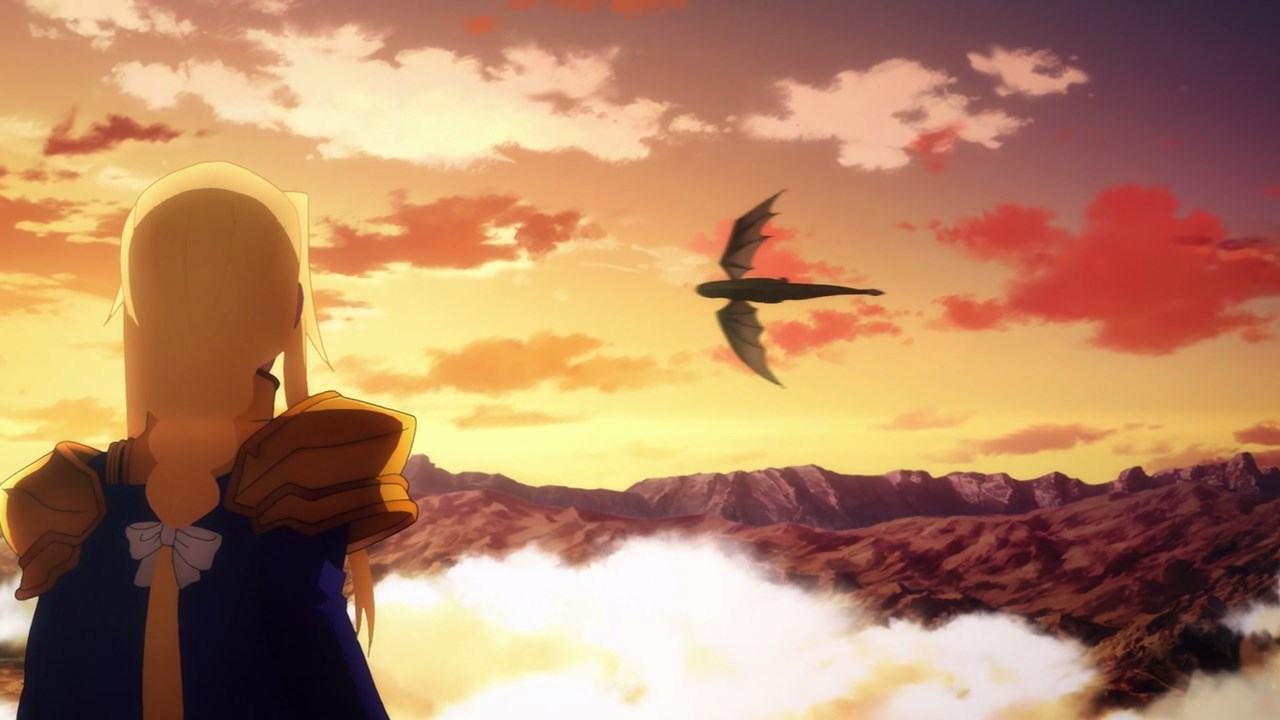 Then again, I doubt that these gargoyles can become ornaments for the Cathedral Tower because they’re menacing and they might pose a threat towards humans, especially both Alice and Kirito. 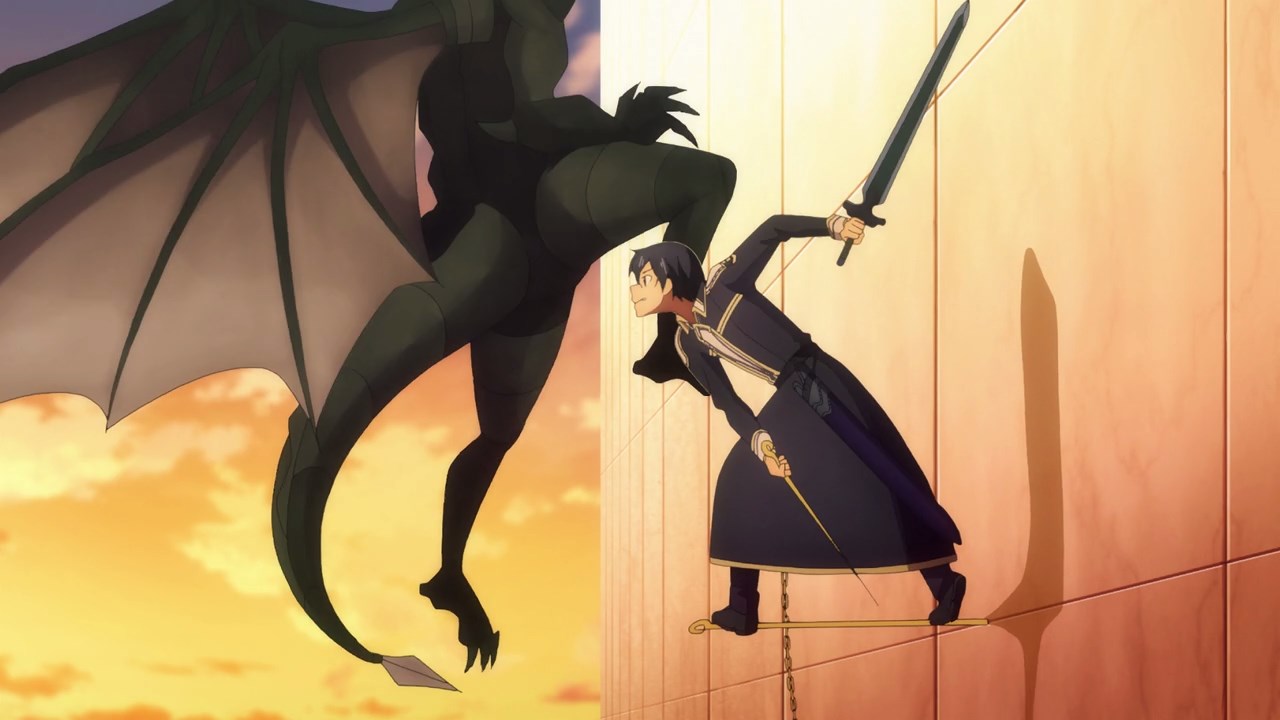 In any case, Kirito will have to fend those gargoyles off while pulling Alice up. Well, seems that the black swordsman will be busy, but what about Eugeo? 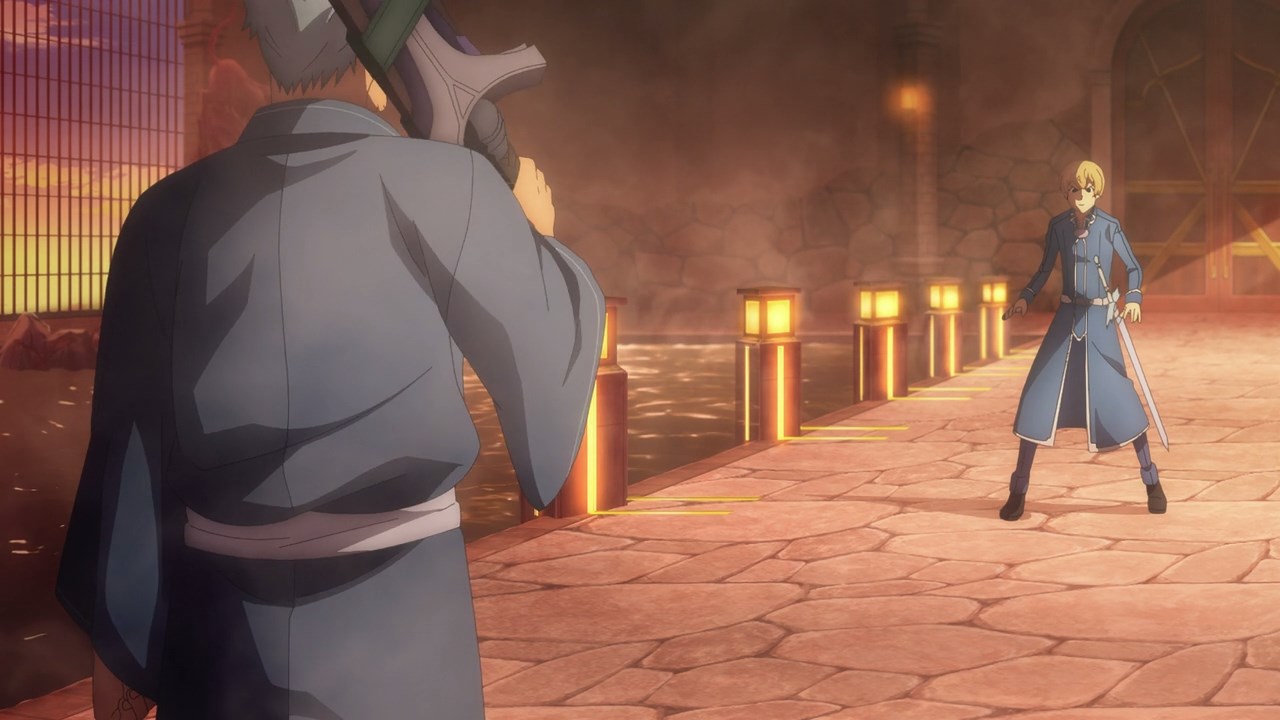 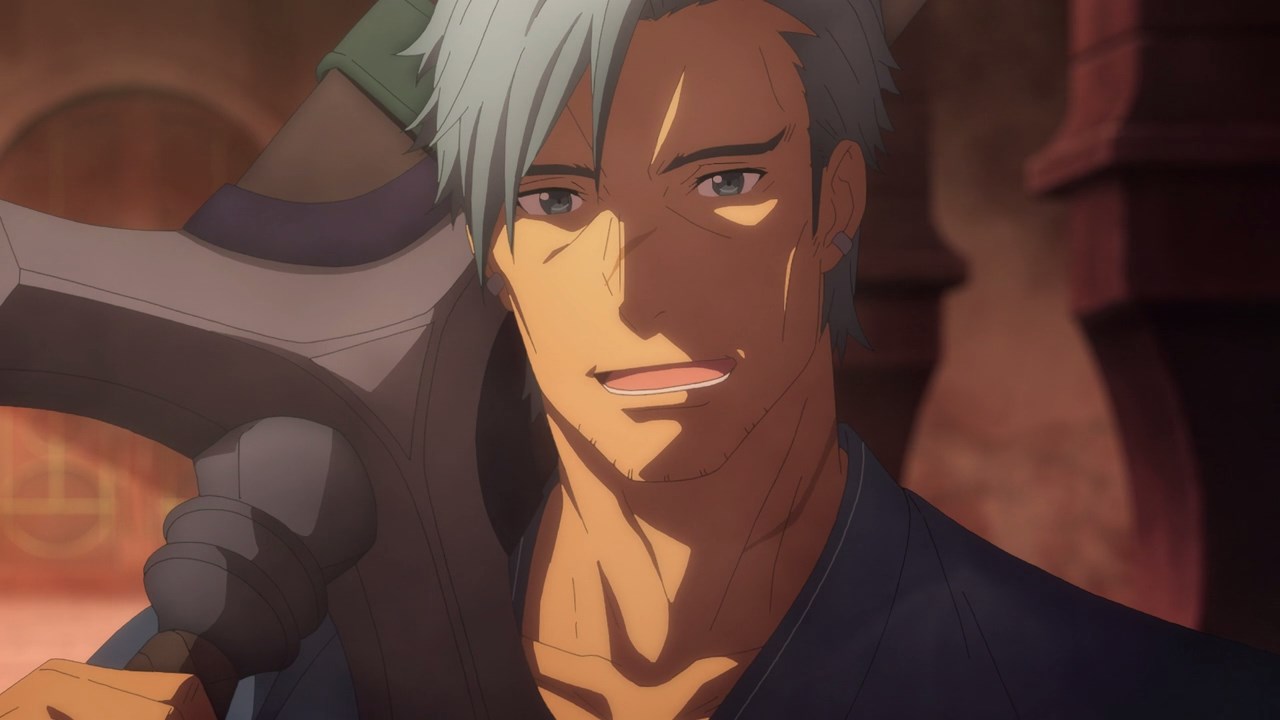 This is Bercouli Synthesis One, the leader of the Integrity Knights where he shares the name of a legendary hero from Rulid Village.

Come to think of it, this guy might be the legendary hero that slayed the white dragon many years ago. In any case, seems that Eugeo is destined to fight his idol, who is now an Integrity Knight thanks to the pontifex’s meddling of his memories. 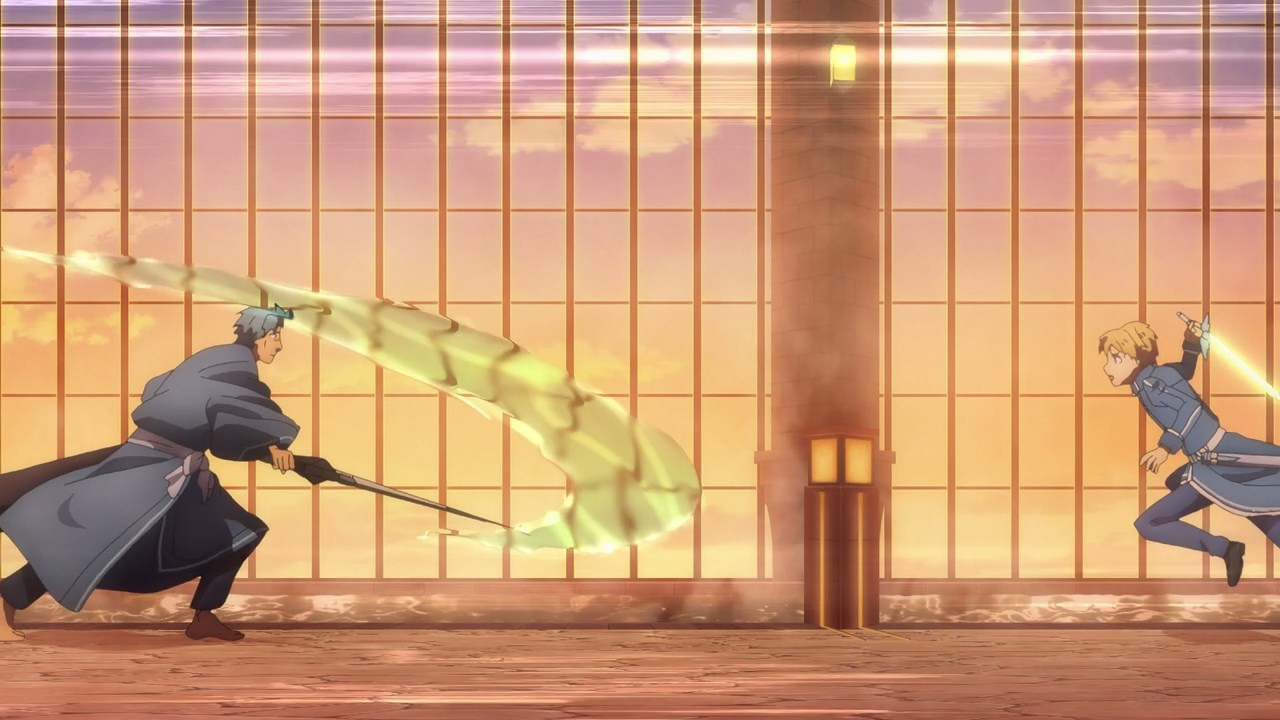 However, it appears that Bercouli has a powerful sword called the Time Piercing Sword, which was created from one of the System Clock’s hands.

As you can see, its slash just hangs in mid-air as if time was stopped, hence the name of Bercouli’s sword. 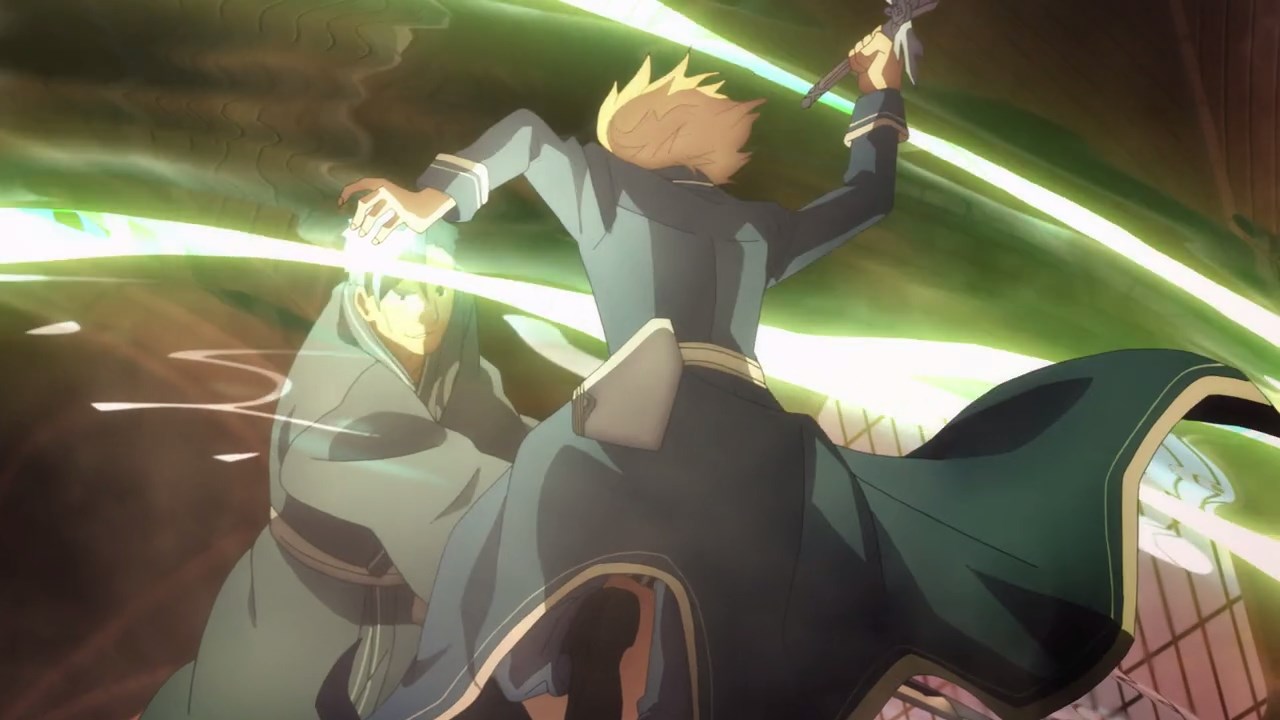 And because of the sword’s properties, Eugeo was caught off-guard when Bercouli’s slash sped-up… 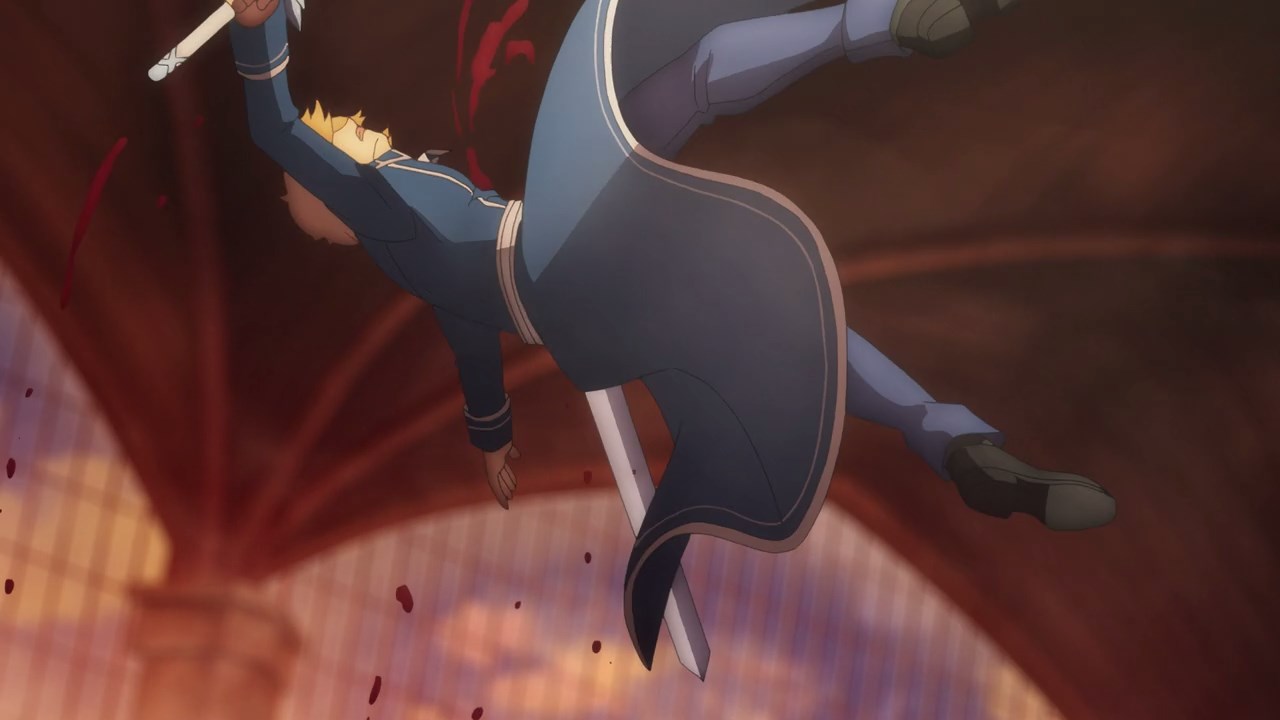 … and struck Eugeo to the belly that he was sent flying to the hot springs. Well, that’s gotta hurt! 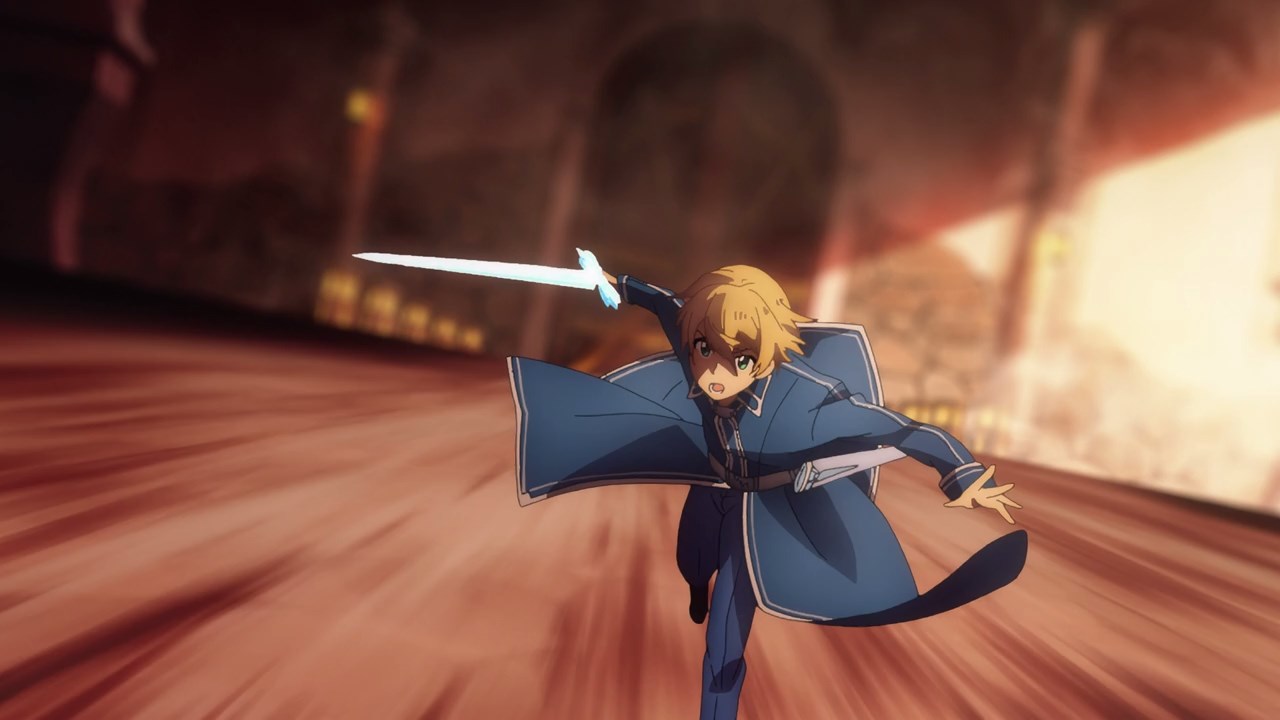 But that didn’t stop Eugeo from continuing his assault towards the legendary hero of Rulid Village as he went back to the offensive. 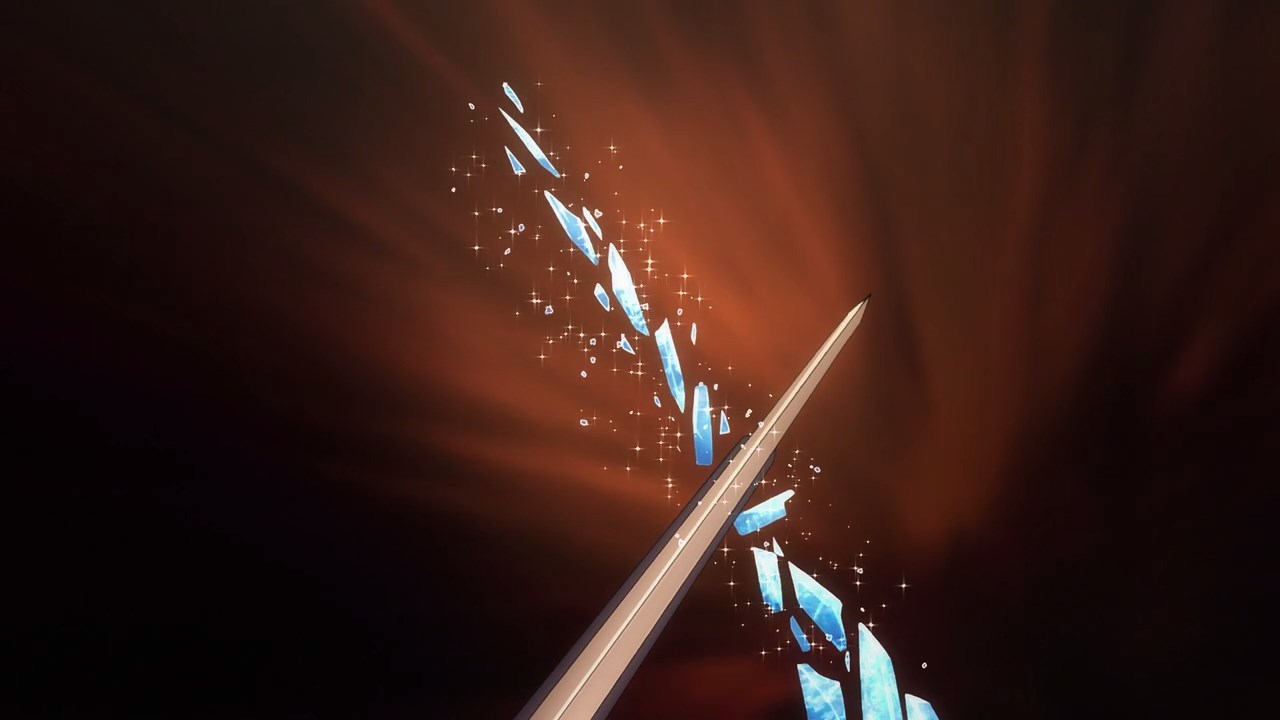 And this time, Eugeo decided to trick Bercouli by intentionally breaking his sword… 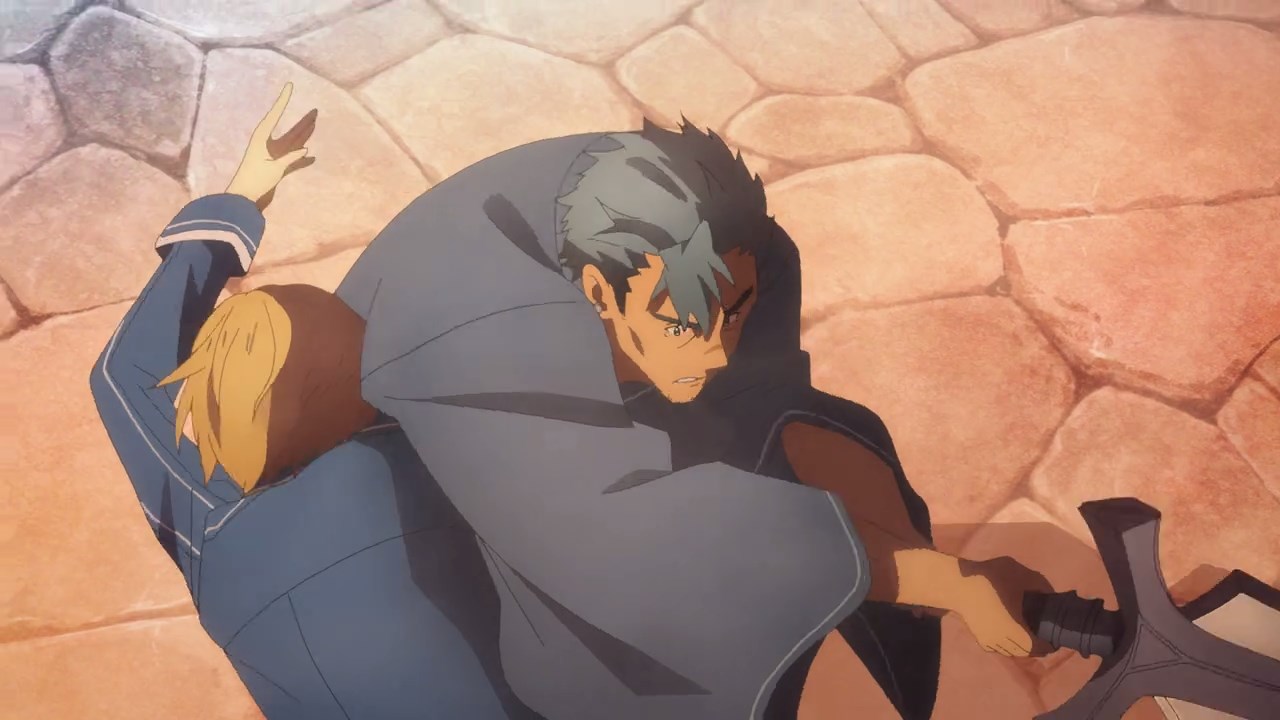 …and tackle the first Integrity Knight to the hot springs when Bercouli lowered his guard. 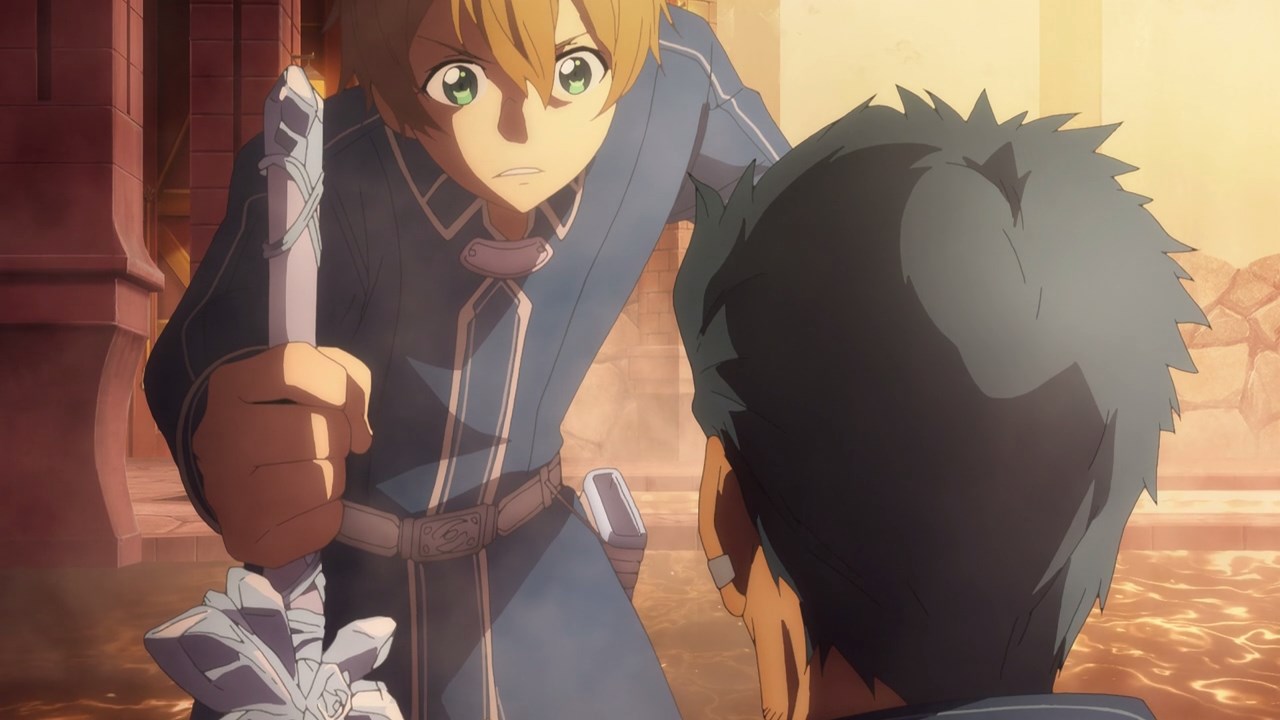 Once Bercouli is down, Eugeo pulled his Blue Rose Sword to use his powerful Perfect Weapon Control Art. 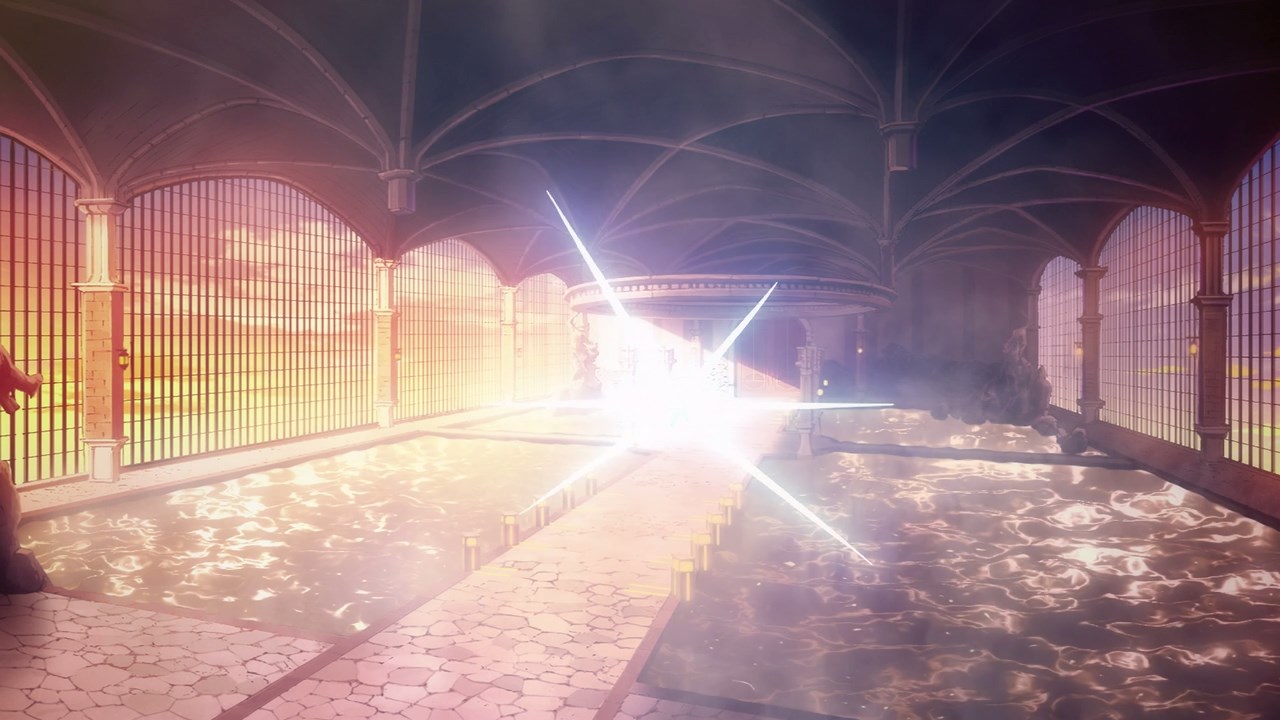 And of course, it needs an indication that the Perfect Weapon Control Art is activated. 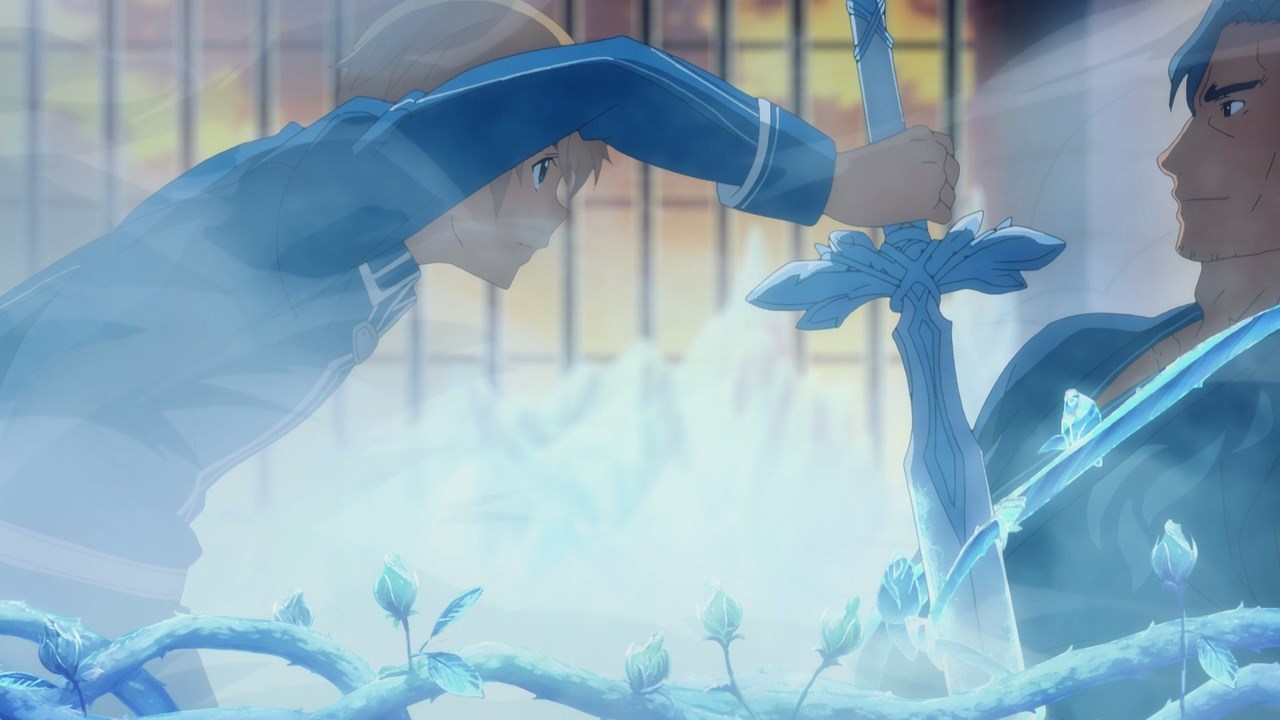 So after Eugeo activated his Perfect Weapon Control Art, his body is frozen. But so is Bercouli as he cannot move thanks to the Blue Rose Sword’s ice and rose properties.

Of course, the reason why he did a reckless move as bet on his life that Bercouli will be the first swordsman to befall on his sword. Then again, Eugeo wanted to remind Bercouli that he’s the legendary hero from his village that many of them revered him, something that Bercouli can’t recall due to his memories being tampered. 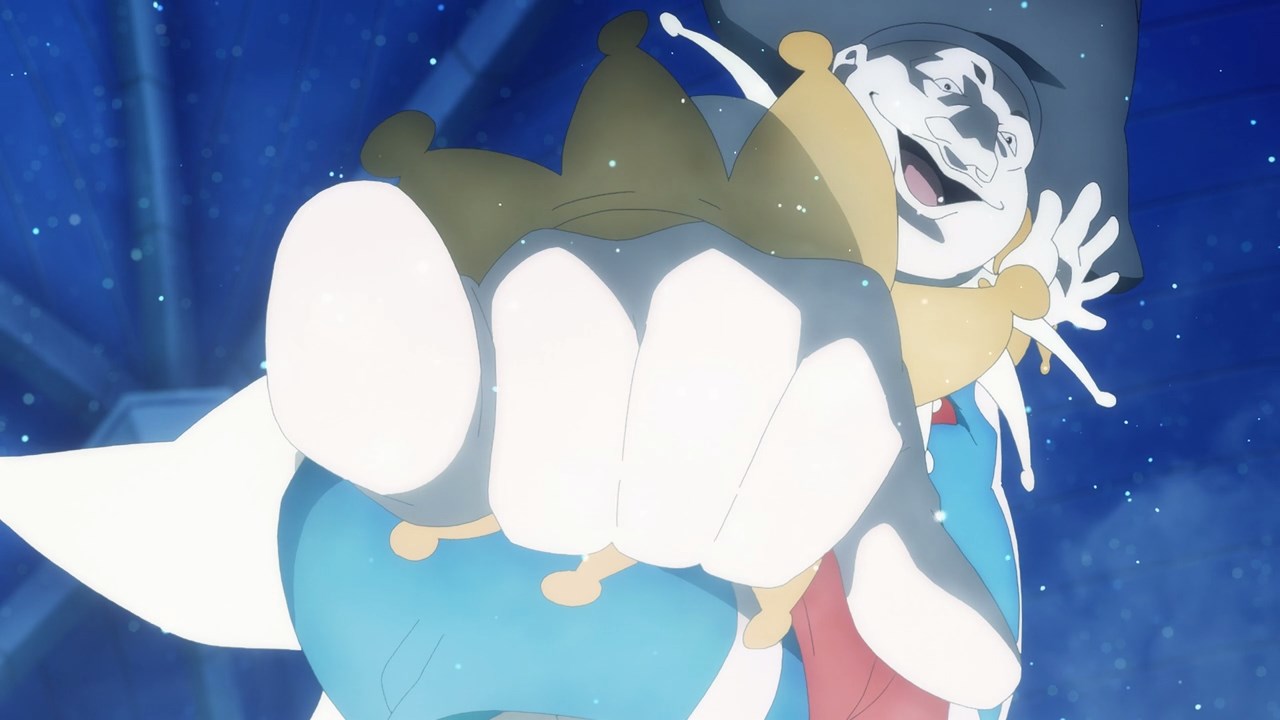 But just as Eugeo trying to convince Bercouli that he had a past life as one of the legendary heroes, some rotund figure appear named Prime Senator Chudelkin where he’s disappointed that Bercouli Synthesis One failed to defeat the intruder. 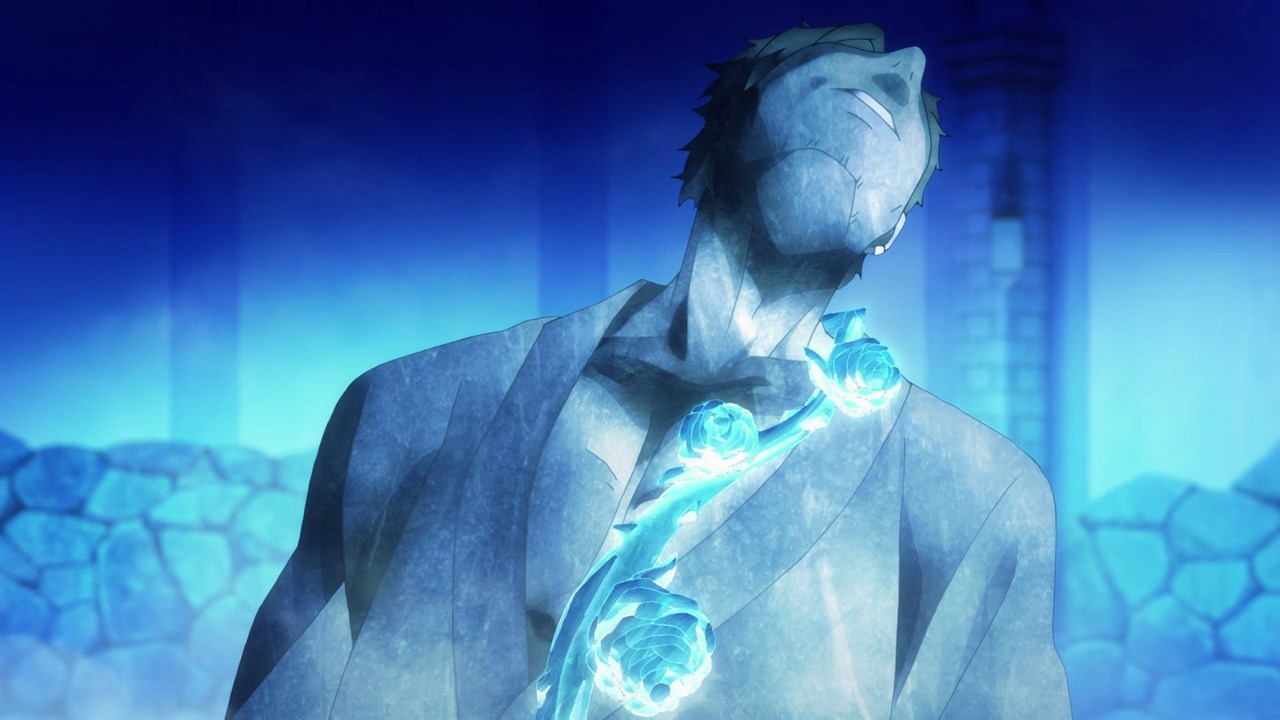 So instead, Chudelkin decides to freeze Bercouli into a stone where he’ll never rise again. Dang, why does Bercouli has to suffer like this? 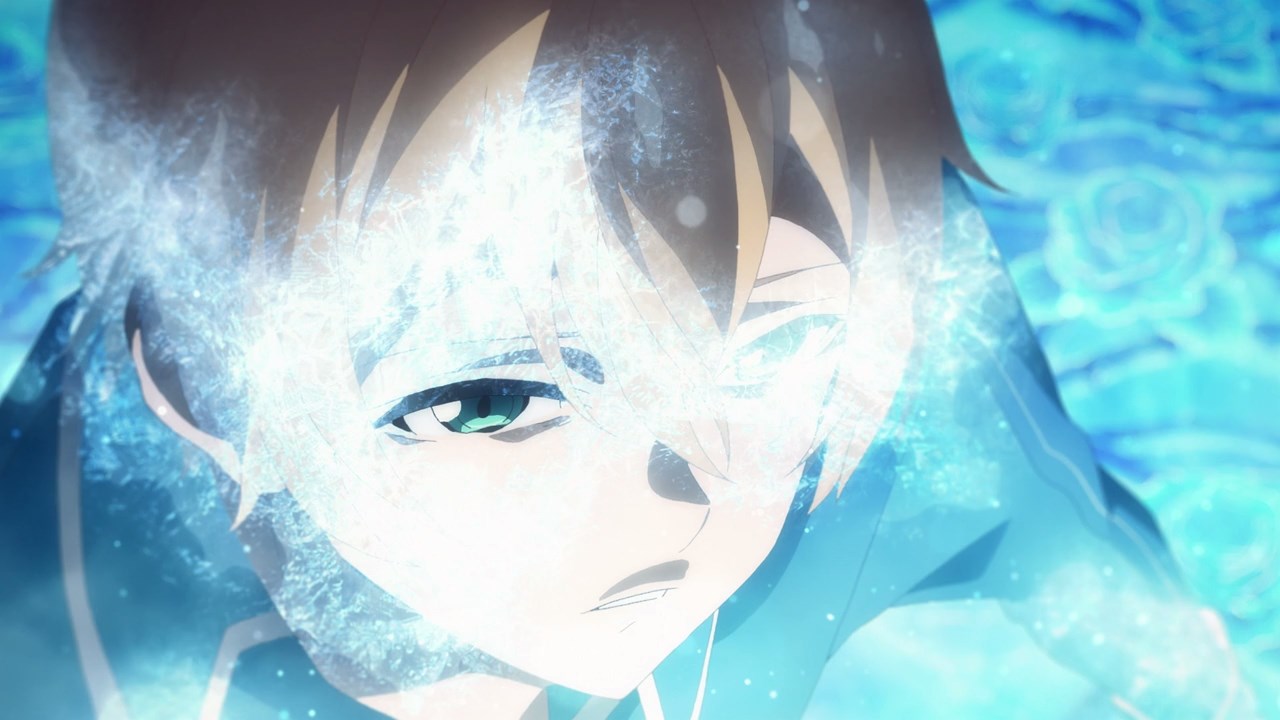 On the other hand, it appears that the prime senator is interested on taking Eugeo to the pontifex. Wait, don’t tell me that Chudelkin wants to turn him into another Integrity Knight? 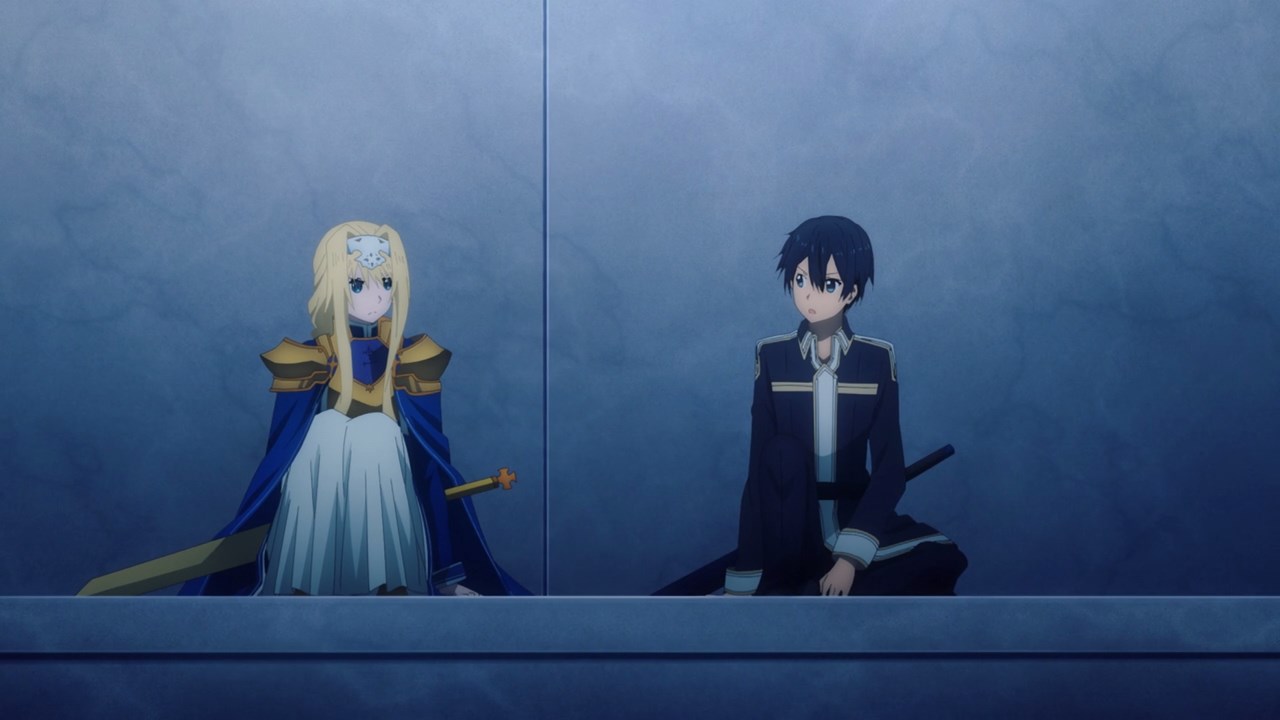 Meanwhile, here’s both Alice and Kirito as they climbed the tower until they found a platform to rest after a day of climbing (and fending off gargoyles). Also, Kirito told Alice about her past memories like having Selka Schuberg as her sister, as well as her time spent with him and Eugeo.

Oh, and he told about the impending invasion from the Dark Territory, something that Alice and her fellow Integrity Knights are worried about but the pontifex and the prime senantor just shrug it off because it’s a minor issue. Of course, the truth is that they’re deliberately letting those monsters in because they’re assholes! 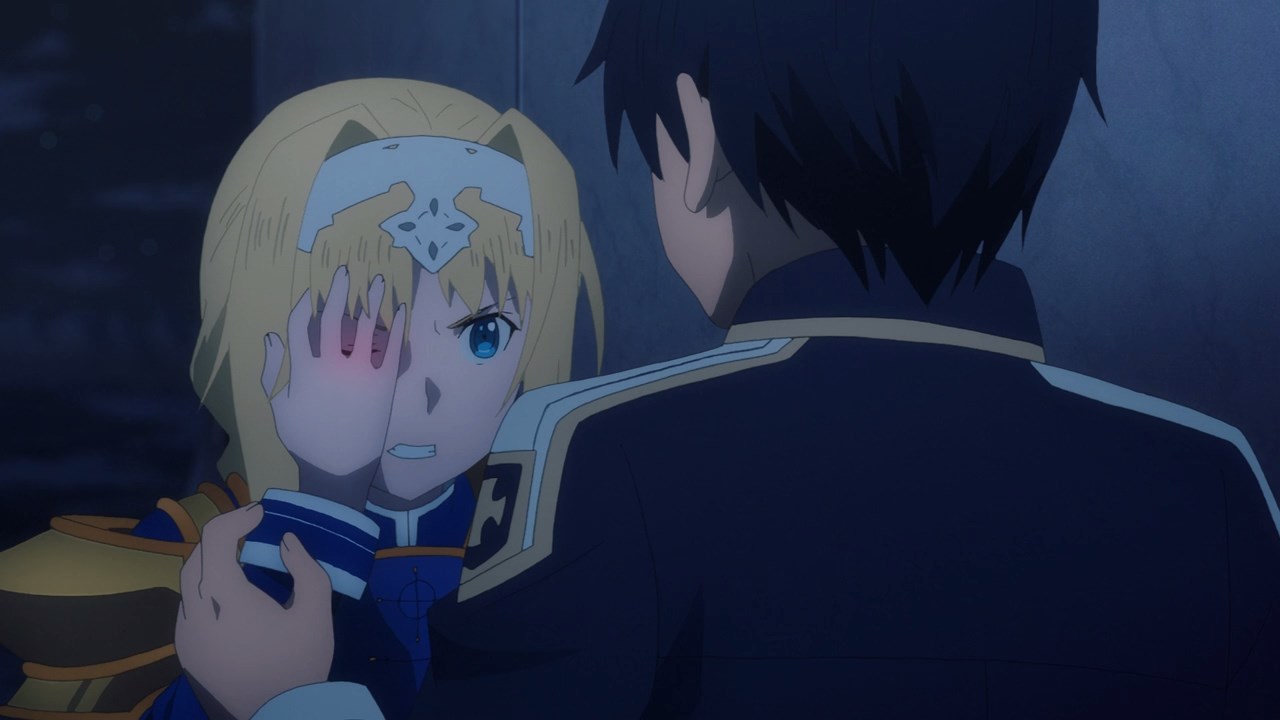 But just as Kirito continues to tell about Alice’s memories, her right eye is acting up again. In fact, it’s the same thing that Eugeo experienced back in Ep. 1 and 10… 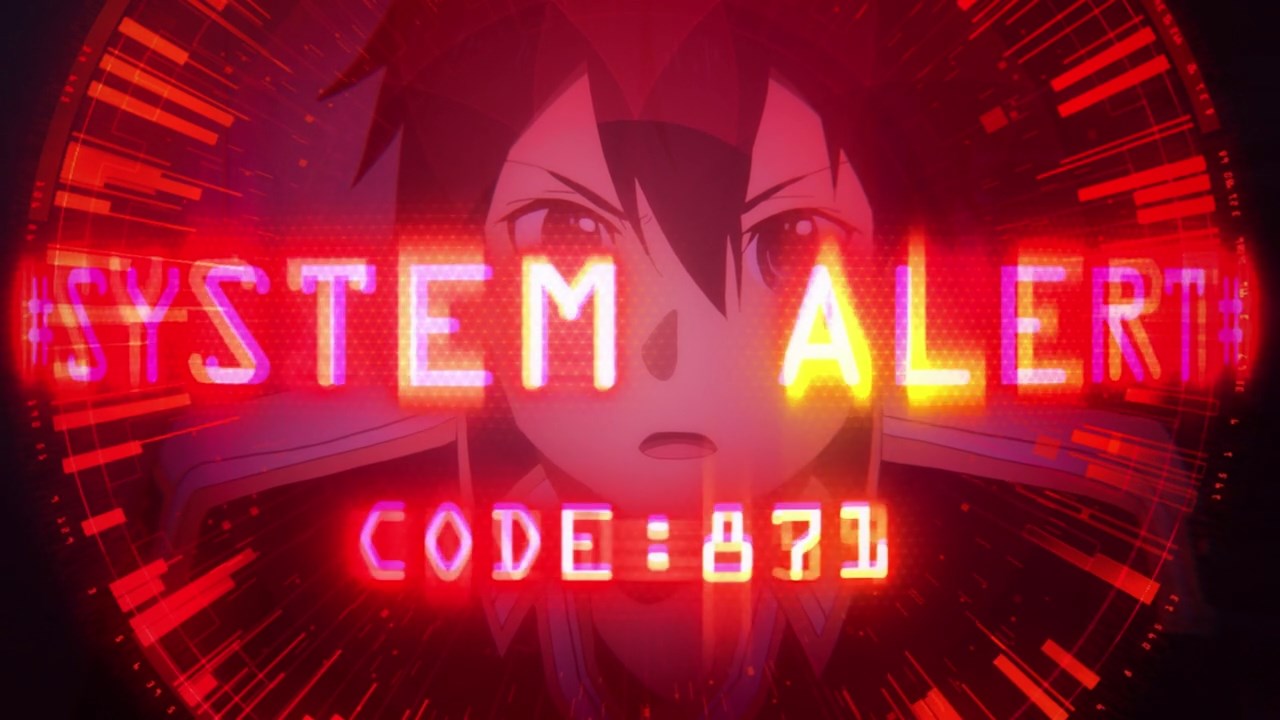 …right down to the “System Error” code. It seems that this error is holding Alice back, and I blame Quinella for implementing it because she wants to control the Fluctlights in the Underworld. 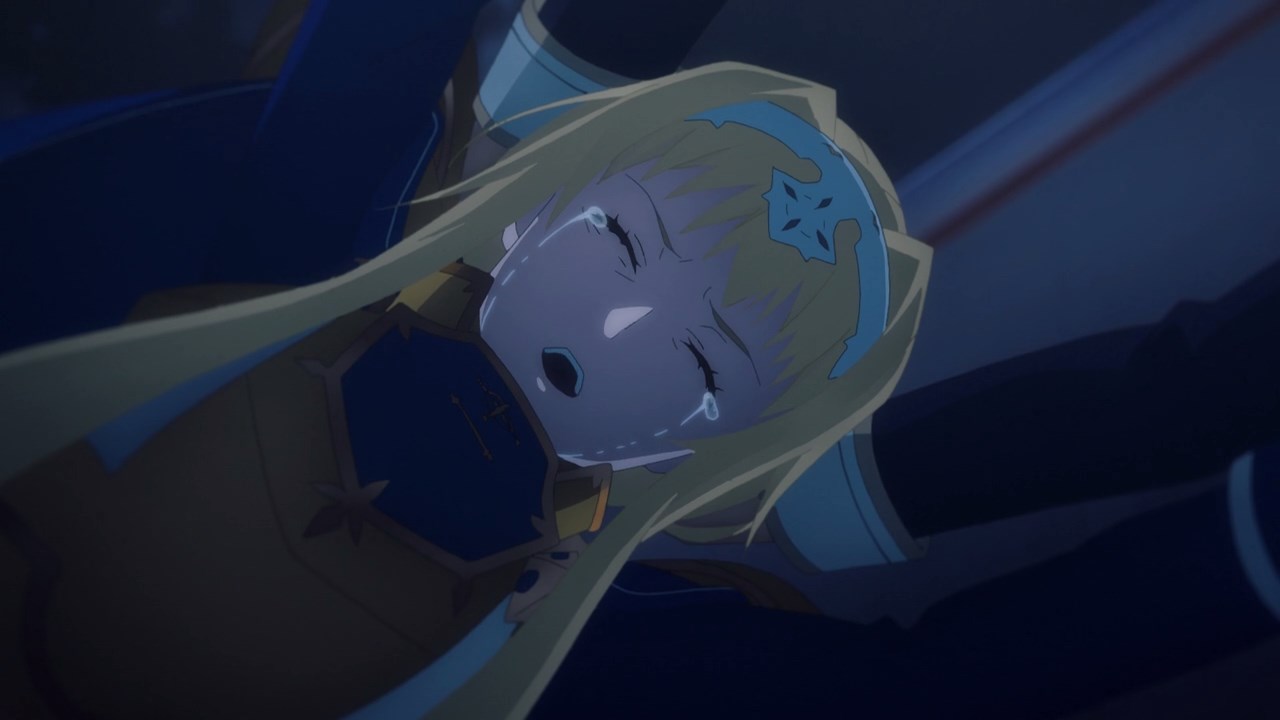 For now, Kirito told Alice to calm down. But you know what, would it be better if Kirito yank Alice’s right eye in order for this pain to go away, but he needs to make an eye patch for her. 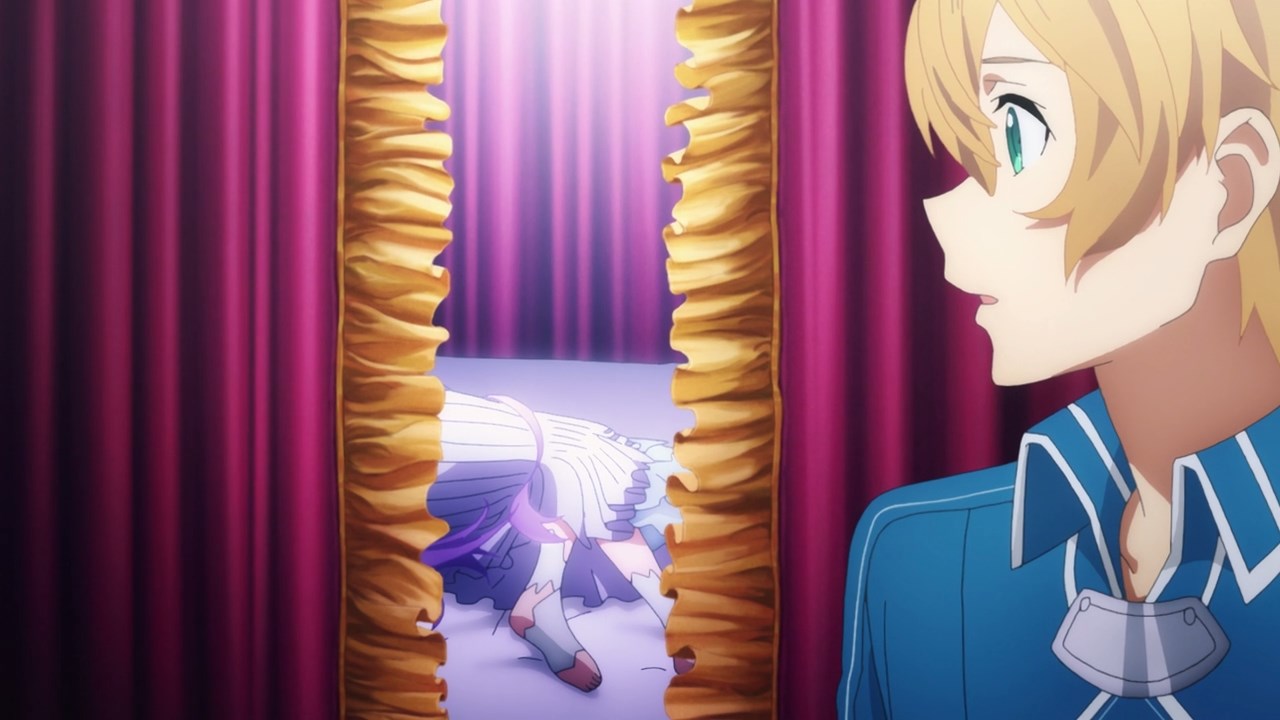 But let’s go back to Eugeo as he’s now at the top of the tower where the pontifex is waiting for someone to cure her boredom.

Of course, Eugeo will have to act fast by stabbing Quinella with that special dagger. Otherwise, it might be too late for him. 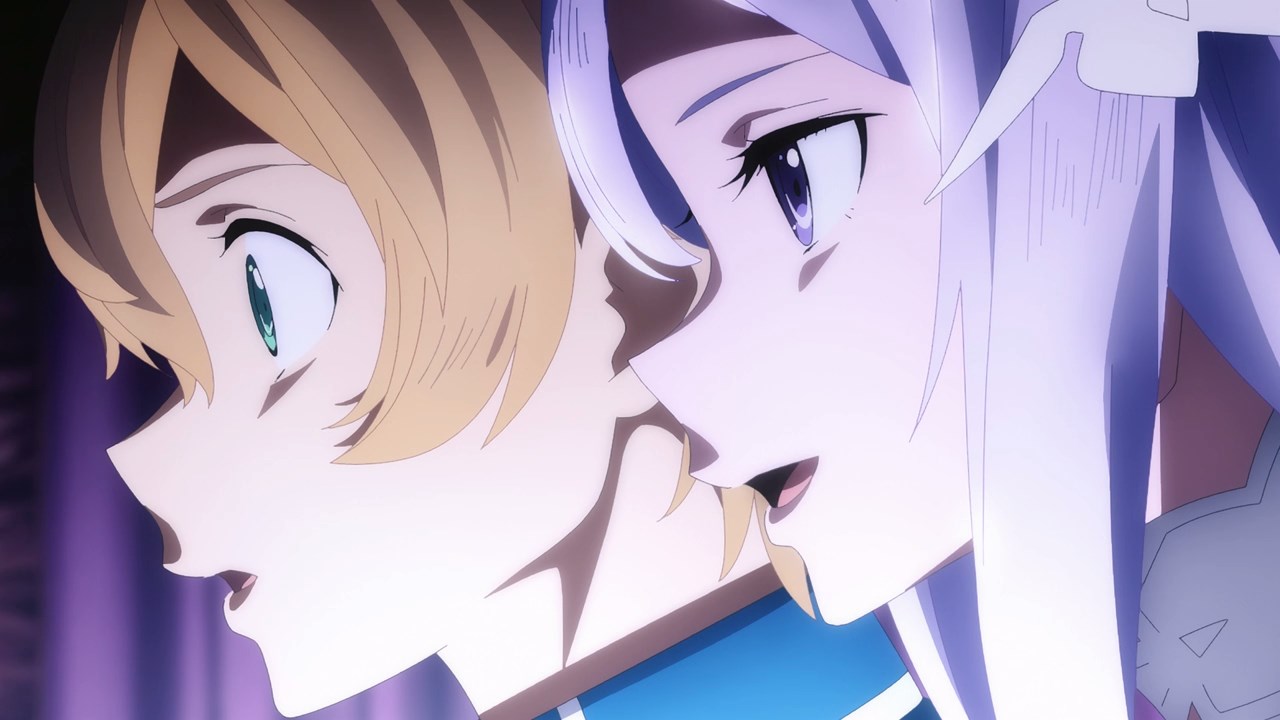 Well, let’s just say that Eugeo is too slow as Quinella woke up from her slumber, telling him that he’s being a bad boy for killing his own family out of jealousy.

Um Eugeo, stay away from the pontifex as she’s manipulating you!

Unfortunately for him, Eugeo couldn’t resist the temptation from the pontifex as Quinella used her body to convince Eugeo to join to her side. Man, she’s not too holy!

In any case, I’m scared of what’s coming up next as I’ve managed to catch-up with the latest episode. Then again, I have to wait for the dust to settle as Kirito will be forced to fight his friend who just become an Integrity Knight.

But what about Alice, will she defy the pontifex after learning the harsh truth that Quinella manipulated her, includiing those past memories? You know what, I think the best solution is to take out her right eye so that Alice won’t hold herself back against Quinella and her allies.

Anyways, tune in next time as Sword Art Online: Alicization is reaching its conclusion… for the first half.