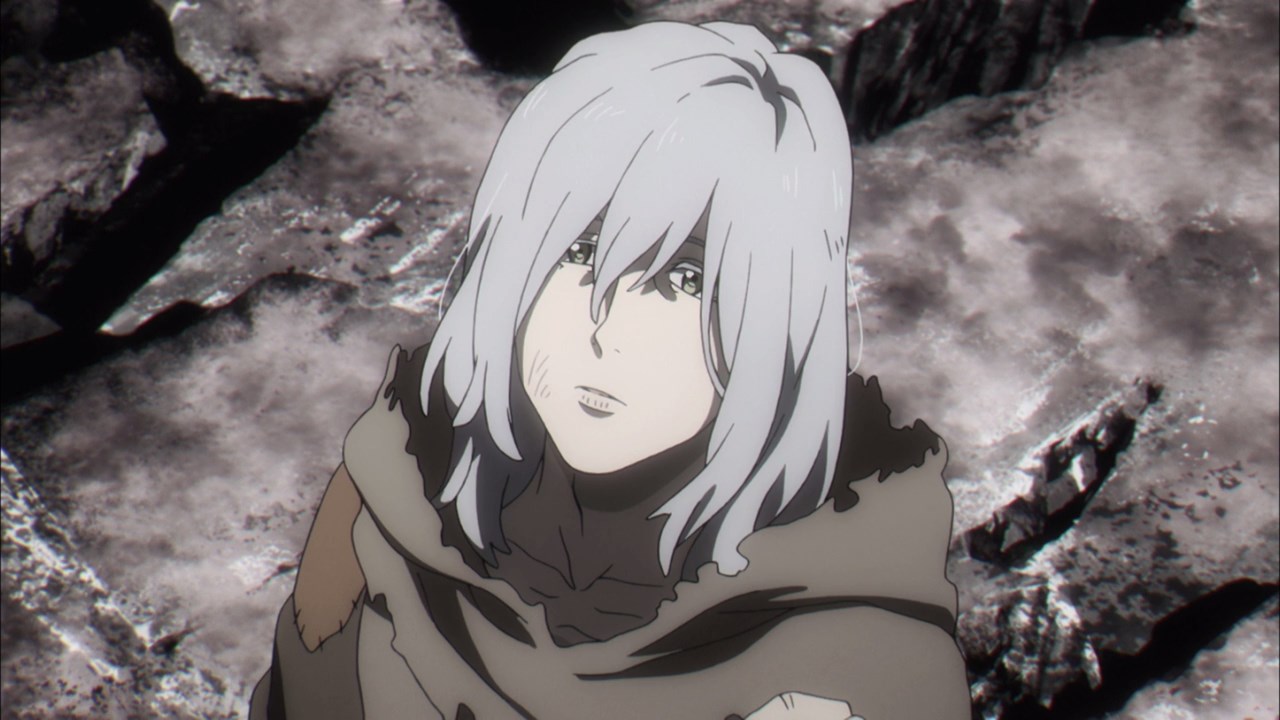 Hey everyone, it’s Echoes and we haven’t seen him for a while after Episode 3. Of course, Echoes has returned to his homeworld but it appears that he saw a familiar face. 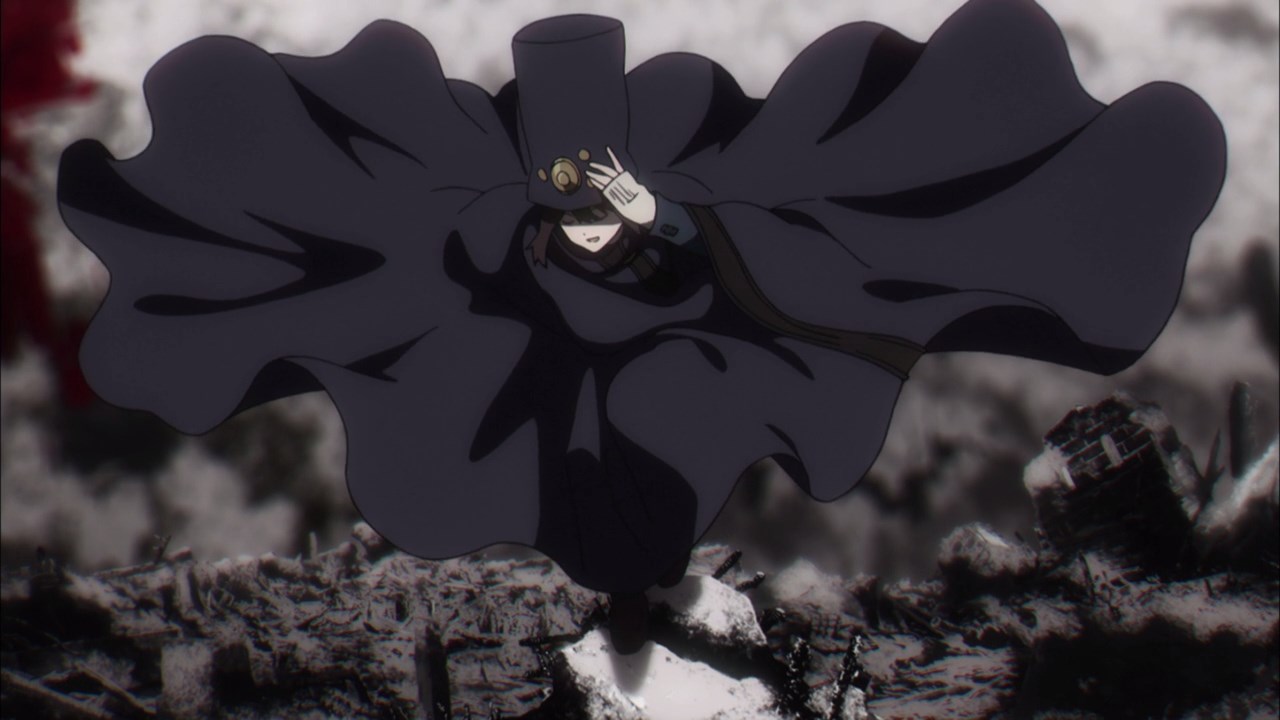 With that said, it’s time for Boogiepop to tell a story about a scarecrow, or more specificially how the grim reaper came to life as this story arc tells the origins of Boogiepop. 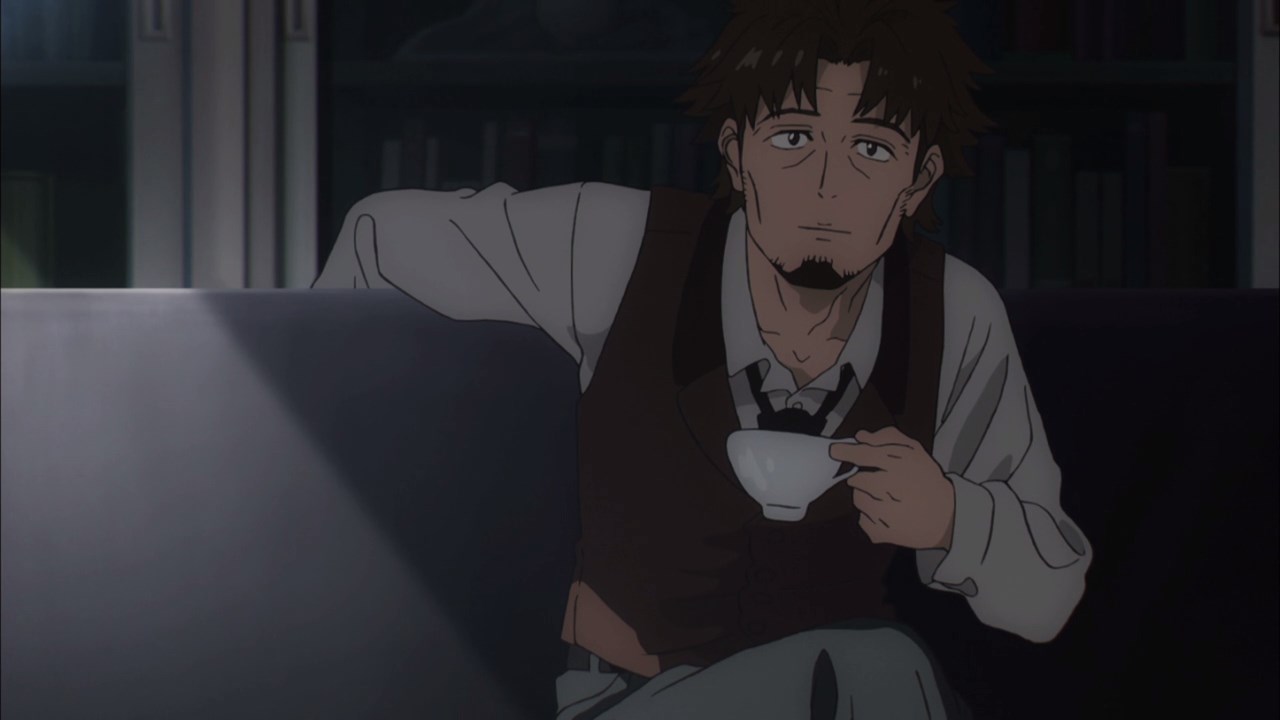 Let’s start things off with the introduction of Shinpei Kuroda, better known as Scarecrow as he’s an artificial human from the Towa Organization whose mission is to find people who’s experiencing evolution or some sort. 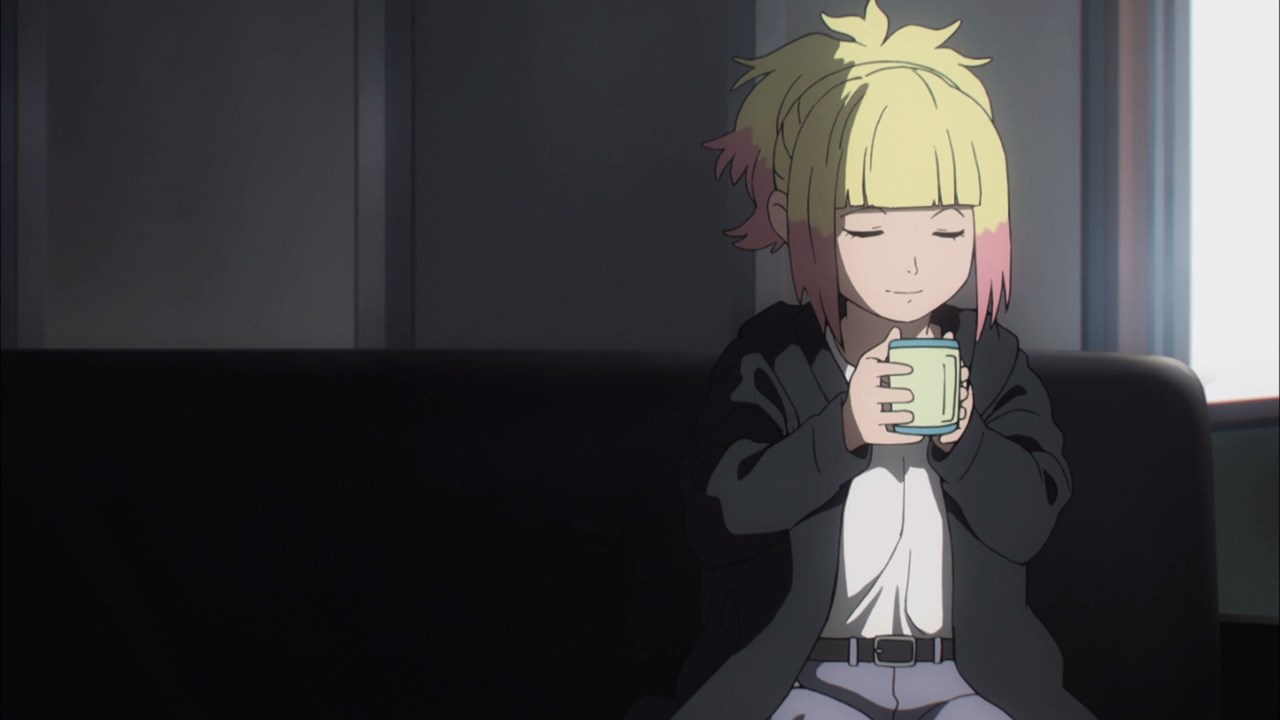 Also joining Kuroda is his assistant named Pigeon where they got a tip that one of the Towa Organization’s dissidents named Kyouichiro Teratsuki donated money to a certain hospital, so Scarecrow decides to check it out for himself. 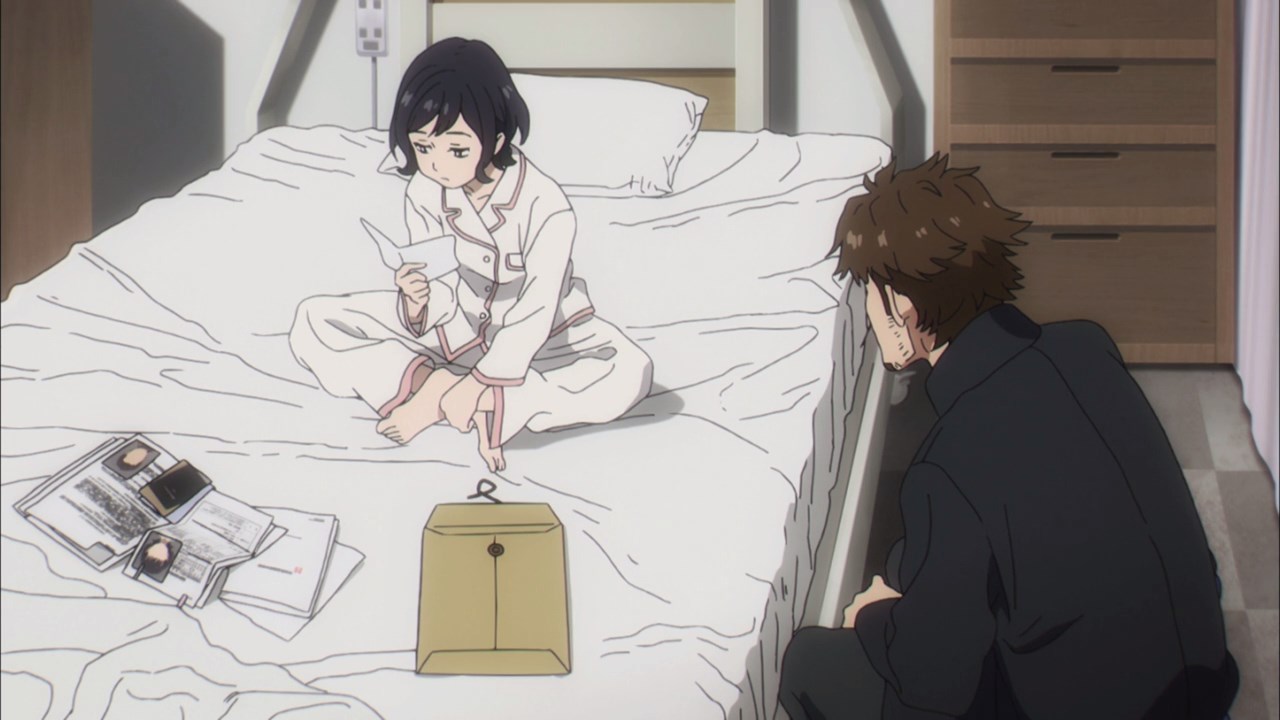 However, he end up meeting with one of the patients named Nagi Kirima. Well, a young version of Nagi because it’s a prequel to the main story.

While it’s unclear why she was hospitalized in the first place after losing her father, seems that Nagi Kirima is happy to meet Shinpei Kuroda even if it’s a short detour to his main target. 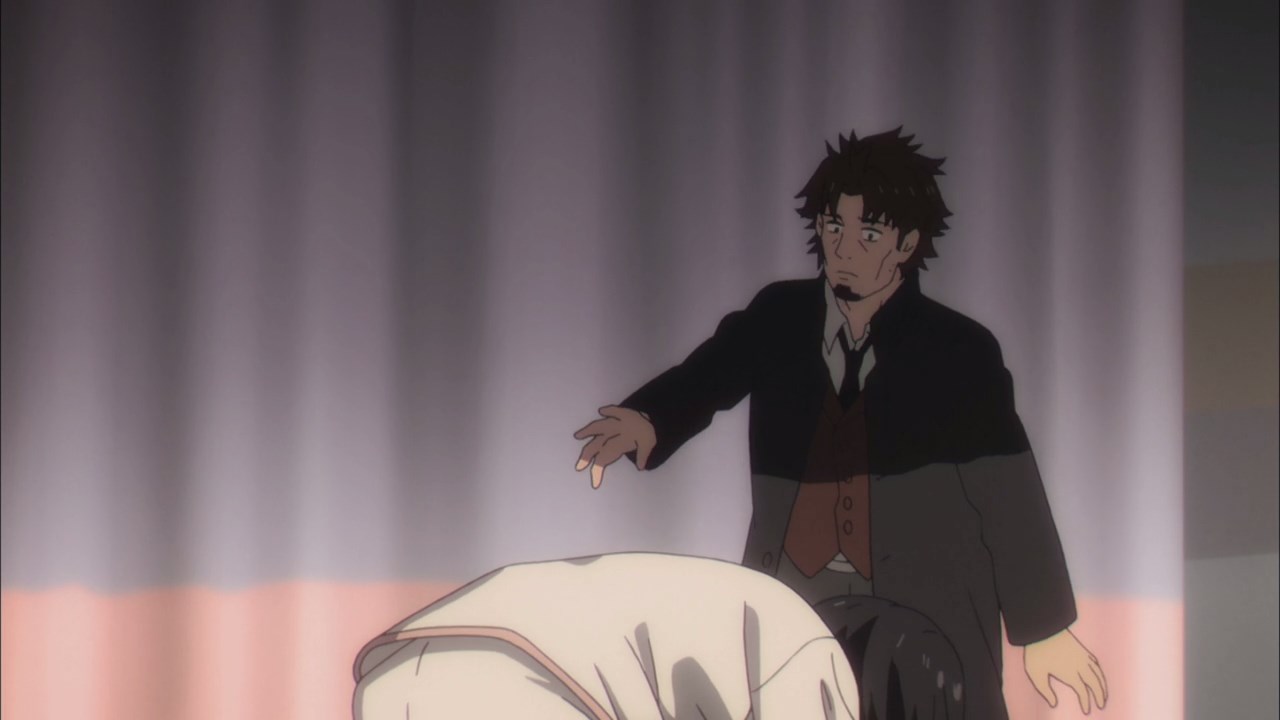 Unfortunately, Scarecrow found out that the reason why Nagi was hospitalized is not just because of some uncurable illness, but rather that her body is evolving.

Oh, and don’t think that she’s having a growth spurt because her evolution is a horrible one that she’s growing pains every single day until her body bursts into pieces, becoming some sort of monster from what I can interpret.

For Shinpei Kuroda, something needs to be done in order to save Nagi’s life. 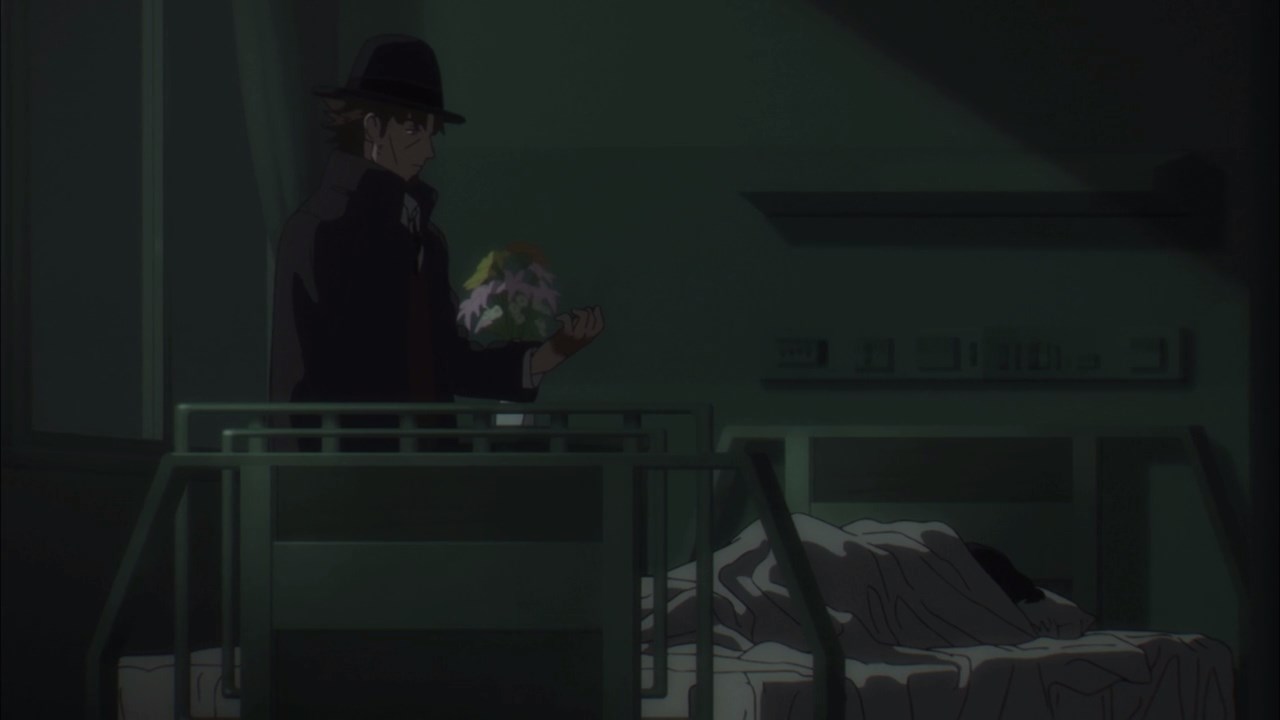 And so, he decides to steal a certain drug from a facility called RS20TTU in order to save Nagi Kirima from having her body being destroyed from the inside. 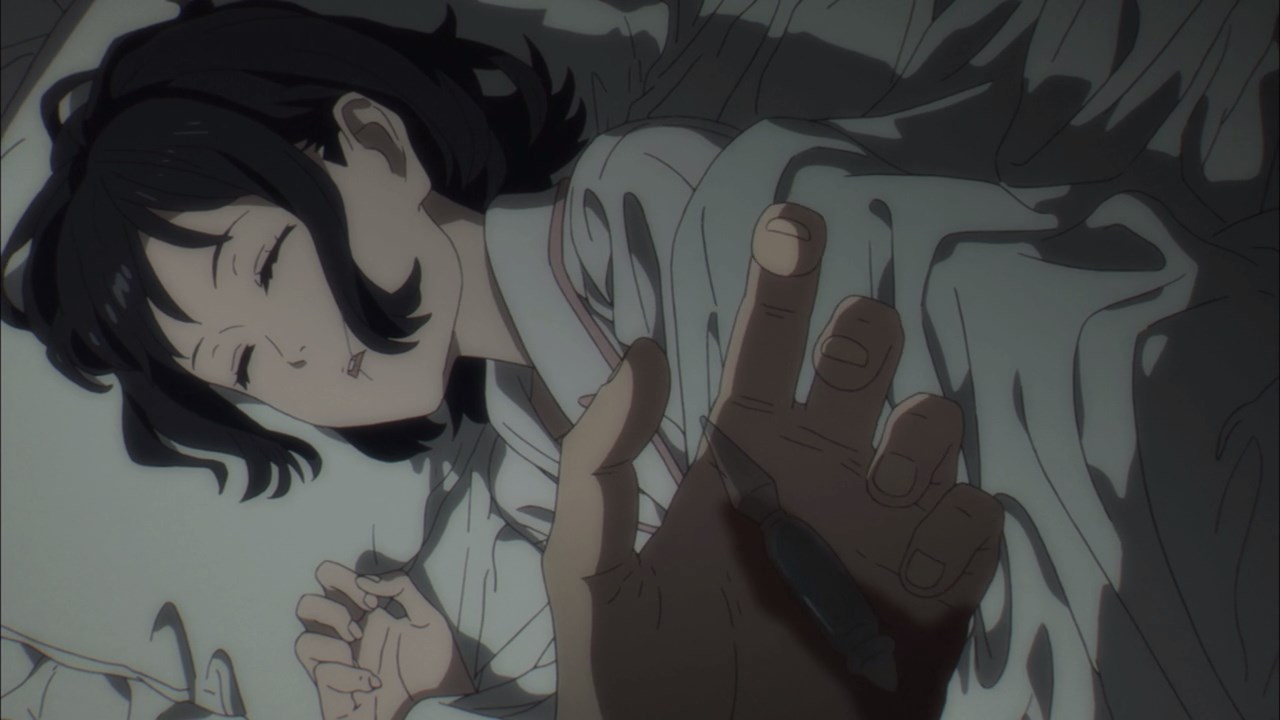 This drug is special is that it not only evolves a normal person like achieving regeneration, but also supress the side-effects of uncontrollable evolution.

In fact, the Towa Organization wants that drug hidden in the public eye as they want to continue conducting experiments in the shadows, but that doesn’t stop Scarecrow from stealing one of the drugs as he administer it to Nagi Kirima. 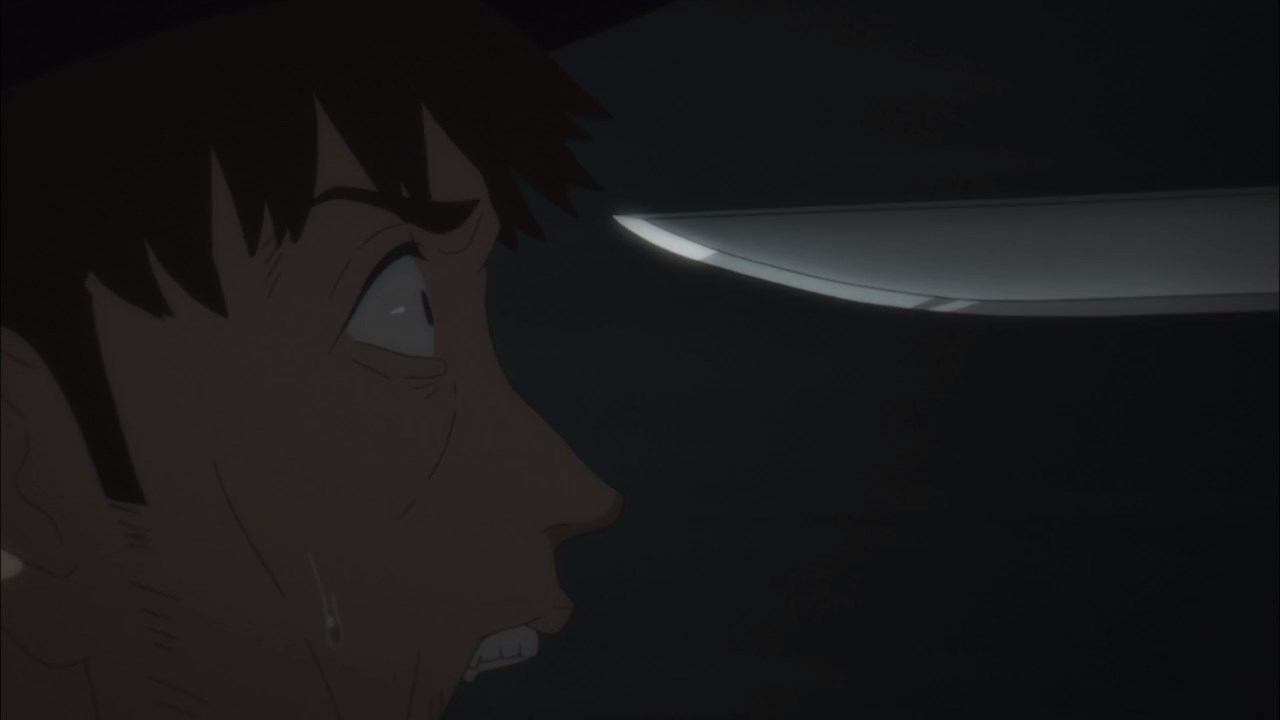 However, it appears that someone wants to silence Kuroda forever as an assassin from the Towa Organization appeared to kill him using a vibrating blade and clear the evidence. 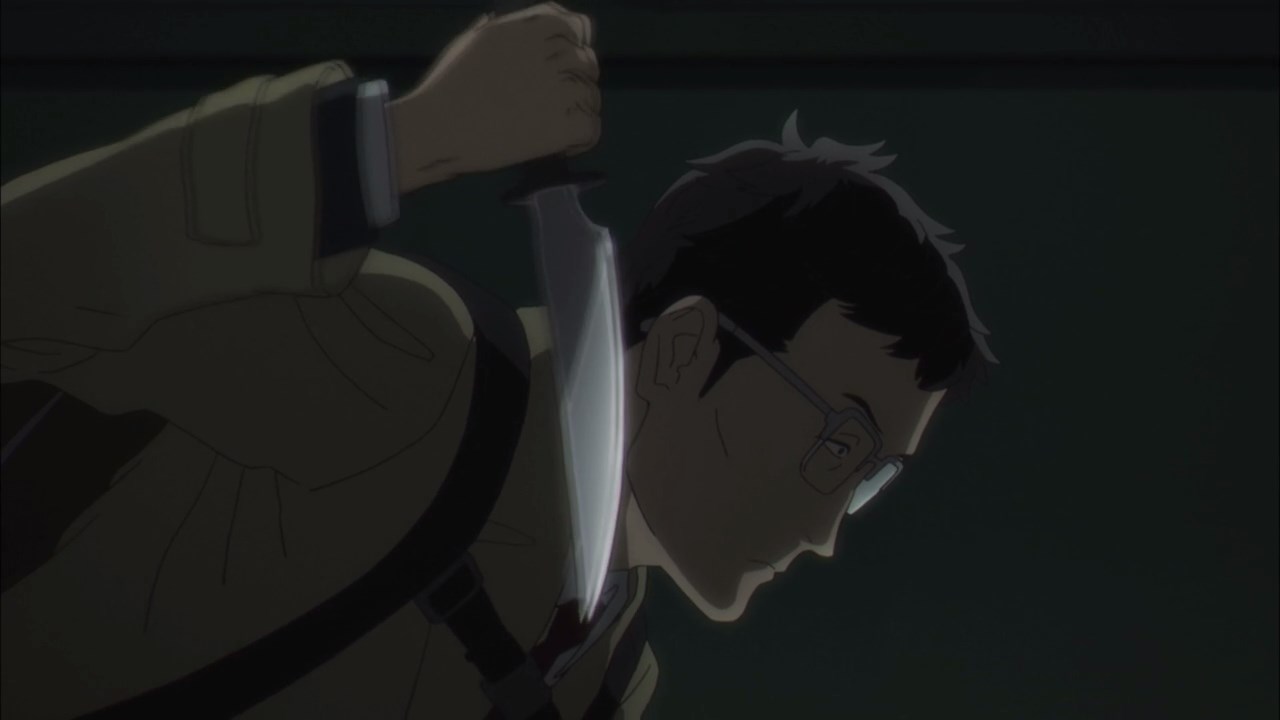 This is Masanori Sasaki, also known as Mo Murder as he arrived at Nagi Kirima’s private room to kill both Scarecrow, and possibly Nagi since Shinpei already administered the drug to her. 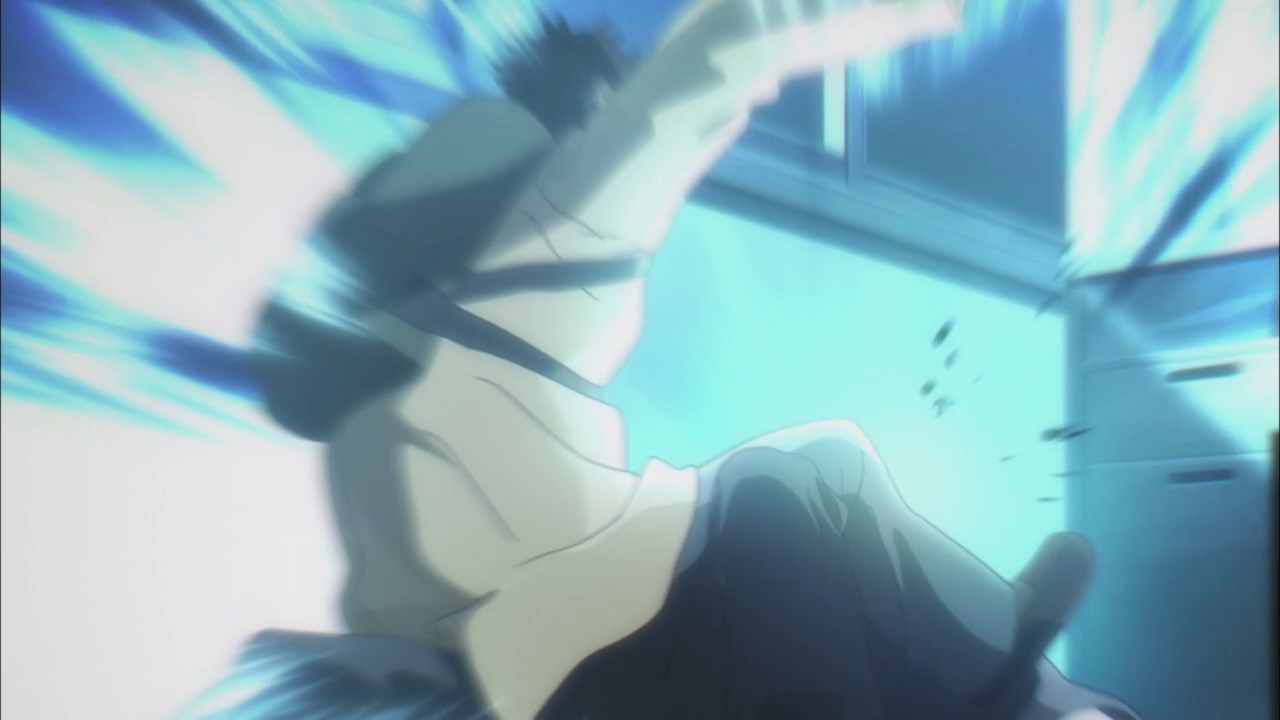 Unfortunately for Mo Murder, Scarecrow has a trick up in his sleeve as he literally shocks the enemy in order to get away from the scene. 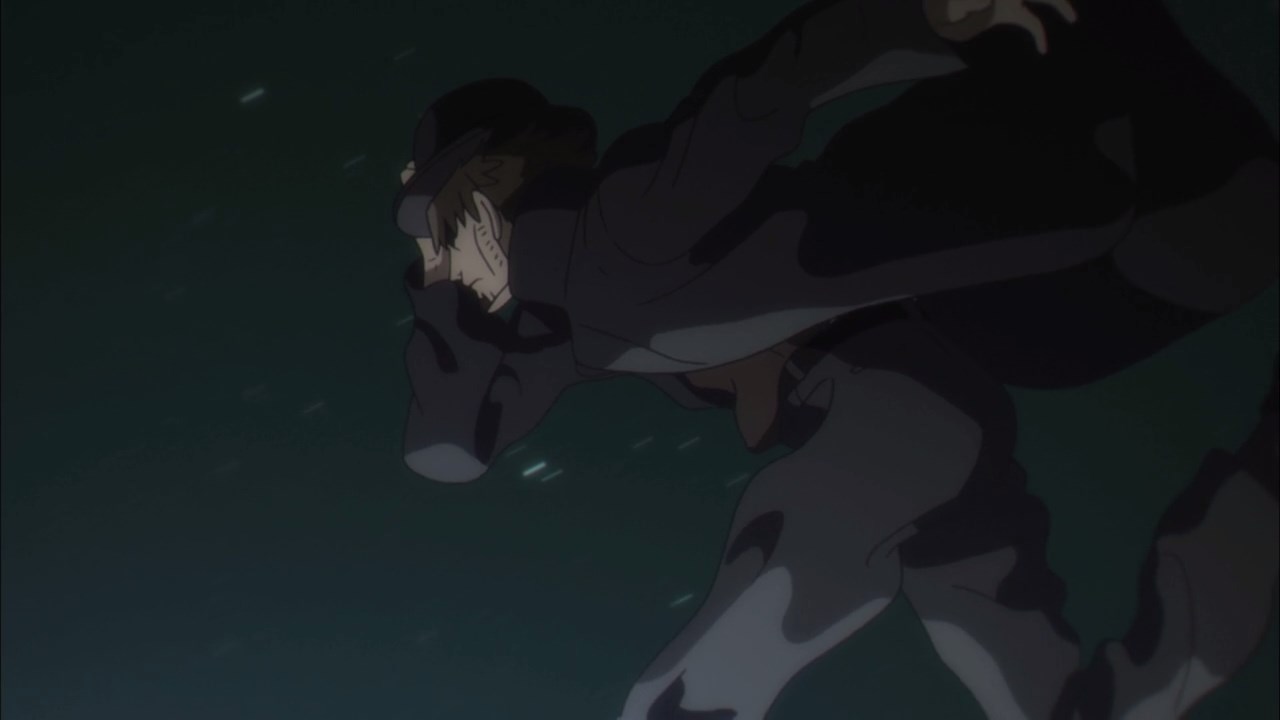 In any case, Scarecrow is done with his job on saving Nagi’s life, although he failed to find Kyouichiro Teratsuki in the end.

Of course, he’s still on the run as Mo Murder is chasing Kuroda’s tail. Unfortunately for Sasaki, he didn’t clear the evidence as he’s busy assassinating Scarecrow. 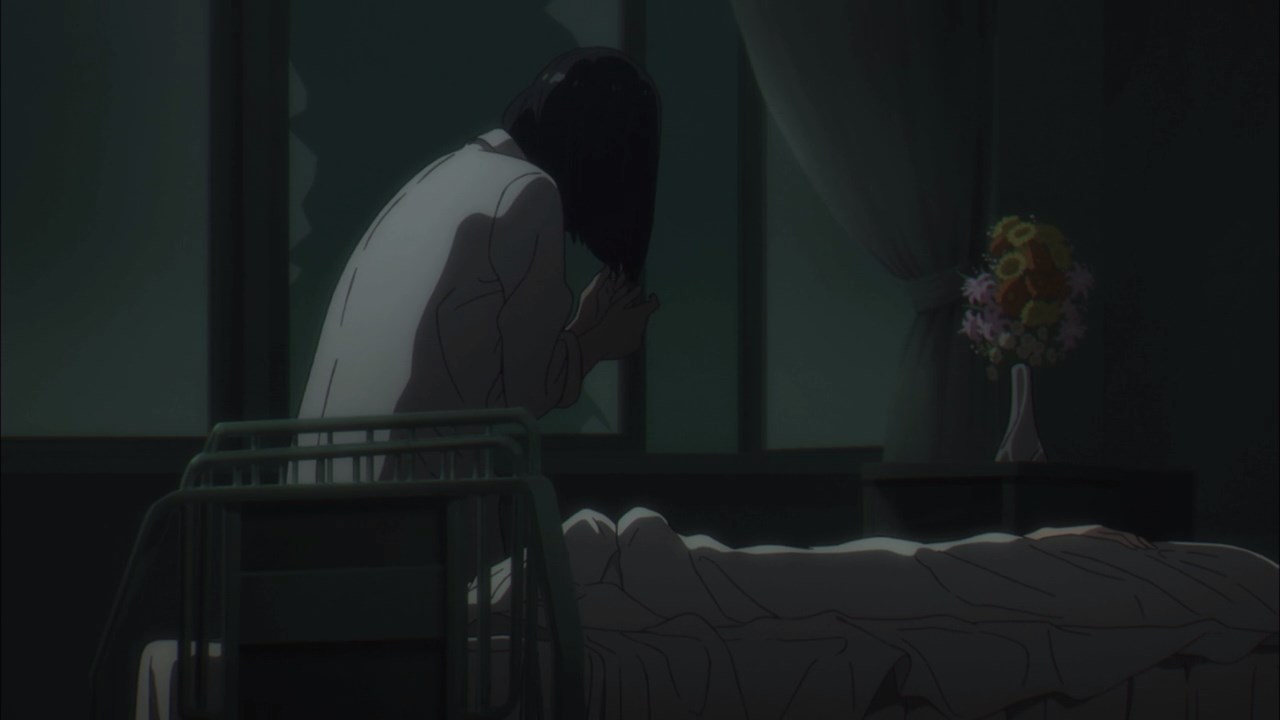 However, someone took the drug once Scarecrow and Mo Murder left the place. And man, I have a bad feeling that someone will use the drug in the worst possible way. 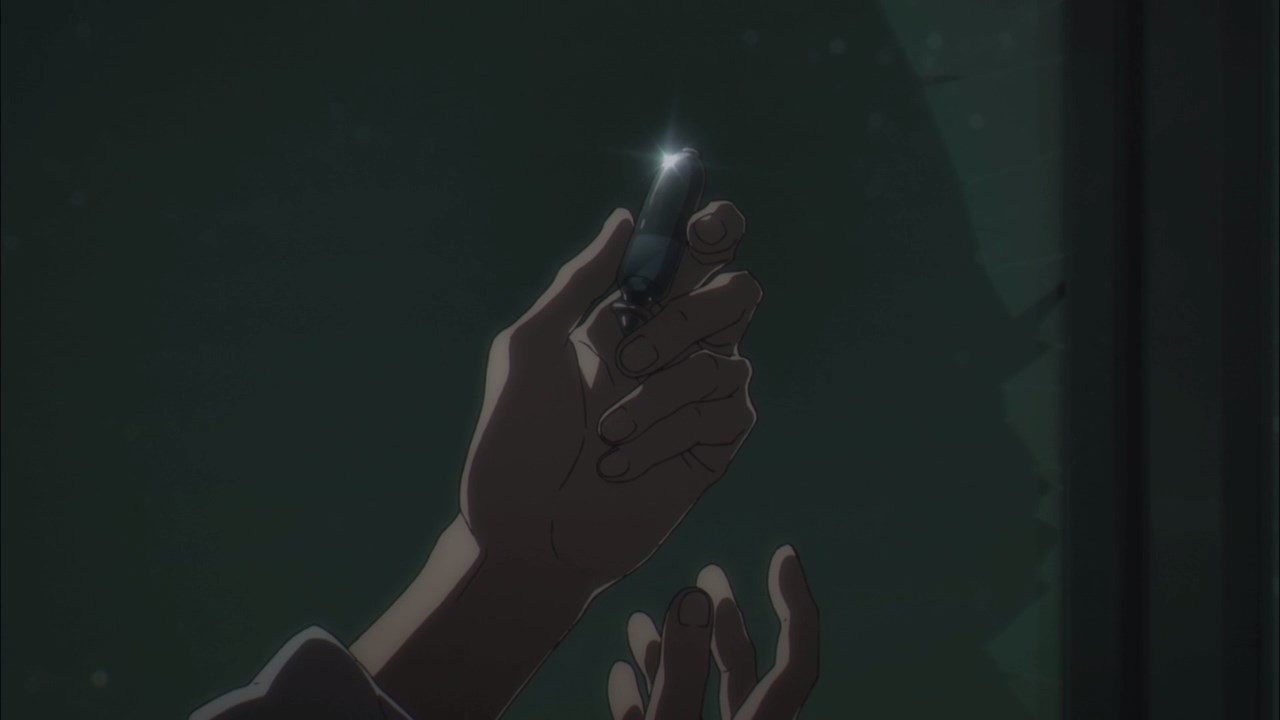 Regardless, the Towa Organization will target this person as he/she might use the drug. I’ll tell you who this person is but for now, let’s focus on Scarecrow’s whereabouts. 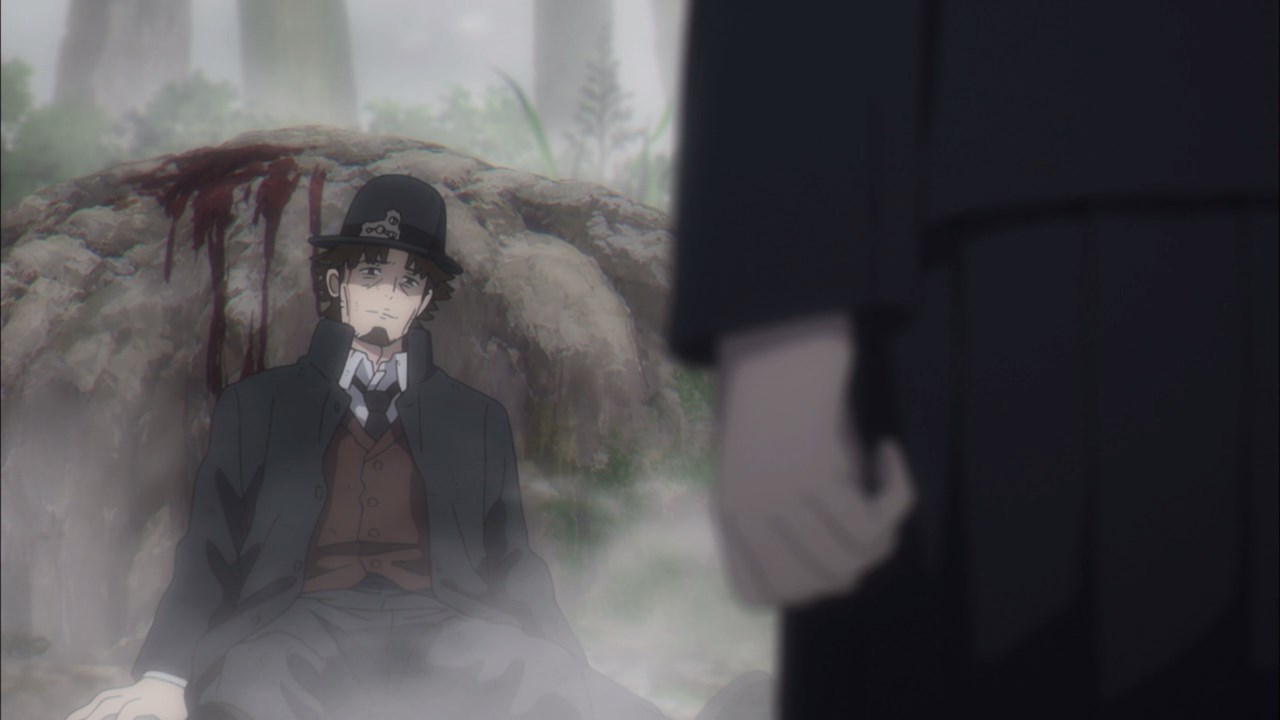 Sadly for Shinpei Kuroda, it appears that he got badly injured that he’ll die soon enough. Also, it turns out that Scarecrow is not human because his hat contains circuitry, hinting that Kuroda might be an android.

As he approaches the end of his life, Kuroda saw what he calls a grim reaper in a shape of a young girl. 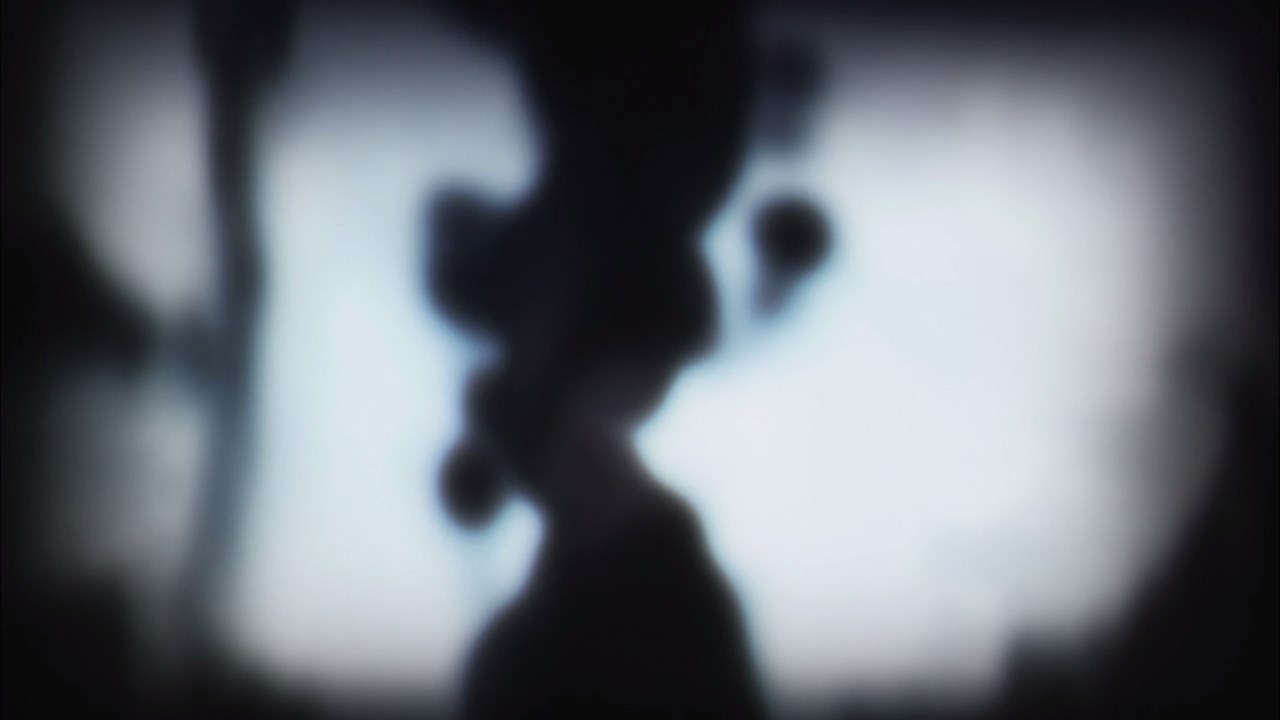 Or rather, a shadowy figure or a bubble that will pop and disappear at any moment according to Scarecrow due to his hazy eyes. Of course, this grim reaper doesn’t have a name, so Shinpei Kuroda gave the reaper a name “Boogiepop” until he dies from his grave injuries.

And with that, Scarecrow died at the city’s outskirts and it’s sad that he won’t get to see either Pigeon or Nagi Kirima ever again. Now then, who is the person that took the drug from Nagi’s private room? 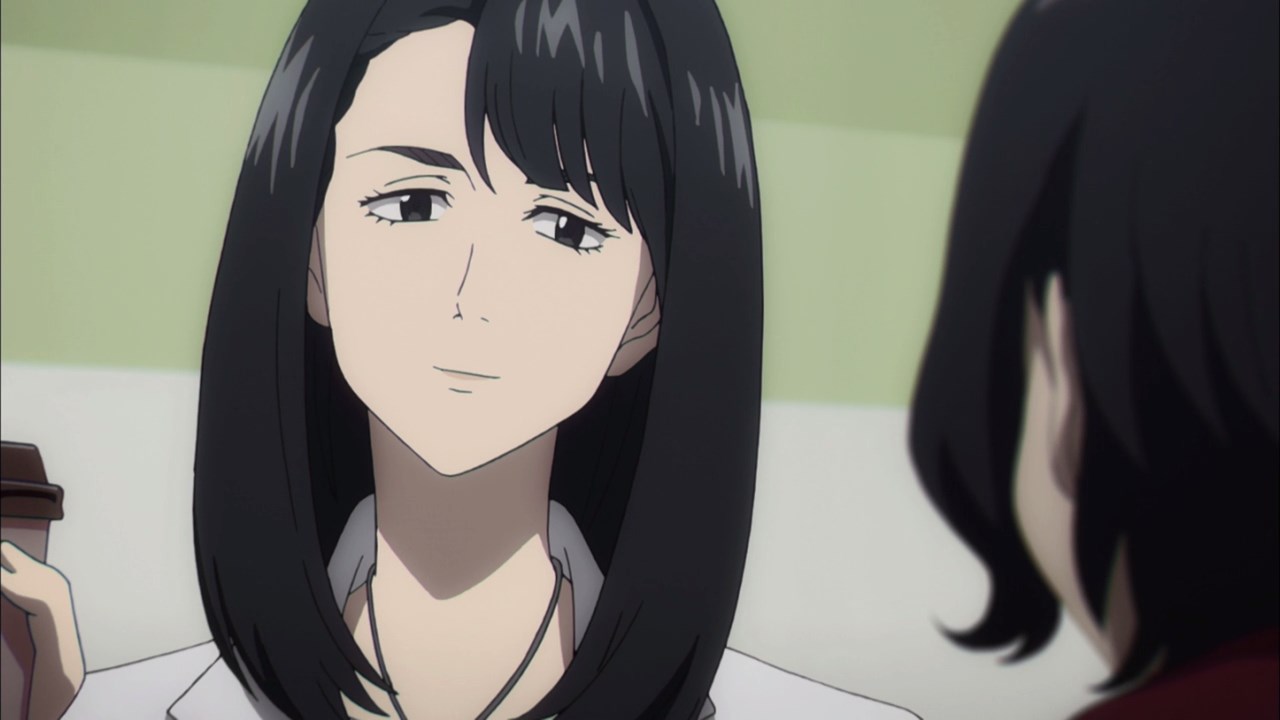 Well, this doctor named Makiko Kisugi who managed to stumble upon a drug after Scarecrow and Mo Murder left the scene. Also, this psychiatrist known to being a coward as Dr. Kisugi is scared. What scares her will be left unexplained. 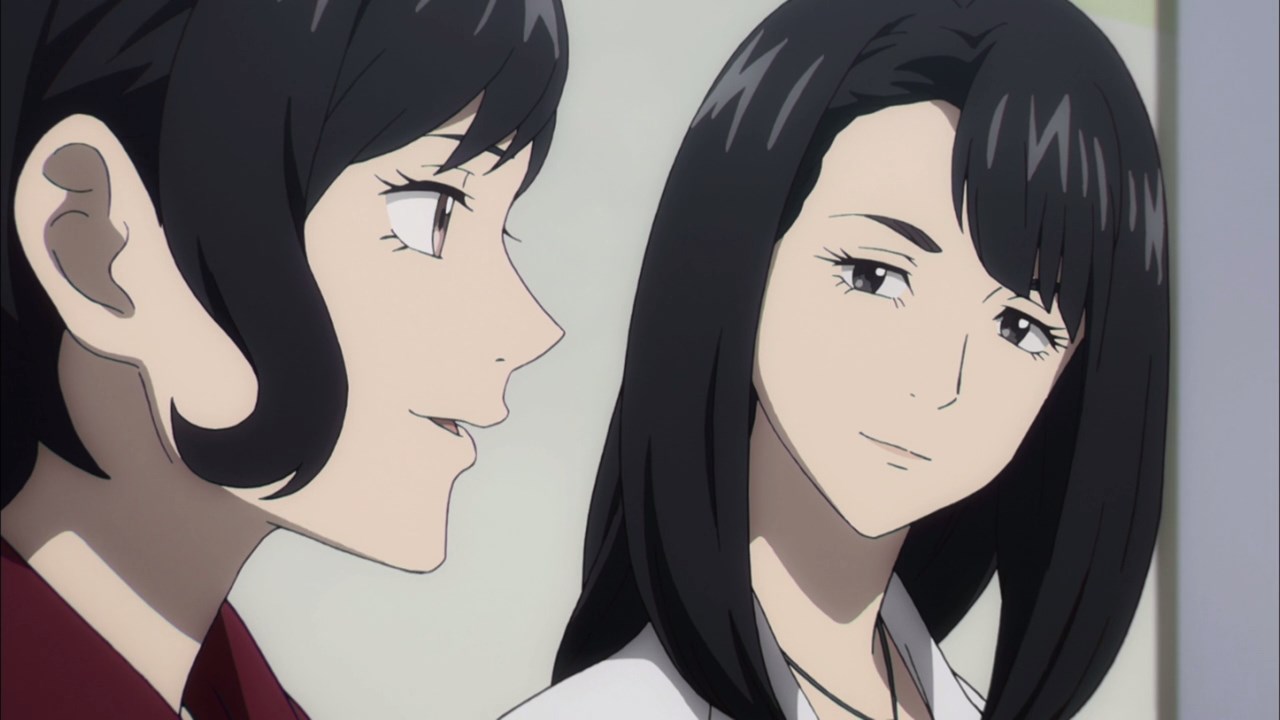 However, what Dr. Kisugi found out is that the drug not only cured Nagi Kirima, but it has a side-effect of making a living being evolve rapidly after administering it.

So while Makiko Kisugi is casually talking to Nagi Kirima, little did Kirima knows it that Dr. Kisugi is using the drug to experiment on lab rats and then to herself with great results. However, it appears that Makiko-san has changed thanks to the drug.

In fact, some say that she’s preying on girls who are scared that their brains get sucked out from their heads. This cause quite a stir to the public that the police are baffled on this unusual murder case. Of course, we’ll get to that later… 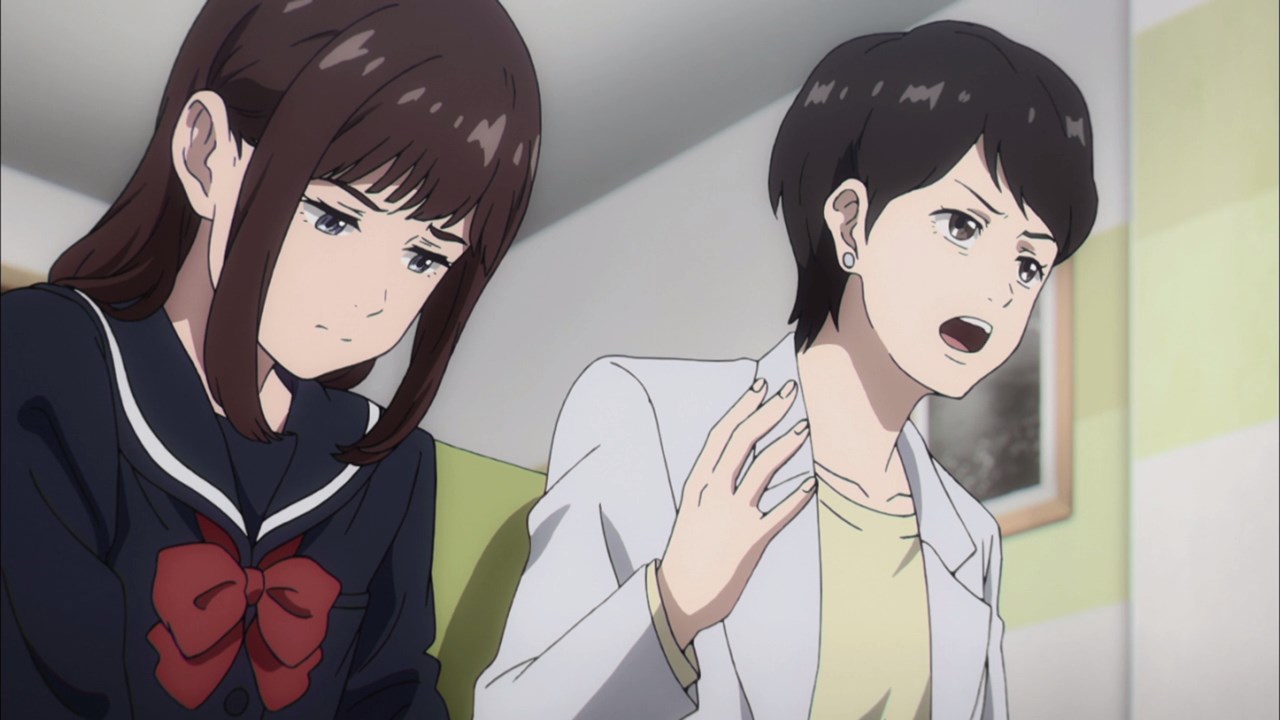 For now, we have Miyashita-san as she brought her daughter Touka to Dr. Kisugi because she’s worried that Touka develop some sort of split personality due to pressure or even trauma.

Then again, I feel that the reason why Touka got a split personality is because of her mother who pressured her to do better when it comes to academics, enroll at a prestigious school, and have a stable future. Man, I’m worried that her overbearing mother might turn Touka into a delinquent or something awful. 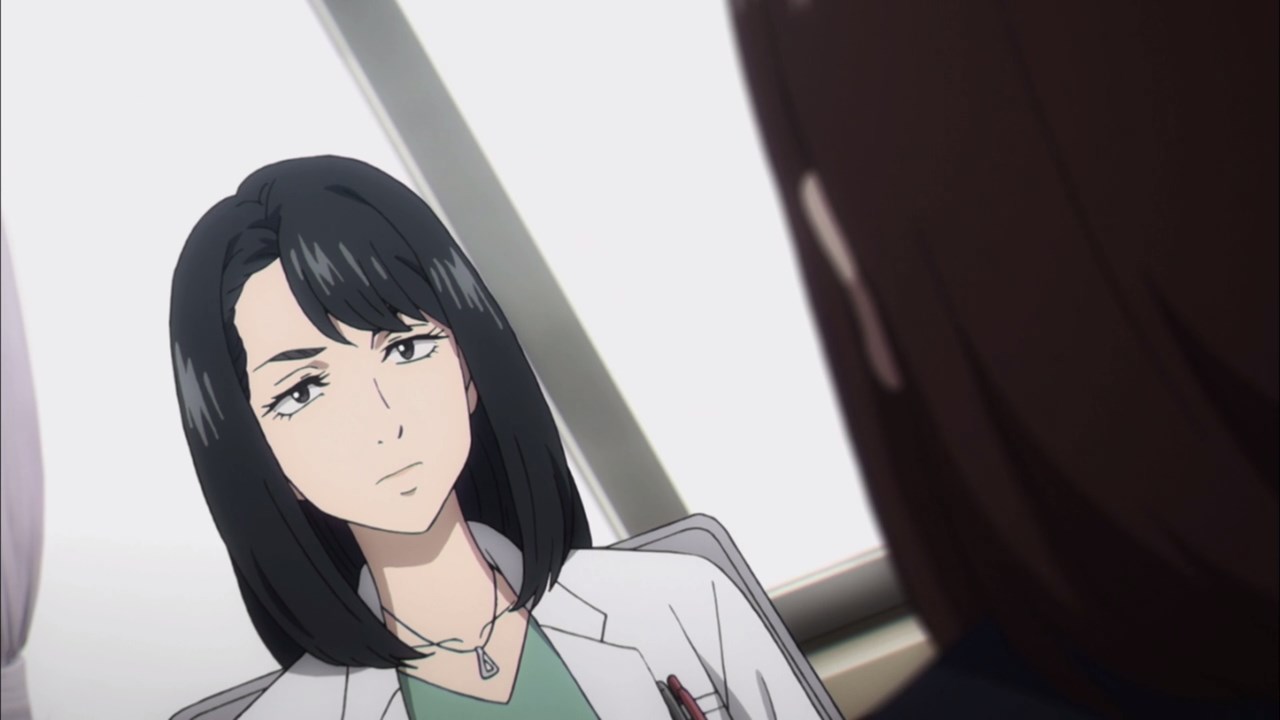 In any case, Dr. Makiko Kisugi took Touka Miyashita and examine her, although Dr. Kisugi is planning to suck Touka’s brains out because she loves to prey on girls who are in fear.

Then again, little did Dr. Kisugi knows is that Touka’s other half is suspecting her of murder. So much that Makiko’s existence is detrimental. 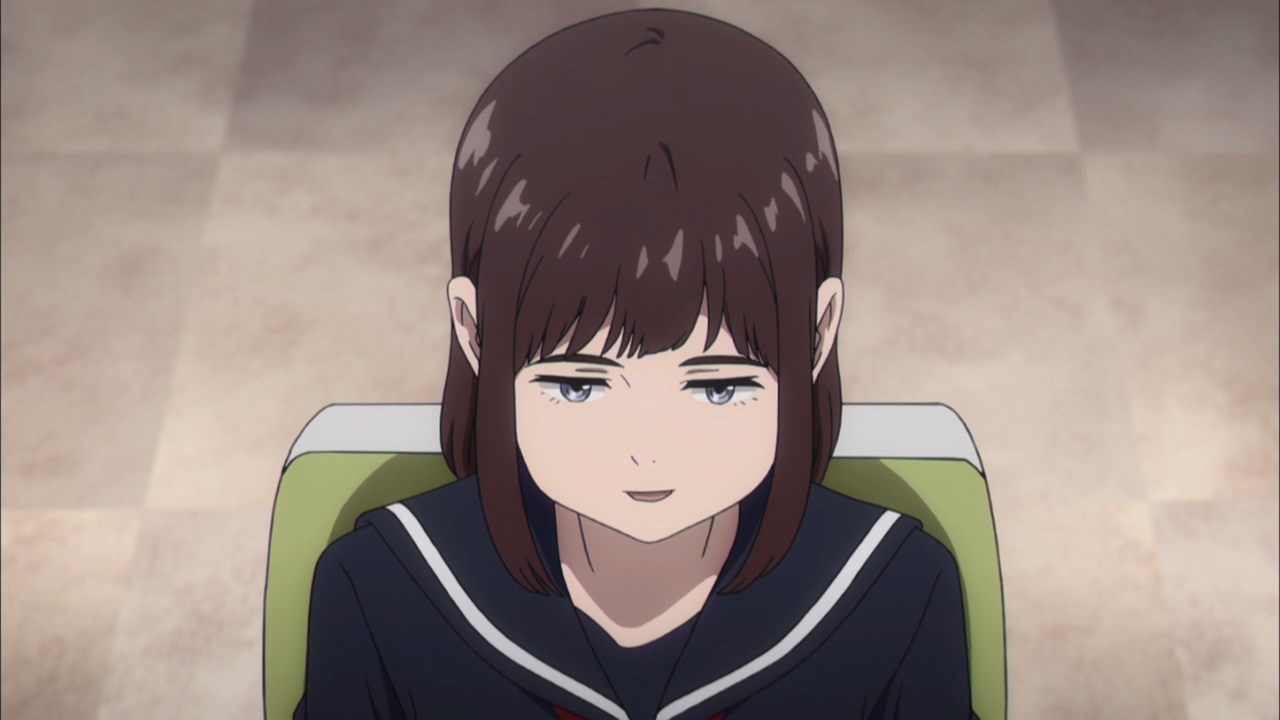 With that said, Touka- I mean Boogiepop declared Dr. Makiko Kisugi as the enemy of the current society. While Dr. Kisugi is surprised that Touka’s other half emerged to declare her as a threat, she doesn’t want to kill Touka yet because Makiko-san wants to savor the fear inside this girl.

Then again, I feel that Dr. Kisugi should kill Touka Miyashita right here because there’s no chance for her once Boogiepop takes over Touka’s body. In any case, tune in next time for the conclusion of this story arc!