The Rising of the Shield Hero Episode #10 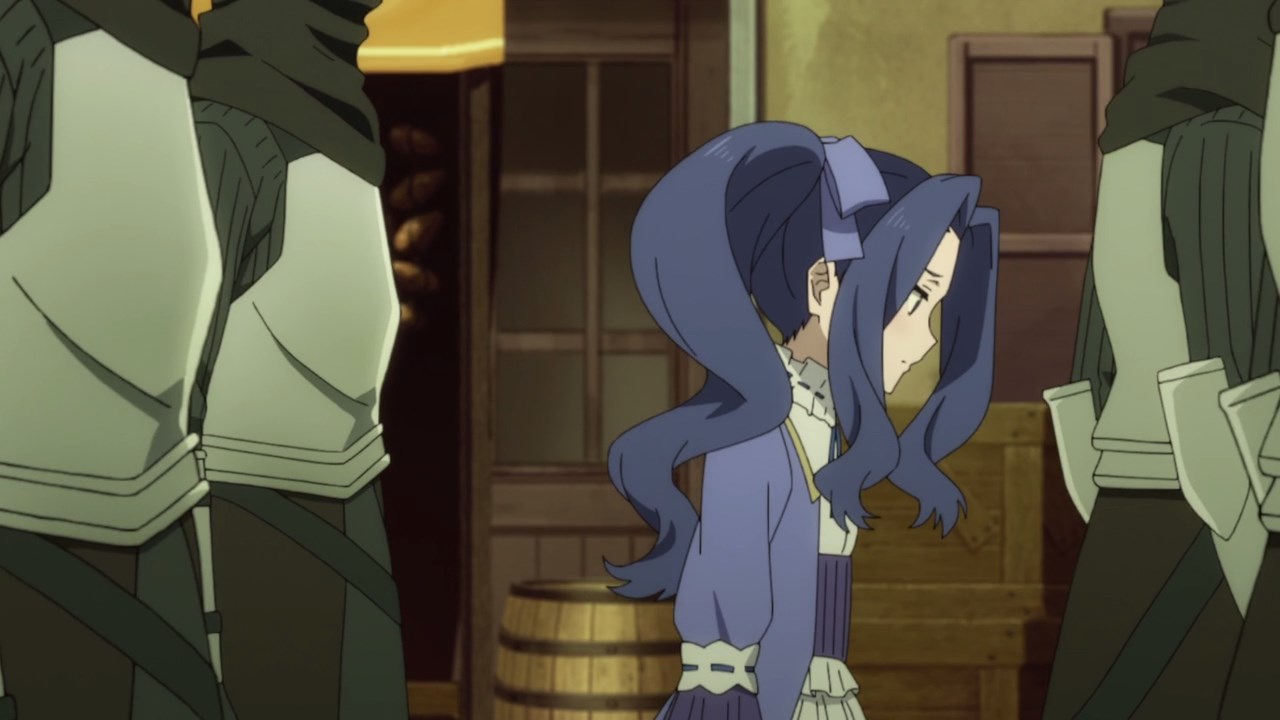 Here’s Melty- Oh sorry, Princess Melty as she’s being escorted by guards after Naofumi Iwatani refused to listen to her.

I’m hoping that I’ll see Melty again because she’s not a bitch princess like Malty. Then again, I wonder what the guards are taking her. 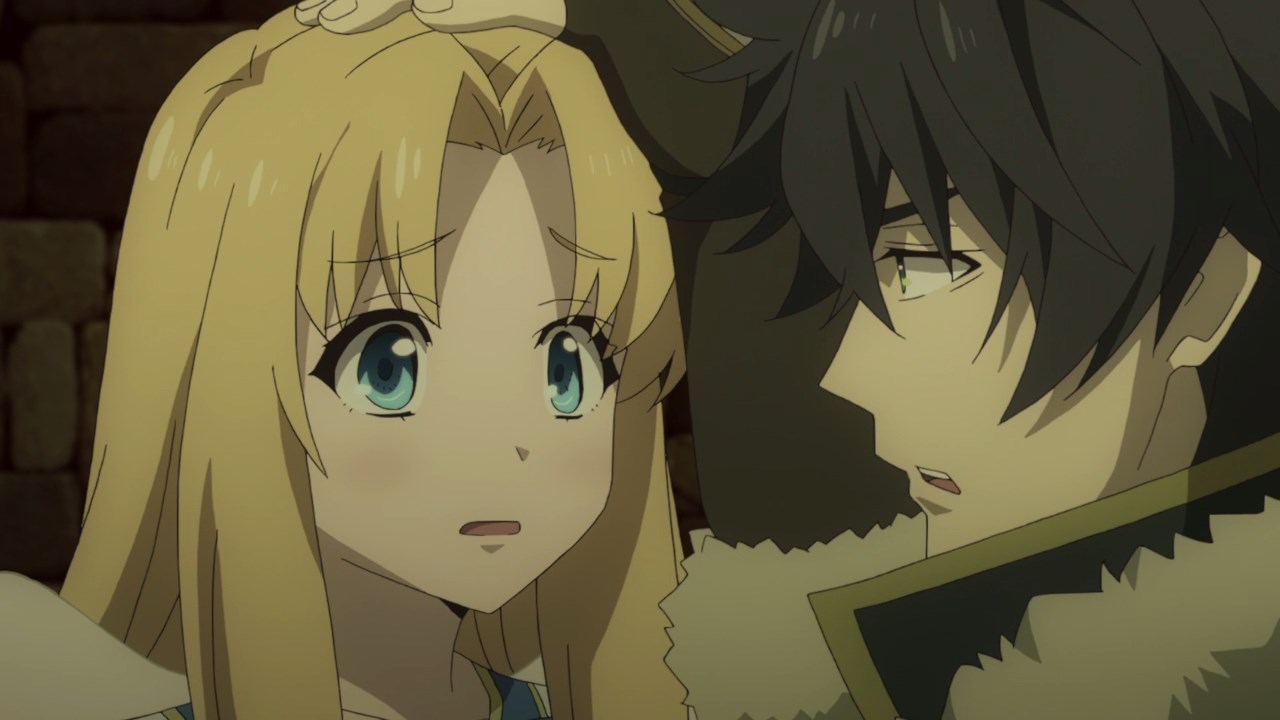 Even Filo-chan is demanding an explanation on why Naofumi told her to leave. Unfortunately for Filo, the Shield Hero told her to stay away from Melty.

Sorry Filo-chan, but it’s very complicated as the Shield Hero has bitter feelings towards the Melromarc royal family, especially both the King and Princess Malty. 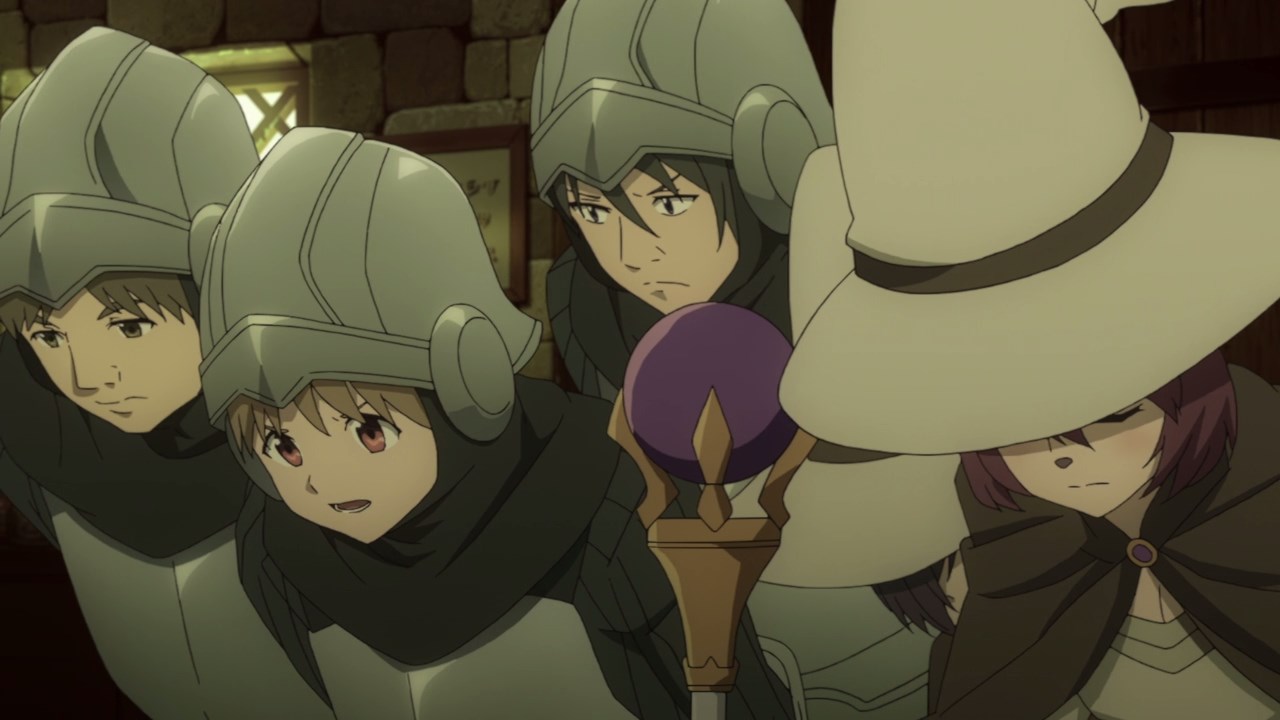 Meanwhile, some soldiers wanted to join Naofumi after his stunning bravery during the first wave. Well, he defended Lute Village because people die when they’re killed by monsters. 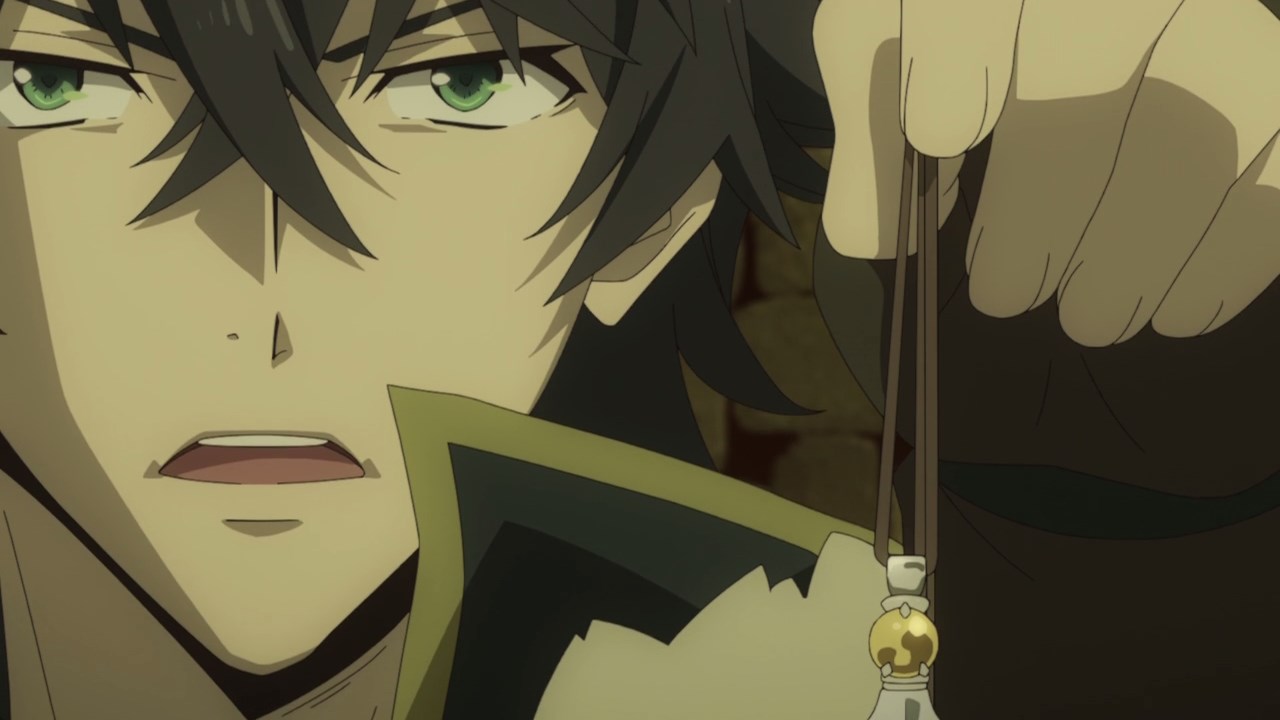 However, the Shield Hero demanded 150 silver coins in exchange for his service on the second Wave of Catastrophe, plus an accessory as a bonus.

C’mon, it’s not cheap to hire one of the Cardinal Heroes. And second, Naofumi doesn’t like getting swindled ’cause he’s gonna kill anyone. After all, he has “Muh trust issues!” and the like. 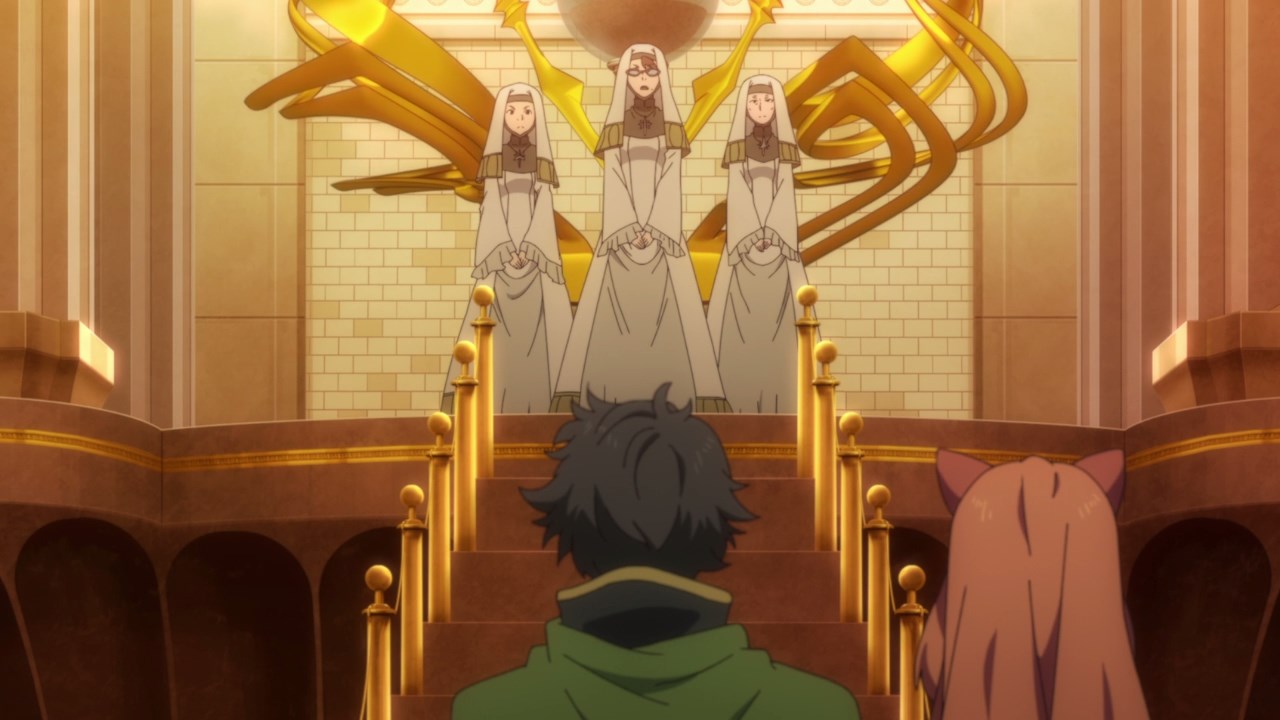 Speaking of the upcoming Wave, time for Naofumi and Raphtalia to move up the ladder as they enter a temple and pay 15 gold coins for a class upgrade.

Unfortunately, this temple refused to entertain the Shield Hero because of his bad reputation. Fuck them, might as well consult the Slave Trader instead! 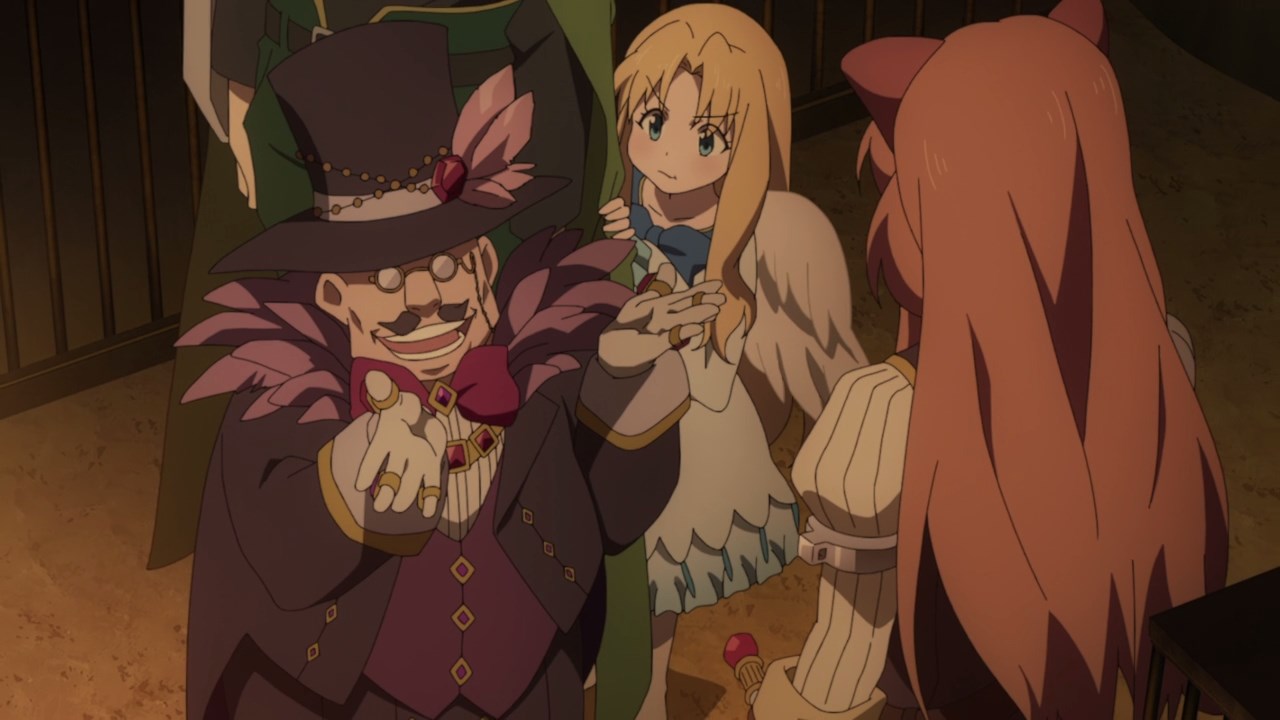 Unfortunately, the Slave Trader can’t issue class upgrades because he sells slaves and other familiars. But, he found another temple where Naofumi and Raphtalia can change their classes without any fuss.

That temple is located at Shieldfreeden where that country is friendly towards demi-humans. However, going to Shieldfreeden for an upgrade will take 2 weeks by ship and a month by a wagon. C’mon, the Shield Hero and his party can’t afford to miss that. 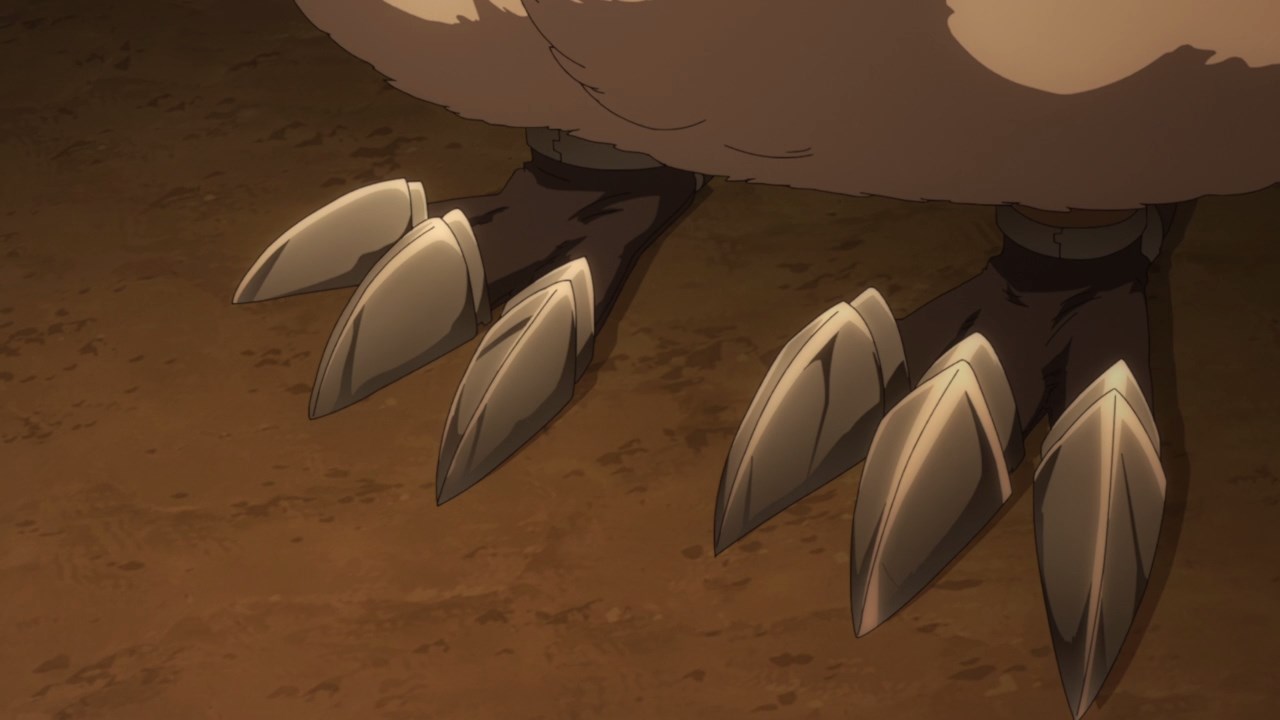 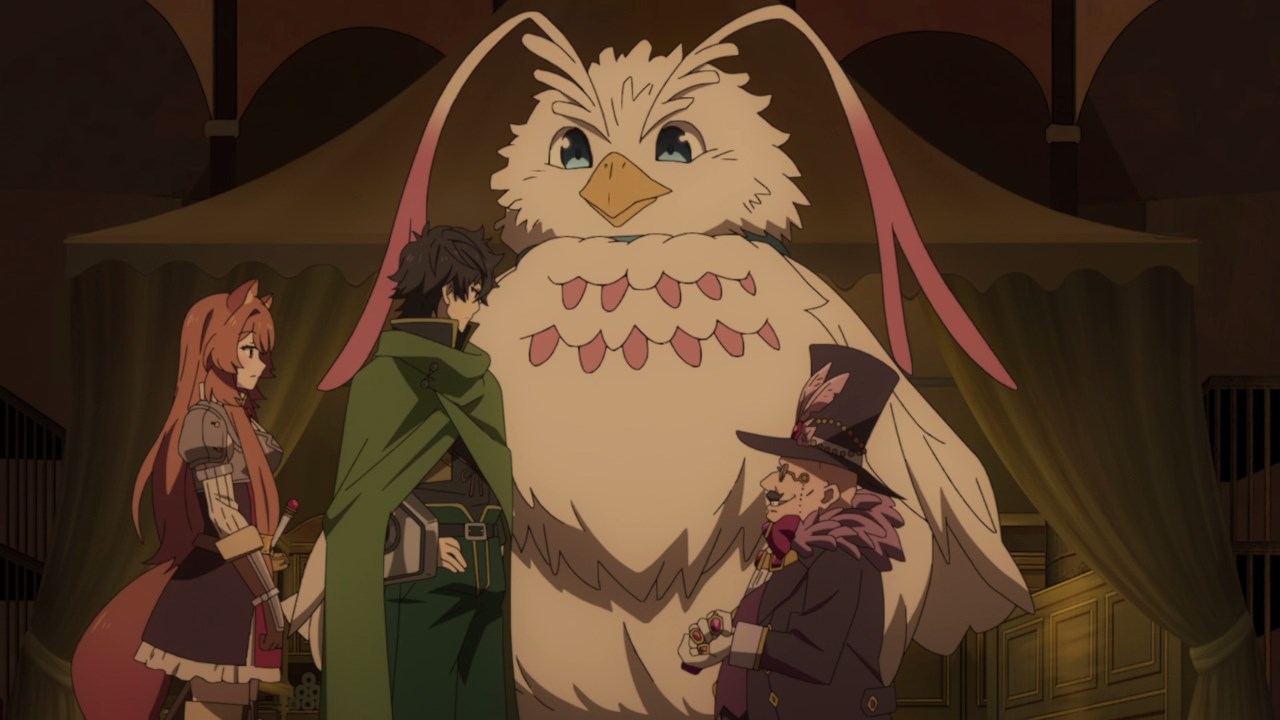 On the other hand, the Slave Trader offered some upgrades for Filo like a pair of wyvern talons. Let’s hope that it’ll be useful for the upcoming Wave. 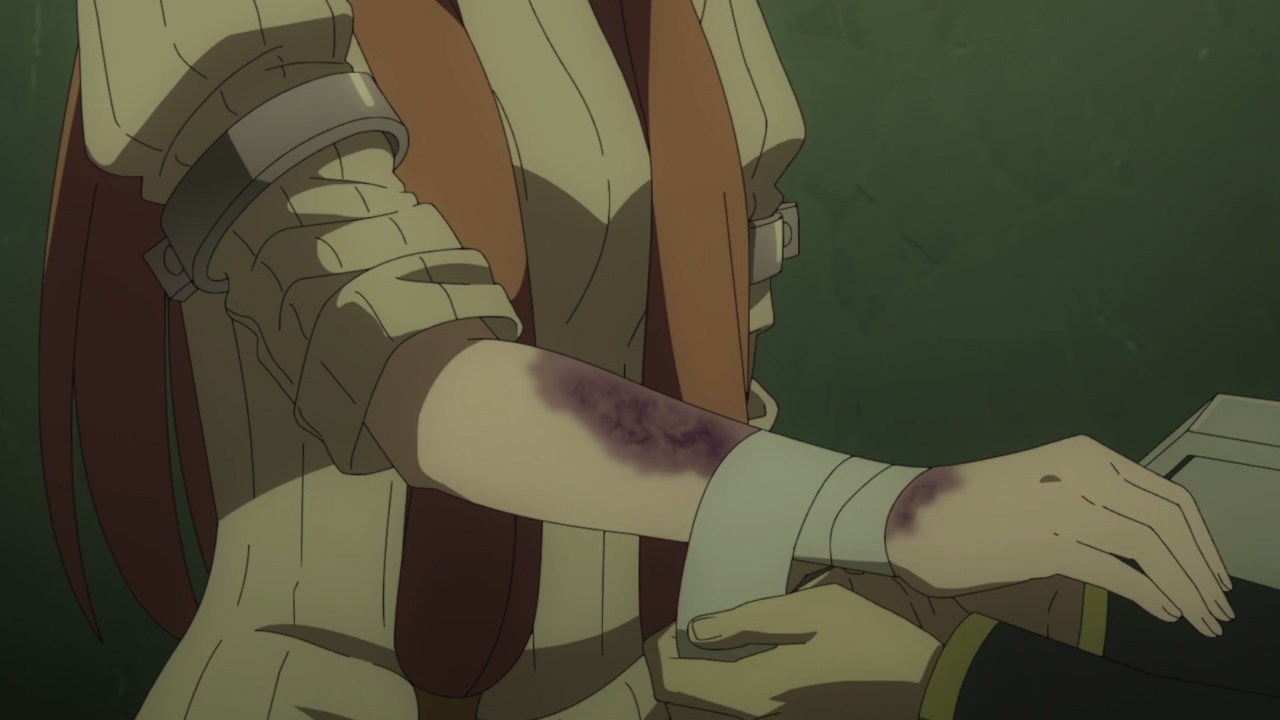 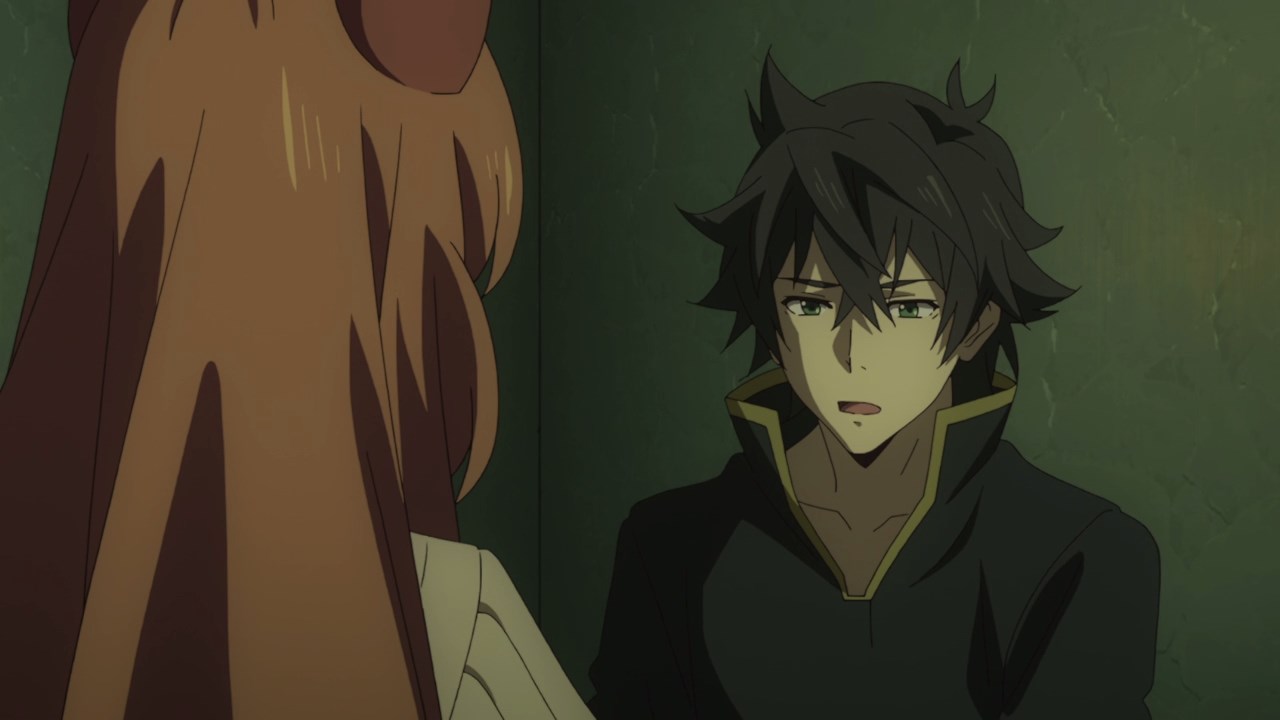 And lastly, Naofumi needs to put the holy water into good use as he soak the bandages and apply it to Raphtalia. Then again, I doubt about the effectiveness of the holy water.

By the way, seems that Raphtalia wants to join Naofumi on his return to the real-world, once he’s done defending the world from demons. Then again, he has no time for such trivial things at the moment because the second Wave is coming. Once the second Wave is over, Naofumi might have a talk about it. 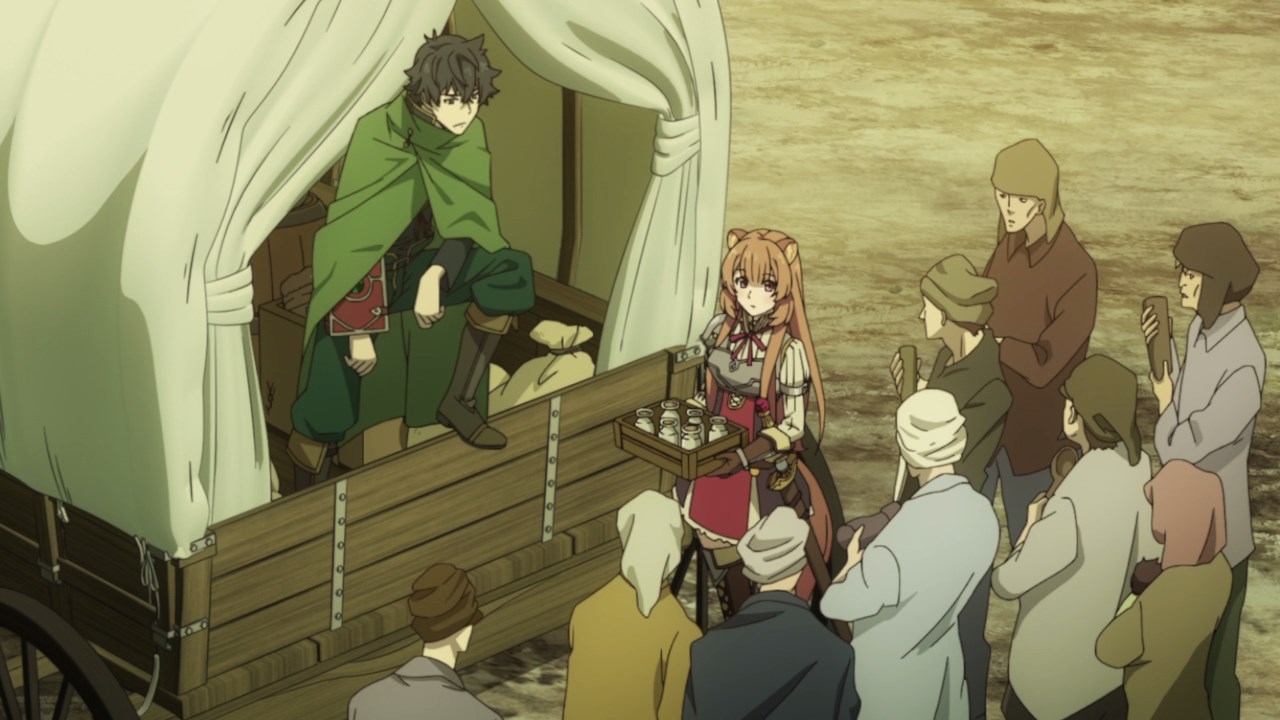 Now then, it’s time for the Shield Hero and his party to travel to various places before reaching Shieldfreeden. Along the way, they stumbled upon a group of refugees from the north. 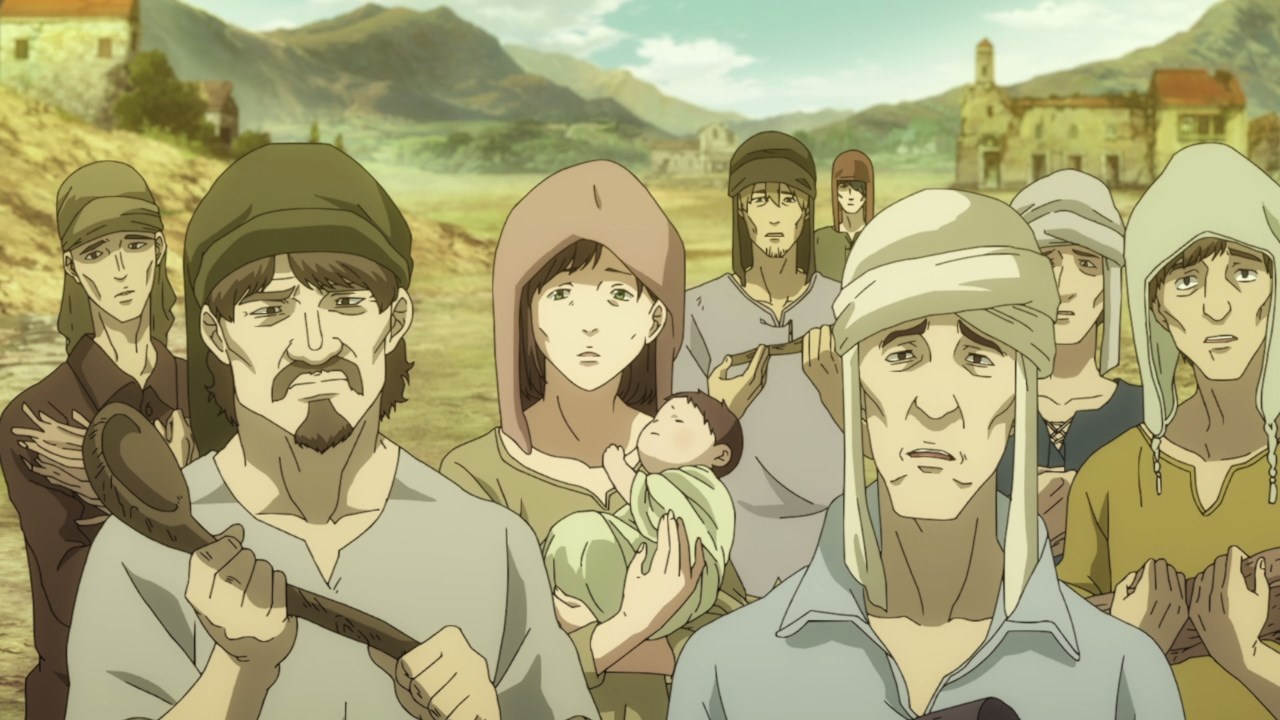 As you can see, they’re trading up anything in exchange for food because it turns out that they’re fleeing their own country from a ruthless resistance leader, who just happened to be the one who ousted a ruthless monarch on that country.

And do you know why they’re fleeing? Because both the previous and current leader is raising taxes which affects the entire country’s population, hence most of them flee from the north. Oh, and do you know who helped the resistance leader on ousting the king? Why it’s none other than Itsuki Kawasumi, the Bow Hero who doesn’t know anything to solve the root cause of the country apart from taking down a cruel king. C’mon, he and the rest of the heroes treated this world as a video game, so it’s no surprise there. 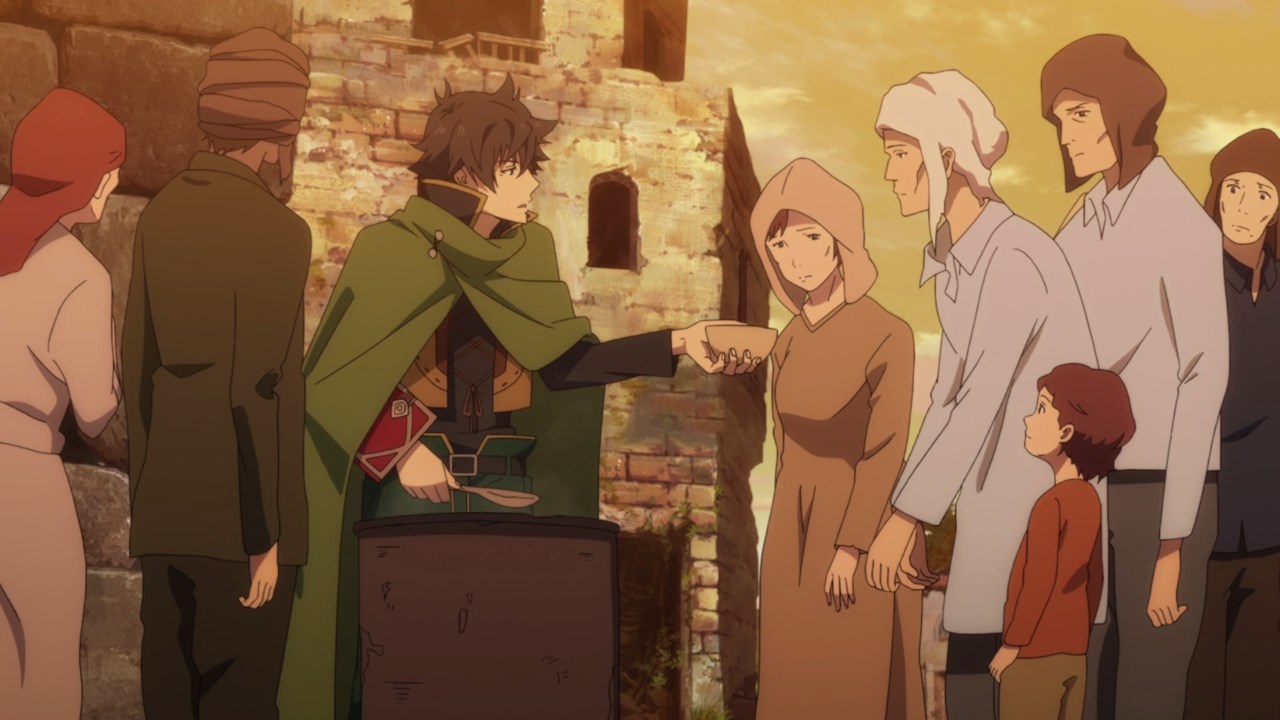 And so, Naofumi Iwatani decided to do a humanitarian mission by setting up a soup kitchen to feed the refugees. I bet that Itsuki can’t do it because of his video game logic. 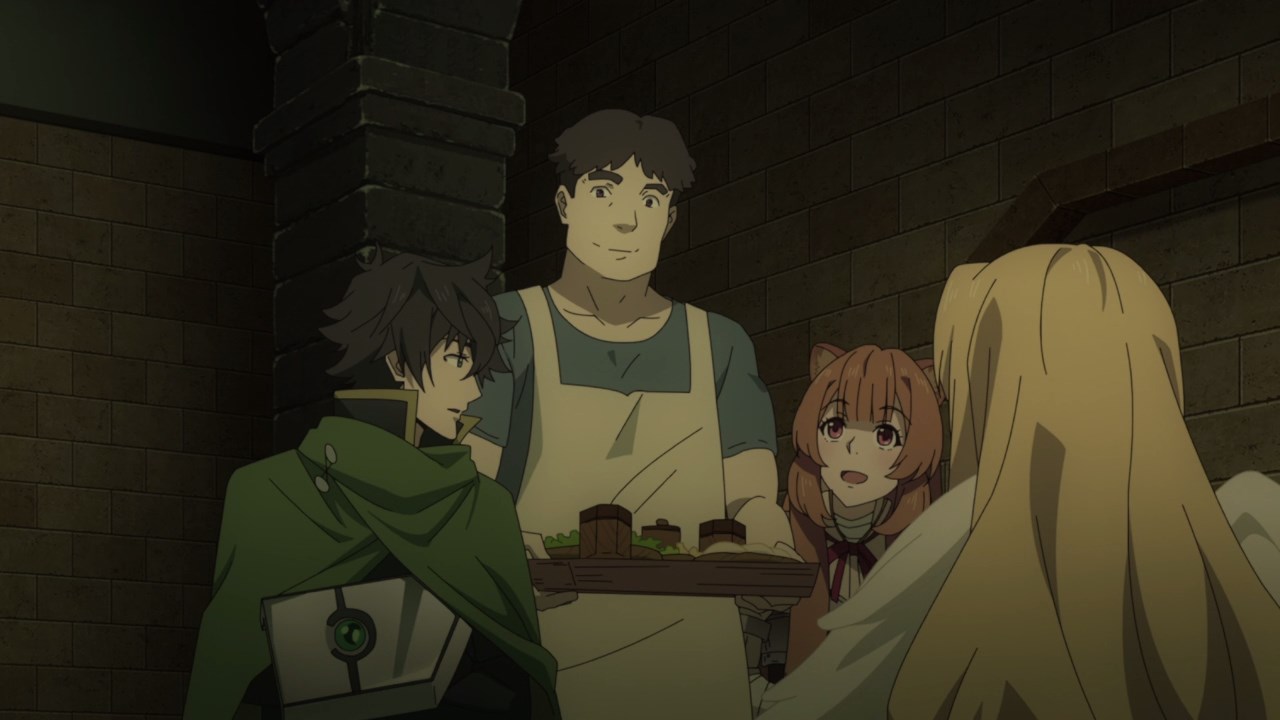 Afterwards, Naofumi went to a local pub to grab some food to eat together with Raphtalia and Filo. After all, the second Wave of Catastrophe is coming in less than 24 hours. 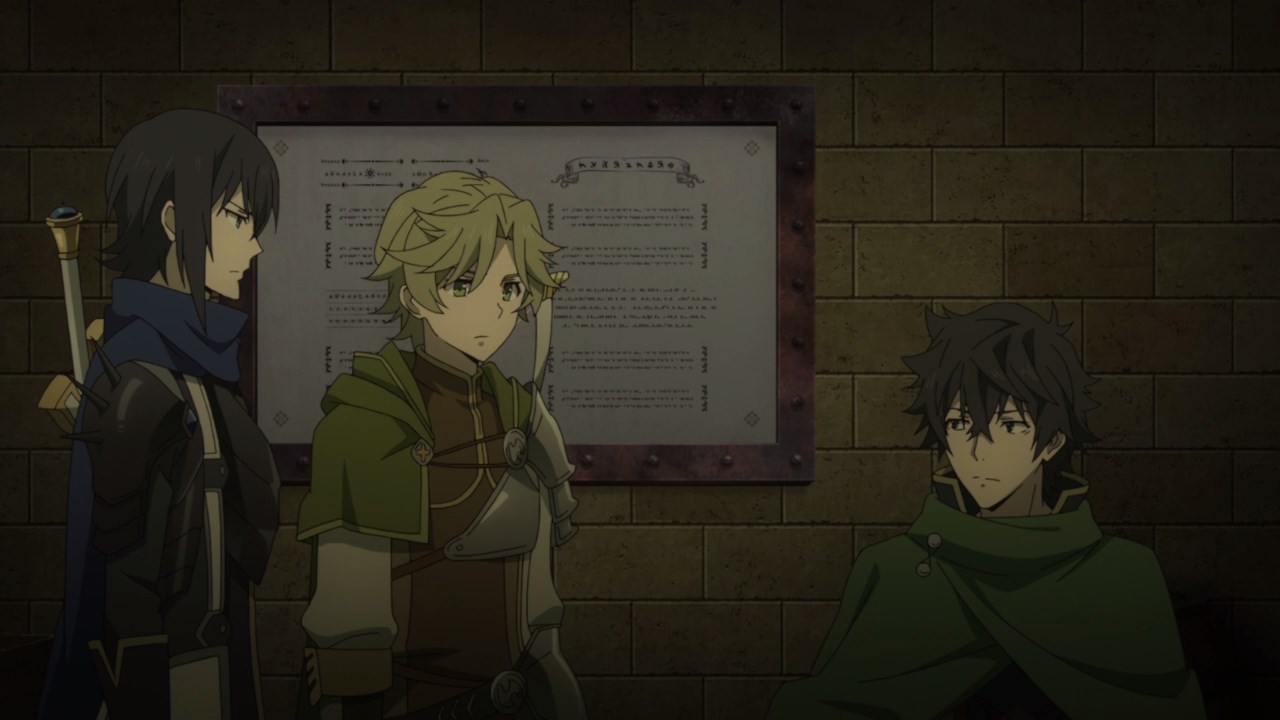 Then, both the Sword and Bow Hero approached the Shield Hero, accusing him of impersonating them and stealing their rewards.

Um Ren Amagi and Itsuki Kawasumi, before you accuse Naofumi Iwatani of identity and reward theft, have you done a great job when you took your respective quests? If you said yes, then you’re lying to yourself! 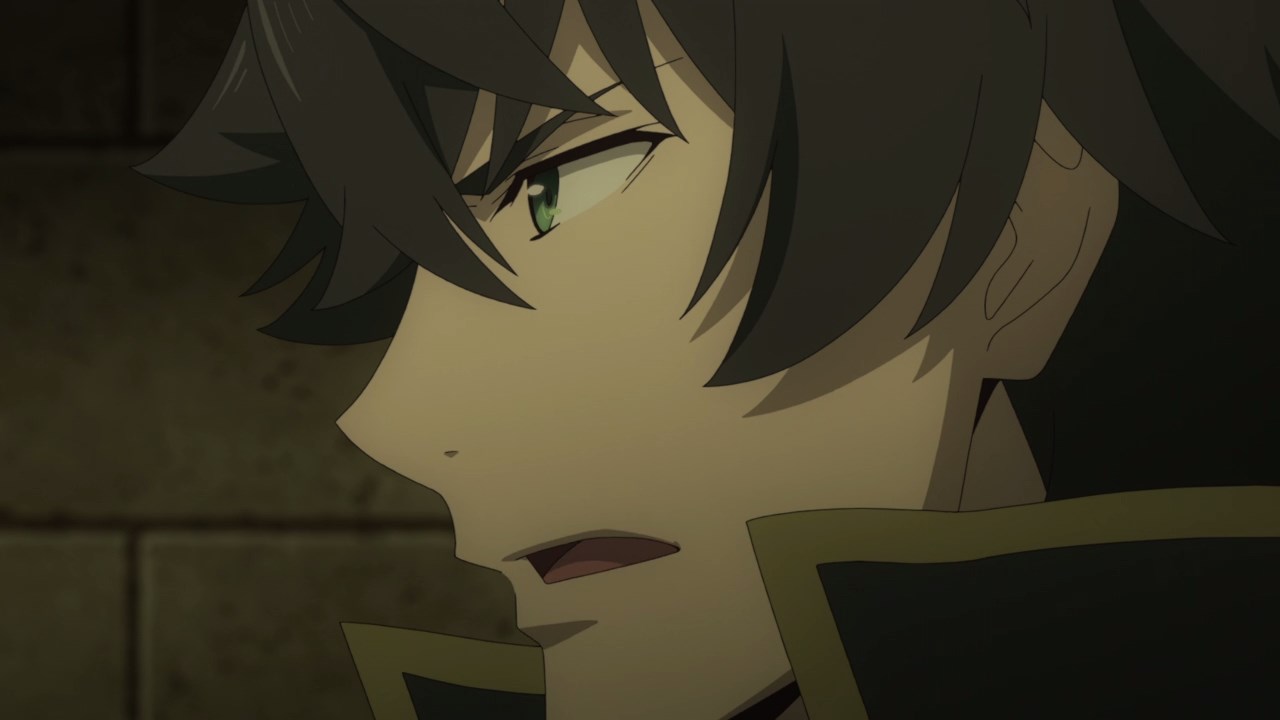 In fact, Naofumi told Ren and Itsuki the consequences of their actions, ranging from an environmental hazard for not disposing the dragon, to humanitarian crisis when changing the leader doesn’t solve the root cause of those high taxes. 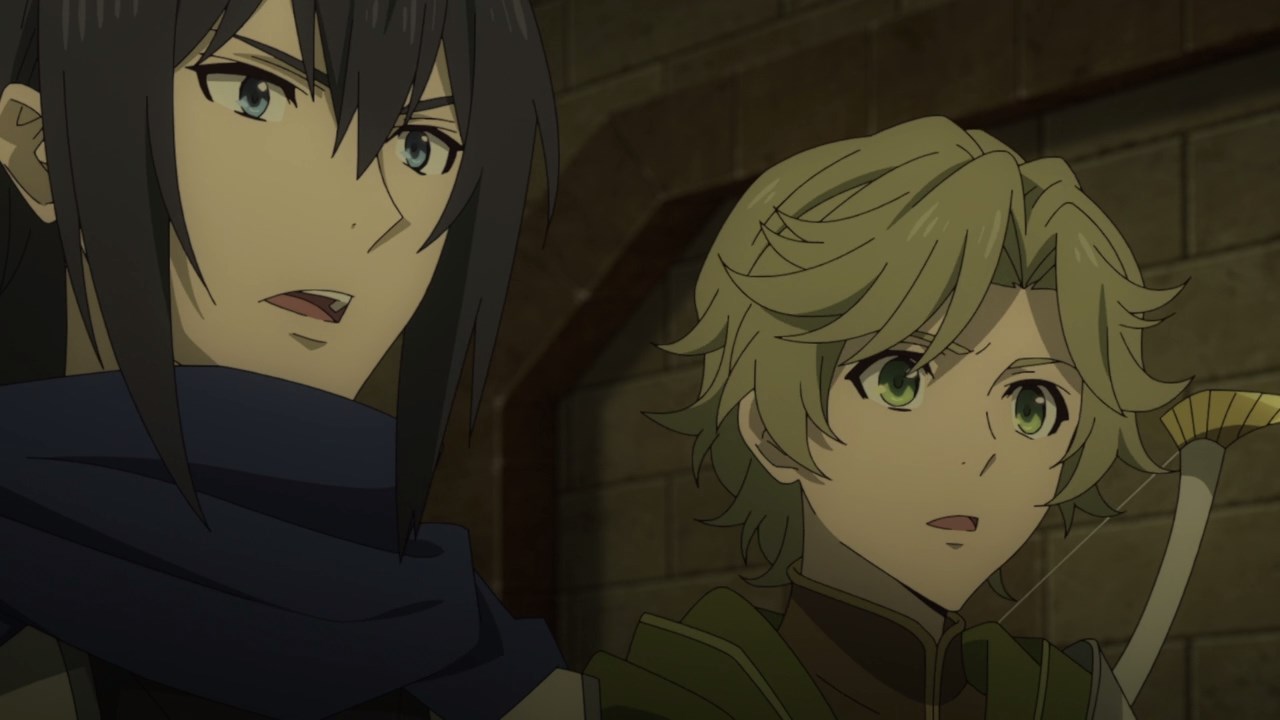 But as you can see, both Ren and Itsuki are shocked to hear Naofumi’s words. While Amagi understands the errors that he caused, Kawasumi doesn’t believe at Iwatani.

Well, that’s okay because they’ll learn their mistakes the hard way. Oh, and I’m not gonna bother lecturing Motoyasu Kitamura because he doesn’t learn a damn thing, including his mistakes! 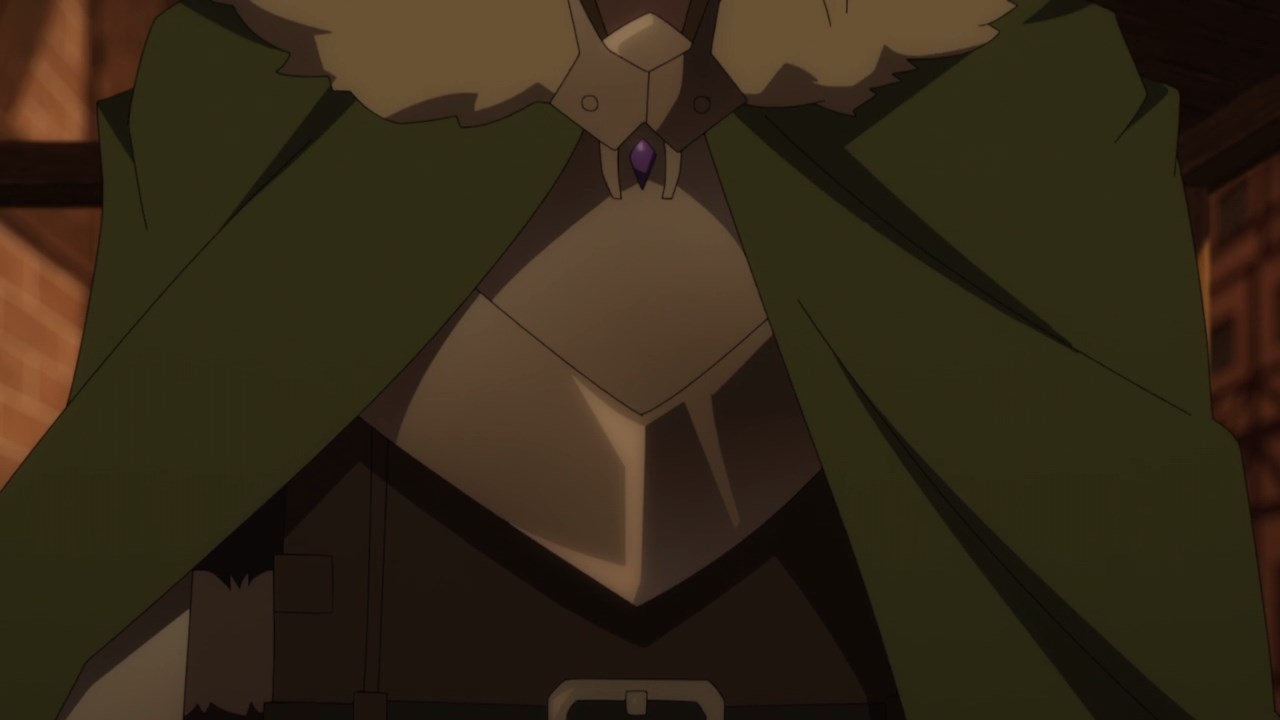 Now we’re getting closer to the second Wave and unfortunately for the Shield Hero, he’ll have to postpone his travel to Shieldfreeden.

However, seems that the Blacksmith modified Naofumi’s Barbarian Armor by inserting the zombie dragon crystal, which granted auto-repair functionalities. 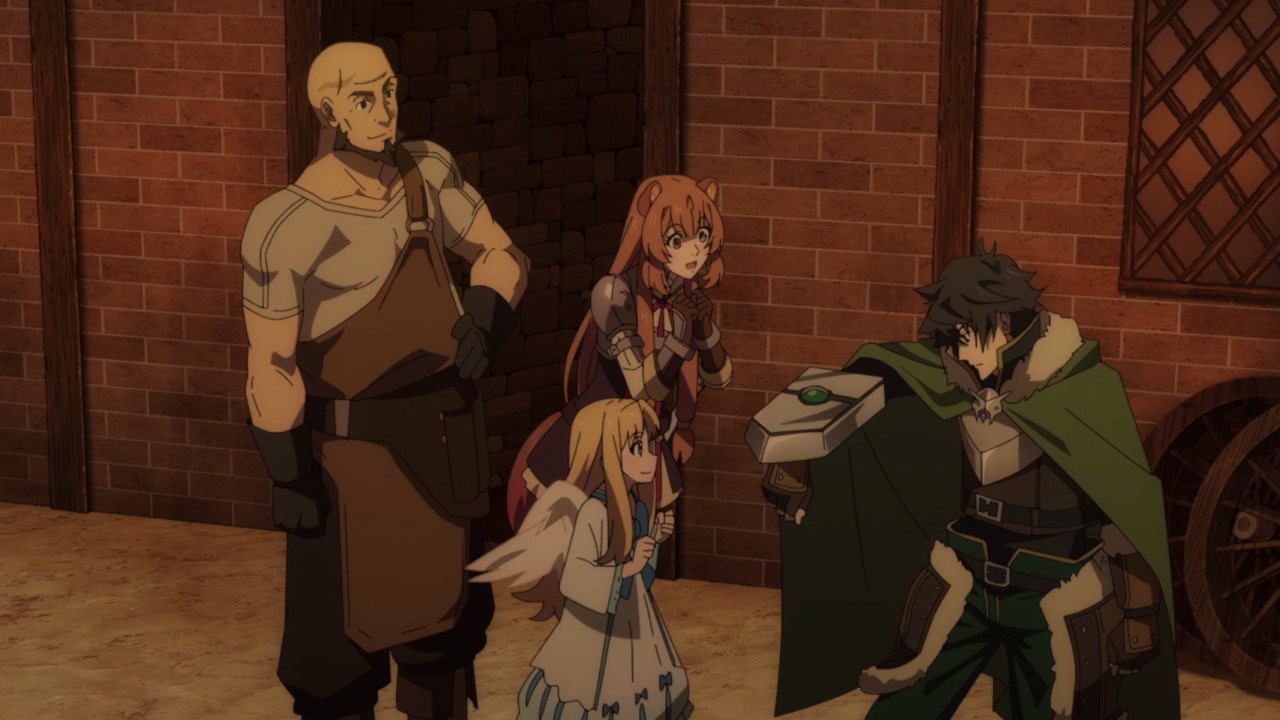 Basically, Naofumi’s armor won’t have to spend money on repairs anymore. Then again, I wonder how fast it can repair his armor, especially during the heat of a battle? 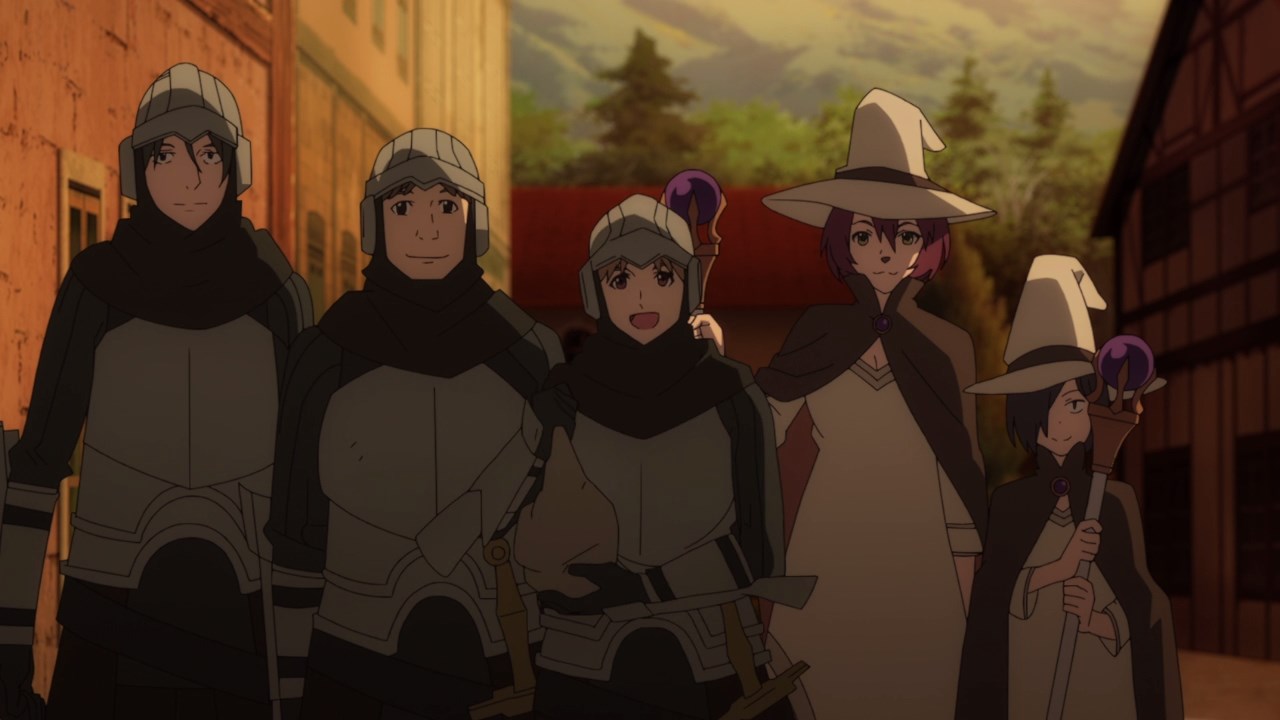 Lastly, looks like these soldiers scraped 150 silver coins in order to join the Shield Hero. Now that’s dedication there! 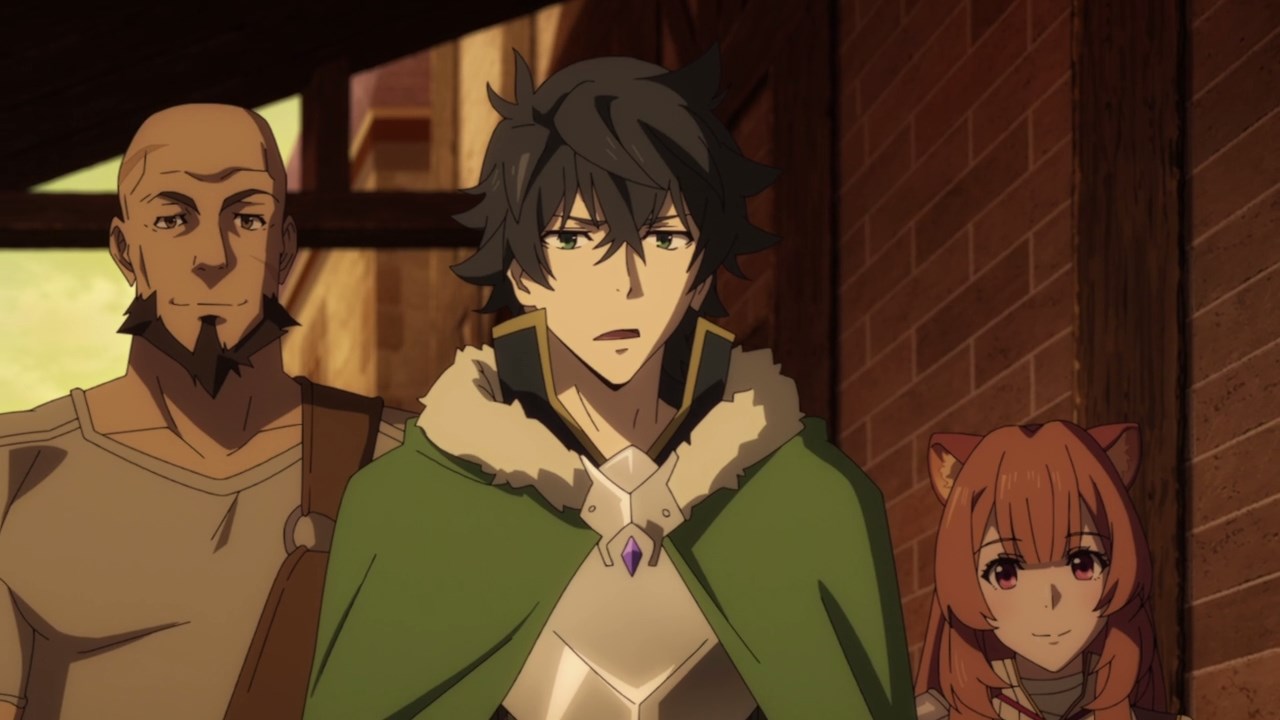 However, Naofumi told them to use that money on buying better equipment. But the good news is that he accepts them as his allies, but Naofumi warned them not to backstab him in the back or they’ll pay in blood! 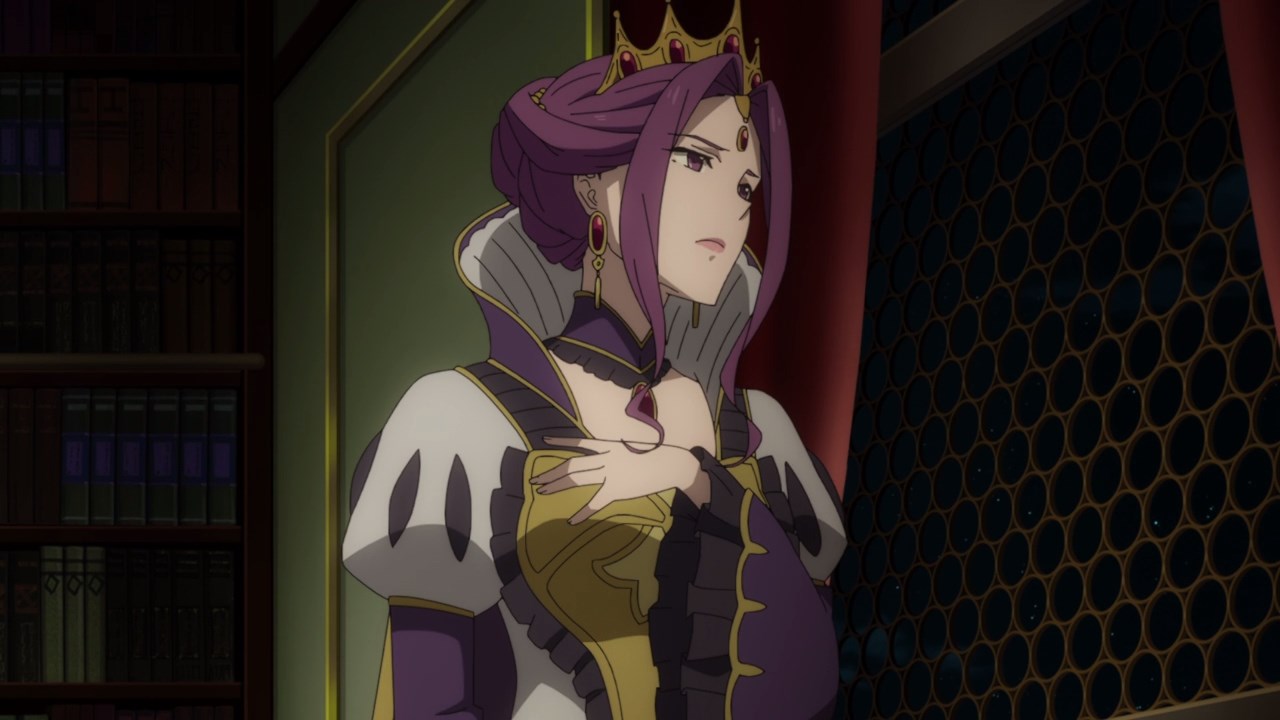 Meanwhile, here’s the Queen of Melromarc as she’s worried about her daughter Melty as well as the Shield Hero, but the Queen is still dealing with internal affairs that affected the kingdom so she’s not yet coming back to the kingdom.

And with the 2nd Wave of Catastrophe coming around the corner, the Queen can’t go outside for a while or she might get killed. 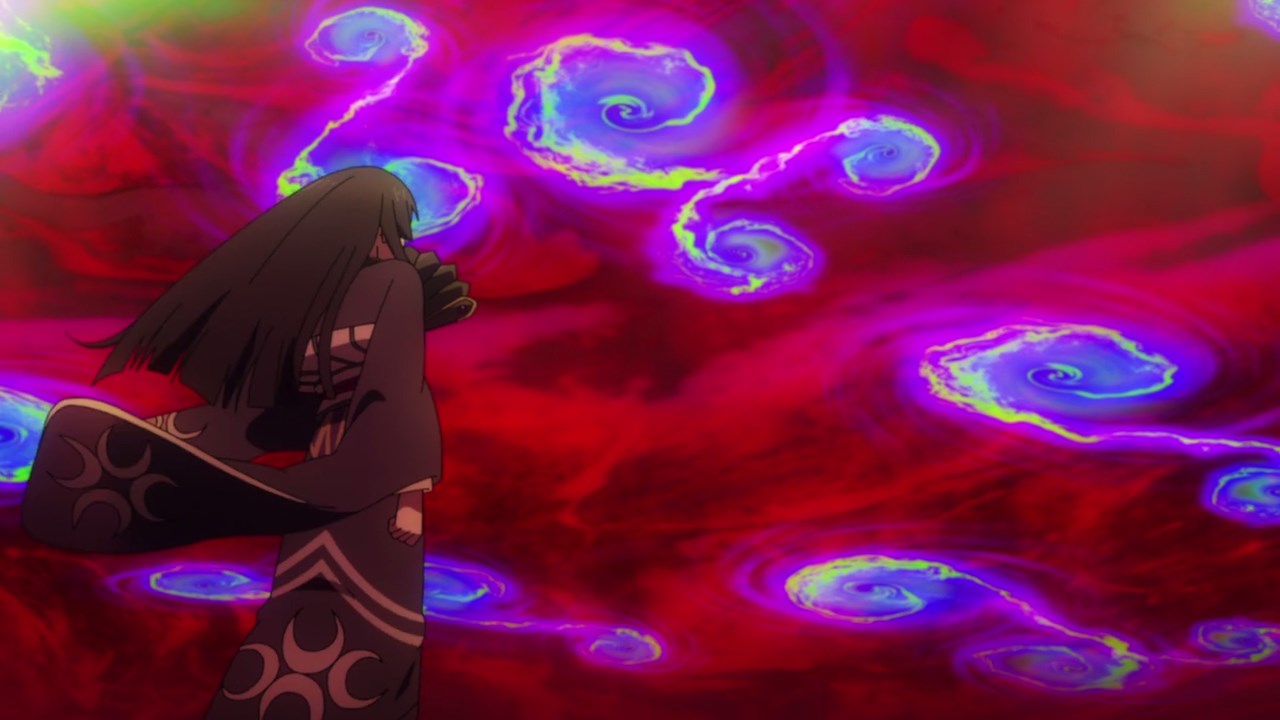 Anyways, looks like I’ll end this post as the second Wave of Catastrophe has arrived. But then, this character showed up at the end of this week’s episode.

Is she a friend or a foe? We’ll find that out next time as everyone will be ready to slay some monsters!