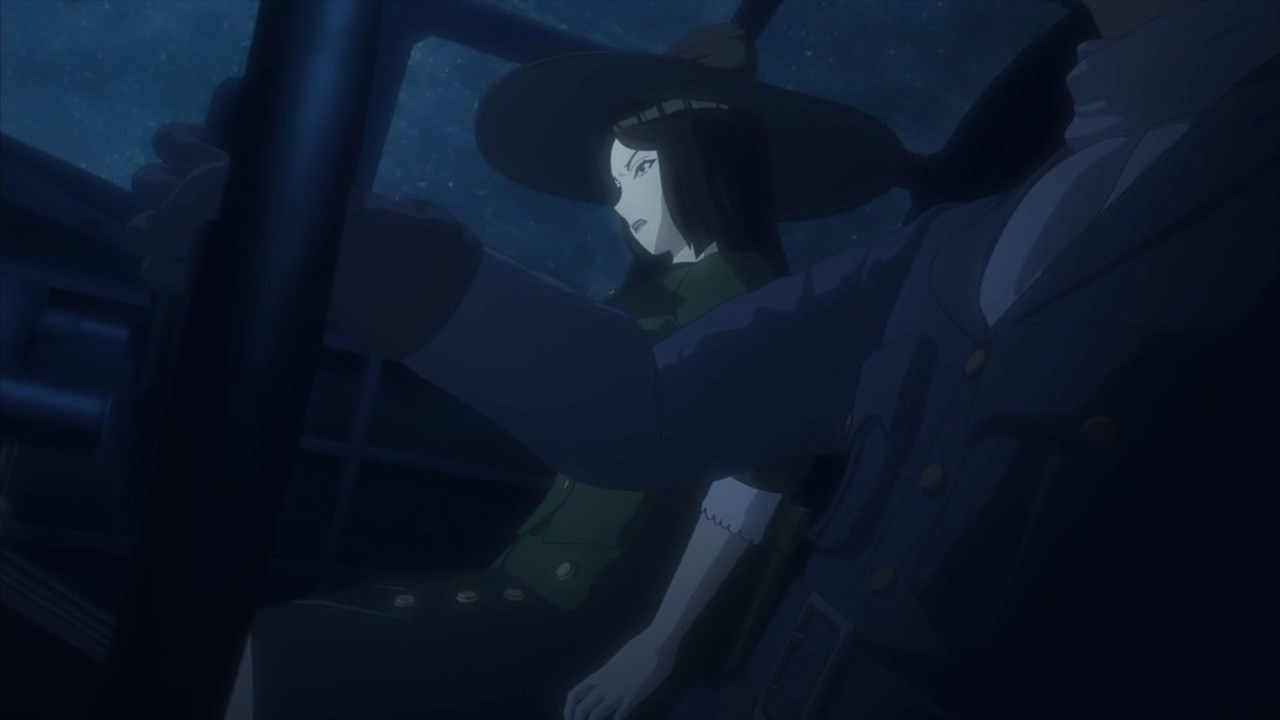 Here’s Julia, the now-deposed councilor is now fearing for her life as she’s running away from the authorities, which Julia believes that they’re Isao’s henchmen.

But speaking of Isao, it appears that he’s showing his true colors as he’ll control Ijitsu by forcing other nations to join his Brotherhood of Freedom Union. But what does he have to do with the holes appearing in Ijitsu and the Standon Oil Company? 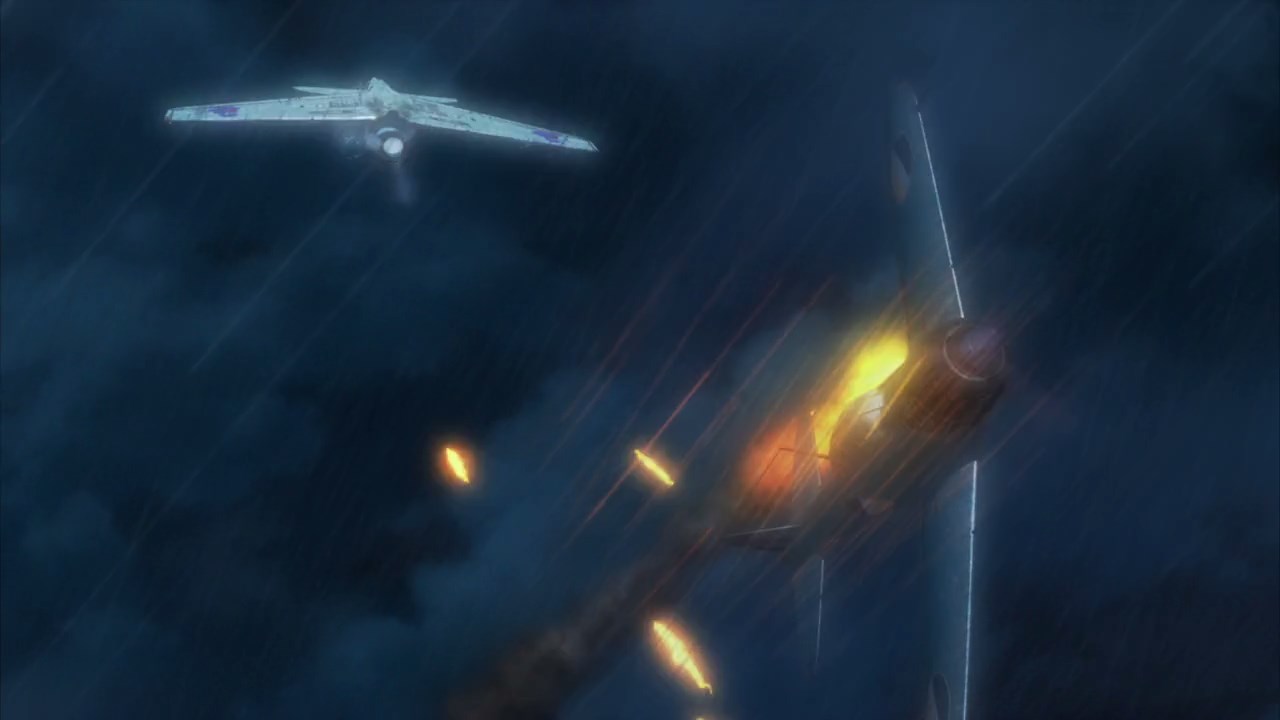 For now, Julia will have to get out from this enemy squadron, but luckily this snake-livery plane has arrived to shoot Isao’s men down with ease. Then again, I wonder if this plane is either a friend or foe. 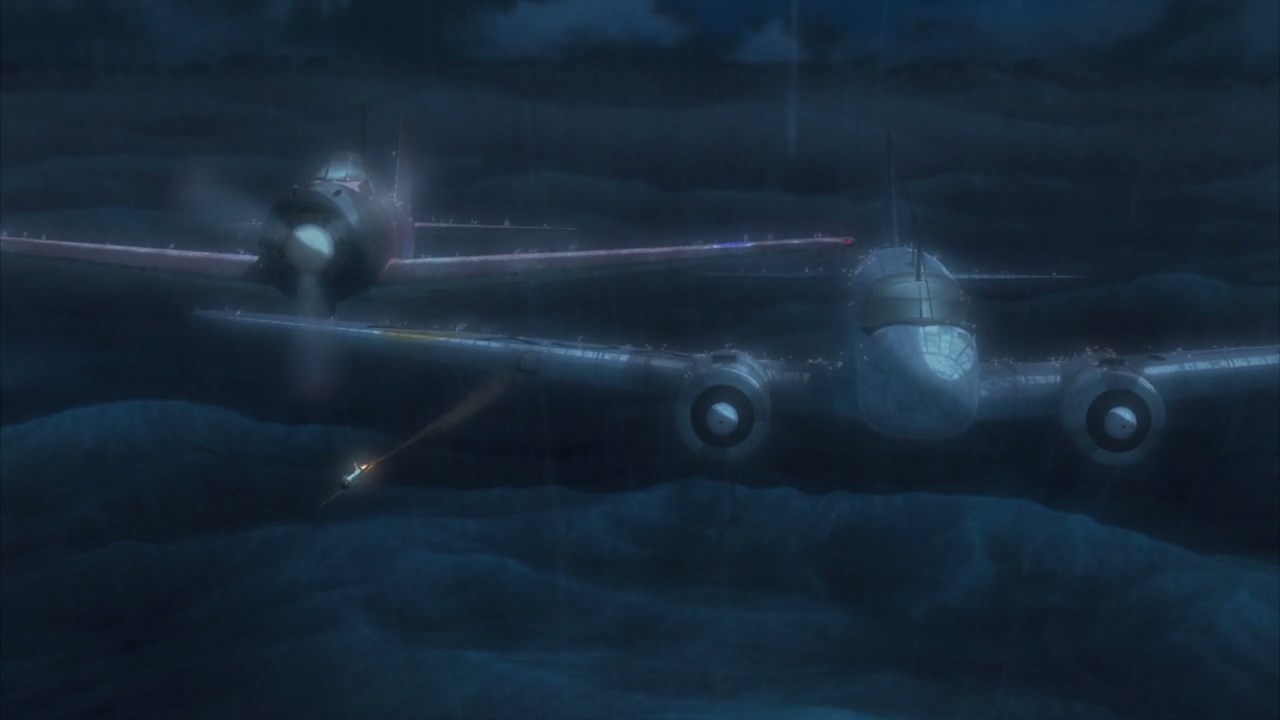 But hey, at least the former councilor is safe as she’ll have to deliver the bad news to the Kotobuki Squadron, whether they’ll like it or not. 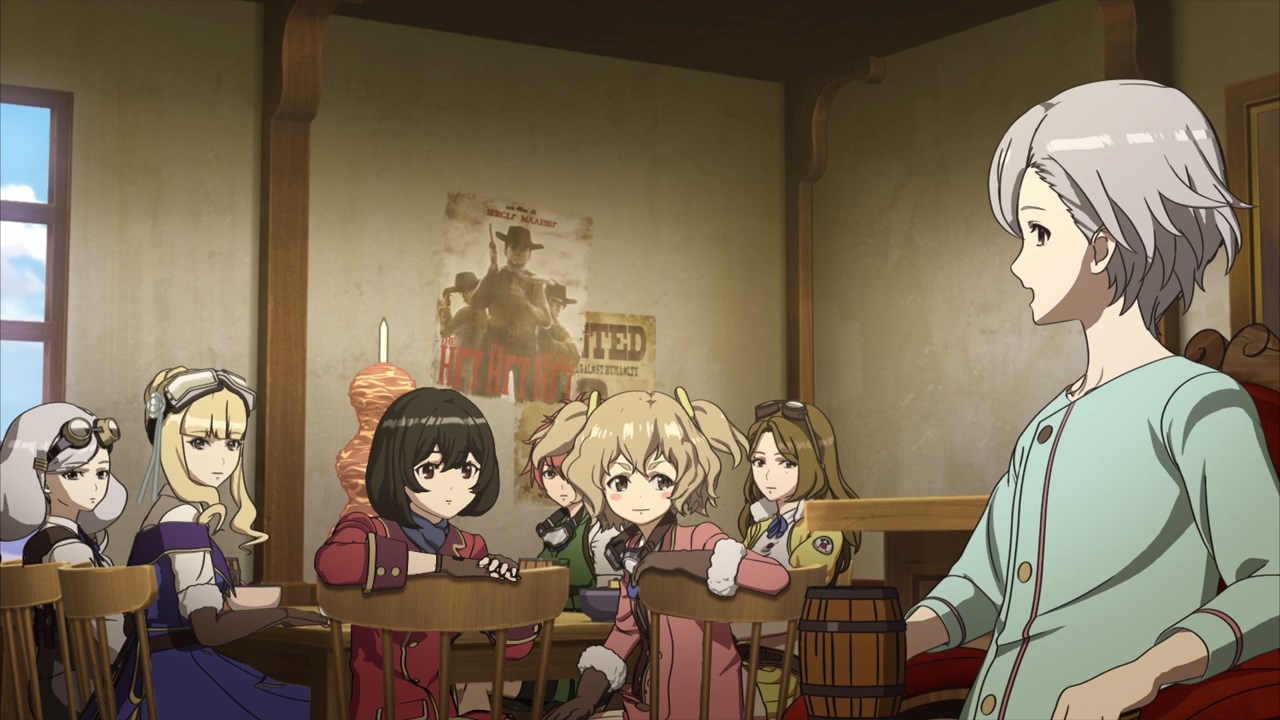 Speaking of the Kotobuki Squadron, they’re just chilling out with Allen inside the Hagoromo. Of course, Allen is worried that the holes leading to Yufang are being guarded by someone else.

I bet that Isao is trying to control the holes for himself so that he can get his hands on Yufang technology, much like how that guy from Episode 6 is recruiting Ol’ Sabu to make planes for him. Come to think of it, Isao’s butler might be the man from Ep. 6. 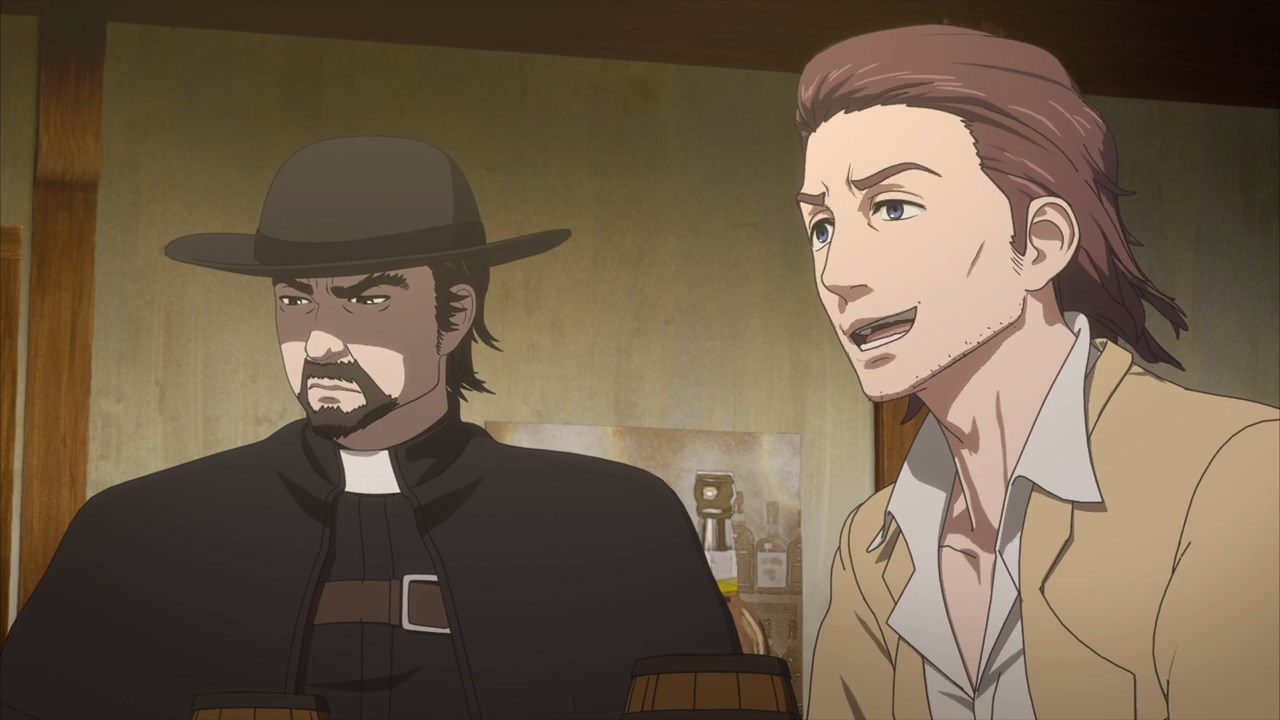 Meanwhile, here’s Fernando Utsumi and Adolfo Yamada as they’re chilling out. Then again, it would be better if they spend time recruiting young pilots to rebuild their Nazarere Squadron. 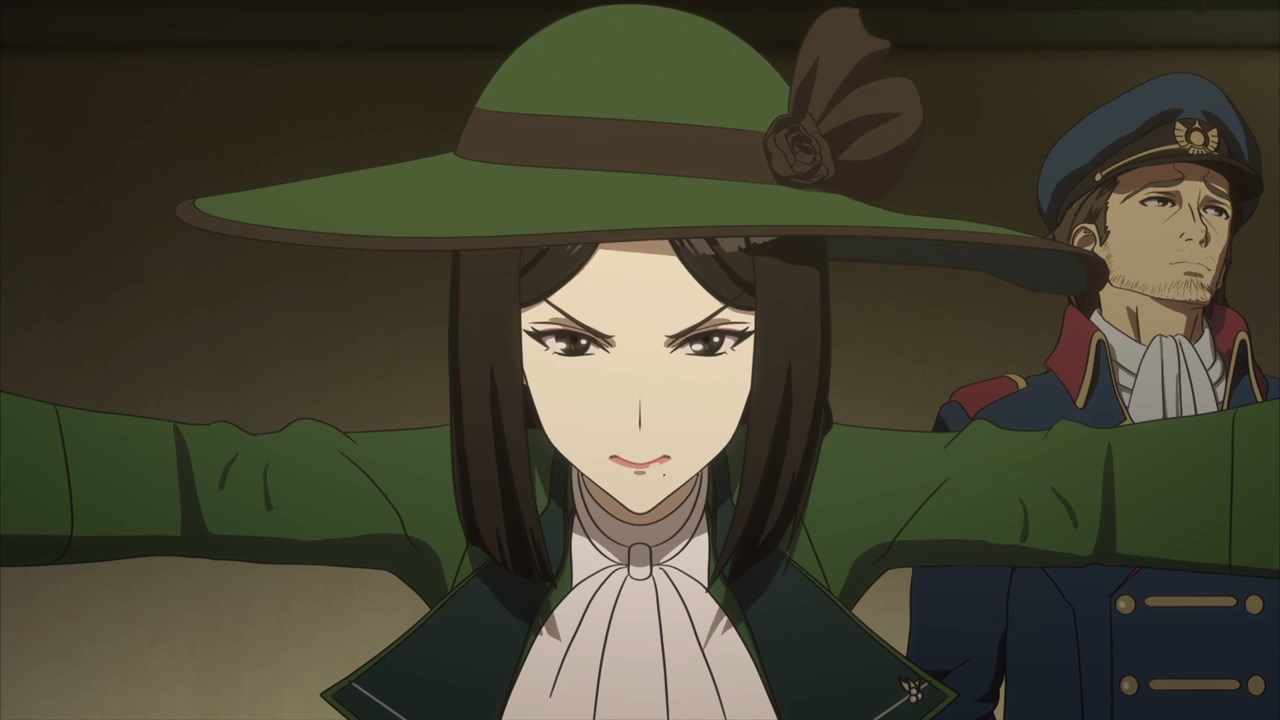 Anyways, looks like Julia has arrived at Hagoromo and she’s really pissed that those idiots ratted her out of office. Of course, this is just the beginning. 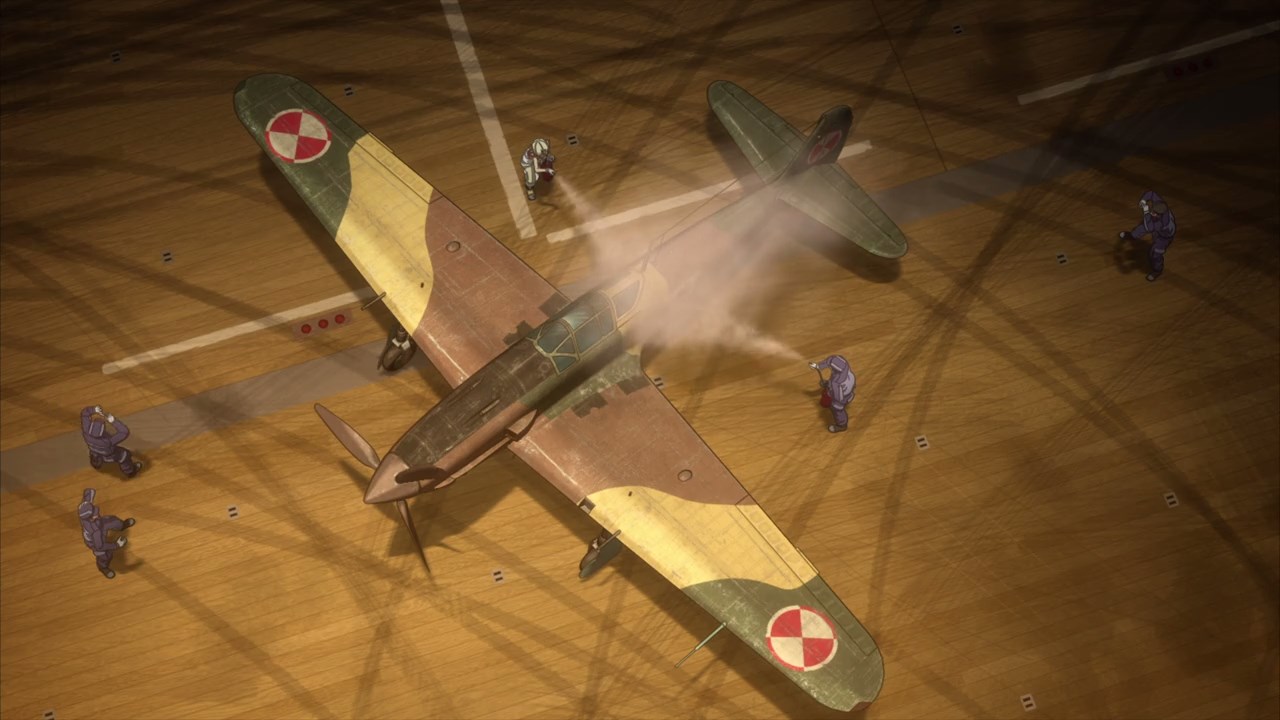 In fact, the Hagoromo got another visitor as it crashlanded inside the airship. Still, they need to be cautious since their airship got hijacked recently, so they can’t afford someone taking over the Hagoromo. 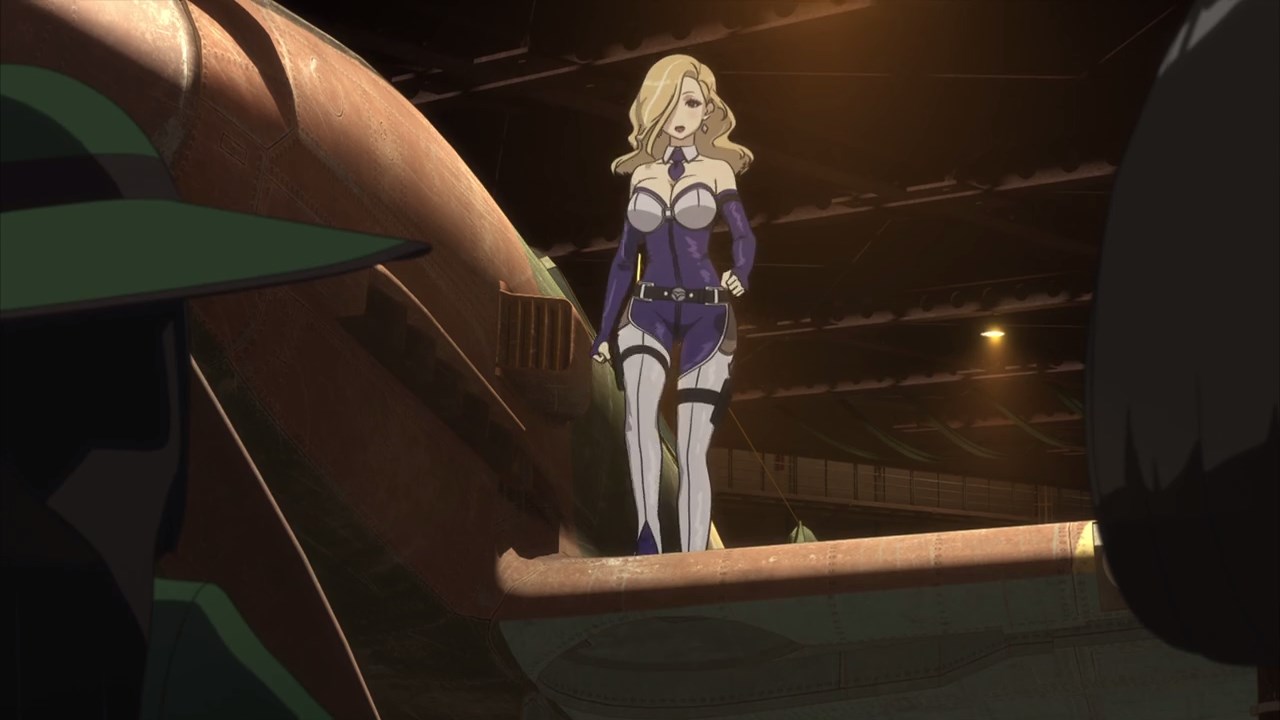 Now then, I would like you to meet Camilla from Shouto as she delivered the bad news that her town was wiped out by the Ikesuka Air Force.

Not only that, but there are reports that Rahama might get invaded by Isao’s forces due to the existence of dimensional holes. Well, looks like the Kotobuki Squadron will return to that town. 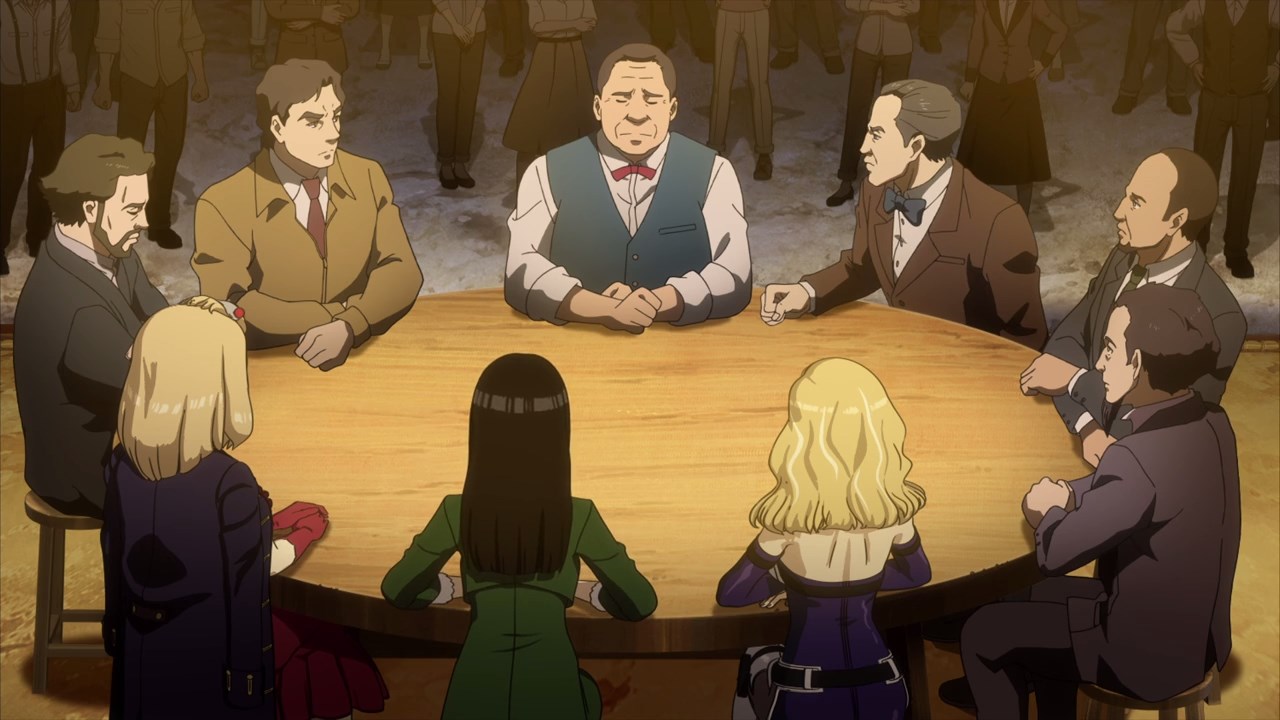 And really, the mayor and his staff are panicking right now on whether to join the Brotherhood or getting their town set ablaze. After all, Rahama was once attacked by the Elite Industries so that town has a fair share of bad luck. 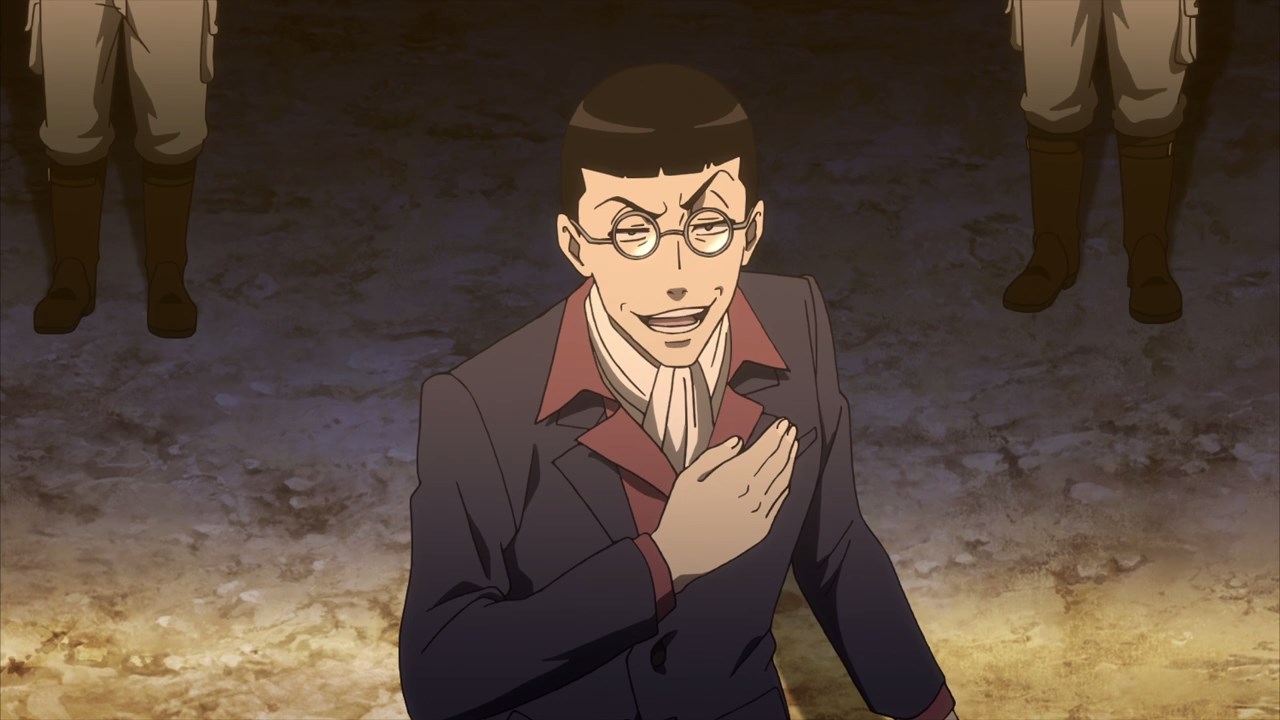 And speaking of the Elite Industries, a former employee named Hideaki is here to deliver an ultimatum: Surrender Rahama to the Brotherhood or the town will be destroyed.

Well, seems that the former HR Chief has joined Isao’s circle of friends, but I still believe that Hideaki will get the Yufang technology for himself. 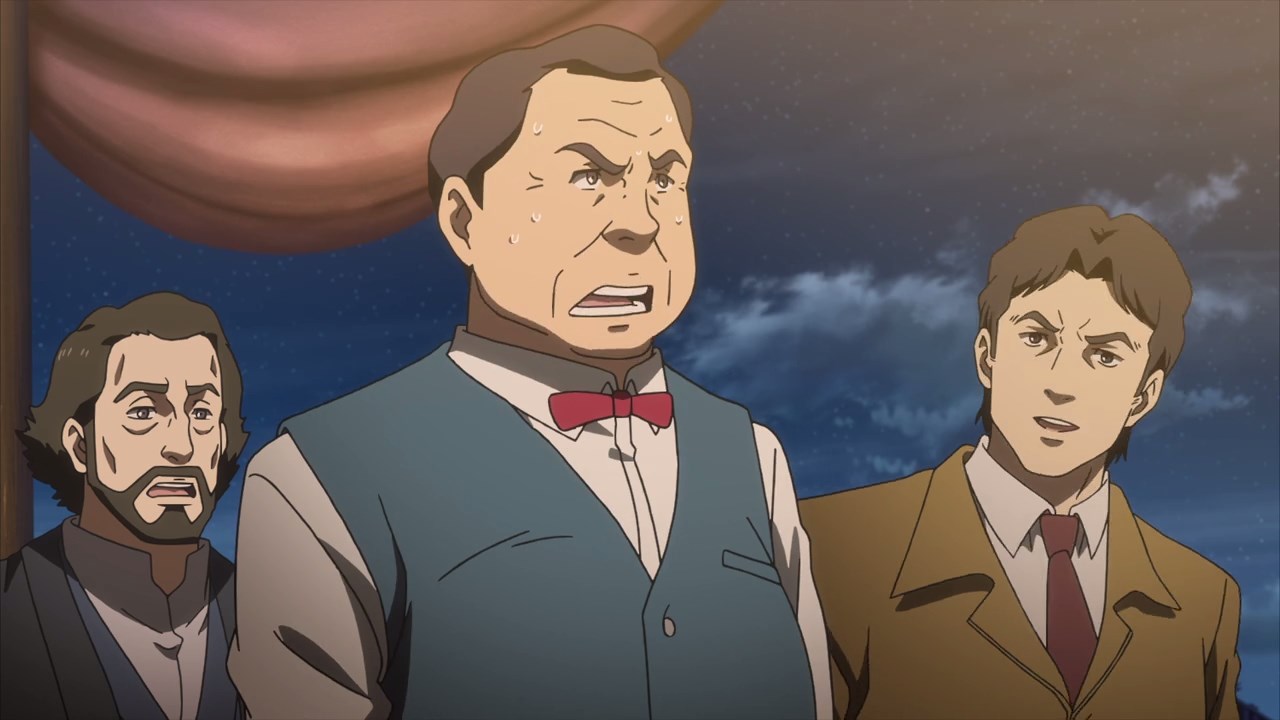 In any case, the Mayor of Rahama told Hideaki that his town will not surrender to the Brotherhood. Then again, his air force couldn’t match up against the might of Ikesuka’s air force, so it’s up to the Kotobuki Squadron to defend the town. 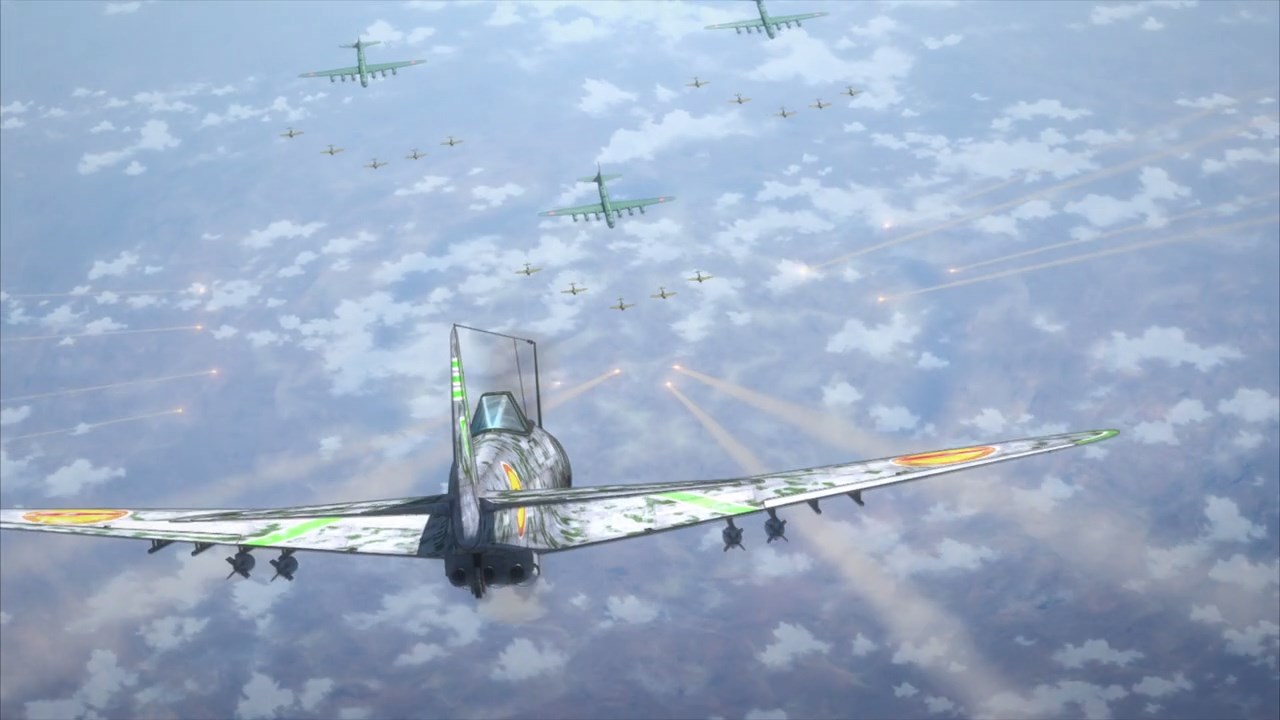 Of course, Reona and the rest must fly up closer to the stratosphere in order to bring down 3 bombers and their escort planes.

Unfortunately, their guns are ineffective and their Hayabusa planes can’t fly fast enough, so Natsuo strapped their planes with rocket boosters and a salvo of anti-aircraft rockets to bring those bombers down. 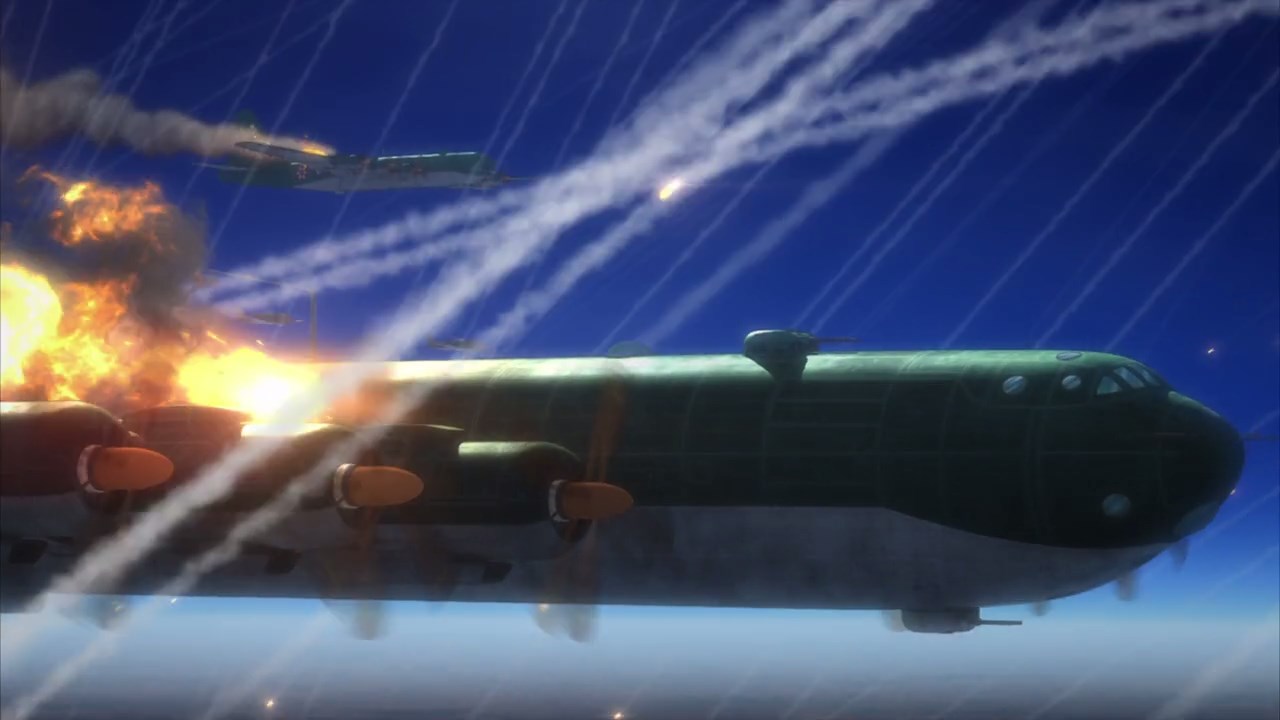 While those rockets are capable of taking a small squadron of planes, these bombers are well-armored that they cannot be taken down easily… unless the Kotobuki Squadron shoot down the engines or the hatch where the bombs are located. 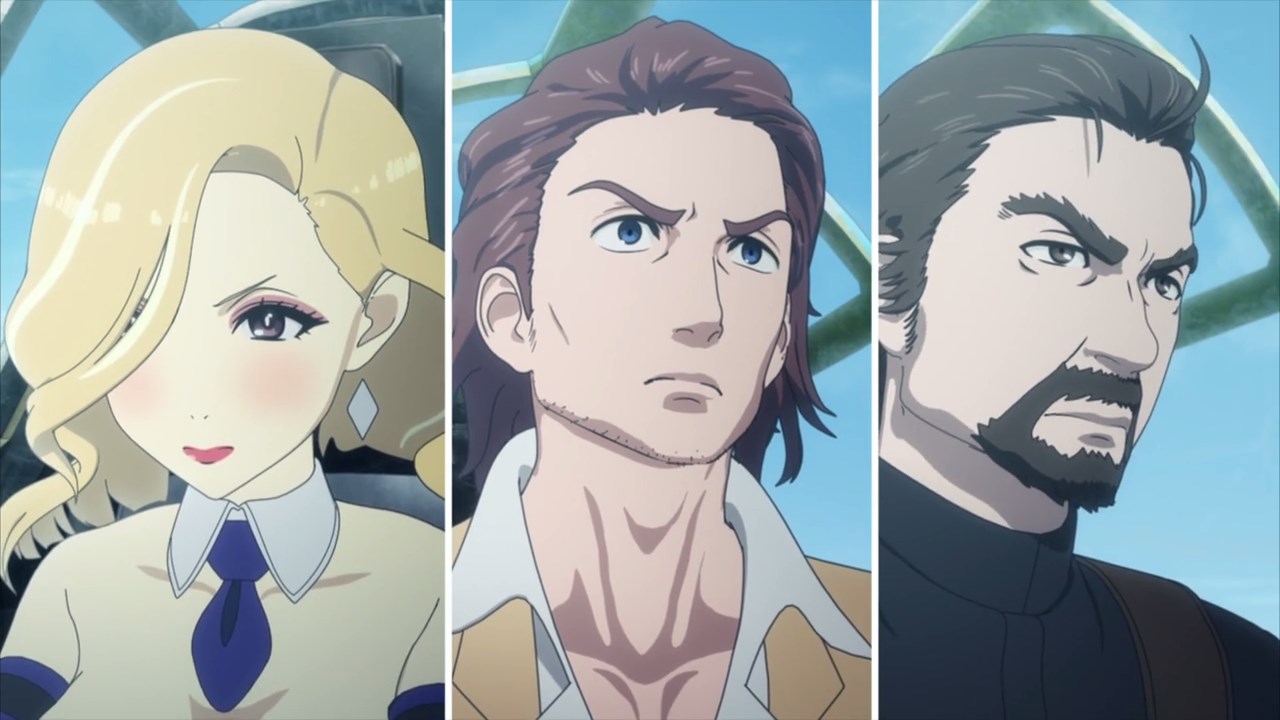 Meeanwhile, Camilla and those two guys from the Nazarene Squadron are at the atmosphere as they’re patrolling the Rahama skies against the Ikesuka Air Force. 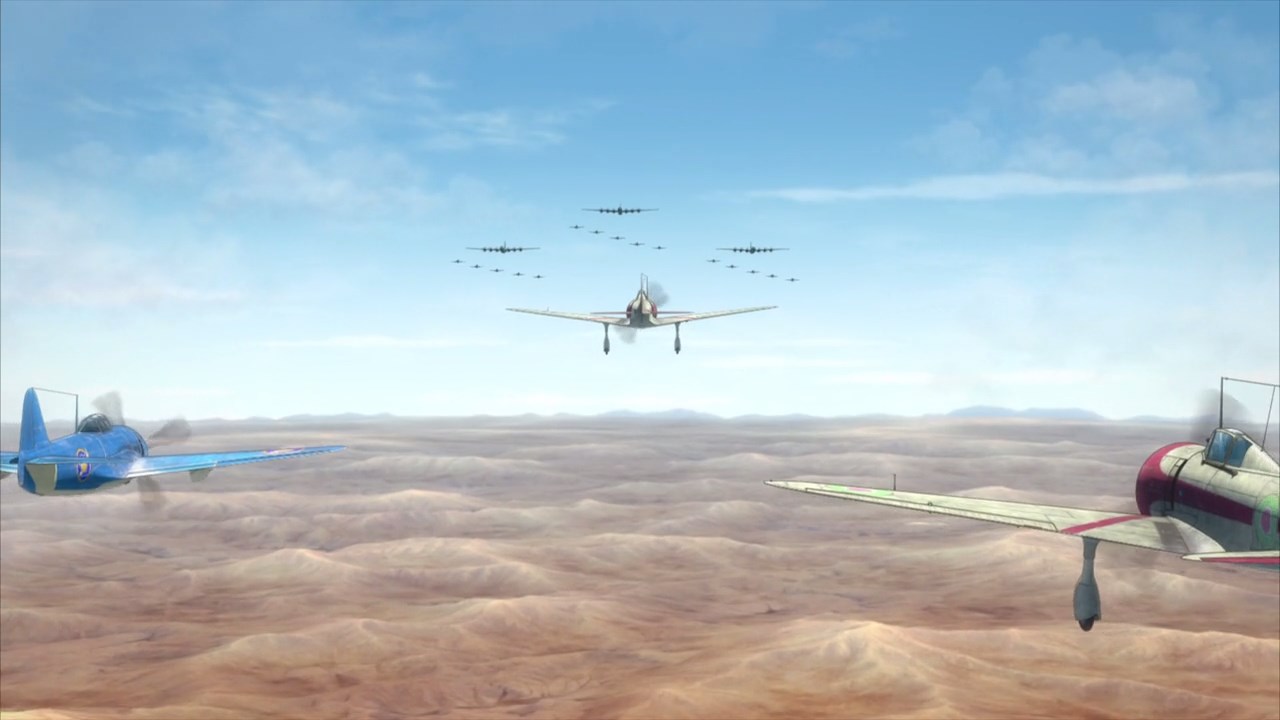 Unfortunately, the trio will have a rude awakening as the Ikesuka Air Force have arrived to bomb Rahama until there’s nothing left.

The only thing left to do is to take those escort planes down, while the Kotobuki Squadron will focus on destroying the bombers before it reached the town. 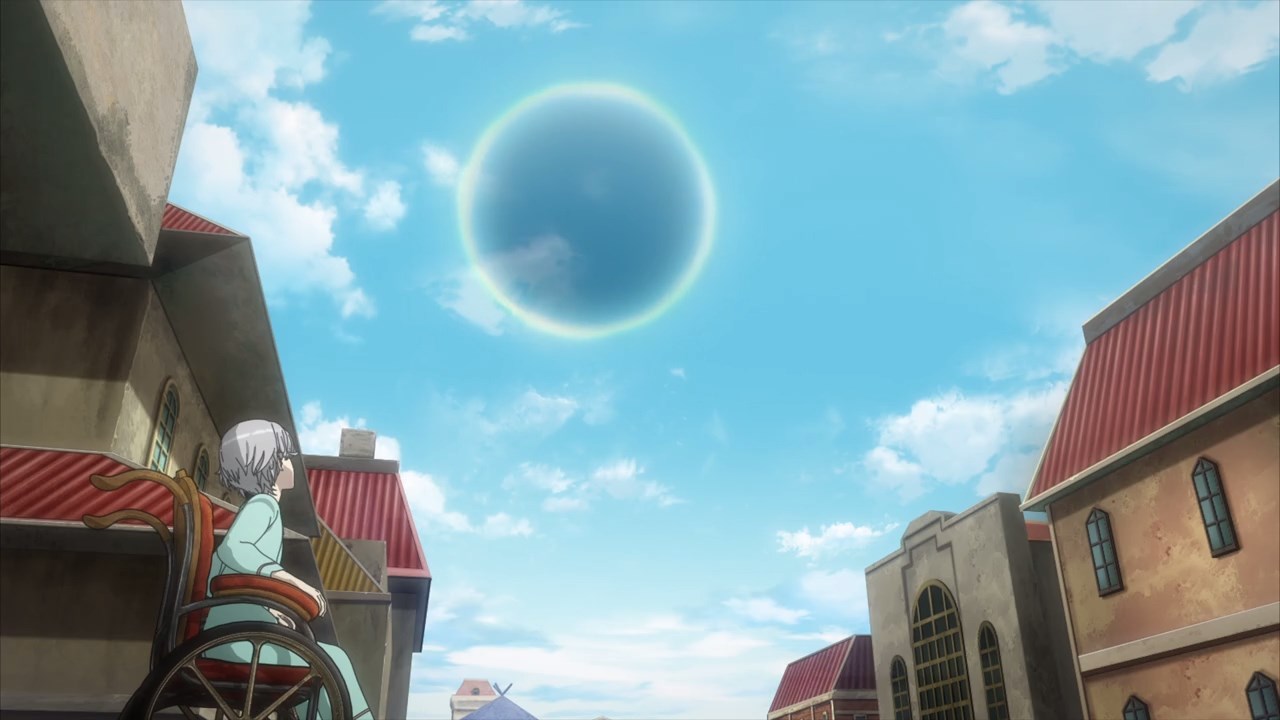 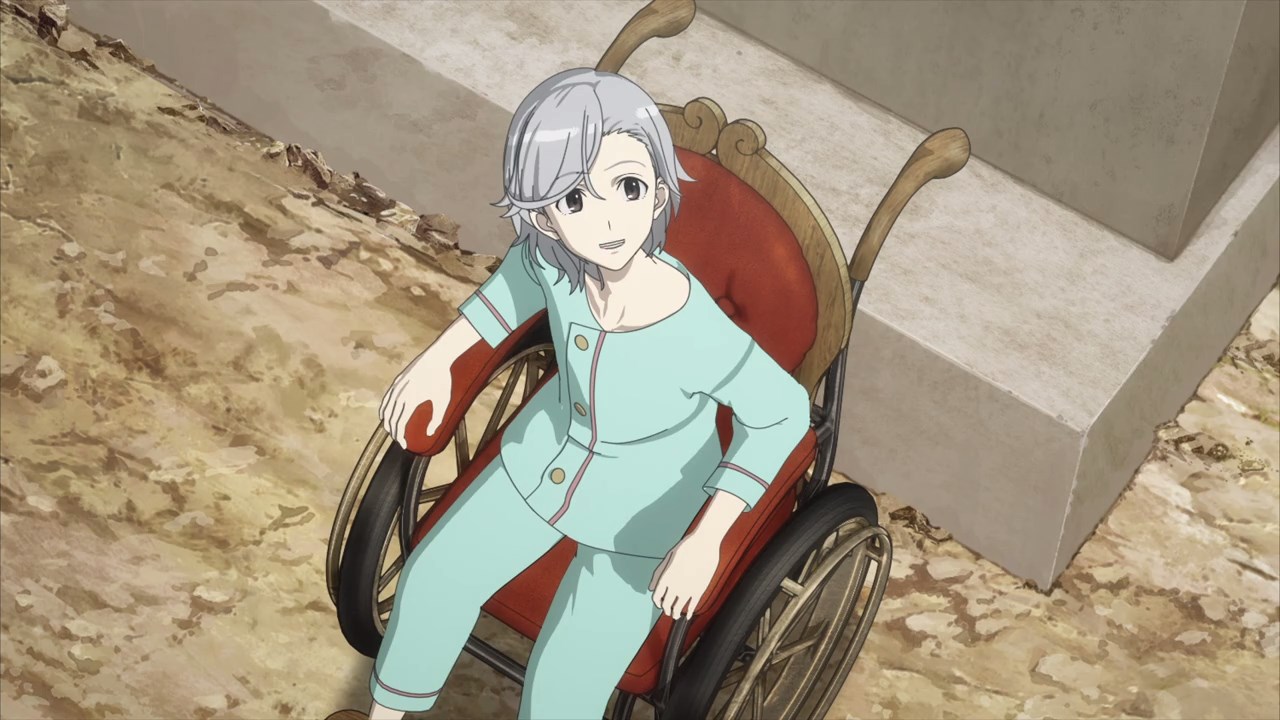 Speaking of Rahama, looks like Allen is just chilling down there as he’s watching the hole as it opened. I wonder if that hole will lead towards the lost country of Yufang? 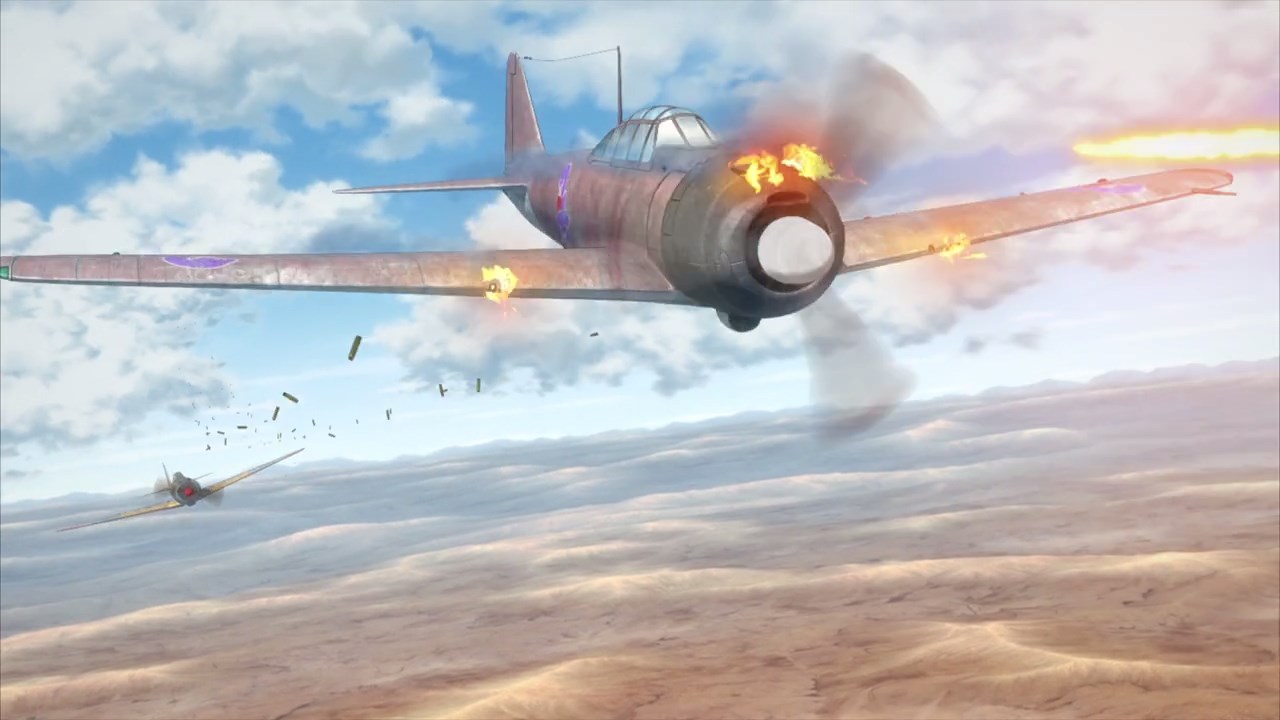 Now then, while the Kotobuki Squadron will focus on taking down the bombers, there are a few pilots who wanted to bring down the bomber by himself/herself. For Kirie, it’s annoying to have her prey get stolen away. 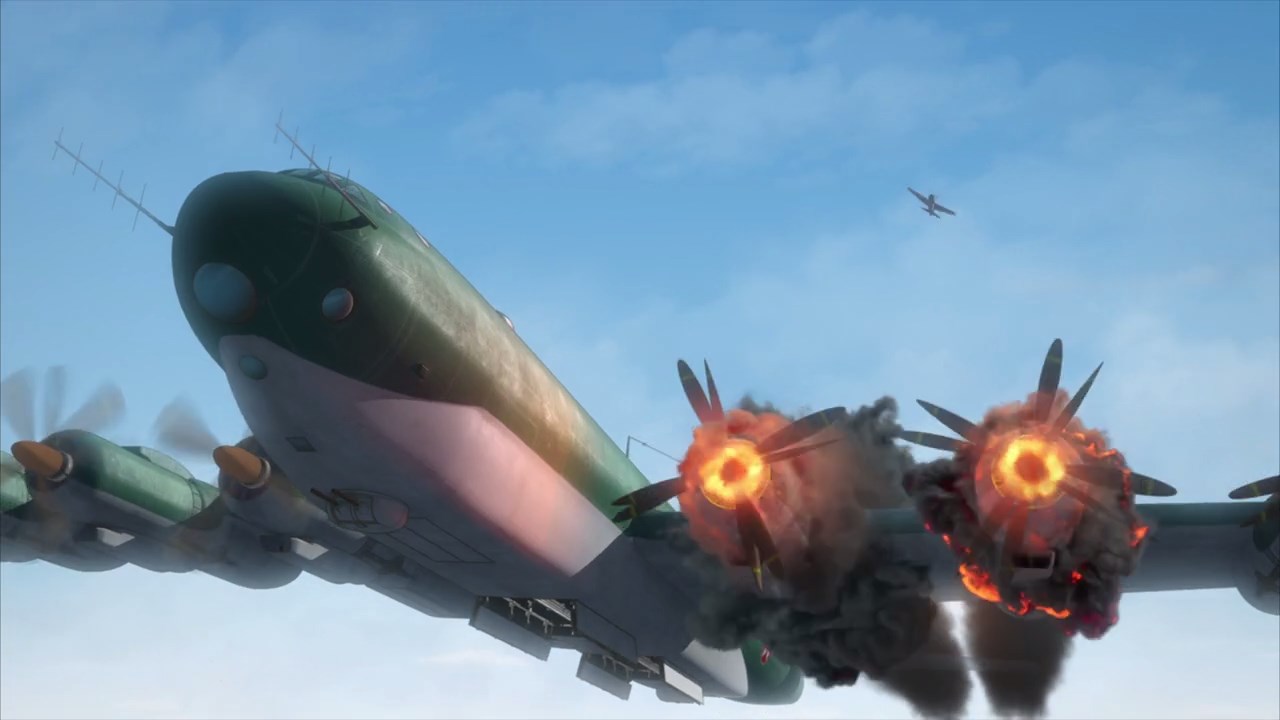 But as you can see here, Kirie is angry that the mysterious pilot has arrived to bring one bomber down by taking out its engines. 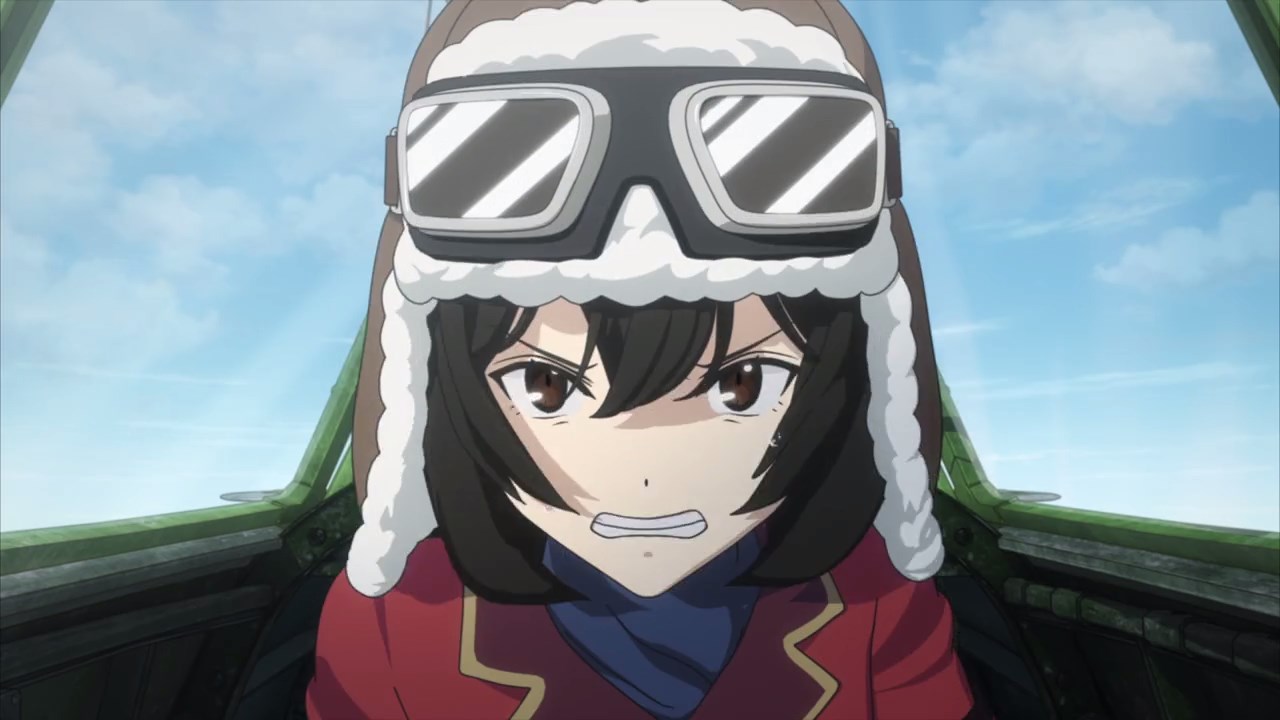 Sorry Kirie, I guess your rival just shot down one bomber while you’re struggling to take it down with nothing but machine gun fire. Also, I think you should pay attention to Rahama right now. 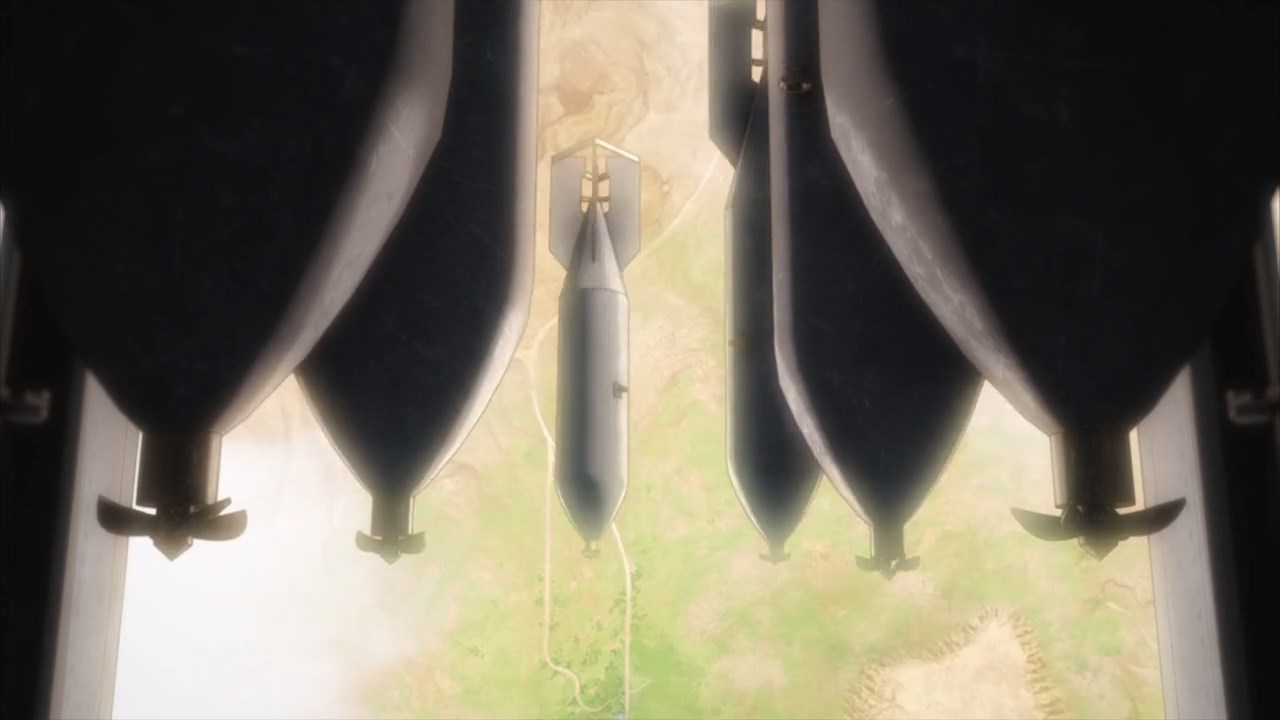 Turns out, one bomber has managed to arrived at Rahama and they’re about to unload its bombs towards the town. Basically, it’s game over! 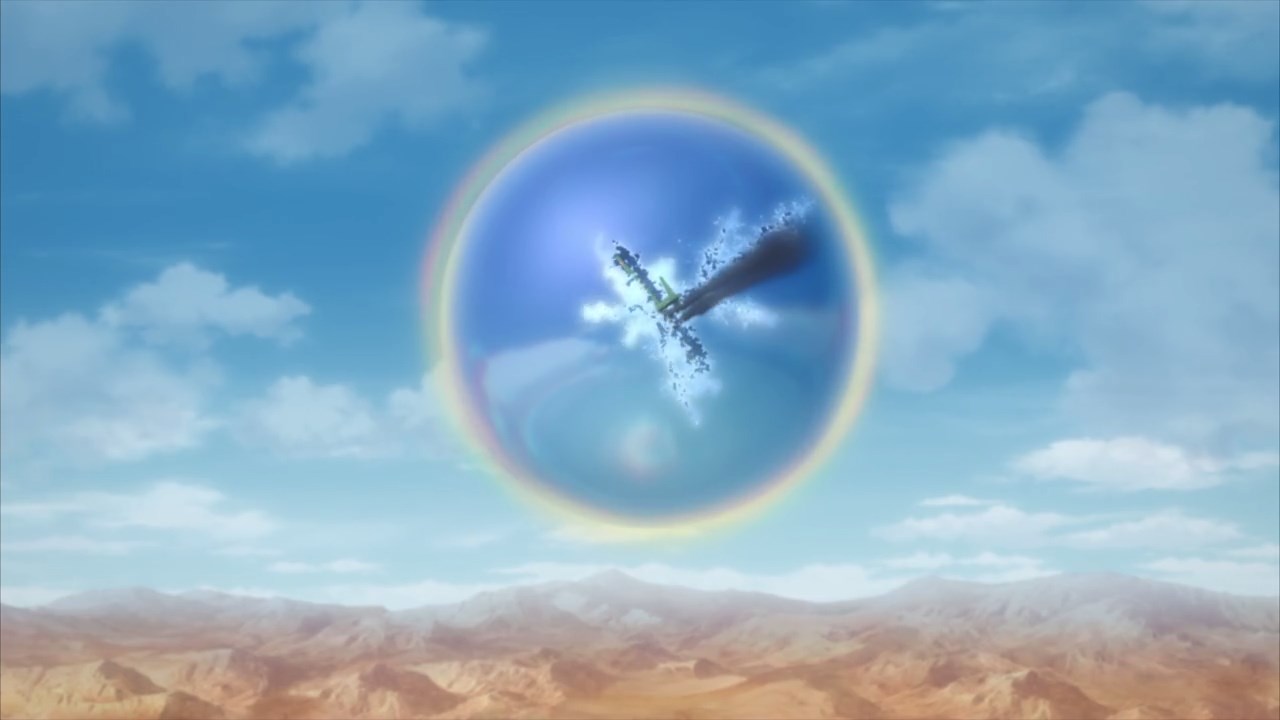 But strangely enough, it appears that one bomber has crossed the dimensional hole. However, instead of getting into the lost country of Yufang… 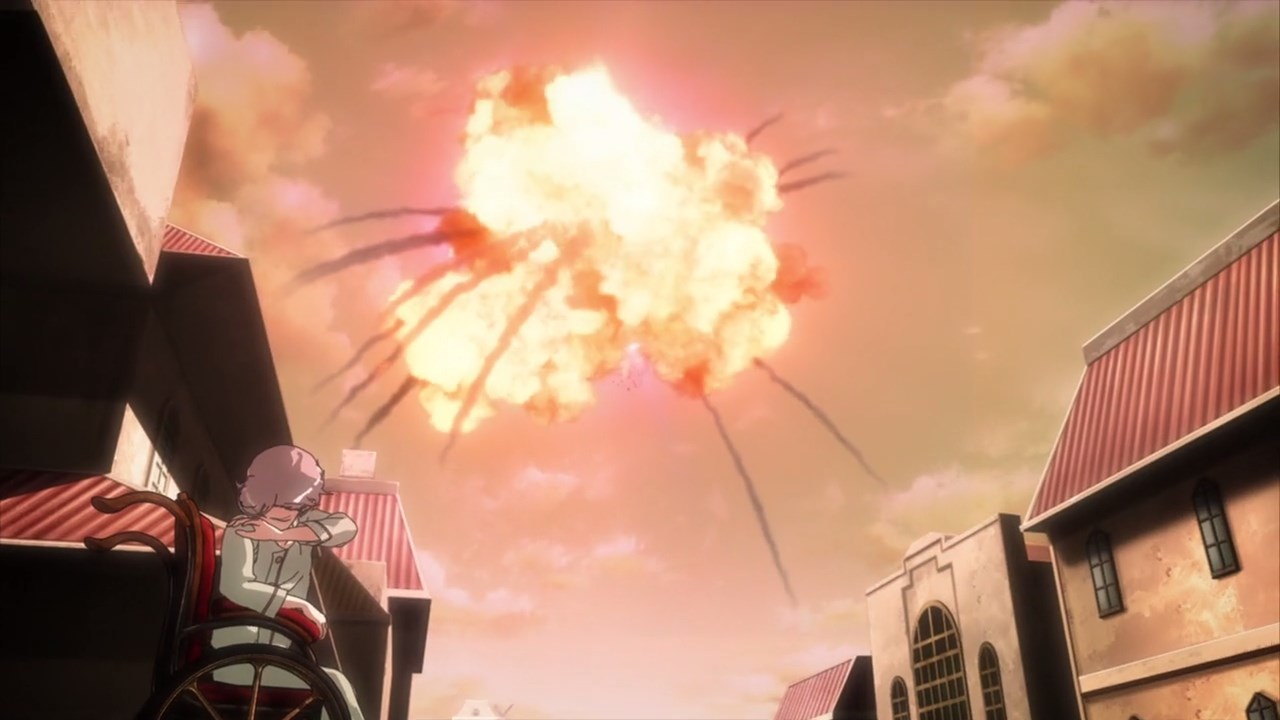 The bomber just explodes into a ball of fire. Even Allen couldn’t believe that one of Ikesuka’s bombers failed to get inside the hole. 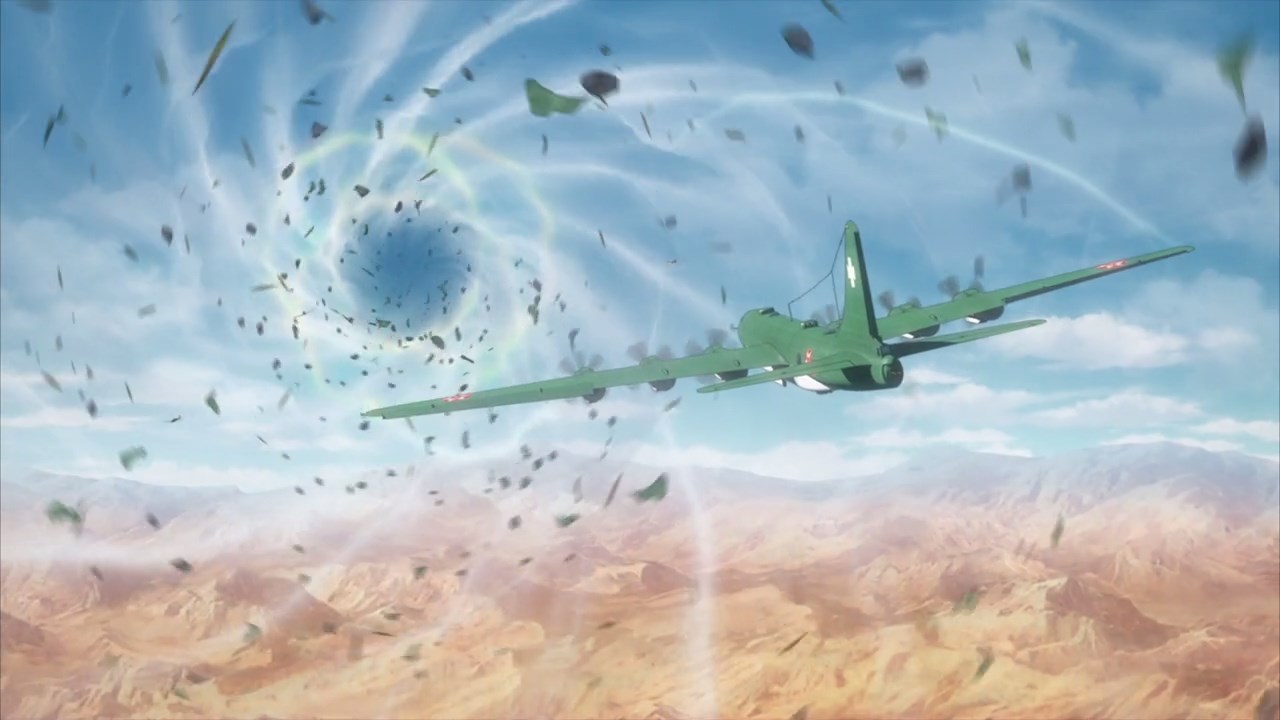 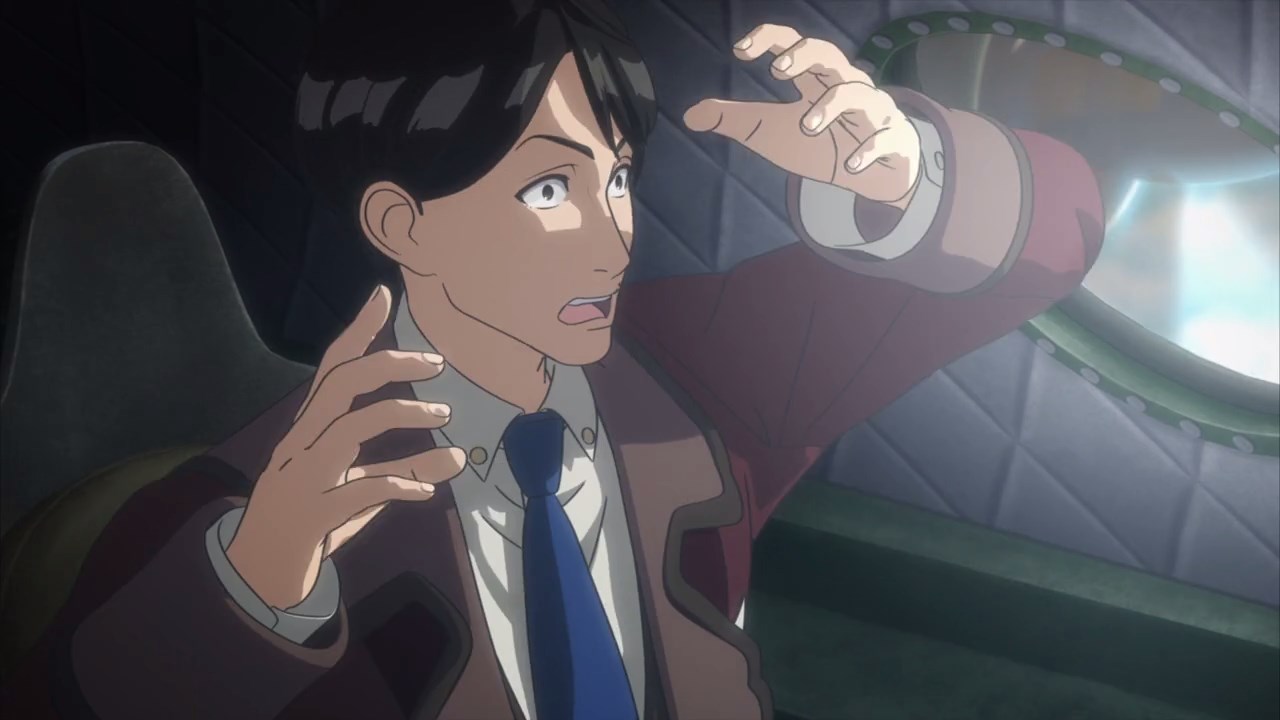 Even worse is that the explosion has turned the portal into a black hole, sucking everything into nothingness that Isao was caught off-guard by it.

Then again, it’s sucks that he didn’t go inside the hole once it’s opened. 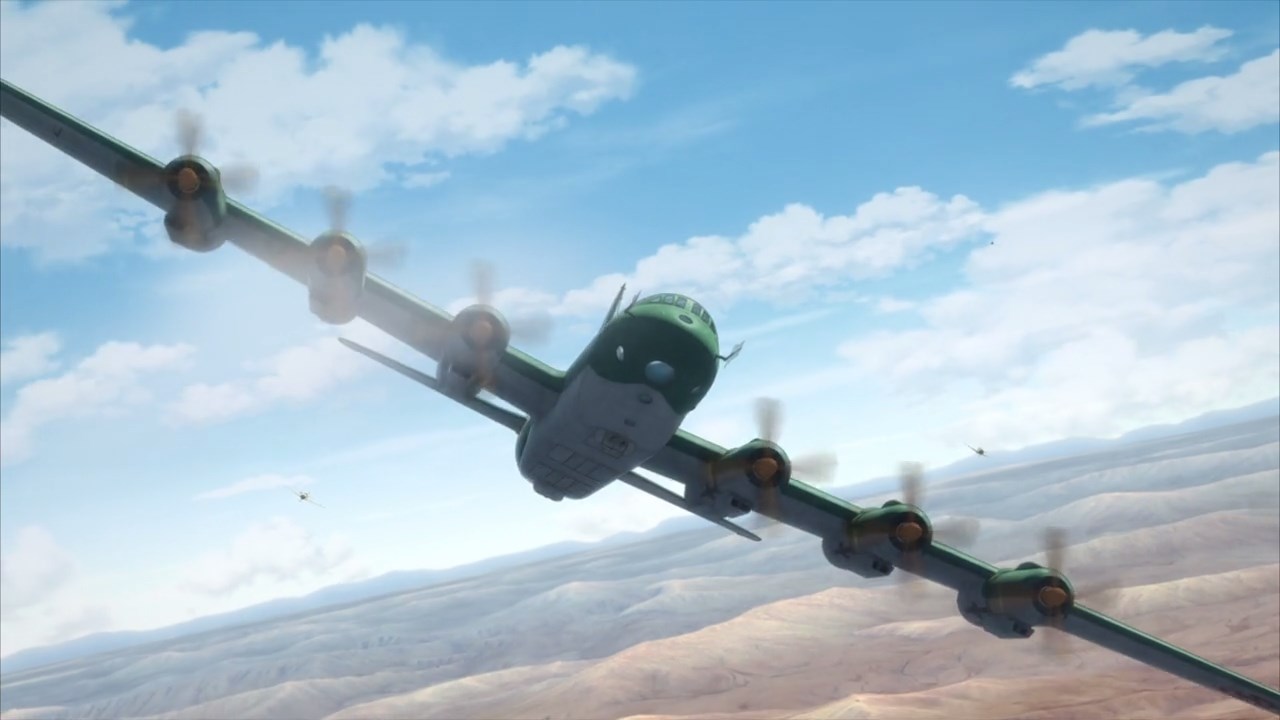 For now, the Ikesuka Air Force made their retreat as they lost one dimensional hole. The Kotobuki Squadron will meet Isao and his men in the future now that he’s the enemy of the entire world. 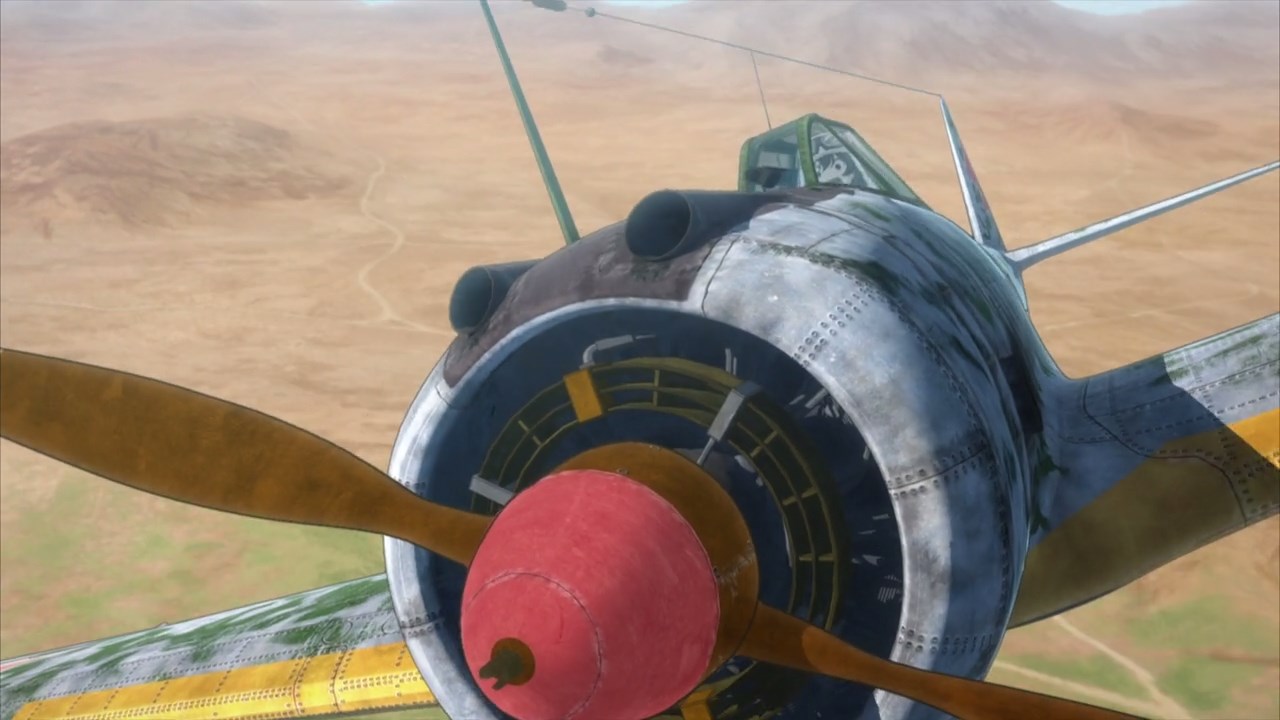 But for the time being, it’s time to resupply until the next mission. But not for Kirie as she wants to take down the plane with the snake emblem, but the fuel of her plane is already empty as Kirie will have to crashland towards Rahama. 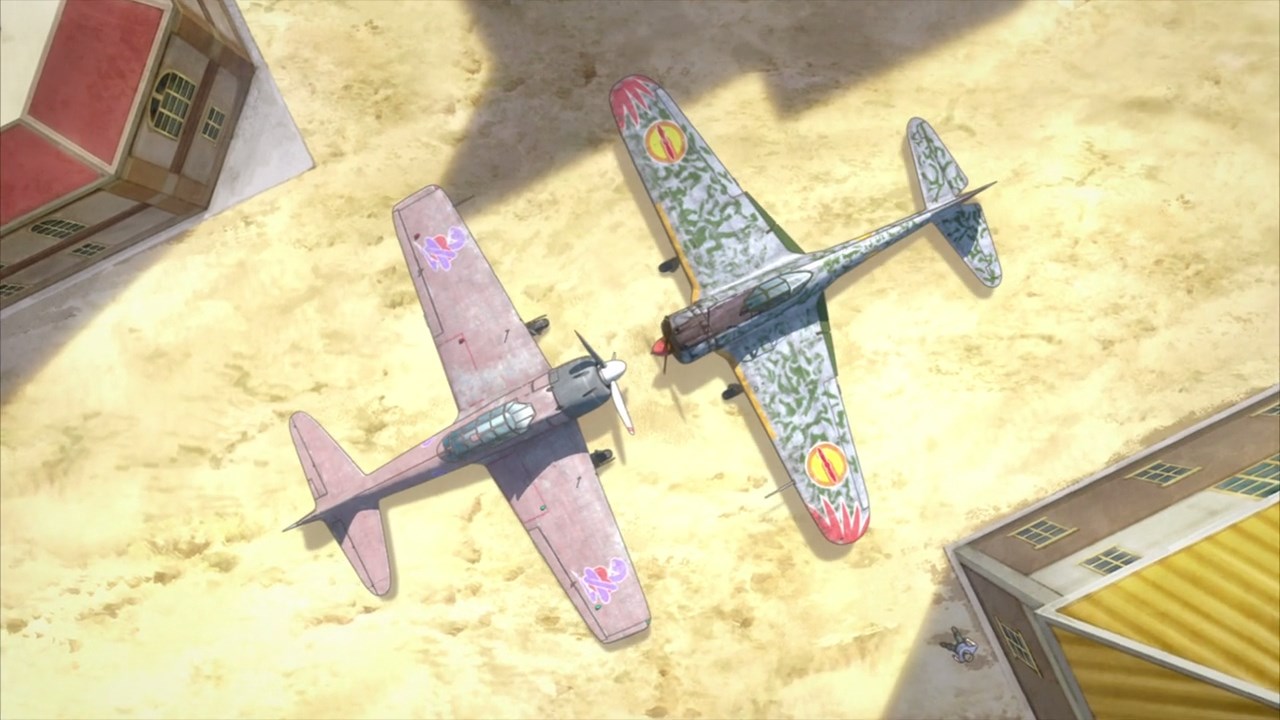 And not just Kirie, so is the mysterious pilot as he/she was forced to land, almost hitting the Hayabusa plane. But anyways, it’s time to find out who this mysterious pilot that annoys the hell out of Kirie? 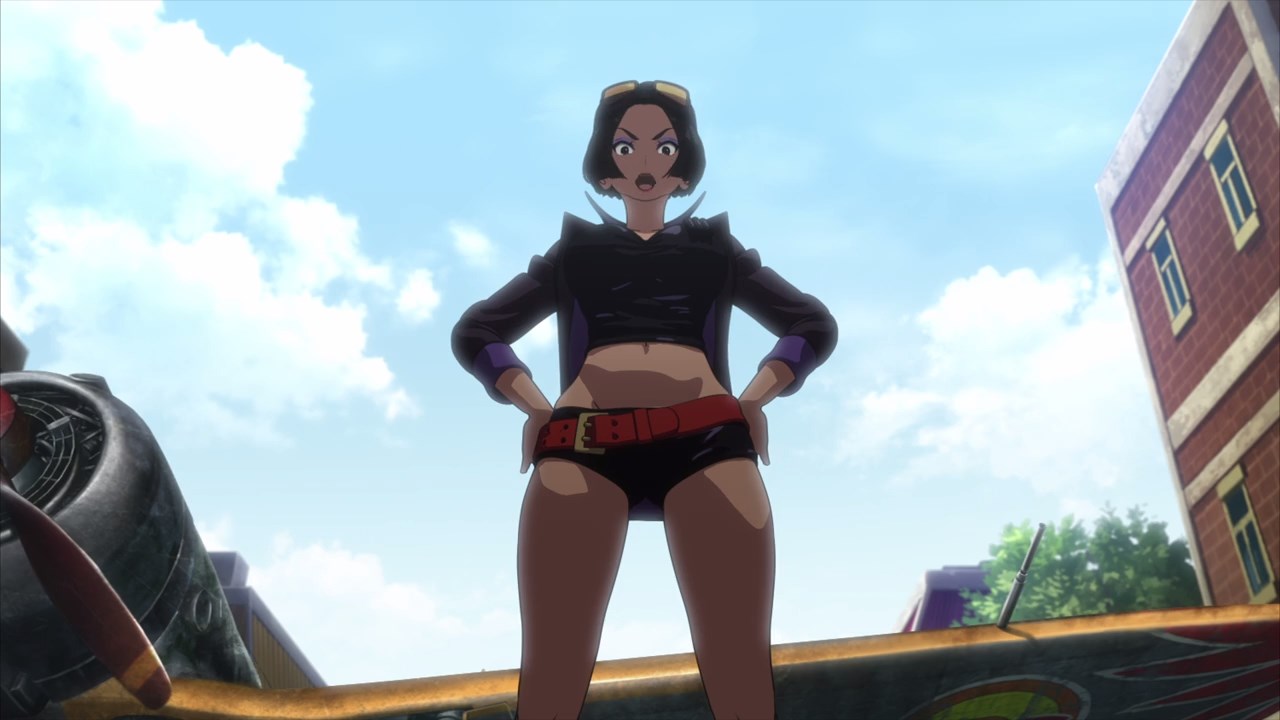 Turns out, that mysterious pilot is actually a woman named Naomi who learned how to fly an airplane thanks to Ol’ Sabu. Wait, don’t tell me that Ol’ Sabu has another student? 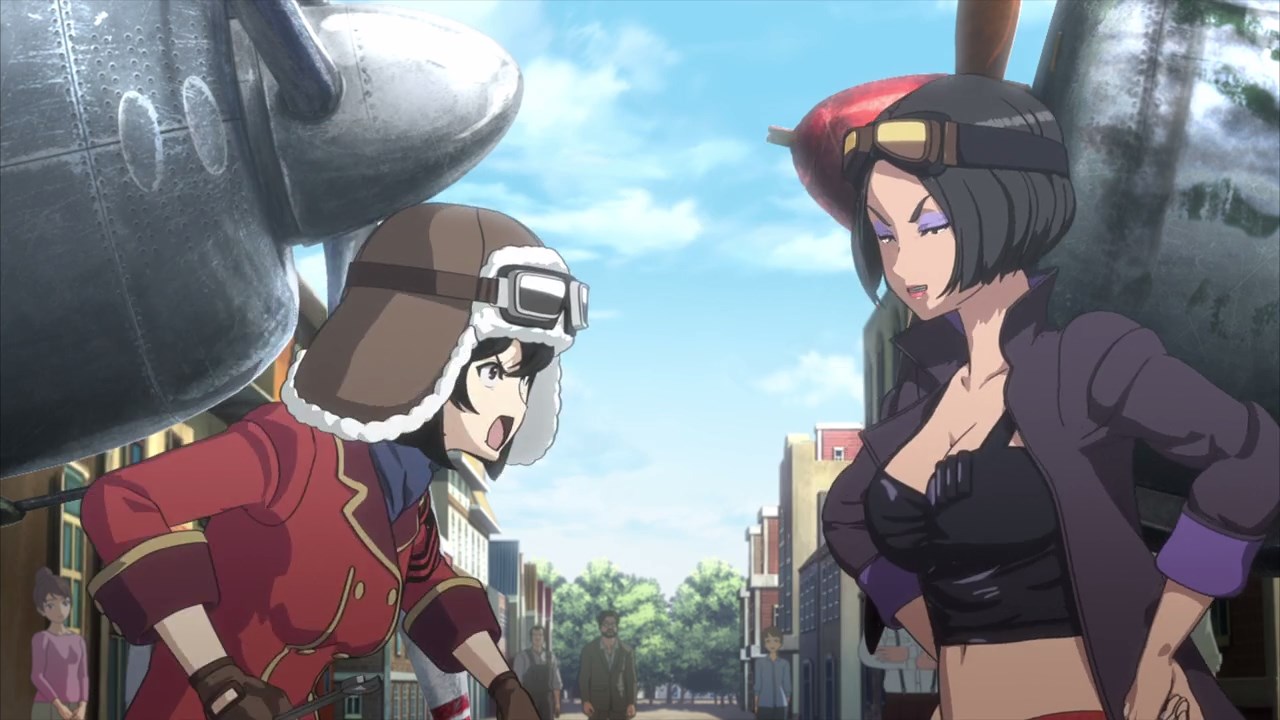 Still, Naomi mocks Kirie for her inability to shoot her plane down, which a fiery argument ensued between these two pilots. Seems that Kirie won’t calm down until she finally got her payback against Naomi, huh?

Anyways, looks like we finally found the true villain of this anime as Isao is the megalomaniac who wants to get his hands on Yufang technology. Then again, he might be usurped by the likes of his butler or even Hideaki as they wants all of Yufang technology by themselves. But wait, what about the Standon Oil Company’s role for this conflict? Well, I speculate that the oil company is also controlled by Isao, which means that he’ll will control everything ranging from lost technology to commodities like fuel.

With that said, looks like this series is reaching its conclusion. How will the Kotobuki Squadron stop Isao and his ambition to control the entire continent of Ijitsu? We’ll find that out next time!