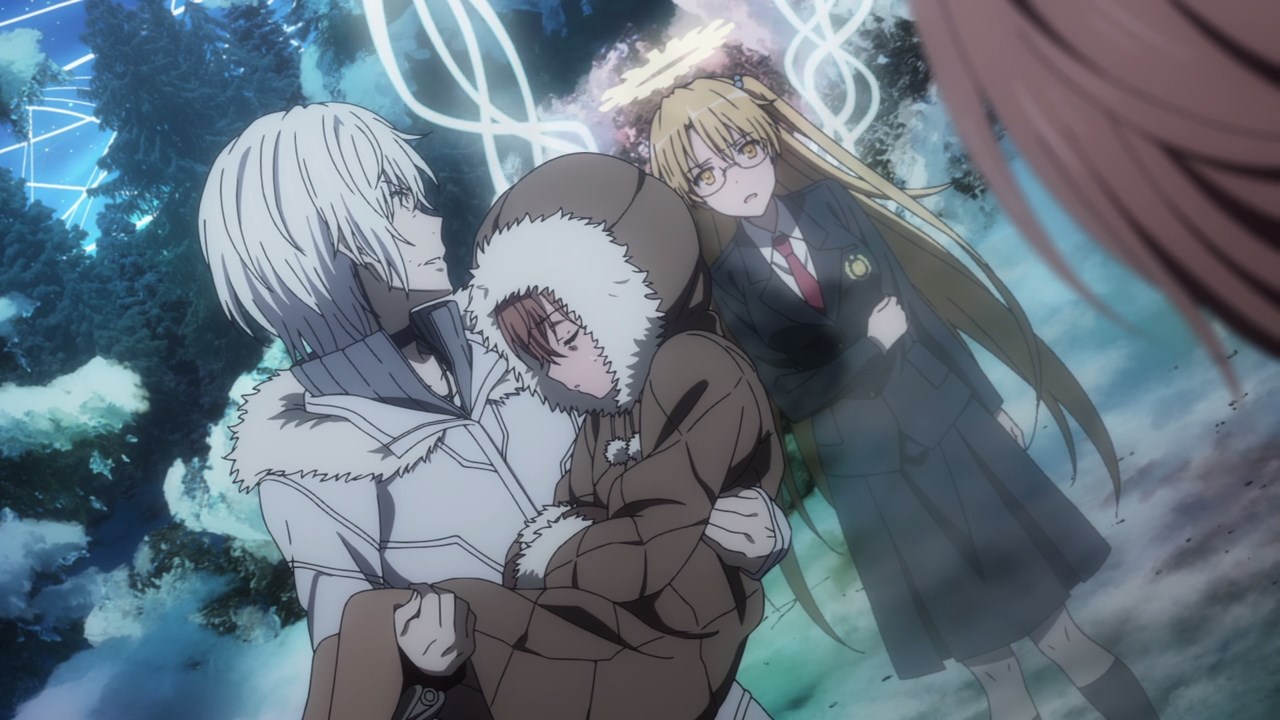 Well look what we have here, it’s Hyouka Kazakiri as she wants to tell Accelerator that there’s a way to save Last Order. And that’s by singing a lullaby as Index managed to cure Last Order’s poison through her song, but not completely because Index is currently out of control at the moment since Fiamma of the Right stole her grimoires.

But you know what, Accelerator will decipher Index’s song so that Last Order will be saved. As for Hyouka, she’s going back to Academy City as she can’t maintain her form for longer. On the other hand, what happened to Misaka Worst? 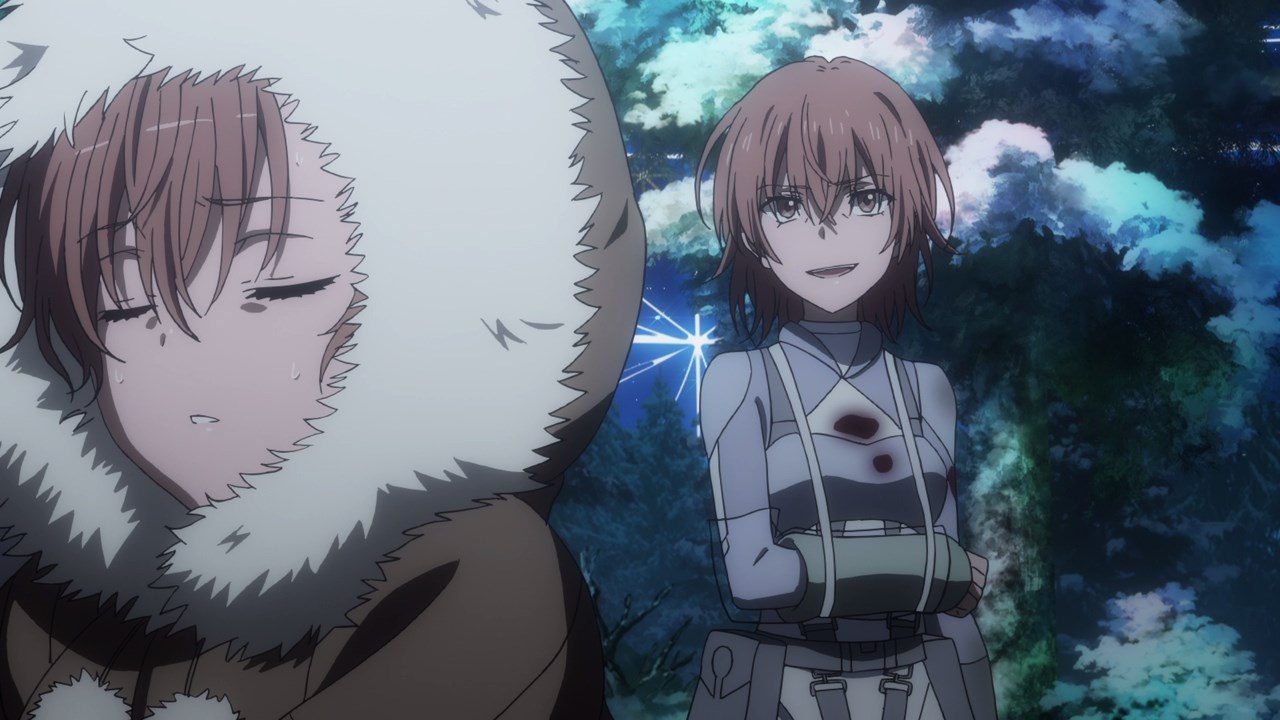 Well, Misaka Worst survived the car crash. In any case, Accelerator will be very busy on deciphering Index’s song for a while, and he doesn’t have time to waste because Last Order might die at any minute. 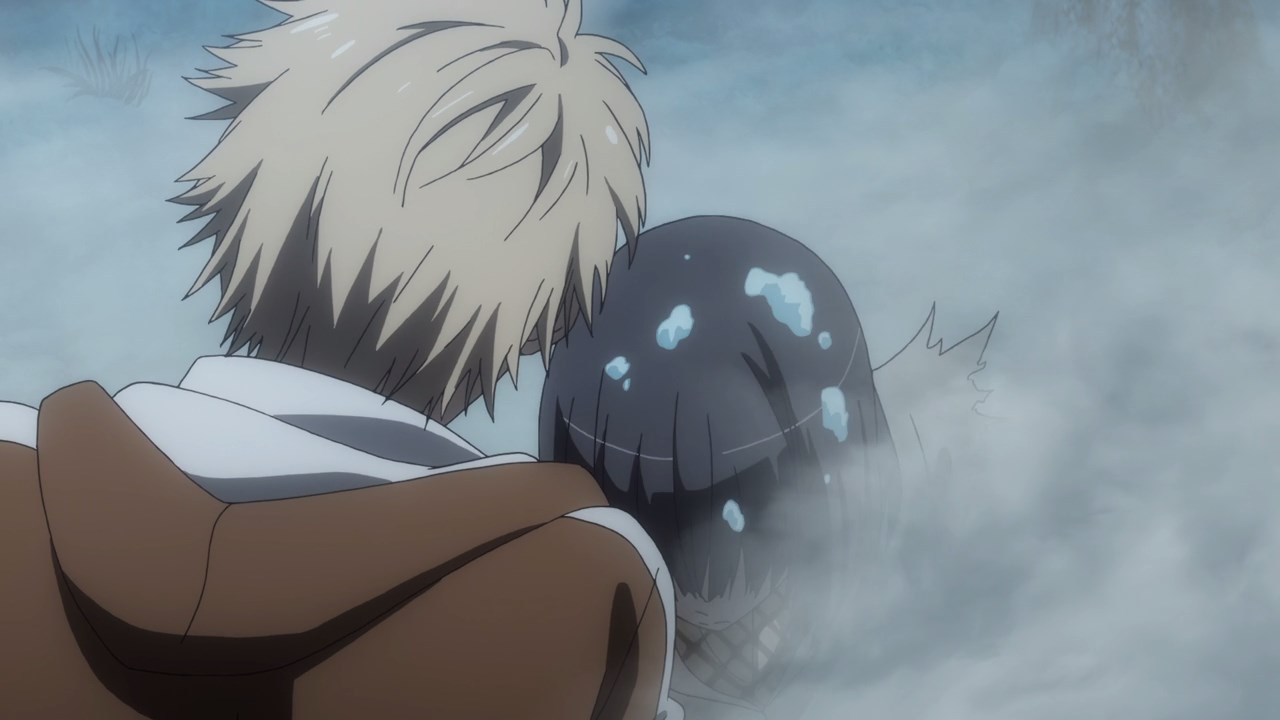 Fortunately, Shiage managed to find Rikou and- Wait, she didn’t wear that!? Don’t tell me that she’s here to finish her business? 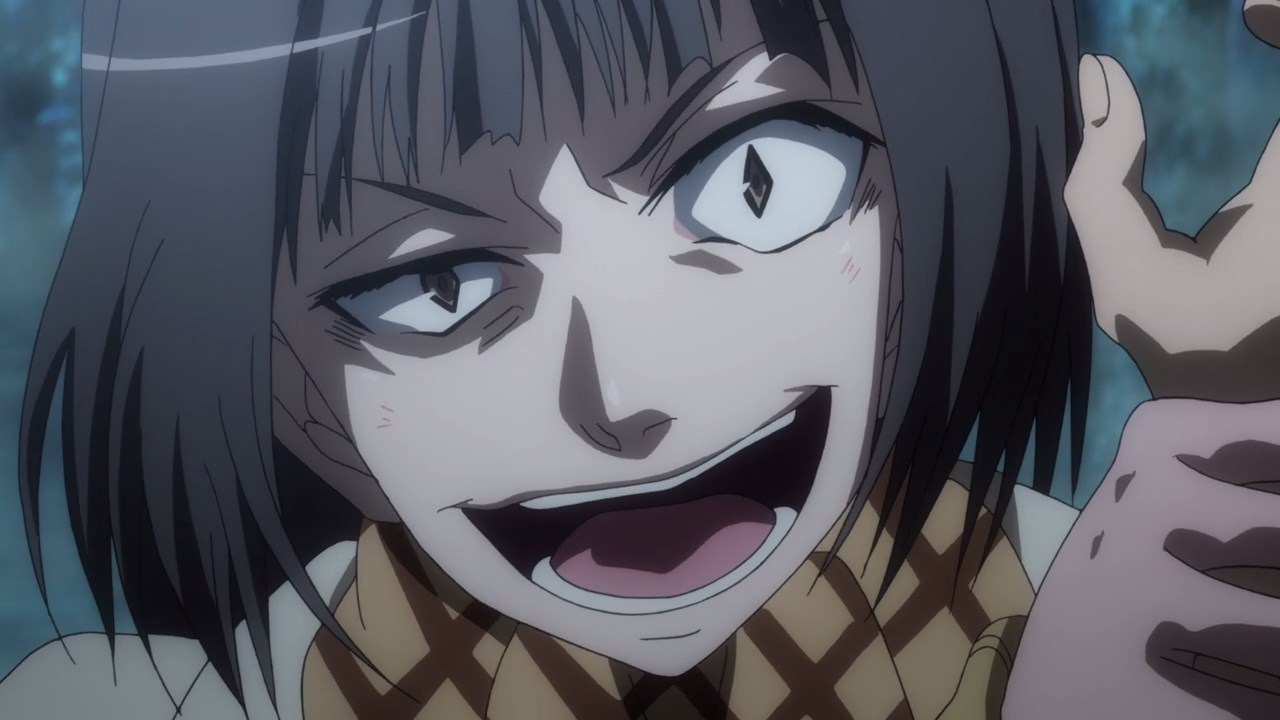 Now wait a minute, what happened to the real Rikou Takitsubo? 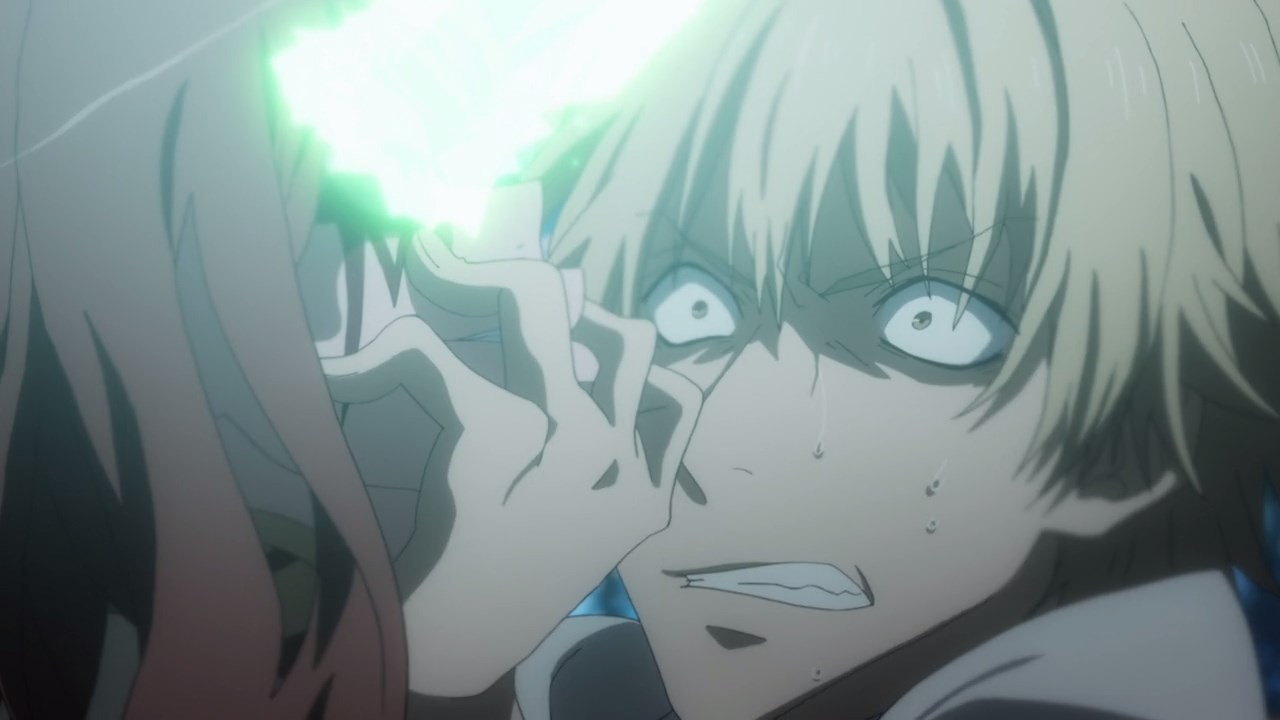 C’mon, he sprayed her right eye with ability crystals and now Shizuri is firing her lasers, including her right eye which was replaced with a mechanical one. 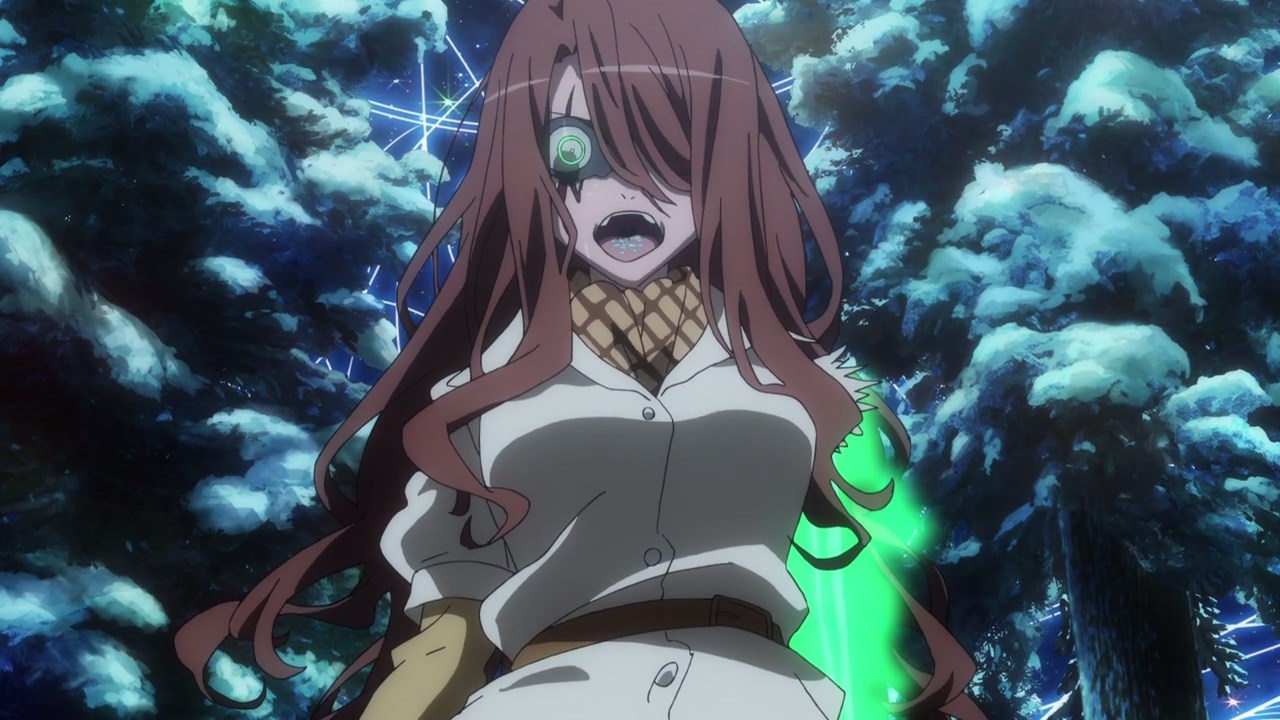 Speaking of ability crystals, Shizuri is currently chomping them because while it’ll make her stronger, its side-effect is quite damning as those crystals will make Mugino mentally-unstable. 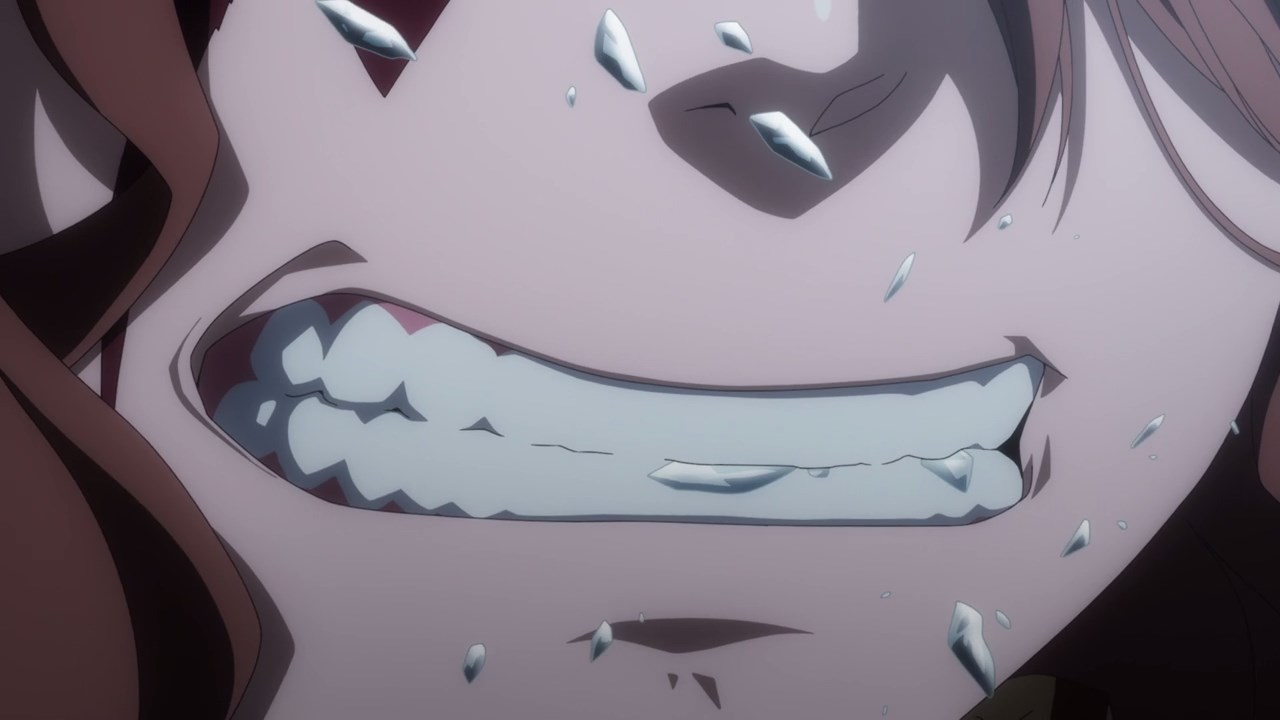 But hey, Mugino doesn’t care if she went insane as long as she kills both Hamazura and Takitsubo. Man, looks like Shiage is doomed! 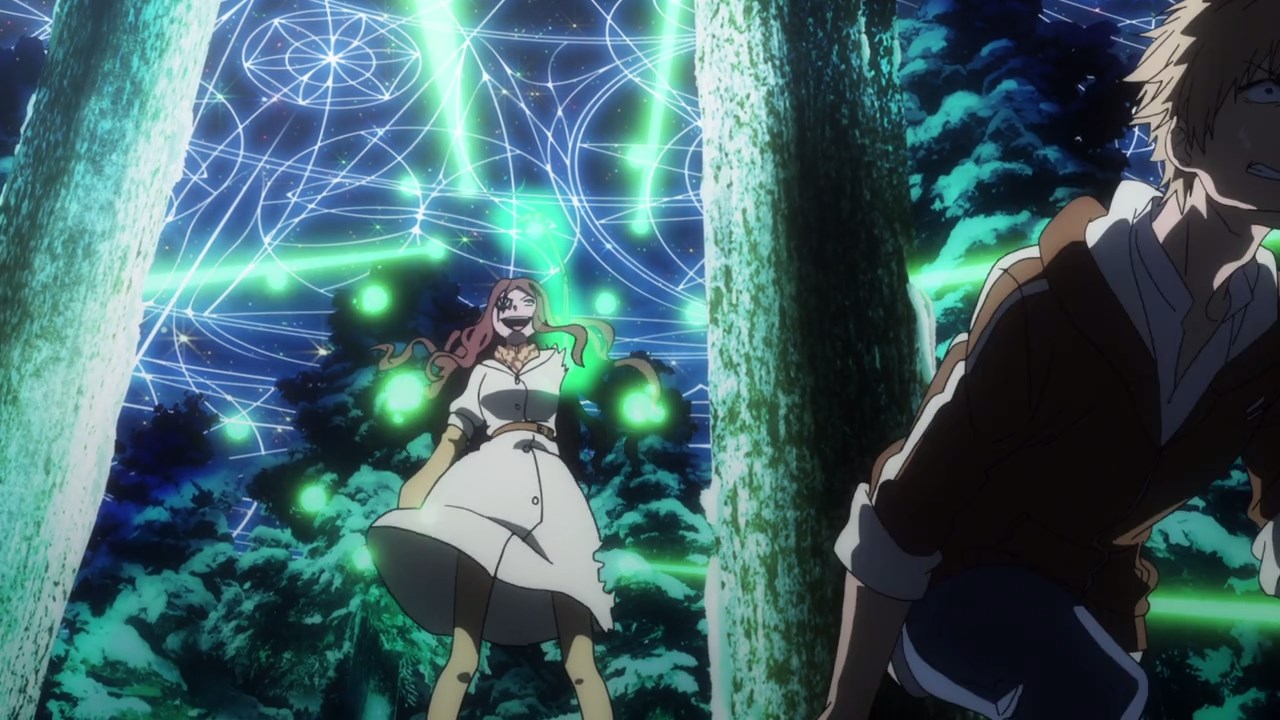 However, he’s not gonna get killed by a deranged Level 5 esper. All he needs to do is to hold it out until Shizuri expends all of her energy. 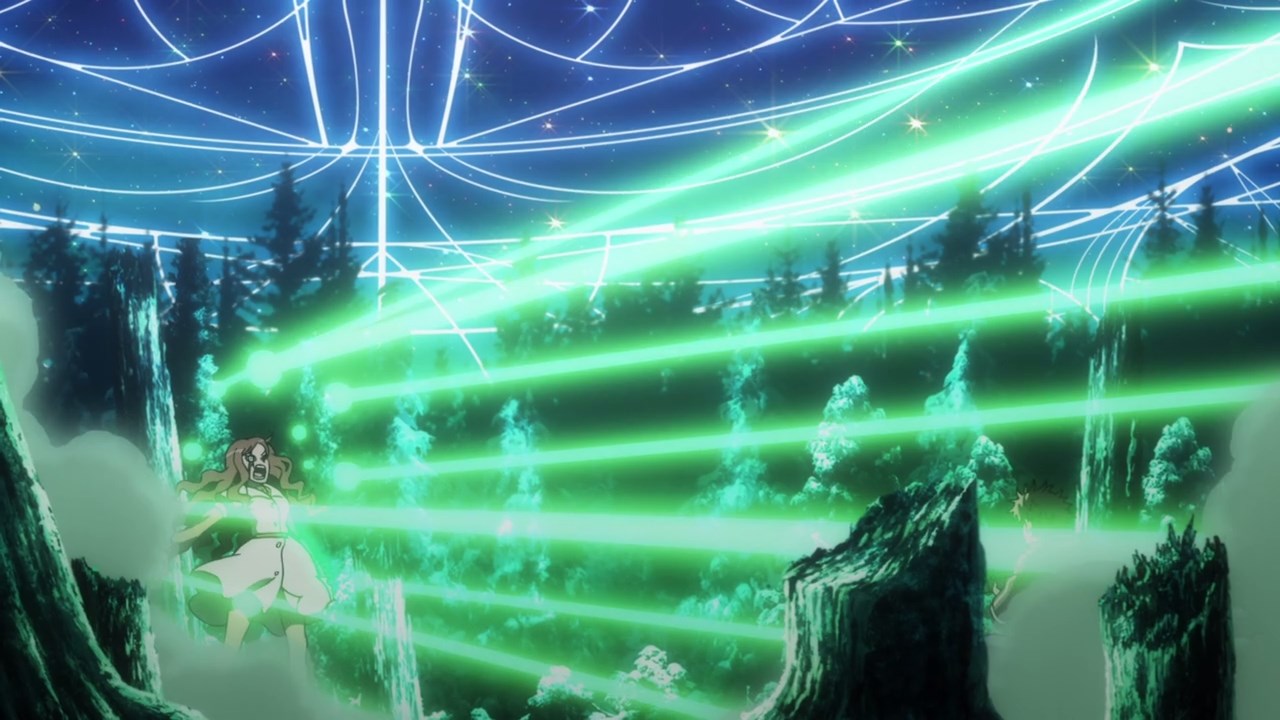 Then again, Shiage is worried that Shizuri might die if she used her Meltdowner to its extremes. After all, she’s using ability crystals like there’s no tomorrow. 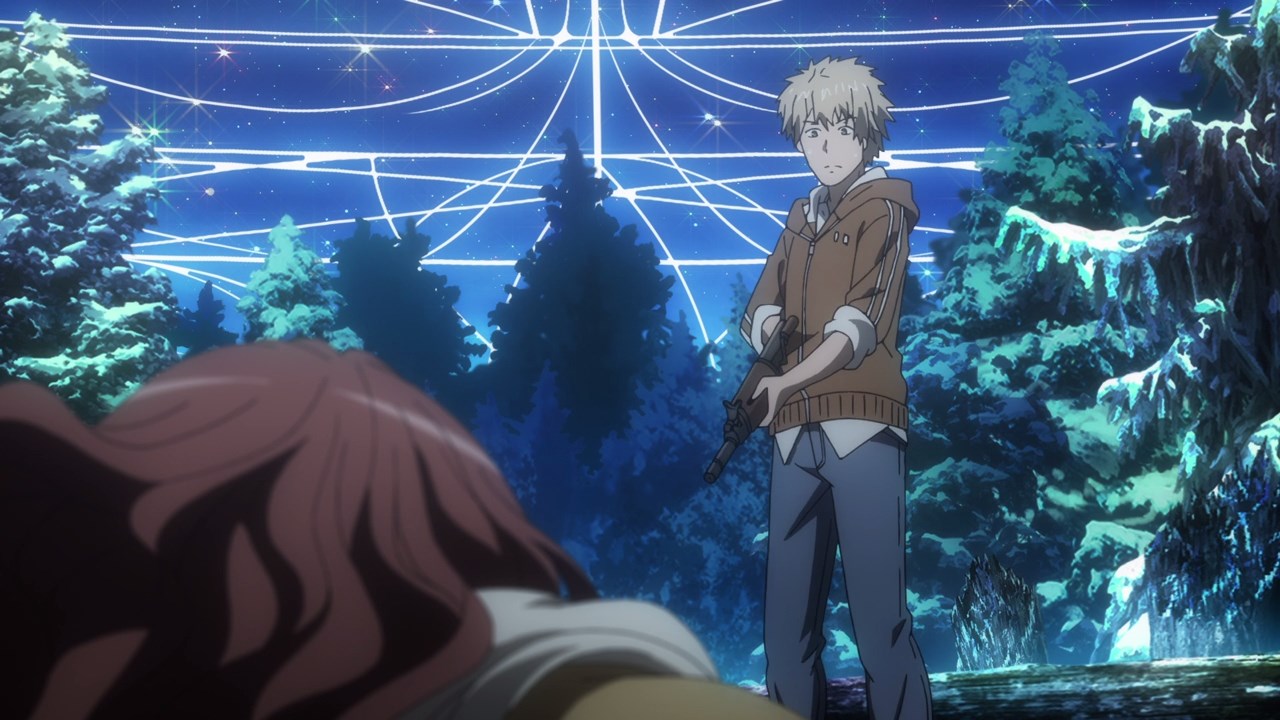 But afterwards, Mugino passed out as she used all of her energy to hit everything, but not Hamazura as he survived a barrage of Meltdowner lasers. However, he’s not gonna shoot Shizuri Mugino with a rifle. 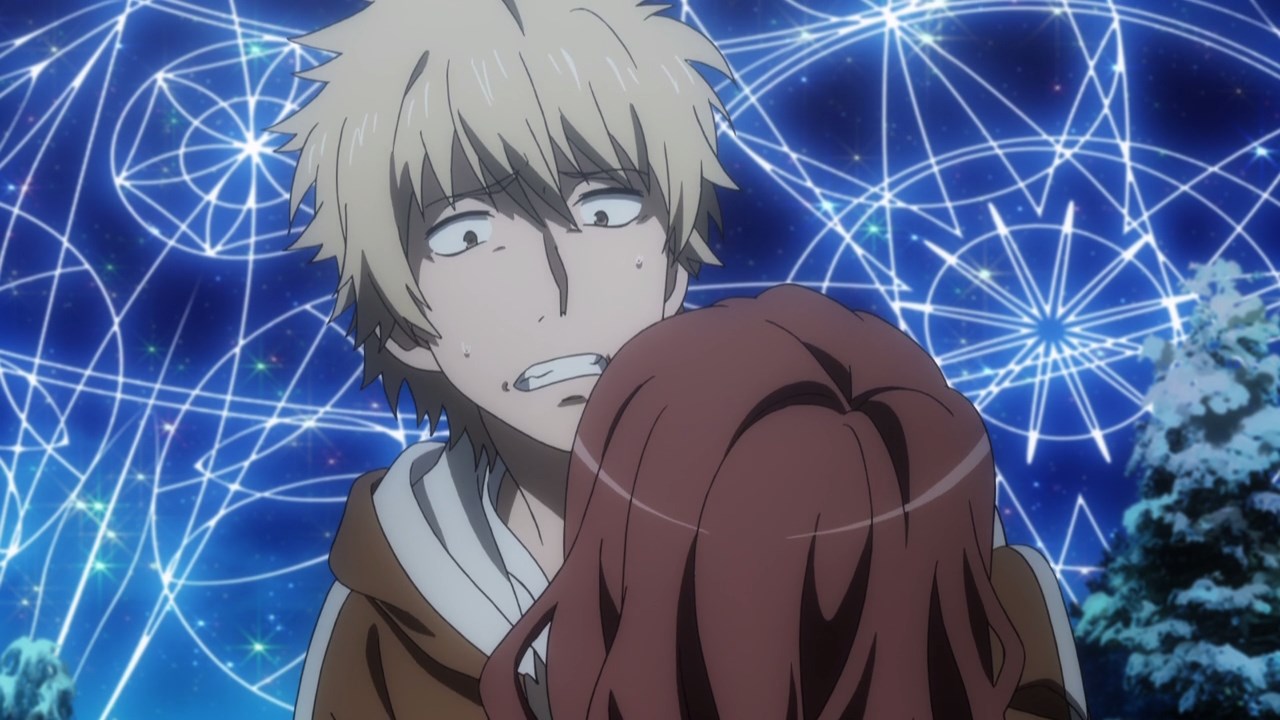 Instead, Shiage Hamazura wants to save her because c’mon, he wants to bring back the good times at ITEM.

But in order to bring back those memories, Shiage will have to find Rikou first. Man, what happened to her anyway? 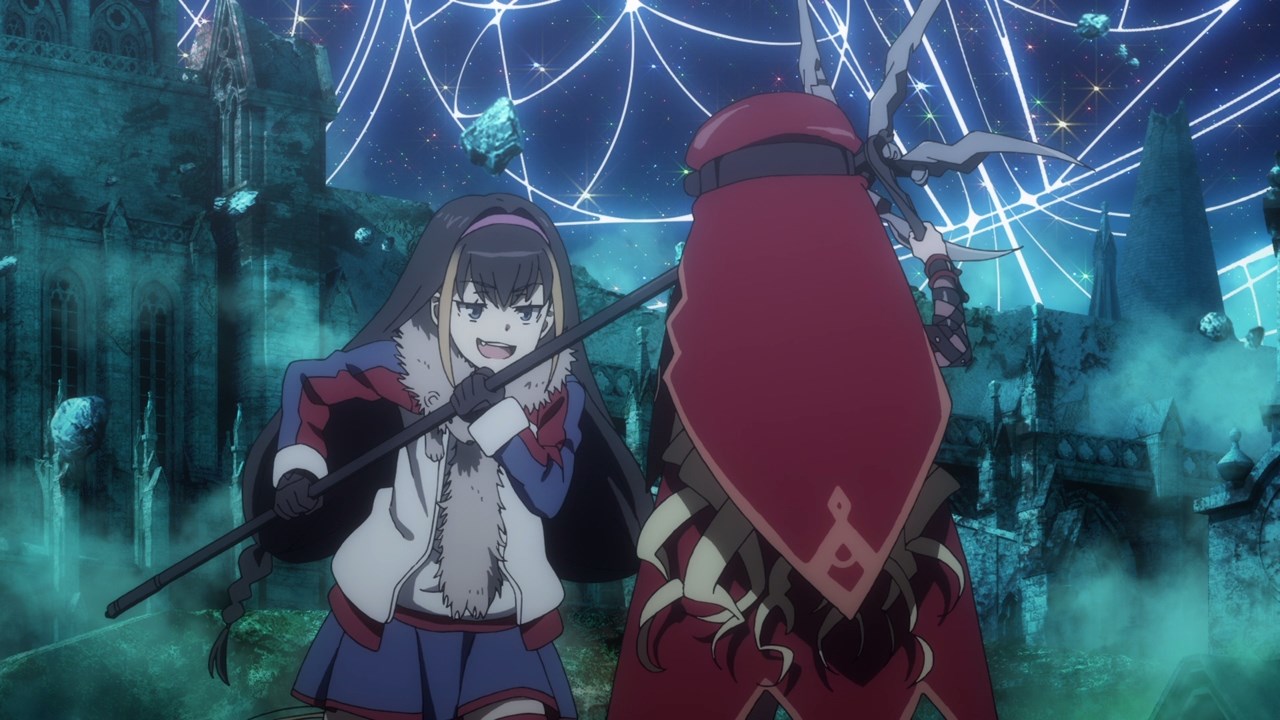 Meanwhile, here’s Lessar as she managed to get up towards the Star of Bethlehem. I wonder if she found a missile or a jet plane to get up there?

Also, Lessar stumbled upon a certain Sasha Kruezhev, which Sasha proceeds to retaliate since she considers Lessar as a threat. 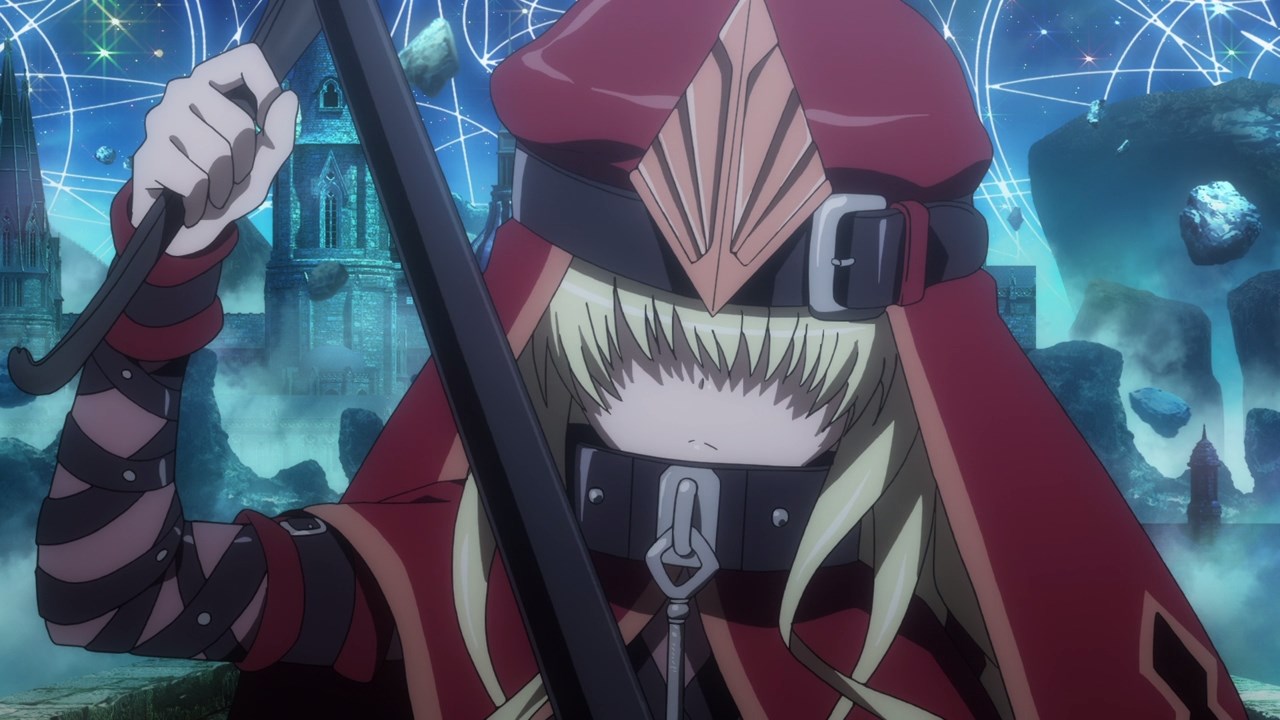 But after some convincing that she’s an ally, Lessar and Sasha Kruezhev made a truce as they decided to find Touma Kamijou together. 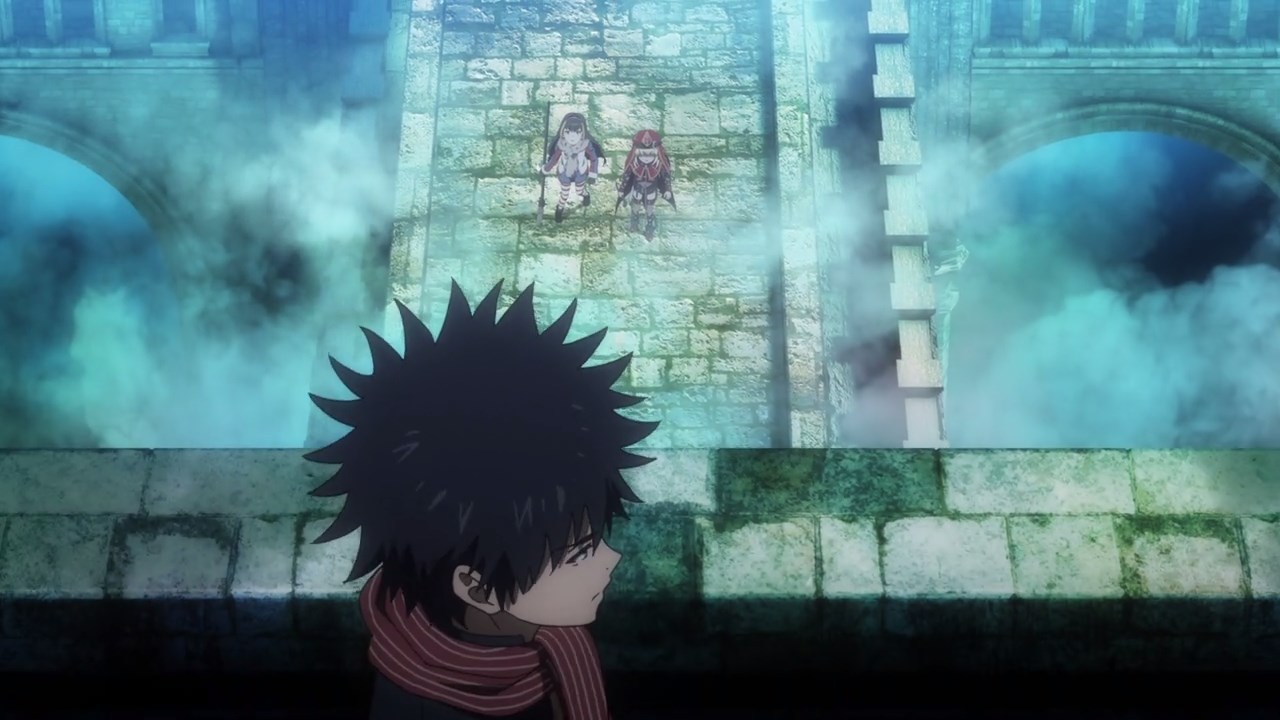 On the contrary, they don’t need to find high and low because Touma Kamijou is already here… 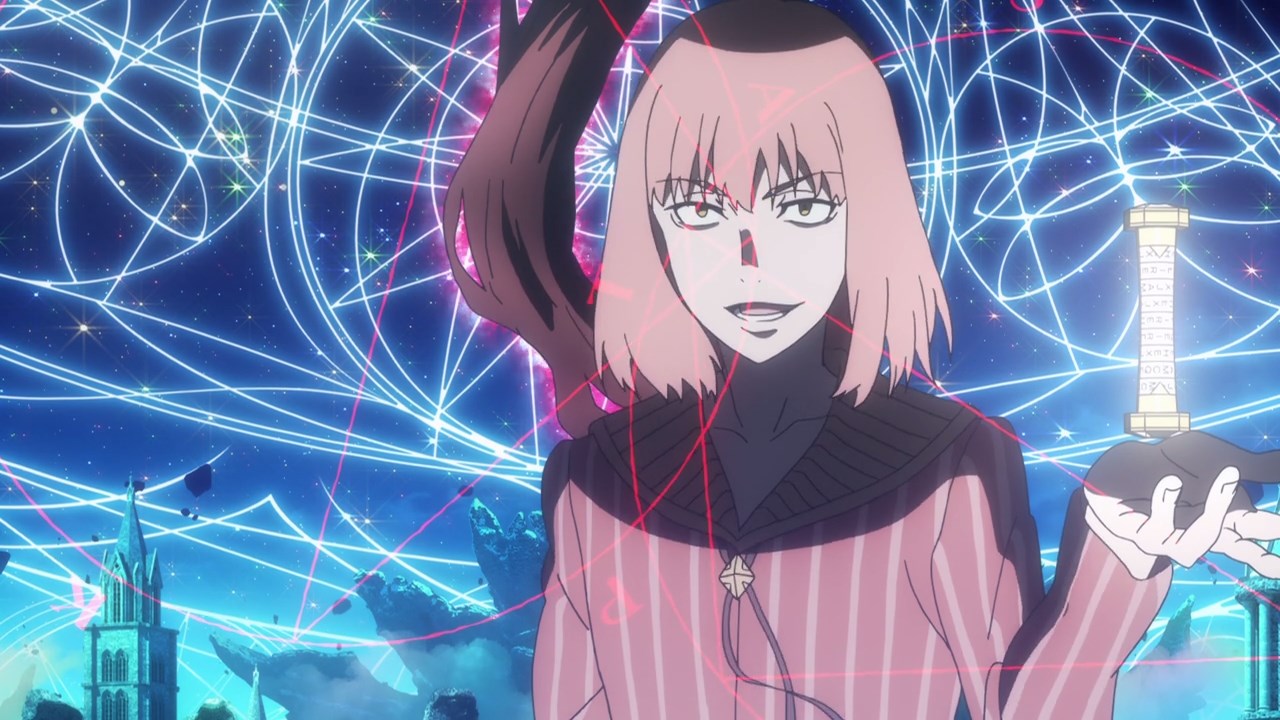 …fighting against Fiamma of the Right where he’ll demonstrates one of the grimoires from Index Librorum Prohibitorum, in addition to his monstrous Holy Right arm of course. 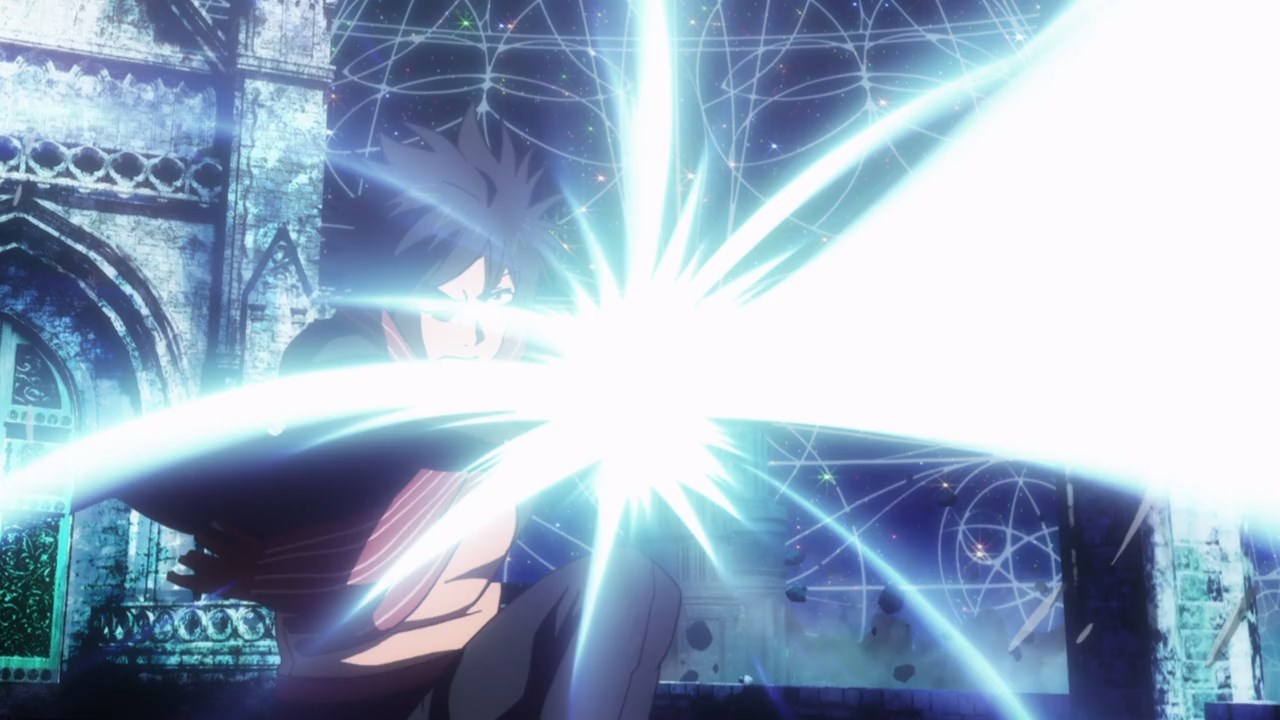 But you know what, Touma will just block Fiamma’s magic attacks with his Imagine Breaker. Easy as making an apple pie! 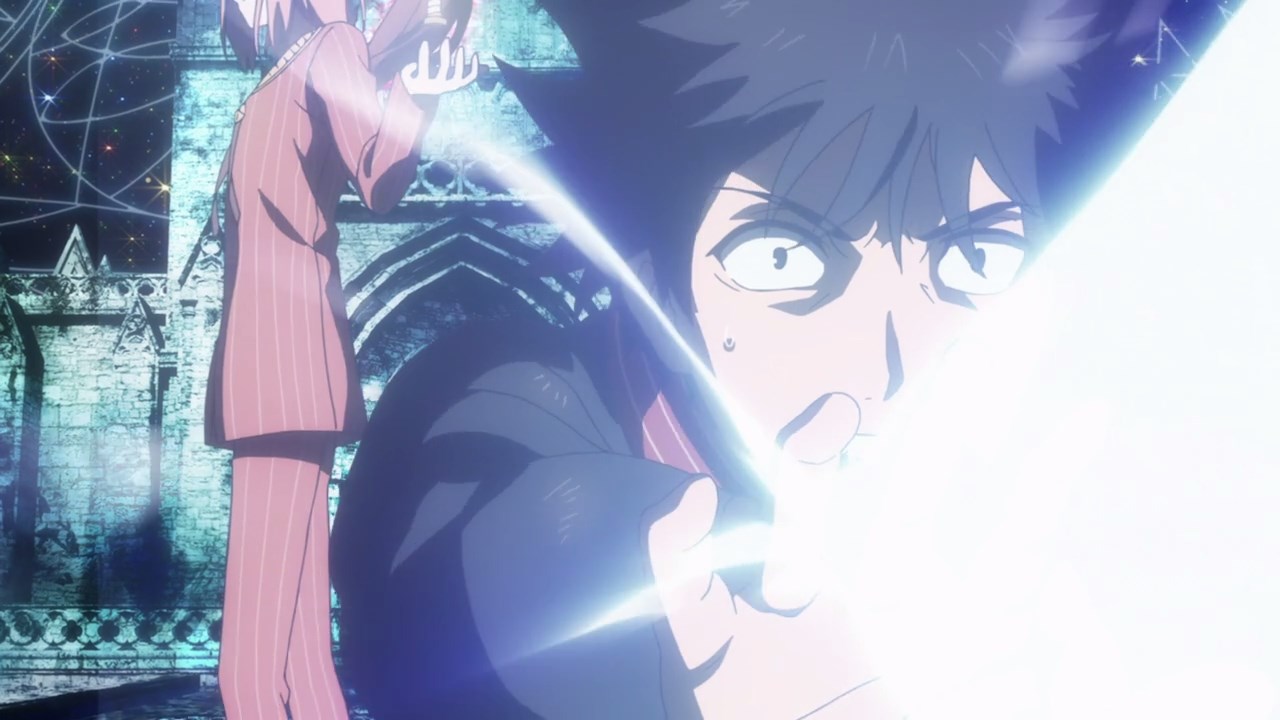 Unfortunately for Touma, that attack was just a decoy as Fiamma went behind him where he’ll take Touma’s right arm cleanly. 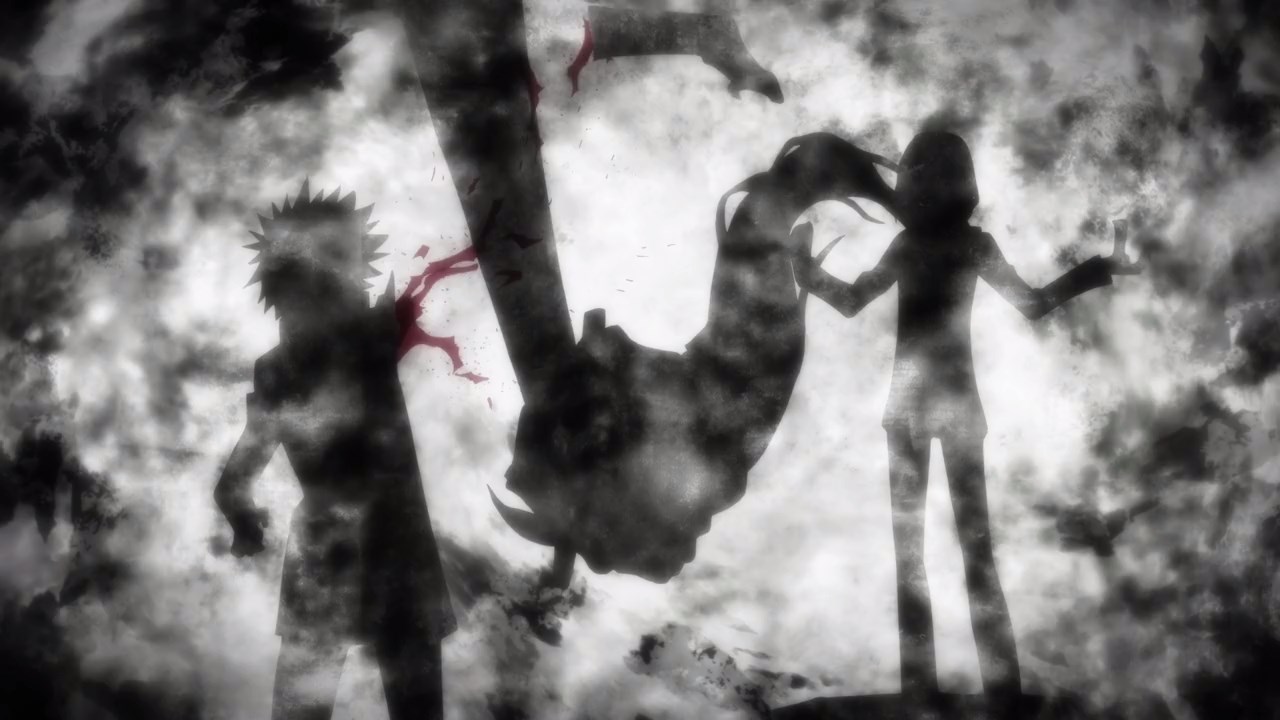 And the only way to do it is to cut Touma’s arm is by swinging a giant sword. And you know what, it works! 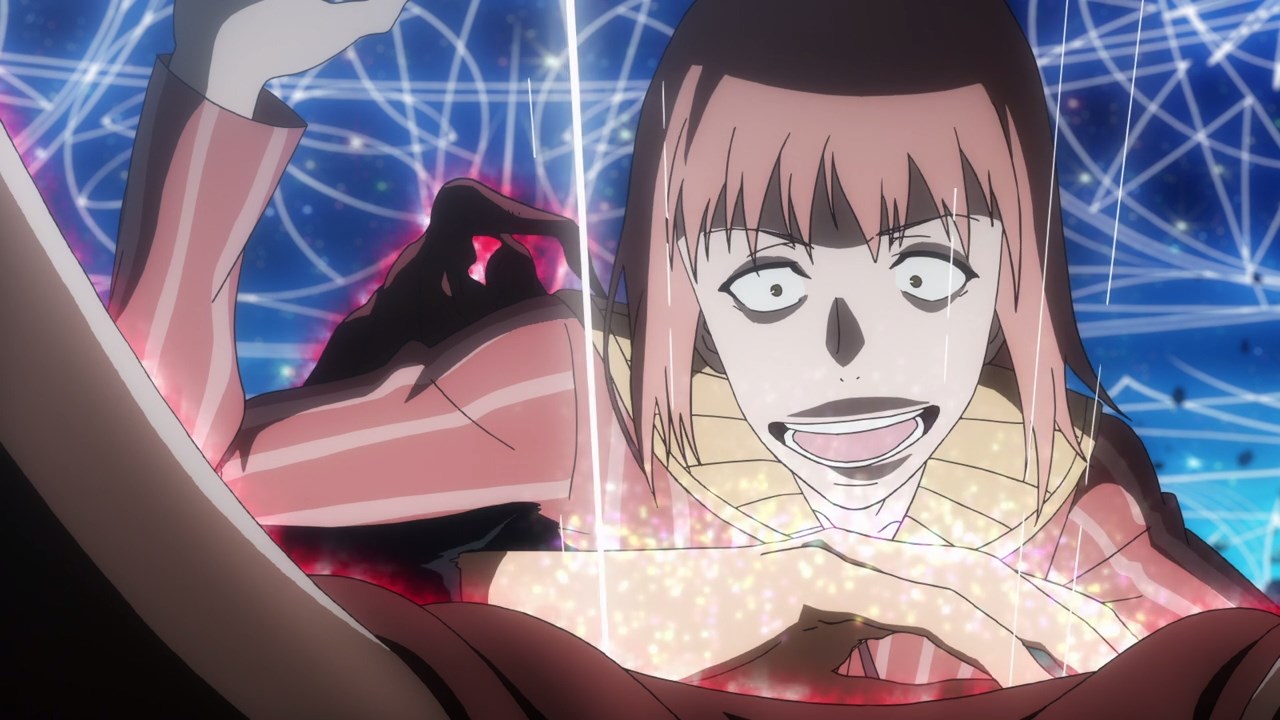 And now, Fiamma went ecstatic as he finally got the final piece of the puzzle. Man, Fiamma’s face makes me want to punch him! 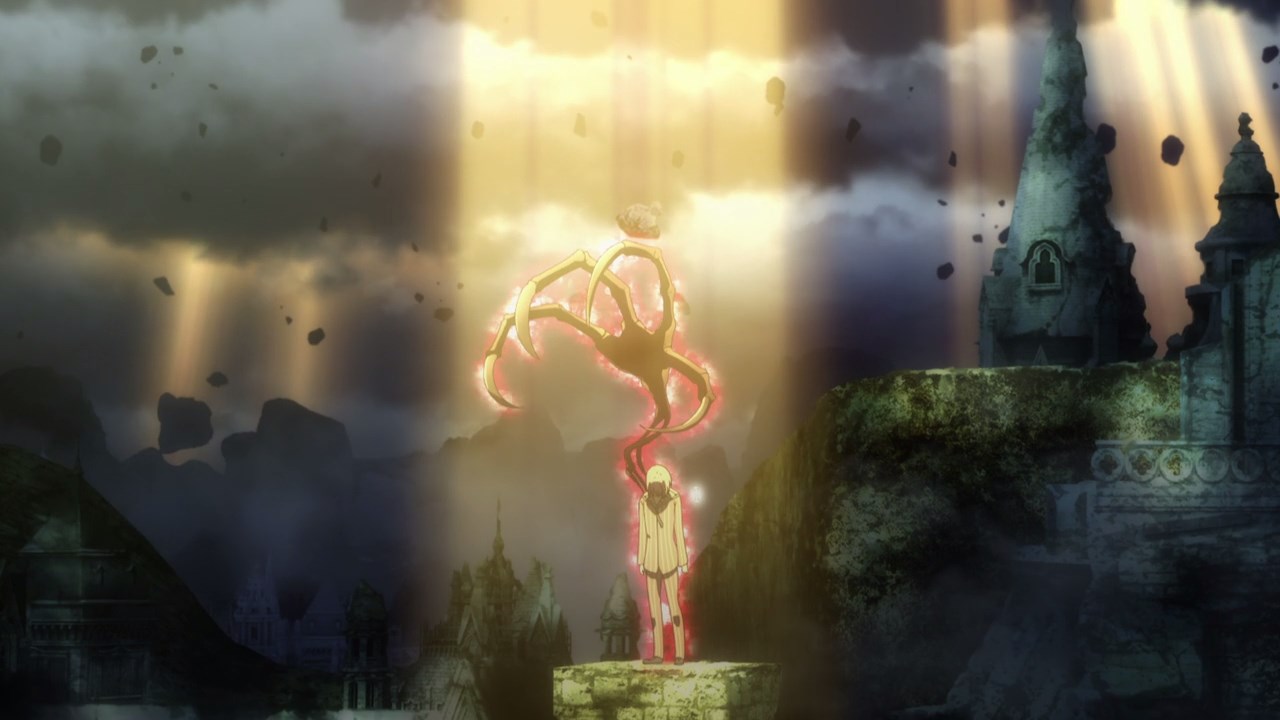 Soon, the heavens open up as the angels sing their praises now that Fiamma of the Right has finally possessed the elusive Imagine Breaker.

Now that he got all the pieces, it’s time for Fiamma to rule the world and bring peace in his own way, which I doubt that he’ll do the latter because Fiamma is a scumbag. But first, Fiamma needs to kill Touma Kamijou since he’s outlived his usefulness. 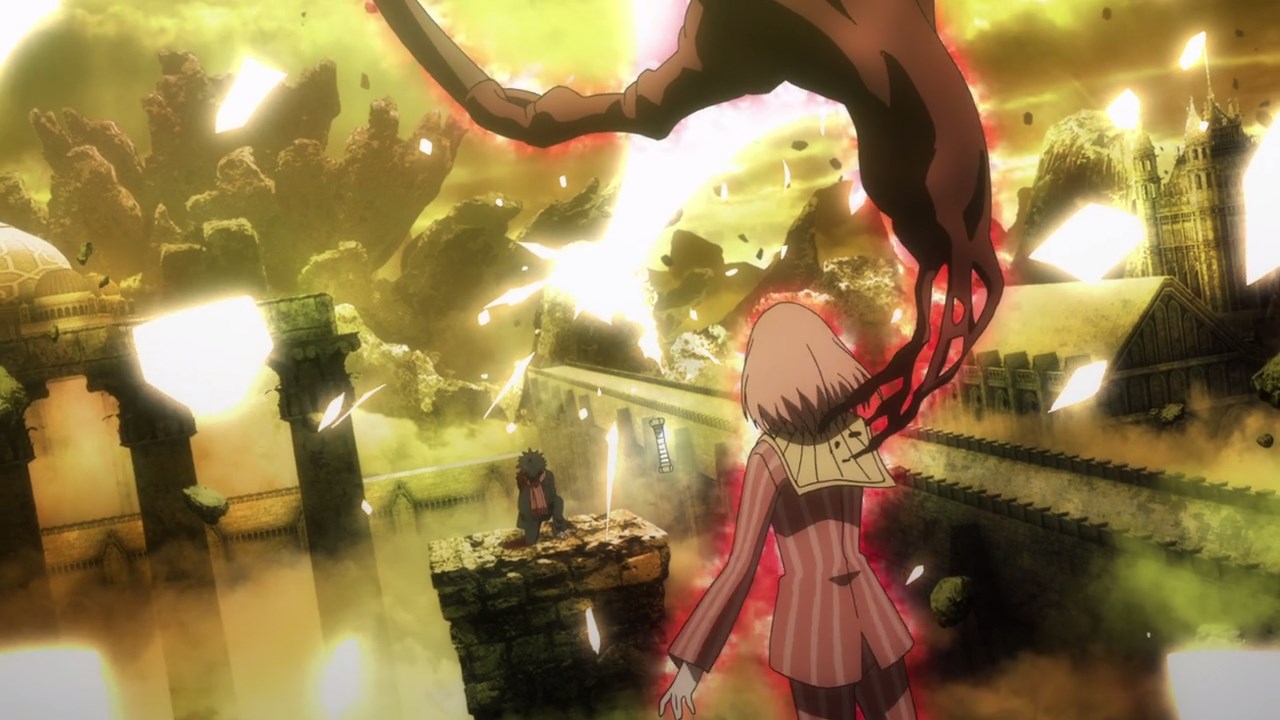 But then again, Fiamma of the Right’s time of greatness was stopped by an unknown force. 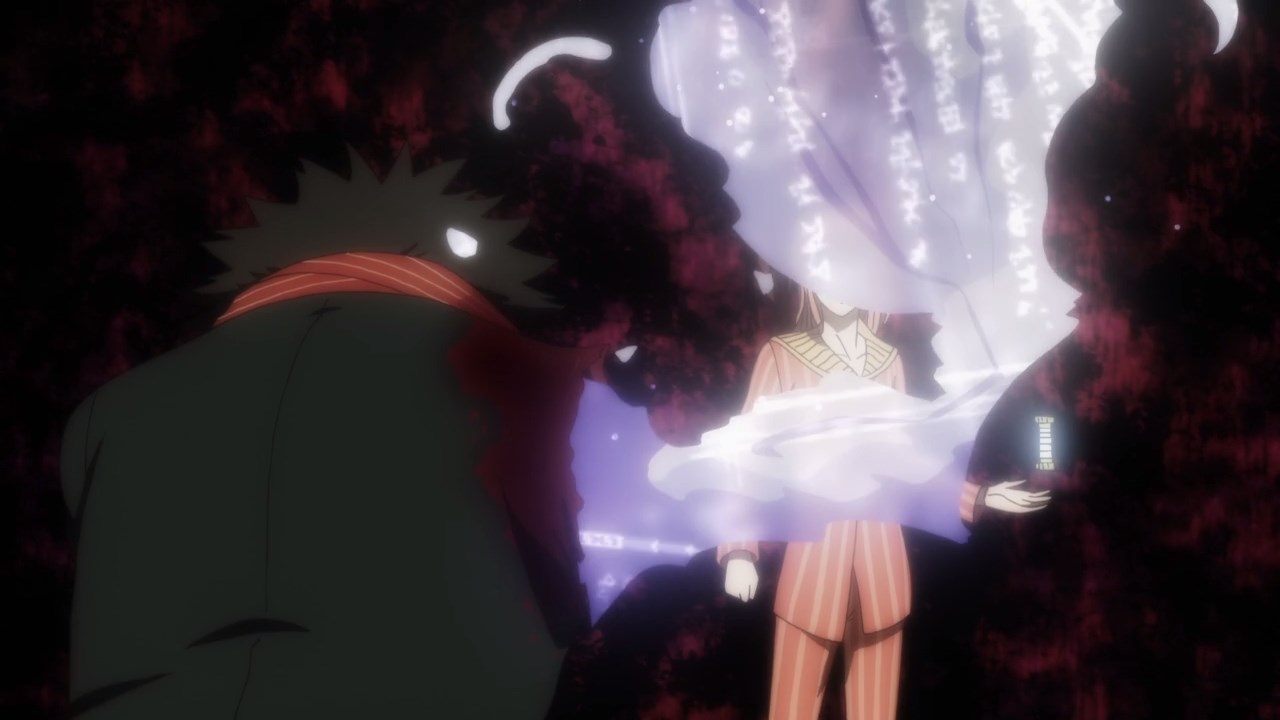 Ladies and gentlemen, I present you Touma’s secret weapon: Beyond the Right Hand. It’s a forbidden weapon that it strikes fear towards everyone who attempts to take Touma’s right arm. 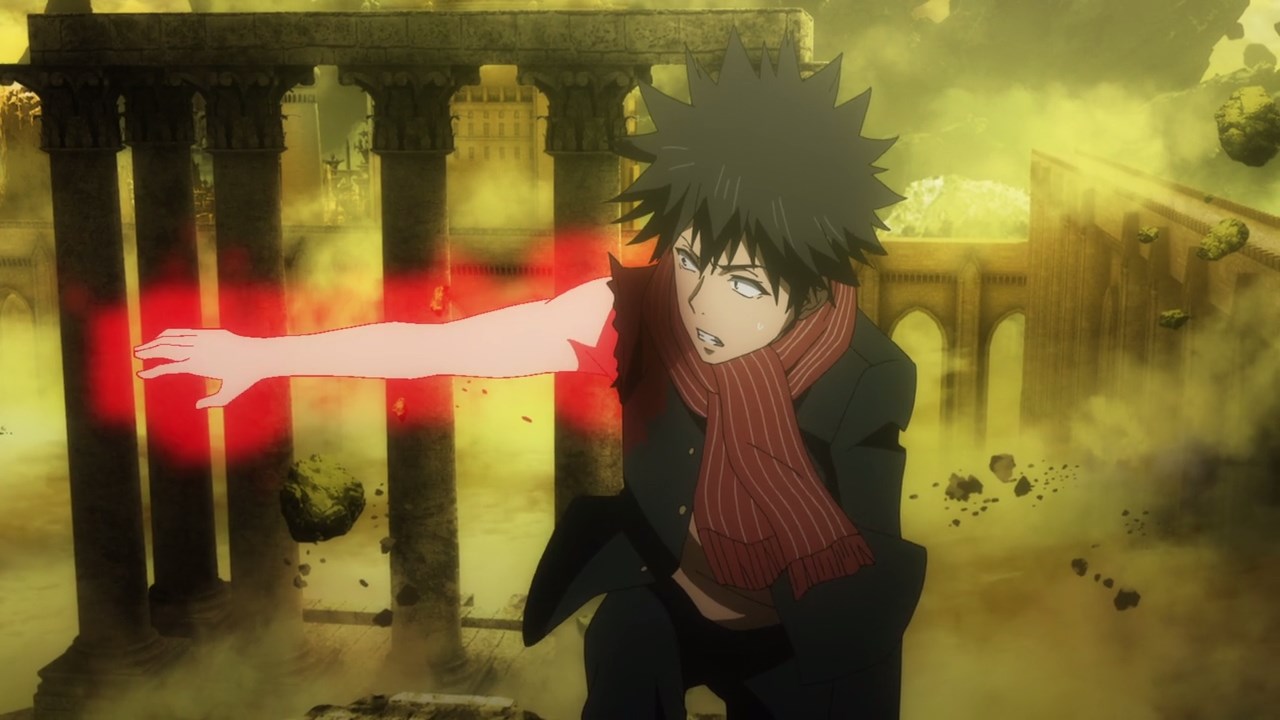 Of course, Touma Kamijou decides to take his Imagine Breaker back instead of overwhelming Fiamma, much like how he defeated Aureolus Izzard after haphazardly cutting Touma’s right arm.

In any case, this makes Fiamma’s attempt to take Touma’s Imagine Breaker pretty pointless. If he really wants to get the Imagine Breaker without Beyond the Right Hand taking it back, Fiamma needs to get the force that holds Touma’s right arm in its place. 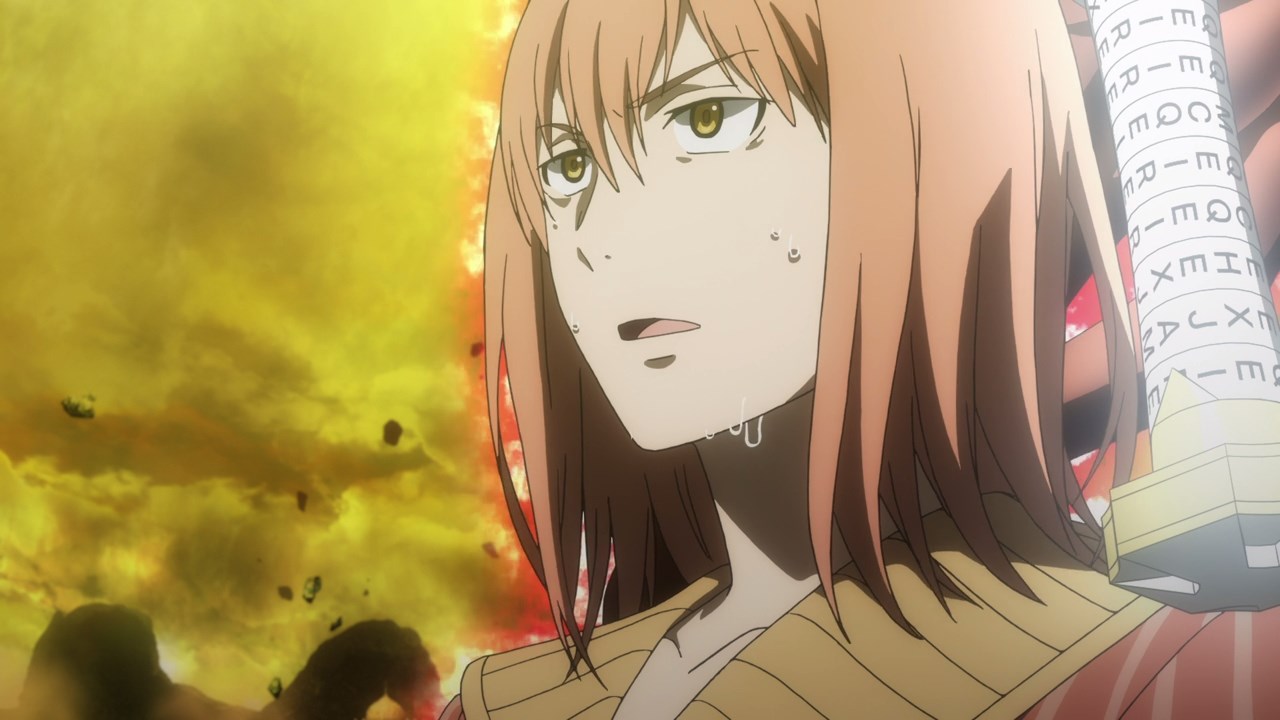 And look at Fiamma’s face. He’s sweating buckets as his plans are starting to crumble. Anyways, Fiamma of the Right is really afraid that he’s about to lose against a Level 0 punk from Academy City.

But seriously though, Fiamma can’t save the world because by the time the 3rd World War ends, Earth is beyond repair and his miraculous powers can’t save everyone. Heck, even God would forsake Fiamma for his ambition! 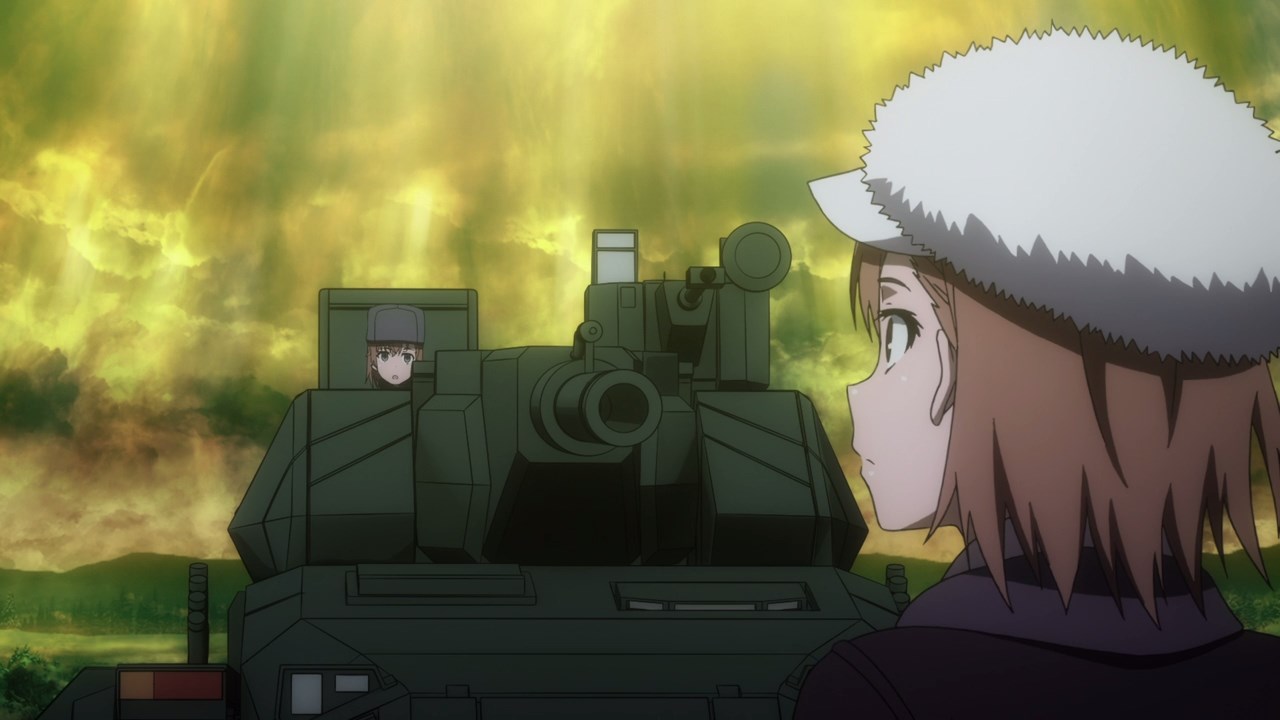 One last thing, here’s MISAKA No. 10777 and Mikoto Misaka as they’re finished dismatling some army before it reached its destination.

I have to say that it’s probably the Russian Army since they’re planning to launch a biological weapon. Well, at least the villagers are safe. 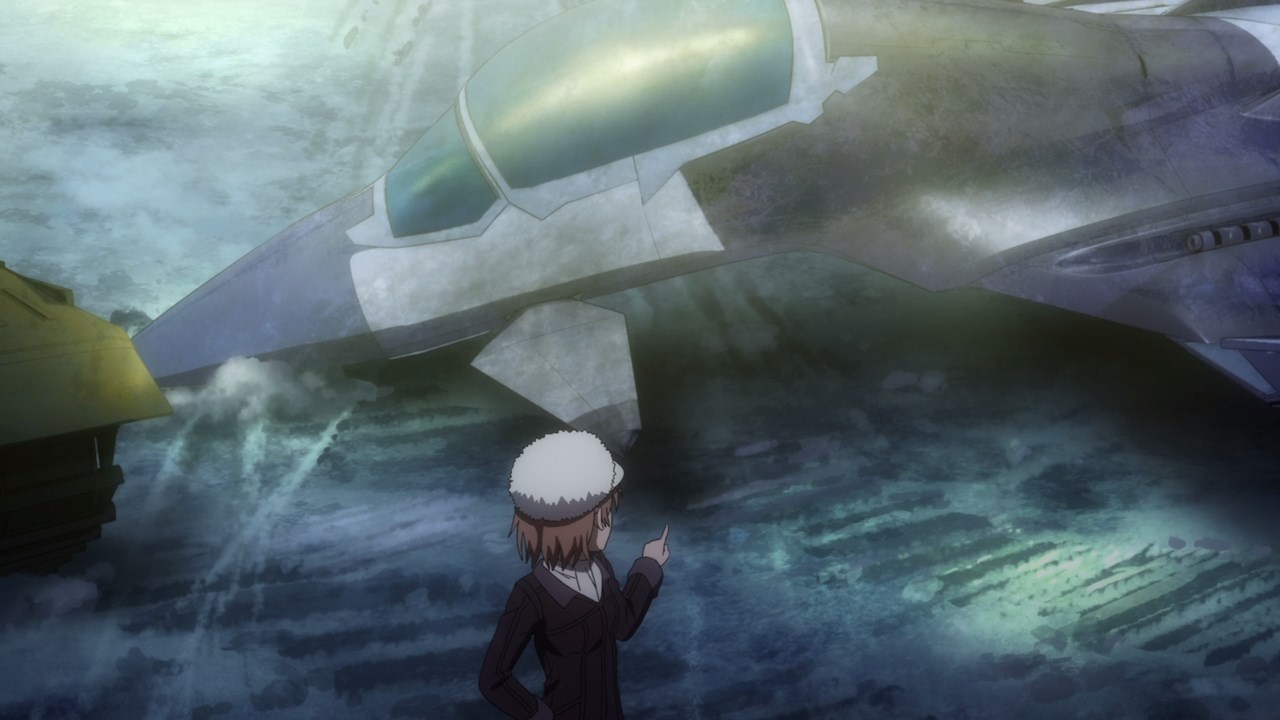 Anyways, I’m done with this episode of To Aru Majutsu no Index III. With Fiamma of the Right failed to get Touma’s Imagine Breaker completely, despite cutting Touma’s right arm with a giant sword, looks like Touma Kamijou will have a resurgence on the next episode. Then again, will Touma managed to defeat Fiamma or he’ll need to wait for some allies to help him?

With that said, I’ll see you next time to find that out!