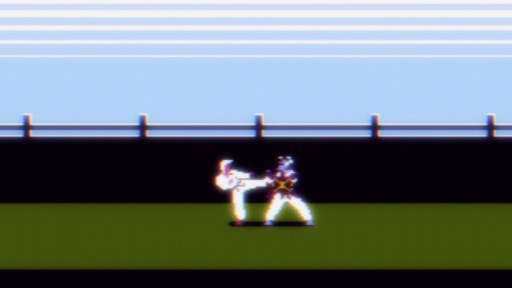 Well everyone, we’re back for more High Score Girl as we have Haruo Yaguchi playing Karateka on the Famicom, who is training day and night to defeat an emerging fighting game powerhouse that is Koharu Hidaka.

Then again, his mind is somewhat confused right now ever since Hidaka confessed her love to him. Of course, he doesn’t understand love as Haruo is an idiot where his mind is focused on playing games. 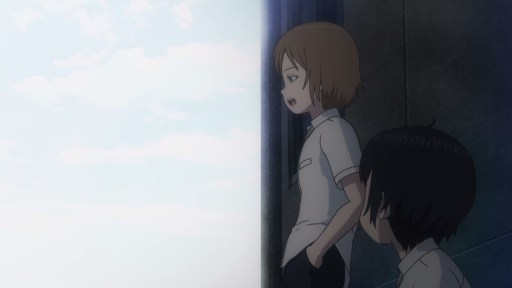 However, there are some like Miyao who understands Koharu’s frustration of not reaching her feelings towards Haruo’s heart. I feel you Miyao ’cause I pity Haruo for not taking hints.

In any case, looks like Yaguchi will have to take Hidaka’s challenge because it would be bad if he refused to fight.

Meanwhile, we have a new character introduced named Makoto Ono, Akira’s older sister. Unlike Akira though who doesn’t speak at all, Makoto is easy-going and lively.

Too bad that Makoto is being constrained by the draconian rules that was imposed by the Ono family, especially Moemi Gouda who wants to turn them into proper ladies, not game addicts. 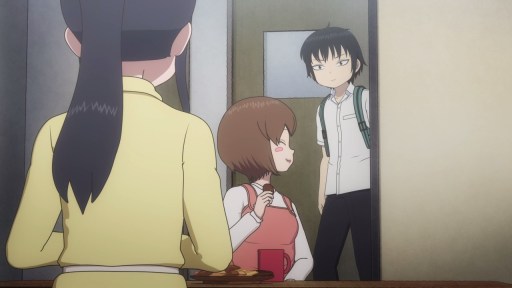 Speaking of Moemi Gouda, seems that she visited the Yaguchi residence but she’s not here to have a nice chat with Namie Yaguchi.

In fact, Moemi-san told Haruo to stay away from Akira Ono from now on, saying that he’s a bad influence to her upbringing. Really Gouda, that was harsh!

Now then, here’s Haruo’s mother Namie as she’s back from her laundry duties. C’mon, she doesn’t want her clothes getting soaked in the rain.

Of course, she told Moemi Gouda that her son is not a nuisance. In fact, Namie has no regrets on letting her son grow at his own pace (apart from academics), so therefore she gave Moemi-san some advice on raising Akira Ono that she won’t have any regrets on it.

Then again, Moemi Gouda will continue her spartan way of raising Akira Ono. Then again, I think Akira would eventually rebel later in her life because of Moemi’s strict tutoring.

Meanwhile, here’s the Ono family butler where he told Haruo that he was relieved from his job. That’s because Moemi found out that he’s secretly giving Akira a Sega Game Gear to play when she’s bored.

So while the replacement butler will be very strict compared to him, he told Haruo to give his young lady a time of her life before she’ll be relegated on studying during summer. Well then, since Haruo Yaguchi has free time, I think it’s time to invite Akira Ono to the arcades…

…starting by playing Technos Japan’s beat ’em up named Sai Yu Gou Ma Roku, also known as China Gate where it’s based on the classic Journey to the West.

For Akira and Haruo, playing video games regardless of genre is great. Well, they’ll have a good time beating this game. 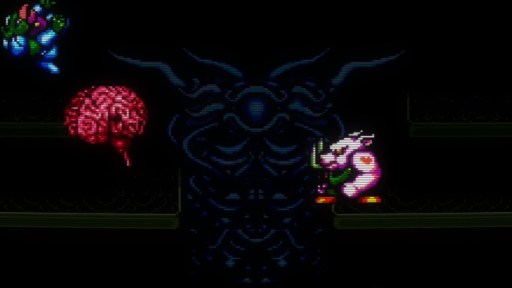 That’s until they reached the final boss where Akira’s expression changed upon seeing its true form.

Well, looks like she’ll have nightmares upon seeing this floating brain. But you know what, that’s nothing compared to Splatterhouse where everything is downright creepy!

And thus, we’ve reached the end of this special episode as Akira Ono and Haruo Yaguchi end their escapade by visiting the local festival and buy snacks. Isn’t it nice that I want to stay this moment forever?

But afterwards, they’ll go onto their separate ways where Akira will have a rigorous tutoring from Moemi-san, while Haruo will focus on defeating Koharu. However, Yaguchi told Ono not to give up when facing the wrath of Gouda.

Anyways, tune in next time where Haruo Yaguchi will brush up his fighting game skills in order to win. Then again, how did Koharu Hidaka became a good player in the first place? I guess we’ll find that out!