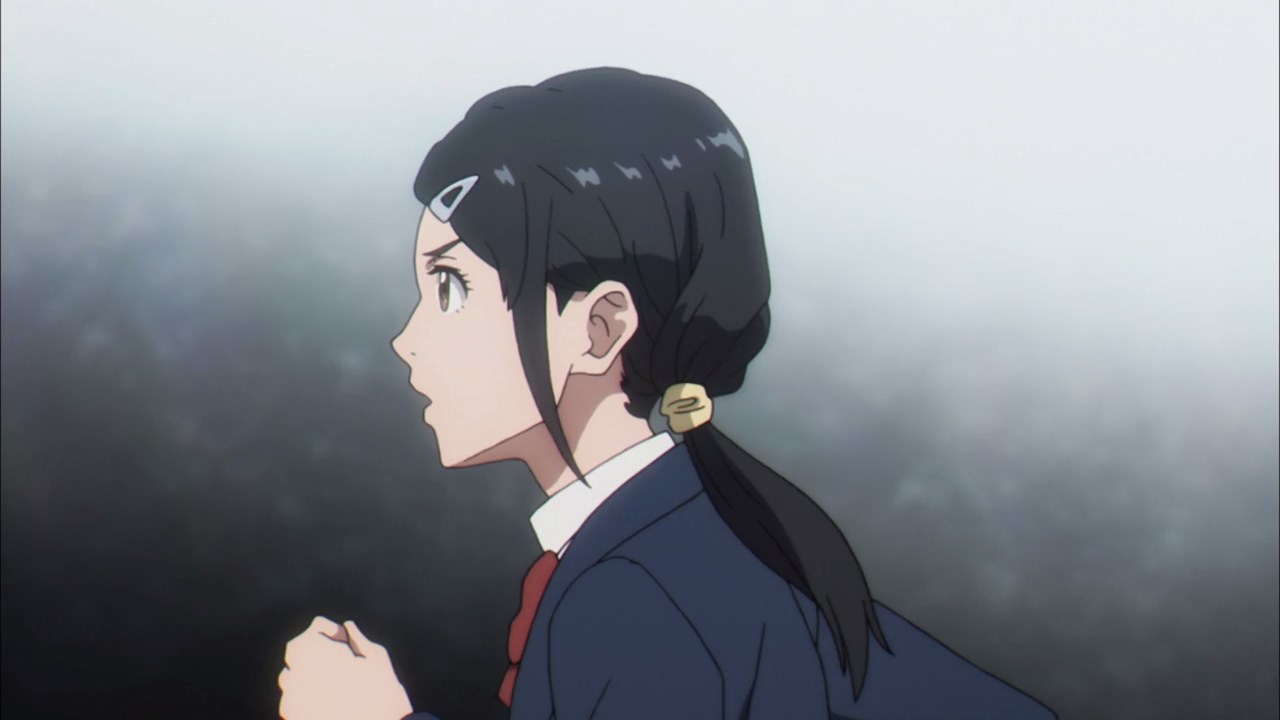 This is it, the final episode of Boogiepop Doesn’t Laugh where Kei Niitoki climbs up to the top of the Moon Temple to find a way to get out of this crumbling structure and confront the King of Distortion. 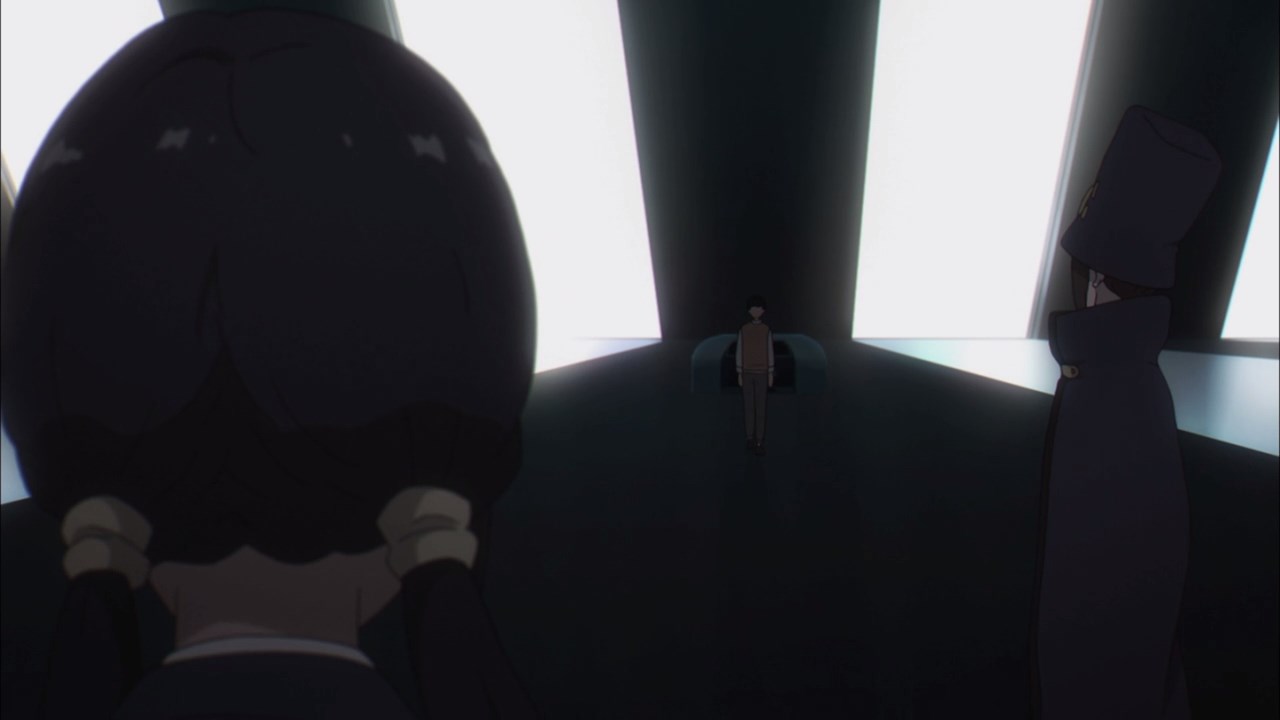 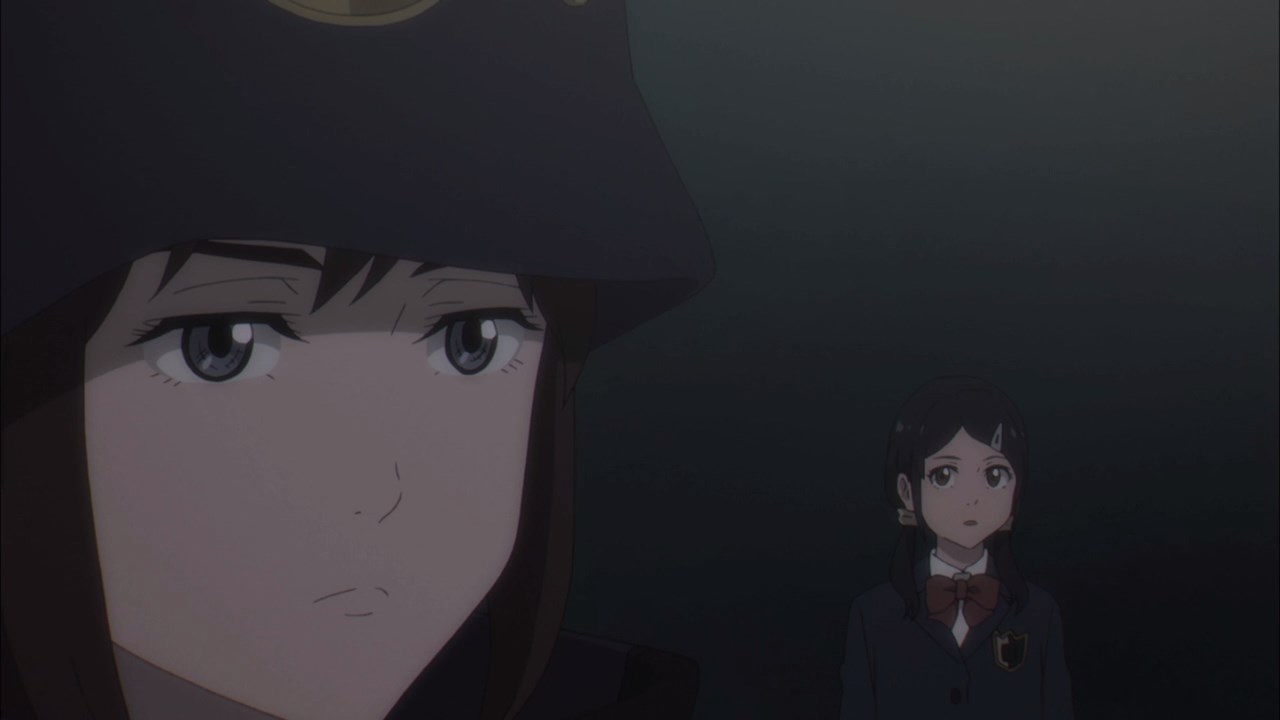 On the other hand, it appears that Kentarou Habara went missing after typing the password to unlock the doors, but it appears that typing “Stairway to Heaven” is not gonna work.

With that said, it’s time for Boogiepop to face the King of Distortion… 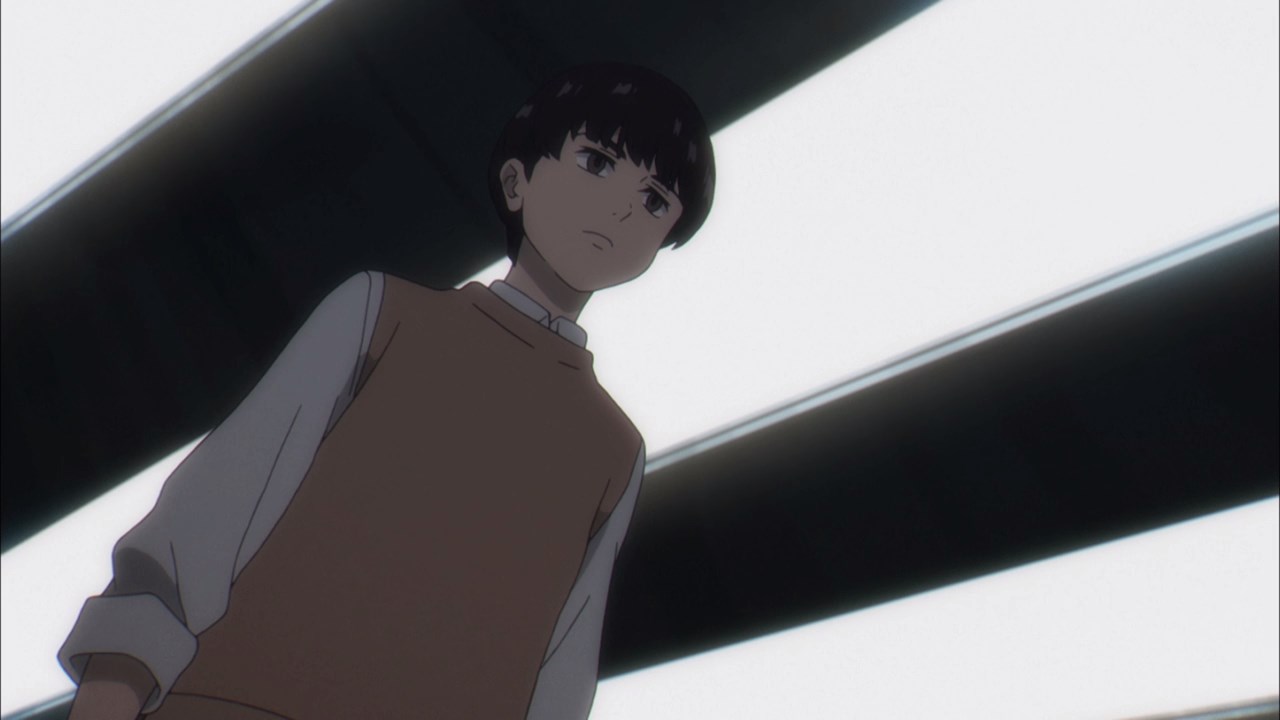 …which turns out that it was manifested from Shirou Tanaka, hence the King of Distortion takes control of Shirou’s body due to his guilt of not understanding Naoko Kamikishiro’s feelings, rather than creating an illusion based on Tanaka or Kamikishiro’s likeness.

And despite his claims that he wants to heal the distortion in people’s hearts by turning into gold, his actions like trapping the attendees inside the Moon Temple is very concerning that it’s no wonder why the King of Distortion’s existence is dangerous, yet Boogiepop doesn’t see him as a malevolent being. 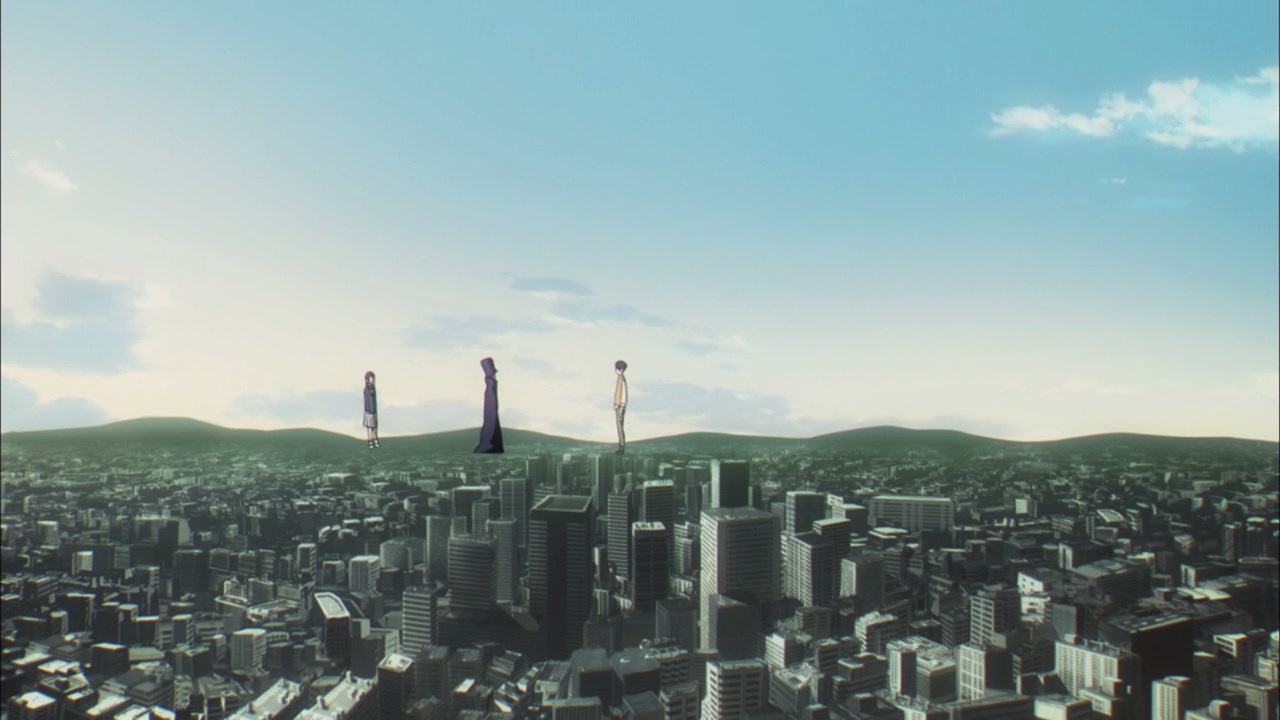 Anyways, it appears that the King of Distortion sent both Kei Niitoki and Boogiepop outside the Moon Temple where they’re floating in mid-air.

Of course, it’s just an illusion created by the King of Distortion, although Boogiepop is not convinced that he’s not the enemy that needs to be defeated. I mean, it would be bad if Boogiepop killed Shirou Tanaka right here. 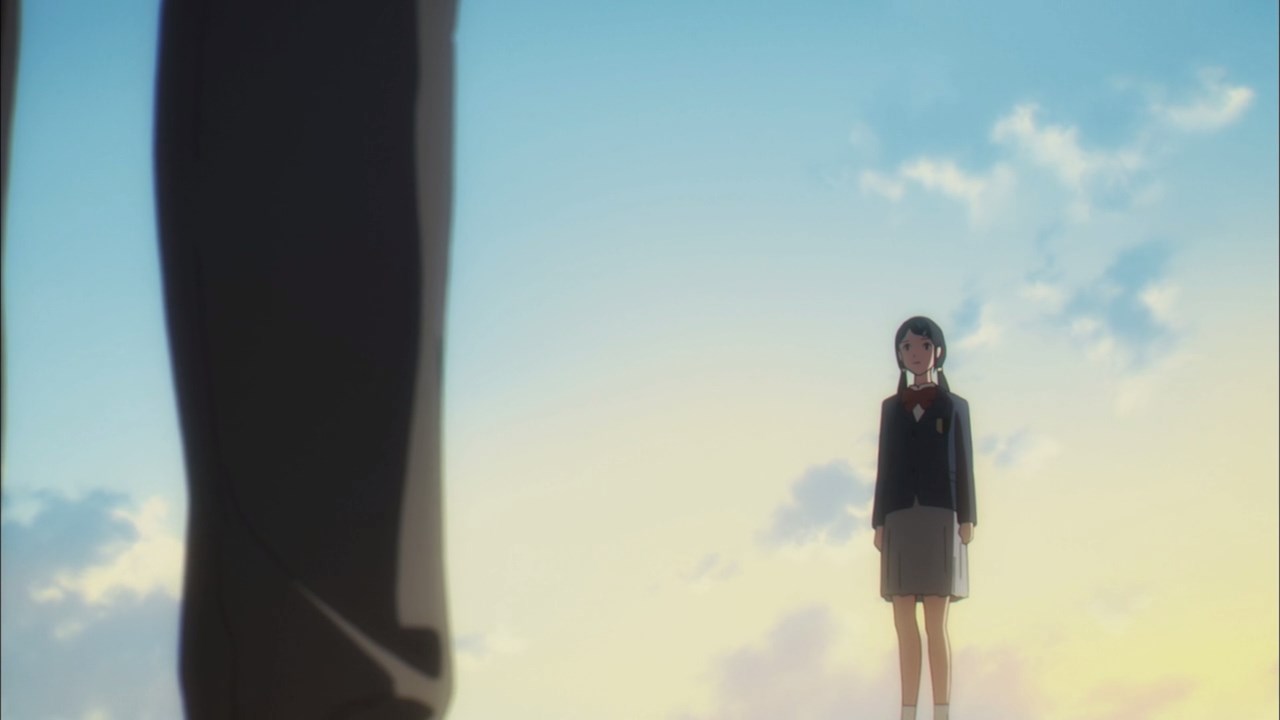 But you know what, I think it’s time for the King of Distortion to end his villainous act because Naoko Kamikishiro will be sad if her boyfriend becomes evil. In fact, Boogiepop is not the enemy he must defeat but rather himself. 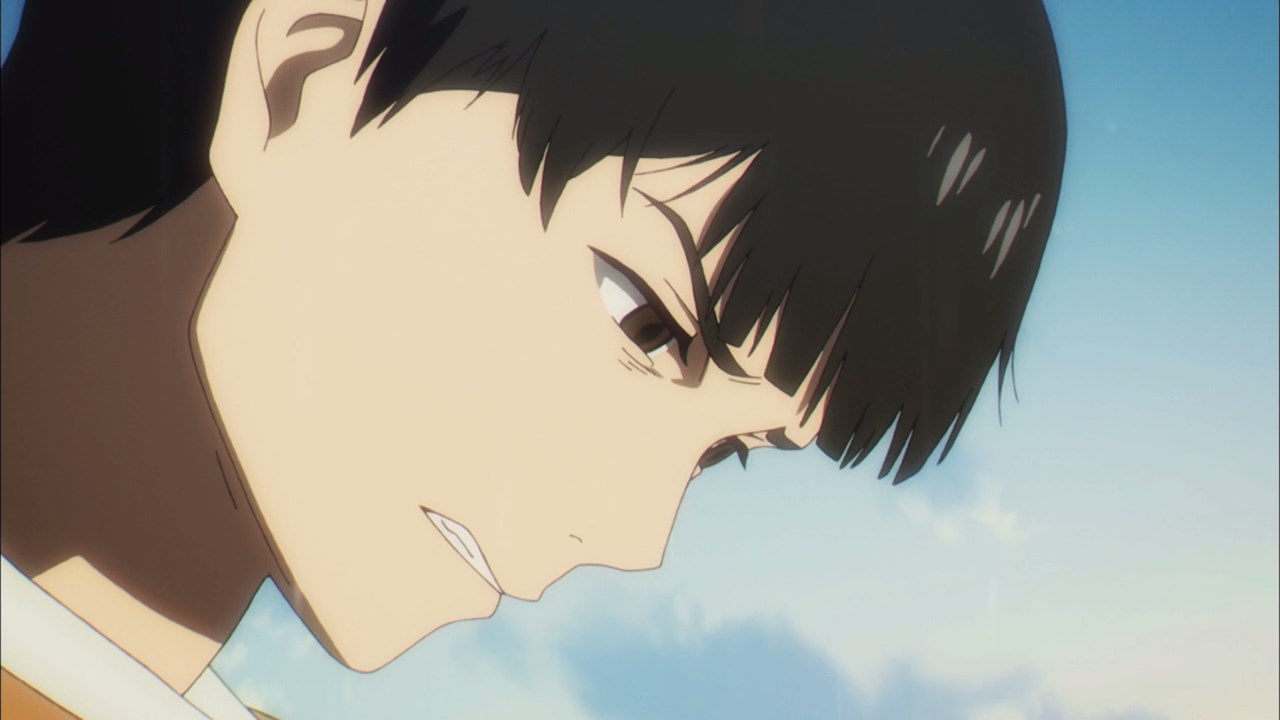 Of course, Kei asked Shirou if he’s really in love with Naoko-sempai in which he was caught off-guard with it. That hit him pretty hard as he’s not aware of Kamikishiro’s feelings until Niitoki pointed him out.

I guess the reason why the King of Distortion was manifested from Shirou Tanaka is not just because of his guilt, but also he’s doubting in regards to his relationship with Naoko Kamikishiro. 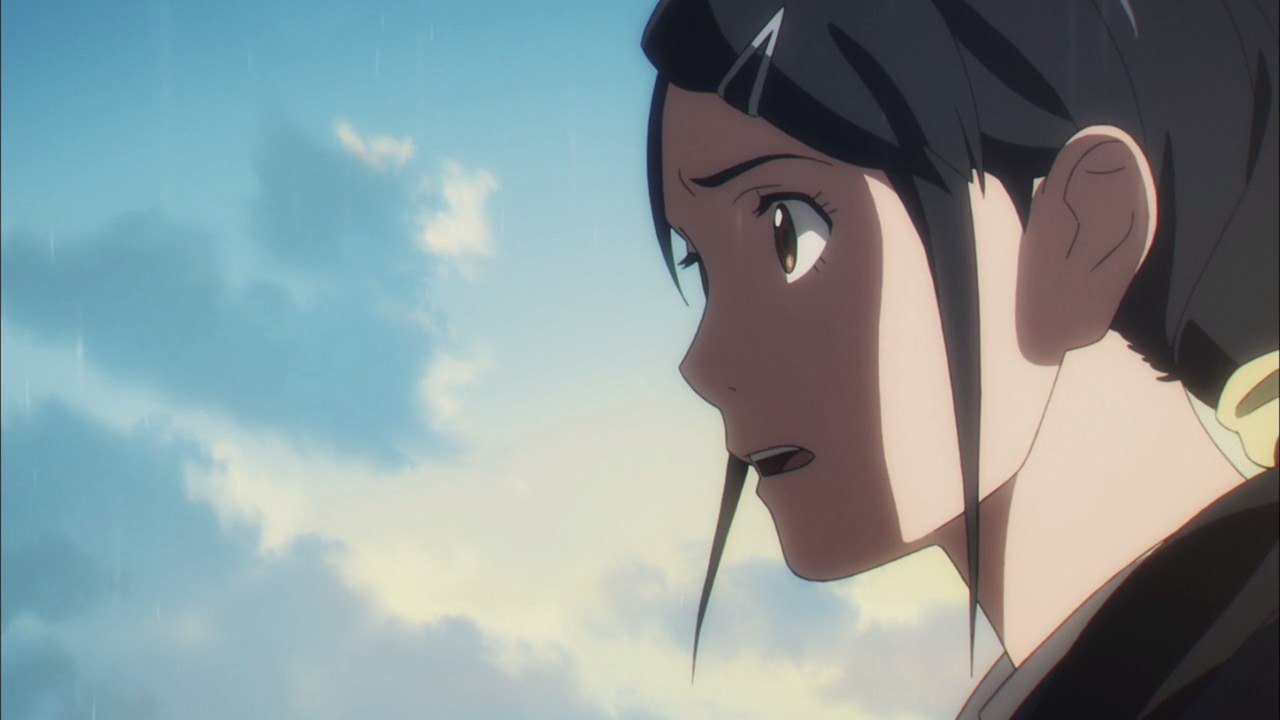 With that said, Kei Niitoki told everything in regards to Naoko Kamikishiro, which she wants Shirou Tanaka to take care of himself before worrying about other people. That’s the only advice that Naoko made towards her boyfriend before Manticore ends her life. 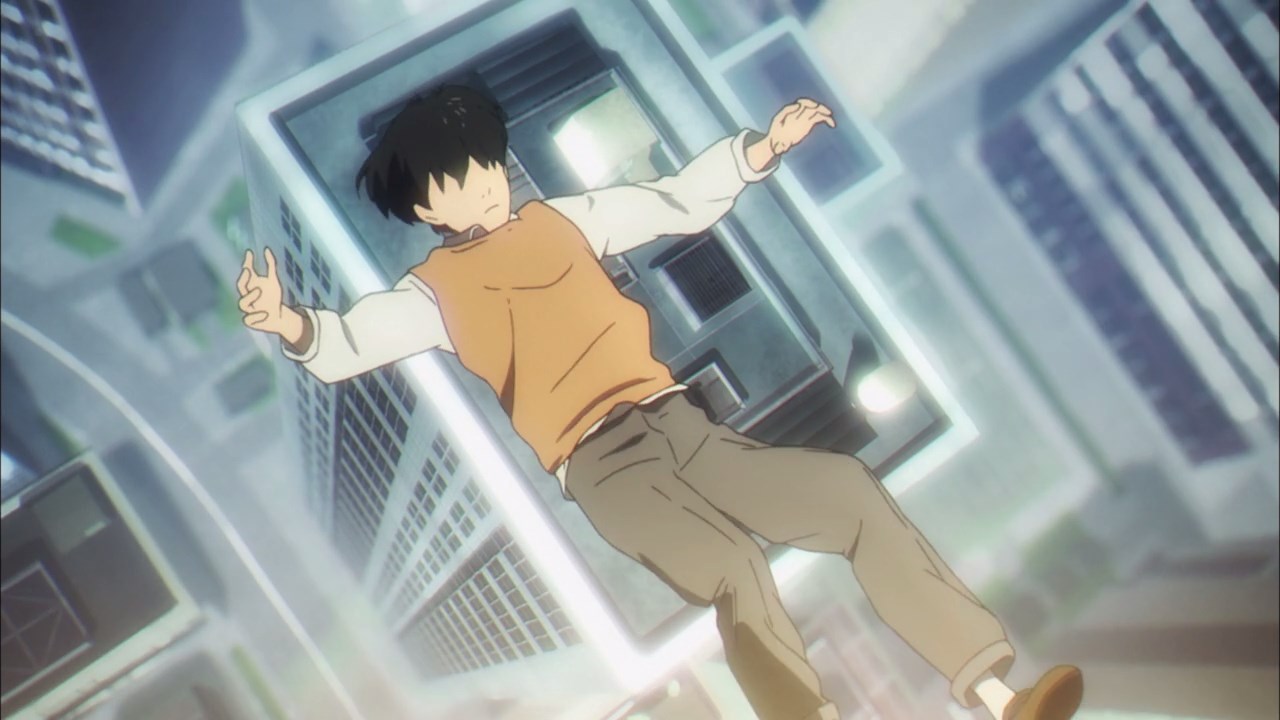 Thanks to Kei Niitoki, it appears that the King of Distortion has finally defeated and there’s no need for Boogiepop to end Shirou Tanaka’s life, although it would be bad if he continues to fall down towards his death.

But still, it was just a illusion so there’s no way Shirou would die from falling to the floor. 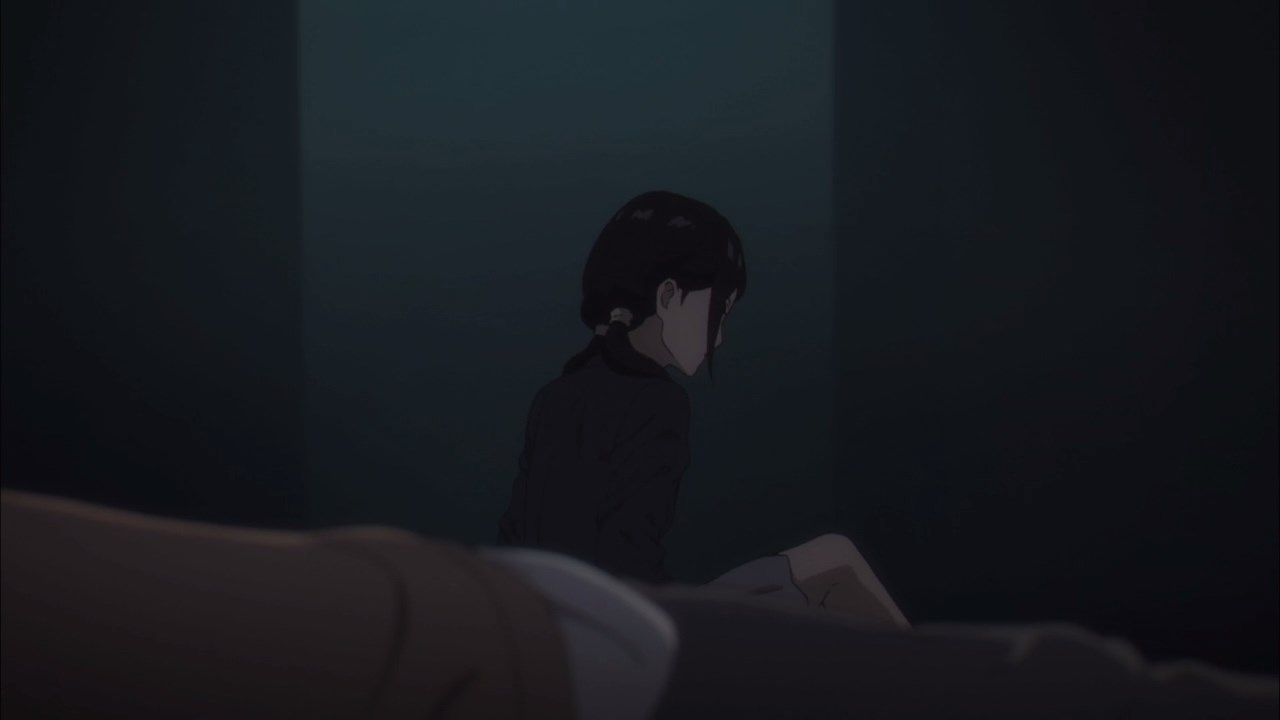 Anyways, it appears that they returned to reality as Kei Niitoki woke up from her dream. Then again, I don’t know what happened to either Kentarou Habara or even Boogiepop as they went missing. 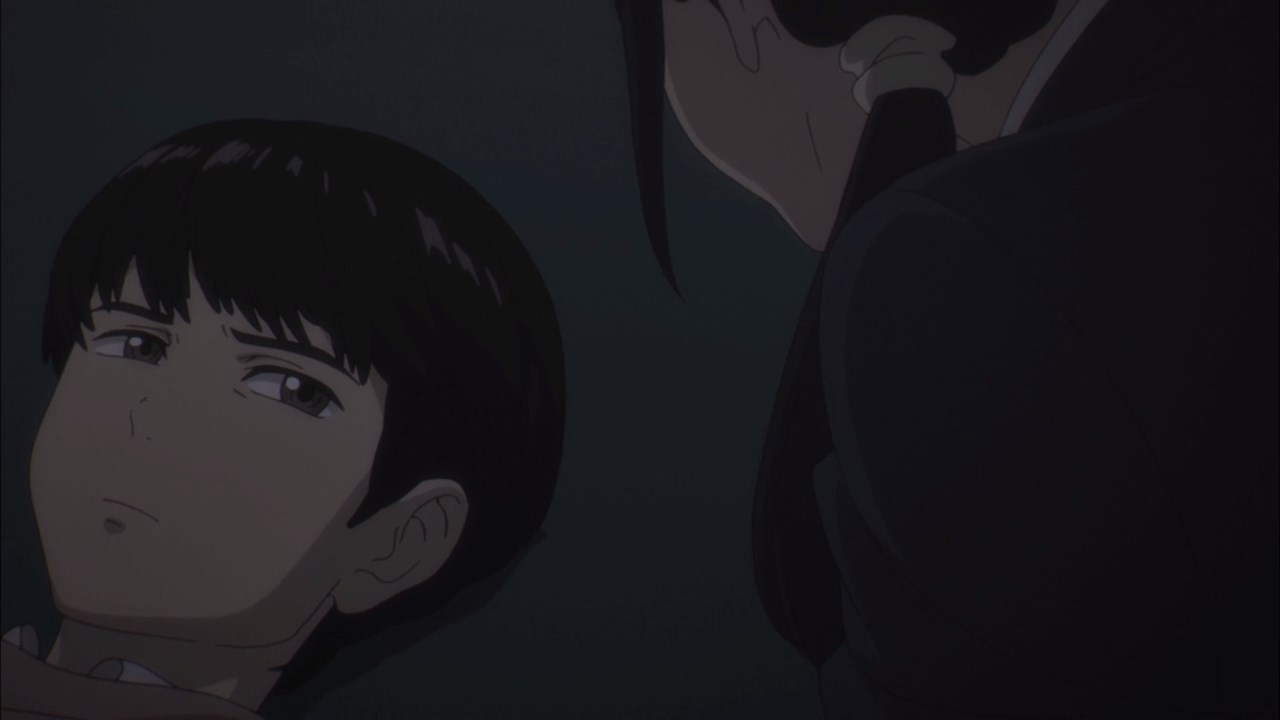 But, it appears that Shirou Tanaka regained consciousness as he instructed Kei to type the password in order to open the doors on the first floor, which will free the attendees that are currently trapped there. 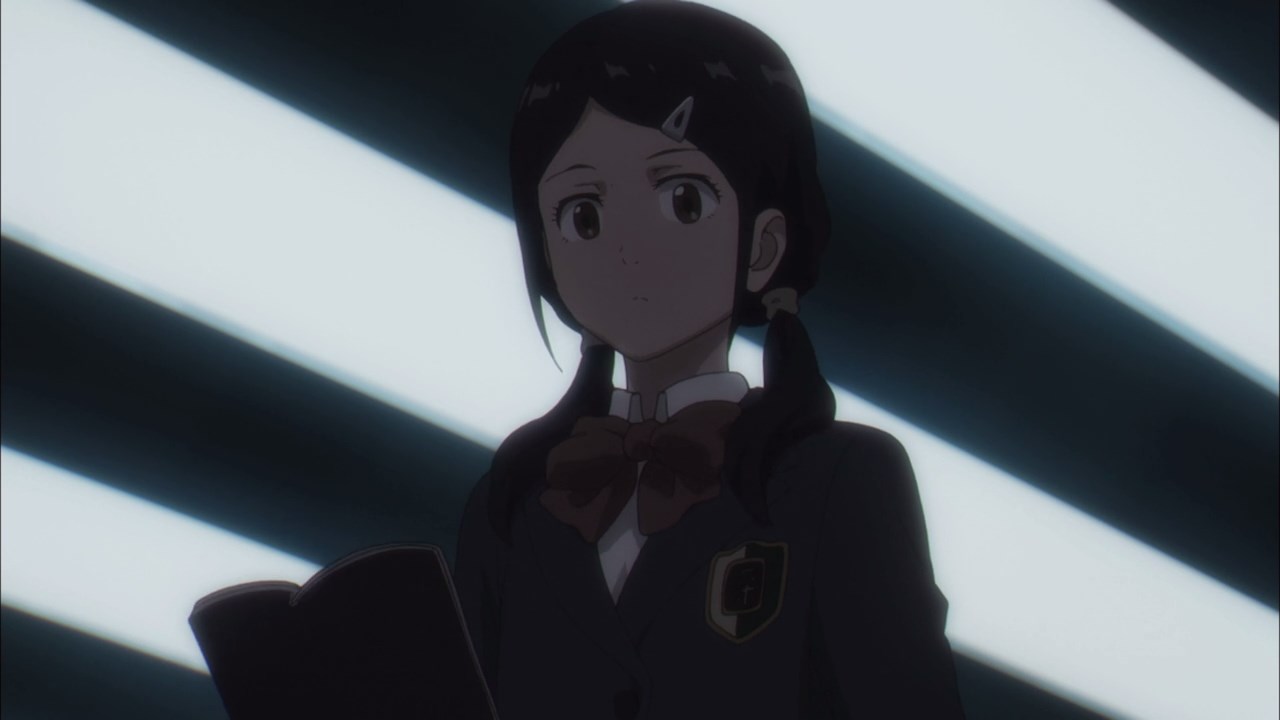 With that said, Niitoki types the password “Stairway to Heaven” to the console. However, it appears that a question pop up where Kei was asked in regards to Kyouichiro Teratsuki’s favorite song.

Unfortunately, she doesn’t know much about Kyouichiro’s personal life because he’s already dead. But then again, it could be that the question refers to her favorite music. 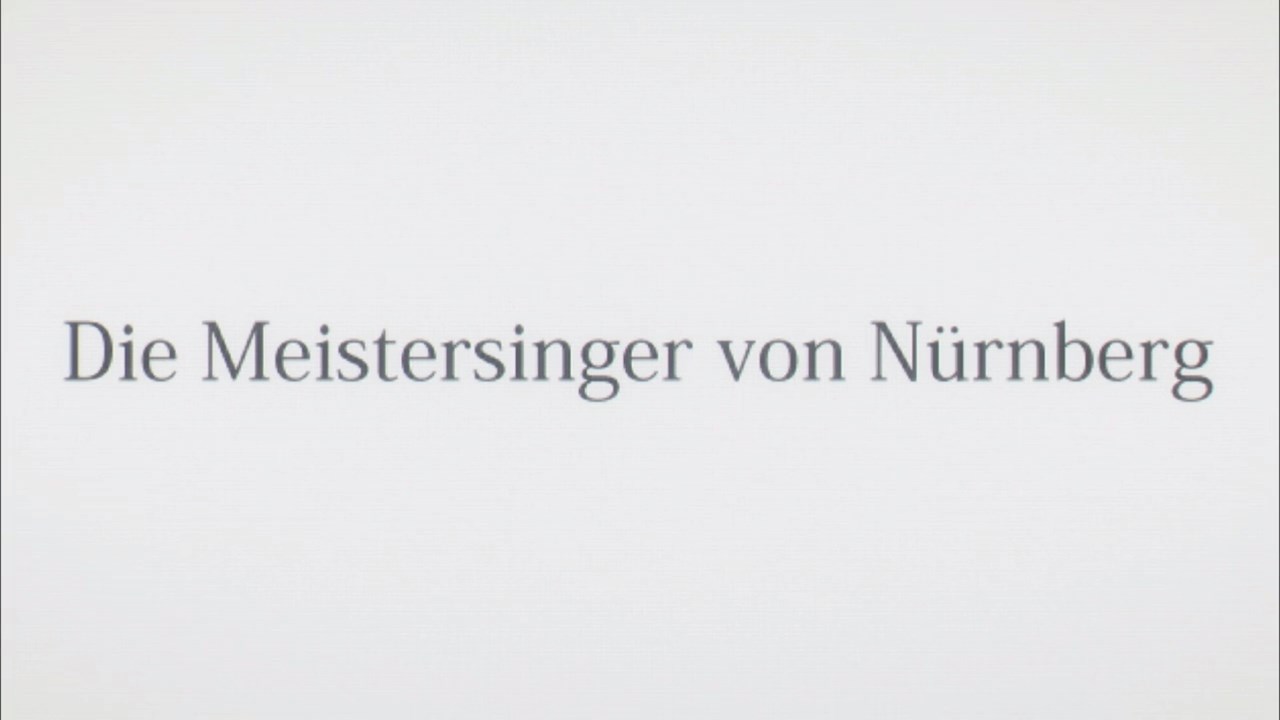 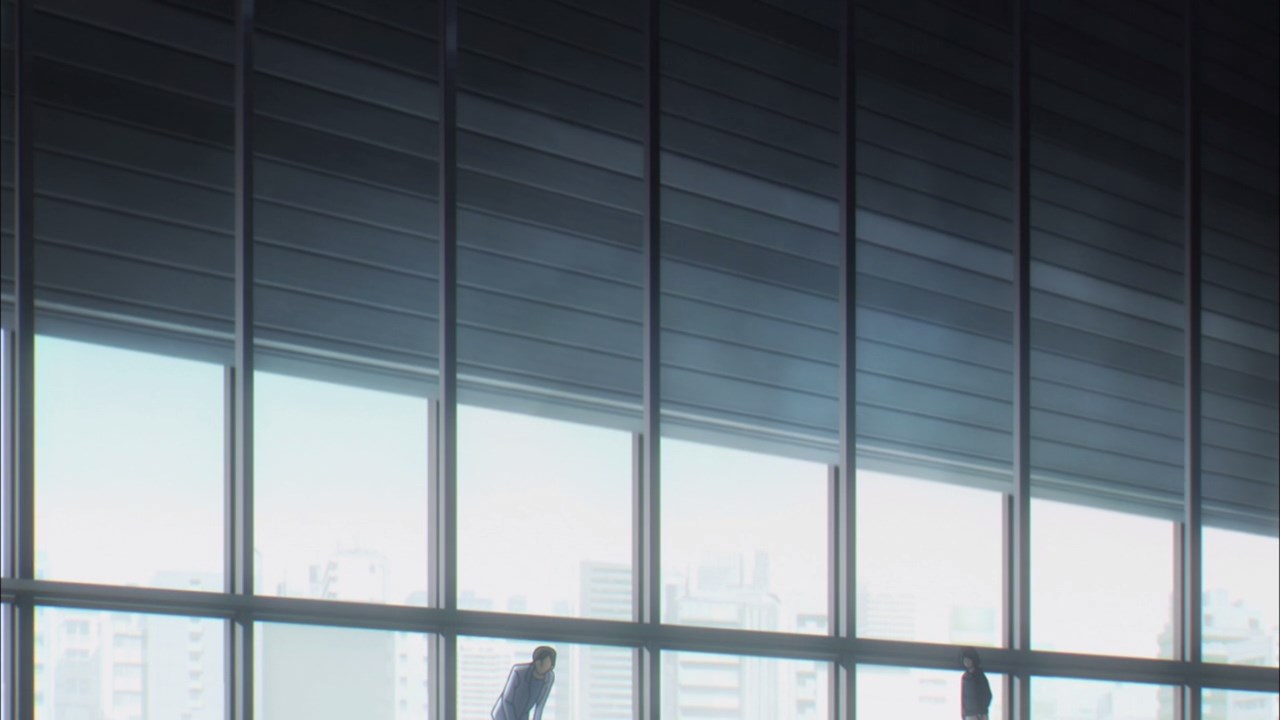 Surprisingly, it appears that typing one of Wagner’s song has unlocked the security doors at the first floor, meaning that the crisis inside the Moon Temple has finally ended as the attendees are finally free.

Although it would be better if they get out quickly since the building might collapse at any minute. Then again, the threat of having the Moon Temple collapsing is probably an illusion created by the King of Distortion. 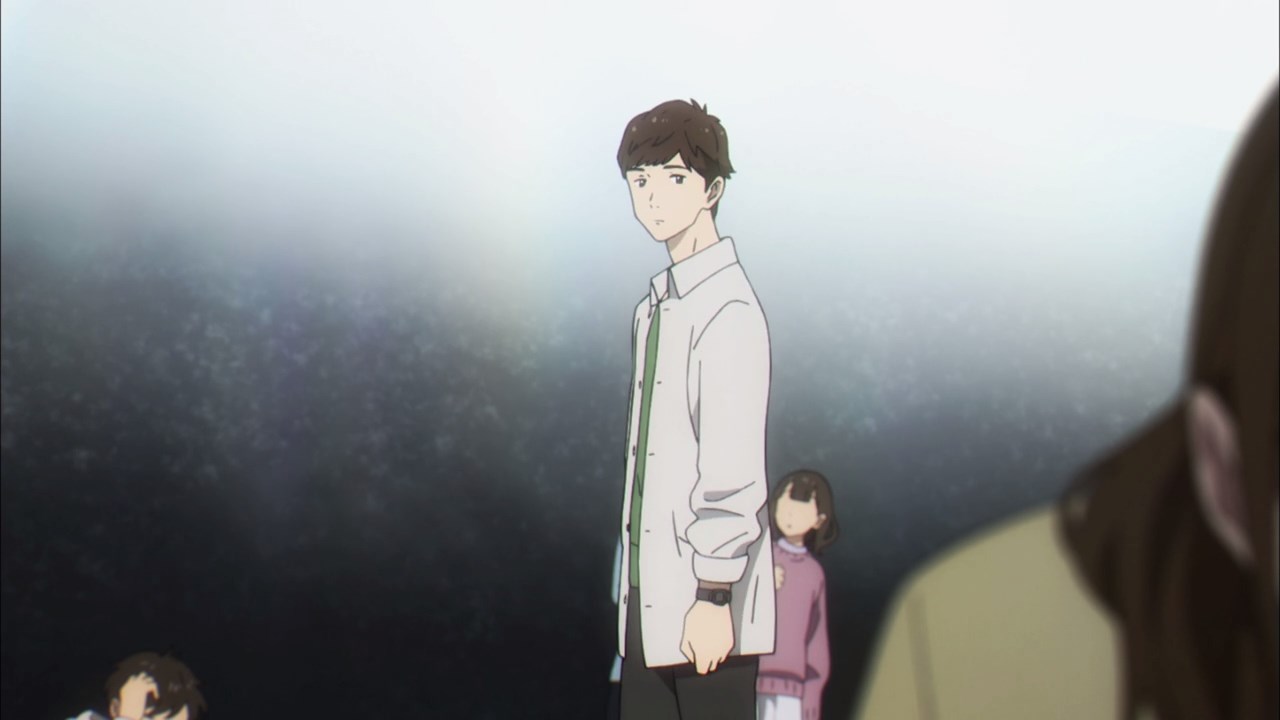 Anyways, here’s Keiji Takeda where he’s somewhat alive after being dragged by the King of Distortion inside the Moon Temple. The only thing that Keiji can do is to find Touka Miyashita. 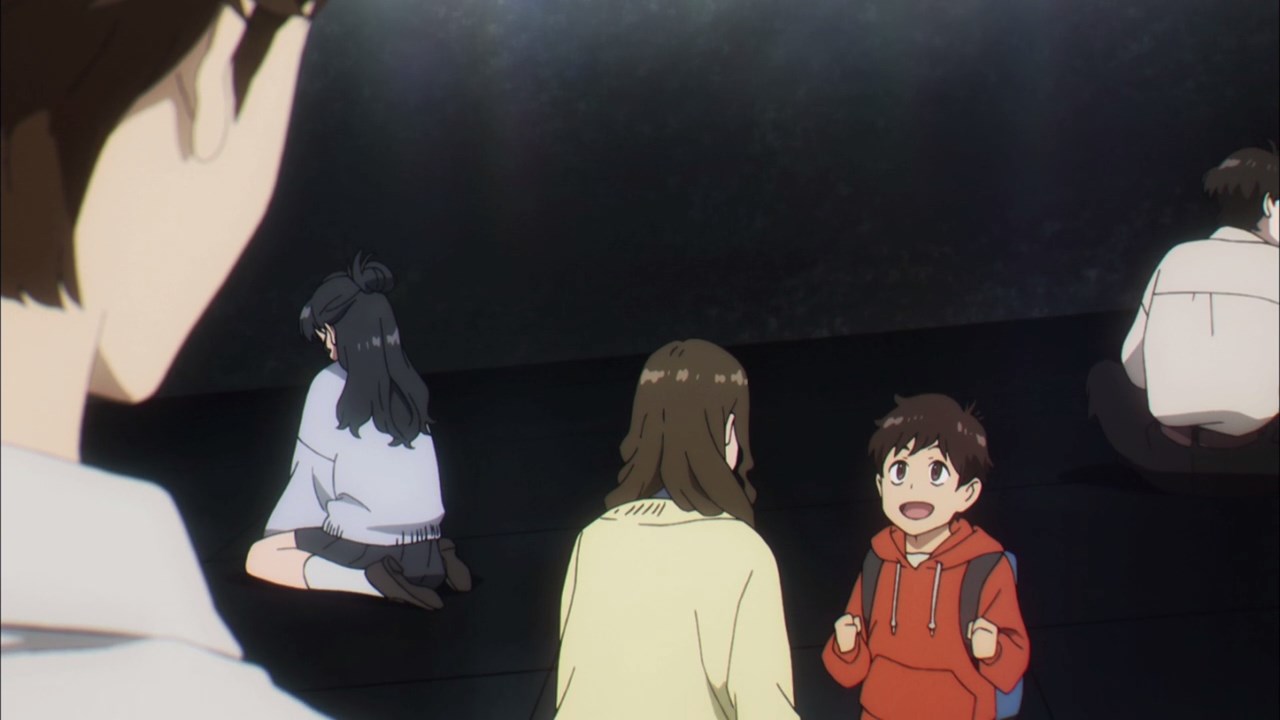 But still, it appears that everything is returning to normal where Shizuka and Makoto Hashizaka are reunited, although only a few people will remember the King of Distortion as most of them will forget about him. 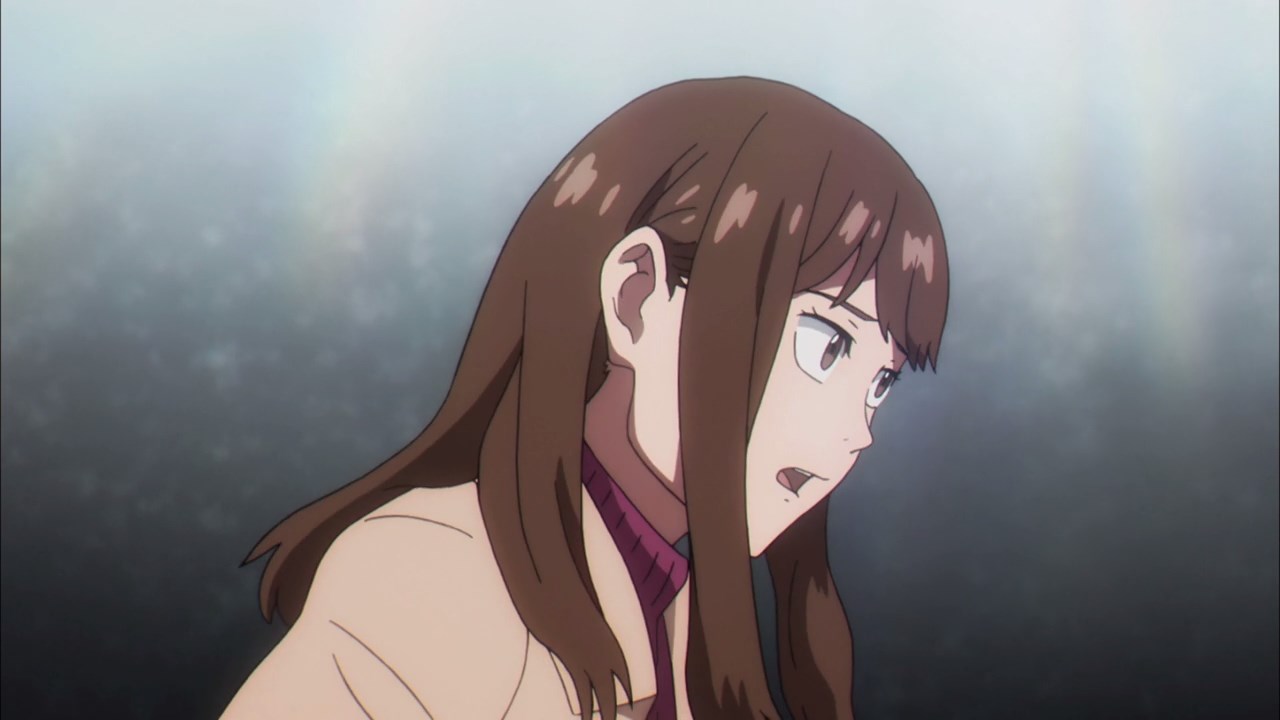 Meanwhile, here’s Sakiko Michimoto where she saw Boogiepop and asked if the grim reaper will return someday. 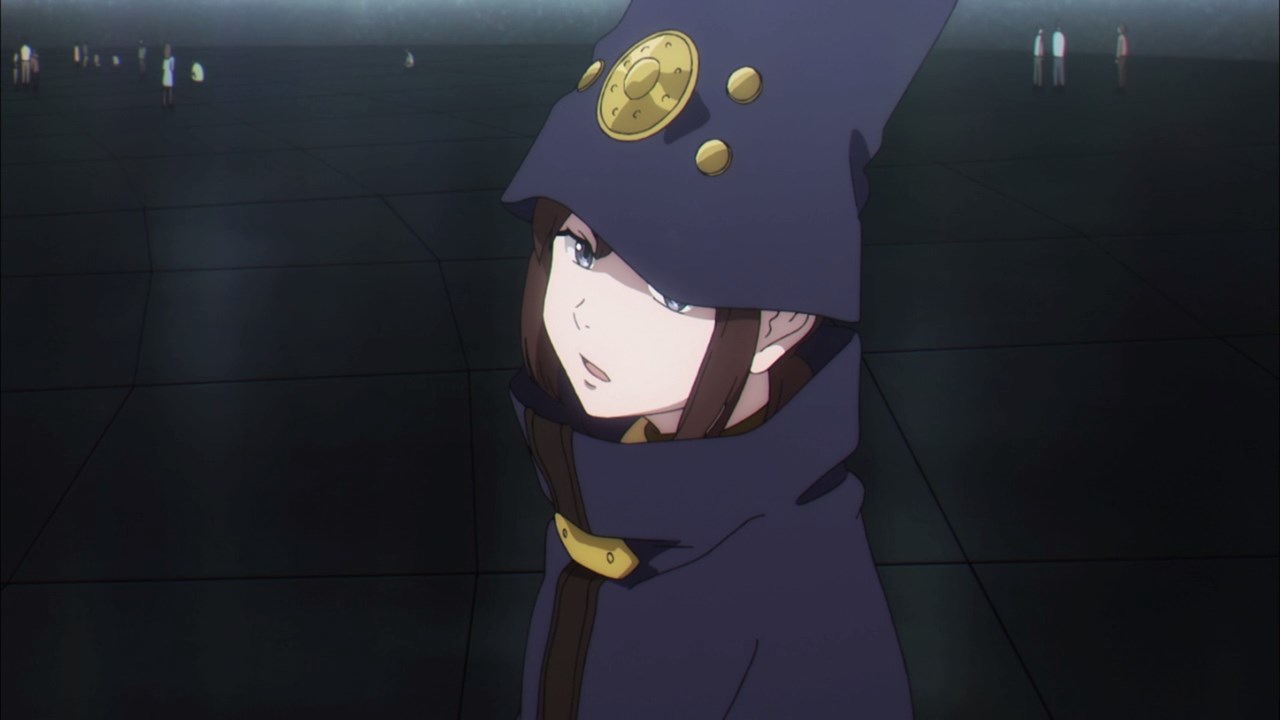 Of course, Boogiepop told Sakiko that there’s no time nor place for the grim reaper to reappear in front of her. Then again, Boogiepop will return if Michimoto becomes the enemy of the world. 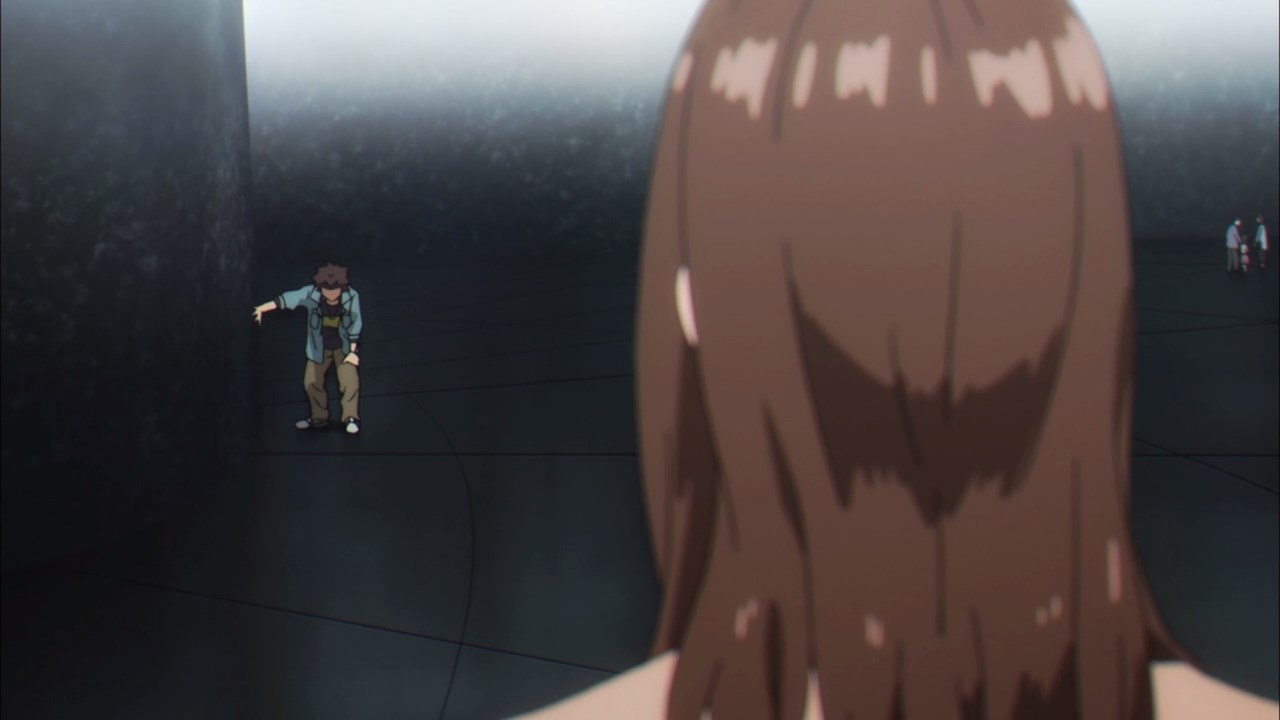 For now, Sakiko’s life will return to normal as she’s reunited with her male companion. 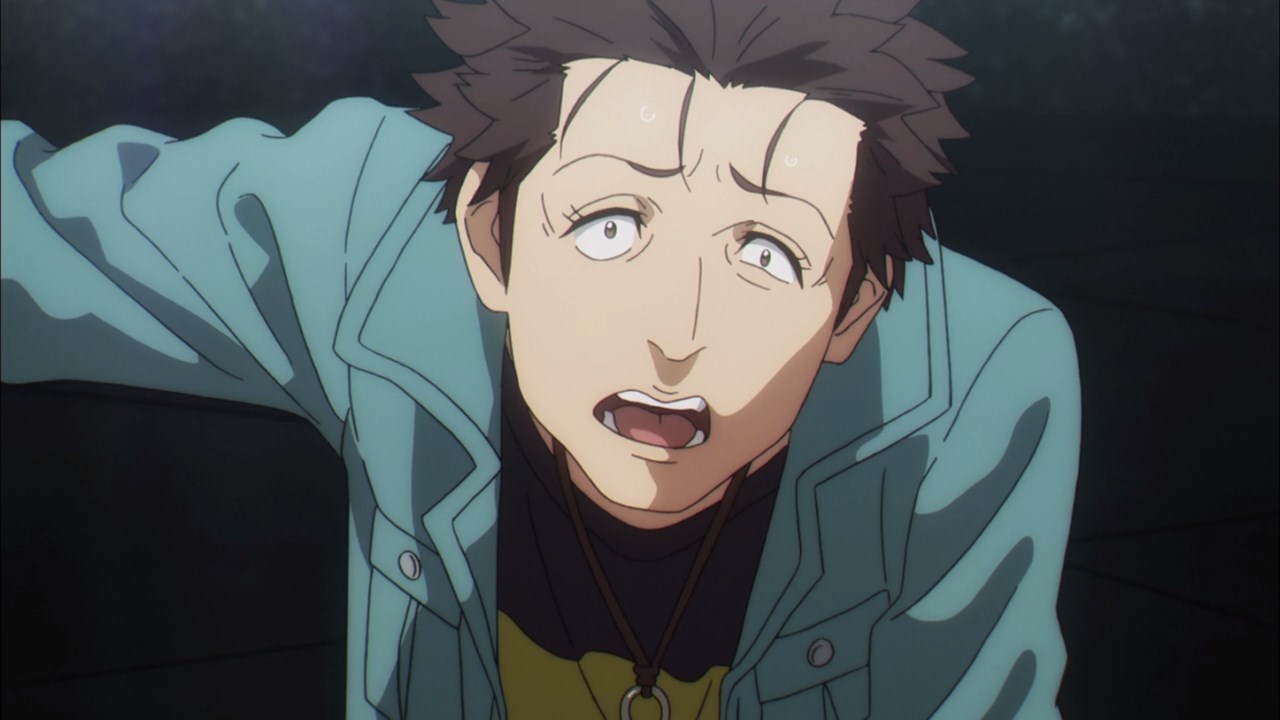 But seriously, I wonder what happened to him when he got separated from Sakiko Michimoto? Did he saw the King of Distortion, or he just fall asleep much like the others? 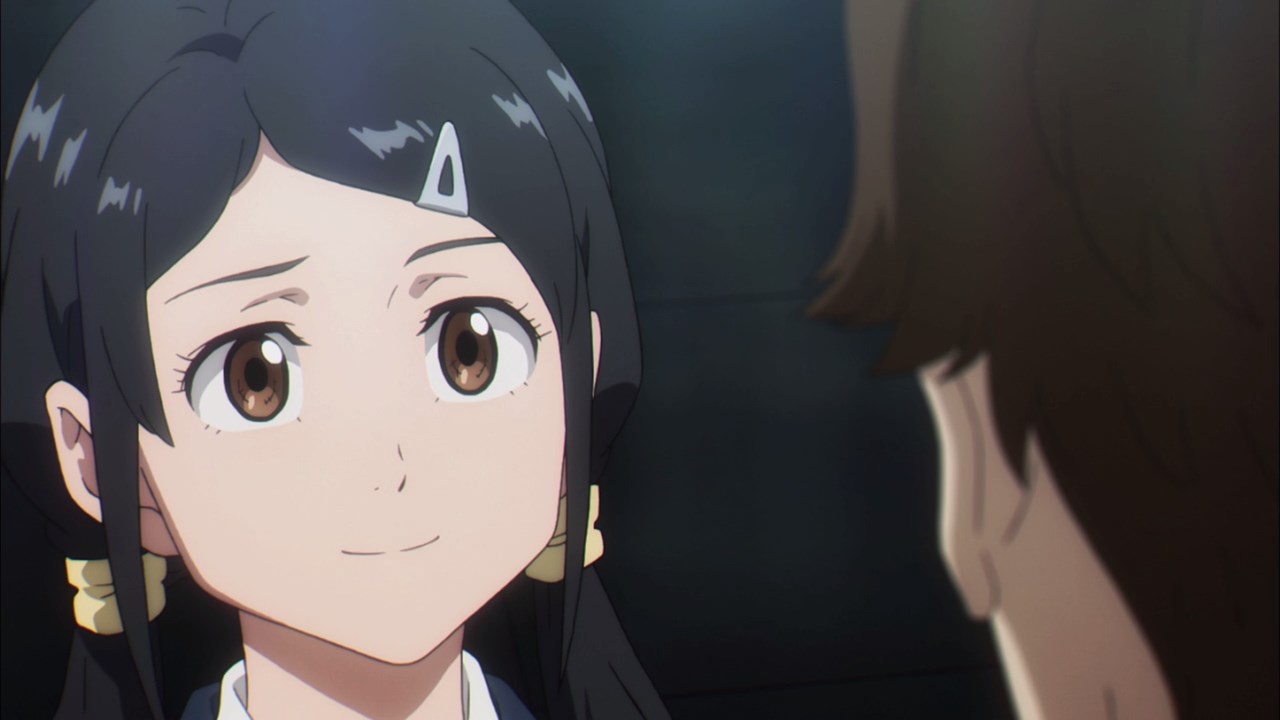 Also, here’s Kei Niitoki as she found Keiji Takeda at the ground floor. While she has a crush on Keiji, let’s say that they remained friends. 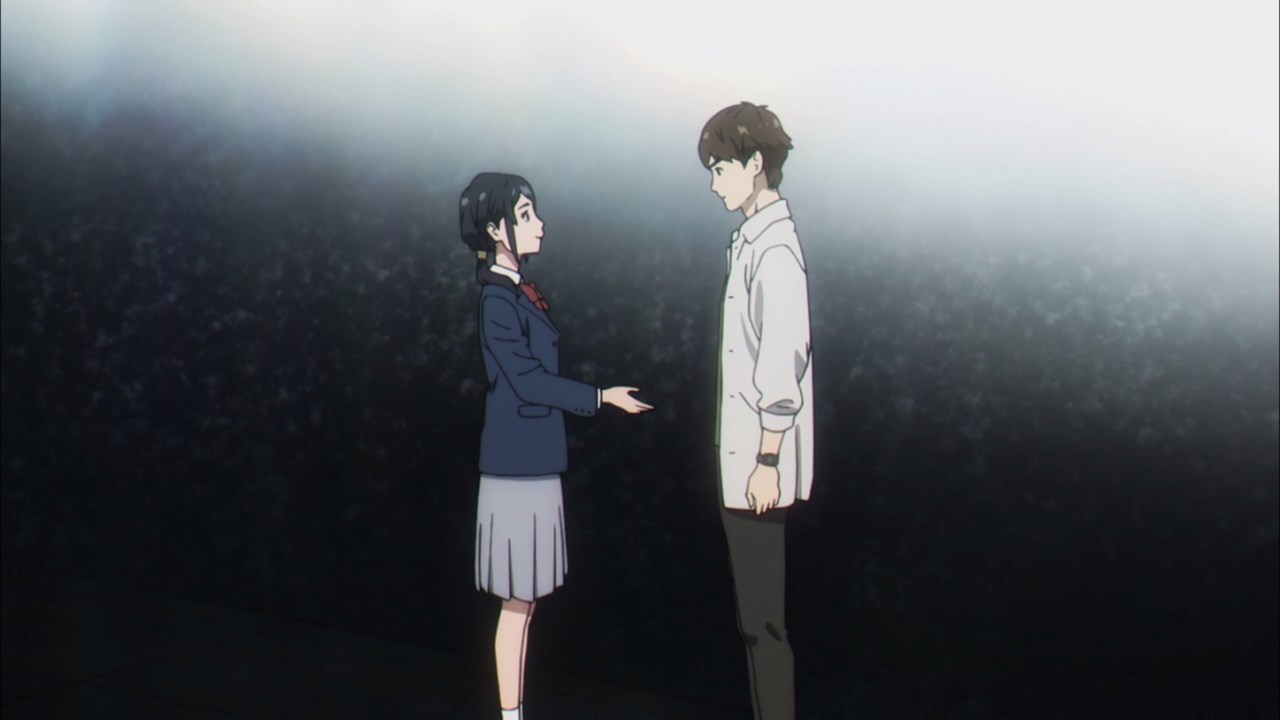 I mean, Niitoki is offering him a handshake rather than a hug. All I can say is that she finally accepts that Takeda chose Miyashita as his girlfriend and there’s no need to feel jealous towards her. 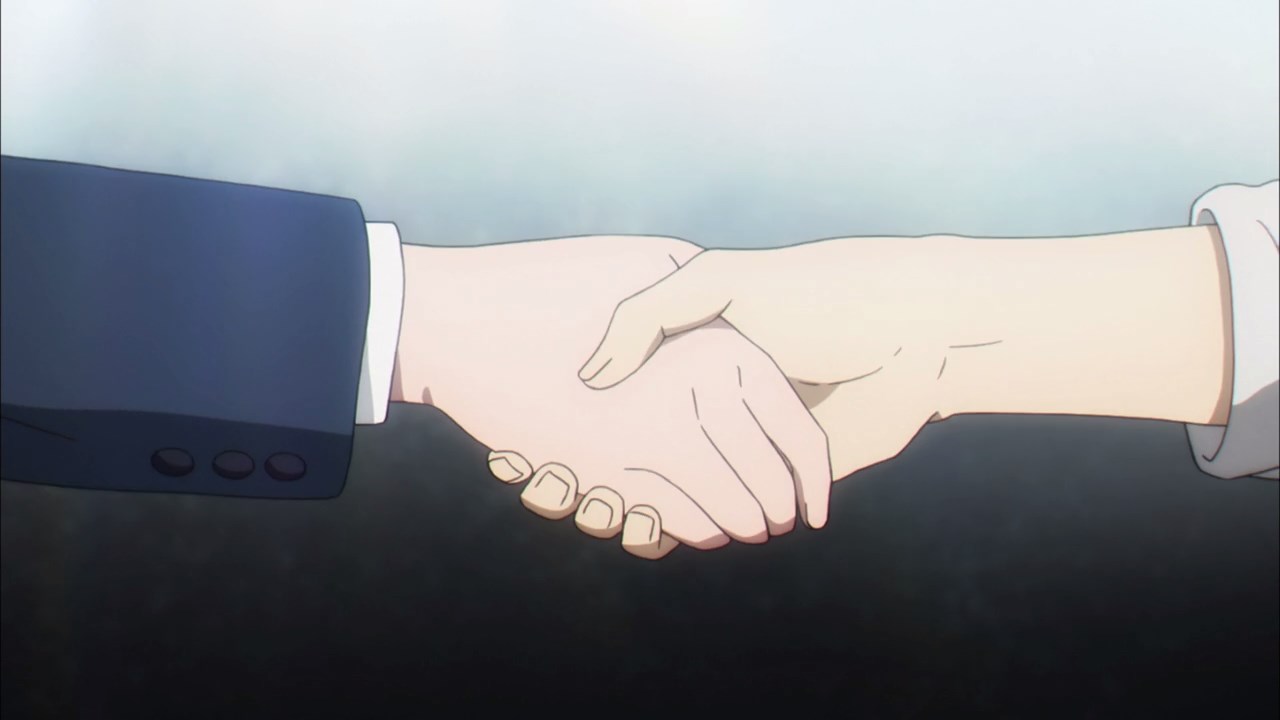 Well, I guess it’s all’s well that ends well on this final story arc for this TV series. But wait, we’re forgetting something… 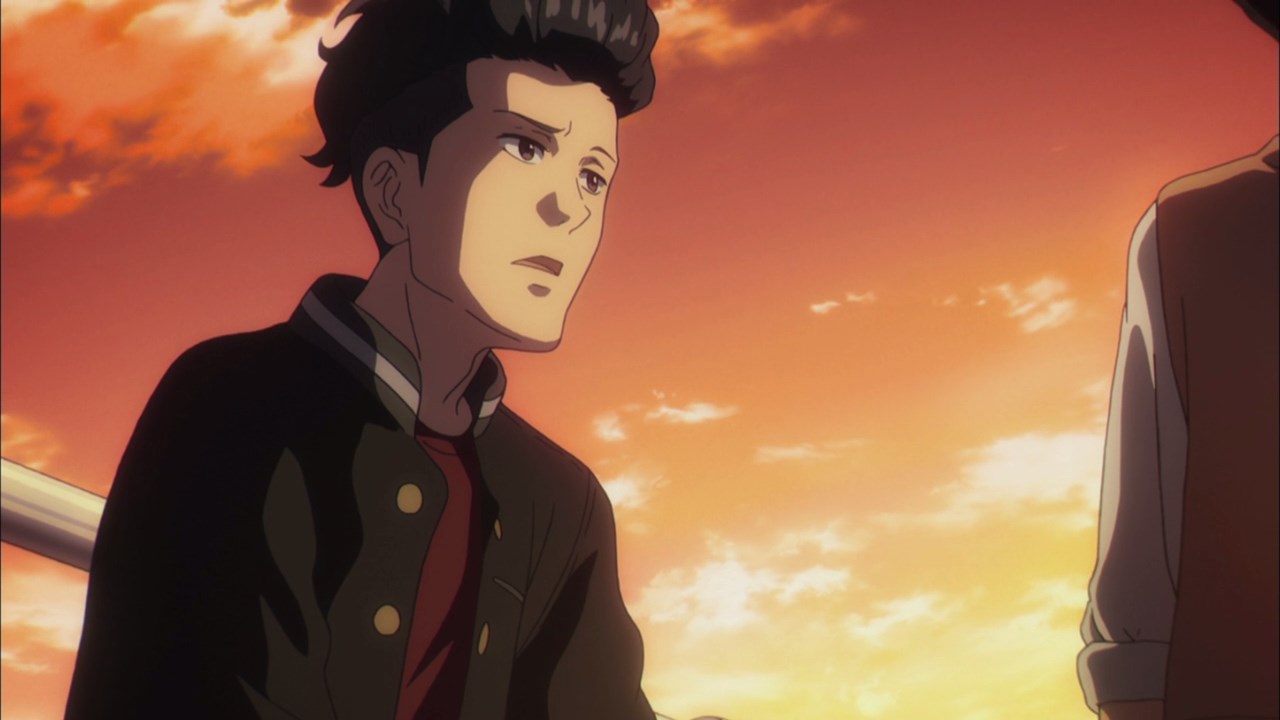 Oh yeah, I forgot about Kentarou Habara as he’s alive after disappearing for a while. Of course, he’s concerned about the aftermath of the Moon Temple crisis since most of them don’t know that Kyouichiro Teratsuki was killed by the Towa Organization.

Then again, the truth regarding the Moon Temple and Kyouichiro Teratsuki’s mysterious death won’t be made public anyway since the Towa Organization might cover it up. 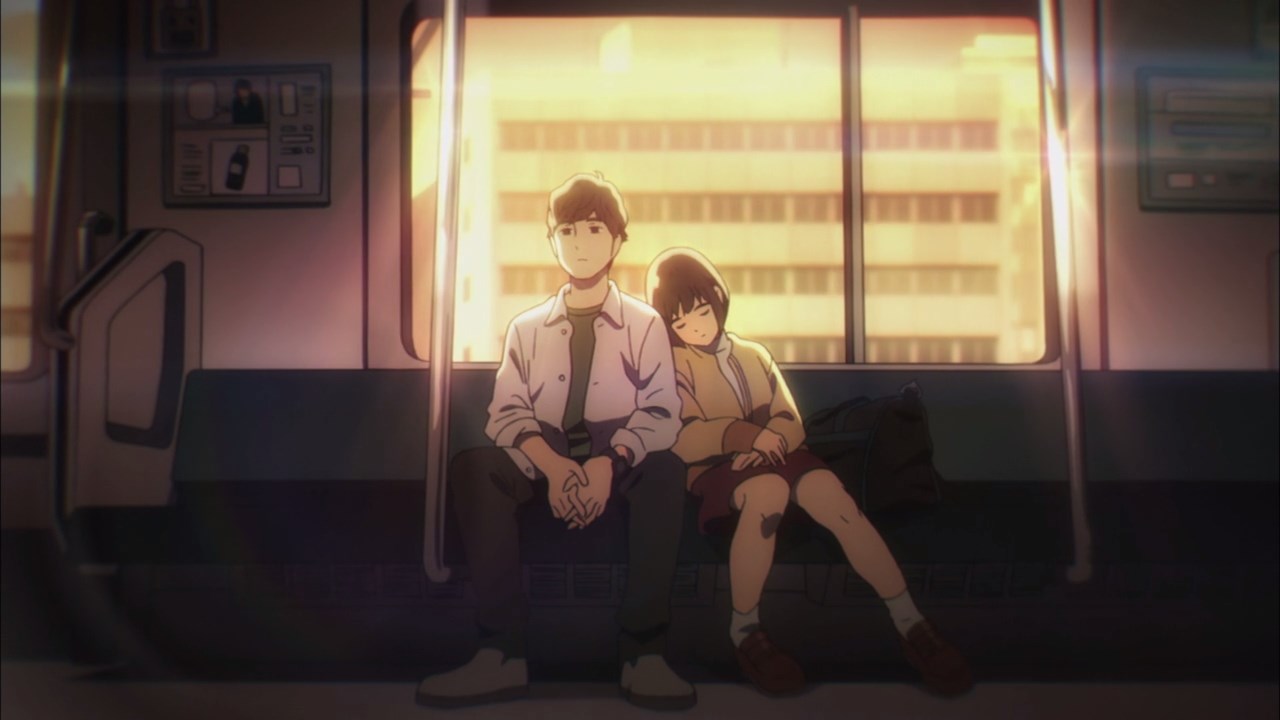 And so, everyone goes home safely including both Keiji Takeda and Touka Miyashita. And that my friend is the end of Boogiepop Doesn’t Laugh.

But seriously, the last story arc for this TV series puts me the edge of my seat, especially where hundreds of people are trapped inside the Moon Temple and confront the King of Distortion as they fall asleep. Still, it’s surprising to think that it was Shirou Tanaka who inexplicably created the King of Distortion from his own doubts in regards to Naoko Kamikishiro’s feelings, rather than Kyouichiro Teratsuki in which he created the Moon Temple as an experiment to know the psyche of every attendee.

Fortunately, there are no casualties (except for Teratsuki) during the final story arc, which is a good thing since I’m worried that the Moon Temple crisis will end in tragedy once the building collapses. Not only that, but it appears that Shirou Tanaka found some real closure after Kei Niitoki told him in regards to Naoko Kamikishiro’s true feelings. So yes, it’s a happy end for sure but the downside is that Towa Organization will remain as a threat and they got away with it by murdering Kyouichiro. 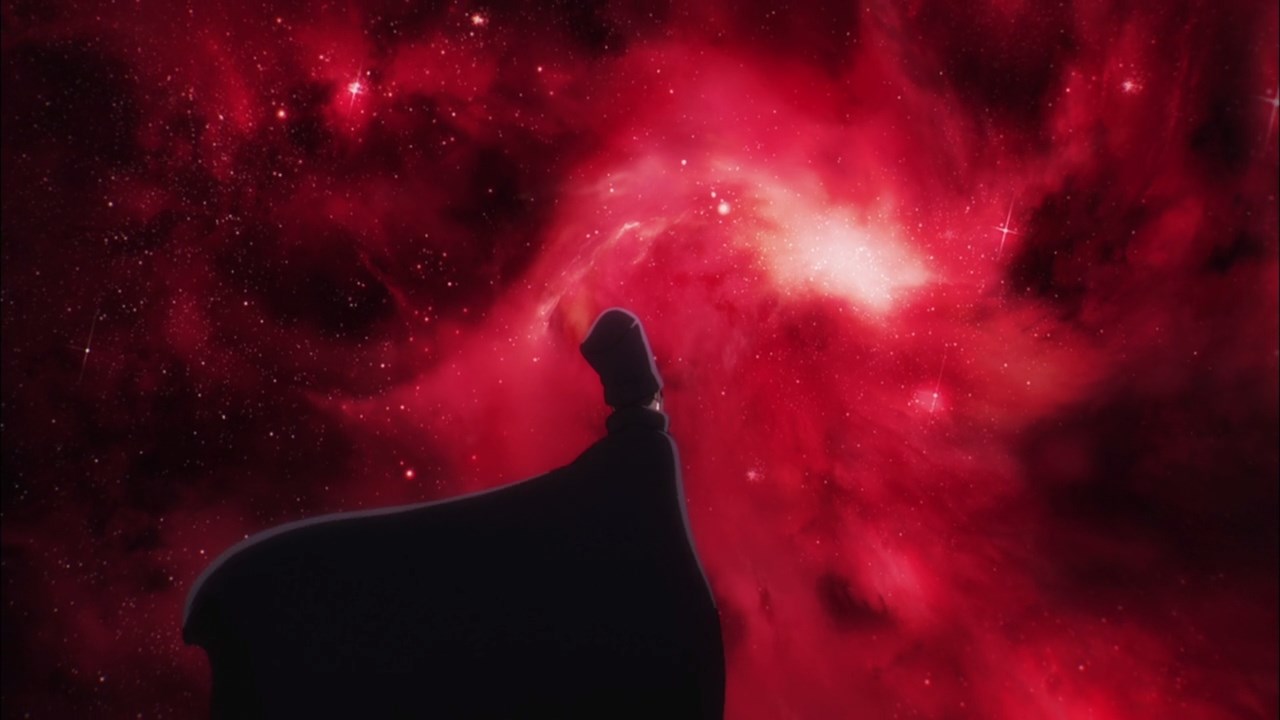 Still, I’m glad that Madhouse decided to bring back this classic anime series and tell the story properly, so kudos to them for bringing the Boogiepop series to the modern audience. Of course, I really wish Boogiepop Doesn’t Laugh will have a sequel along with Kino’s Journey because it’s so damn good that it needs more love and attention.

Anyways, I’m done watching this series as I end this post with Boogiepop watching the red sky. Of course, Boogiepop will return should an enemy appears to turn the world upside-down.