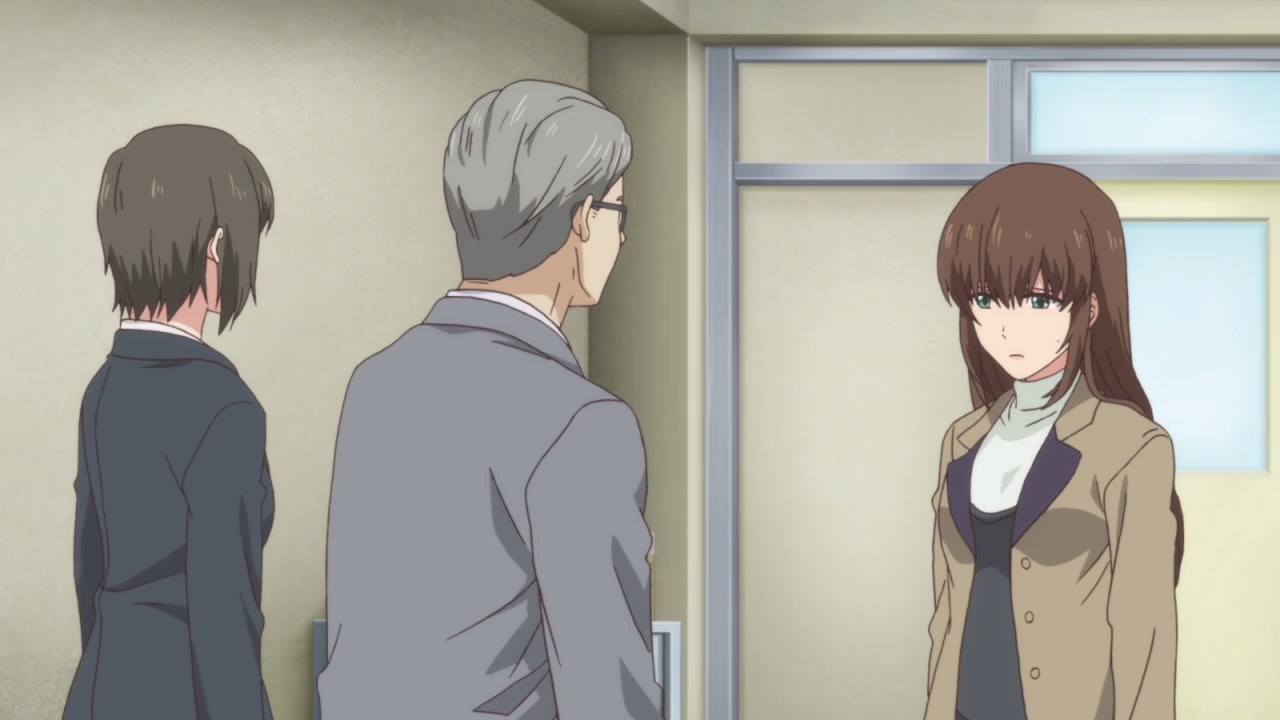 Hey everyone, it appears that Hina Tachibana’s elicit relationship with a student has finally exposed that the faculty staff are very concerned about it. 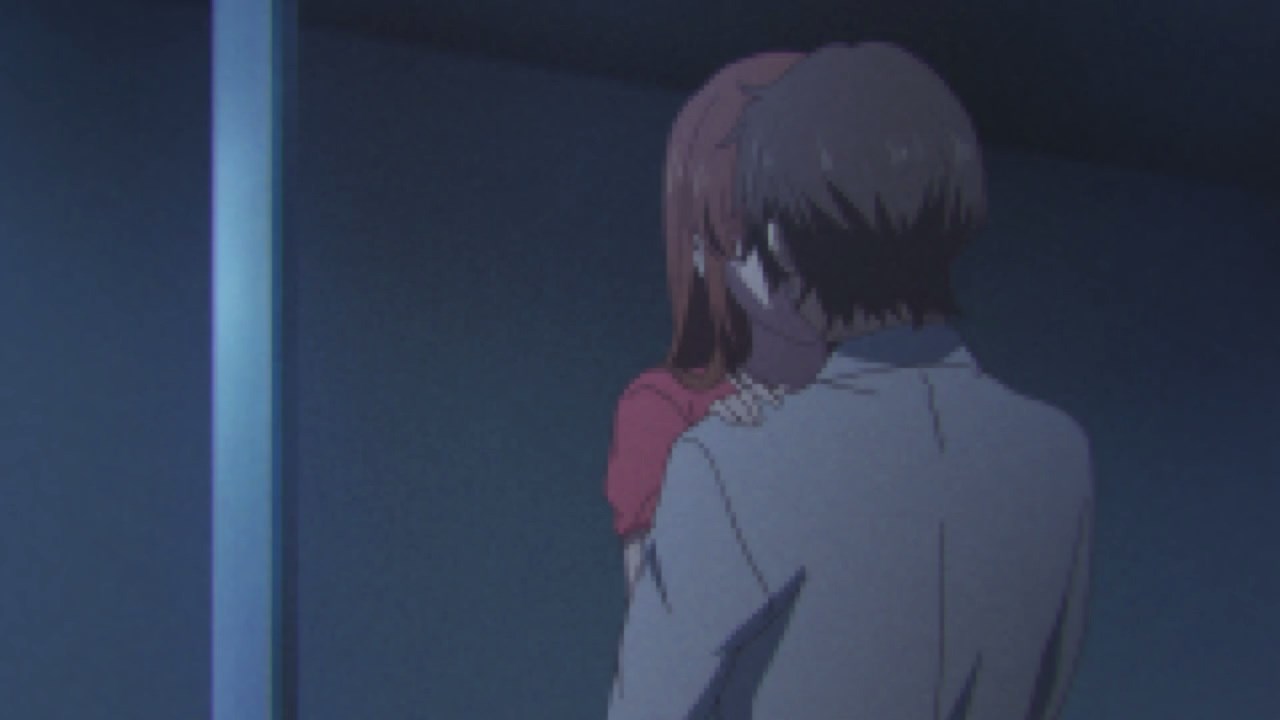 And it’s all because of this picture that was captured during the school trip at Okinawa. You know Hina, I think you should close the curtains if you want to have sex with Natsuo Fujii. But alas, you got exposed! 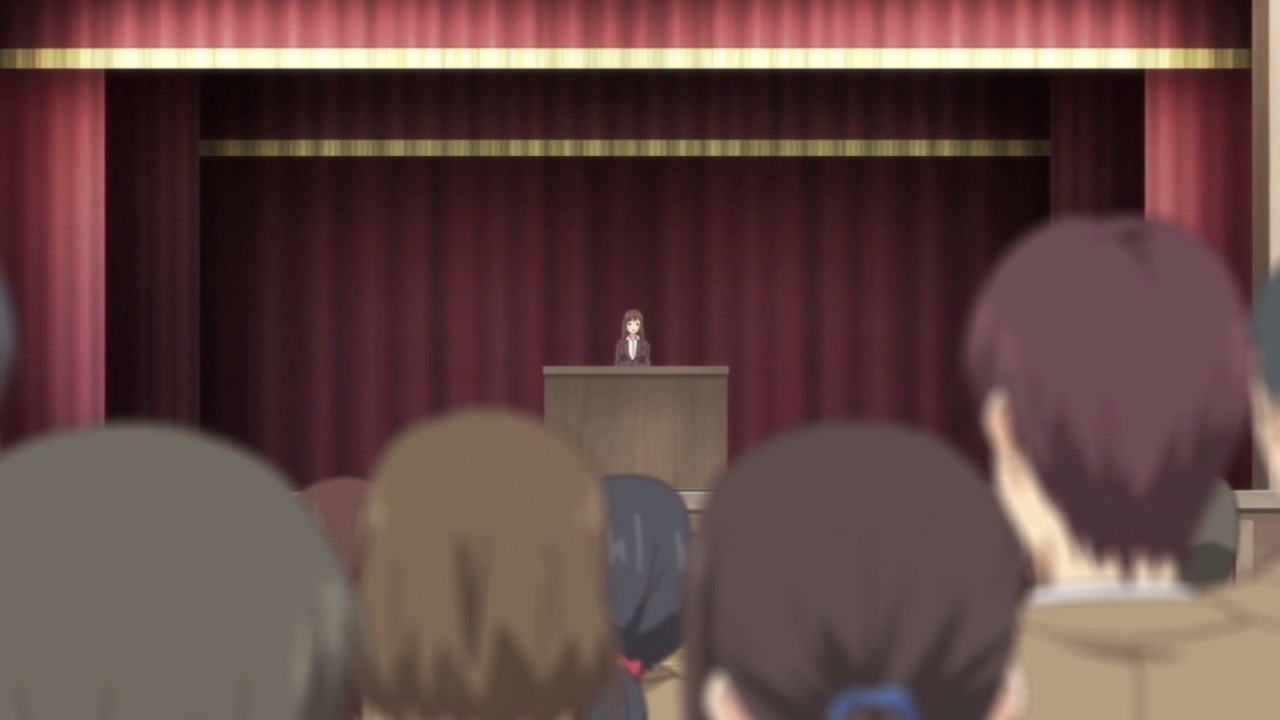 And so, Hina Tachibana declared in front of the students during the assembly that she’ll resign due to personal matters. Of course, everyone is shocked in regards to Tachibana-sensei’s sudden resignation. 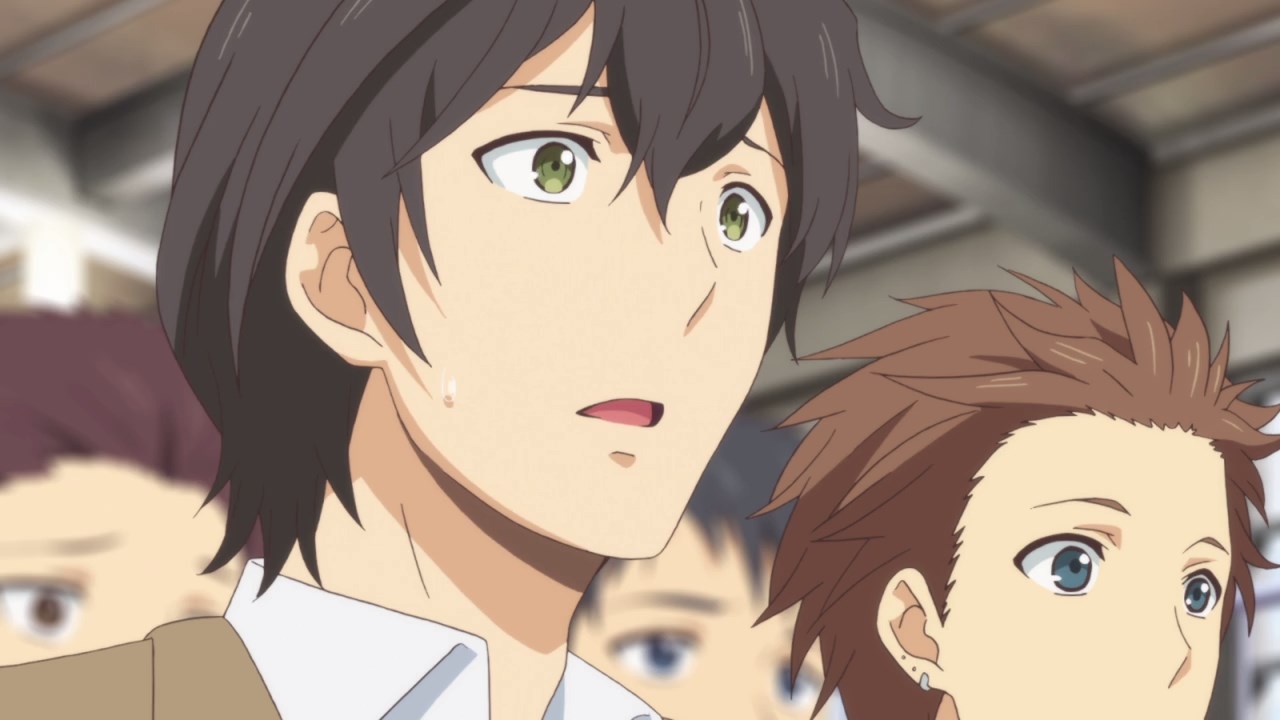 Of course, the reason why she wants to resign is because of Natsuo Fujii who he’s in love with Hina-nee. Then again, continuing their forbidden relationship would be bad for both of them, especially when it became public. 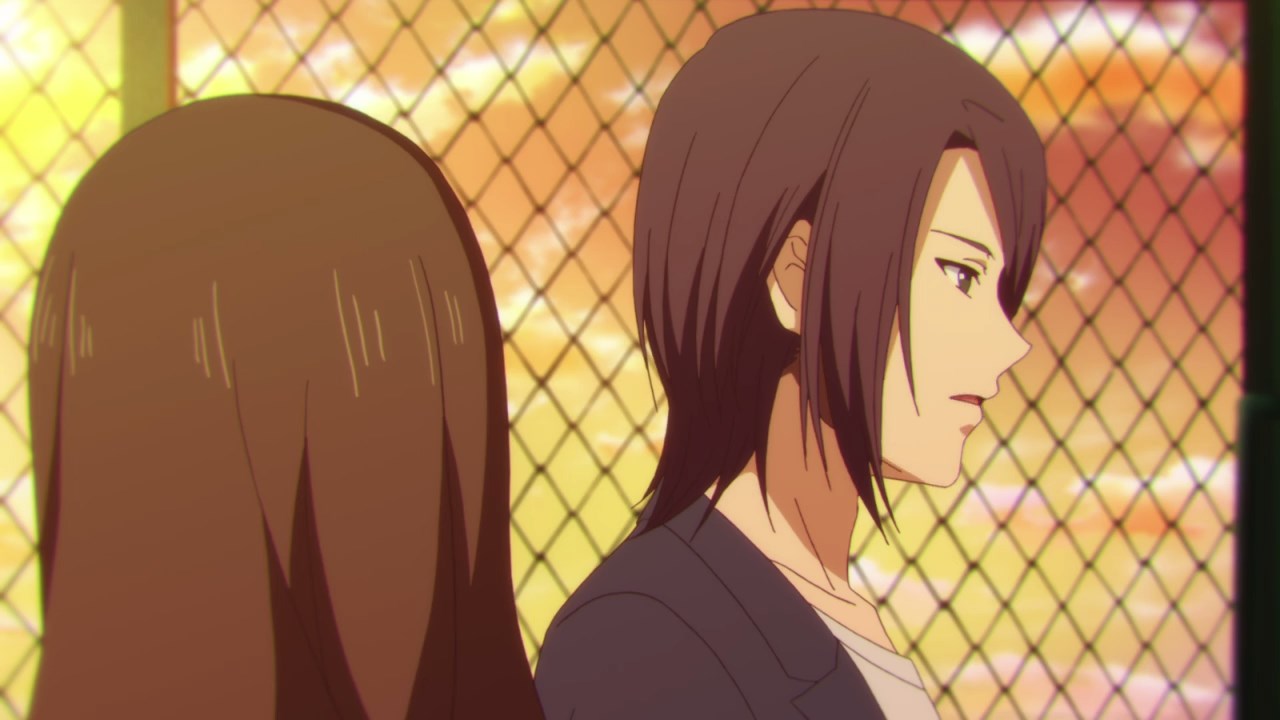 Even Reiji Kiriya is aware on Hina’s relationship with Natsuo because he knows about Fujii’s feelings through his novel. Oh, and let’s not forget that Hina Tachibana once had a relationship with Shuu Hagiwara. 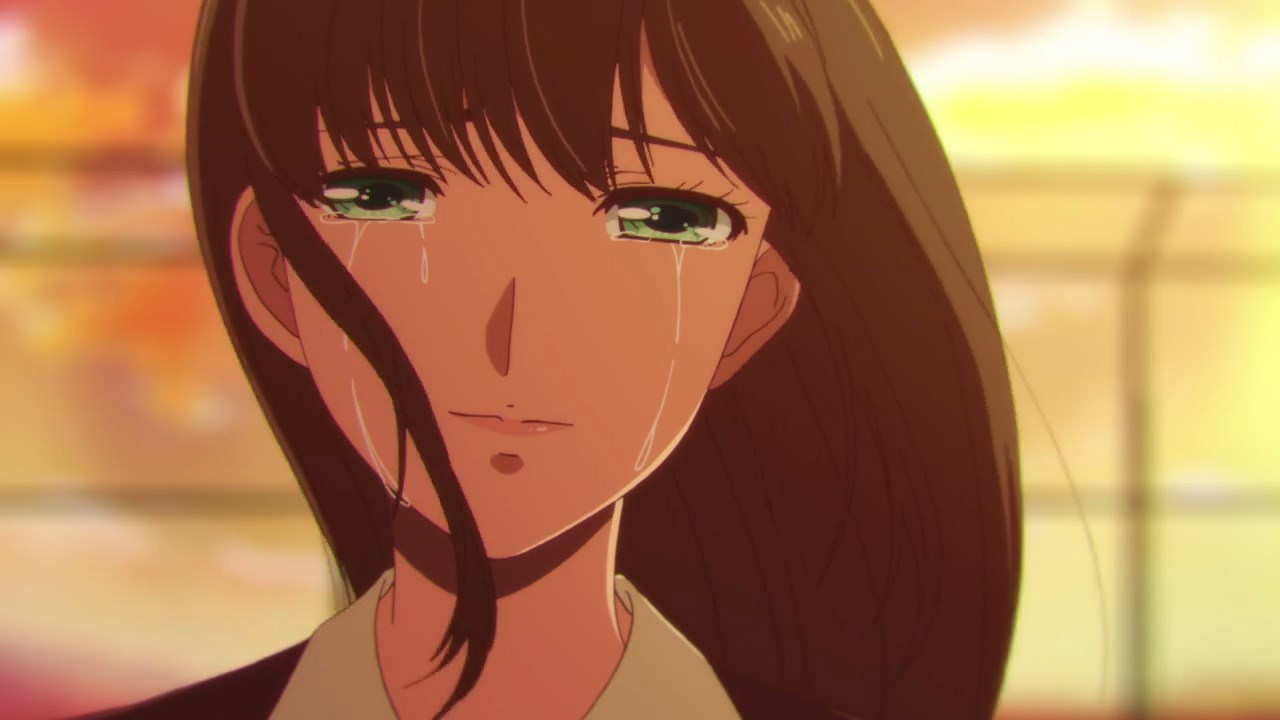 But in any case, Hina Tachibana will take responsibility for her actions by moving away from Natsuo Fujii. And despite her feelings towards Natsuo, Hina-nee won’t back down from her decision. 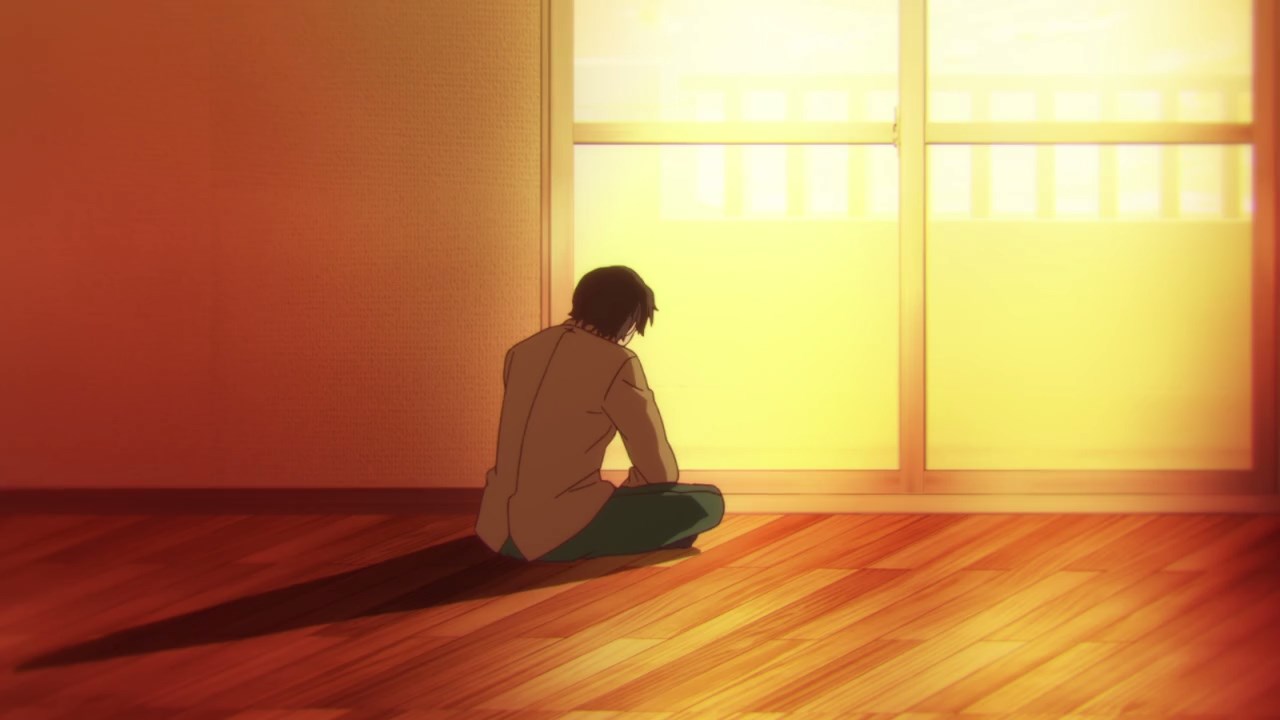 As for Natsuo Fujii, he’s full of distraught now that Hina Tachibana went away with only a letter telling Natsuo that she really loves him and bid farewell.

I have to say that his heart was in tatters now that Hina-nee is gone without a trace. Without Hina at his side, Natsuo can’t do anything. 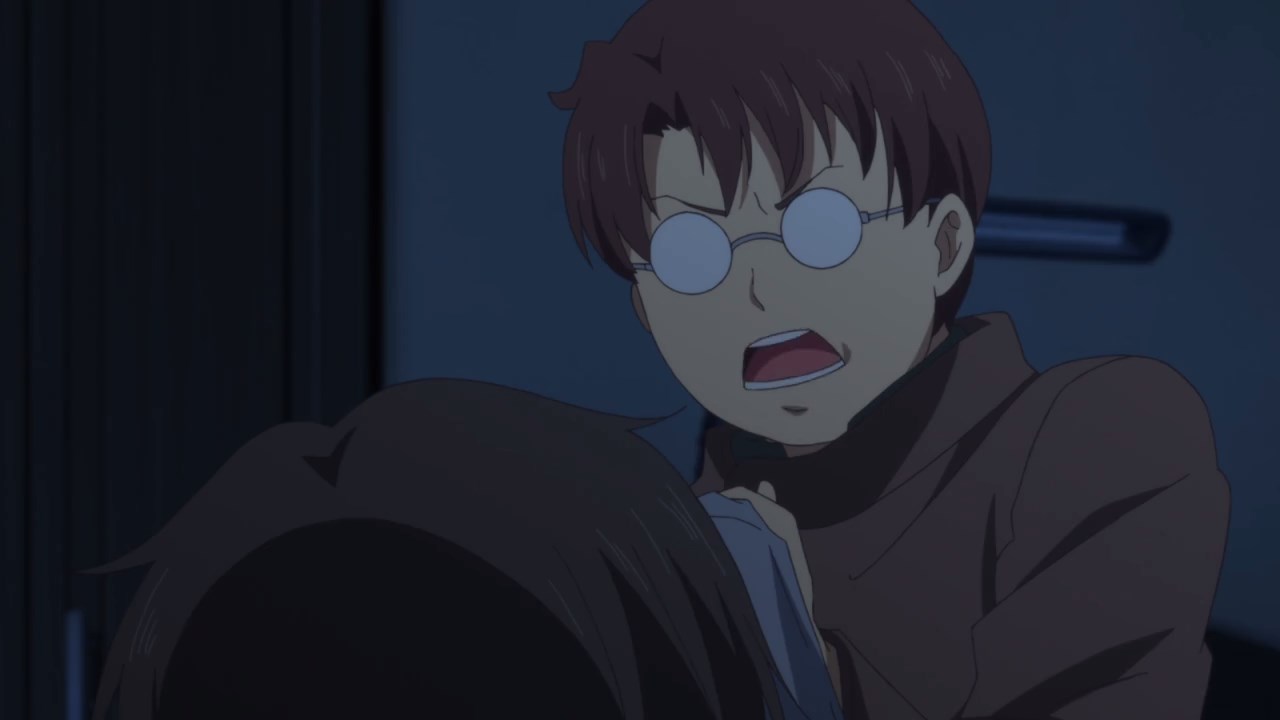 Evem his friend Fumiya Kurimoto calls him out for being pathetic without Hina Tachibana around. 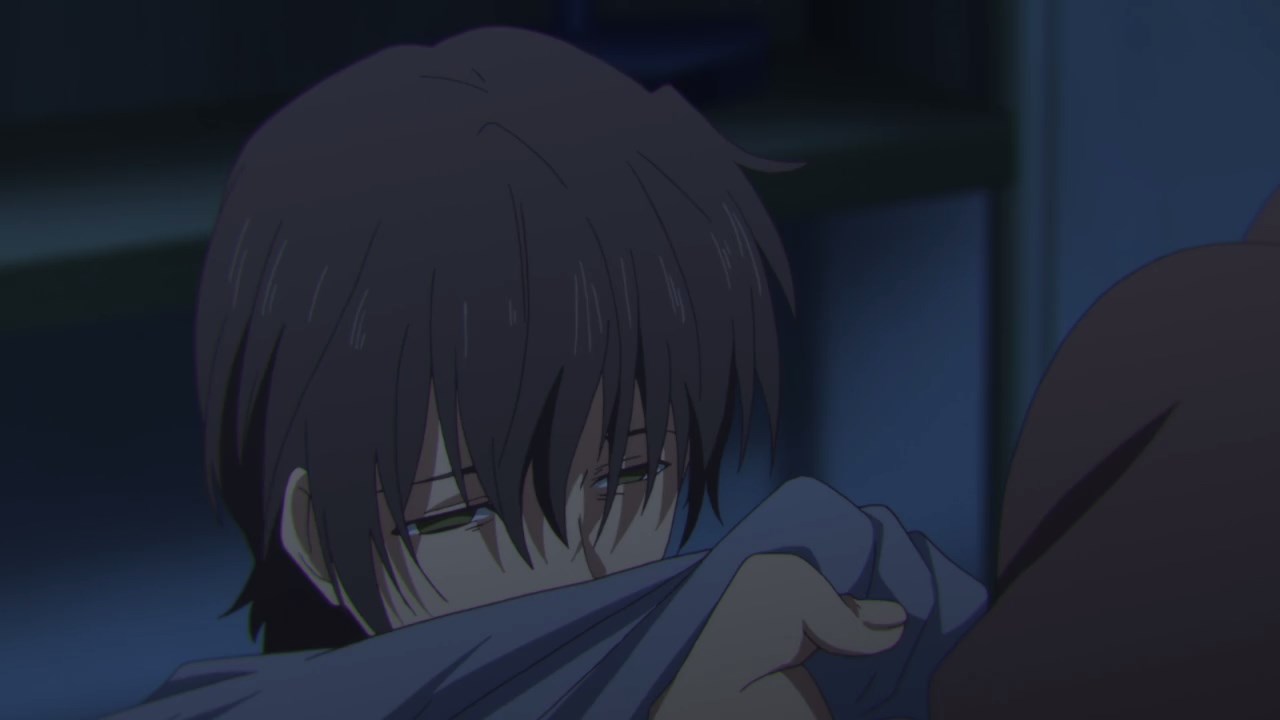 Unfortunately for Fumiya, it’ll take a long time for Natsuo to recover. Sorry Fumiya, but it’s not easy for Natsuo to just come back after a big break-up from Hina-sensei. 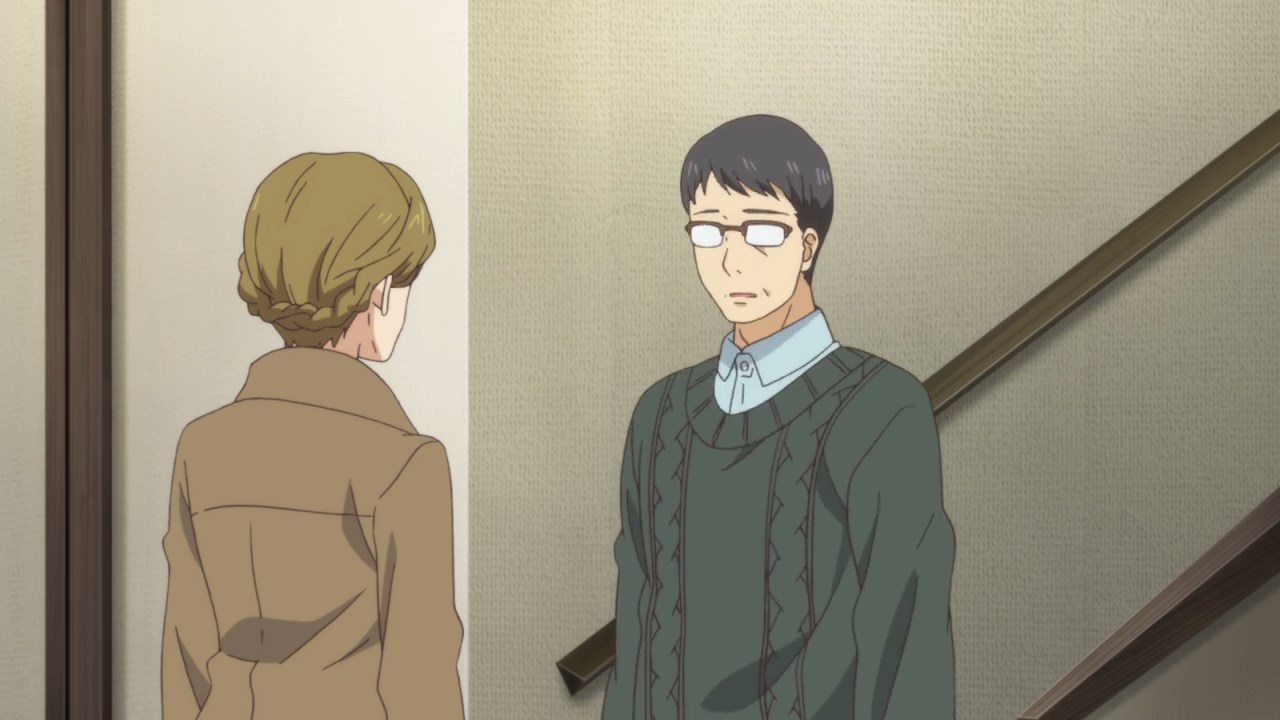 Oh and it’s not just Fumiya, but his whole family are worried about him as Akihito Fujii and Tokiko Tachibana are surprised that Natsuo and Hina had an intimate relationship with each other.

Now, they’re questioning on whether their marriage was a bad idea. Um you two, there’s no need to file a divorce just because Natsuo is in love with Hina-nee. 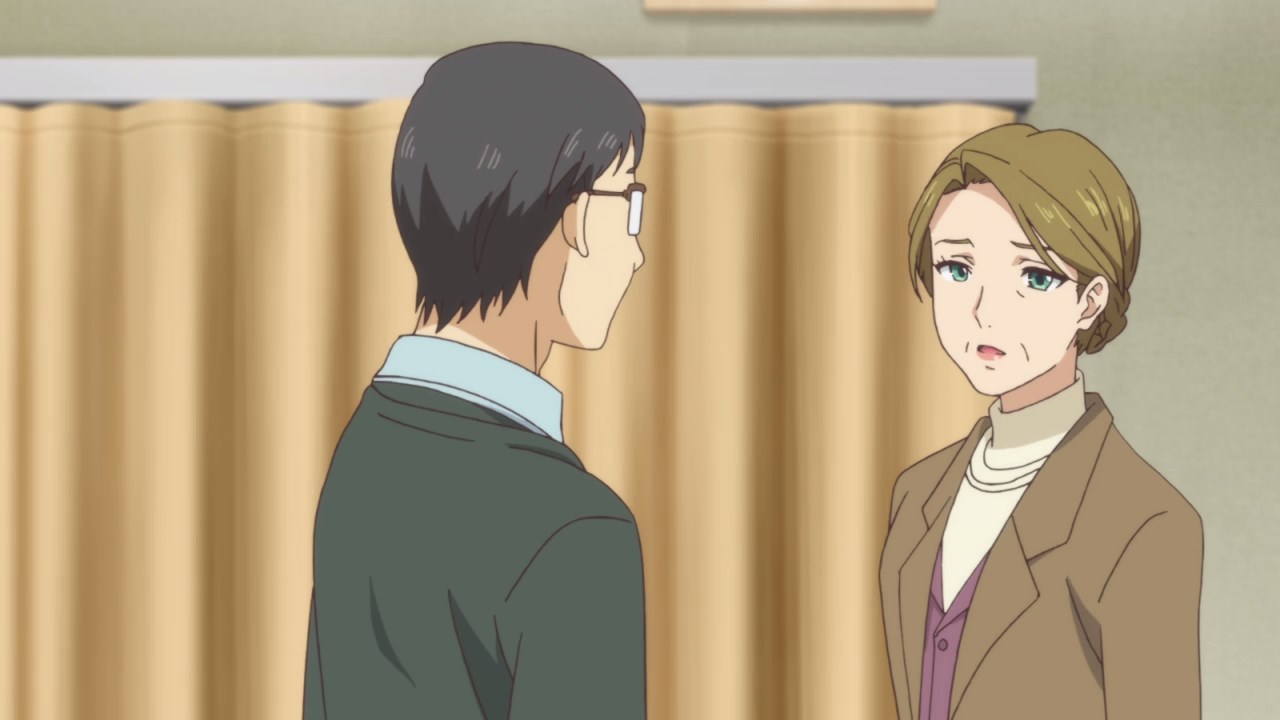 And speaking of Hina Tachibana, Tokiko told Akihito that Hina is doing fine as she’s working in another school somewhere.

Of course, they can’t tell Natsuo nor Rui regarding Hina’s whereabouts. But you know what, I think they should keep it that way because Hina wants to be an independent woman and besides, she doesn’t want to go back to the past. 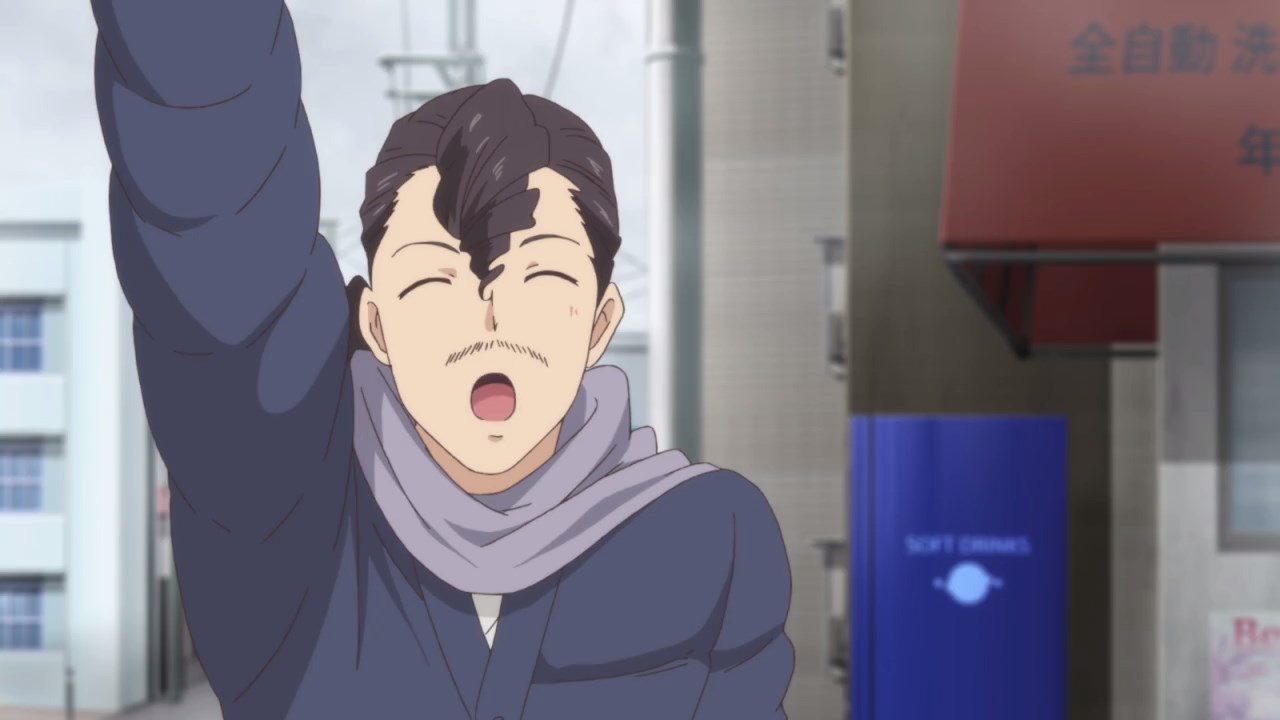 Now then, let’s move onto the next scene where Masa- I mean Mari Komori is inviting Natsuo Fuuji for some activity since Natsuo is feeling down. 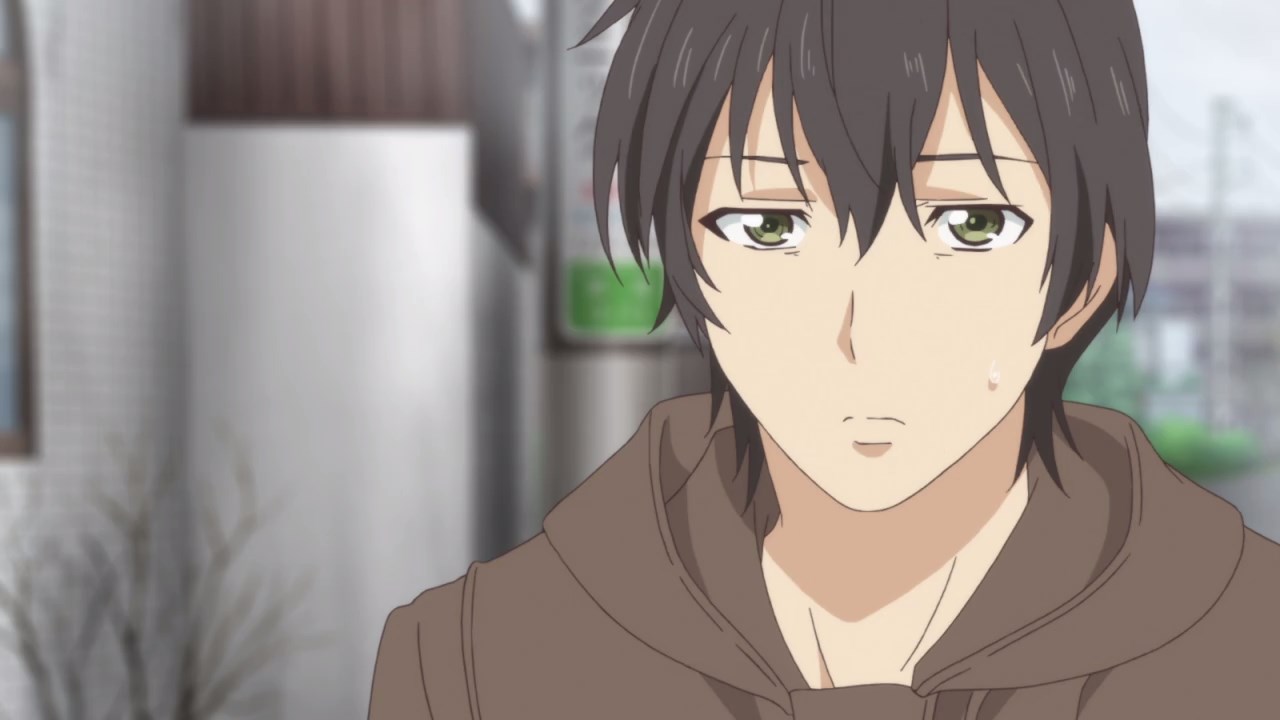 Oh and not only that, but Natsuo needs some fresh air since he cooped up in his room for a very long time. Anyways, it’s time for Natsuo and Mari-chan…

…to take a bath together at a public bathhouse. Oh yeah, seems that Mari Komori forgot to tell Natsuo Fujii that he was a former yakuza member. Well, the former heir to a notorious yakuza gang.

Anyways, after he left his family because of his homosexuality, Masaki Kobayashi found out that his father passed away due to cancer. And it’s unfortunate that Masaki can’t pay his respects to his father now that he was disowned. Still, I wonder if he finally confessed his true feelings towards Jin Katsuragi now that Masaki Kobayashi is free. Then again, I doubt that he found a happy ending.

With that said, Masaki or should I say Mari Komori told Natsuo Fujii that he can never go back to the past and undo things that already happened. And you know what, that hit Natsuo pretty hard since he made mistakes in his life that all he could do is to shoulder all the pain for as long as he’s living in the present. 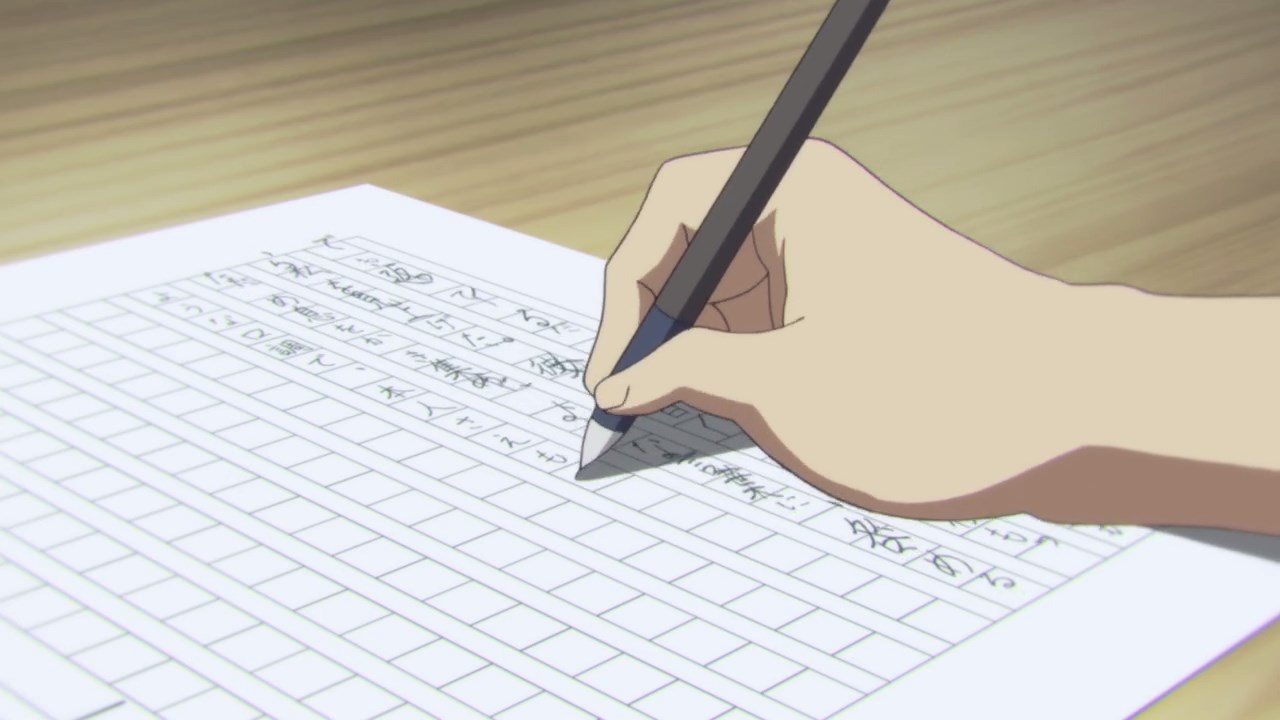 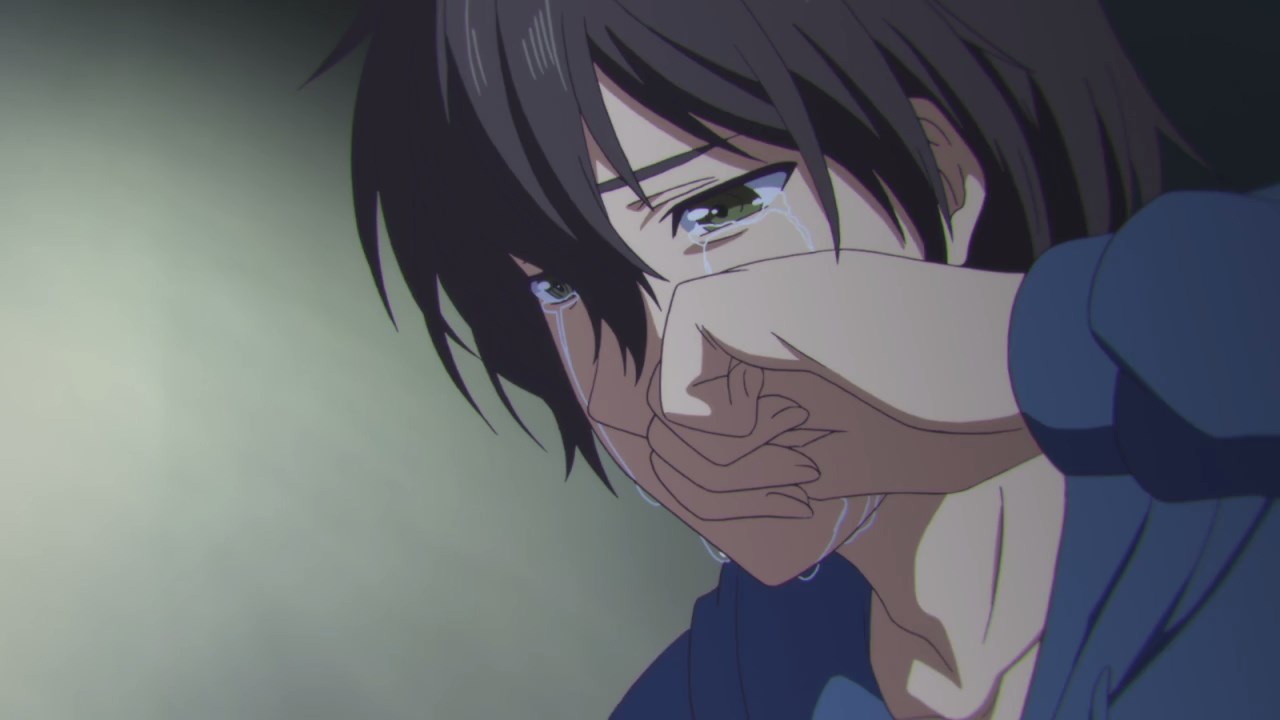 But thanks to Mari Komori’s words, it seems that Natsuo Fujii pours all of his painful experience through writing until he finally finished his manuscript.

Well, glad that Natsuo finally found a way to move forward in his life instead of hopelessly searching for Hina-nee, ’cause there’s no closure if he did that. 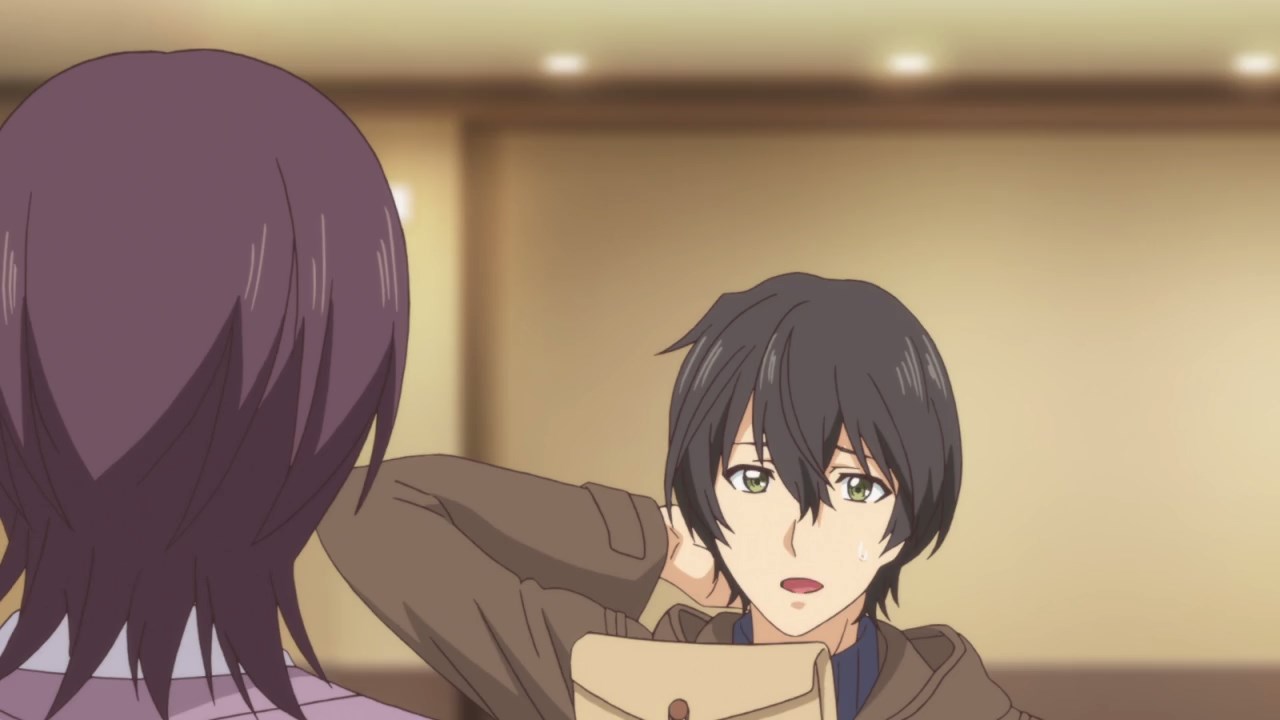 Afterwards, Natsuo gave his finished manuscript to Kiriya-sensei on New Year’s Day for evaluation. I mean, he has the final say if Natsuo’s novel is good to read or not. 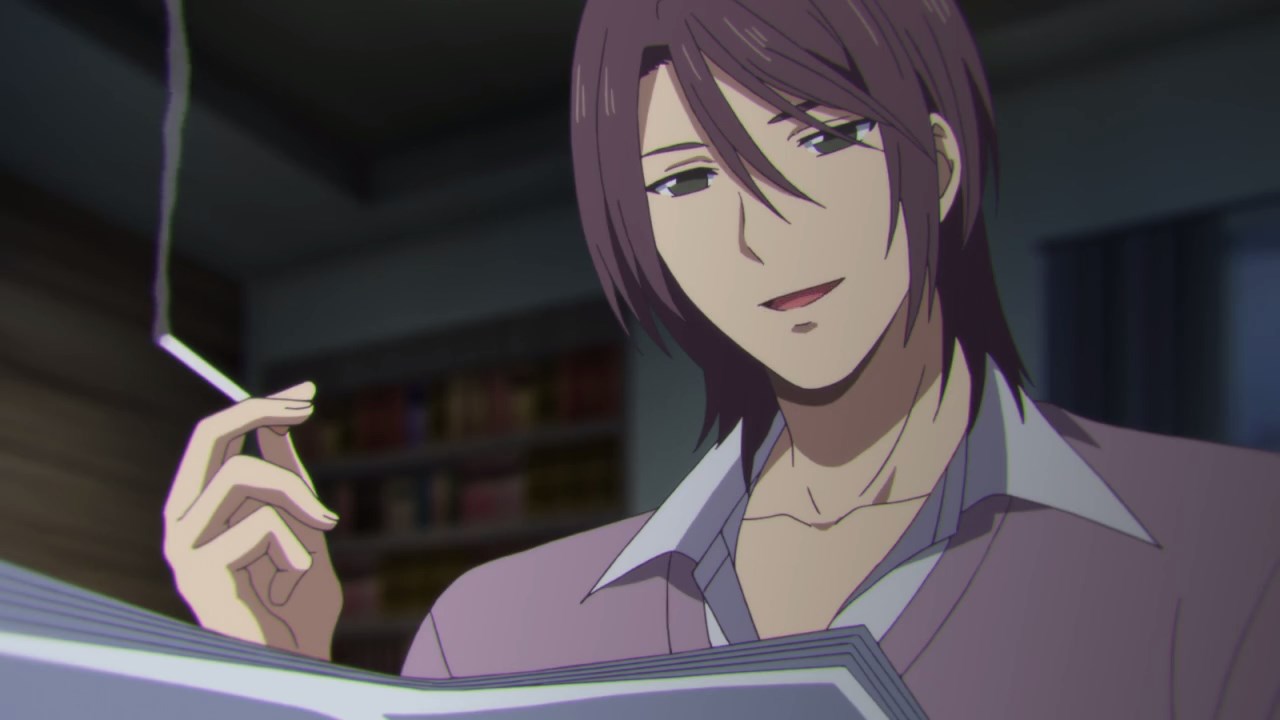 But after he read the entire manuscript, Reiji Kiriya was surprised to see Natsuo Fujii made a stunning novel that he secretly submitted Natsuo’s manuscript to the 77th Shinkosha Literary Art novel contest in the Amateur Division. 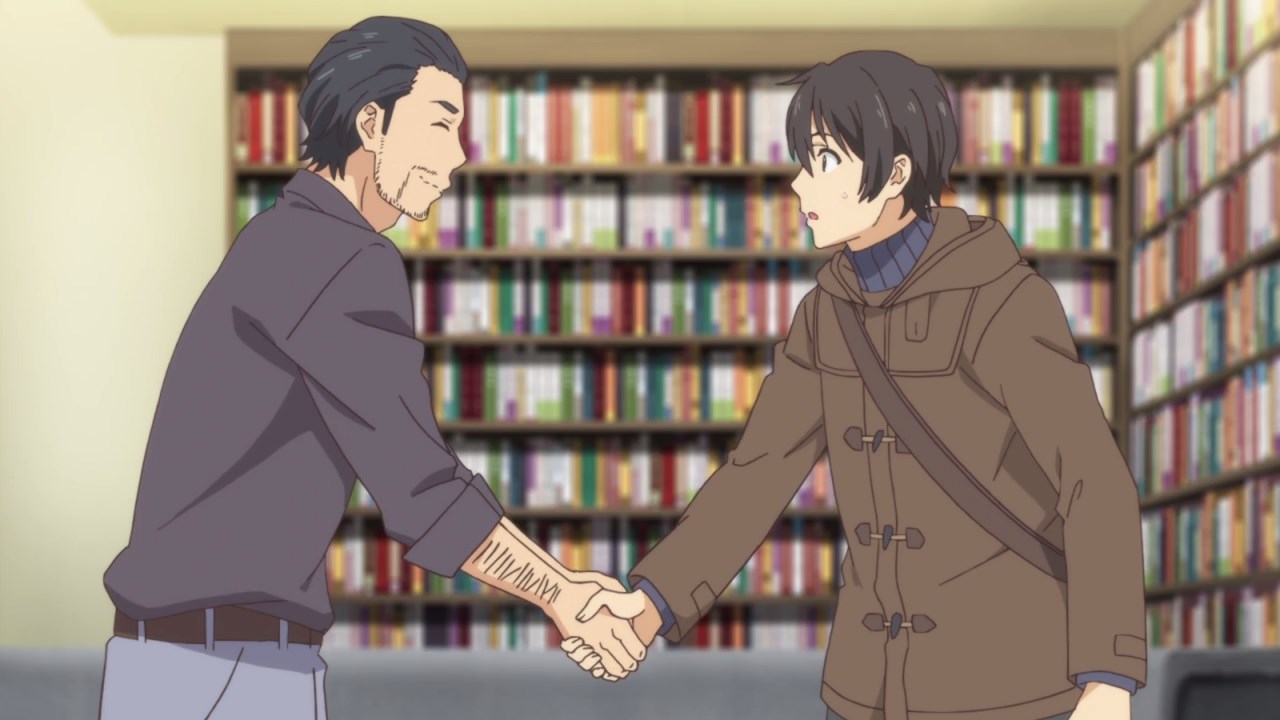 And after a few days, Natsuo Fujii was called by Reiji Kiriya where he’ll meet this guy named Soichiro Tsutaya, a staff member of Shinkosha’s Literary Department.

Oh and the reason why Kiriya-sensei called Fujii is because he won first place in the Amateur Division for his novel “Well, See You.”, which Natsuo was surprised that he won an award. 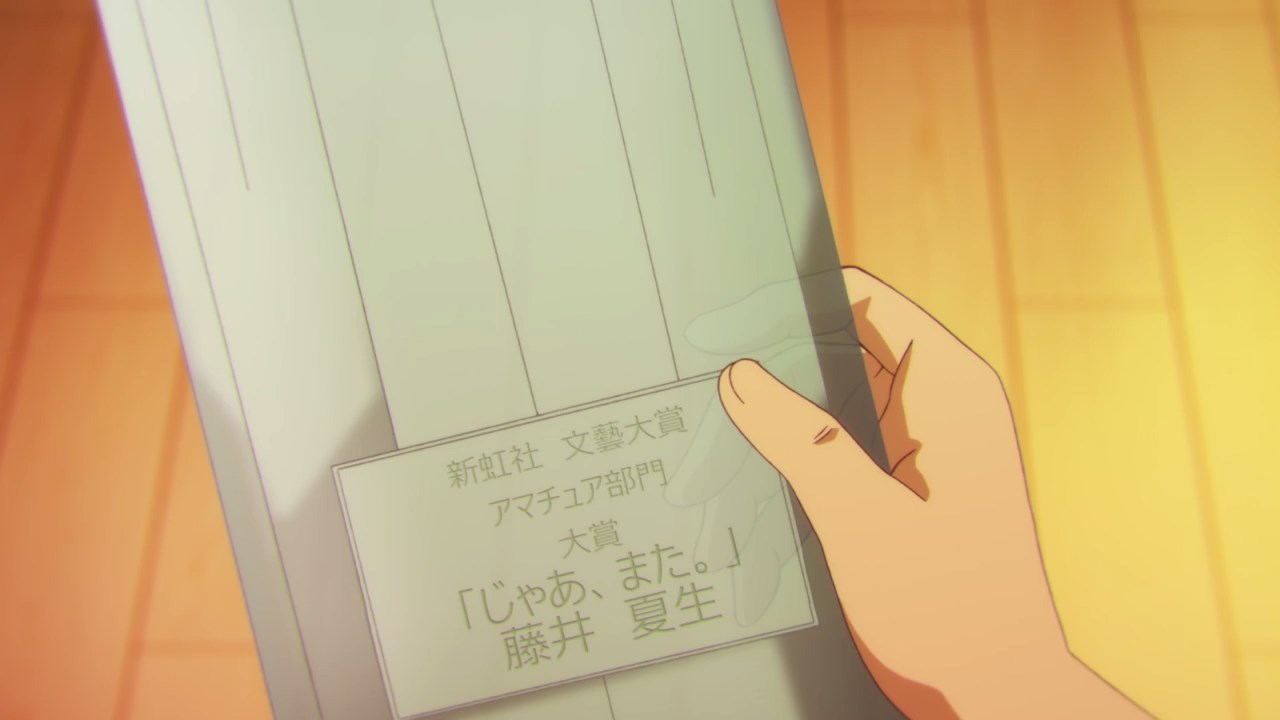 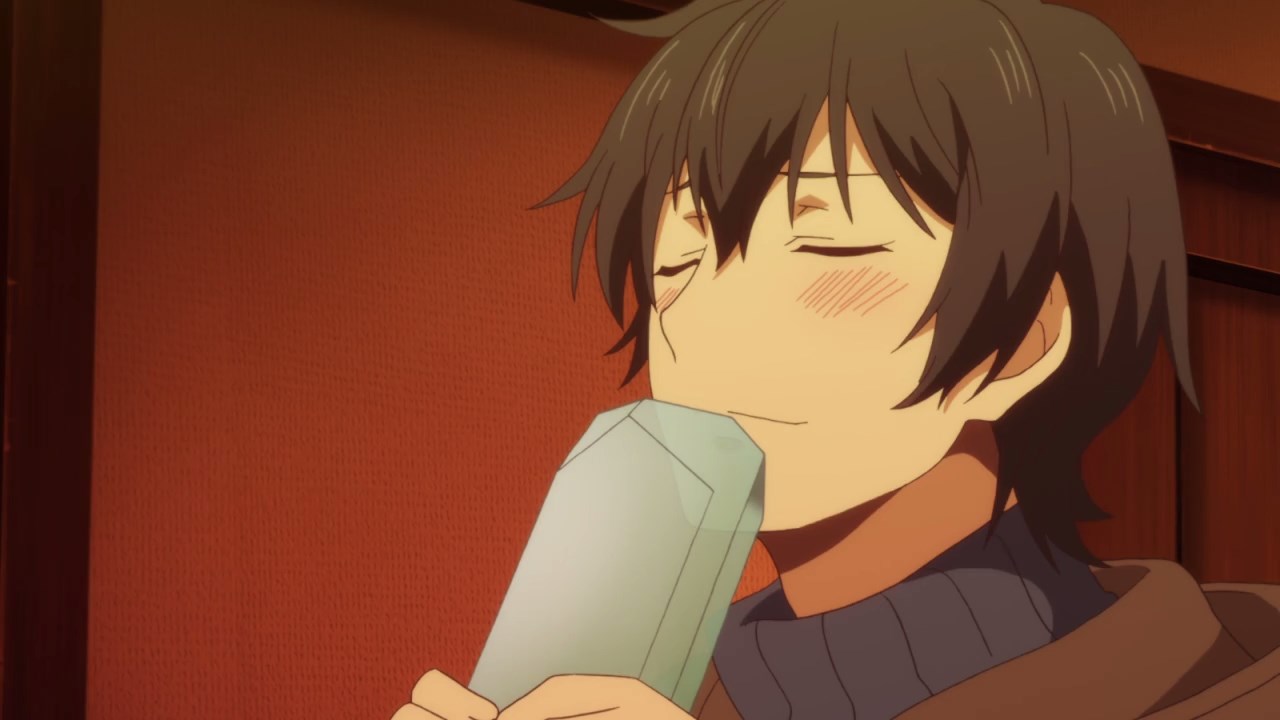 In any case, Natsuo Fujii received the award for winning the Amateur Division and really, his family should be proud of his achievement.

Of course, this is just the beginning of his career as a novelist, but if only Natsuo will share it to Hina-nee. 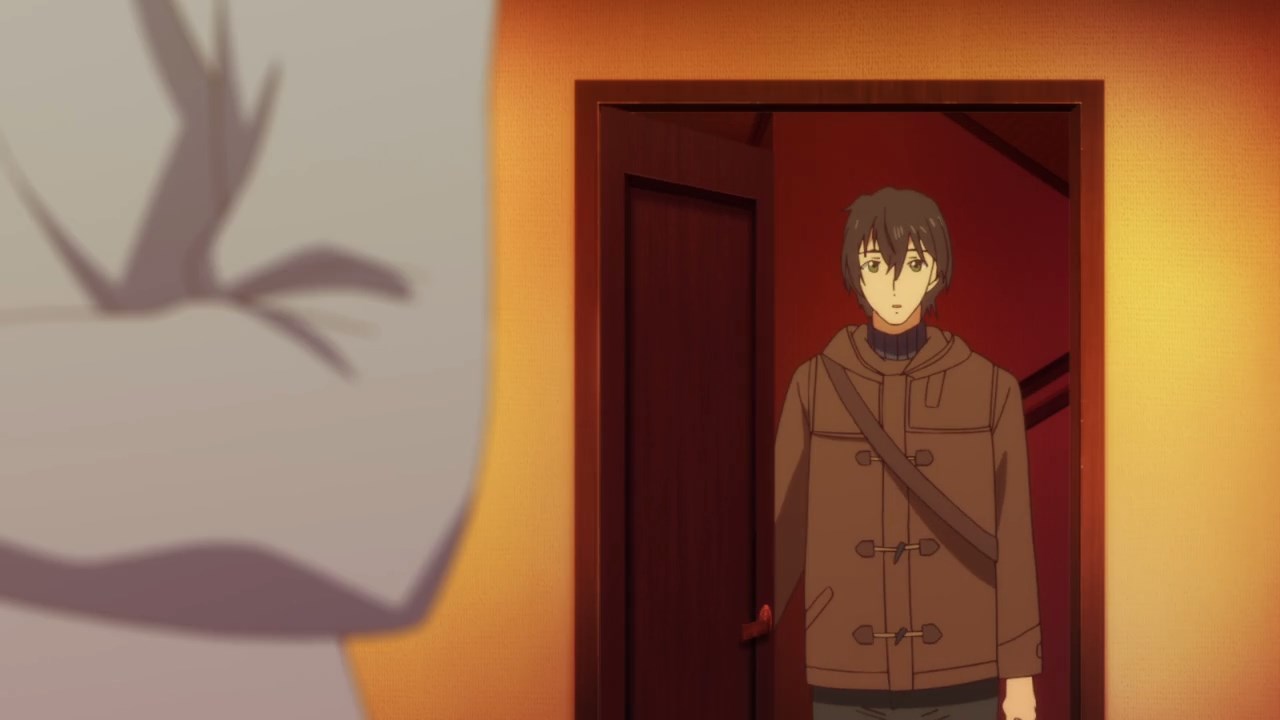 But you know what, it appears that he won’t have to search for Hina-nee any longer as she’s back to see Natsuo again. 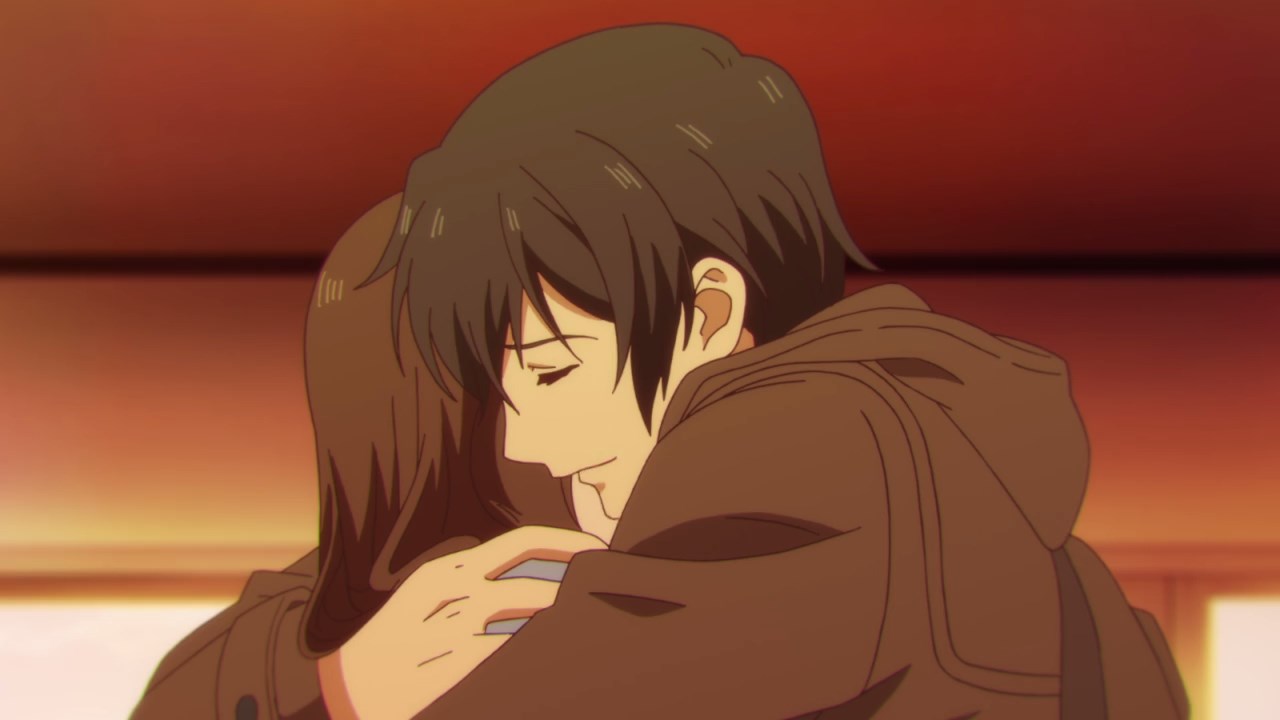 In any case, it looks like there’s a happy ending for Natsuo Fujii as he’s finally reunited with- 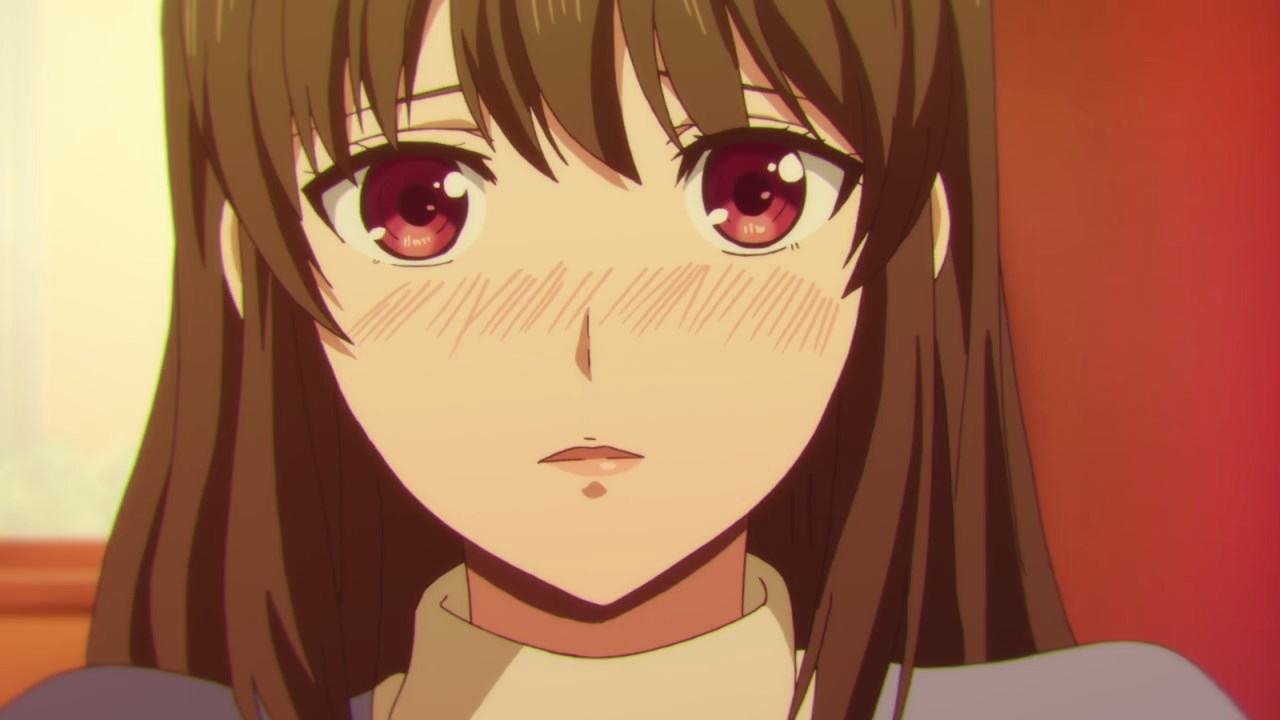 Wait, that’s not Hina Tachibana. On the other hand, isn’t that Rui Tachibana wearing a wig? What’s going on? 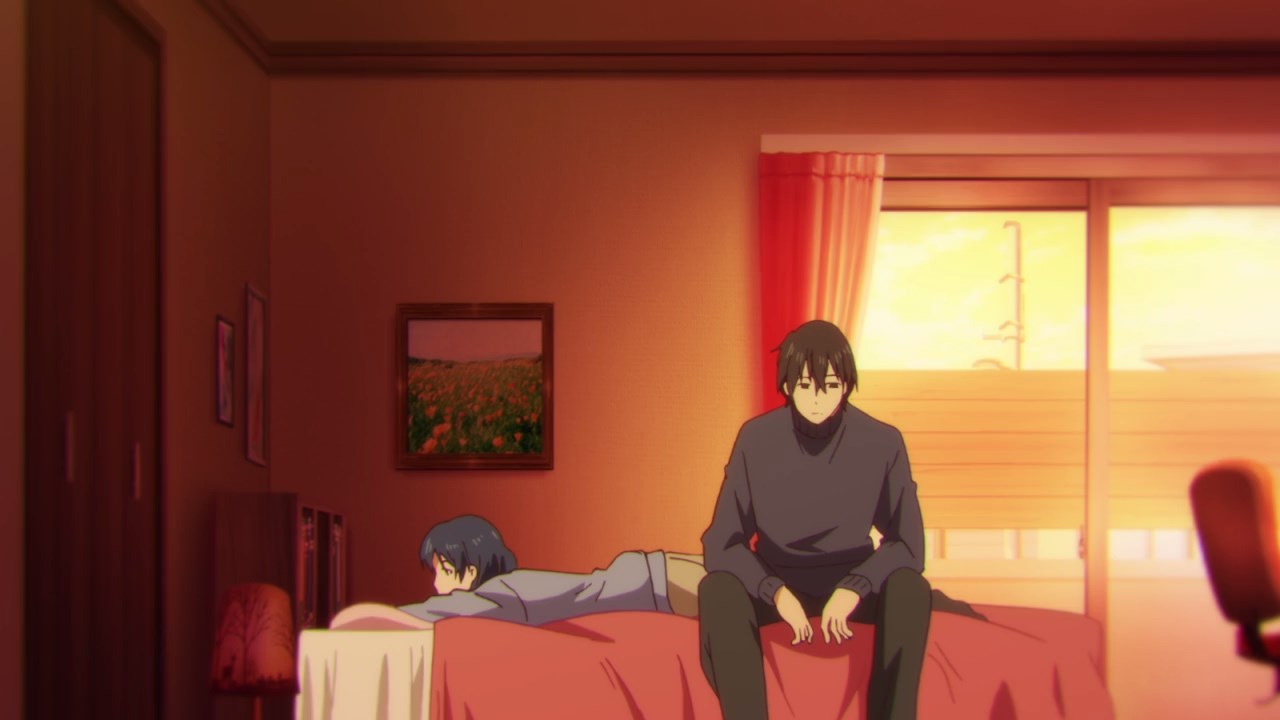 Turns out, it appears that Rui wants to see if she’s good with long hair, so she asked Momo Kashiwabara to borrow some wig to try it out. But still, it’s bad to impersonate someone that Natsuo knows, especially his former lover Hina-nee, although Rui finally understands on why he missed Hina-nee so much.

In any case, Natsuo Fujii told Rui Tachibana that he won the Amateur Division of the 77th Shinkosha Literary Art Awards. Oh, and Natsuo told Rui that he already had sex with Hina-nee since he’s secretly dating her. 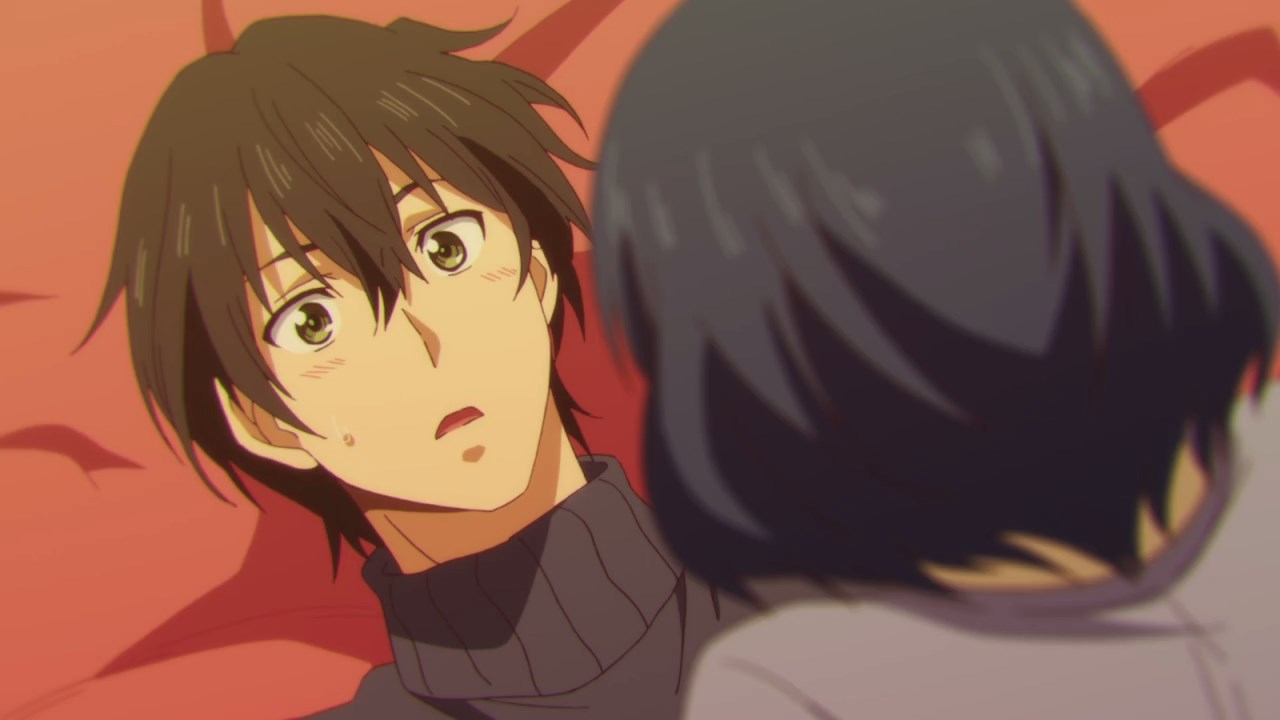 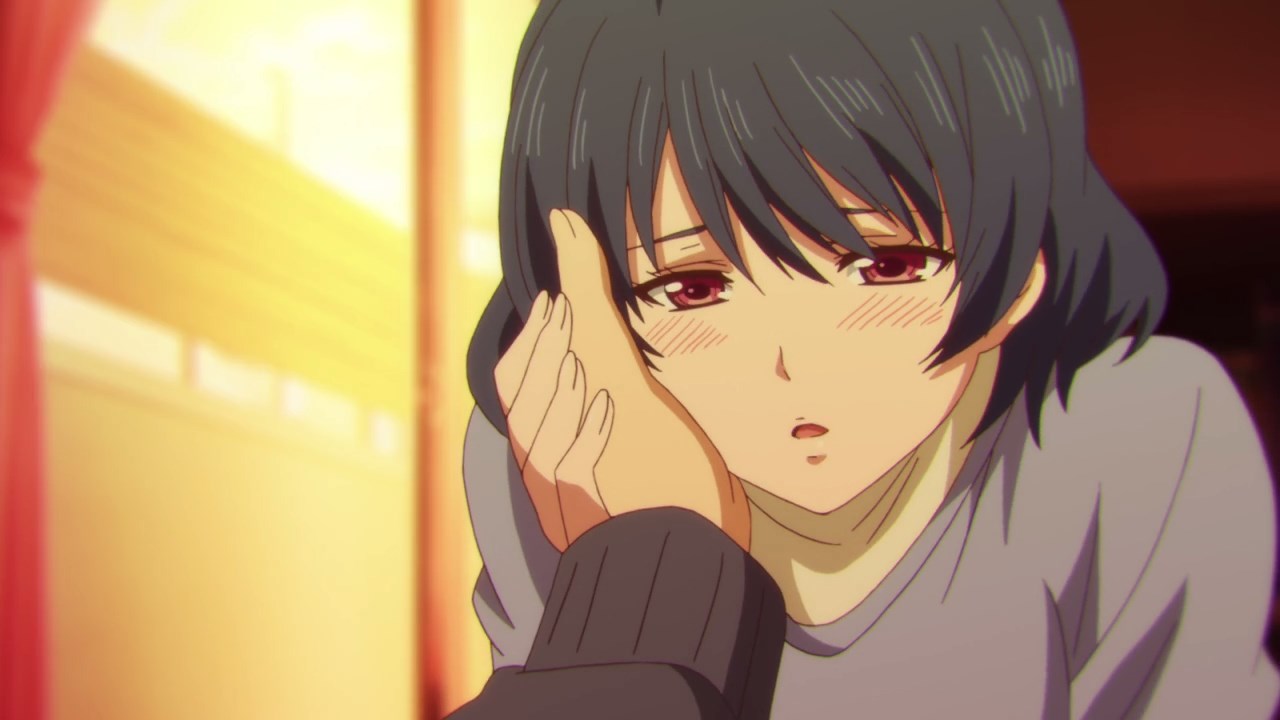 But you know what, since Hina went far away from her family, I think it’s time for Rui to make her move towards Natsuo as she really loves him so much.

However, they’re still walking a dangerous path where their relationship will be in jeopardy despite not being related by blood. 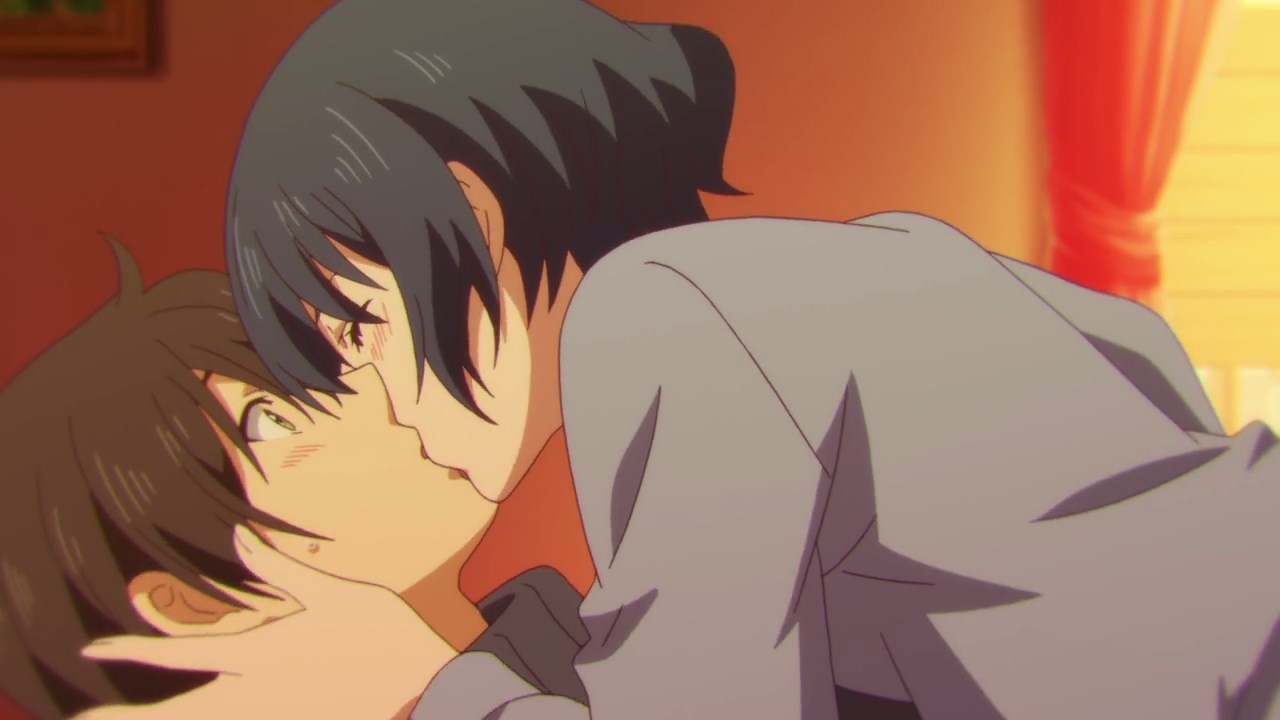 In any case, that’s about it for this series as we end it with Rui Tachibana kissing Natsuo Fujii. But you know what, I blame Natsuo for throwing away everything to be with Hina Tachibana, only for them to be separate because they’re not only step-sibling, but they have different standings where Natsuo is the student while Hina-nee is the teacher. And let’s not forget about Rui Tachibana in which I feel bad for her since she’s the one having her unrequited love for Natsuo Fujii, much like a cetain Hanabi Yasuraoka from Kuzu no Honkai.

Anyways, Domestic Girlfriend is decent to watch, but not good enough to warrant a sequel as some viewers will just read the manga which is better as they say. But you know whay, maybe it’s better to end this series like this, but their future is uncertain because who knows what Natsuo Fujii and Rui Tachibana end up with once their secret relationship got exposed.

With that said, looks like it’s time say farewell to them as I’m finished watching Diomedia’s adaptation of Domestic Girlfriend!