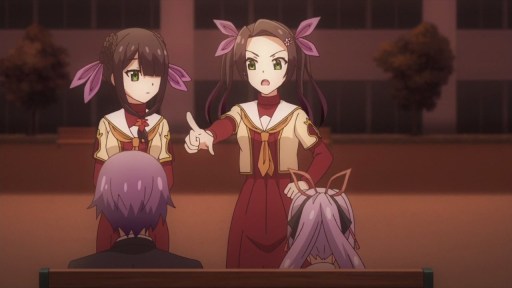 Well look what we have here, seems that Haruna butted in just as Akino is about to tell something to the Nagami siblings.

By the way, the Kanzaka sibling are enrolled at Reihou Girls’ School, although Akino Kanzaka is about to graduate soon but man, does Haruna have a sense of humility instead of mocking everyone as if she’s on a high ground together with her sister?

Of course, Suzuka Nagami won’t take Haruna’s words lightly as she’ll defend her brother’s work, despite the fact that she’s the one who created the novel in the first place. 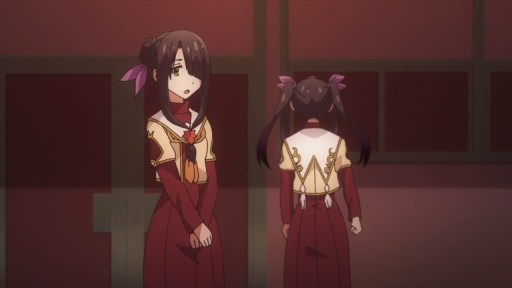 Anyways, Akino Kanzaka apologized to Haruna’s rude behavior, but she point out towards Yuu Nagami that he’s touching something inappropriate…

…like Suzuka’s chest. Come to think of it, I wonder if she deliberately wedge in between Yuu and the Kanzaka sisters so that her brother can touch her flat chest?

With that said, time for them to finish their doujinshi for the upcoming Comic Mark- I mean Comic Stage or Comista. 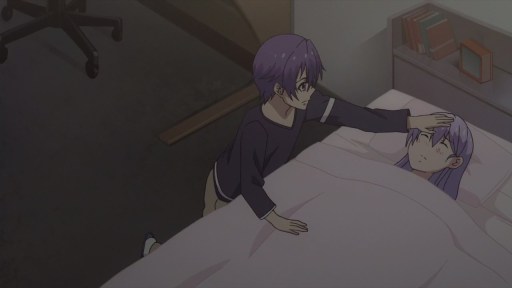 But then, Suzuka got a fever in which she work overnight to finish her latest manuscript. That’s sucks for Suzuka Nagami because her career as a novelist is on the line and she (or should I say Towa no Chikai) cannot lose against Ambivalence.

So, it’s up to Yuu Nagami on writing the story for Towa no Chikai’s first doujinshi. However, let’s not forget that he hasn’t wrote anything decent since Yuu spent his time as Suzuka’s stand-in.

And really, Yuu’s writing hasn’t improve much that he’s not excited at all upon reading it. Um Yuu, you should dig deeper on what makes Suzuka’s novel looked great. I mean, you just scratch the surface on why a bro-con novel is so appealing.

Then again, Yuu is not aware that the novel was created because Suzuka loves her brother, but Yuu is so oblivious to Suzuka’s feelings that I feel bad towards his little sister.

Oh yeah, seems that Ahegao Double Peace wants to show her illustrations from 4 years ago.

As you can see, Ahegao Double Peace started a bit rough as she got into drawing lewd artwork thanks to eroge. Yeah, it doesn’t turn me on.

As for Yuu, he needs to create a story that will compliment on Ahegao Double Peace’s illustrations because that would be a dealbreaker to everyone if his story is shit.

And now, the day of Comic Stage has finally arrived as Ambivalence declared that they’ll win against Towa no Chikai and Ahegao Double Peace with their doujinshi. Bold statement there, Haruna Kanzaka!

Of course, Towa no Chikai’s doujinshi got sold out because c’mon, most of them are fans of either the author or Ahegao Double Peace. Then again, why not both?

Despite selling all of the copies to Comista attendees, Yuu is worried that his story would ruin Ahegao’s amazing illustrations. 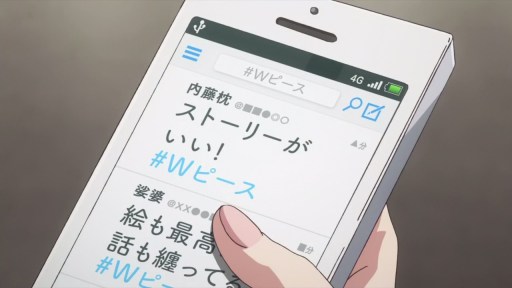 However, it appears that Towa no Chikai’s doujinshi are getting some praise across social media that Yuu Nagami was surprised to see that his first take on writing a story, combined with Ahegao Double Peace’s lewd drawing, is getting some good reviews.

Oh and as for Haruna Kanzaka, it appears that she’s pissed because everyone is praising Towa no Chikai’s doujinshi compared to Ambivalence. Sure that they’re good at making doujinshi, but making lewd ones is not their forte.

Meanwhile, here’s Akino Kanzaka as she shows Towa no Chikai’s doujinshi to her sister Haruna. C’mon, Haruna might learn something from Yuu and Ahegao’s combined work.

But judging from Haruna’s reaction, seems that she’s surprised to see that Towa no Chikai’s work is good- No, a magnificent work which combines Yuu’s storytelling with Ahegao’s drawings.

Well, looks like this year’s Comista has a winner now and it’s not Ambivalence, but rather the combined effort of both Towa no Chikai and Ahegao Double Peace!

With that said, Comic Stage has finally ended at it seems that Towa no Chikai and Ahegao Double Peace has prevailed, meaning that Suzuka’s novelist career is saved. Also, here’s Ambivalence where they admit their defeat towards Yuu Nagami and his friends.

Of course, Haruna Kanzaka wants to apologize towards the Nagami siblings and Ahegao Double Peace for her rude behavior, although she was forced to do it thanks to Akino. Anyways, all’s well that ends well for Yuu and Suzuka Nagami. 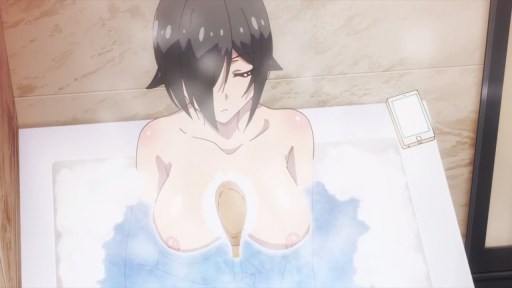 Now let’s move onto the Episode 8 where this scene is the one that I like. It’s Reika Shinozaki scrubbing her body with a shower and letting out lewd voices across the bathroom.

Oh, and Shinozaki is calling Towa no Chikai to discuss the anime adaptation of “This is a Tale of a Little Sister Who Loves Her Brother Too Much to Cope”, although Yuu has to hold himself becuase he can’t let his mind be filled with Reika’s naked body.

But seriously though, this is the only saving grace for Episode 8. The reason why I said that is because NAZ and Magia Doraglier didn’t skimp on quality when animating Shinozaki’s naked scenes.

Anyways, moving onto the next scene where Sakura Minazuki is at the Nagami residence to pay a visit. Unfortunately, she’s not gonna go back to her home because Sakura had a fight against her family, especially towards her big brother who is very obnoxious.

As for Yuu Nagami, he’s shocked that Sakura ran away, although Sakura doesn’t mind having Yuu doing lewd things to her.

And speaking of the devil, looks like Suzuka is here after taking a long bath. Of course, she’s very suspicious towards her brother that Suzuka accused Yuu of bringing a girl to his room.

Then again, Yuu pretends that he’s playing an eroge just to hide the fact that Sakura Minazuki is inside his room. Also, Yuu is not an avid eroge player since he’s mostly spends his time writing novels.

Now then, it’s time for the Nagami siblings to strike a deal with the anime adaptation as Reika Shinozaki invites Yuu and Suzuka to the Sumeragi Fantasy Bunko main office.

Without further ado, it’s time to introduce the director and producer of the anime adaptation, Itsuki Sakurada and Daigen Mitarai. The reason why Reika Shinozaki invited these two guys is because they’re junior colleagues to her. 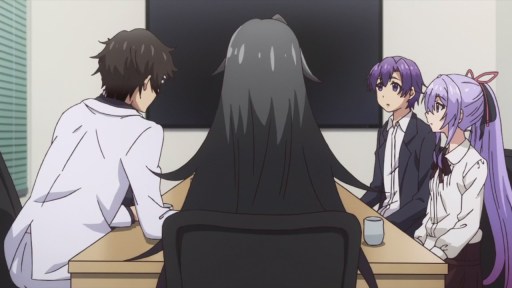 But anyways, it’s time to discuss on what will be the direction for the anime adaptation of Towa no Chikai’s light novel series. Let’s hope that Yuu and Suzuka will strike a deal on this adaptation.

Then again, seems that there’s a bit of miscommunication as Itsuki Sakurada questions Yuu Nagami on his fondness towards the main heroine, as well as his knowledge towards the siscom romance genre. Unfortunately for Yuu, he can’t find an answer towards Itsuki-san’s questions because it turns out that director is actually a siscon maniac.

In any case, Director Sakurada was not conviced on Yuu Nagami’s understanding on his novel series (because Suzuka actually wrote it) that he decides to make revisions in order to make the anime more appealing to the fans.

But that pisses Suzuka Nagami off because any revision made by the director would make the story less interesting. Scratch that, the anime adaptation would bomb and thus it’ll destroy a potential mix media franchise for Towa no Chikai’s light novel series.

Still, why would Reika Shinozaki select a siscon maniac director named Itsuki Sakurada in the first place where he’ll just ruin the story for the sake of pandering to the main heroine? On the other hand, there’s Yuu Nagami who couldn’t muster any courage nor knowledge to defend his sister’s work and man, I’m disappointed for his poor showing towards the director and the producer.

Anyways, they have some time to iron out the anime adaptation but for now, it’s time for the siblings to head home and- Wait, I forgot something… 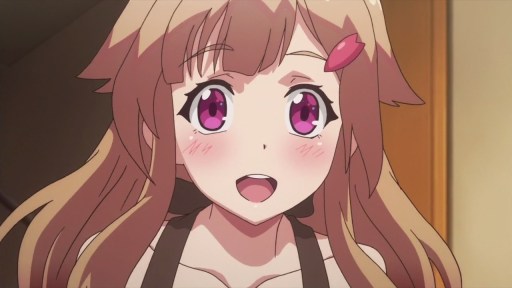 Oh right, we have Sakura Minazuki as she greets both Yuu and Suzuka Nagami. I guess Yuu forgot to lock her up inside his room.

Oh and do I mention that Sakura is weaking a naked apron? Well, Minazuki has that sexy back!

I must say that the Nagami siblings are shocked, moreso with Suzuka as she doesn’t want anyone trespassing her house just to see her brother.

And so, Suzuka Nagami will have to lecture Yuu as bringing girls to his room is forbidden. Oh, and hiding a girl away would make Suzuka even more furious, but then again she’s just jealous because Sakura is with Yuu most of the time. 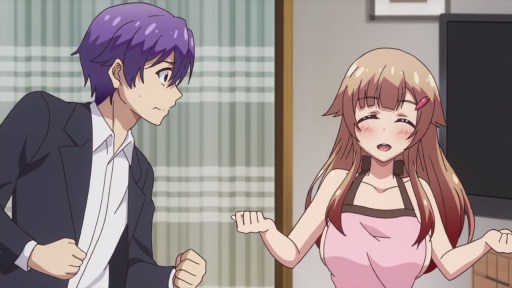 Hell, she even slept with him one time which makes Suzuka’s rage meter hitting maximum, although Yuu didn’t have sex with Sakura because it’s plain wrong!

But you know what, it’s time for Suzuka Nagami to teach Yuu on how to love his little sister dearly which will help on creating a solid pitch towards the director and the producer. Then again, Yuu won’t even notice Suzuka’s feelings anyway.

With that said, looks like I’m down to the final stretch for this series. Will Towa no Chikai’s novel series will have a successful media mix franchise, or it’ll be remembered for having a shitty anime adaptation? We’ll find out in the last 2 episodes of ImoImo!