The Rising of the Shield Hero Episode #16 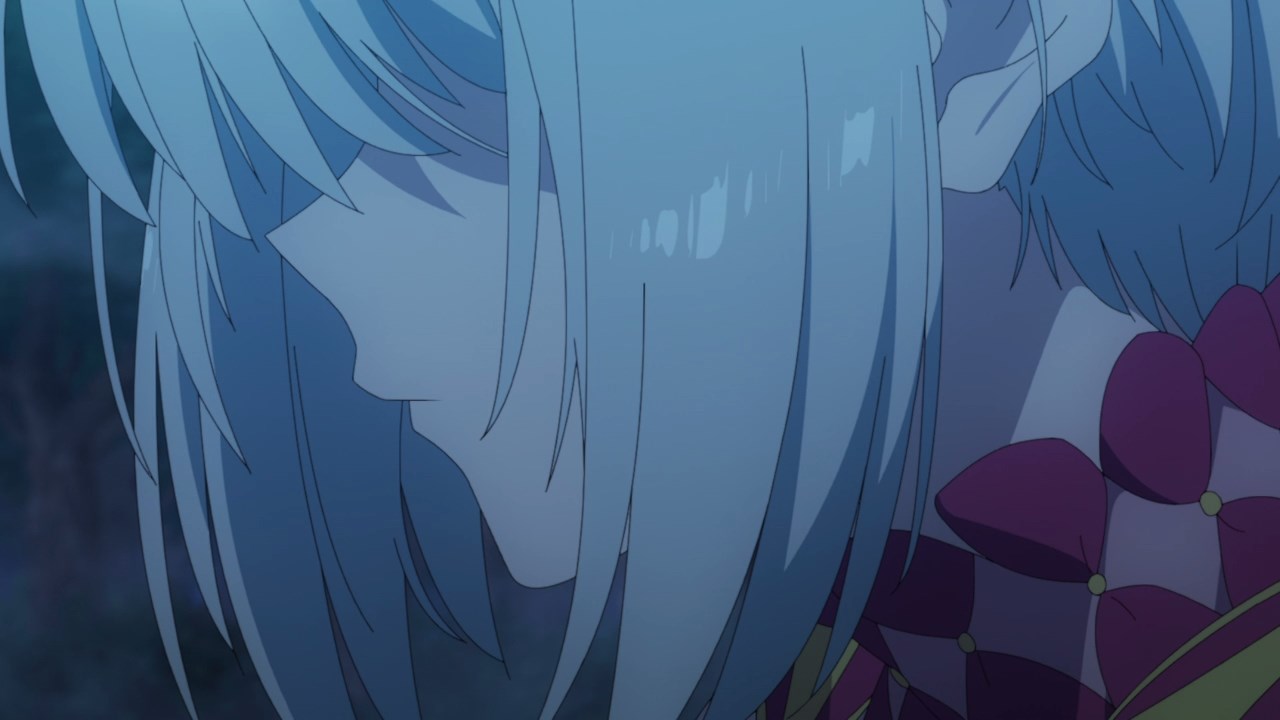 Oh look, we have a new character introduced and she was informed by her followers that they found someone that’s worthy of being a successor. 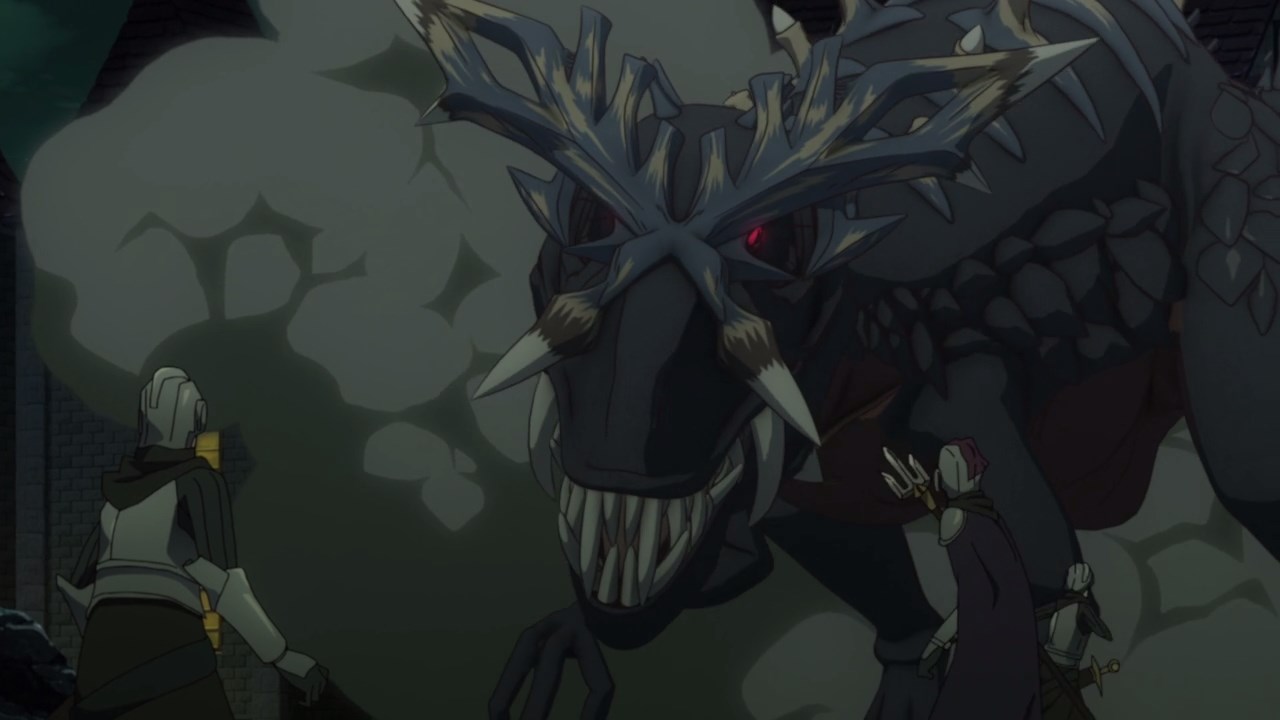 Oh, and the new character was informed about what’s happening in town where it’s being ravaged by a tyrannosaurus.

You may blame Idol Rabier for destroying the seal but more importantly, Naofumi Iwatani and the rest will have to get out of here as fast as possible. 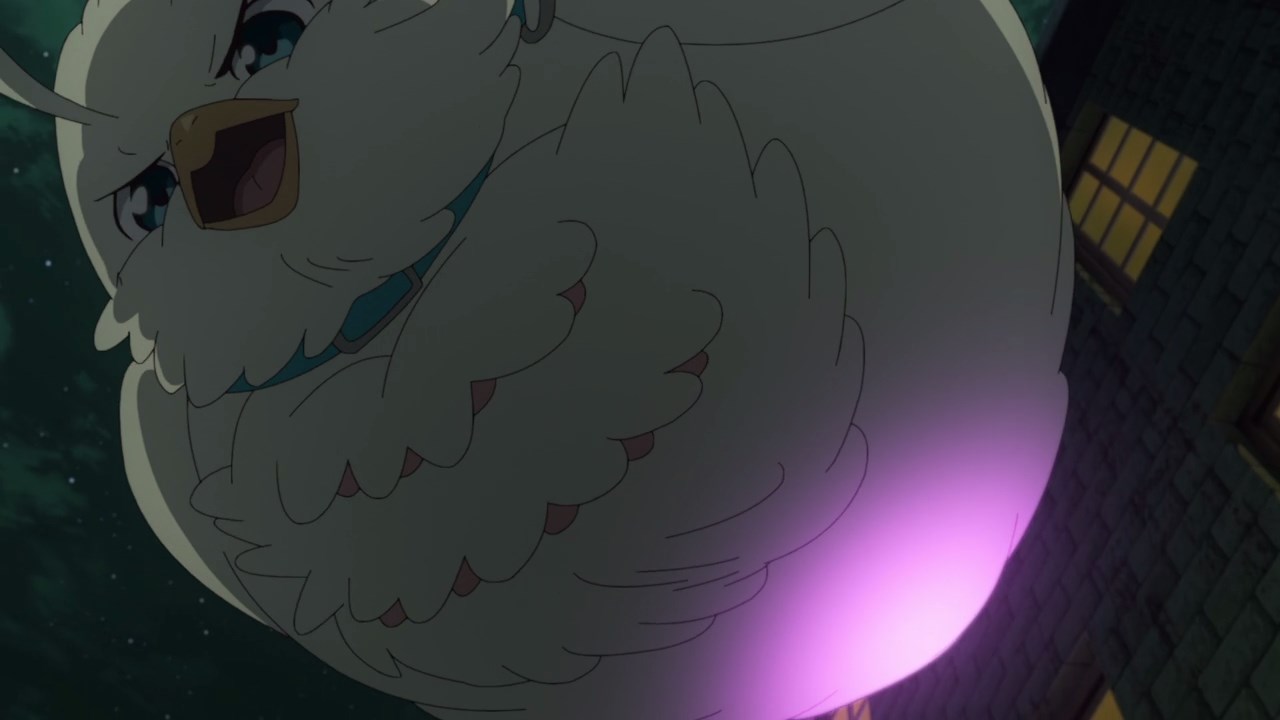 Well, except for Filo in which she decides to take on this tyrannosaurus because she loves fighting against monsters.

Oh and by the way, seems that the tyrannosaurus is being attracted by the crystal. Y’know the one from the zombie dragon back in Episode 8. 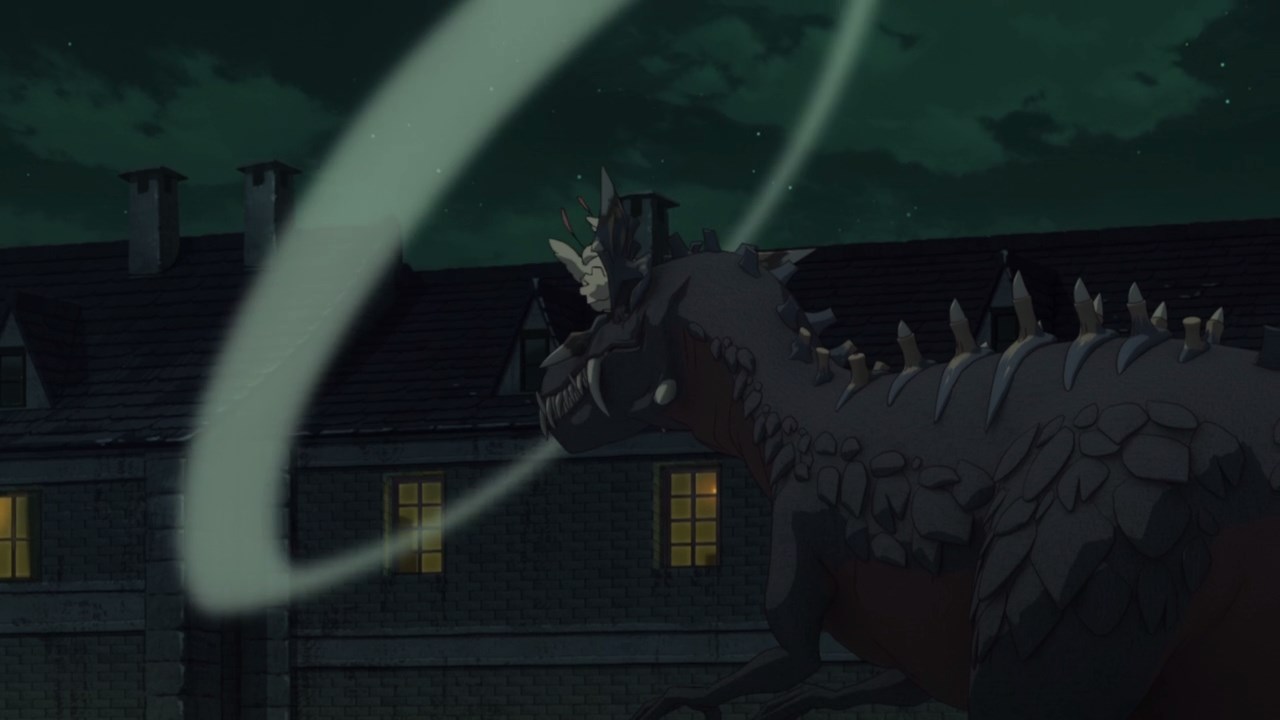 So yeah, it’s not a great idea for Naofumi to fight a monster inside a town. And not only that, but this tyrannosaurus is very tough that Filo couldn’t put a dent on it! 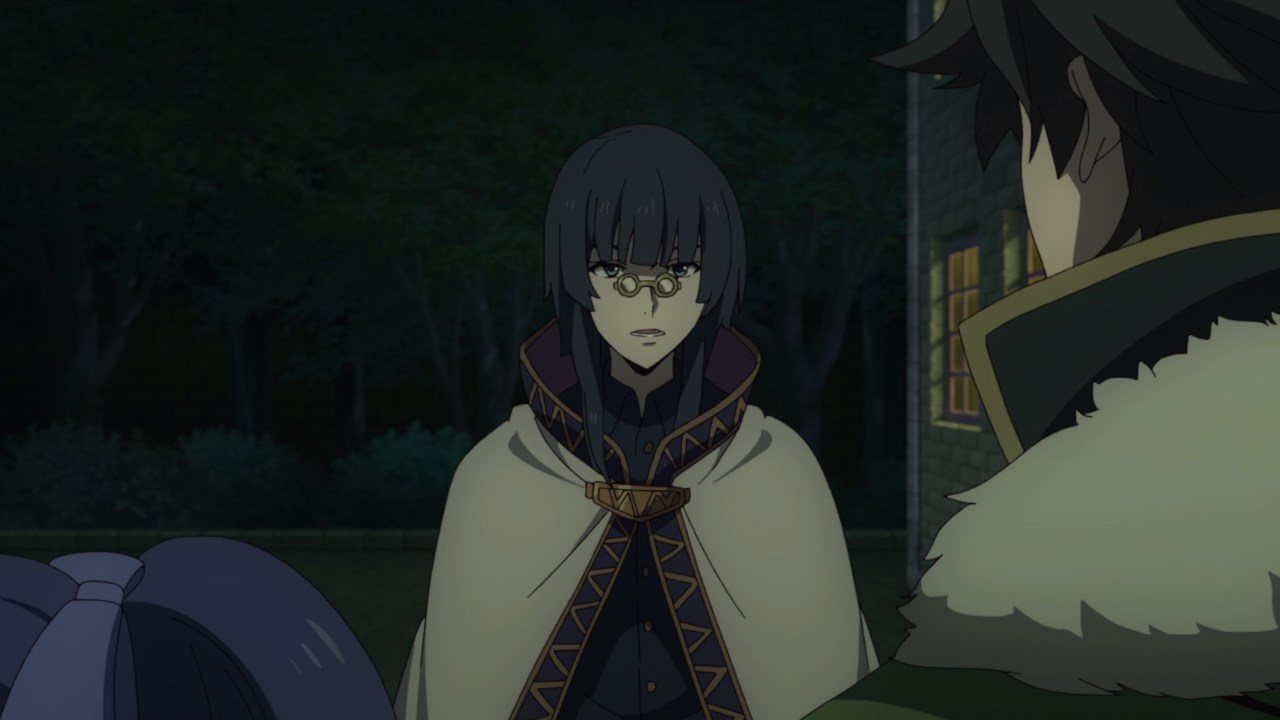 But wait, what about those who are too weak to escape like Keel for example? After all, the likes of Raphtalia don’t want to leave them behind. 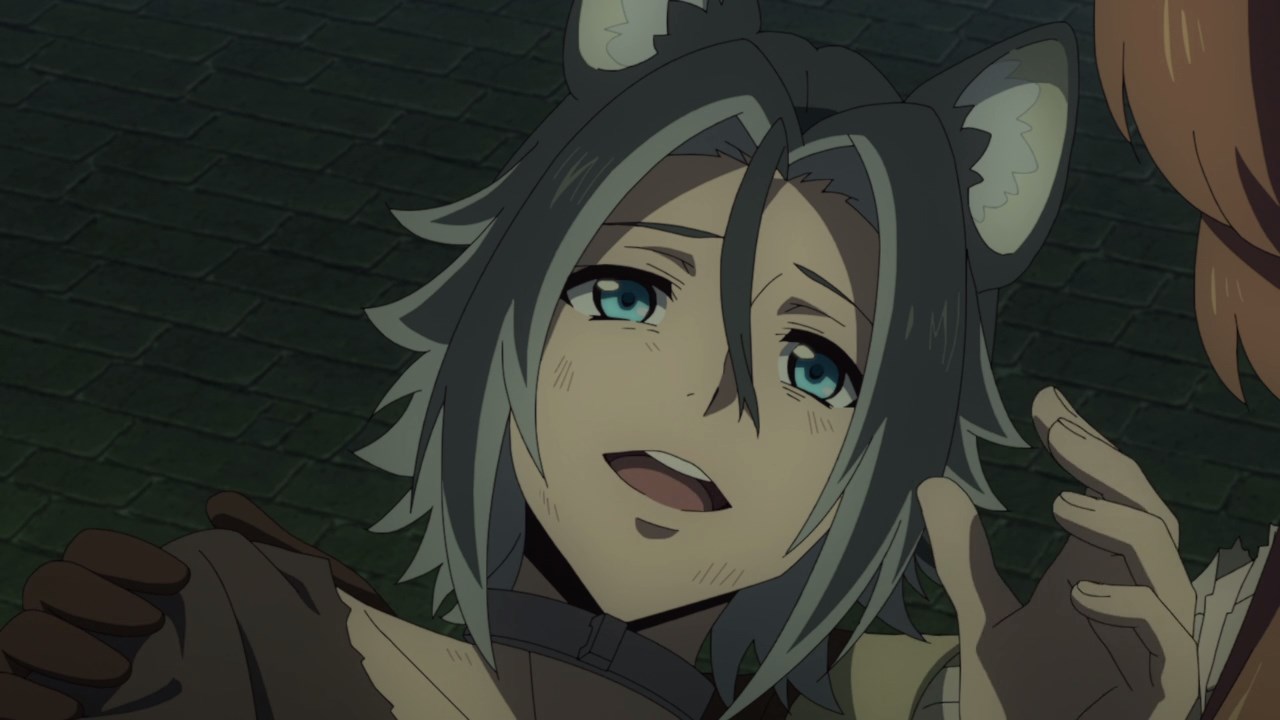 However, Keel told Raphtalia that he’ll be fine as he encourage her to join Naofumi’s party and defeat the monster. Still, Raphtalia is worried that he might not survive. 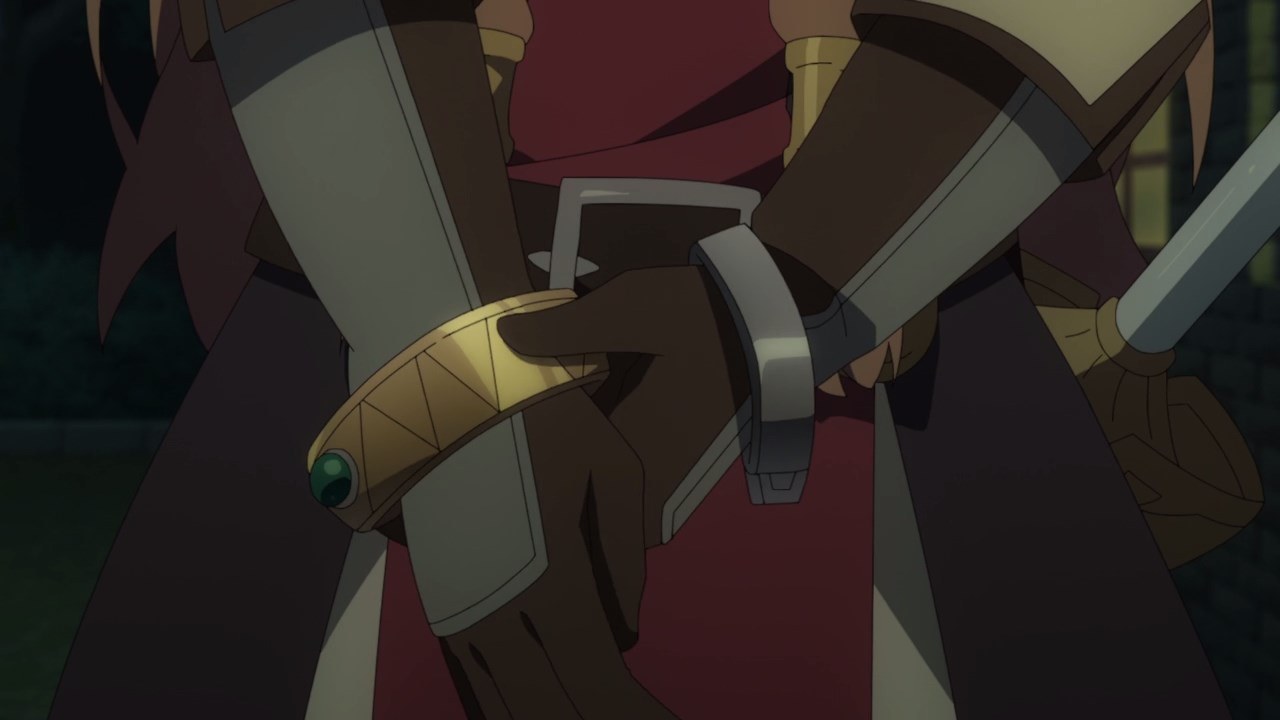 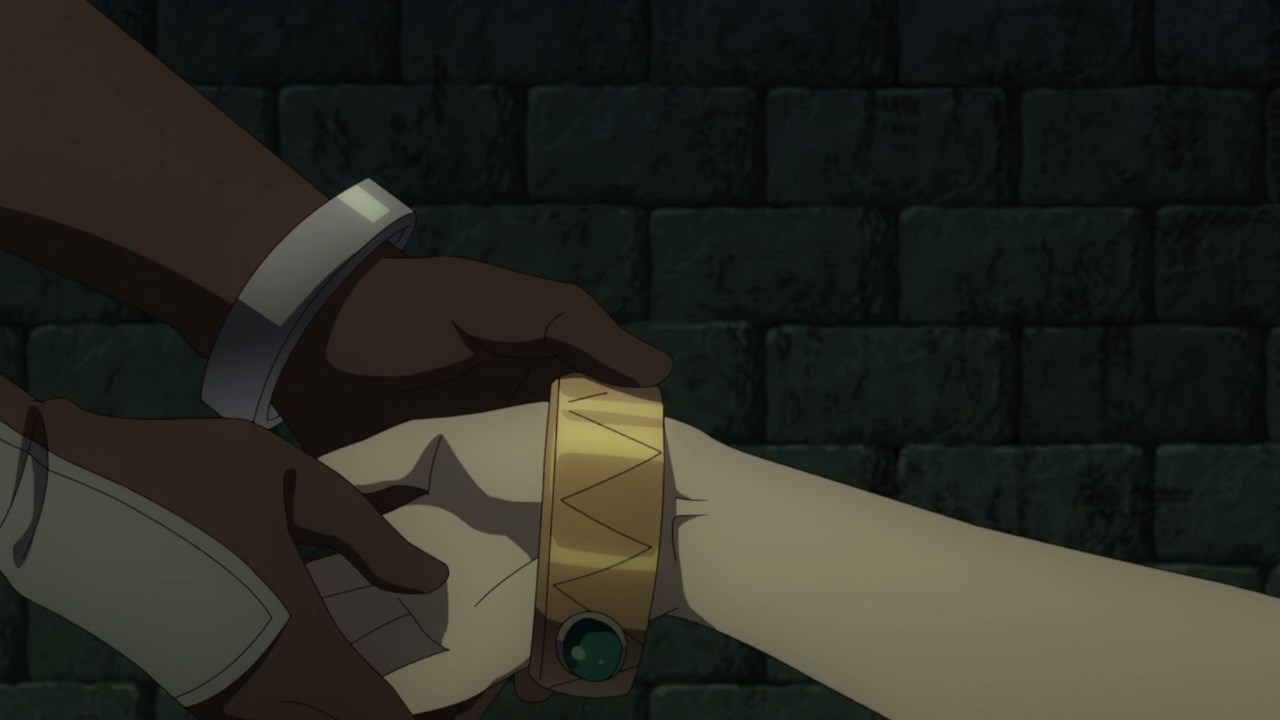 So, Raphtalia gave Keel a bracelet as protection. Sure that Naofumi created it just for her, but Raphtalia wants to let Keel live as she doesn’t want to lose her loved ones again. 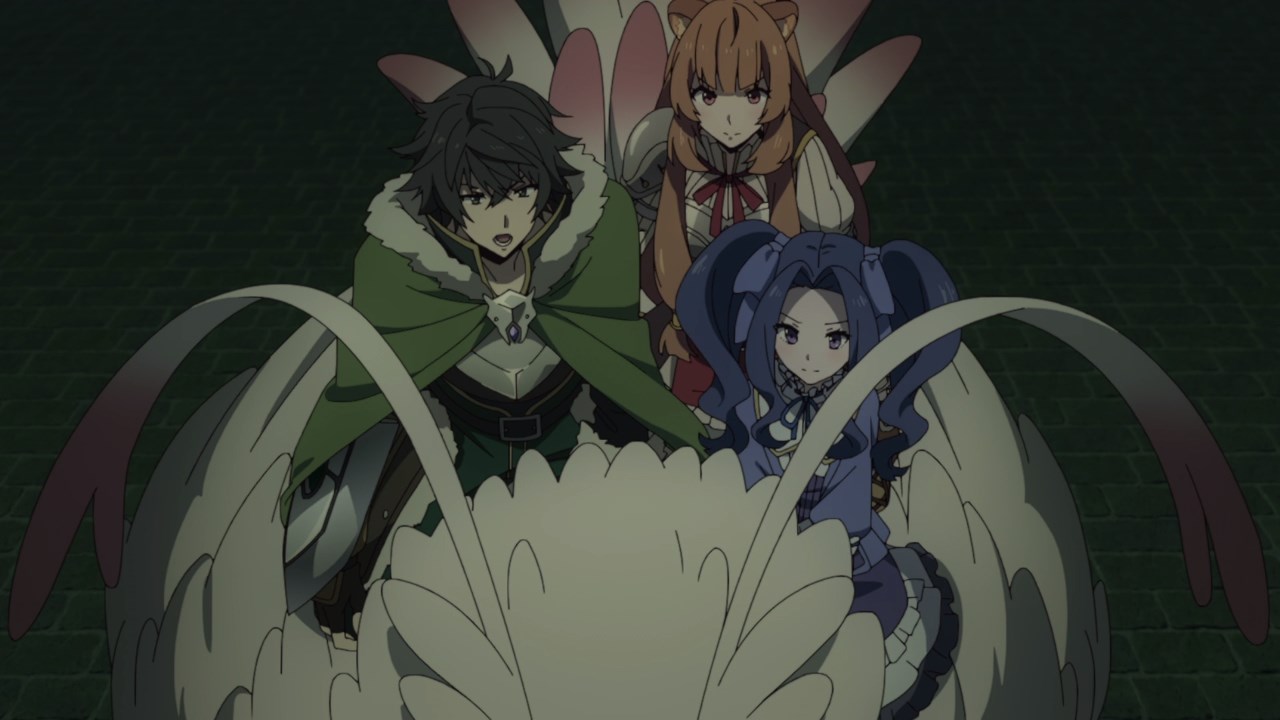 Now then, it’s time for the Shield Hero and his party to lure the tyrannosaurus out of town… 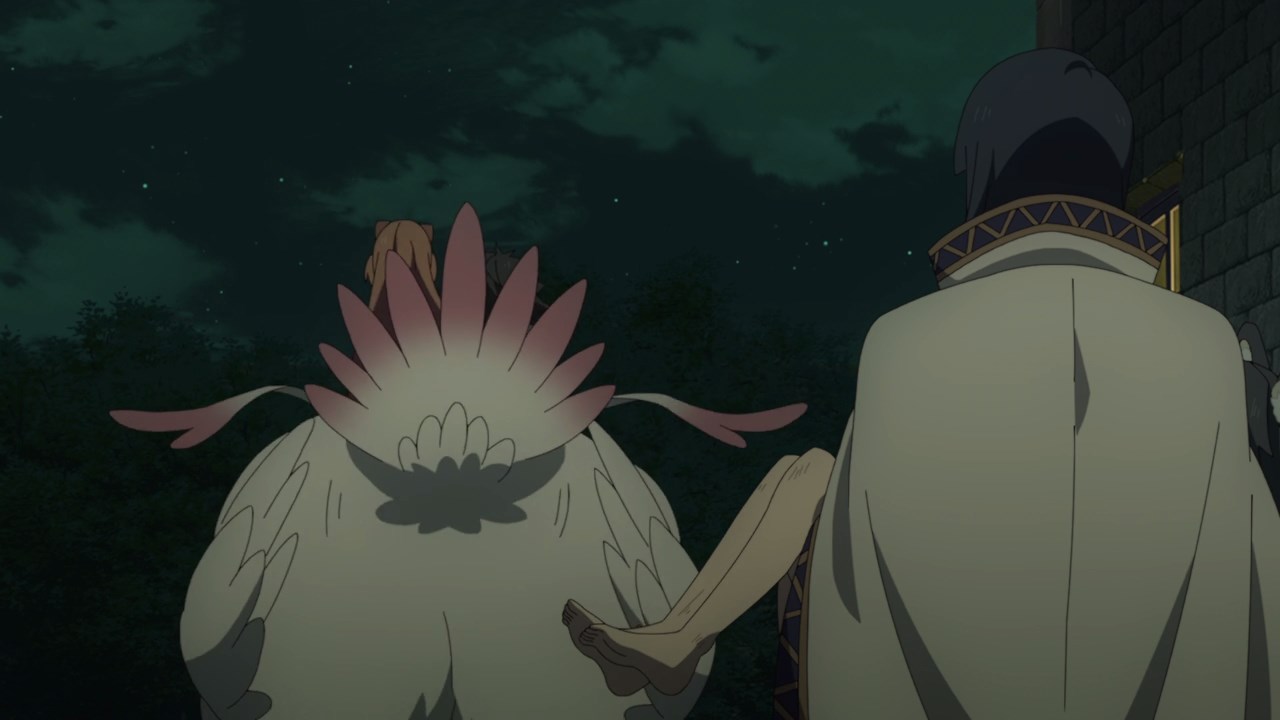 …all while Van Reichnott took the demi-humans and escape. Of course, I’m still see Reichnott as suspicious because if he didn’t let Keel and the rest live, I’ll curse him and Naofumi will beat the shit of out Van Reichnott. 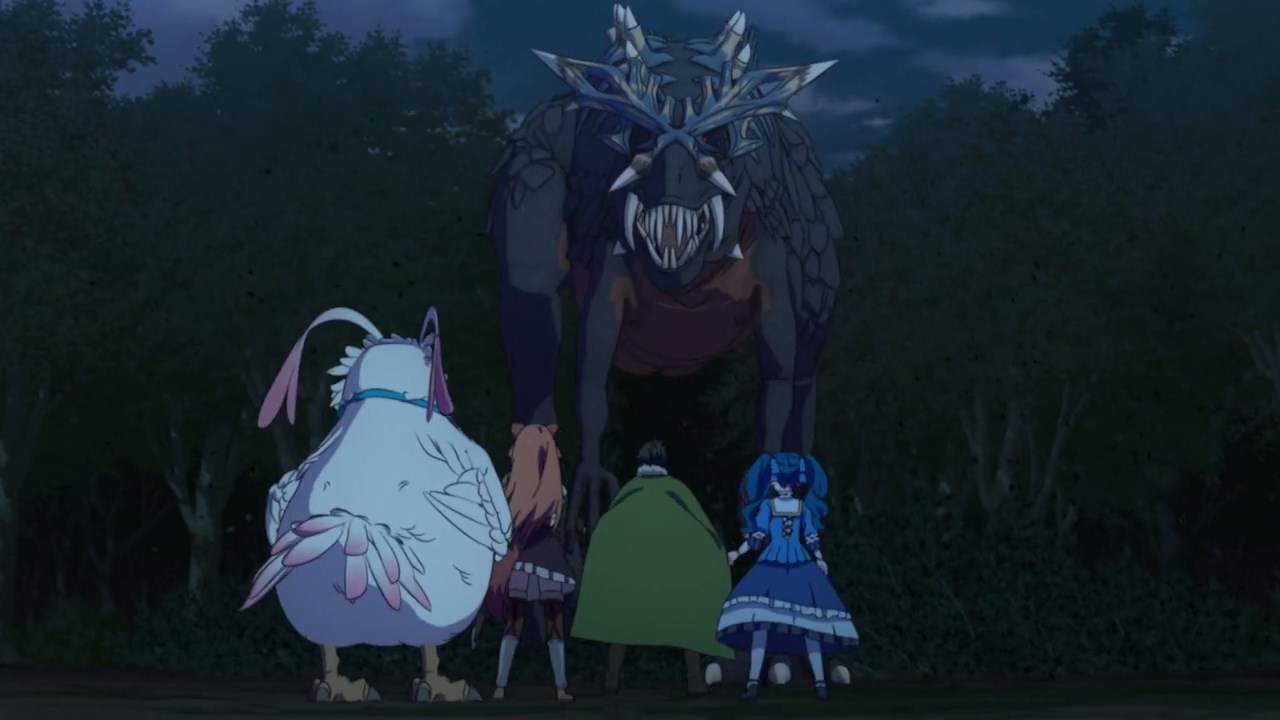 In any case, let’s move onto the next scene where Naofumi and the rest have finally lured the tyrannosaurus out of town. 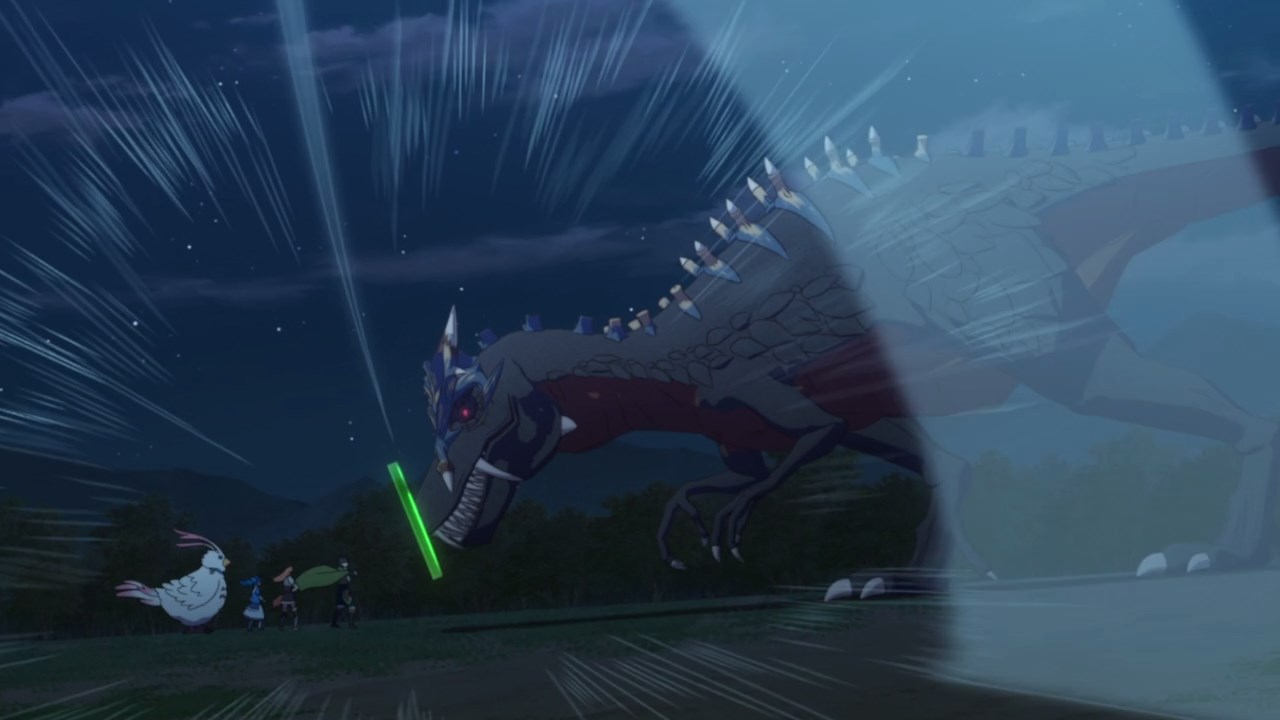 Unfortunately, the Shield Hero and his party couldn’t beat the tyrannosaurus that he’ll have resort of using the Rage Shield to defeat it. 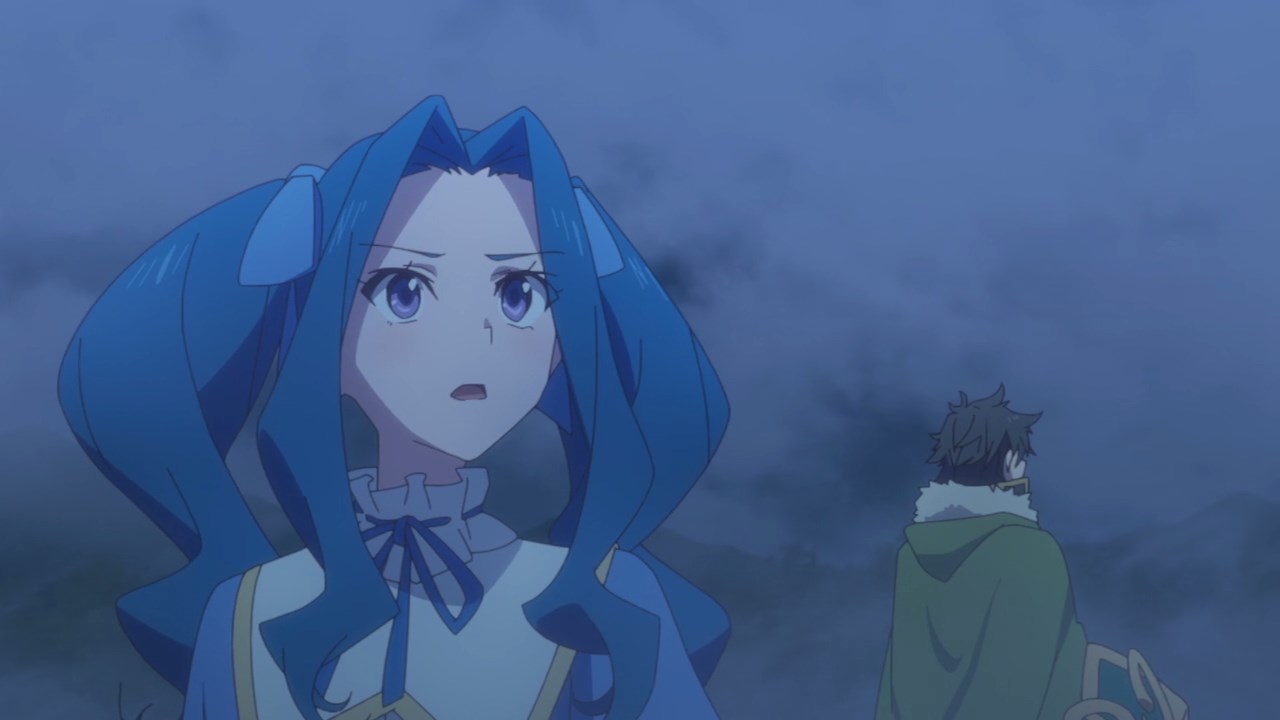 Suddenly, some mysterious voice told Naofumi not to use the Rage Shield, all while the forest is being clouded by this strange mist. 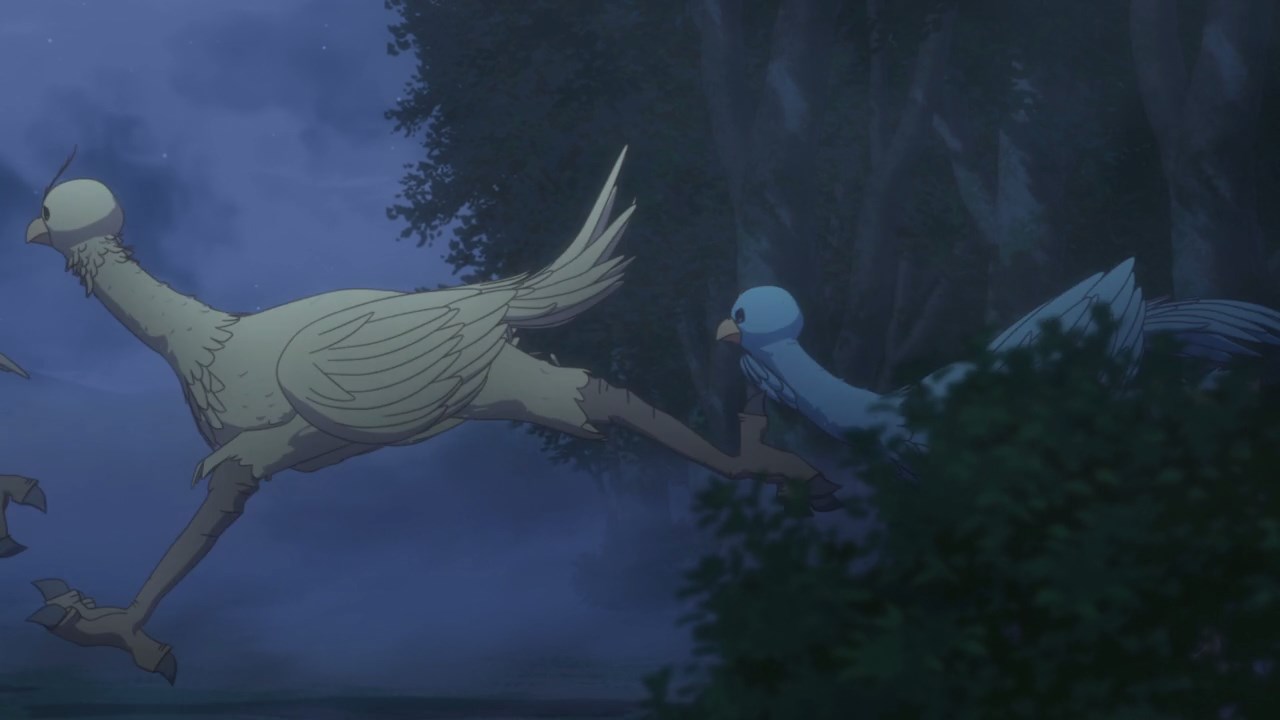 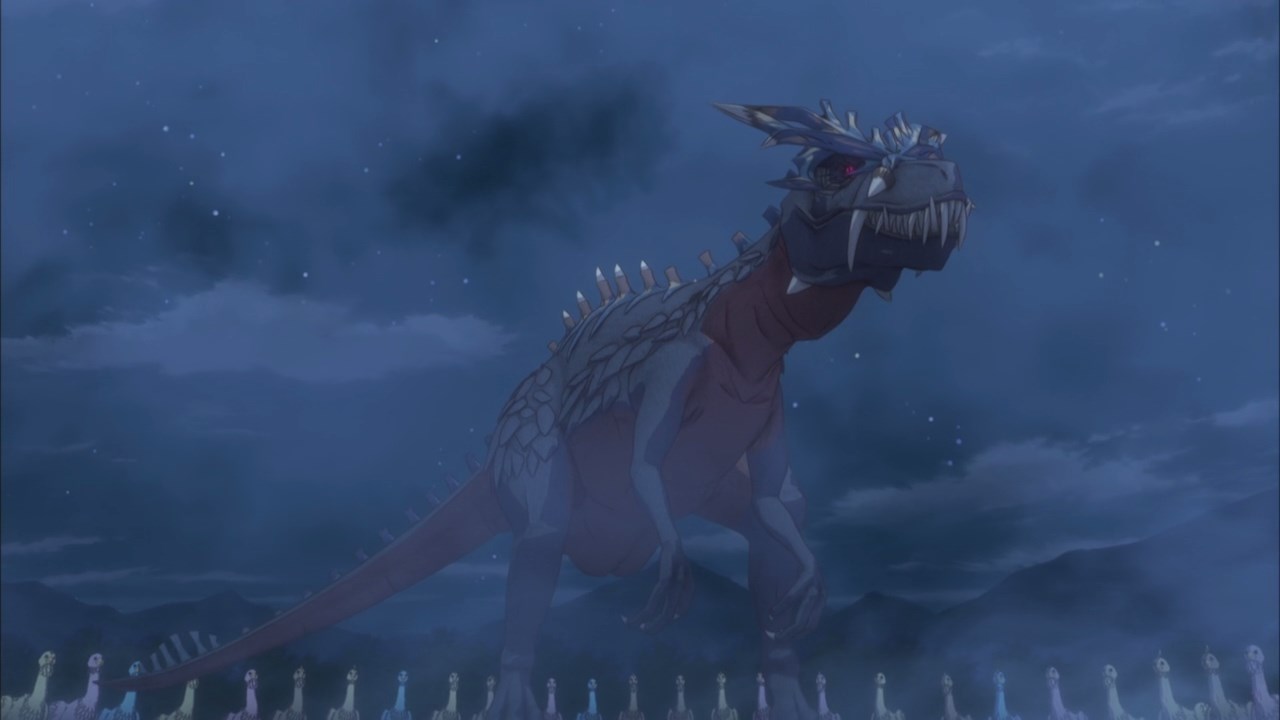 And not only that, an army of filolials have appeared out of nowhere where they surrounded the tyrannosaurus in a circle. Of course, these filolials can’t defeat a tyrannosaurus through numbers alone. 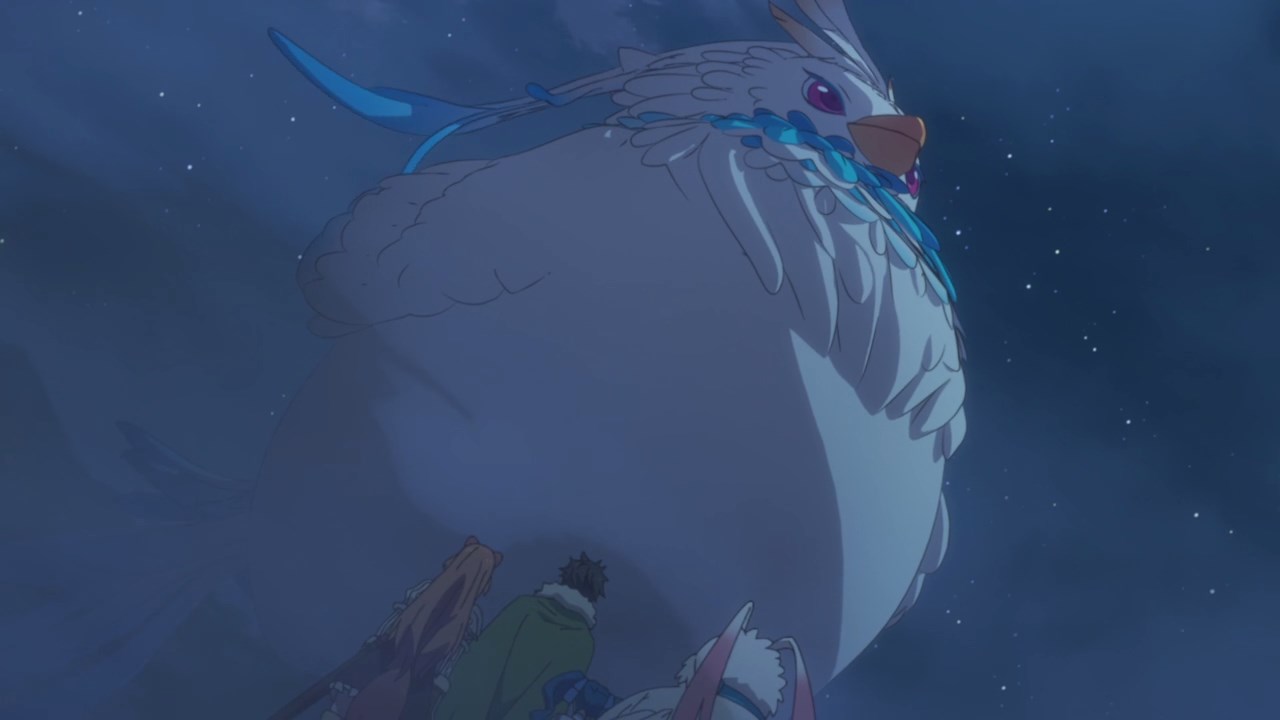 That’s where the most surprising thing that happened on this episode where Naofumi and the rest are shocked to see this giant filolial who looked like Filo, but larger and has cowlicks on its head. 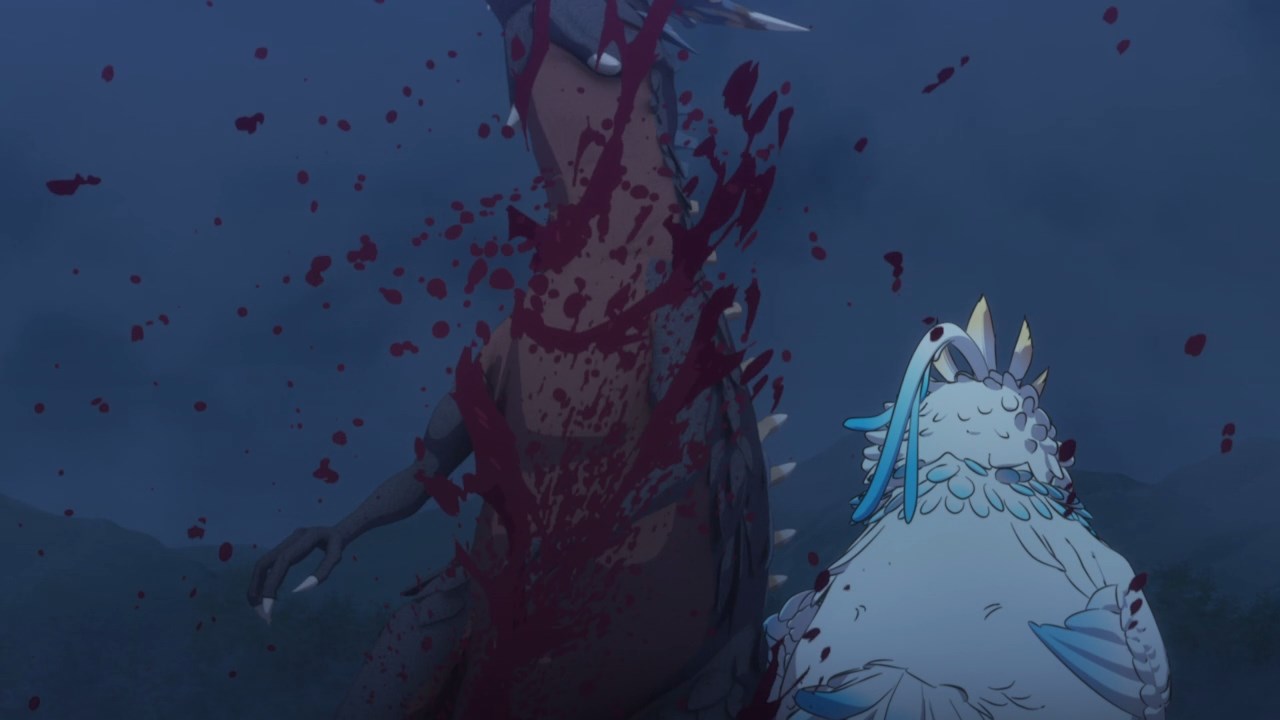 Oh, and this giant filolial managed to defeat this tyrannosaurus in one fell swoop. Well, looks like Naofumi and the rest won’t have to try their hardest to beat this monster down. 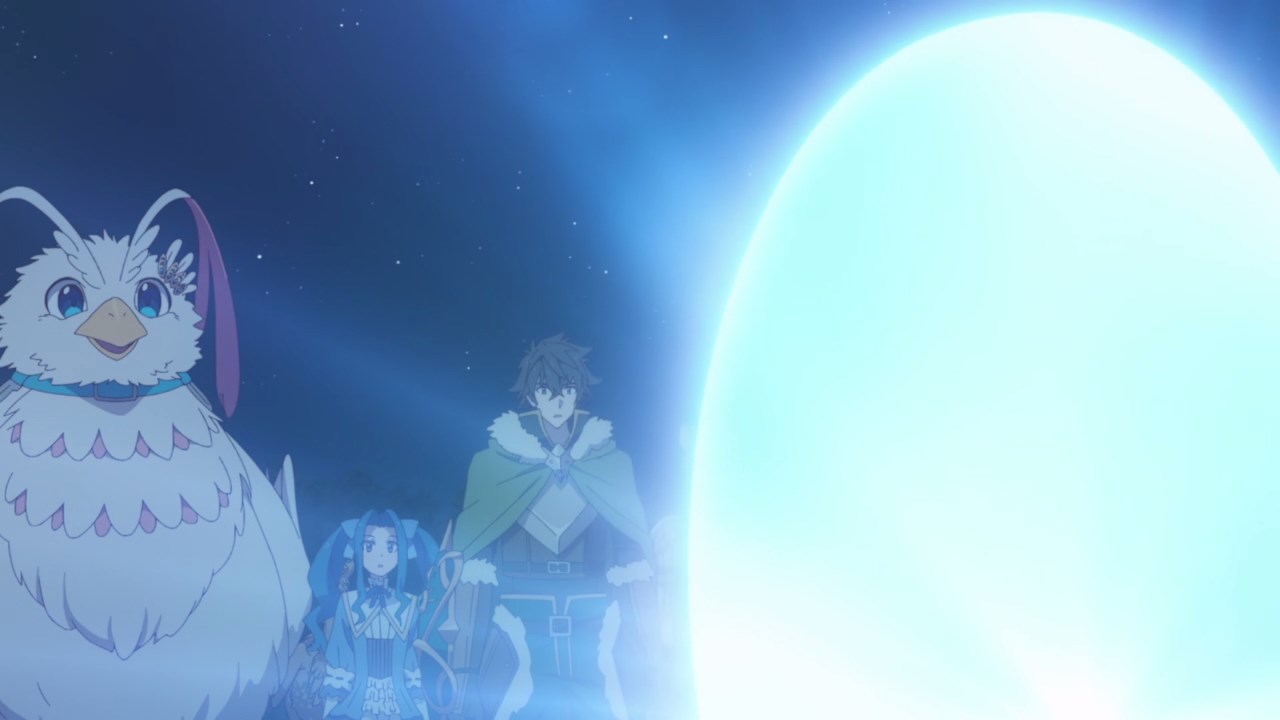 Of course, this giant filolial forgot to introduce itself to the Shield Hero as it transforms into something that would be less intimidating. 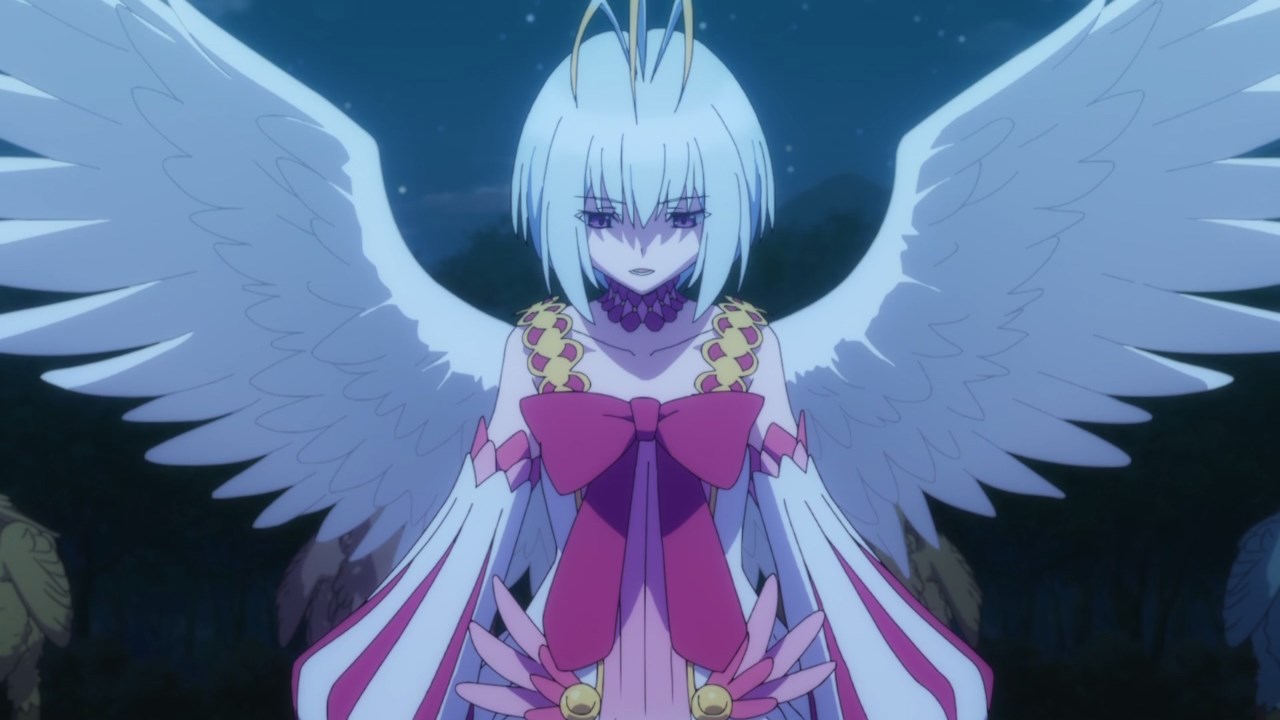 Anyways, this is Fitoria who calls herself as the queen of all filolials. Yes, this is the new character introduced on this episode, butthe reason why she’s here is because Fitoria finally found a successor to the throne. 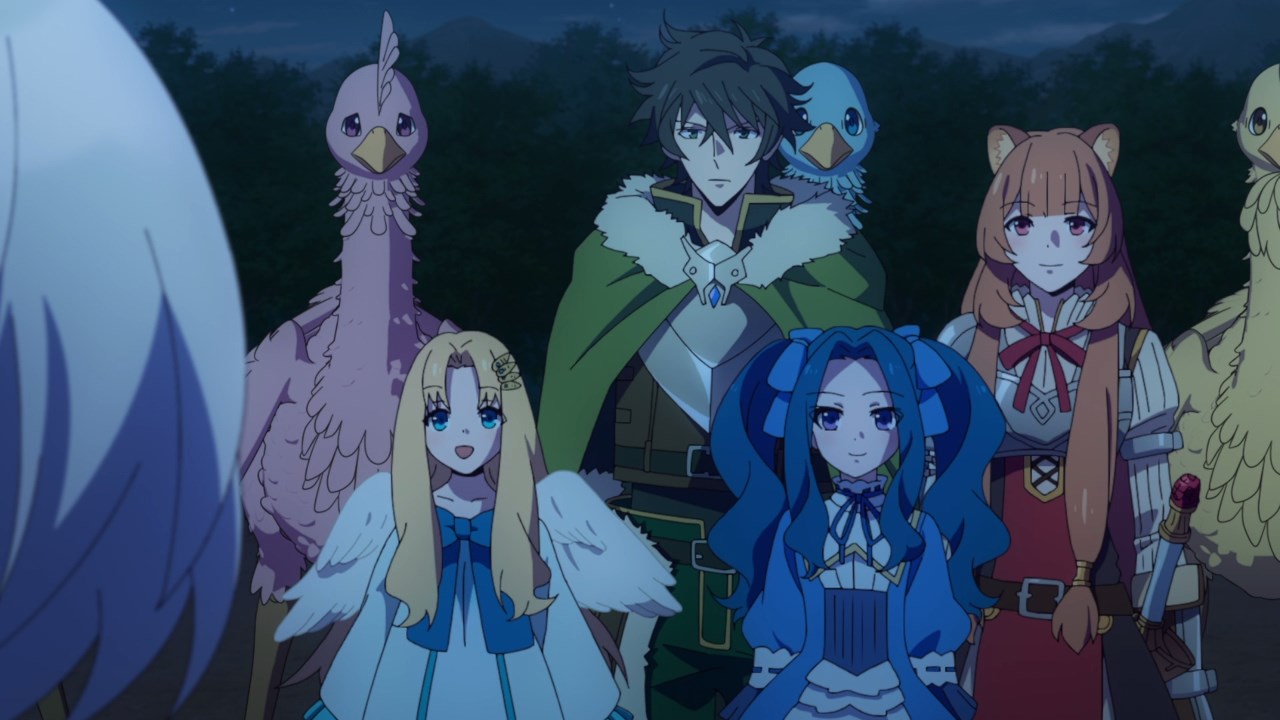 Oh yeah, and she’s referring to Filo as her successor because the Shield Hero raised her in a special way that no other Cardinal Heroes can replicate that, not even the Spear Hero.

Well, Naofumi Iwatani got lucky when it comes to getting a special filolial, unlike Motoyasu Kitamura who is stupid, a lech, and possibly a pedophile. But hey, I’m glad that Filo can become a queen of all filolials! 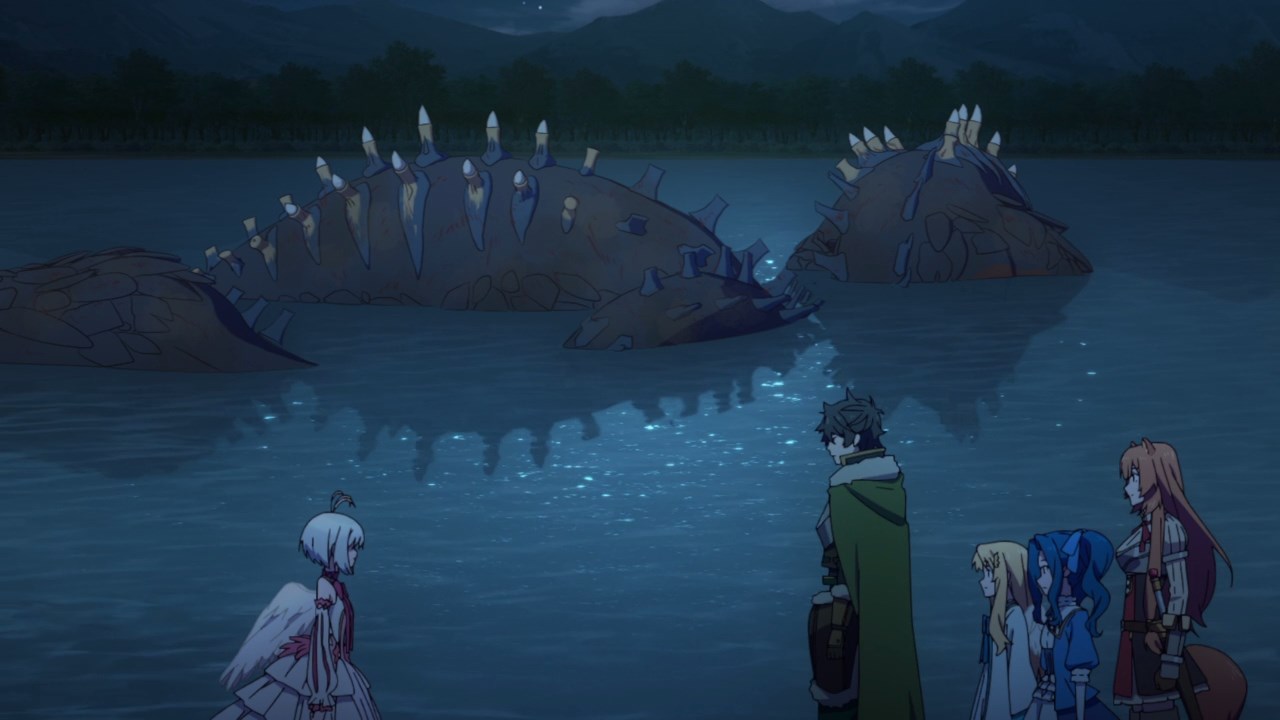 But first, they need to do something about this tyrannosaurus carcass as Naofumi doesn’t want to leave it behind and cause an environmental disaster.

While the Shield Hero will collect some essence from the tyrannosaurus since Naofumi wants to power up his shield, the problem lies on what to do with this giant corpse. How will Naofumi and his party get rid of it? 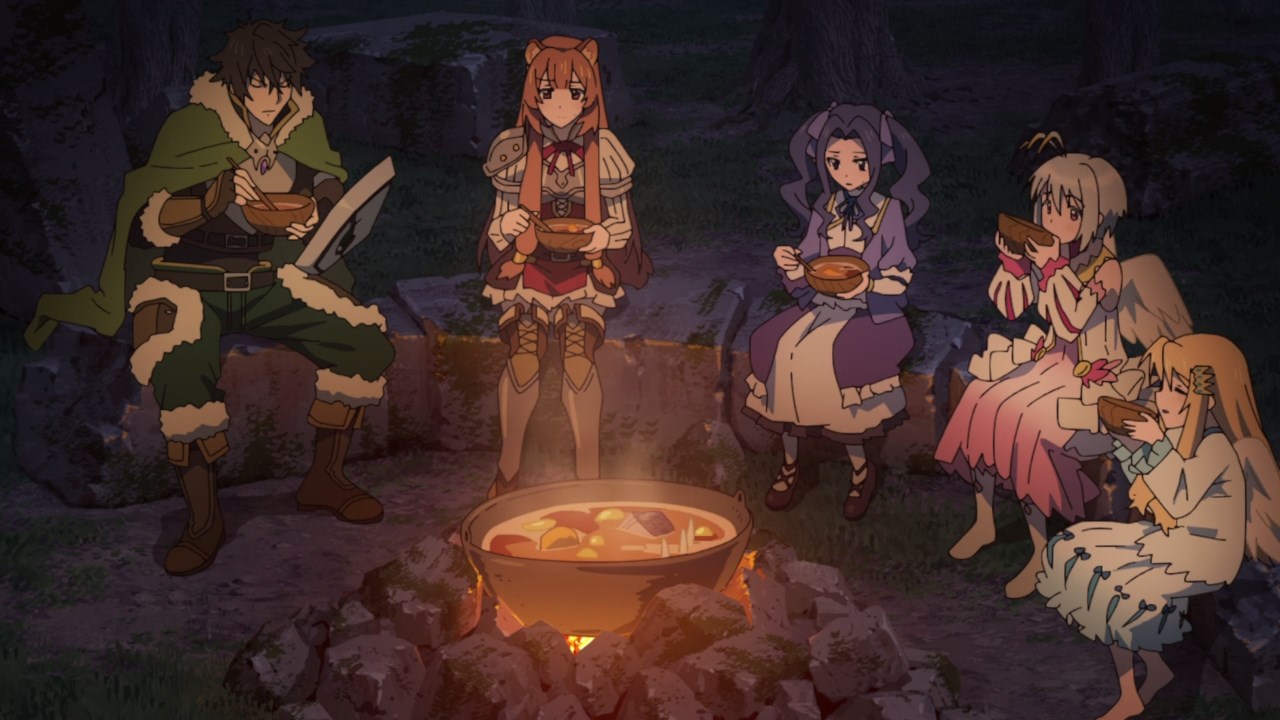 Well, they’ll decided to use the tyrannosaurus meat and cook it since Naofumi and the rest are hungry after rescuing Van Reichnott and the rest of the demi-humans from Idol Rabier’s mansion. 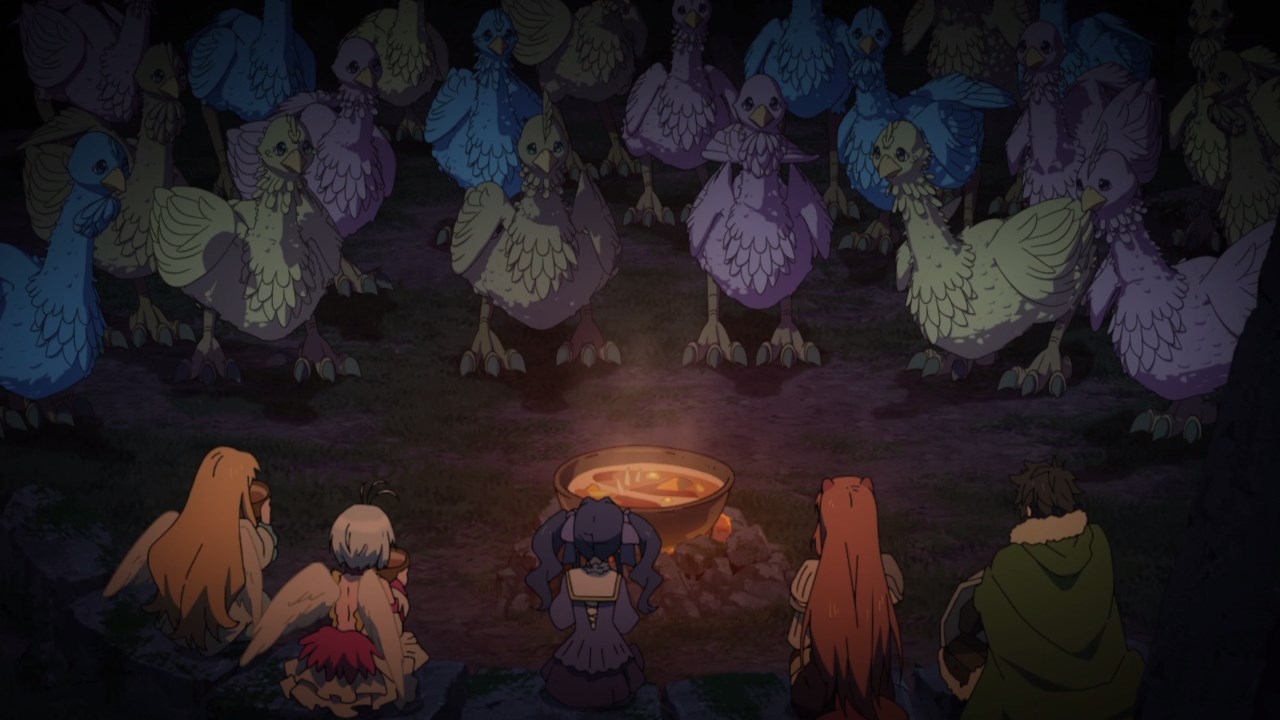 Then again, it appears that these filolials are hungry too after seeing Naofumi and the rest eating some tyrannosaurus stew.

Well then, looks like the Shield Hero will have to cook a large batch just to feed all of the filolials! 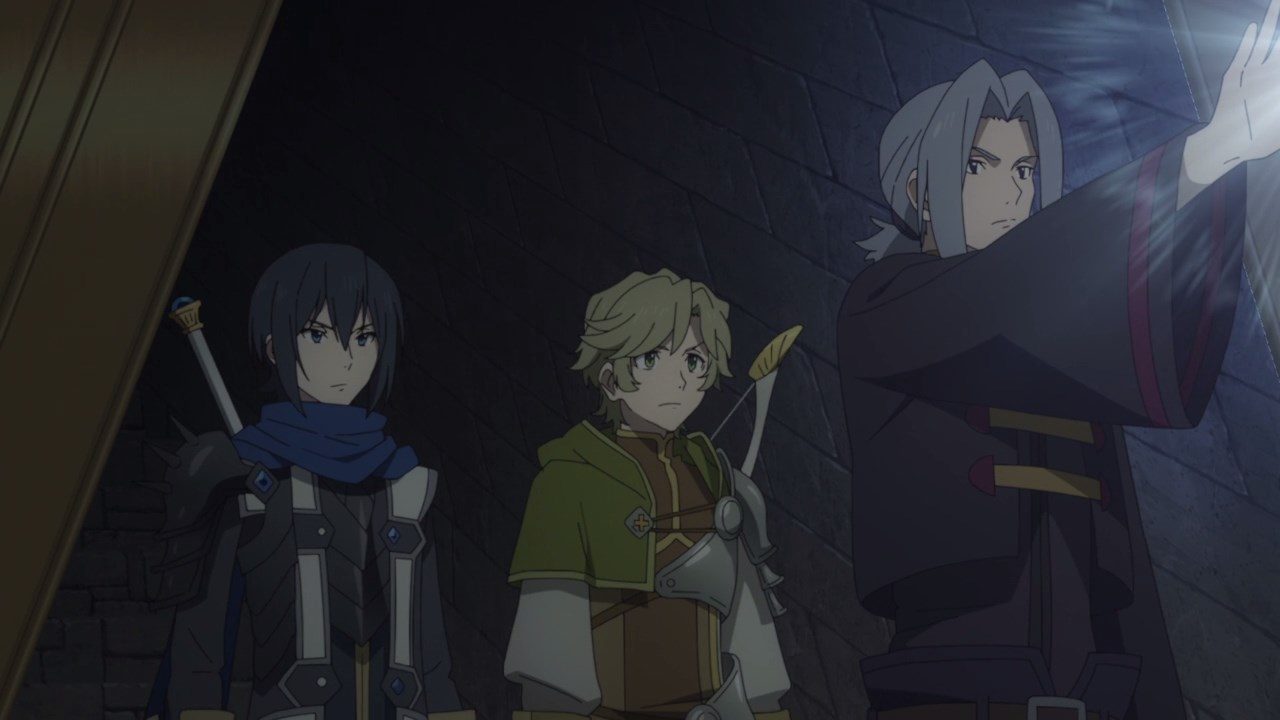 Back at the Melromarc Kingdom, both Ren Amagi and Itsuki Kawasumi went to the underground library where they heard about the legendary weapons. Thus, the Sword and Bow Hero decided to check it out in order to find some valuable information on its location.

Strangely though, the Spear Hero is nowhere to be seen. I wonder what Motoyasu Kitamura and his party up to? 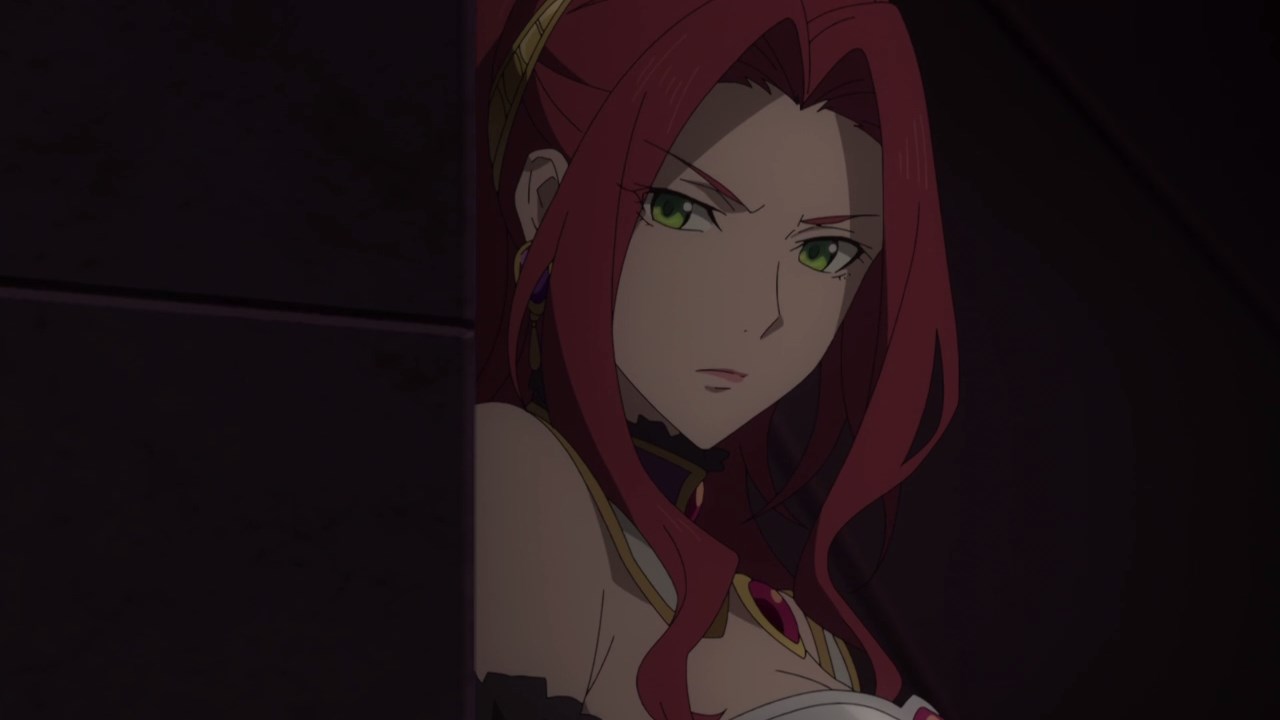 More importanly, I wonder why Princess Malty is doing in the library? Is she worried that her dirty secret will be exposed by the Cardinal Heroes? You know what, exposing her lies quickly will be better than keeping it hidden.

On the other hand, this library is owned by the Church of Three Heroes and I have a bad feeling that Ren and Itsuki might be in trouble. 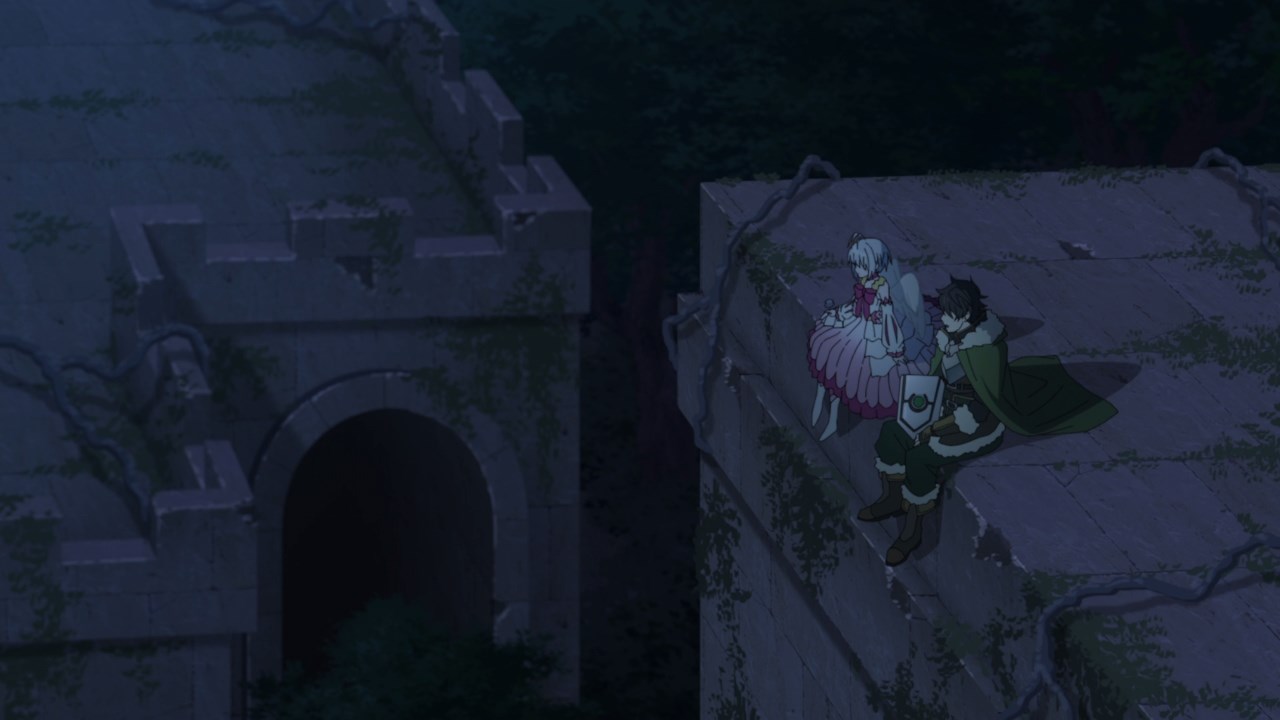 Now let’s go back to Naofumi Iwatani and Fitoria where she told the Shield Hero about Cardinal Heroes being summoned in other contries apart from Melromarc Kingdom. Hmm, could it be that there are other heroes beside Naofumi? Then again, other kingdoms have decided that Ren Amagi, Itsuki Kawasumi, and even Motoyasu Kitamura will be designated as their heroes, so there’s no need for them to summon people from various worlds to fight.

But speaking of the Cardinal Heroes, Fitoria urged Naofumi to reconcile with the other heroes and work together in order to stop countless of Waves and then save the world from ruin. Of course, Naofumi told Fitoria that reconciling with the other heroes won’t be happening as everyone hates him… and you may thank Malty for that. 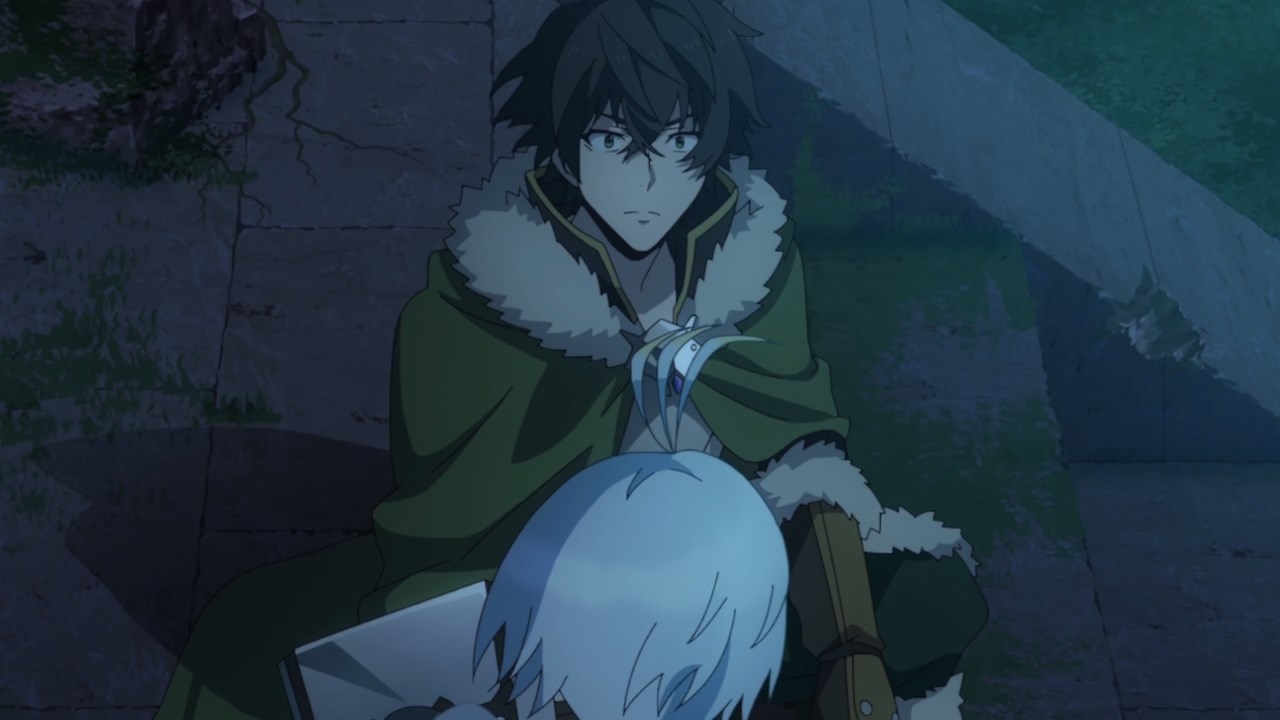 Anyways, looks like Fitoria heard enough of Naofumi’s story as she finally came up with a solution, which is to kill one of the Cardinal Heroes.

Wait a minute, don’t tell me that Fitoria is gonna kill the likes of Ren, Itsuki, and/or Motoyasu? On the other hand, is she gonna kill Naofumi too since he doesn’t want to cooperate? 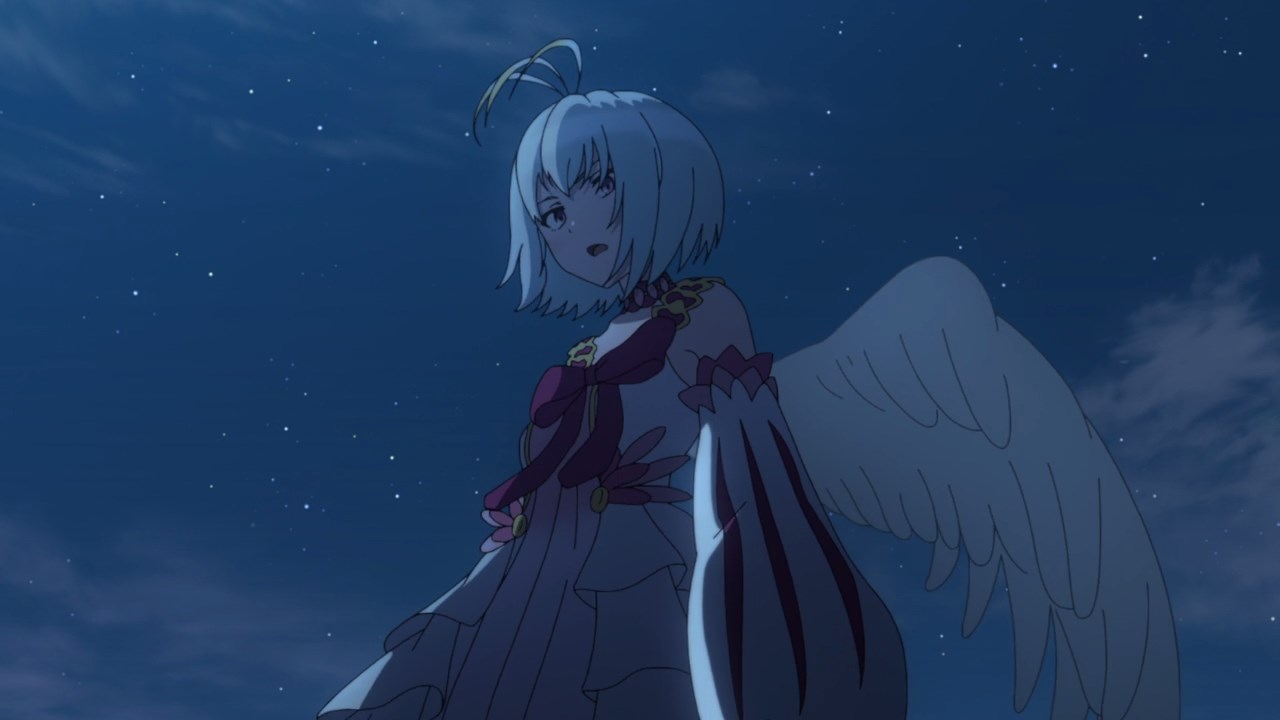 Regardless, I have a feeling that things will get ugly on the next episode as Fitoria will do anything to force these heroes to cooperate, even as far as sullying her hands in order to make it happen. Let’s hope that Naofumi and his party will survive from Fitoria’s wrath!