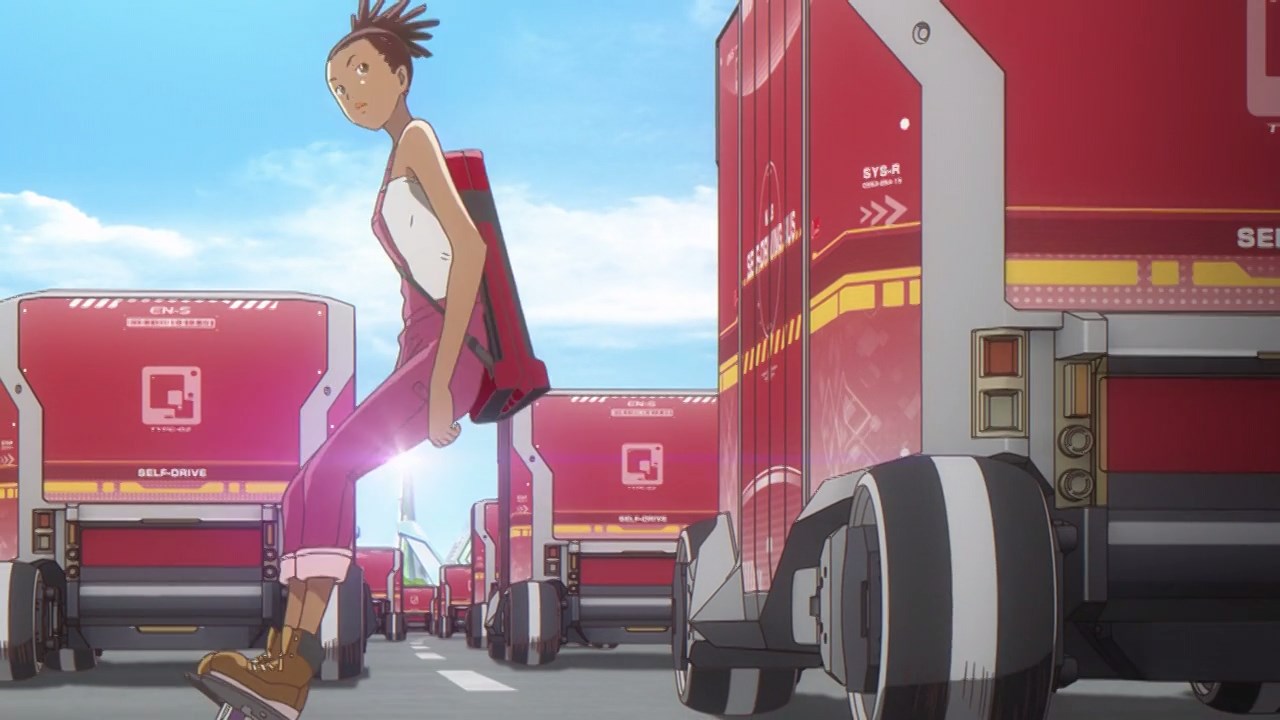 This is Carole, an orphan who take various part-time jobs to survive in this bustling metropolis called Alba City. 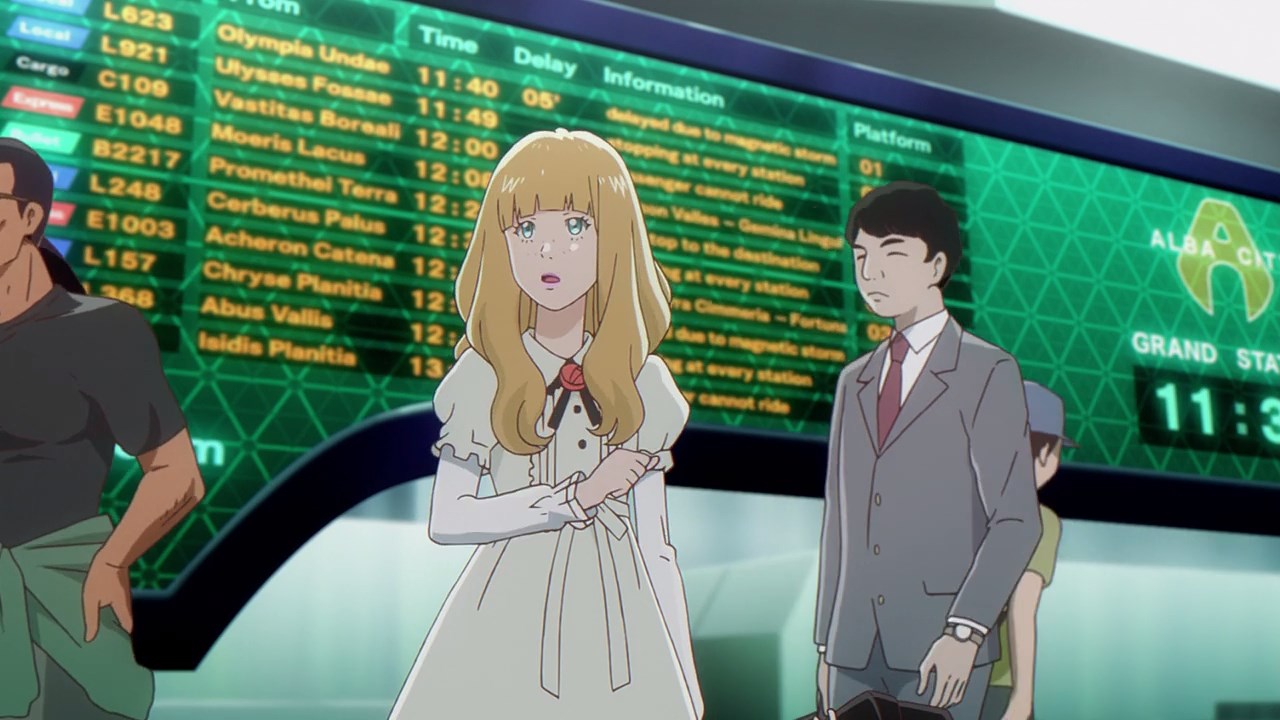 And this is Tuesday, an upper-class country girl who ran away from Hershell to achieve her dreams in the big city. 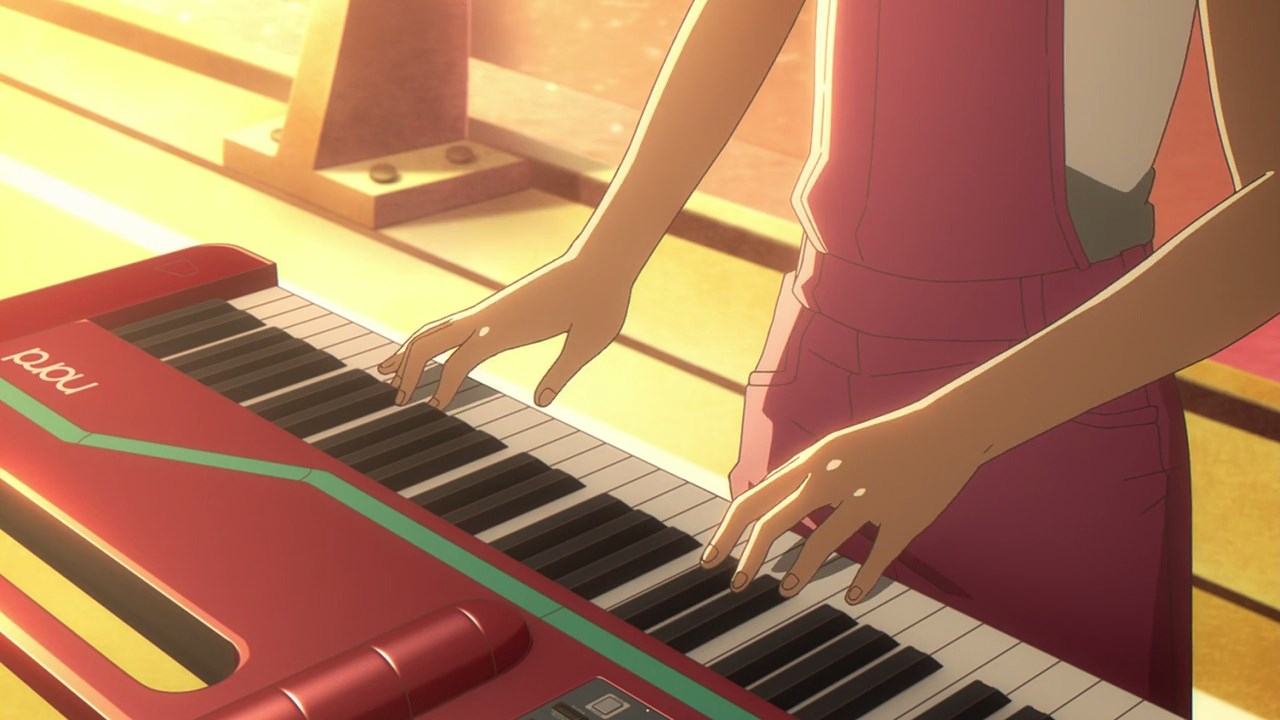 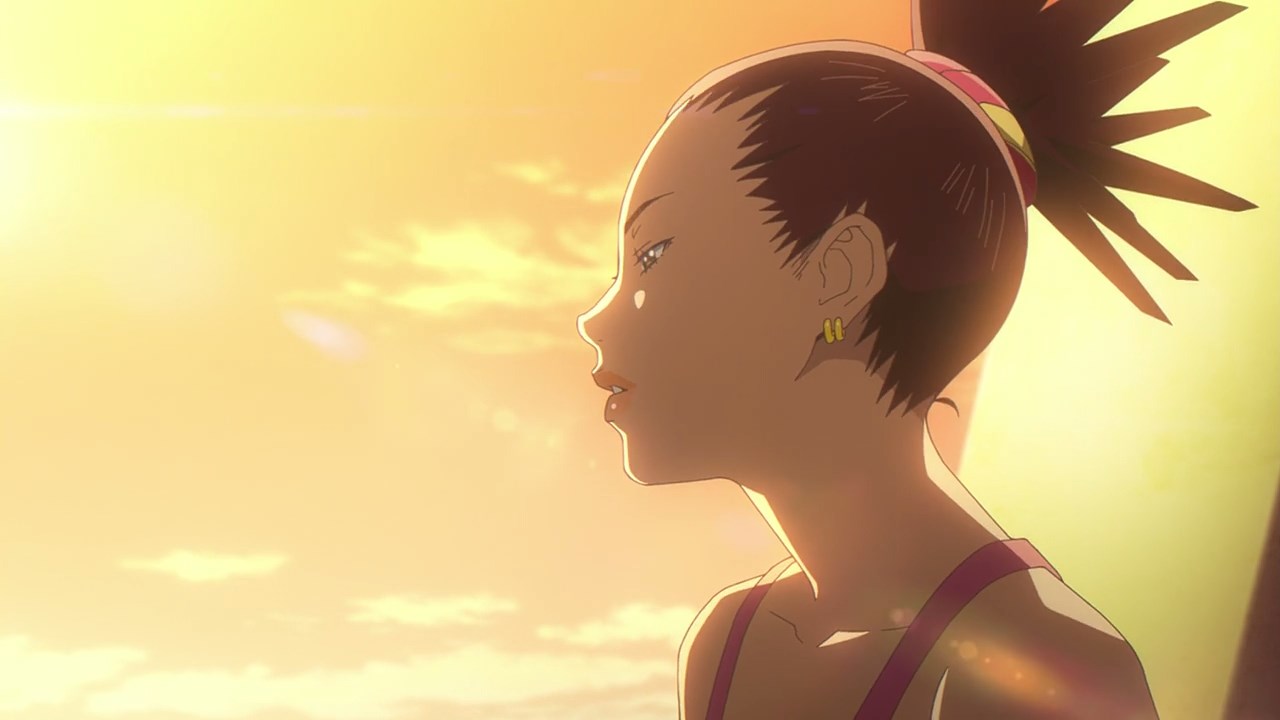 Oh yeah and speaking of Carole, she loves to play her keyboard that she vents out her emotions through music. Of course, no one will pay attention to Carole’s music since they’re busy with mundane things. 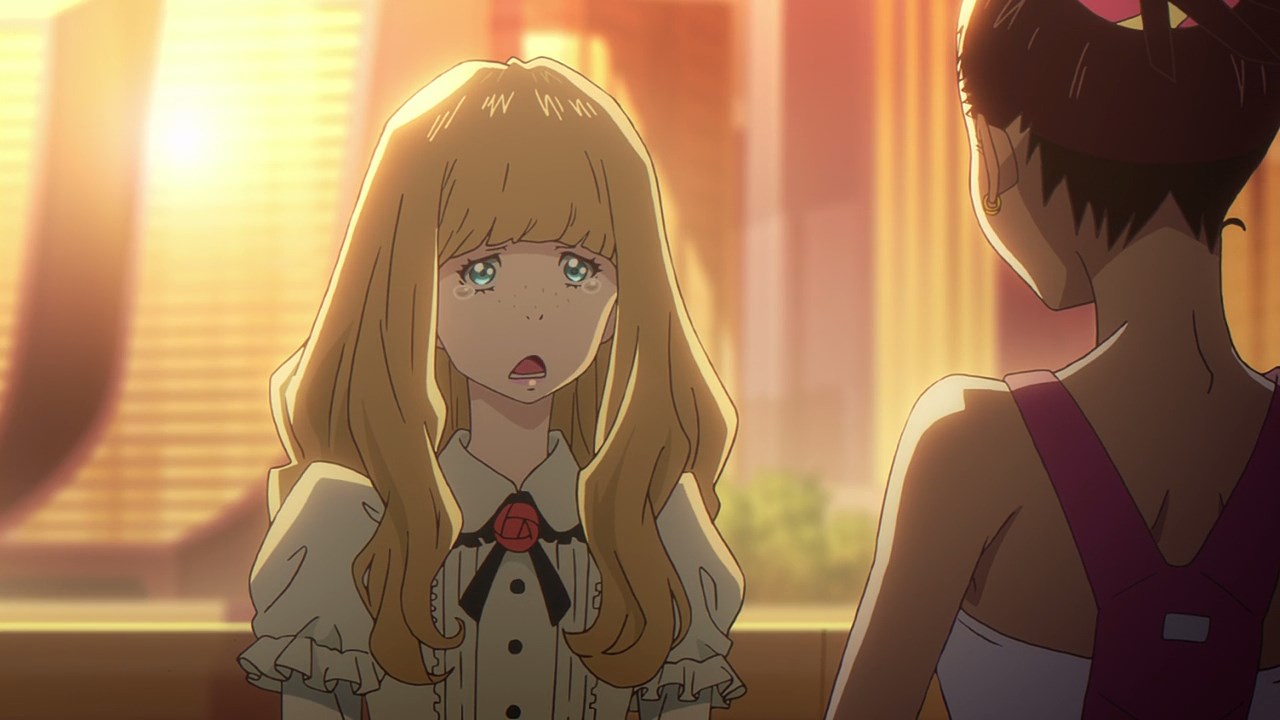 Well, except for Tuesday in which Carole’s keyboard performance reminds her of the time she heard an old song called “True Colors” by Cyndi Lauper. That song inspires Tuesday to achieve her dreams of becoming a musician.

Anyways, this is Carole and Tuesday, an original anime show by BONES which the story is set 50 years after humanity emigrated to Mars. Of course, it’s the story of two young girls who wanted to not only achieve their dreams but possibly change the planet through their music. Oh yeah, and this show is created as a milestone celebration for not only the anime studio, but also Flying Dog in which the record label was formerly known as JVC Entertainment before they took the current moniker more than 10 years ago. 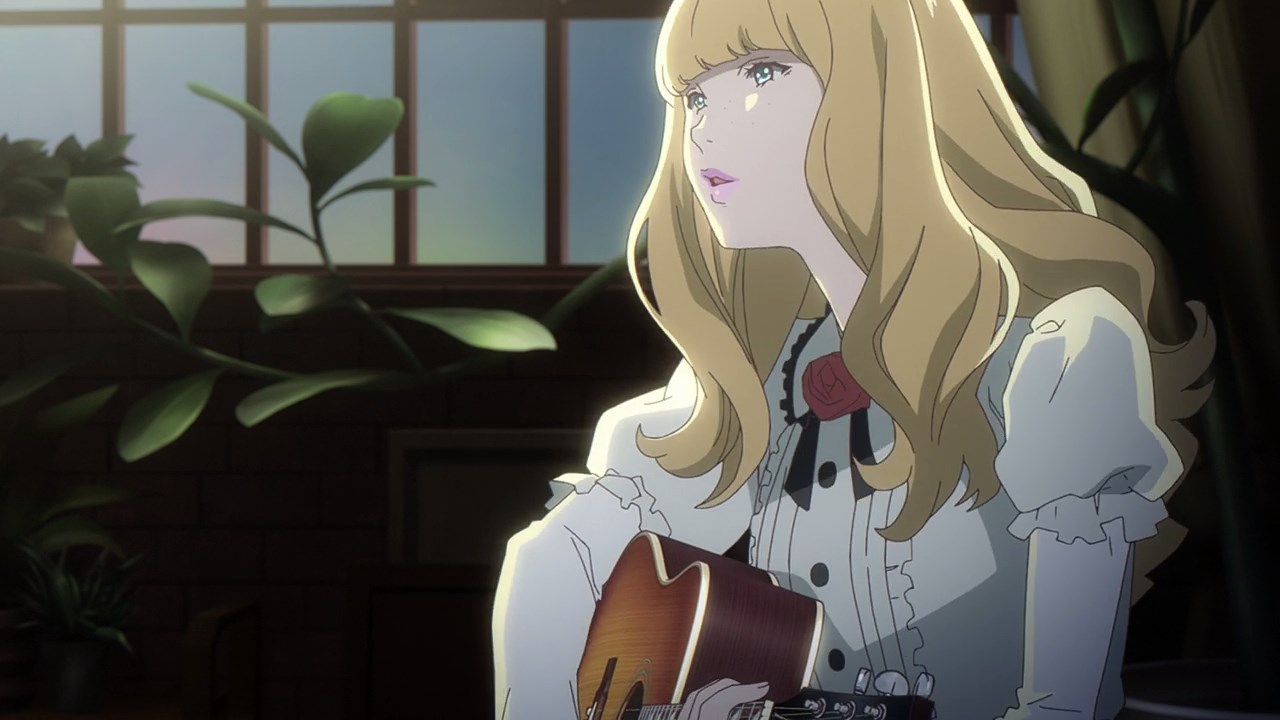 With that said, Carole let Tuesday stay at her apartment since it’s dangerous to leave this rich country girl alone. But thanks to Carole, this is where the magic happens as Tuesday took her Gibson guitar named Hummingbird and plays it. 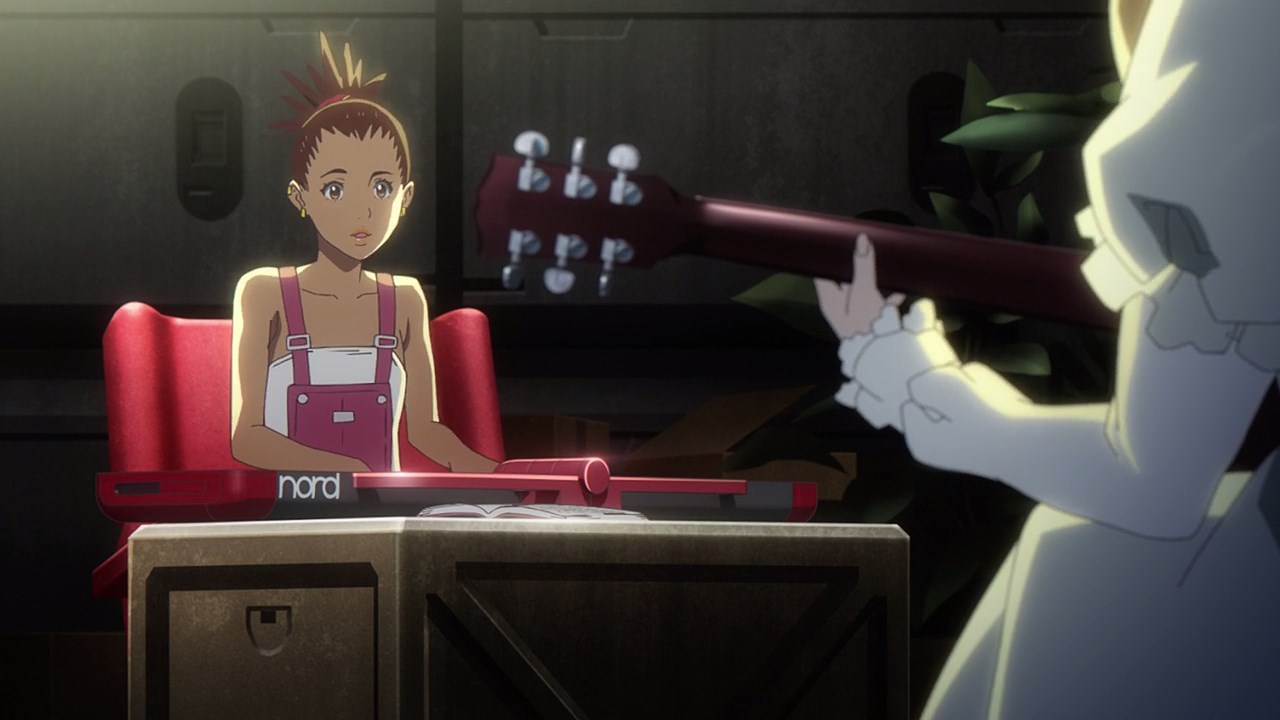 Eventually, both girls made a song together and man, they have a blast making it as Carole and Tuesday created a song titled “Loneliest Girl”. Sure that it’s a simple song, but they pour their hearts onto it. 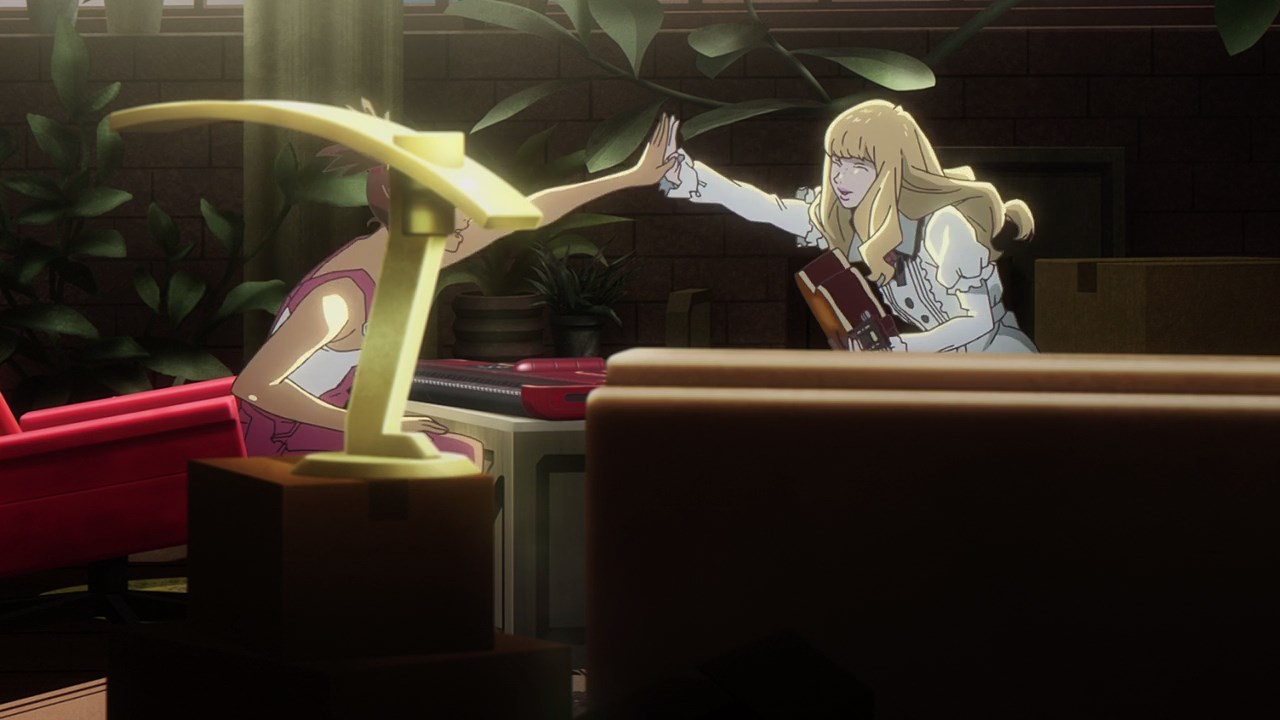 Anyways, I feel that it’ll be a start of a great friendship between Carole and Tuesday and I’m sure that they’ll make good music together now that they finished making their first song. 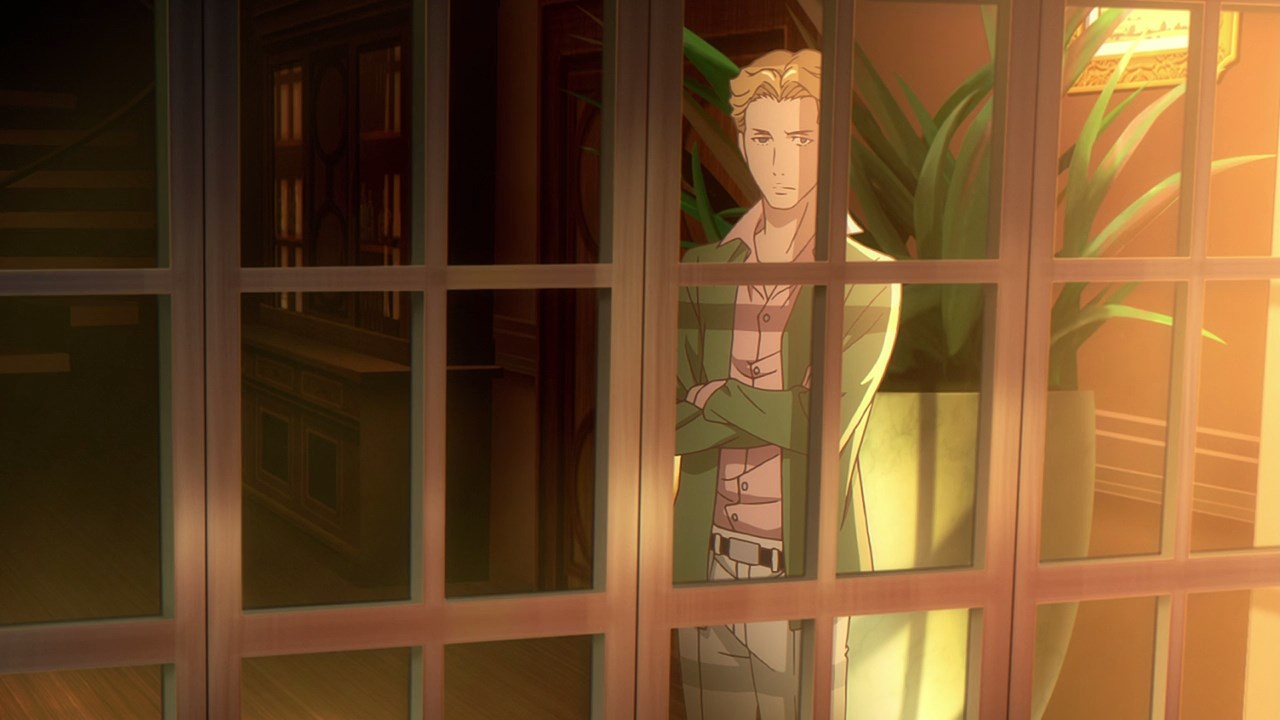 Back in Hershell, it appears that the Simmons family are in an uproar due to Tuesday’s disappearance. Although Spencer knows that Tuesday went to Alba City to fulfill her dreams, he’s worried that some criminals might kidnap his little sister. 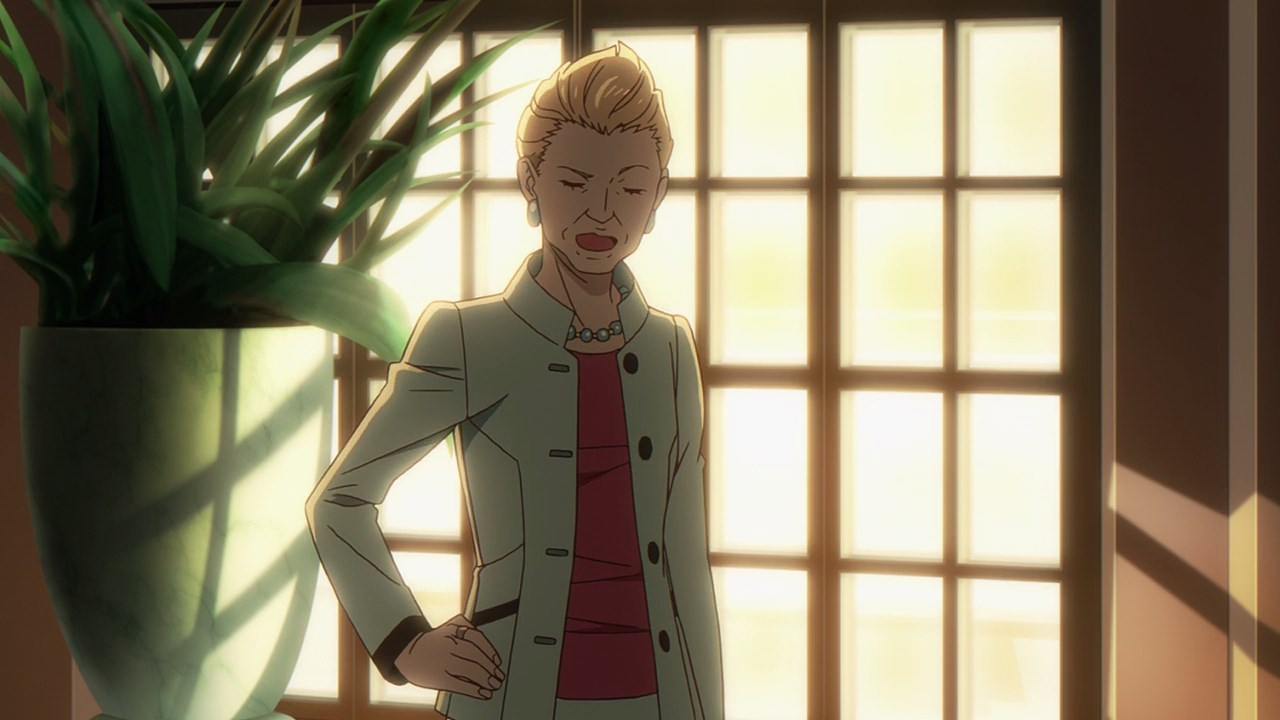 But, the only family member who’s deeply worried about Tuesday is her mother Valerie who complains on why she went to the city when Tuesday has everything back home.

Oh, and it’s not like she’s worried about her daughter’s well-being, but rather her reputation since she’s running in the next presidential elections. So yeah, Mrs. Valerie Simmons doesn’t want her image ruined by her daughter getting into trouble. 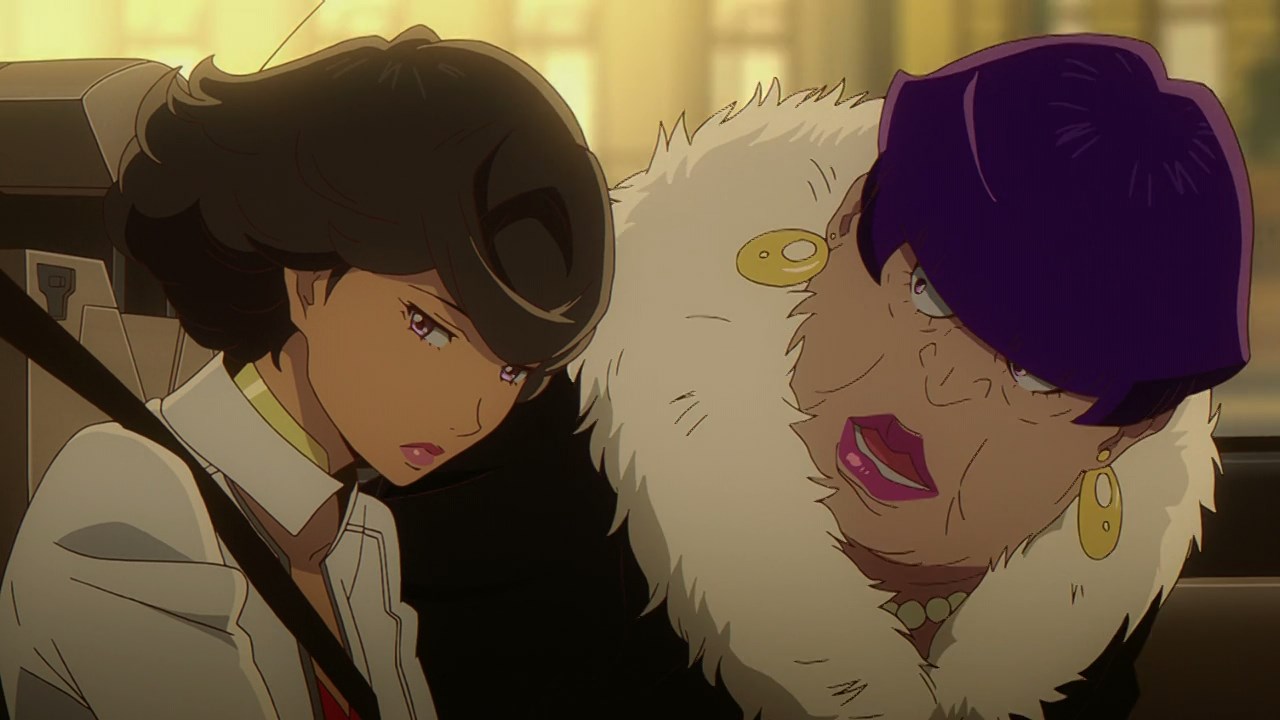 Also, we have some new characters introduced who wanted to get into the music industry like Angela Carpenter for example. While she’s a successful child actress, Angela’s popularity is starting to wane that her mother Dahlia wants Angela to pursue her career as a singer.

Of course, the music industry is dominated by AI that it’s hard for a human being to enter into the music charts, regardless of having a beautiful voice or not. Then again, I don’t know if Angela can sing. 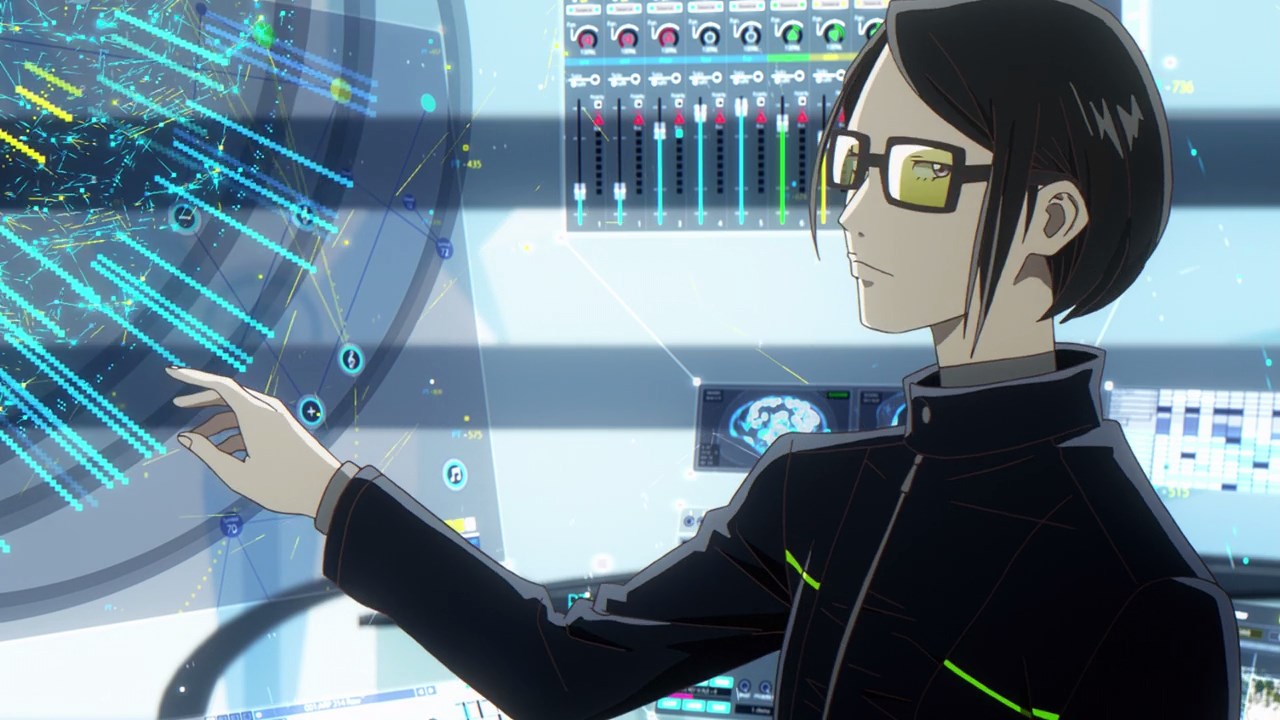 That’s where Dahlia found a person who can help her daughter. This is Tao, a music engineer who created various hits thanks to his AI technology.

Now while he won’t mind creating a song just by analyzing various songs of the past just to make one (as long as you can pay lots of cash), it’s a tough challenge for Tao to turn Angela into a singer since he only cares about machines. But you know what, I think he’ll be fine making Angela into a diva… 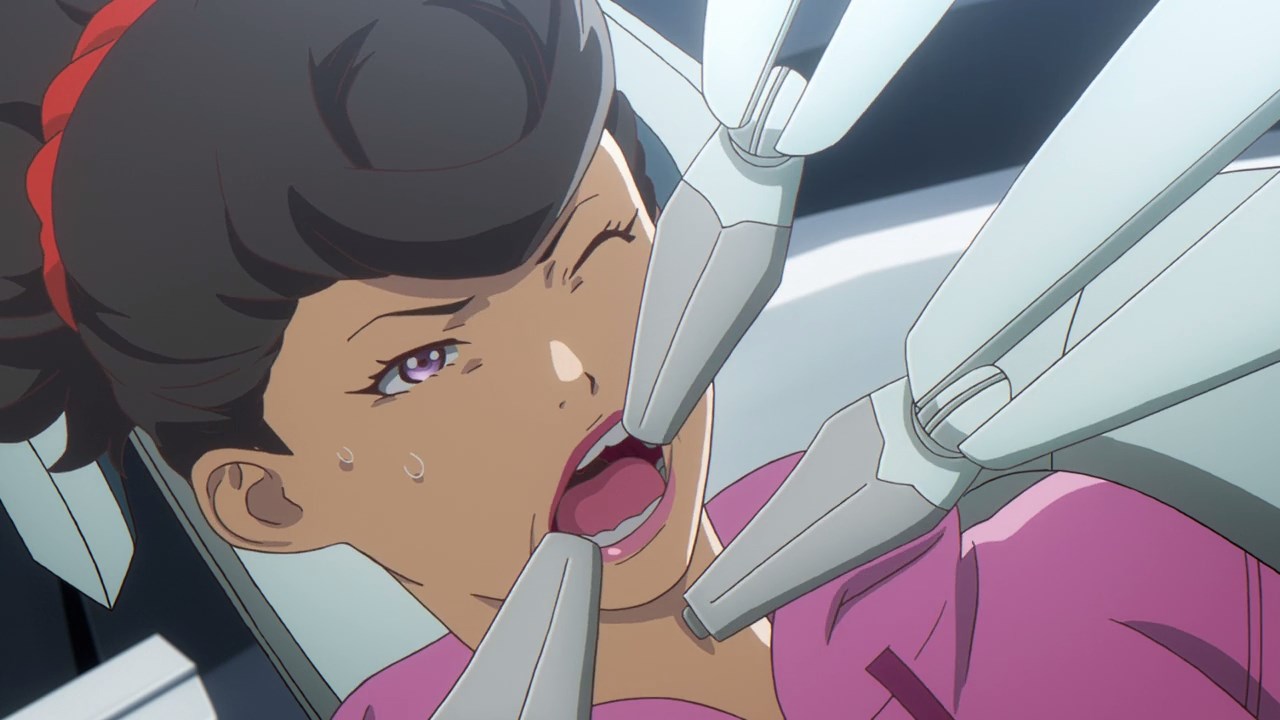 …even if it means doing intensive surgery towards the child star. Yeah, seems that Angela is horrified that she might not survive this tortuous experiment from Tao. 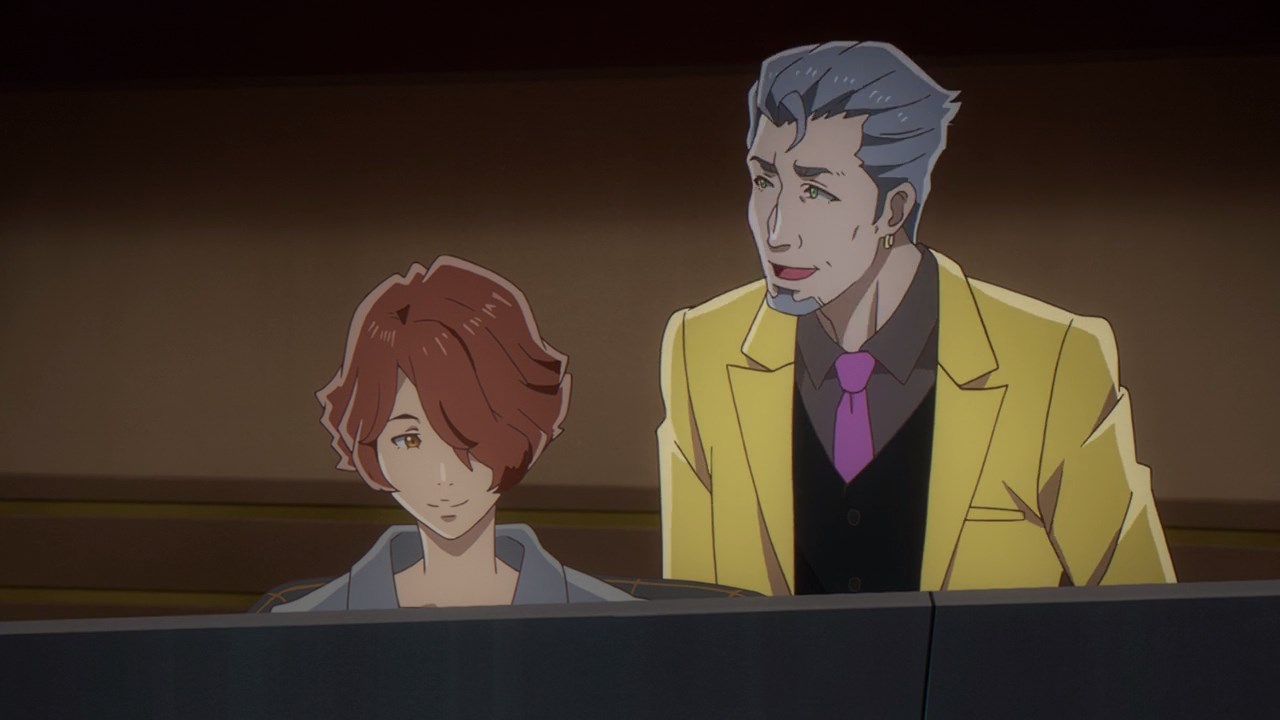 Also, here’s another musician who uses AI to make music. Joined by his assistant Roddy, DJ Ertegun is a famous musician who makes music thanks to the power of technology. But the truth is that Roddy takes care of the AI work. 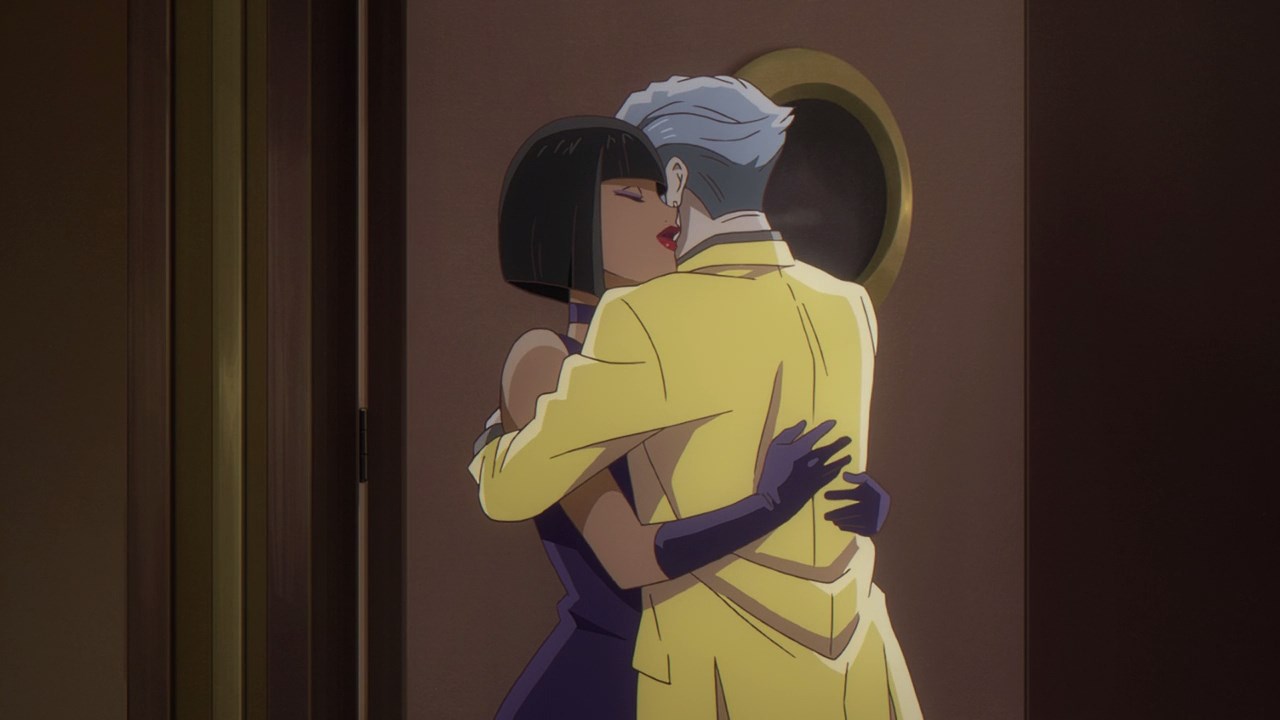 This means that he spends more time with the ladies rather than writing his own songs. I mean, you don’t need to make music from scratch when machines will do it for you.

Then again, it’s plain wrong for machines to create songs for them as it feels soulless when you hear those songs. 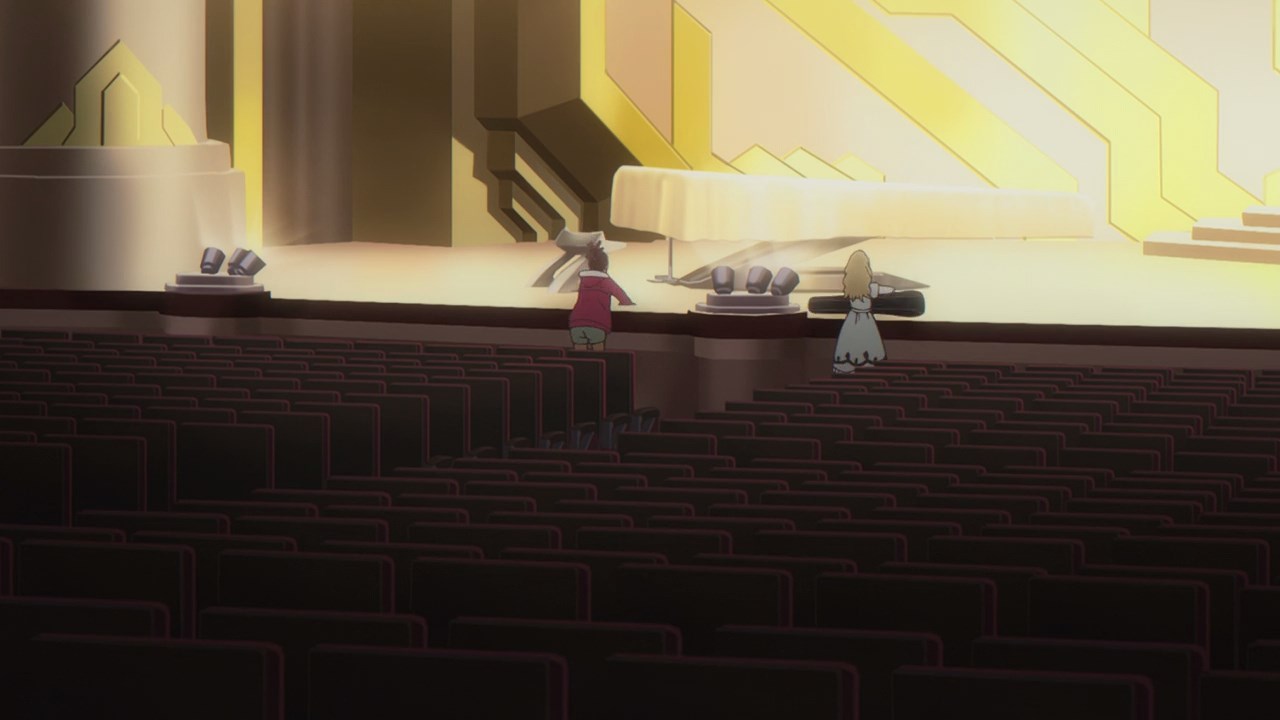 On the other hand, seems that Carole and Tuesday sneaked into the music hall as Carole wants to play it on a real piano. Of course, they might get into trouble once the guards caught them. 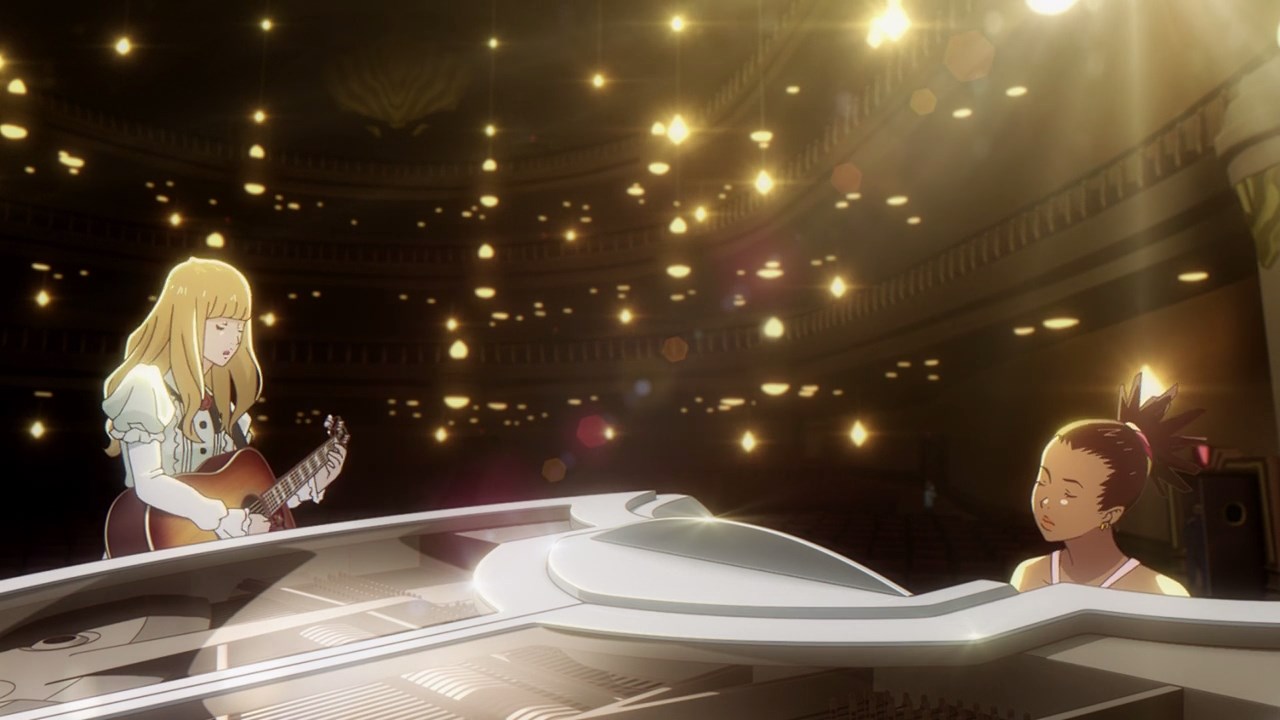 But, both girls decides to perform it anyway and man, it’s sucks that only those who are inside the hall will see Carole and Tuesday’s impromptu concert. 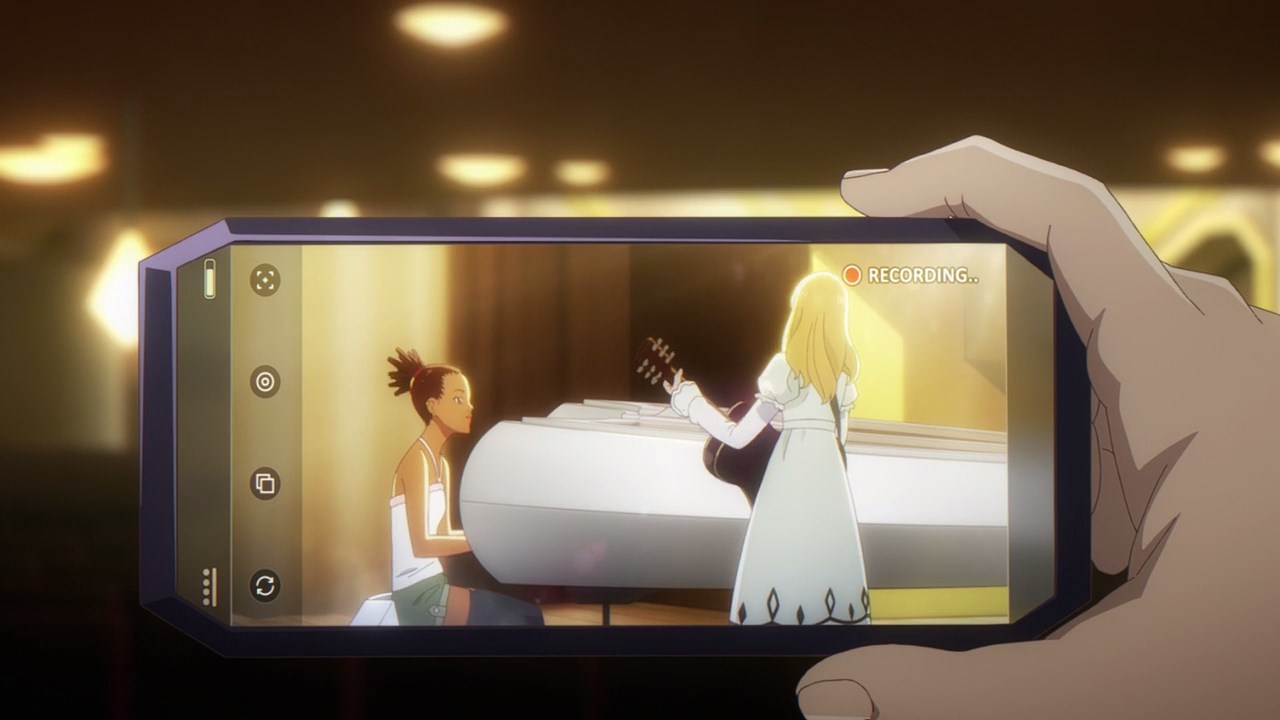 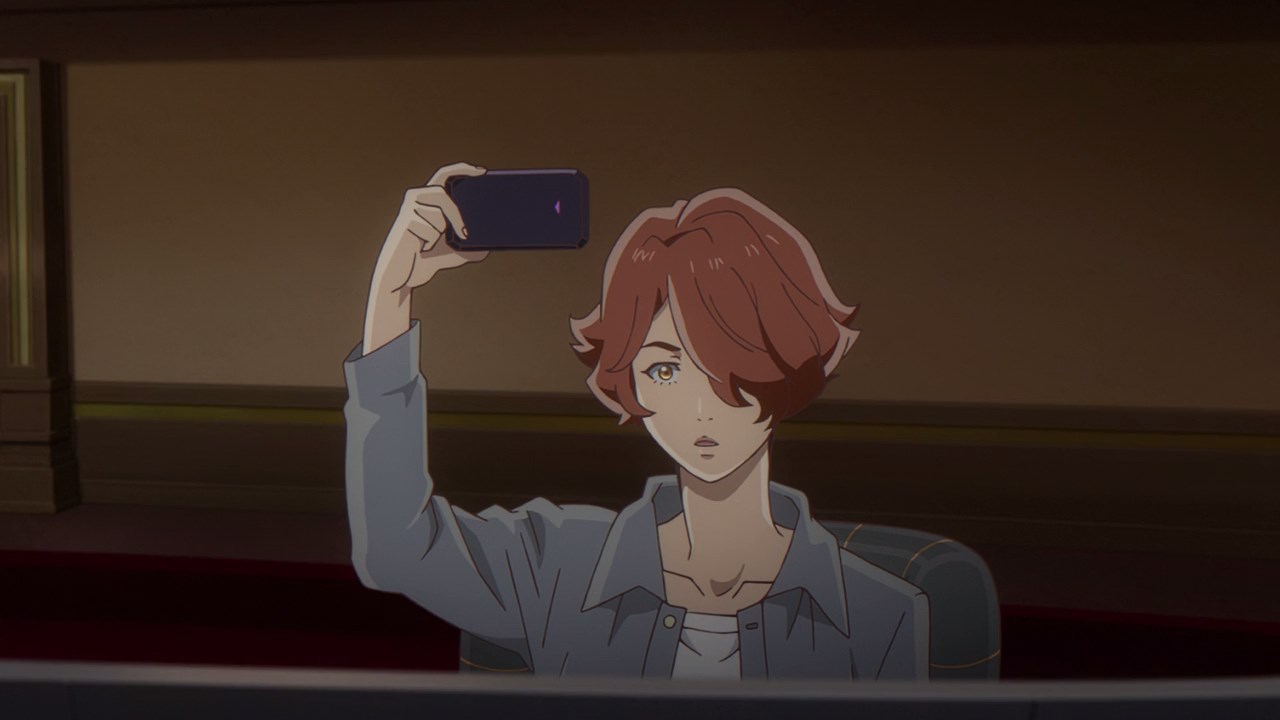 Actually, it appears that Roddy decides to capture this rare moment through his cellphone and possibly post it online so that everyone would watch it and click that “like” button! 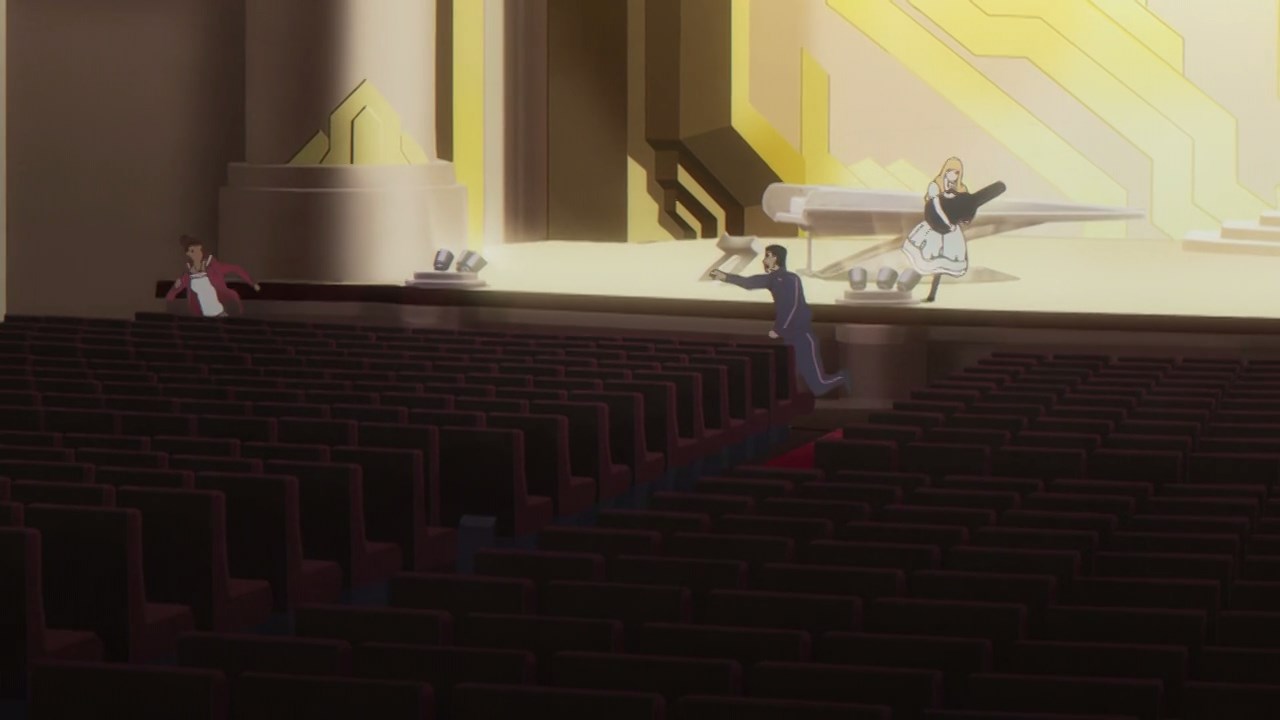 Of course, their impromptu performance will have to end when the guards showed up and tries to capture both Carole and Tuesday. Fortunately, they got away safely.

But thanks to Roddy capturing that moment from his cellphone, it seems that Carole and Tuesday got some attention over the internet. 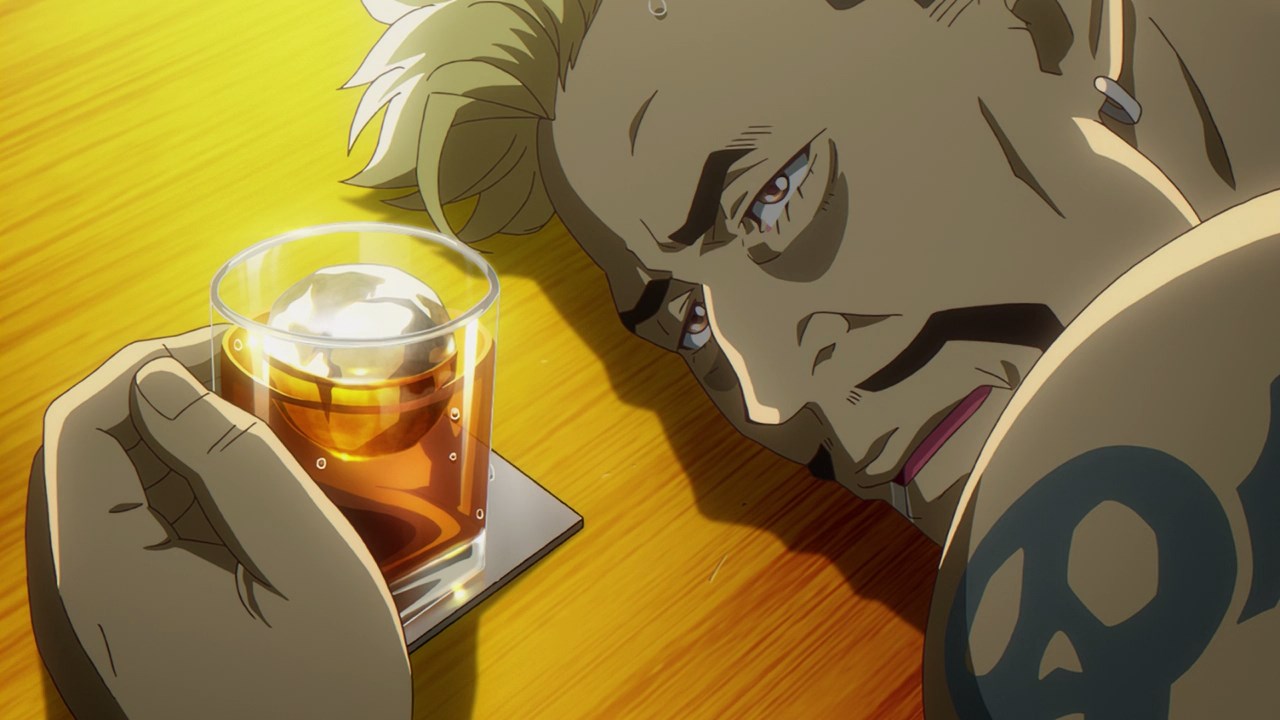 Including this drunkard named Gus Goldman, who woke up to hear something that’s different from the usual AI-produced music being played inside the bar. 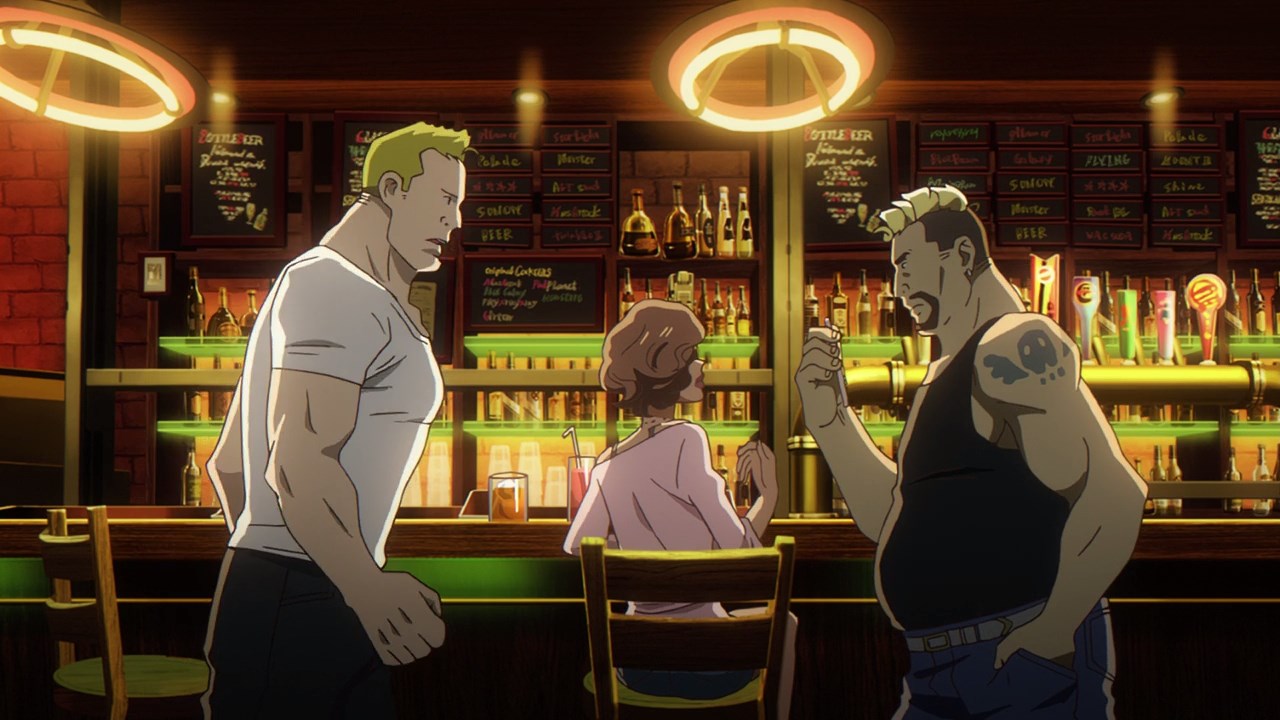 Anyways, Gus grabs someone’s phone and saw a video that Roddy posted earlier. Don’t worry, he’ll return it to the owner but man, Gus was surprised to see two girls playing at the music hall. 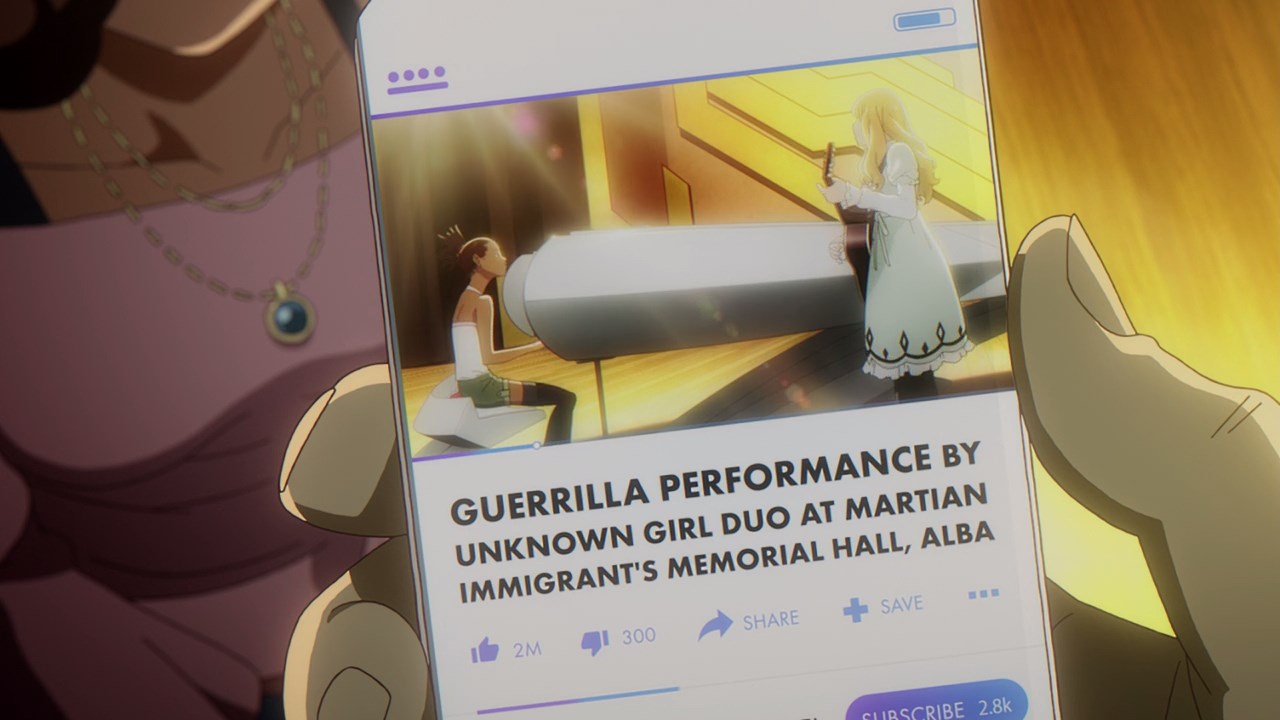 Then again, he doesn’t know who Carole and Tuesday is since they’re pretty much unknown to the entire planet of Mars. 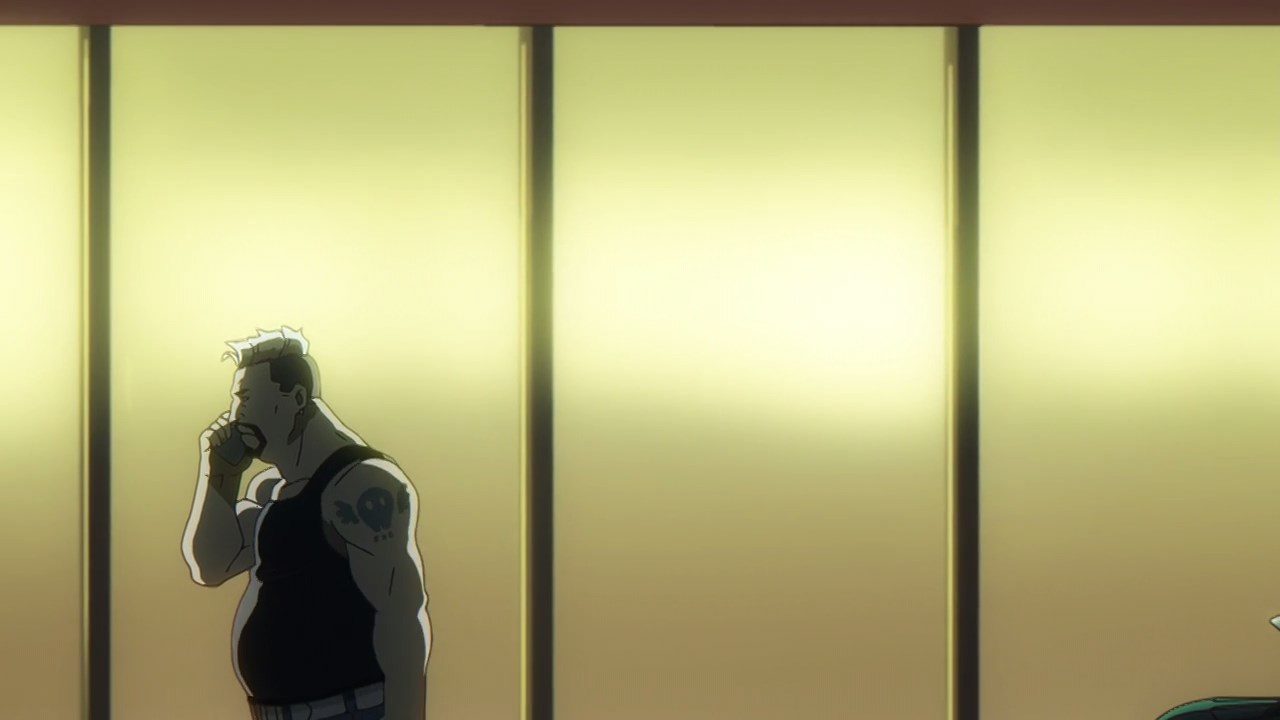 And so, Gus called Roddy and asked him about the identities of those two girls from that viral video. By the way, both Gus Goldman and Roddy are buddies, but I bet that DJ Ertegun doesn’t want to see Gus at his villa since he’s a nobody compared to him. 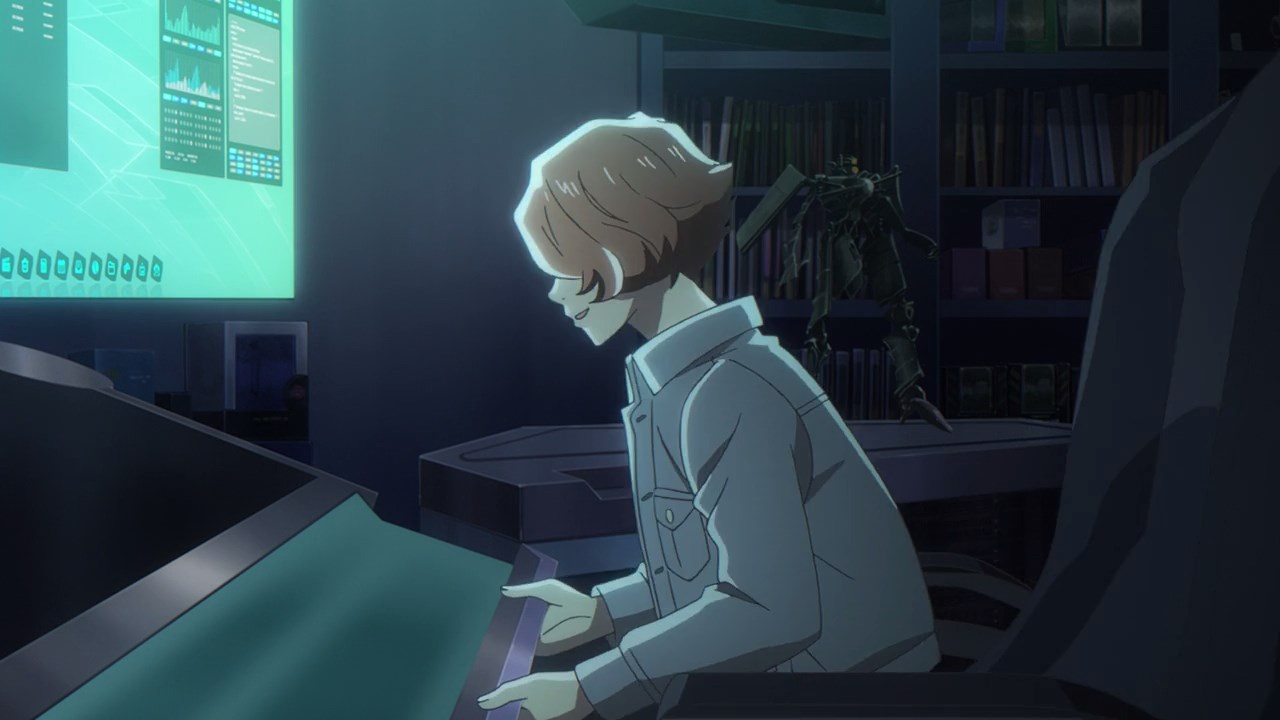 Fortunately for Gus, Roddy managed to find the indentities of both girls from the viral video. C’mon, he’s the brains behind DJ Ertegun’s performance so it’s no wonder why Roddy can easily identify both Carole and Tuesday. 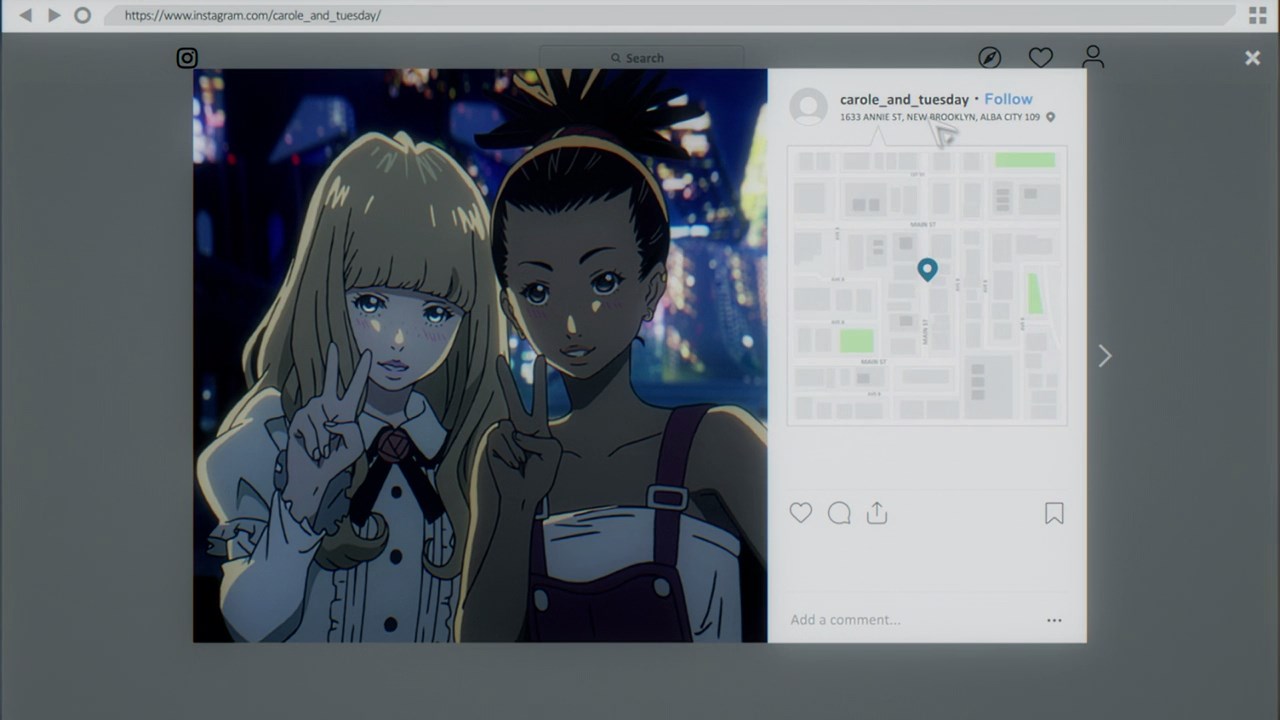 Oh, and it turns out that Roddy found those girls via their Instagram page. Wow, they have Instagram on this anime, but I wonder if they’ll have Twitter or various real-life social media applications in future episodes?

Anyways, Roddy told Gus that both Carole and Tuesday are living in an apartment in downtown Alba City. Good thing Roddy is the first one who located both girls ’cause had Valerie Simmons took that valuable information, her men might take Tuesday back to Hershell by force. 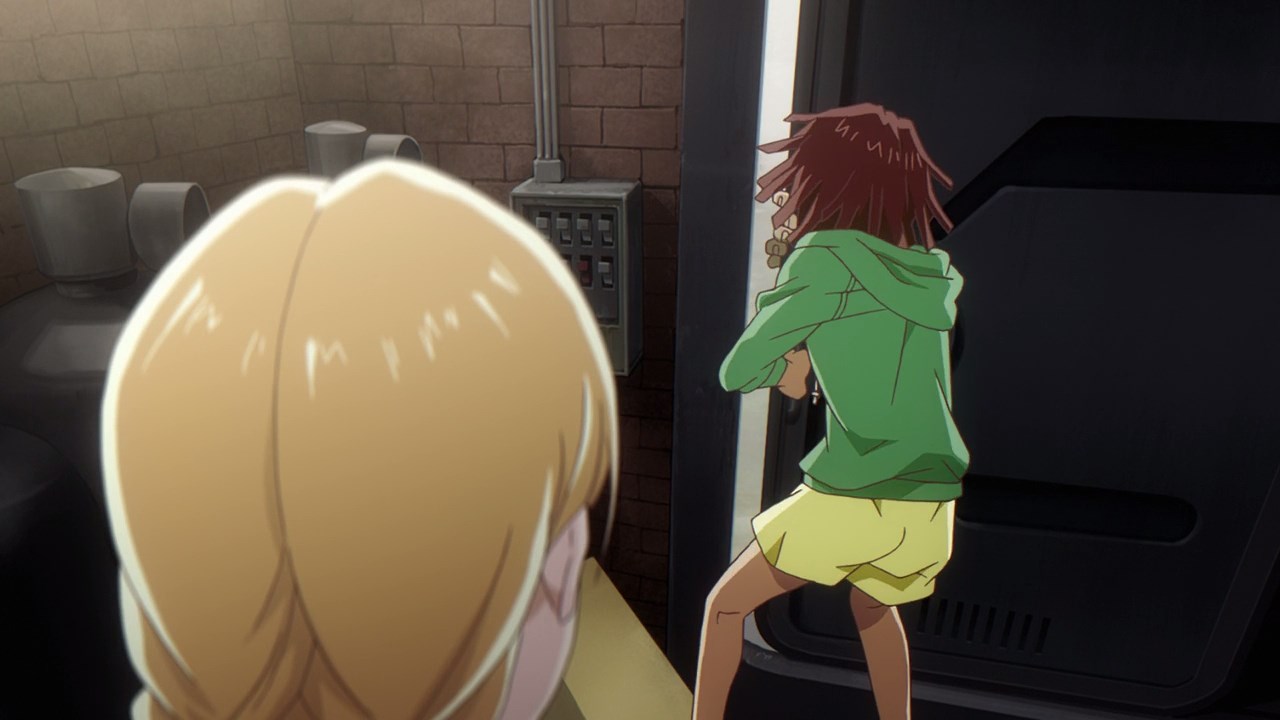 The next day, both girls will be in for a surprise as someone is knocking on their door. No, it’s not the police since they don’t want to bother rescuing a daughter of a presidential candidate. 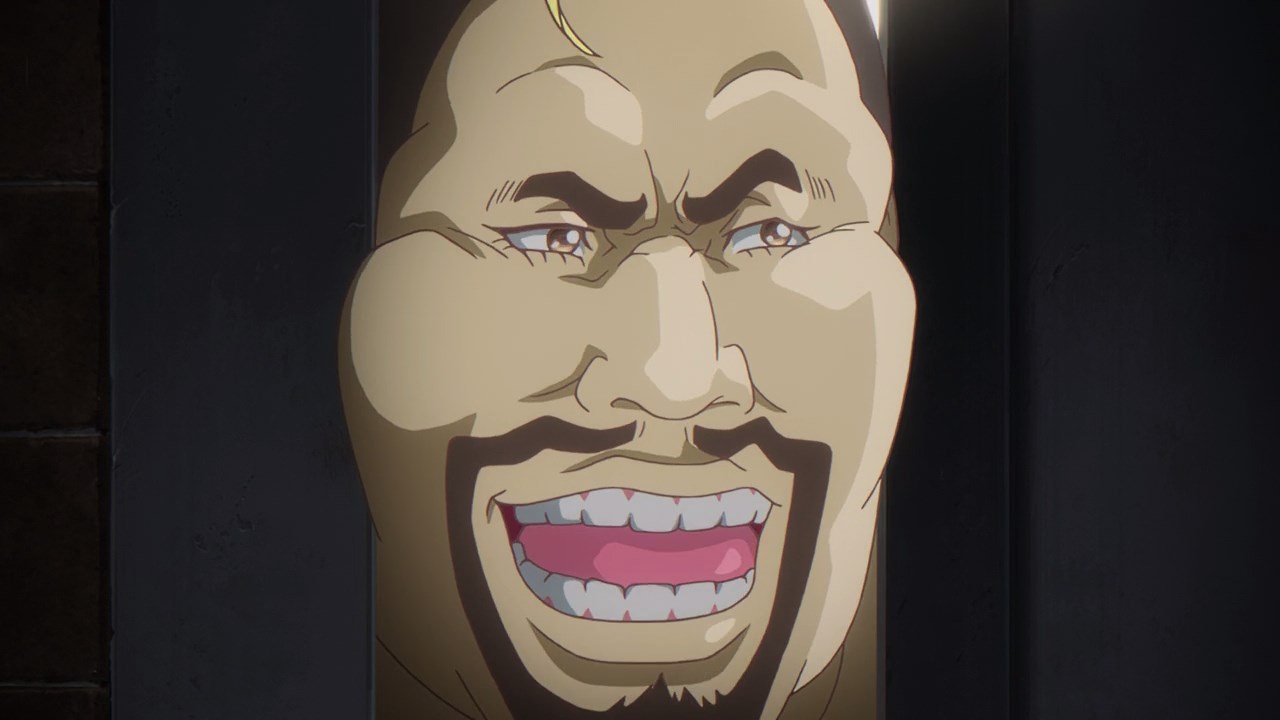 But rather, heeeeeere’s Gus! Shout-outs to BONES for taking this iconic scene from The Shining, but Gus Goldman is here and I have a bad feeling about this towards Carole and Tuesday. 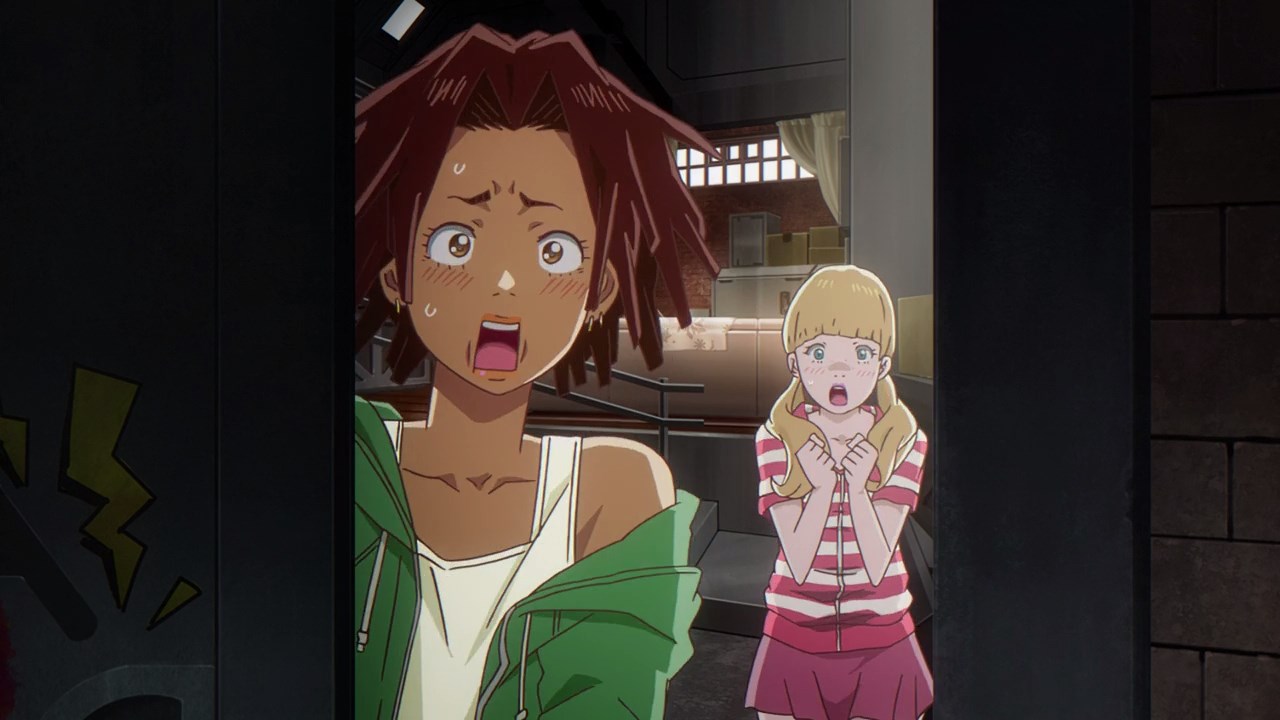 So yeah, that’s about it for the first two episodes of this anime series and man, I’m pretty much hooked on this one because I wanna see how far Carole and Tuesday will go from being nobodies to somebodies.

Anyways, I’m looking forward for the next episode and I hope Gus won’t do something bad to those girls!