The Rising of the Shield Hero Episode #21 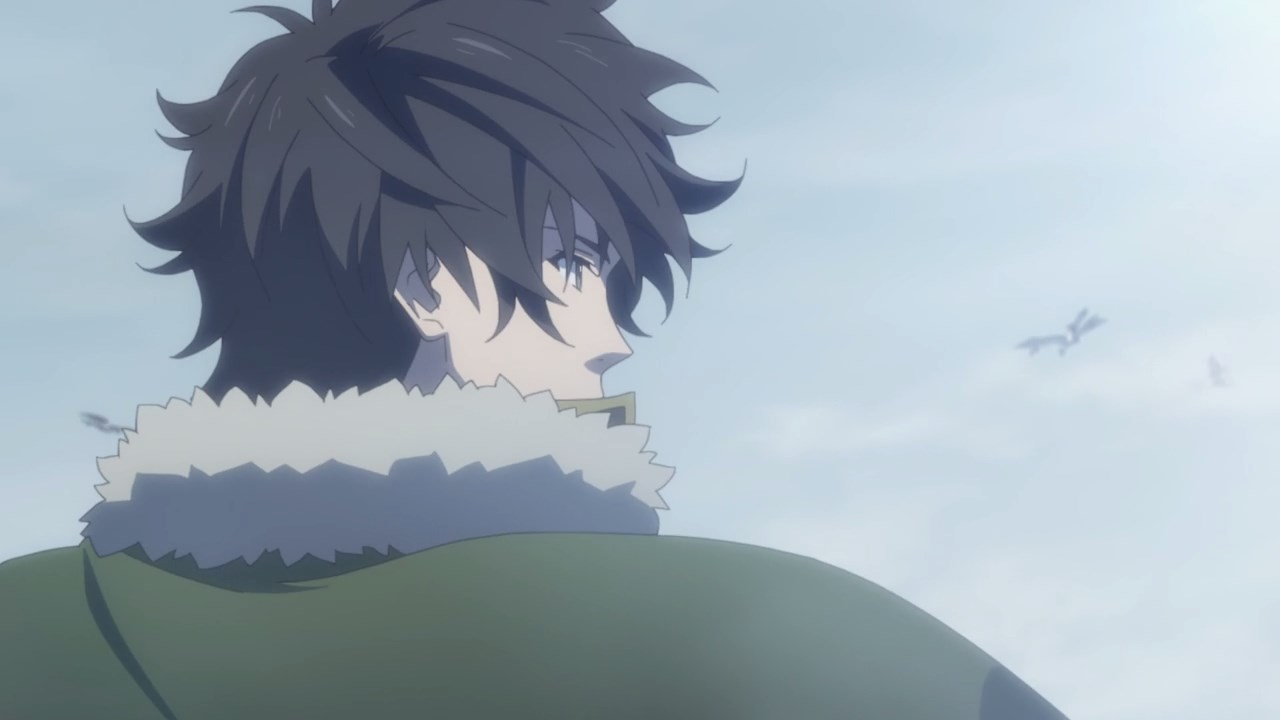 Naofumi Iwatani, the man who was falsely-accused for assaulting Princess Malty as well as being ridiculed for being the Shield Hero, is now at the crossroads between life and death after using Wrath Shield against Pope Balmus from the Church of Three Heroes.

Really, it’s gonna suck when Naofumi died before stopping the Waves of Catastrophe and returning to the real world safely. 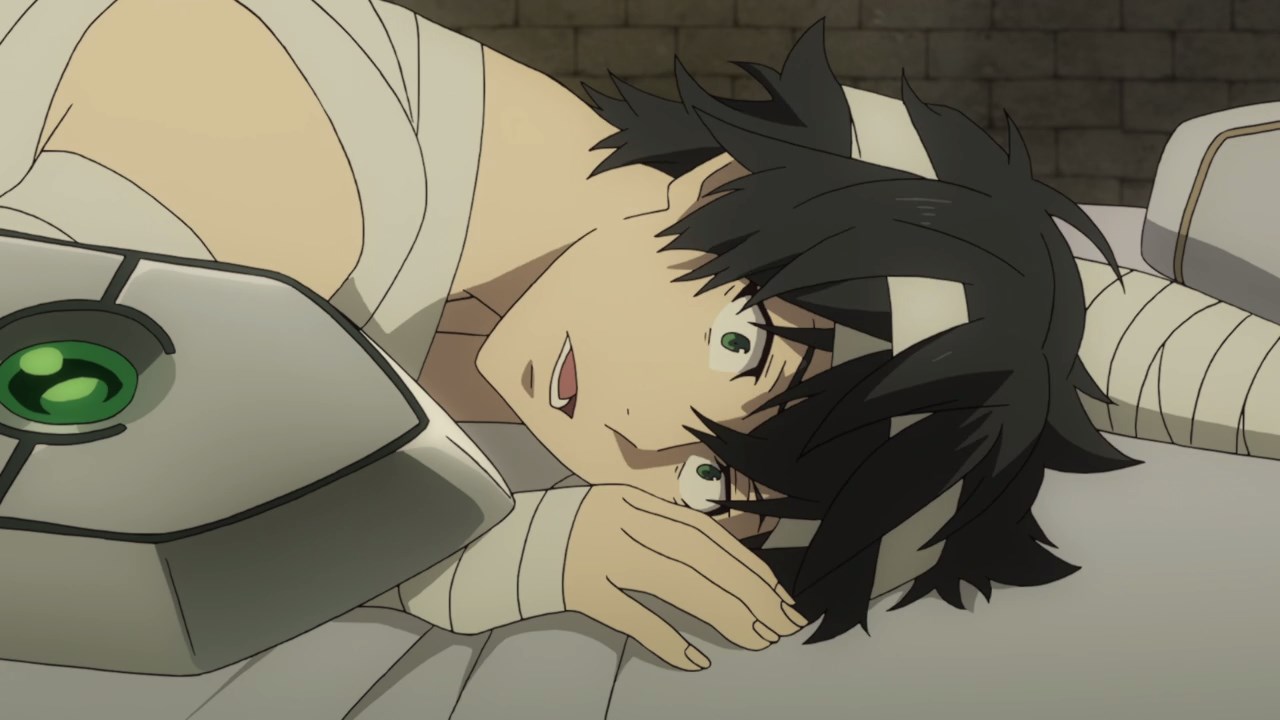 Just kidding, Naofumi is still alive, but it seems that he took a long nap after stopping the pope and his followers since his body is still aching from using Blood Sacrifice. 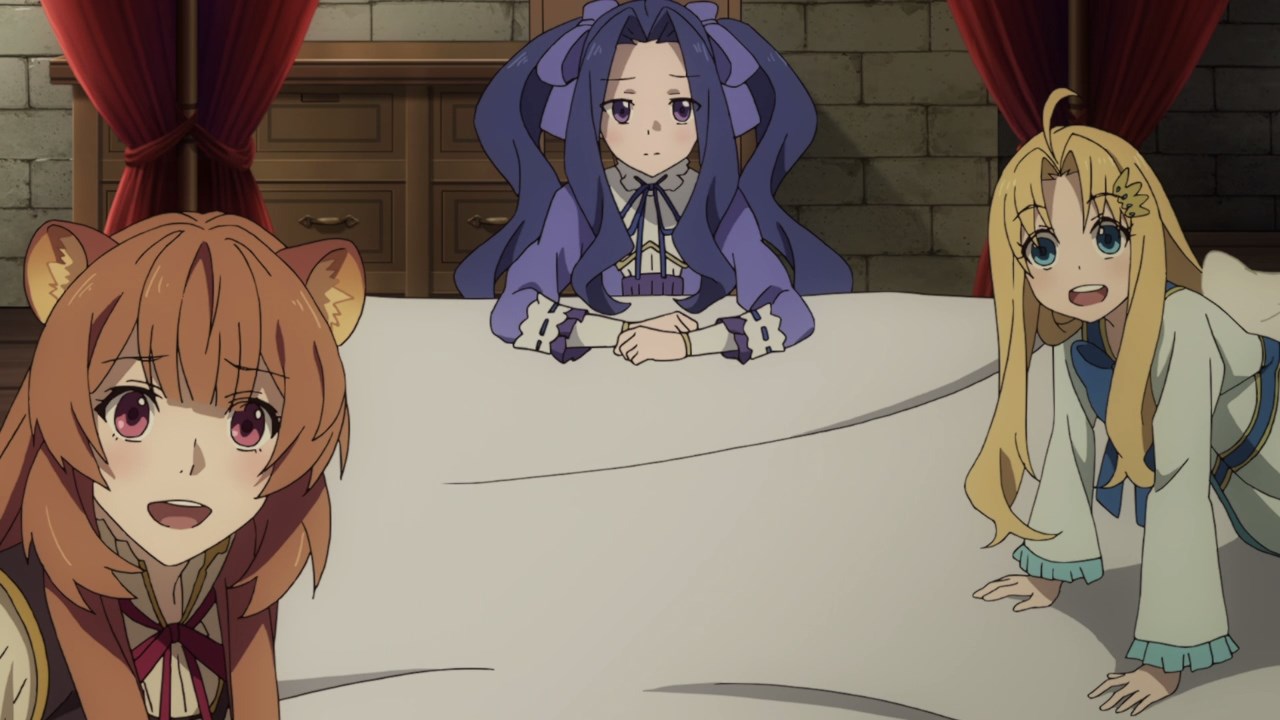 But hey, what’s important is that the Shield Hero is alive and everyone is happy to see Naofumi wake up from his slumber, including Raphtalia who is no longer afflicted by the zombie dragon’s curse. 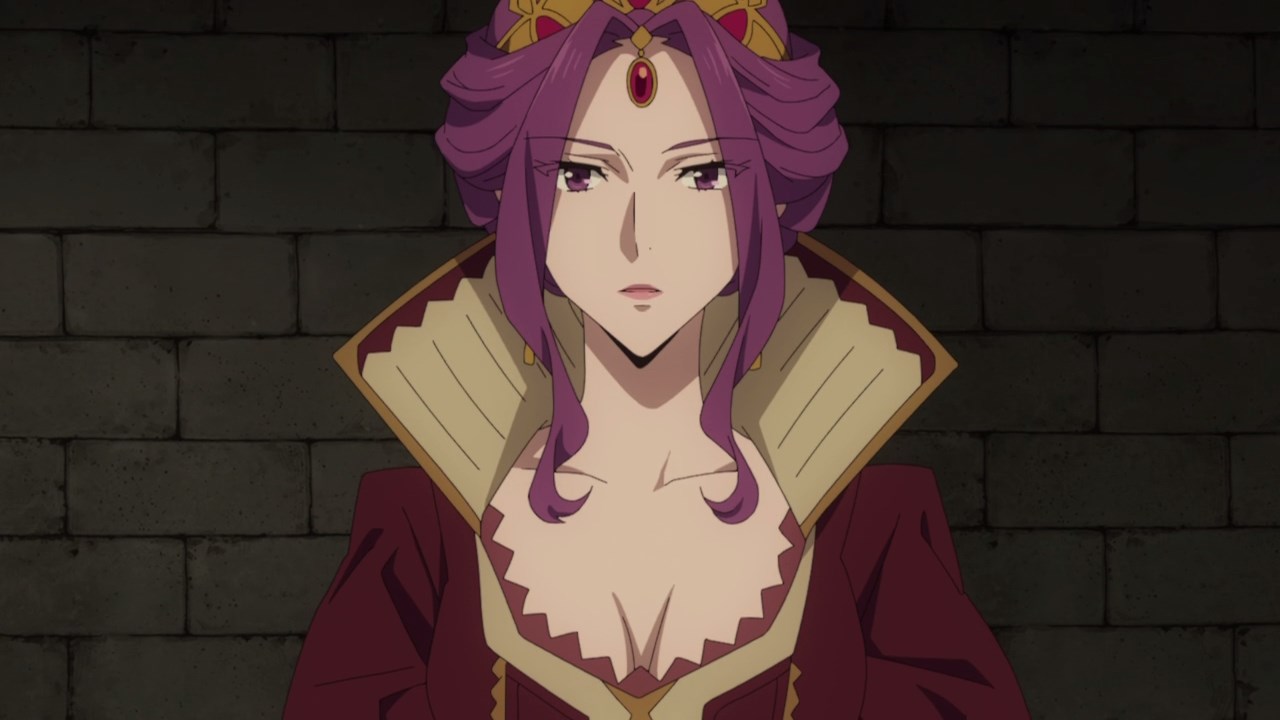 Also, here’s Queen Mirelia Q. Melromarc as she wants to talk about important things to Naofumi, specifically when she’s away from the castle. Well my majesty, take it away! 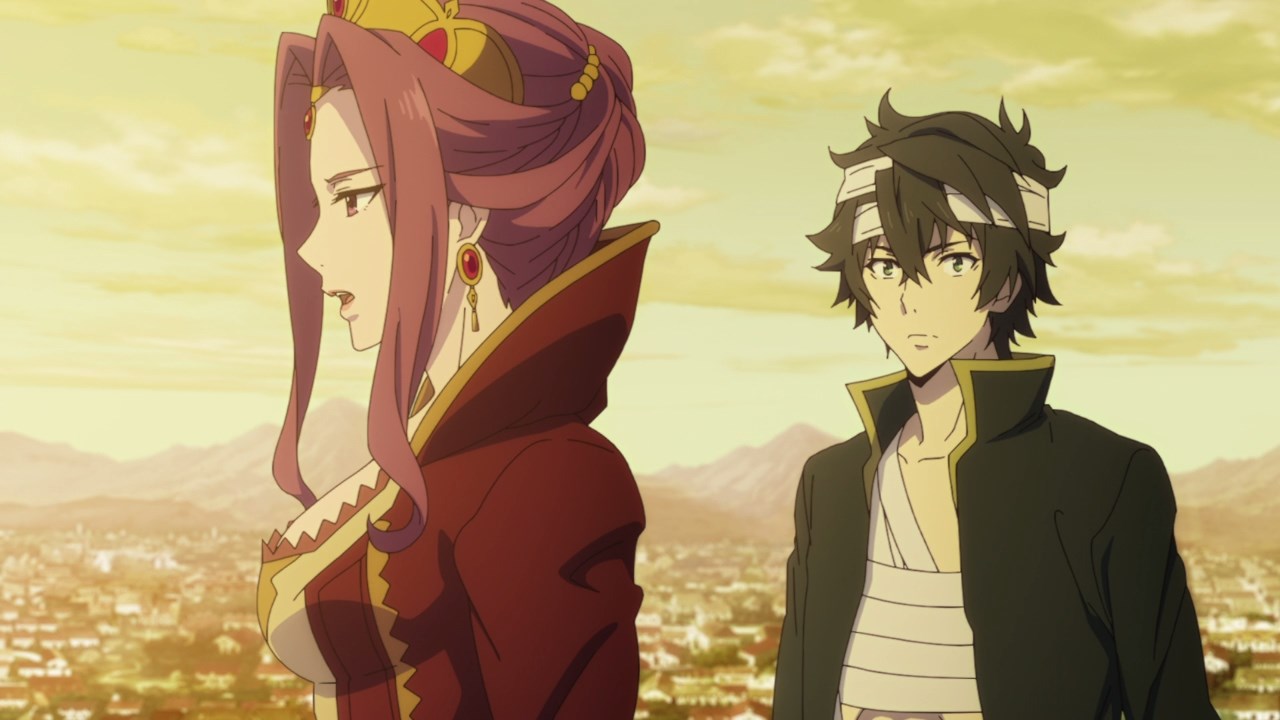 Turns out that the Melromarc Kingdom supposed to summon only one hero, much like everyone else in order to stop the Waves. That’s right, just a single hero because who needs 2 or more.

However, a certain King Aultcray decided to summon 4 heroes in the kingdom which angered the neighboring countries, therefore Queen Mirelia went away to fix the diplomatic mess that her husband made. Of course, things went south during her absense when the Melromarc Kingdom enslaved Raphtalia and her bethren once the previous lord of Seyaette was killed in the previous Wave, colluding with the Church of Three Heroes, making Naofumi as a criminal, the list goes on.

In any case, she apologized to Naofumi on her country’s behalf as Queen Mirelia vows to punish King Aultcray and Princess Malty for their heinous crimes, although Naofumi is still bitter about being mistreated by everyone. 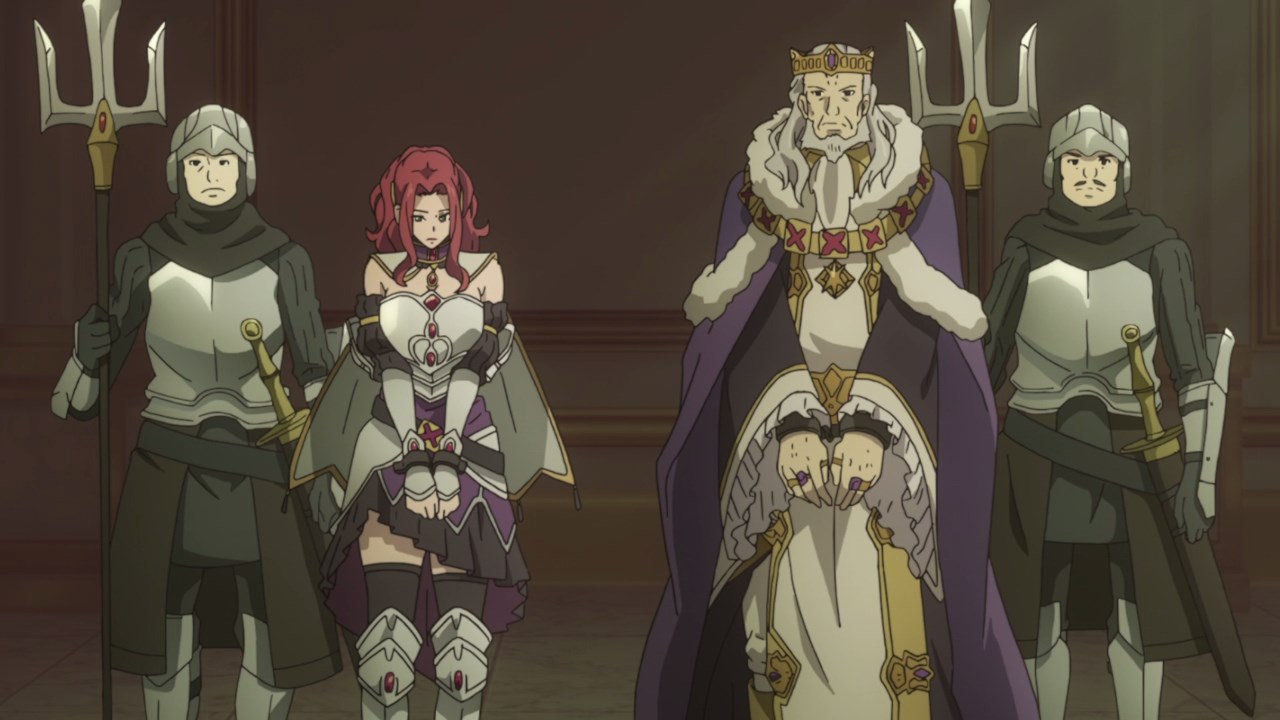 And look, seems that the queen is serious about it as King Aultcray and Princess Malty are apprehended and put on trial in front of Queen Mirelia. 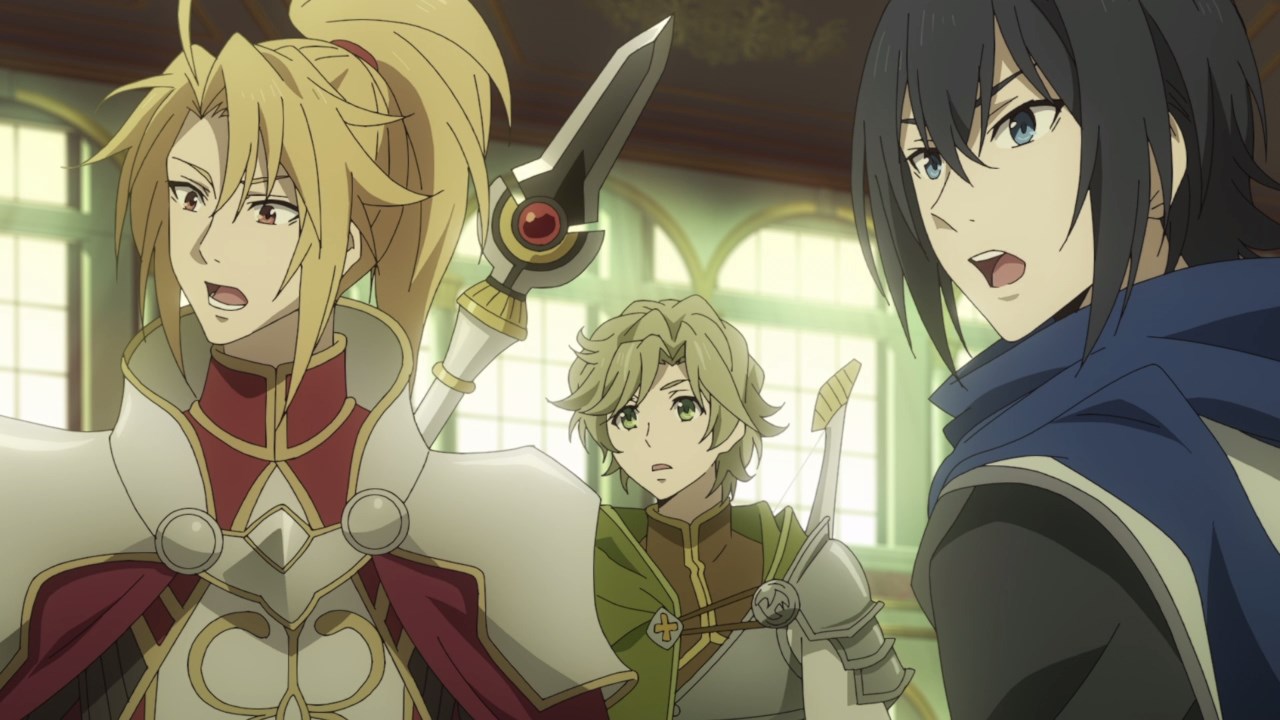 Even the Cardinal Heroes are surprised that they’re treated as criminals, especially Motoyasu Kitamura who believes that Malty (or Myne) is innocent.

Man, I’m pretty much hopeless towards the Spear Hero due to his obliviousness that Malty is one manipulating bitch. 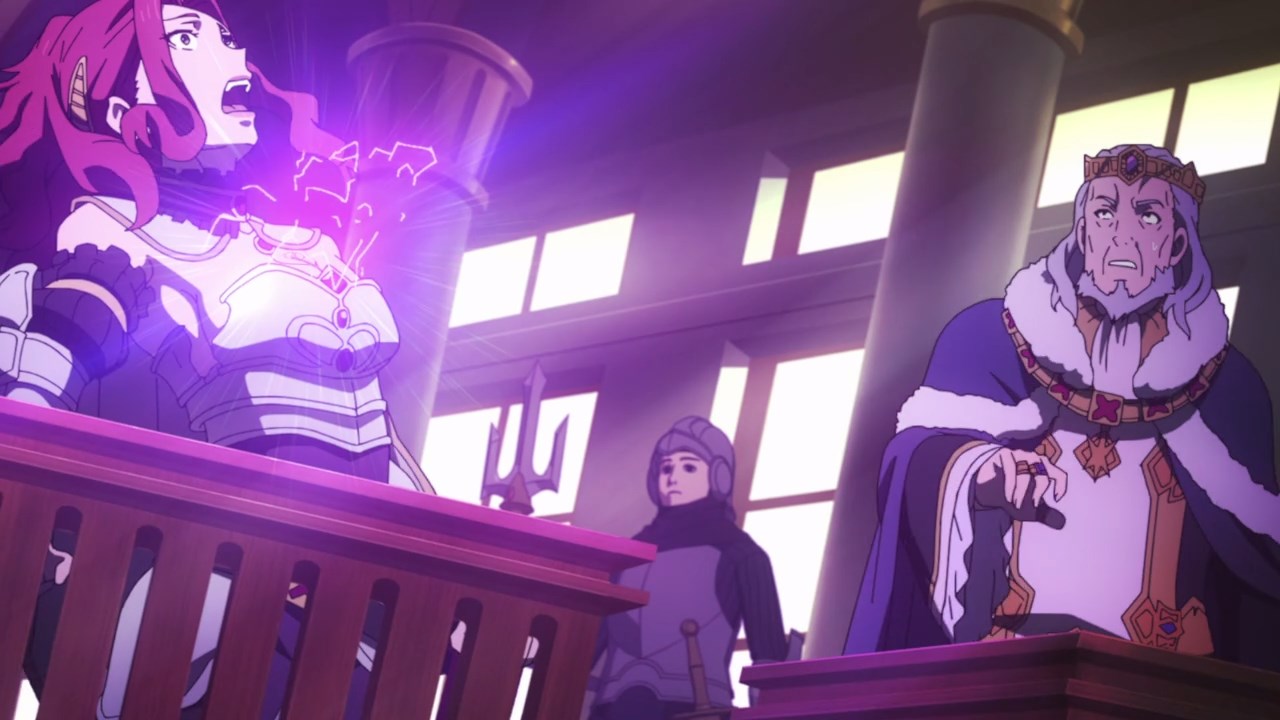 Oh and speaking of that bitch princess, Queen Mirelia put a slave crest onto Malty so that she won’t talk her way out of this trial.

And hey, it works like a charm that every lie she said hurts her like hell. A befitting punishment for the bitch princess who falsely accused Naofumi of raping her, as well as attempting to assassinate Princess Melty to take the throne! 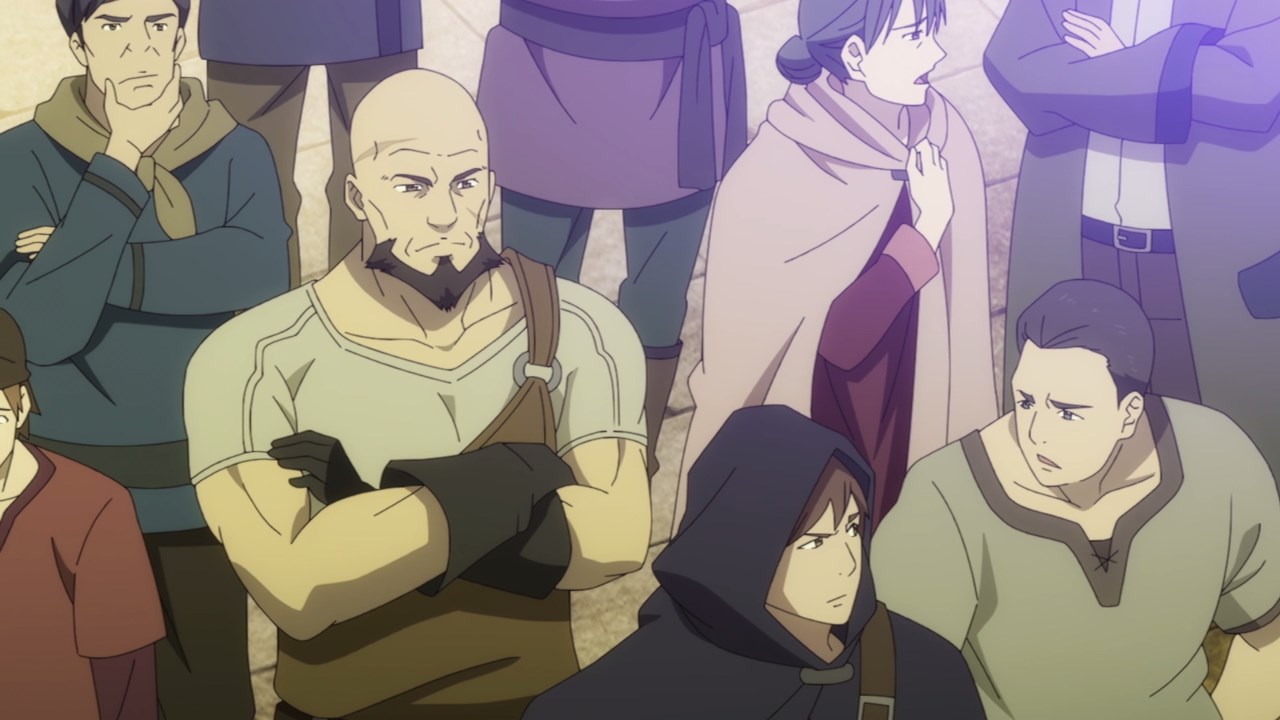 And by the way, this trial is open to the public which means that the likes of the Blacksmith can see how it played out. But you know what, I feel that the trial has reached its logical conclusion… 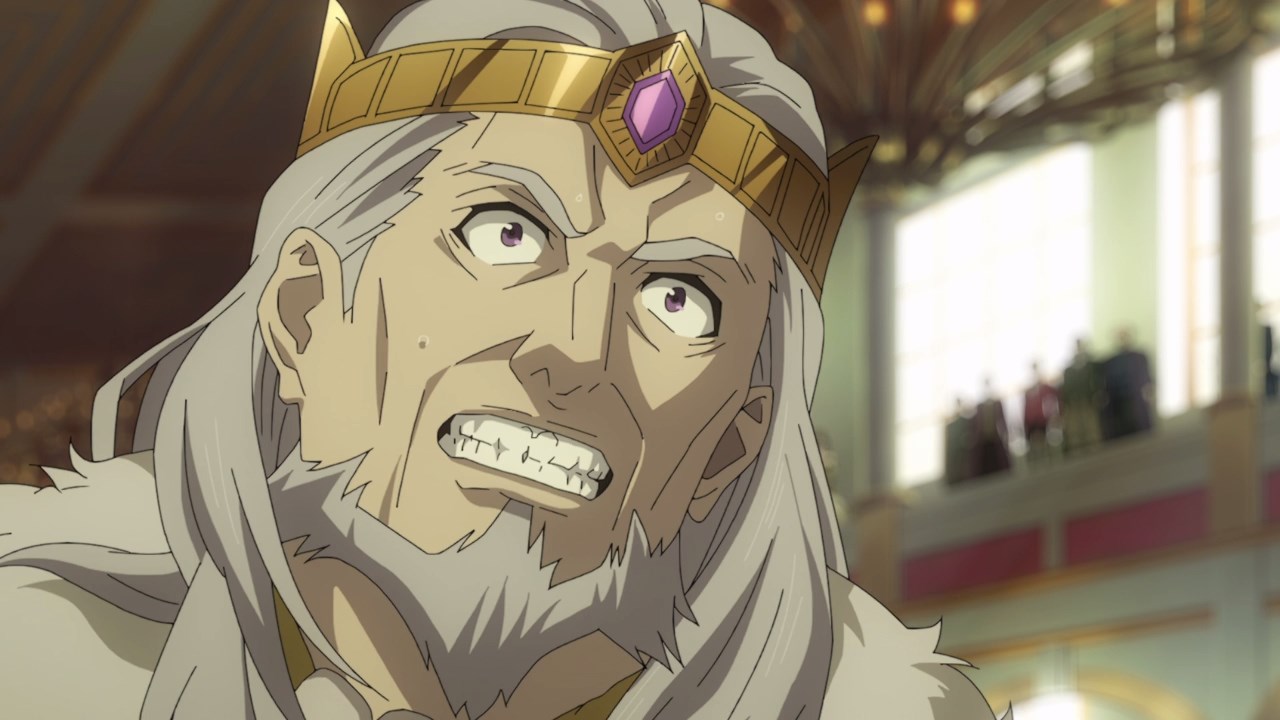 As for the king, the reason why he summoned 4 heroes (which he created a diplomatic crisis) is because he hated the Shield Hero for his association with demi-humans, which he shouldn’t summon the current Shield Hero in the first place if King Aultcray hated him. 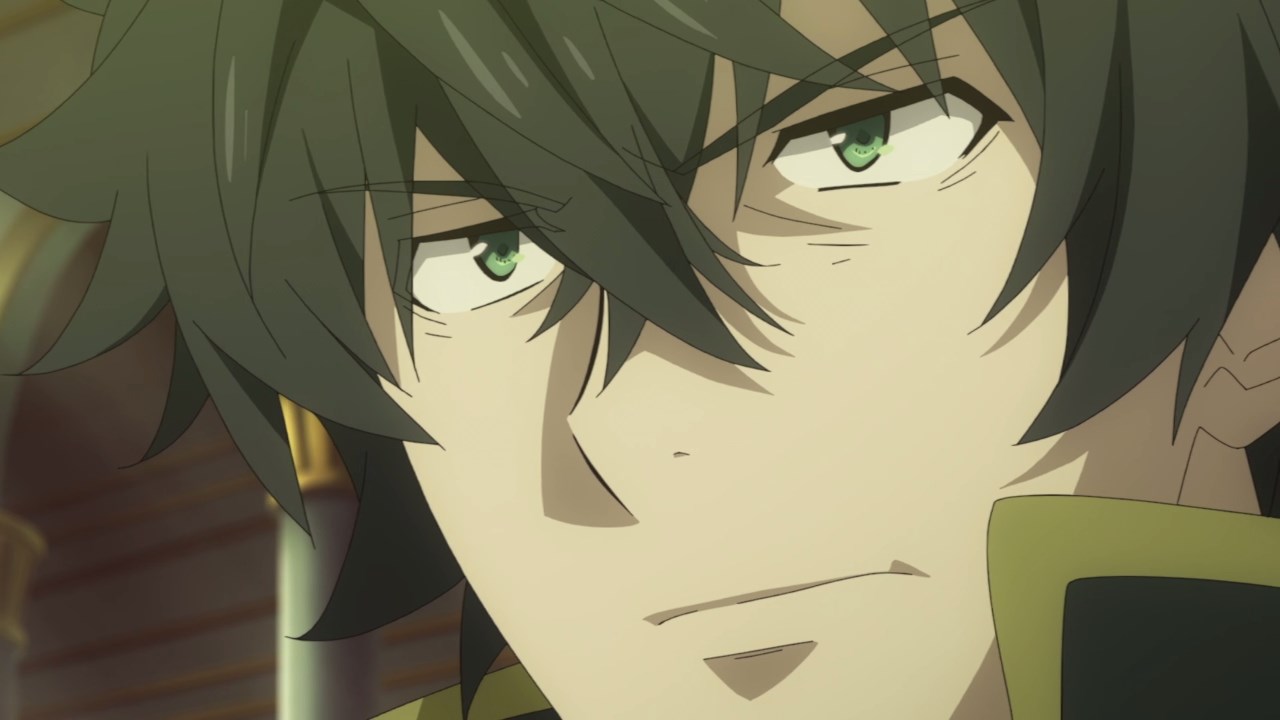 Speaking of Naofumi, he remained silent but in Naofumi’s mind, looks like King Aultcray has already dug his own grave now that he blew his last chance of redemption.

In any case, Queen Mirelia gave them the guilty verdict for the heinous crimes that endanger the country and everything else. Of course, I’m curious to see what will happen to both King Aultcray and Princess Malty. 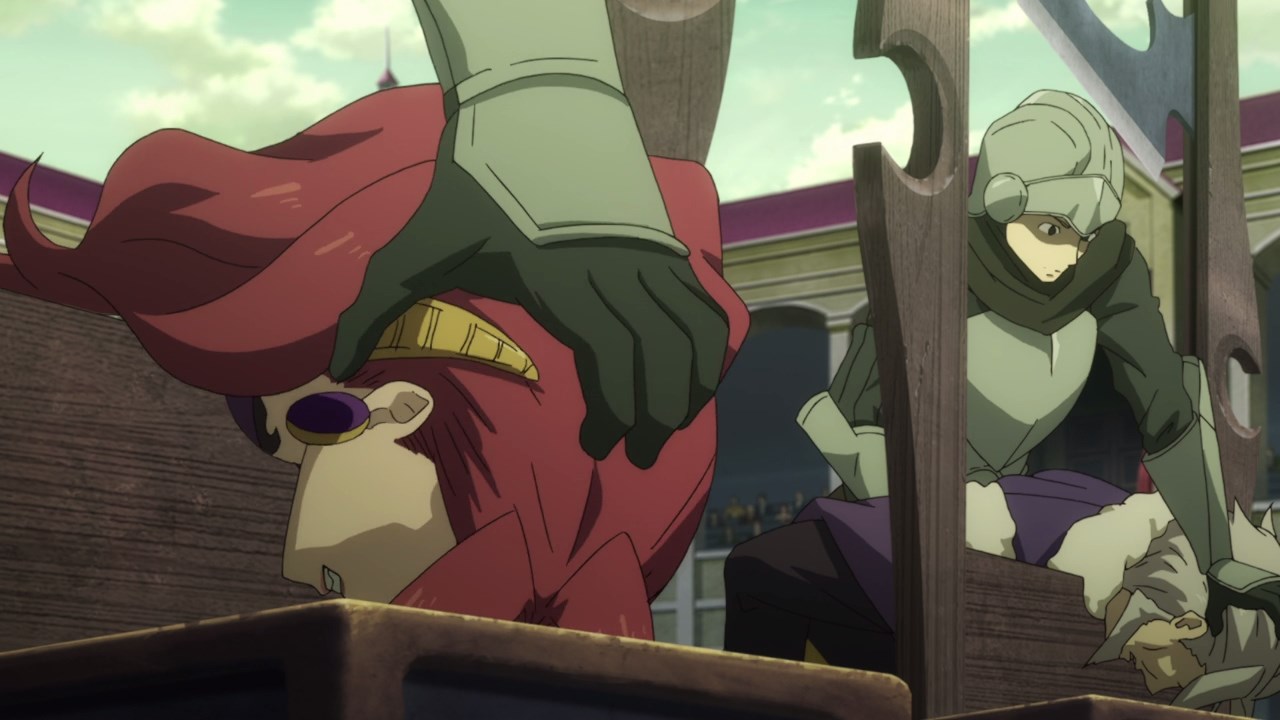 Well, the queen decided to behead them because that’s the only punishment that they’ll have for turning the entire kingdom upside-down. And as much as Queen Mirelia is disgusted to execute her husband and daughter, she has no other choice but to carry it. 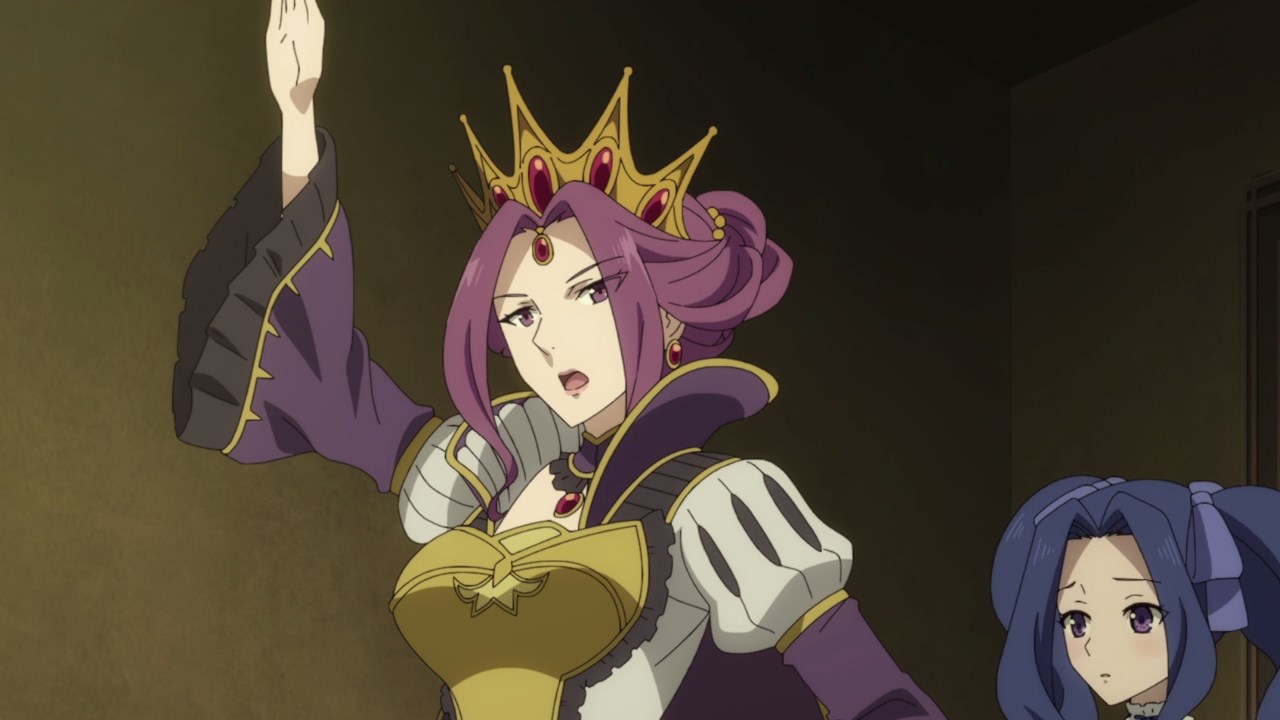 However, it seems that that the execution has suddenly halted when Naofumi intervened and told everyone that beheading them is just too light for them. 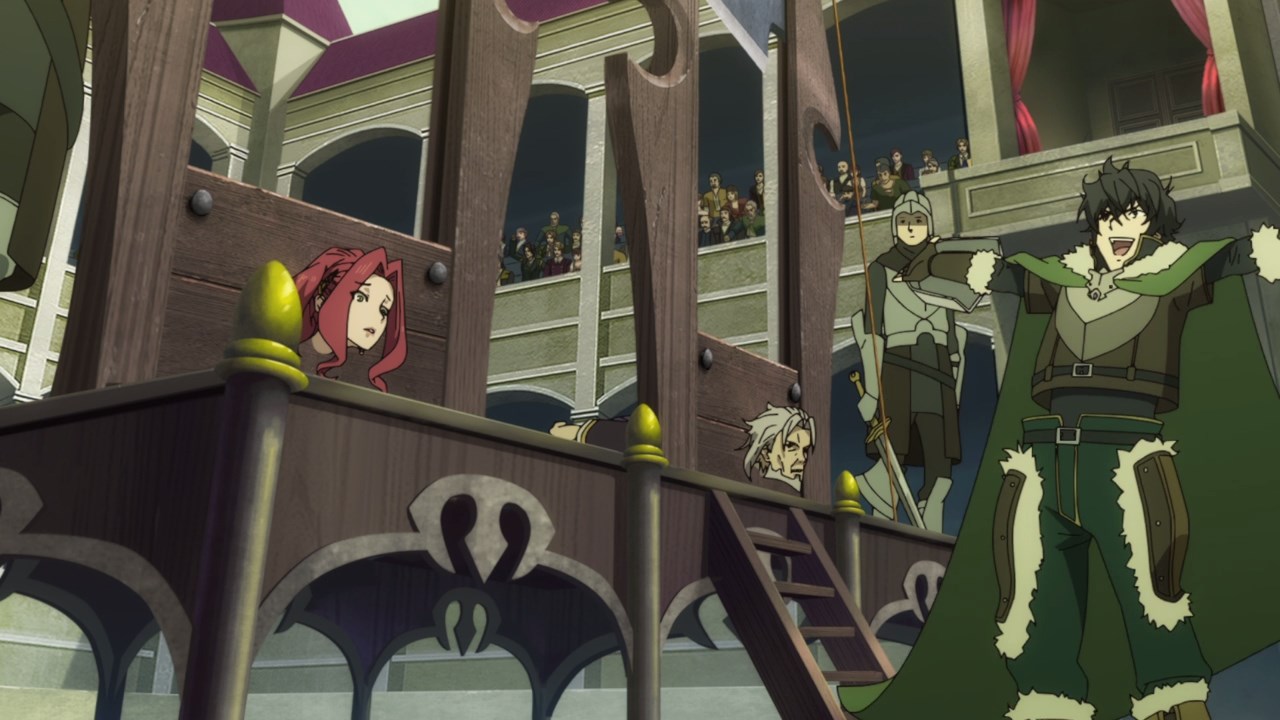 Therefore, the Shield Hero proposes something that’s befitting for both King Aultcray and Princess Malty because humiliation is a better punishment than death.

In any case, Naofumi declared that King Aultcray and Princess Malty will be called as Trash and Bitch/Slut respectively… for all eternity. Looks like Aultcray and Malty will suffer the humiliation much like how they did towards Naofumi. And really, it’s poetic justice right there! 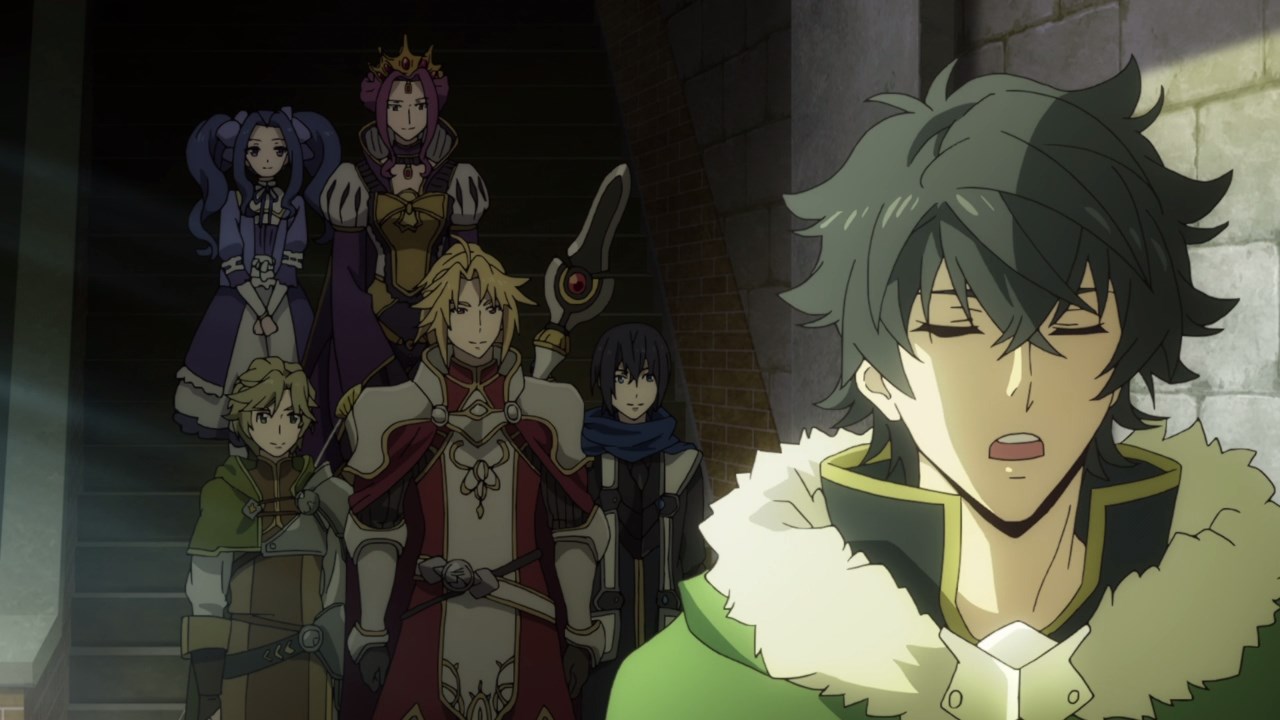 But as for Naofumi Iwatani, while his name is already cleared thanks to Queen Mirelia and he’ll be rewarded handsomely, Naofumi is still committed to stop the Waves together with Raphtalia and Filo without the kingdom’s support much like before. Of course, Naofumi is still open to help the Melromarc Kingdom as well as the rest of the Cardinal Heroes.

But speaking of the Cardinal Heroes, I think it’s the time for the likes of Ren Amagi, Itsuki Kawasumi, and Motoyasu Kitamura to suffer like Naofumi did before. Although what I said is cruel as I want them punished for mistreating and misunderstooding Naofumi Iwatani, it’ll happen sooner or later because they treated this world as some video game. 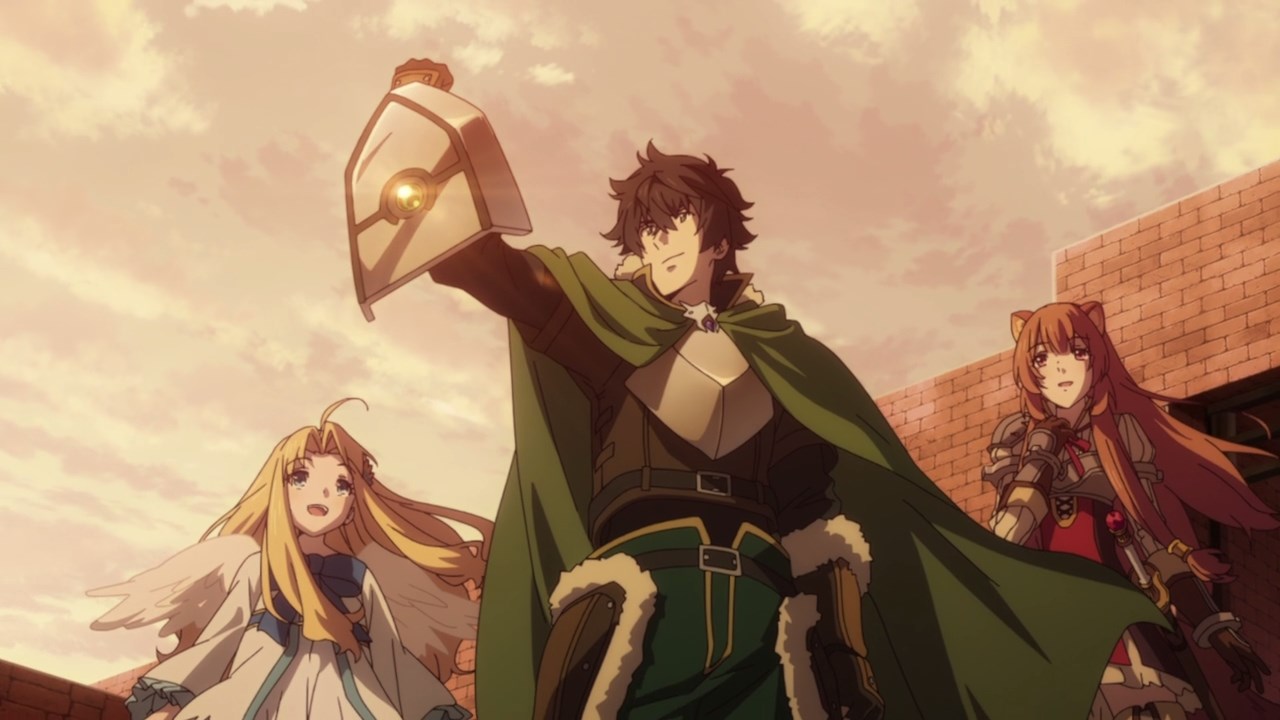 For now, Naofumi Iwatani and his party walks away triumphant now that the Shield Hero has finally rose from an outlaw to a dignified hero.

Still, we have a few episodes left before this anime series is over and while his name is cleared, there are some people who are still bitter towards Naofumi. Anyways, I’m glad that Naofumi Iwatani is no longer a criminal!