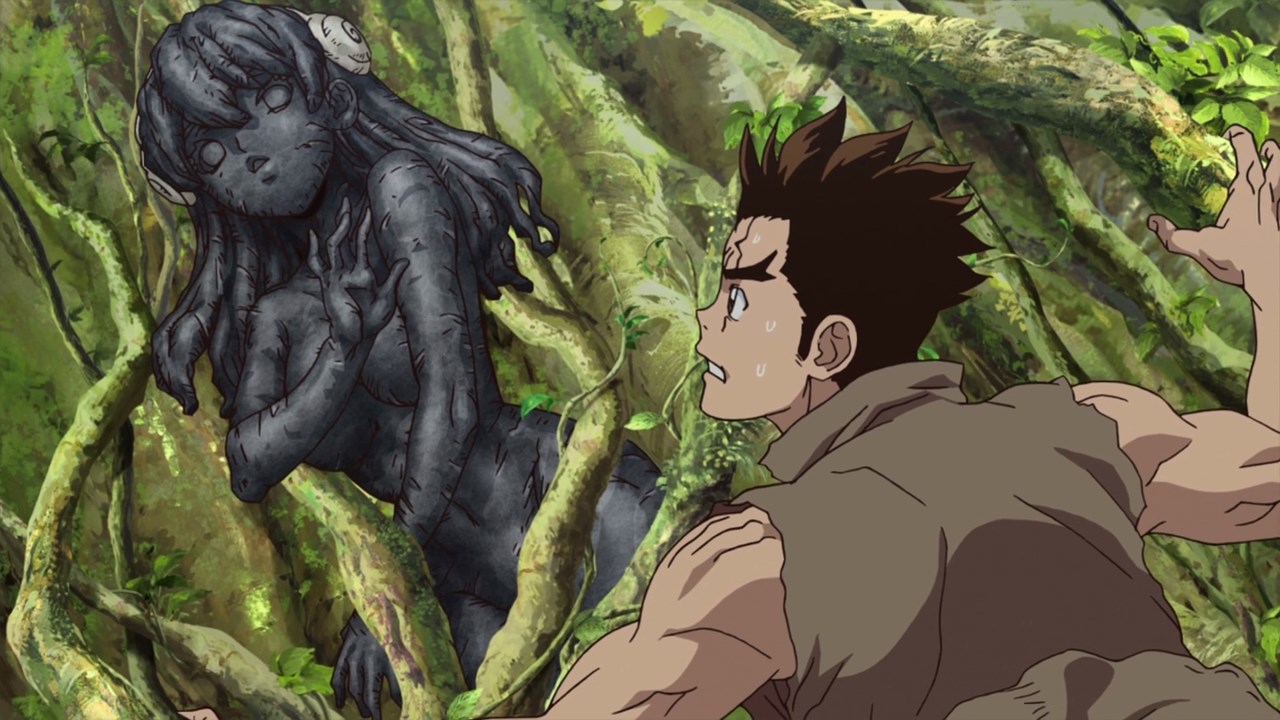 Last time, Taiju Ooki and Senku just perfected a liquid that will corrode stones. Now, they’re gonna use it towards Yuzuriha Ogawa because humans need to repopulate after all. 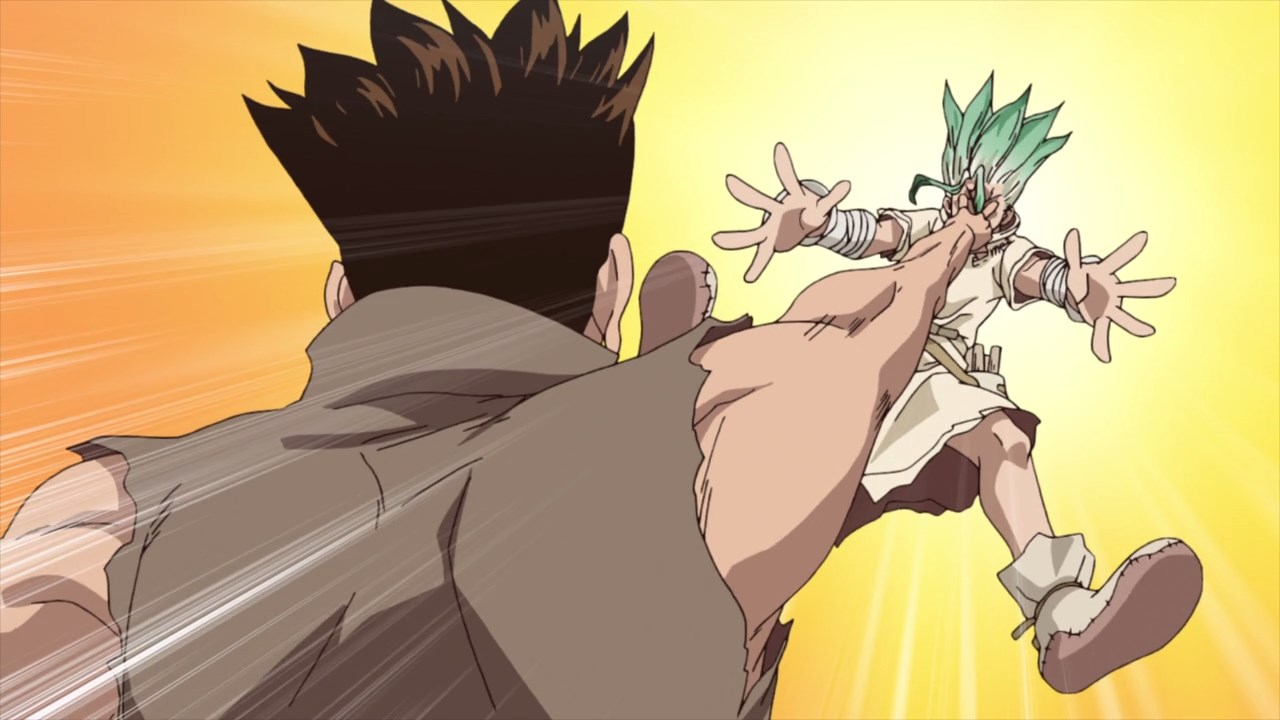 But first, they need to give something to cover Yuzuriha up since she’ll be naked once de-petrified. I mean, Taiju doesn’t want anyone seeing his crush in the nude, including Senku in which he got poked in the eye. 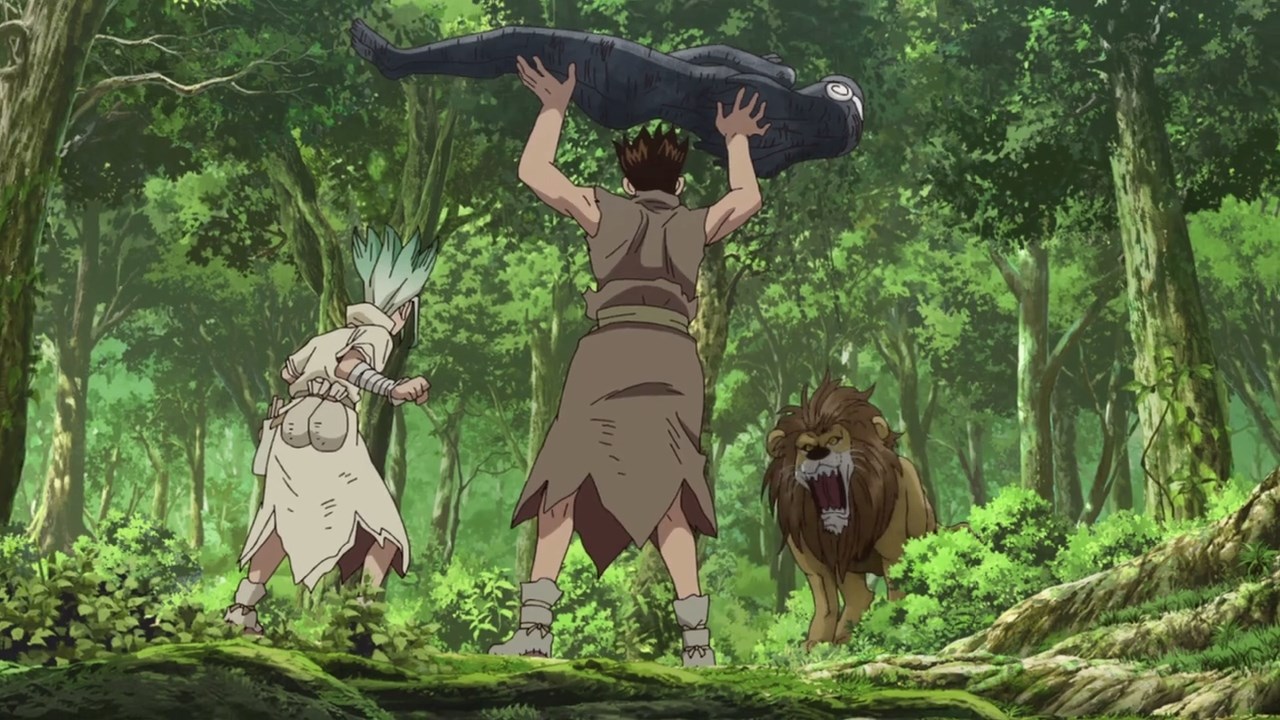 Unfortunately, they’ll have to stop their de-petrification when a coalition of lions have arrived to eat both Taiju and Senku. Oh, and they can’t lose one of them because they’re dependent of each other. 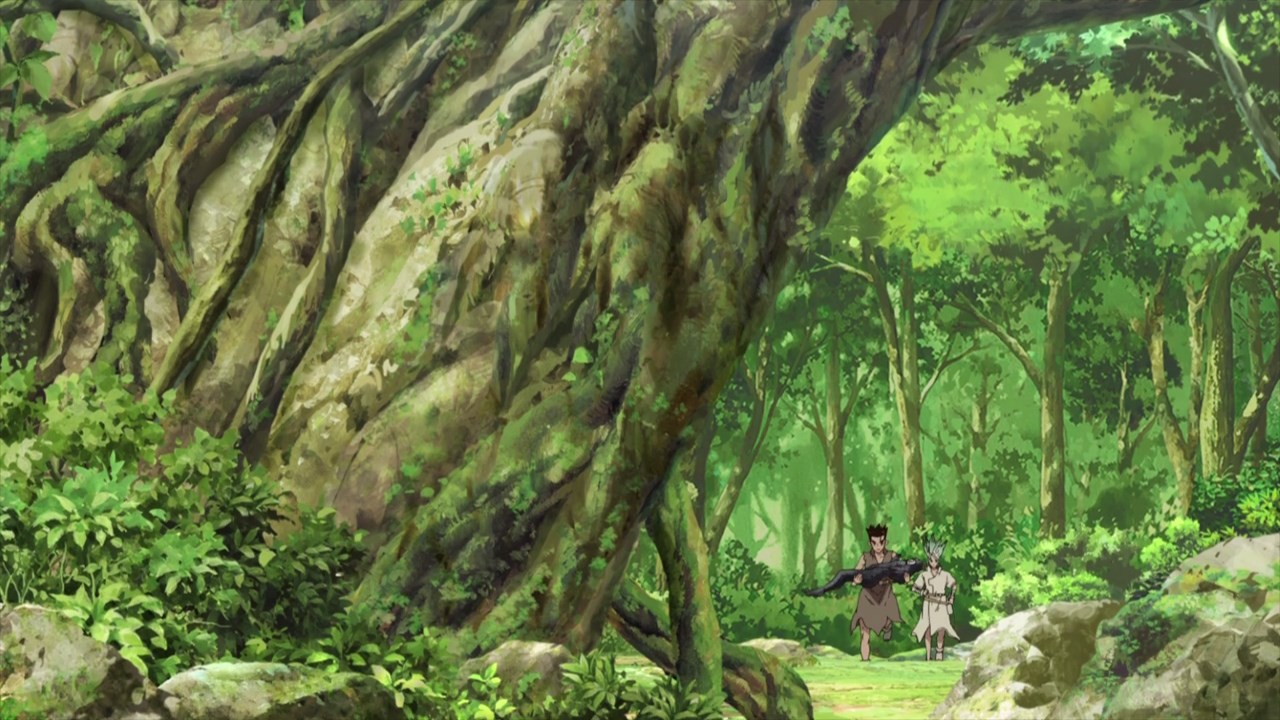 So, the only thing that they’ll do is to run away towards a petrified person in which Taiju claimed that he’s the strongest. 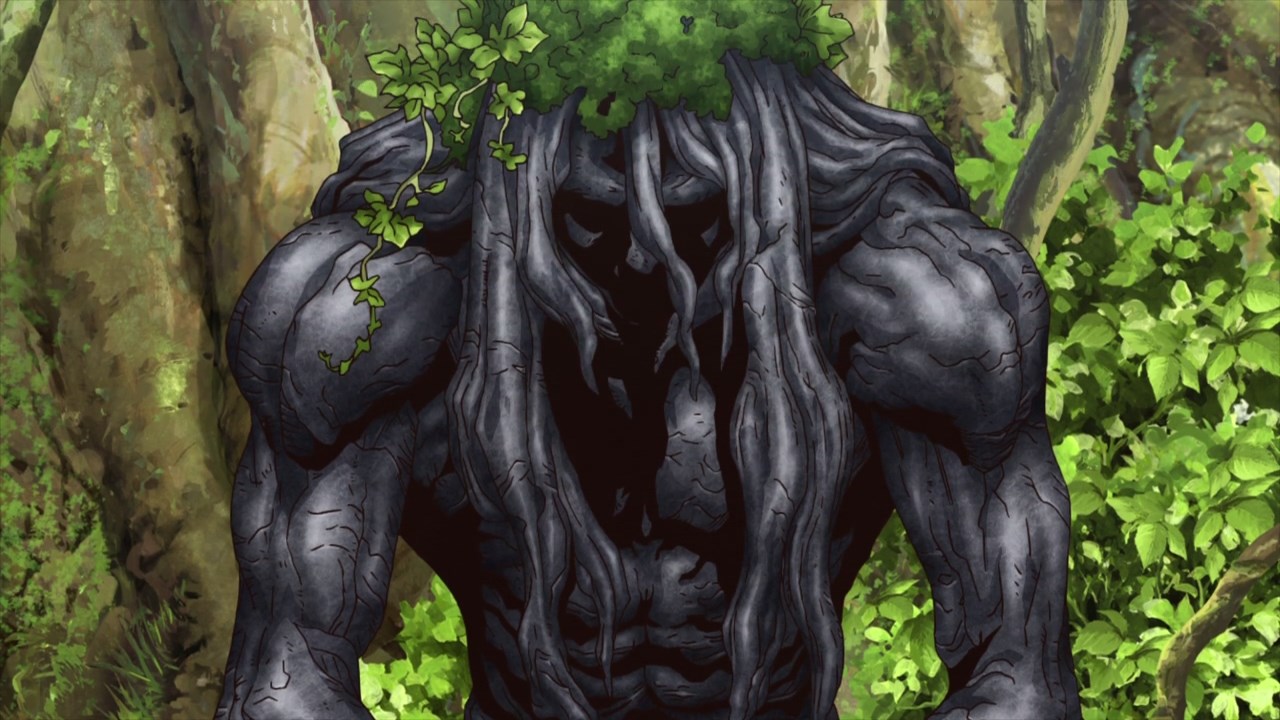 This guy right here is Tsukasa Shishio and while he looked like Tarzan, Taiju Ooki believes that he’s the only one who’ll save them from being eaten by lions. 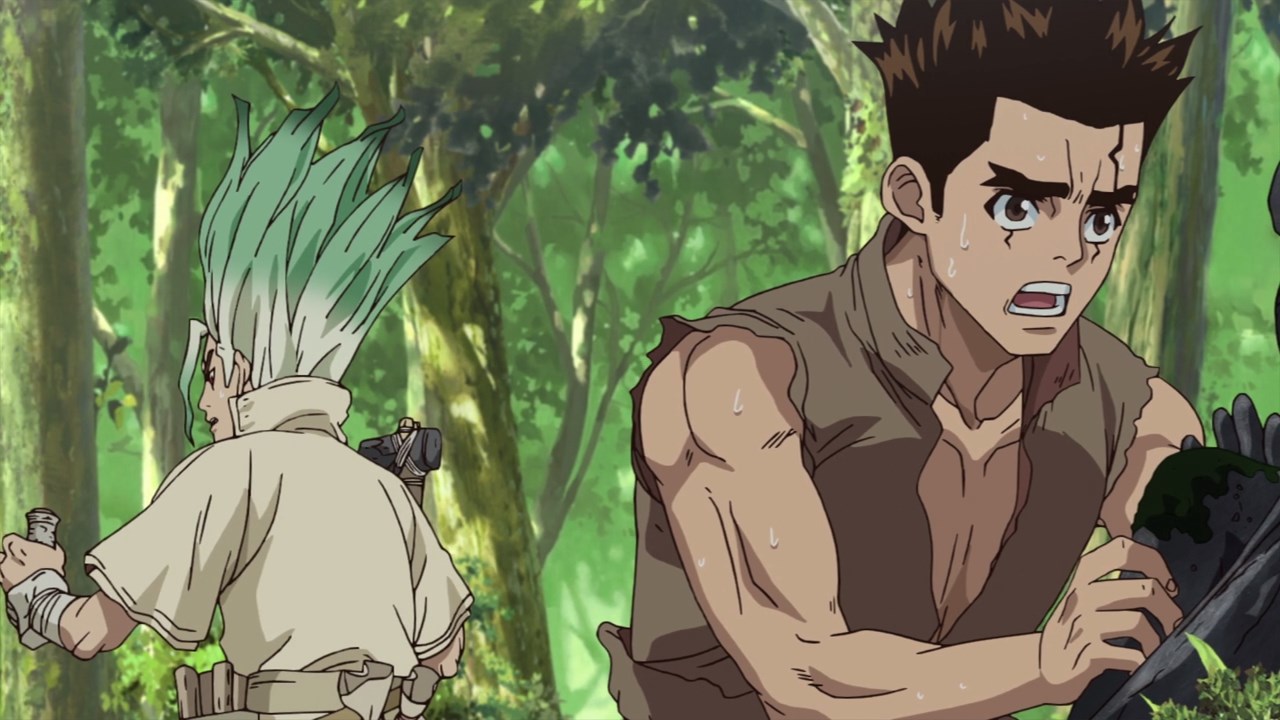 Anyways, Taiju Ooki put Yuzuriha Ogawa to a tree while Senku took a bottle of de-petrification liquid so that he can use it towards Tsukasa Shishio. 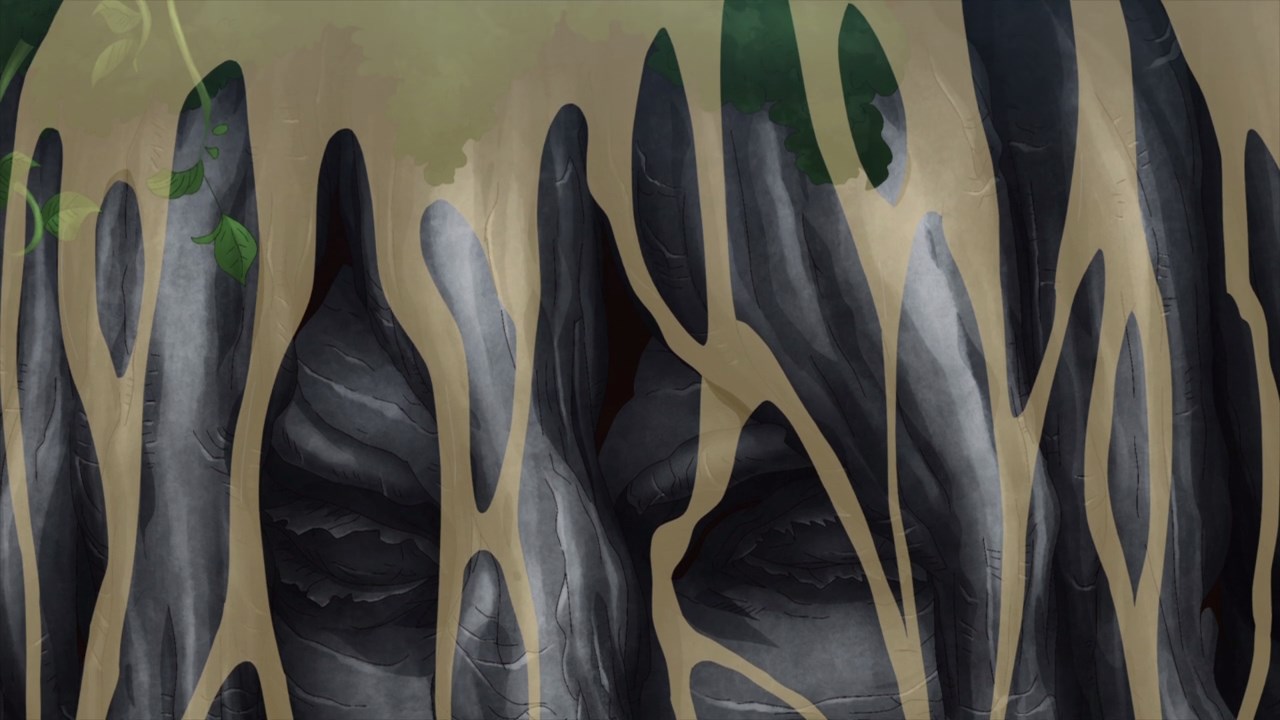 But sure enough, Tsukasa Shishio emerges from his rocky shell as he’s ready to pounce those lions. 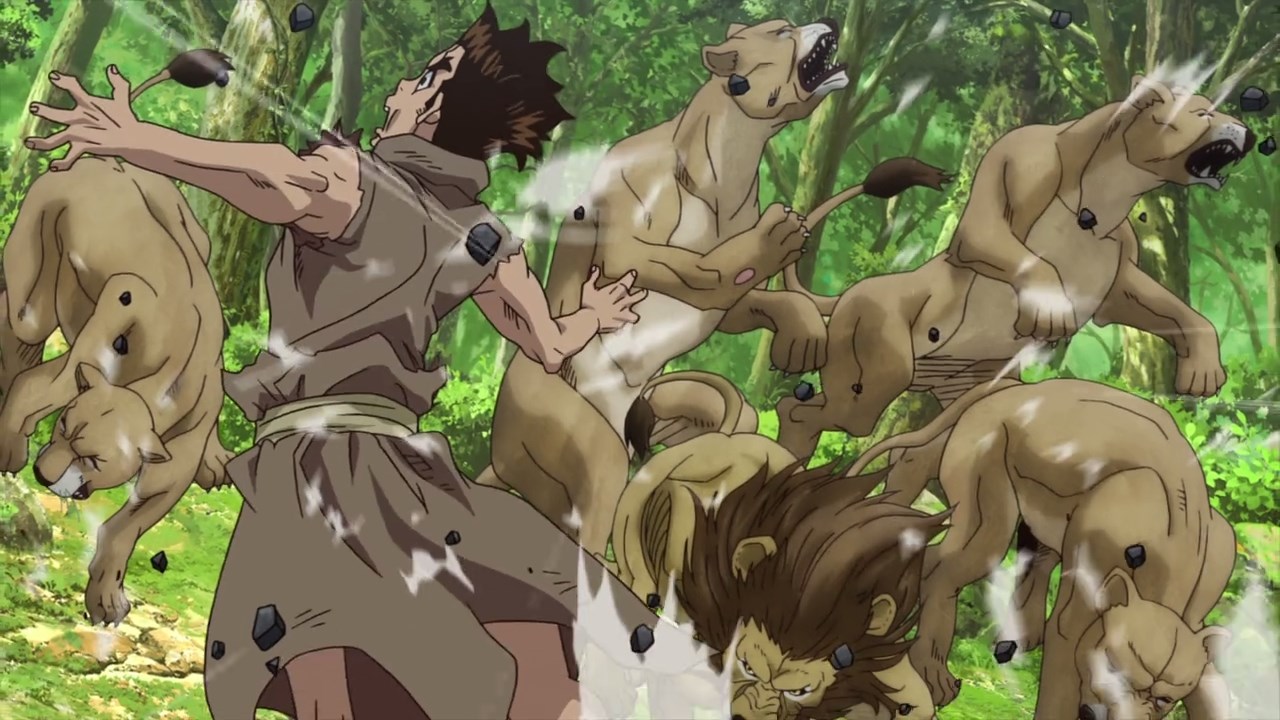 Oh yeah, and Shishio used those rocks as improvised shotgun pellets which will knock those lions out. Let’s hope that Taiju Ooki will be okay since it does hurt him! 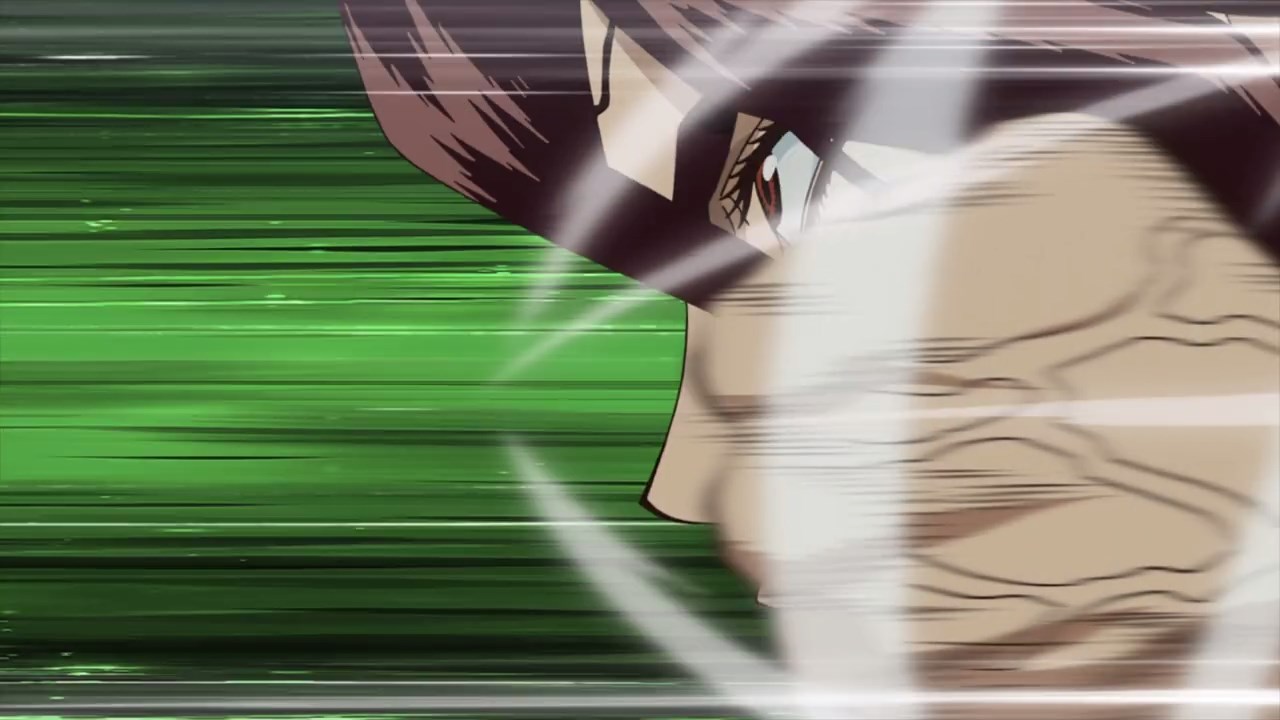 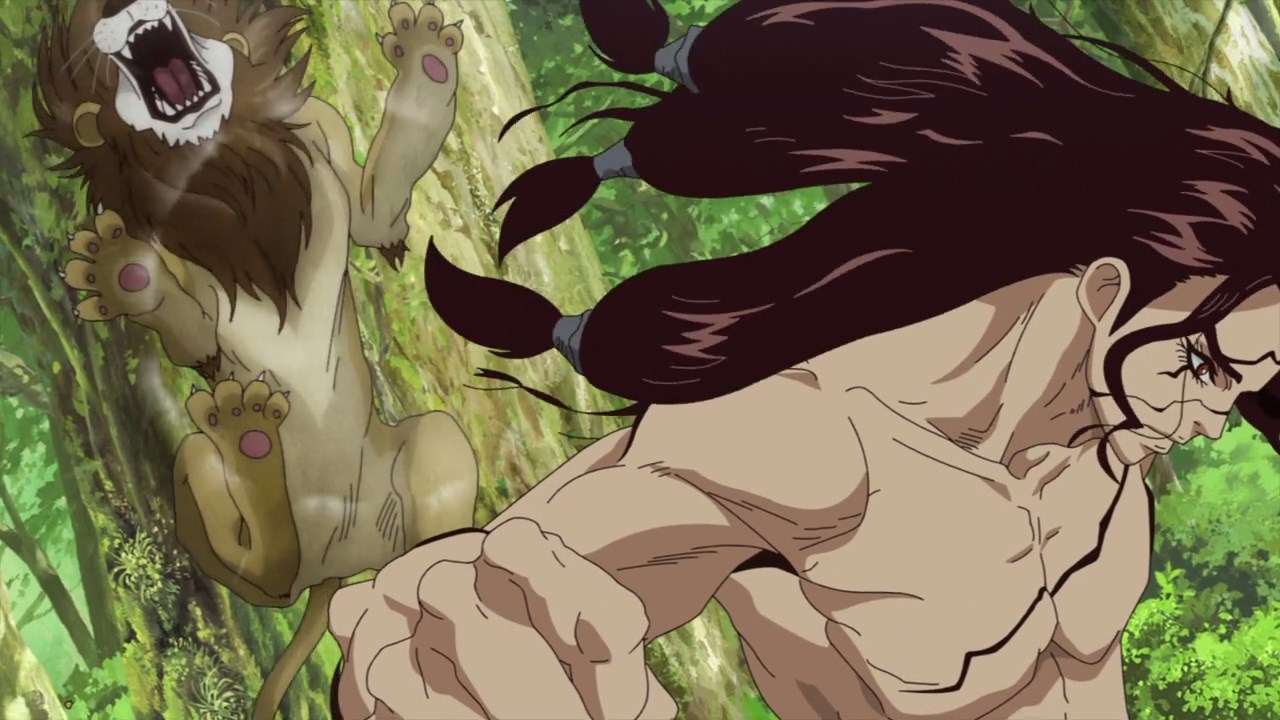 In any case, Tsukasa Shishio scared the lions away by killing its leader with a single punch. Thus, both Taiju Ooki and Senku are saved. 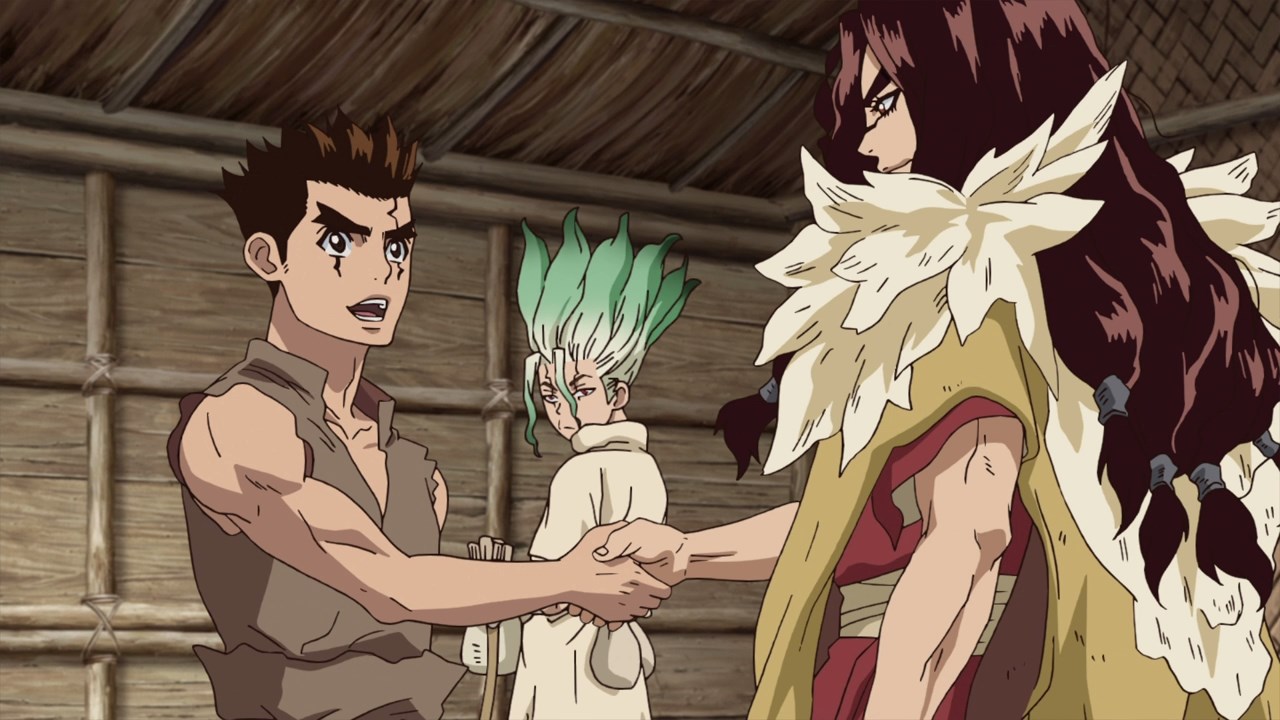 Of course, they’ll have to postpone their attempts to de-petrify Yuzuriha but hey, both boys welcomed Tsukasa with open arms as he’s a good asset on rebuilding human civilization. 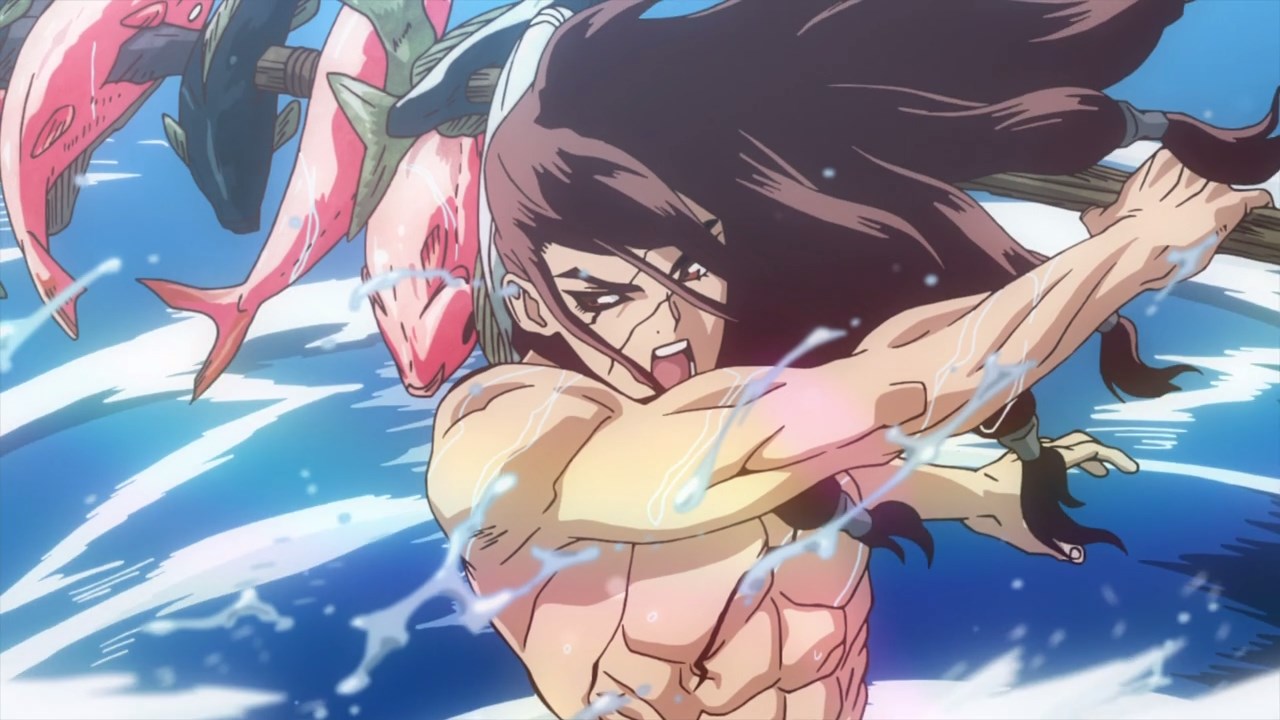 Because you see, Shishio is a good hunter in which he’ll take care of food supplies, ranging from fish to wild boar. 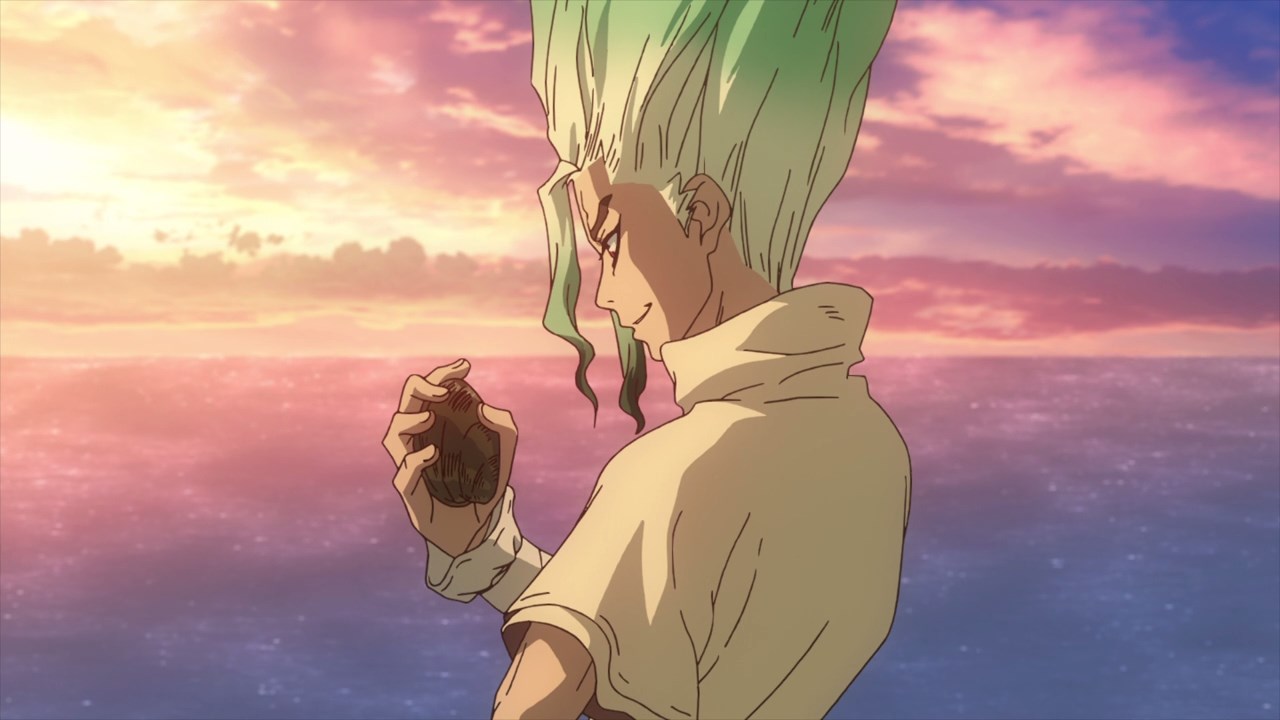 But speaking of rebuilding human civilization, Senku told Taiju and Tsukasa about an important resource that’ll help on speeding-up the rebuilding process. 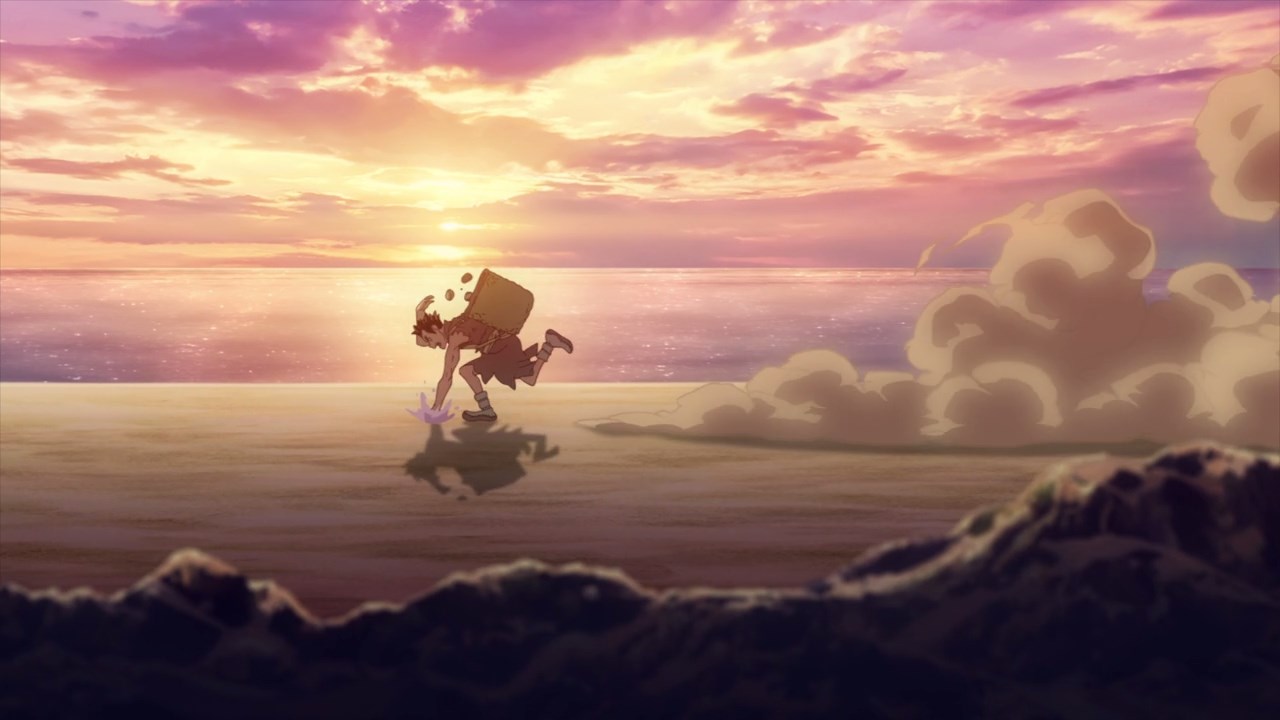 And so, Taiju gathered seashells until sundown. Sure that he maybe a buffoon, but Senku trusts Taiju Ooki ’cause he’ll get the job done. 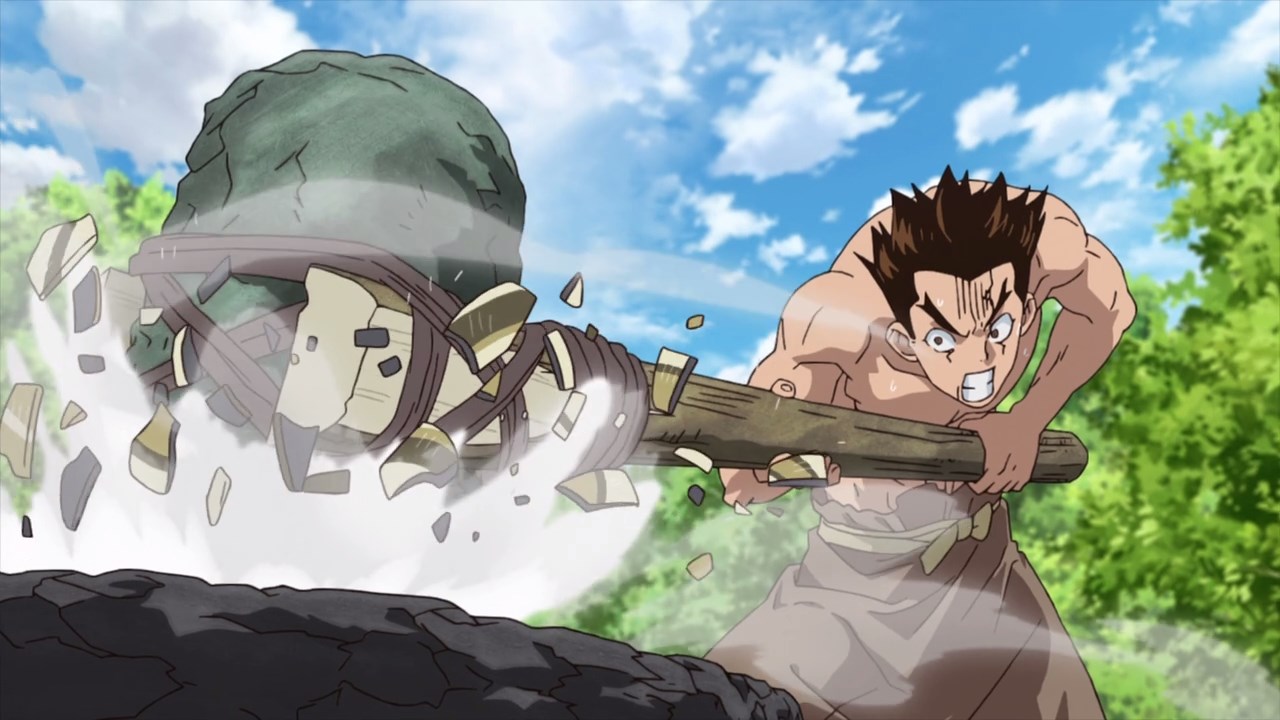 Once he gathered lots of seashells, Taiju proceeds to hammer it down until the shells are reduced to fine powder. That’s how calcium carbonate are made. 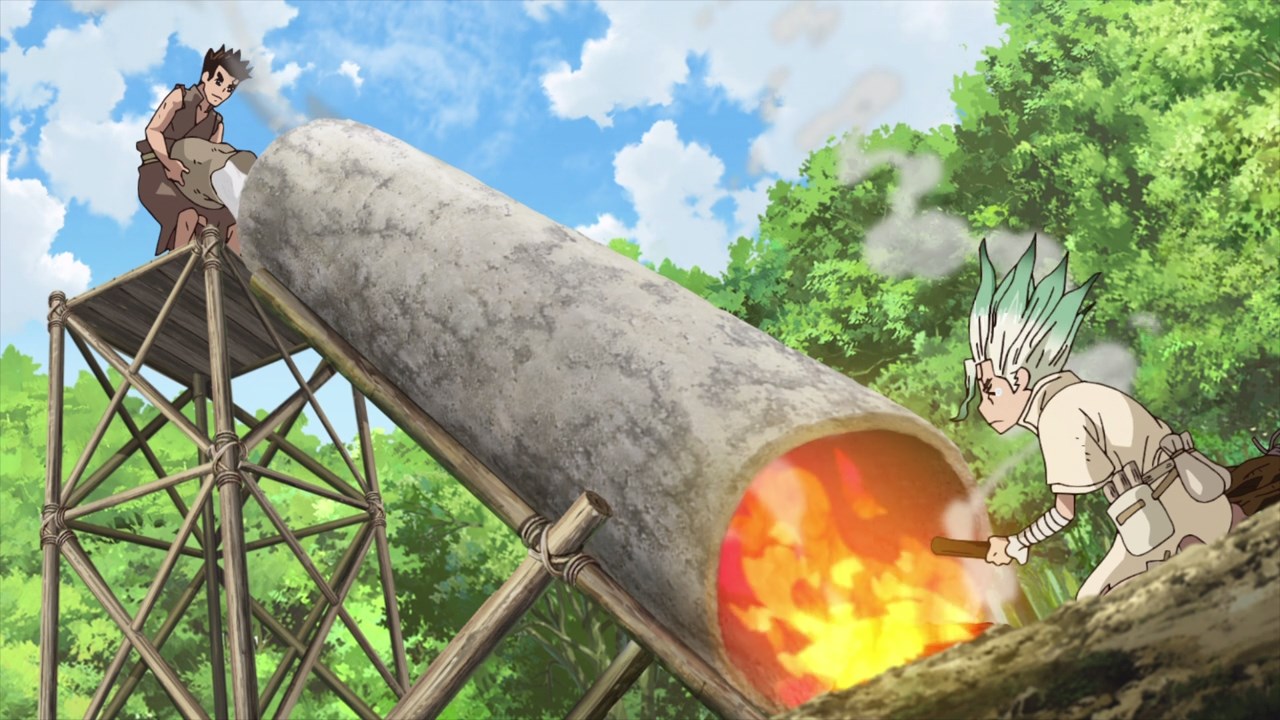 With calcium carbonate at their disposal, this compound can be used in various applications ranging from upgrading the soil in order for vegetables to grow, to making mortar that’ll be used to create stone houses.

Eventually, Senku and the rest will create a permanent settlement, but they really need to find girls and de-petrify them because humanity must repopulate. 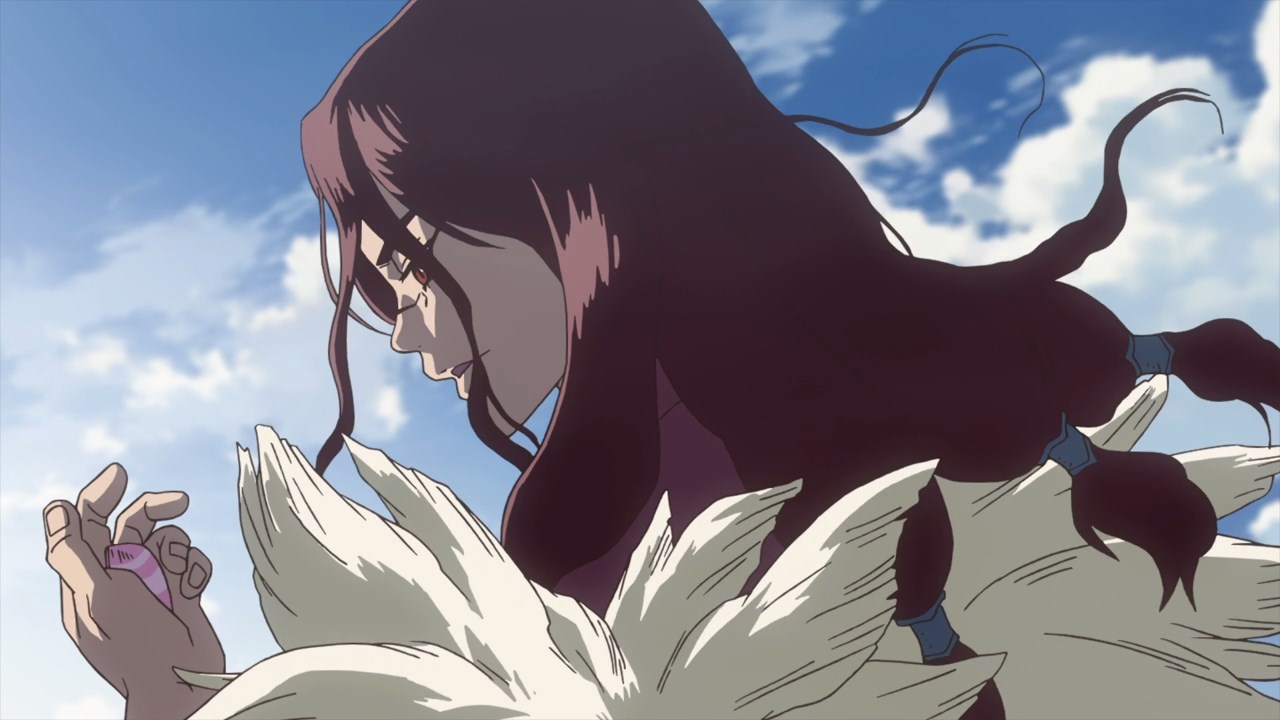 One last thing, Tsukasa Shishio told Senku a story about a boy who gathered seashells for his sister, as she loves reading the story of The Little Mermaid. 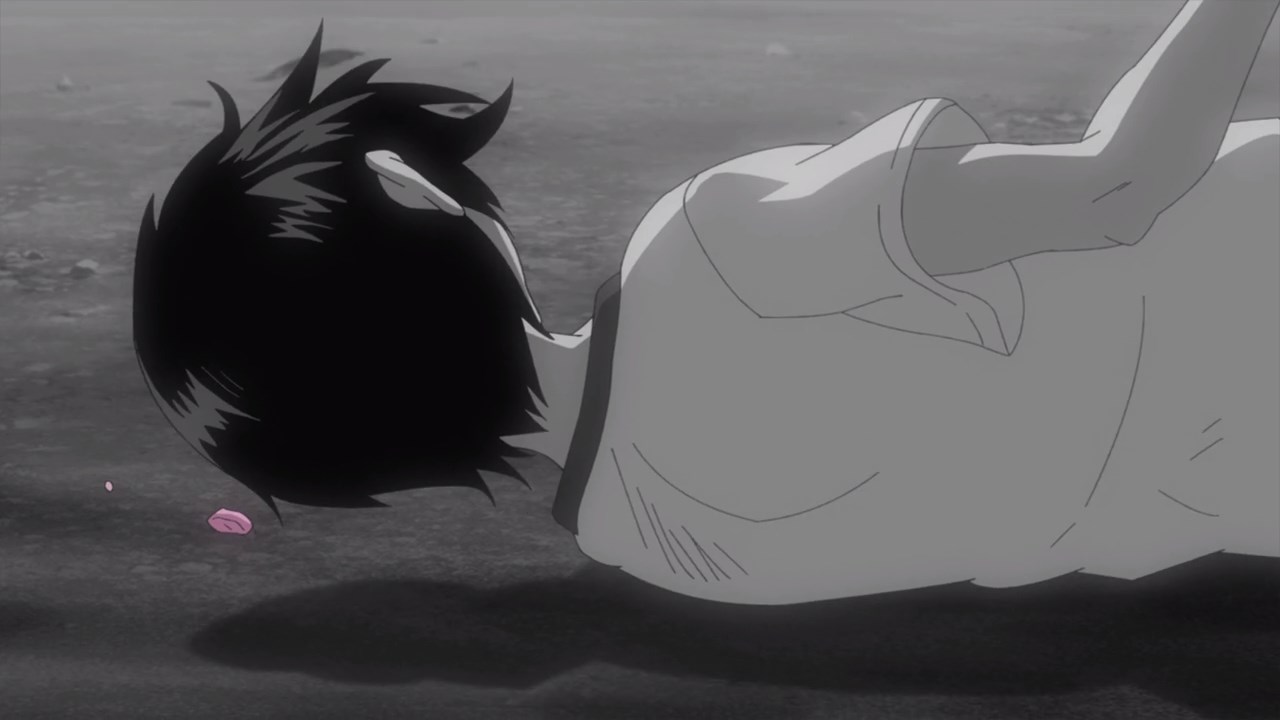 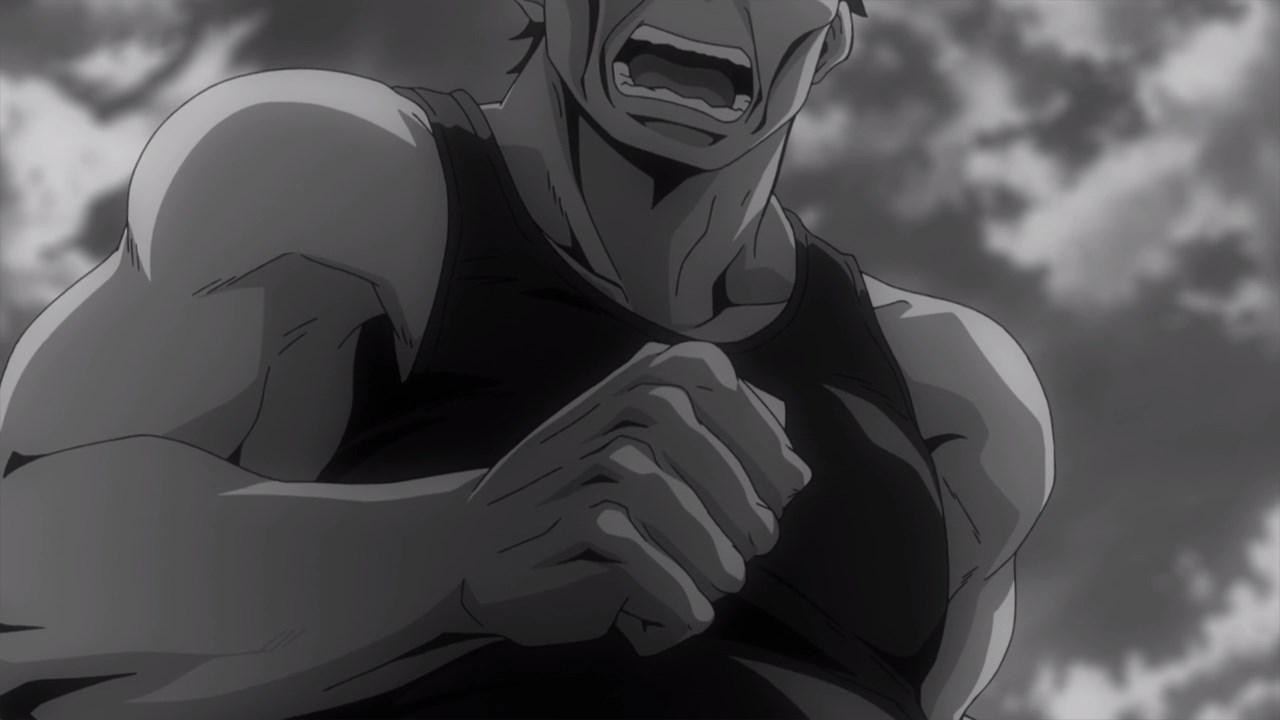 Unfortunately, that boy was beaten up by a drunk man who accused him on trespassing his property. While we don’t know what happened to the boy’s sister, let’s just say that he really resented those who abuse everything. Oh, and you know who that boy is? 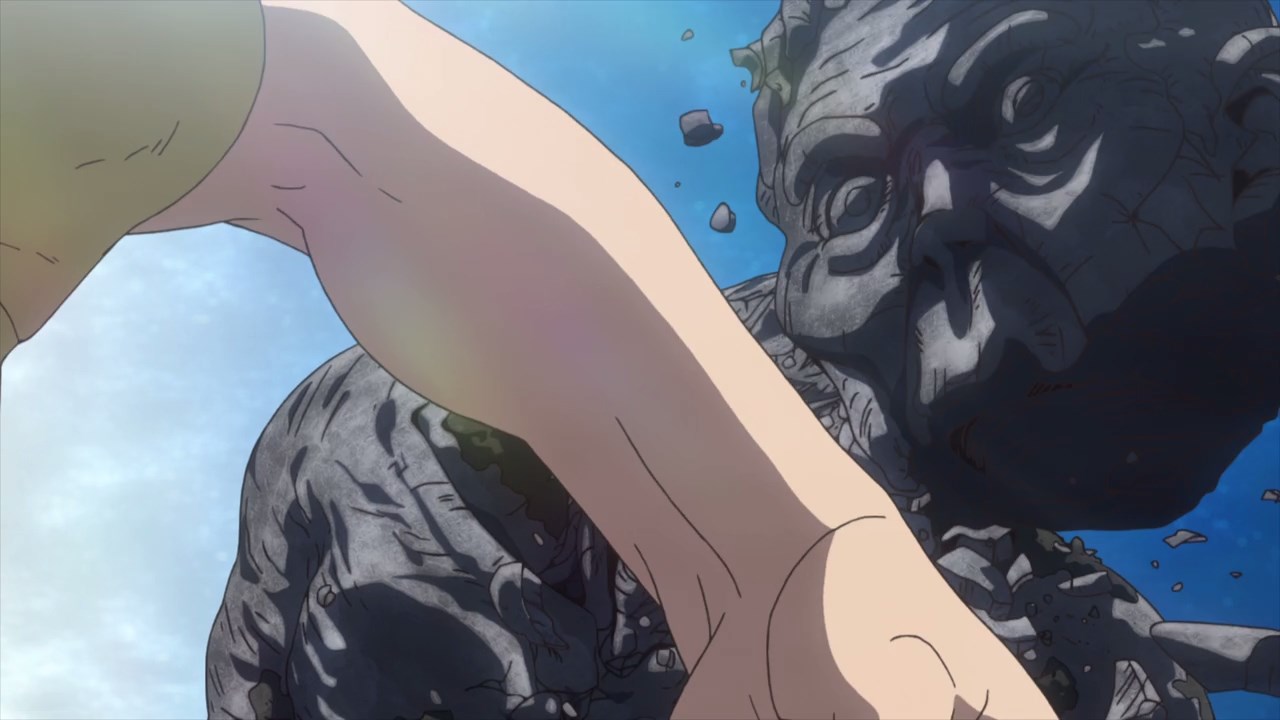 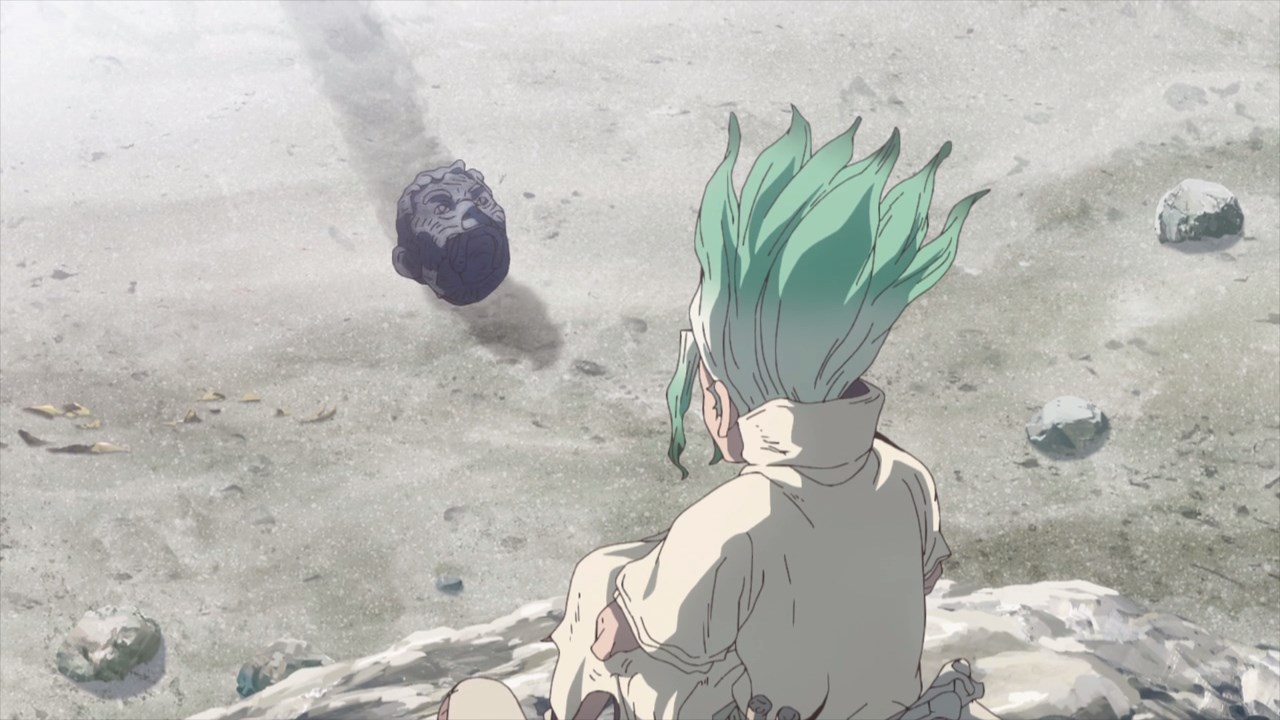 Well, it turned out to be Tsukasa Shishio as he single-handedly punched a petrified man that the head fell-off, killing him off instantly. Said man happened to be the one who owns the beach.

And this is where Shishio’s intention revealed as he doesn’t want to reconstruct civilization as a fast rate because some people will go back to their own greedy ways. In fact, Tsukasa would rather build a world where pure-hearted people will live freely with nature. 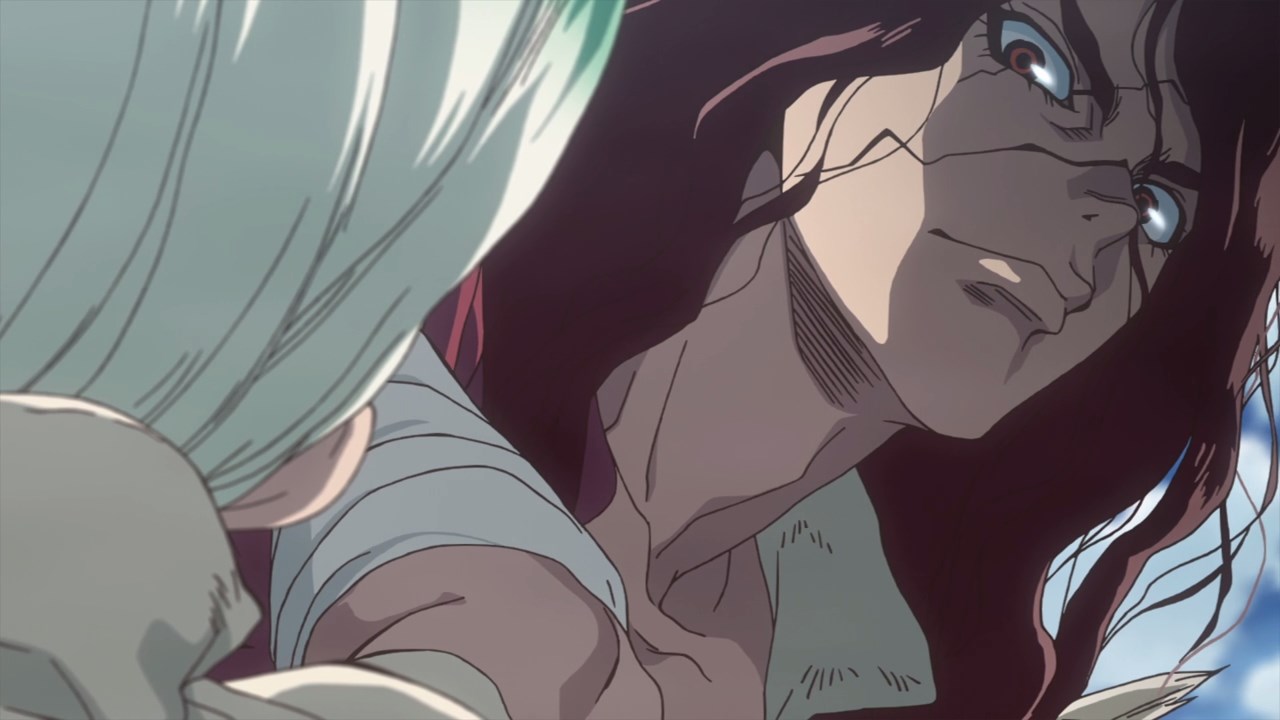 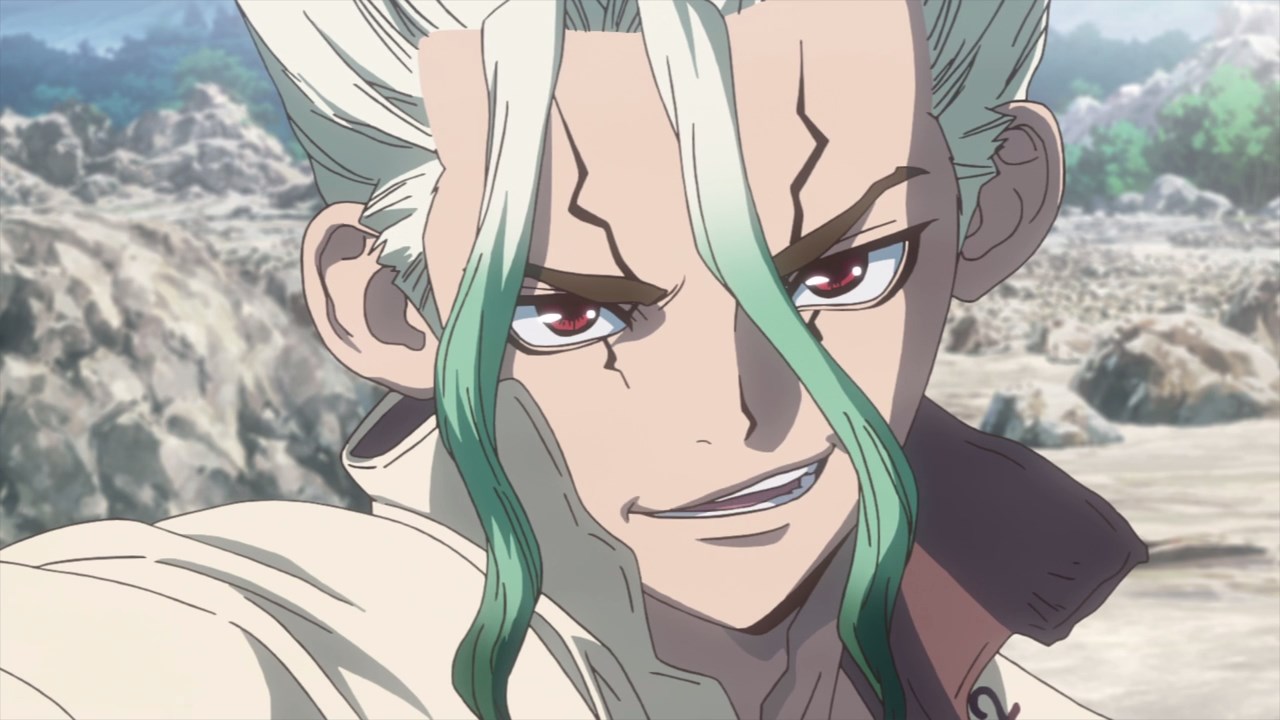 Of course, Senku disagreed with Tsukasa Shishio’s plan as he’ll continue to rebuild civilization in a short amout of time. Besides, modern technology is very interesting and convenient for Senku.

Anyways, looks like we have a rivalry between Senku and Tsukasa Shishio for the fate of all humanity. Of course, Taiju Ooki really wants to de-petrify Yuzuriha Ogawa as soon as possible. Maybe in the next episode, Yuzuriha will be de-petrified.