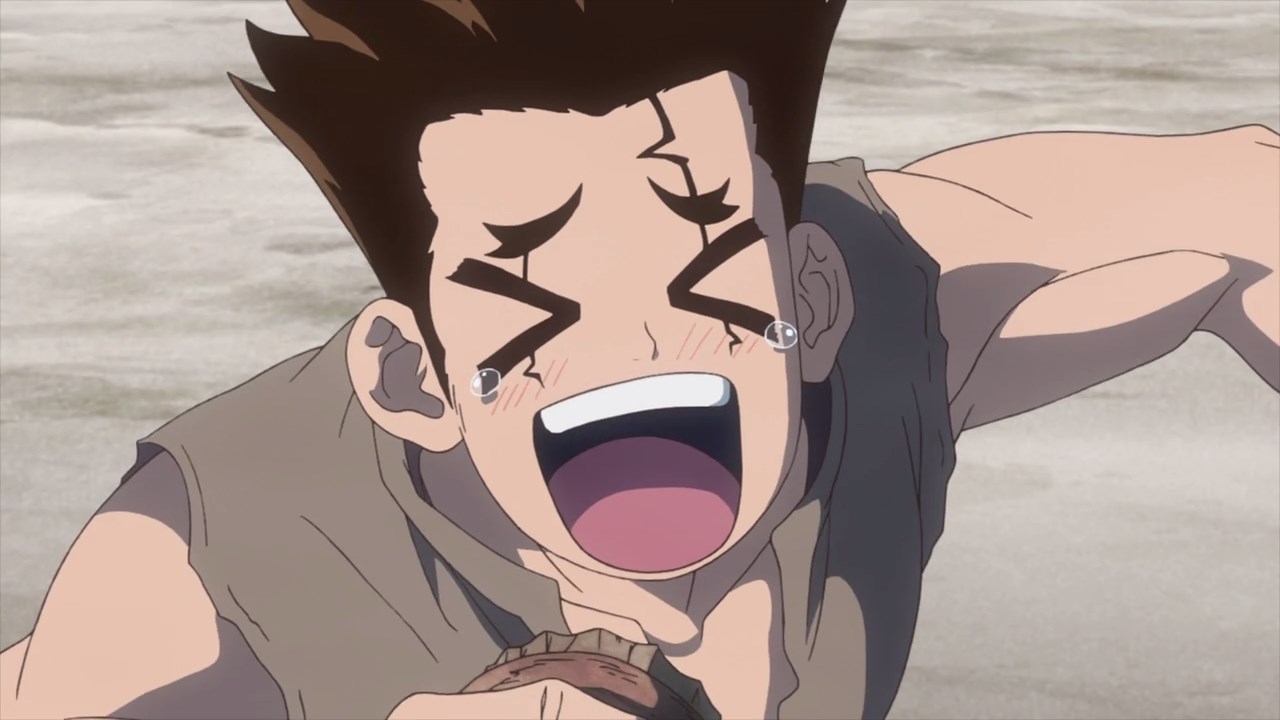 Here’s Taiju Ooki where he brought the miracle fluid (aka the de-petrification liquid) to Senku and Tsukasa Shishio, as he wants to revive Yuzuriha Ogawa right now! 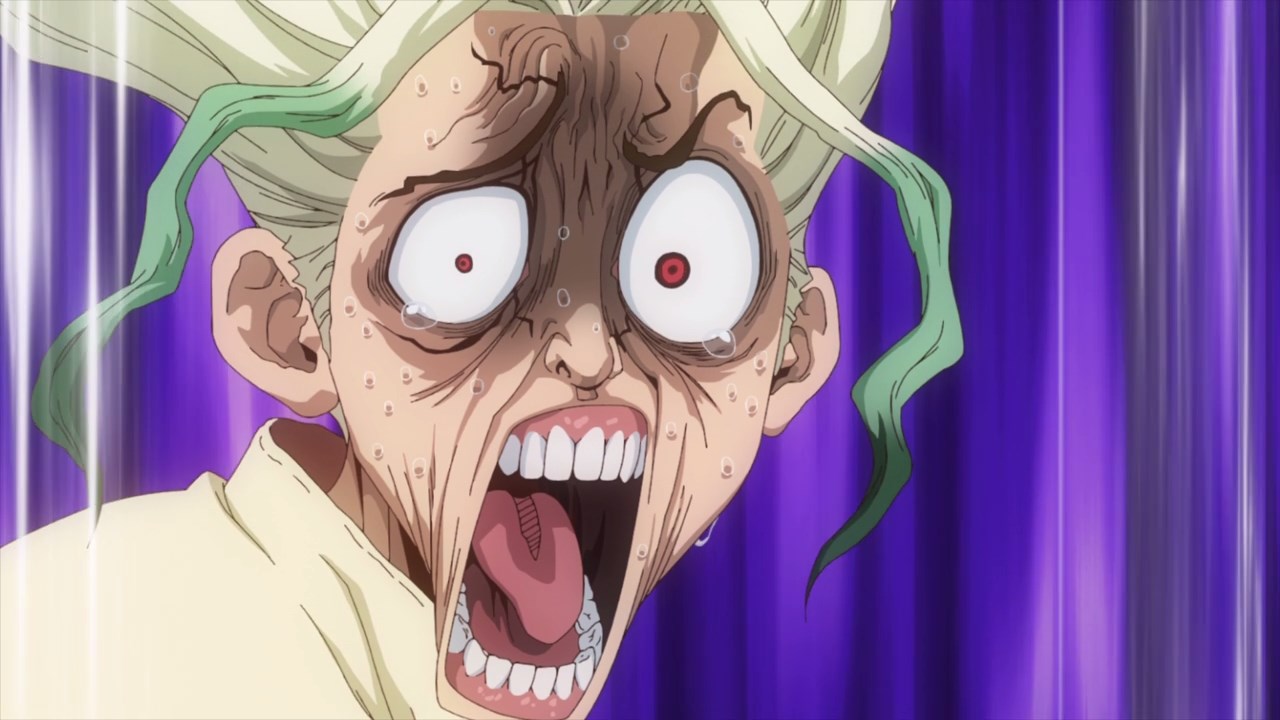 But for Senku though, he’s shocked that his idiot friend showed-off the liquid to Tsukasa Shishio, who plans to revive pure-hearted people while killing off evil ones including adults.

You know what, I think Senku should give the de-petrification liquid to Shishio. Just kidding, as if Senku will give him the entire formula anyways! 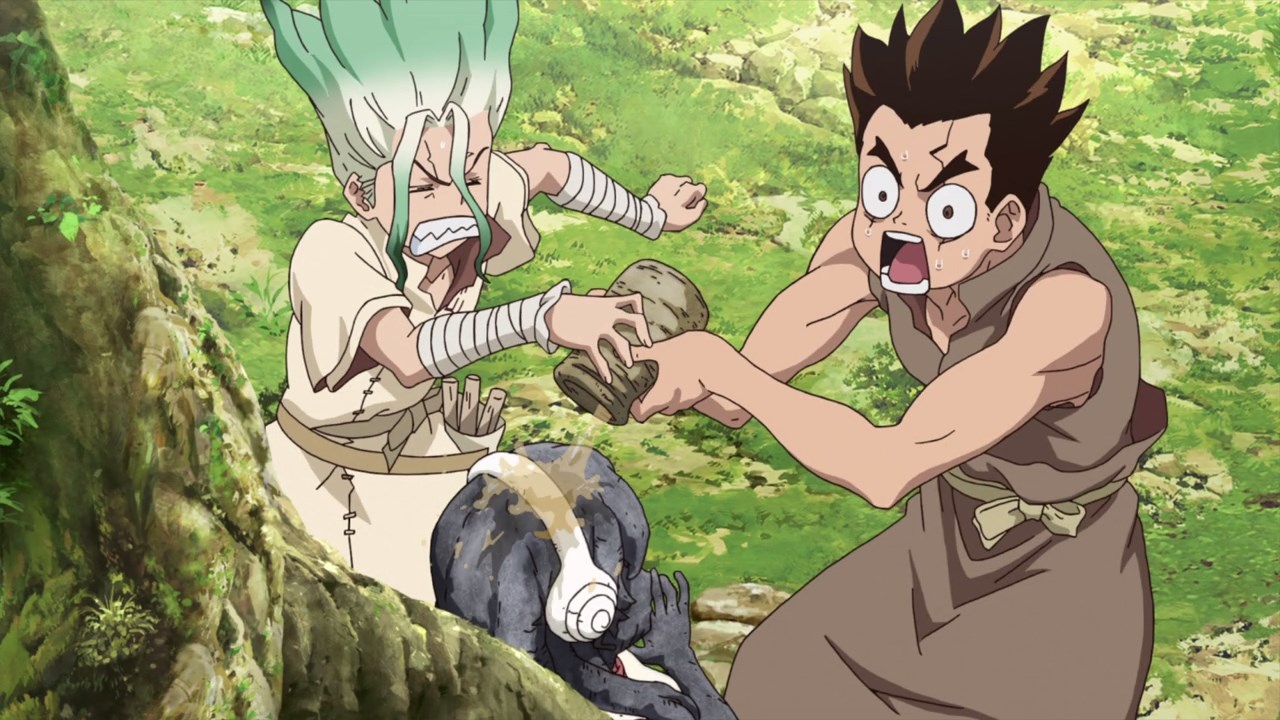 Instead, Senku told Tsukasa to find one of the ingredients for the de-petrification liquid. While Tsukasa Shishio is away, Senku and Taiju Ooki went ahead on reviving Yuzuriha Ogawa.

Of course, Taiju wants to pour the liquid slowly towards Yuzuriha, but Senku wanted to do it as fast as possible. 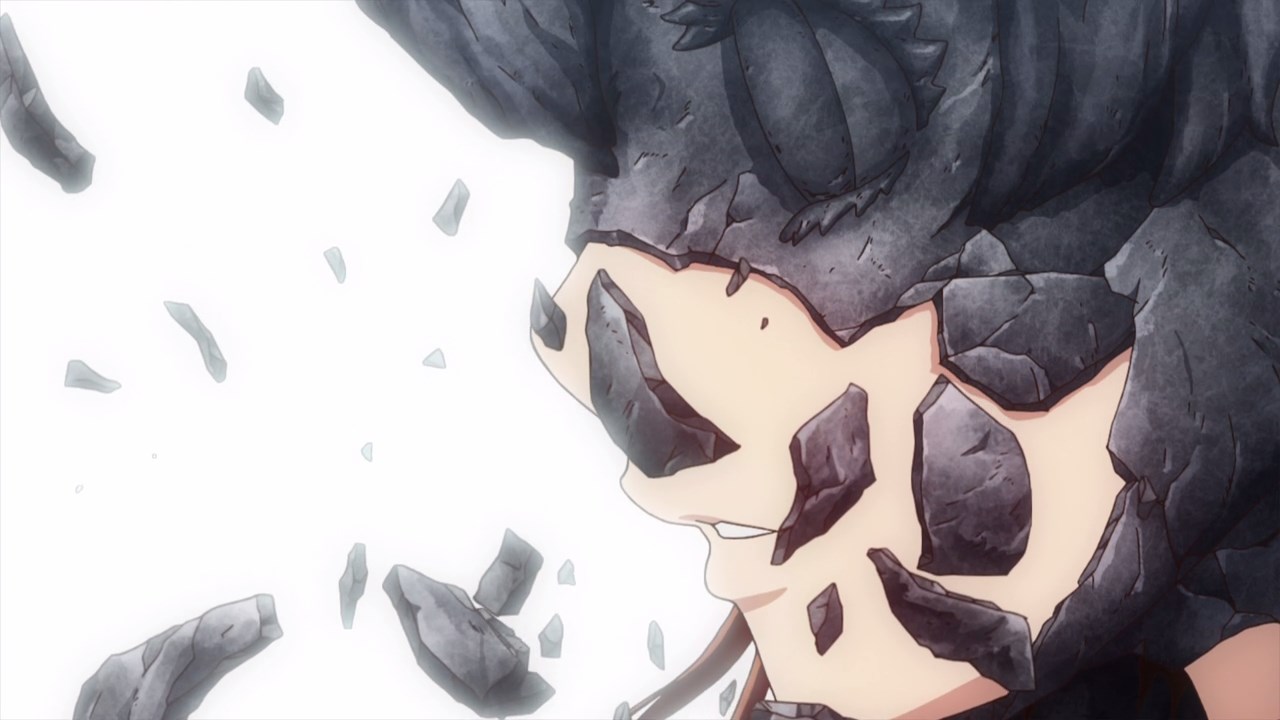 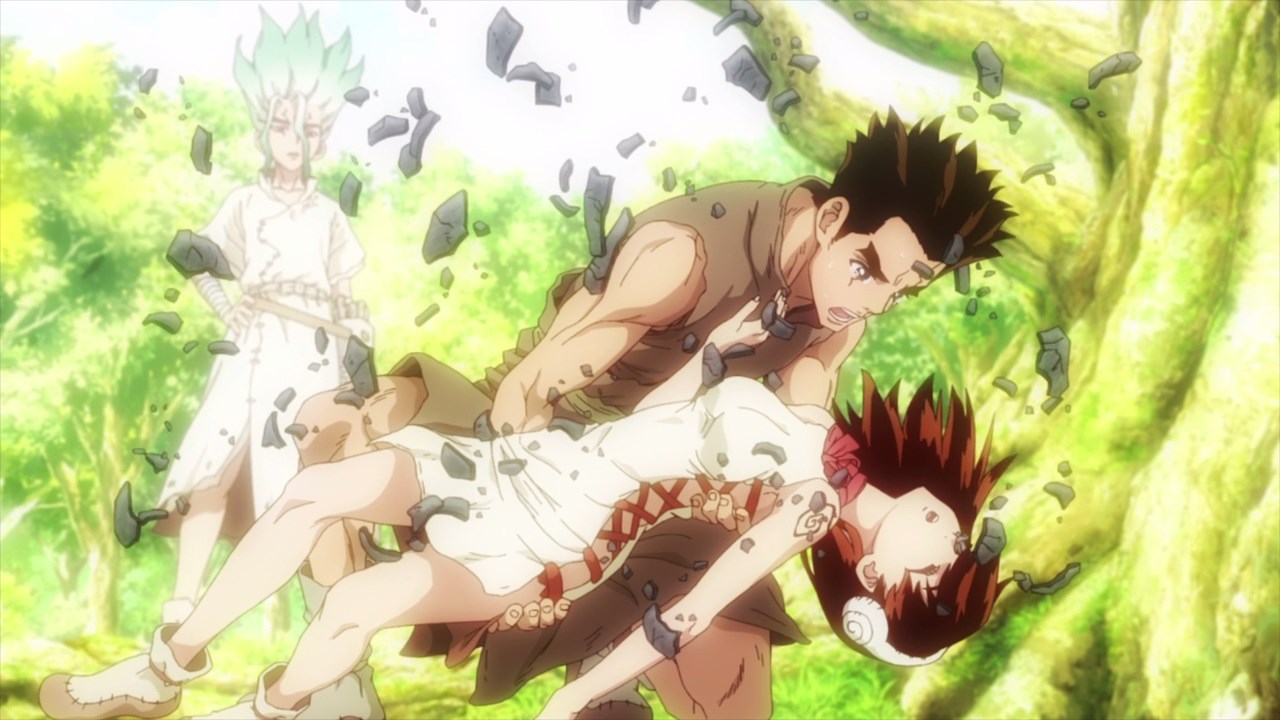 Anyways, Yuzuriha Ogawa is finally revived thanks to the de-petrification liquid. Gotta say that Taiju Ooki is happy to see his crush alive after 3,700 years of being encapsulated in stone. 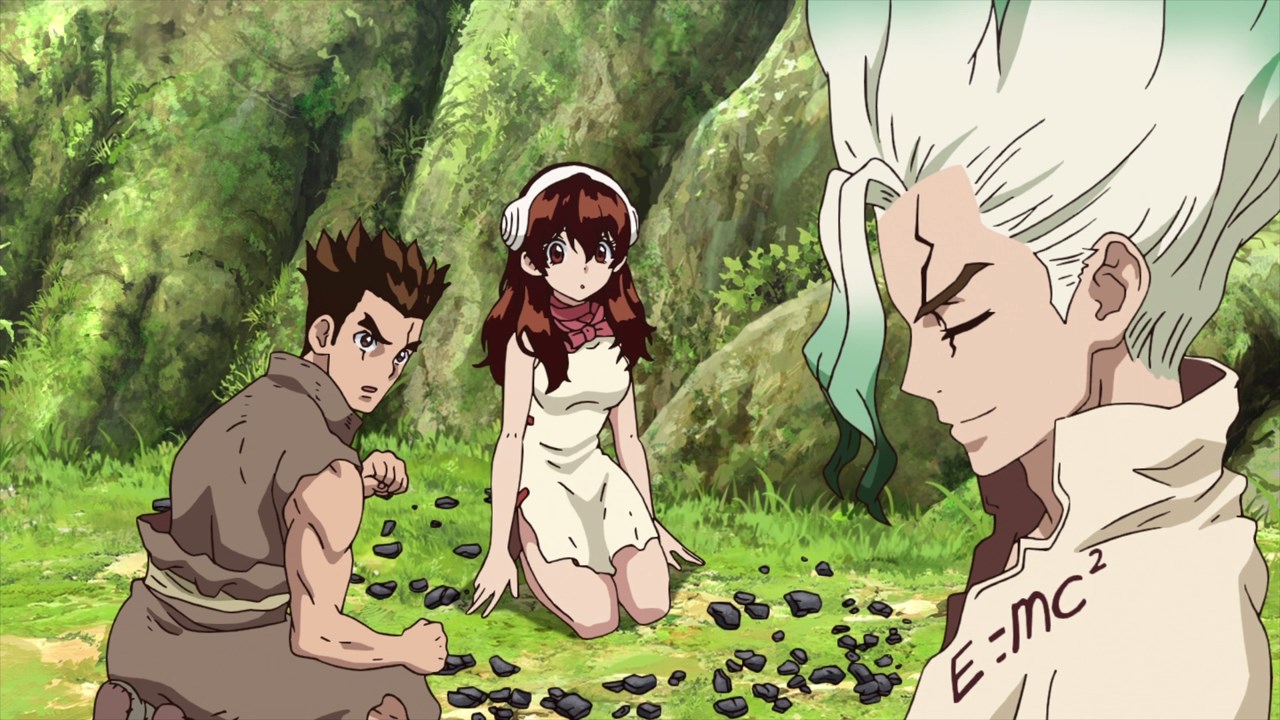 Unfortunately, their happy reunion will be interrupted by Senku as he asked Taiju and Yuzuriha on whether to run away or fight.

Of course, Taiju Ooki decides to fight but here’s the thing though as even though he’s stronger, Taiju couldn’t survive a beatdown… 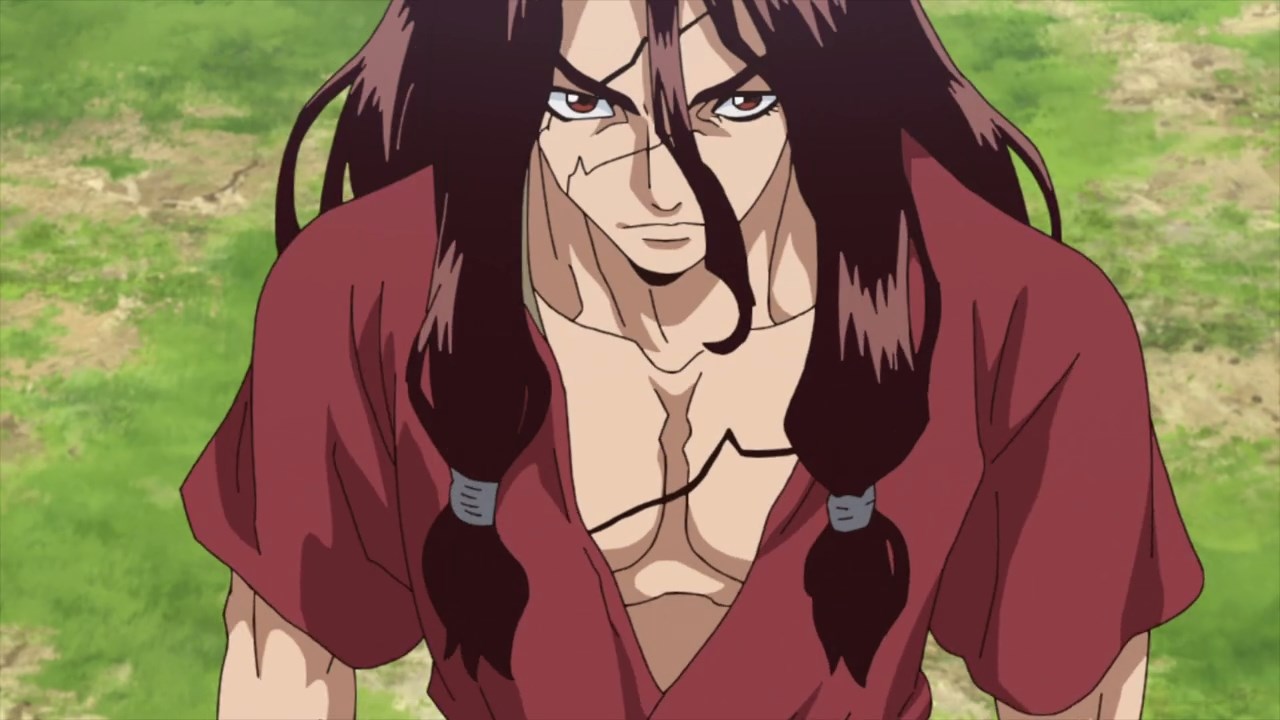 …especially Tsukasa Shishio as he returned from finding one of the ingredients, which is nitric acid made from bat guano. 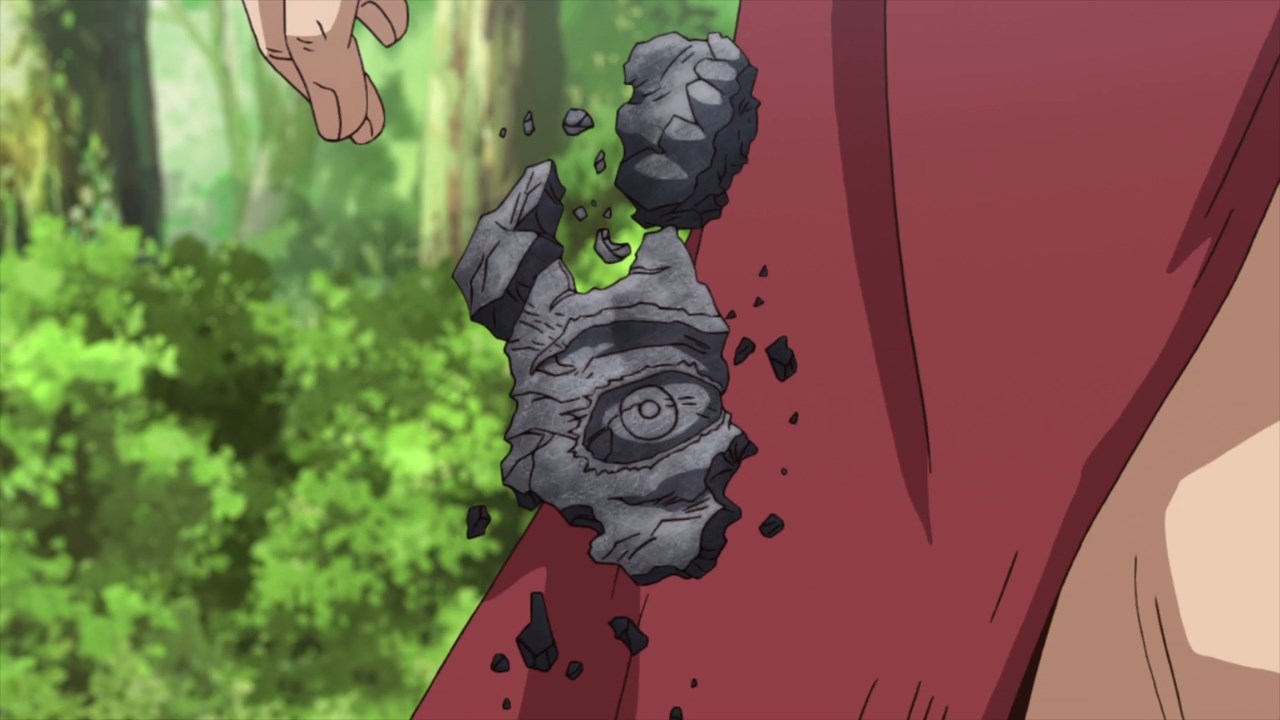 Oh yeah, and he killed some bad people along the way. At this point, fighting Tsukasa head-on is very much a suicide mission. 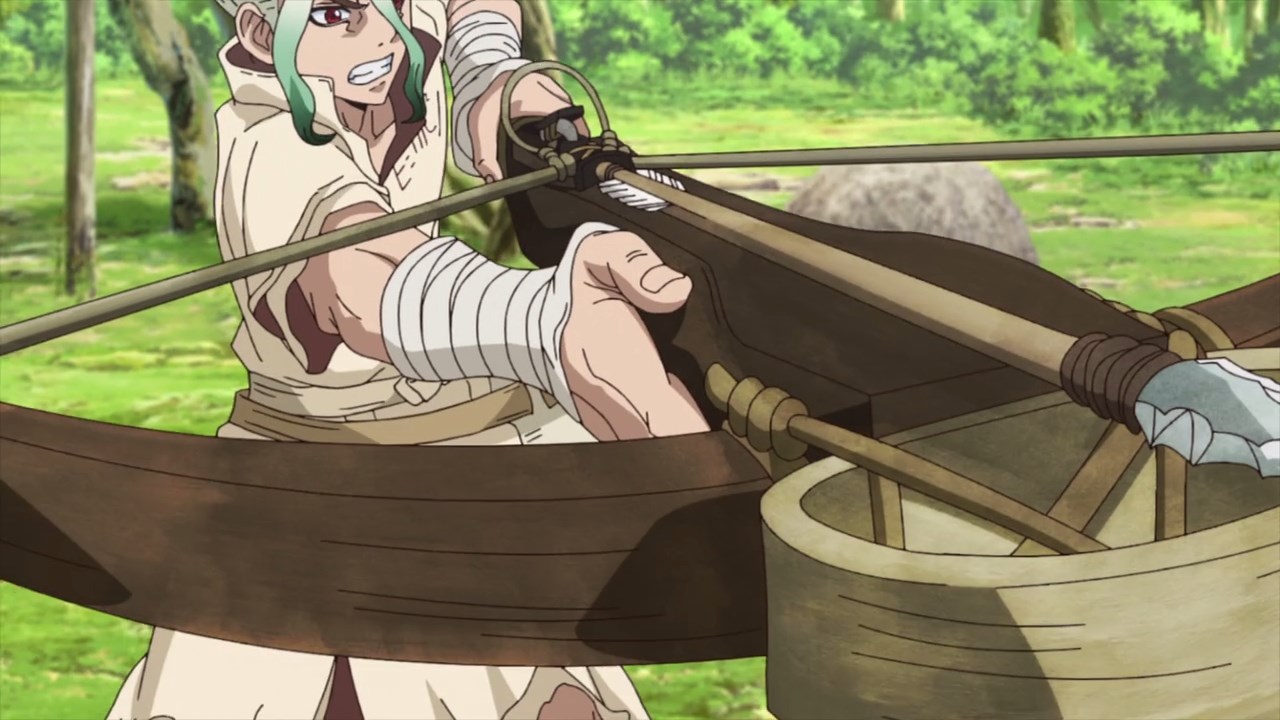 So, Senku decides to take him down at a distance with a crossbow. Spears are good weapons for melee and throwing, but this is Senku we’re talking about as he’ll develop advanced weapons that’ll surpass spears. 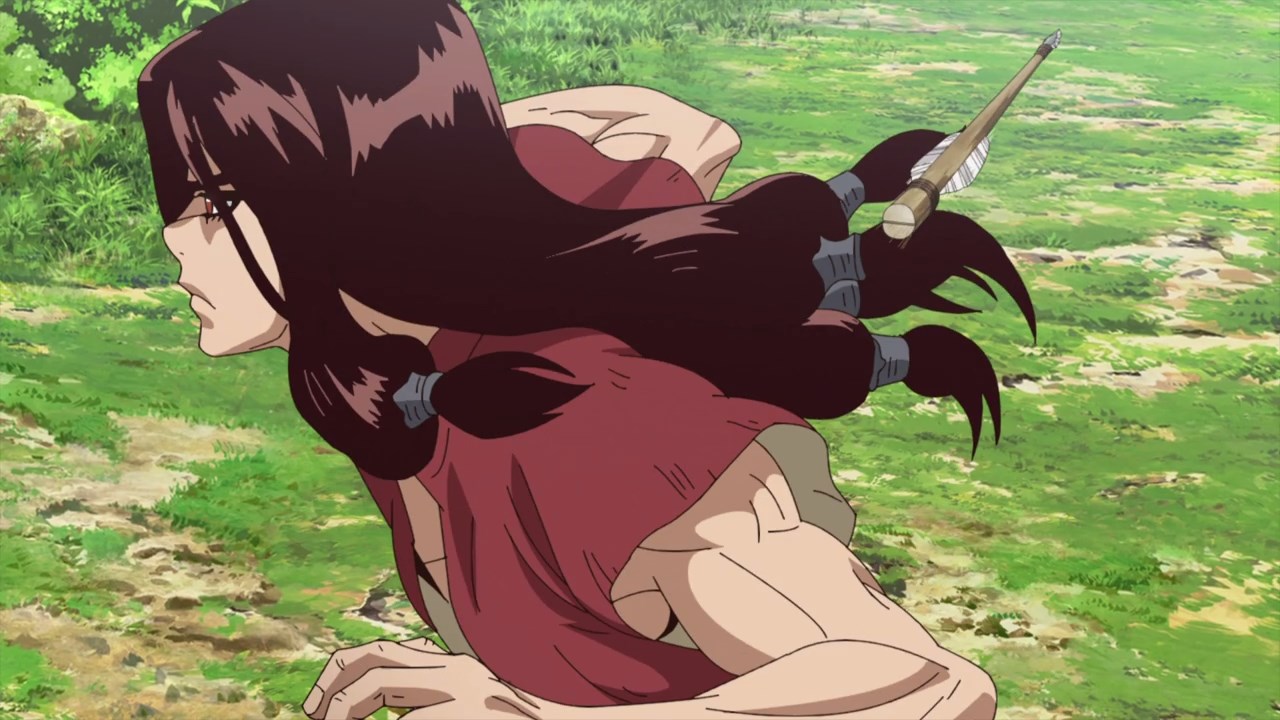 However, it seems that Tsukasa Shishio noticed the crossbow bow and dodge it with lightning-fast reactions. Damn, he’s not only strong but also sharp as well! 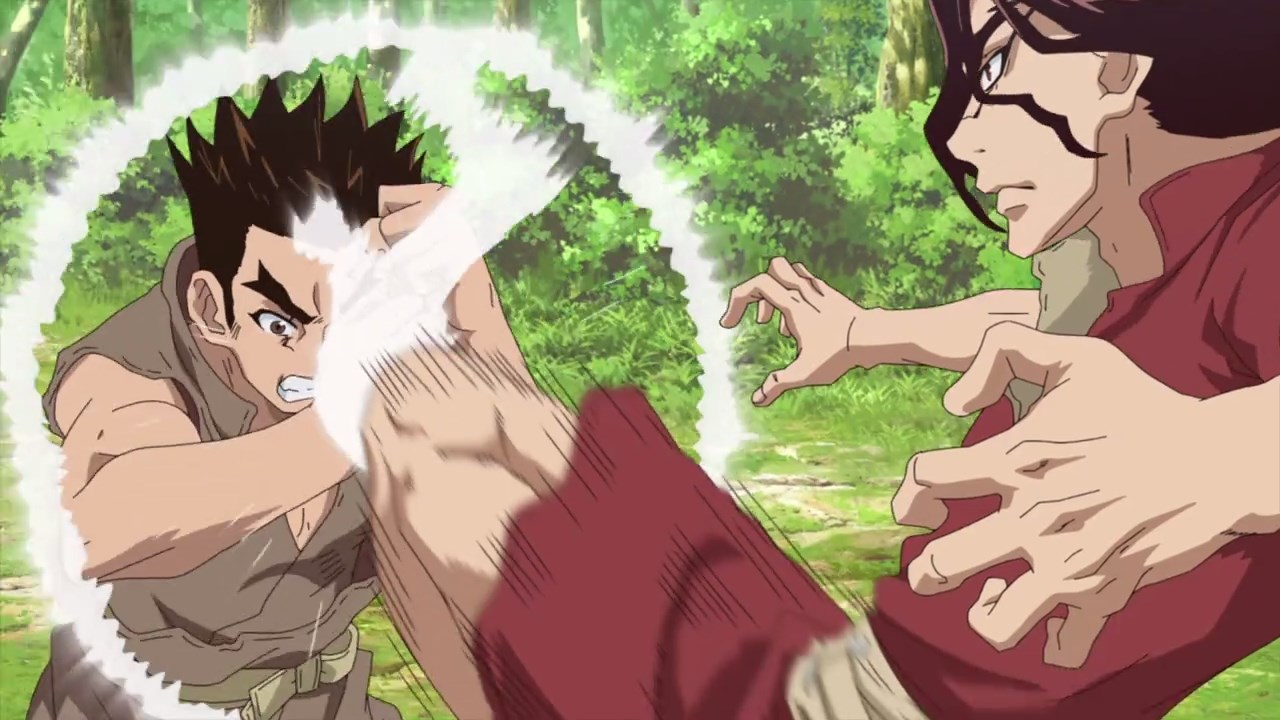 Nevertheless, Taiju Ooki went ahead and fight against Tsukasa Shishio as Taiju took one solid kick from the Lion King! 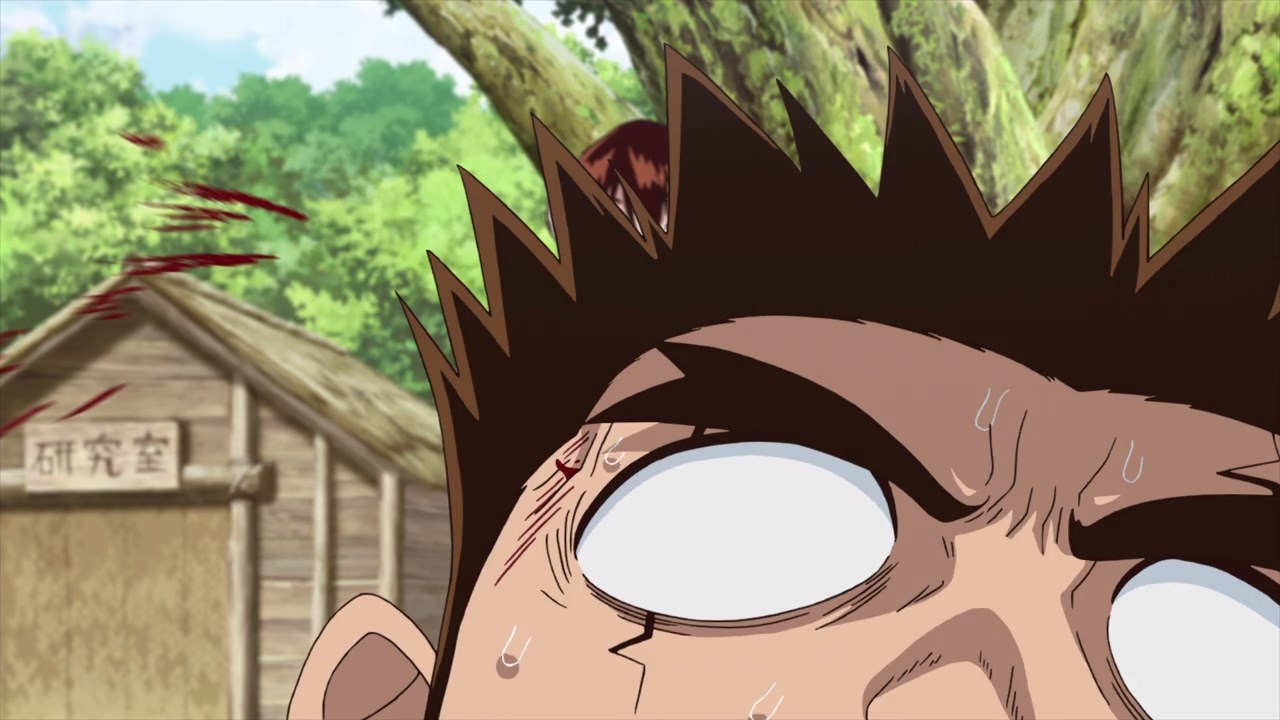 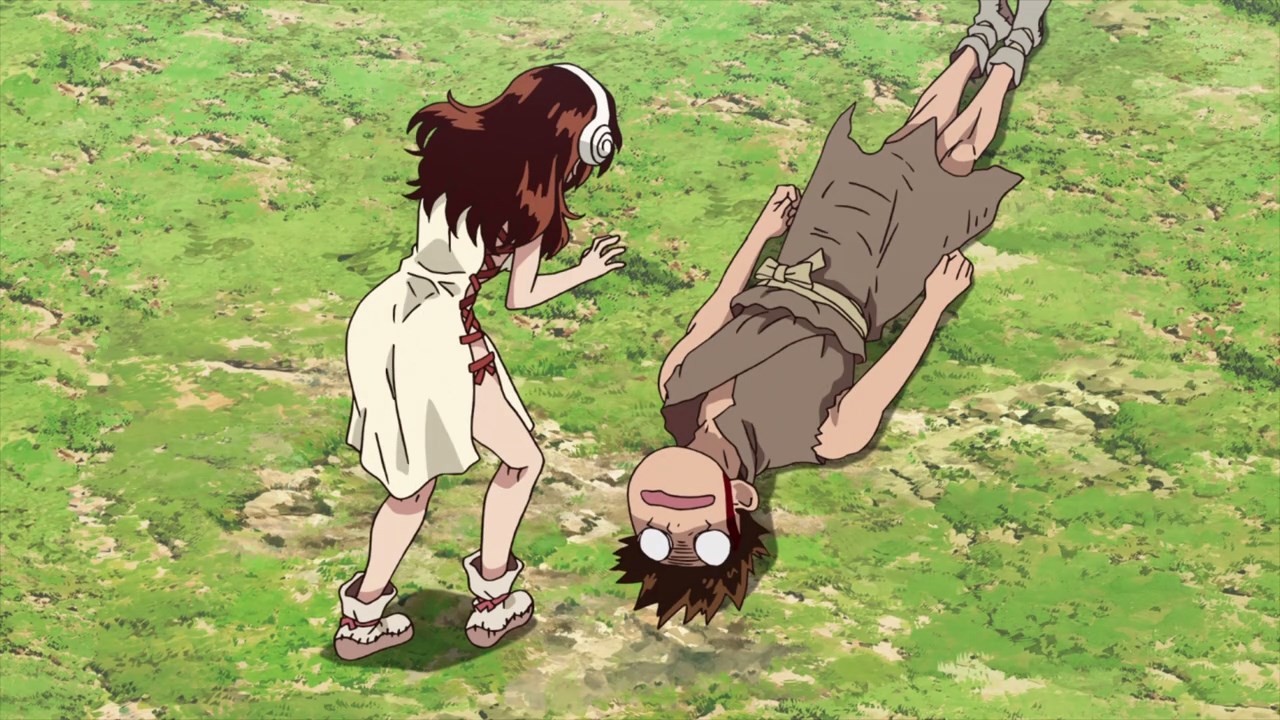 But of course, Tsukasa’s knee strike shocks Taiju’s body that his head is bleeding and pass-out.

Yeah, Taiju Ooki has no chance on beating Tsukasa Shishio. Fortunately, he’s tough enough to survive Tsukasa’s attacks, but I doubt that there won’t be any next time for that big oaf. 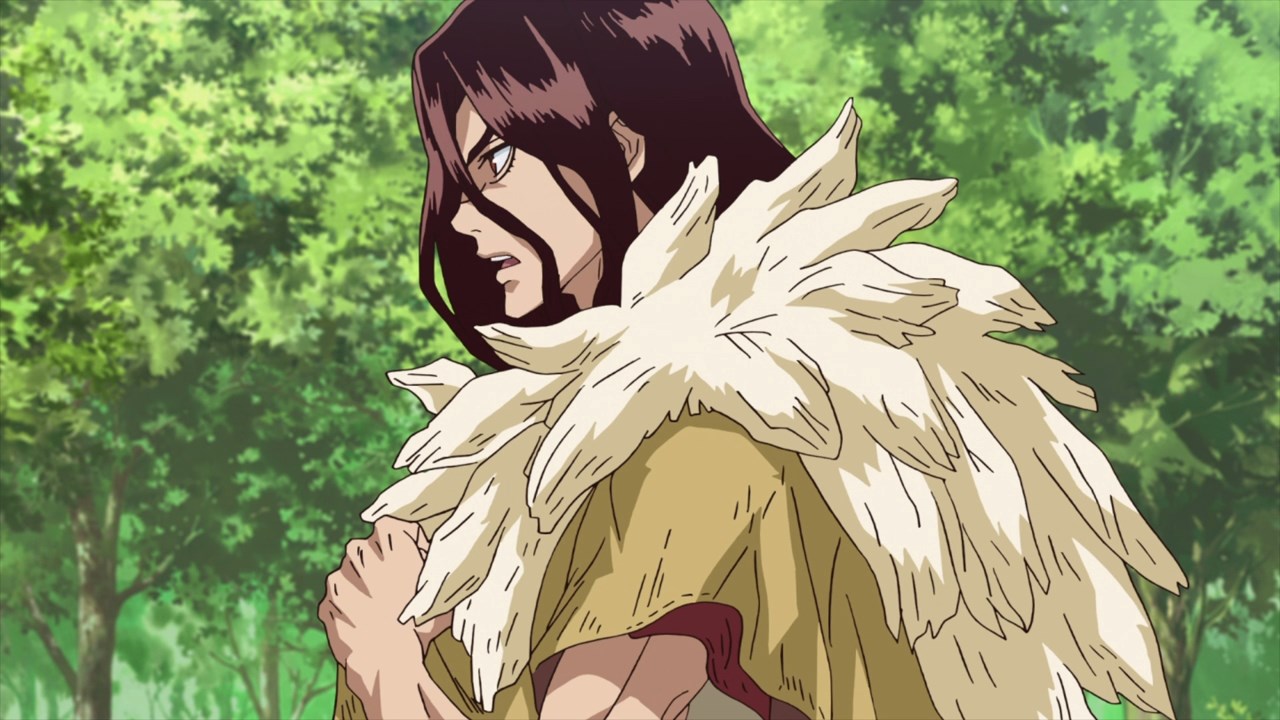 As for Tsukasa Shishio, he’ll continue his crusade of purging wicked people and create a better world, even if Tsukasa will have to crush the likes of Taiju Ooki and Senku. 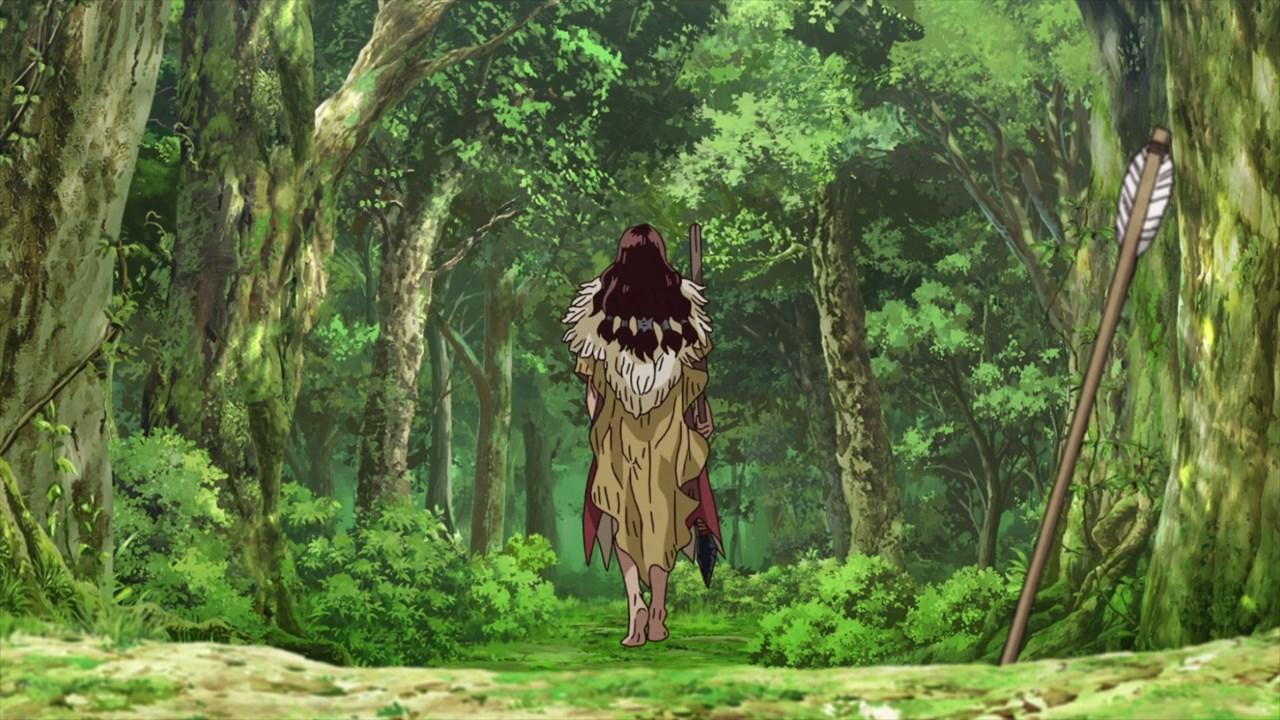 So for the time being, Tsukasa Shishio left the scene and while they’re safe for now, Senku will have to do something in order to stop Tsukasa and his crusade. 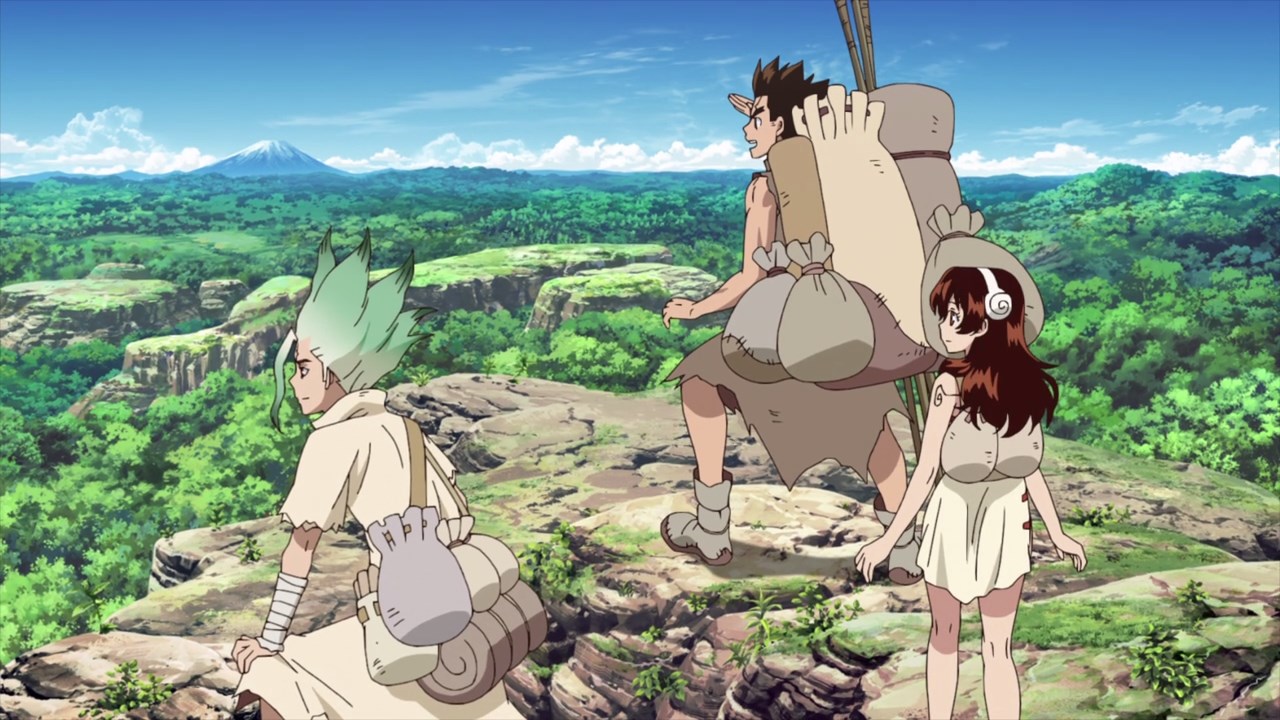 In any case, Senku and his friends will go on a journey towards Hakone while Tsukasa Shishio is still finding the last ingredient for the de-petrification liquid.

C’mon, they’re still in Japan by the way but the problem is that the entire landscape has changed over the past 3,700 years. 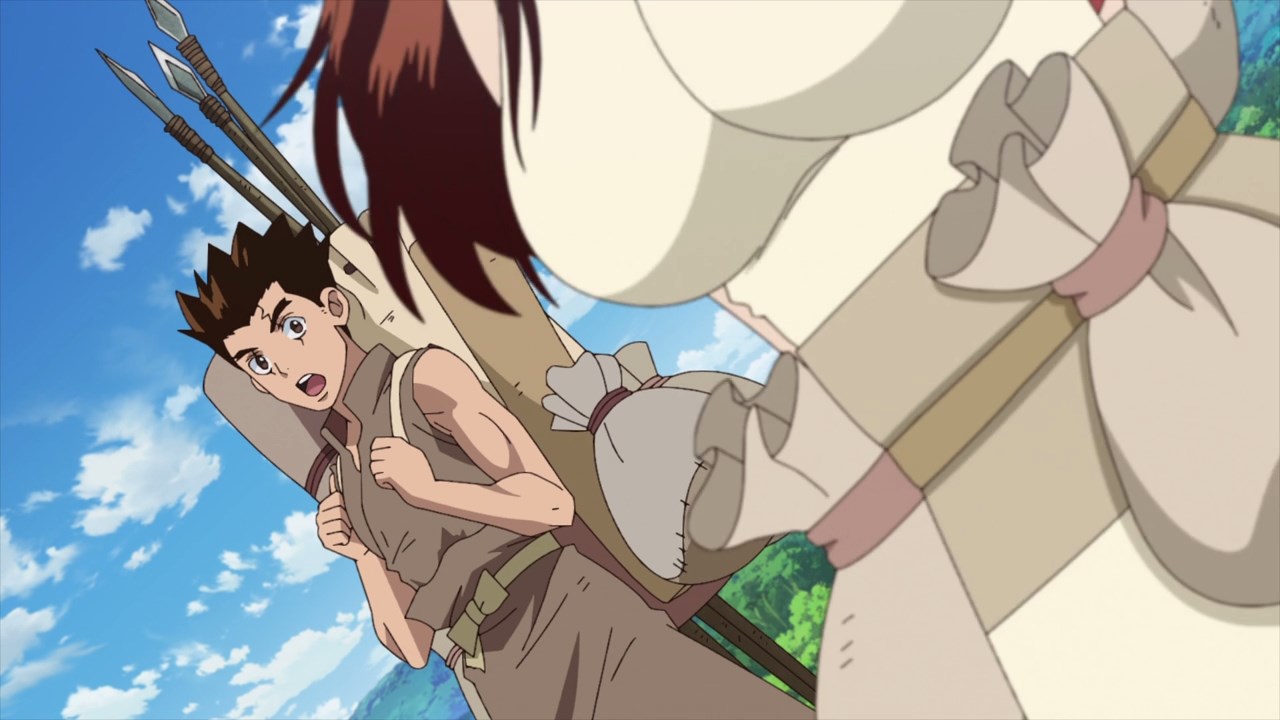 On the other hand, Yuzuriha Ogawa found something over there that Taiju Ooki took notice of it. Wait, did Yuzuriha found a way towards Hakone? 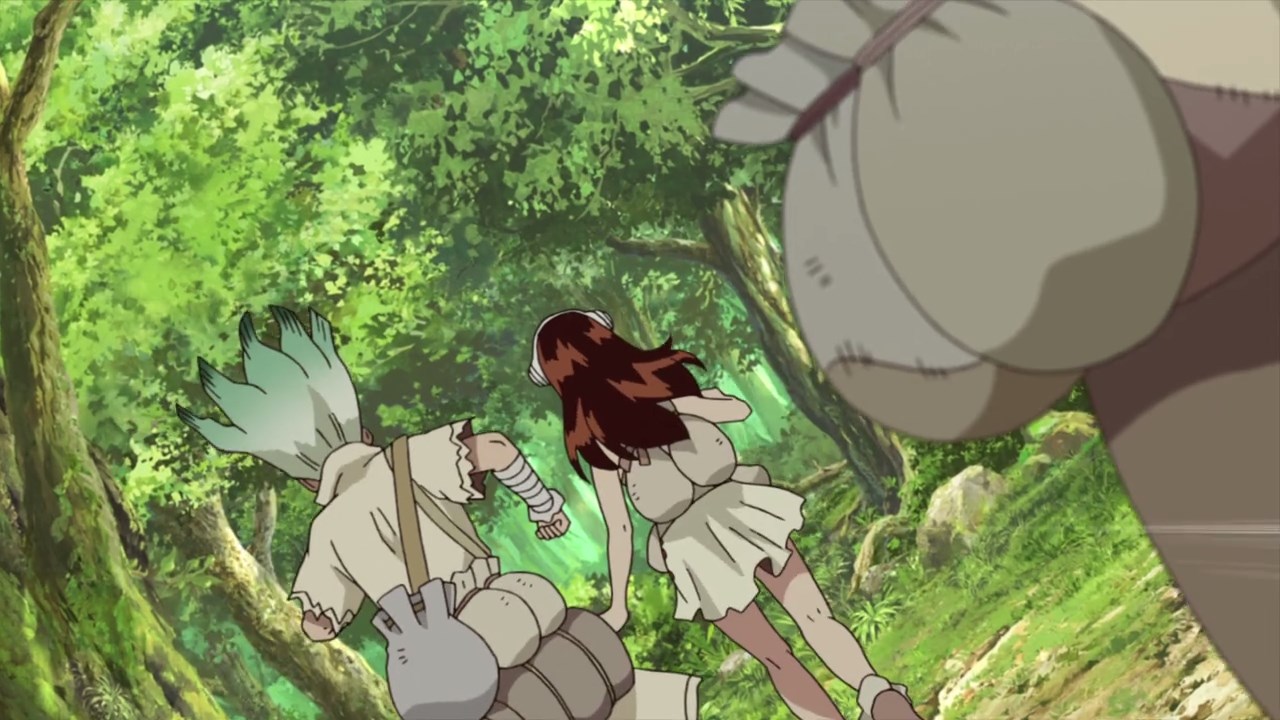 Anyways, both Senku and Taiju followed Yuzuriha until she finally stumble upon something… 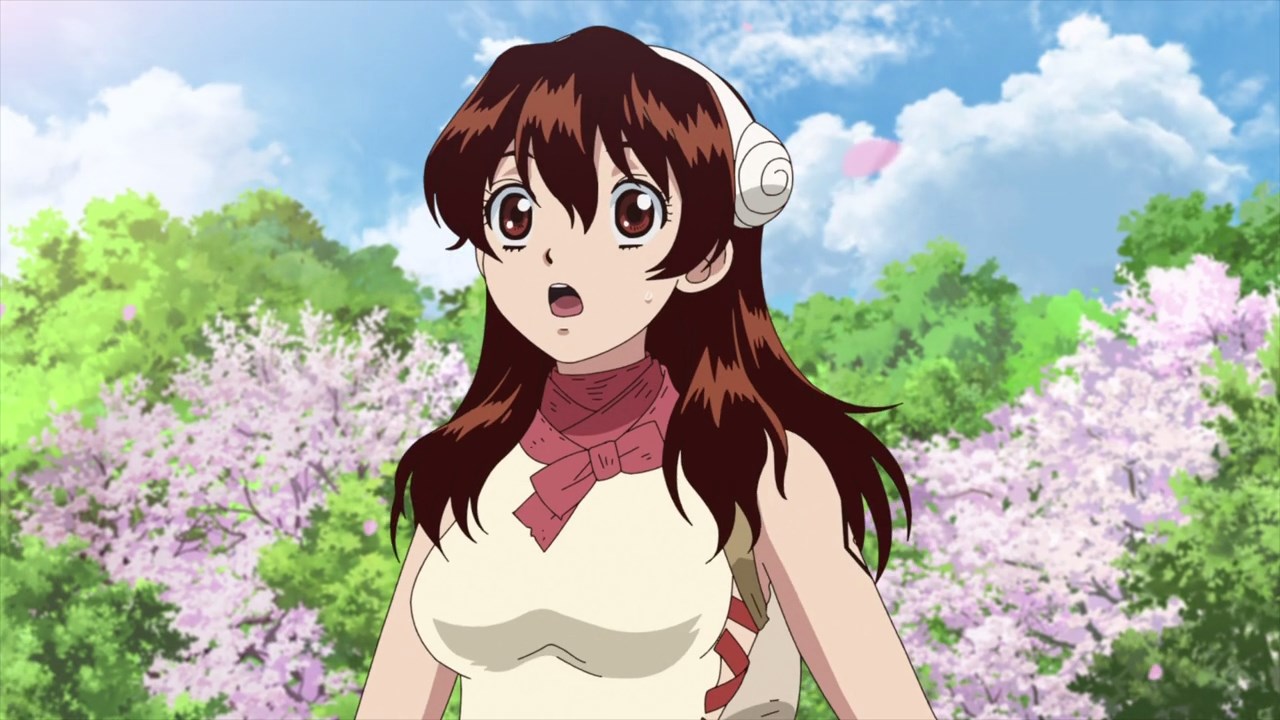 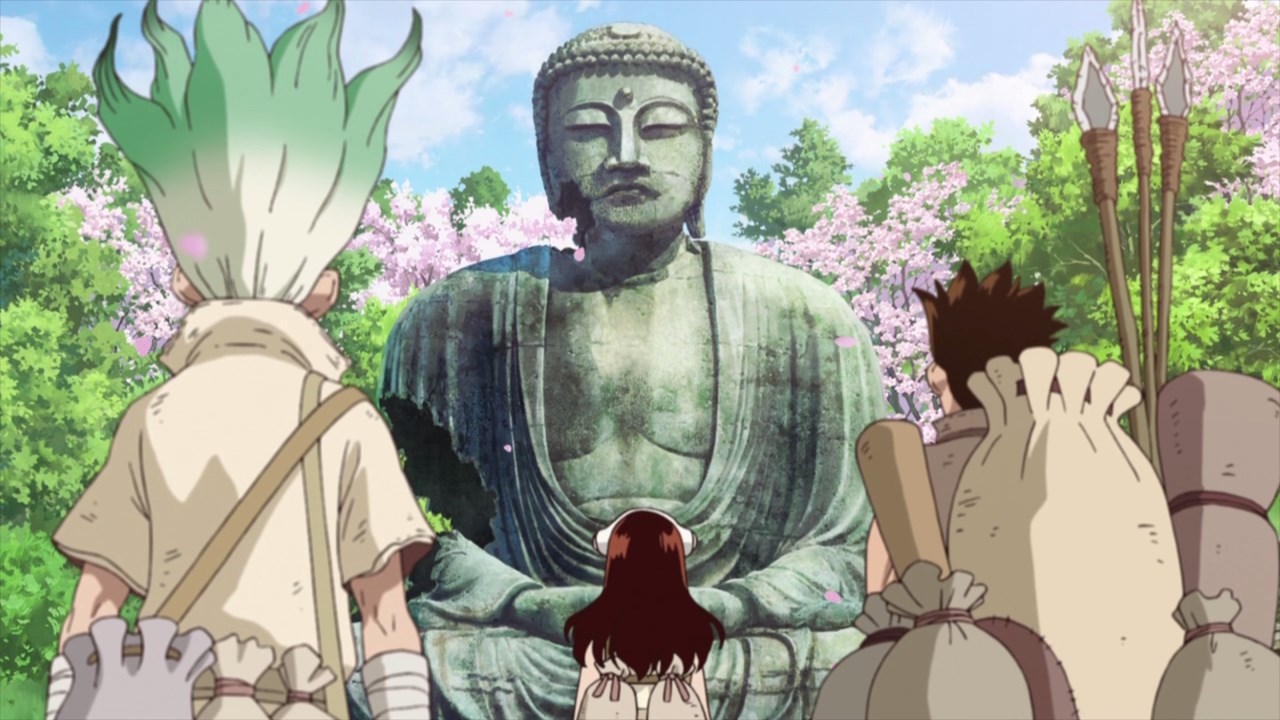 Turns out that Yuzuriha Ogawa found a famous landmark in Kamakura, the Great Buddha Statue. This means that they’re finally close to their destination. 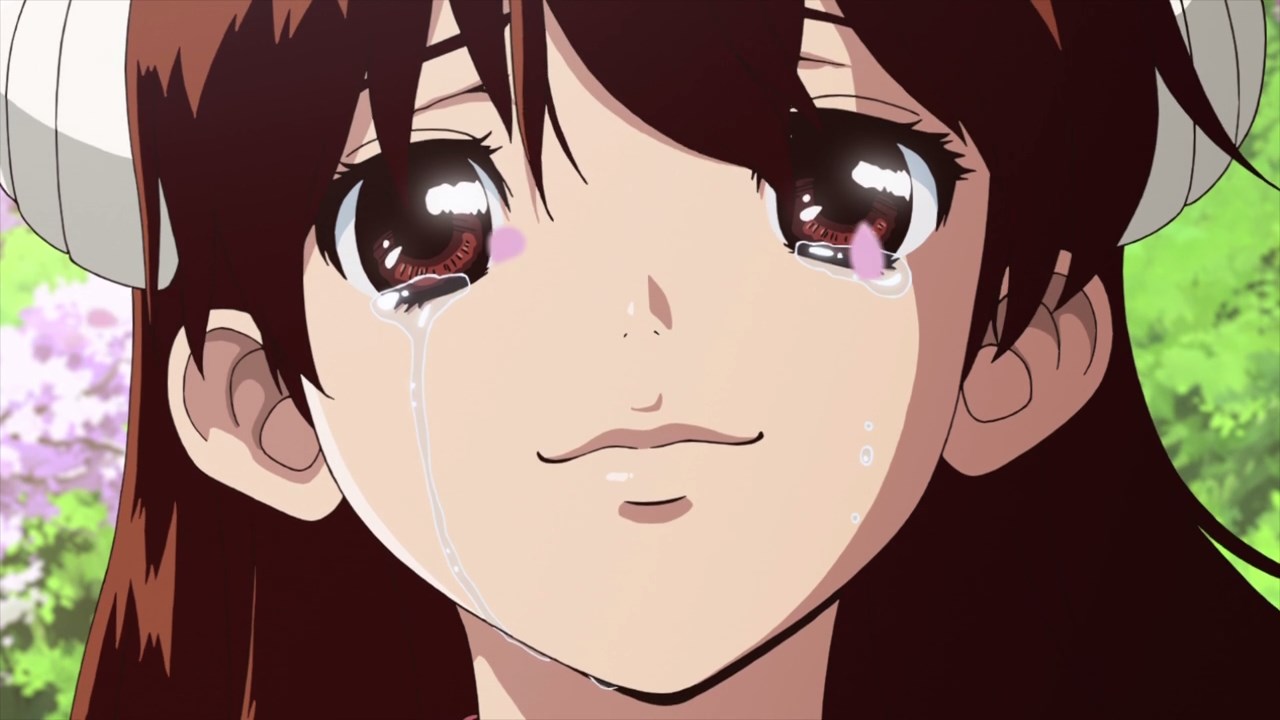 But for Yuzuriha, it seems that she has fond memories of her family upon seeing the Great Buddha Statue.

Even though her parents are no longer with her, Yuzuriha Ogawa will remember those days when she visit the landmark with her family. 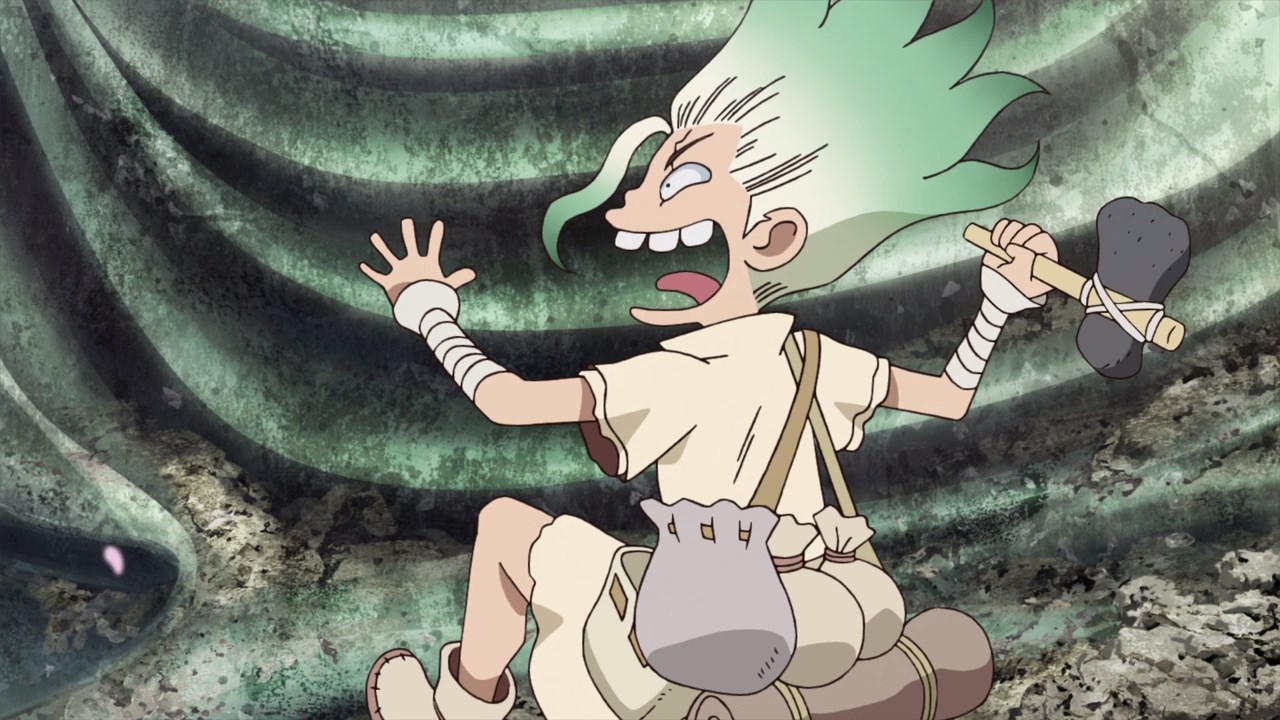 Unfortunately, her fond memories will be crushed by Senku as he’s gonna break the statue to extract bronze in order to create mirrors. Geez Senku, spare the Great Buddha Statue wiil ya! 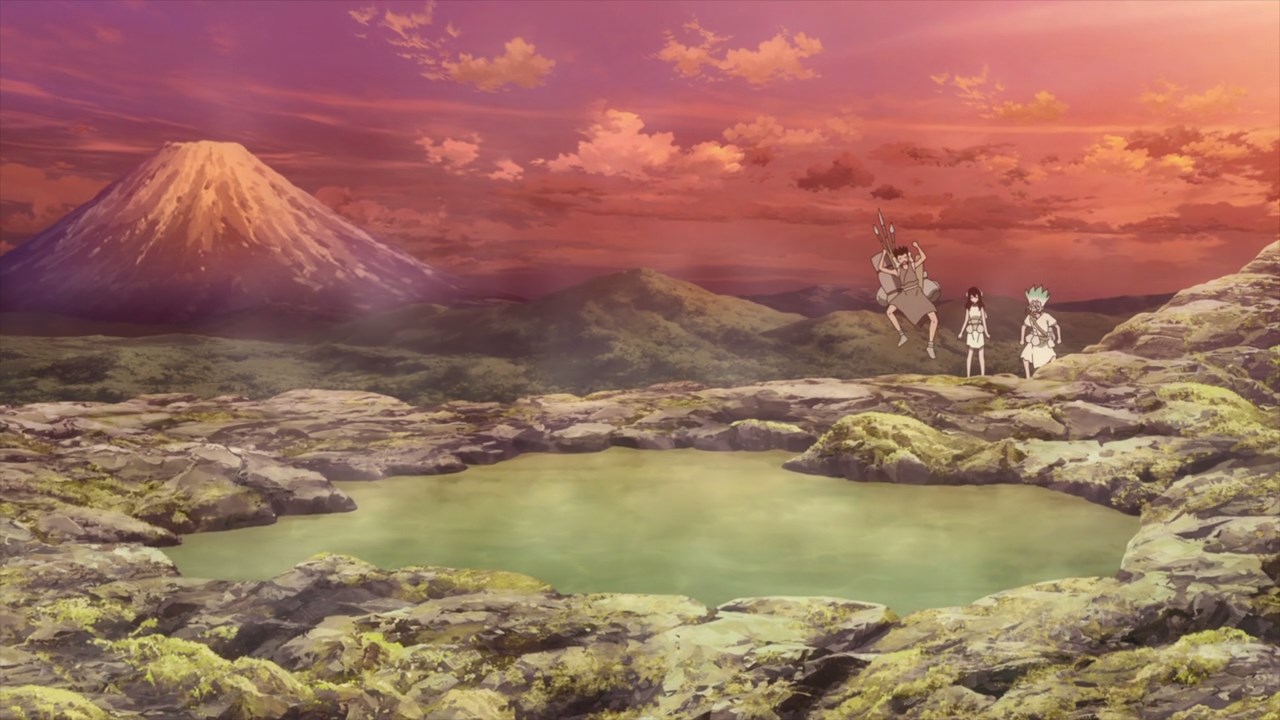 Now then, it appears that they finally arrived at Hakone where it’s famous for their hot springs. While they want to take a break by dipping in after their long journey, Senku is not here to just relax… 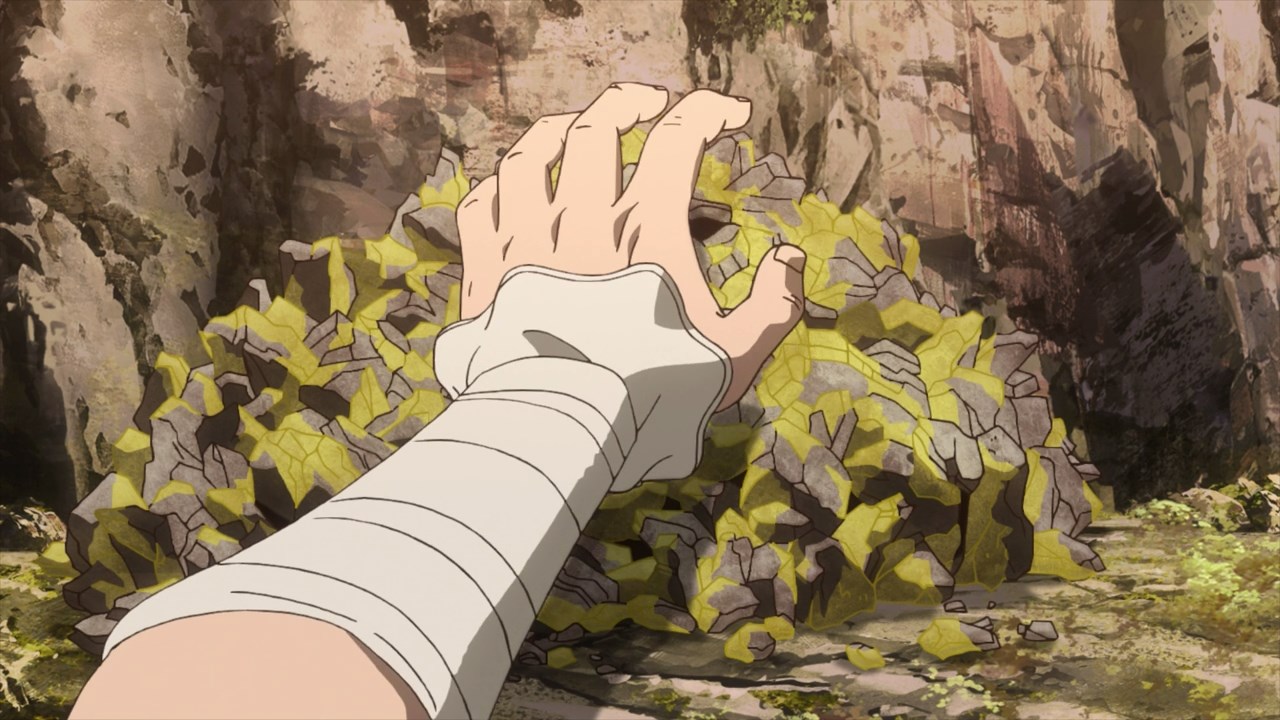 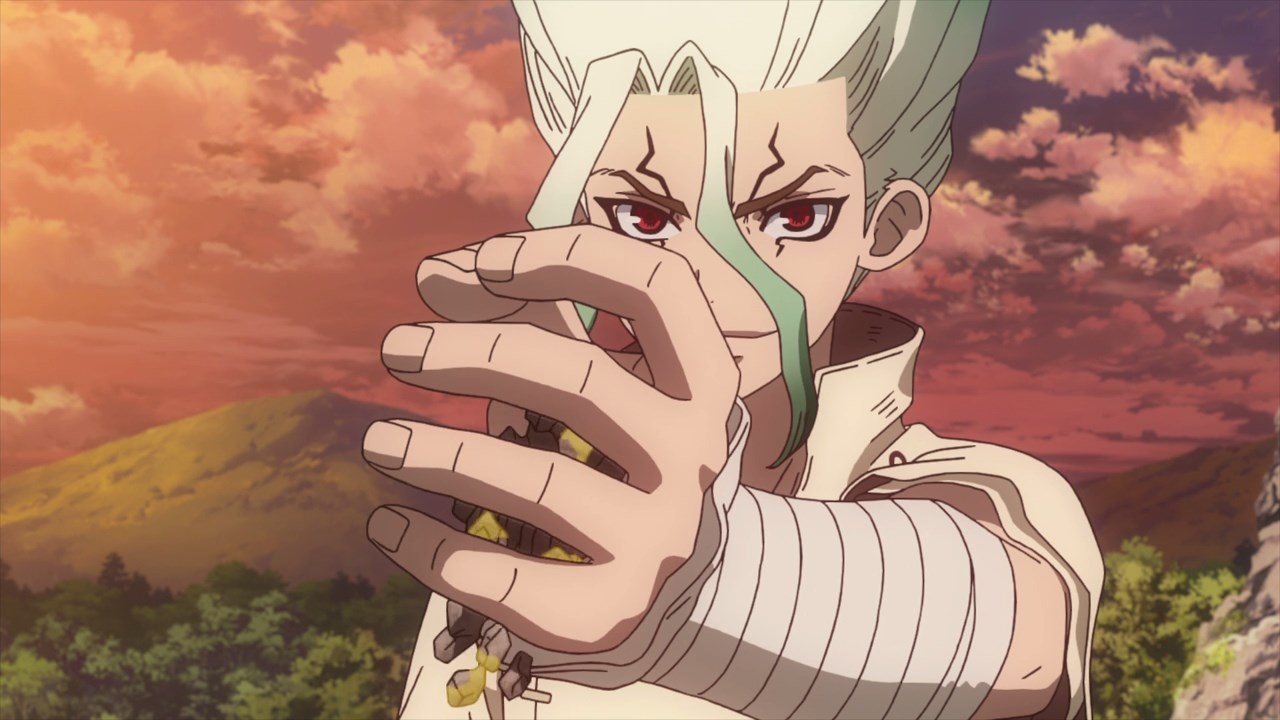 You see, he’s gonna gather sulfur which will be used to create gunpowder (or black powder). That’s right, if crossbows failed to kill the Lion King, making small arms would be the logical step when dealing with Tsukasa Shishio. 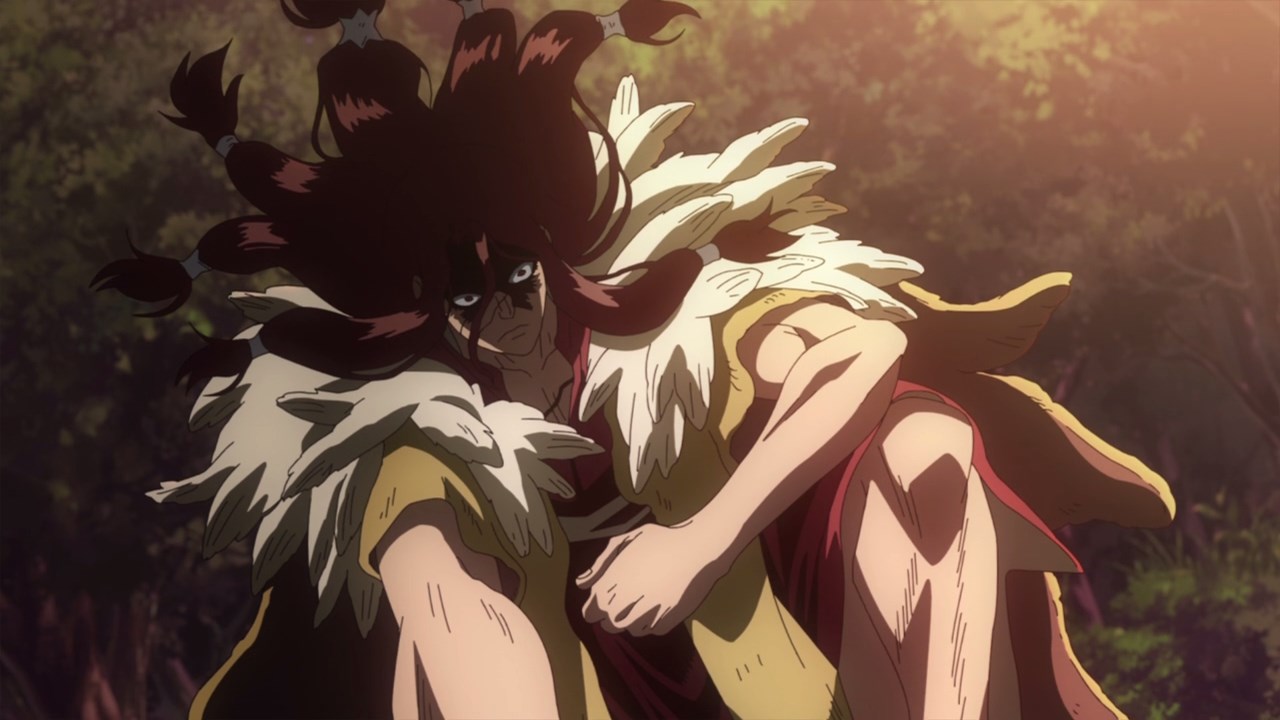 Speaking of Tsukasa Shishio, he realized that Senku and his friends went to Hakone to develop weapons against him. Of course, will Senku managed to develop firearms on stopping the Lion King, or will Tsukasa finally found the last ingredient for the de-petrification liquid and use it to his followers?

In any case, it’s gonna be a race to see who will take advantage in this stone world as I’ll see you next time!