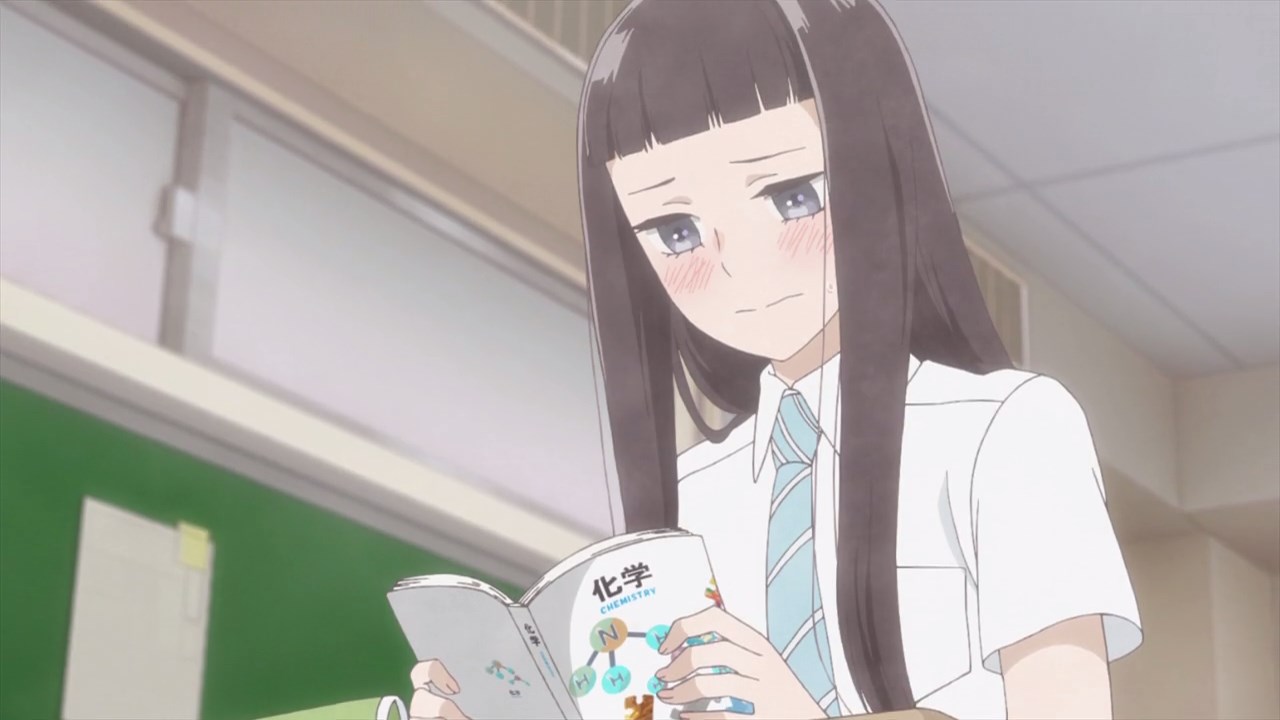 On this episode, I’m surprised to see Rika Sonezaki’s new look that everyone thought that she was ugly before, but now they’re starting to take it back. What hypocrites they are! 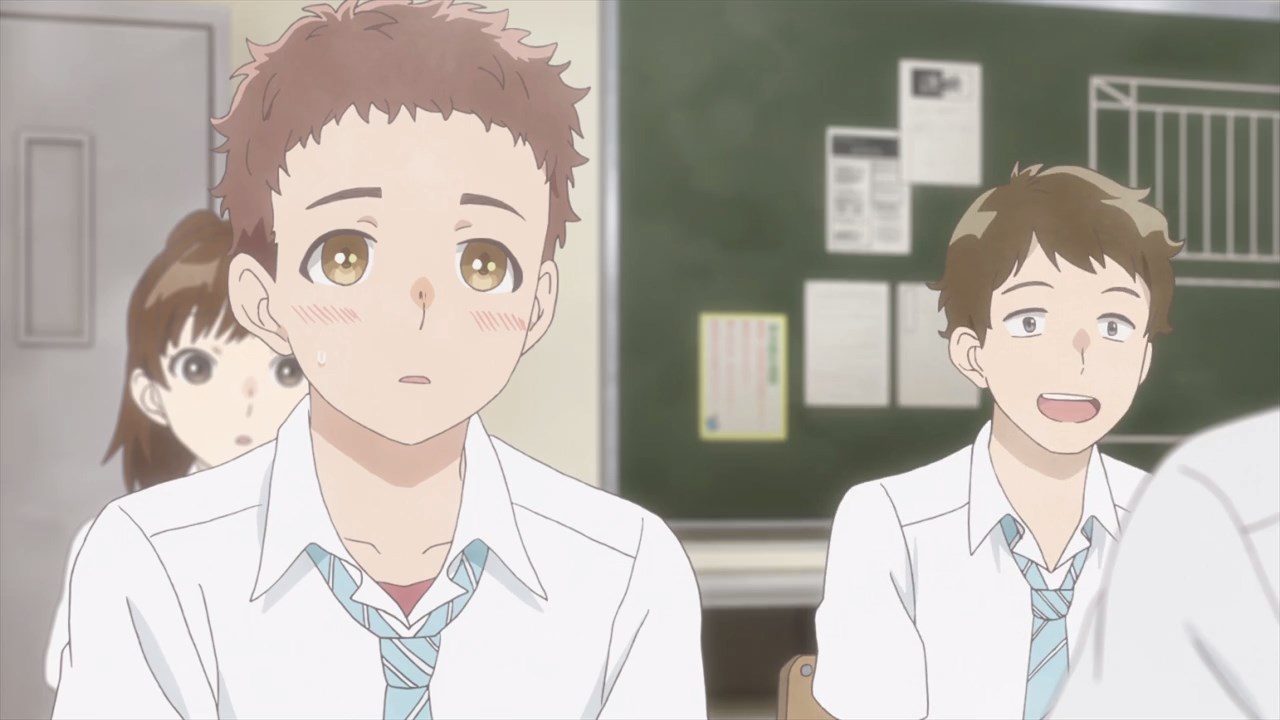 Of course, there’s Shun Amagiri who is kinda attracted to Rika’s new appearance, although he still considers Sonezaki as a cutie despite ditching those glasses. I wonder if Rika is wearing eye contacts though? 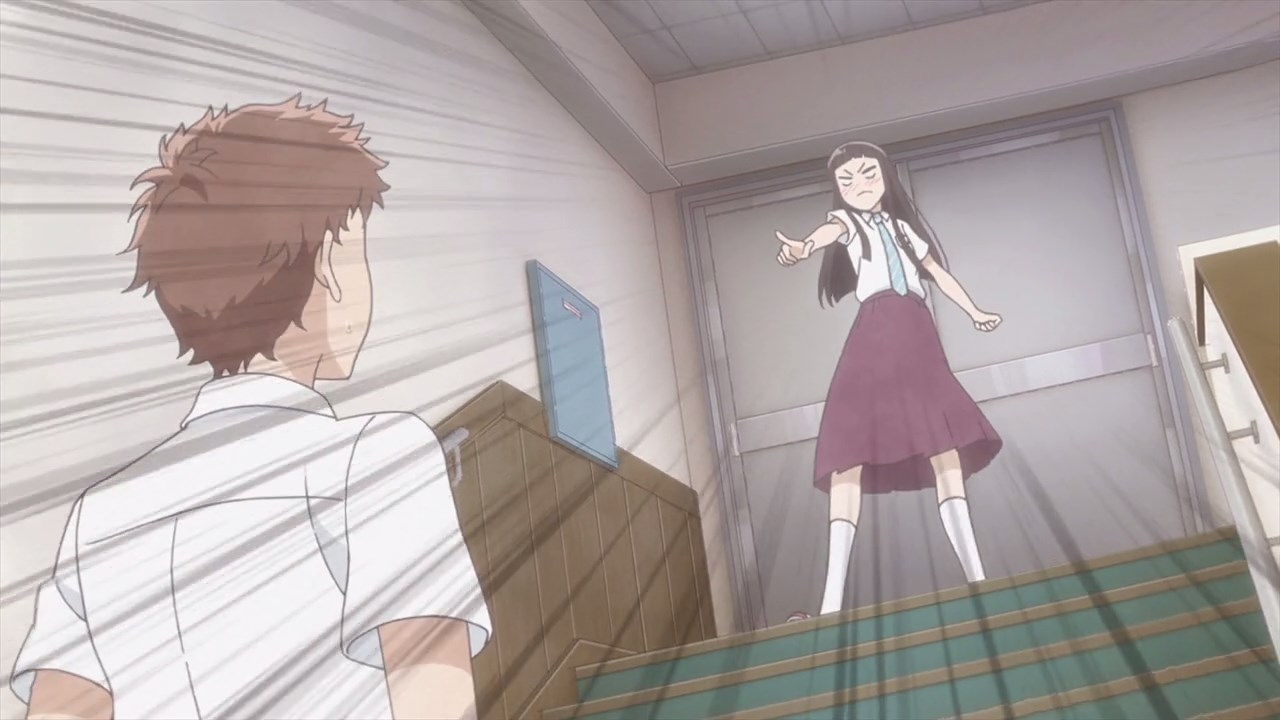 Oh yeah and speaking of Rika, she told him to make a 50-page essay if Shun wants to date her. C’mon, she’s not yet ready to start a romantic relationship with the opposite sex. 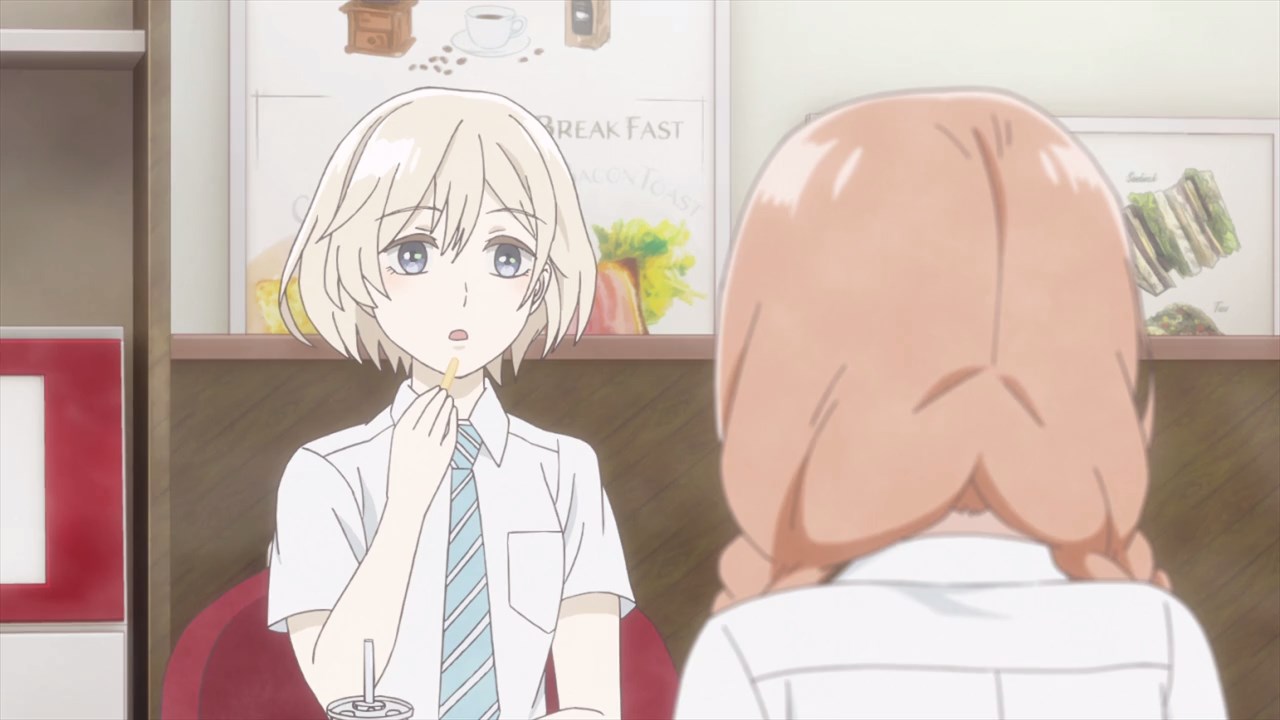 Meanwhile, it seems that there’s one girl who’s very unsure on getting a boyfriend because she didn’t experience falling in love yet. 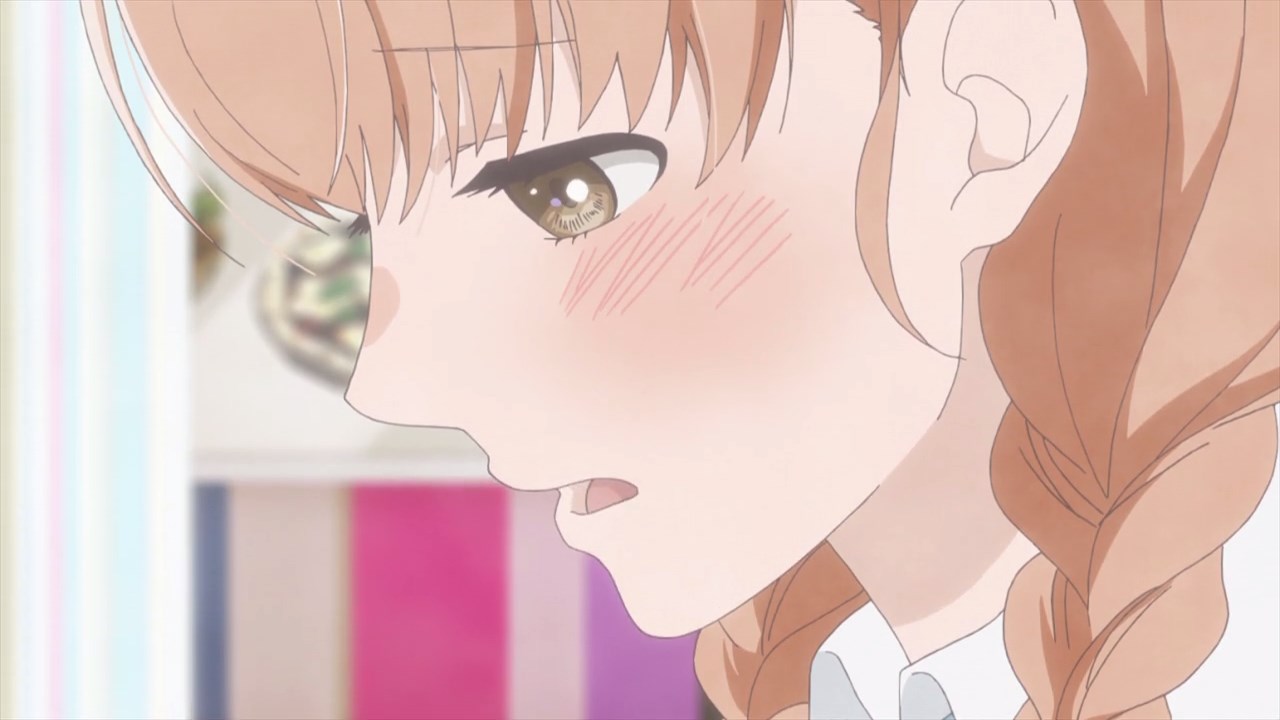 I’m talking about Momoko Sudou as she’s the only one who haven’t set her sight on someone yet.

Sure that her club-mates are getting curious on intimate relationships with a boy, but Momoko felt frustrated that she was kept out of the loop. Y’know what, I’m sure that someone would notice Sudou. 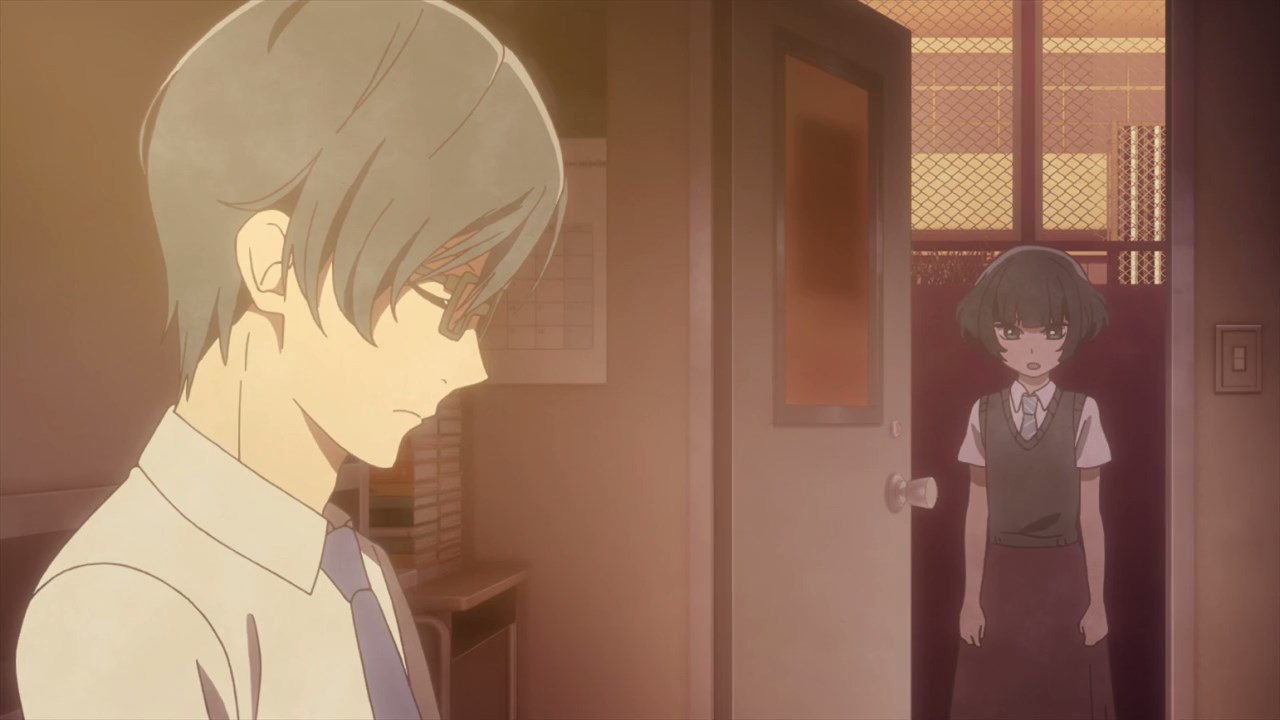 Moving onto Hitoha Hongou where she asked Milo or should I say Tomoaki Yamagishi on why he choose the name “Milo” and why he escaped on that day.

Sure that the name Milo came from a drink, but there’s a reason why Yamagishi-sensei chose it. 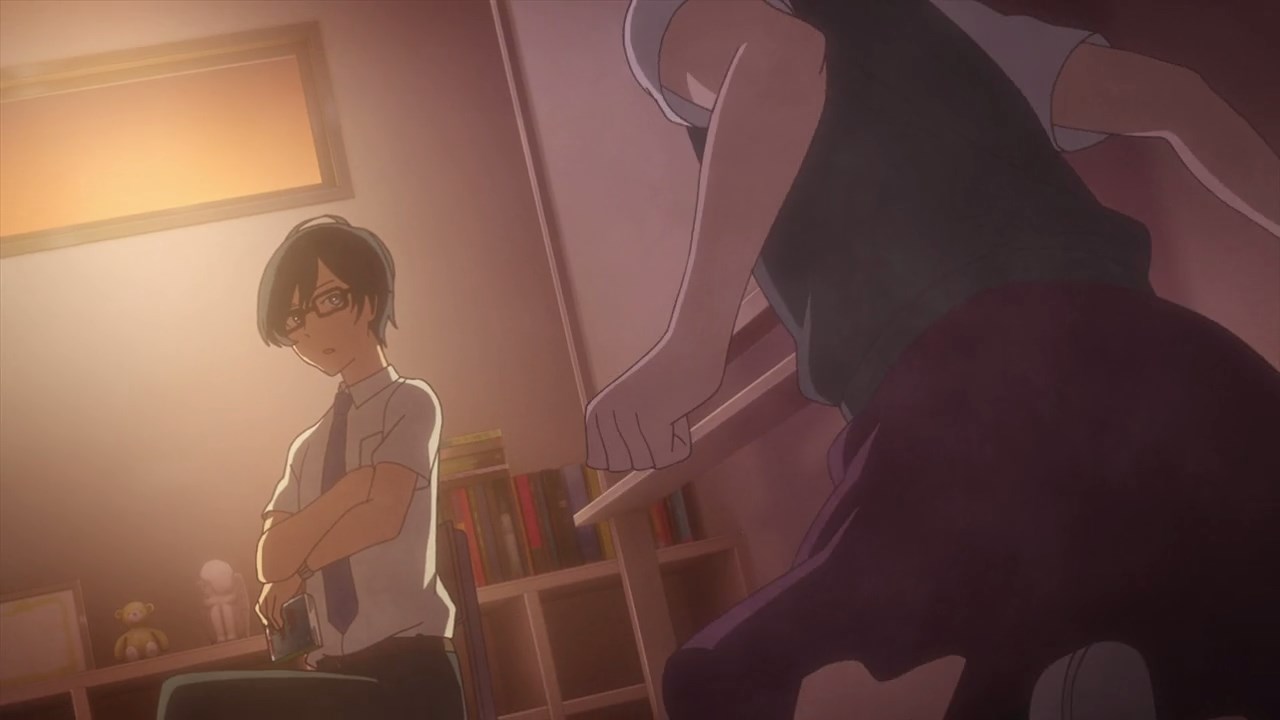 You see, Yamagishi-sensei is a weak person who often goes to a hospital for checkups. Despite being weak, he daydreams of being the strongest person ever.

Oh yeah, and as for the reason why Tomoaki Yamagishi left on the day he was suppose to meet someone online (which turn out to be Hitoha Hongou)? Well it’s not only obvious that he doesn’t want to get fired for dating with a teacher, but Yamagishi-sensei doesn’t like high school girls because they’re immature, much like Hitoha’s novel in which it’s unrefined and clichéd. 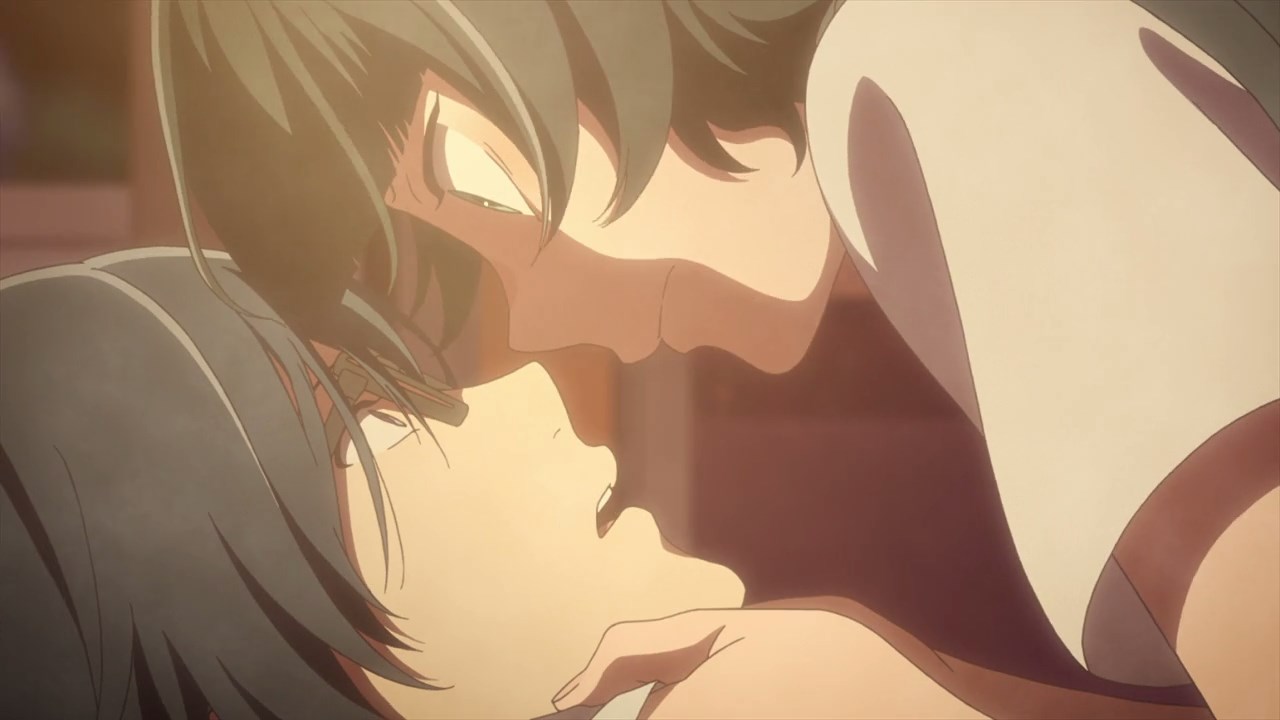 That didn’t sit Hitoha well as she pounced on top of Yamagishi-sensei. Then again, you know that he might get into trouble when a high school girl is sitting on top of him. 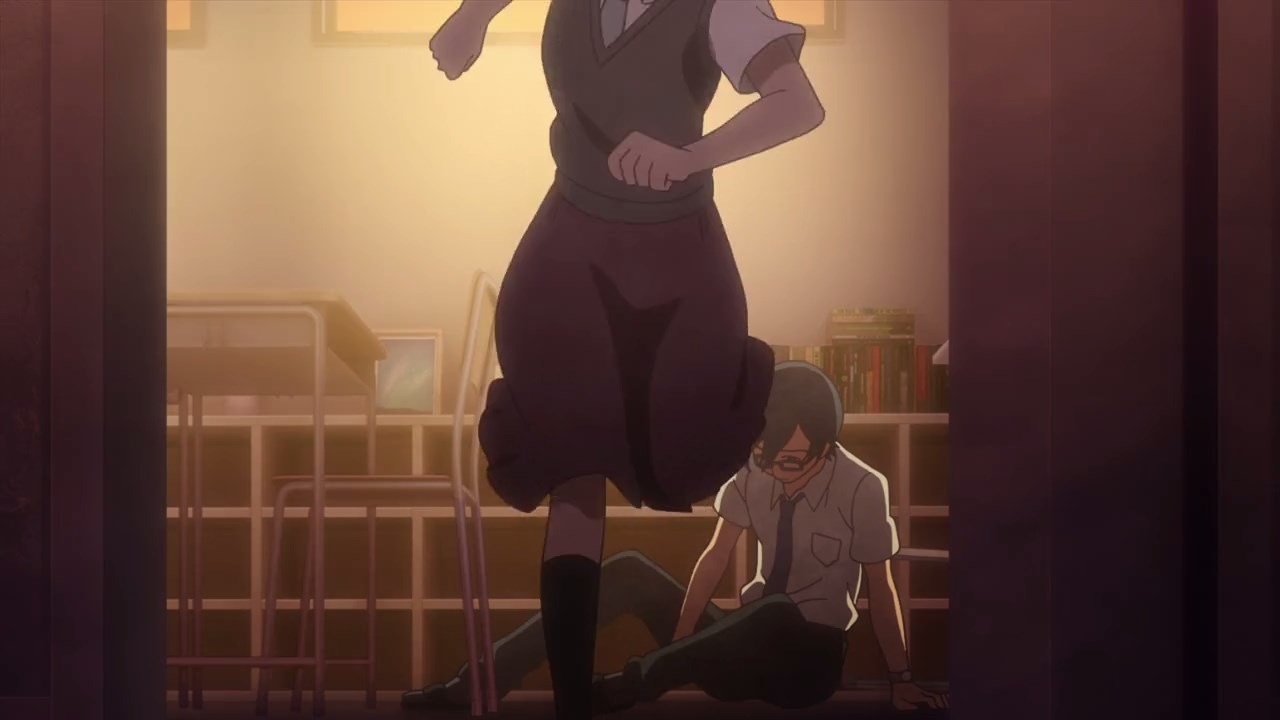 But as for Hitoha, she realized that she made an embarrassing stunt towards Yamagishi-sensei and left the room.

Come to think of it, I wonder if Hitoha Hongou is sexually-attracted towards Tomoaki Yamagishi? Wait a minute, that’s not good at all! 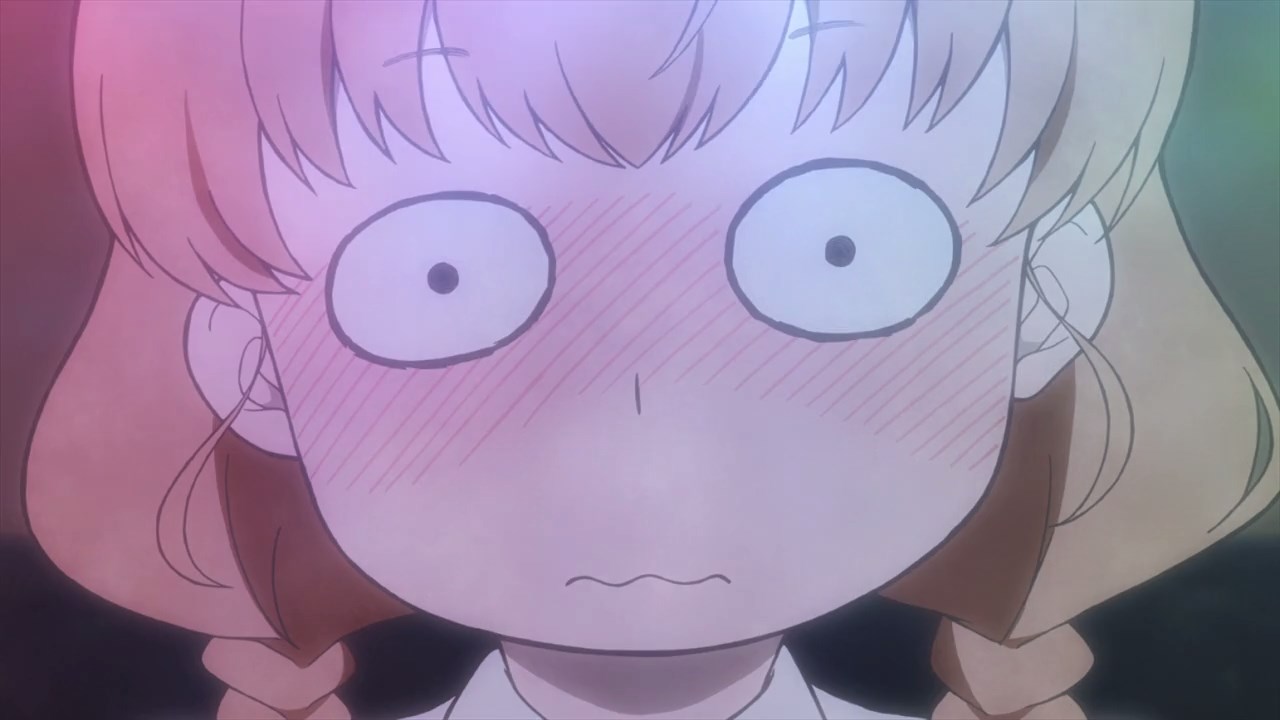 Now let’s go back to Momoko Sudou where she got invited by her cram school mates to a karaoke bar. 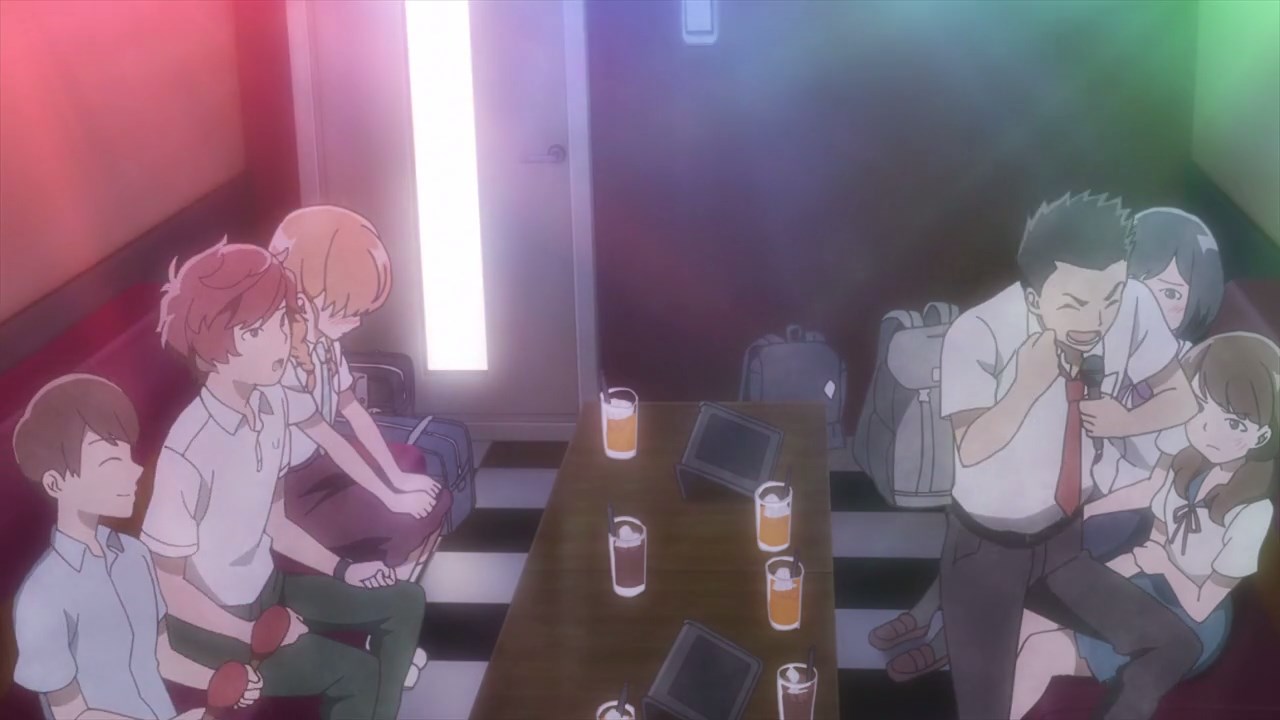 Unfortunately, she felt uncomfortable as there’s one guy who sings “fuck!” all the time. Yeah, Momoko is in a very awkward situation! 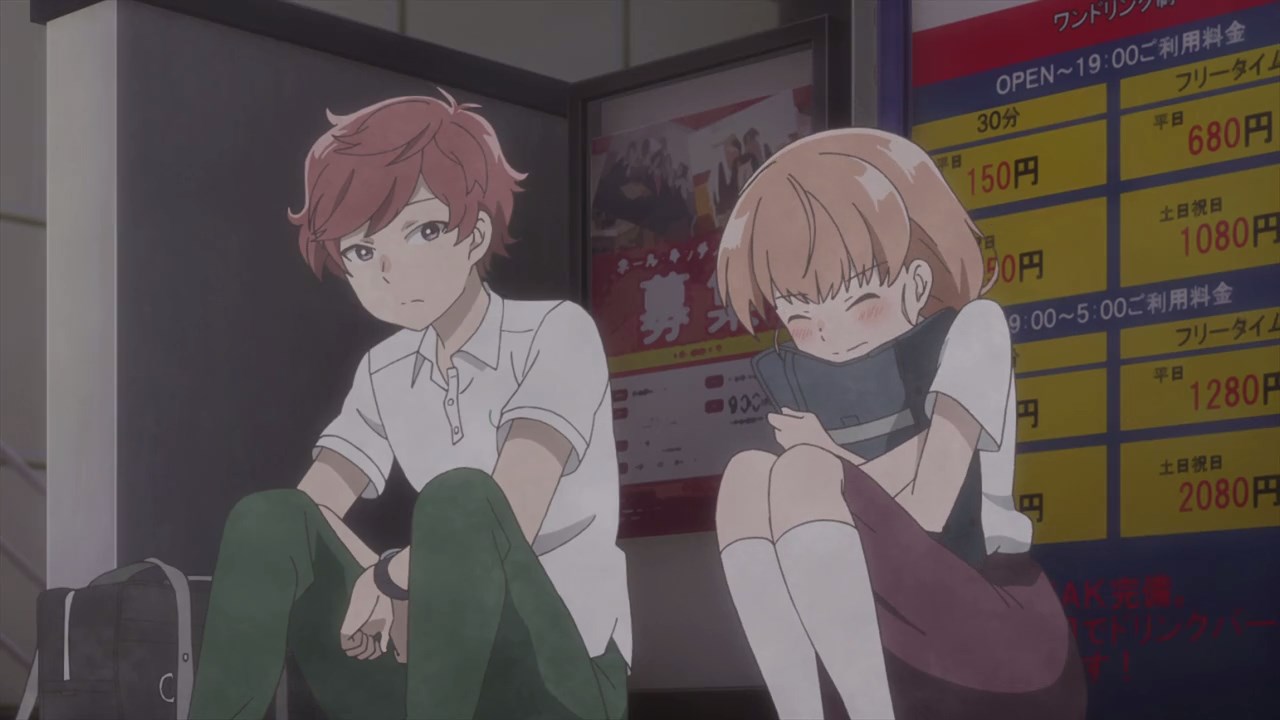 Good thing this guy named Satoshi Sugimoto took Momoko Sudou outside for some fresh air, but it feels awkward for Momoko as she sits beside a guy she just met.

Then again, turns out that Satoshi got attracted to Momoko when they’re in elementary school. Of course, Sudou doesn’t know much about Sugimoto since he transfers school most of the time. 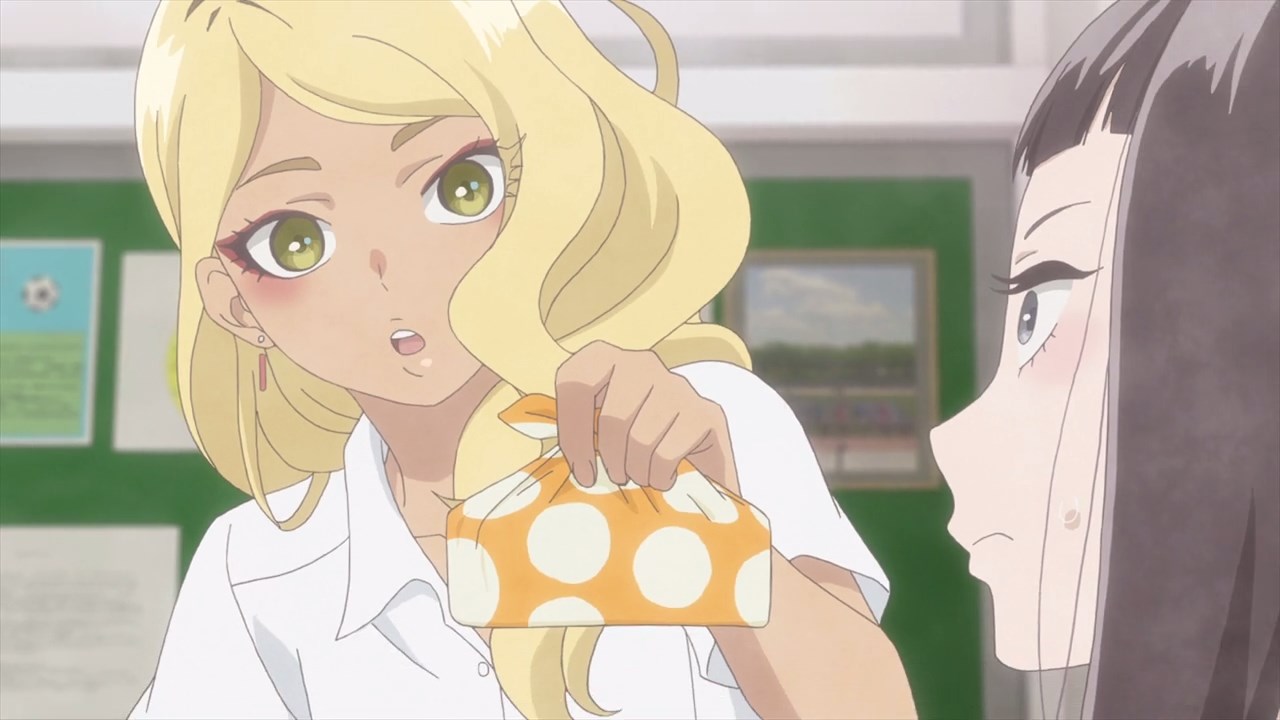 Moving back to Rika Sonezaki as she’s being approached by her classmates, including this gal named Sonoe Juujou over there who wants to share lunch with her.

Um, I don’t think Rika won’t share her lunch with Sonoe because c’mon, she badmouthed Sonezaki for being an ugly virgin. Really, I think there’s nothing wrong being a virgin as Rika Sonezaki is very cautious to herself. 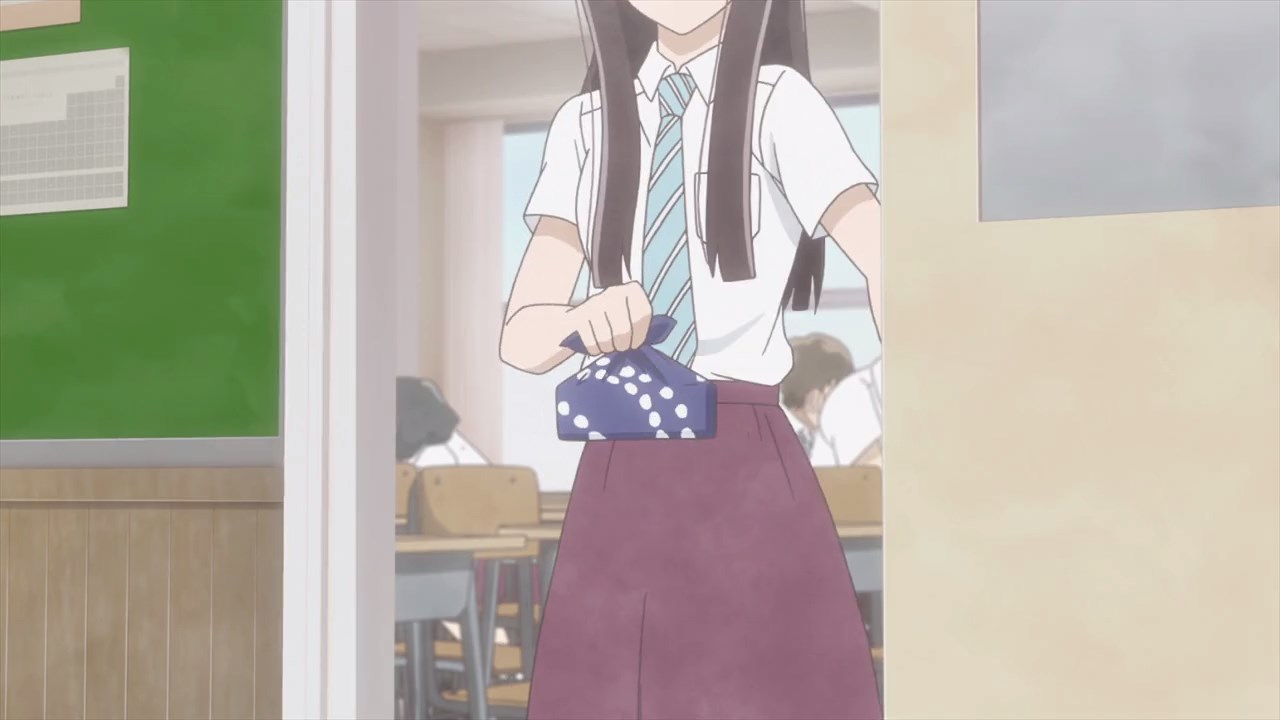 Anyways, looks like she’ll have to eat her lunch elsewhere because Rika doesn’t like her food being contaminated with perfume. 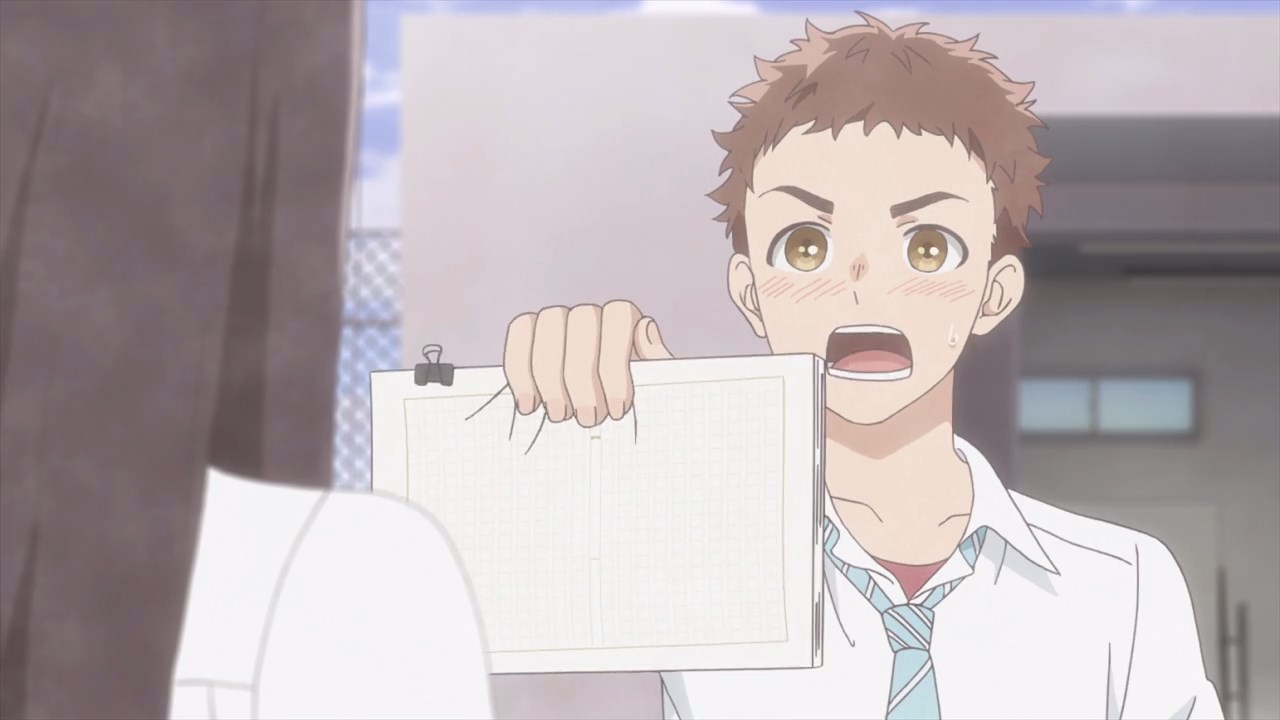 On the other hand, here’s Shun Amagiri as he finished writing his 50-page essay on what he feels towards Rika Sonezaki. I bet that he wrote the same thing many times because there’s no way Shun can write an elaborate essay. 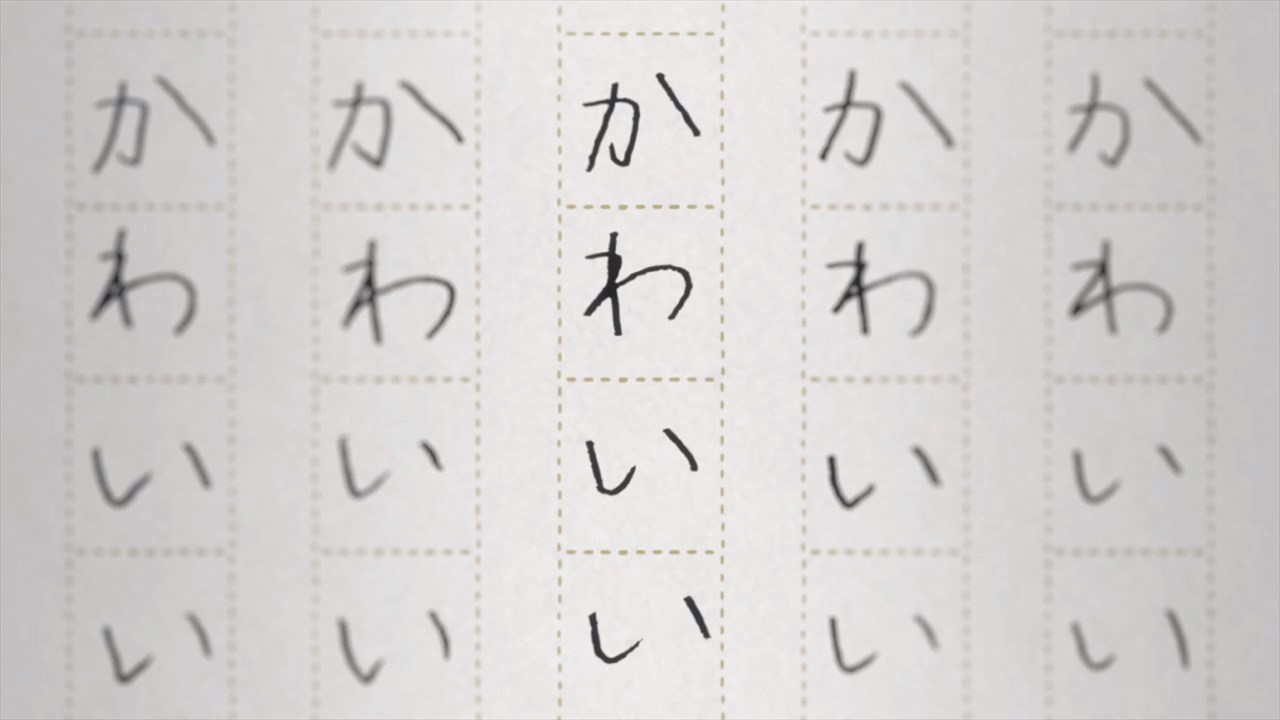 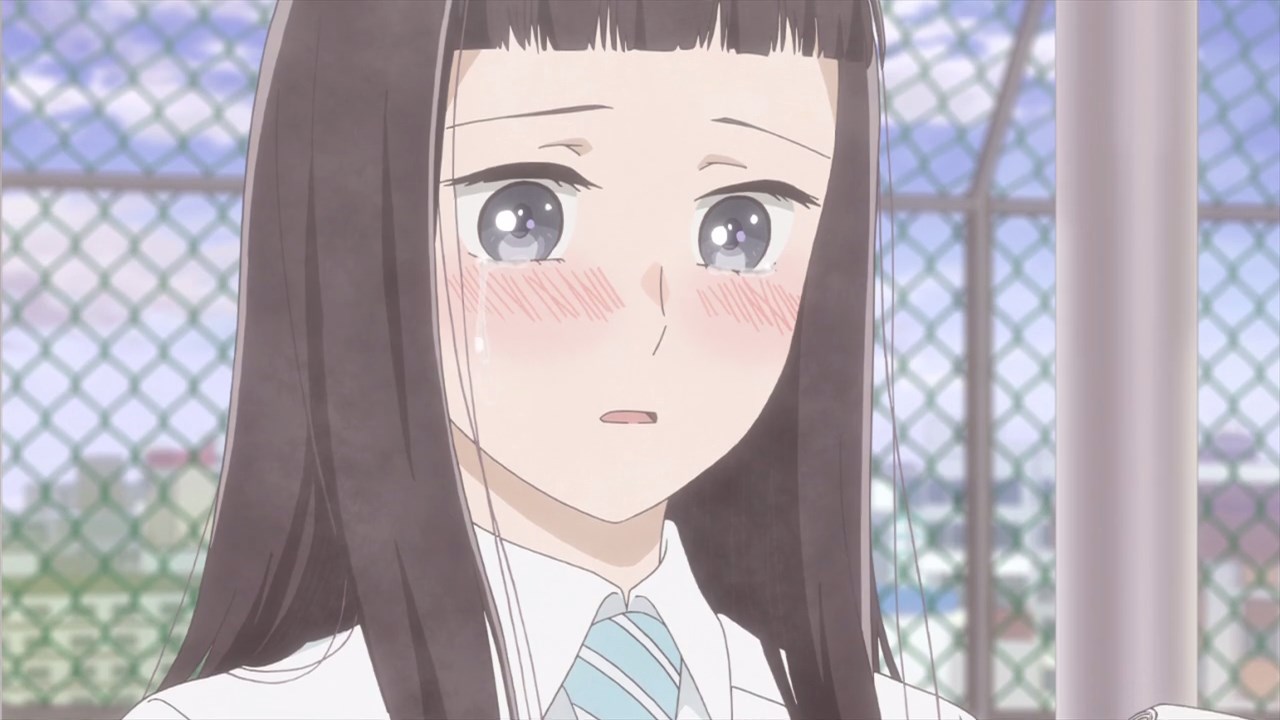 However, it seems that Amagiri’s essay made her cry as he wrote dozens of “Cute!” that filled the entire page.

Gotta say that Rika is starting to fall in love with Shun, but she has to be cautious because who knows what will Amagiri do to her. 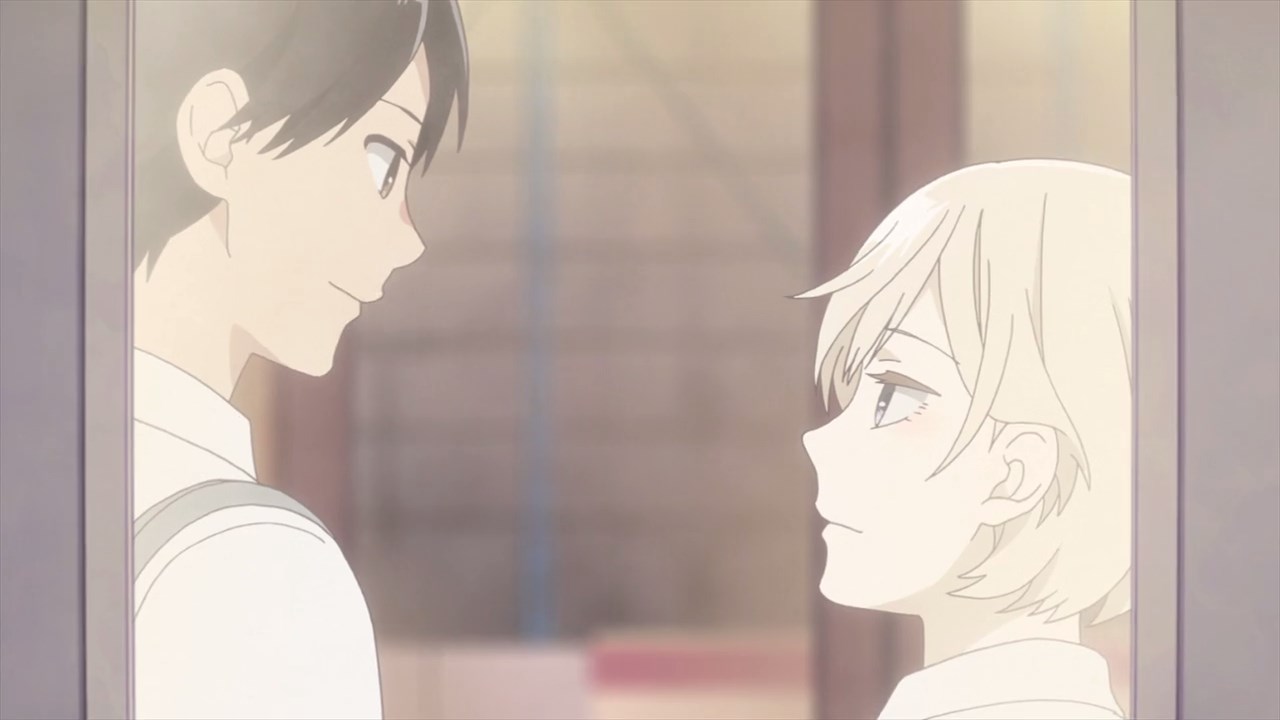 Now let’s end this episode where Izumi Norimoto is talking Niina Sugawara inside the train. Let’s hope that no one will saw them- 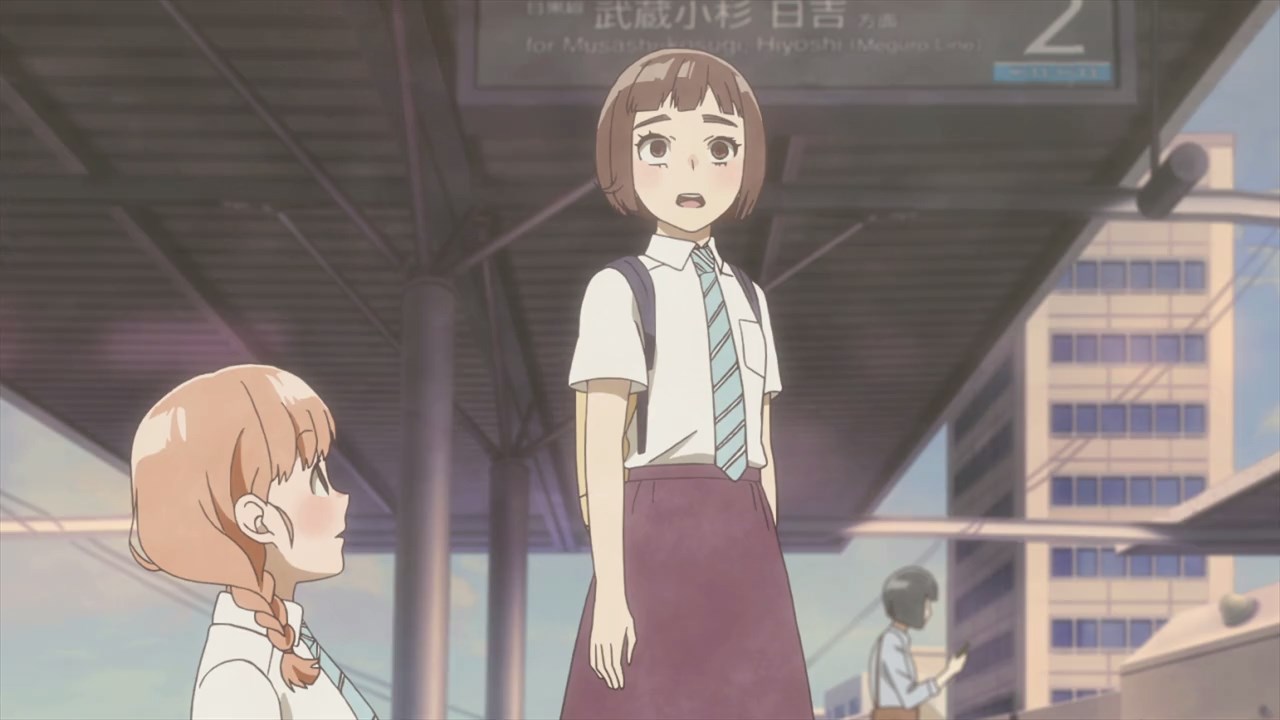 Oh wait, there’s Kazusa Onodera as she saw her childhood friend talking to one of her club-mates. Oh boy, I smell a love triangle coming up…

Anyways, I’ll see you next time and things are getting complicated for the members of the Literature Club!