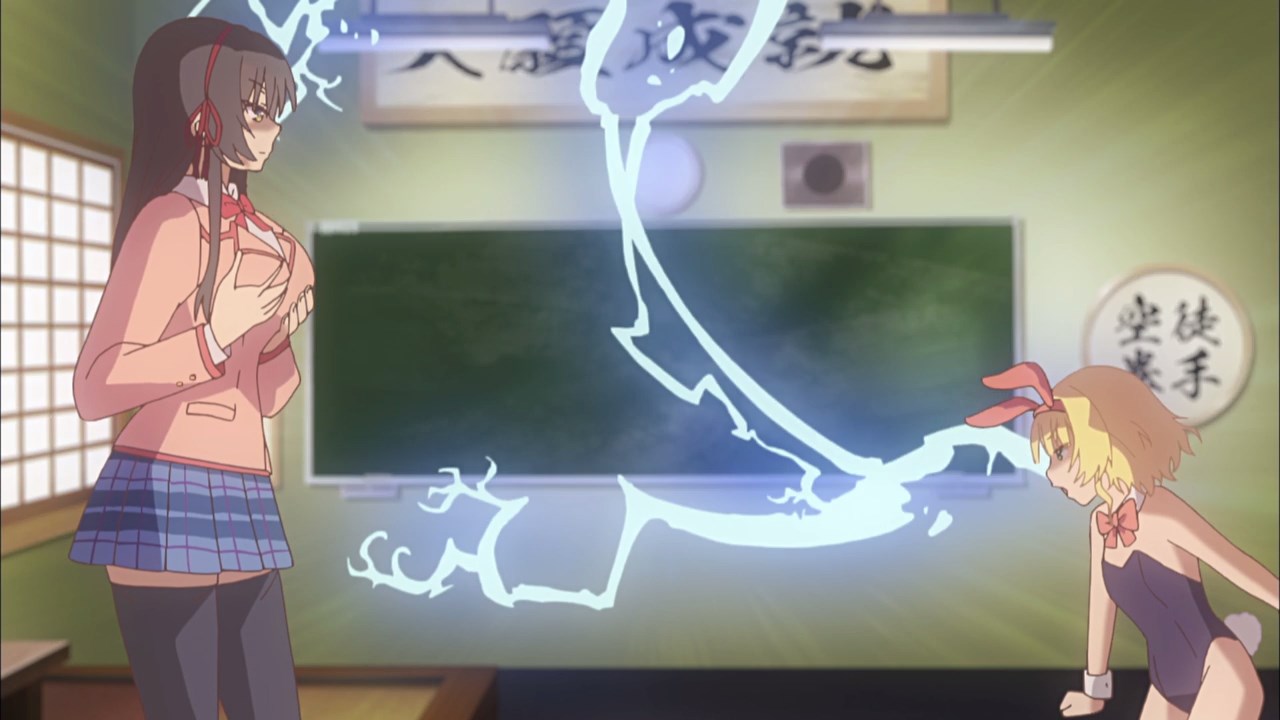 Well look what we have here, it’s Sayuki Tokihara and Yuika Koga where the former acts like an immovable object, while the latter is one pint-sized bunny girl-wearing unstoppable force.

Come to think of it, I feel that the calligraphy club is a place where it gathers some of the closet perverts around this high school. 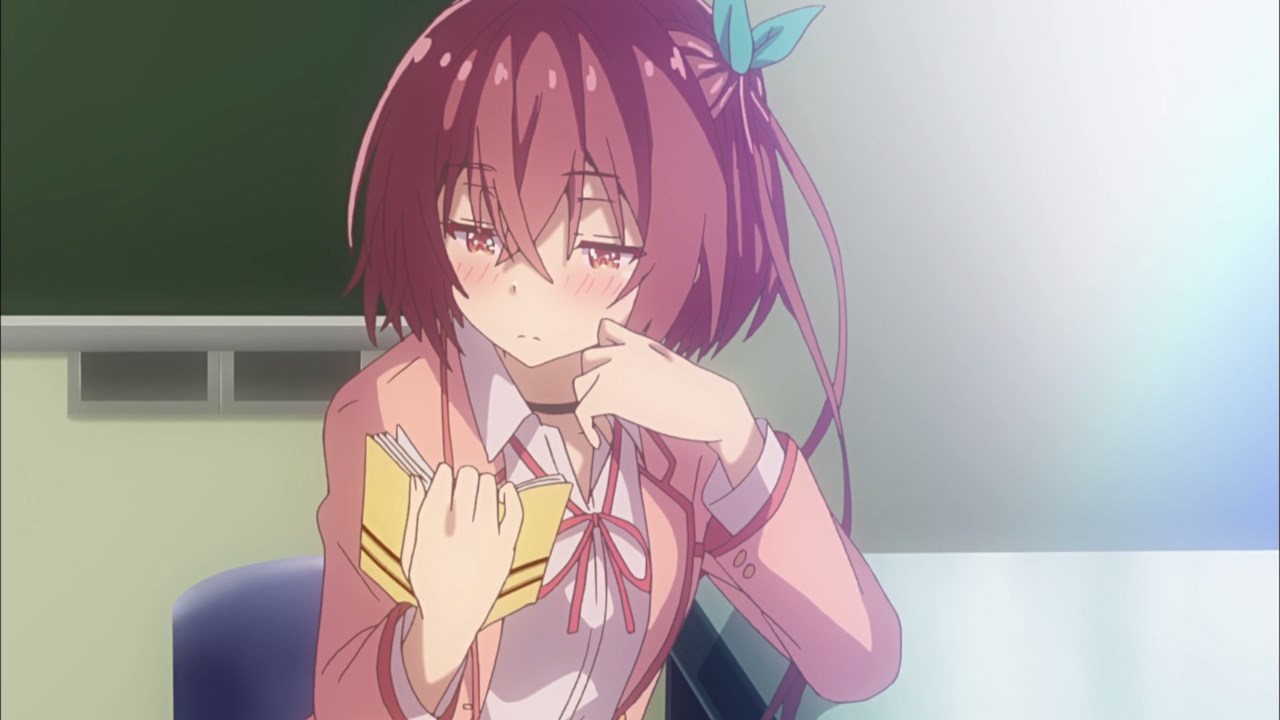 Also, here’s Mao Nanjou where Sayuki-sempai invited her to the calligraphy club because of her special hobbies, like writing yaoi doujinshi under the name Mao Minami. 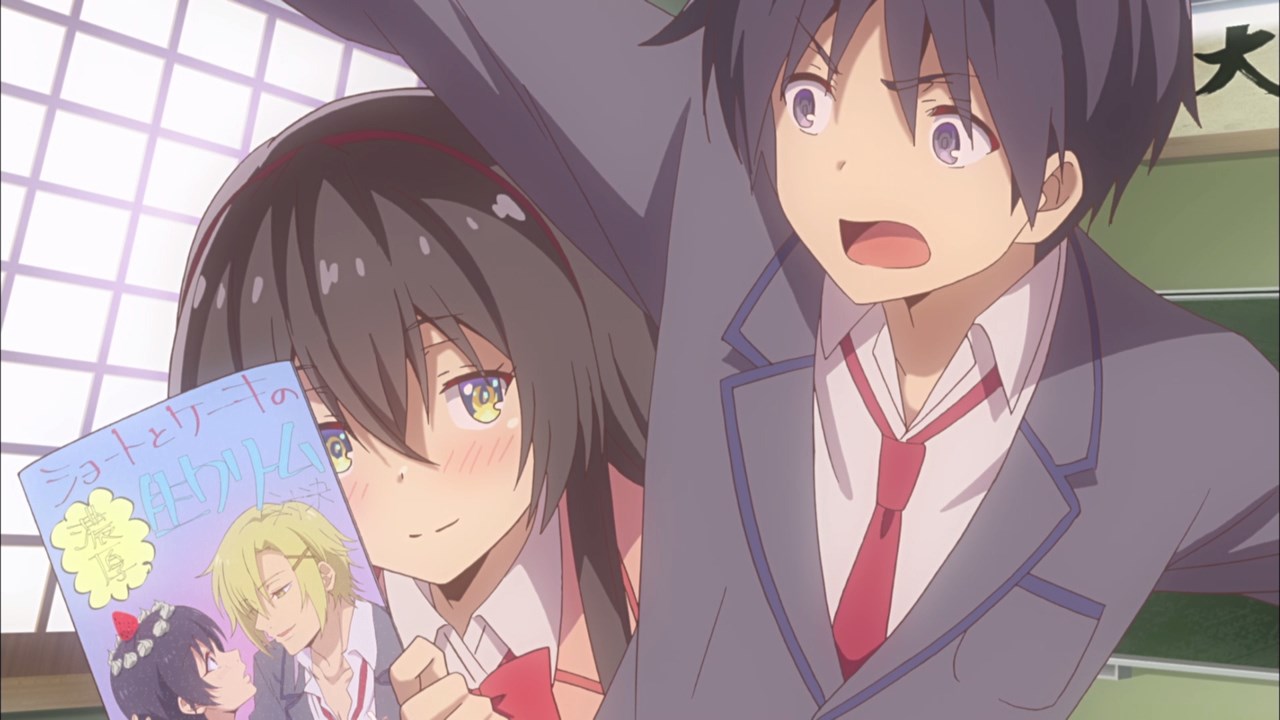 Speaking of Nanjou’s doujinshi, Tokihara has a copy of her latest work in which Kiryu was alarmed by it. Let’s hope that she won’t give that cursed doujinshi to Koga. 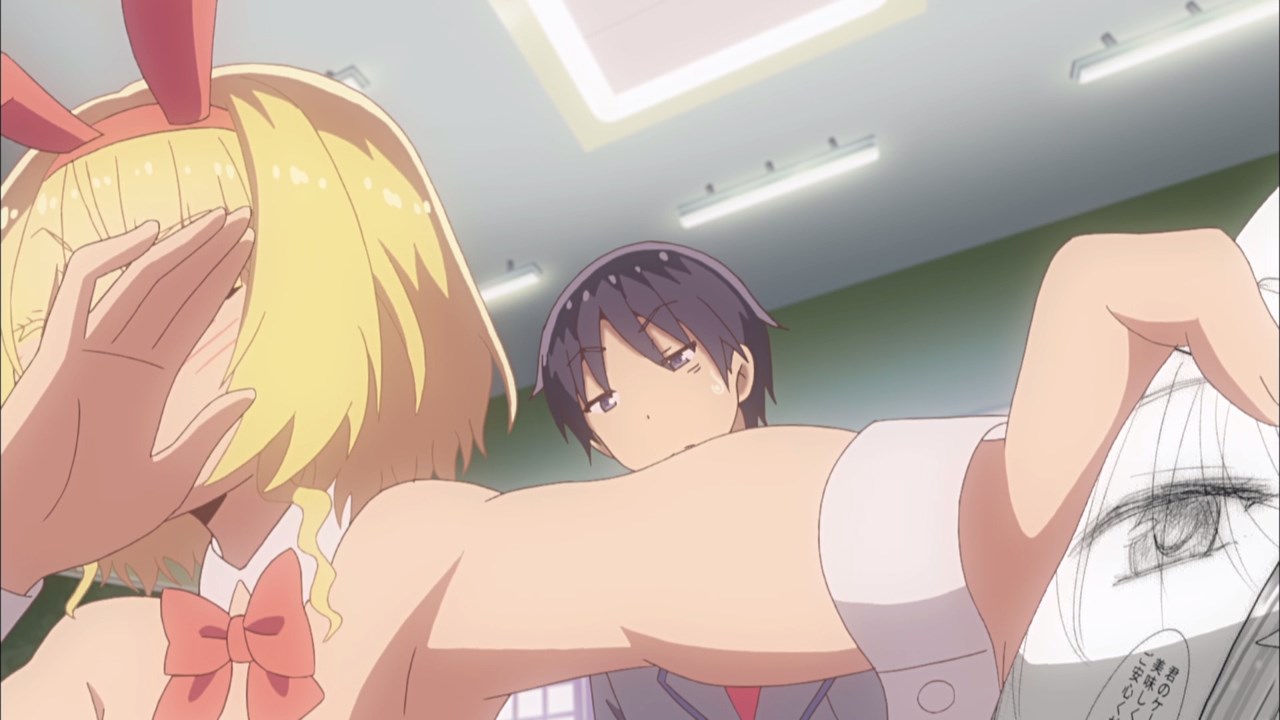 Ah nevermind, seems that Yuika got hooked upon reading it. Even Keiki is horrified!

Oh by the way, what about the time Keiki Kiryu got a compromising picture from the previous episode. Who send it anyway? 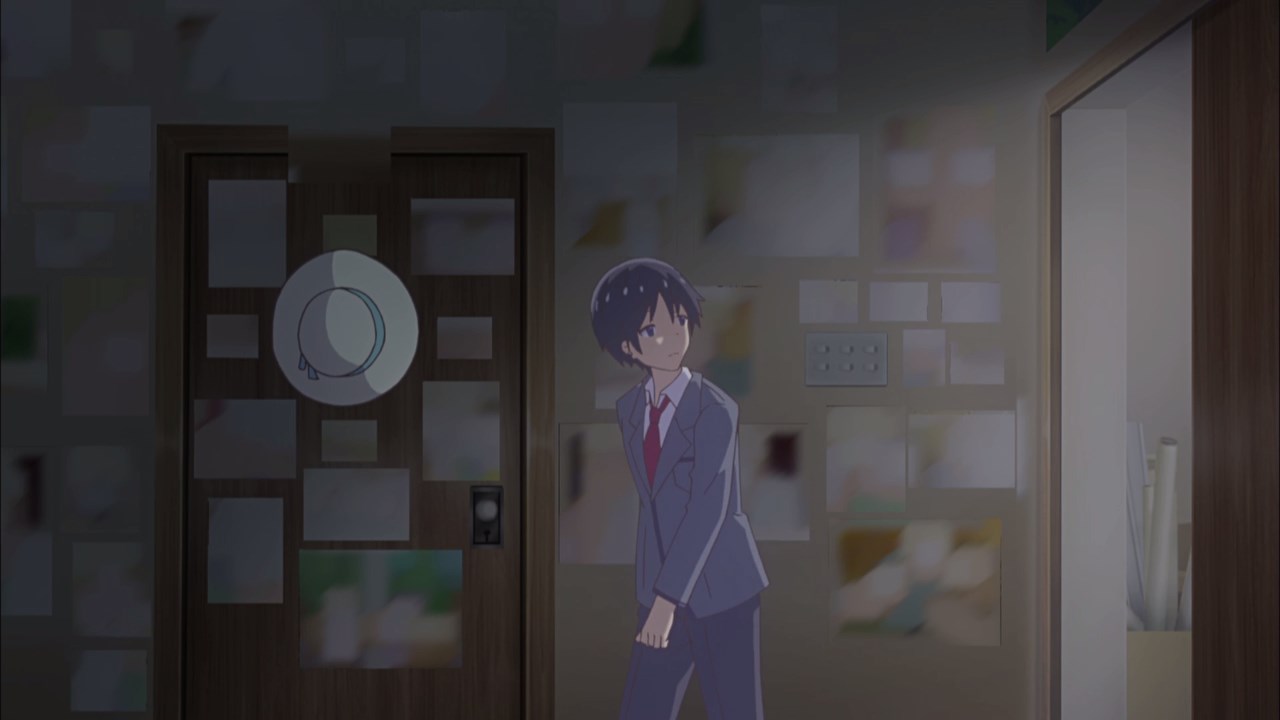 Well then, let’s find out as Keiki went to the astronomy club to find out the perpetrator. Then again, I believe that it’s actually a trap! 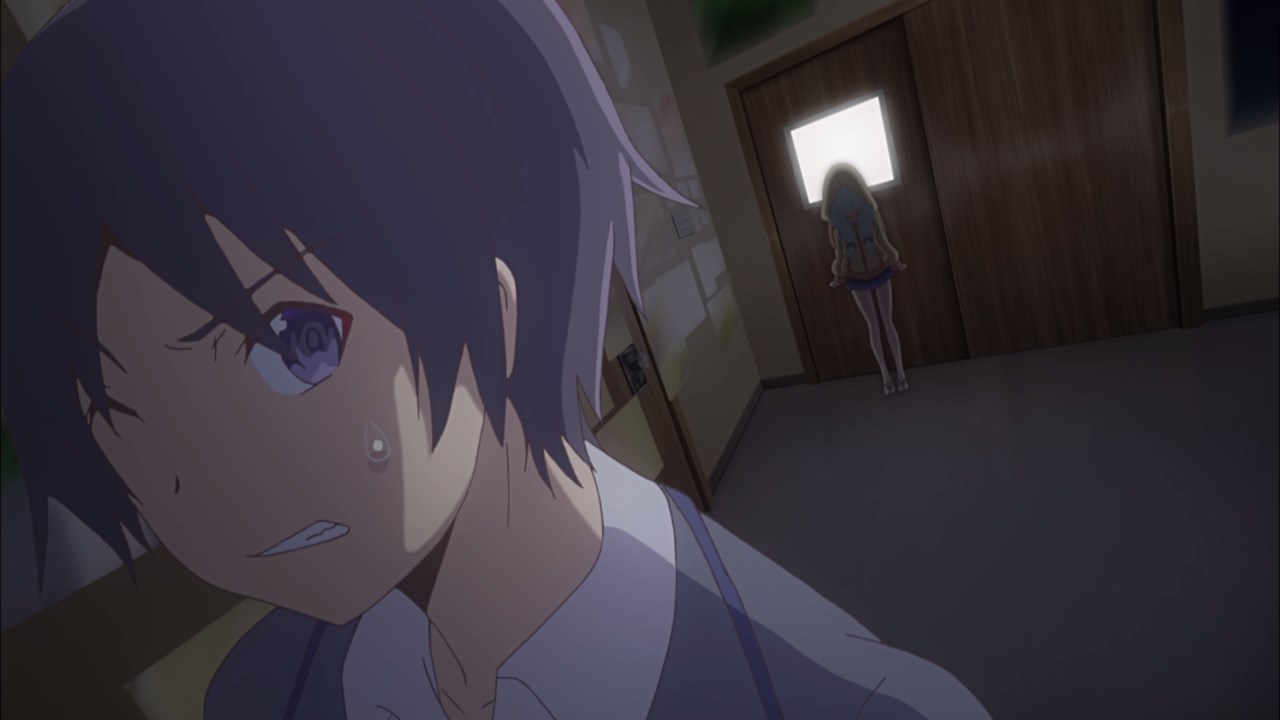 Yeah, I guess Keiki-kun fell right into someone’s trap as the perpetrator is revealed. Okay, who is this person who send that picture to Kiryu? 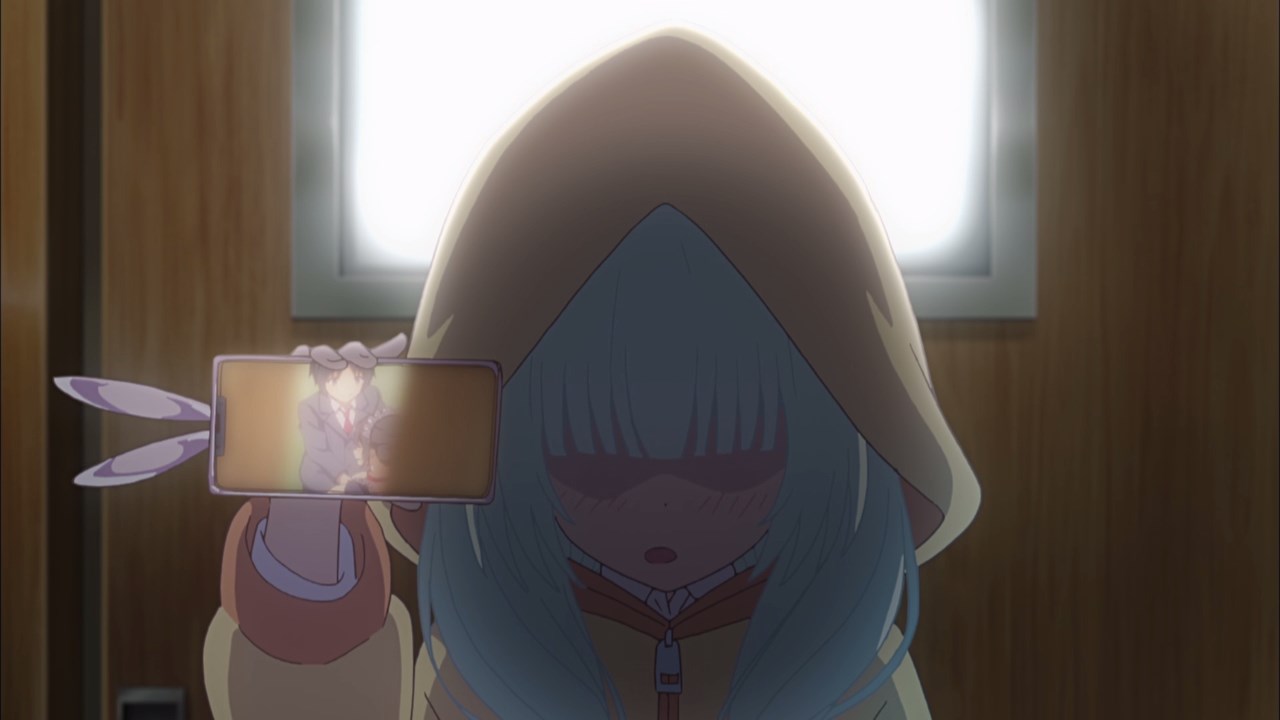 Anyways, this is Koharu Otori where she’s the only member of the astronomy club. Sure that she got that pic, but how did Koharu manage to take a picture of Keiki shoving his hands between Sayuki’s boobs? 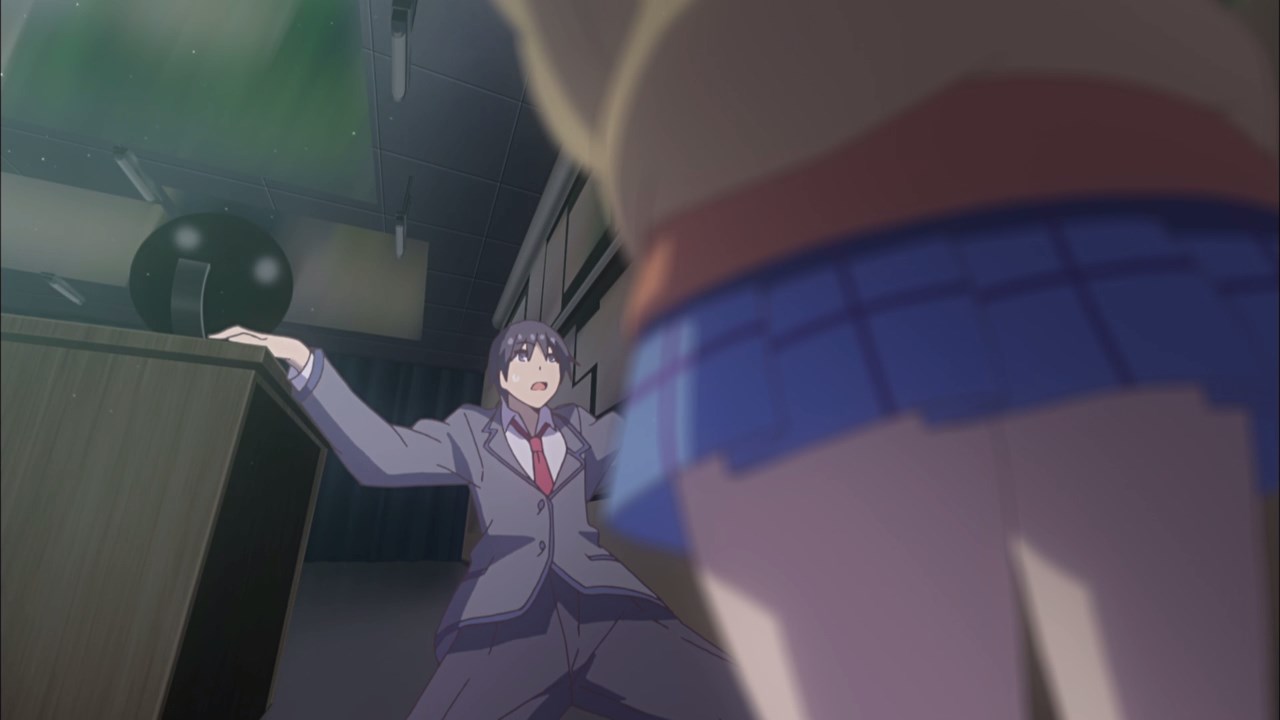 For Keiki Kiryu, he’s shocked that the perpetrator appeared with the compromising pic on hand. But more importantly, Keiki-kun will be in for more surprises. 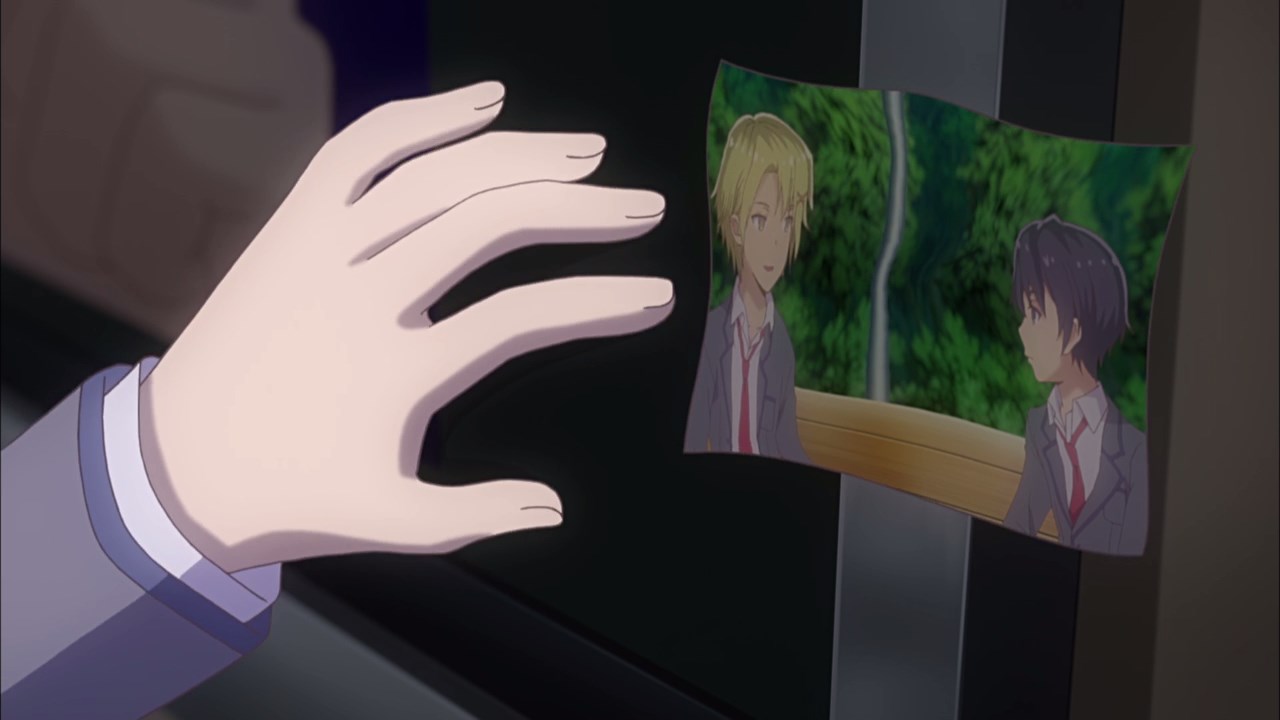 You see this picture over there? That’s Shoma Akiyama and Keiki Kiryu. Of course, that’s just the tip of the iceberg… 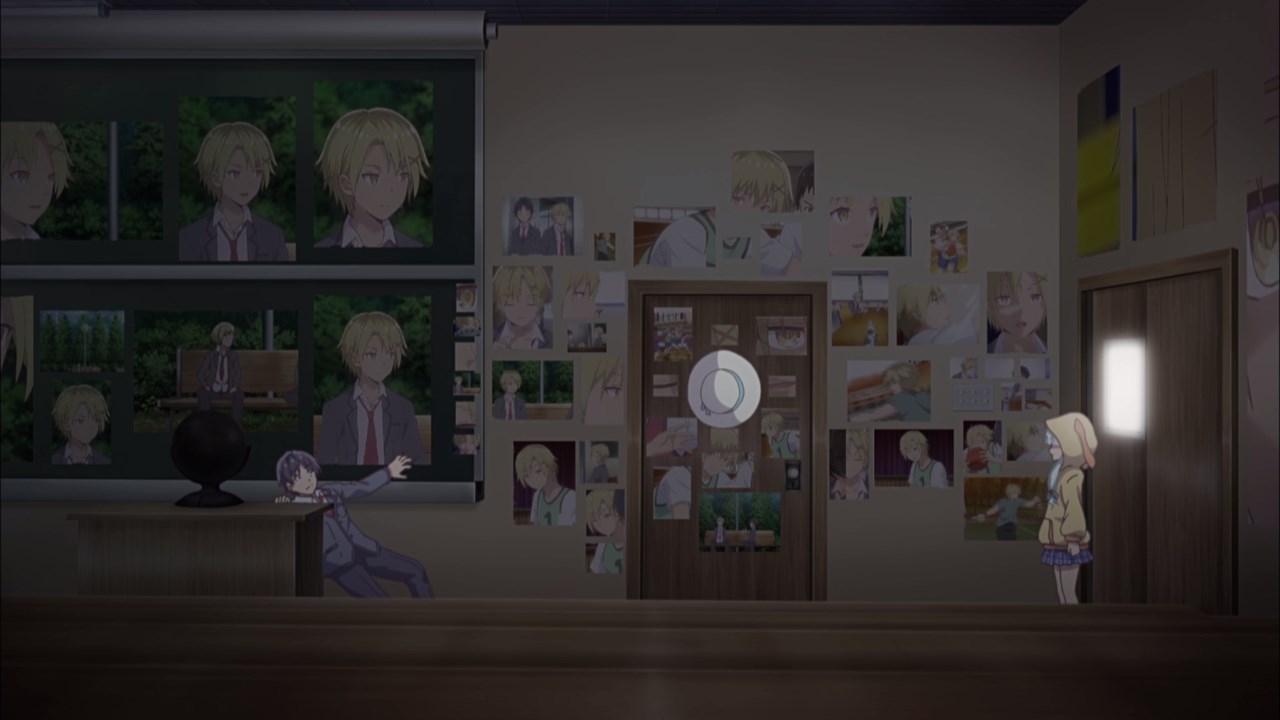 That’s because this astronomy club room is filled with pictures of Shoma Akiyama. Okay, what’s going on here?

It turns out that Koharu Otori has a crush on Shoma Akiyama and she wants Keiki Kiryu to tie them together as a cupid. Oh and if he didn’t comply with Koharu’s demands, she’ll release that pic to the public. Yeah, scary as hell! 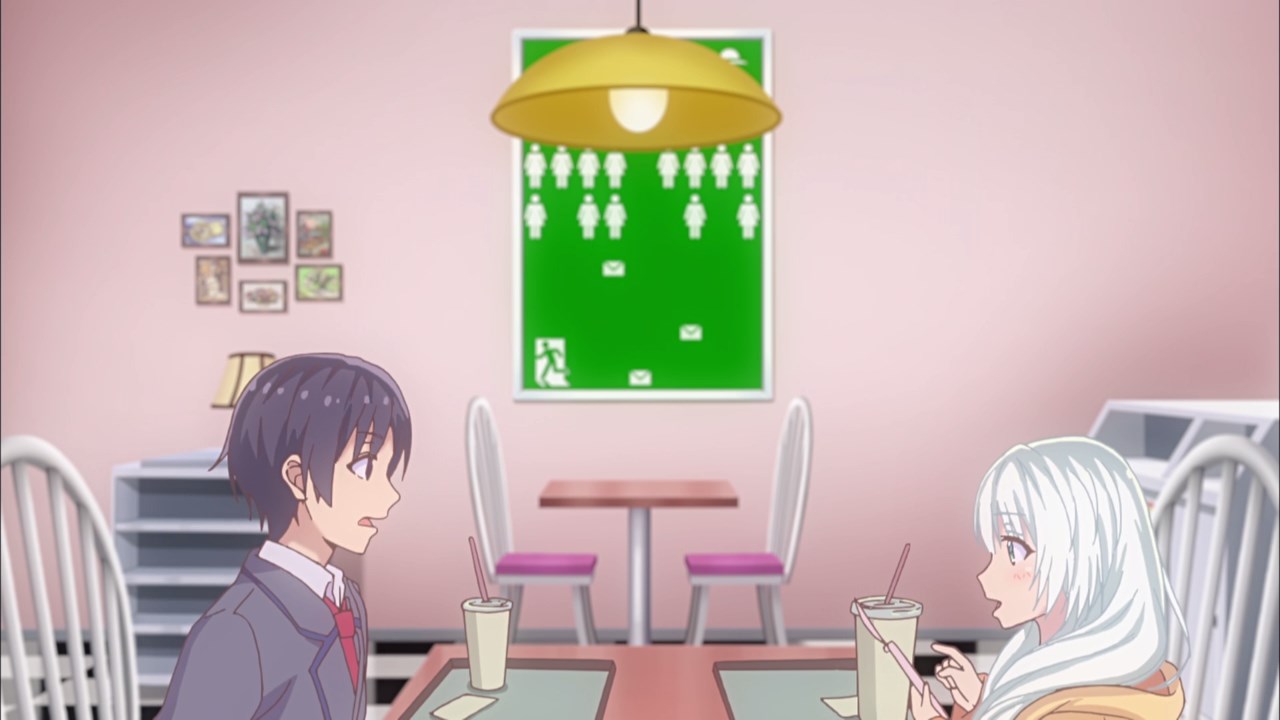 But the problem is that even though she looks like a little girl (which Shoma likes it), Koharu Otori is actually a 3rd year student. See that blue skirt she’s wearing? Koharu is a senior to Keiki-kun much like Sayuki-sempai.

That poses a problem ’cause Akiyama loves girls who are younger to him. It’ll be a shocker for him to learn Otori’s real age. Oh, and if Kiryu failed to hook them up, his reputation will be ruined once that compromising picture is released. 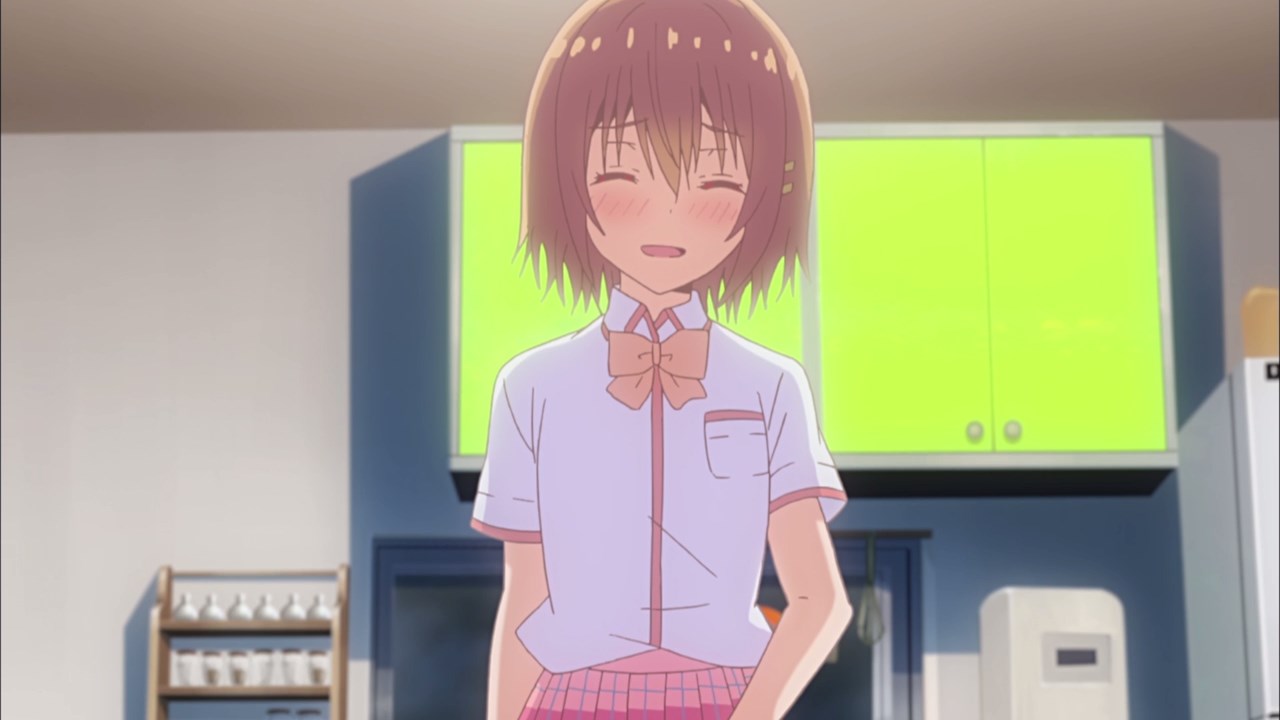 By the way, notice that girls are now wearing colored bowtie to denote which grade they are, all while wearing the same skirt as the rest regardless of whether she’s 1st or 3rd year. 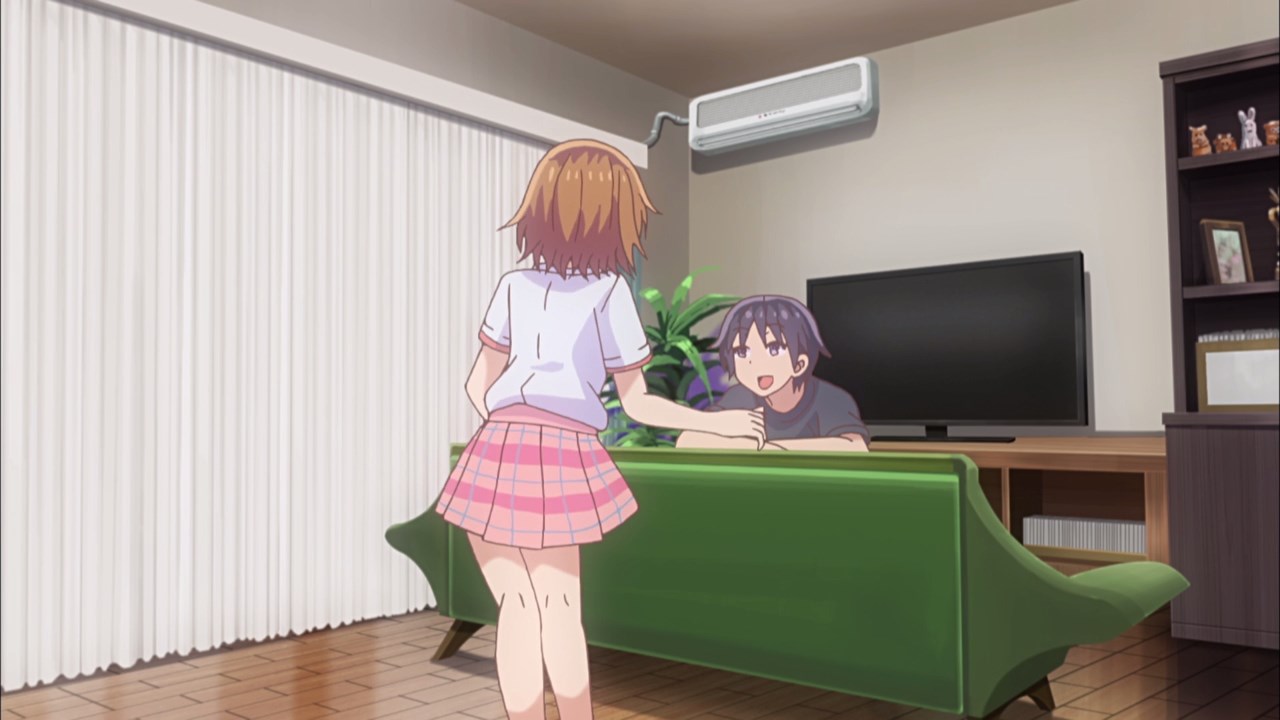 For Keiki Kiryu, that gave him a great idea on saving himself from being ruined thanks to a sleazy picture. You may thank Mizuha for helping him, even though she doesn’t appear much.

But wait, how will Keiki hide Koharu-sempai’s blue-colored bowtie? I mean, it’s weird to have a loli being older than the rest. 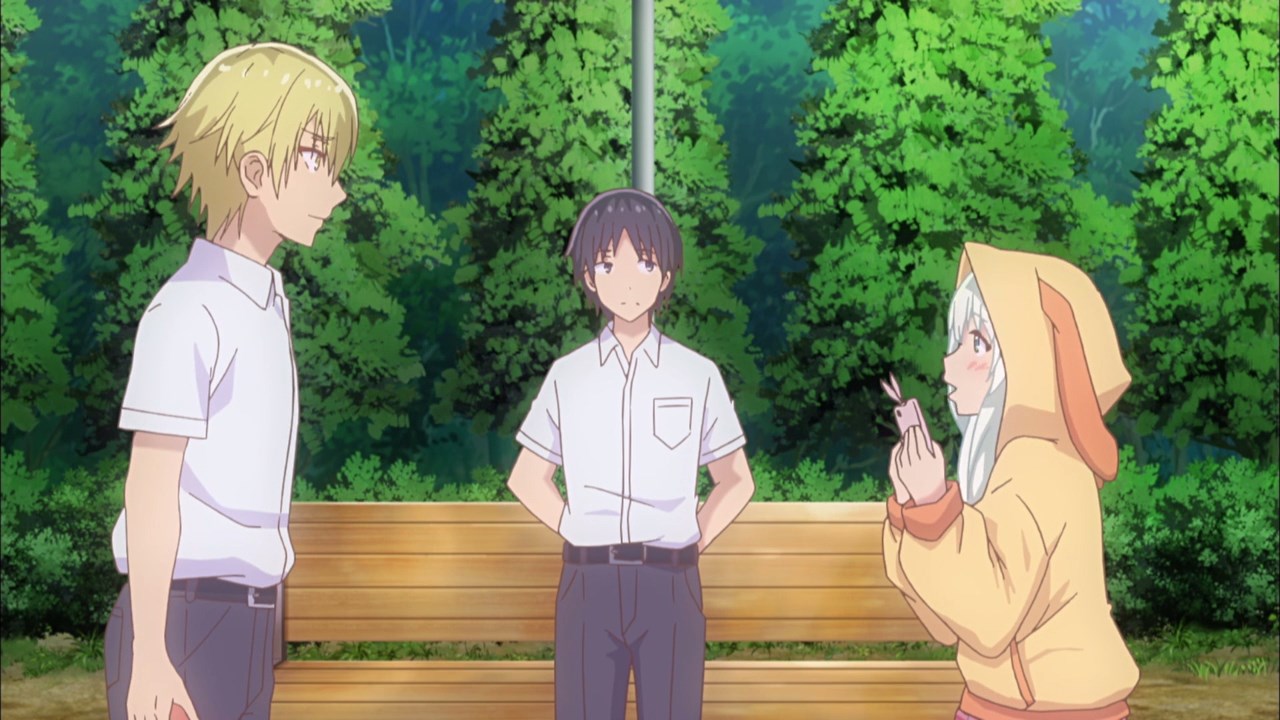 Simple, Keiki told Koharu-sempai to wear a parka to hide her bowtie. But hey, it works as Otori managed to meet up with Shoma Akiyama and exchange contact numbers.

Glad that Koharu got her wish but at this point, we’ll never know who’s the Cinderella who left her panties at the calligraphy club. 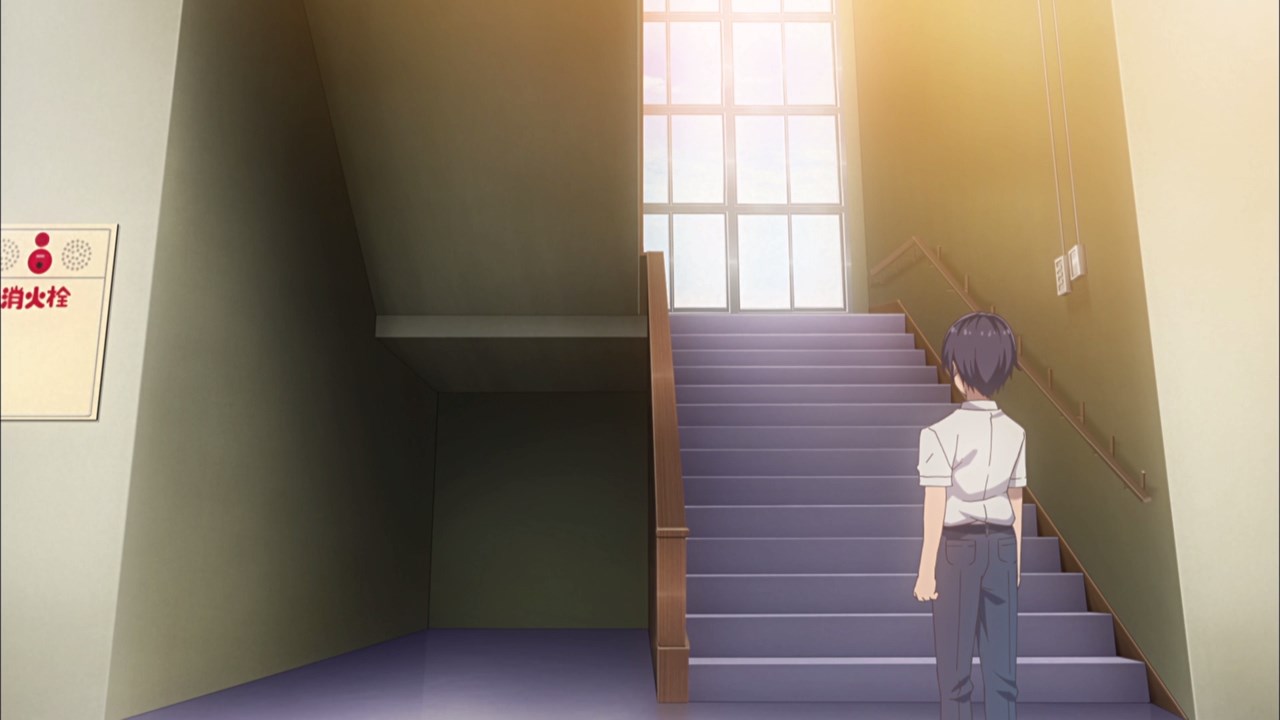 However, I think Keiki Kiryu will encounter some girl as he climbs the stairs. I mean, there should be someone up there. 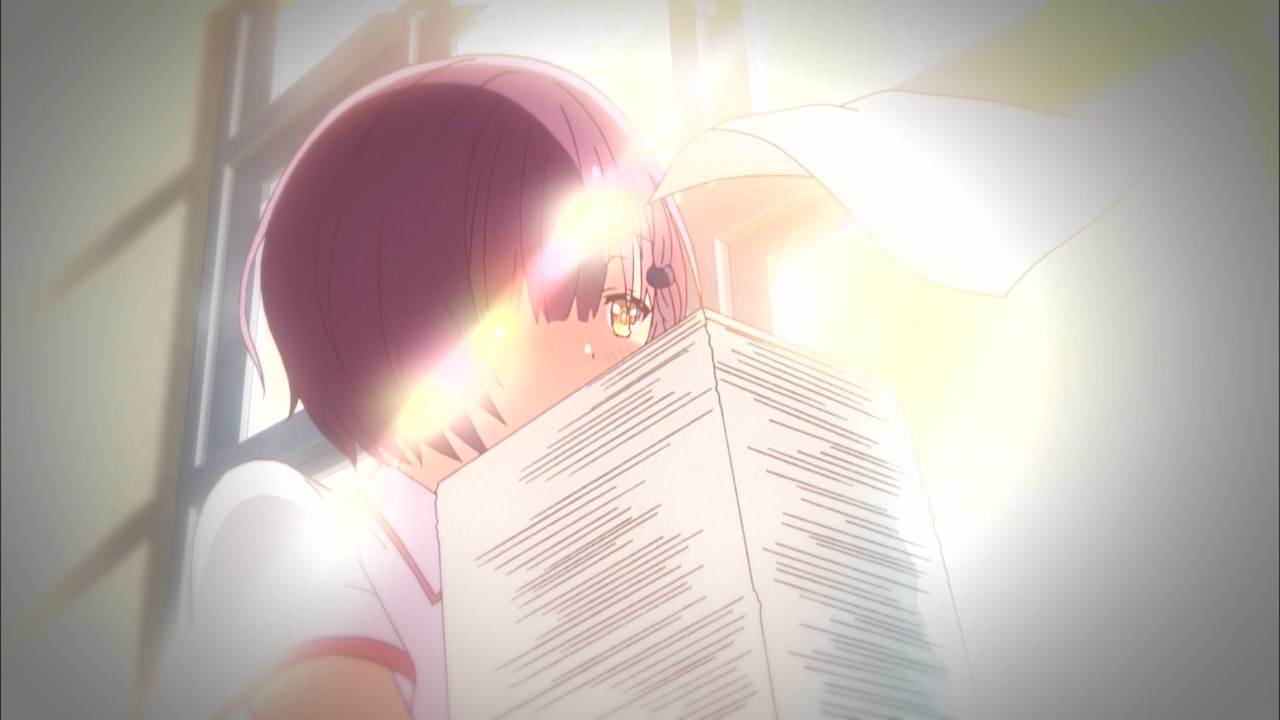 And what Keiki-kun saw upon climbing the stairs is none other than the student council vice-president, Ayano Fujimoto. 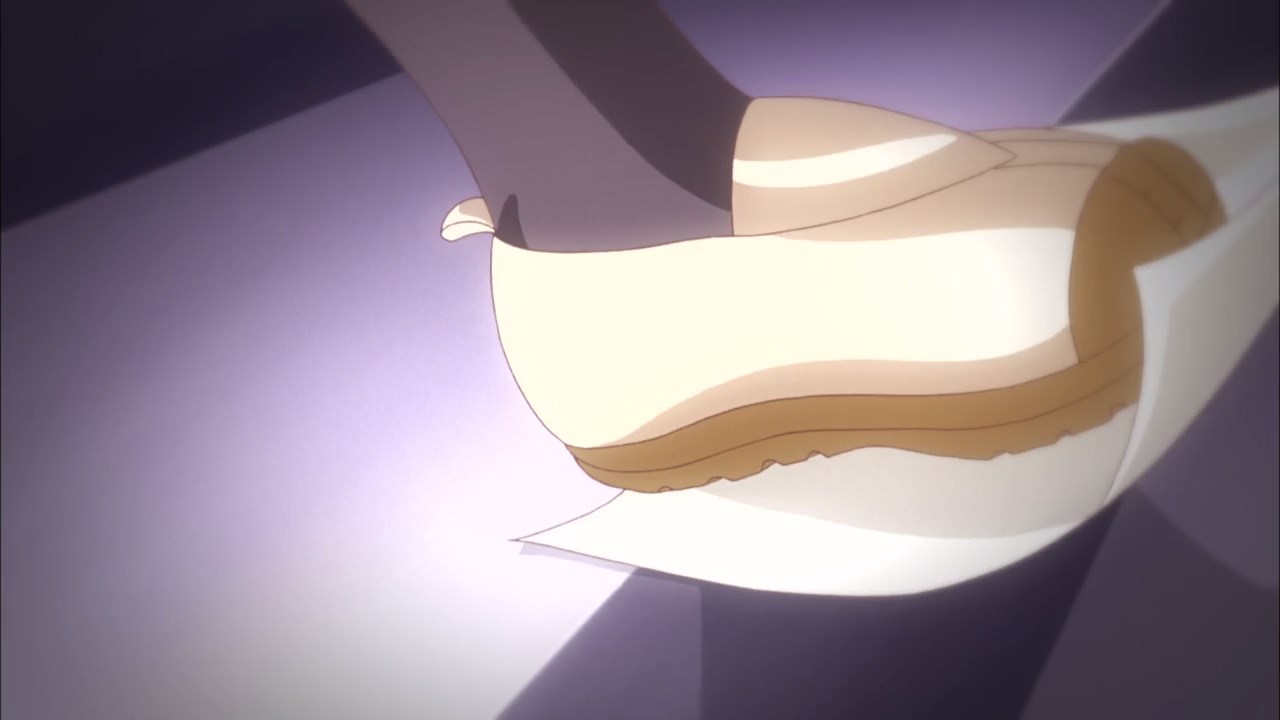 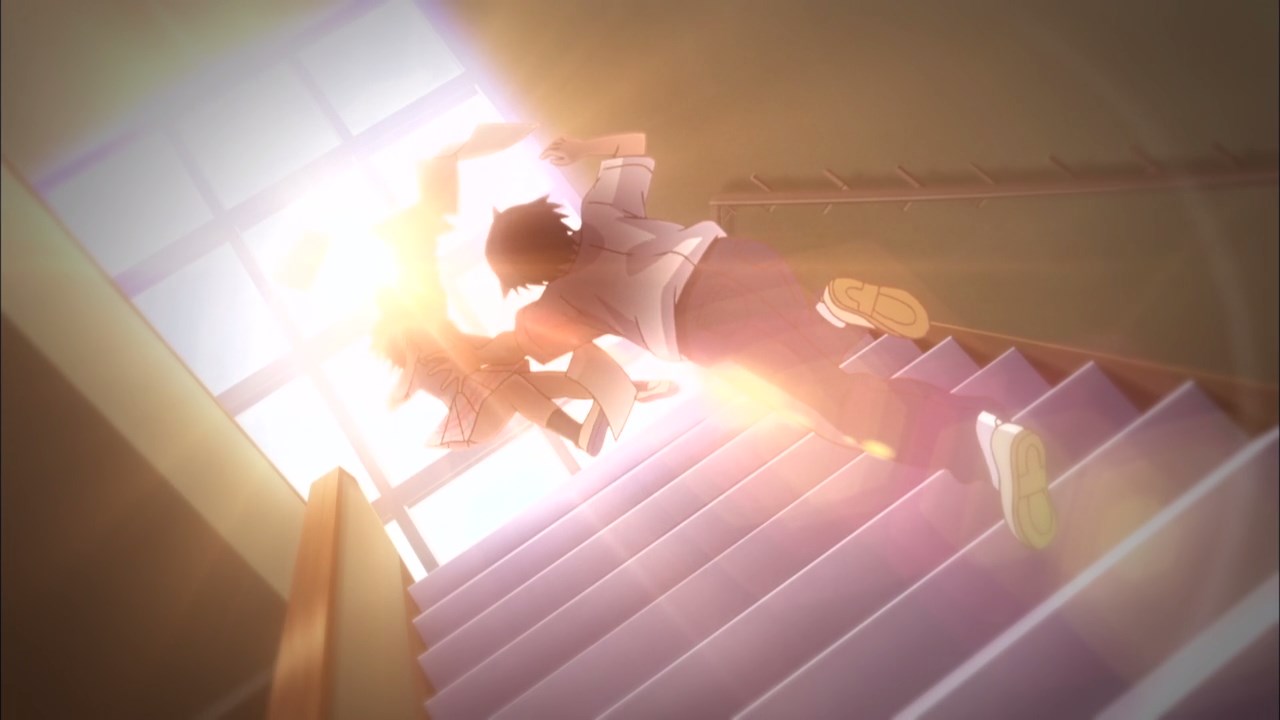 Unfortunately, Fujimoto step one of the papers that she’s holding and fell down to the stairs. Time for Kiryu to save her but will he make it? 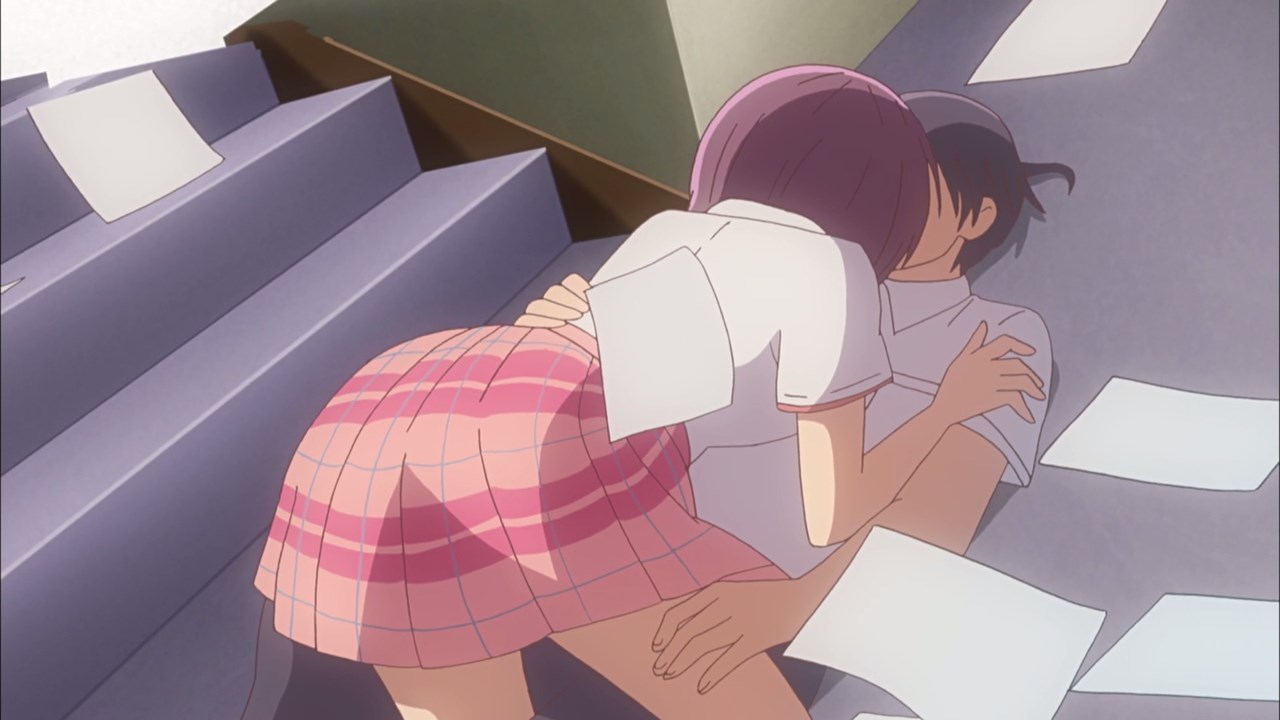 Well, he managed to save Ayano from falling to her death. But then again, the problem is that someone might see them like this. 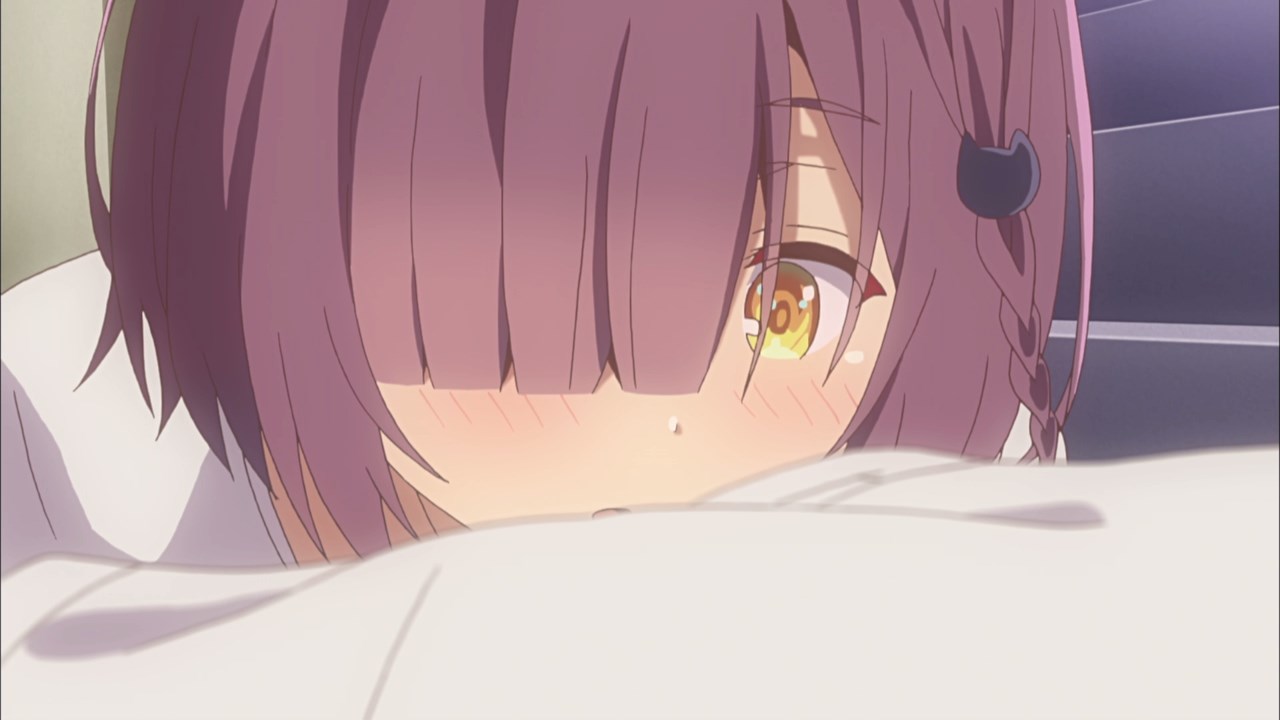 However, Ayano Fujimoto wants to stay with Keiki Kiryu a bit longer. Come to think of it, I wonder if she’s the Cinderella who left her panties? 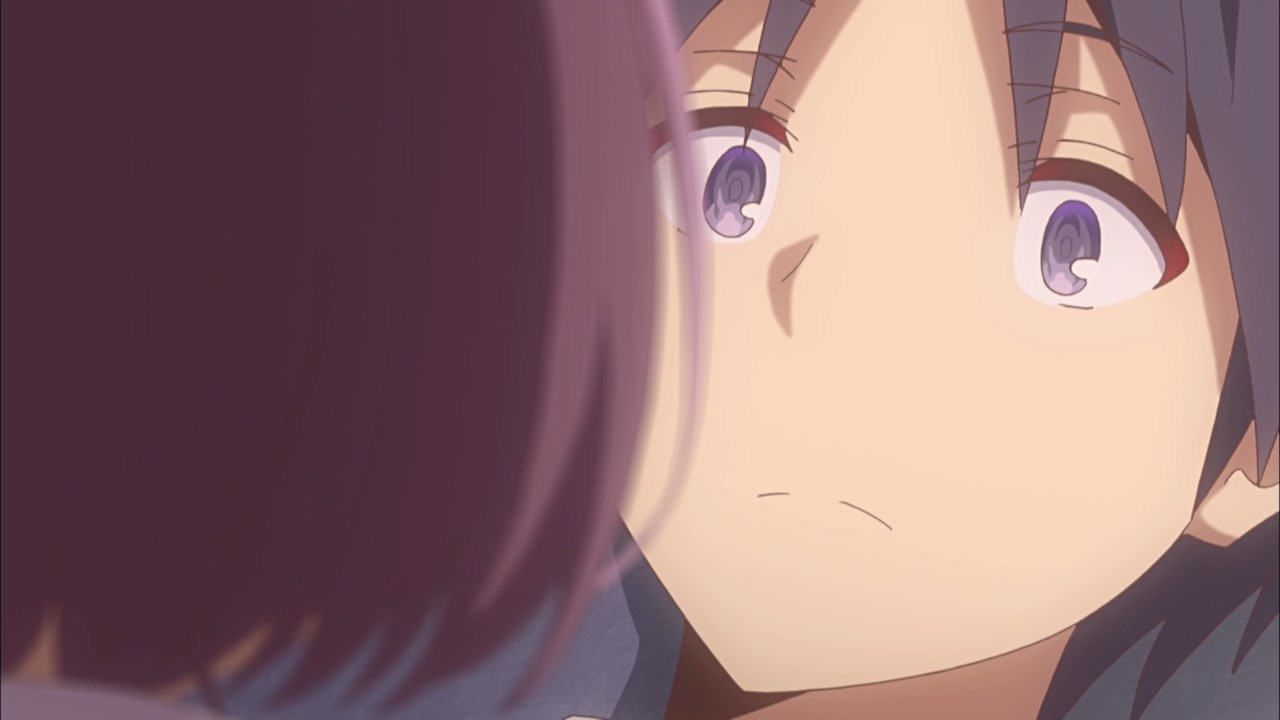 Anyways, looks like Keiki Kiryu will have to deal another girl on the next episode.

Will Ayano Fujimoto be one of the perverts or she’s actually the Cinderella that Keiki is looking for? Then again, we never know until we find out the truth for ourselves!