Hello everyone and welcome to Arifureta Shokugyou de Sekai Saikyou, an anime show co-produced by WHITE FOX and Asread but it’s mostly the latter who’s doing the heavy-lifting.

Anyways, this is the main character of the story named Hajime Nagumo, an otaku who transported to another world together with his classmates and he’s gonna fall down to his death. Man, Hajime got a bad day in another world! 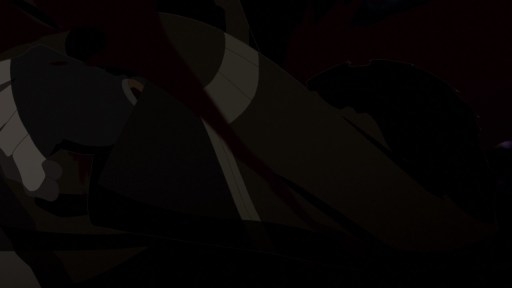 And it gets worse when Nagumo’s left arm got cut off. Man, I feel that he’s gonna die sooner or later at this point!

However, Hajime Nagumo is not a quitter as he managed to survive using his transmutation ability to dig his way in until he stumbled upon a God Crystal and a puddle of water.

Simple, he’s gonna eat it raw but it’s a bad idea for Nagumo as eating raw and tainted meat is dangerous. Yeah, he’s not only deranged but also an idiot. 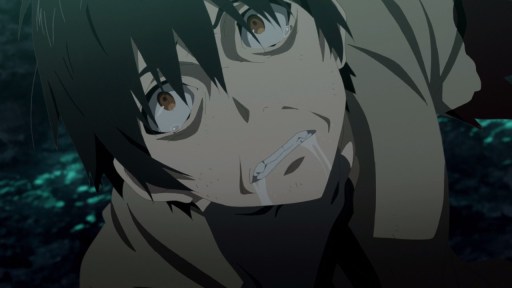 But to be fair though, Hajime Nagumo is getting desparate after being sent down to the abyss. Oh, and it’s not like he fell down like some accident as someone tries to kill him off.

I don’t know who orchestrated on killing Hajime but he’s pretty much pissed at everyone who betrayed him! Still, he’s gonna die anyway…

Just kidding, it appears that Hajime didn’t die from food poisoning as drinking water infused with God Crystals has not only the poison, but his body is starting to change upon eating wolf meat like changing his hair and possibly gaining abilities.

Eventually after eating lots of meat from other monsters, Hajime Nagumo emerged from his hiding as a different person from a meek otaku into a deranged monster, hell-bent on taking anyone down using his hand-crafted revolver.

Oh yeah and about that demon bear? Hajime ate its guts and took the fur to keep himself warm. Anyways, I guess it’s time for Nagumo to climb up the surface but he has other plans… 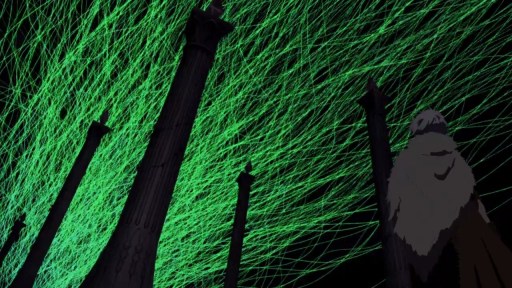 …like going deeper into the abyss as he’s not turning back at this point. Really, he doesn’t want to think about plotting his revenge as Hajime Nagumo wants to defeat some monsters and go home. 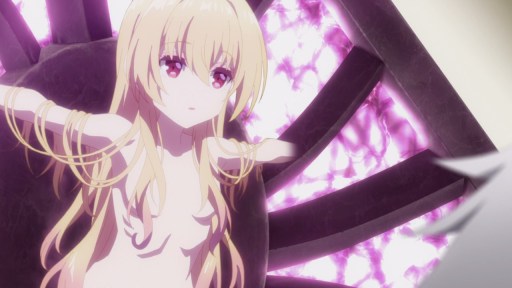 On the other hand, he stumbled upon a vampire who got stuck in this room for many years as she asked Hajime to set her free.

While Hajime Nagumo doesn’t want to deal with this vampire girl, she said to him that her fellow vampires betrayed her for some unknown reasons. Well then, seems that Hajime found someone who got the same predicament as him.

Well, seems that she loves having that name instead of being nameless all the time.

Of course, Hajime Nagumo will continue to go deeper into the abyss. With Yue at his side, they work together to take those monsters down along the way…

…until they reach the 100th floor where I bet that there will be a final boss inside this room. 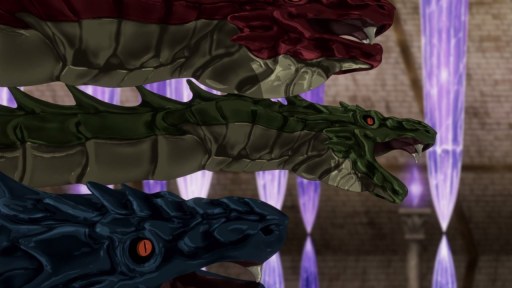 But then again, I have to say that this final boss looks awful, as if Asread fucked it up when it comes to CGI. God, it’s no wonder why this show is bad but it’s time for Hajime and Yue to take this CGI serpentine down!

But first, Hajime Nagumo will have to make his first kiss towards Yue as c’mon, this might be the last time he kissed a girl but I don’t want Hajime nor Yue to die at the last floor!

Anyways, both Yue and Hajime Nagumo combined their powers to defeat the final boss. C’mon, they can’t use their respective abilities to kill the boss on their own.

But as you can see, Yue’s vampire magic and Hajime’s magic-infused guns are a perfect combination that’ll deal a killing blow against this hydra-like monster.

Well, not quite because even though they took out the heads, there’s one more that they need to chop it off but this snake delivered one powerful beam straight at Yue. 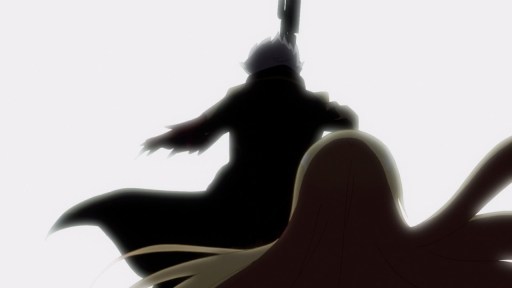 Not on Hajime Nagumo’s watch though as he used his body to protect Yue from being blasted away. Glad that Hajime managed to do one heroic deed towards a vampire girl.

Sadly, Hajime is about to die as the snake’s beam took out his right eye. Even though he ate some monsters along the way, Hajime Nagumo is nigh-invincible as he’s losing blood. 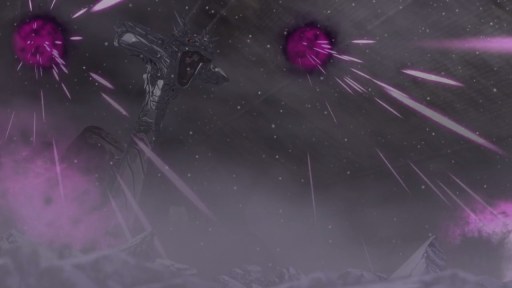 Oh yeah, and this boss won’t give them time to recover as it constantly attacks. Man, this boss is sure a pain in the ass for not only its ugly looks, but also it dishes out beams like there’s no tomorrow.

Fortunately, Hajime Nagumo recovered from his injuries as he saves Yue again from being blasted away. But you know what, I want this monstrosity killed already!

Don’t worry though as Nagumo has a solution by throwing grenades at the final boss. Yes, he created bombs from scratch in addition to his guns.

Of course, he’s not gonna throw grenades at the snake as Hajime will just crack the ceiling so that it’ll fall down towards the monster.

And once that monster is pinned down, it’s time for Yue to roast this serpentine with Azure Blaze!

C’mon, I want this CGI monster burn away until there’s nothing left because let’s be honest here, Asread sucks when it comes to everything that the come up with post-Mirai Nikki, ranging from shitty story-telling to CGI.

On the other hand, what about WHITE FOX? Do they have any input on this anime adaptation? Honestly, I feel that they went silent during the production.

So while Hajime Nagumo and Yue are resting after an intense battle against that serpentine boss, it’s time for another story.

Anyways, this feature Hajime’s classmates led by the designated hero named Kouki Amanogawa in which he defeats this behemoth who killed Nagumo, but actually didn’t because someone cast some fire magic at him.

But anyways, Kouki Amanogawa and his party are celebrating their victory against the behemoth but let’s be honest, that behemoth is nothing compared to what Hajime and his vampire partner encountered in the deepest parts of the abyss.

Also, here’s Kaori Shirasaki where even though her party avenged Hajime Nagumo’s death by killing the behemoth, she felt that something isn’t right.

Oh yeah, Kaori is joined by her best friend named Shizuku Yaegashi where she protects Shirasaki with her sword skills. While they’re celebrating their victory, little did they know that Hajime Nagumo is alive and really, those who conspired to kill him forgot to check his corpse. 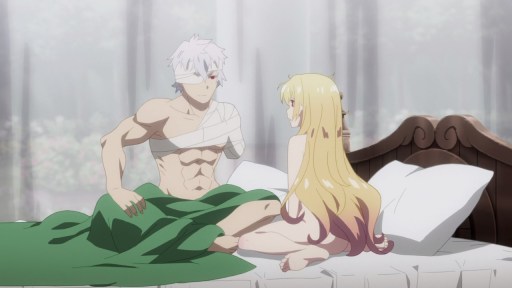 Speaking of Hajime Nagumo, he’s surprised that not only he’s sleeping in a comfy bed, but also naked along with Yue. But seriously, how did they stumble upon this place?

Well, after they defeat the final boss at the 100th floor, Yue took Hajime to a place called the Maverick’s Lair.

While it’s nice that they have a place to rest after a long and grueling battle, Hajime is not content on licking his wounds for longer periods as he wants to know something that will help him find a way to get home.

Fortunately, he and Yue stumbled upon a throne room where it houses the lord of the Maverick’s Lair. Sadly, this lord is already dead as only his skeleton remained.

But, Hajime found a holographic recording of the lord as he introduce himself as a Maverick named Oscar Orcus.

Anyways, he congratulates Hajime Nagumo for making into the Maverick’s Lair after defeating the serpentine boss from the 100th floor. For you see, Oscar Orcus created the labyrinth to test those who are worthy on receiving his power.

Oh yeah, and Oscar told Hajime to use his newly-received powers for the greater good as it turns out that he and Yue will be fighitng evil gods who used humanity as playthings.

But you know what, he doesn’t give a shit about saving humanity in this world as Hajime really wants to go home. Anyways, Hajime Nagumo learned creation magic from Oscar Orcus which will be useful in addition to his transmuting abilities. 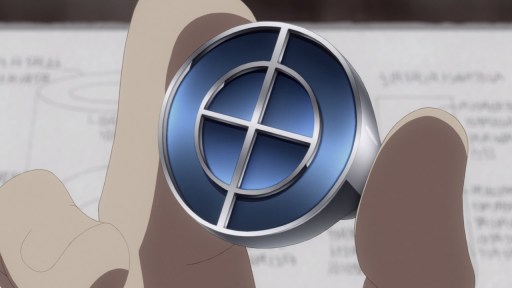 Also, he found Oscar’s ring in which it serves as a key to his secret room. Of course, Hajime needs to give Oscar Orcus a proper burial first.

Anyways, Hajime used Oscar’s ring to open this secret room, which turned out to be a workshop, complete with various books and tools to aid him.

For Hajime Nagumo, it seems that he wants to stay at the Maverick’s Lair for much longer as he wants to become stronger and better-equipped to conquer other labyrinths. Oh, and he won’t forget about Yue as he’ll give her some nice equipment to defend herself from various monsters.

Speaking of Yue, seems that she wants to jump right into Hajime’s pants as he’s bathing at the hot springs.

I don’t know whether Hajime Nagumo resisted her advances or not, I must say that Yue is one feisty vampire who wants to have sex with a man who rescued her… which she actually did it. 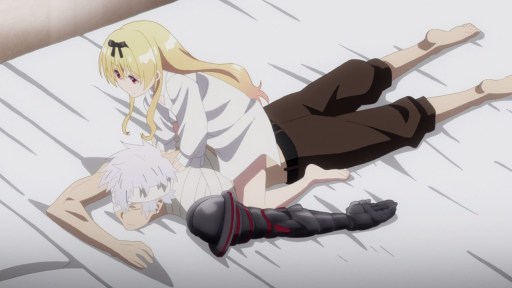 And now, it’s time for a montage where Hajime Nagumo prepares for conquering another labyrinth. Not only he crafted a mechanical left arm… 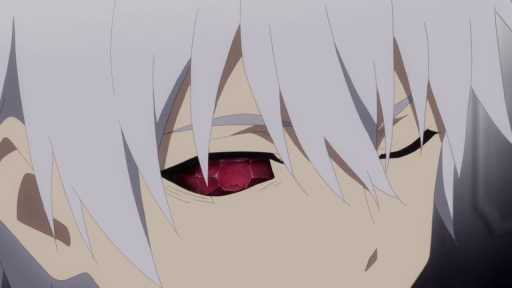 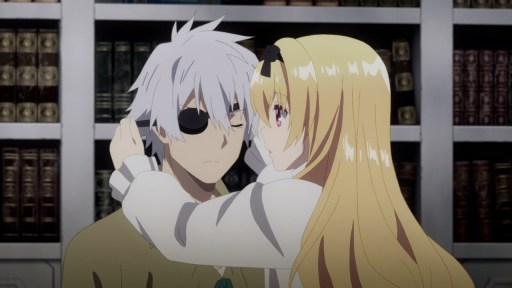 …but also created a demon eye to replace his lost one. Of course, Yue will have to cover it with an eyepatch because everyone will be terrified upon seeing Hajime’s right eye.

As for Yue, seems that she’ll receive a special gift from Nagumo in which he created a ring from a depleted God Crystal.

But you know what, I feel that Hajime Nagumo created a wedding ring just for Yue. I mean, they’ll be together through thick and thing so it’s fitting for Hajime to give something special to a vampire girl who will aid him on his quest. 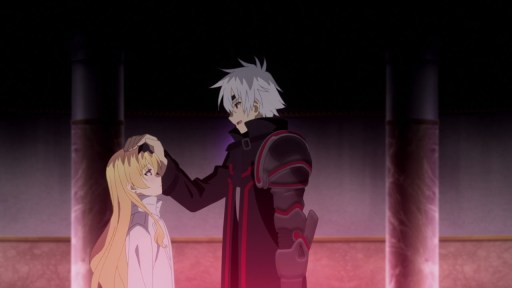 But anyways, that’s about it for the first 5 episodes of Arifureta Shokugyou de Sekai Saikyou as Hajime Nagumo and Yue are about to transport into the next labyrinth. Even though the premise is good and while I have to say that Hajime Nagumo’s transformation is impressive, I feel that it’s gonna be a freakin’ train wreck. Not just because of Asread potentially screwing it up, but there are reports that the author hated the anime adaptation.

Speaking of the author, Ryou Shirakome hated the initial draft of the anime that he fired most of the staff. Now I don’t know whether he likes the current staff that makes the anime adaptation or still bitches about it, all I can say that Arifureta is doomed. But you know what, I gonna watch it anyway for shits and giggles!

Now then, I’ll see you next time and if there’s something significant that happened in Arifureta, I’ll make a post about it.