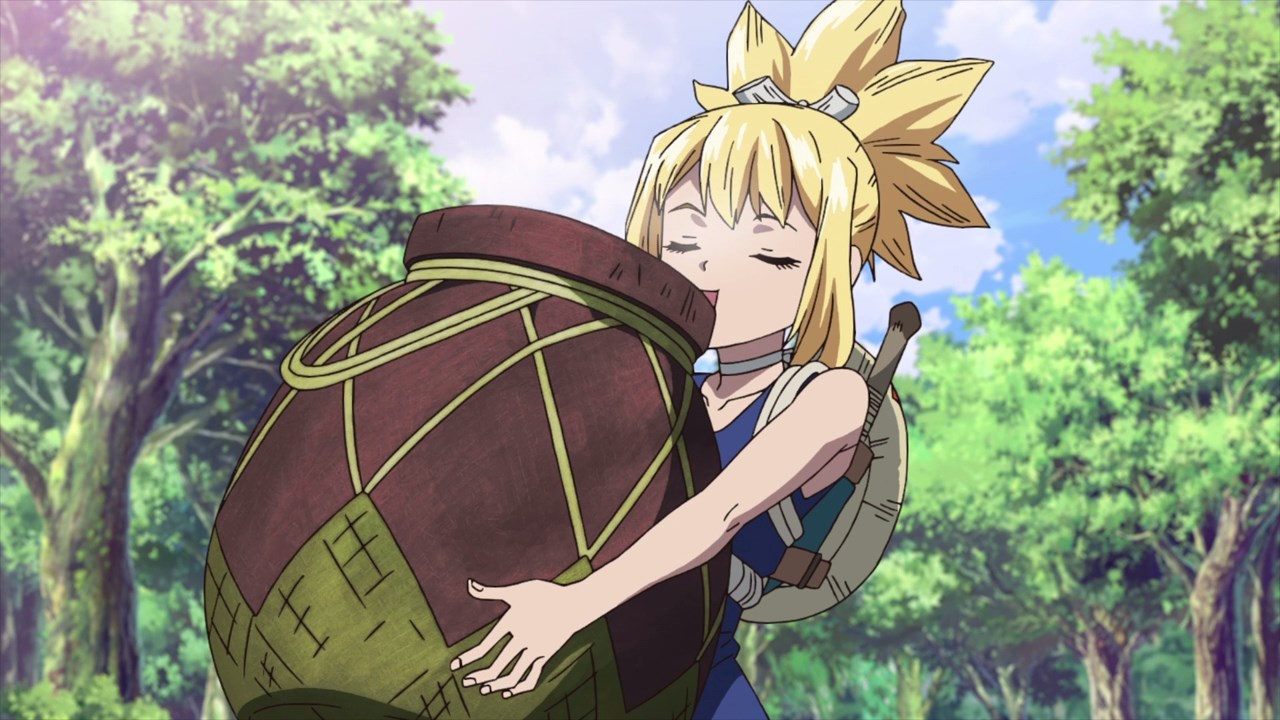 Here’s Kohaku again as she’s now carrying this jug full of hot springs water, which said to have medicinal properties. No, not gamer girl bath water because it no longer exists in the stone world! 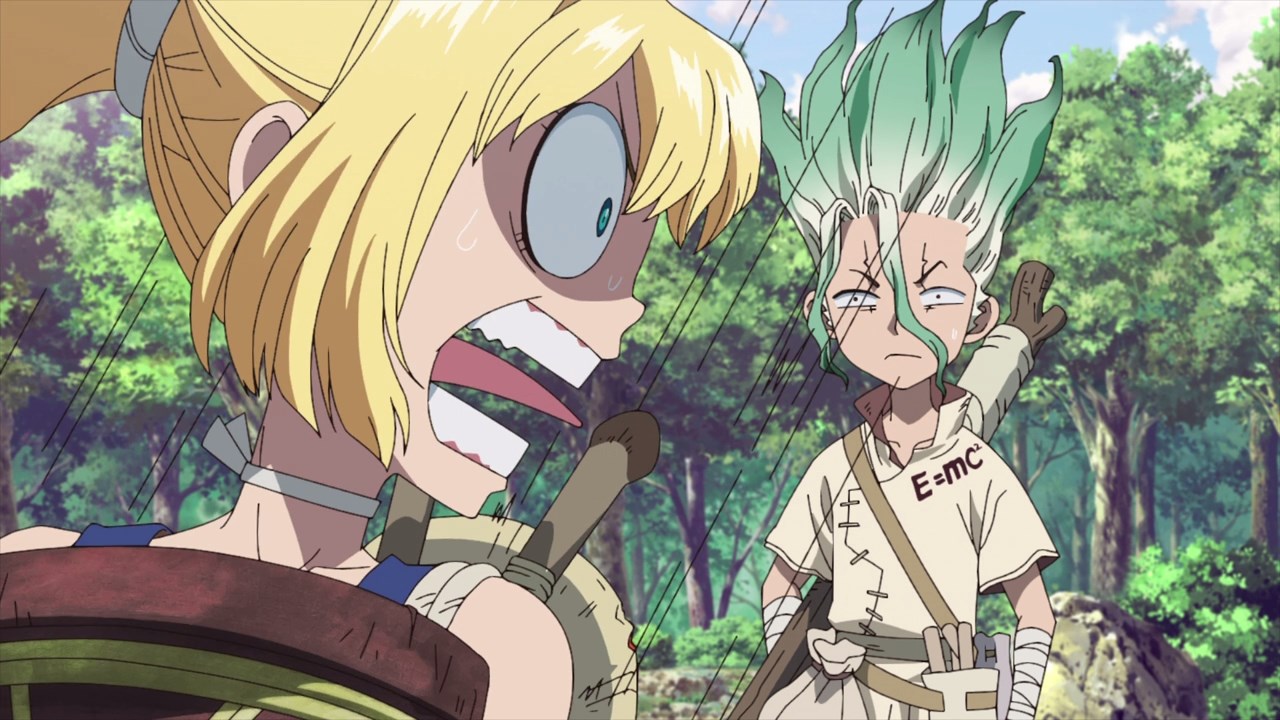 On the other hand, Senku asks Kohaku on why she wants to carry some hot springs water where it’ll get colder overtime, not to mention that it felt unnecessary to carry it around when Kohaku is very healthy?

Well to answer Senku’s question (and in a pissed-off one), Kohaku wants to bring hot springs water for her older sister Ruri. Then again, Senku is not convinced about Kohaku’s reasoning so he decides to carry that jug by himself. 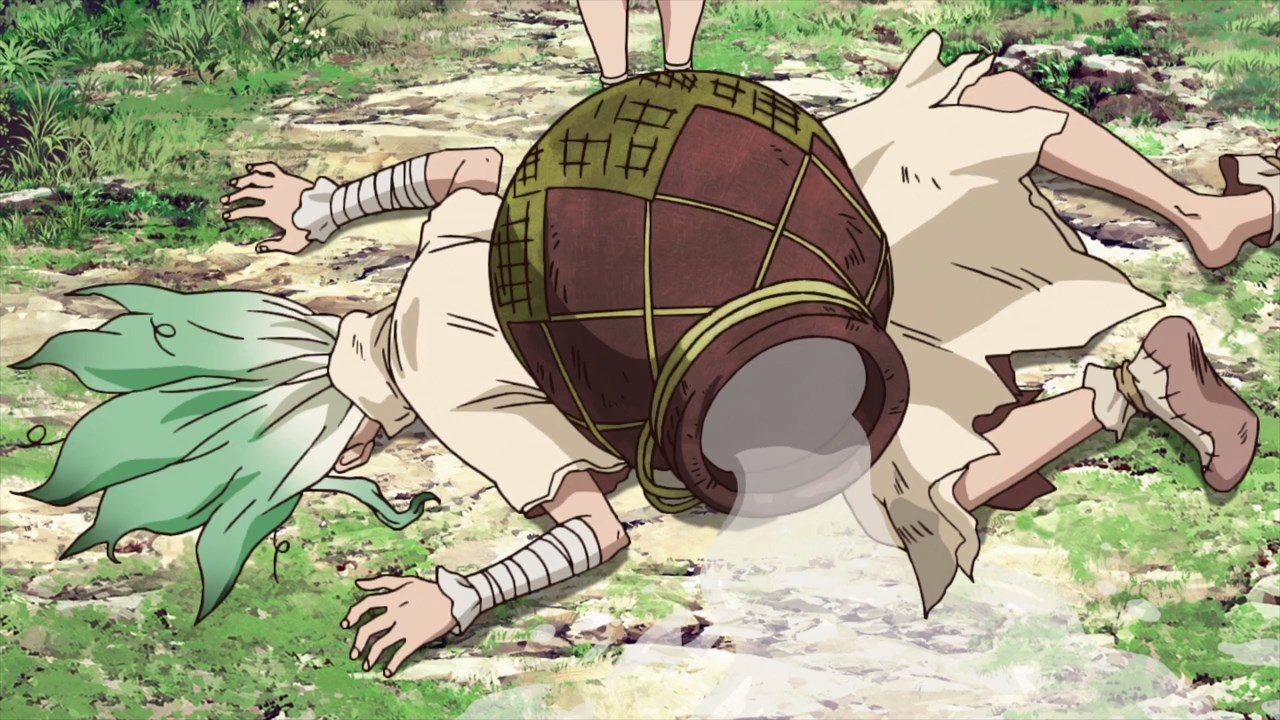 Except that Senku forgot that he’s not Taiju Ooki, therefore he spilled the hot springs water on the ground. Well, I have to say that he’ll leave the carrying to Kohaku. 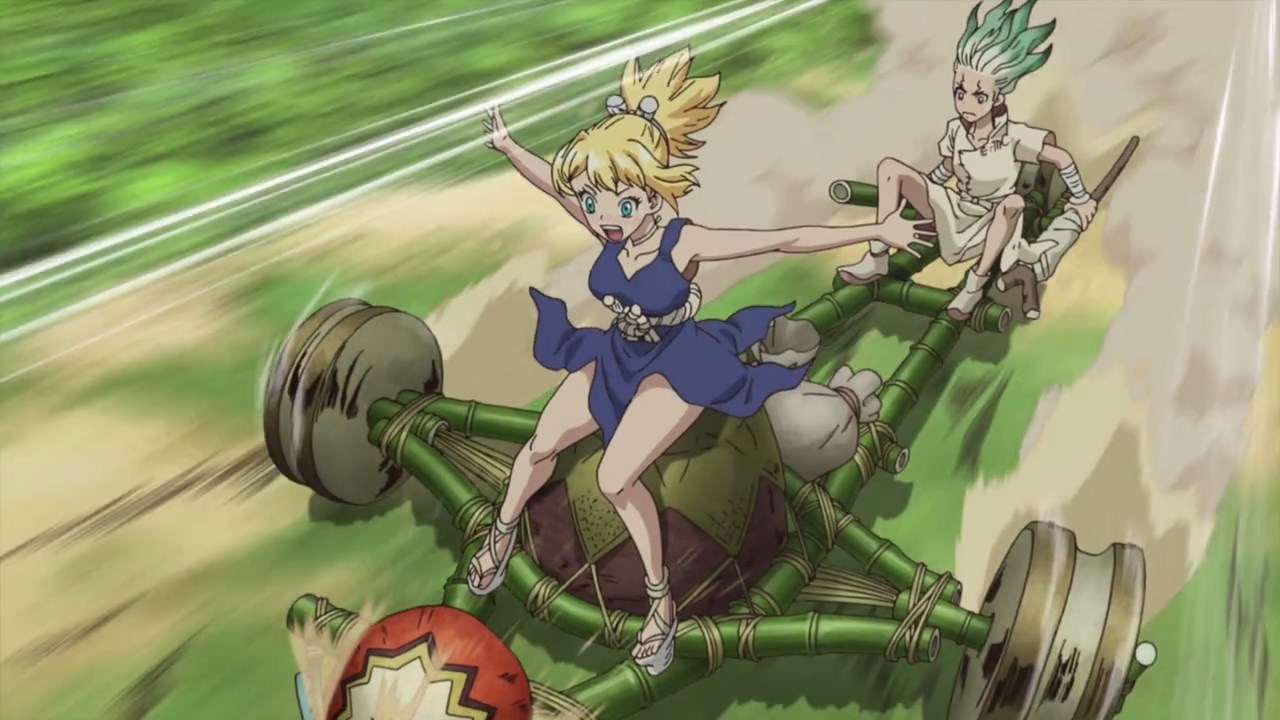 On second thought, Senku will use science to carry this jug safely and quickly. As you can see, he created a car using parts from his pulley system. For Kohaku, she was impressed by Senku’s ingenuity. 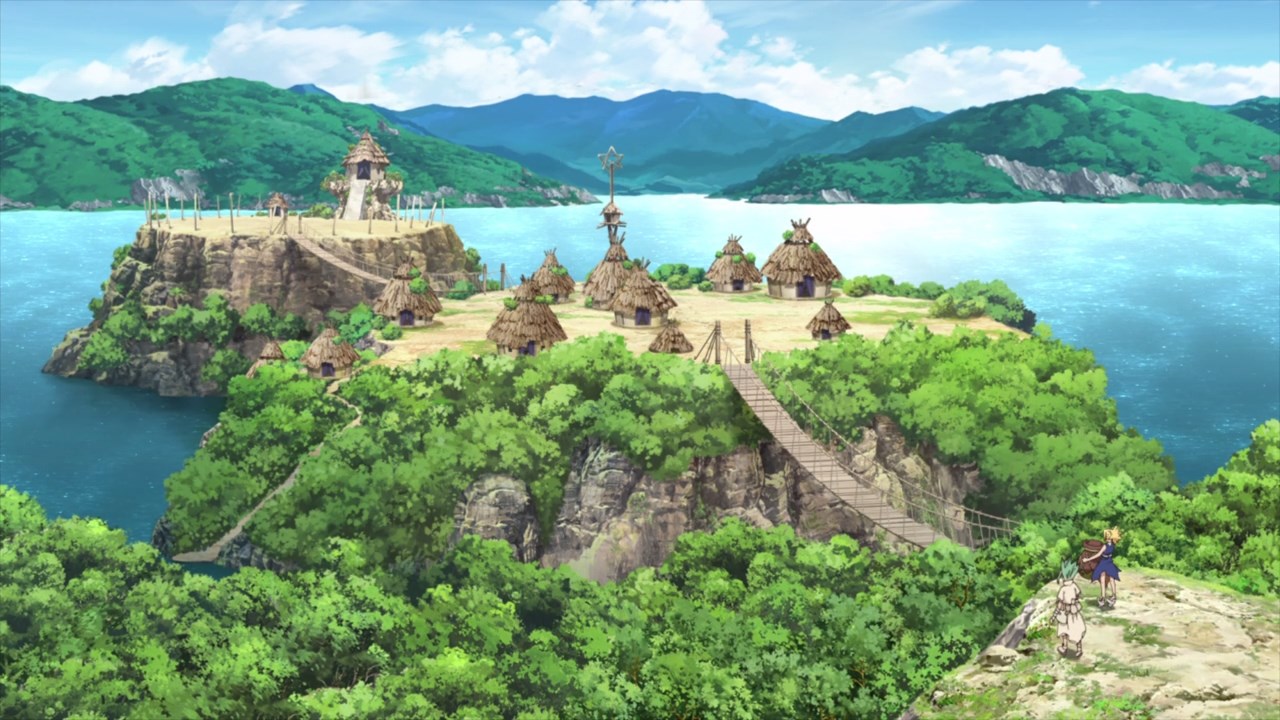 Anyways, they finally reached Kohaku’s village where her fellow humans lived a simple primitive life. Then again, I wonder if this village welcome an outsider like Senku. 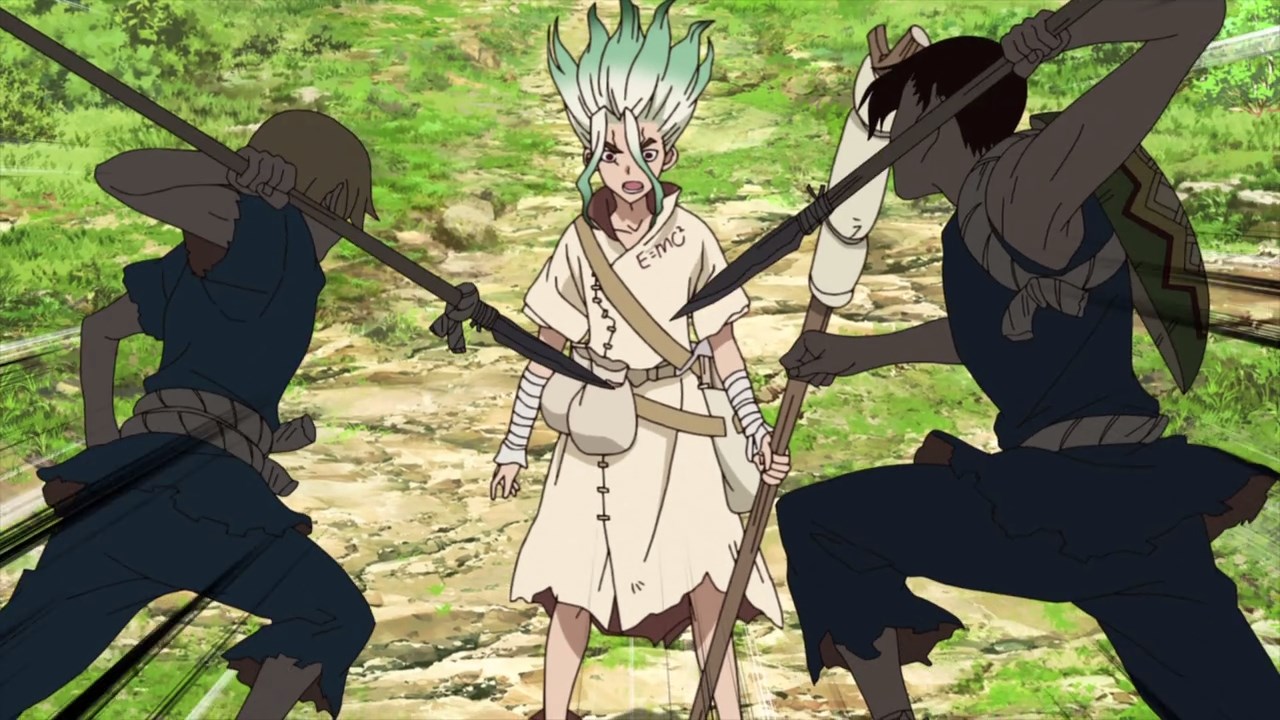 On second thought, this village is not very friendly towards Senku that Ginro and Kinro are about to finish him off. 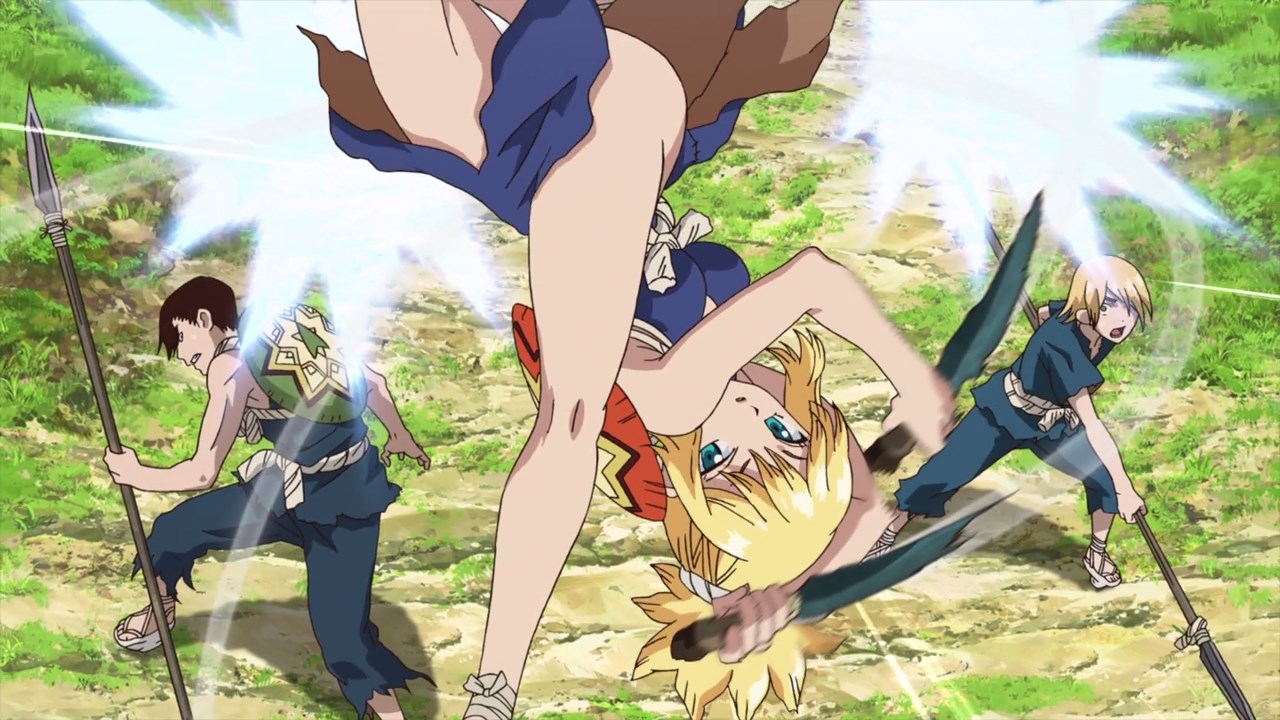 Not on Kohaku’s watch though as she defends Senku’s life. Oh yeah, Kohaku can fight against two people so she’s not some weakling. 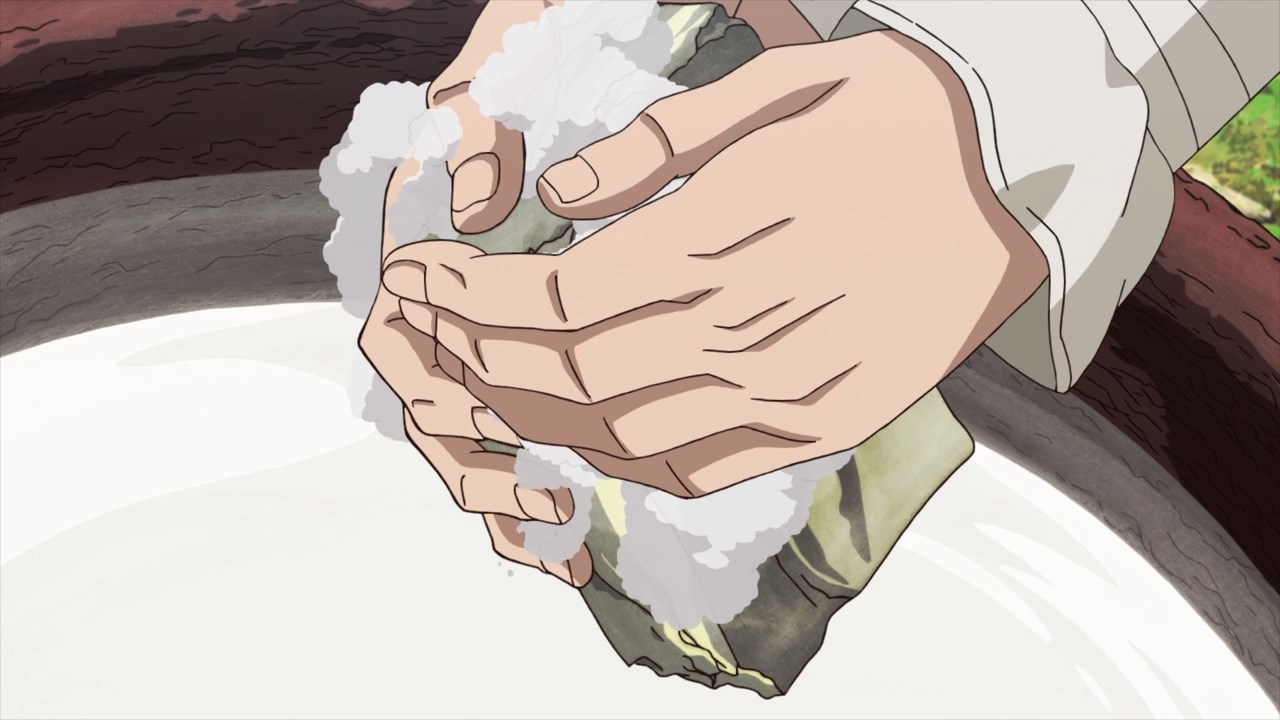 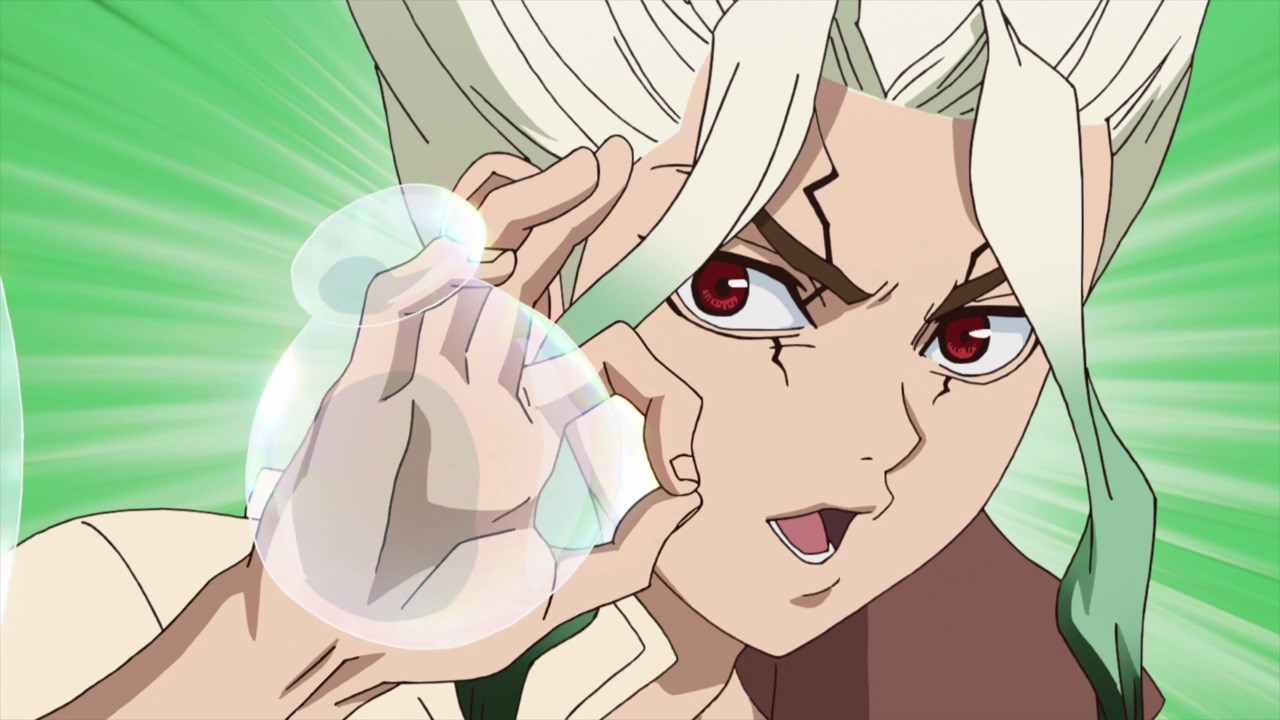 On the other hand, Senku decides to play tricks on them by using soap that he made in his old shed. Coupled with hot springs water, Senku created bubbles! 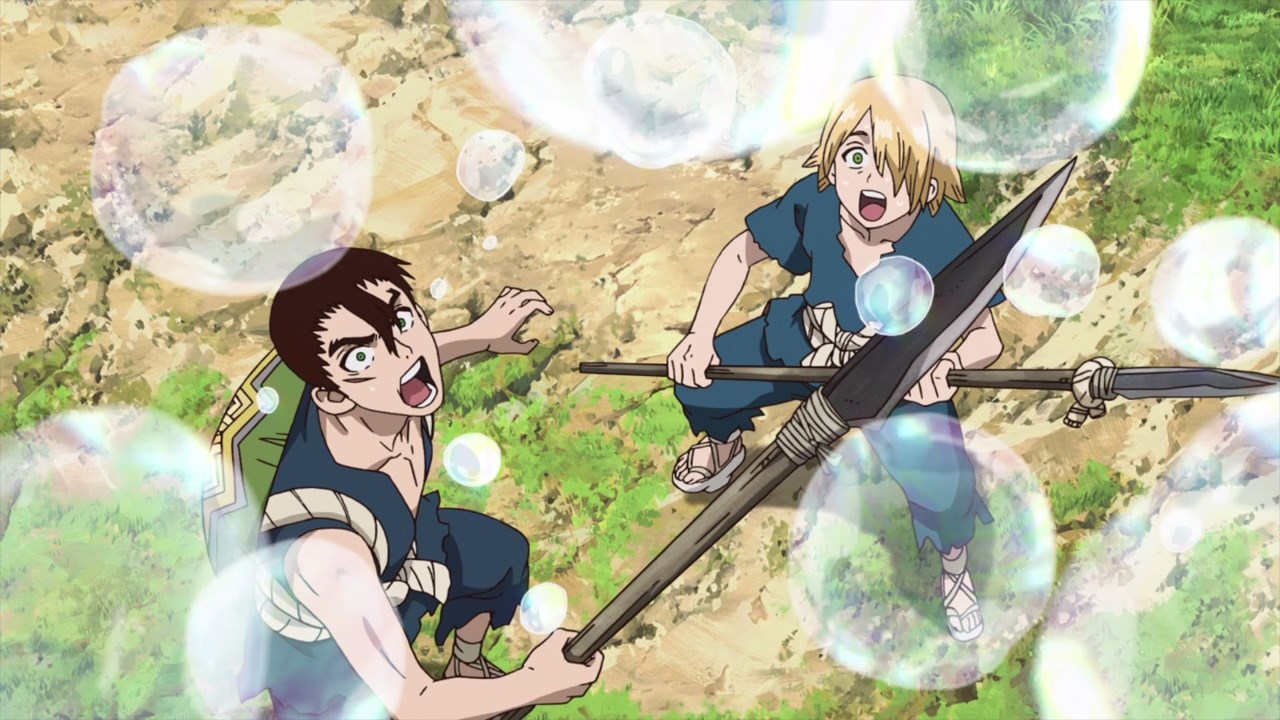 And as you can see, both Kinro and Ginro are stunned to see something they haven’t seen it before. Hmm, I wonder if those people never heard about strange phenomena before like bubbles for example? 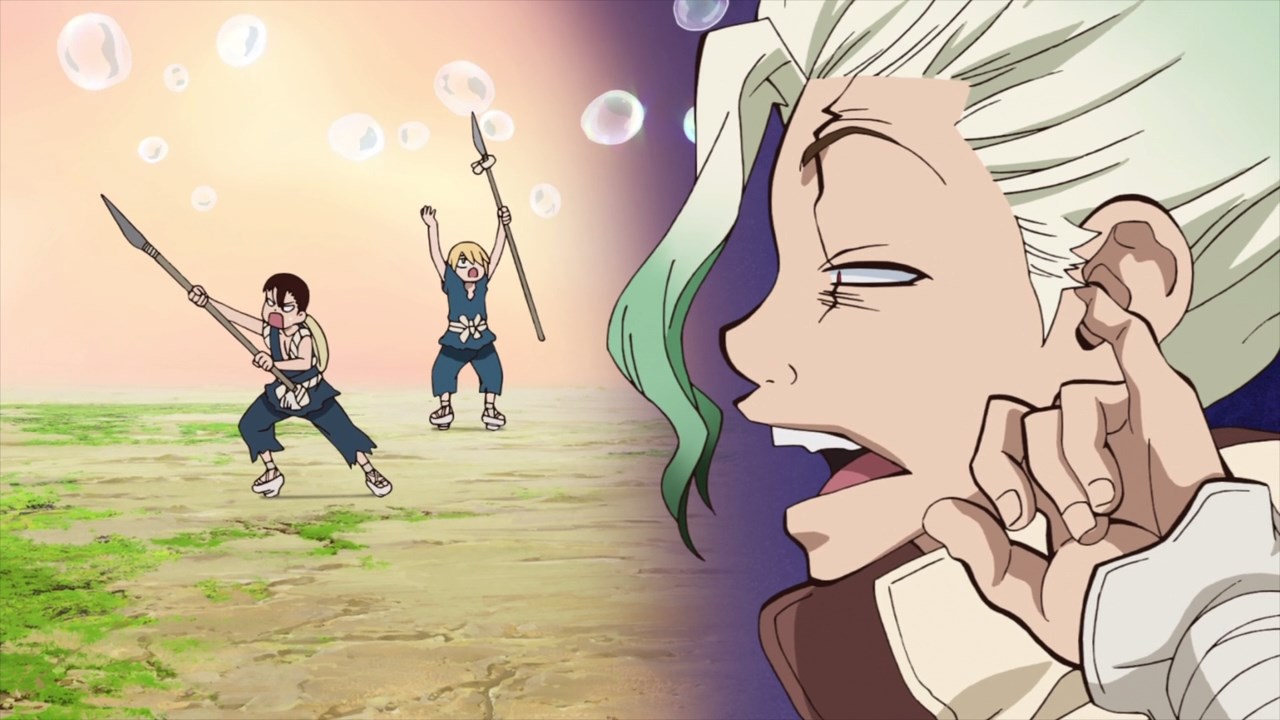 But as for Senku, he felt that these people are not on his same level of intellect. Um Senku, I think you shouldn’t mock them just because you’re some genius who survived being petrified for 3,700 years. 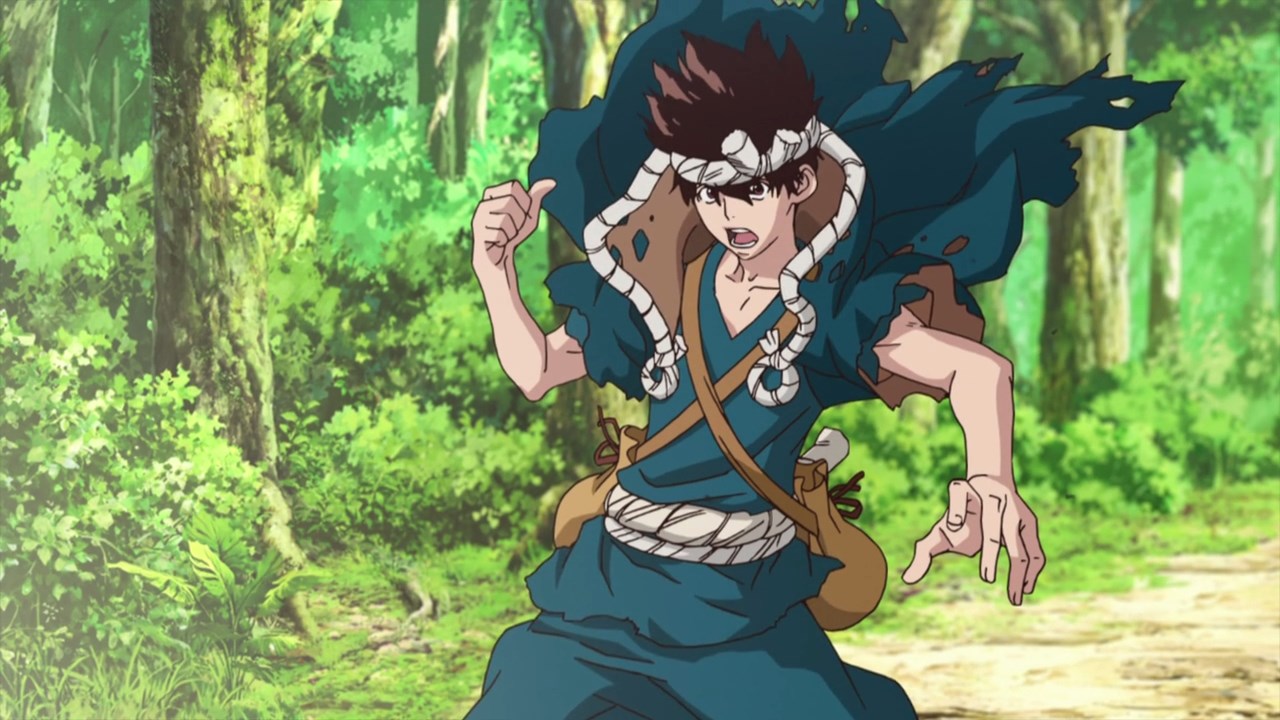 Meanwhile, this character appeared to challenge Senku to a duel. This is Chrome and he calls himself as a sorcerer where he does something that Koharu and the rest will ask him “What sorcery is this!?” while scratching their heads. 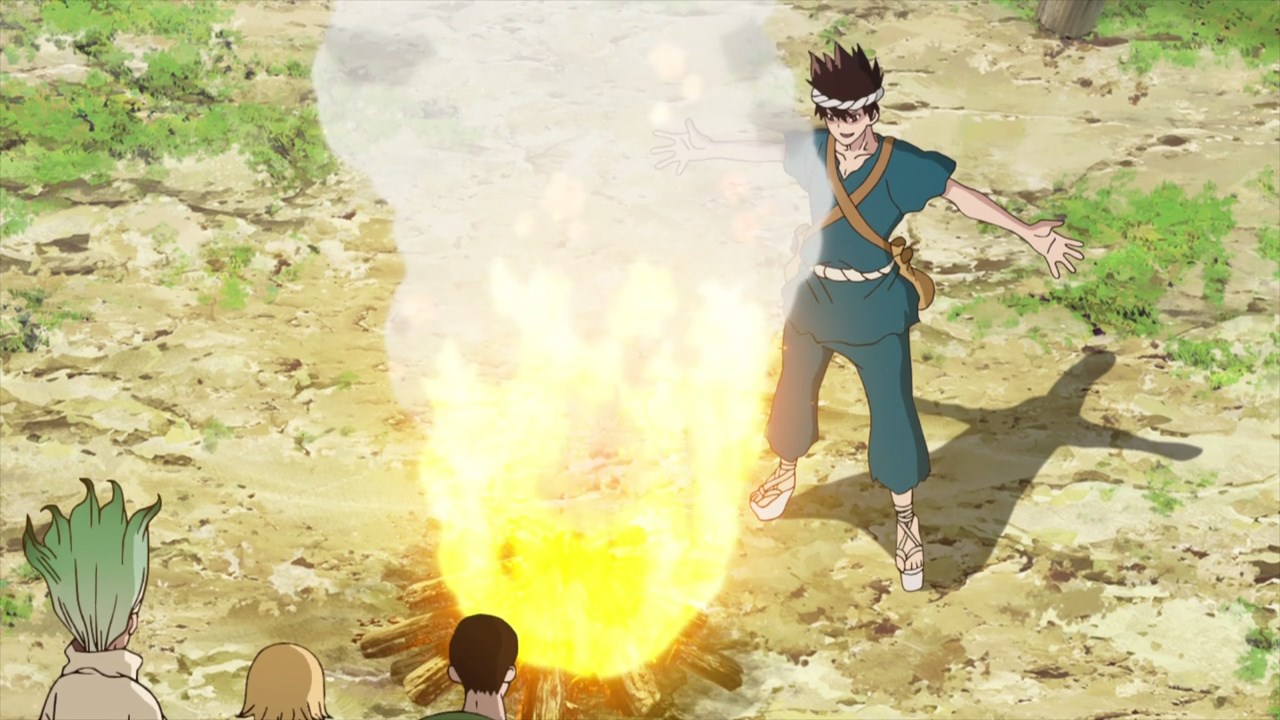 Now then, Chrome will show Senku some magic trick which he calls it as Rainbow Bridge. 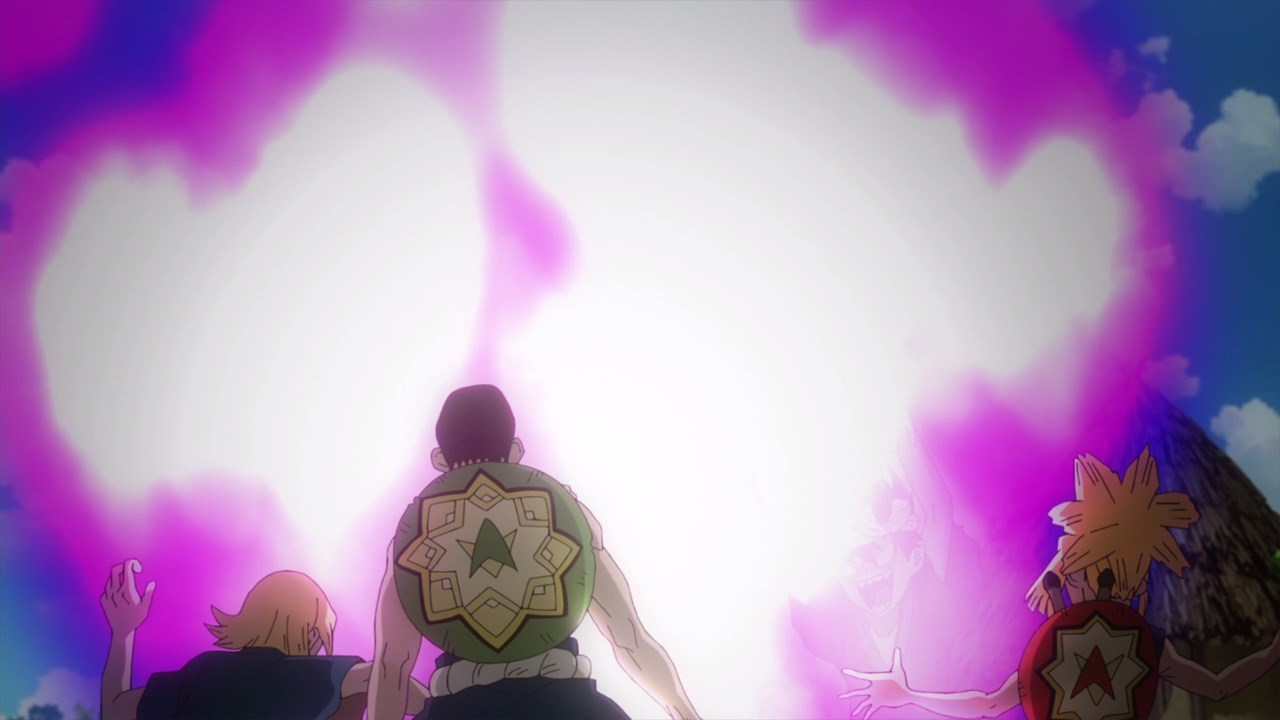 And as you can see, Chrome can change the color of the flame by throwing some dust on it. Pretty neat stuff coming from him, eh? 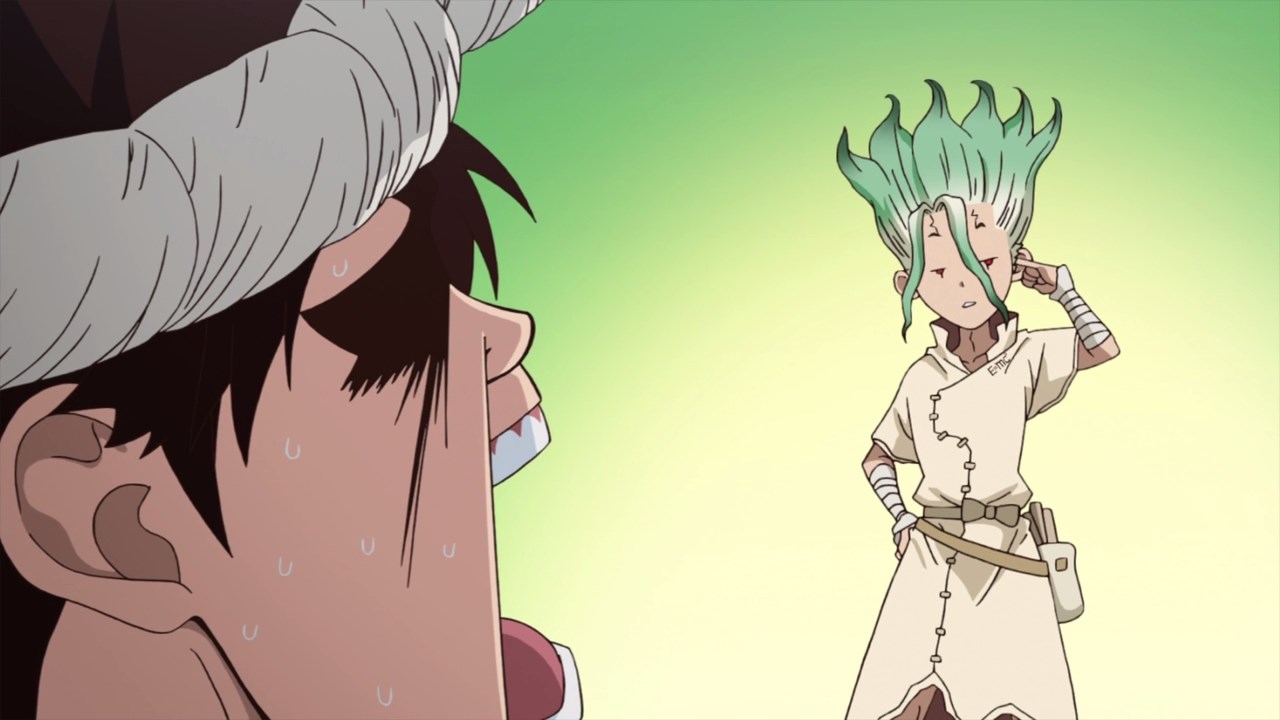 But for Senku however, he’s not impressed by Chrome’s trick as it’s nothing more like a flame test reaction where Chrome throws copper or sulfur to produce colored flames. 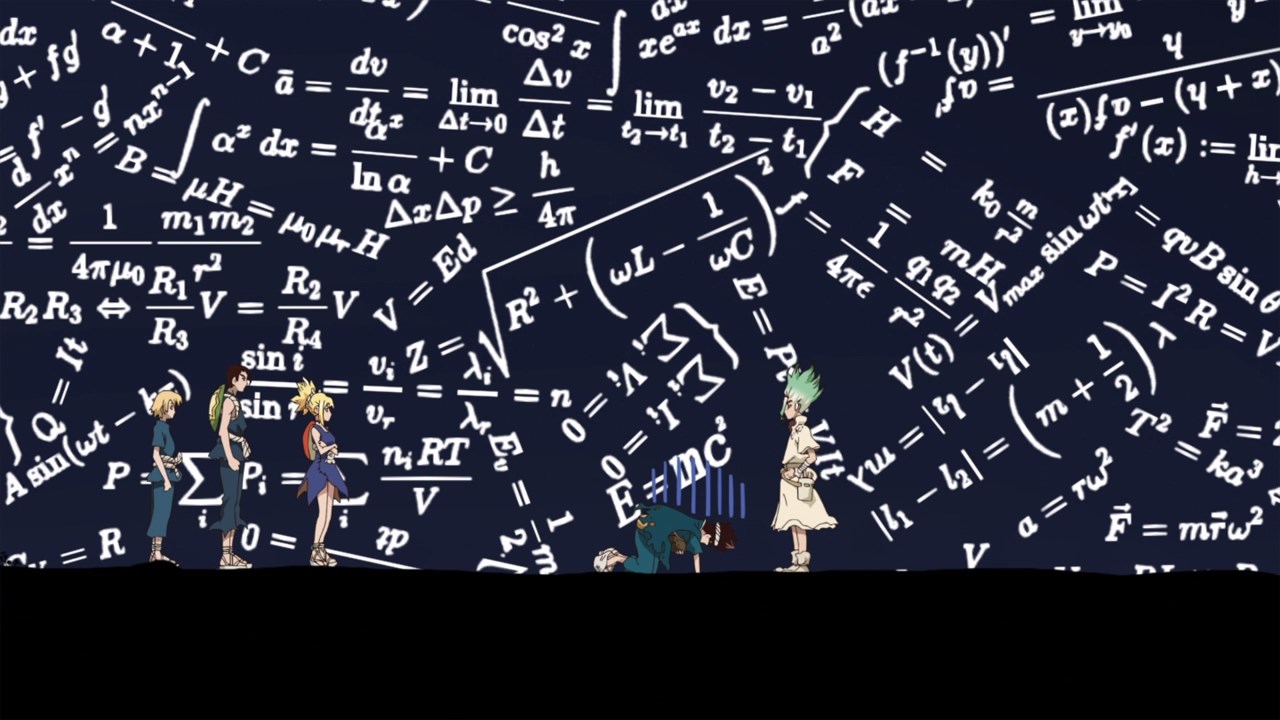 And besides, Senku is smarter than Chrome as he knows every formula and computation throughout human history. So yeah, it’s a complete victory for Senku. 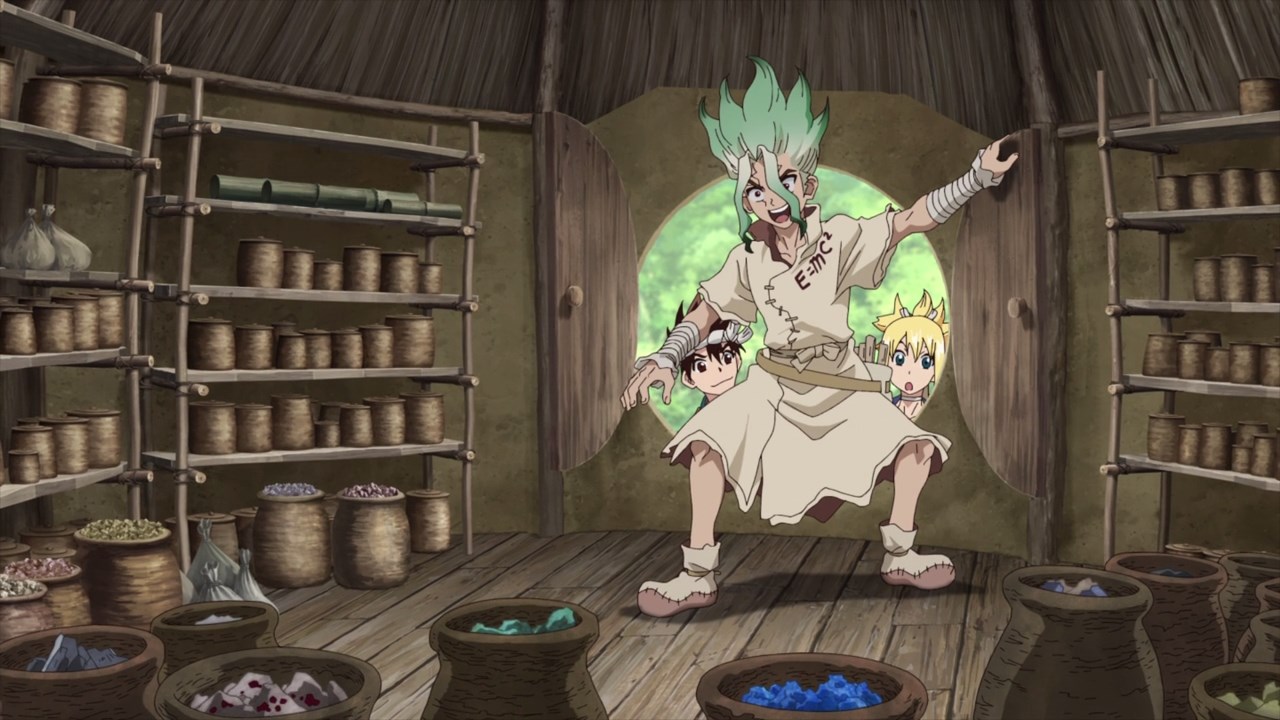 And because of that, he gets to use Chrome’s shed where it’s filled with various herbs other materials. 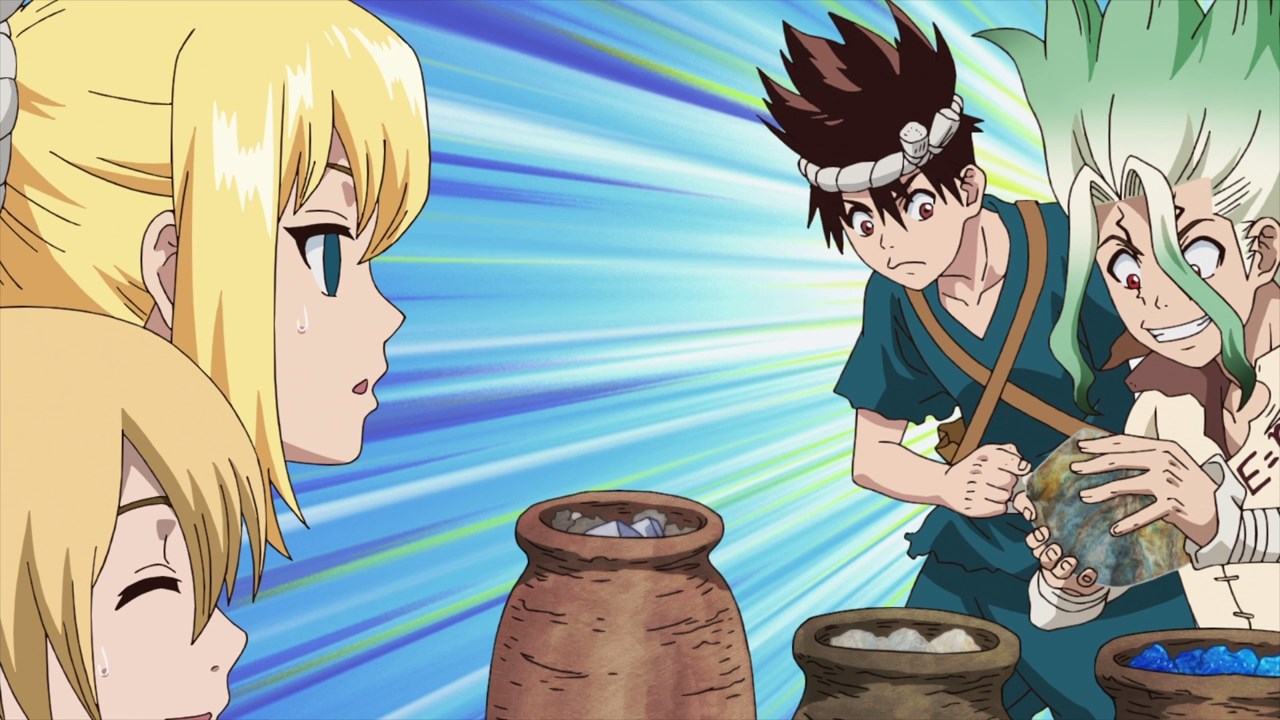 Heck, Senku is surprised to see some uncommon minerals like corundum, although Kohaku sees it as nothing more than a rock. Now then, where’s her sister Ruri? 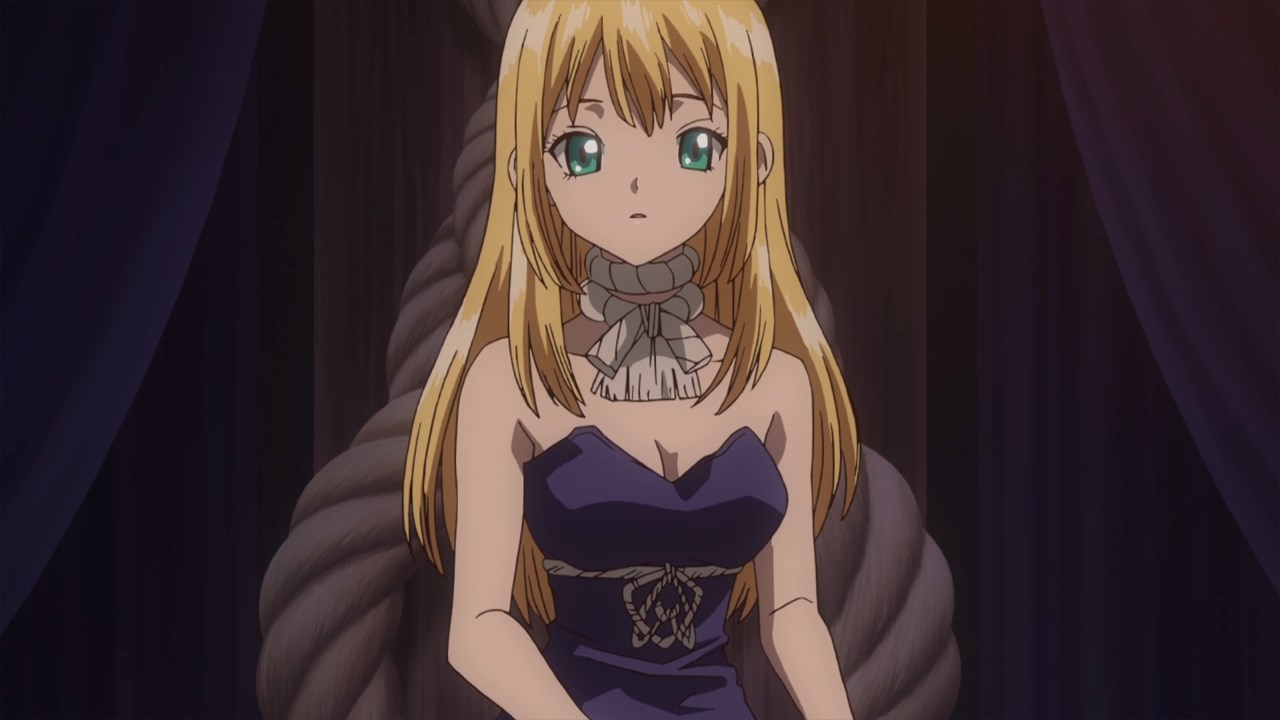 Oh, there she is as it turns out that she’s the village leader but then again, her people doesn’t want to let her see Senku yet. 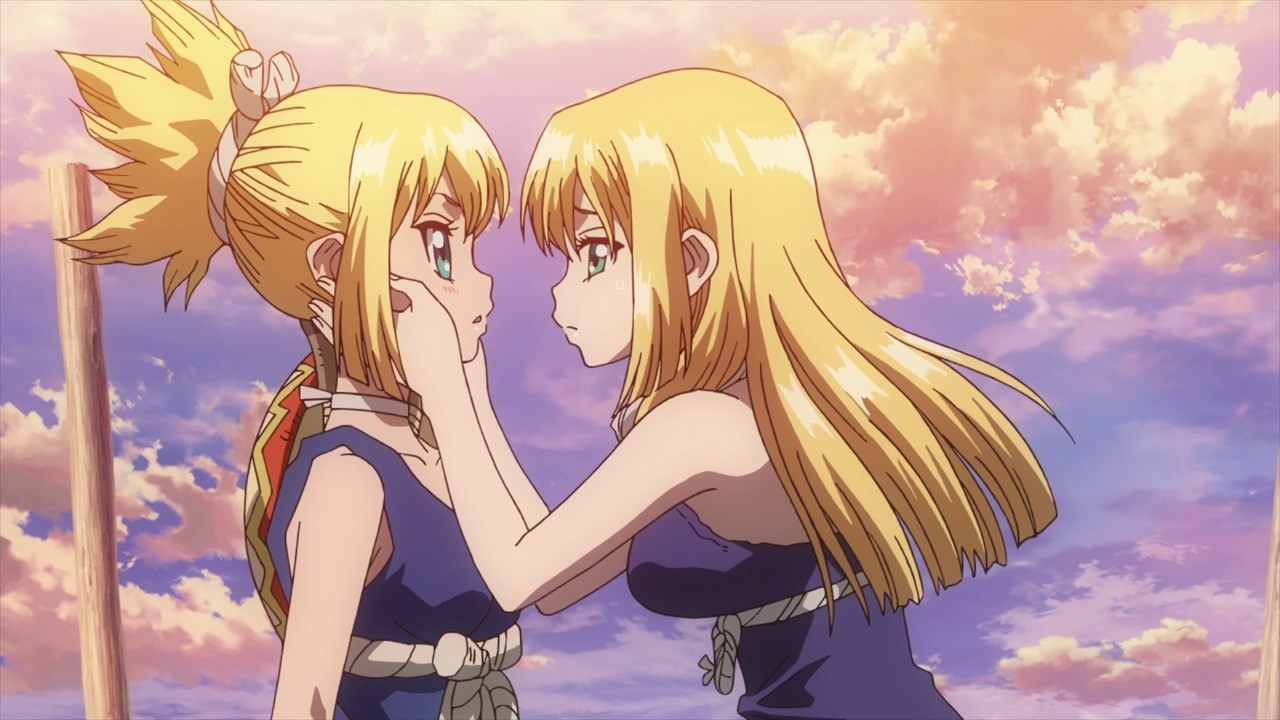 On the other hand, Ruri is glad to see Kohaku safe and sound. C’mon, she was saved by Senku thanks to the power of science! 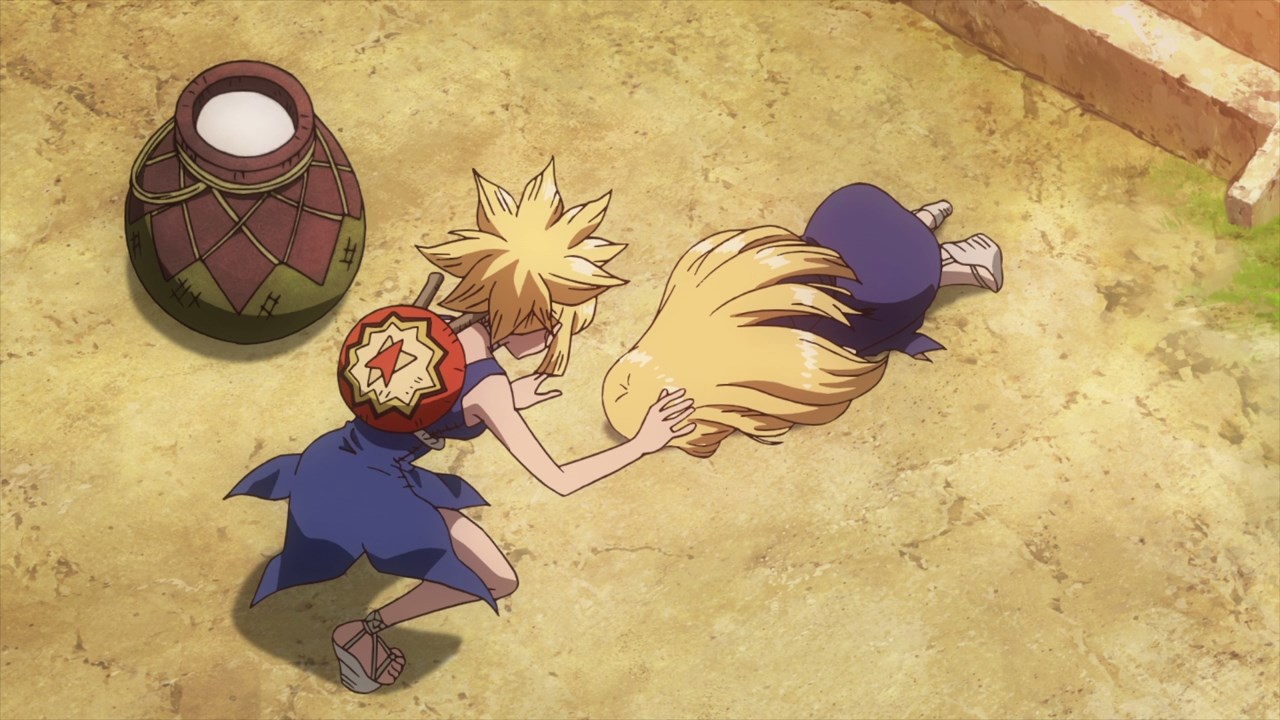 Sadly, Ruri is actually gravely ill which is why Kohaku wants to carry the hot springs water to her older sister.

But then again, drinking hot springs water is not good and besides, it might not cure Ruri’s illness with just water. 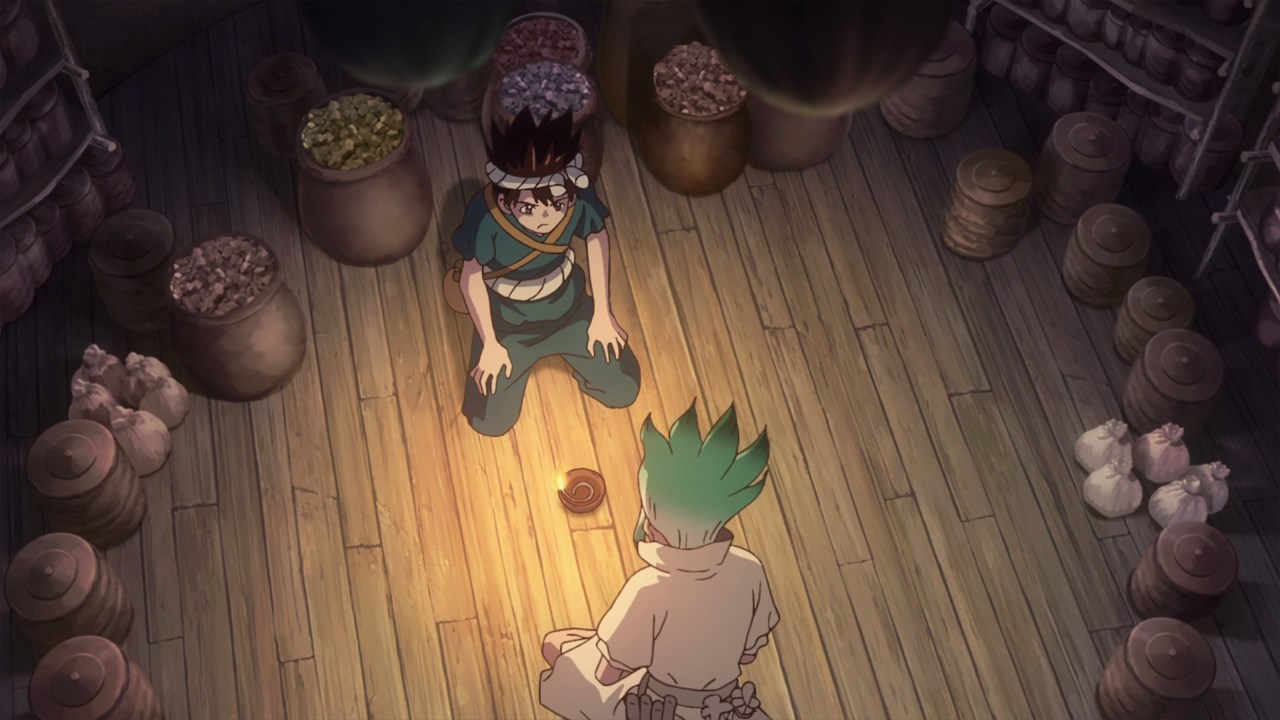 One last thing, Senku told Chrome about the history of humanity, although he’ll make it brief and go straight to modern civilization instead. 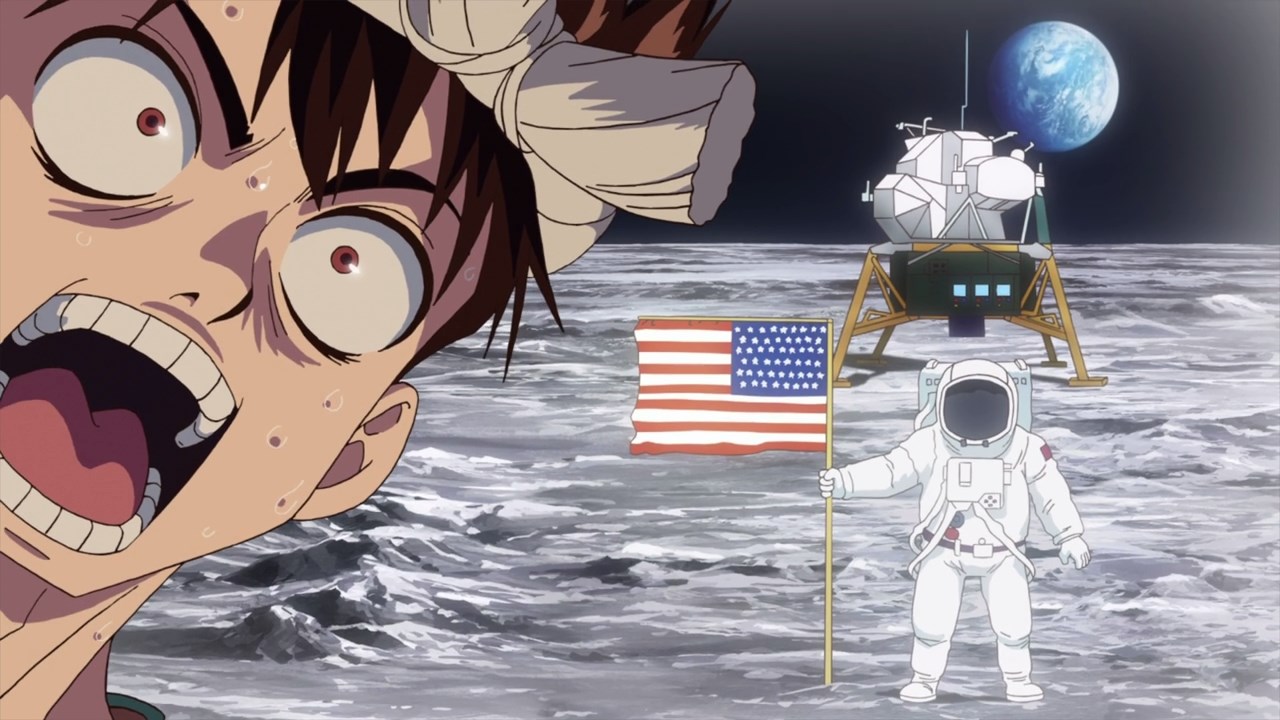 But speaking of Chrome, he’s blown away by Senku’s story about modern civilization ranging from computers to putting a man on the moon.

Too bad that modern civilization went kaput when humanity got petrified, rewinding Earth back into the stone age! 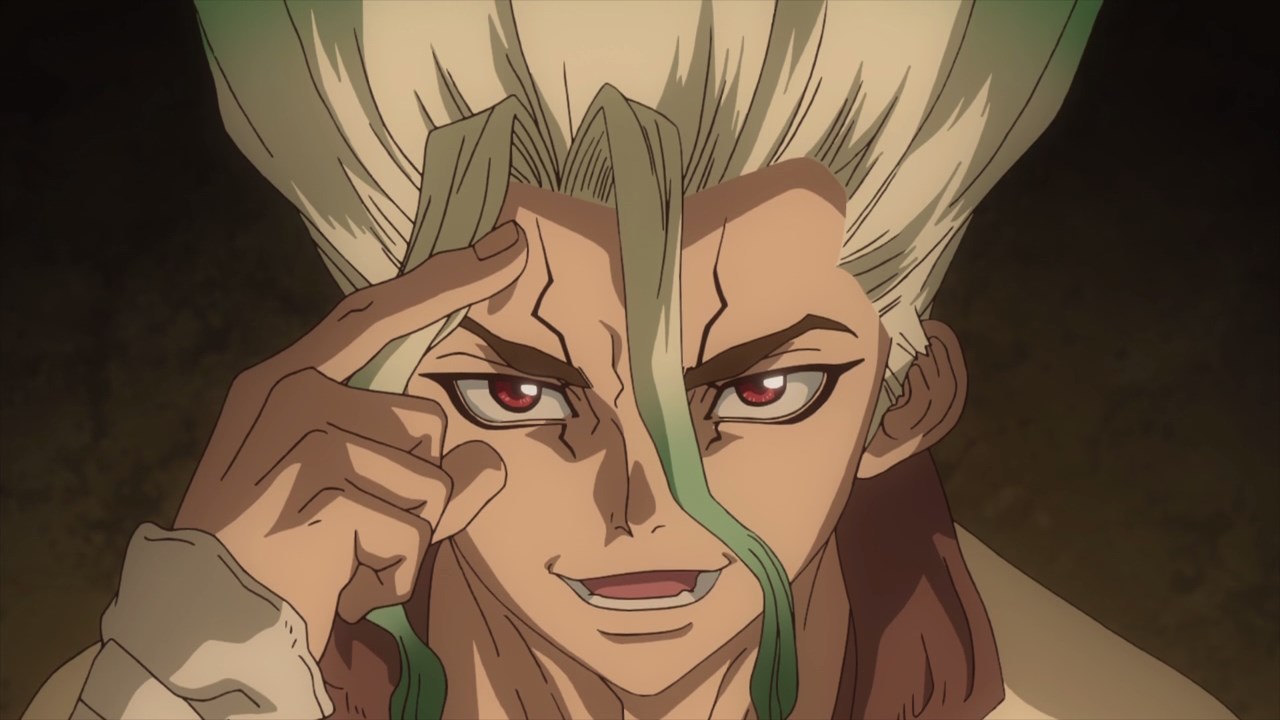 But you know what, Senku will bring modern civilization back in a short amount of time as he has the knowledge of it. 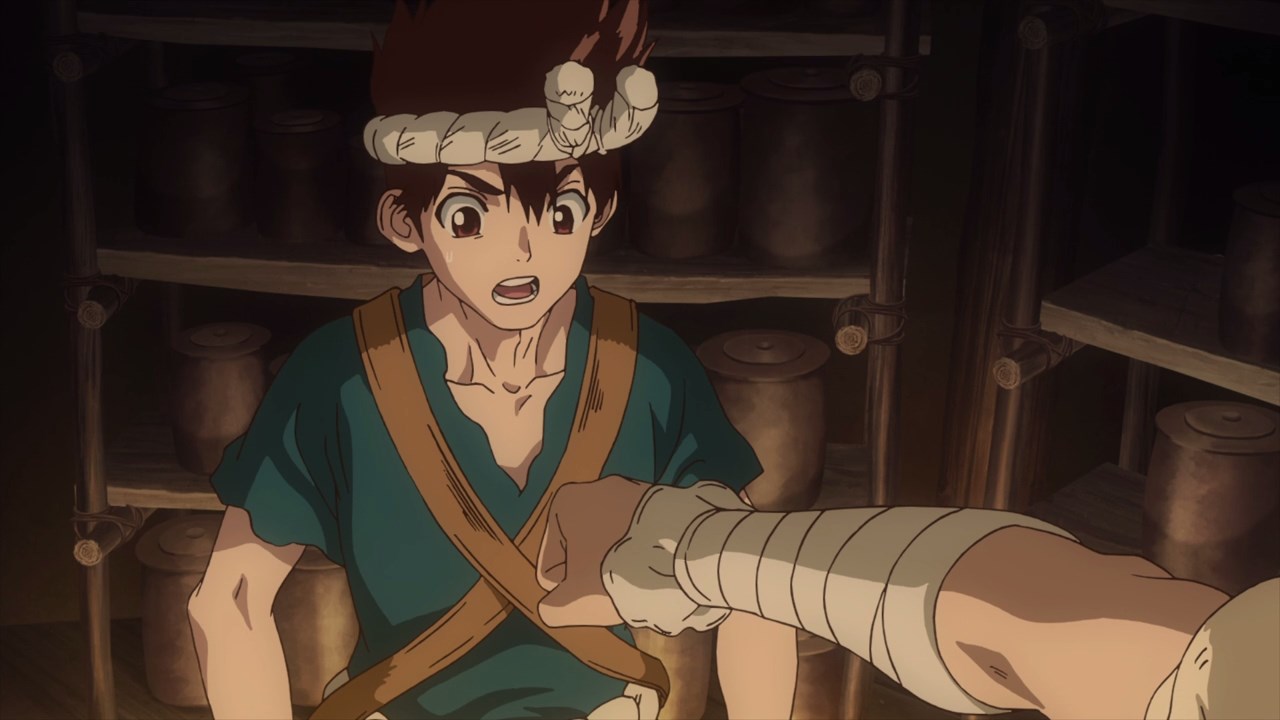 Of course, he needs some hands and since Taiju Ooki and Yuzuriha Ogawa are currently spying on Tsukasa Shishio, Senku wants Chrome as his partner-in-crime since he’s not just a sorcerer, but a freakin’ scientist like him. Not sure how it works, but it’s better to have two geniuses than one!

Anyways, I think the next episode will be the start of a beautiful friendship between Senku and Chrome as they’ll work together to bring modern civilization back, as well as stopping Tsukasa Shishio and his army. But first, they need to find a way to cure Ruri’s illness before bringing the world back to the modern age.