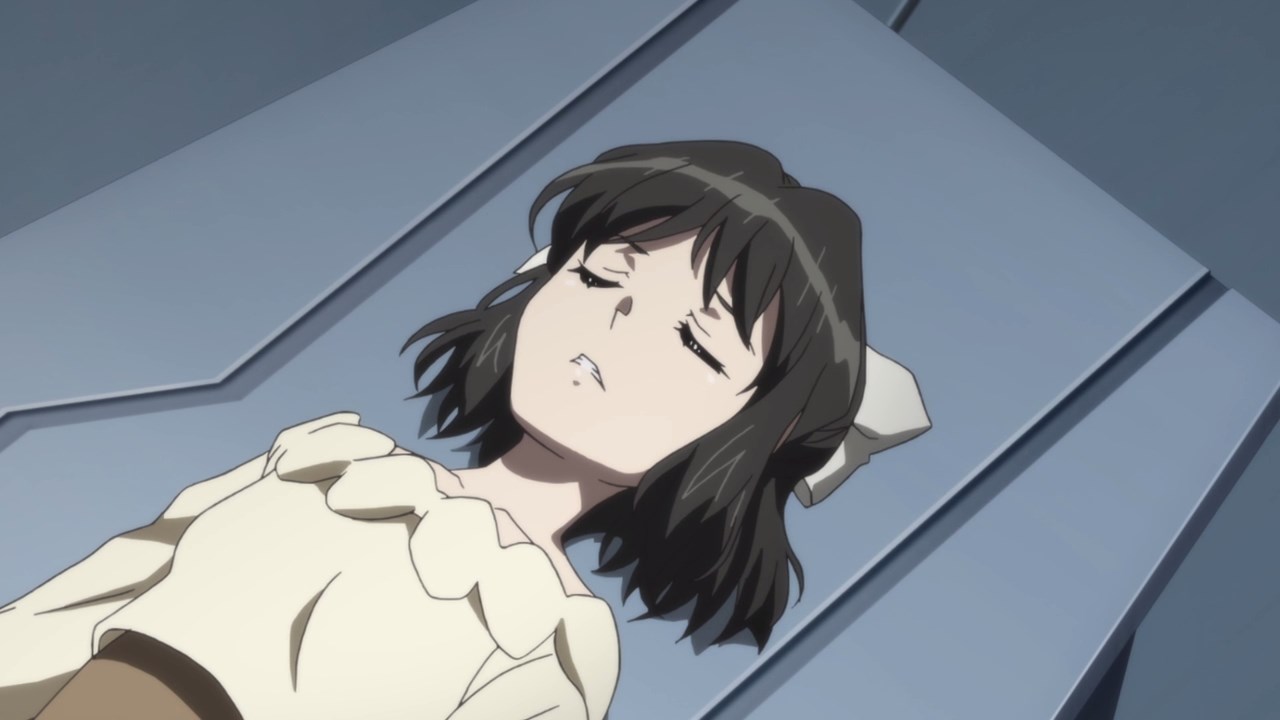 Let’s start this episode Miku Kohinata where she’s having a nightmare. More importantly though, Miku is unaware that it’s very noisy outside this room. 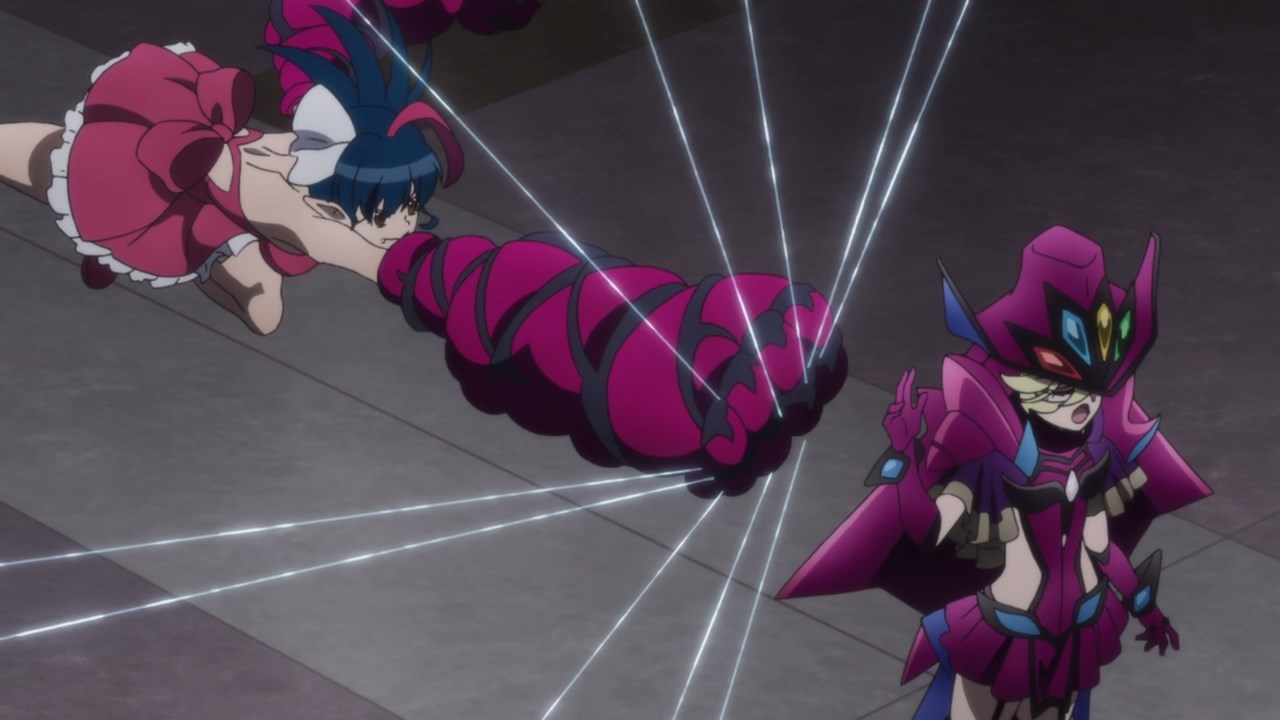 But anyways, it’s time for Noble Red to fight against Carol Malus Dienheim as they consider her as a threat to their plans.

However, neither Millaarc Cranstoun nor Elsa Bete can’t put a dent against someone who can dissect the world. 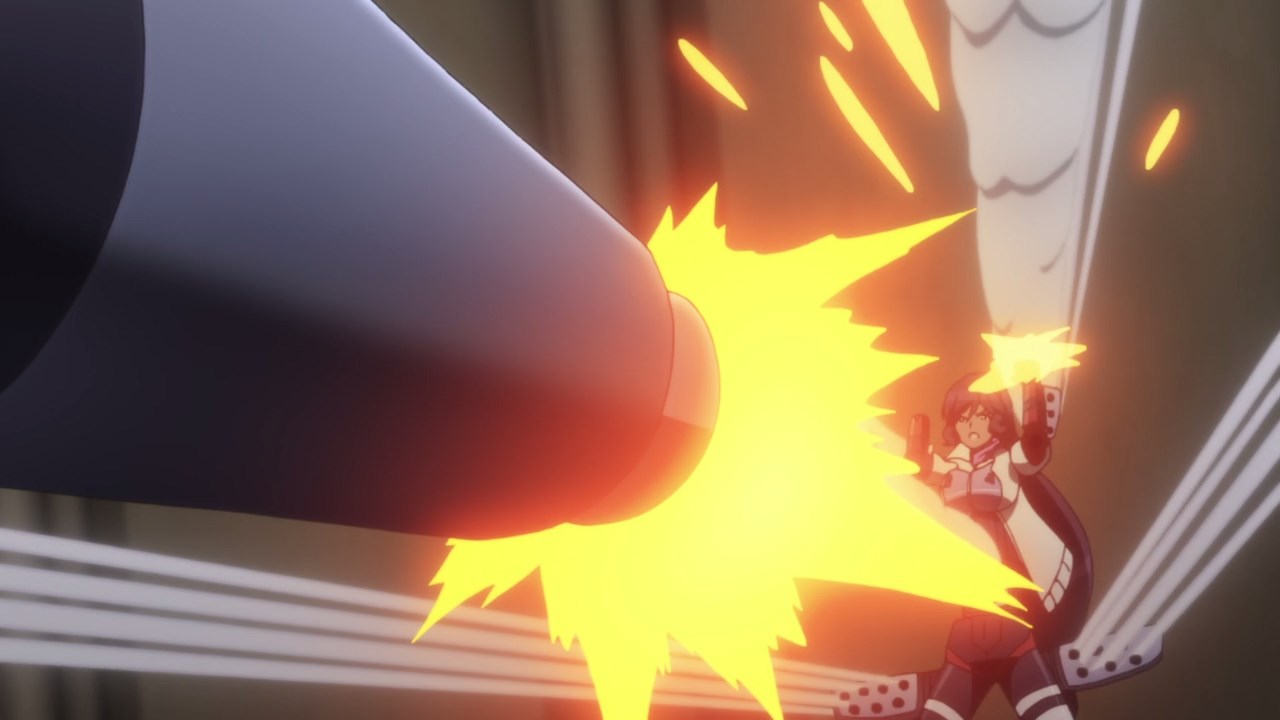 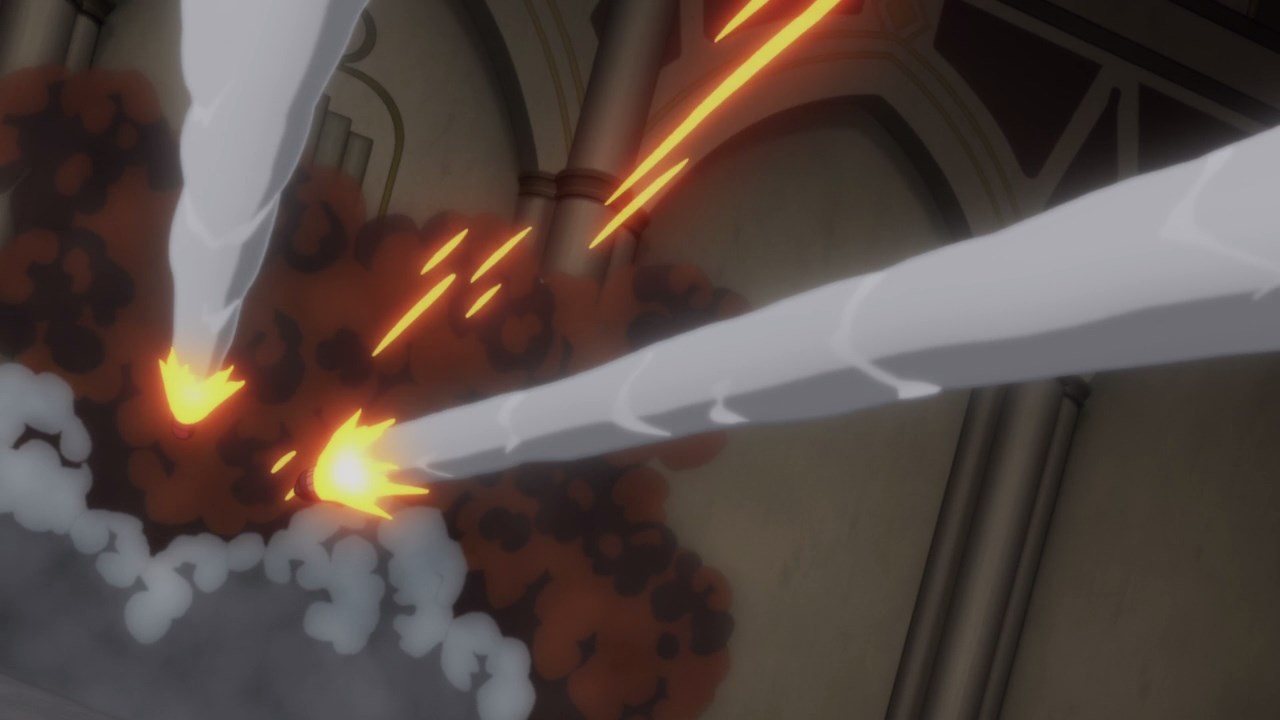 On the other hand, there’s Vanessa Diodati who throw everything at Carol Malus Dienheim, including a giant missile being fired from her abdomen. It would be nice if Vanessa fired her boob missiles. 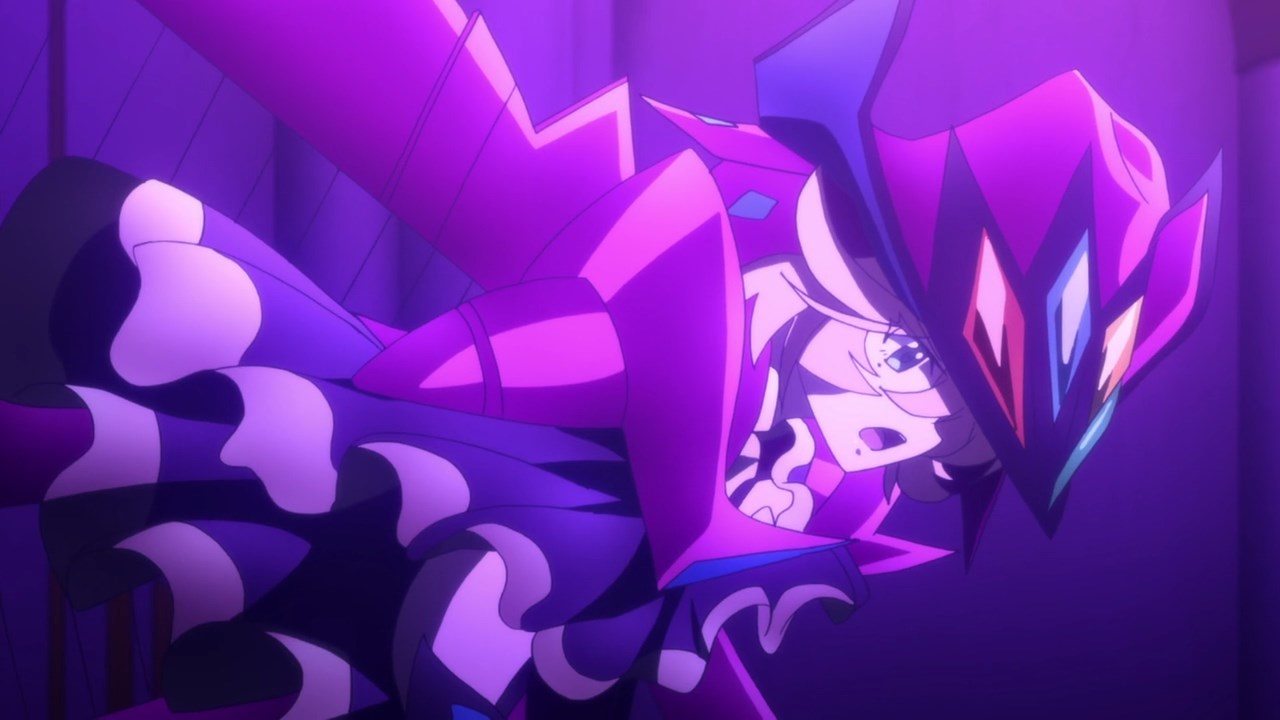 Unfortunately for Noble Red, every attack they throw at doesn’t work against Carol as she unleashes a powerful gravity bomb against these remnants. 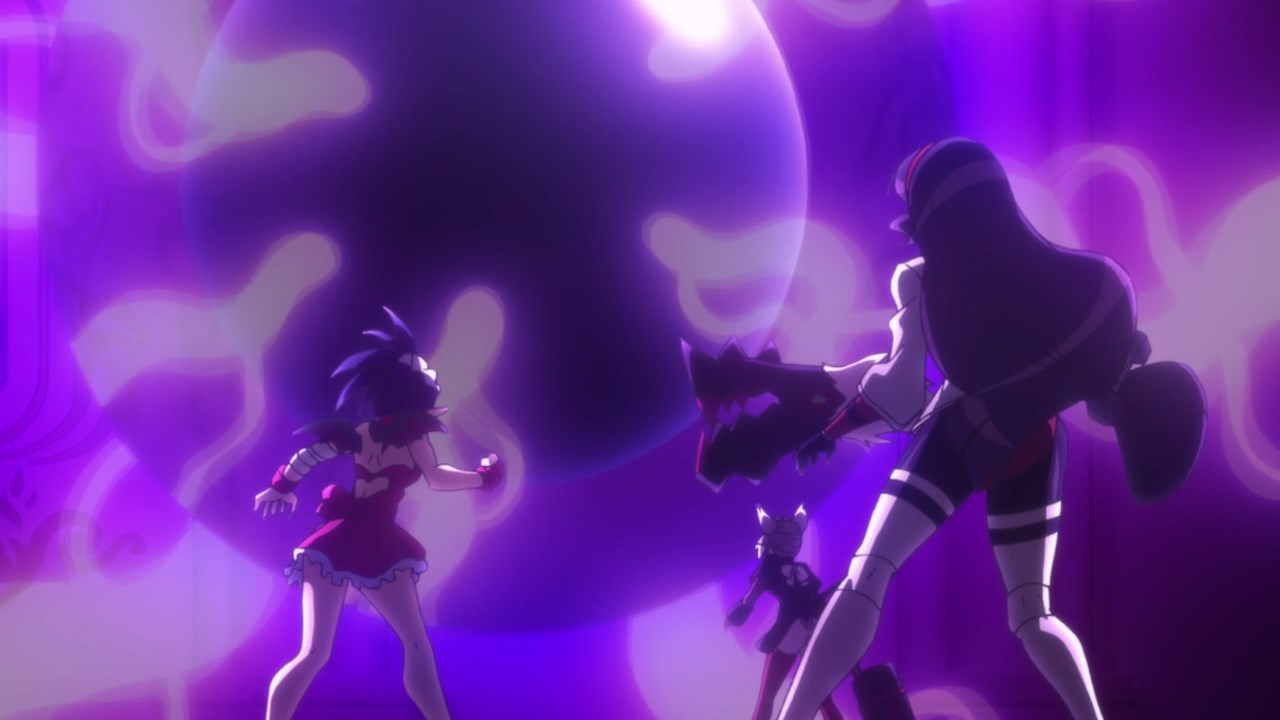 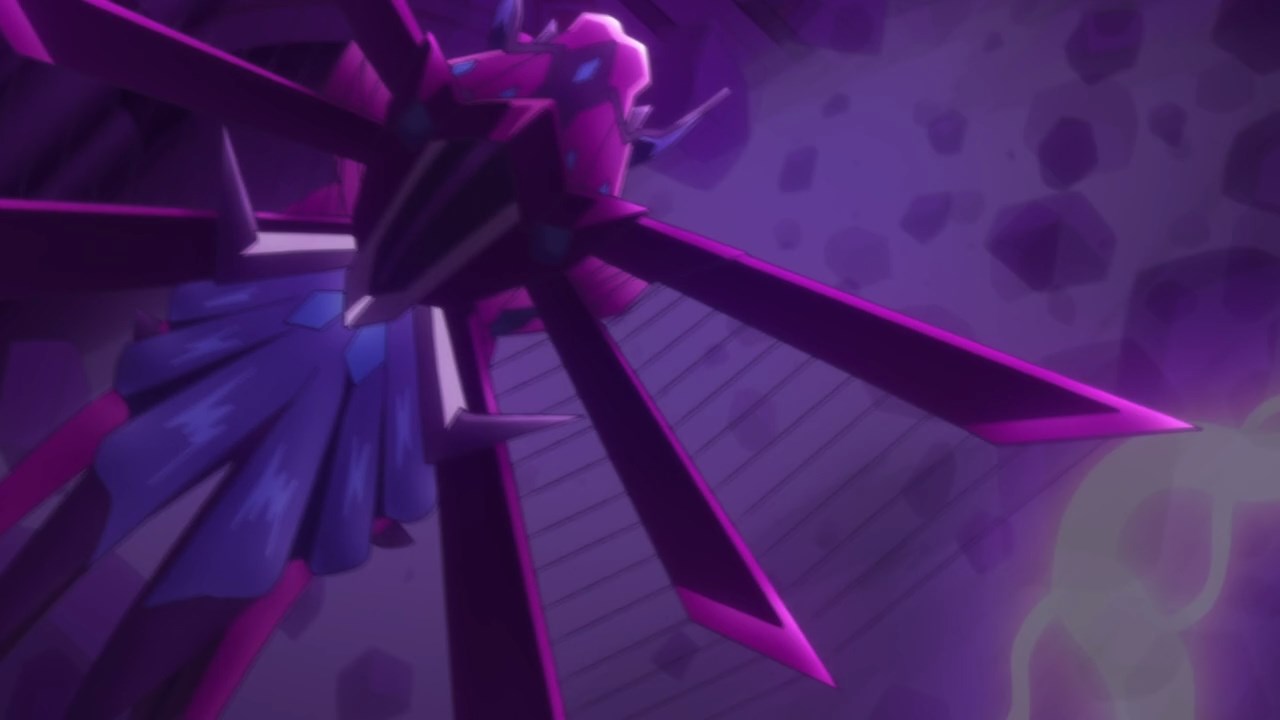 And as you can see, Vanessa and the rest couldn’t survive that had they stay for too long. In any case, looks like Noble Red couldn’t beat Carol Malus Dienheim, although it would be better if they use the Labyrinth of Daedalus to trap Carol. 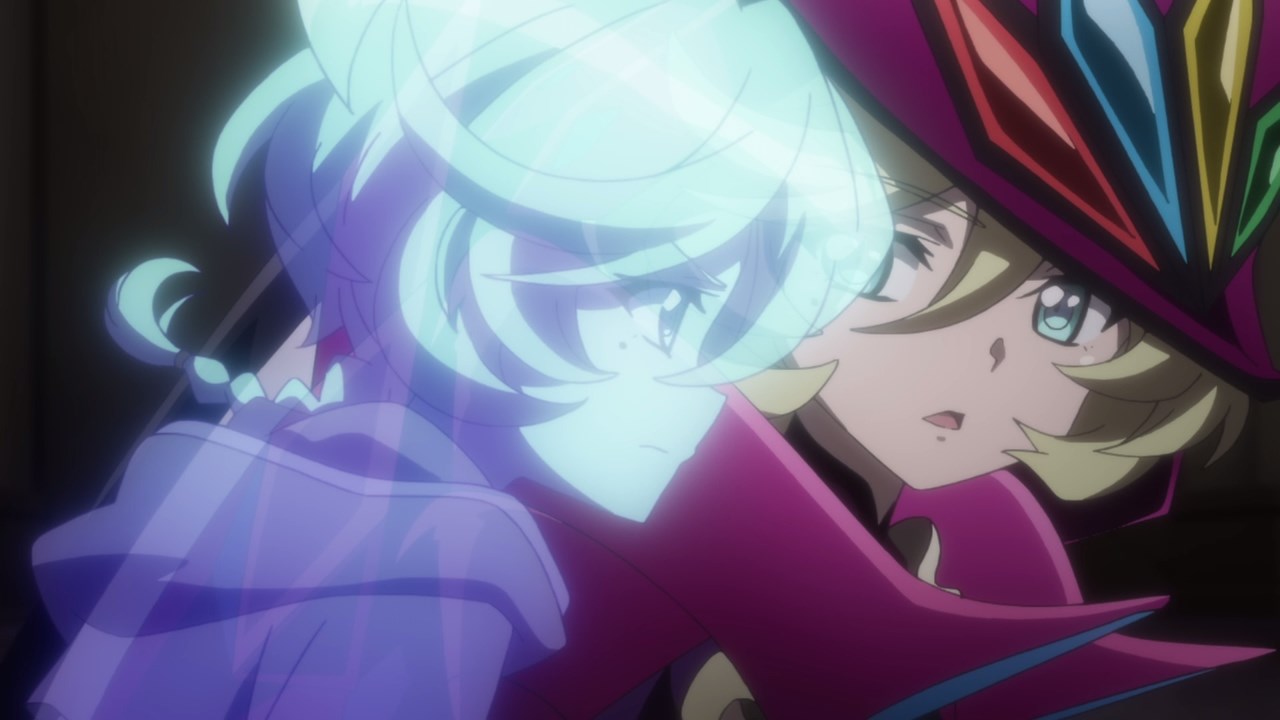 For now, it’s time to rescue Miku Kohinata as Elfnein told Carol to go to the room where Miku is held captive.

But even then, taking Miku out of her cage and wake her up is not easy since she’s bound by the Bracelet of Shem-ha. 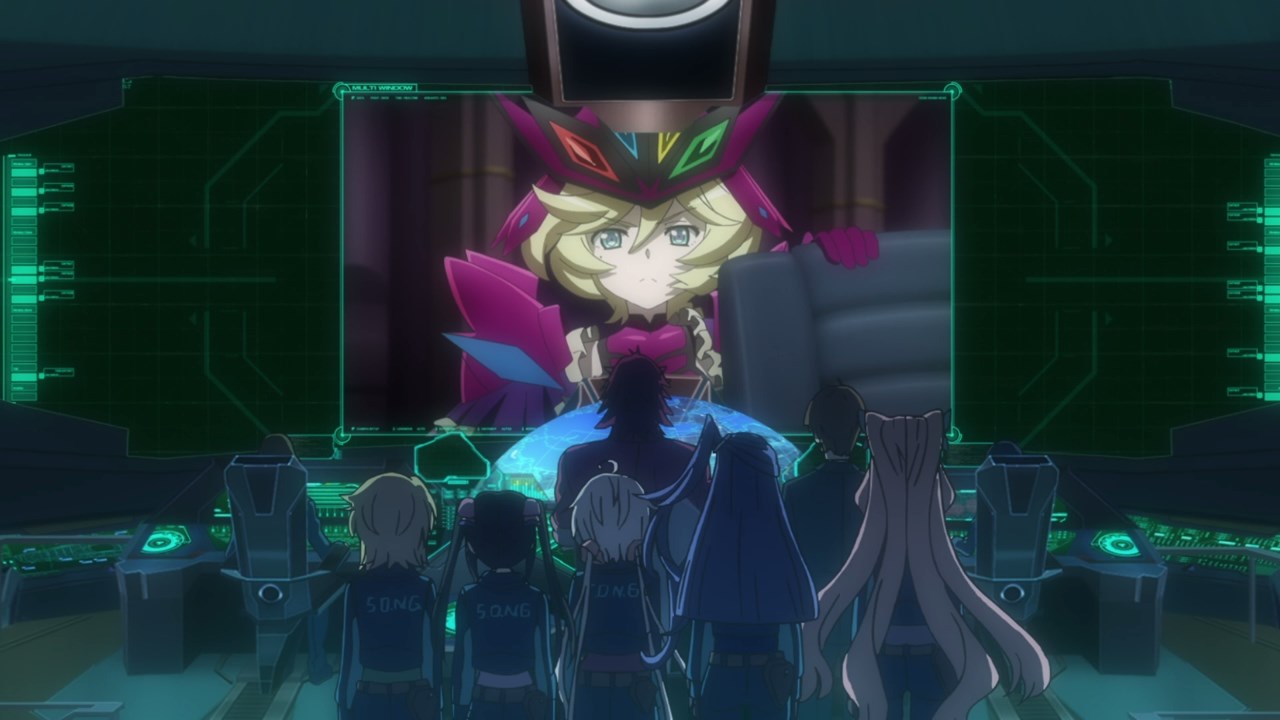 Thus, Carol Malus Dienheim asked SONG for help since she need the power of the Symphogear users to destroy the Custodian’s divine monster. More specifically, their phonic gain where it’s being generated through singing. 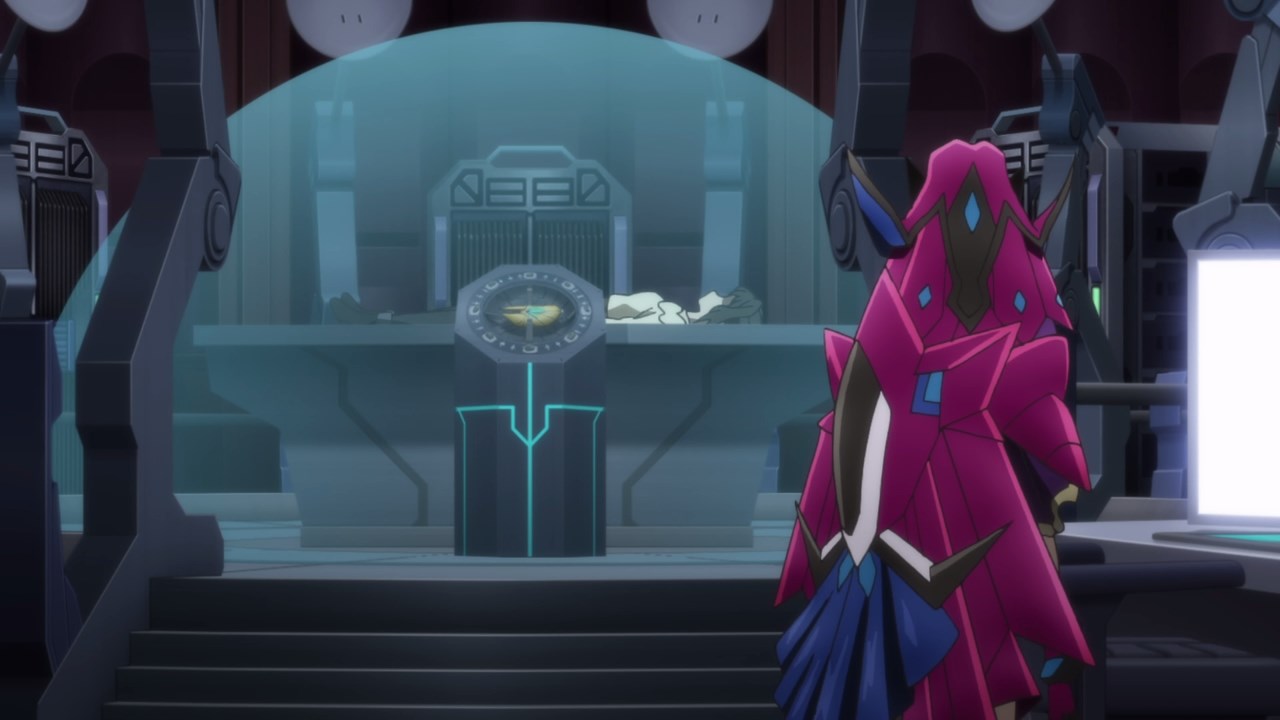 Oh, and Carol needed their phonic gain to power up the Chateau du Tifauges so that it could activate its secret weapon to destroy the manifestation of Annunaki.

Now while it’s a crazy plan, it’s impossible for 5 Symphogear users to combine their powers to activate the Chateau’s weapon since Hibiki Tachibana is currently out of commission. Once more, the only thing that worries me is Fudou Kazanari interfering their plans to rescue Miku Kohinata. 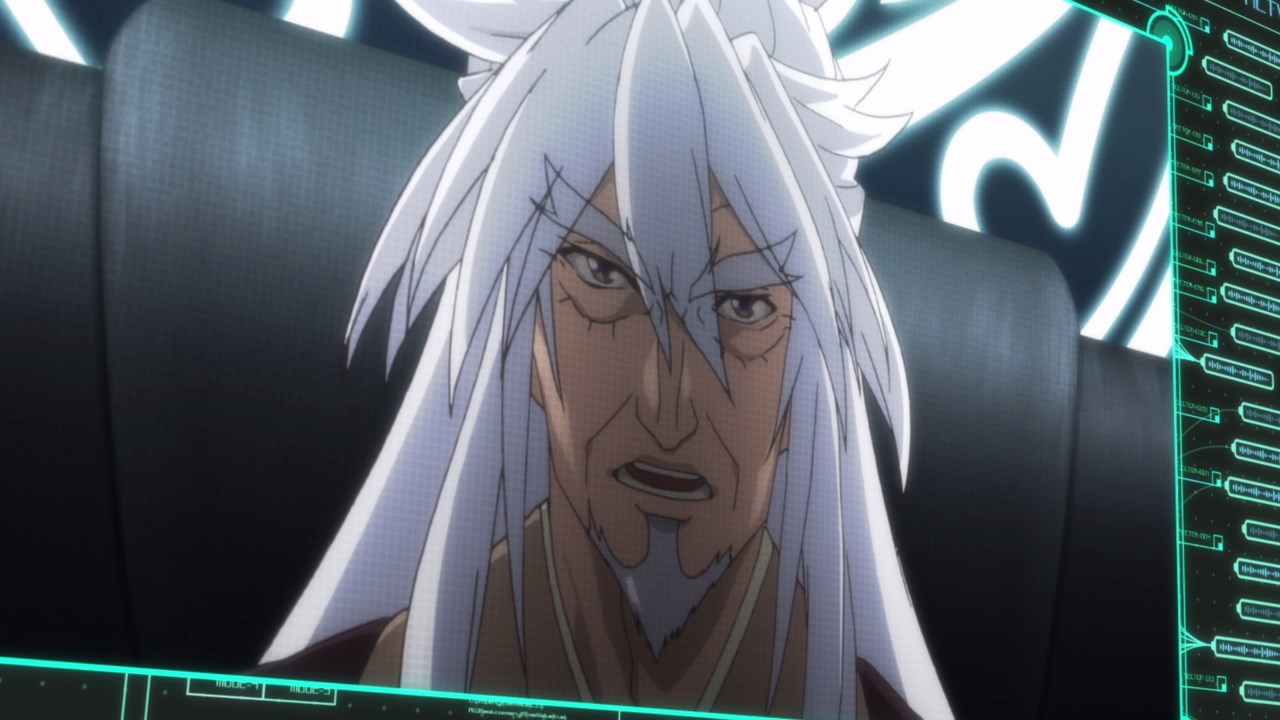 But speaking of Fudou Kazanari, he’s very angry towards Noble Red for failing yet again to stop the intruder and activate the Bracelet of Shem-ha in its complete state.

You know what Fudou, why you step outside and handle those things with your own hands instead of ordering those remnants to do your bidding! Man, I’m disappointed that Fudou didn’t assert dominance on this episode. 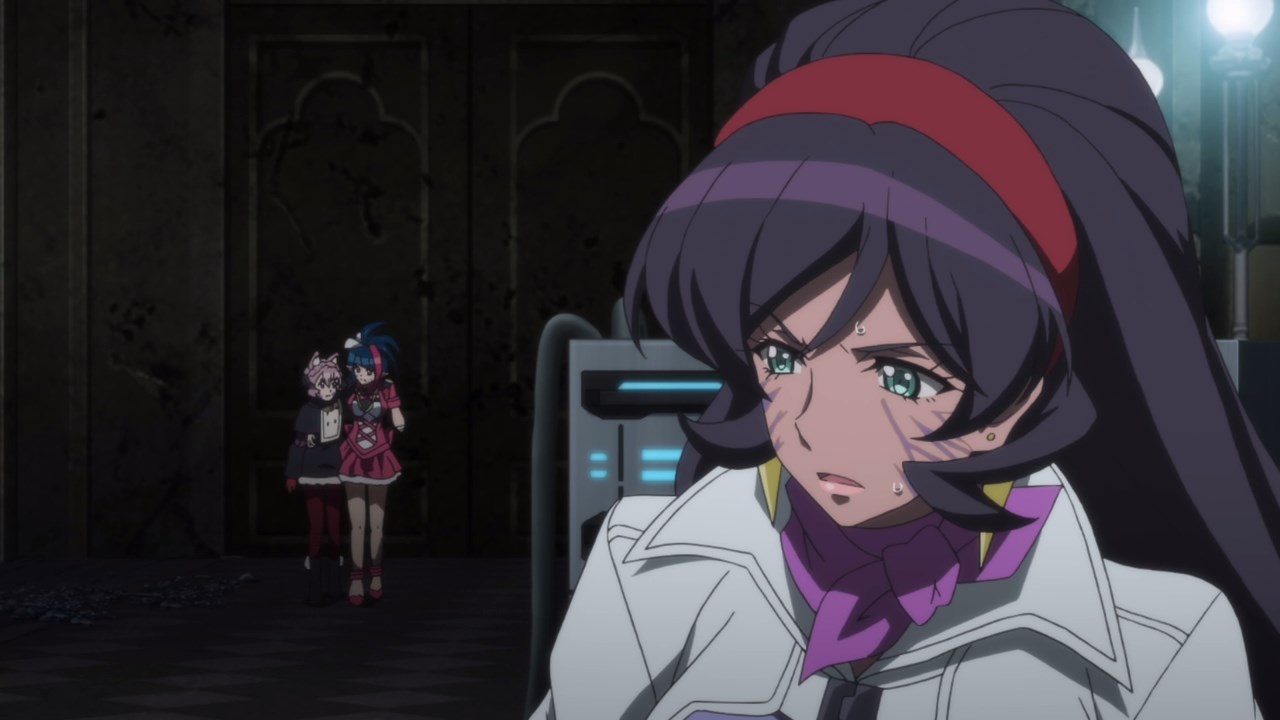 In any case, Noble Red will have to follow Fudou’s orders but you know what, Vanessa and the rest are stuck between a rock and a hard place.

C’mon, you got Fudou in which he’ll dispose them and there’s no way the Symphogear users would shake their hands and call a truce, especially Millaarc when she killed thousands of people back in Episode 2.

Now let’s move onto the next scene as the Symphogear users have arrived at the Chateau du Tifauges. Of course, there’s a risk that generating phonic gain through songs might not work, but Tsubasa Kazanari and the rest will do it anyway. 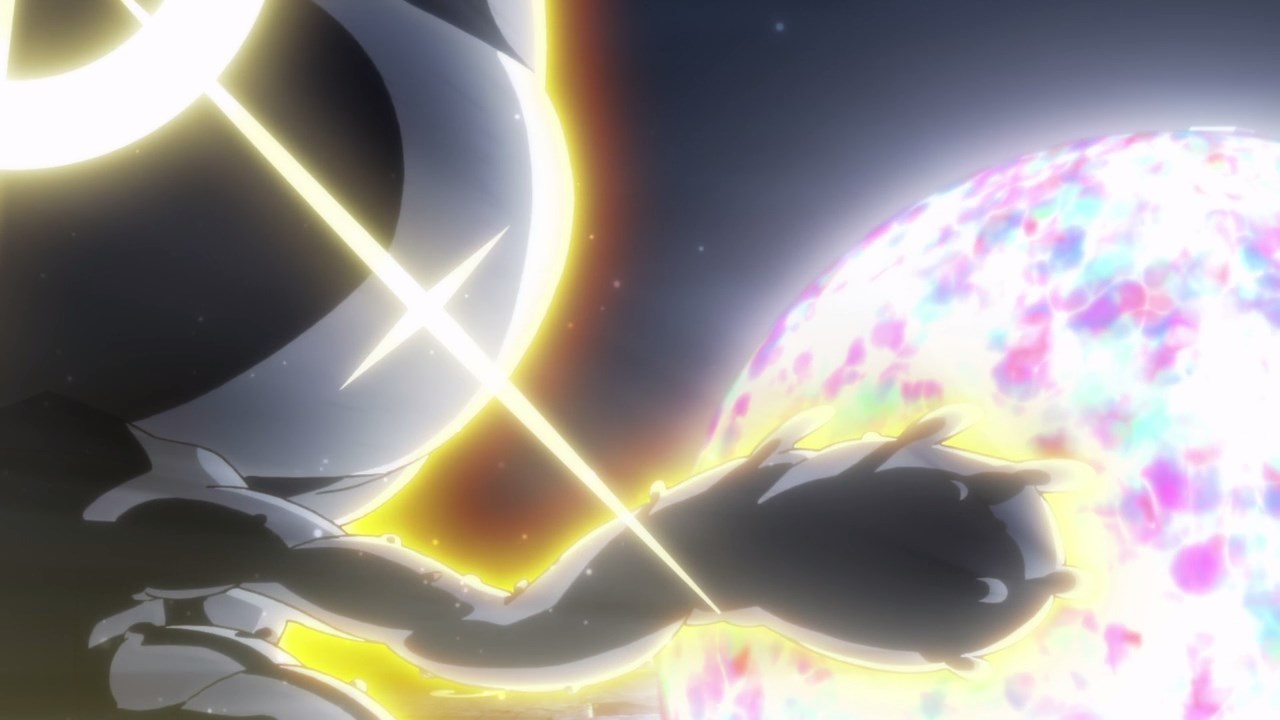 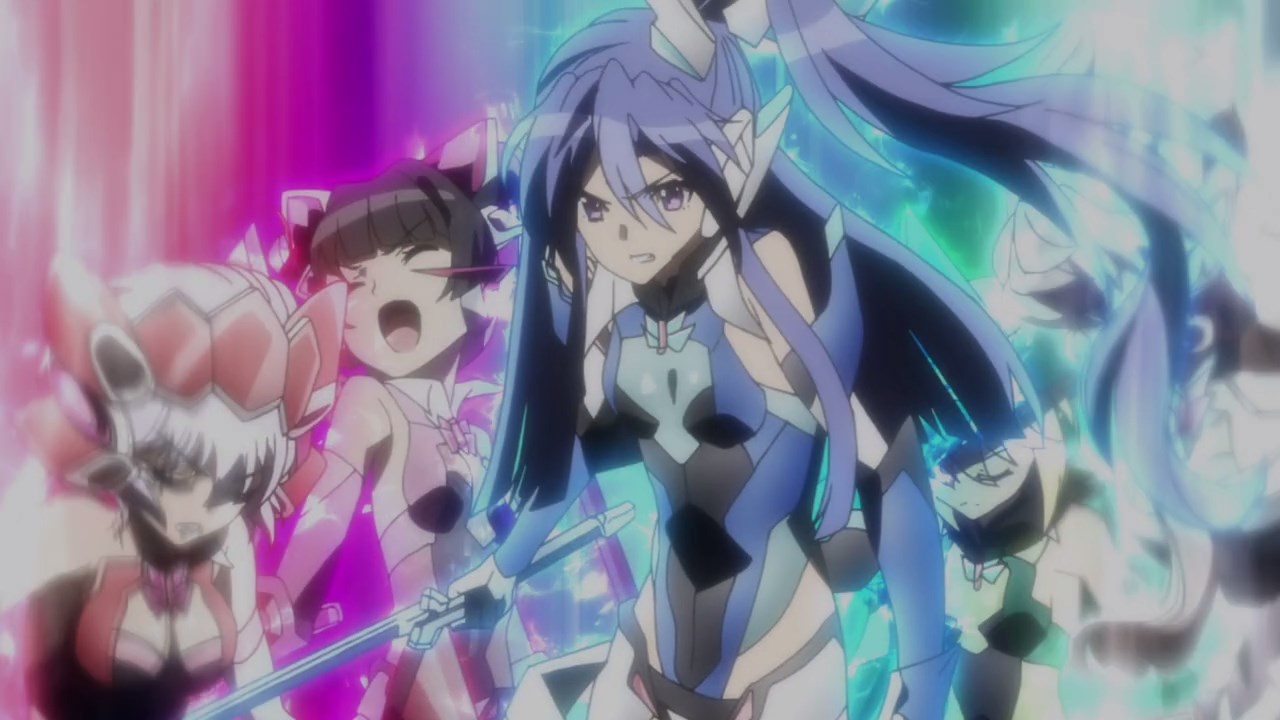 Then again, I think they might not generate enough phonic gain to activate the Chateau’s final weapon. Worst of all, they might die just like Kanade Amou as they’re singing their swan songs at this point. If only Hibiki was here… 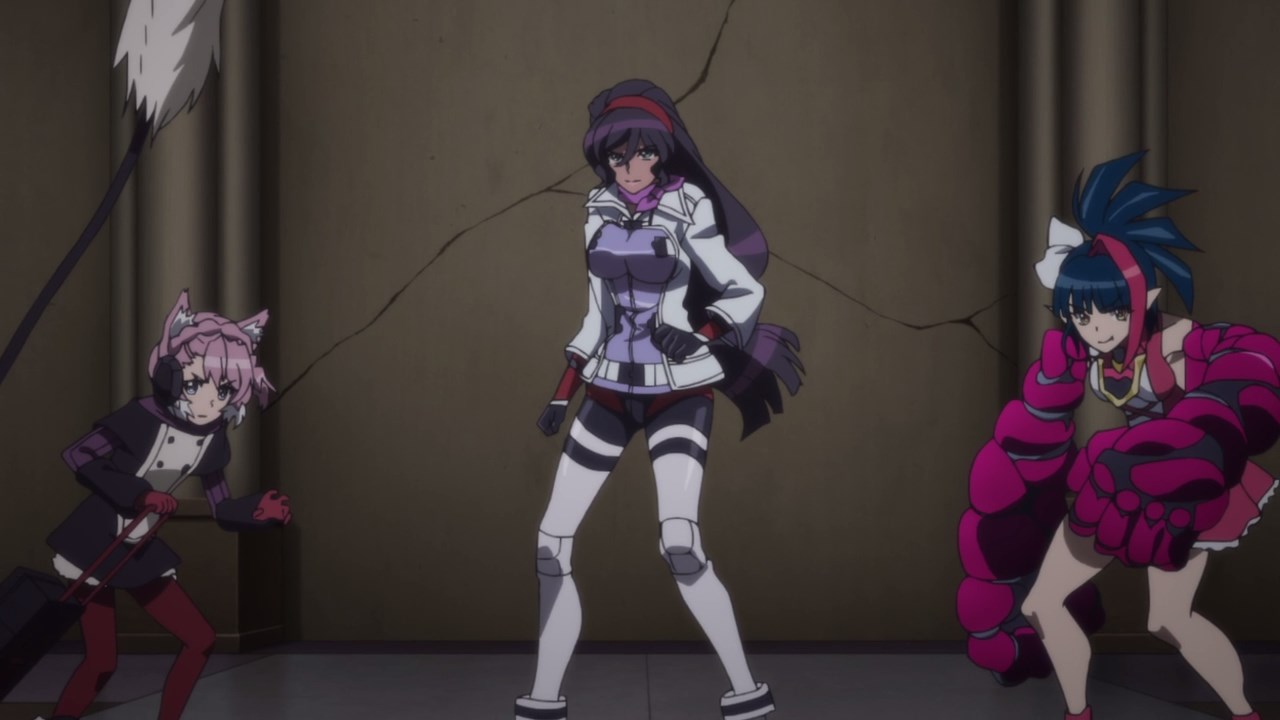 Back inside the Chateau, Noble Red has returned and this time, Vanessa Diodati and her fellow remnants will use their secret weapon. 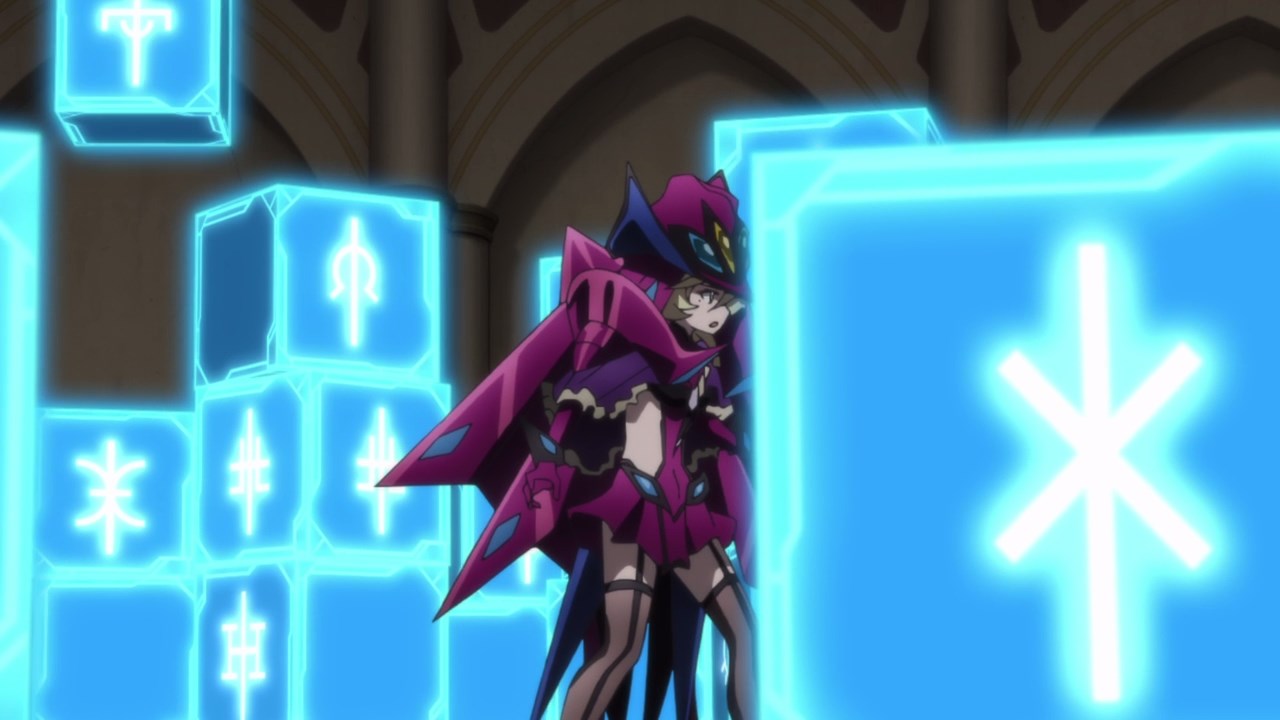 That’s right, it’s the Labyrinth of Daedalus and they’re gonna trap Carol Malus Dienheim until she’s destroyed from the inside. 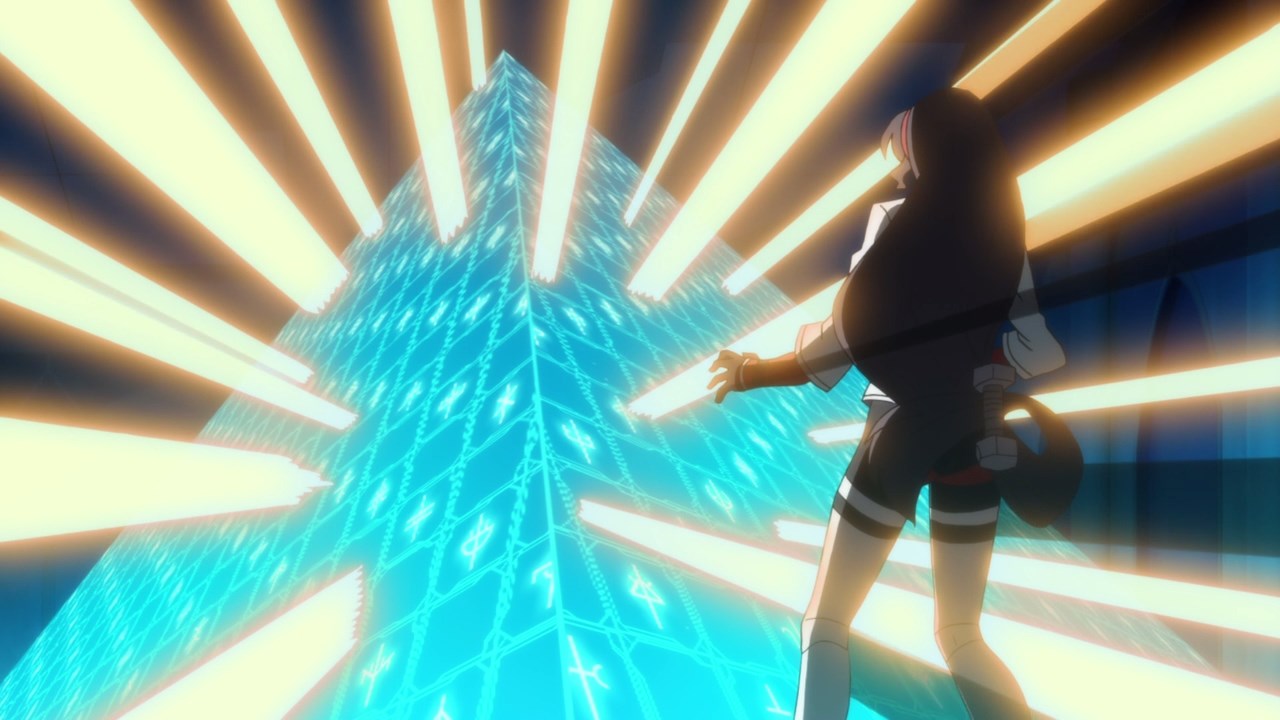 Unfortunately, Vanessa and the rest couldn’t trap Carol with their powerful attack as she uses her god-like powers to muscle her way out. 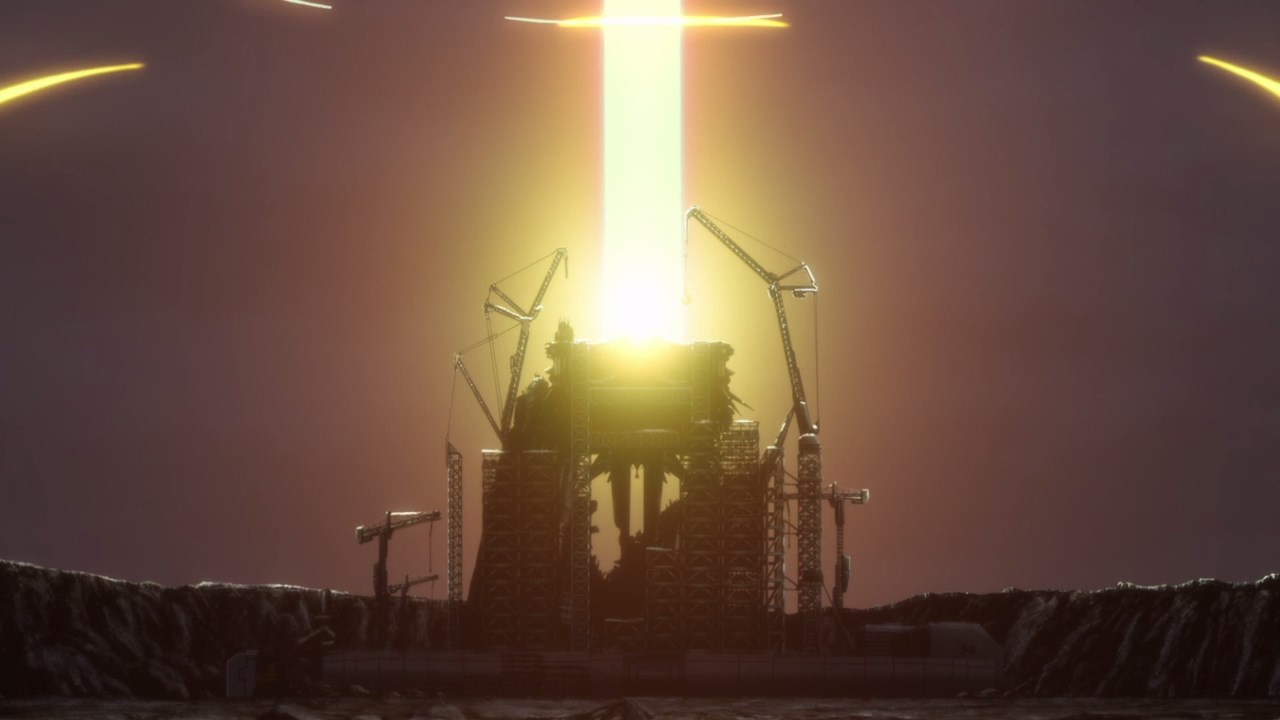 And as you can see, Carol produced a powerful that illuminates the night sky. Well, looks like Noble Red couldn’t beat Carol Malus Dienheim after all. 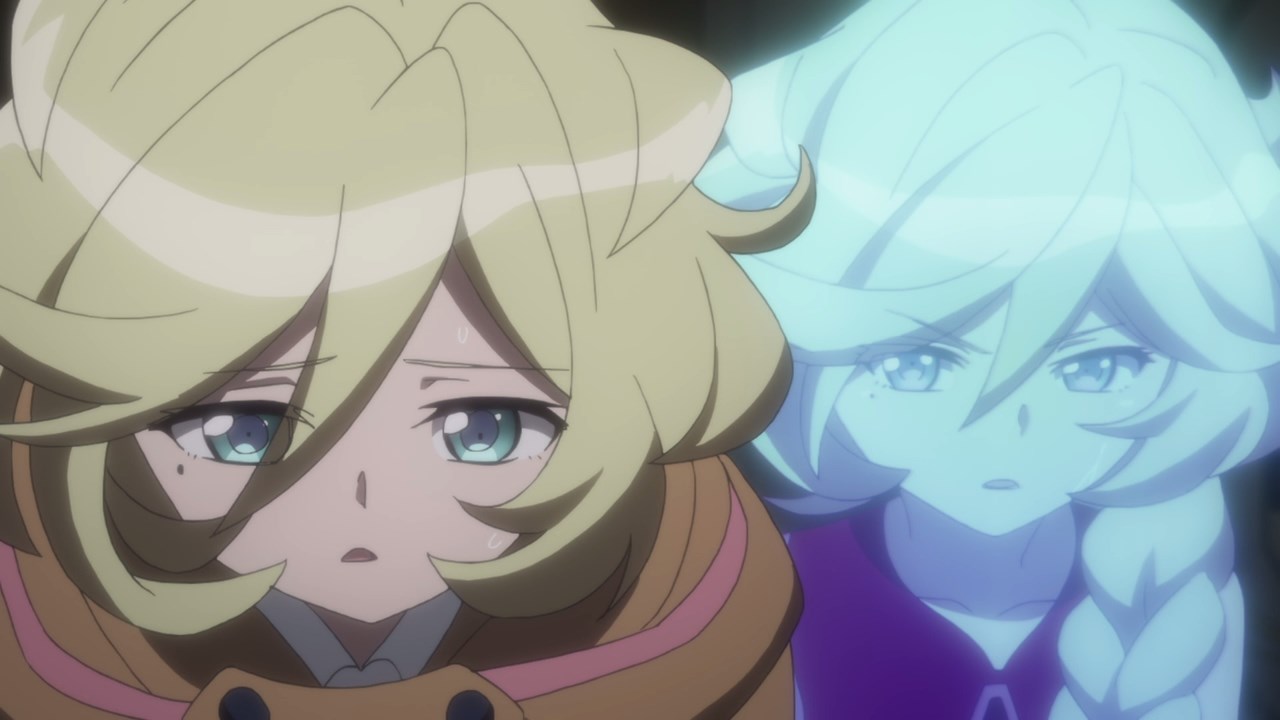 However, Carol used too much of her powers that she lost her Faust Robe and now she’s being reduced as a spirit, which means that Elfnein is doomed now that there’s nothing to protect herself from Noble Red. 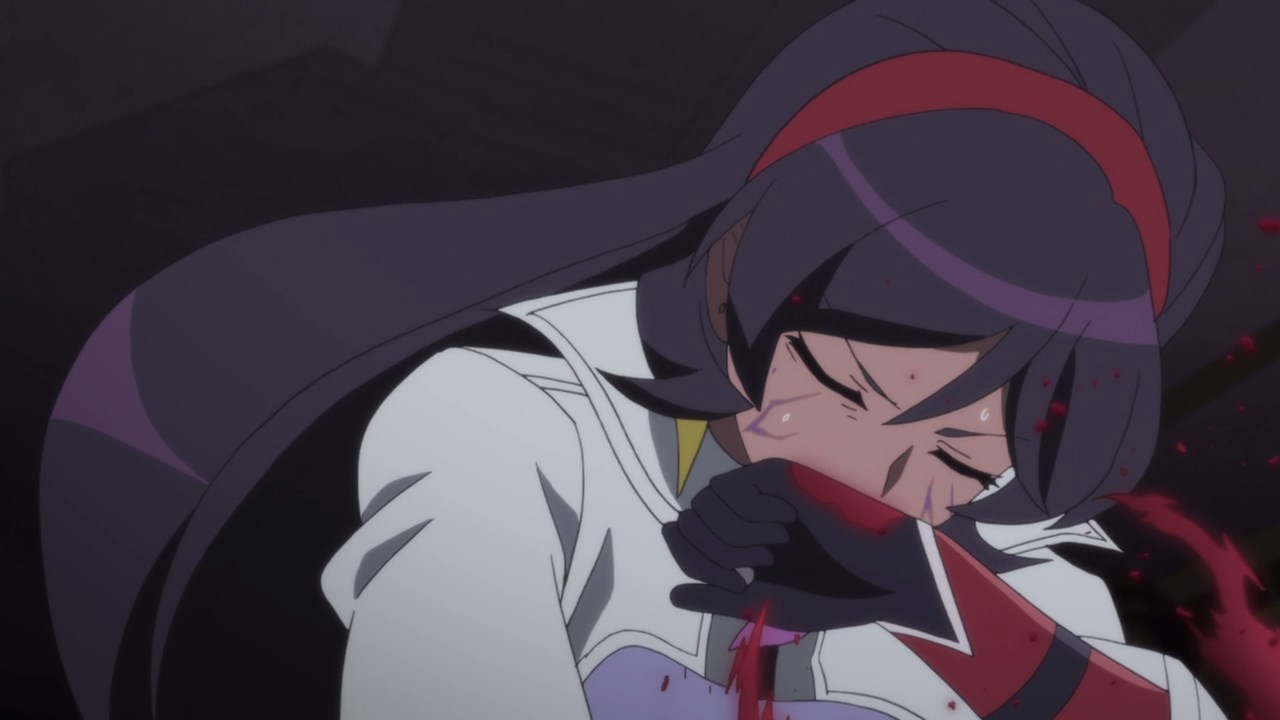 But in a twist of fate, Vanessa Diodati and her fellow remnants are coughing blood, meaning that they can’t kill Elfnein when their bodies are not feeling well. What’s going on here? 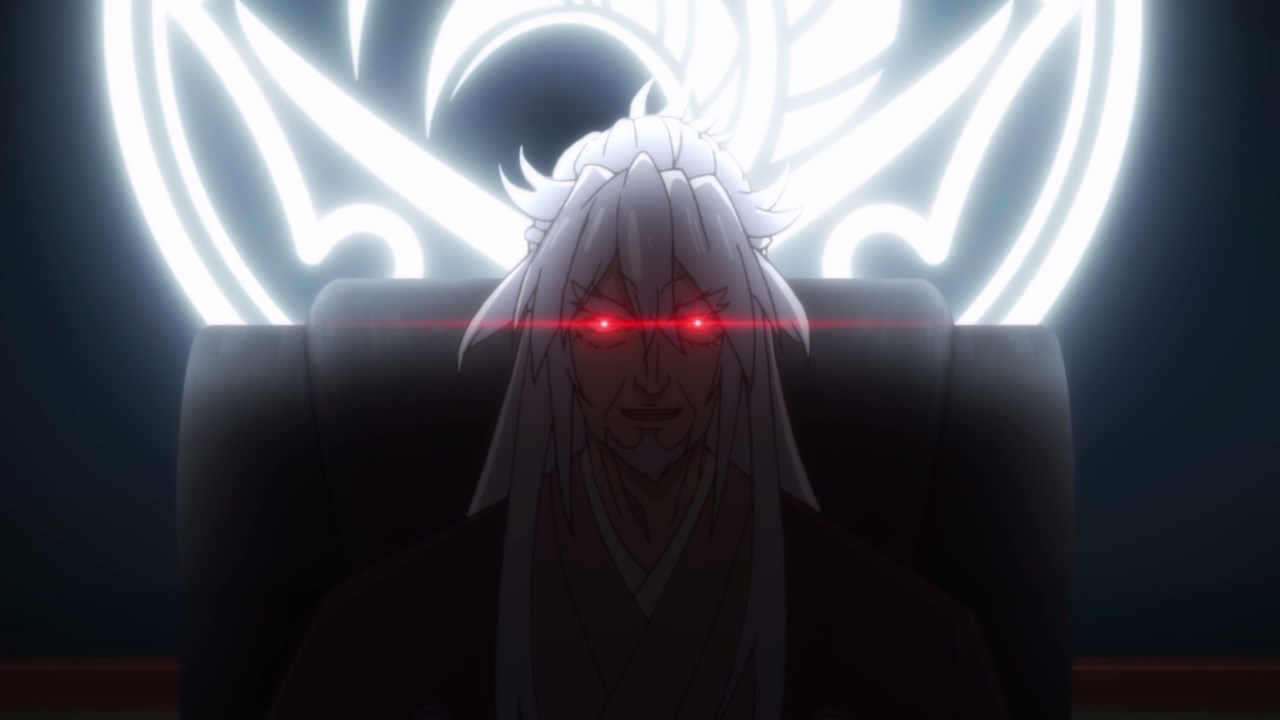 Well it turns out, Fudou Kazanari put poison on those blood packs he gave to Noble Red. This means that he considers those Bavarian Illuminati as expendables, but you know it already that Fudou wants to throw them away after failing to give him the powers to make him a god.

Now then, if only Fudou Kazanari would step outside and take those god powers by himself. But then again, he’ll just stay inside his office until there’s an opportunity to take the Bracelet of Shem-ha once the dust has settled! 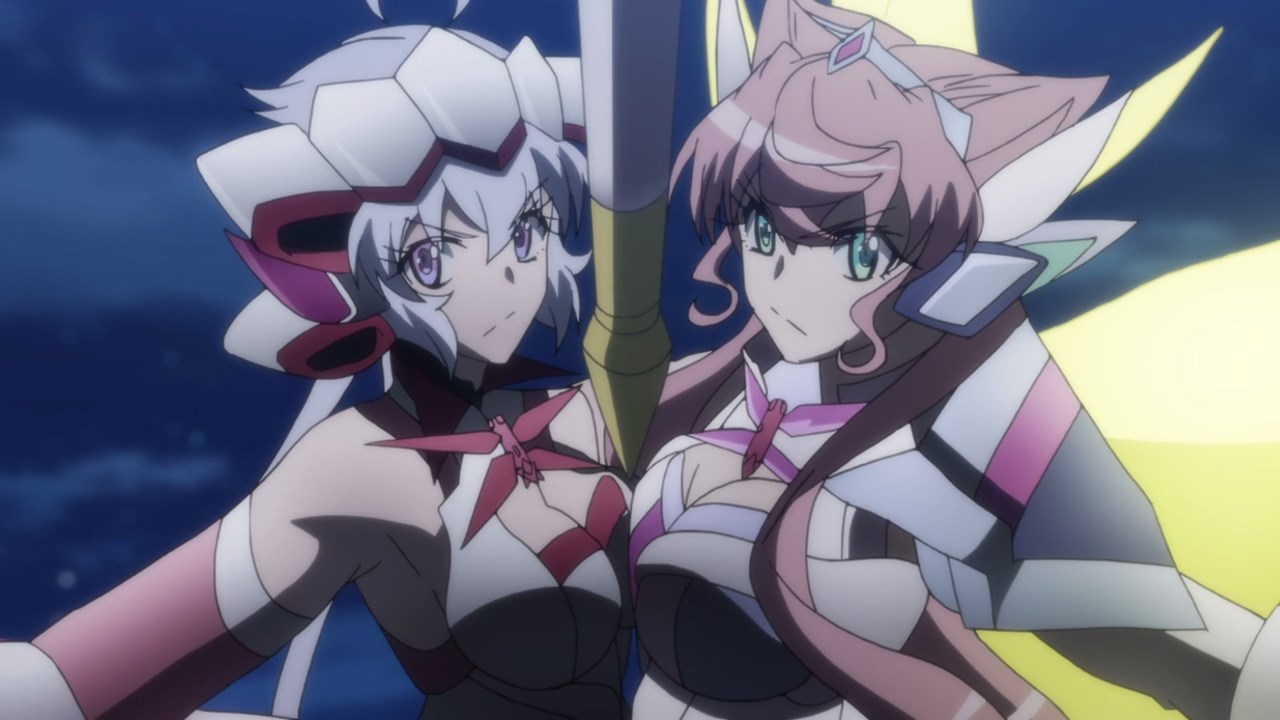 And now, it’s time for the Symphogear users to fight against the monster since they failed to generate enough phonic gain to activate the weapon inside the Chateau du Tifauges.

But you know what, even though they failed at their objective, there’s plenty of action from these girl like this one for example, where Chris Yukine and Maria Cadenzavna Eve made a symmetrical docking…

…and combine their relics to create a powerful laser cannon that’ll create a hole towards Annunaki’s monster. 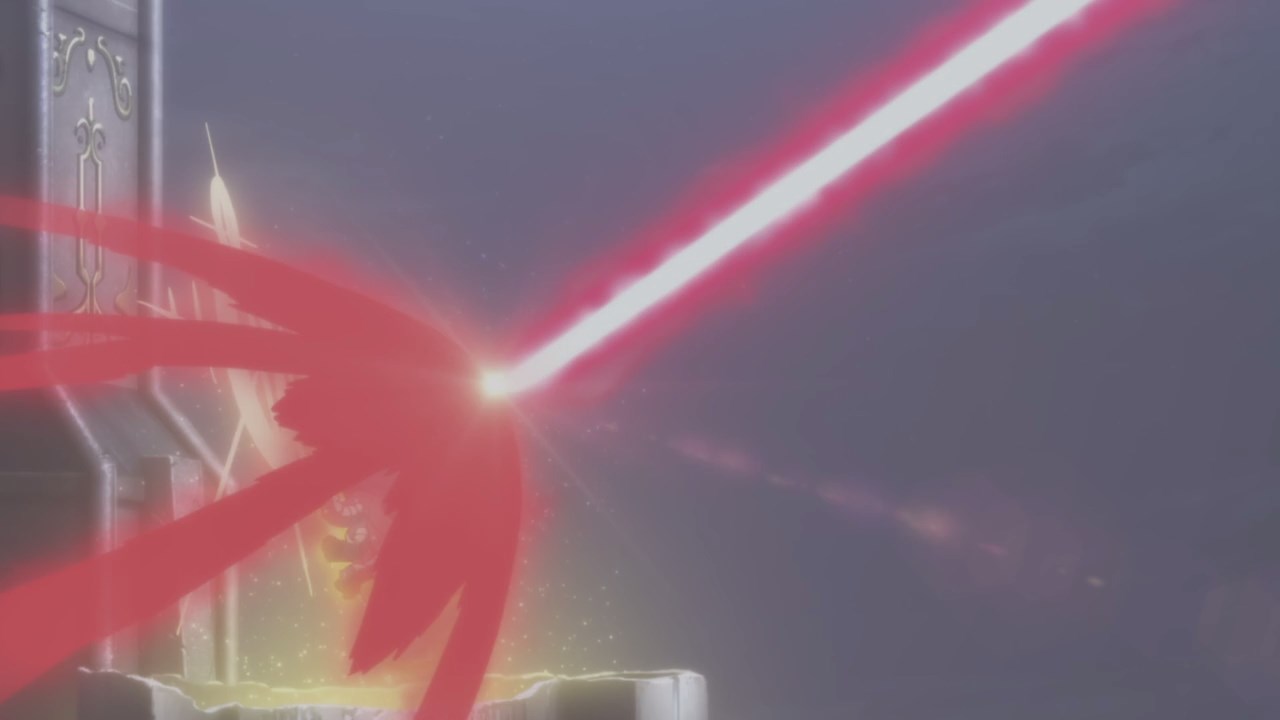 However, it’s not enough to kill this abomination, therefore they need someone who has the power to kill gods. 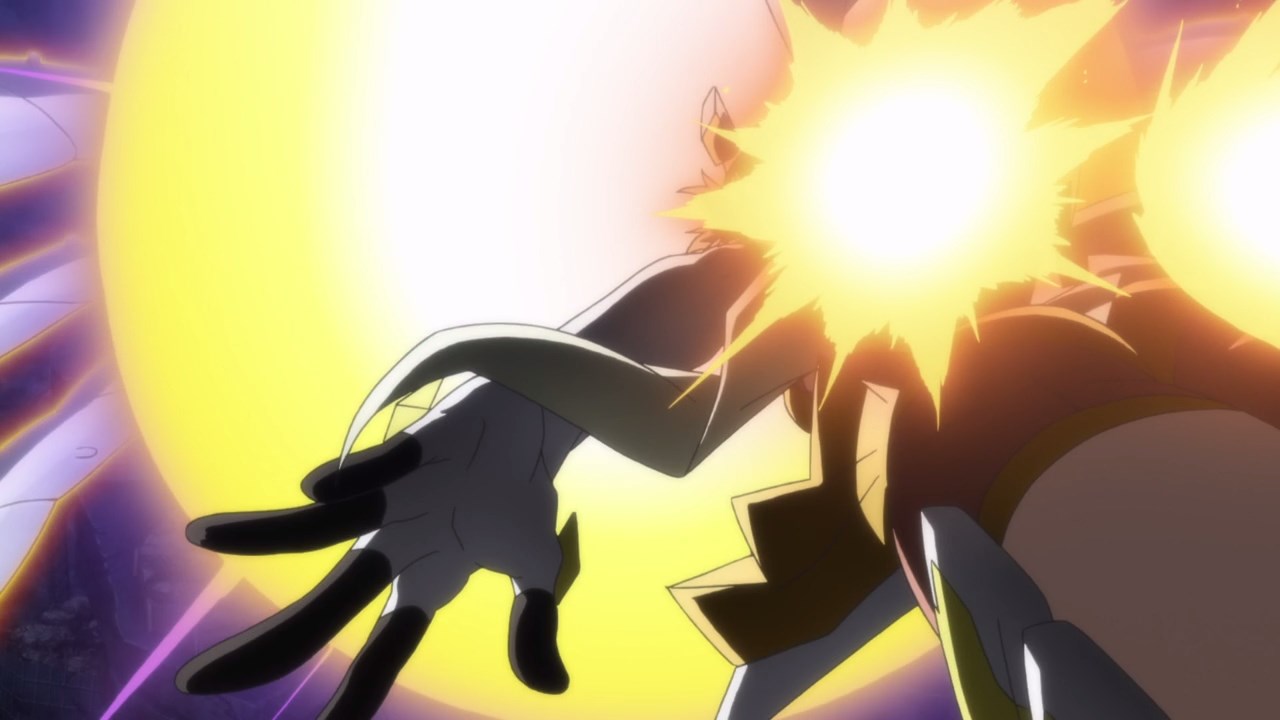 Fortunately for Genjuro Kazanari and the rest of the Symphogear users, it appears that a certain someone has arrived to pierce the heavens in order to rescue her friend. 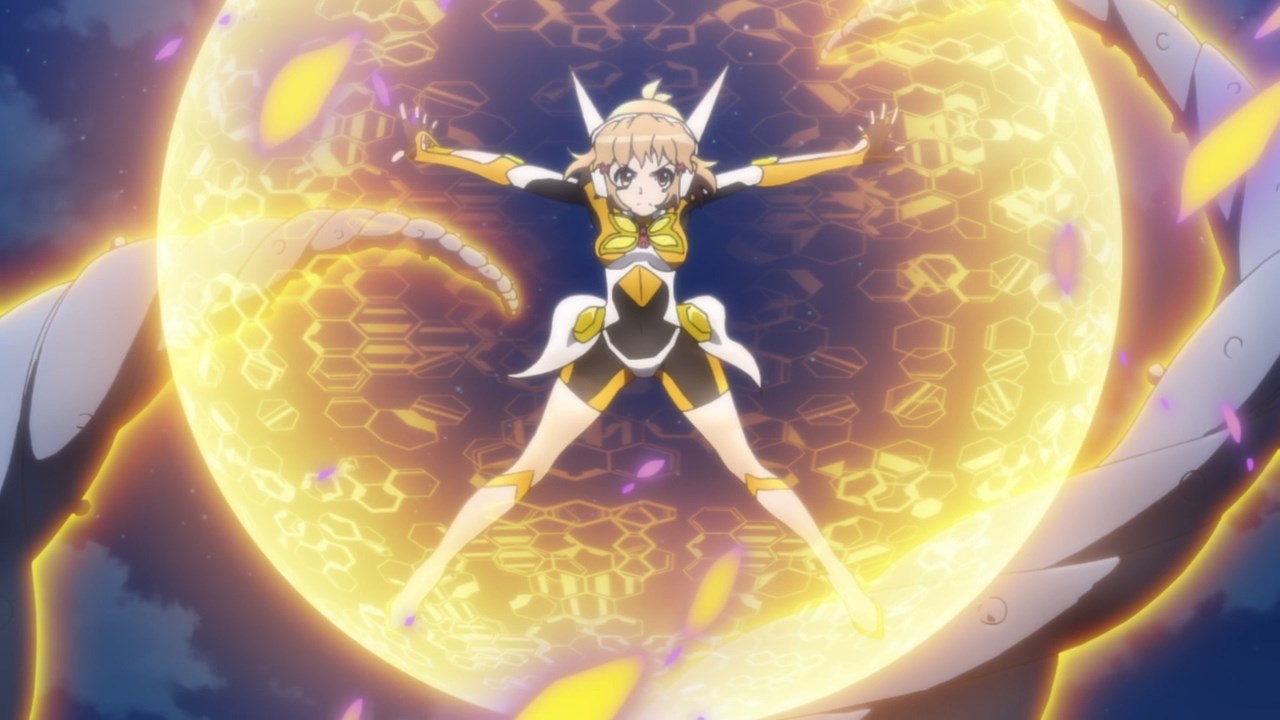 That’s right, it’s Hibiki Tachibana as she’s arrived use the power of her Gungnir to destroy the Custodian’s abomination and save Miku Kohinata. 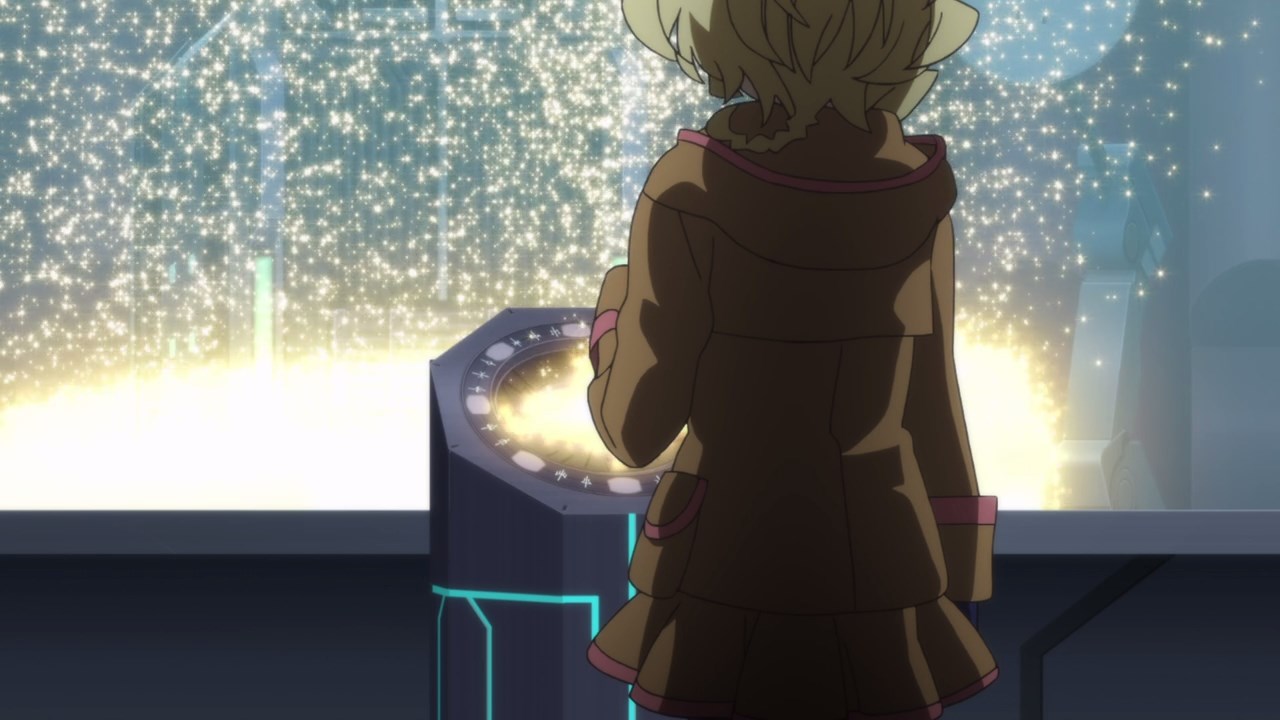 But speaking of Kohinata, it appears that her body has disappeared. Don’t tell me that the Custodian’s abomination just absorbed Miku? 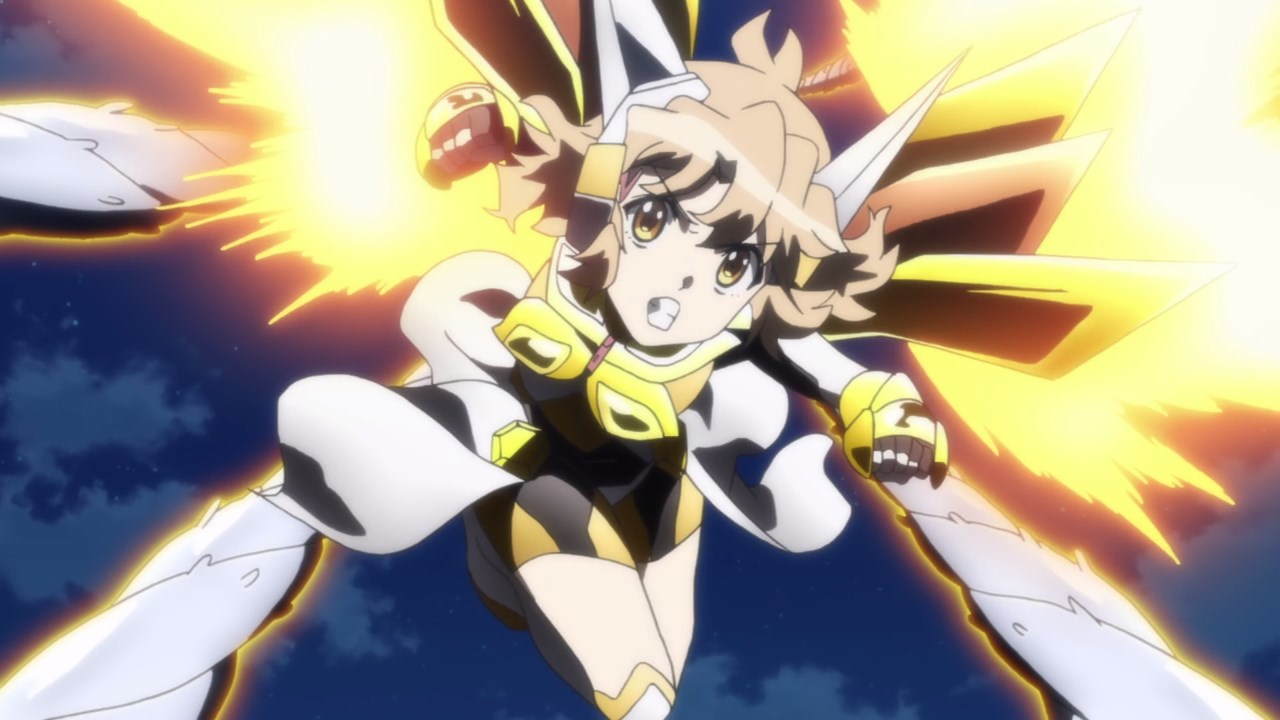 Now let’s go back to Hibiki where she’s about to finish Annunaki’s monster with her fists. 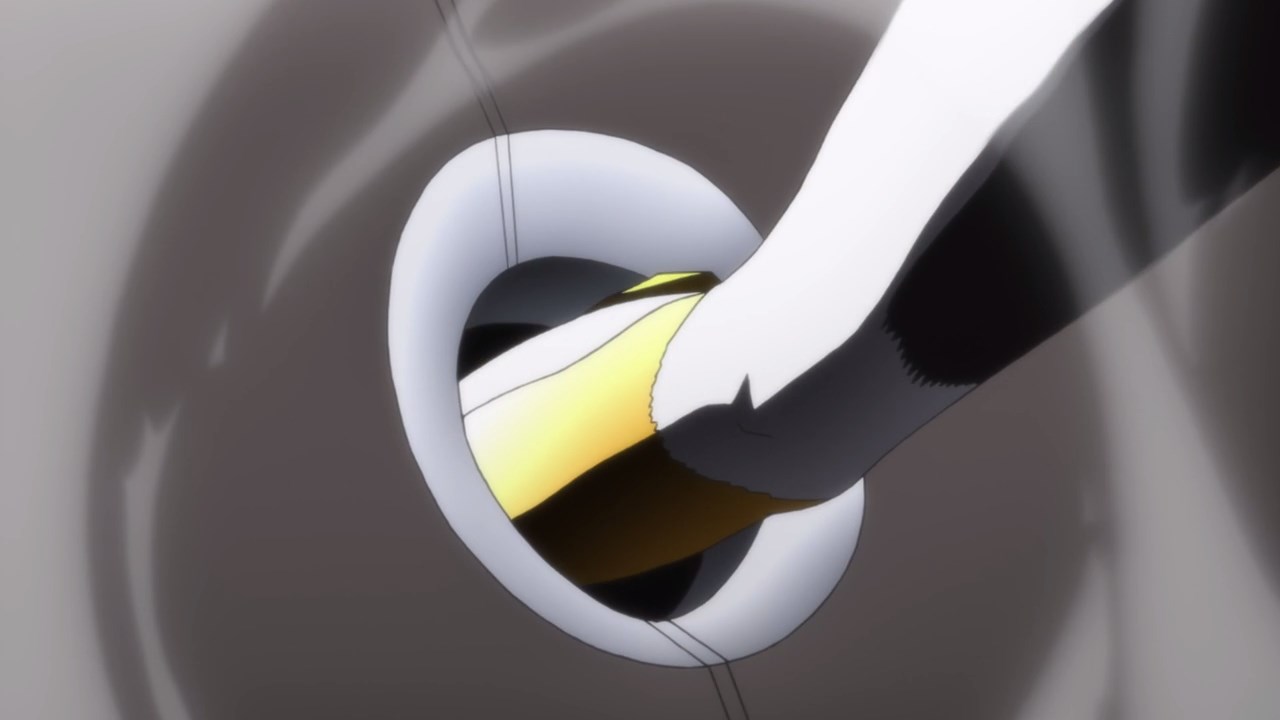 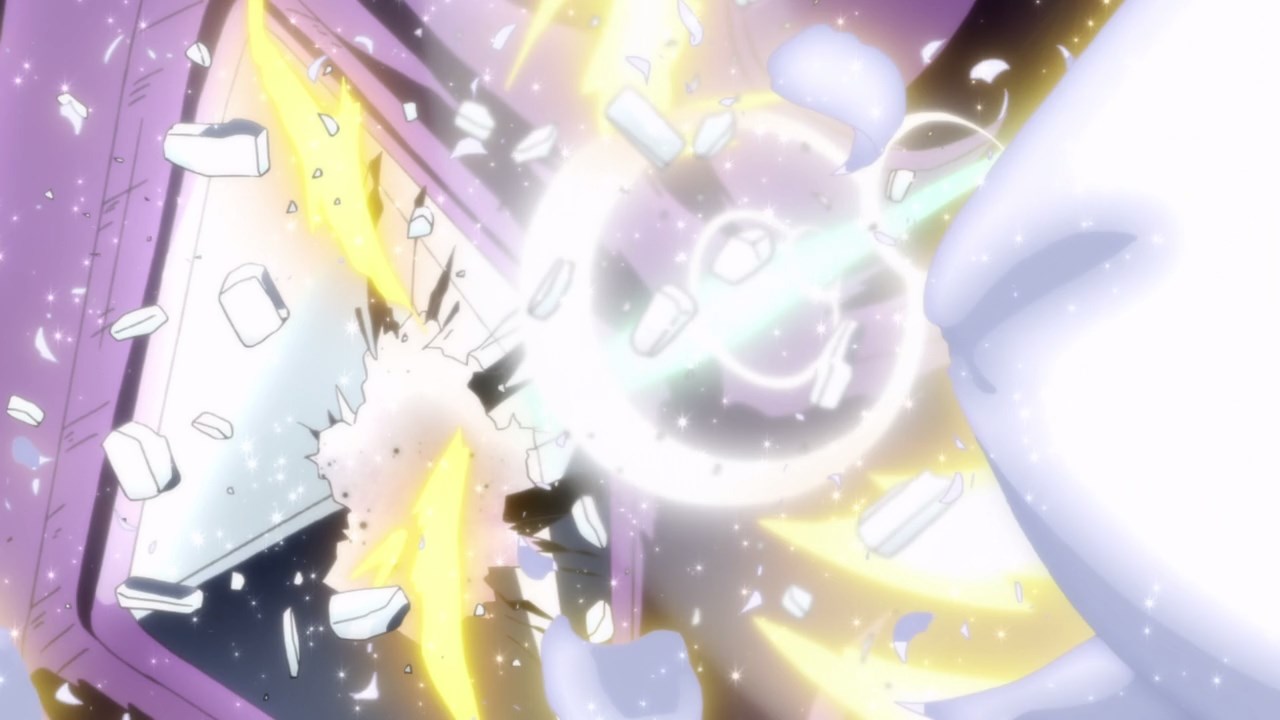 Or rather, Hibiki’s giant-sized Amalgam fists that it can be attached to her body or hand-carry it as seen here where Tachibana punctured a hole in order to get inside this abomination. 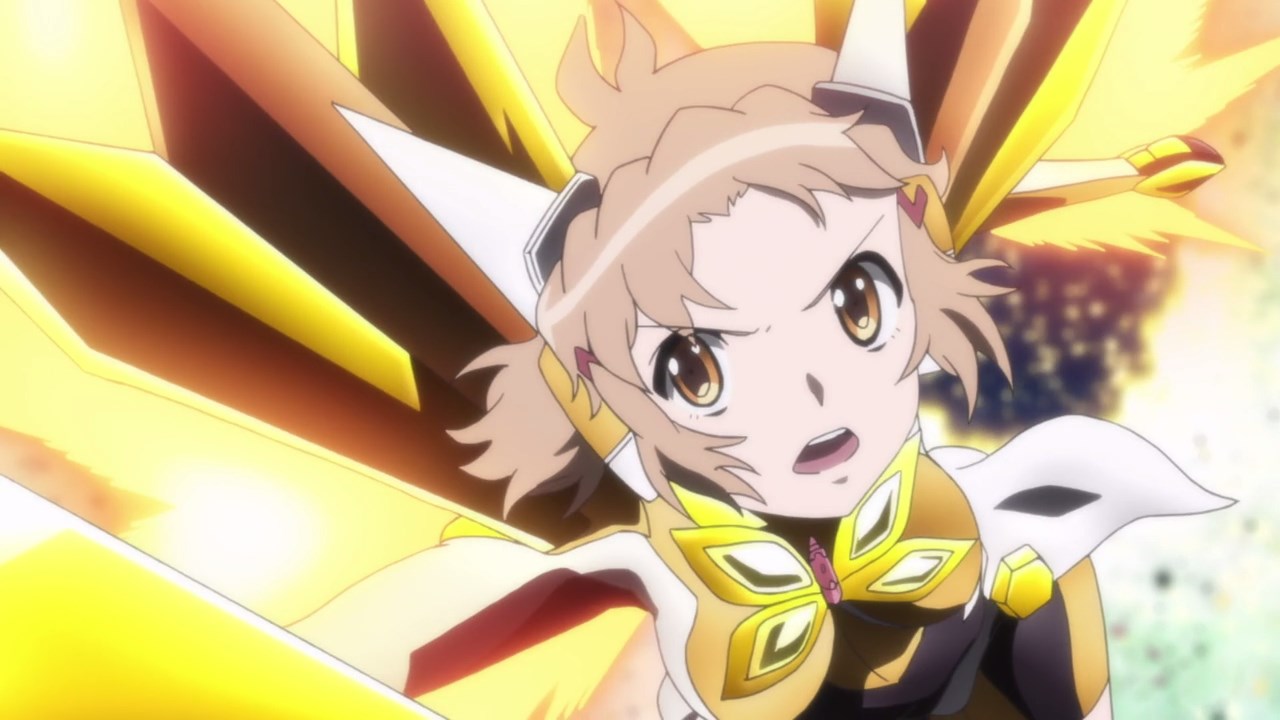 Unfortunately for Hibiki Tachibana, it appears that she saw something horrible upon going inside the belly of the beast.

Turns out the the Custodian’s monster took Miku Kohinata and forcibly wields both Shenshou Jing and the Bracelet of Shem-ha. Oh boy, it’s Symphogear G all over again, but it’s made even worse now that Miku has the Custodian’s relic!

Anyways, tune in next time where Hibiki Tachibana tries to rescue Miku Kohinata. Of course, I’m still worried that Fudou Kazanari might interfere because c’mon, he wants to have the power of the Custodians. Then again, Fudou will just sit around inside his office.