Posted on September 8, 2019 by benigmatica 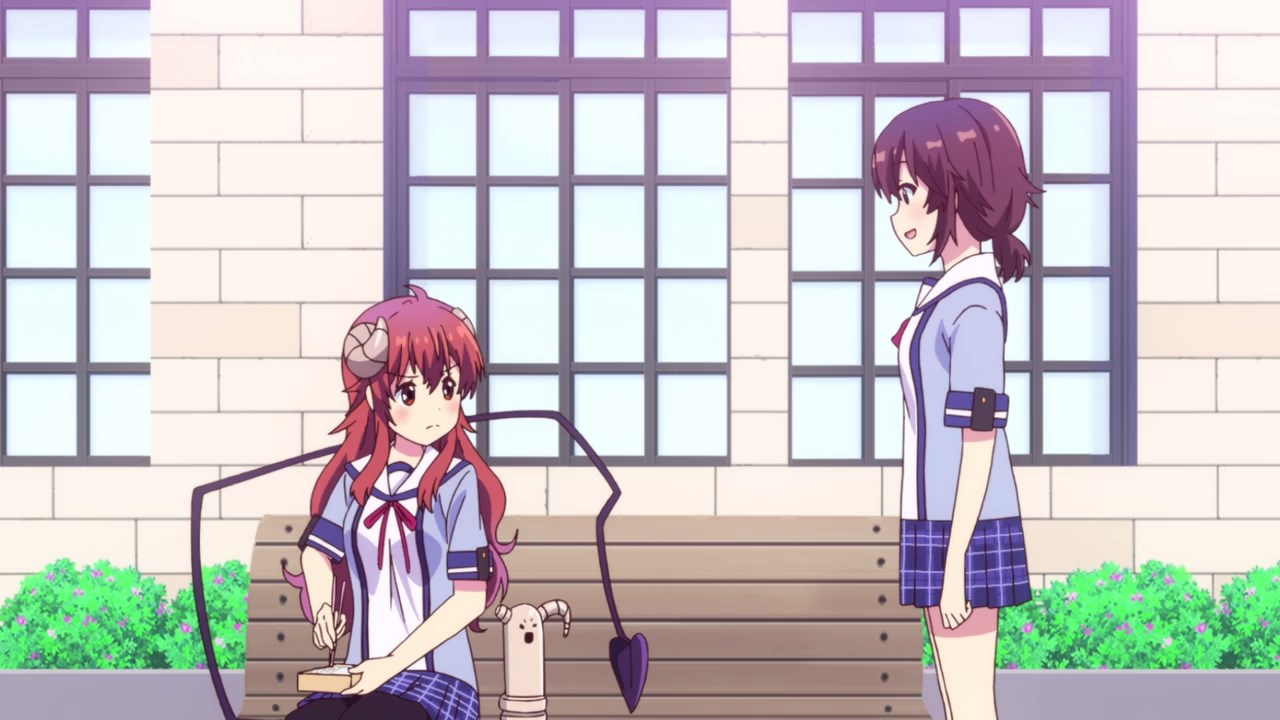 Oh look, it’s Anri Sata where she tells Yuko Yoshida on how to beat a magical girl. Hm, I wonder if Anri will tell something that won’t work on Shamiko? 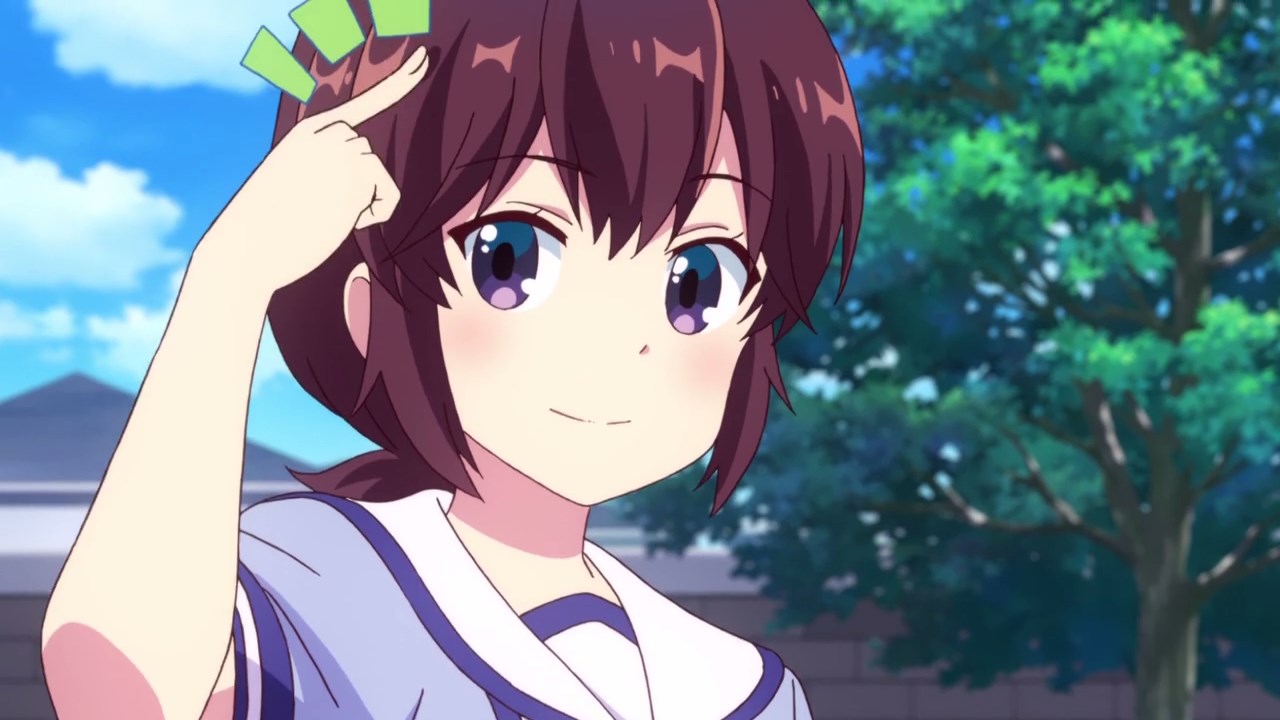 But anyways, Anri told Yuko to use her brains to defeat Momo. I mean, if she can’t beat a magical girl through strength alone, Shamiko will just outwit Momo instead. 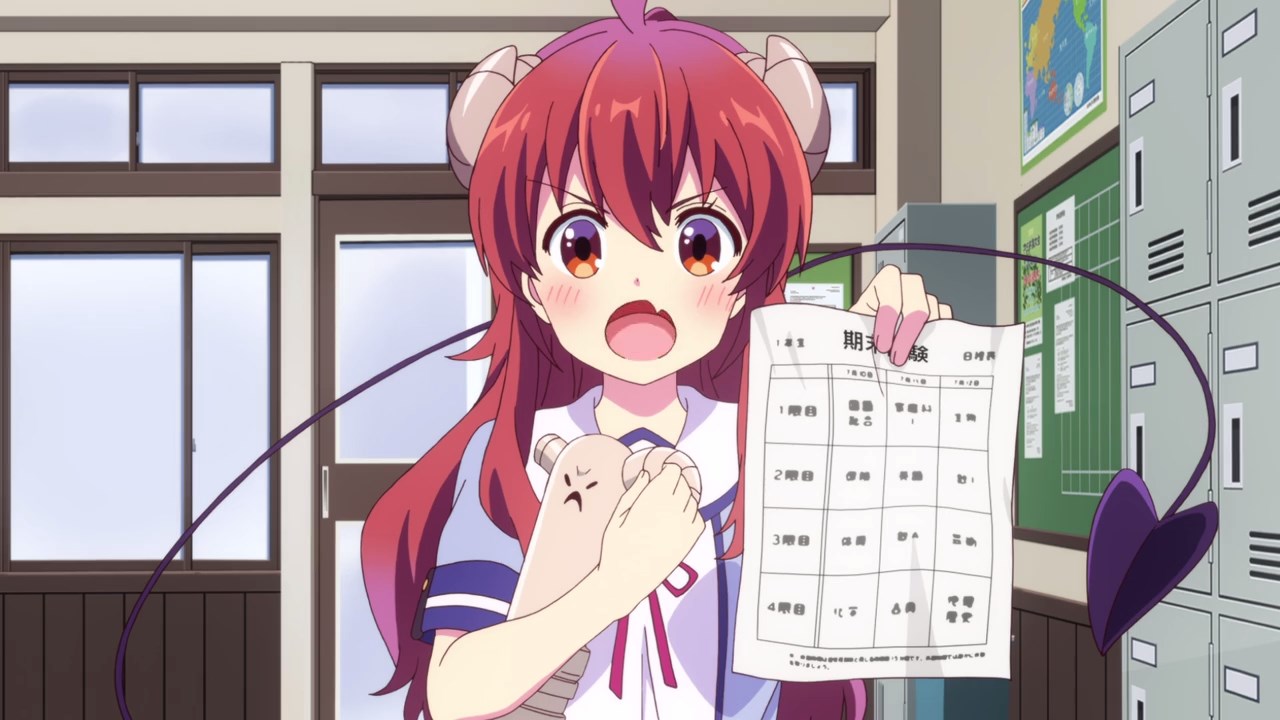 With that said, Yuko took Anri’s advise and challenge Momo to a duel to see who has the best examination scores.

Then again, I doubt that Shamiko is smart because the only one who has the brightest minds is her sister Ryoko. 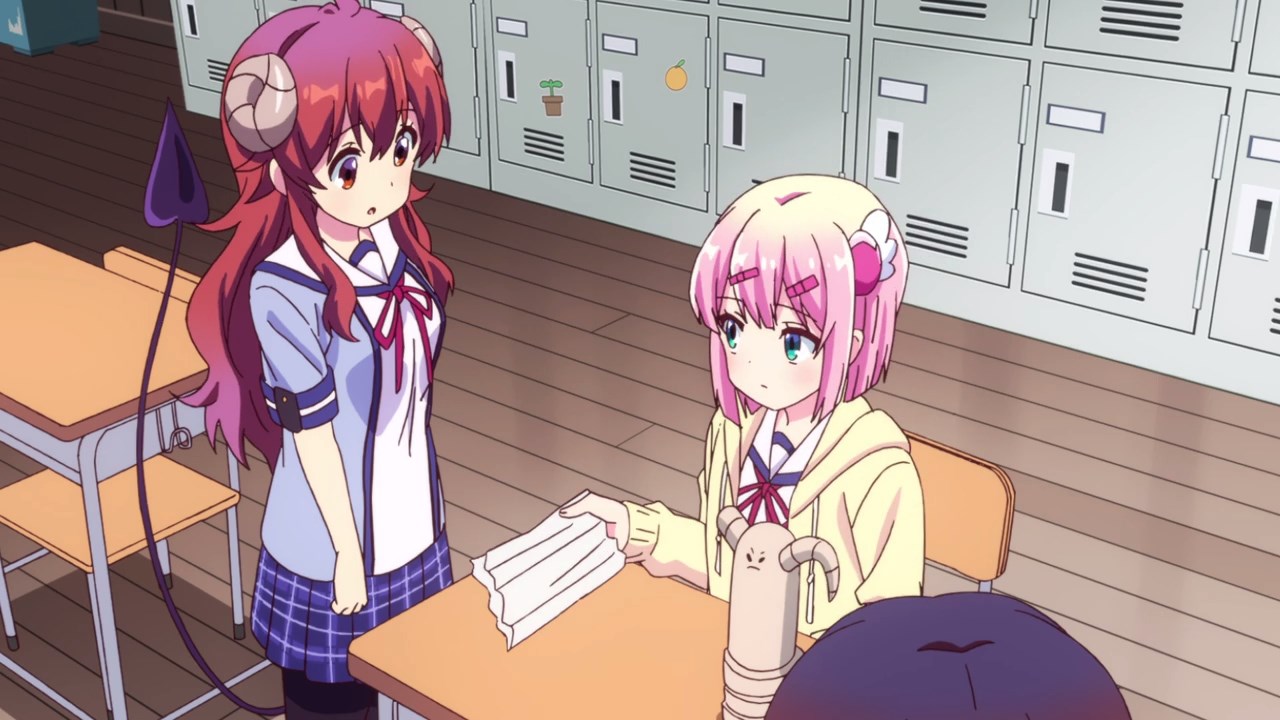 Still, Momo Chiyoda accepts her challenge where she shows off her test scores, although Momo’s test papers are wrinkled. 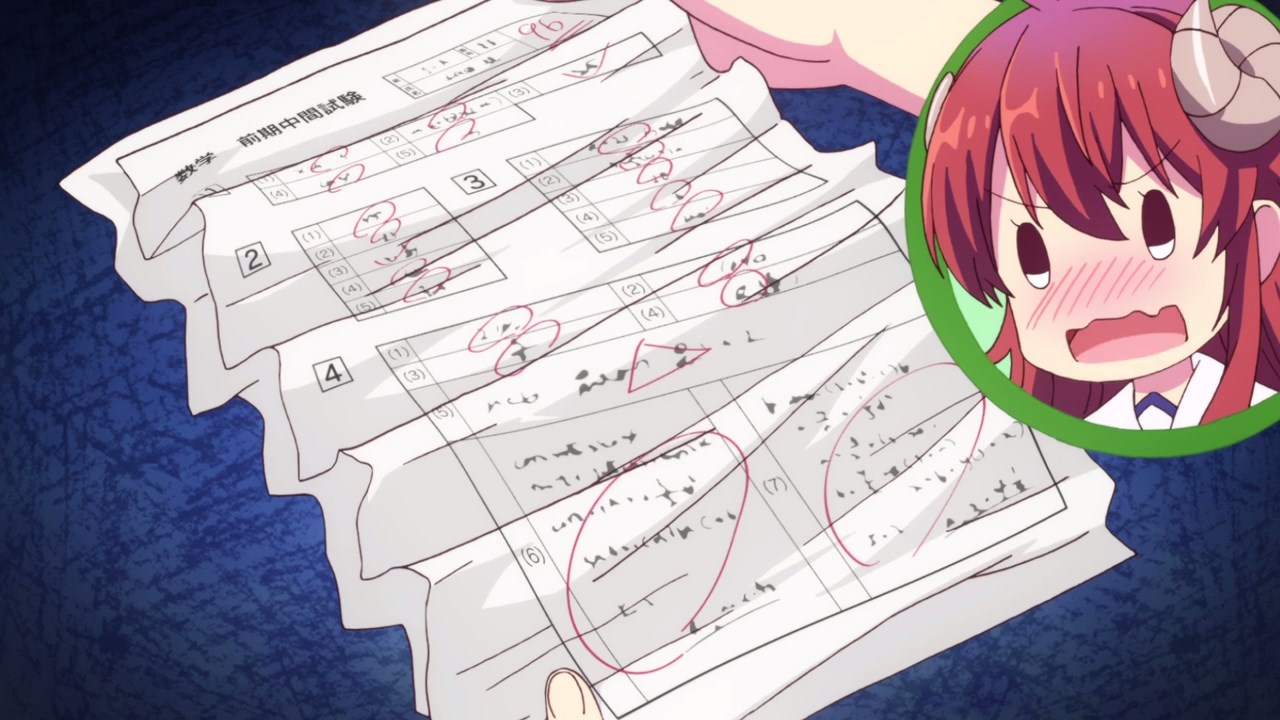 Anyways, turns out that Momo Chiyoda is not only stronger, but also smarter than Yuko Yoshida as she looks at Momo’s midterms exam scores.

Damn, this magical girl got 96 points out of 100 which means that Momo is one of the top students out there. 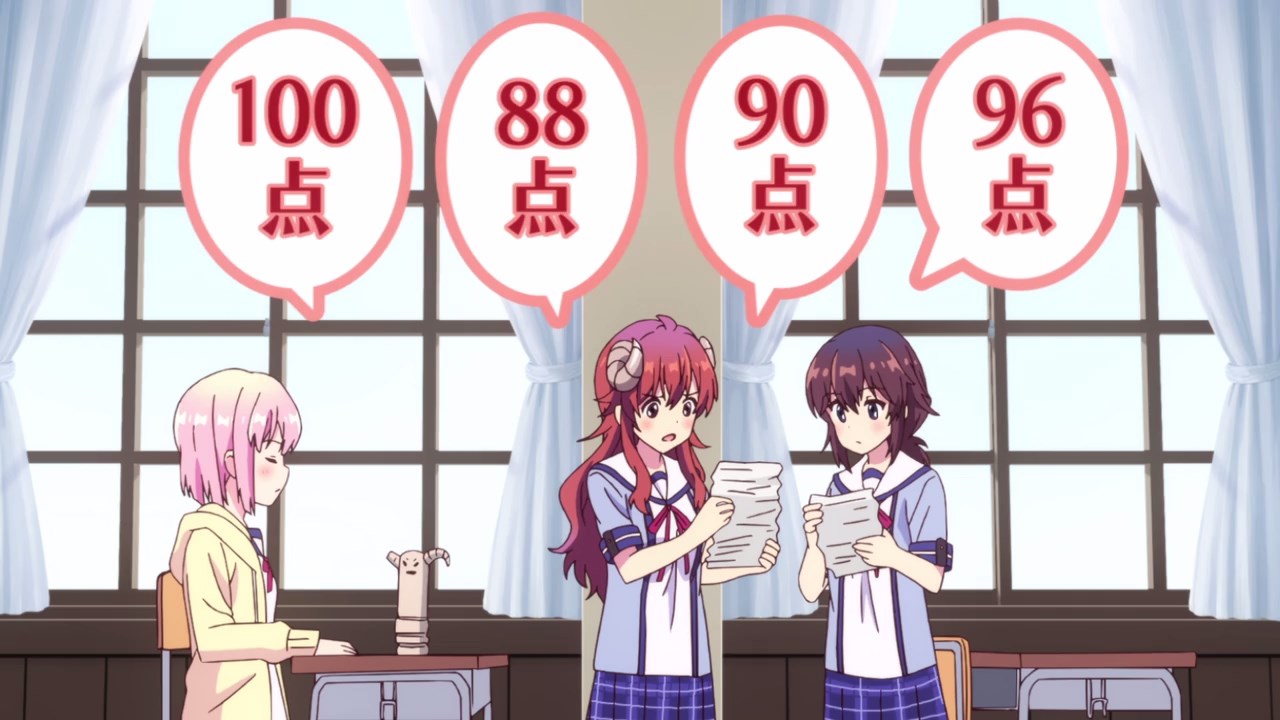 But yeah, Shamiko got an uphill battle against Momo and with the upcoming tests coming up, the pressure of beating a magical girl is intense as Yuko needs to have an almost perfect score. 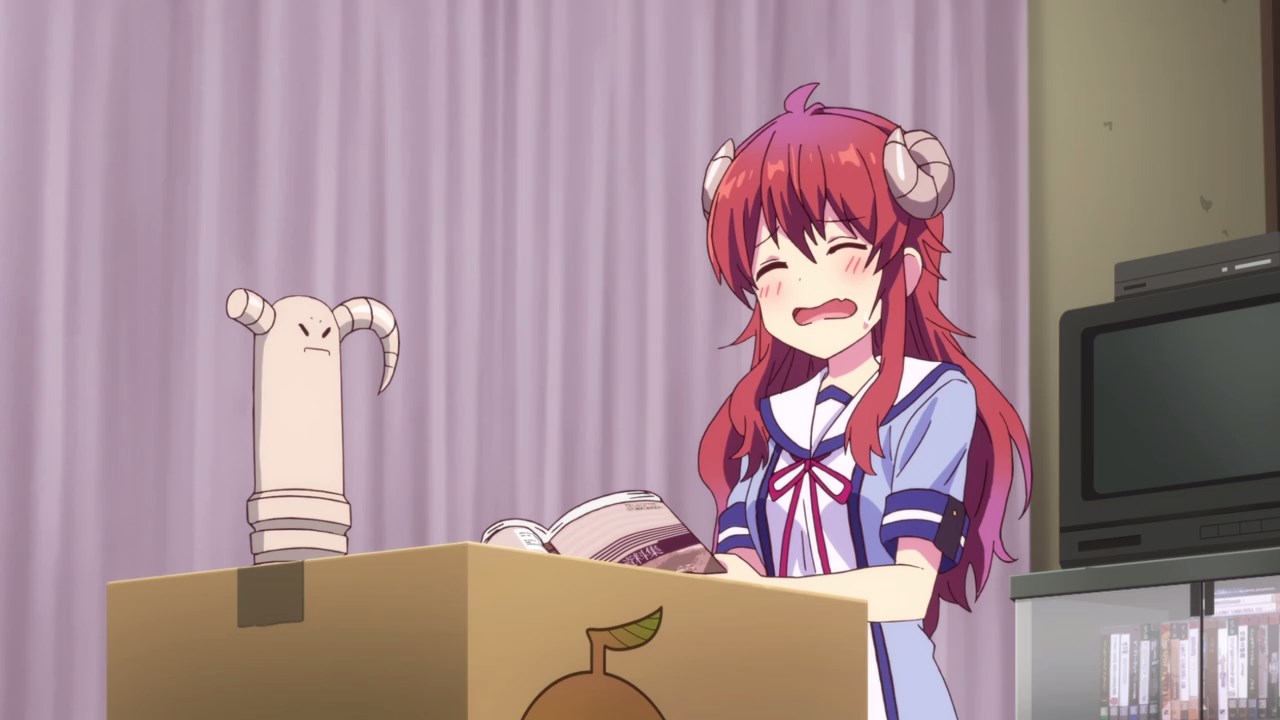 And so, Yuko Yoshida decides to study until the day of the exams. But you know what, Lilith has other plans because why would Shamiko spend her time reading books where this Shadow Mistress can cheat her way to victory. 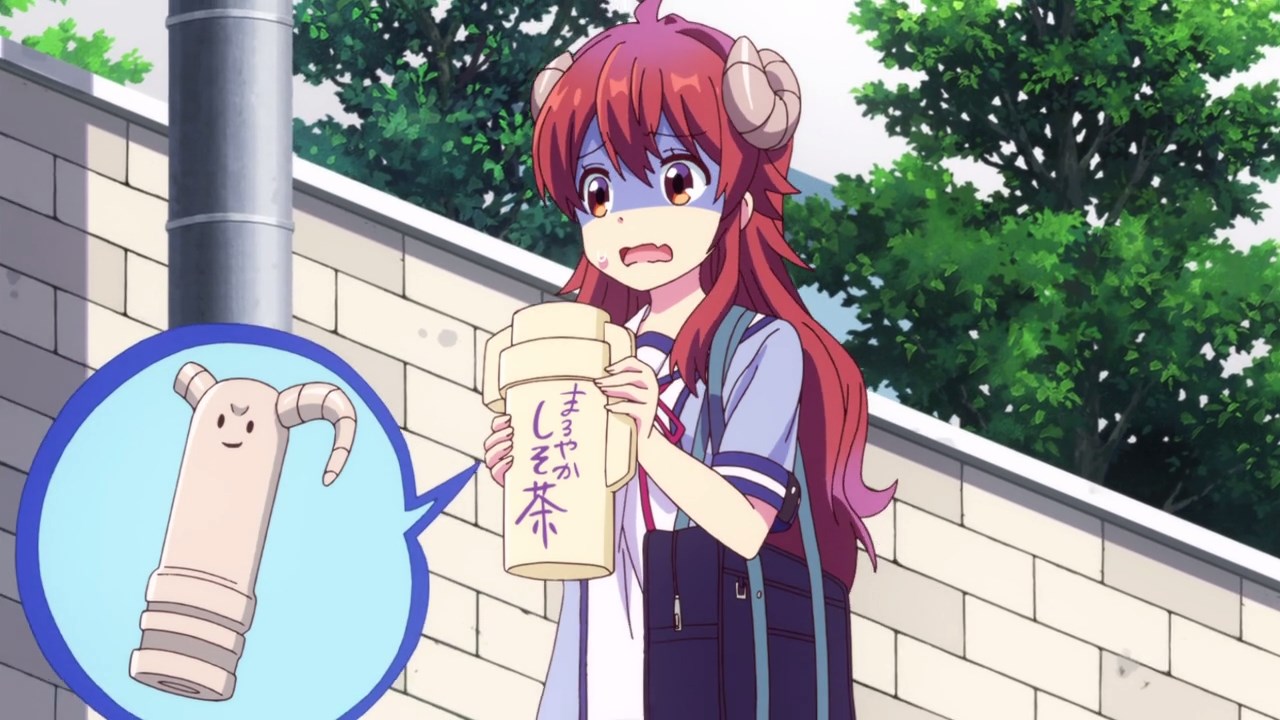 Anyways, Lilith told Shamiko to put her ancestor statue in a thermos so that she would unsuspectedly give answers to the Shadow Mistress during the exams.

Well, I’m not surprised that the Dark Clan would use cheap tricks to get ahead of the competition. 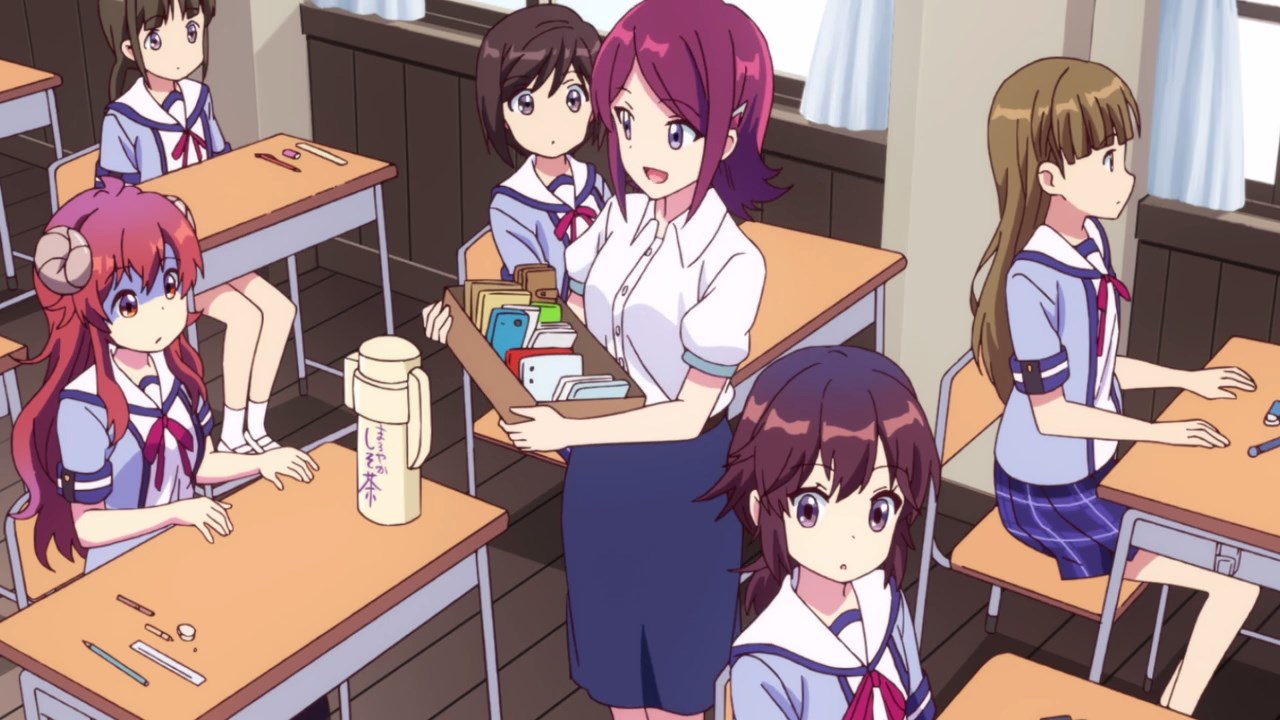 And so, the time has come for Yuko Yoshida to take part in the exams as the teacher asked the students to give up their smartphones.

But wait, Shamiko doesn’t have a phone, meaning that she can’t cheat her way to victory. Then again, she has Lilith at her side so it seems that Yuko might cheat during the exams. 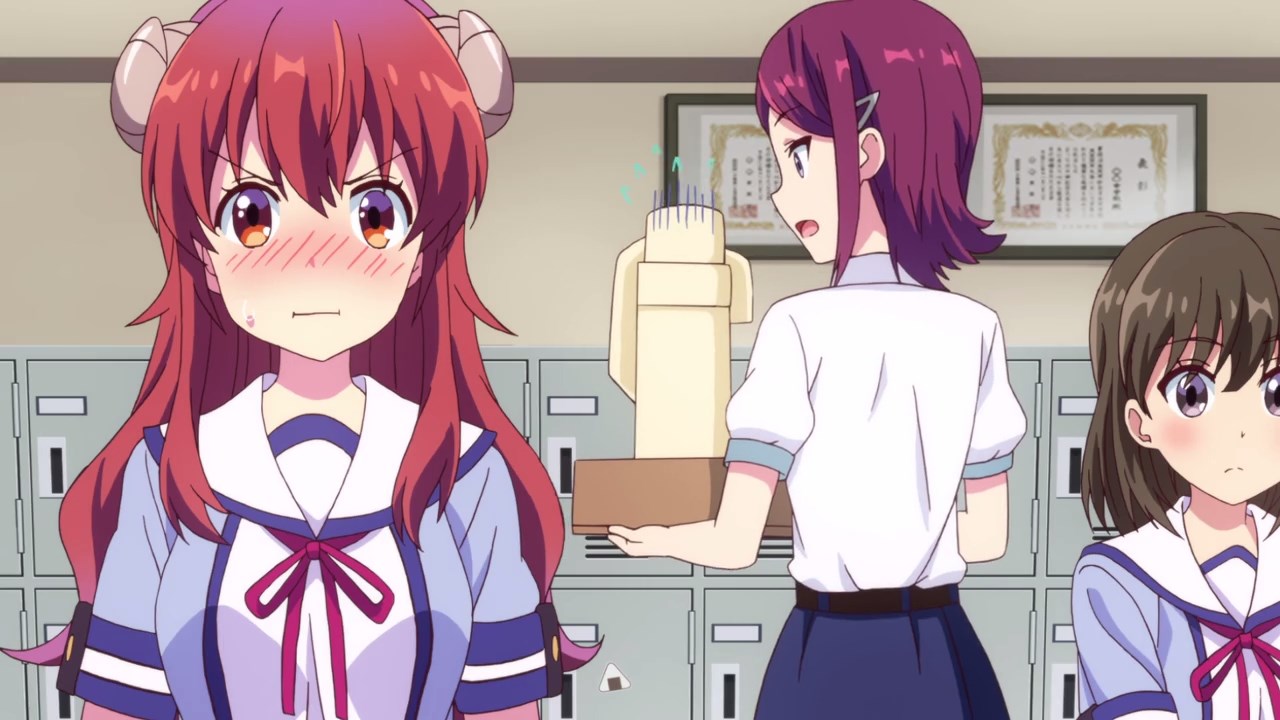 However, it appears that Shamiko has decided to take the exams fair and square as she asked her teacher to keep her thermos away. Yeah, Lilith is not pleased by it! 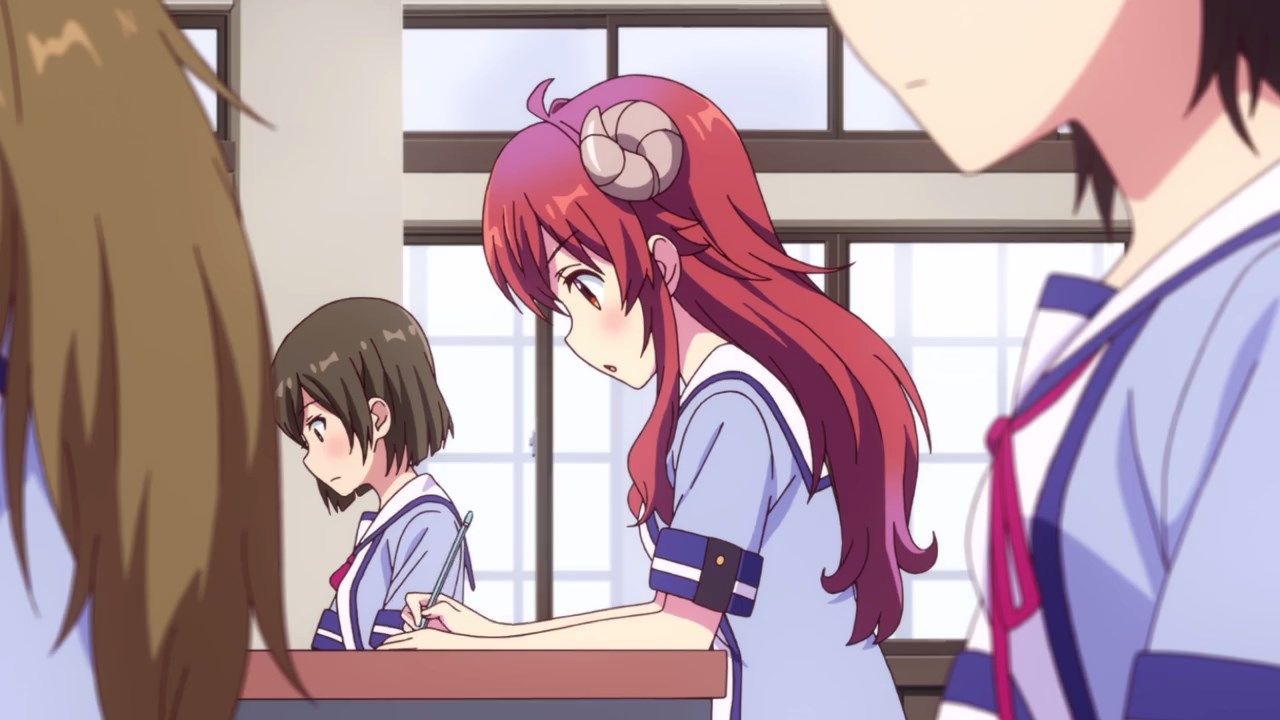 And so, Yuko Yoshida took the exams without relying on Lilith. After all, she wants to beat Momo Chiyoda through academic prowess. 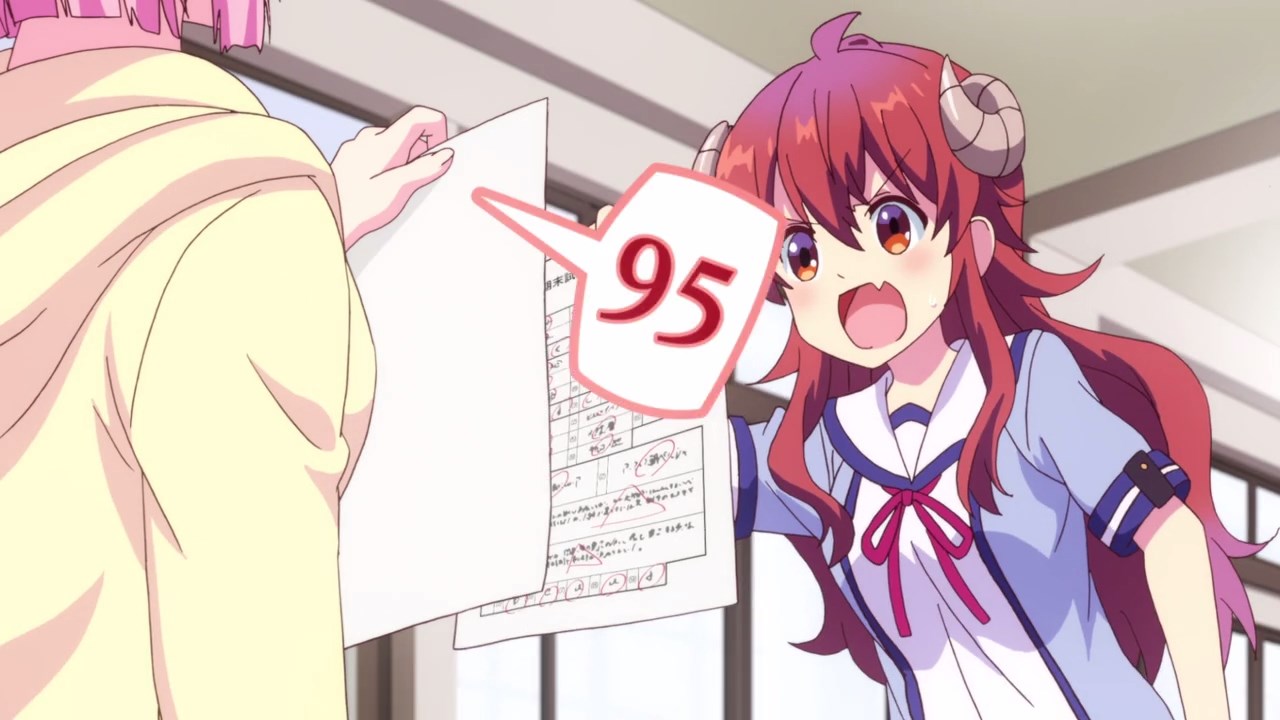 Afterwards, it’s time for Shamiko to show her test scores to Momo where unsurprisingly enough, Momo got 95 points but I wonder what’s Yuko’s test score? 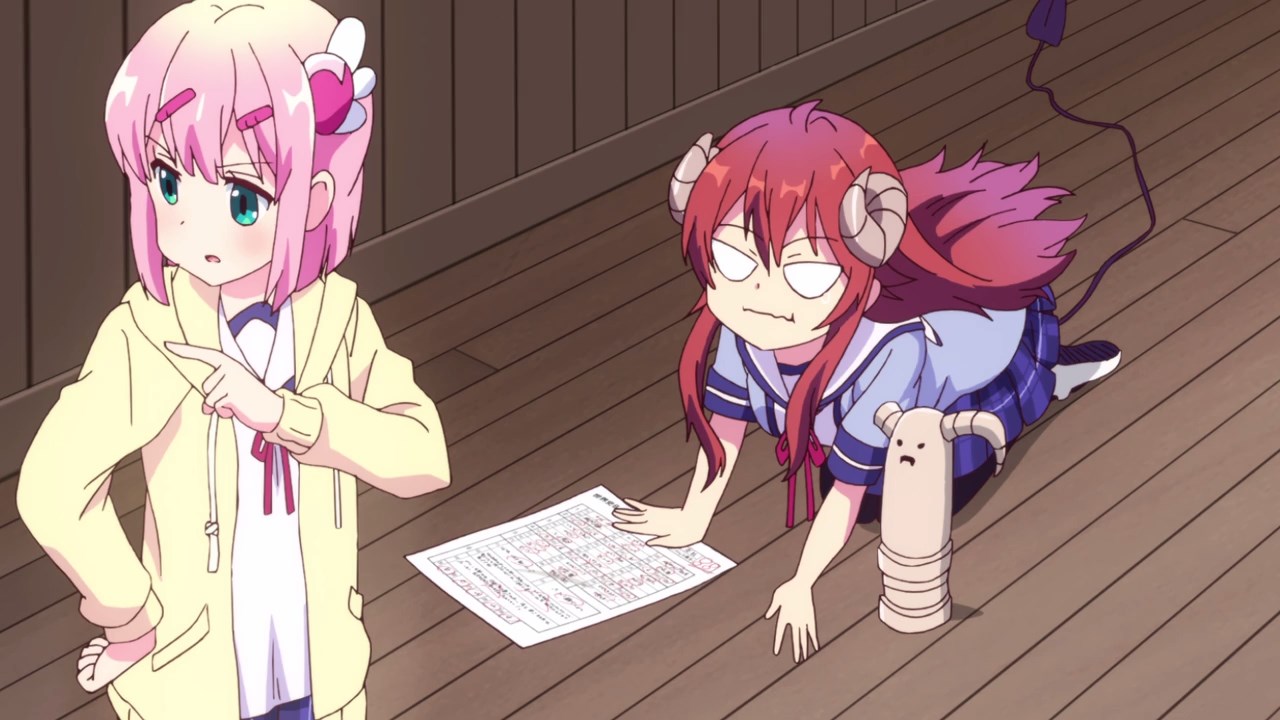 Surprisingly enough, she has 88 points out of 100 in world history, which means that Shamiko did well considering that she didn’t rely on Lilith.

However, Momo told Yuko to look at the board which shows the Top 5 students during the test. 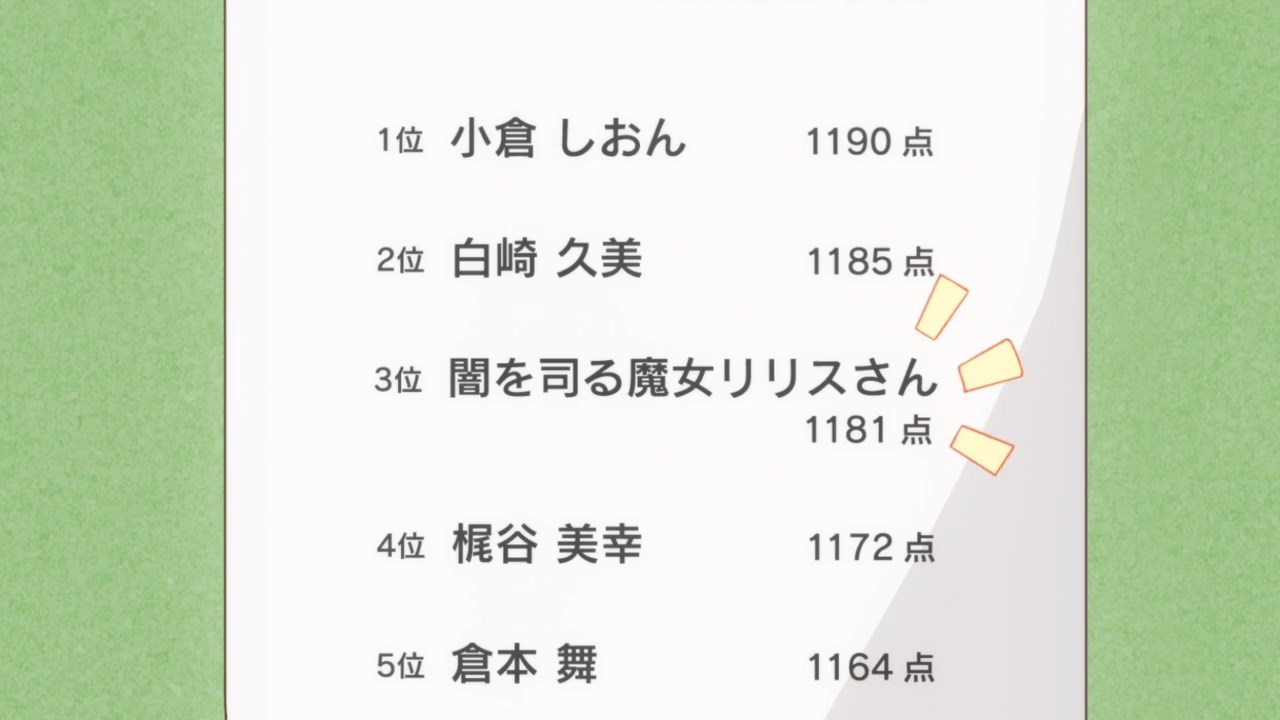 Turns out that Lilith actually participate in the exams and made into Top 3… over Momo Chiyoda!

Wait, how come Lilith got participate in the exams despite being a statue? 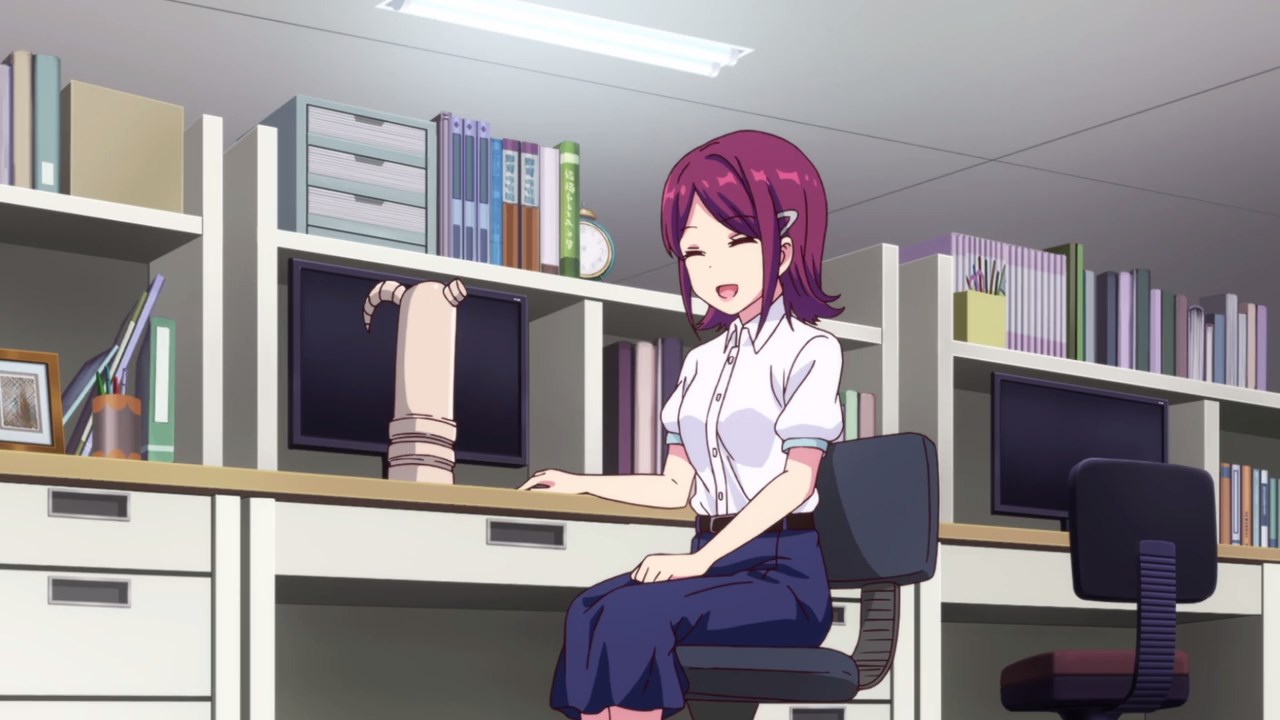 Well, Shamiko’s teacher asked Lilith if she wants to participate in the exams, which her ancestor agreed to take part of it and end up getting 3rd place. 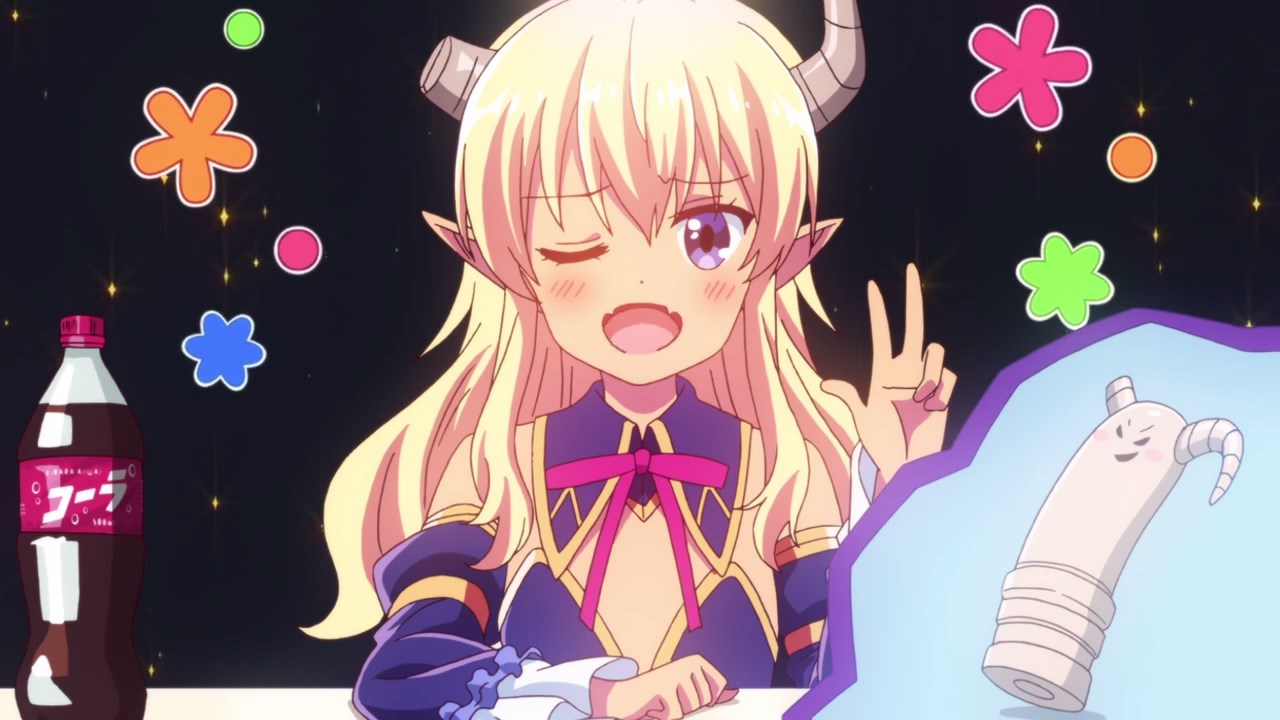 So yeah, I have to say that Lilith managed to beat Momo Chiyoda when it comes to academics. In fact, her knowledge in regards to ancient civilization like Mesopotamia and Egypt has helped Lilith to get a perfect score in world history! 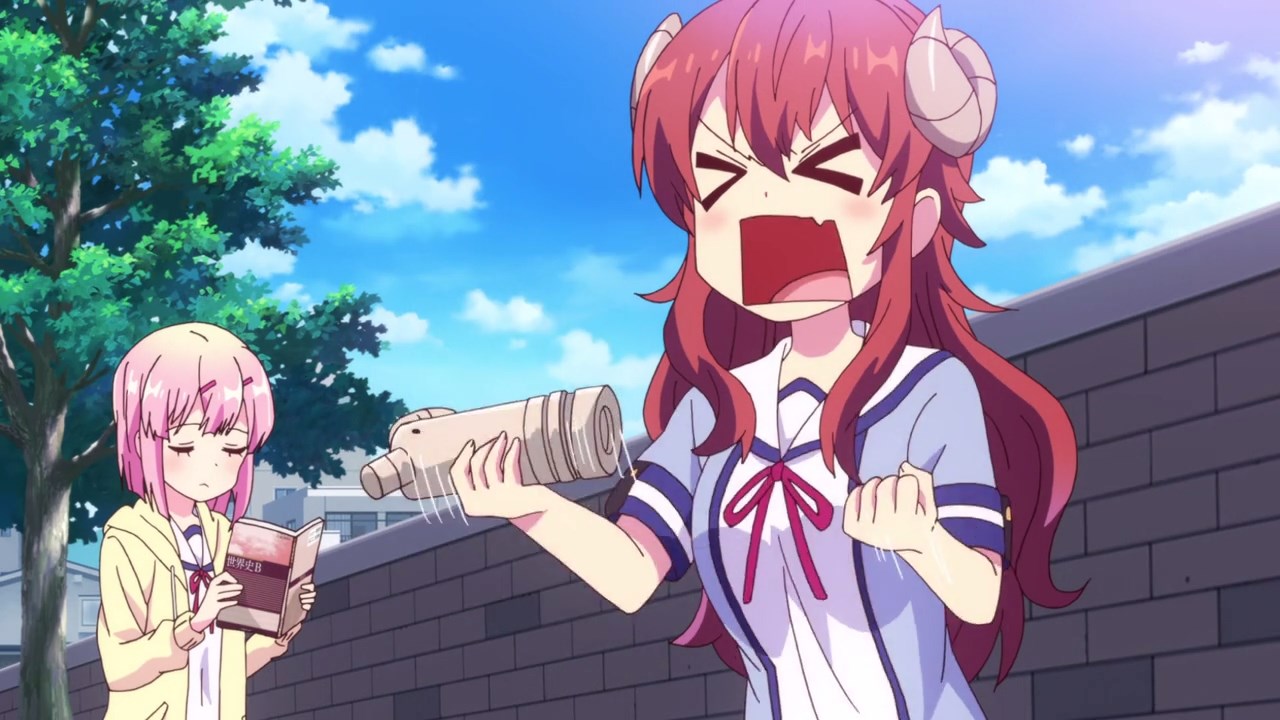 But as for Yuko Yoshida, she’s salty that the Shadow Mistress couldn’t beat Magical Girl Momo that she’s using her ancestor statue as a dumbbell.

Um Shamiko, Lilith might get dizzy if you lift it vigorously! 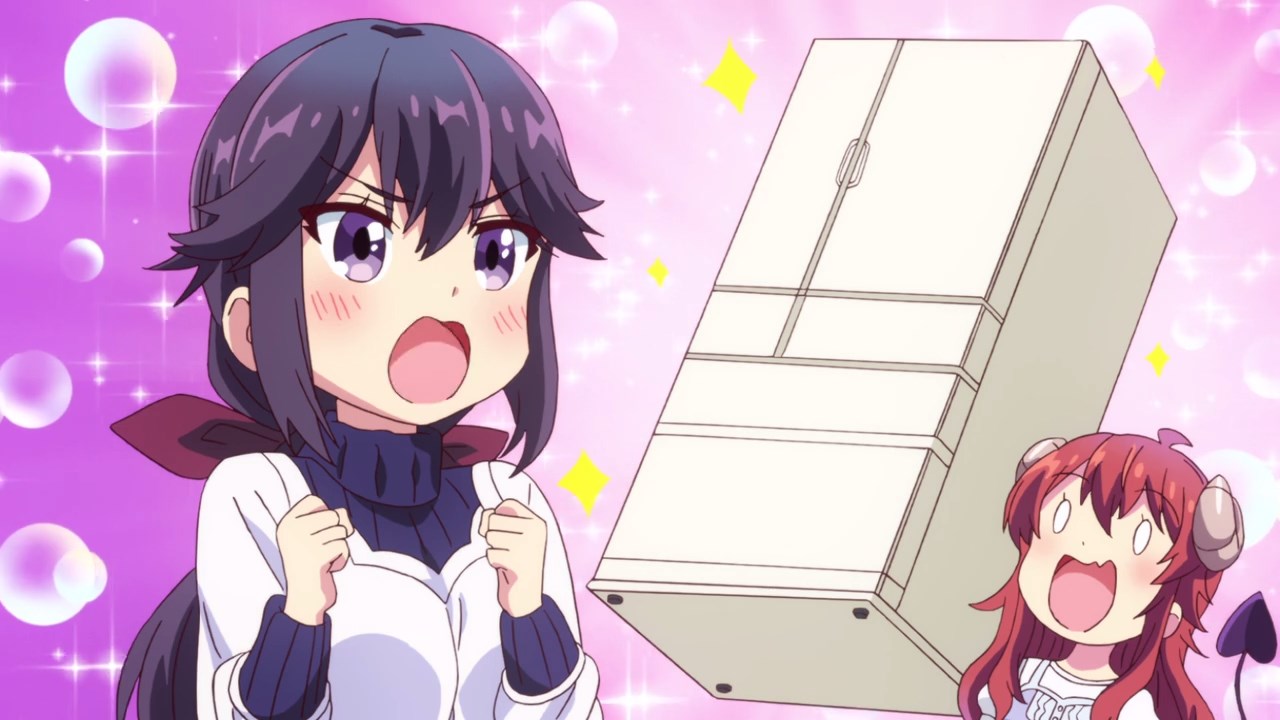 By the way, remember the time when their refrigerator got busted in Episode 7?

Well, Seiko ordered a new one since their fortune is starting to return thanks to Yuko accidentally offered Momo’s blood to her ancestor statue. 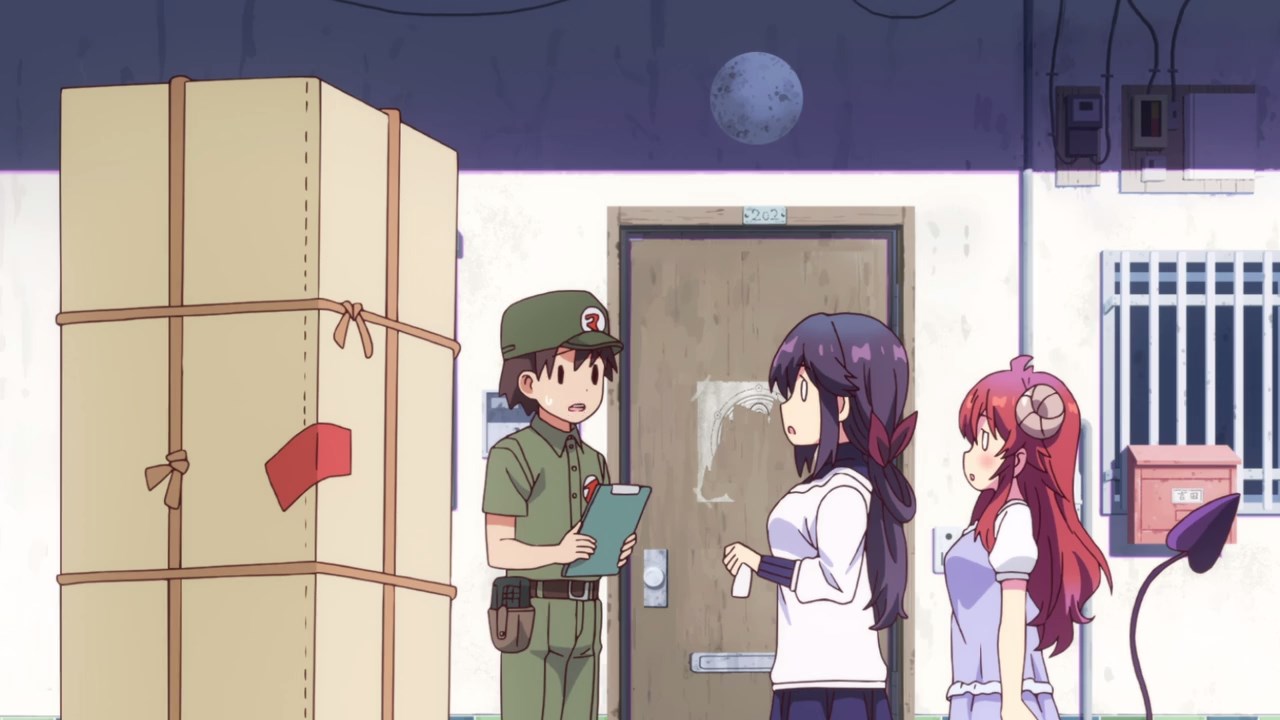 Unfortunately, the delivery man couldn’t put inside their brand-spanking refrigerator simply because it’s too tall to fit inside this tiny door.

Um Mr. Delivery Man, I think you should ask someone to help you and carry the refrigerator lengthwise inside their apartment. 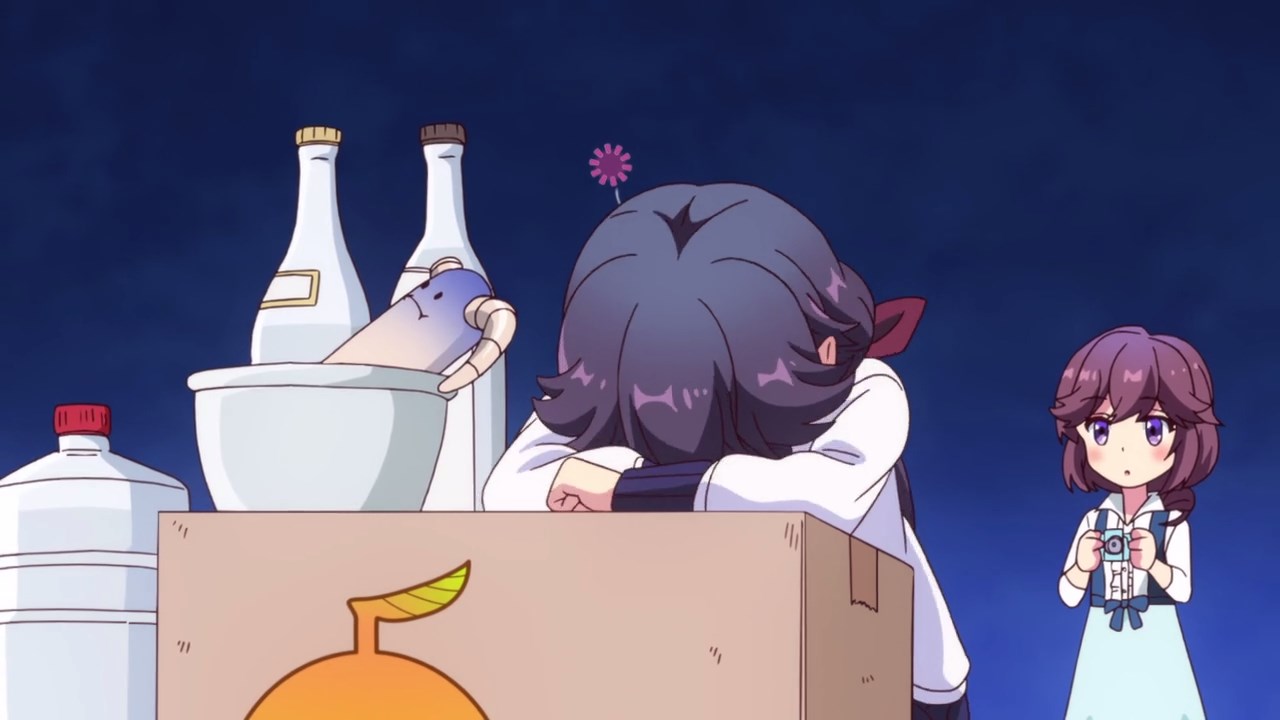 But still, Seiko Yoshida couldn’t get her new refrigerator as she drowns her sorrows with a bottle of sake. Even Lilith joins in to confort Seiko-san. 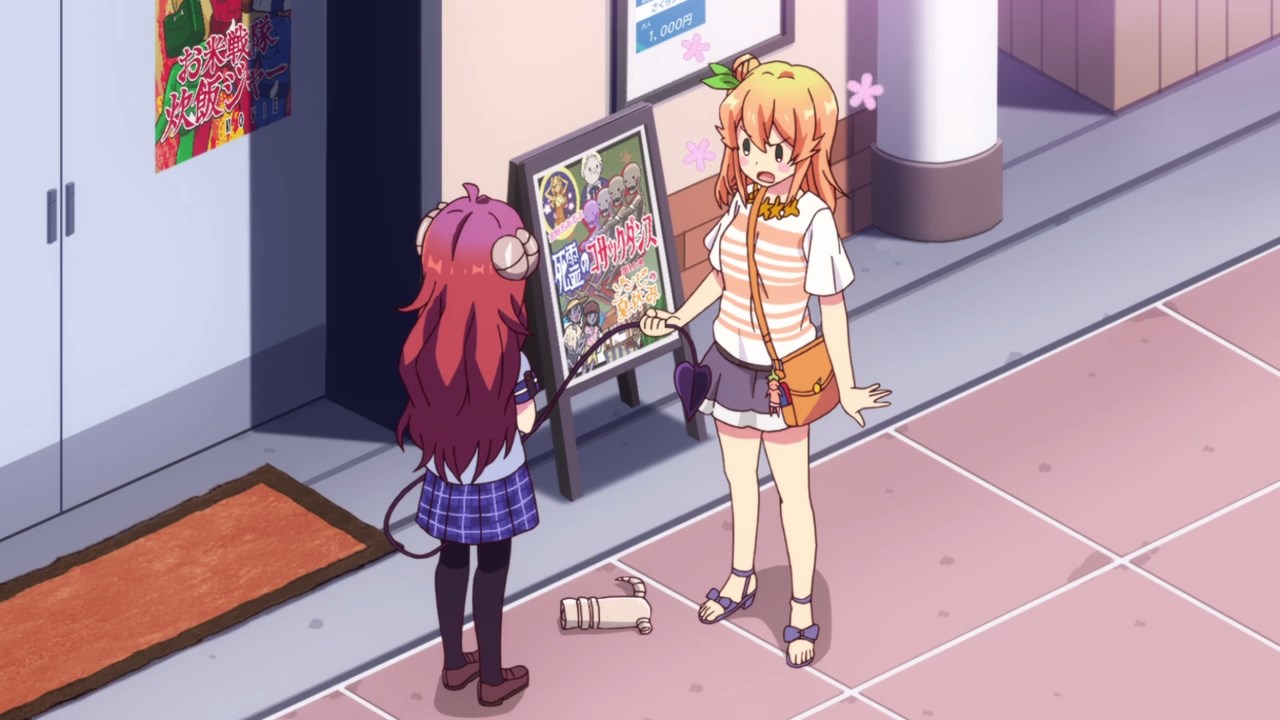 Let’s move onto the next scene where Mikan Hinatsuki asked Yuko Yoshida to watch a scary movie because she wants to get rid of her anxiety.

Now, Mikan maybe a magical girl but she’s cursed with bad luck when she got scared, excited, etc. Also, I think Yuko should pick up her ancestue right away because Lilith doesn’t like being thrown like a ragdoll. 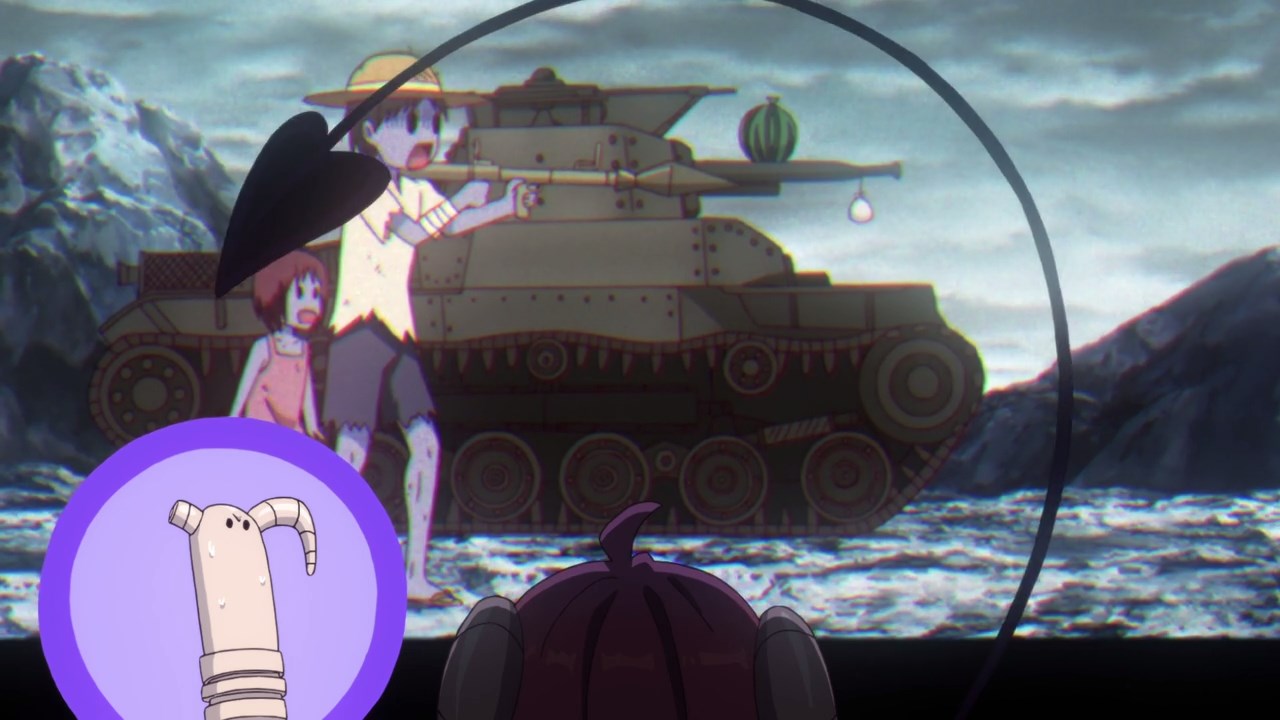 Anyways, they went to see a typical horror movie. But on the other hand, it appears that Lilith is enjoying it that she asked Shamiko not to cover the view. 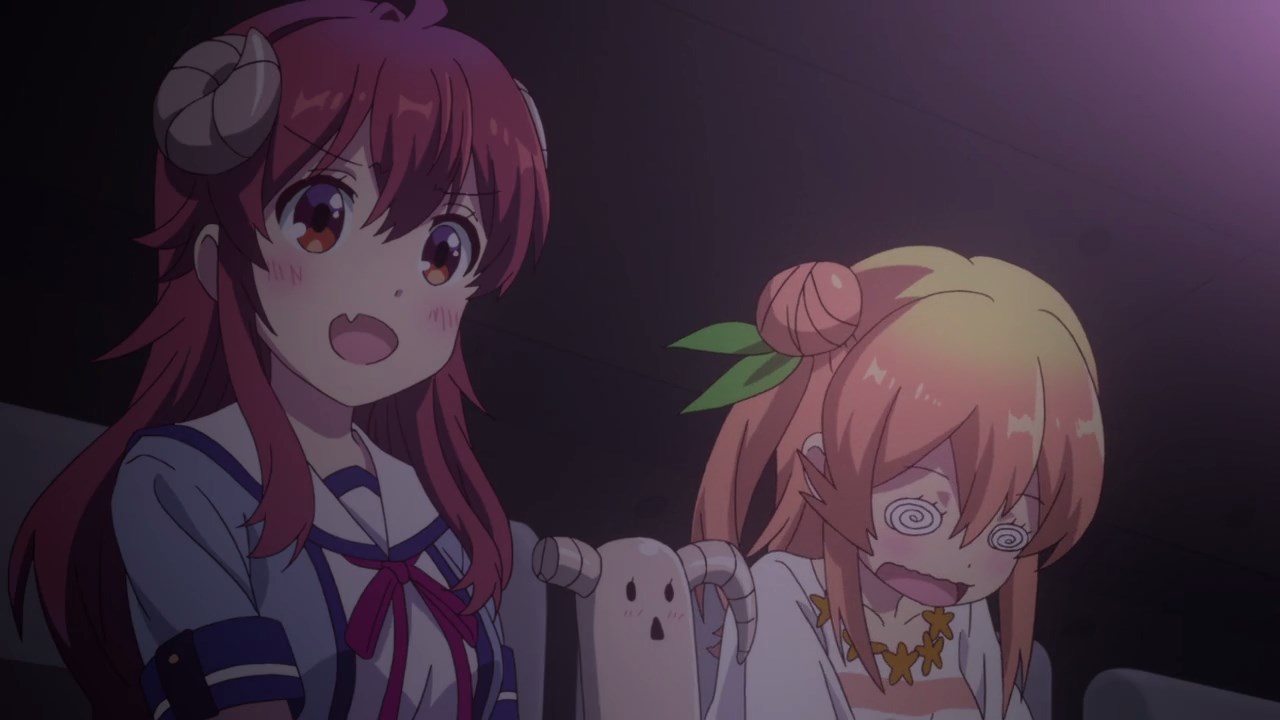 But as for Mikan Hinatsuki, she passed-out in the middle of the movie. But hey, at least she won’t get scared and cause a ruckus inside the theater. 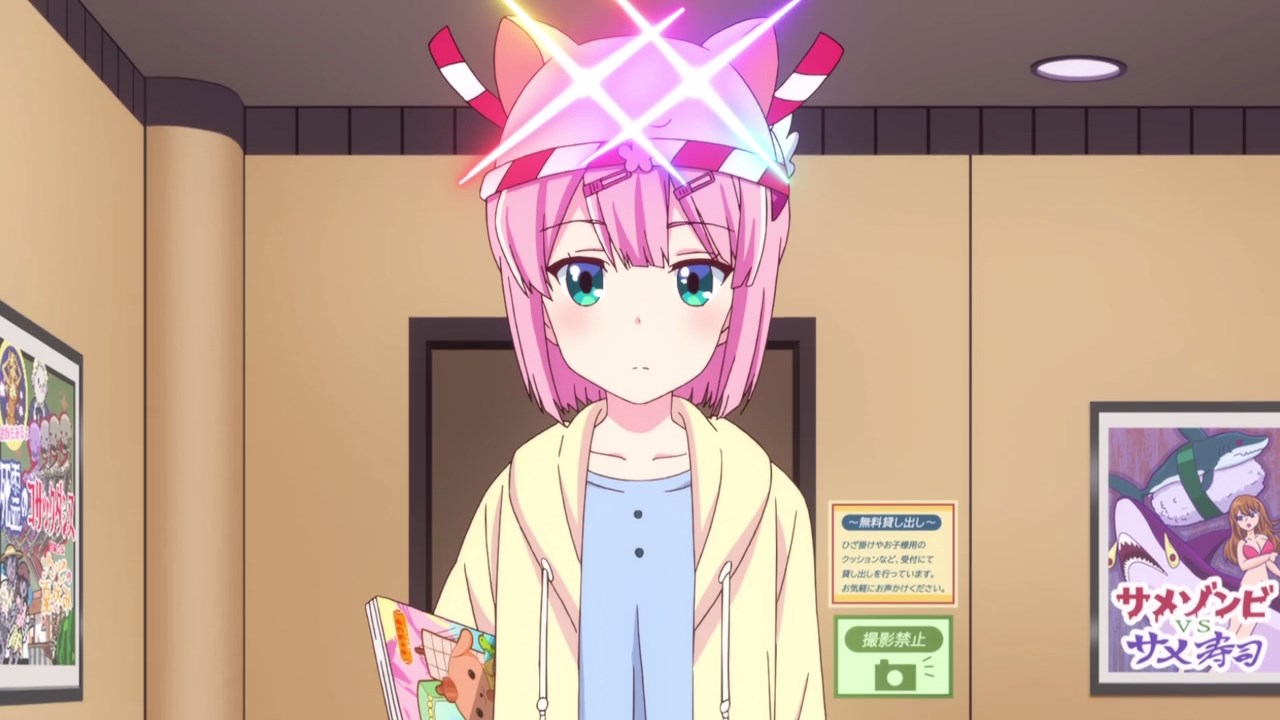 On the other hand, here’s Momo Chiyoda as she finished watching a cute movie about Tama Sakura. I mean, she’s decked-out with a Tama Sakura hat and holding a pamphlet! 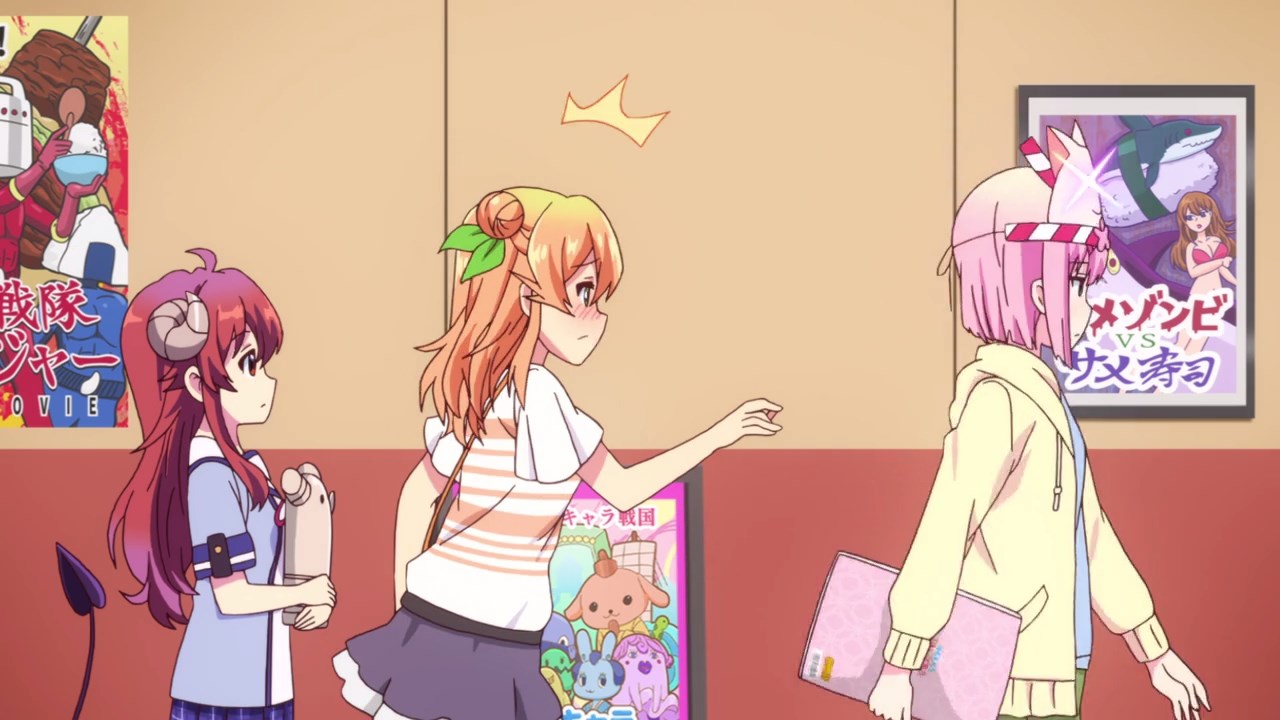 Unfortunately, Momo has to go home because she has other things to do. Well, looks like Mikan will have to watch a mascot film with Shamiko instead. 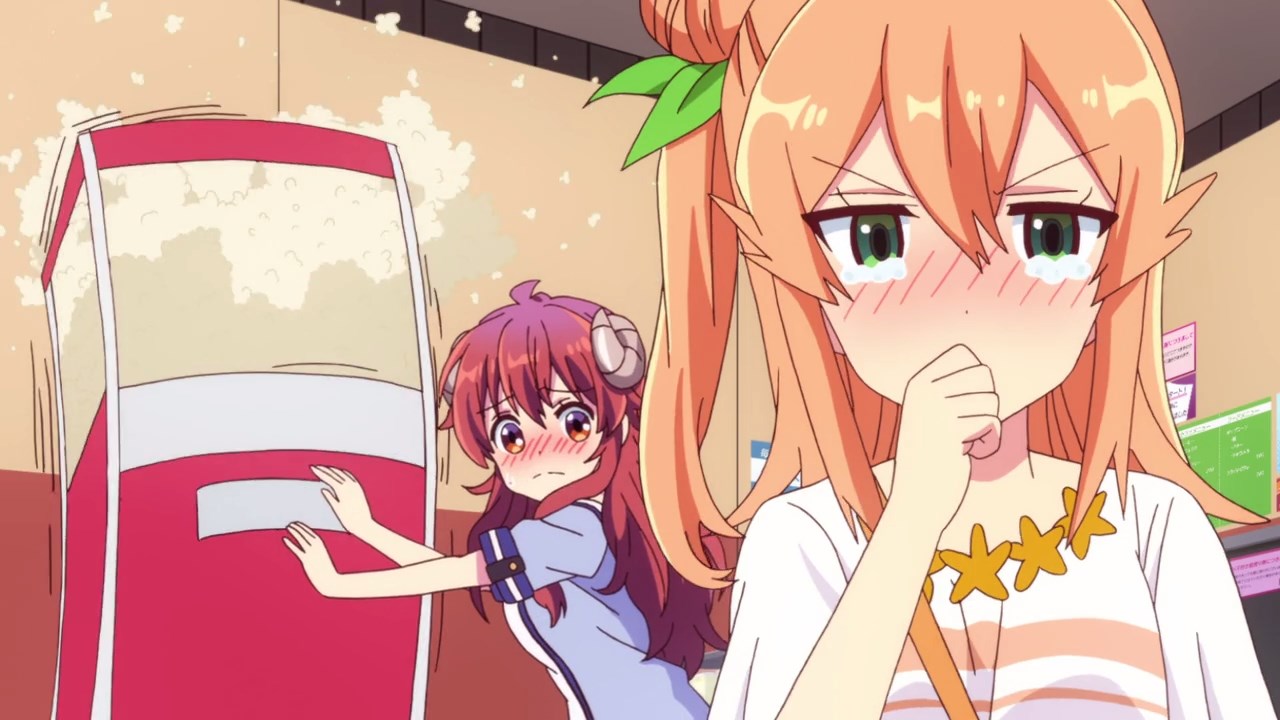 Then again, her curse is acting up again where this popcorn-making machine is poppin’ like crazy. In any case, Mikan Hinatsuki’s curse will not go away because she can’t control her emotions. 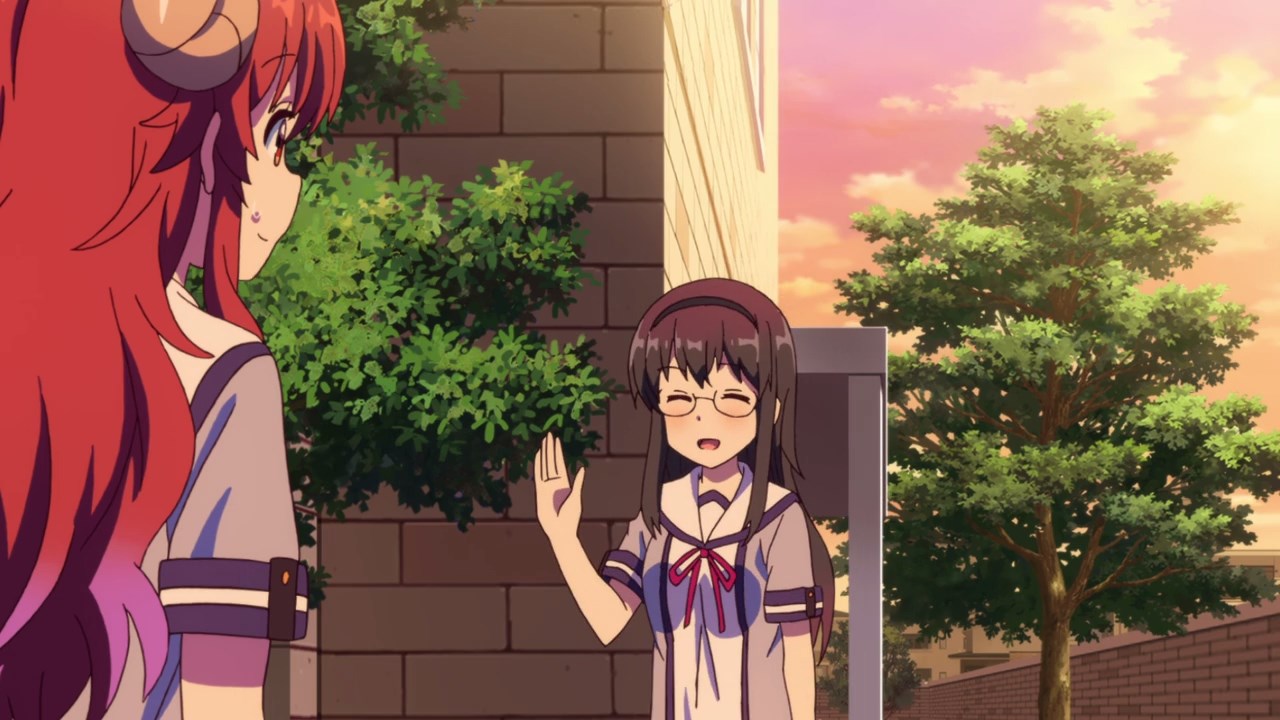 One last thing, here’s Shion Ogura where she’s acting weird lately. Turns out that Shion is studying magic in order to help Shamiko on her quest to revive the Dark Clan.

Then again, having Shion learn magic might cause trouble in the long run, even worse if her magic might harm Yuko. But anyways, I’ll see you next time and let’s hope nothing bad will happen for the Shadow Mistress!