Posted on October 7, 2019 by benigmatica 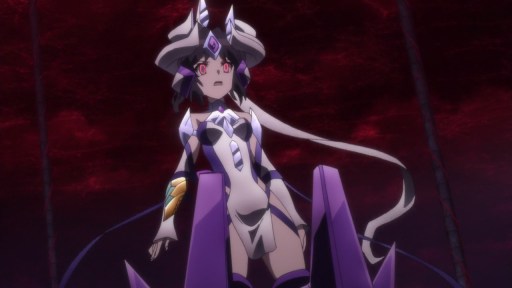 And so, we’ve finally reached the last episode of this final season of Symphogear! For Shem-ha, she’s not amused that the Symphogear users have arrived to stop her plans for conquering humanity. 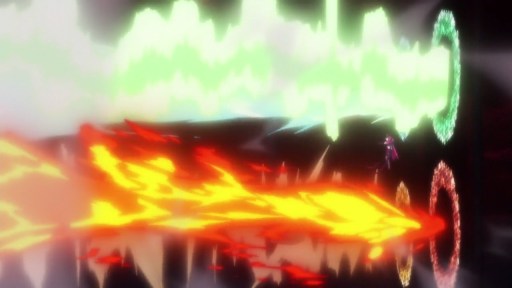 However, Shem-ha needs to deal one more pesky intruder, aside from Hibiki Tachibana and her friends, as Carol Malus Dienheim has returned to fight once more.

With Carol’s alchemy, it appears that she managed to decimate the god… or is it?

Actually, Shem-ha is not yet dead as she summoned a giant body that’ll be used to protect herself from any attacks…

…as well as a myriad of fish-like drones that fires lasers. Yeah, that’s gonna suck for the Symphogear users as well as Carol Malus Dienheim!

But not for Hibiki Tachibana though as she’s gonna deflect it with her arms.

Glad that her training with Genjuro Kazanari has put into good use for this final battle, but Hibiki is not done yet!

For you see, she’s gonna plow her way towards those small fries with her blazing fists. Of course, she’s not the only one who’s gonna stop Shem-ha… 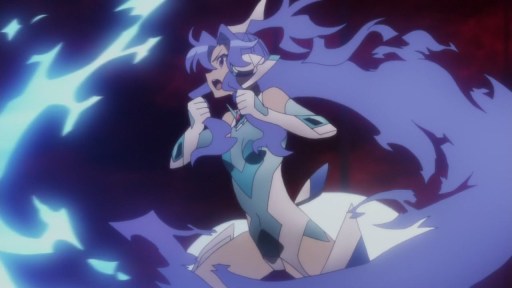 In fact, here’s Tsubasa Kazanari where she uses her fiery long hair to whip her enemies. Wow, I’m impressed that Tsubasa-san is doing the lion dance!

Not to be outdone by Tsubasa-san and Hibiki, Chris Yukine creates a giant astral projection of herself and fires a large blast towards Shem-ha’s minions.

And as you can see, it’s a direct hit! Well, looks like this Custodian won’t have her minions, but at least she’s covered in that giant body of hers!

Nah, let’s change that as Shirabe Tsukuyomi and Kirika Akatsuki combined both Shul Shagana and Igalima to create a powerful weapon.

Scratch that, make it 3 as Maria Cadenzavna Eve joins in as she lends her Airgetlám…

…to form this giant robot! Damn, I can’t believe that they pulled something so batshit insane for this final battle! 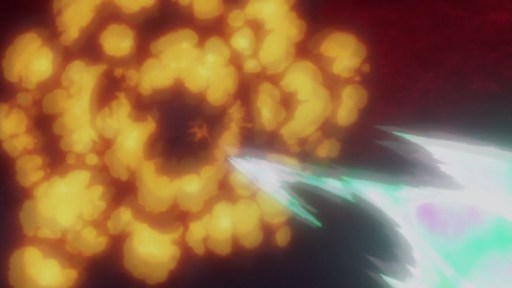 Well, it appears that the Symphogear users pulled all the stops to destroy Shem-ha!

Unfortunately, it’s not enough to stop this Custodian as Shem-ha is about to destroy them. Even though the Symphogear users unleashed everything, it appears that Hibiki Tachibana hesistated on hitting her best friend with full force.

And so, humanity’s hope has been crushed as Hibiki Tachibana and her fellow Symphogear users are killed by Shem-ha… or is it?

Actually, Carol Malus Dienheim stepped in to stop Shem-ha’s lasers from hitting them.

Also, Carol told Hibiki not to hesistate on reaching her hand to save Miku from Shem-ha’s control. After all, Hibiki did the same thing to Carol back in Symphogear GX. 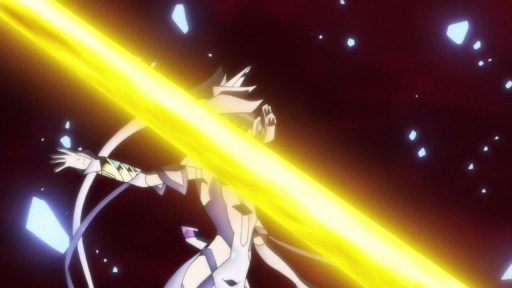 Anyways, Carol Malus Dienheim reflected Shem-ha’s attacks in which the Custodian got hit and one of her horns turned into gold. That’s the power of Carol’s alchemy.

Unfortunately for Carol, it appears that she exhausted all of her powers and reverted to Elfnein. Don’t tell me that Carol used all of her memories to stop Shem-ha’s attacks? 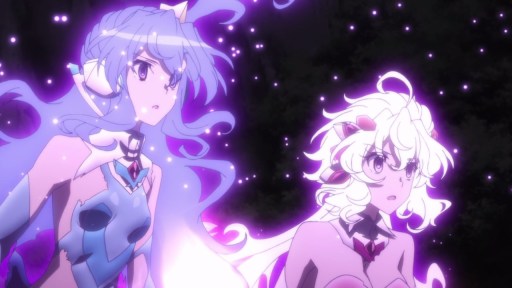 Meanwhile, something bad happened as Hibiki’s friends couldn’t move, as if they’re being controlled by someone else. Wait, is Shem-ha planning to brainwash the entire human race?

Why of course now that the Curse of Balal is lifted. After all, she’s planning control humanity until they’re united as one hive mind.

Unfortunately for Shem-ha, Hibiki Tachibana has other plans as she’ll use her god-killing fists to snap her friends out of Shem-ha’s control.

And it’s not just her friends, but the entire world as everyone regained their consciousness as they continue to stop the Custodian from enroaching Earth with its Yggdrasil towers.

Oh yeah, and thanks to Hibiki Tachibana, everyone is united as they fight together for humanity’s future. Now, the only thing left to do is for Hibiki to reach her hand and rescue Miku Kohinata!

And so, it’s time for the time-honored tradition of naming the final attack based on Nana Mizuki’s song…

…as Hibiki delivered one “Metanoia” hug to Miku in order to break free from Shem-ha’s control.

I gotta love this scene as instead of punching the last boss, Hibiki will do a cooldown hug to rescue her friend! Thank you Nana Mizuki for this wonderful song! 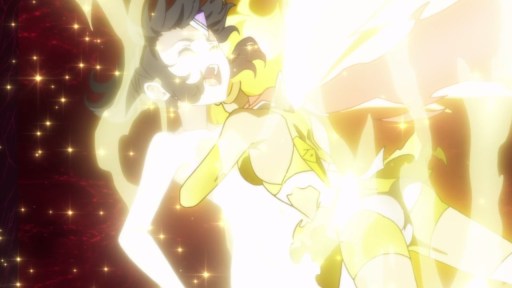 Anyways, Miku Kohinata is finally saved from Shem-ha’s control as the bracelet is broken into many pieces, thus the crisis is finally over!

Of course, stopping Shem-ha comes at a price as Elfnein is scared that Carol Malus Dienheim will disappear forever. 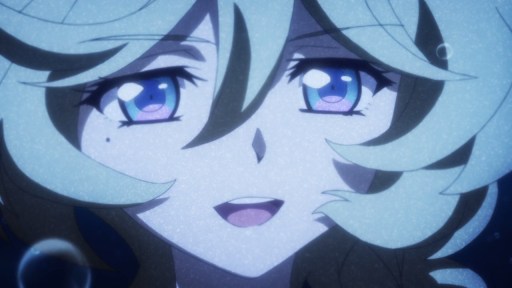 Then again, Carol doesn’t want Elfnein to have a sad farewell because Elfnein will still remember her other self. Those memories are gone, but Carol’s soul will remain in Elfnein’s heart.

Well then, it appears that Elfnein is finally awakened, but she still laments the loss of Carol Malus Dienheim.

On the other hand, it appears that this battle isn’t over despite Shem-ha’s defeat at the hands of the Symphogear users… 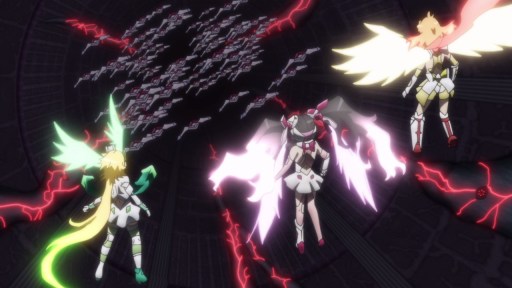 In fact, the Yggdrasil towers still remained and it continues to enroach the entire planet. Thus, Hibiki and the rest must go deeper and destroy the core.

However, they’ll have to deal with these pesky minions first. Come to think of it, I wonder if they’re cut from the same cloth as Noise, or they’re actually the originators? 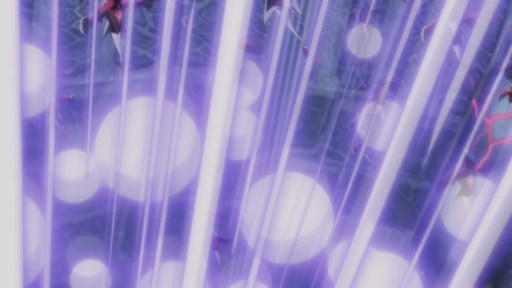 Suddenly, those minions got blasted away with lasers. Okay, is Chris-chan firing lasers from her gatling gun ’cause she can unleash a salvo of rounds to pulverize those small fries? 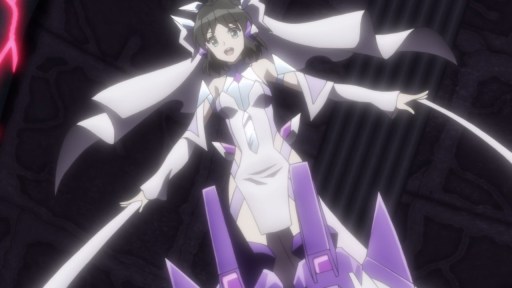 Oh, it’s Miku Kohinata where she joins the fray to help Hibiki Tachibana and the rest of the Symphogear users. Gotta say that Miku is using Shenshou Jing without being forced to use the relic.

Now then, the Symphogear users have finally reached the core but in order to stop it, they need to perform a swan song together.

Of course, the chances of surviving it is 50/50, the swan song is the only one to stop Yggdrasil’s core!

So, Hibiki and the rest performed the swan song to destroy the core, but something amazing happened during their ordeal as various spirits appeared to aid them like Finé and Enki.

Well, I’m glad that Finé has finally reunited with her lover after her attempts to reach and destroy the moon from the first season! 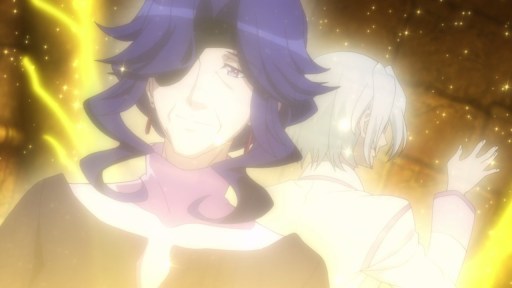 Oh and it’s not just Finé, but also Prof. Nastassja Sergeyevna Tolstaya and freaking John Wayne “Dr. Ver” Vercingetorix! Dammit, I can’t believe that the doctor is here for one final time! 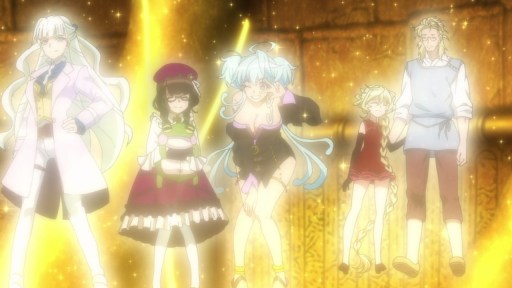 There’s also the Bavarian Illuminati (except for Adam Weishaupt obviously), as well as Carol Malus Dienheim where she’s joined by her father. Of course, there’s more to come…

In fact, both Tsubasa Kazanari and Maria Cadenzavna Eve are greeted by their respective loved ones. From Serena Cadenzavna Eve to even Kanade Amou, I’m glad that they’ve returned to support both Maria and Tsubasa-san, respectively. 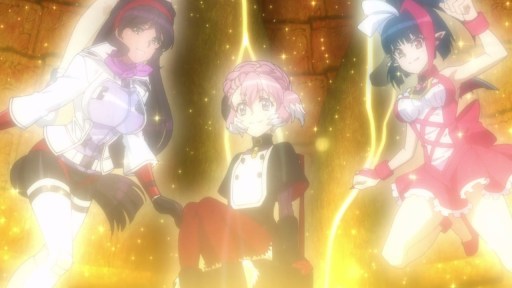 And lastly, here’s Noble Red as they’re gonna aid the Symphogear users to save the future, although I still hate Millaarc Cranstoun for what she did in Episode 2. 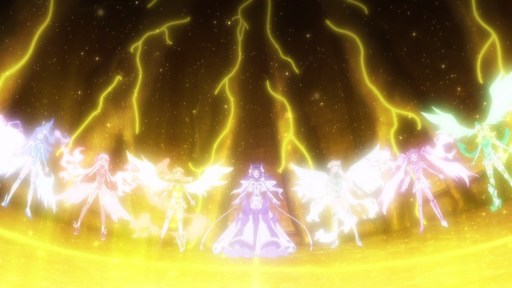 In any case, the Symphogear users gave their all as their swan song will save Earth from being enroached by Yggdrasil.

And really, I feel that music not only brings everyone together despite speaking in various language, but also gives humanity a bright future. Man, I’m kinda crying on this scene where all 7 users are singing in unison!

Thanks to the Symphogear users’ efforts, the Yggdrasil towers are starting to crumble down now that the core is completely destroyed.

But, it appears the vengeful soul of Shem-ha still remains as she’s gonna drag the Symphogear users to hell. Man, when will this Custodian give up? 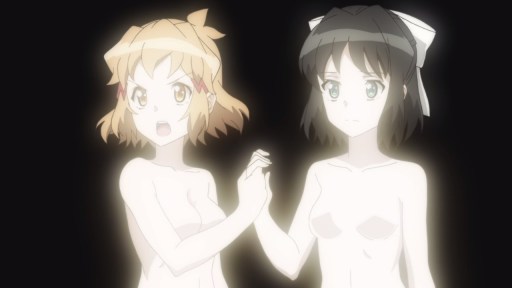 Anyways, it appears that Shem-ha won’t accept defeat just yet as she questions both Hibiki and Miku on why they refuse to let humanity being controlled by one entity.

But you know what, Hibiki and Miku will find a way to have an understanding among humanity as they have endless possibilities to attain it!

Anyways, Shem-ha finally accepts defeat as she leaves humanity’s future into their hands.

Despite acting like assholes to each other, humanity will find a light at the end of the tunnel and attain co-existence amongst themselves, and possibly extraterrestrial beings.

So while Shem-ha disappears, I’m worried that Hibiki Tachibana and the rest of them might not survive. After all, who’s gonna tell the rest of humanity to secure a bright future if they didn’t live? 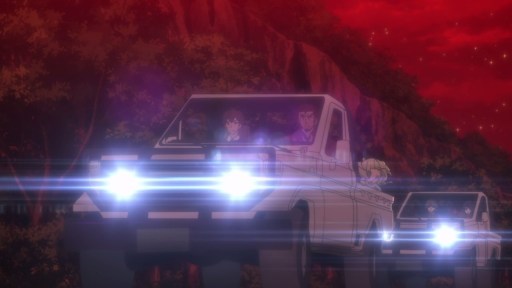 Now then, looks like SONG is rushing towards the scene, hoping that Symphogear users are alive, although the chances of survival might be slim.

But surprisingly though, Shem-ha decides to let them live in order to secure humanity’s future. Well, glad that the Earth is saved thanks to Hibiki Tachibana and the rest of the Symphogear users!

And that concludes Symphogear XV and all I can say is that Noriyasu Agematsu and Satelight did a wonderful job to close out Hibiki Tachibana’s story. Of course, there are some things that I don’t like such as Noble Red, especially Millaarc where she did the most horrible thing in Episode 2. Oh yeah, and let’s not forget about Fudou Kazanari where he’s freaking despicable as a final boss, although it would be nice if Shem-ha kills him off for using the Custodians’ power for his own ambition.

Regardless, this is the best season for entire Symphogear franchise and I really recommend on watching Symphogear XV because this is one climatic closure! 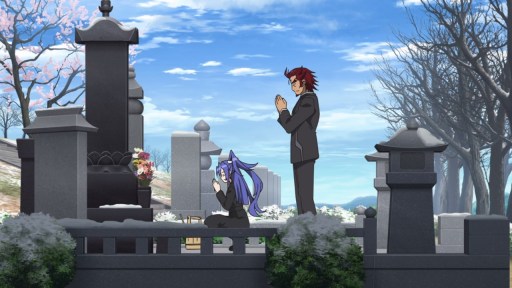 And now, it’s time for the epilogue where Tsubasa and Genjuro Kazanari pay their respects to Yatsuhiro Kazanari. Of course, we’re not gonna talk about Fudou ’cause he’ll be forgotten until death for the crimes he committed! 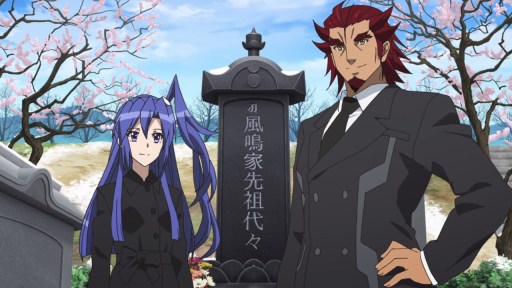 Speaking of Tsubasa-san, I have to say that she got better thanks to the support of her companions, especially Hibiki Tachibana and Maria Cadenzavna Eve where they pulled Tsubasa Kazanari from despair!

Of course, the most important of all is Hibiki Tachibana where she can finally see the stars with Miku Kohinata. Man, I think they should get a room because honestly, Hibiki loves Miku so much! 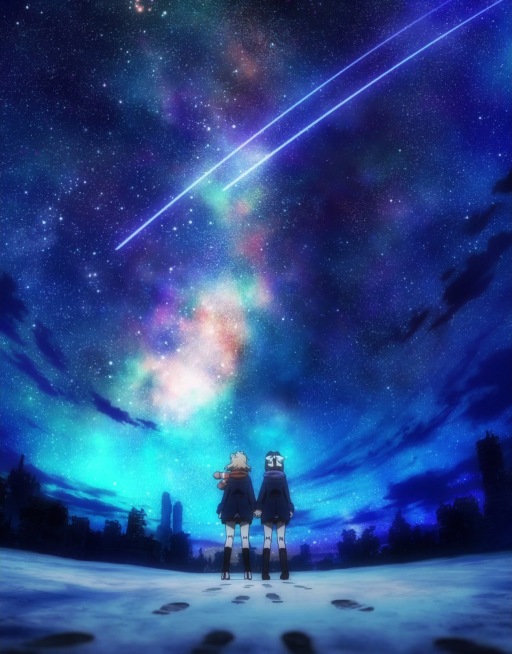 And now, let’s end this post where Hibiki and Miku finally saw two shooting stars. Man, this is how Satelight ends Hibiki’s story and I’m gonna miss her so much!

Thank you for those 5 seasons of awesome, Symphogear!