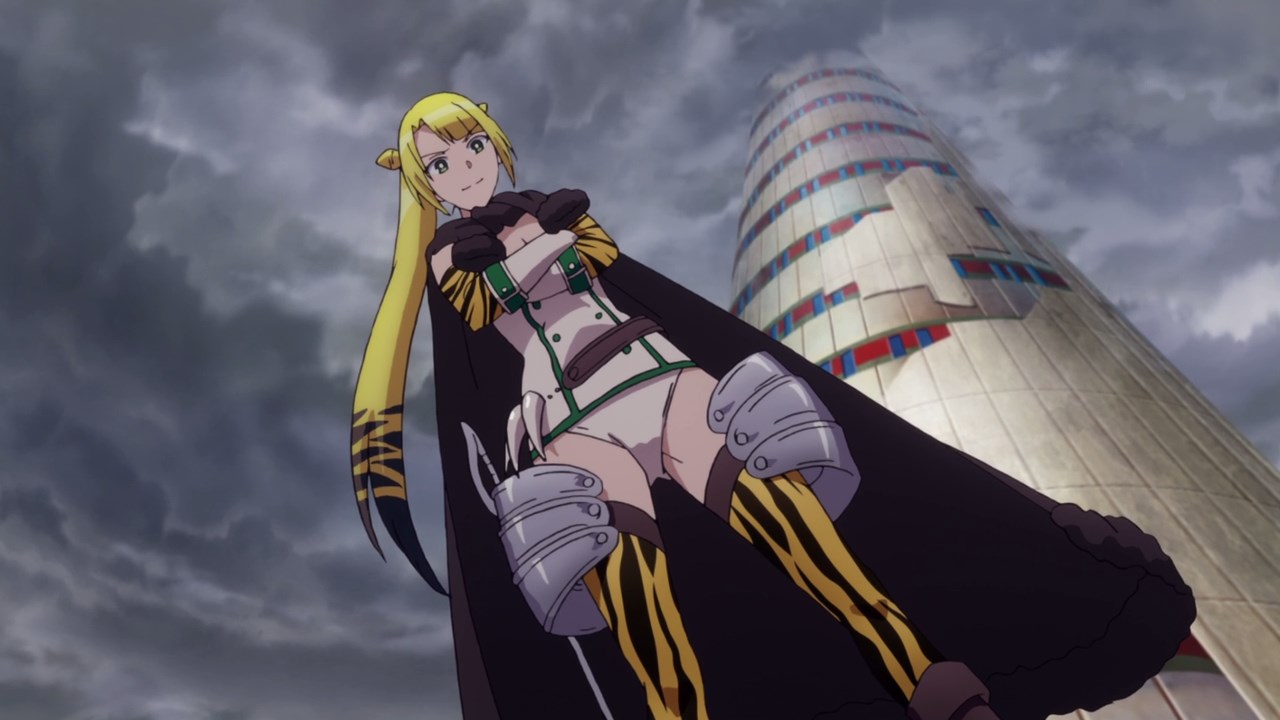 This is Amante, and she is planning to climb to the top of the tower and make the most dangerous wish ever, which is erasing all mothers across the planet.

But wait a minute, that’s the most stupid wish ever as the irony of it is that Amante will become a mother someday, and you know that her wish will cease her existence eventually! God, Amante is an idiot! 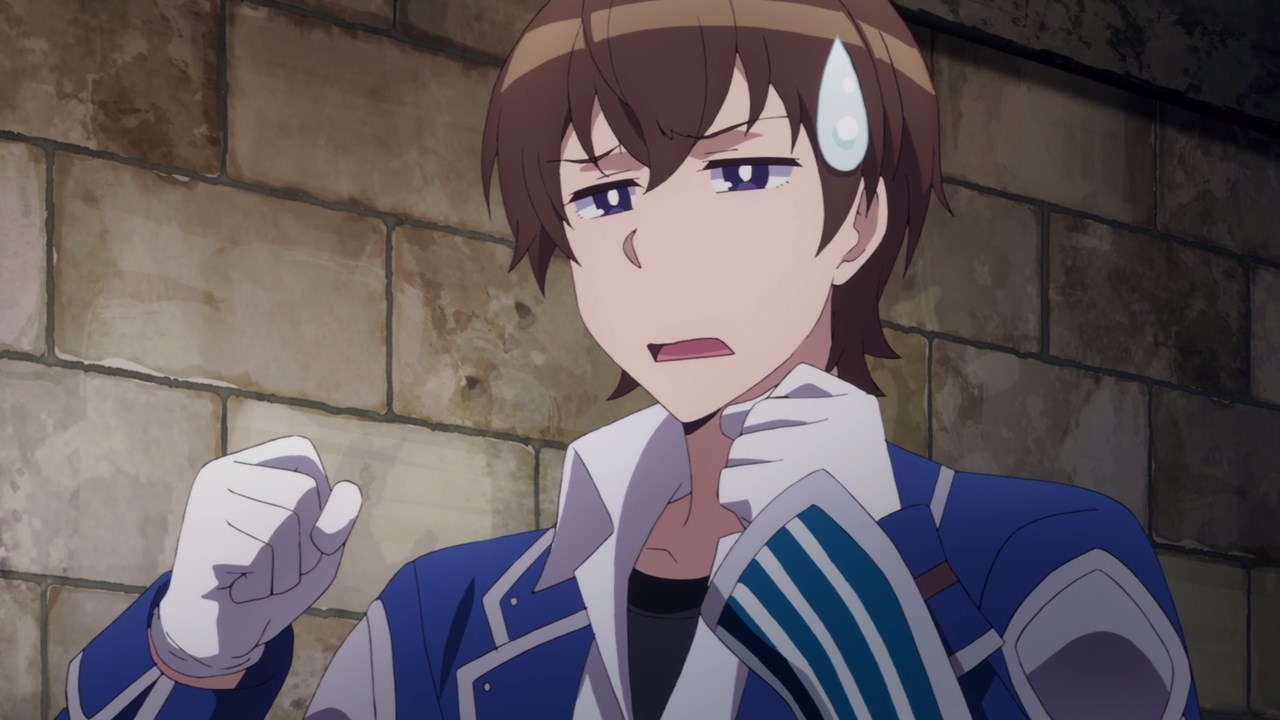 Now then, it’s time for the final episode where Masato Oosuki and the rest are heading towards the top of the tower.

However, Masato and his party got separated as they stumble upon a room full of traps and illusions. 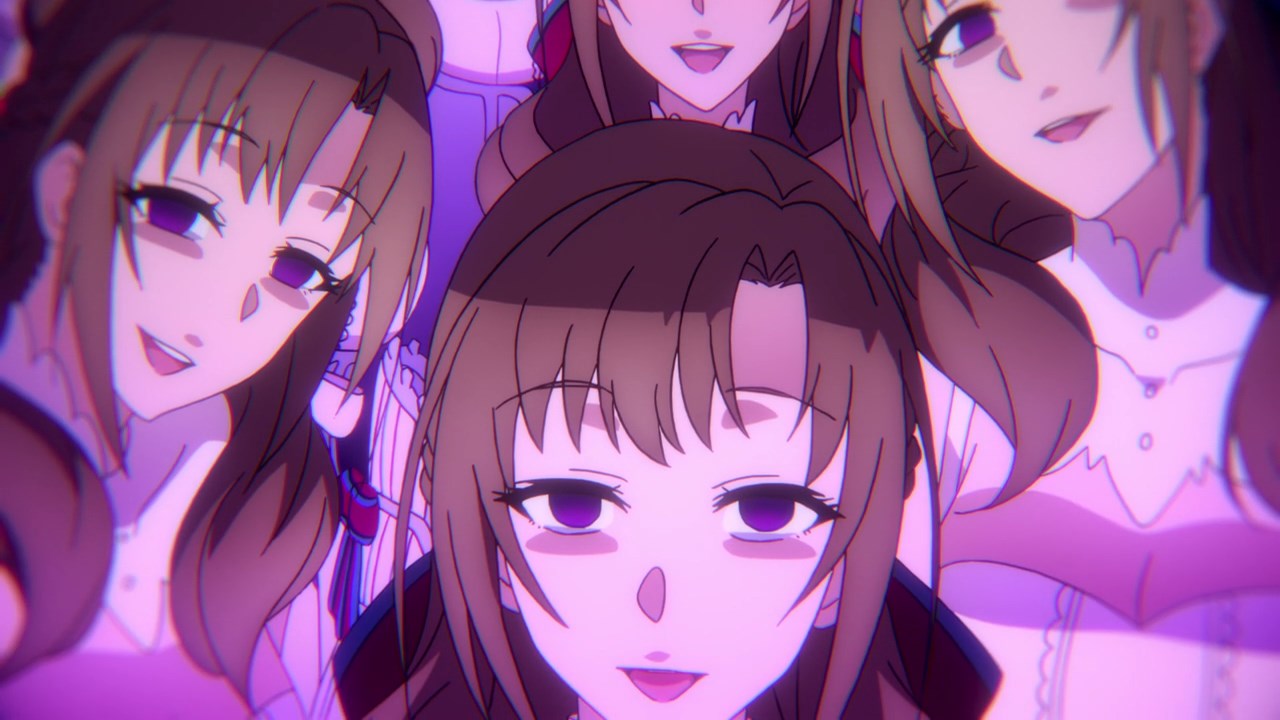 Heck, one of the rooms is filled with Mamako look-alikes. Scratch that, this room is basically Mamako Hell and damn, will the real Mamako Oosuki please stand up!? 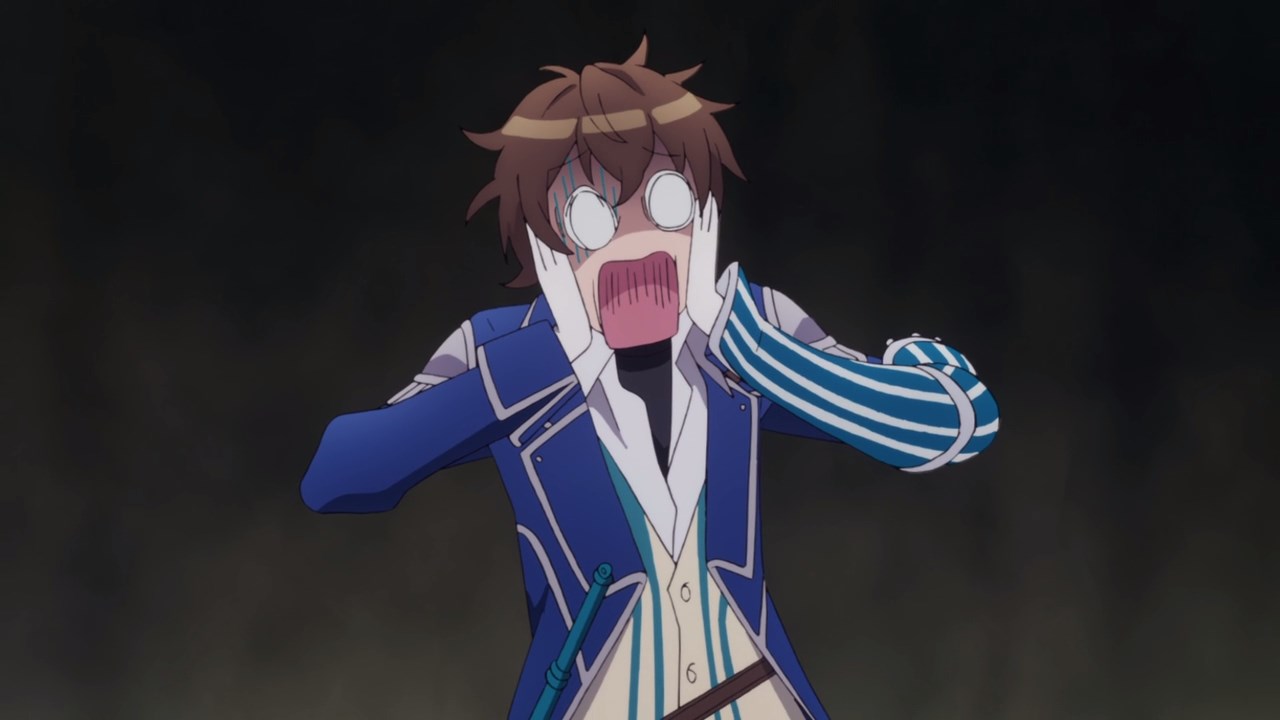 Even Masato Oosuki is terrified that he’s being mobbed by an army of evil Mamako clones. One more time, will the real Mamako Oosuki please stand up!? 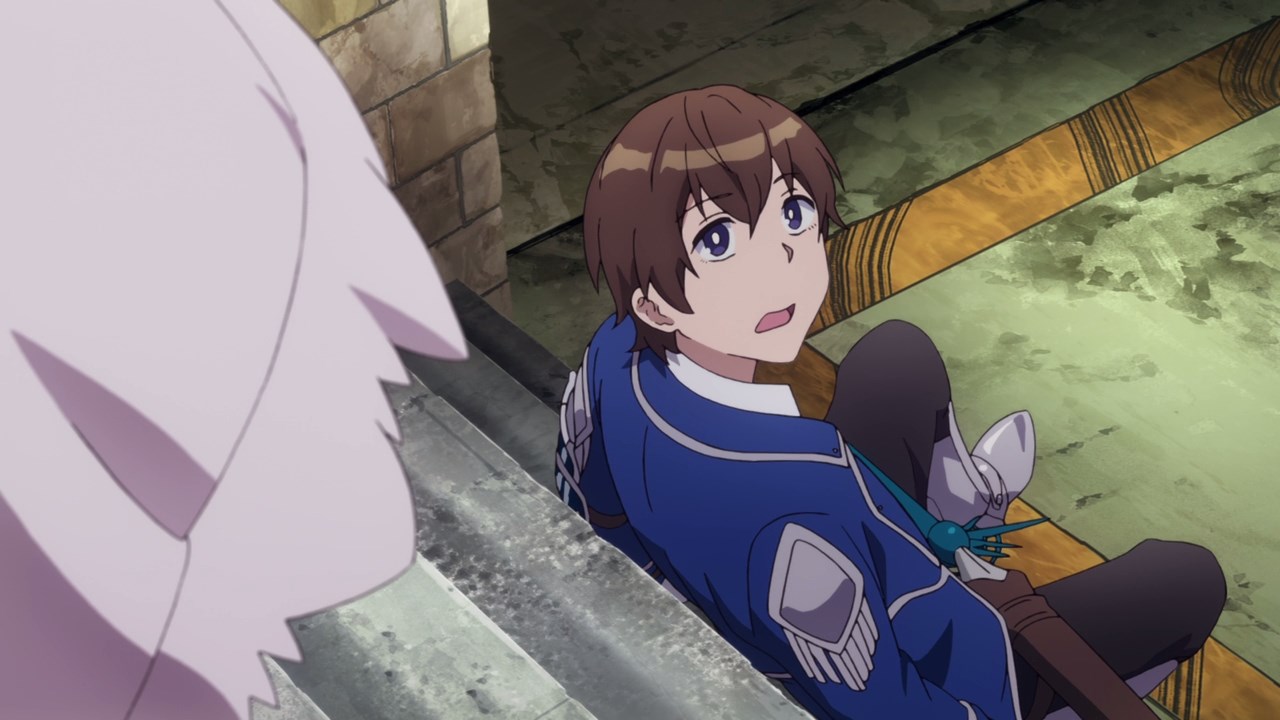 Fortunately, Masato found some glimmer of hope as a certain character appeared behind him… 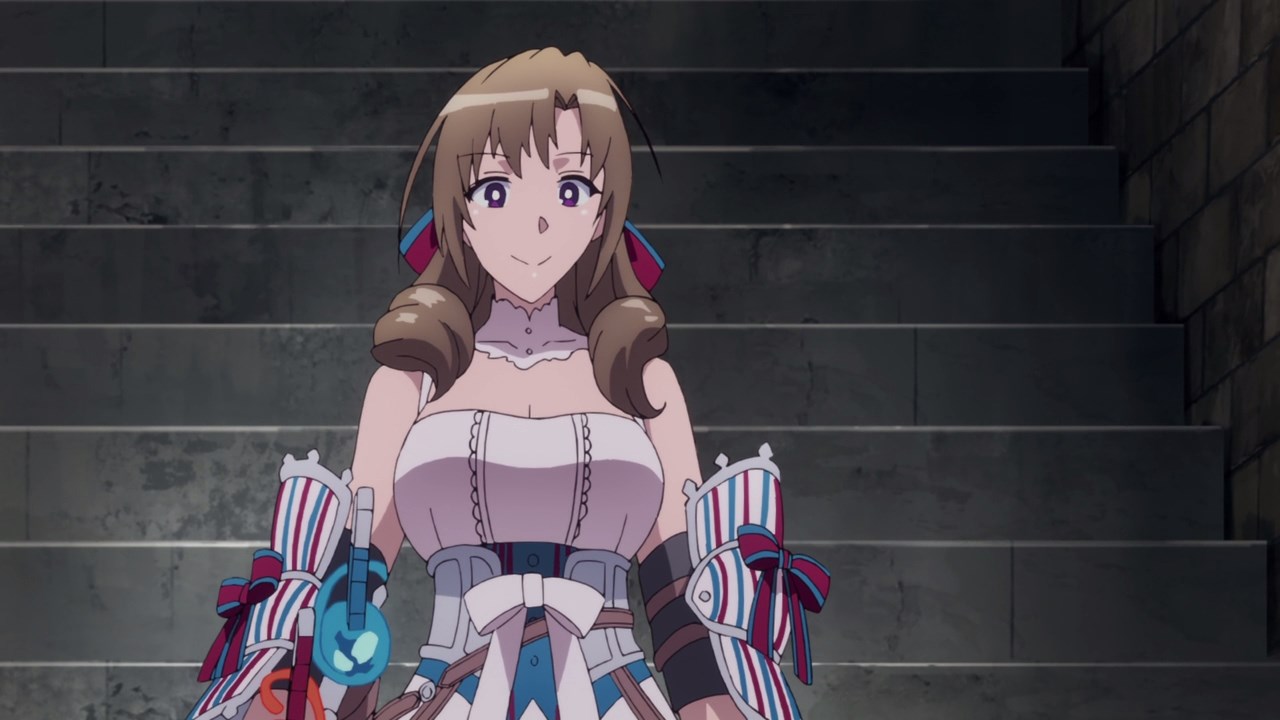 That’s right, it’s the real Mamako Oosuki as she doesn’t like her evil clones tormenting her son! Um Mamako, I think you should take Masato to the next floor as quickly as you can. 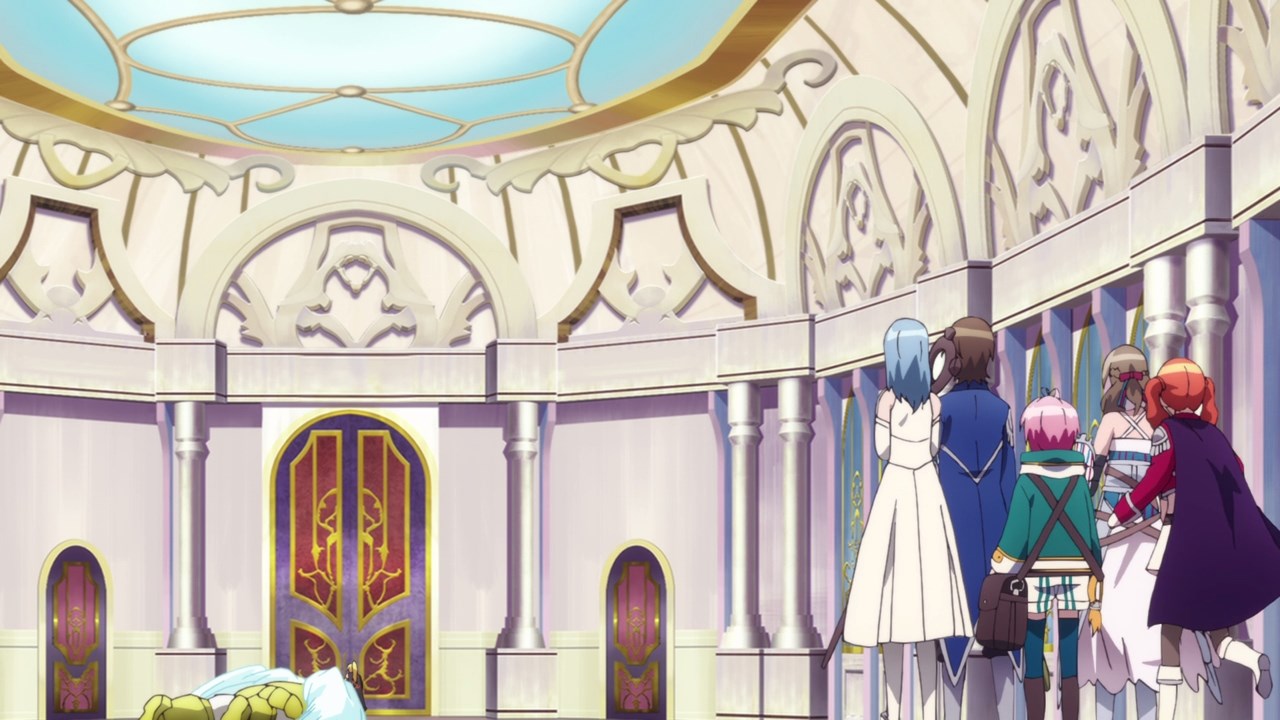 Anyways, Mamako and Masato have finally reunited with their party members as they reached the penultimate floor. Unfortunately, the final boss is already defeated by someone else! 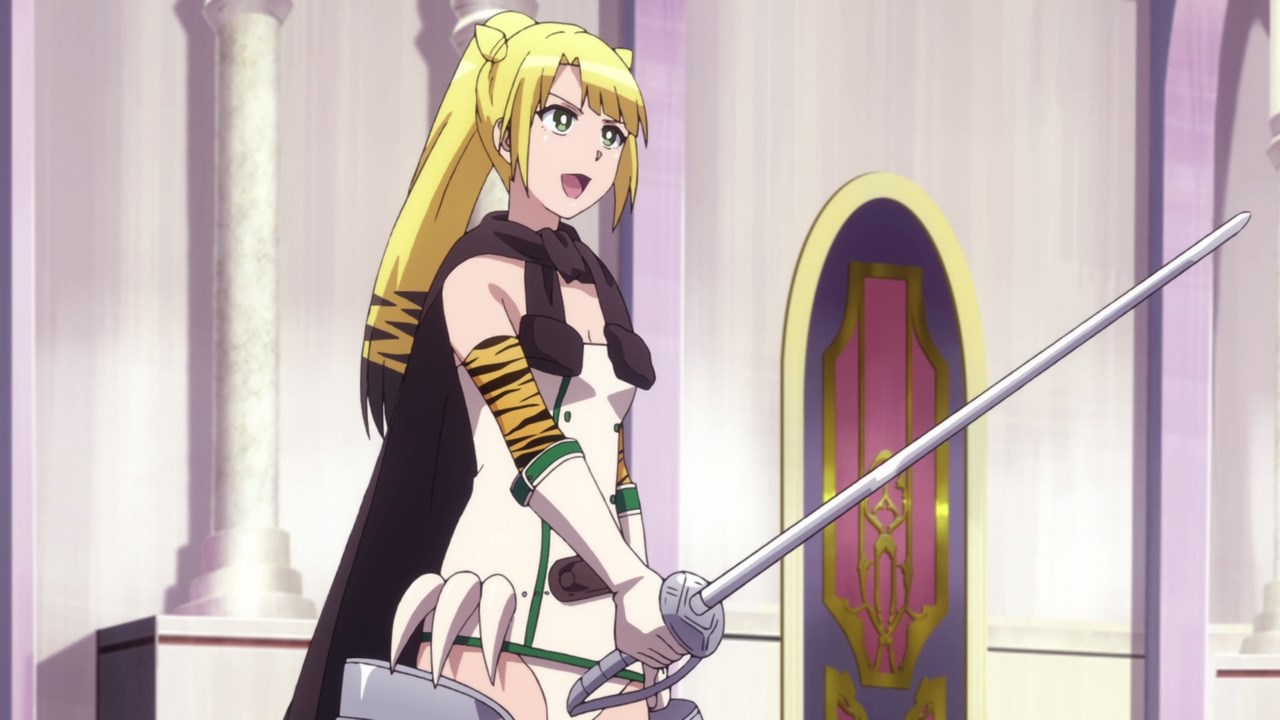 Someone like Amante as the Betrayer of Mothers is about to climb the top of the tower, but she can’t open the door leading to it.

Instead, she decides to spend her time fighting Mamako Oosuki and her party. Then again, I’m sure that Mamako’s party will have easy work against Amante because she’s an idiot! 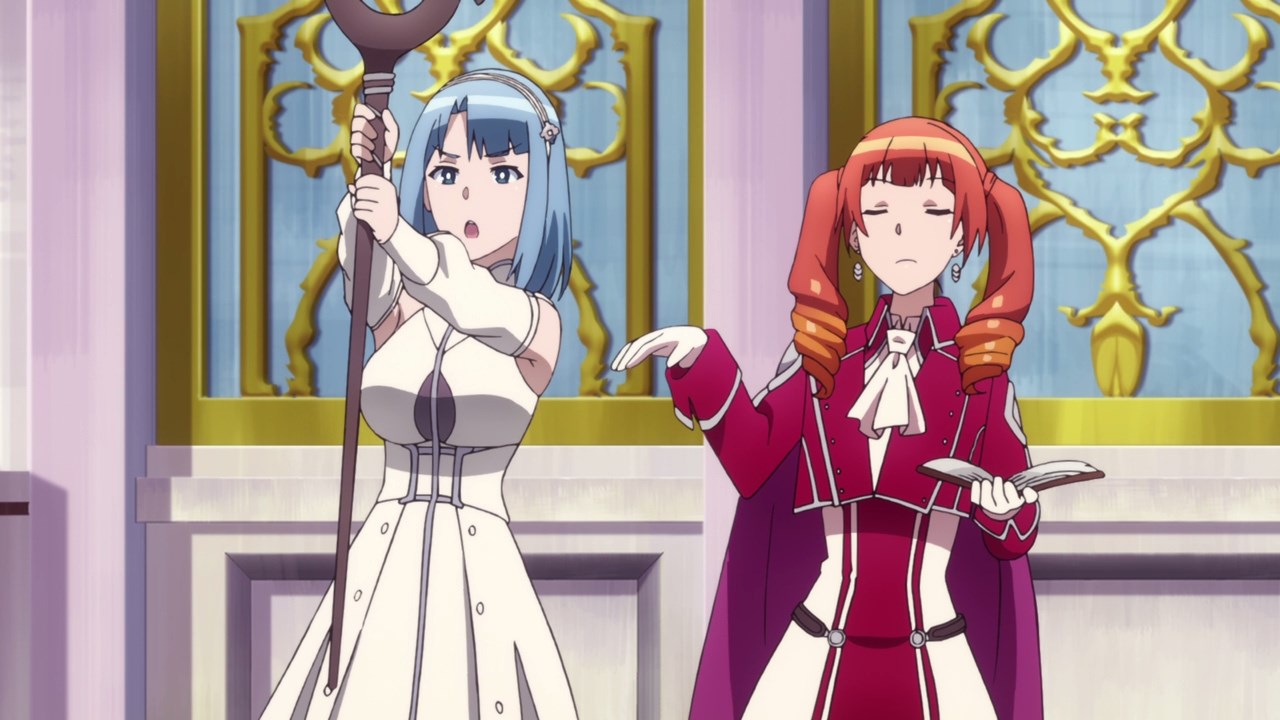 Of course, the problem is who’s gonna make their first move. Well, Medhi will cast a powerful death spell against Amante ’cause she’s far more capable than Wise. 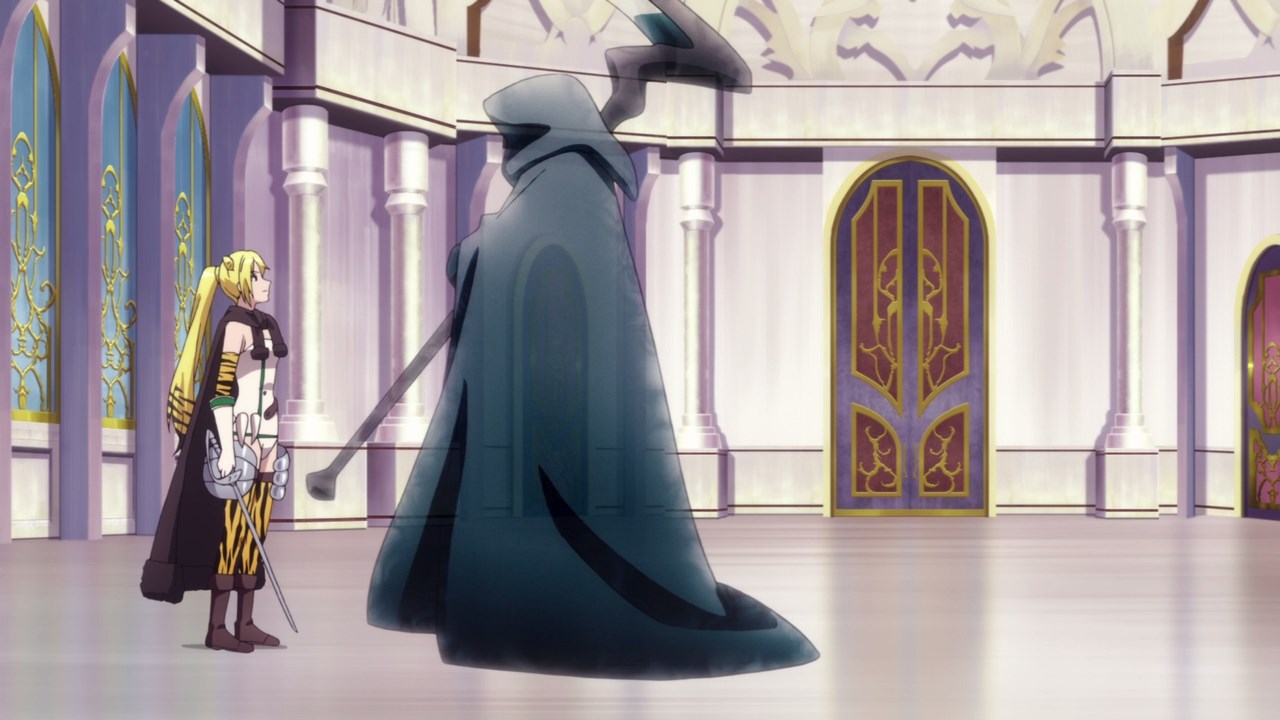 Anyways, it appears that Amante is about to meet her maker as she’s gonna get Kathwack’d! 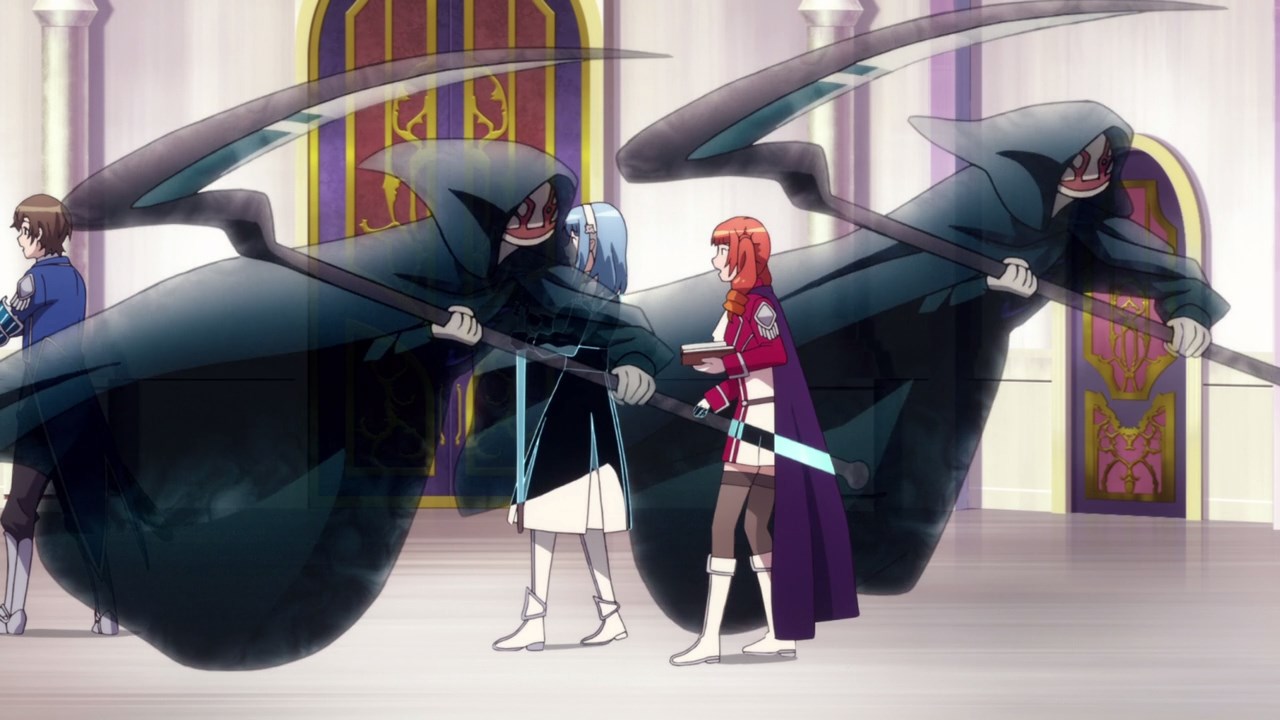 However, Medhi’s death magic has somewhat reflected back at her as well as Wise. Yeah, both of them died in an instant! 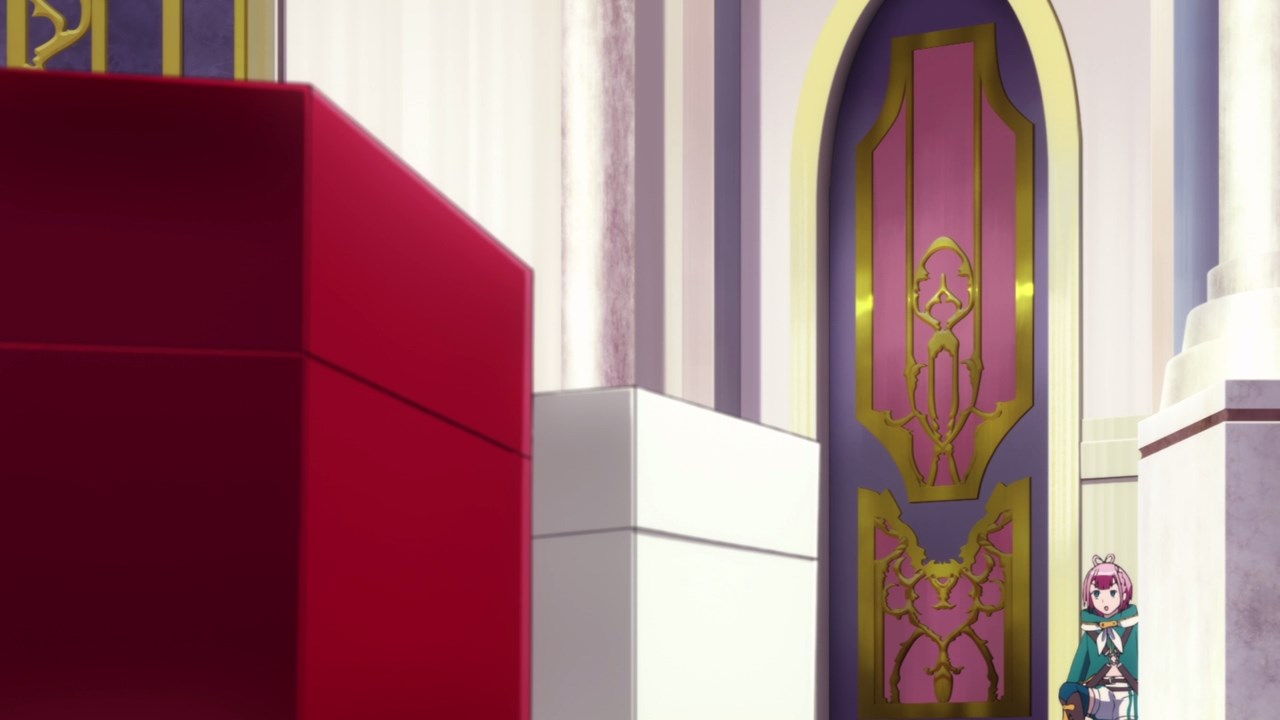 So, it’s time for Porter to save Medhi and Wise with a revival item. Man, I can’t believe that Medhi’s most powerful spell got backfired! 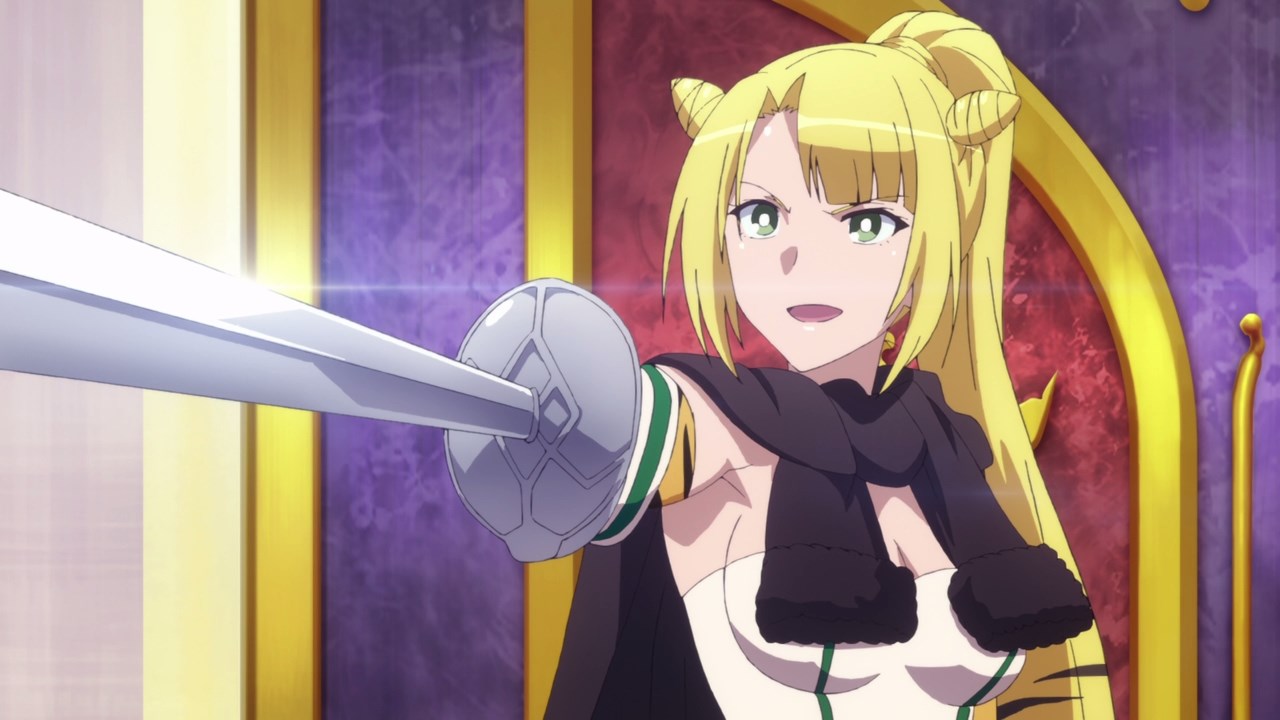 Now then, let’s go back to Amante where it turns out that she has an ability to reflect magic or any other attacks. Then again, I wonder if that includes physical attacks, otherwise Amante will be overpowered.

Speaking of Amante, she told Masato and the rest that they should abandon their mothers because they’re annoying as hell and they took over the spotlight. Oh yeah, and Amante blamed Mamako Oosuki for taking away Masato’s chances to have an exciting adventure in another world! Really Amante, that would be so boring if mothers are removed from this story. 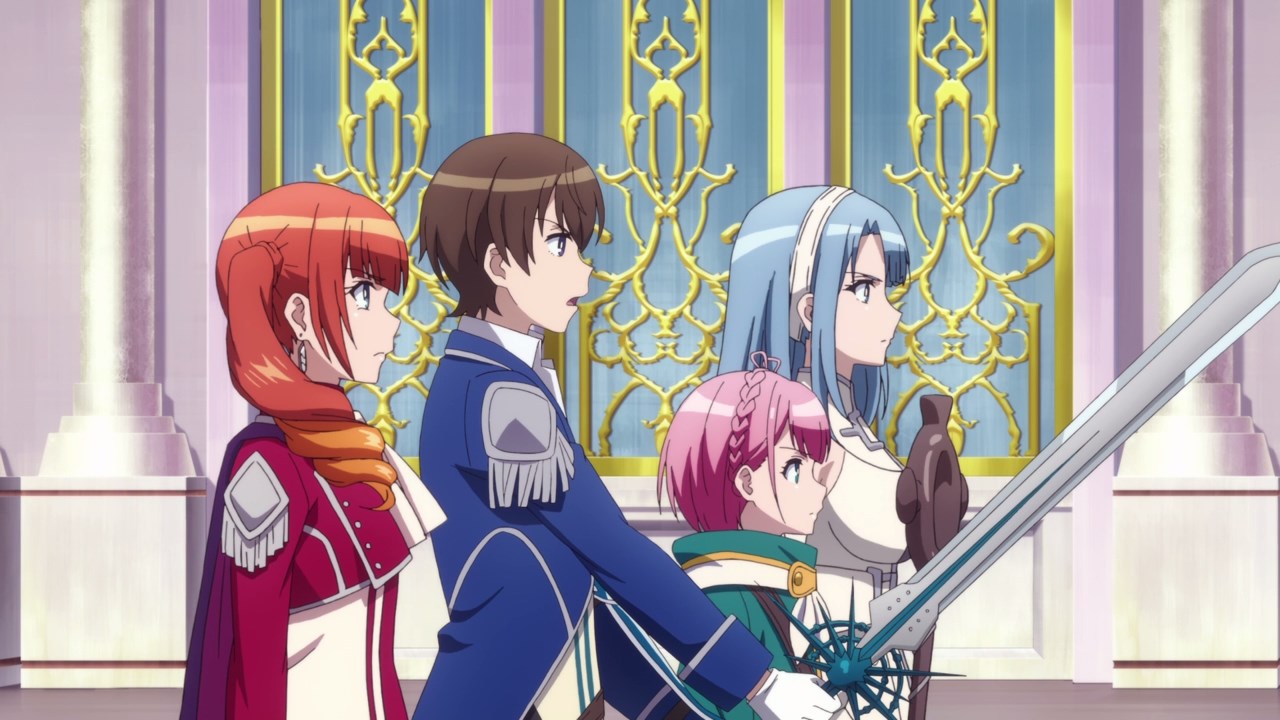 But for Masato Oosuki and his peers, they disagree because despite being obnoxious, they still care about their respective mothers. Then again, I wonder when will Porter’s mother show up?

So yeah, they refuse to abandon their mothers in which Amante got really angry! 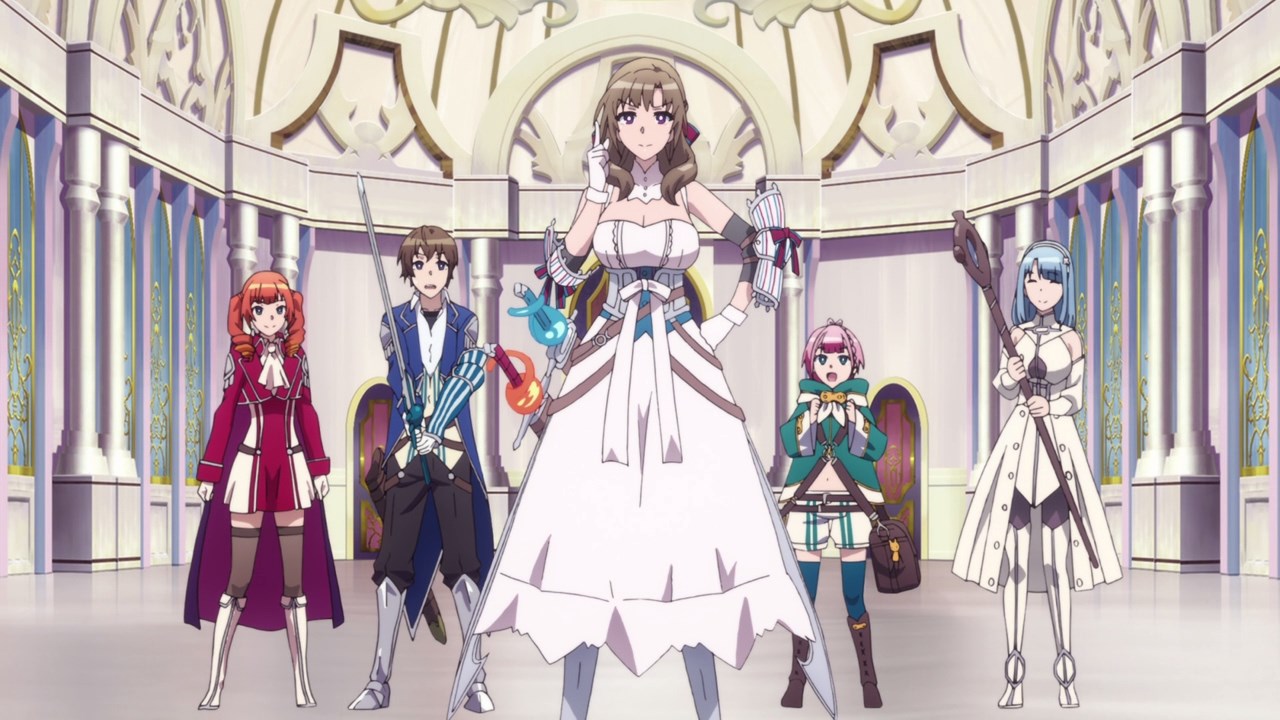 But you know what, I think the Betrayer of Mothers will have a bit of a scolding from Mamako Oosuki as she’s really upset that Amante hates mothers. Then again, I wonder if Amante has a mother since you can’t enter this MMORPG without one? 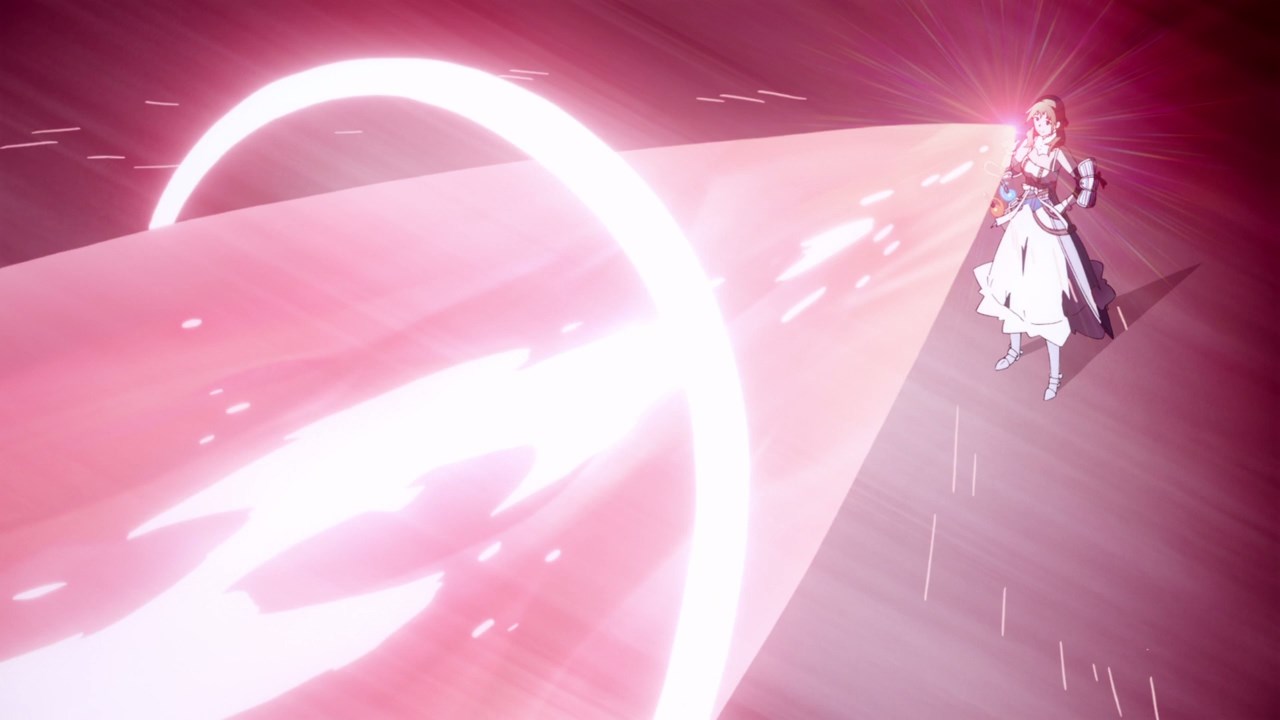 Anyways, looks like Mamako Oosuki will save the day as she fired a powerful beam from her finger. Wait, is she channeling Frieza!? 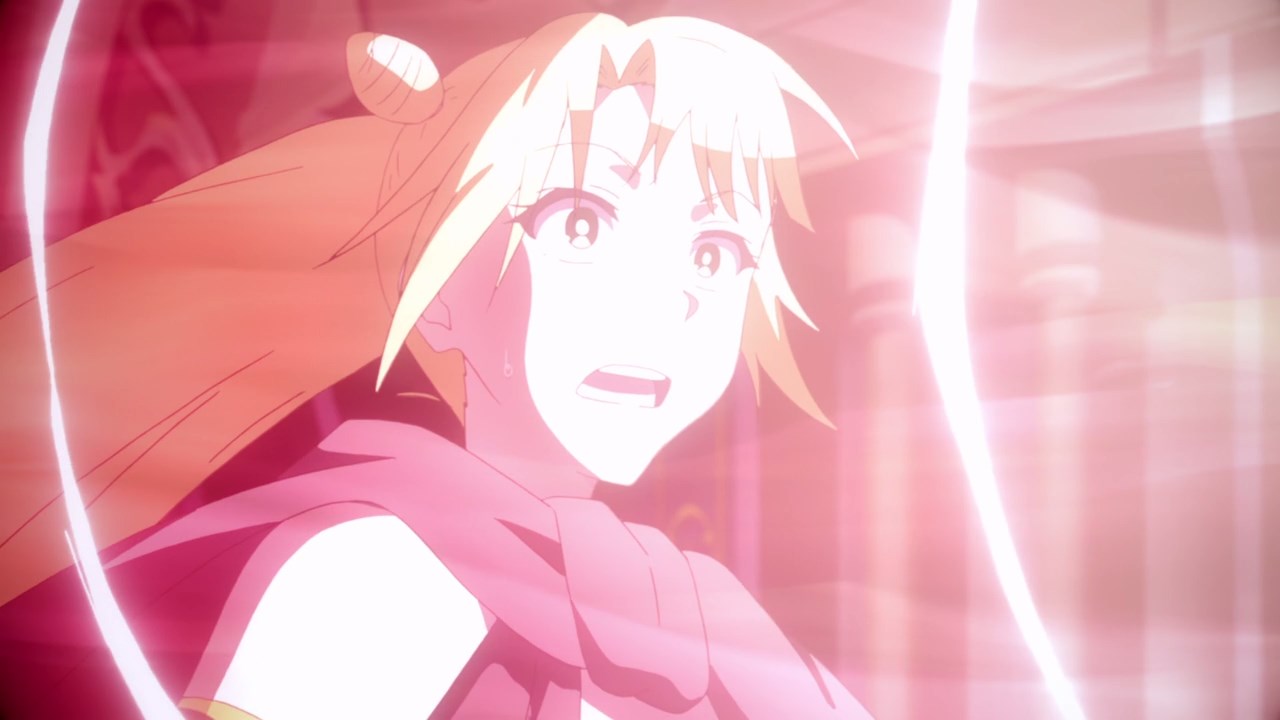 Of course, Amante’s reflect ability will send it back to Mamako… except that it didn’t happen because Mamako’s scolding beam ignores her ability. 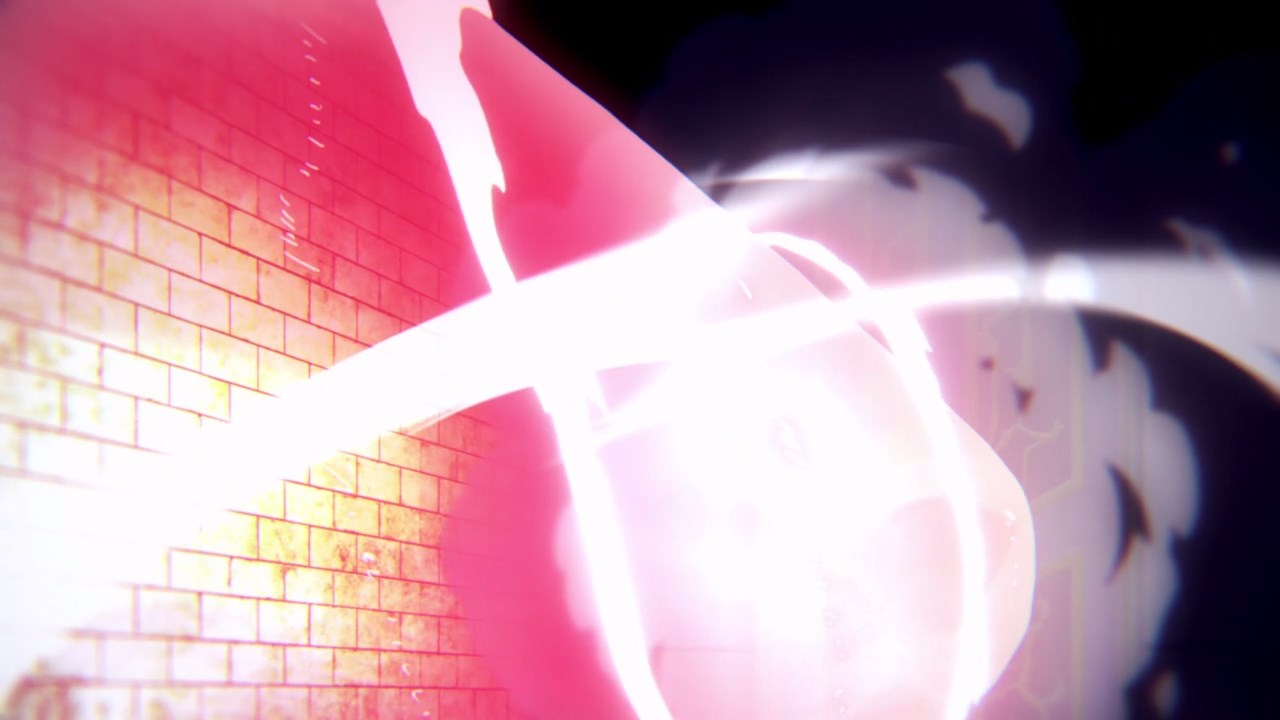 And so, Mamako’s beam has not only burn Amante to a crisp, but creates a giant hole towards the door leading to the top of the tower. 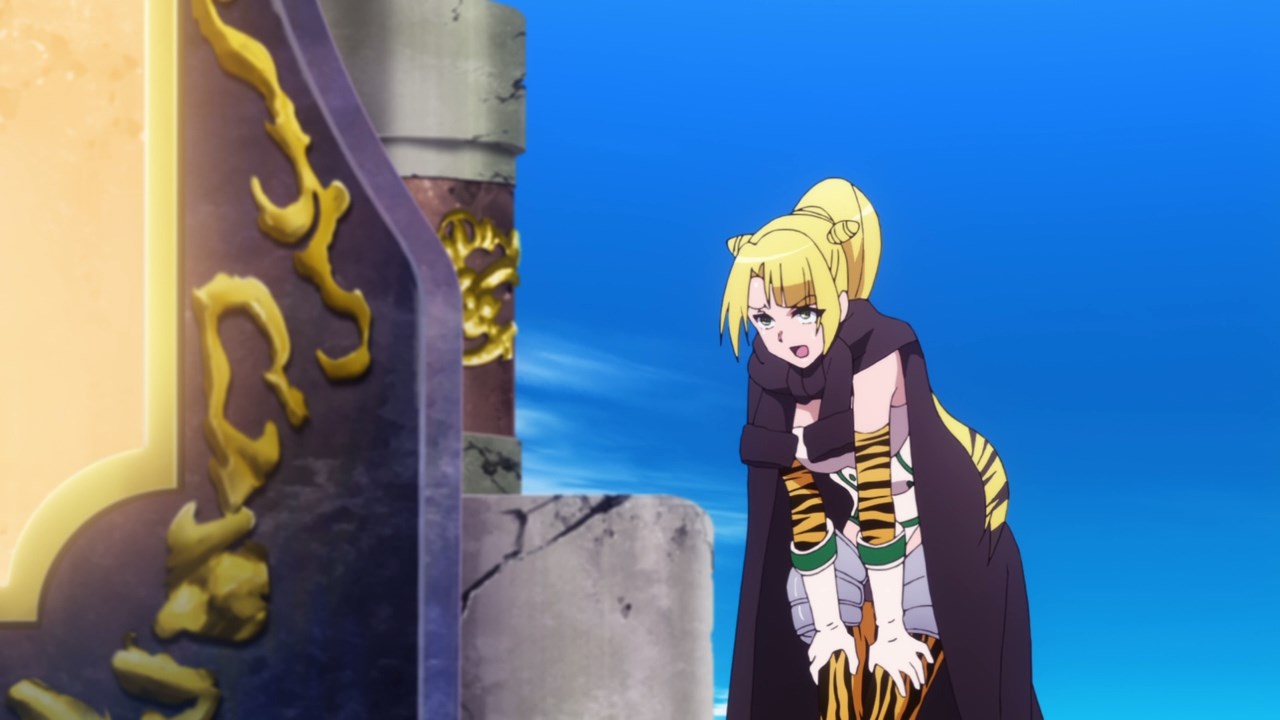 Unfortunately thanks to Mamako’s ultimate attack, this gives Amante an opportunity to climb to the top floor that the door is busted, and then finally make a wish where all mothers cease to exist. Dammit, somebody stop this mad woman! 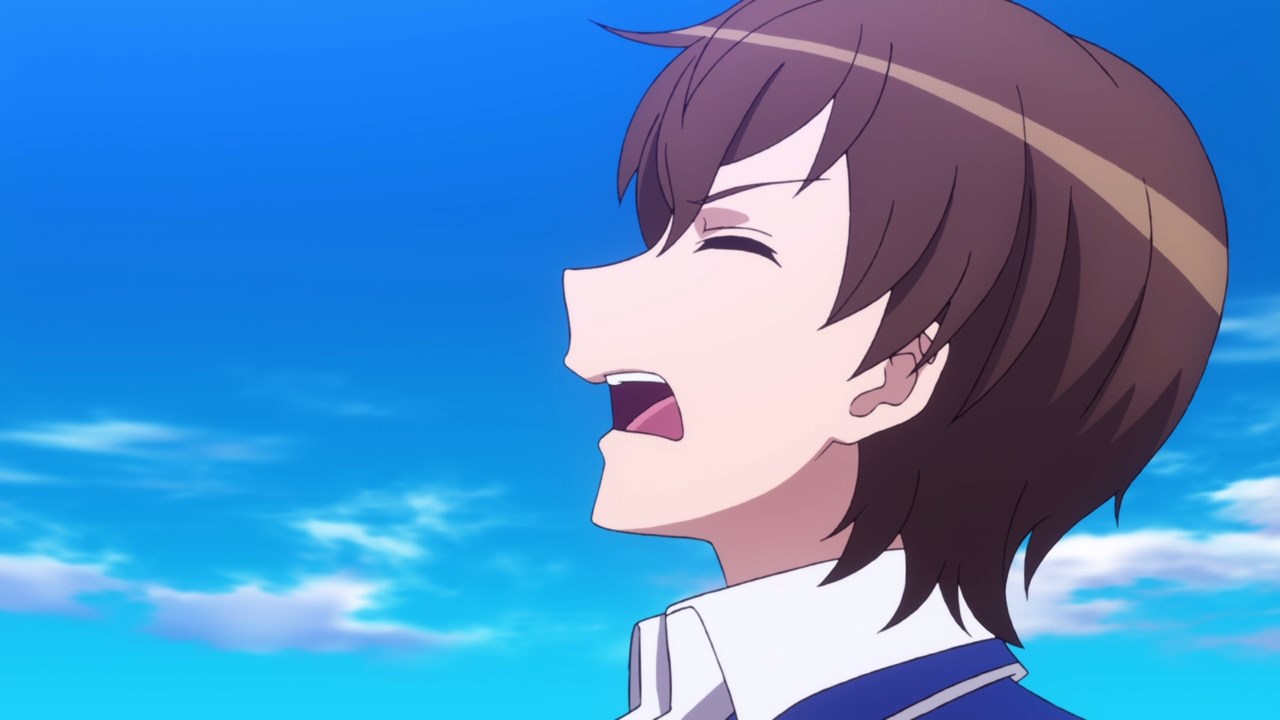 But you know what, I think Masato should come up a wish that would counter Amante’s wish, like wishing to have a yearly supply of eggs! Then again, Masato Oosuki thinks that his silly wish won’t happen… 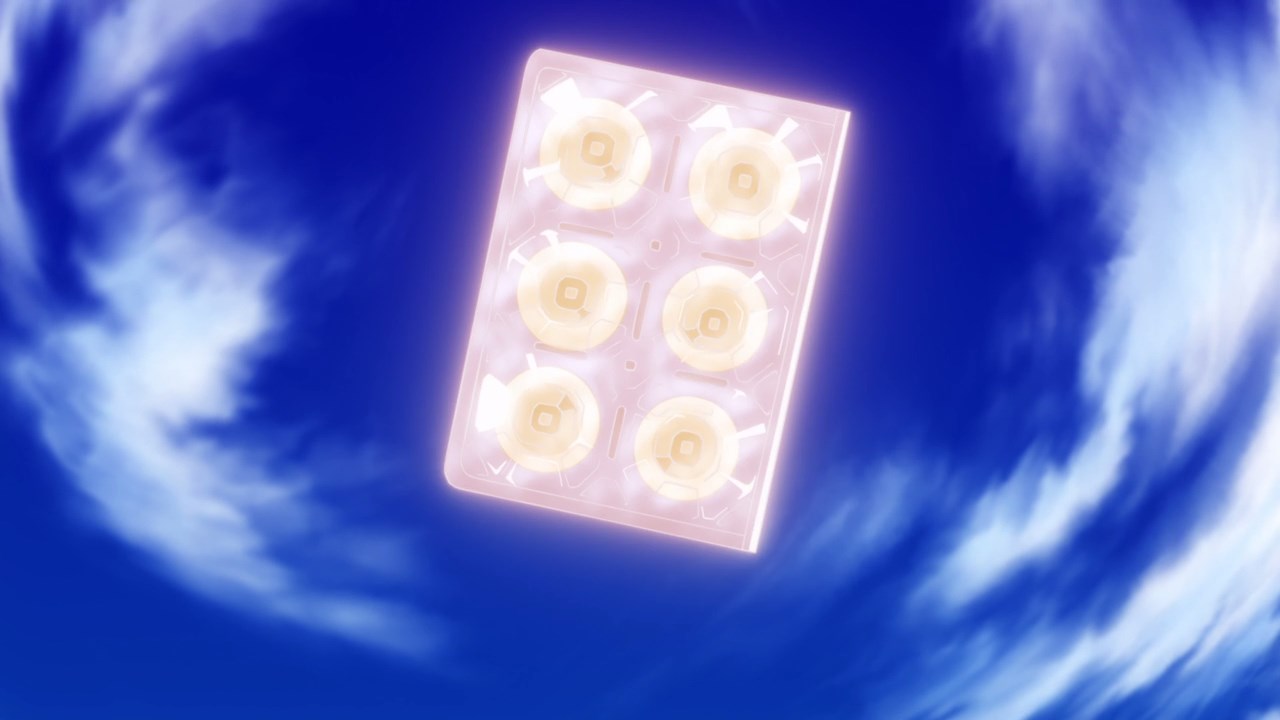 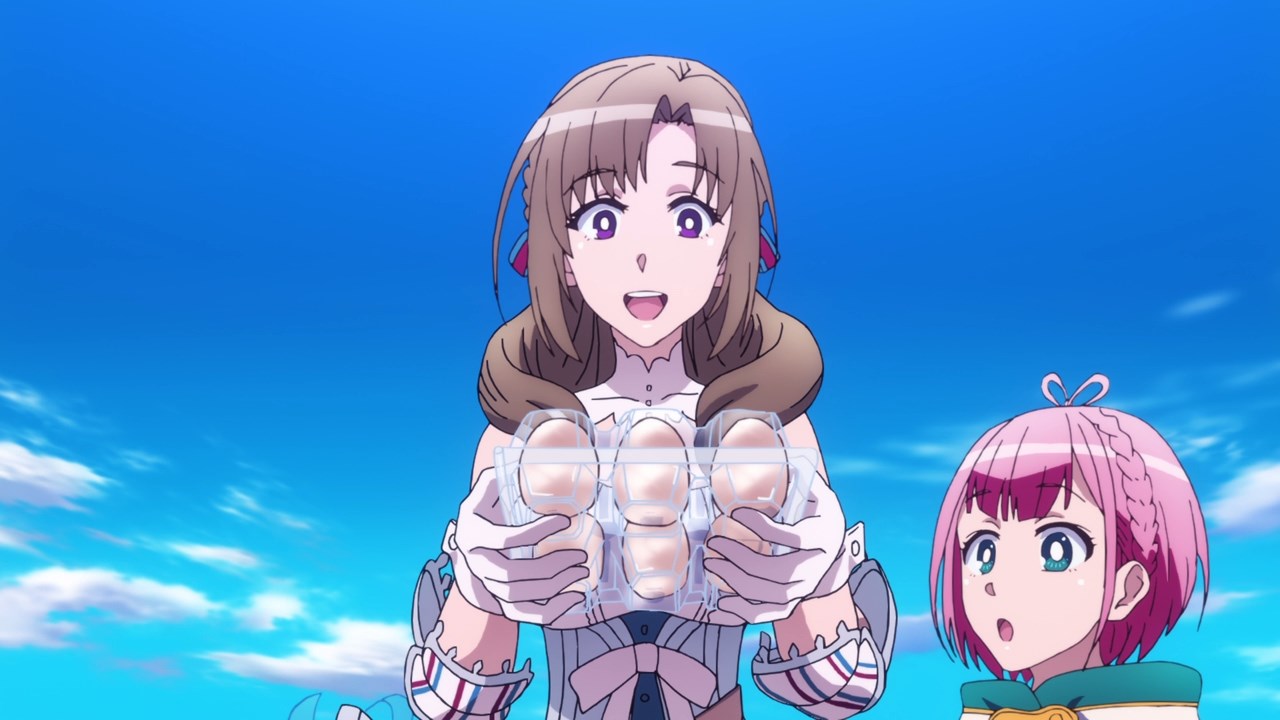 Scratch that, it appears that Masato’s silly wish has finally come true. Now, it’s raining eggs in which Mamako Oosuki is delighted to have a dozen of them! 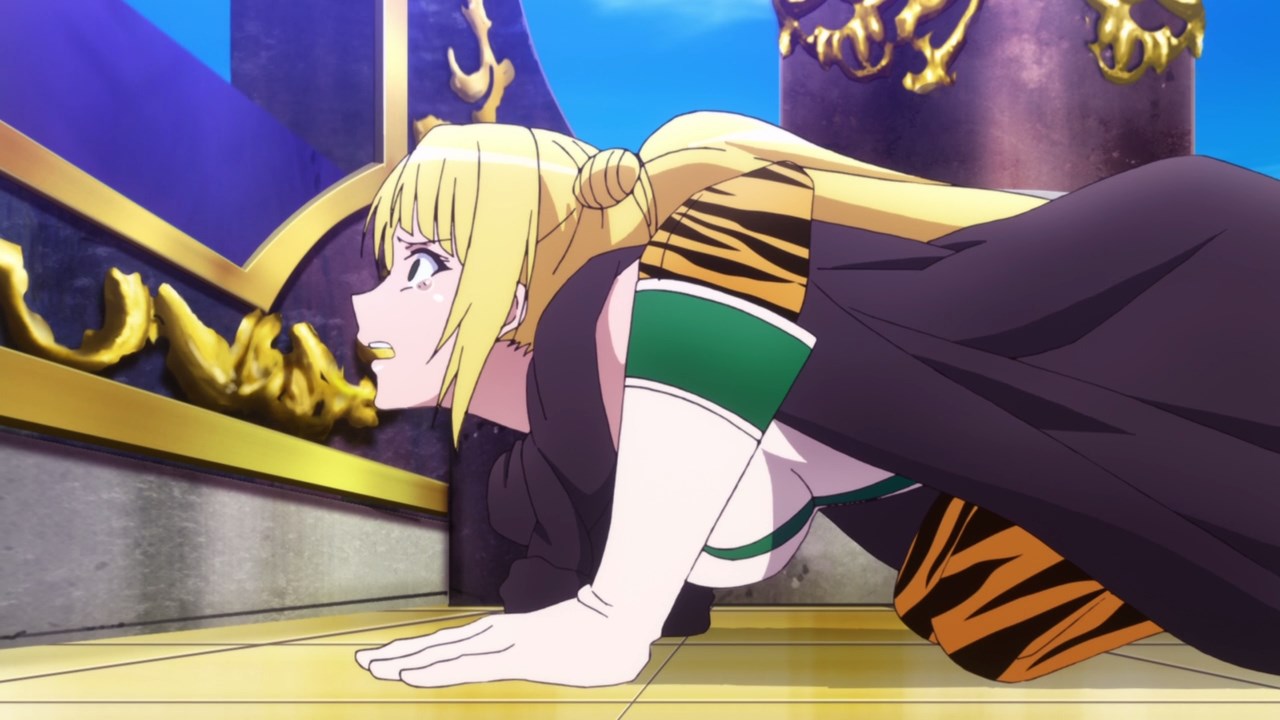 But as for Amante, her dreams of having a world without mothers has been crushed thanks to a silly wish from Masato Oosuki. You know, it would be better if he wished to have a pair of Mamako’s panties so he can sniff it. 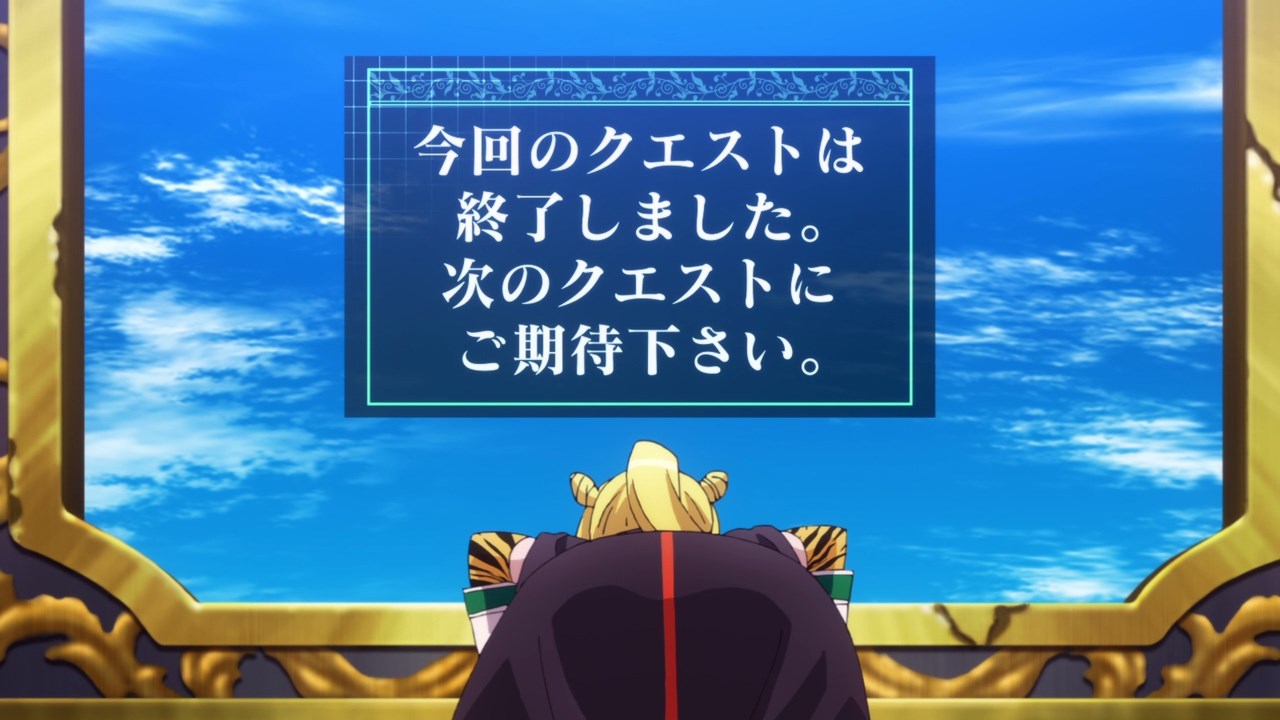 And so, Mamako Oosuki and her party have finally cleared the tower dungeon. Of course, we have to press “F” to pay respects towards Amante as she’ll have to wait for the next event.

But you know what, I think Amante and Ribele are hardly a threat to this story. Even if Amante is a capable fighter of her own, she failed to accomplish her objective because of her various blunders! 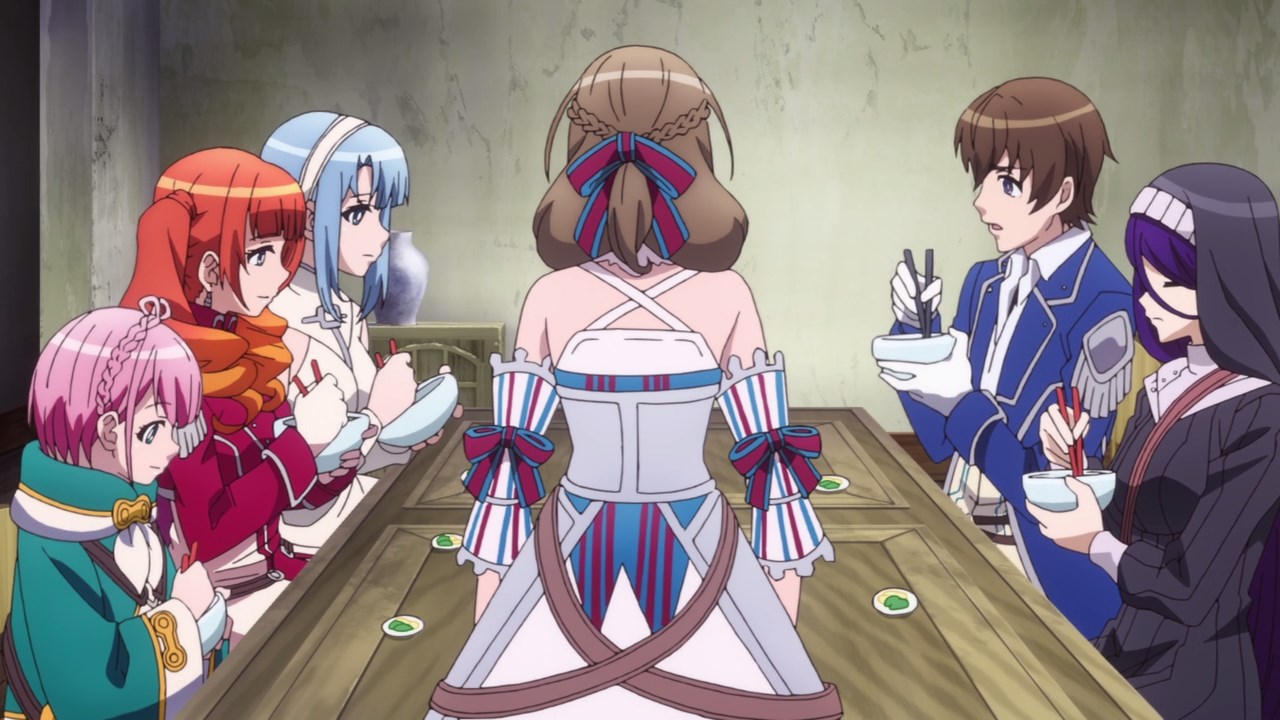 The next day, Mamako Oosuki and her party are eating breakfast together. Gotta put those eggs into good use ’cause it’s their reward for clearing the tower dungeon!

Also, Shirase is here to join them, but she’s not her to just eat Mamako’s home-cooked meal as Shirase wants to discuss something about Amante. 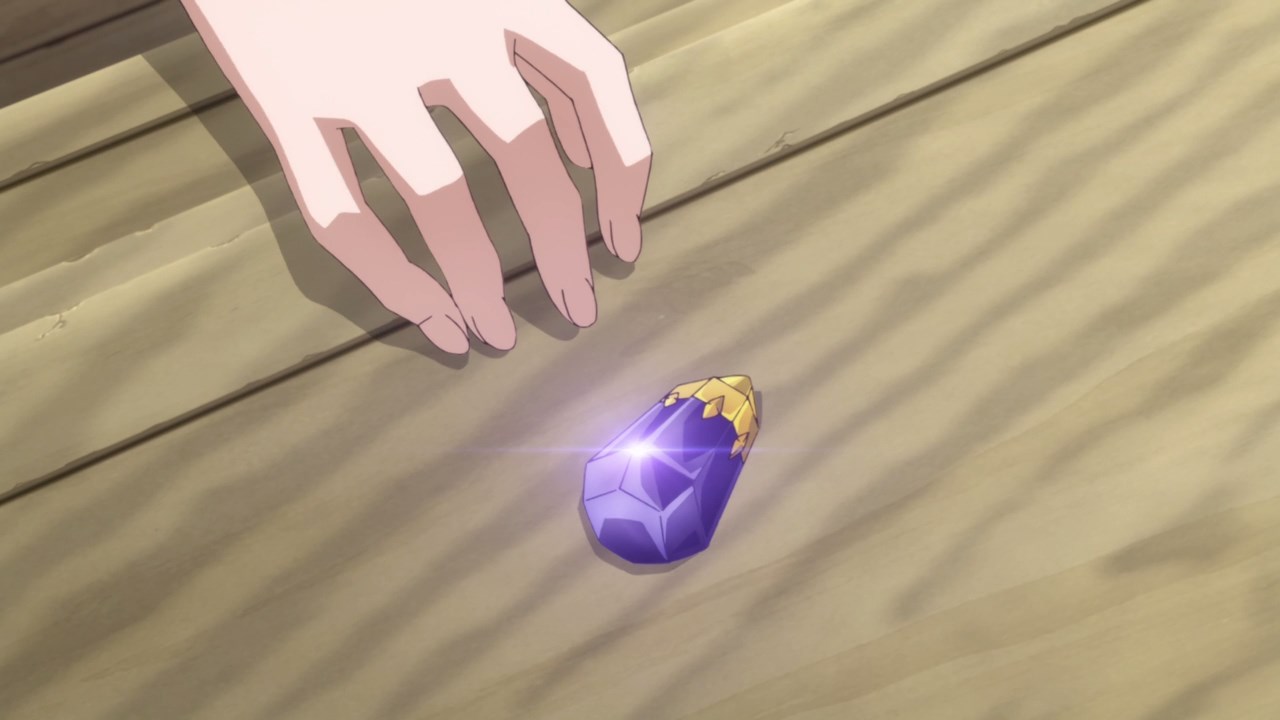 Oh yeah, and Shirase brought this crystal that was used by Wise and Medhi’s respective mothers. Oh, and Amante used that crystal in the previous episode. 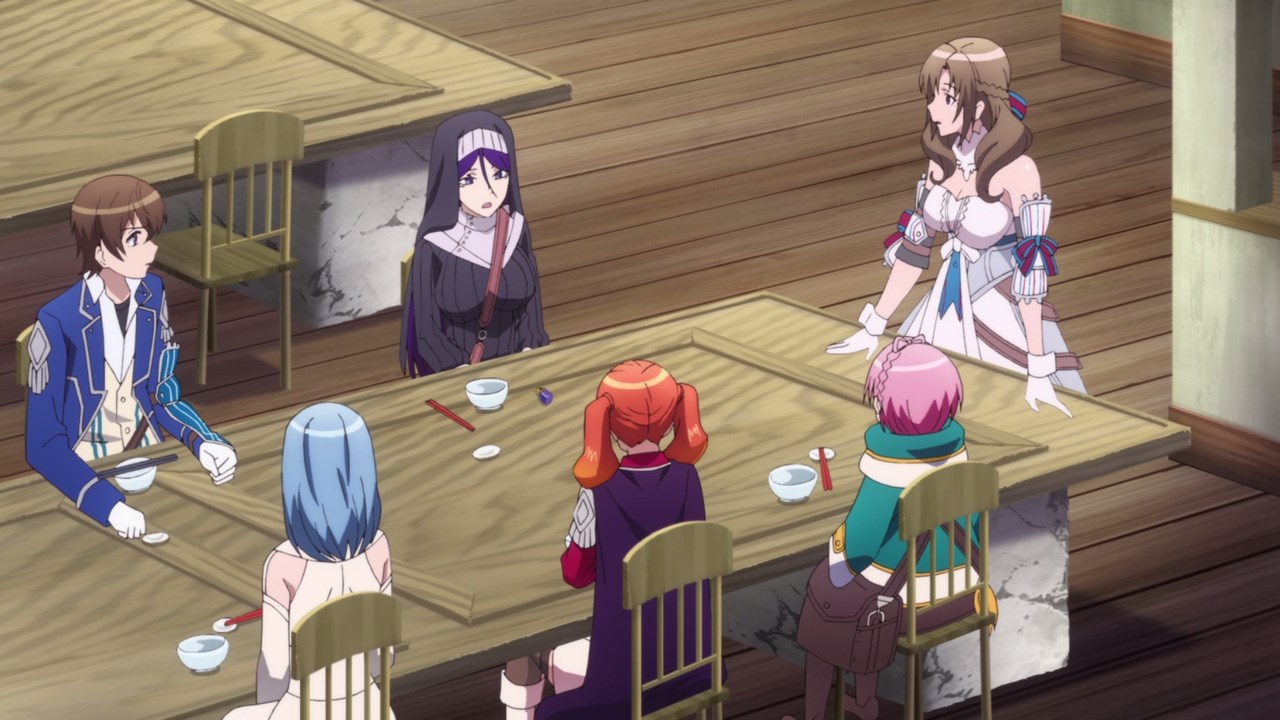 Unfortunately, Shirase couldn’t find the culprit behind these game-breaking crystal which is a shame ’cause I might see the true mastermind.

However, Shirase found some more information regarding Ribele as Amante is not acting alone. In fact, that group has 3 more members that have the same mindset as Amante, although we’ll know who are her allies because we’re reaching the end of this series. 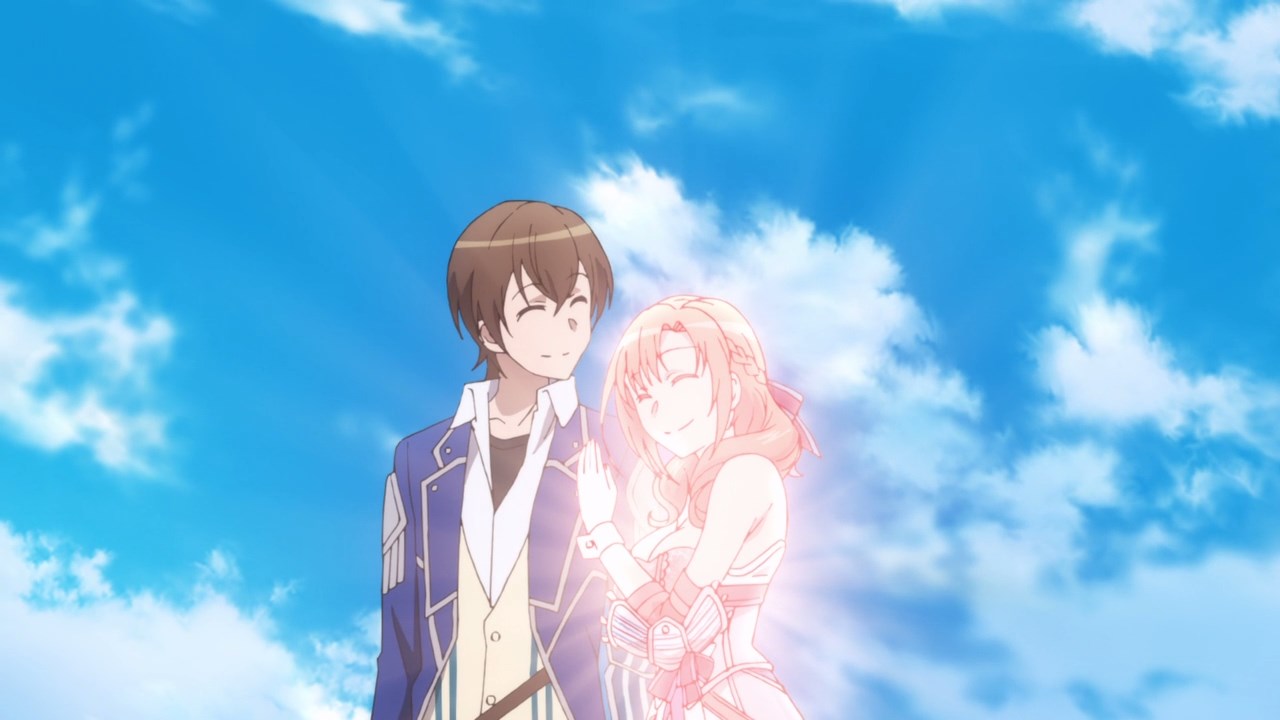 But you know what, I enjoyed watching the Okaasan anime because of Mamako Oosuki, despite the fact that the rest of the show is not that amazing but at least it’s not a trainwreck. I have to take credit on the author for changing the isekai formula a bit a poke fun of it.

Of course, the chances of having another season is quite low, but at least J.C.Staff will make an OVA episode next year. Anyways, time to say goodbye to Masato and Mamako Oosuki as this anime series is finally over!