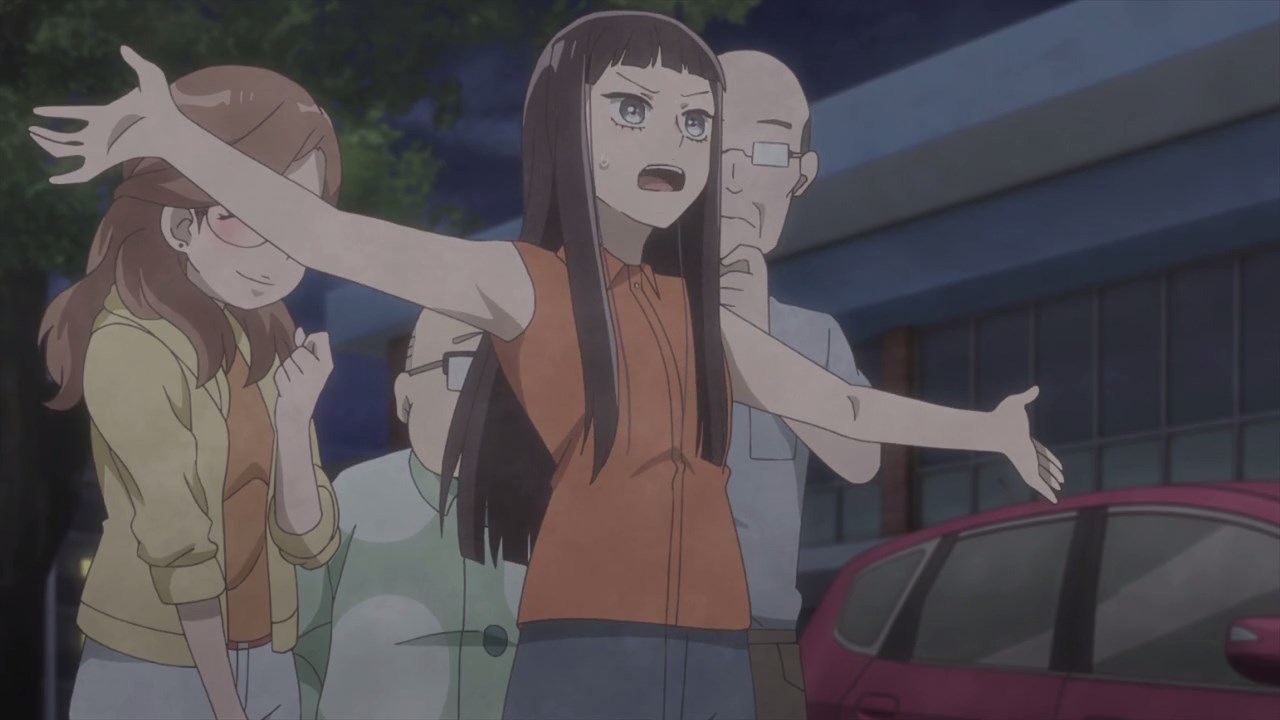 Here it is, the final episode as Rika Sonezaki begs the entire Literature Club to stop this siege at once. 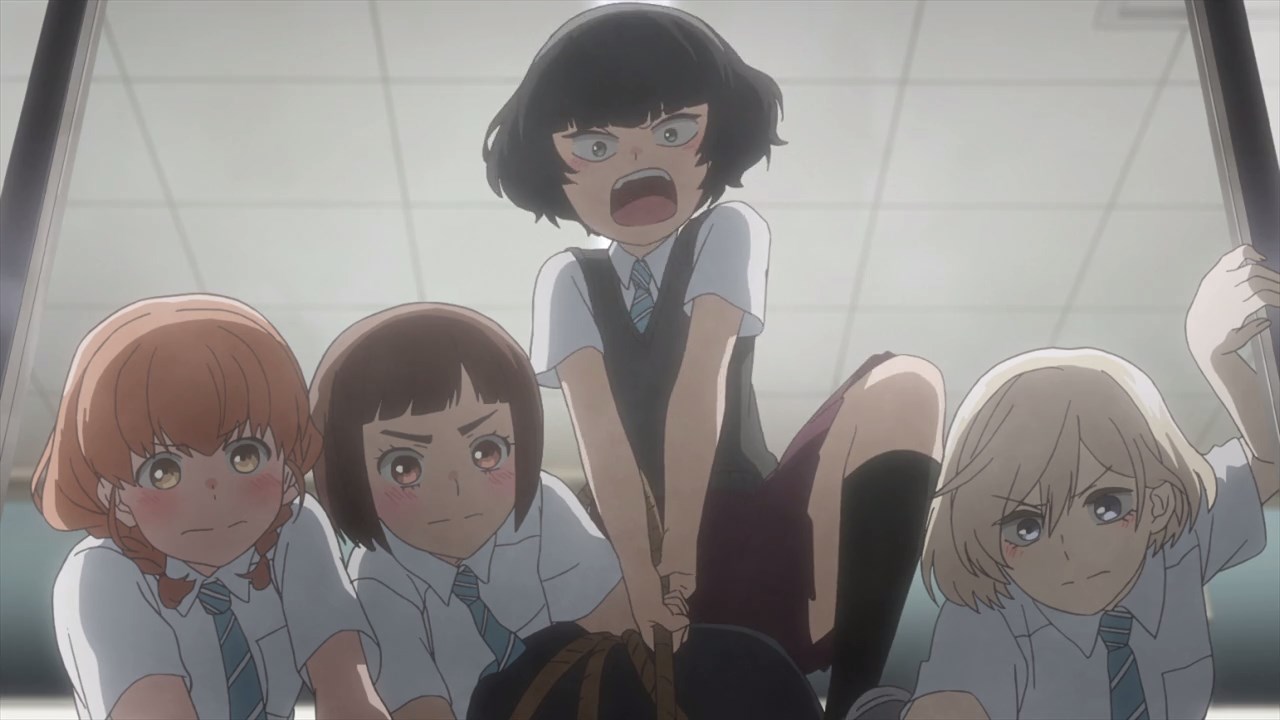 Unfortunately, Hitoha Hongou and the rest won’t stop until Rika Sonezaki and Shun Amagiri are cleared from any wrongdoings, as well as lifting the relationship ban. 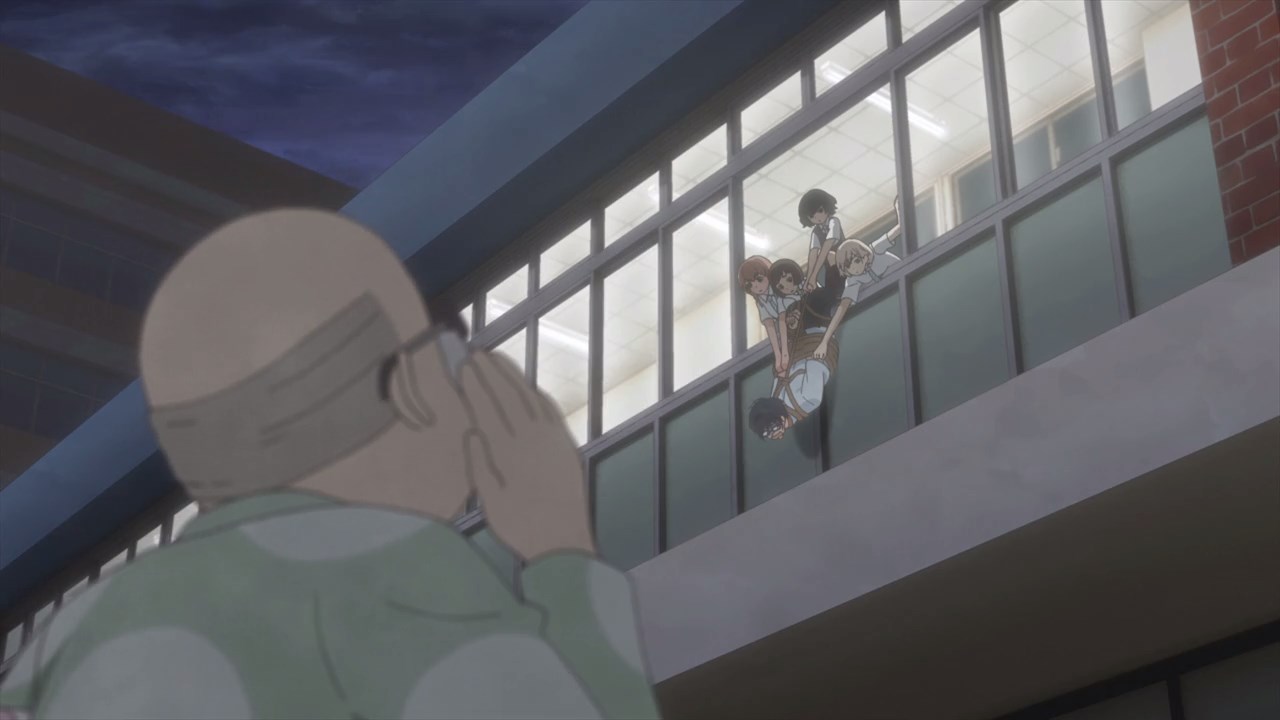 Unfortunately for the Literature Club, the principal and vice-principal realized that today is Friday, which means that they’ll come back tomorrow. Hello, you’re not taking these girls seriously! 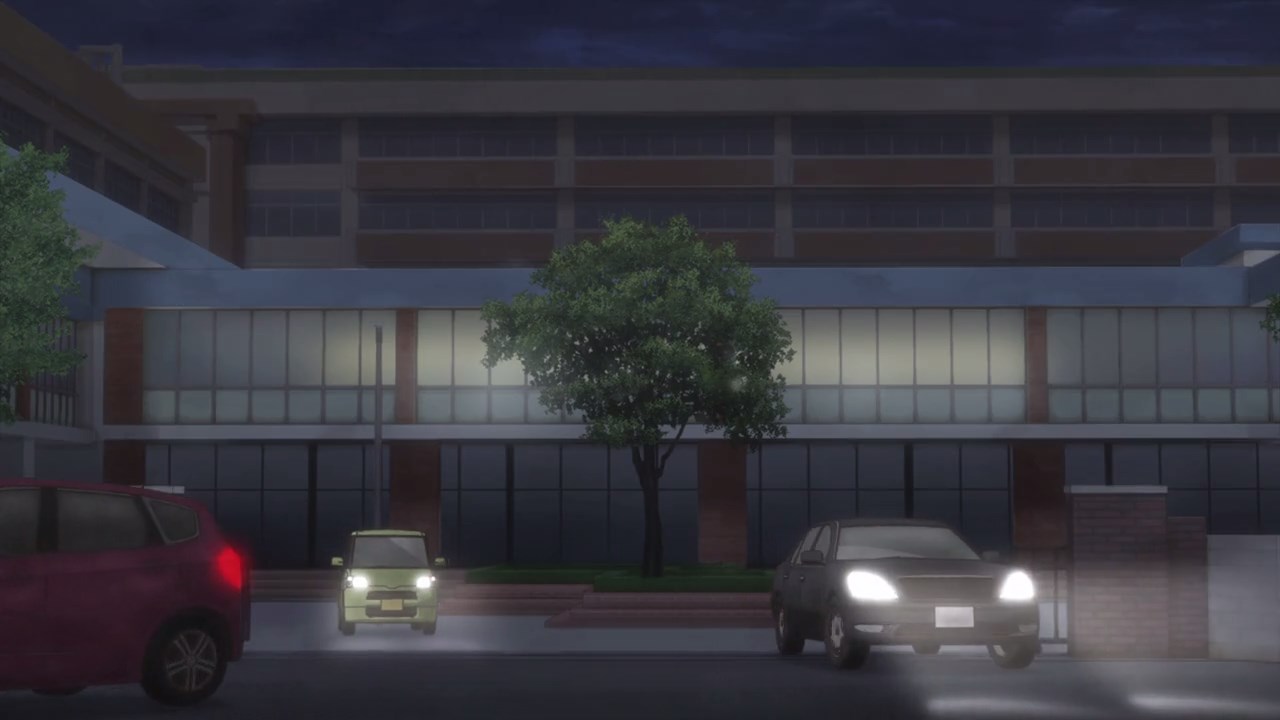 Anyways, the teaching staff left the scene, thinking that the girls will calm down afterwards. Um, I don’t think the girls won’t calm down until their demands are met. 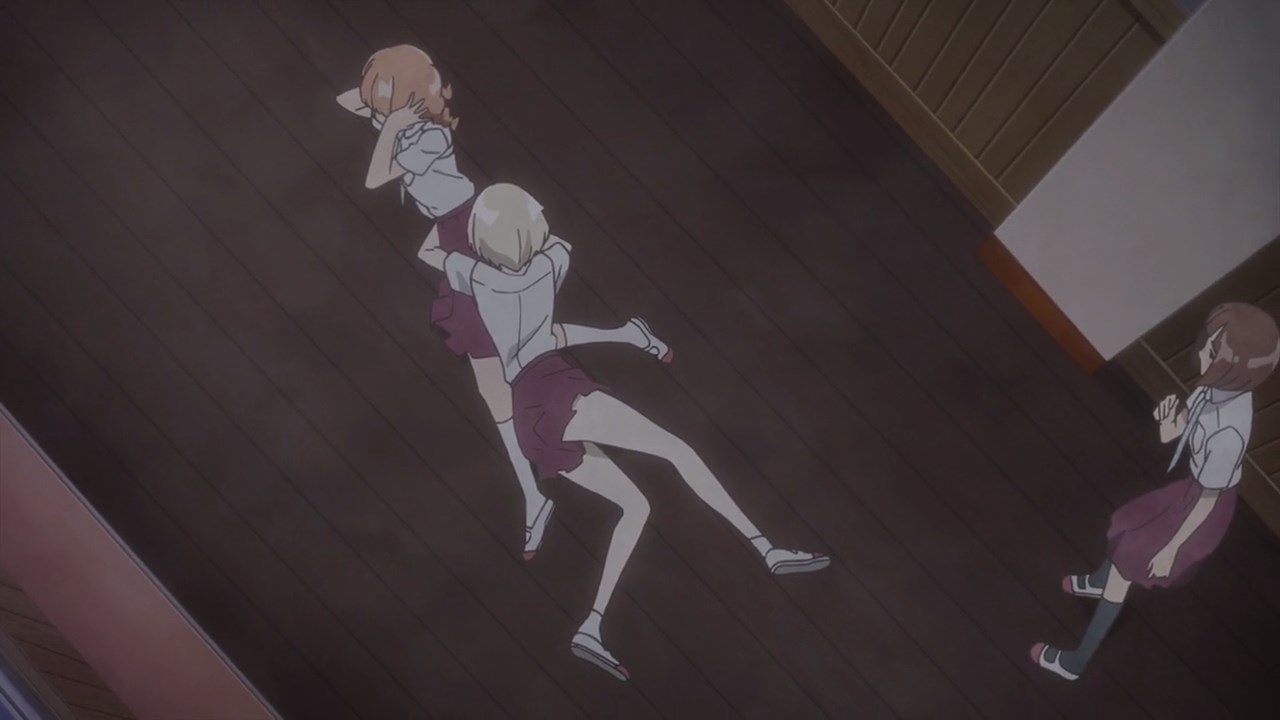 So even though the teaching staff went home, the drama continues where Momoko Sudou still calls Niina Sugawara out for stealing Izumi Norimoto away from Kazusa Onodera.

Also, Sugawara tries to stop Sudou as she really wants to tell how much she felt towards Norimoto, but let’s just say that Momoko won’t let Niina have her way. 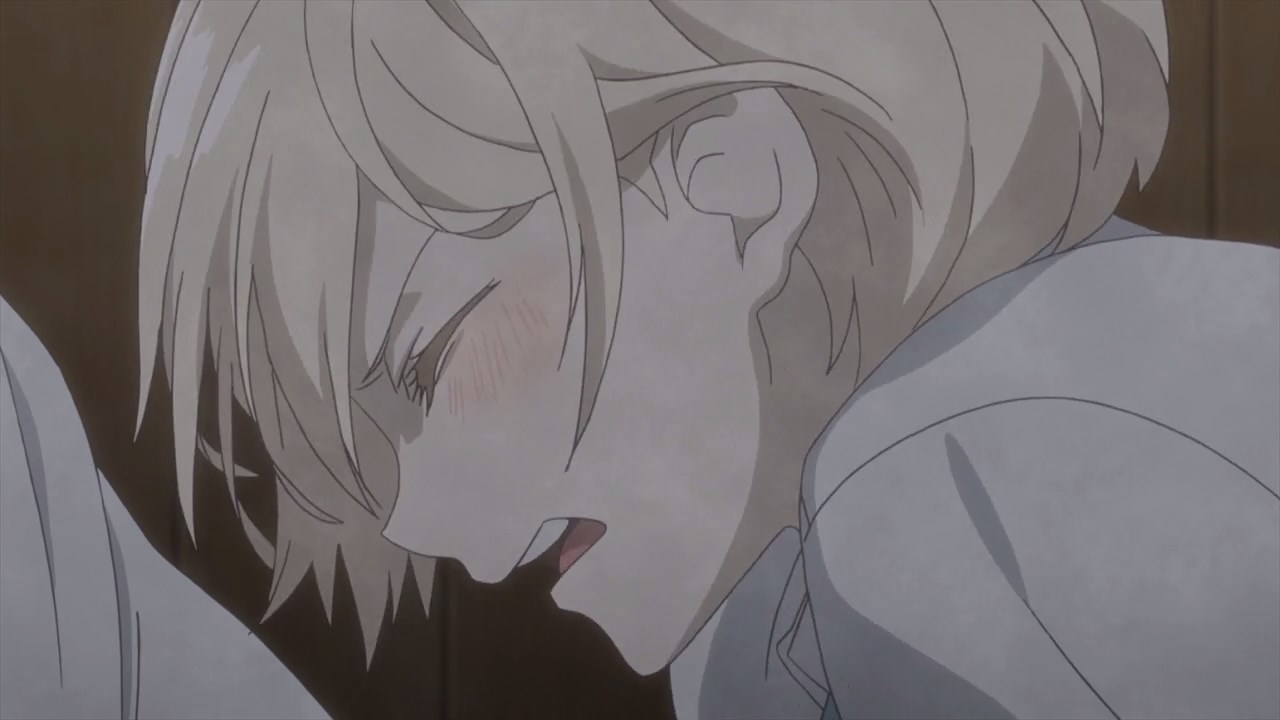 But speaking of Niina Sugawara, even if Izumi Norimoto has Kazusa Onodera as his girlfriend, she still have intimate feelings for him albeit in a sexual way. In any case, Sugawara told everyone that she loves Norimoto! 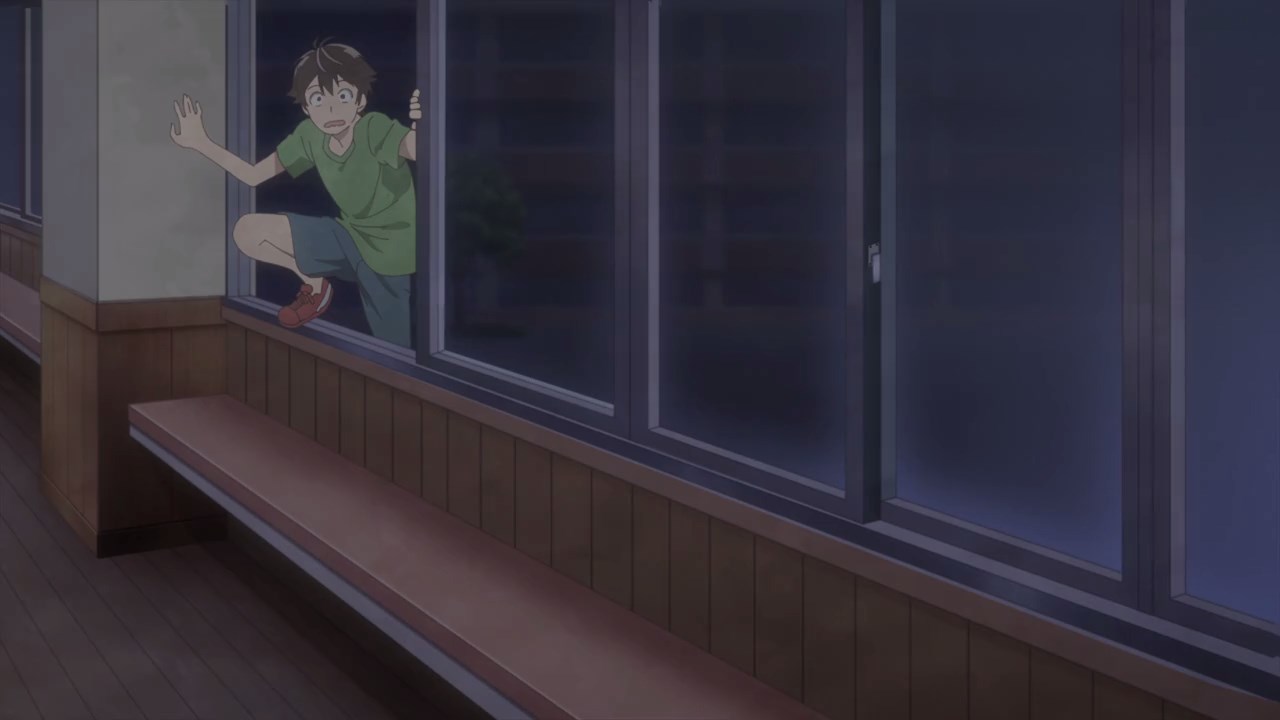 On second thought, I think she should tell her true feelings to Norimoto personally as he arrived… by climbing to the window. Wow, is he freakin’ Spider-Man? 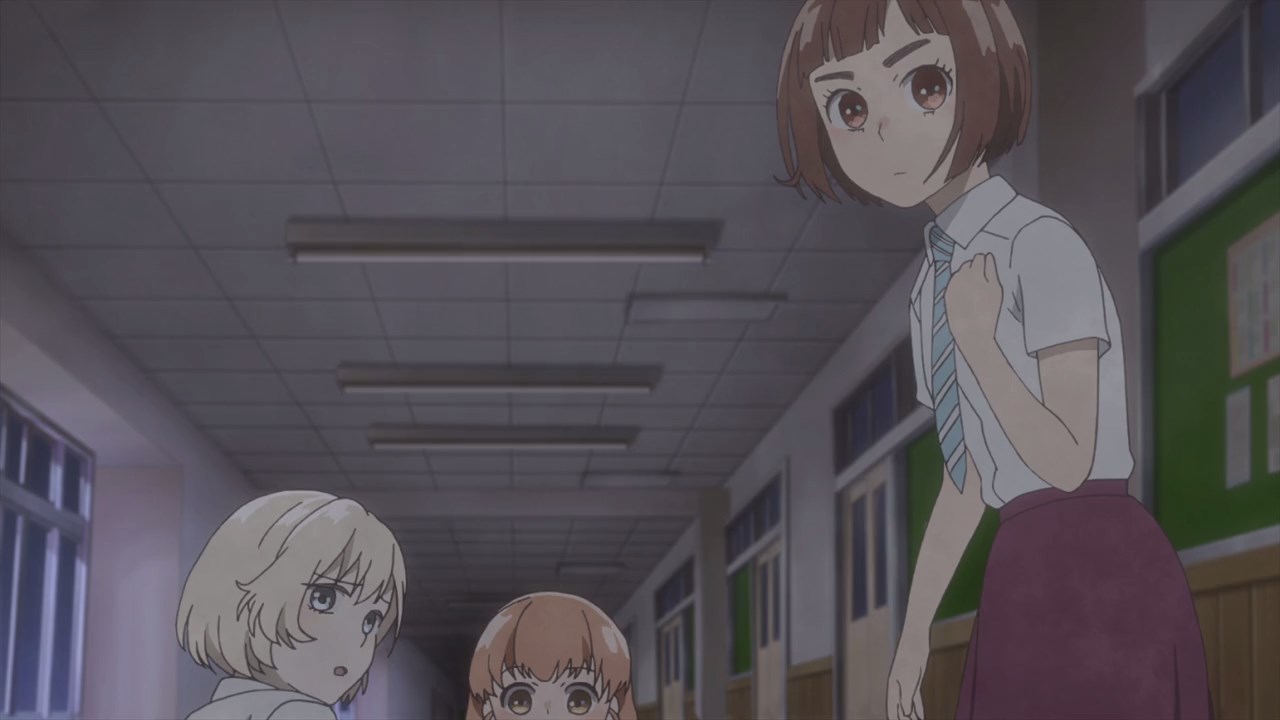 Anyways, the girls are surprised that Izumi Norimoto went inside Tojo High School, but I wanna know what he thinks about Niina Sugawara. 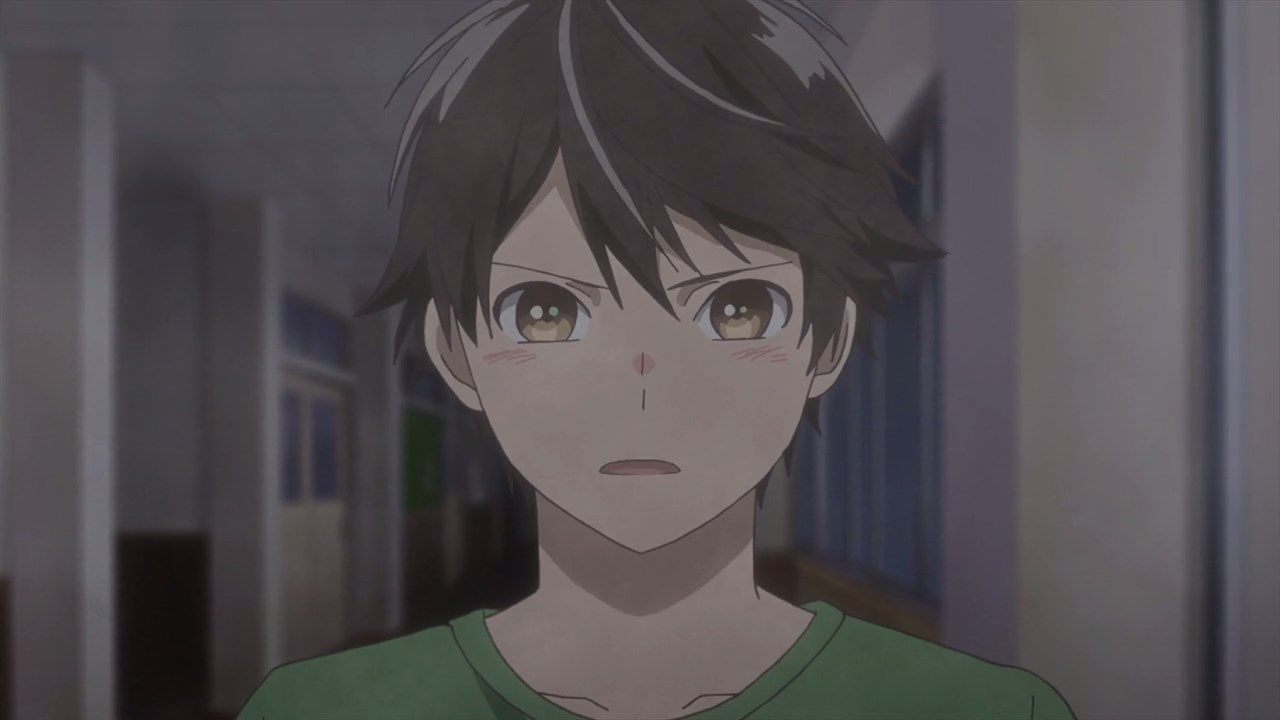 Well, he admits that even though he has feelings for Kazusa Onodera, Izumi is sexually-attracted towards Niina Sugawara.

I mean c’mon, she’s a thing of beauty that every girl is jealous of her, while various boys and creepy men like Hisashi Saegusa are staring at her body with lustful eyes. It’s no wonder why Norimoto got a turn-on when Sugawara flirts with him. 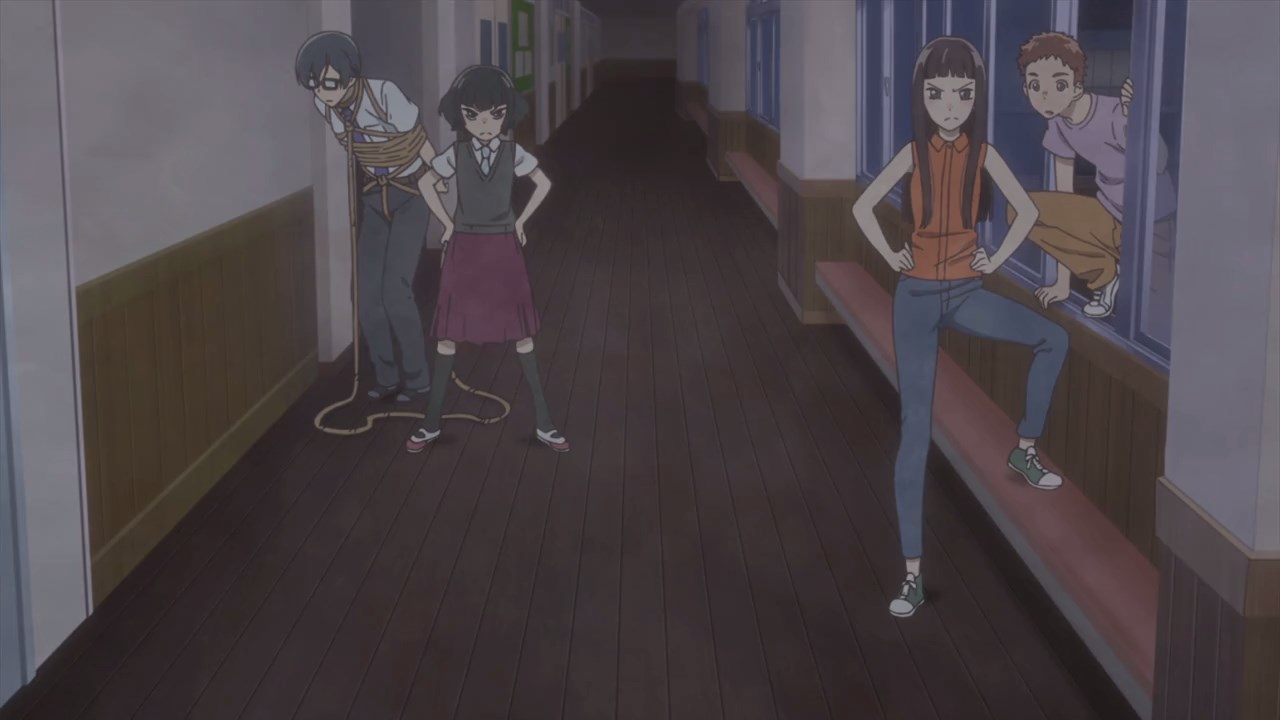 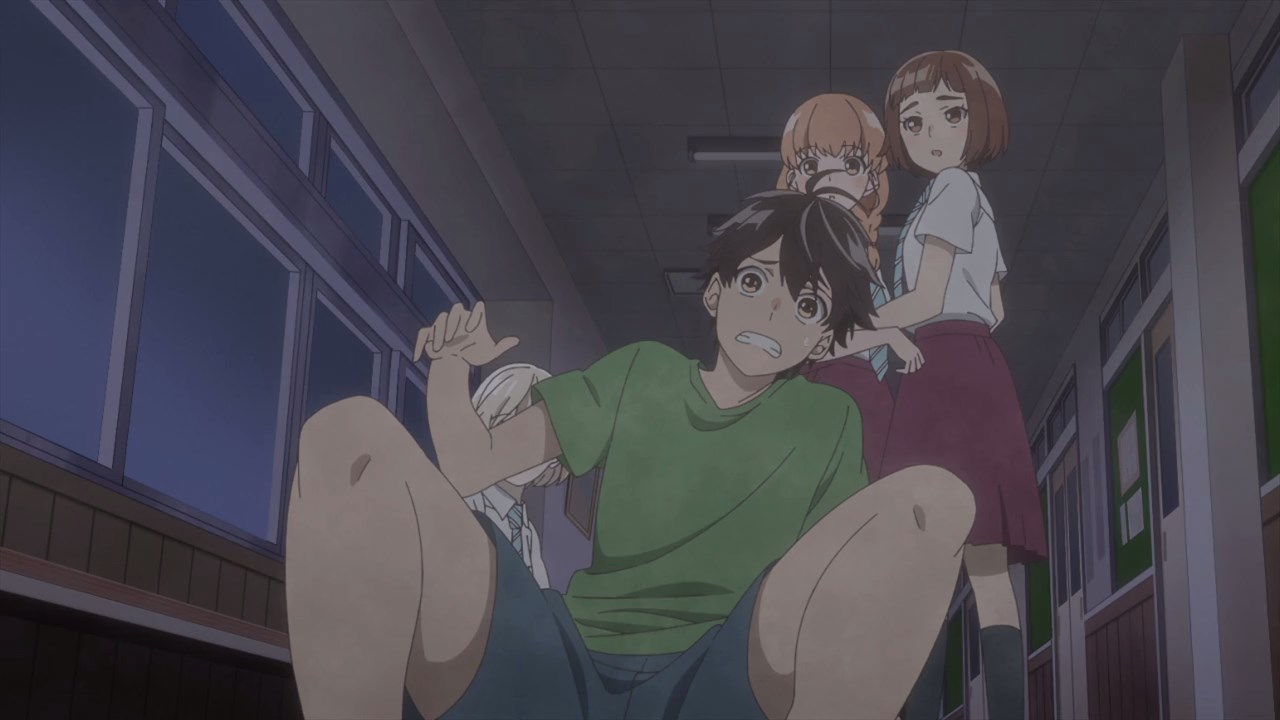 But yes, I have to say that Izumi’s life is ruined forever. Well, not quite because some girls are still attracted towards Norimoto. Besides, those who are inside Tojo High School are the ones who knows Norimoto’s confession. 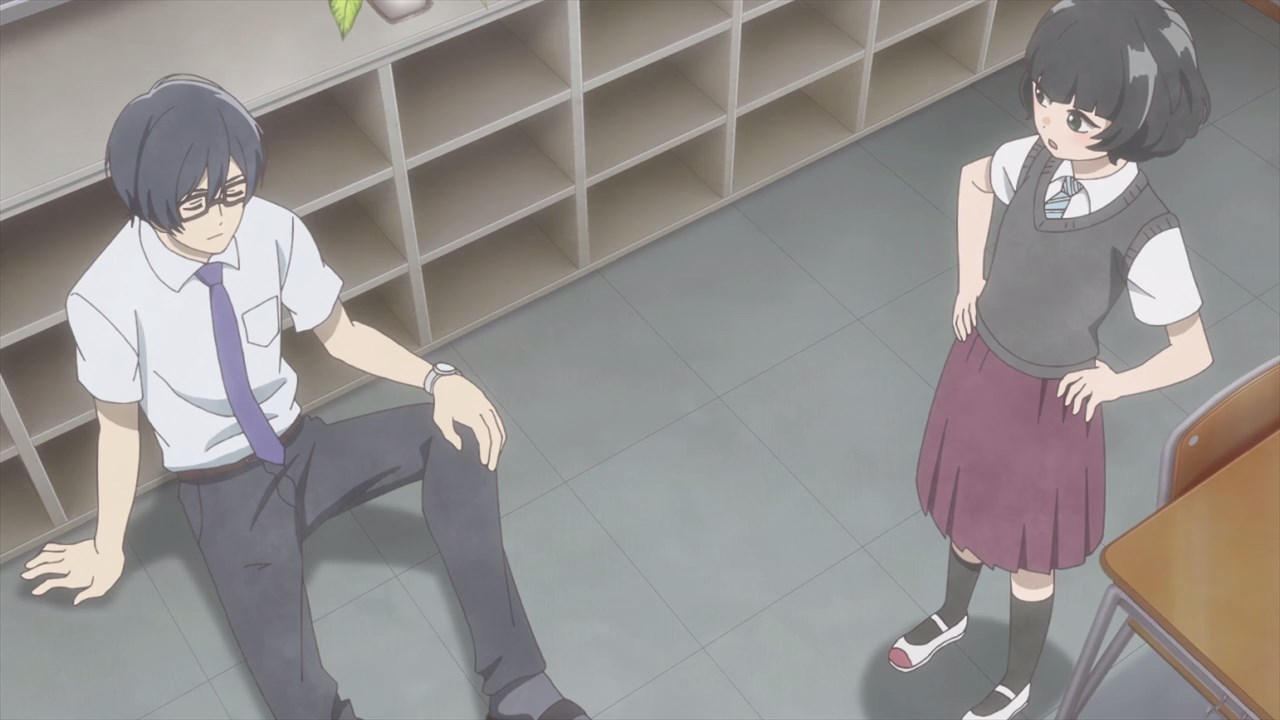 Meanwhile, here’s Tomoaki Yamagishi as he’s finally freed from being tied-up by the Literature Club. It’s crazy that he’s involved in this mess, but Yamagishi-sensei still supports the girls to prove that Sonezaki and Amagiri are innocent.

Oh yeah and as for Hitoha Hongou, she still harboring some feelings for Yamagishi-sensei, but I have a feeling that Hongou will eventually move on. 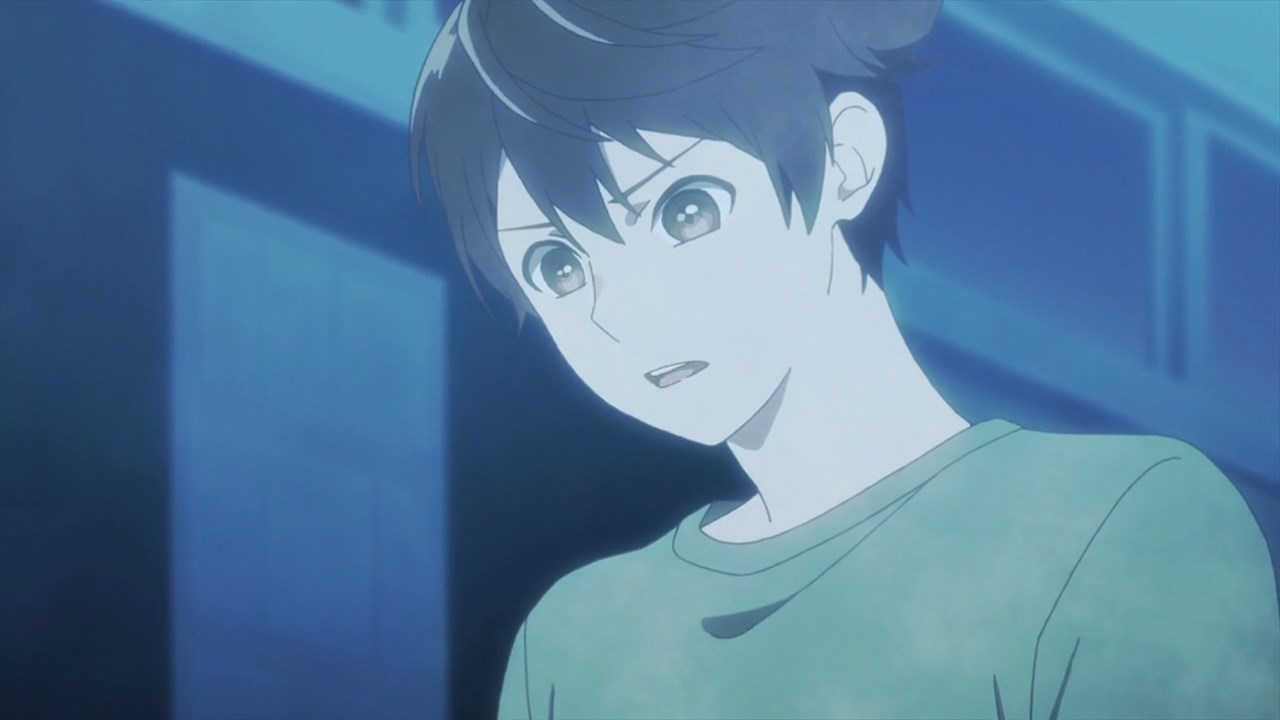 Let’s go back to Izumi Norimoto where the reason why he’s sexually-attracted to Niina Sugawara is because it’s kinda embarrassing to look at his childhood friend in a sexual way. Heck, Norimoto doesn’t want to do it with Sugawara as he really wants to take his relationship with Onodera slowly.

So yes, Izumi is still faithful to Kazusa even after admitting that he got turned on by Niina’s stunning looks. 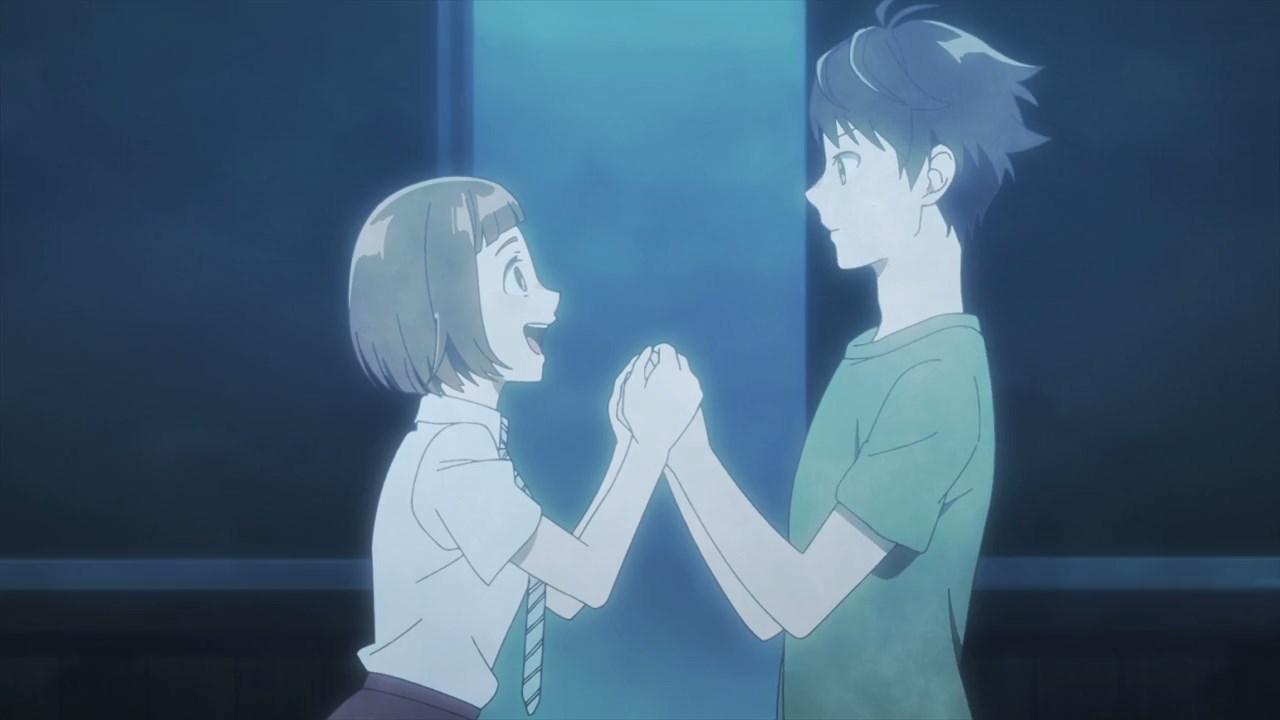 But for Kazusa Onodera, she finally understands her boyfriend as there’s no need to rush on there relationship. C’mon, they can do it once they’re married. 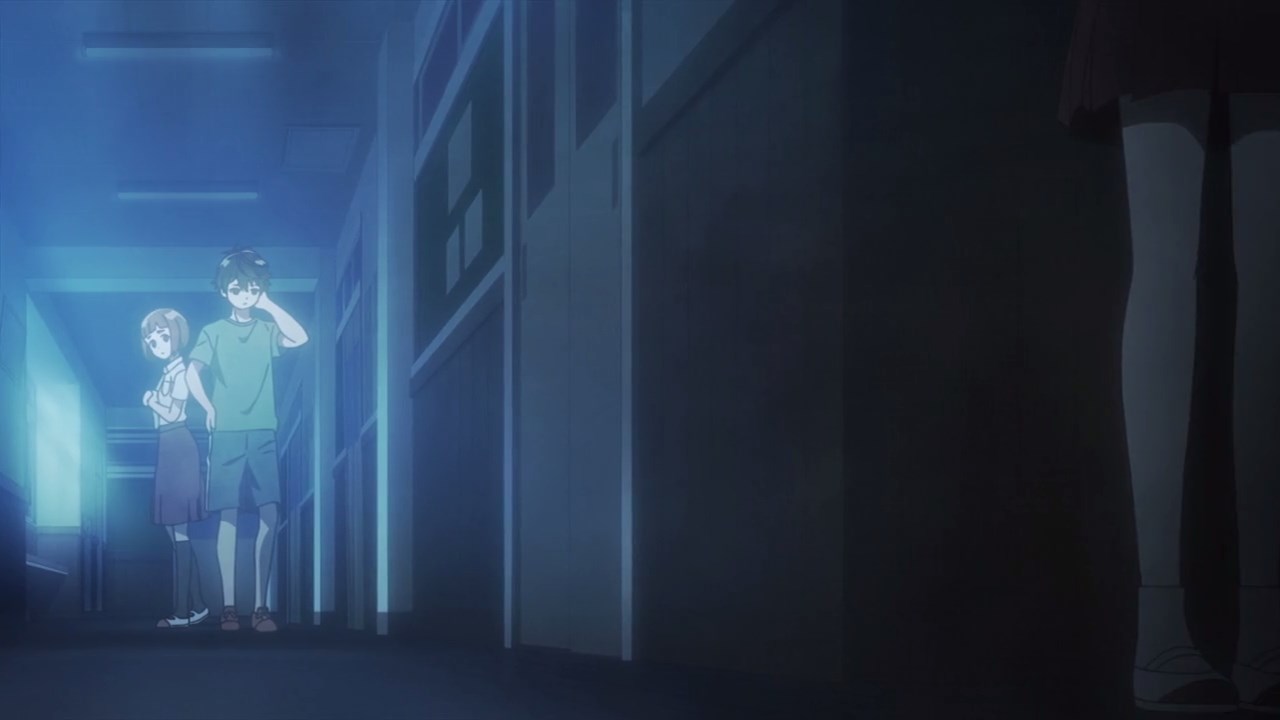 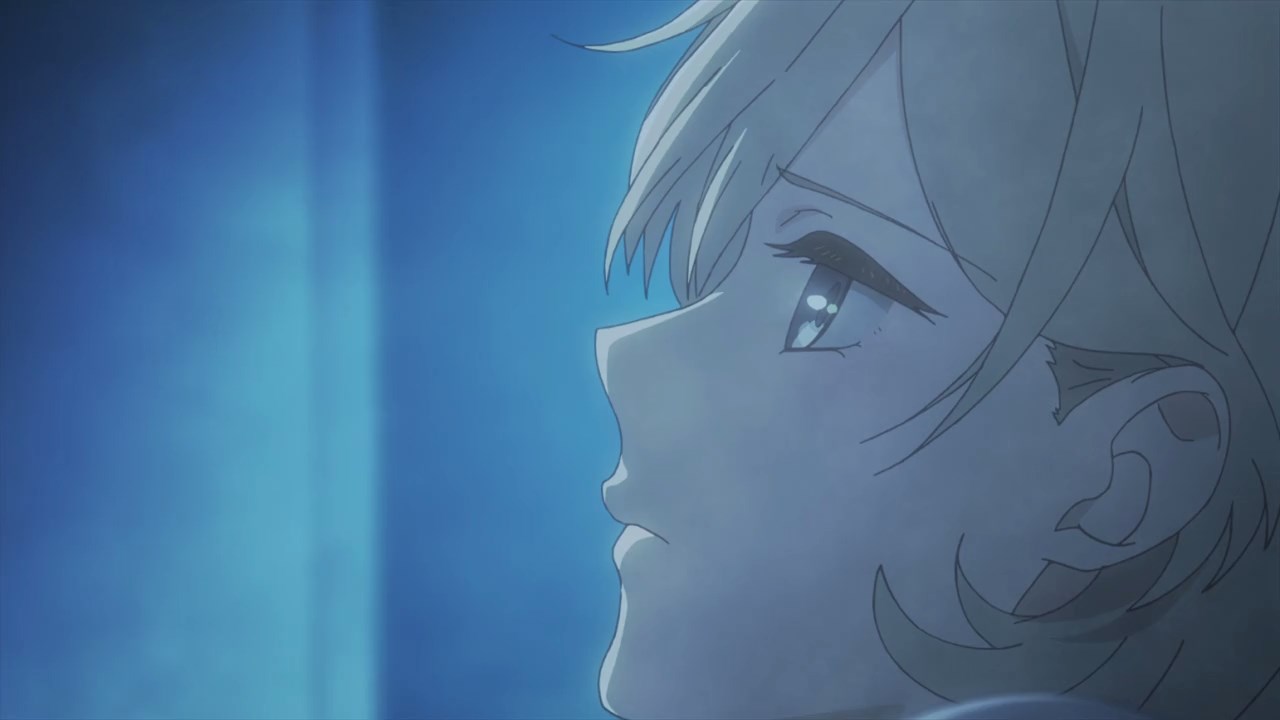 On the other hand, here’s Niina Sugawara where she finally admits her defeat. Even though Izumi got turned on by her looks, let’s just say that Niina couldn’t win against a childhood friend like Kazusa. 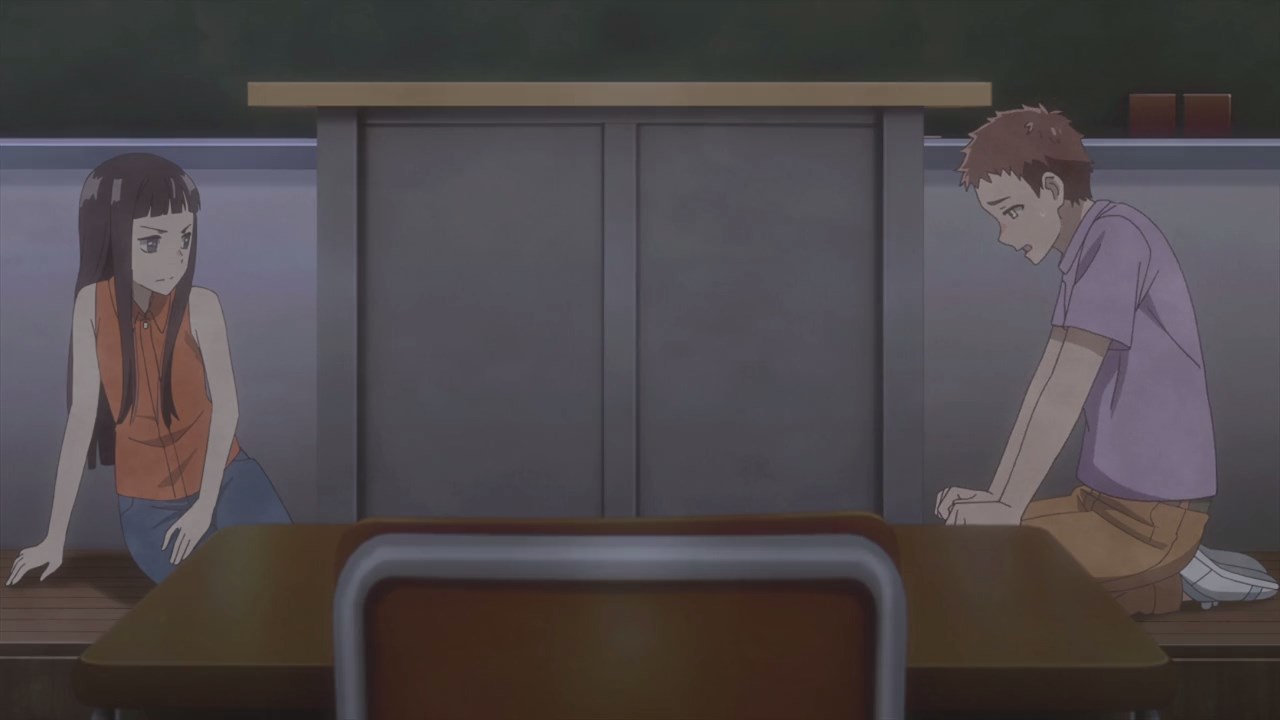 Meanwhile, here’s Shun Amagiri where he admits that he kissed a girl before, but it’s not like Amagiri had sex with someone. 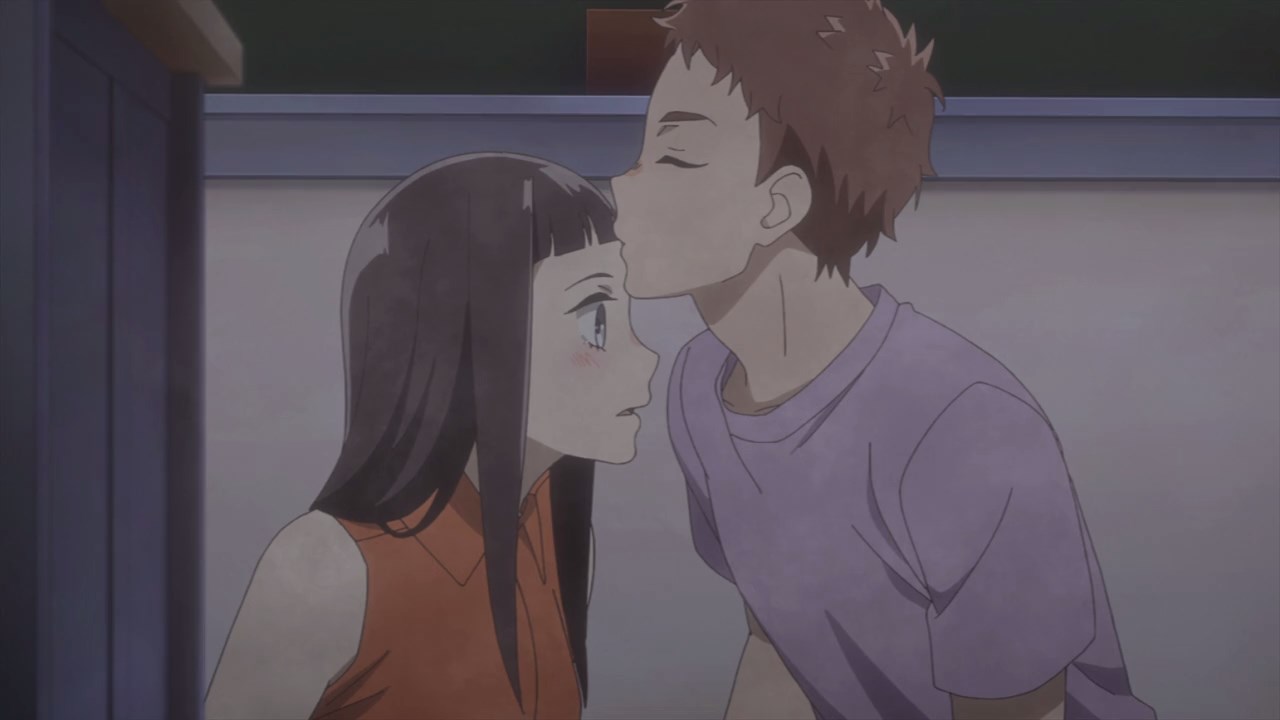 On the other hand, his heart is beating fast when Amagiri kissed Rika Sonezaki on the forehead. Yeah, it was his first time kissing someone other than the lips.

But hey, at least Sonezaki understands and forgives him. I mean c’mon, Rika can’t dump Shun at this point just because he kissed a girl before. 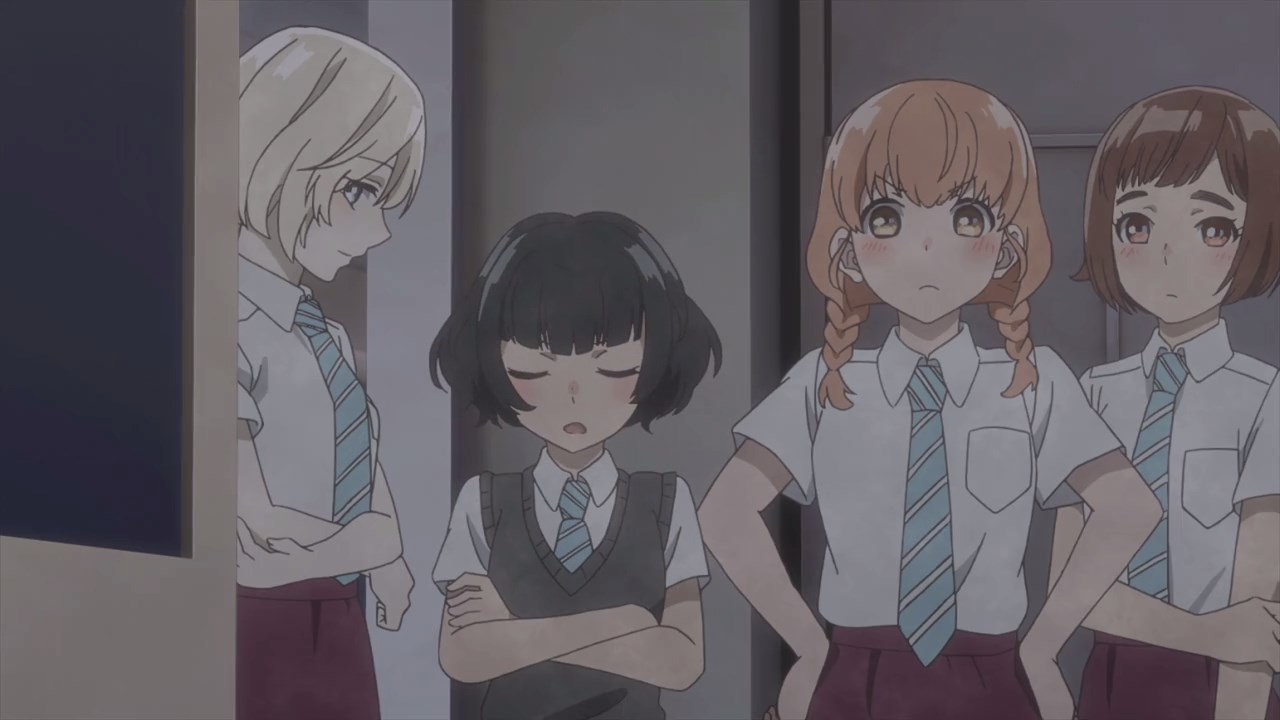 Unfortunately, their quiet time is over when the rest of the Literature Club found Rika Sonezaki and Shun Amagiri. 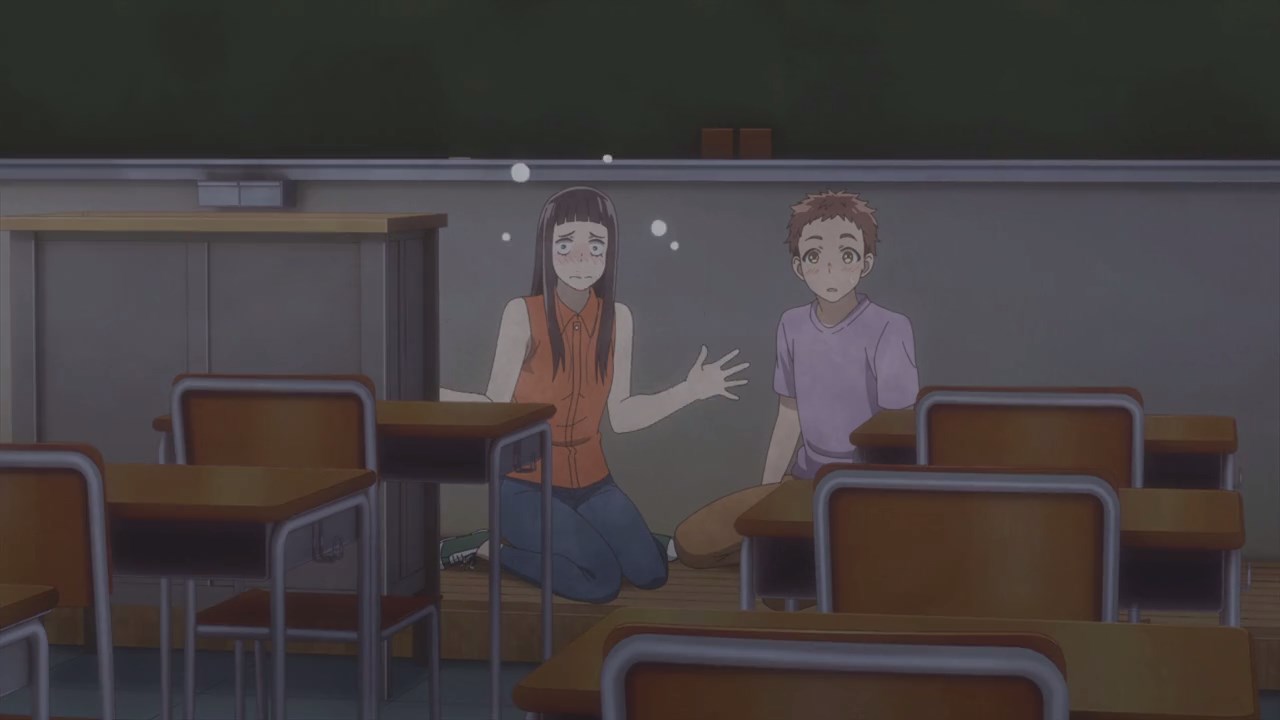 Yeah, looks like Kazusa and the rest will have to stop Rika from going further with her boyfriend.

On the other hand, what are they gonna do to save Sonezaki? I mean, they let go of Yamagishi-sensei and they need something to get their message directly to the staff. 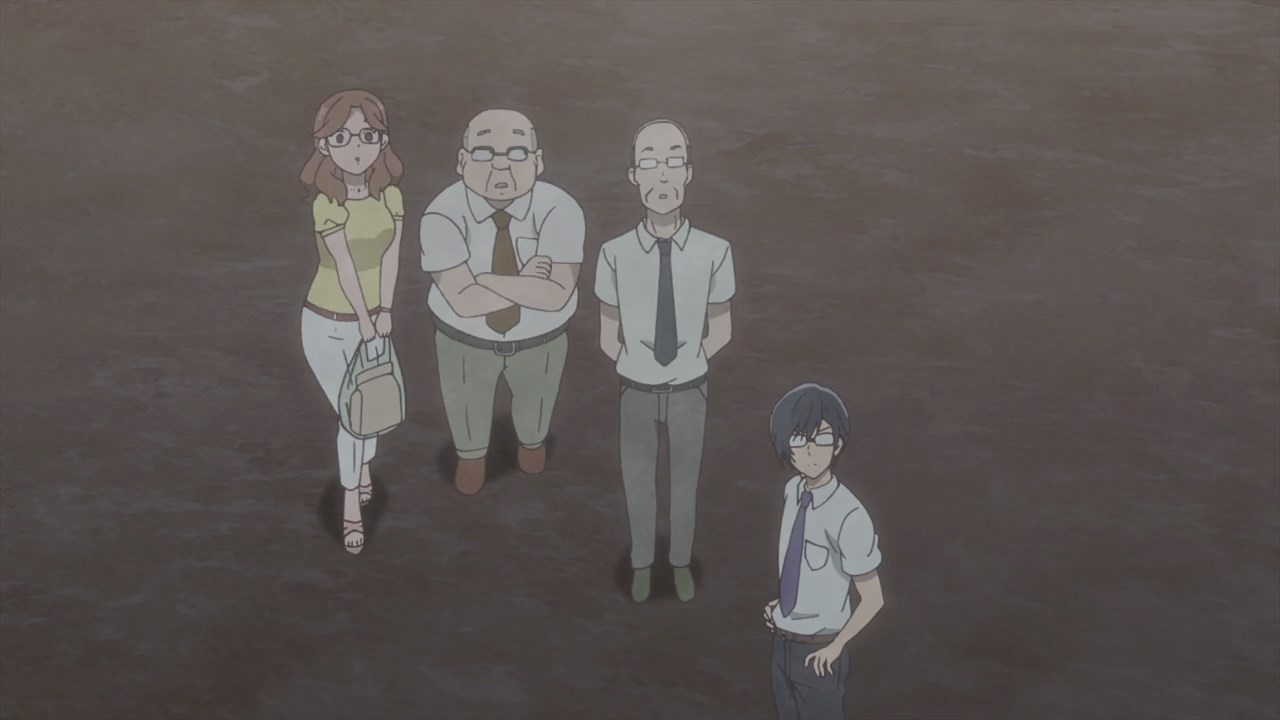 The next day, the teaching staff have arrived, thinking that the girls have finally calmed down and admit that they’re in the wrong.

But, Tomoaki Yamagishi told the principal and vice principal to look at the school building ’cause they’re in for a surprise… 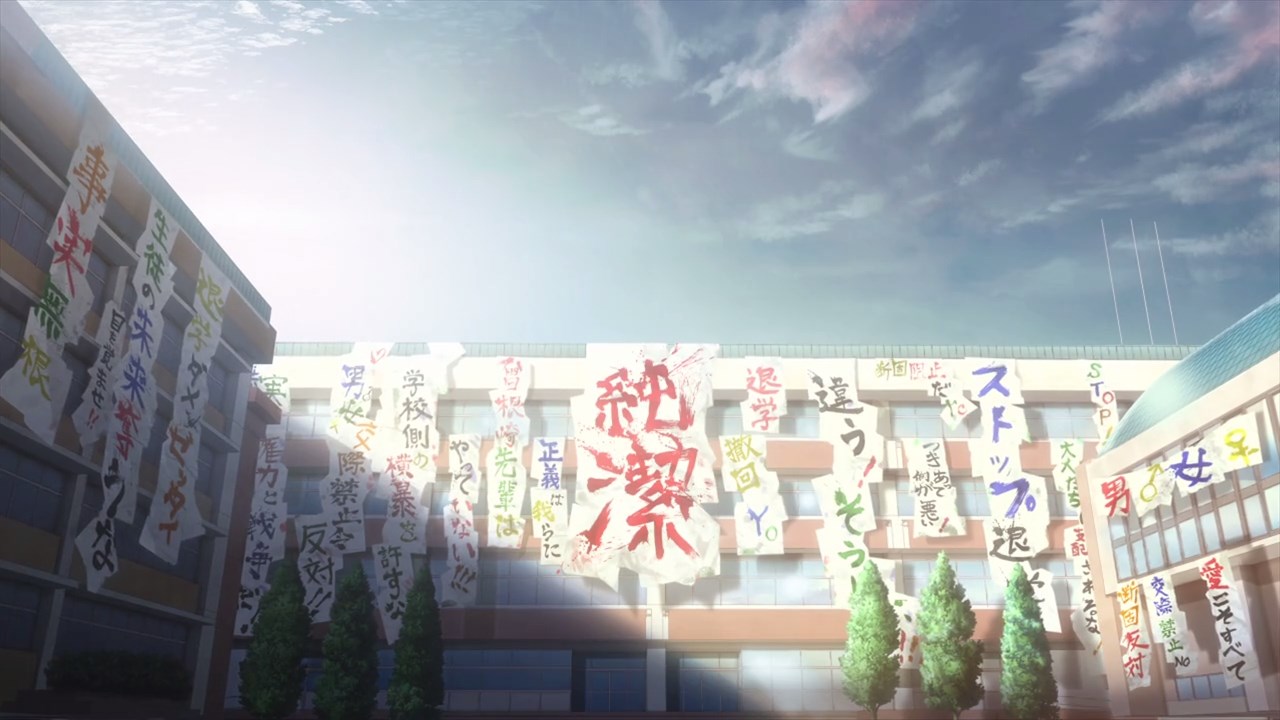 Turns out, the Literature Club covered the school with slogans such as “Repeal the rules against opposite sex relations!” and “Sonezaki-sempai didn’t do it!” that it caused quite a stir to the students and the teaching staff. 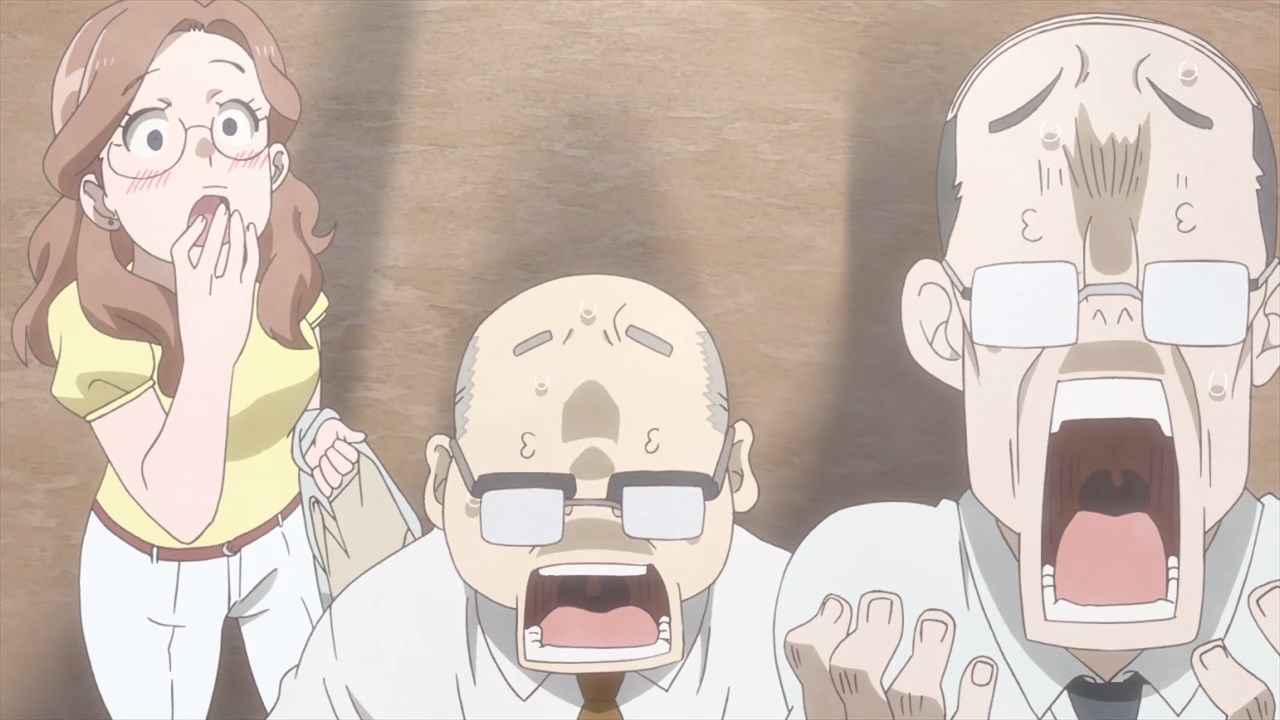 Heck, even the principal and vice principal can’t believe that the Literature Club will go such great lengths to lift the ban and clear any wrongdoings to both Sonezaki and Amagiri.

Well then, I guess it’s time for them to give into their demands because really, the school doesn’t need a dating ban and the Literature Club wanted to leave a mark, despite the girls experiencing the uneasiness of sexual relationship. 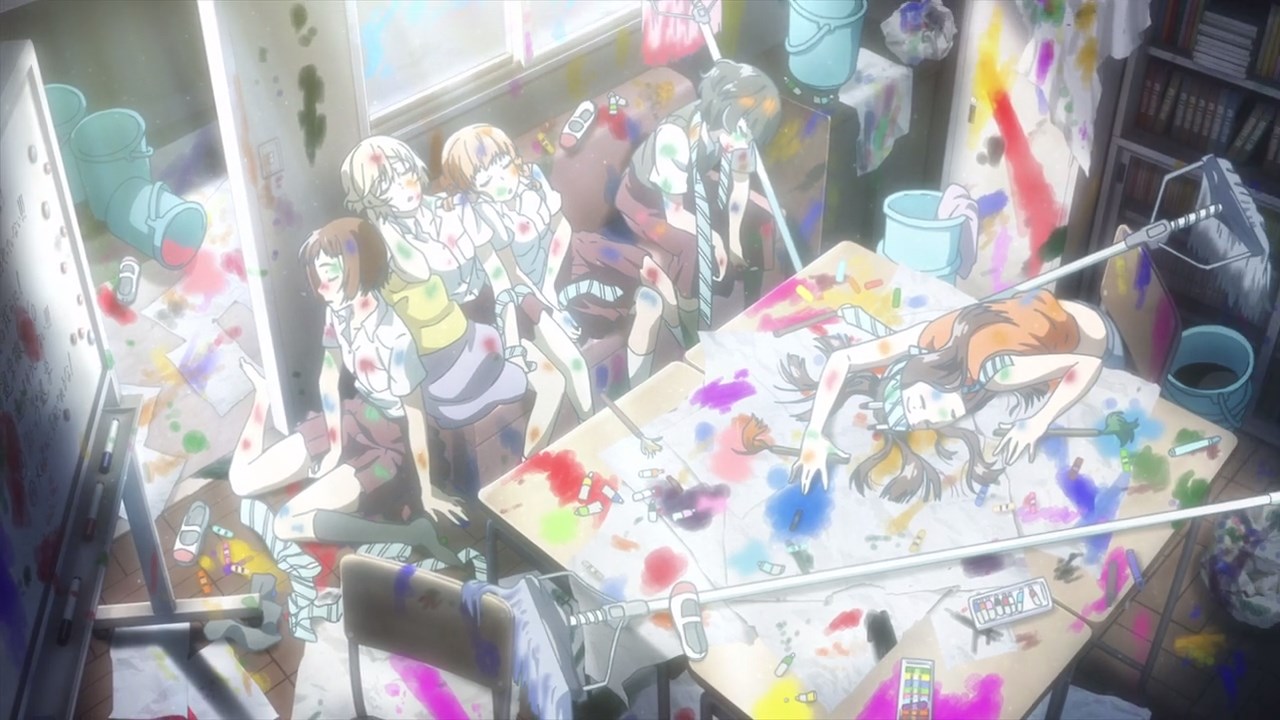 And that’s about it for Araburu Kisetsu no Otome-domo yo. Despite not being the most ground-breaking work from Mari Okada, I have to say that I have no regrets on watching this show as I love how the girls deal with relationship with the opposite sex, although I don’t like Niina Sugawara’s relationship with Director Hisashi Saegusa as I found it creepy.

On the other hand, it’s interesting to see the likes of Kazusa Onodera, Rika Sonezaki, Momoko Sudou, and Hitoha Hongou having their lives changed after experiencing love for the first time. Then again, the latter two weren’t so lucky as Momoko was disgusted on dating a jerkass, while Hitoha’s relationship with Yamagishi-sensei is seen as taboo. But hey, at least Kazusa and Rika fared better, especially after the love triangle of the former is finally resolved.

In any case, I enjoy watching Araburu Kisetsu no Otome-domo yo despite its flaws and if you ask me if it’s worth watching this show, I’d definitely give it a yes. 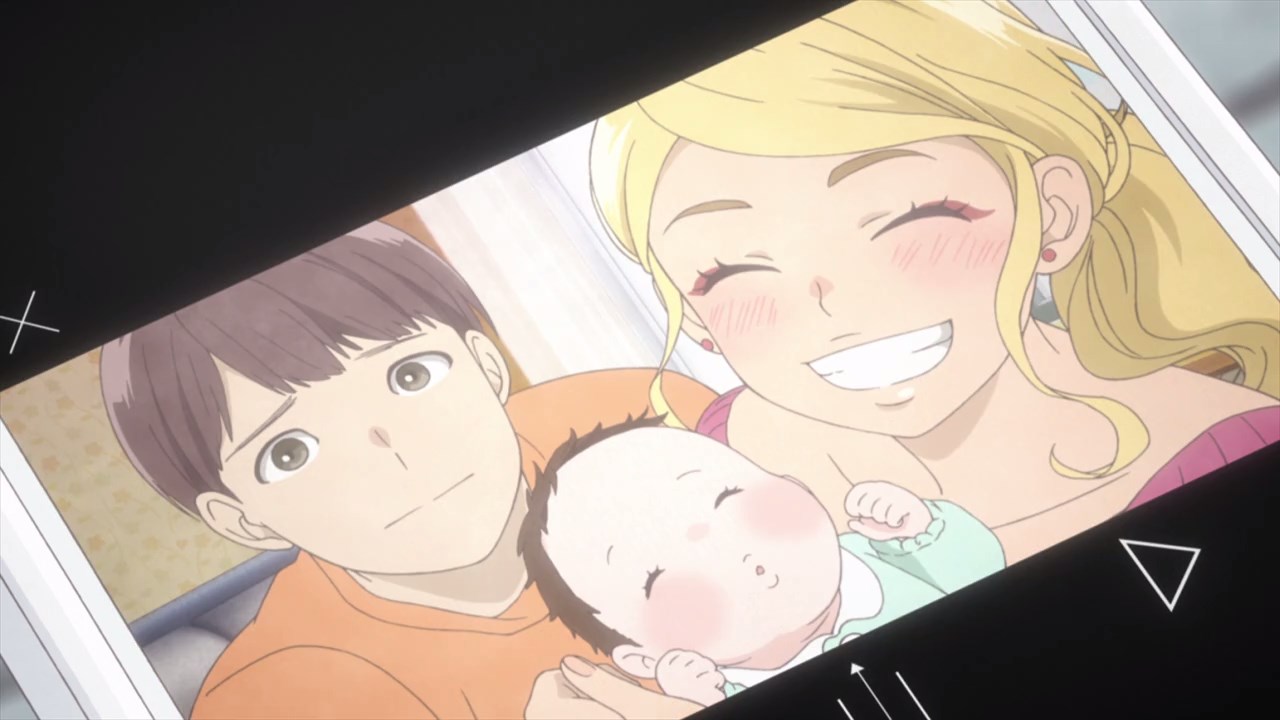 And now, it’s time for the epilogue where Sonoe Juujou will start her family life with the birth of his first child. I’m surprised that her plain-looking boyfriend stuck around Juujou as a husband. 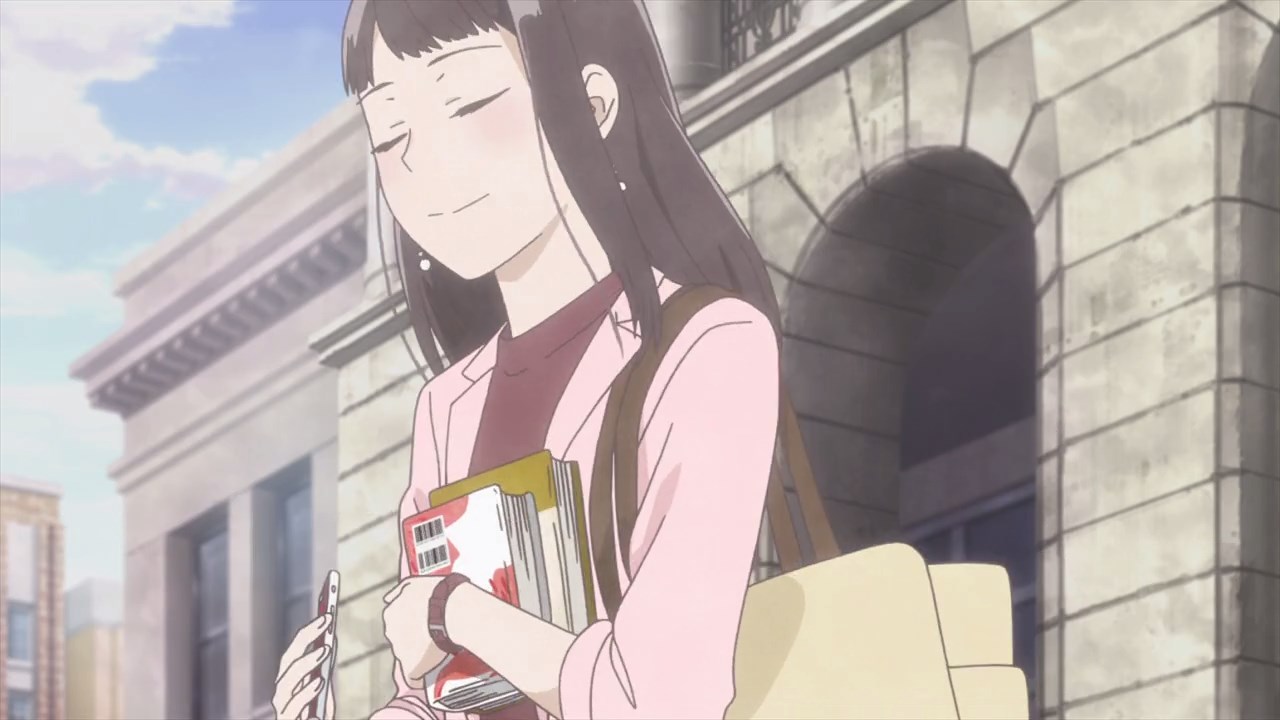 For Rika Sonezaki, it appears that she’s enjoying her college life with Shun Amagiri. It’s all thanks to the members of the Literature Club that they save Sonezaki from being expelled permanently. 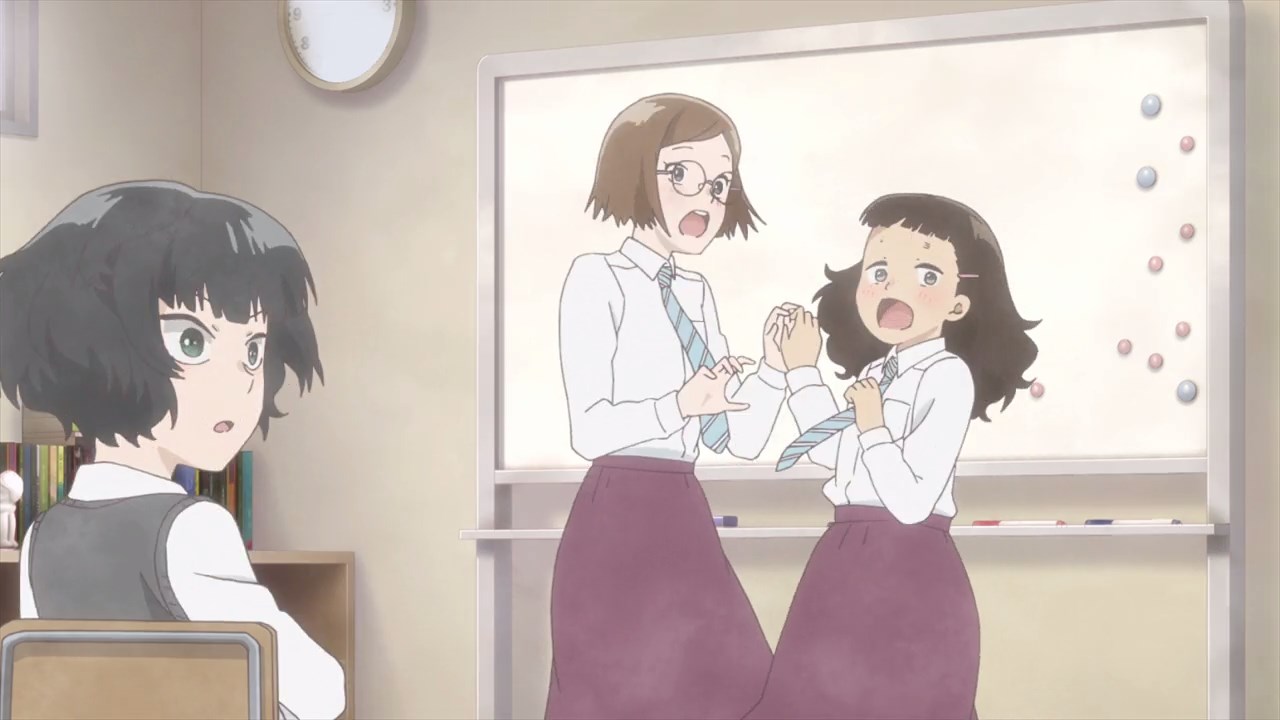 Speaking of the Literature Club, they’re doing fine as Hitoha Hongou becomes the club president, while adding 2 new members. I wonder what happened to Kazusa Onodera and the rest of them? 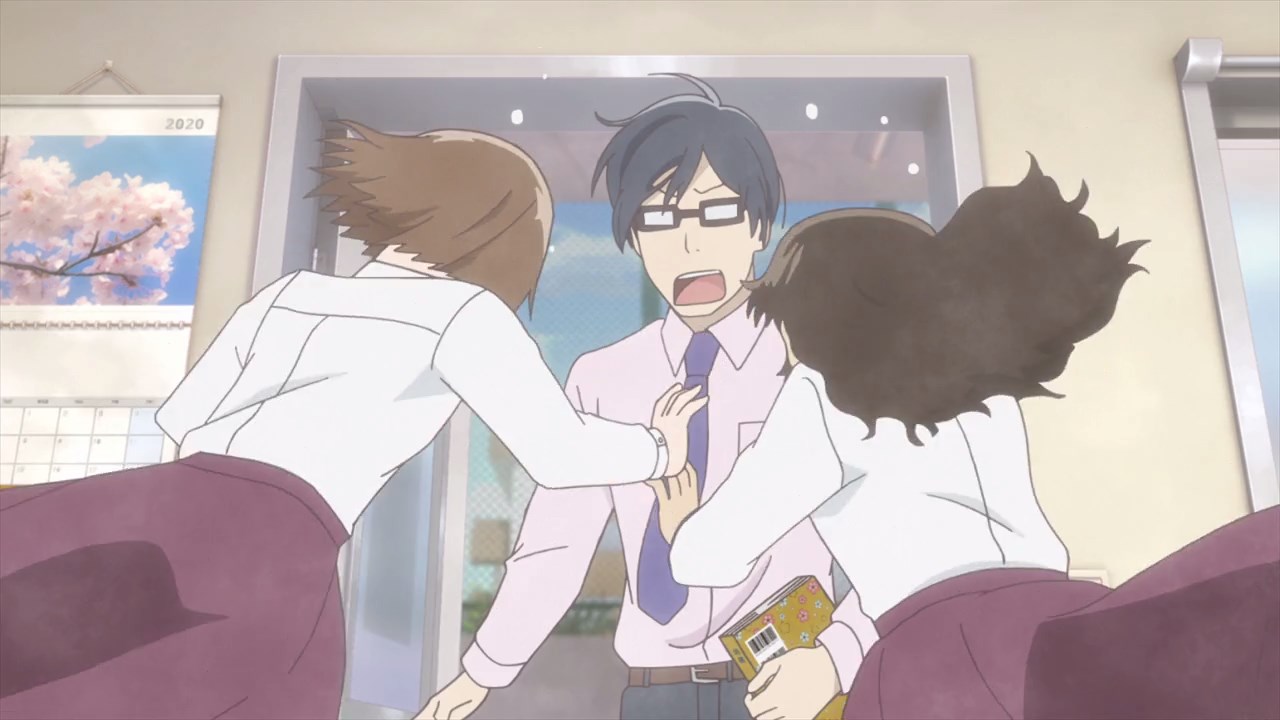 Also, Tomoaki Yamagishi is still teaching at Tojo High School as a club advisor. Oh yeah, and Yamagishi-sensei will marry Tomita-sensei in the future.

Yes, this teacher will become a married man but as for Hongou, I think she finally accepted his marriage to Tomita-sensei instead of harboring jealousy. 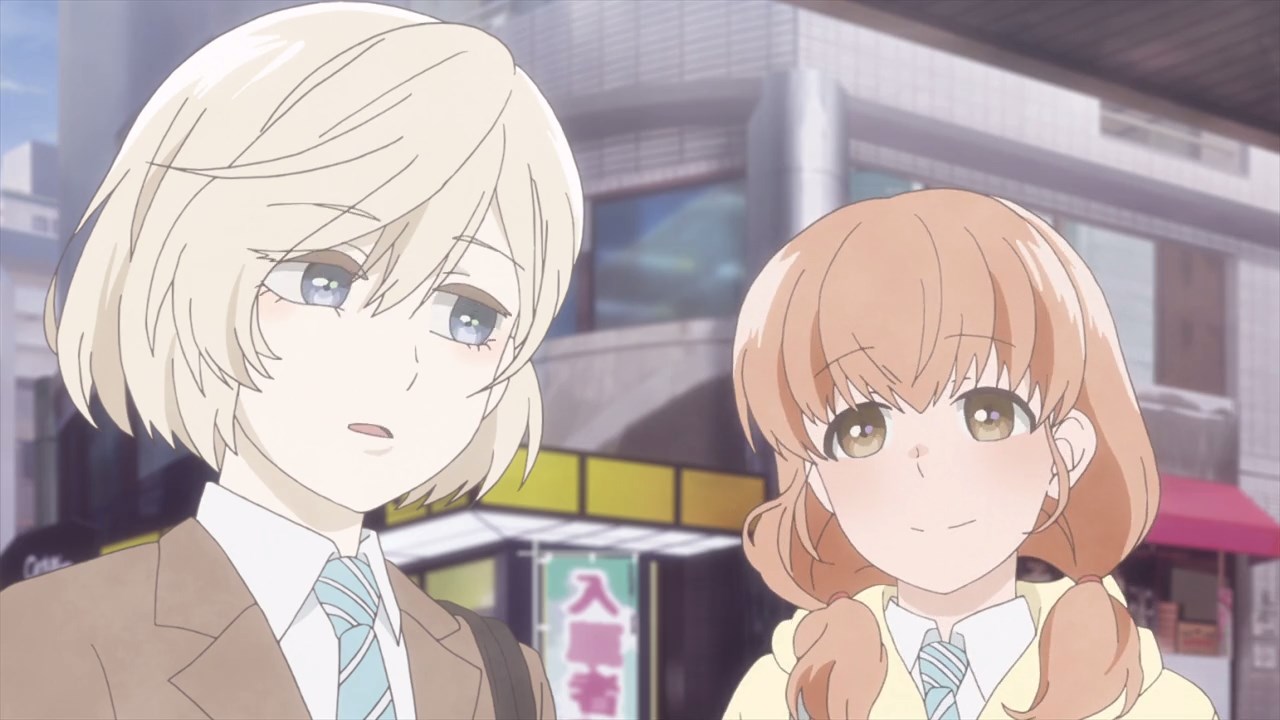 As for the rest of the Literature Club (I don’t know if they still remained as members), everything is back to normal as Niina Sugawara and Momoko Sudou remained friends.

Oh yeah, and they’re still friends with Kazusa Onodera even after she’s dating with her childhood friend Izumi Norimoto. 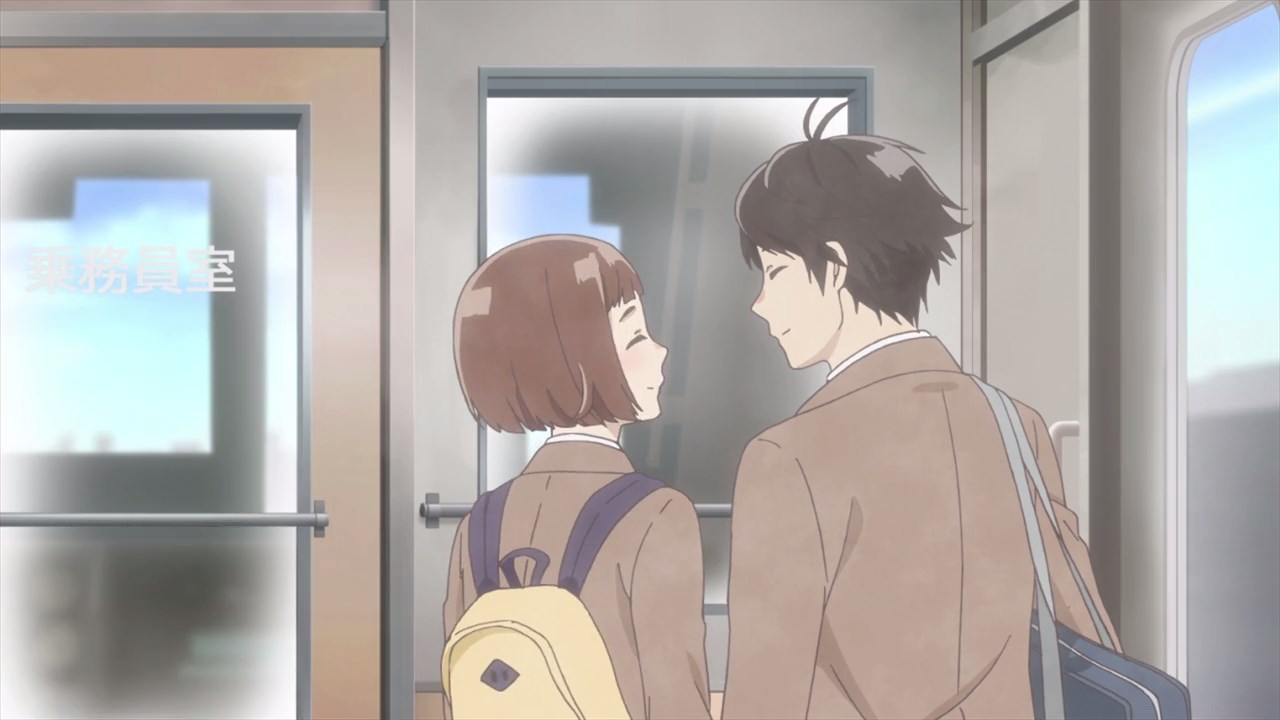 Of course, the relationship between Kazusa and Izumi had a rocky start, but I feel that it’ll go smoothly in the long run. After all, they have a perfect fit with each other!

Anyways, it’s time to say goodbye to the members of the Literature Club as this show is finally over!