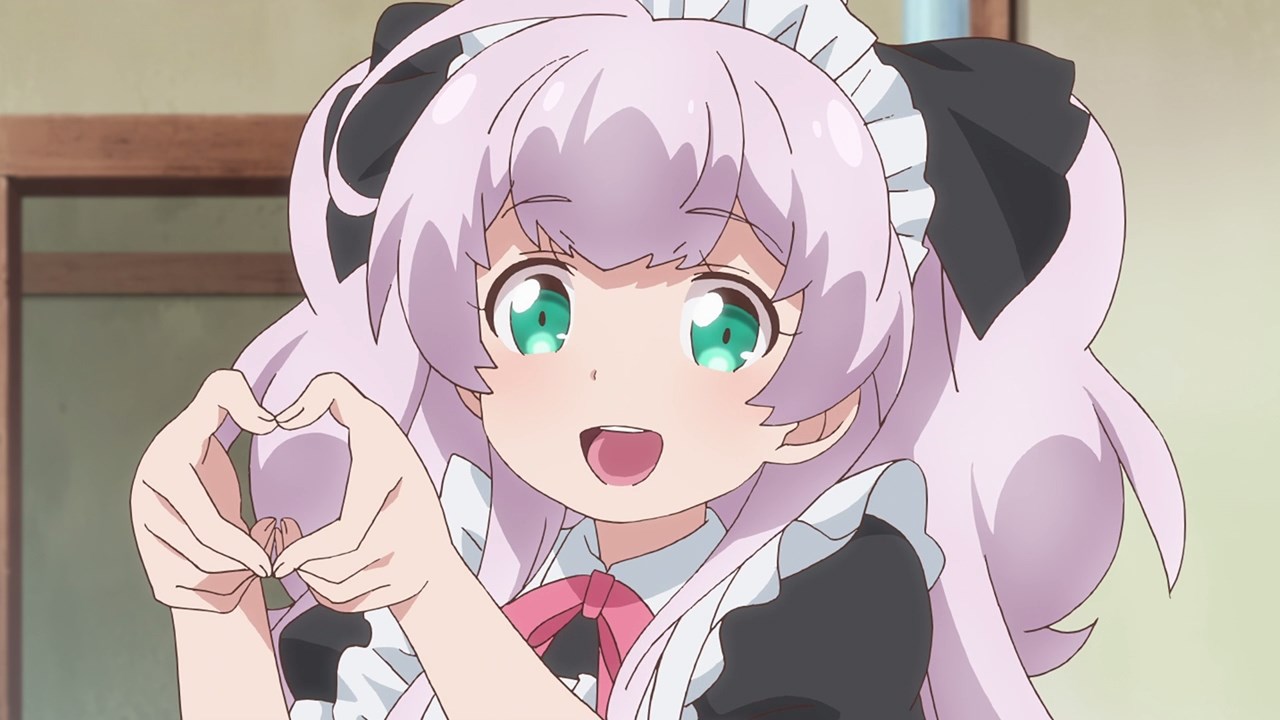 Here’s Adele von Ascham or should I say Mile as she performs her powerful technique that was used during her previous life as Misato Kurihara. 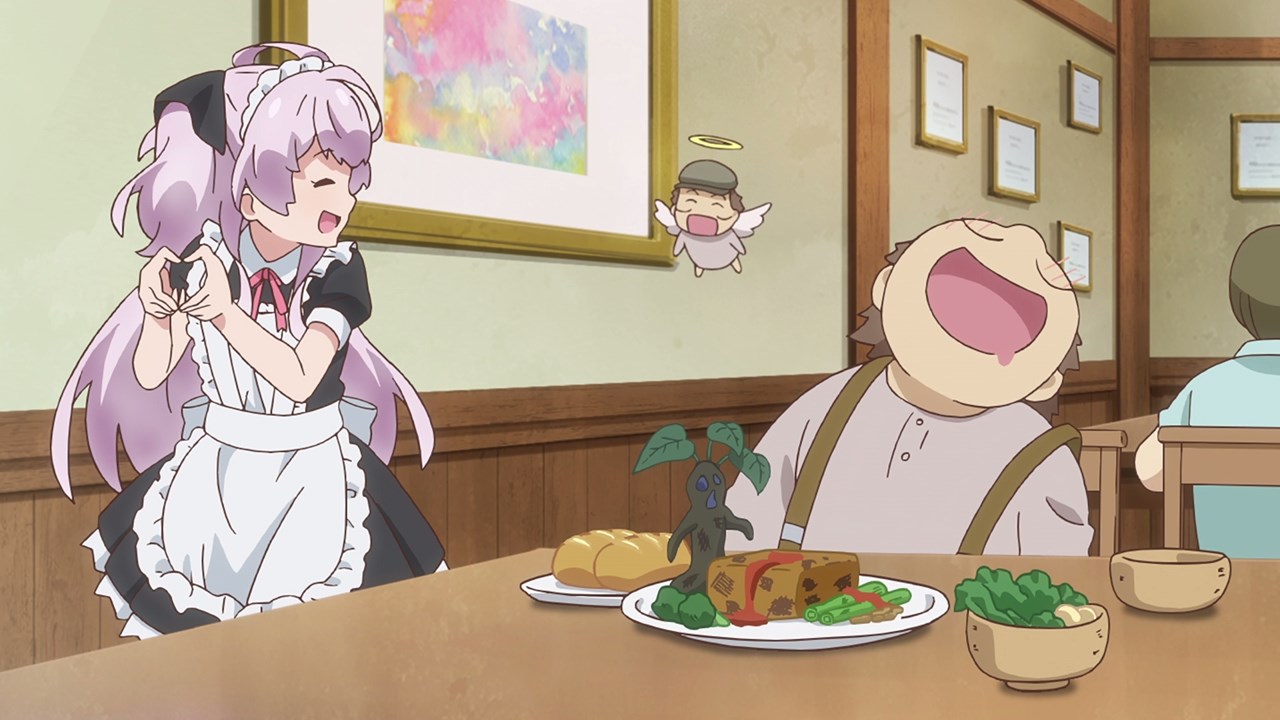 And as you can see, Mile made this meal very delicious that the customer fainted. But really though, this is not a maid cafe but here’s Mile bringing it to another world! 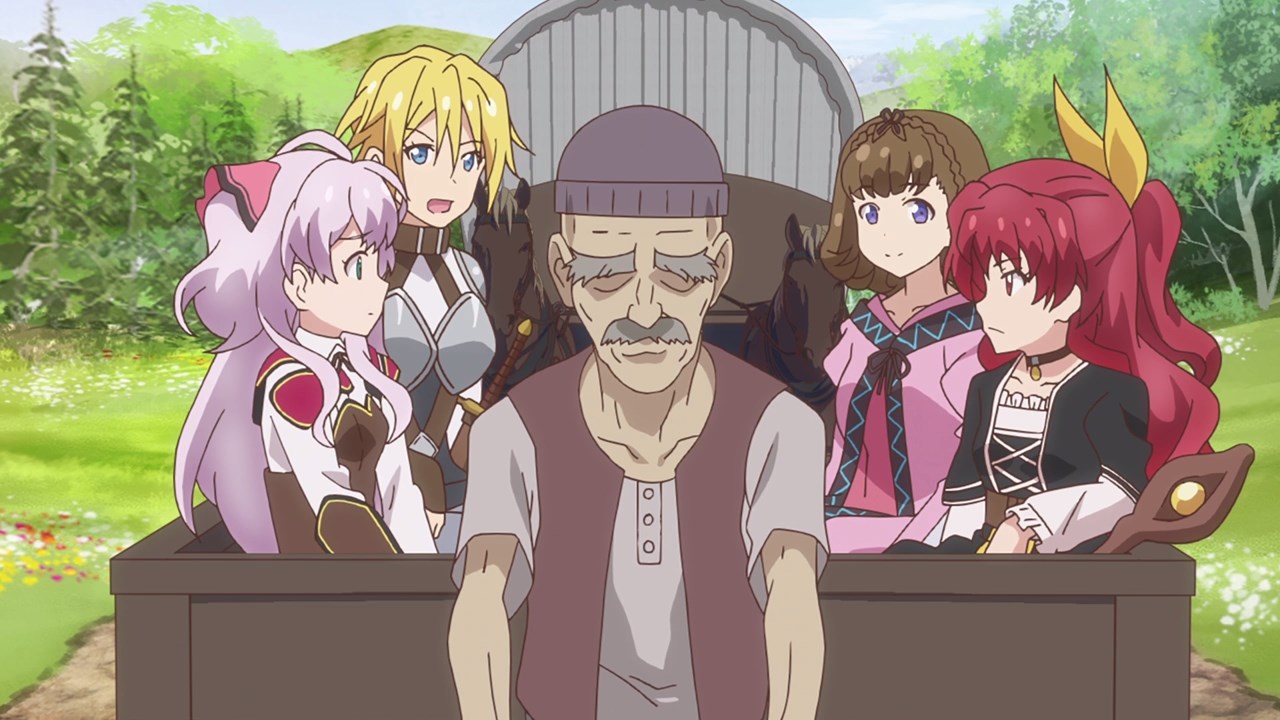 Anyways, the Crimson Vow is getting a job now that Mile and her friends have become hunters.

Well, this is not their first one, but they can handle this job as Mile and the rest will protect the merchants from being robbed. 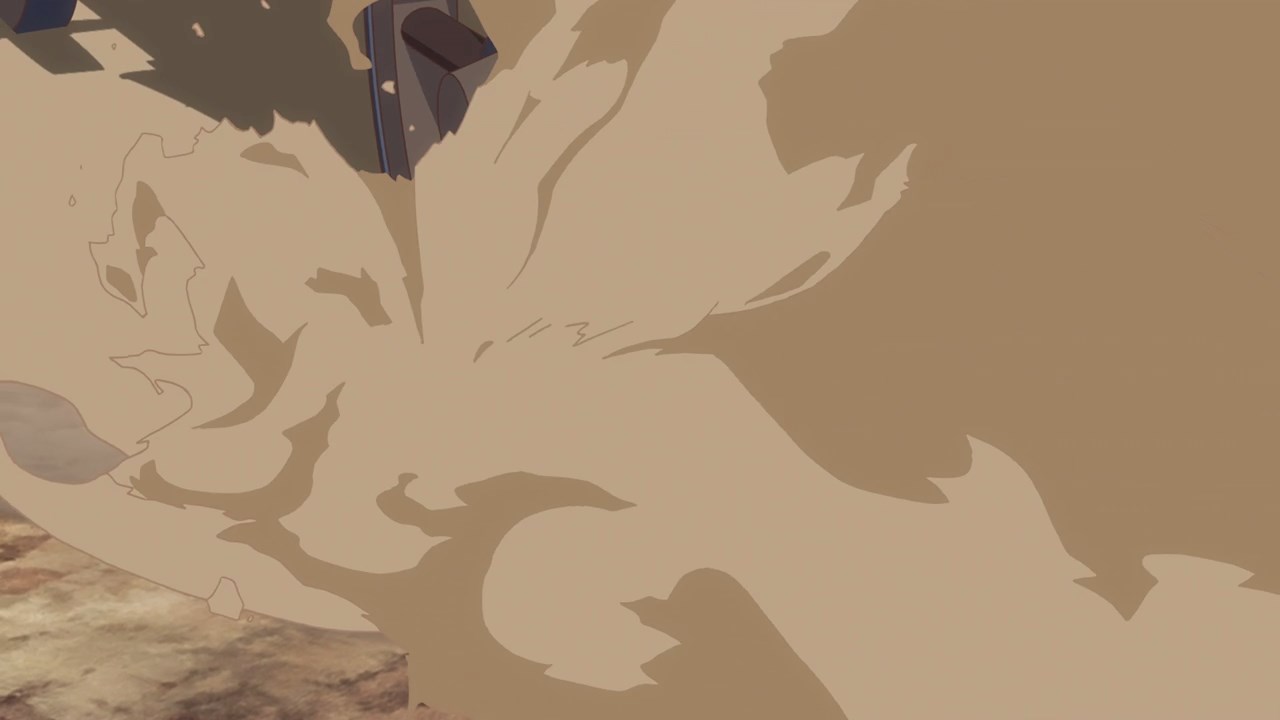 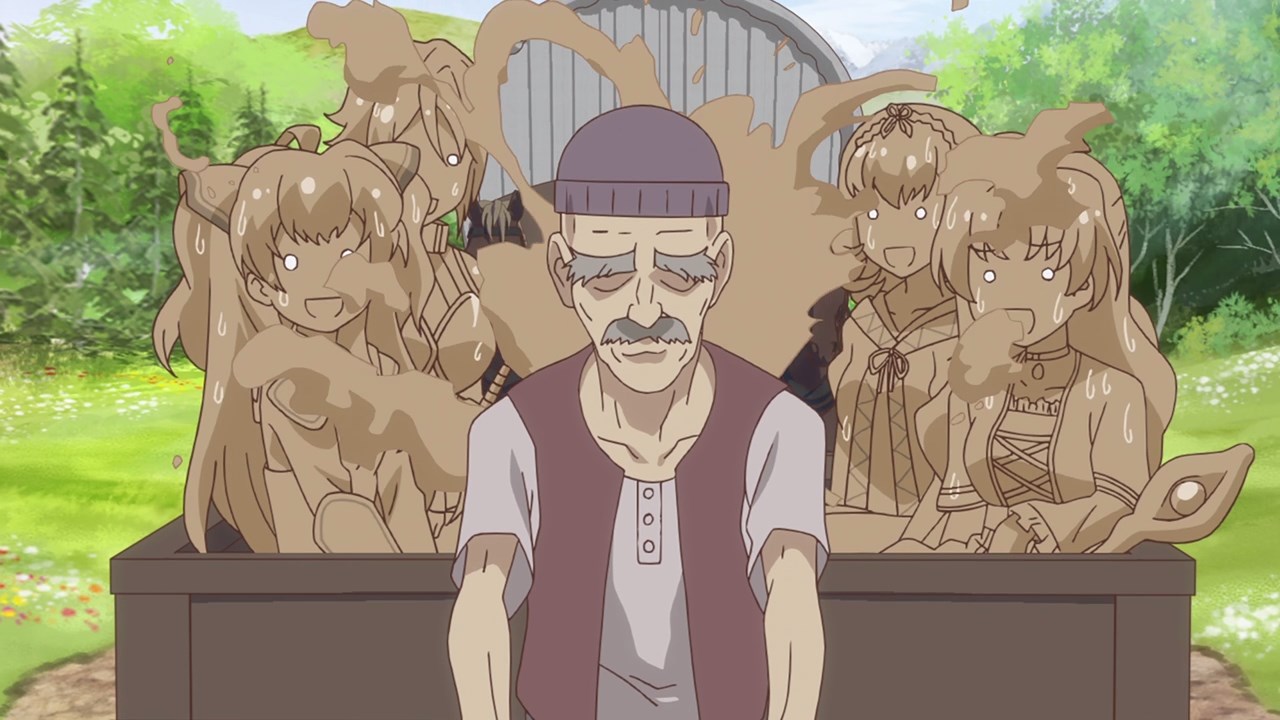 However, it appears that they’re off for a bad start where the members of Crimson Vow got covered with mud. I wonder if they have some extra clothes? 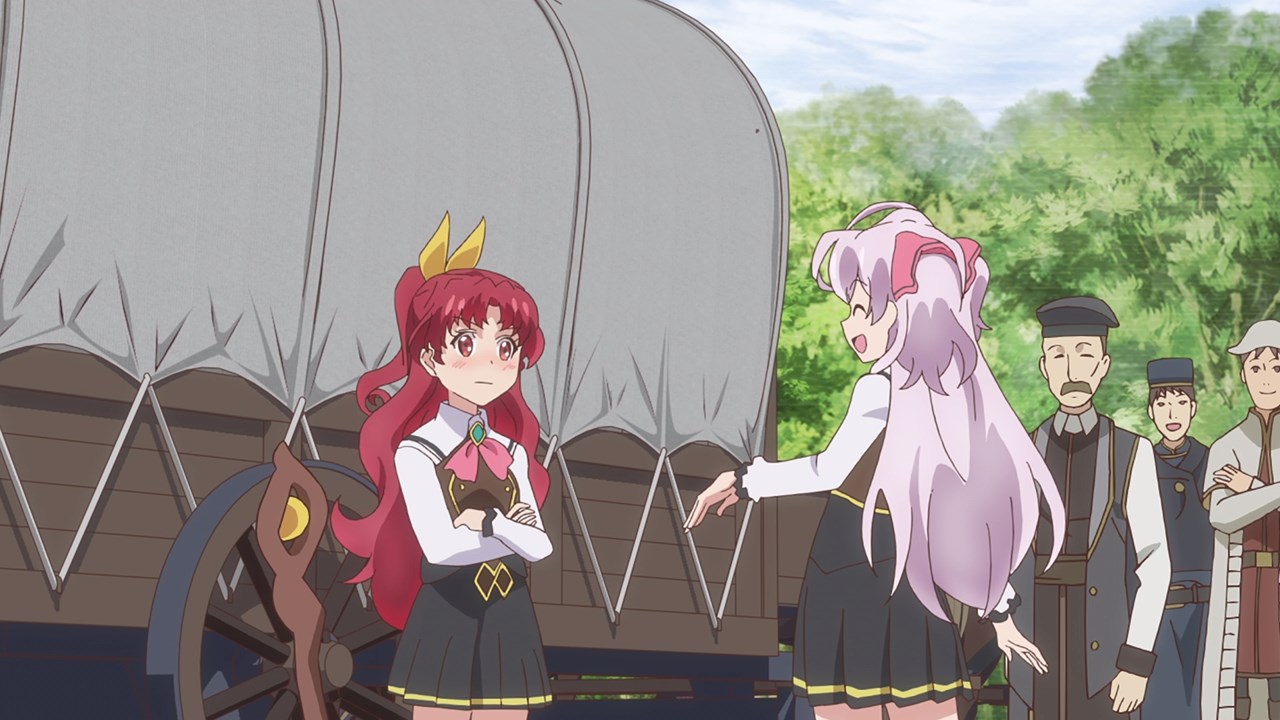 Fortunately, Mile brought some spares and while her clothes fit well for the likes of Reina, I’m worried about Mavis von Austien and Pauline. 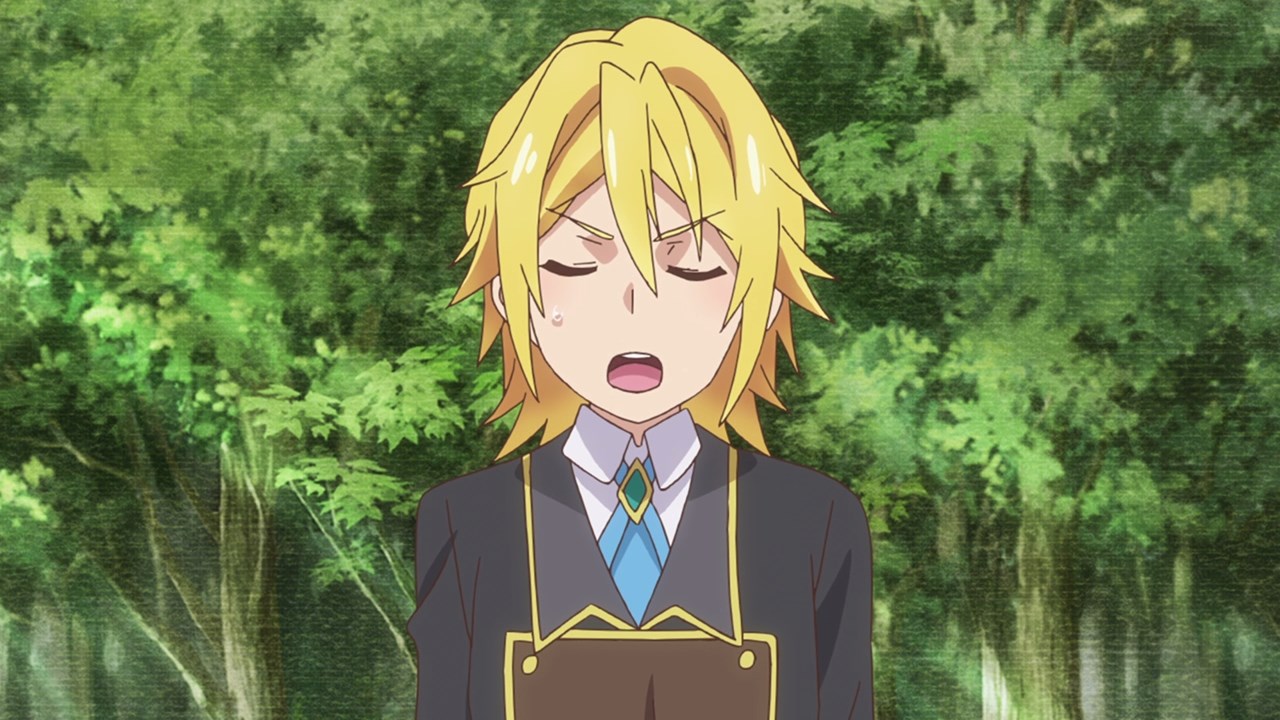 For Mavis, she’s wearing a butler uniform. Gotta say that Mile has some good taste on giving clothes that shows Mavis’ mascular charms, as if she came straight from a Takarazuka Revue stage play. 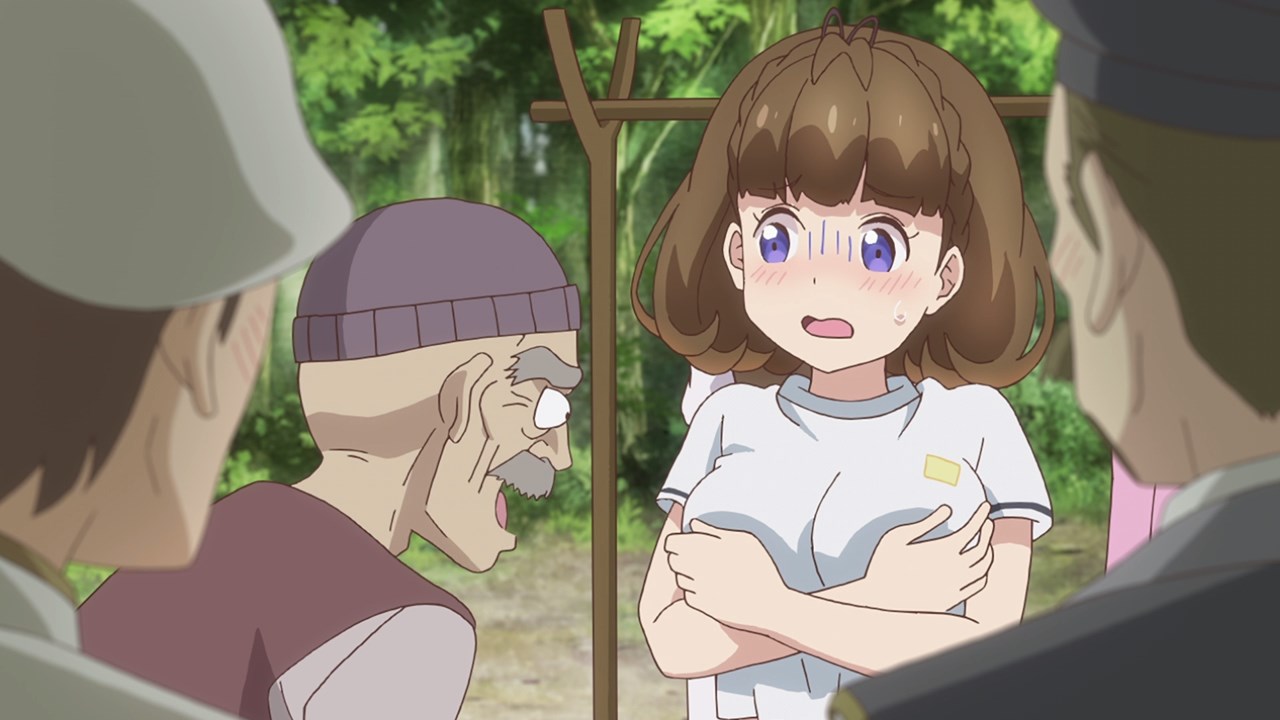 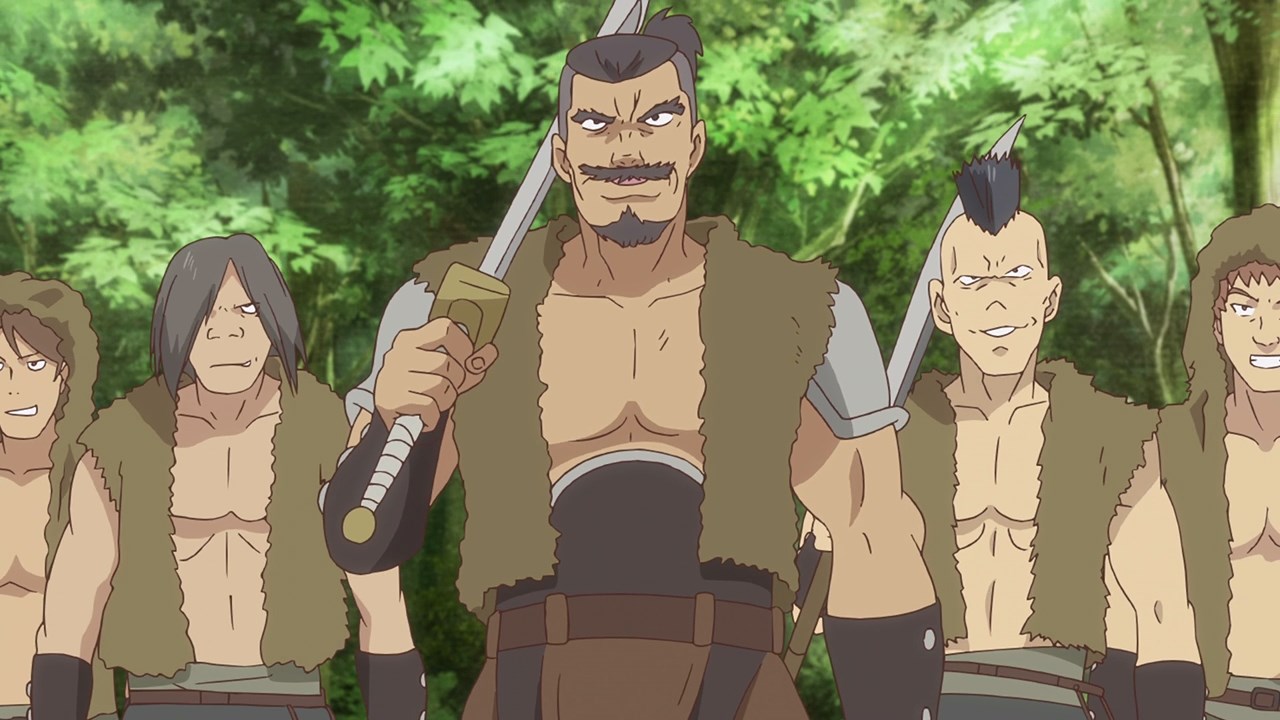 Suddenly, a band of bandits have arrived to steal some goods and some people to be sold to slavery. Unfortunately for those bandits, Mile and her friends will stomp them easily! 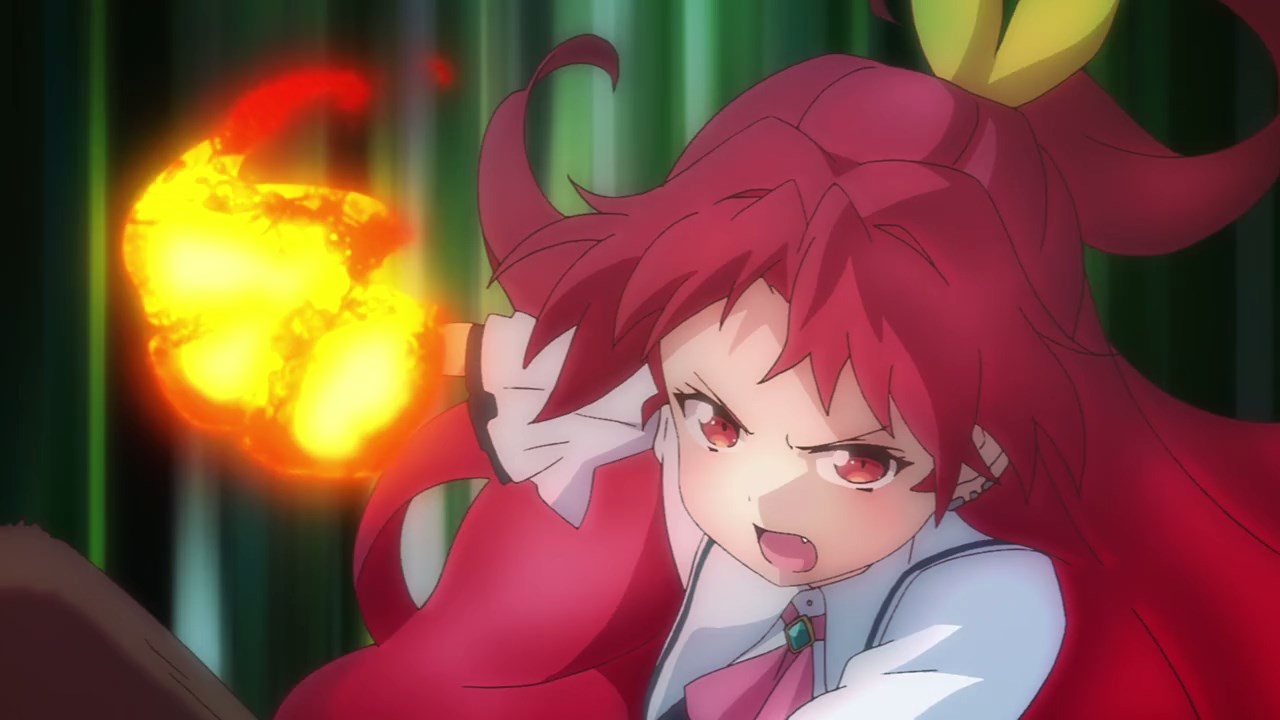 Speaking of Reina, it appears that she’s getting very feisty today as she casts fire spells relentlessly. 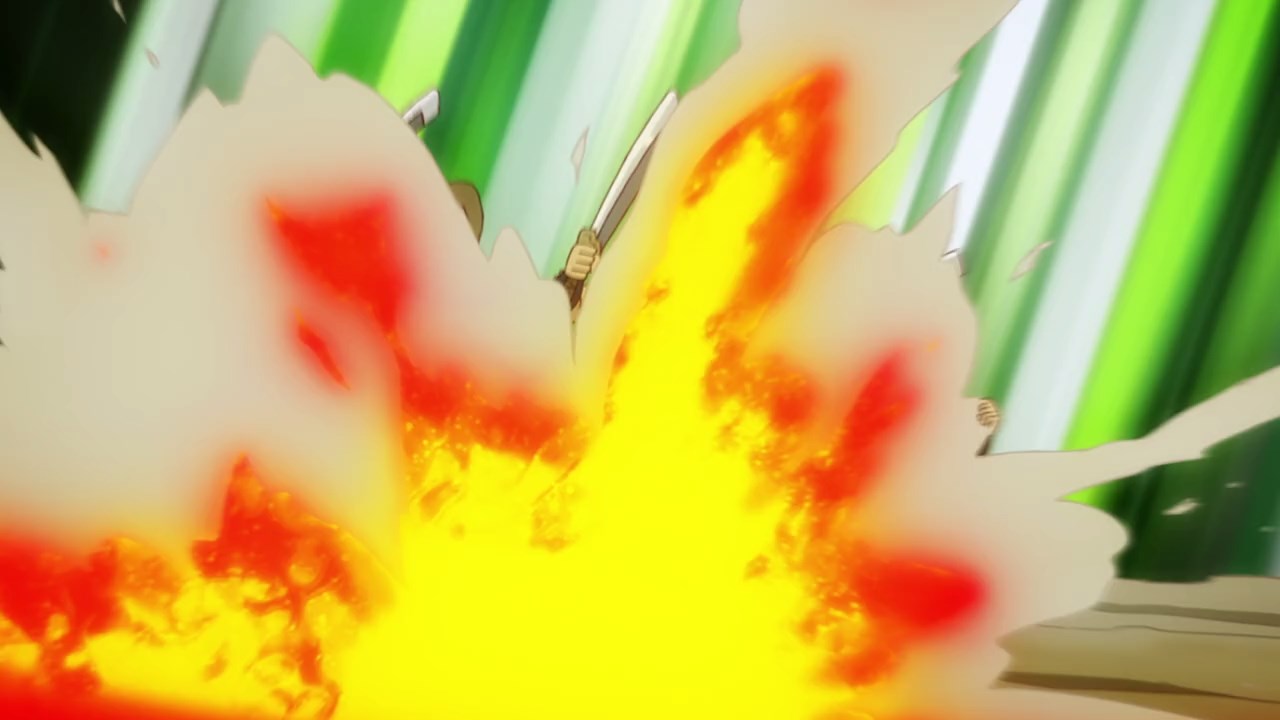 And as you can see, these goons didn’t stand a chance! Well then, looks like the Crimson Vow can fend off these bandits by themselves. 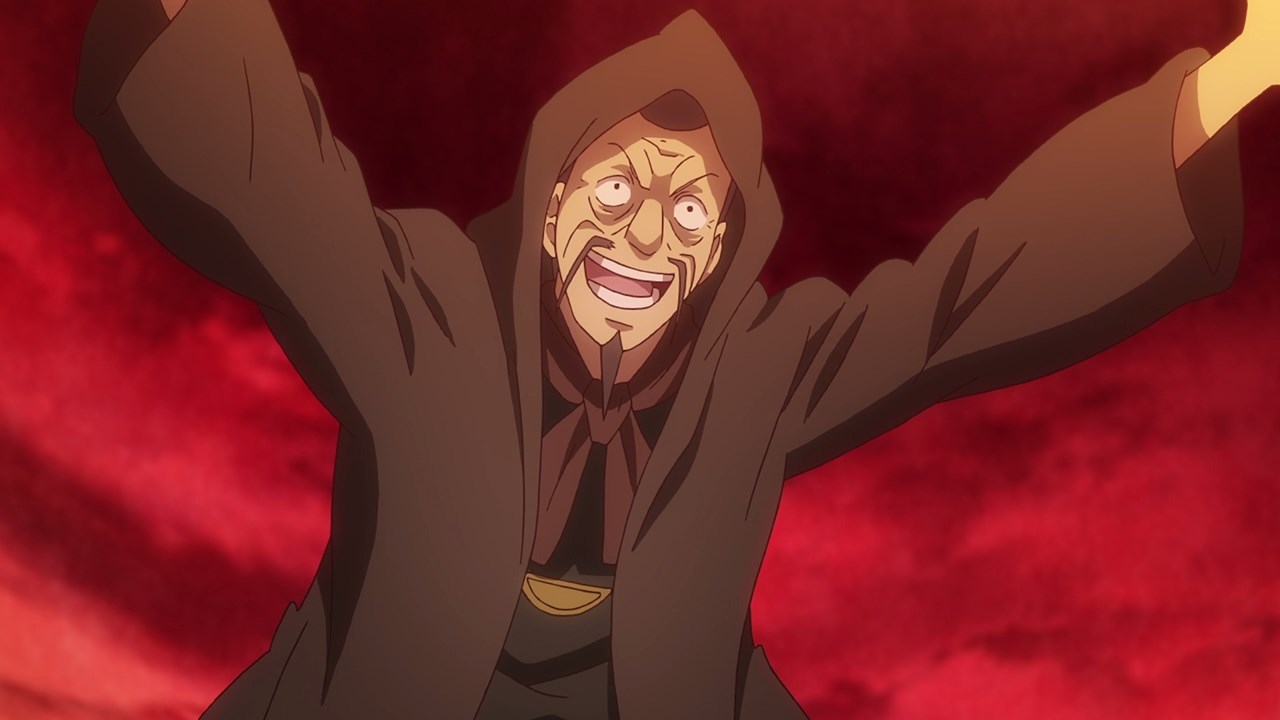 But, they have a secret weapon in which their resident sorcerer will unleash it in front of Mile and her friends. 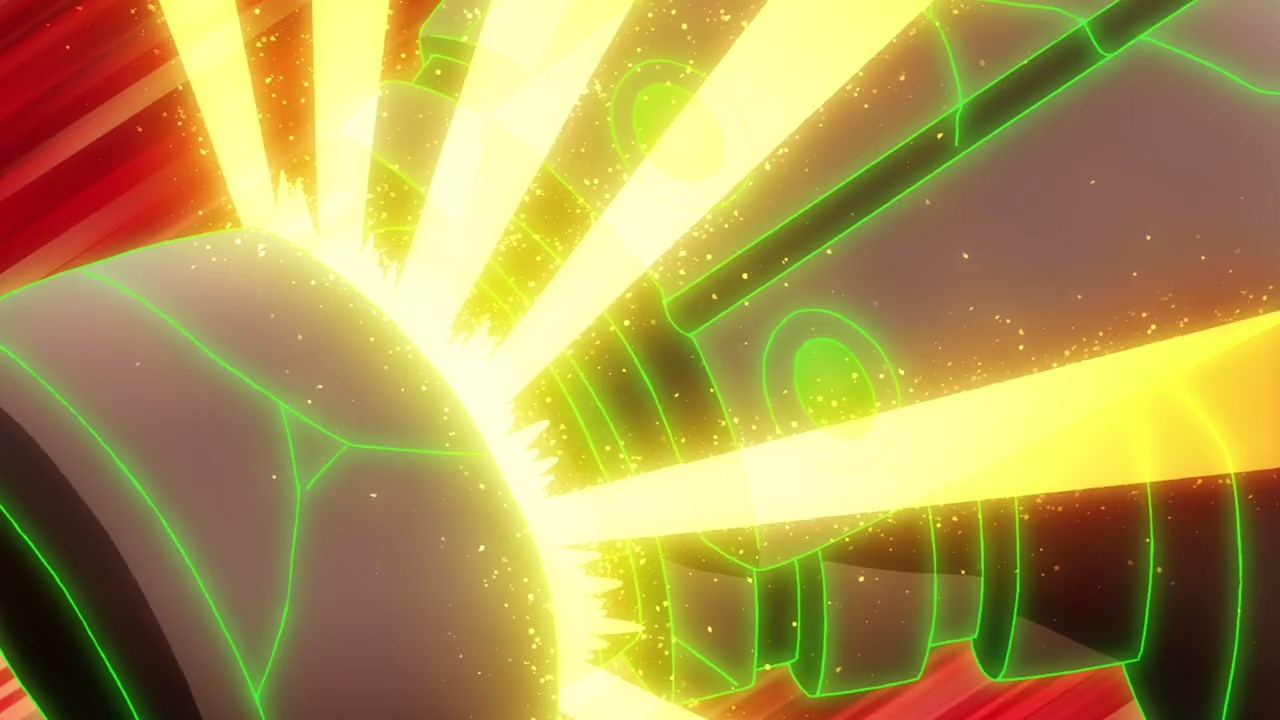 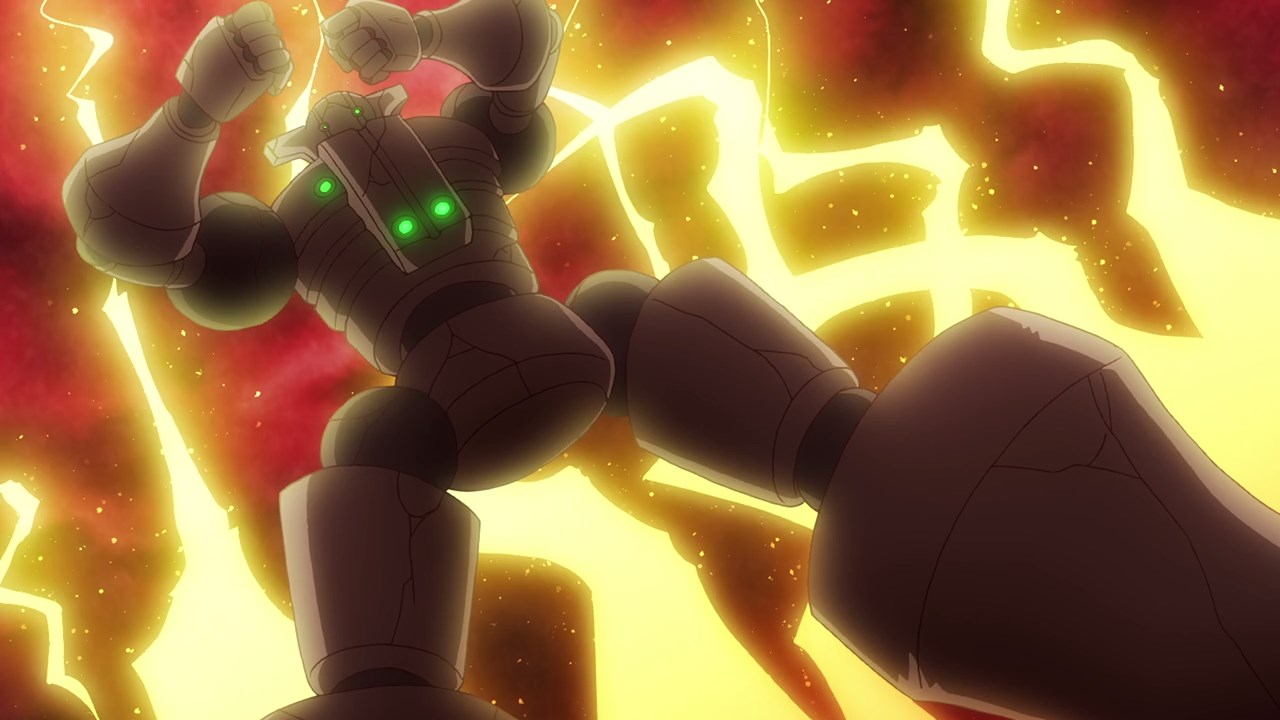 Anyways, this scorcerer created a powerful golem in which its combination sequence is inspired by mecha anime. 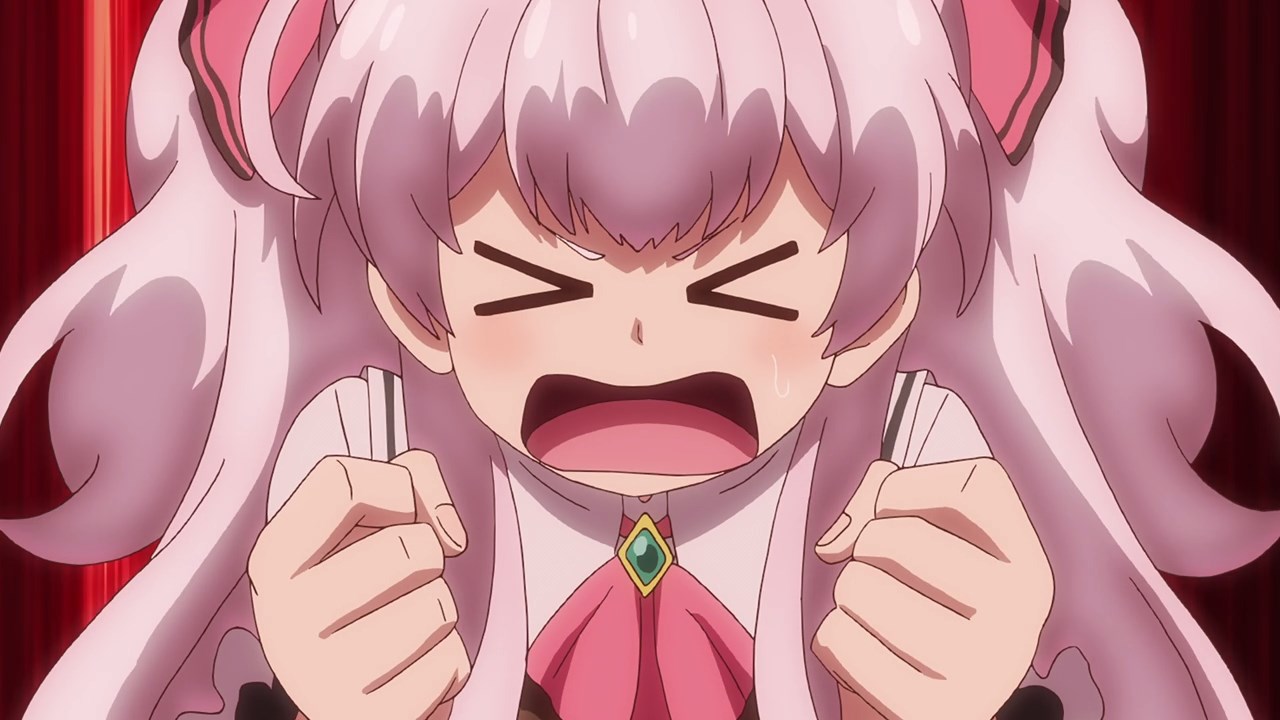 For Mile, she’s very excited to see a combining golem up-close, although it would be better if Mile made her own golem where she can pilot it. 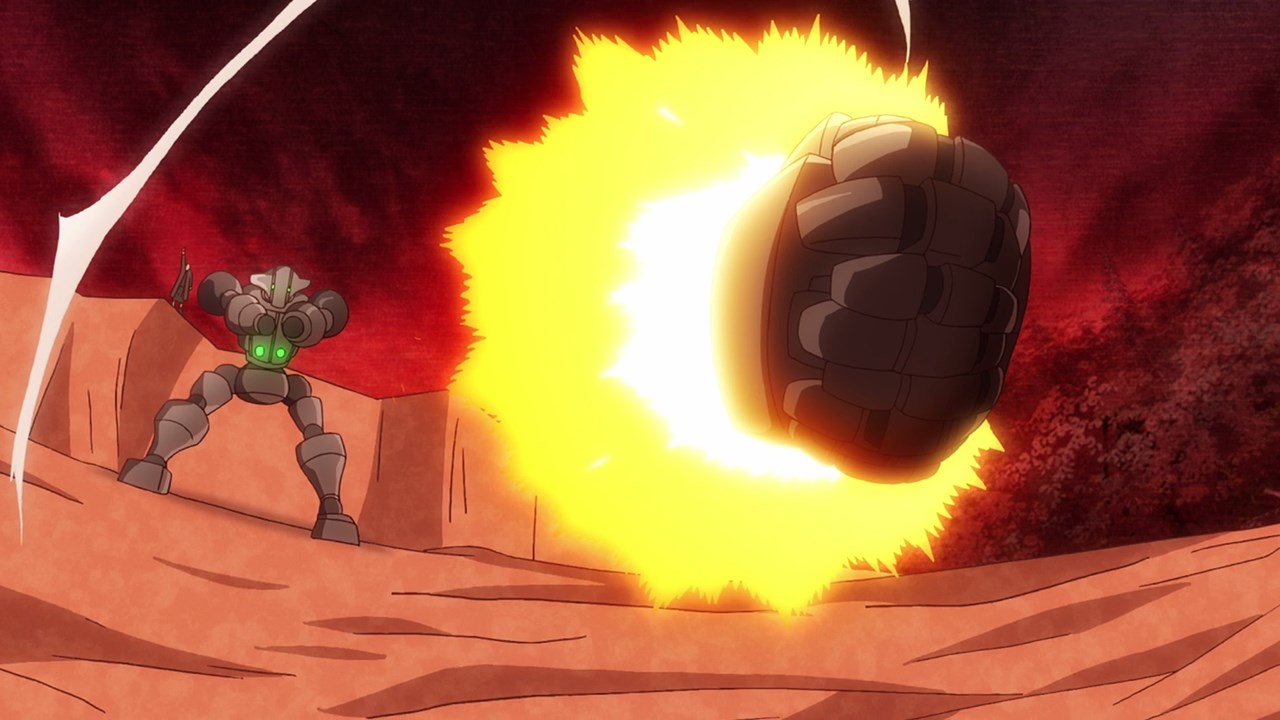 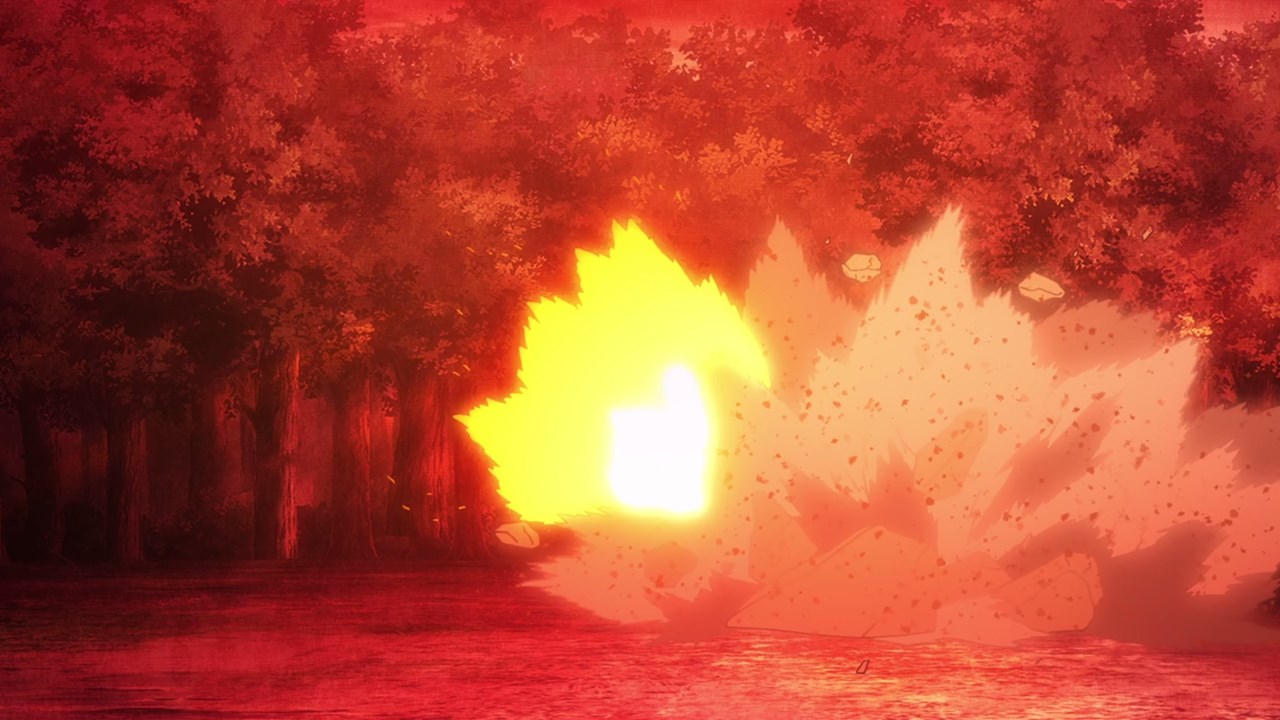 Unfortunately for Mile, her curiousity puts her in harm’s way as she got hit by a freakin’ rocket punch! Damn, say it ain’t so for our heroine! 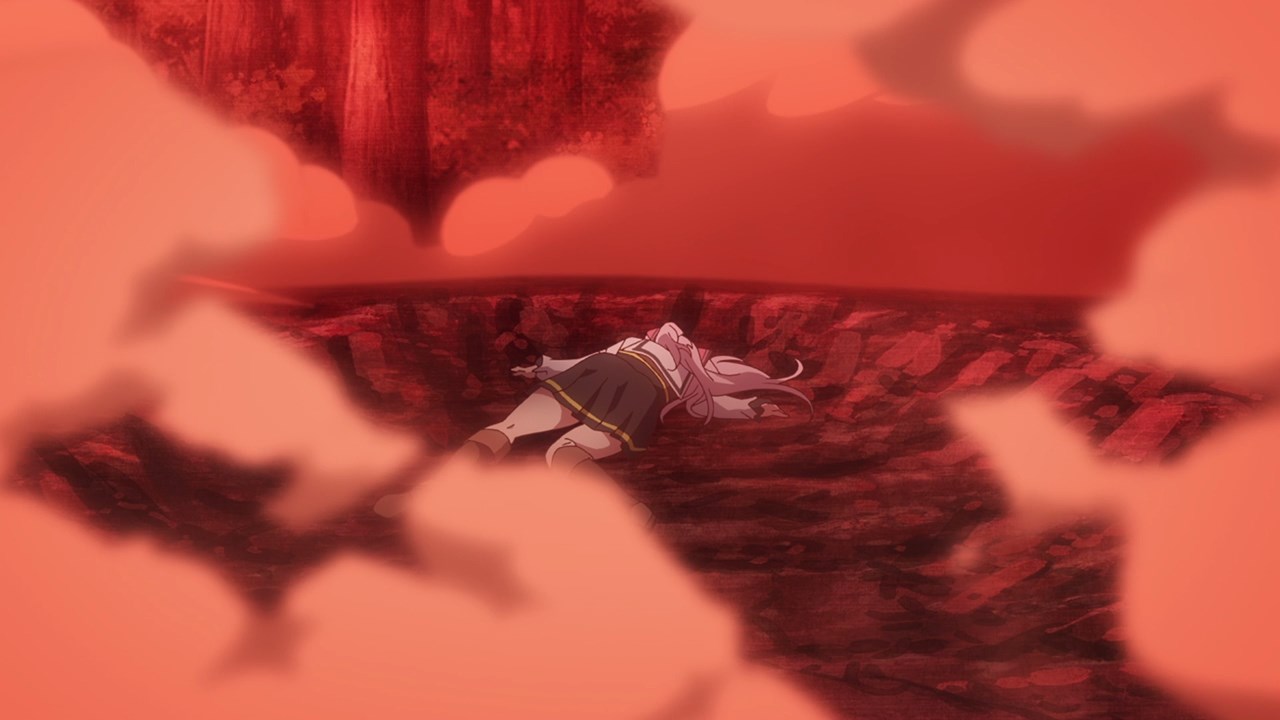 And although it would be better if it’s modeled after Yamcha’s death, it sucks that our heroine got knocked-out by a golem punch. 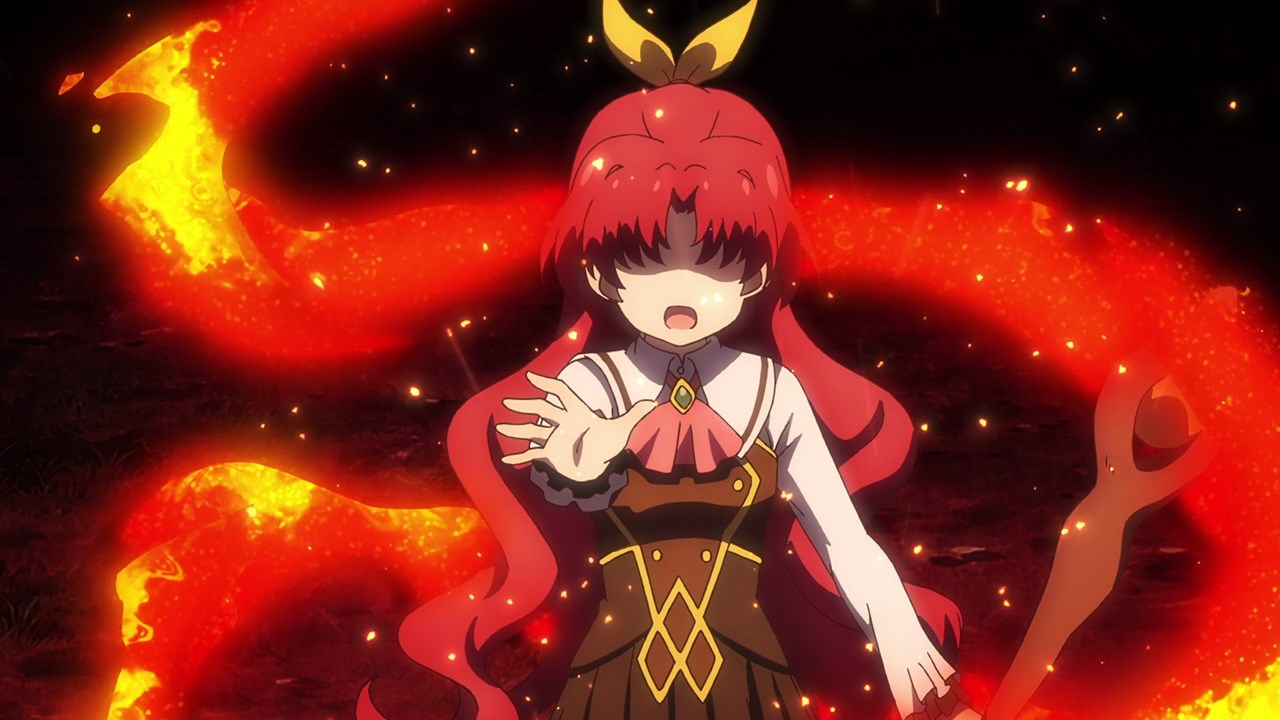 But Mile’s apparent death has angered Reina where she’s casting a powerful fire magic to destroy the golem. 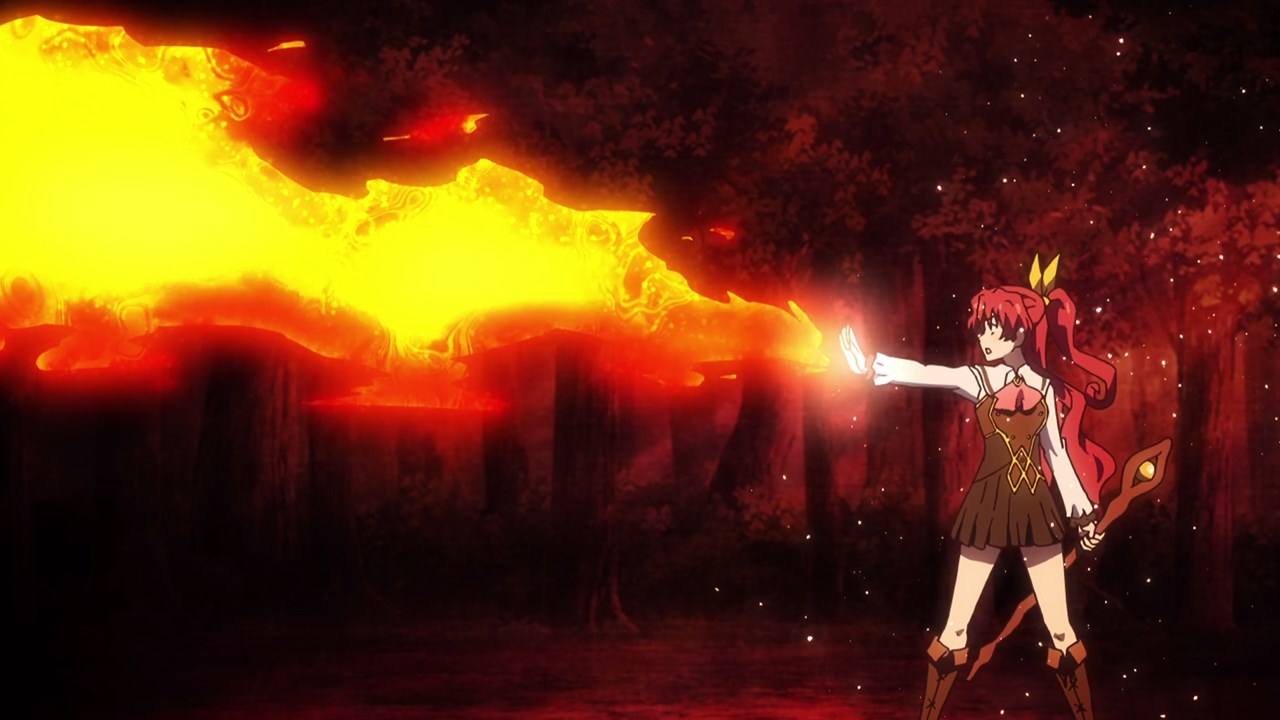 In any case, Reina casts Hellfire towards the golem, but I doubt that she can manage to burn her enemy into ash. 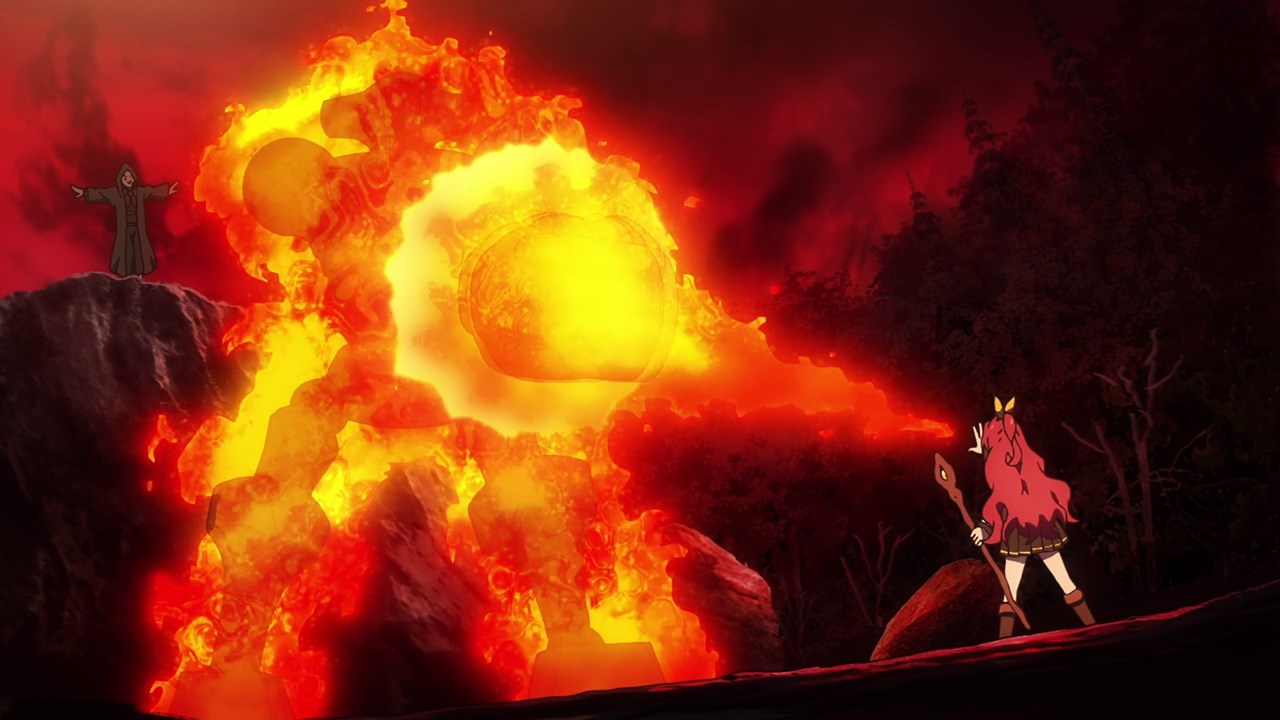 Unfortunately for Reina, not only her Hellfire is ineffective against the golem, but she’s gonna get knocked-out with its rocket punch. 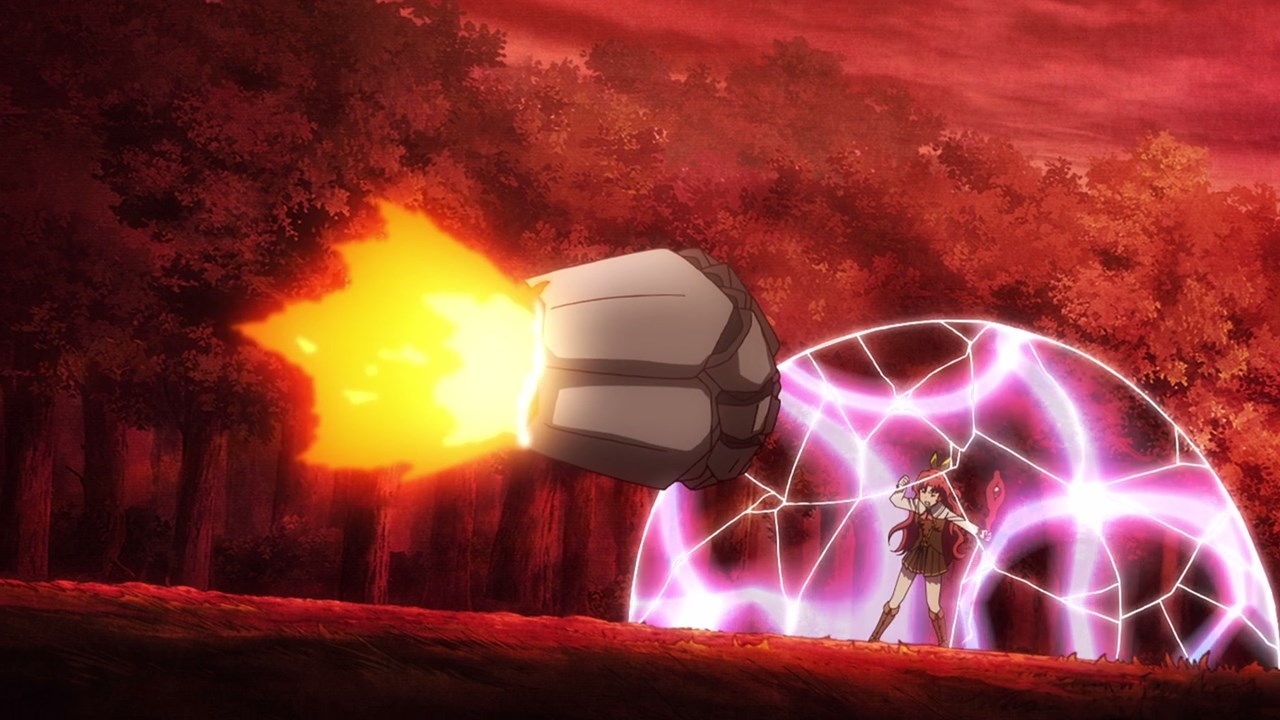 Luckily, someone casted a barrier which protected Reina from being killed. Then again, I wonder who put the barrier? 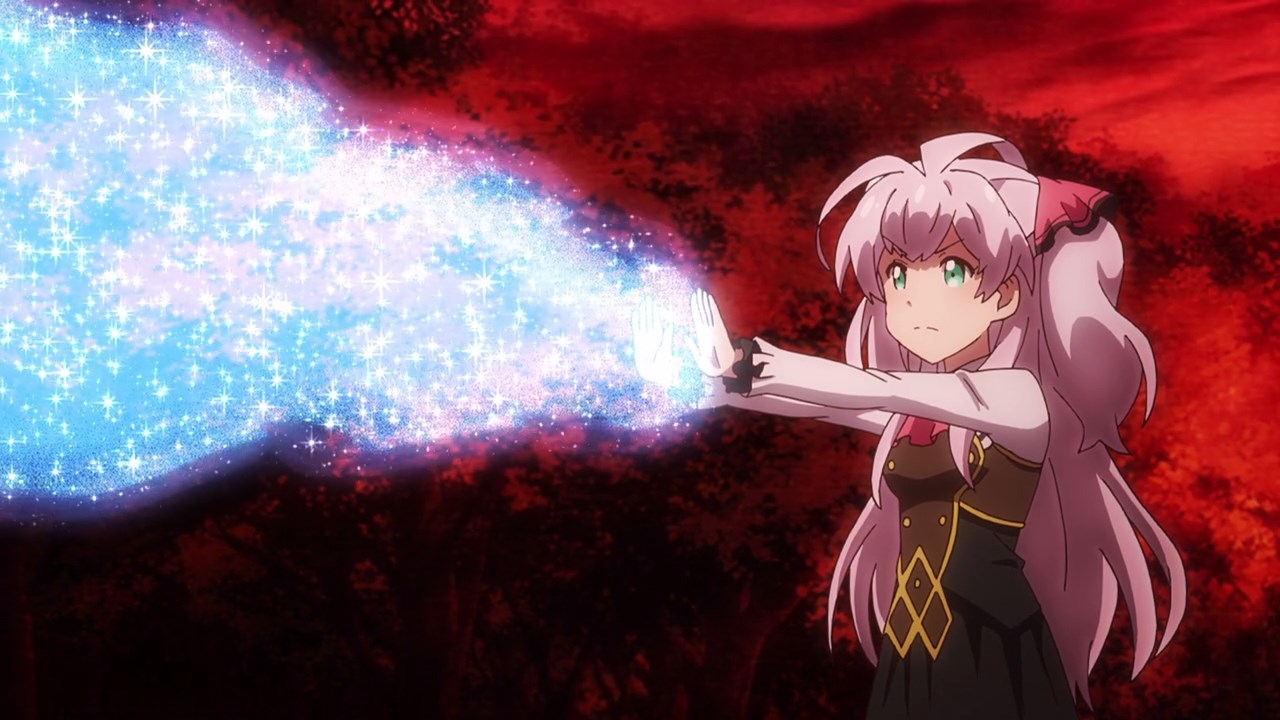 Turns out, it’s Mile where she’s not only alive, but also protected her friend. Glad that Mile is one tough girl. 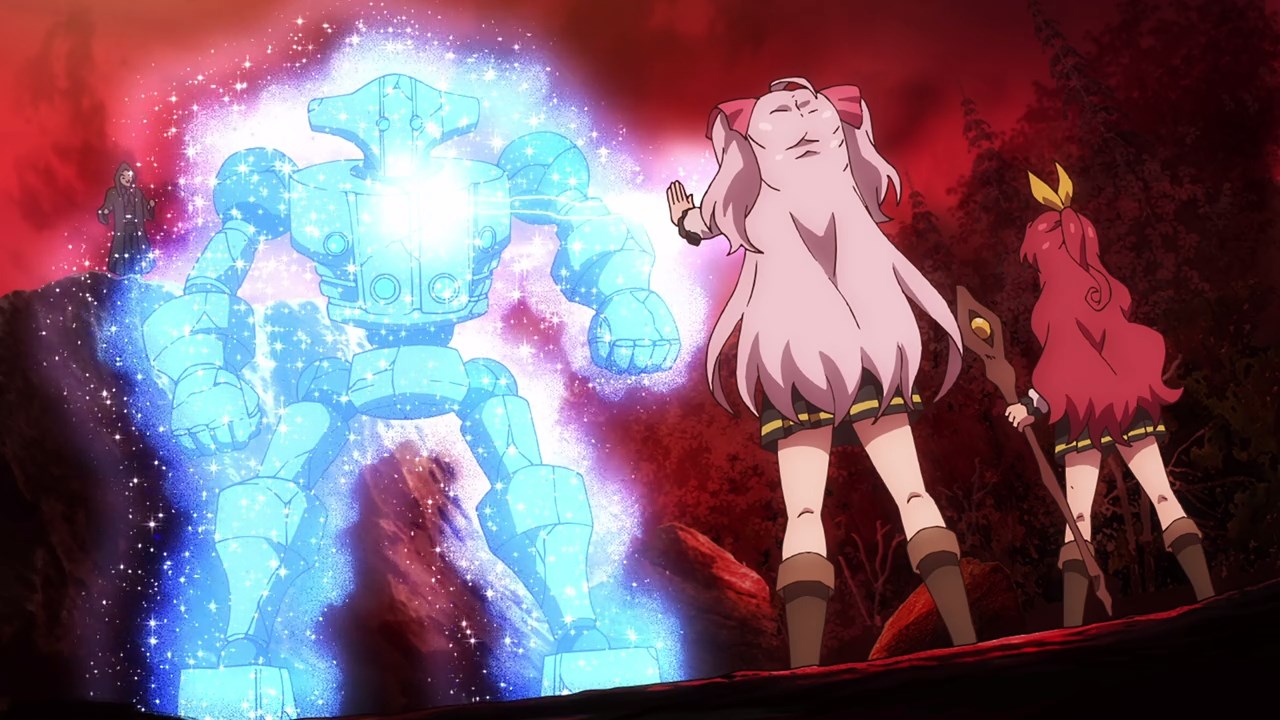 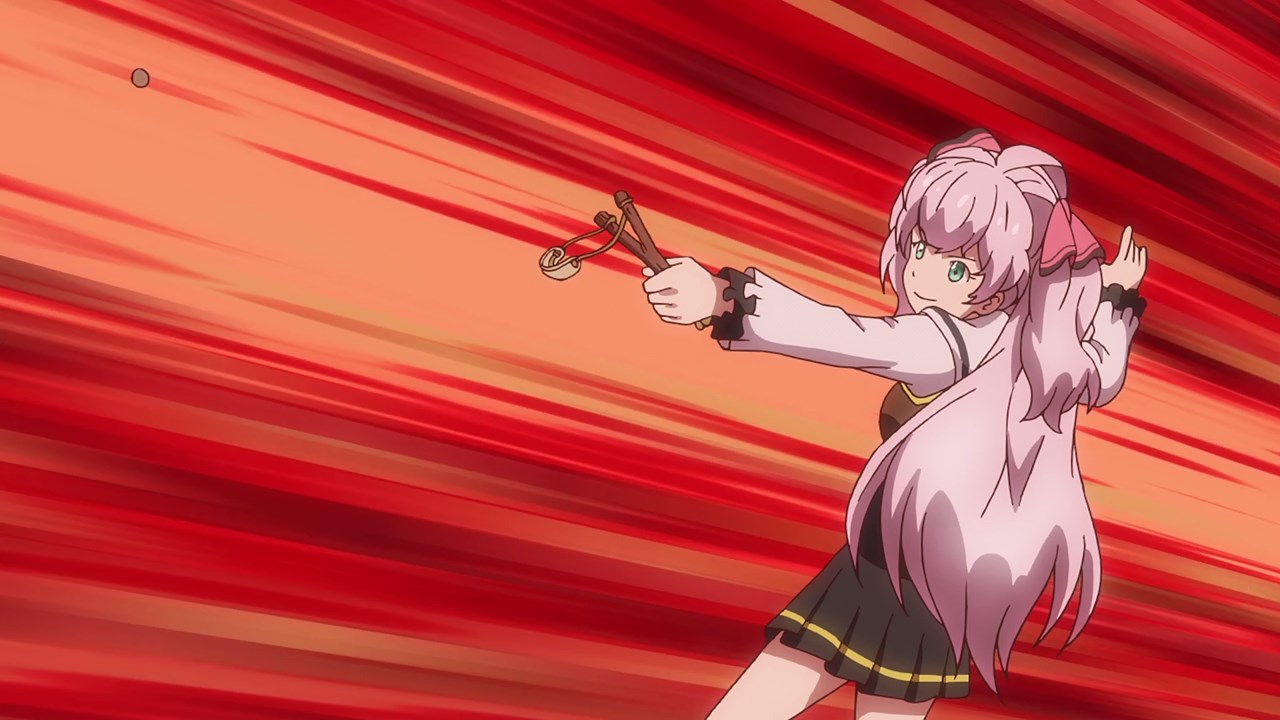 Then again, Mile uses her gained knowledge from her previous life as she fired a pebble from her trusty slingshot. 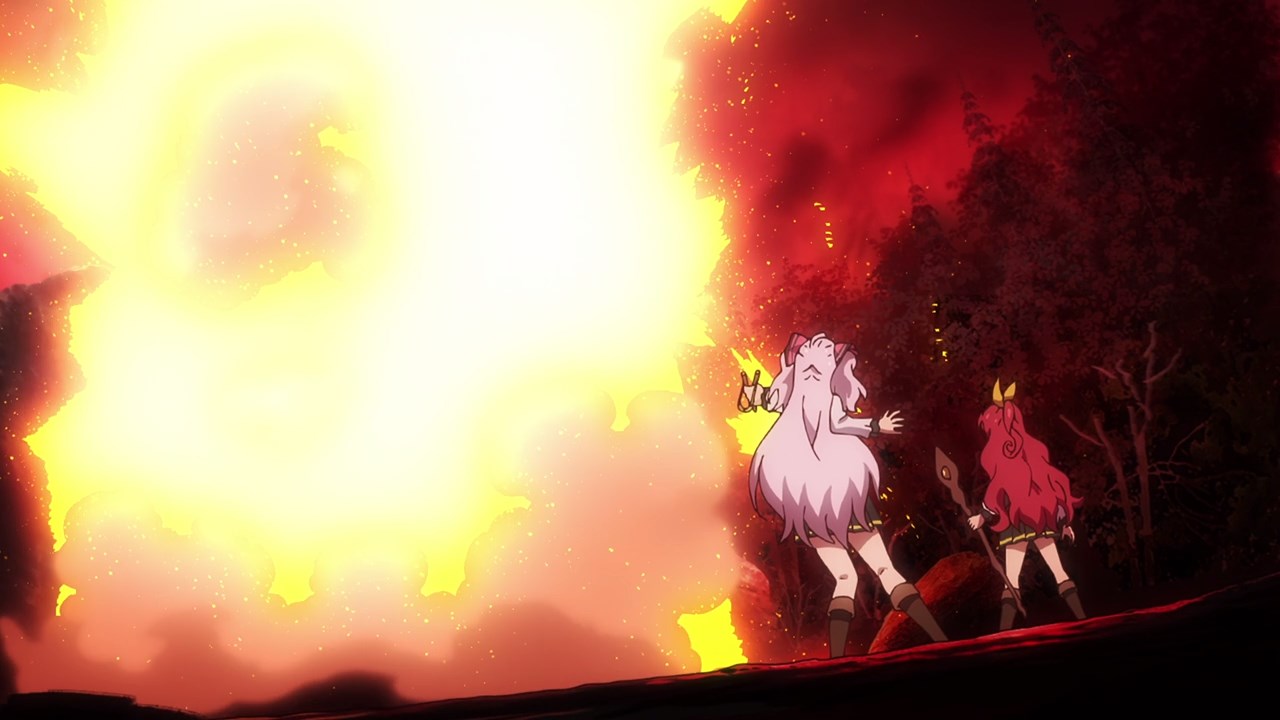 But as you can see, that takes care of the golem as Mile destroyed it with only a small rock.

Turns out that she applied thermal shock, where heating up the golem and then cooling it down would make its armor brittle and thus Mile can destroy the golem easily. 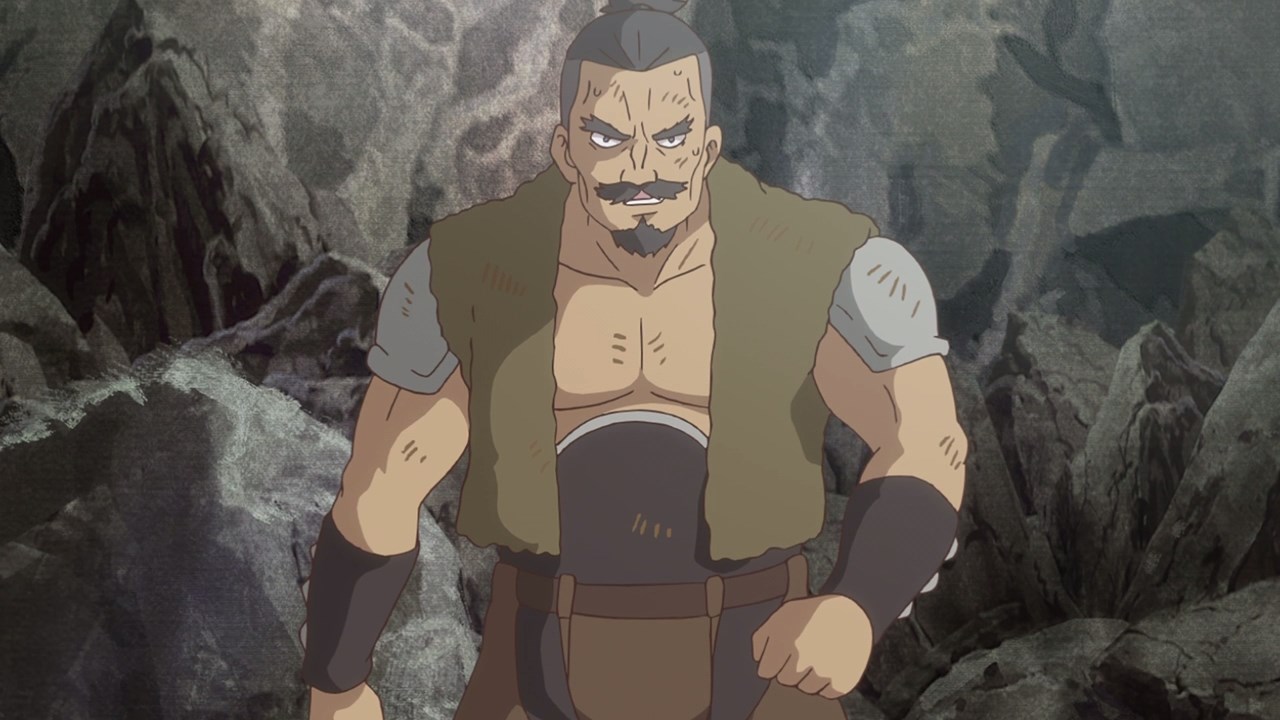 But of course, there’s this bandit leader as he won’t give up on stealing goods and turn everyone into slaves.

Um, he should have surrendered already because the Crimson Vow is stronger than they look and they already wrecked his fellow goons! 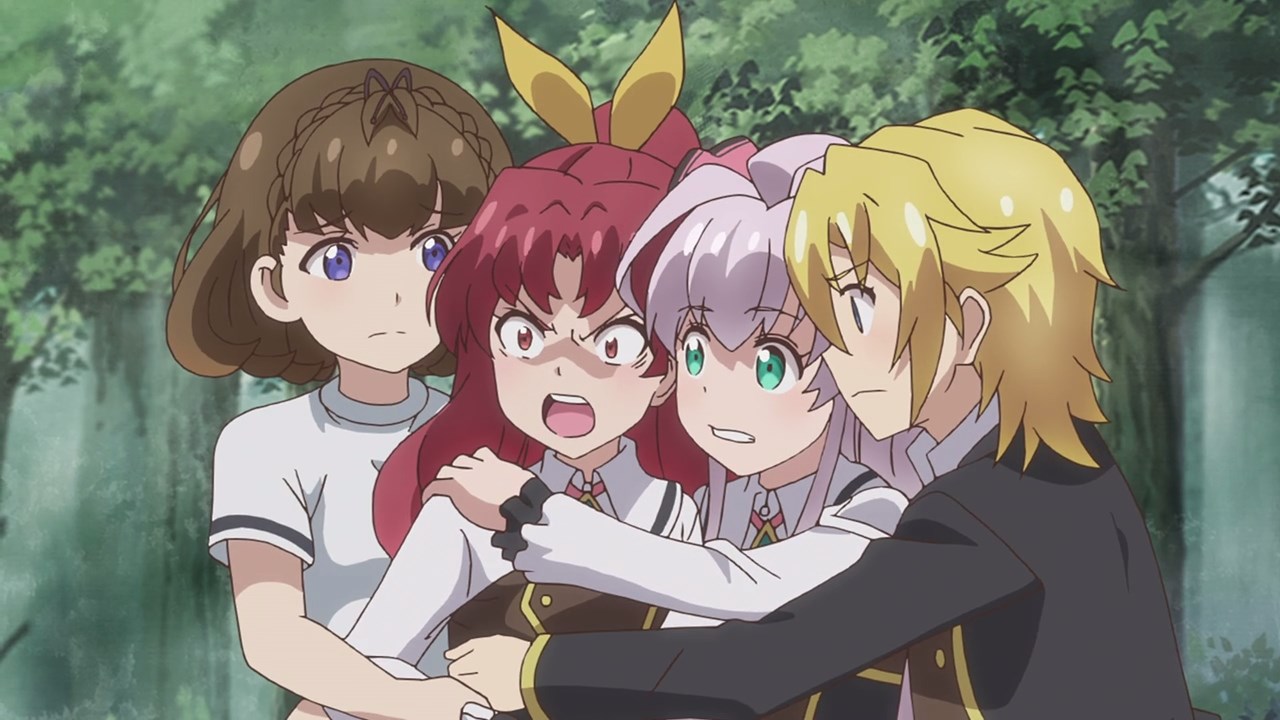 Unfortunately, that doesn’t take Reina well as she’s gonna kill the bandit leader with her Hellfire. Good thing her friends managed to stop Reina for causing much damage. 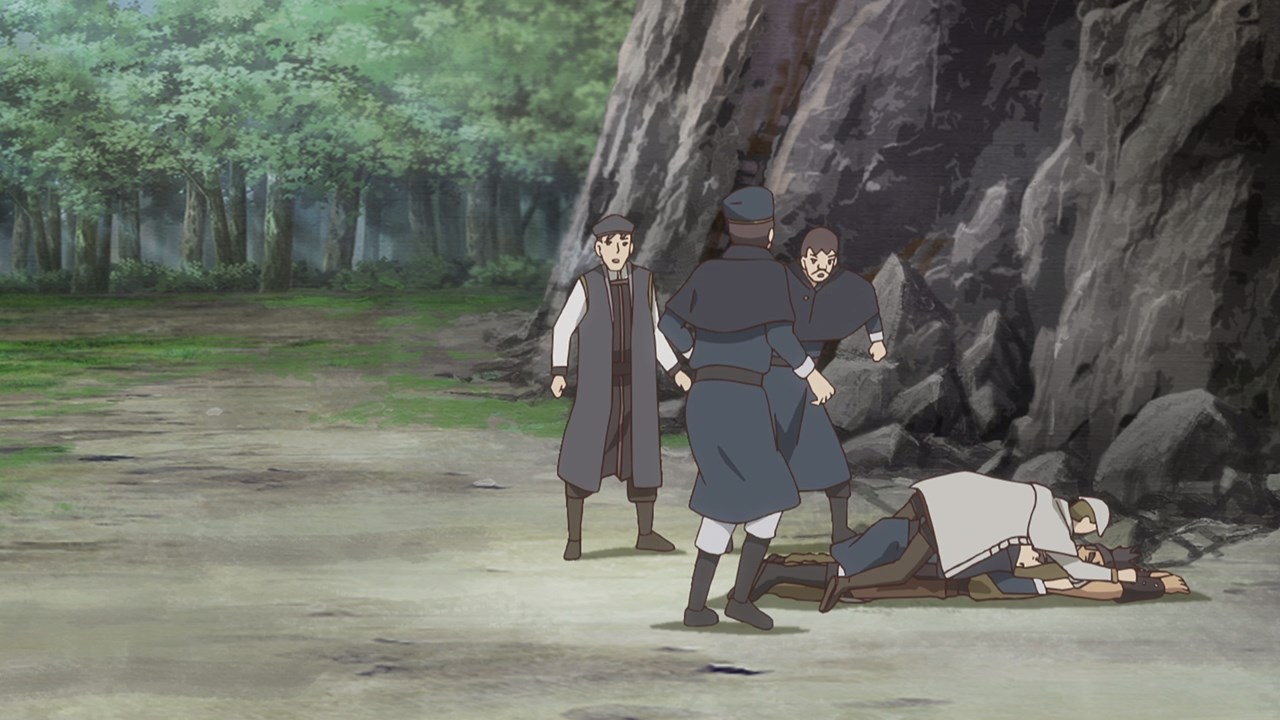 But as for the bandit leader, it appears that he got apprehended by these travelling merchants. In any case, looks like the bandits failed to rob the merchants. 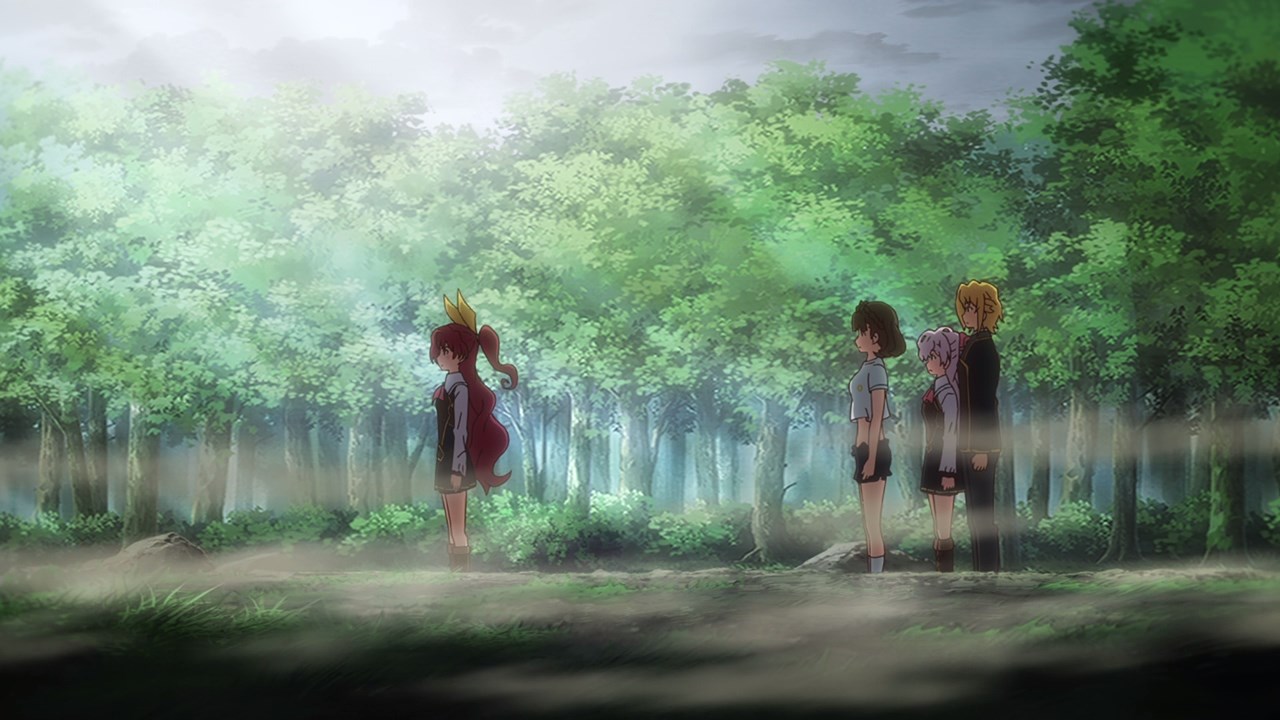 However, it appears that Reina will have to explain a lot to her friends in regards to her brash actions. Was her actions related to some trauma? We’ll never know for sure until the next episode.

For now, the Crimson Vow are safe as they finished their job of protecting the merchants. Still, I think Reina will need to calm herself down for the time being.