Posted on November 4, 2019 by benigmatica 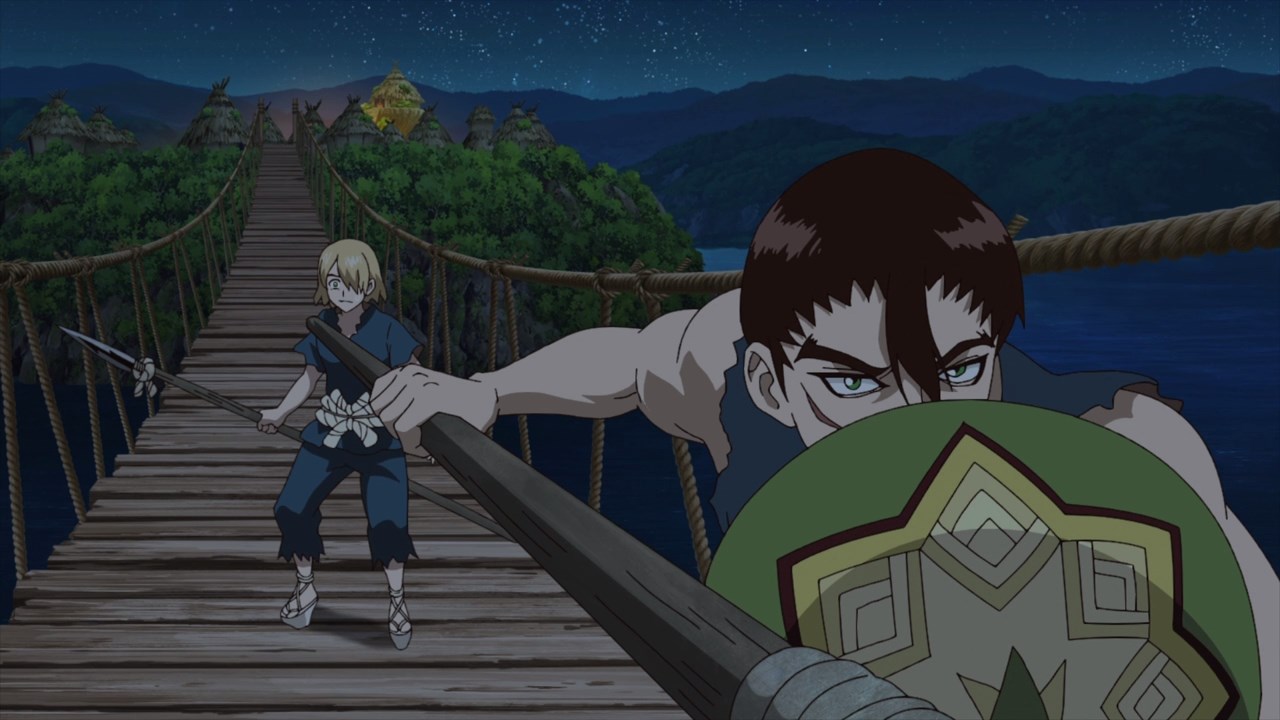 Here’s both Ginro and Kinro as they’re guarding the village as usual instead of partying all night long. And really, both guards need to be prepared for some unwanted guests. 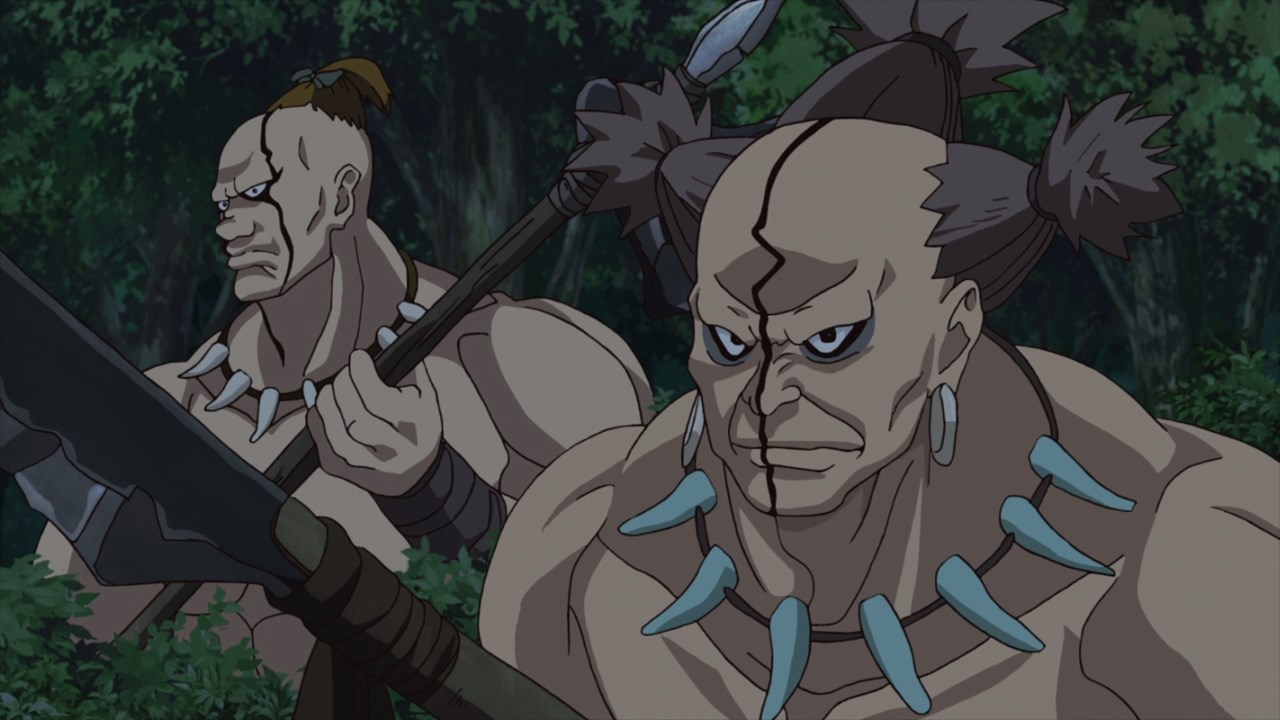 That’s because some goons have showed up to wreck Senku’s party! Come to think of it, they look like those bad dudes from Hokuto no Ken. 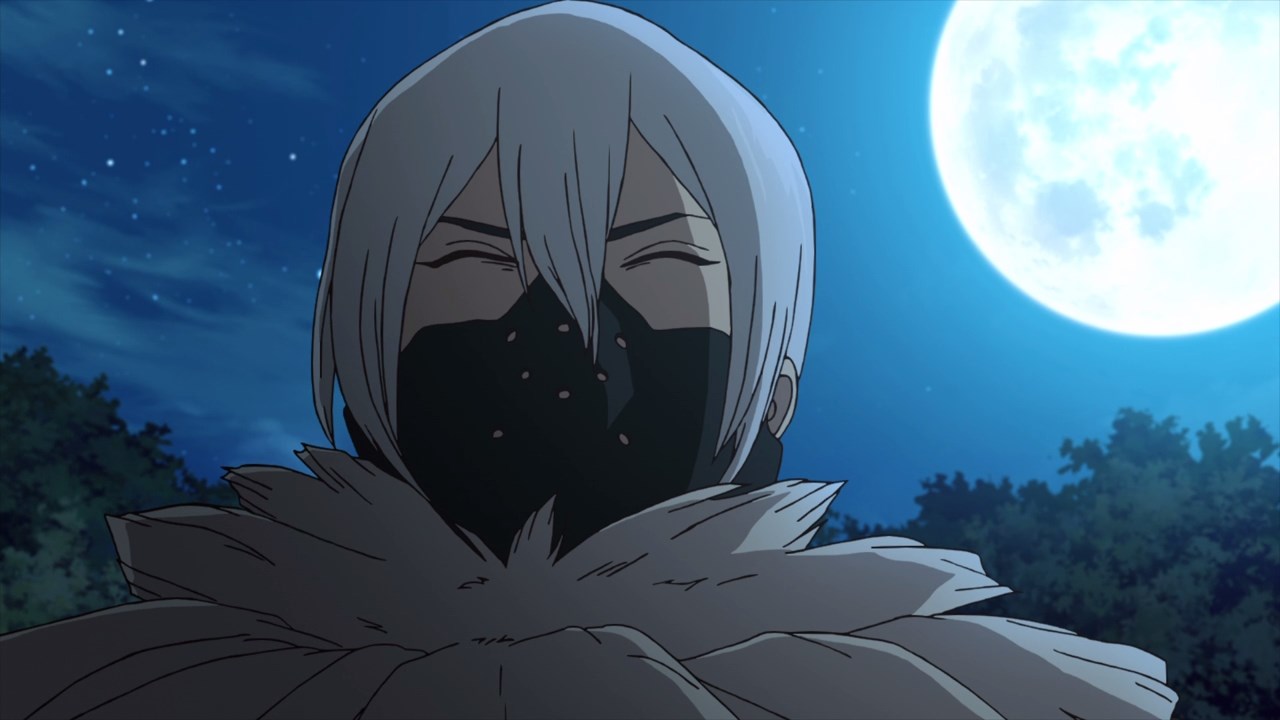 Also, these goons are joined by Tsukasa Shishio’s right hand man named Hyoga, which I have a bad feeling that he’s the second-strongest person that Tsukasa revived.

You know something, I feel that Shishio has horrible judgement when it comes to selecting people to de-petrify for his new world order, ’cause most of them are chaotic at worst! 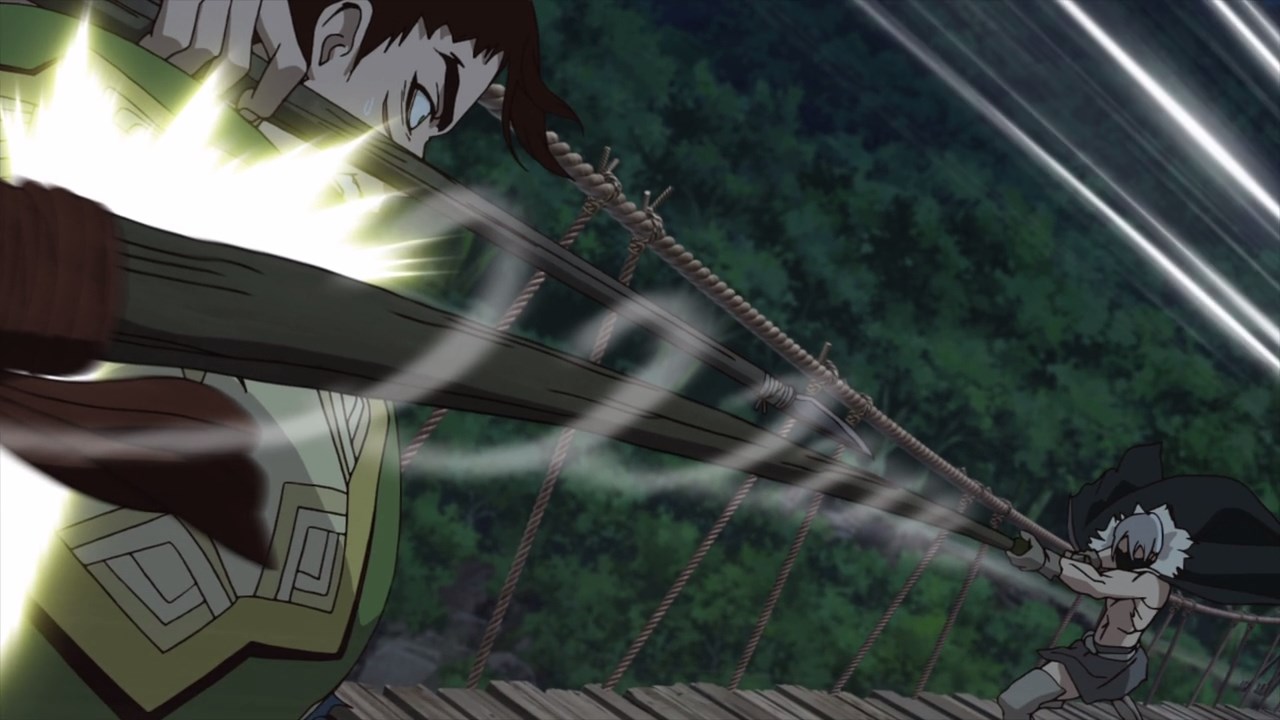 But anyways, looks like Kinro is having a hard time fighting against Hyoga because he twists his spear to not only disorient his opponent, but thrust harder.

Oh, and let’s not forget that Kinro is near-sighted so it’ll be fatal for him since he can’t see Hyoga’s attack from a distance. 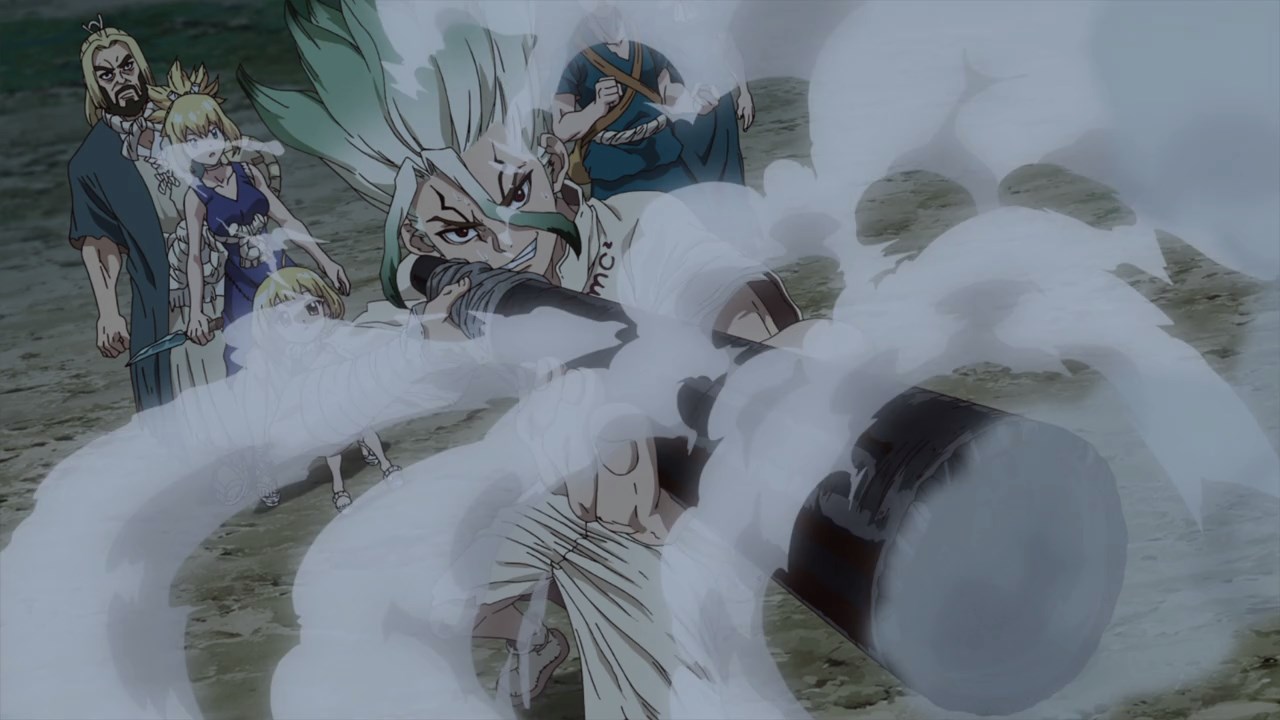 Fortunately, Kinro is saved when Senku created a makeshift firearm to scare Hyoga and his goons. 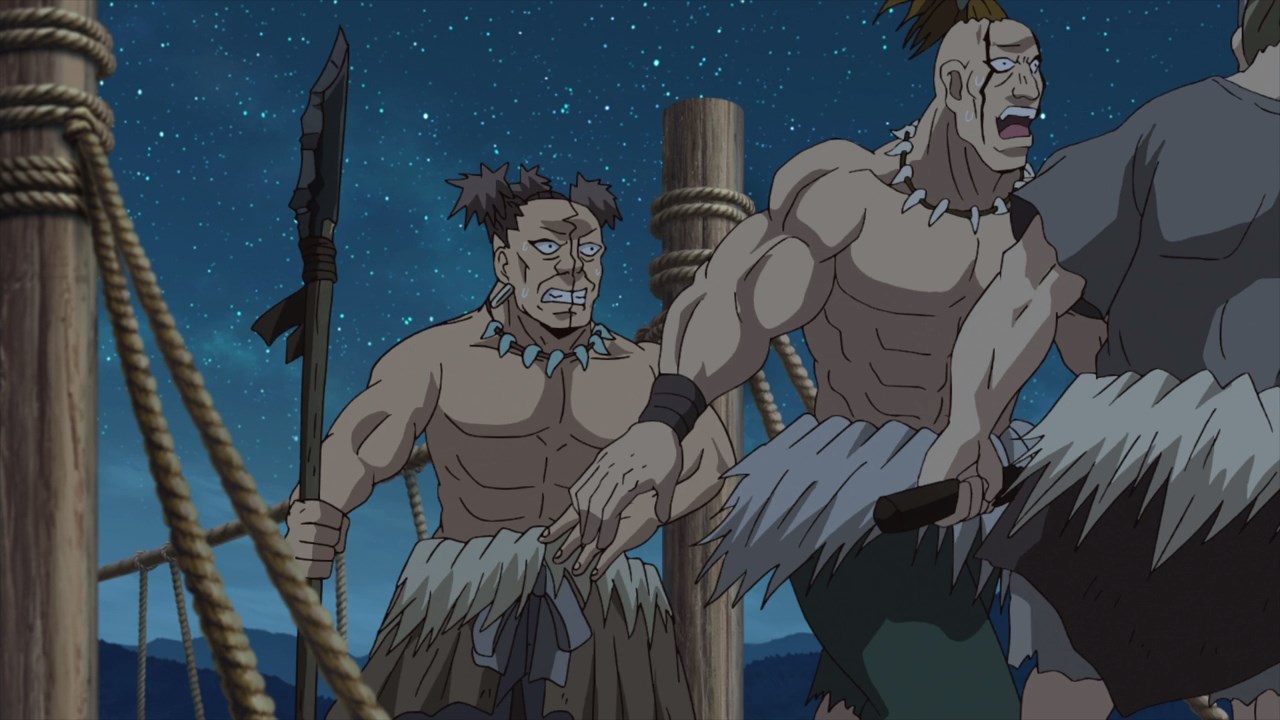 Well, Hyoga is not fazed by Senku’s flintlock musket, but his allies got scared that they ran away.

Still, they’ll return to terrorize Ishigami Village… once the right conditions are met. Of course for Senku, he really needs to do something to counter Tsukasa Shishio and his Empire of Might. 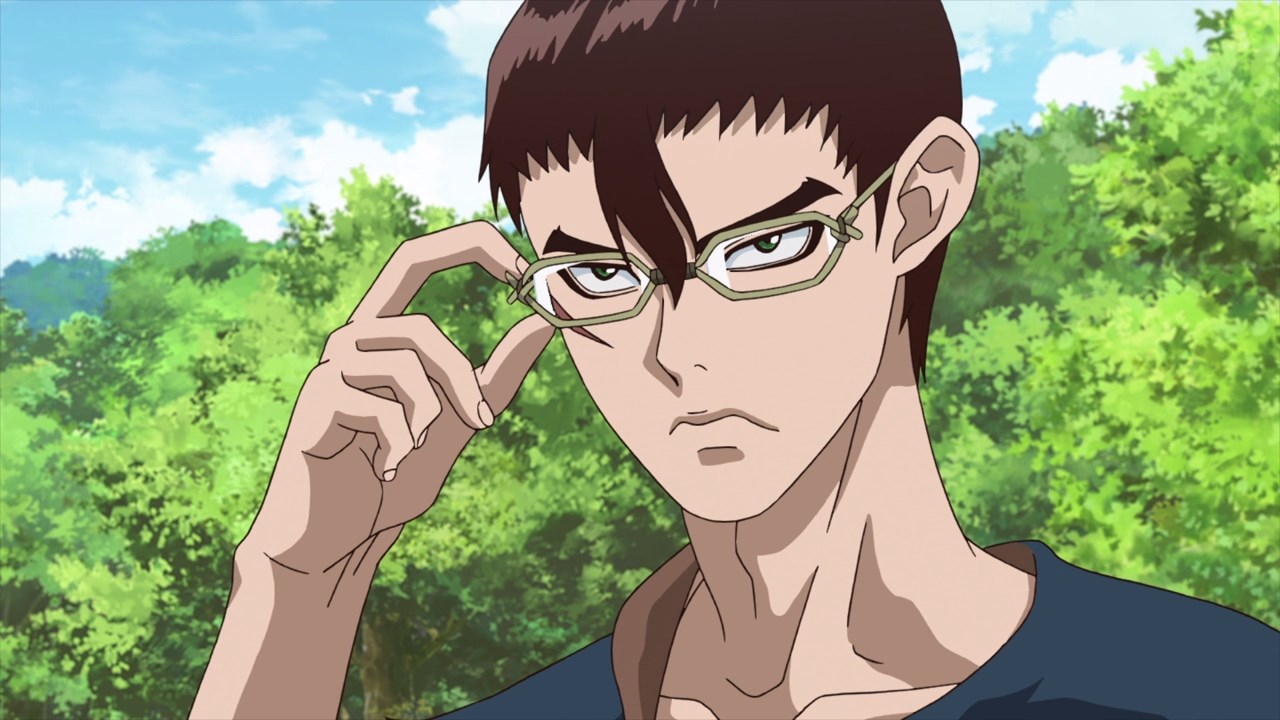 So first of all, it’s time for Senku to give some prescribed eyeglasses to Kinro in order to mitigate his nearsightedness. 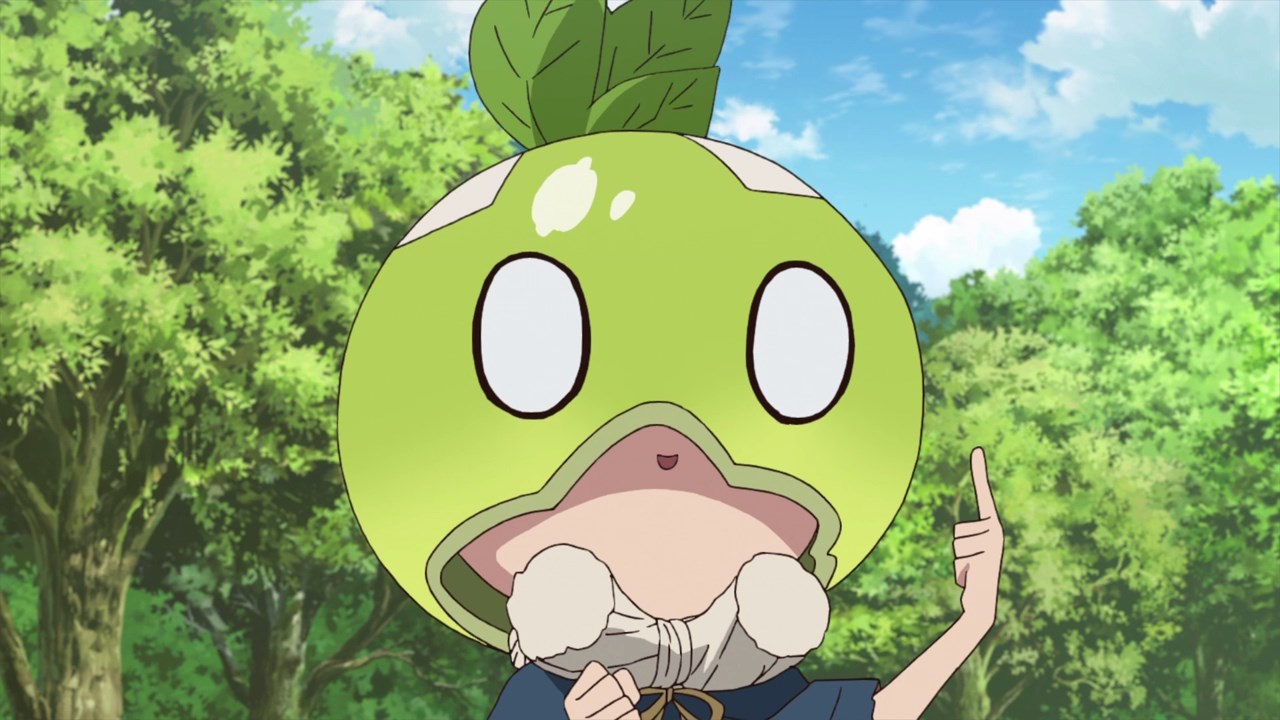 Also, Suika got her watermelon head back, complete with corrective lens that would help her see better. Good thing Senku managed to create a pair of glasses for both Kinro and Suika. 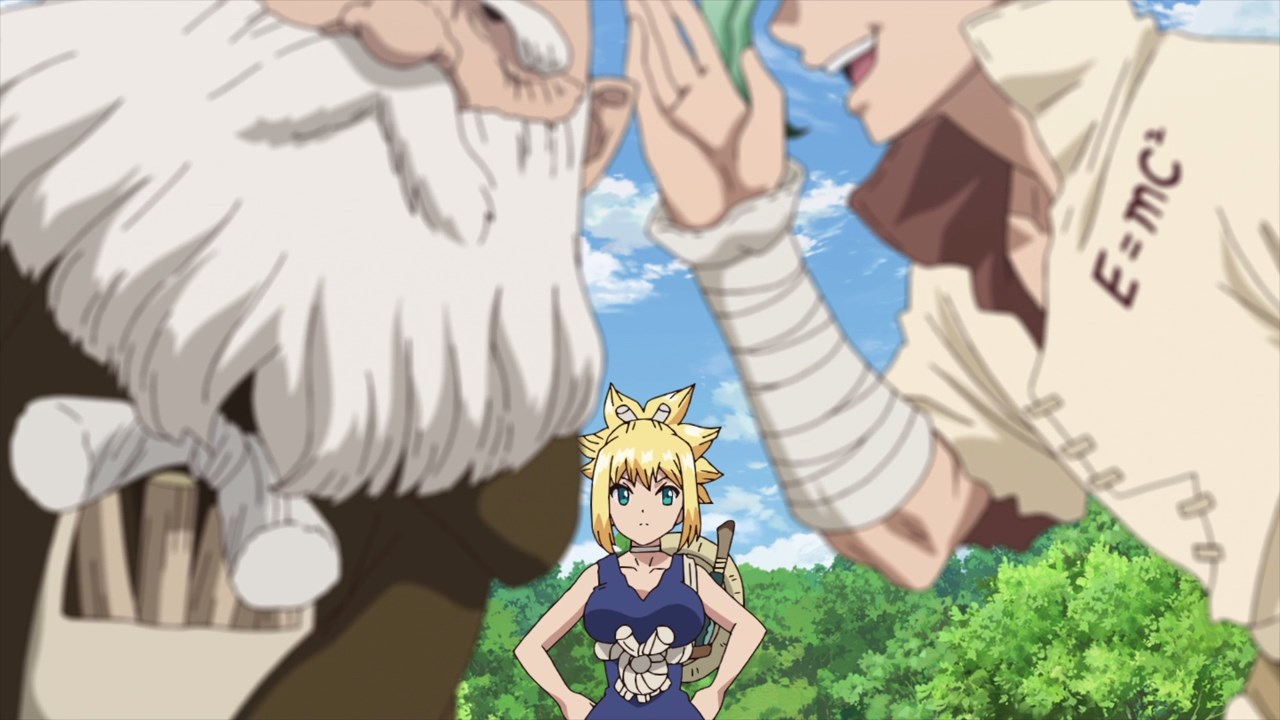 Speaking of Senku, he whispered Kaseki in his new project in which this old artisan will put his craftsmanship to greater heights.

And once he heard Senku’s plans, Kaseki got excited that he flexed his muscles and ripped his clothes off.

Um, I hope that Kaseki got some spare clothes but more importantly, I’m curious on what he’ll make in the future? 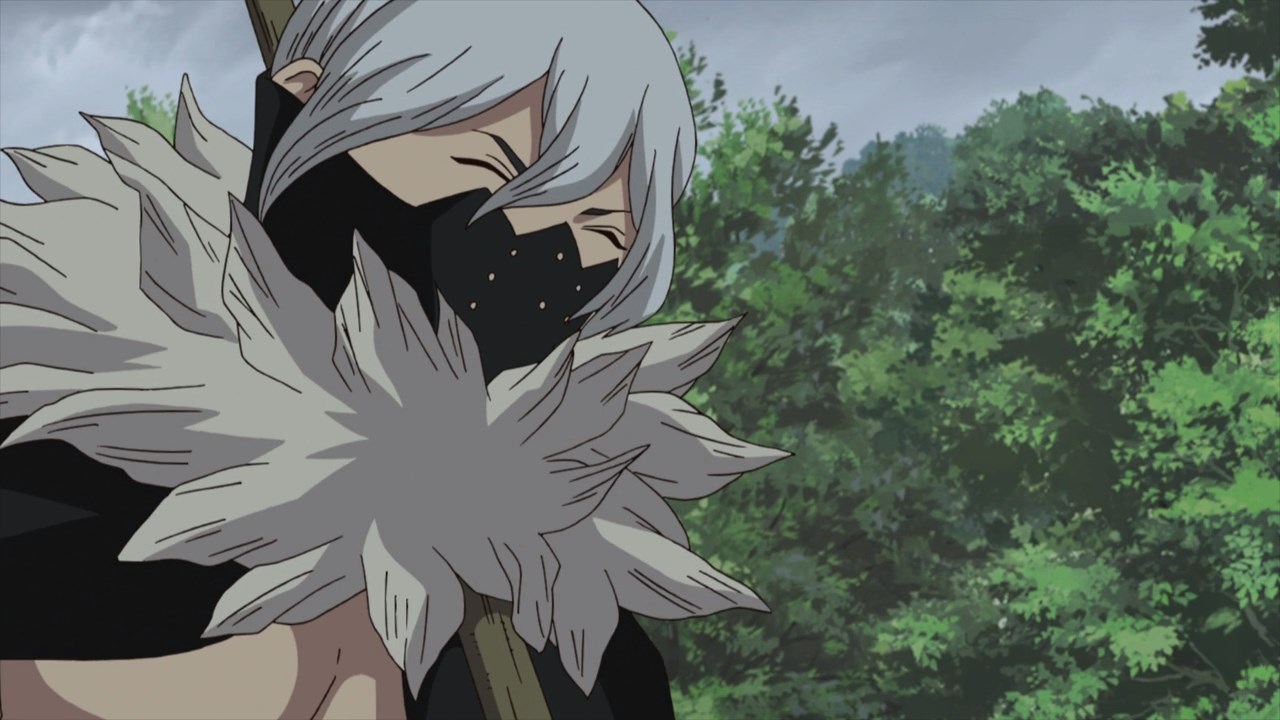 Let’s move onto Round 2 between Ishigami Village and the Empire of Might as Hyoga and his goons have arrived during a storm.

Now, Hyoga’s gang had the advantage here because having a storm means that flintlocks and bombs are ineffective. So, what will Senku do since his new firearms won’t work when there’s strong wind and rain? 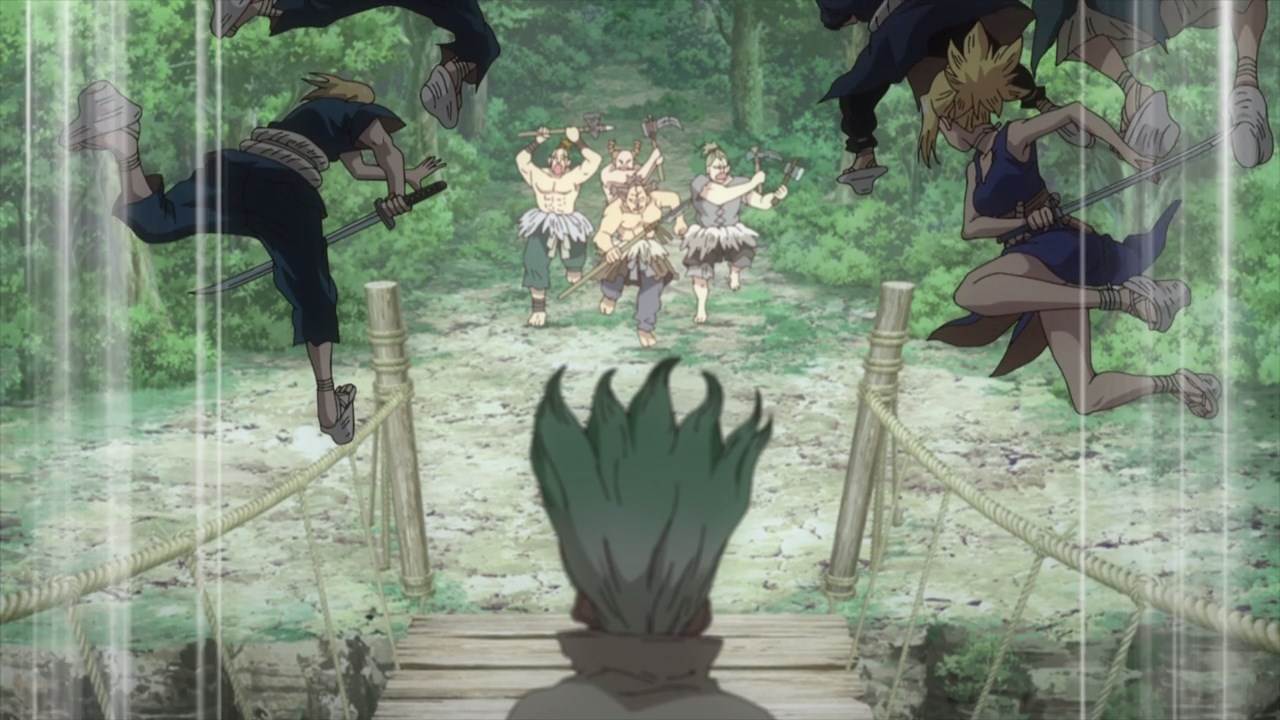 Well, here’s something that surprised me a lot as Kohaku and the rest are wielding swords. Wait, did Kaseki made katanas as their weapon to counter the Empire of Might? 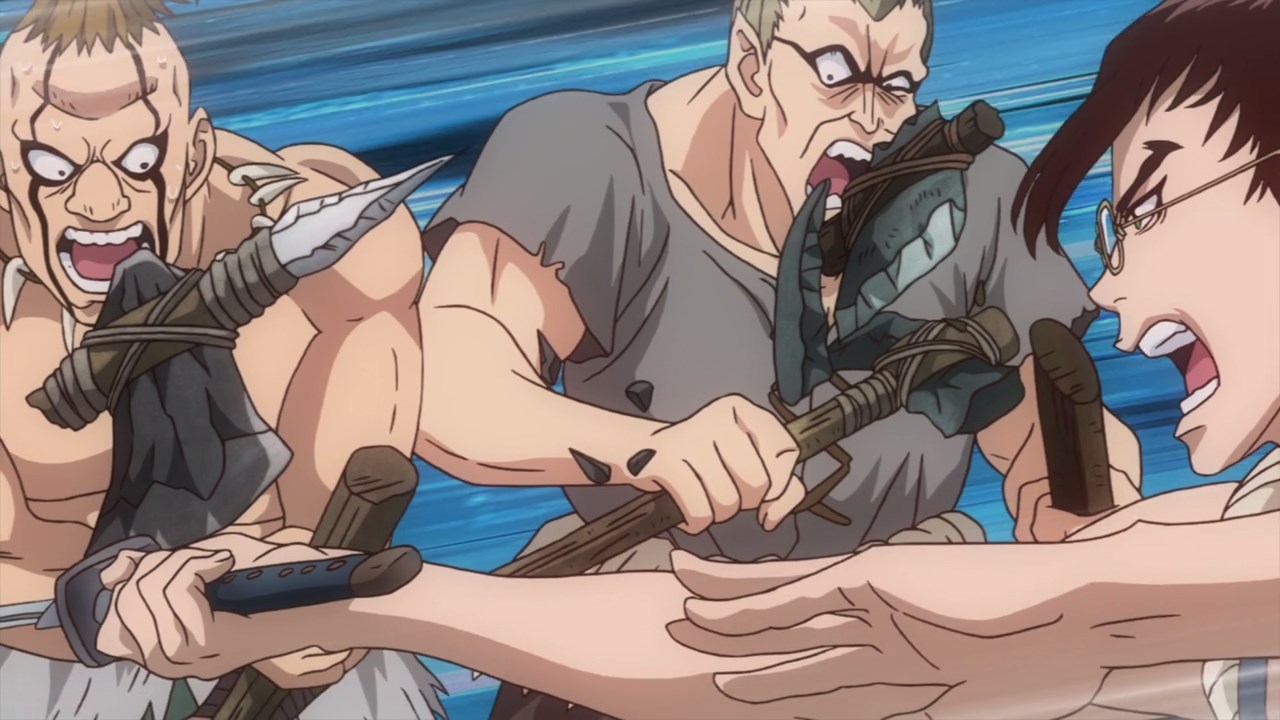 Why of course and as you can see, Kinro can cut these spears like twigs. Well, looks like these goons are no match against Senku’s new weapons. 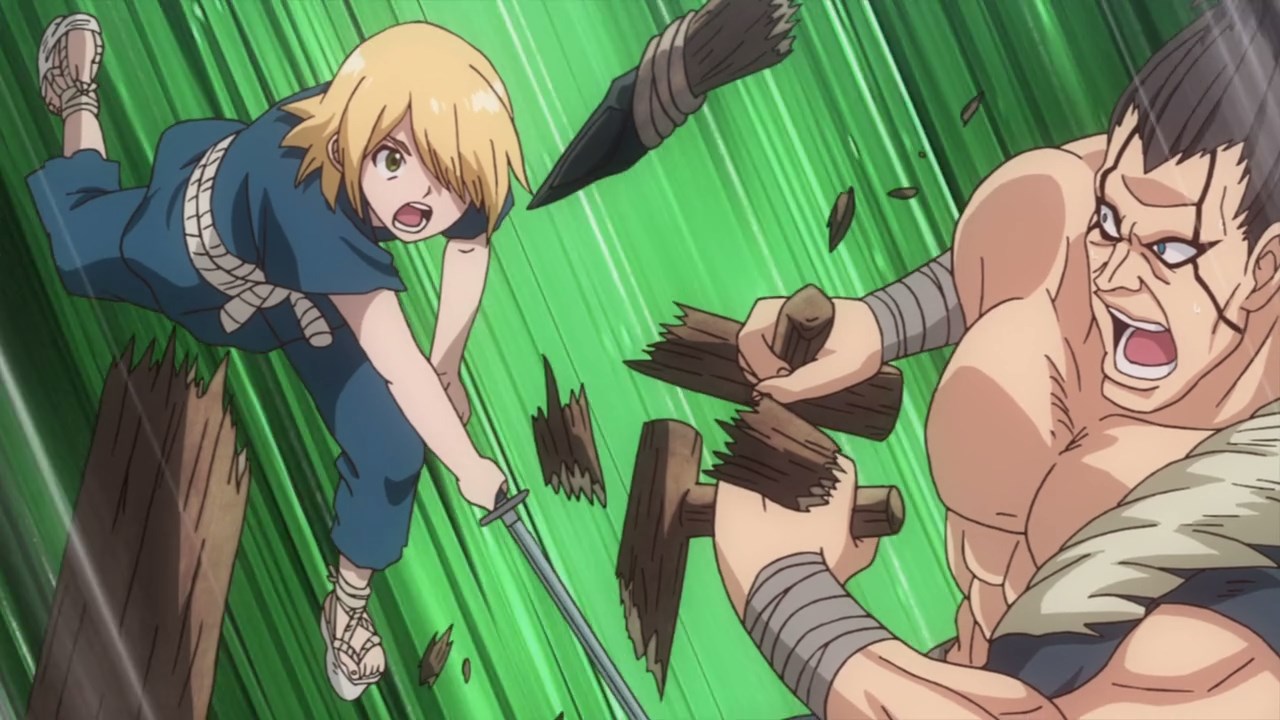 At this point, it looks like Hyoga and his goons have failed to destroy Ishigami Village now that they went to the Iron Age. 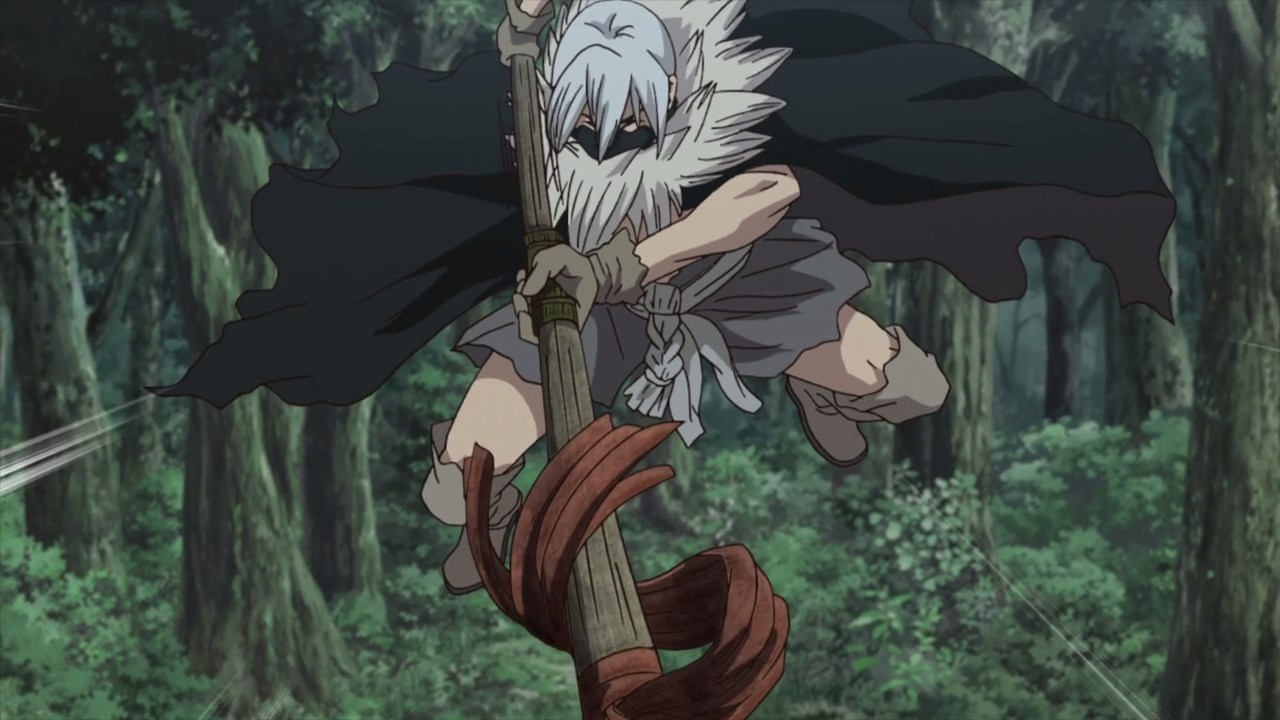 But speaking of Hyoga, it seems that despite having his allies running away, Tsukasa’s strongest warrior is still standing as his kudayari and his Kanryu-style spearmanship will obliterate anyone. 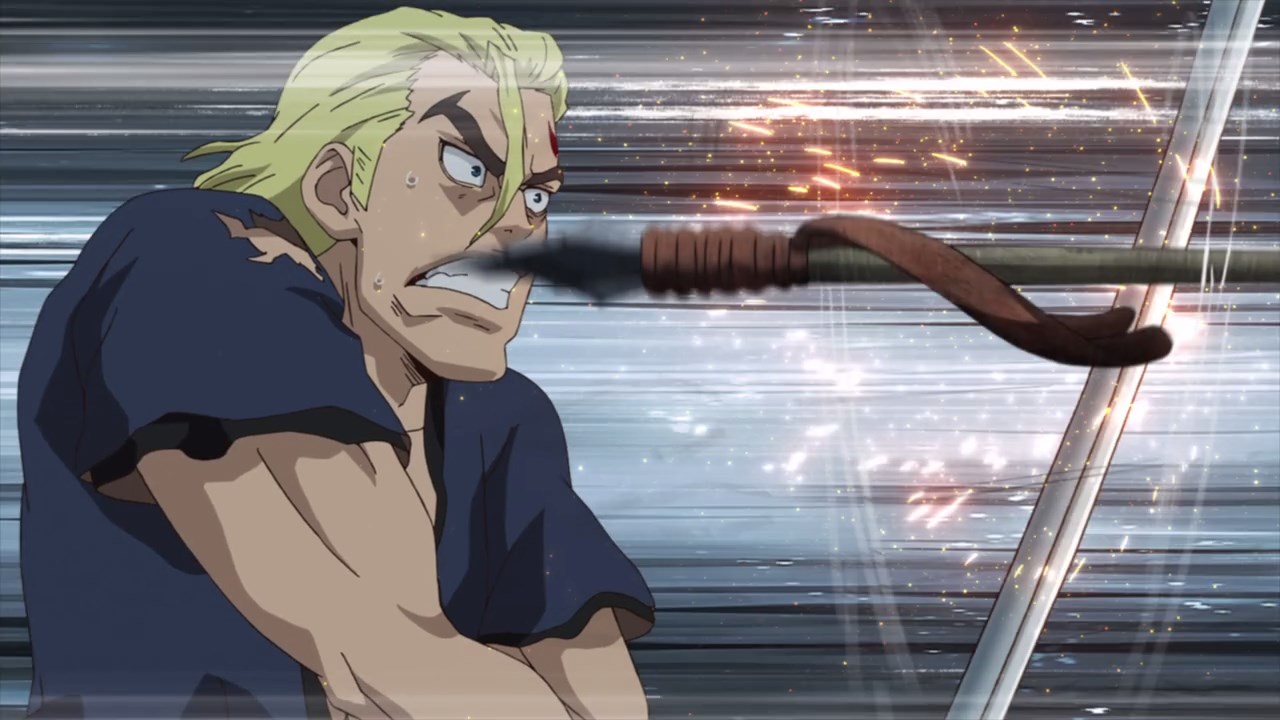 This includes Magma where despite wielding a katana, he couldn’t stand a chance against Hyoga!

You know, it would be worse for Magma if he’s still using primitive weapons should he became a village chief. 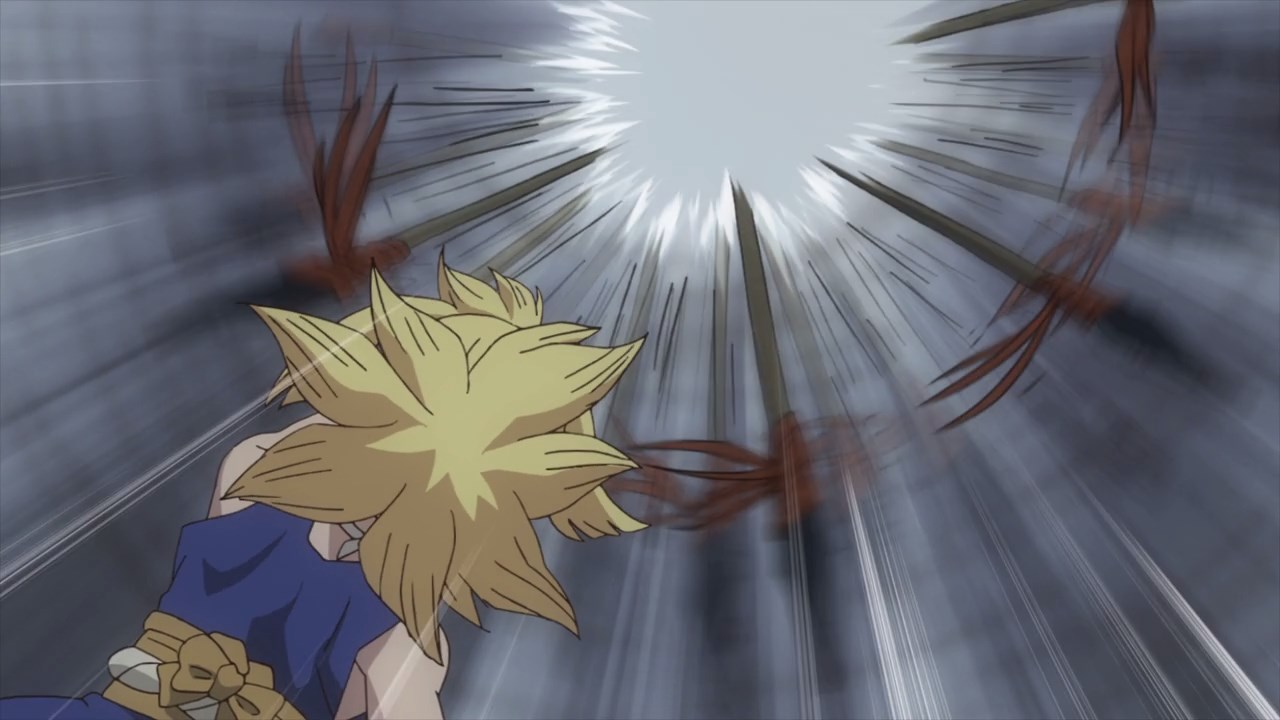 Even Kohaku couldn’t close the distance as Hyoga’s spear technique is deadly and unpredictable. But yes, it’s clear that Tsukasa Shishio and Hyoga are a threat. 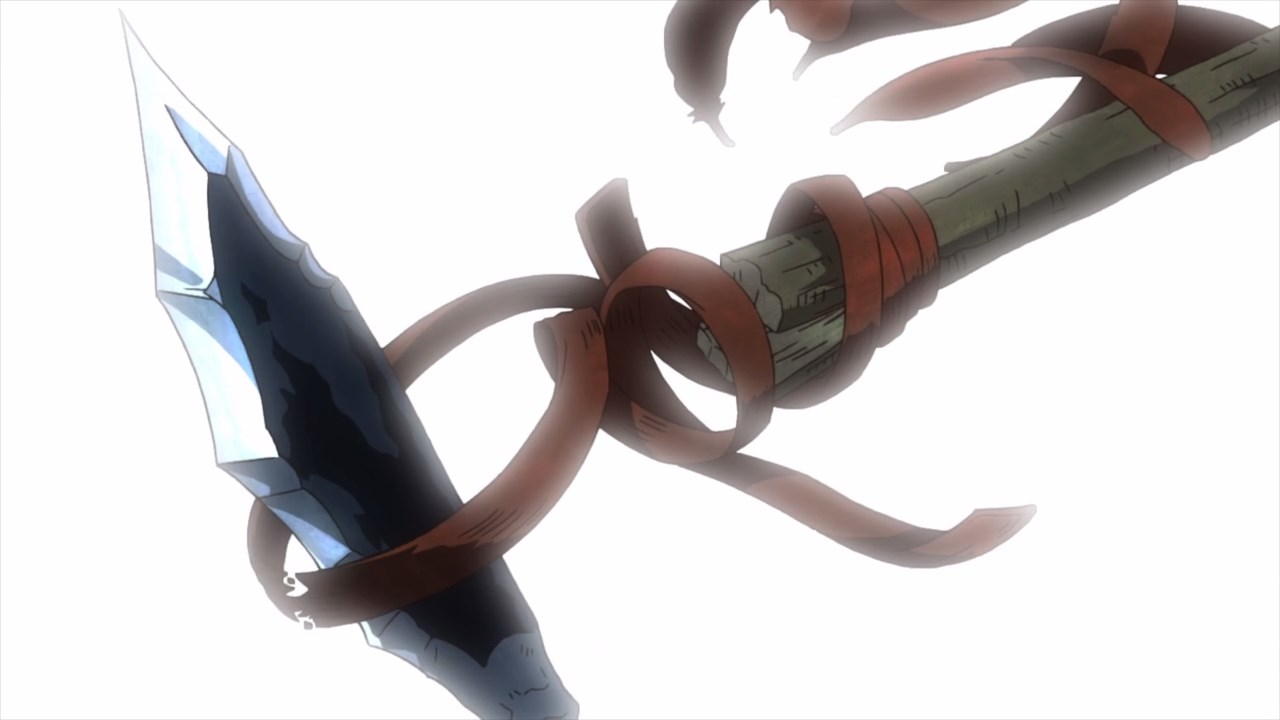 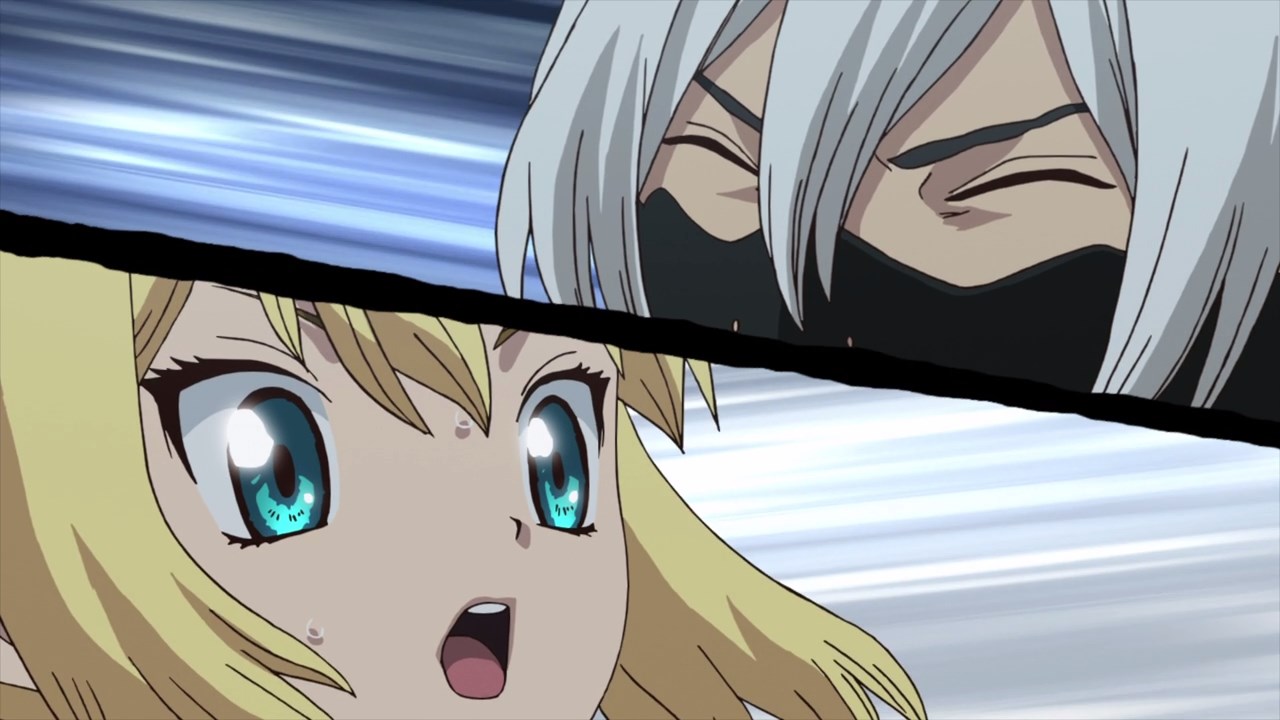 Suddenly, Hyoga’s kudayari got broken upon twisting it. While Kohaku is safe, it appears that someone mess up his favorite weapon. 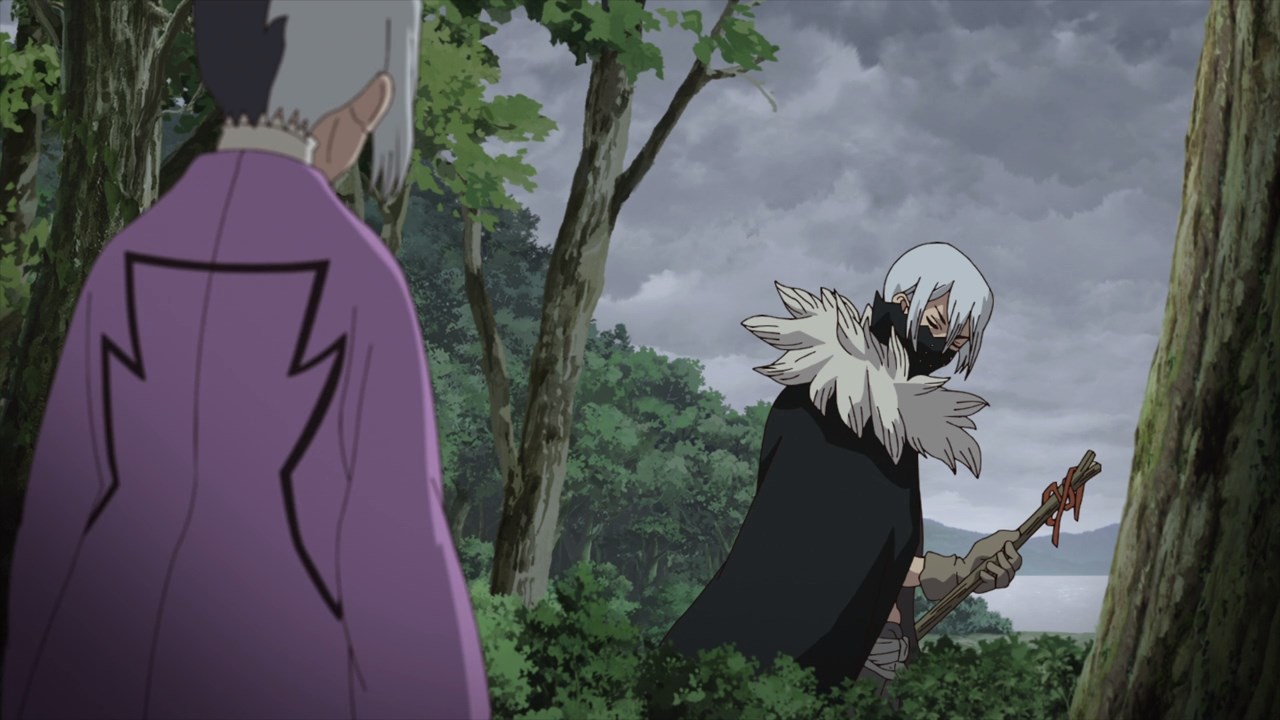 In fact, Hyoga suspects that there’s a traitor among the ranks. So, he sets his eyes onto Gen Asagiri as Hyoga doesn’t trust this mentalist. 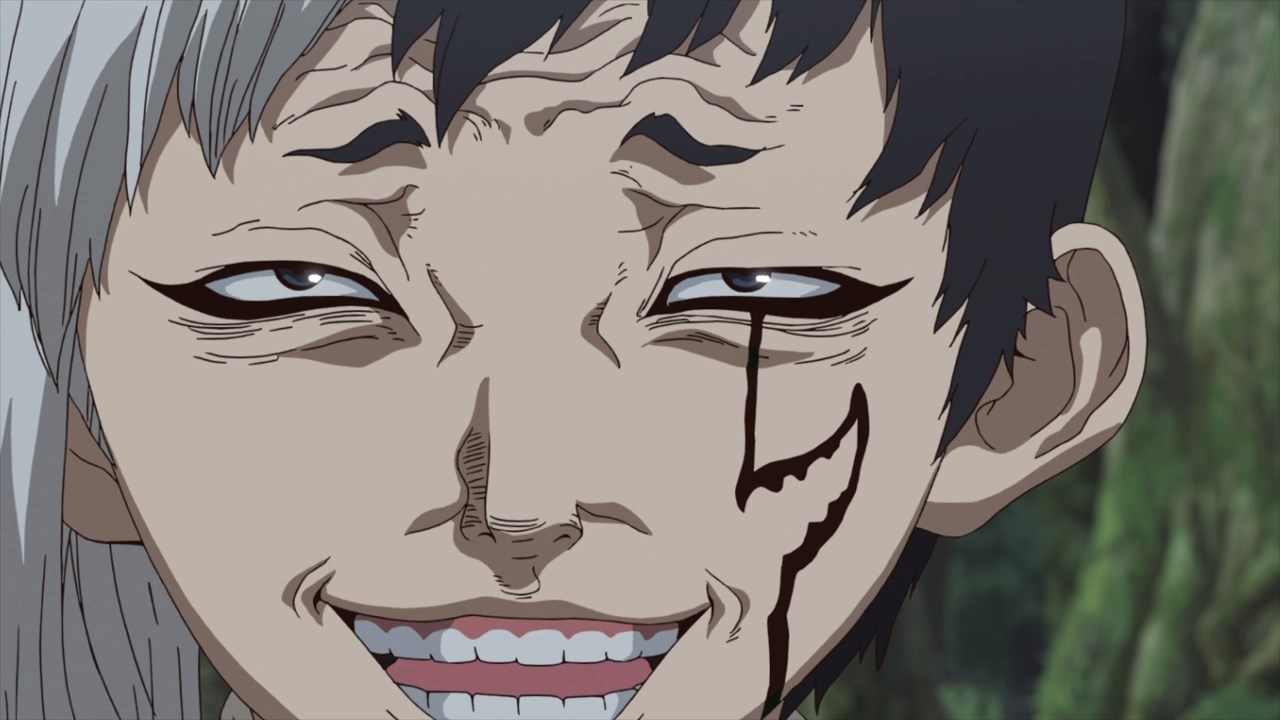 And it seems that Hyoga is right on the money as Gen Asagiri revealed his true colors. But how did he managed to wreck Hyoga’s kudayari? 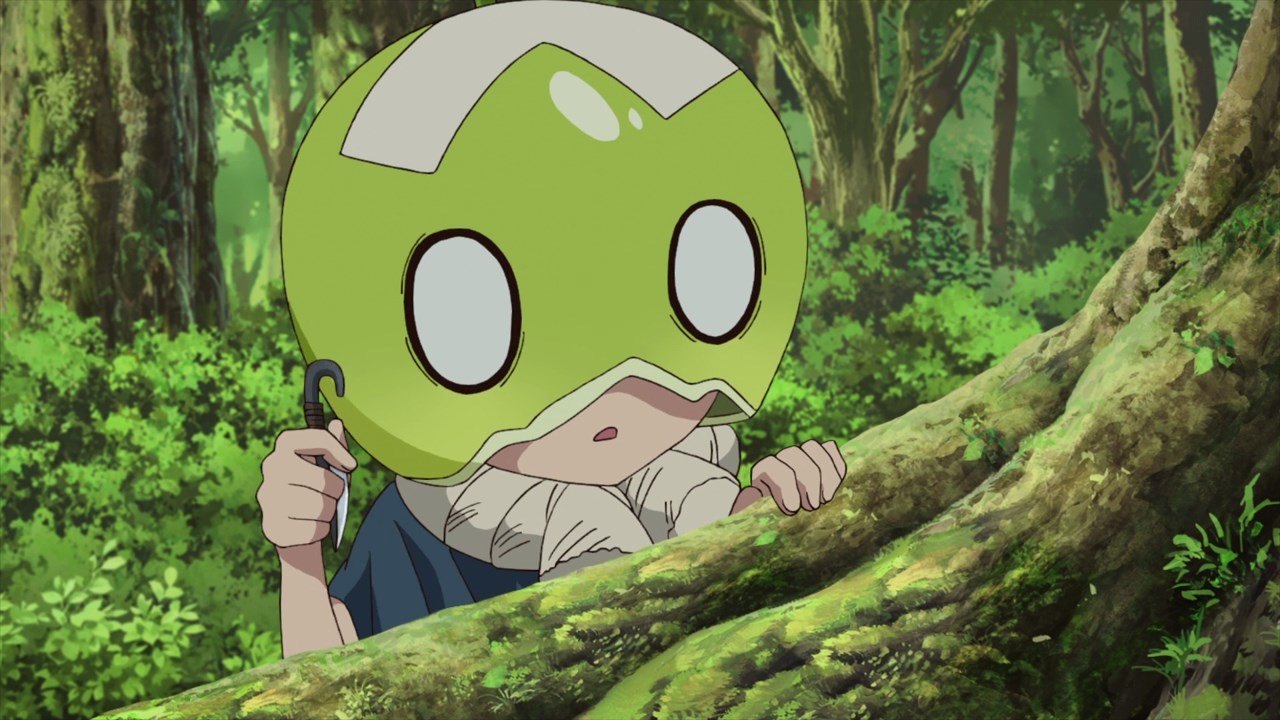 Of course, he can’t get it from Senku directly, so Gen relied on Suika to get his weapon undetected. 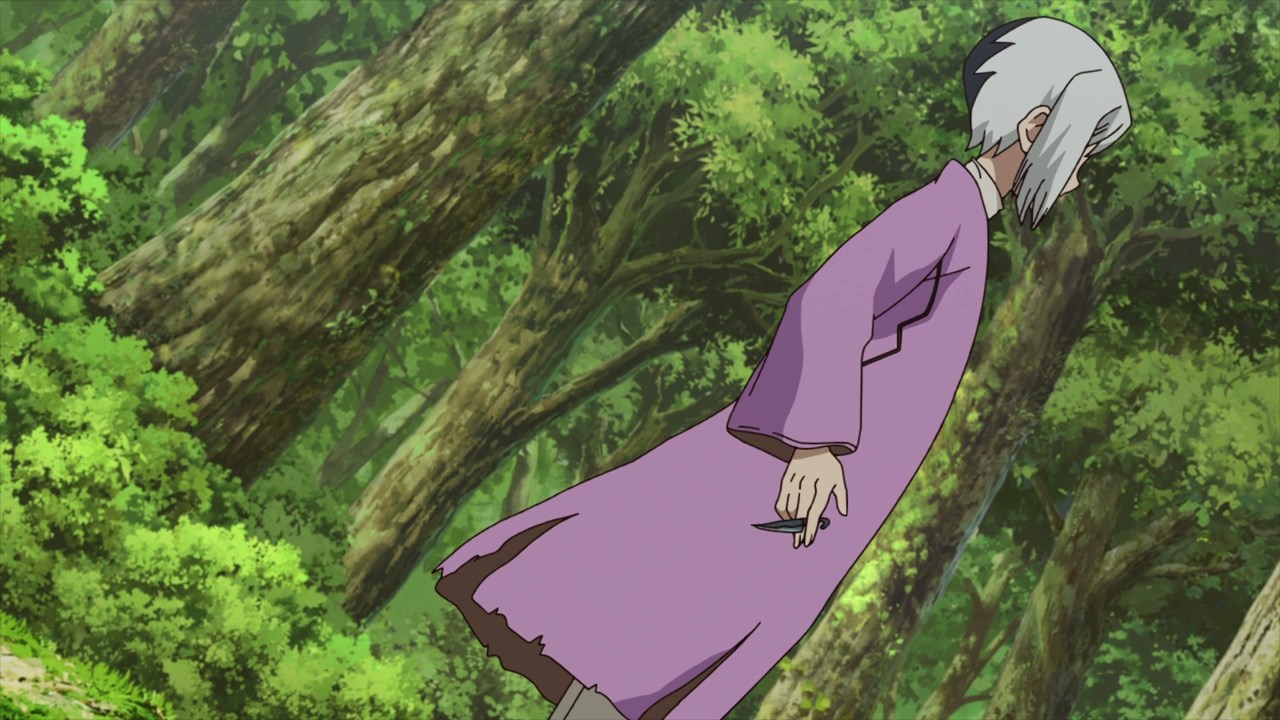 And you know what, it works as none of Hyoga’s goons suspect Gen Asagiri of sabotage.

To begin with, none of them are bright enough and only Hyoga is the one who knows that Gen is playing both sides, until it was too late to notice his betrayal. 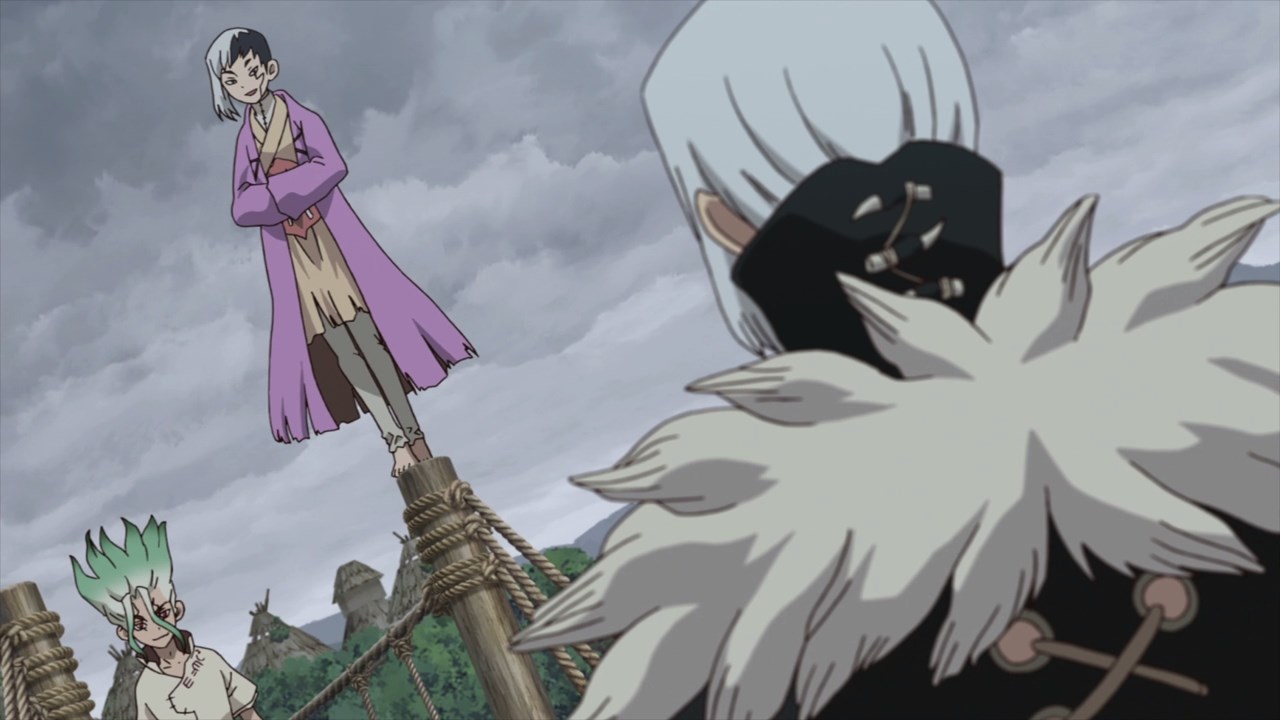 Now that Gen Asagiri revealed himself that he’s working with Senku Ishigami, looks like the tables have really turned for Hyoga. And really, I’m impressed that Senku managed to create stronger melee weapons in a short amount of time, although he still wants to create guns because it’s effective.

Of course, will Tsukasa’s right hand man has a chance of turning it around or he’ll run away and lick his wounds for the time being? At this point, they’re at a freakin’ disadvantage right now because they thought that Senku and the villagers will arm flintlocks which is useless in stormy weather. Speaking of guns, it would be nice if Senku develop cartridges so that guns can be fired regardless of the weather.

Anyways, looks like the war has begun between Senku Ishigami and Tsukasa Shishio, and it’s gonna be pretty ugly in future episodes because it’ll determine humankind’s future in this stone world!