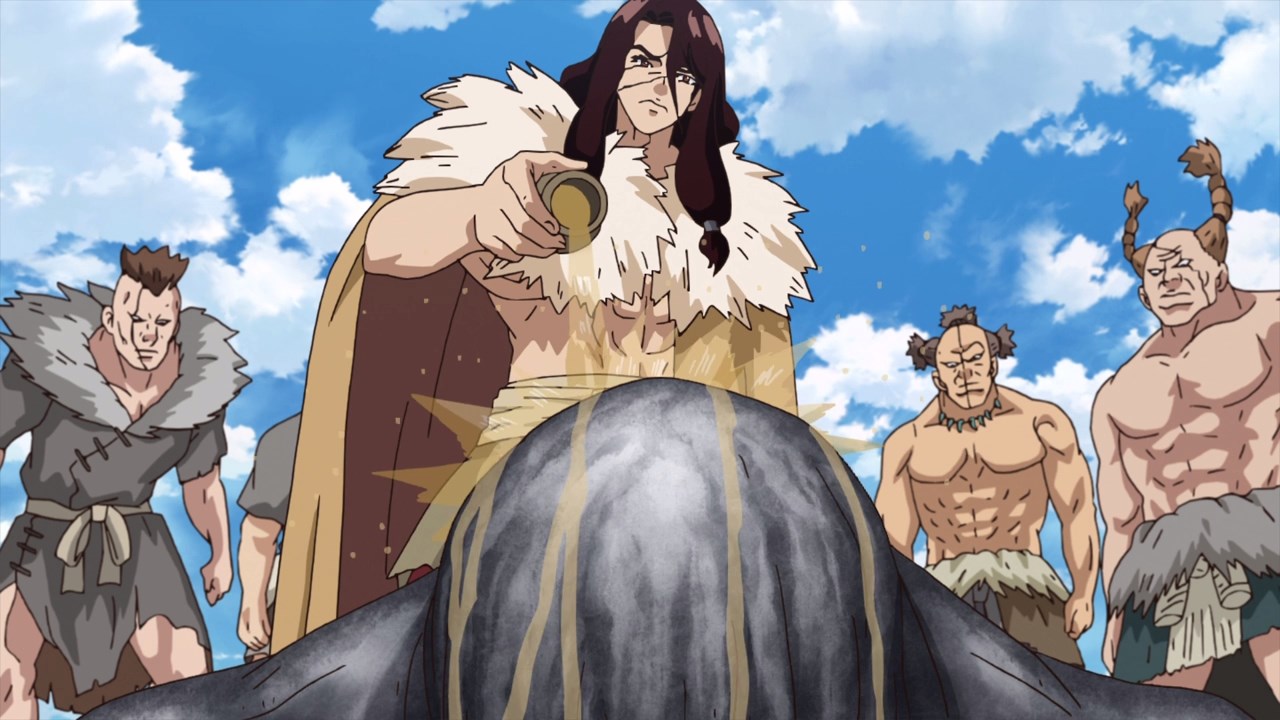 Let’s start this episode with an origin story of how Hyoga got revived by Tsukasa Shishio. Thanks to Senku’s de-petrification fluid formula, Tsukasa can finally revive people who are trustworthy of carrying out his plans for the new world. 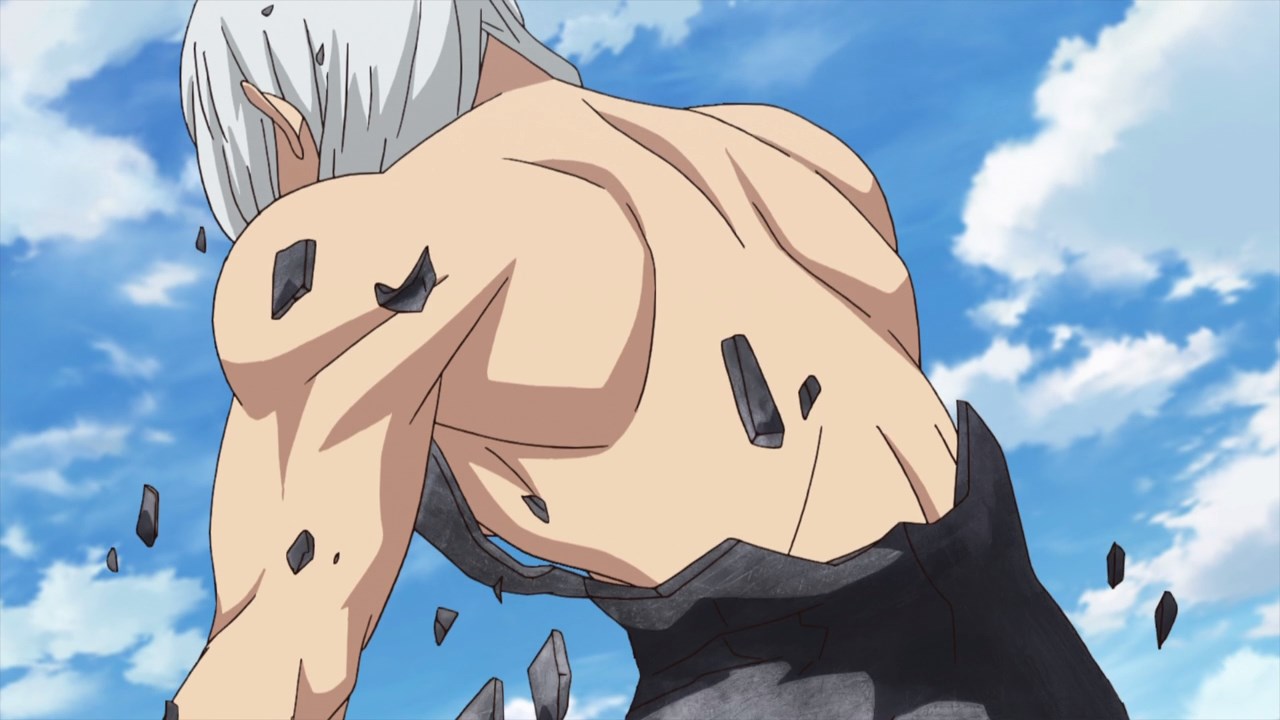 And while some of Tsukasa’s henchmen called him a twig due to his lean build, there’s no denying that Hyoga is one capable warrior who can dish out everyone with his trusty spear. 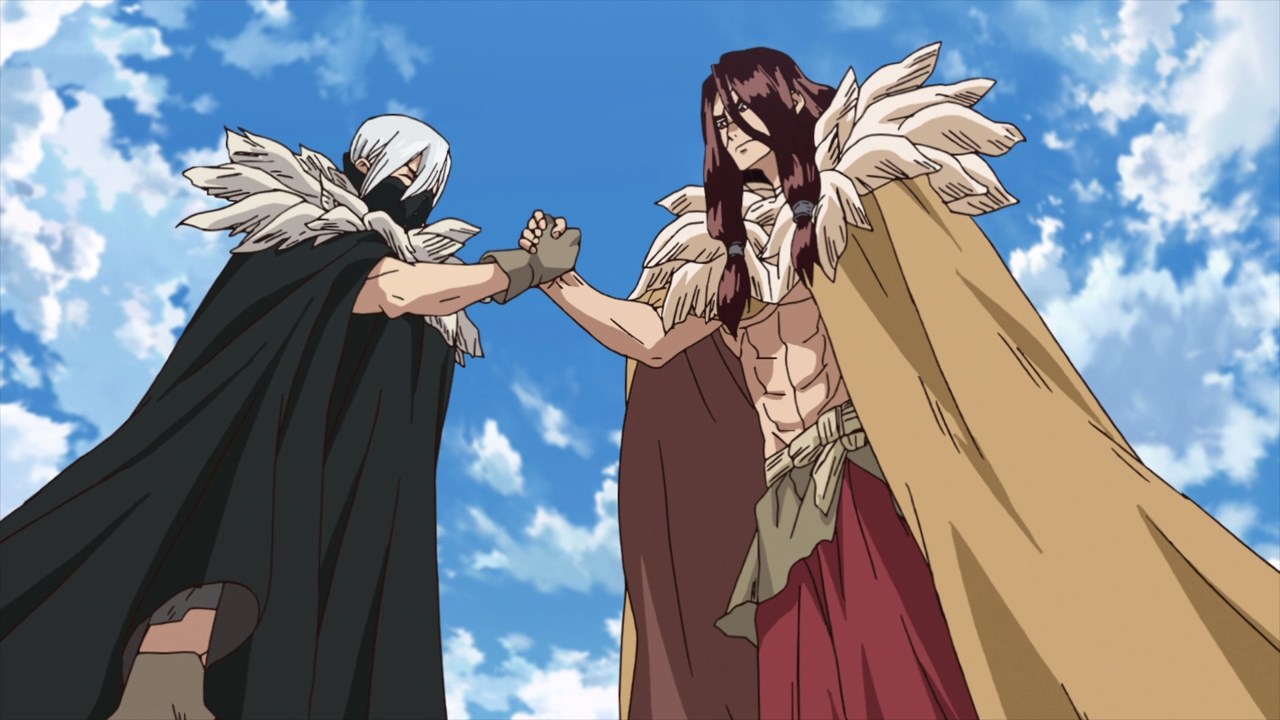 In any case, that’s how Hyoga came to be as he’s the perfect guy who can carry out Tsukasa Shishio’s dream of a new world without being controlled by the old guards, which Tsukasa killed them before they have a chance to get out from their shell. 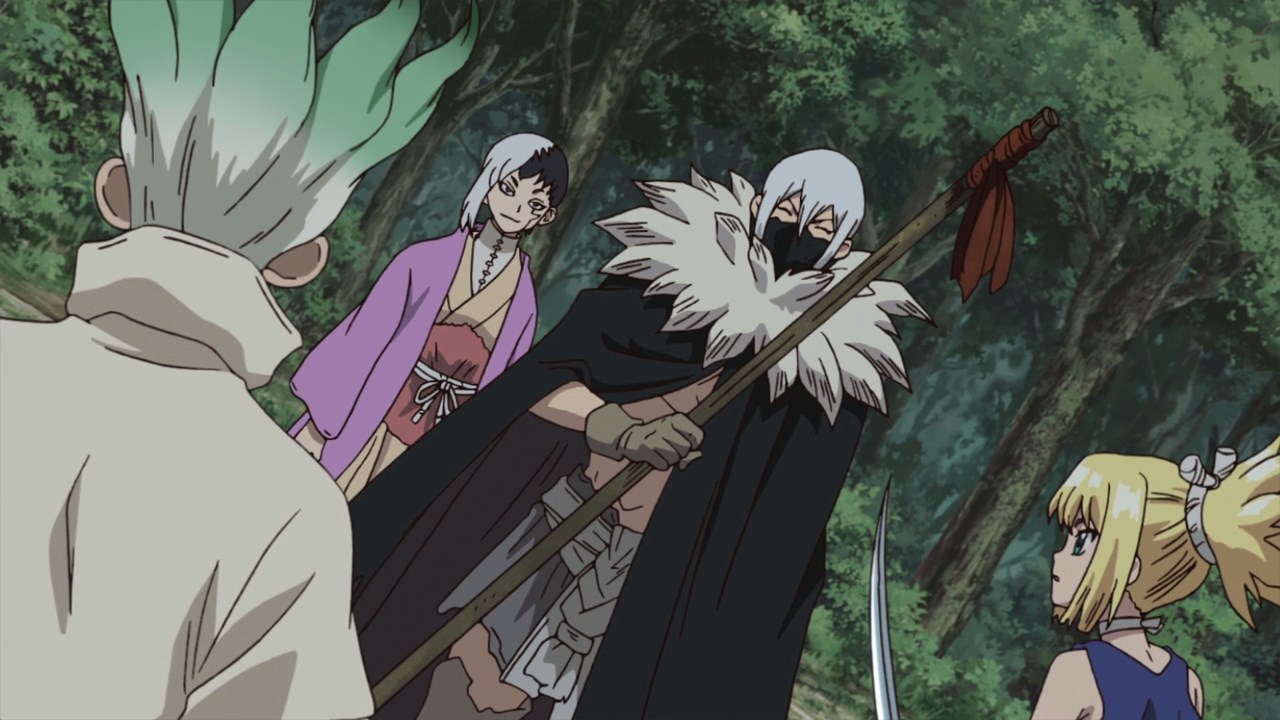 But now, let’s go back to the present as Hyoga is being cornered by Senku and his allies from the Ishigami Village. Without his trusty speak, he’s a sitting duck!

However, Hyoga told everyone that his party were just a distraction… 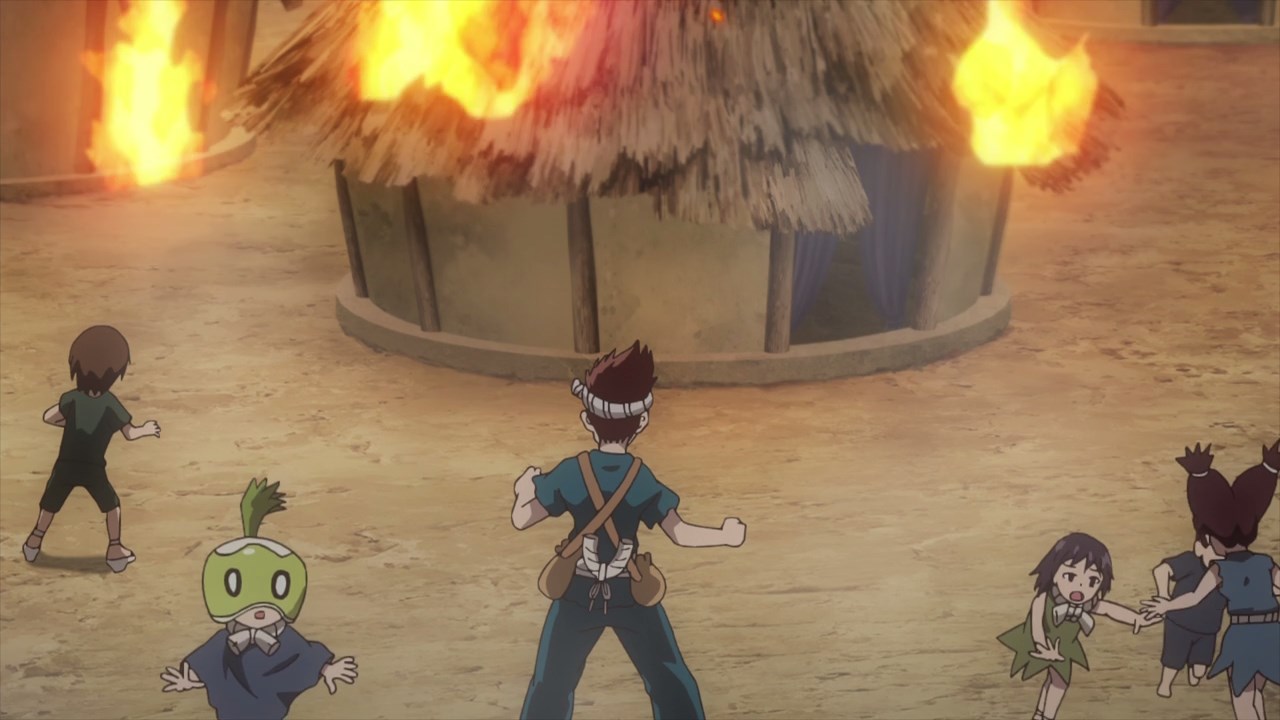 Turns out, someone set the village on fire as Senku was stunned that he and his friends got careless about it. 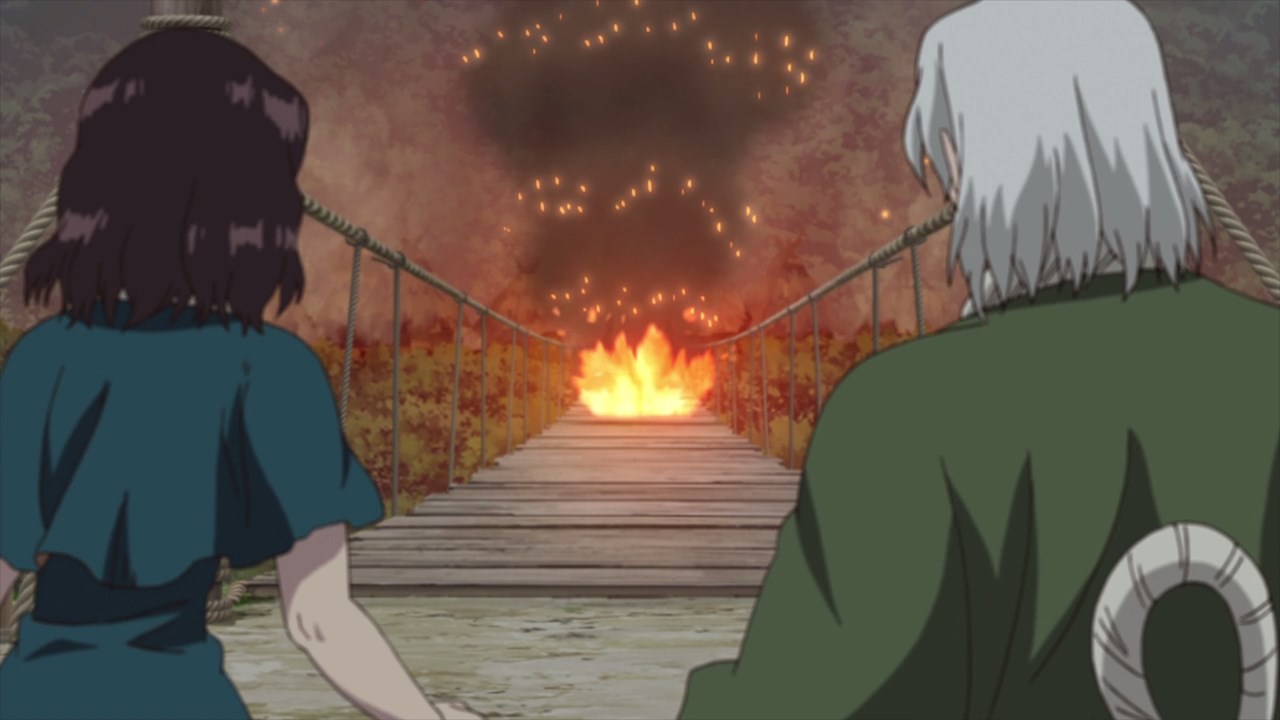 From the wooden huts to the bridge that connects the entire village, it appears that everyone is trapped by this blaze, but who’s responsible of setting it on fire? 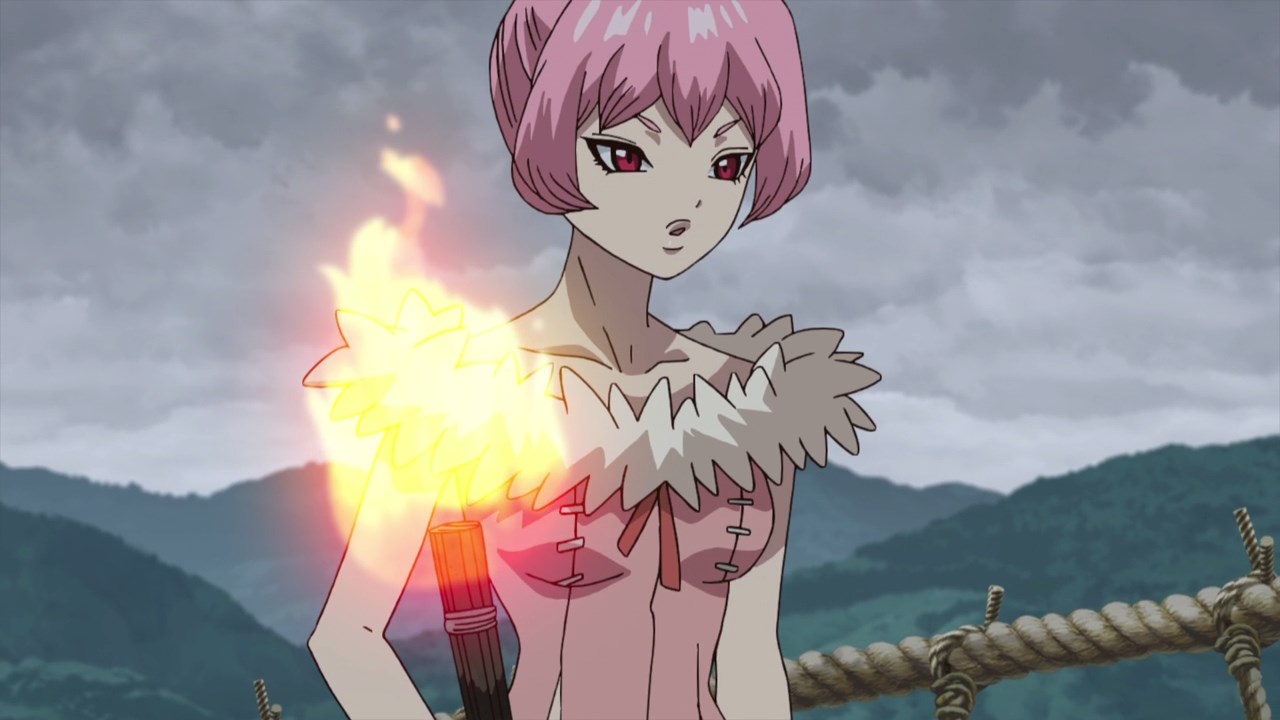 Turns out, it’s none other than Homura where she burn the entire village, all while Senku and his friends are busy stopping Hyoga and his men. 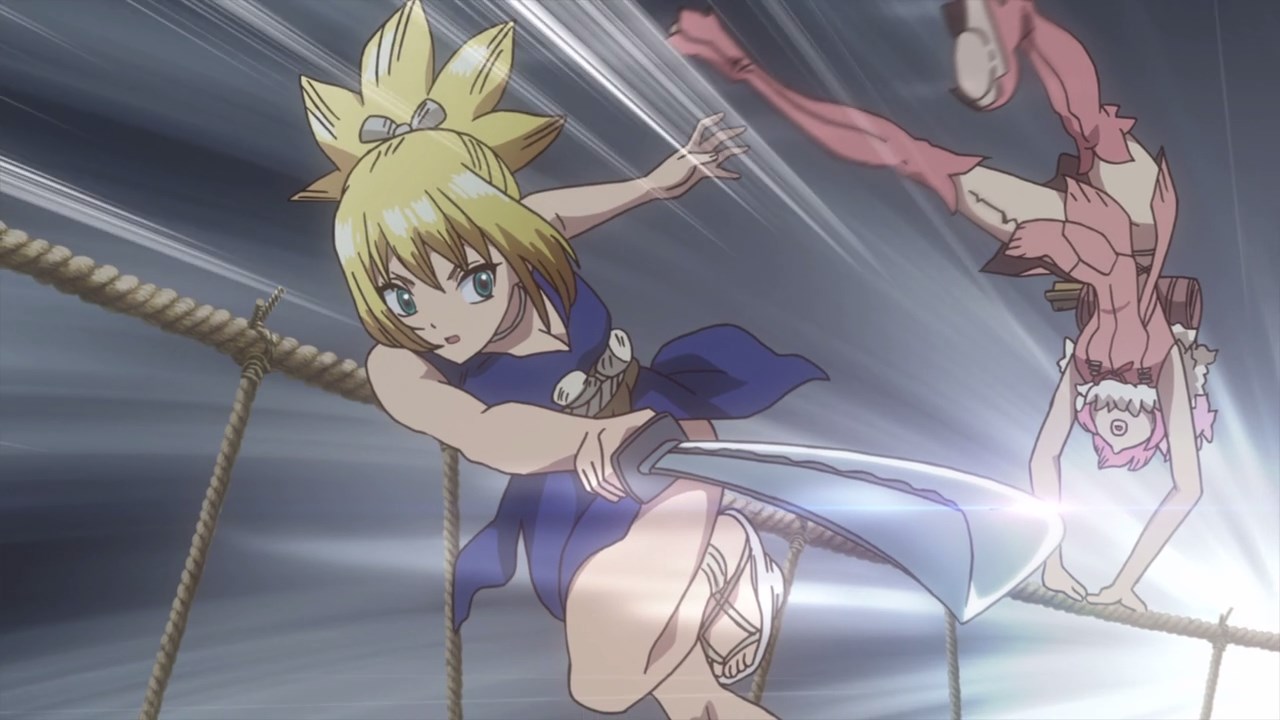 But now that she’s done her duty, it’s time for Homura to fall back and let Hyoga take care of the rest.

Also, Homura is agile that Kohaku couldn’t slash her. At this point, looks like Hyoga had the last laugh as he turned Ishigami Village into a chaotic wasteland! 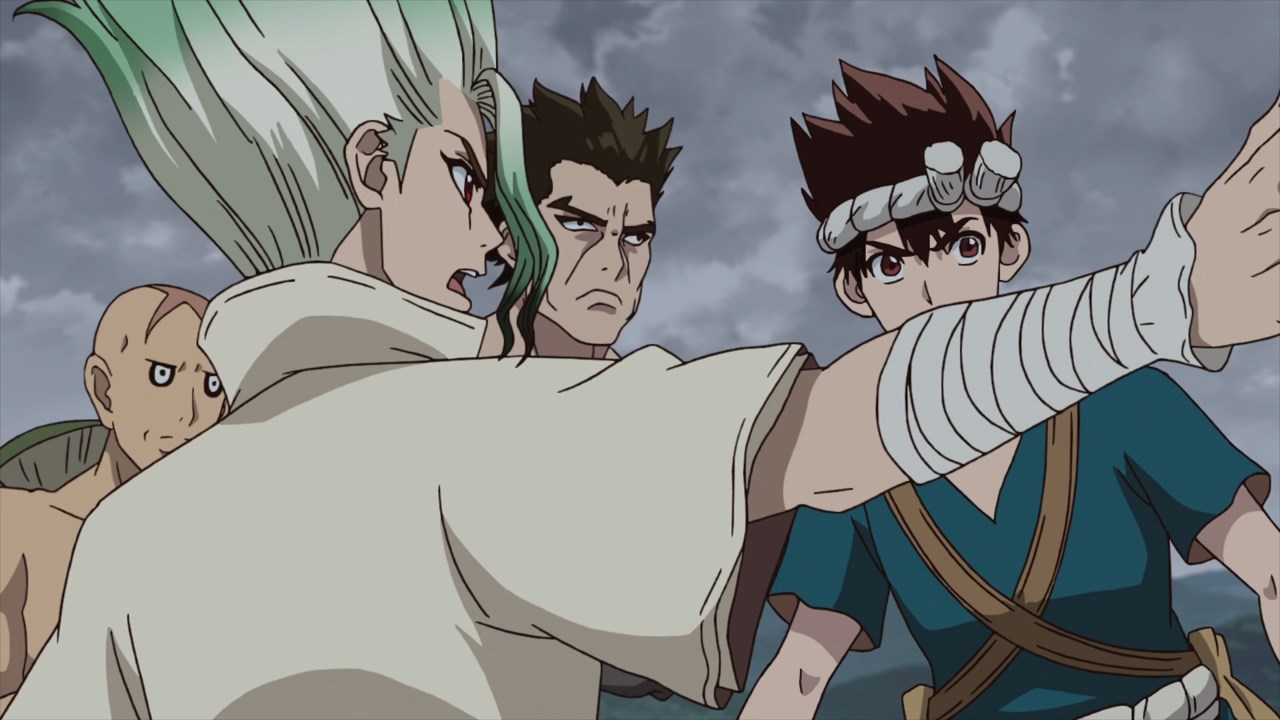 Of course, Senku won’t let anyone die as he and his friends tell the to gather at Chrome’s shed. But even then, Hyoga’s men will try to kill the villagers now that they’re out of the open. 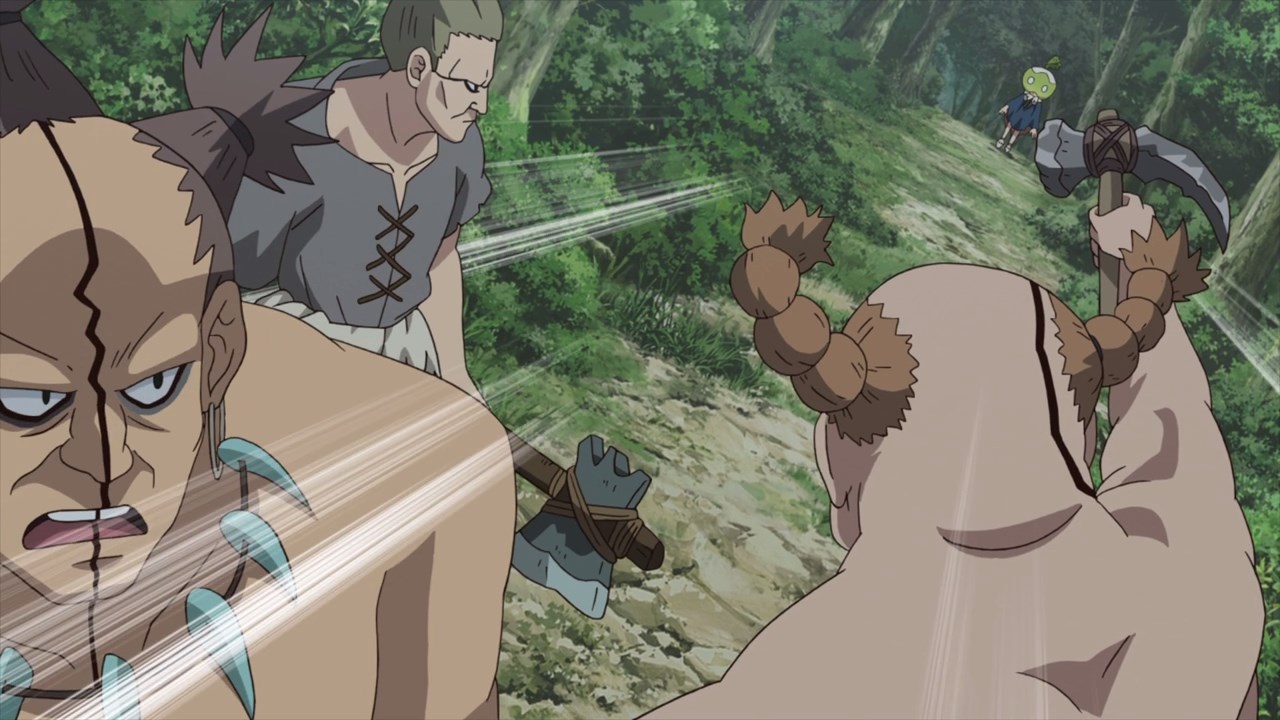 So, one of Senku’s allies will act as bait to Hyoga’s men as Suika approaches them… 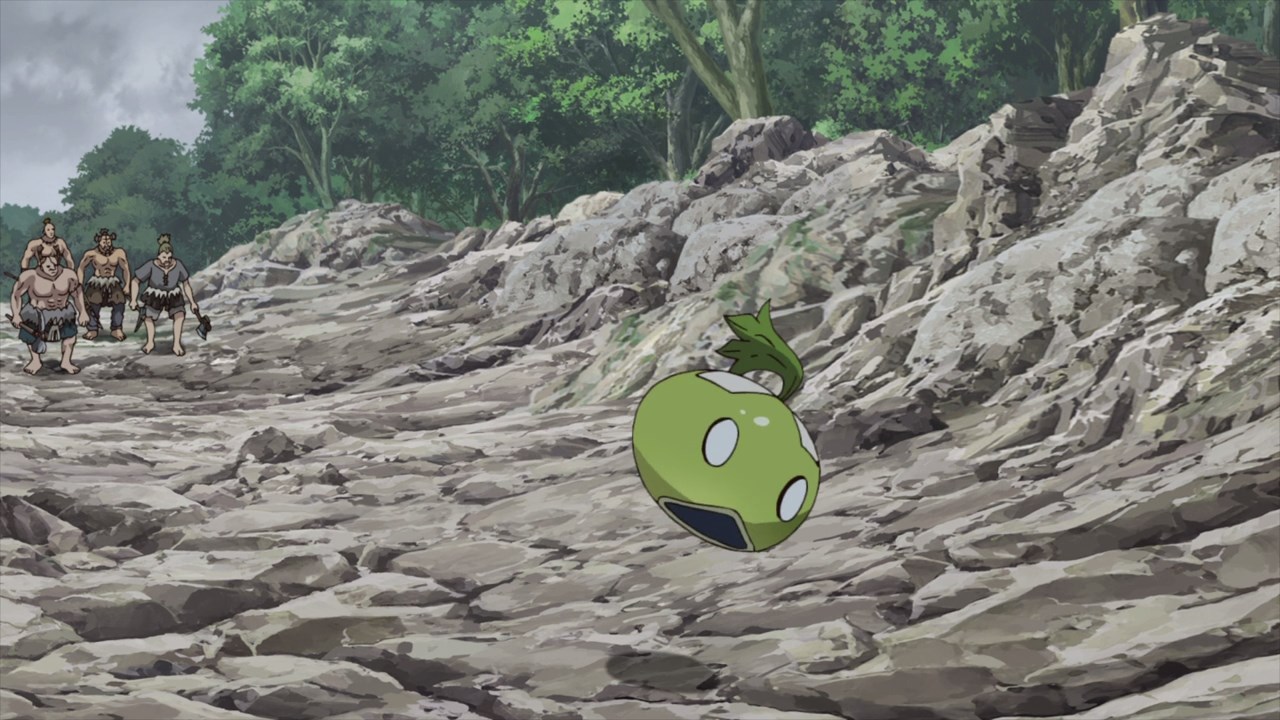 …and run away as fast as possible. While she can roll around the pathway just to give attention to these thick-skulled goons, it appears that Suika will have to deal another hurdle. 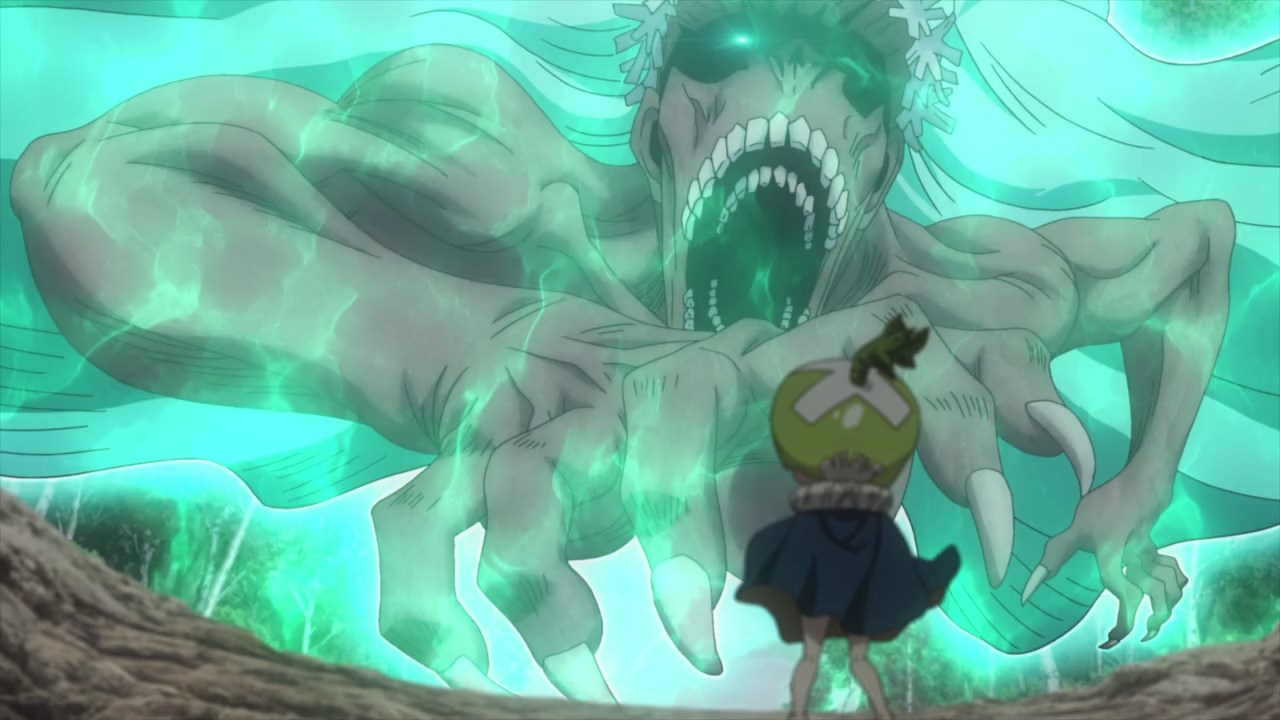 You see, the wind got stronger that it carries the toxic gas from the volcano to this pathway.

Say hello to Lady Death herself as the embodiment of toxic gas (which is made from hydrogen sulfide and sulfur dioxide) is gonna claim Suika’s life! 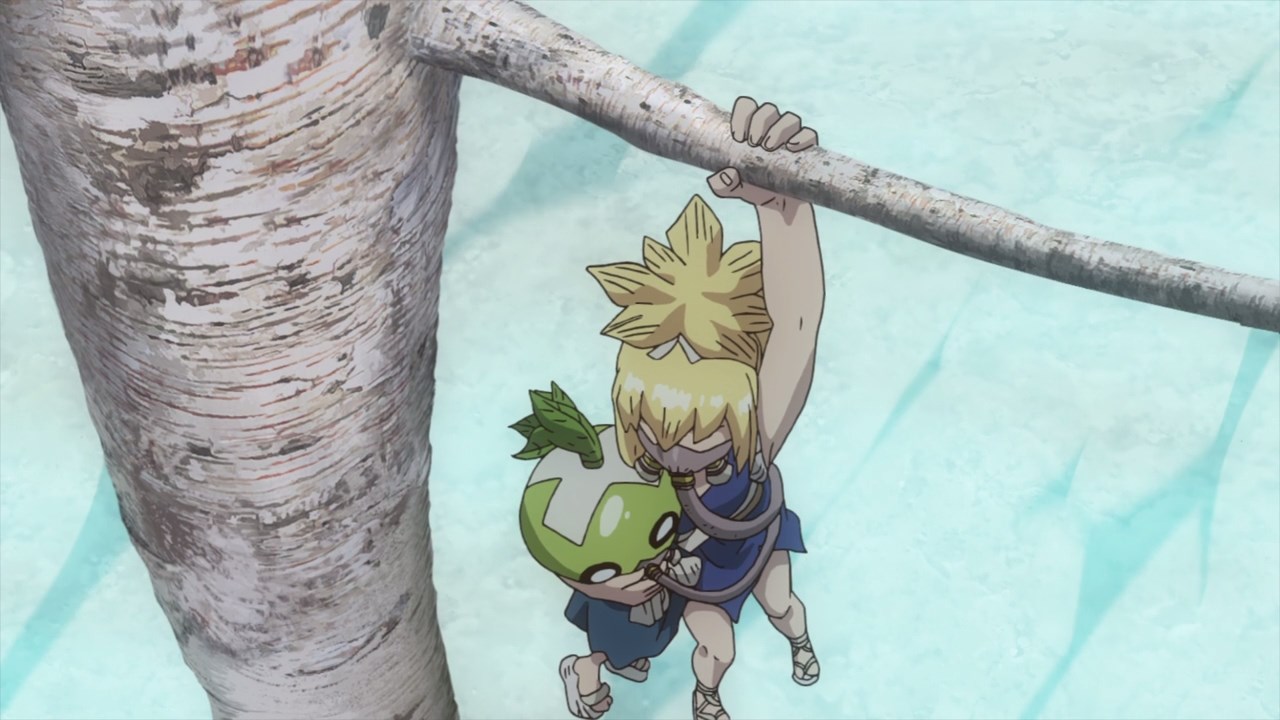 Luckily, Senku and Kohaku rushed towards Suika and gave her a gas mask. Oh yeah, and Kohaku carried Suika towards the treetop just to make sure Suika won’t inhale it. But wait a minute, where’s Senku? 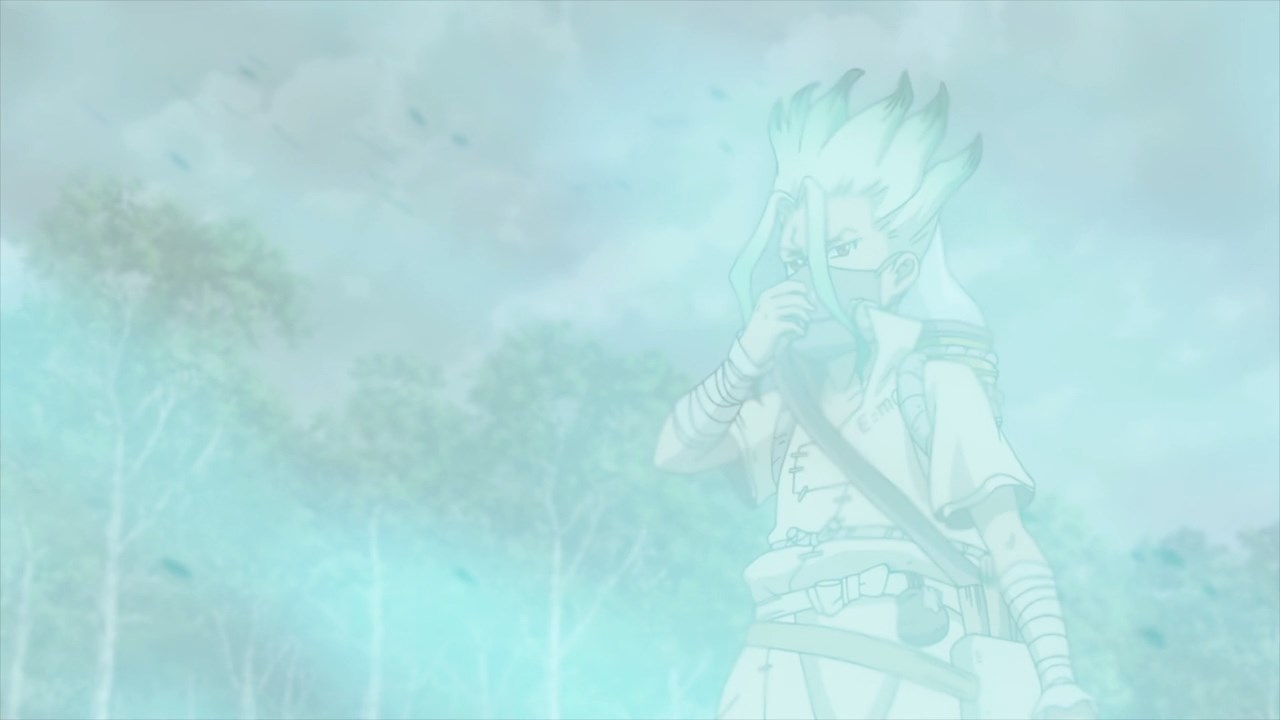 Oh, he’s wearing his gas mask already but Senku needs to get out of here along with Kohaku and Suika. C’mon, there’s a possibility that there will be another wave of toxic gas. 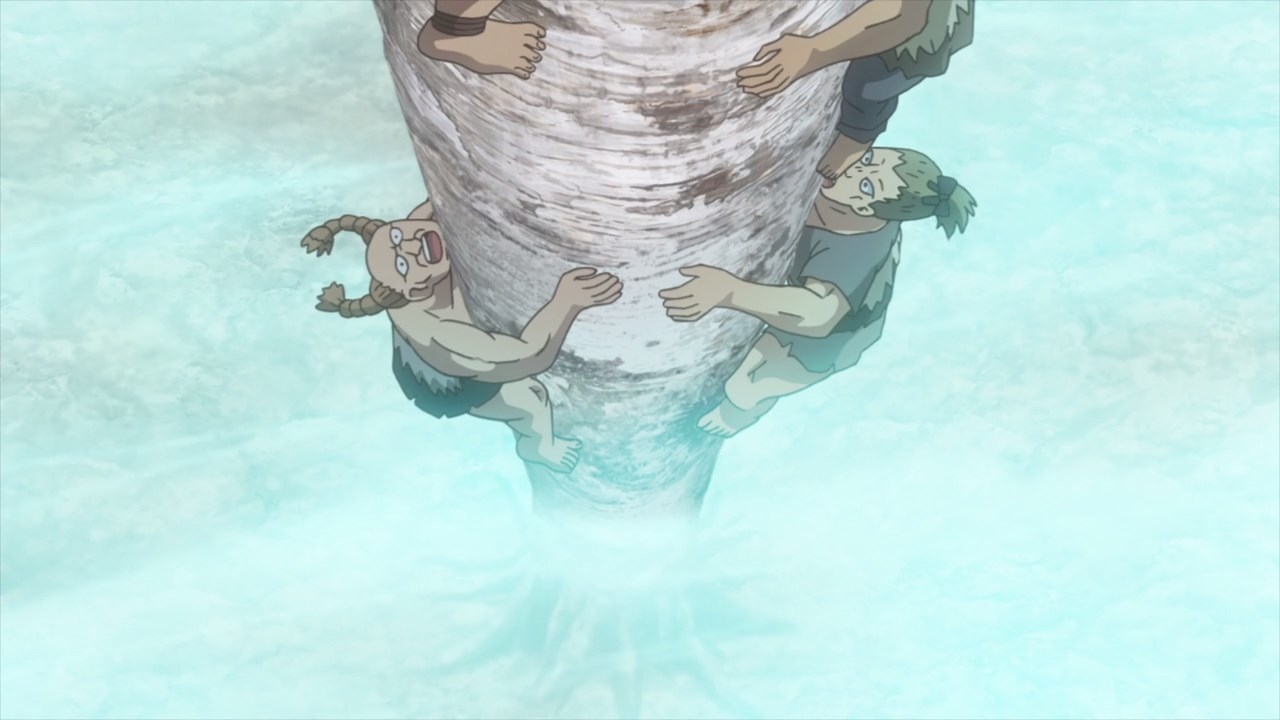 Meanwhile, Hyoga’s goons are scrambling to climb up to the trees since they don’t have gas masks to cover their nose and mouth. 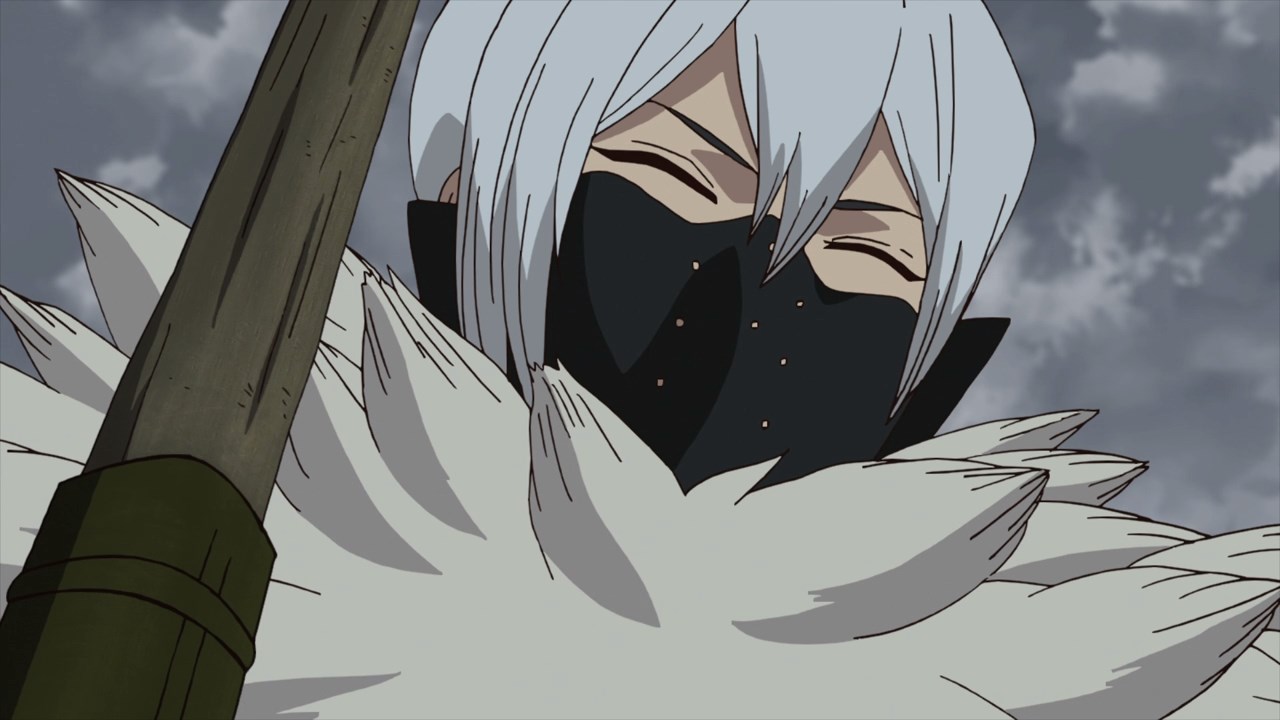 Oh yeah, here’s Hyoga and while he’s already on the treetop together with Homura, it seems that letting his goons live would be a hassle in the long run since Hyoga doens’t like being surrounded by idiots. 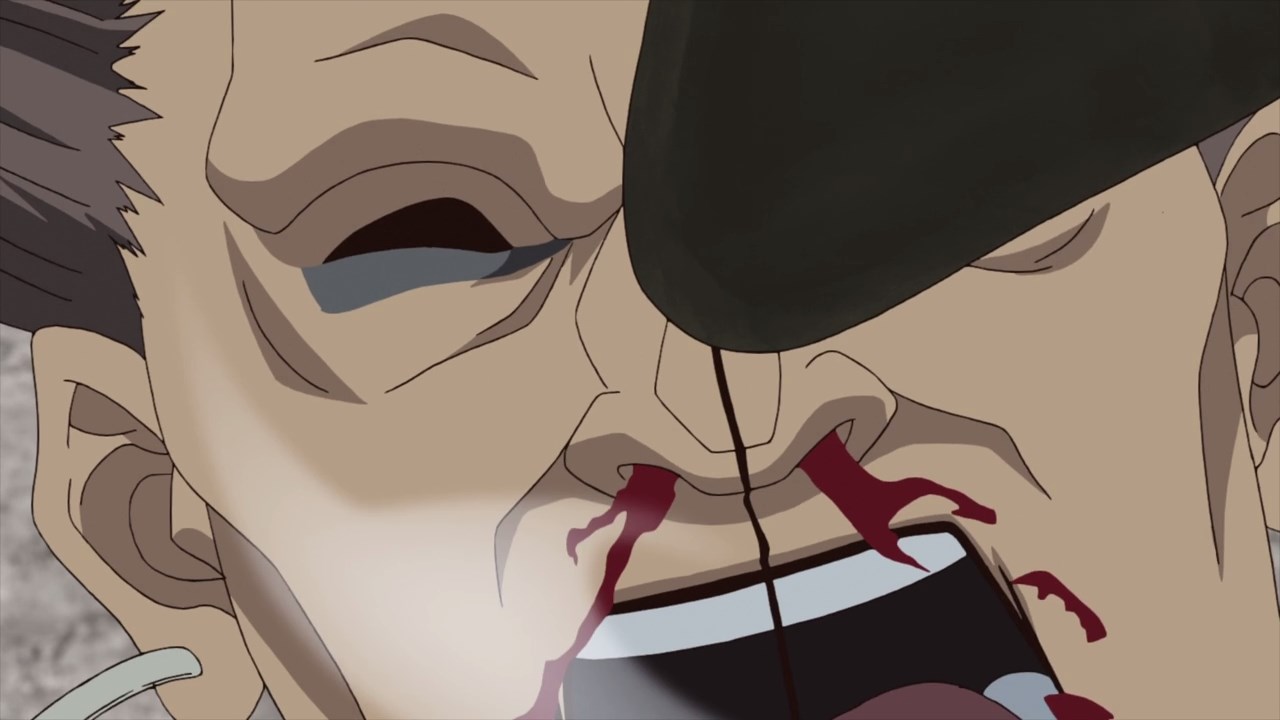 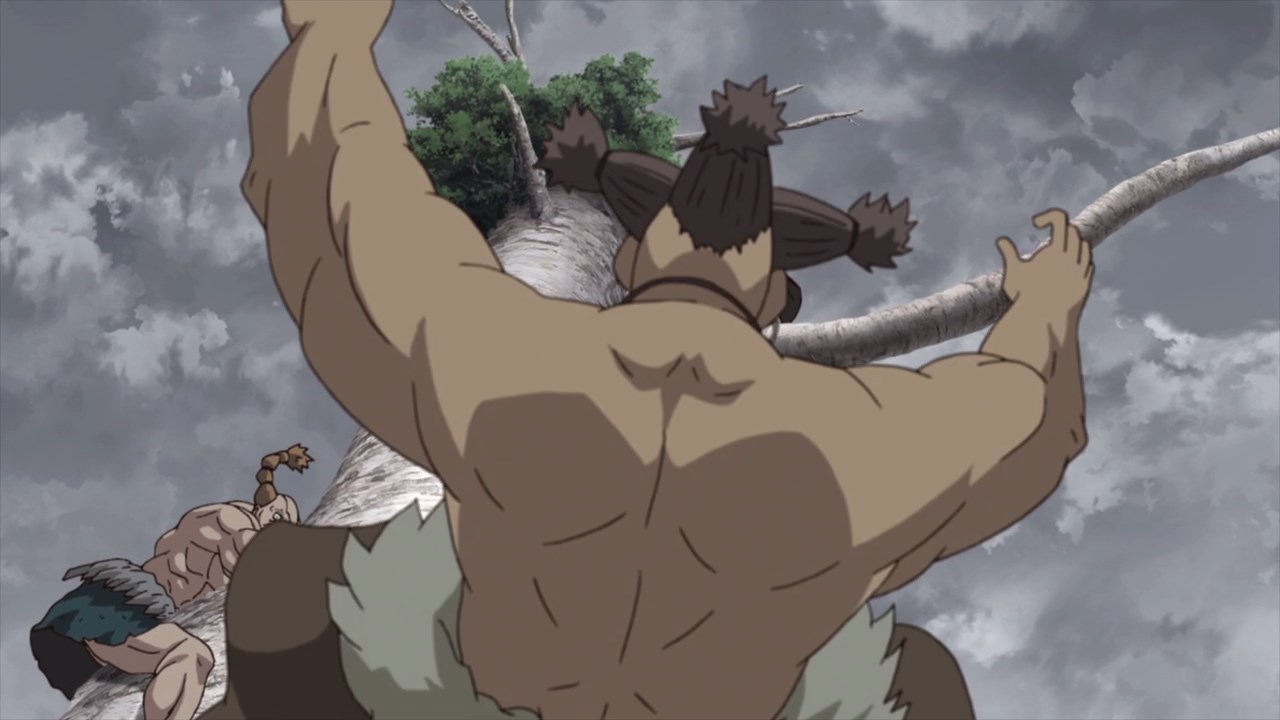 So, Hyoga decides to take his allies down one-by-one until they fell towards the ground full of toxic gas. 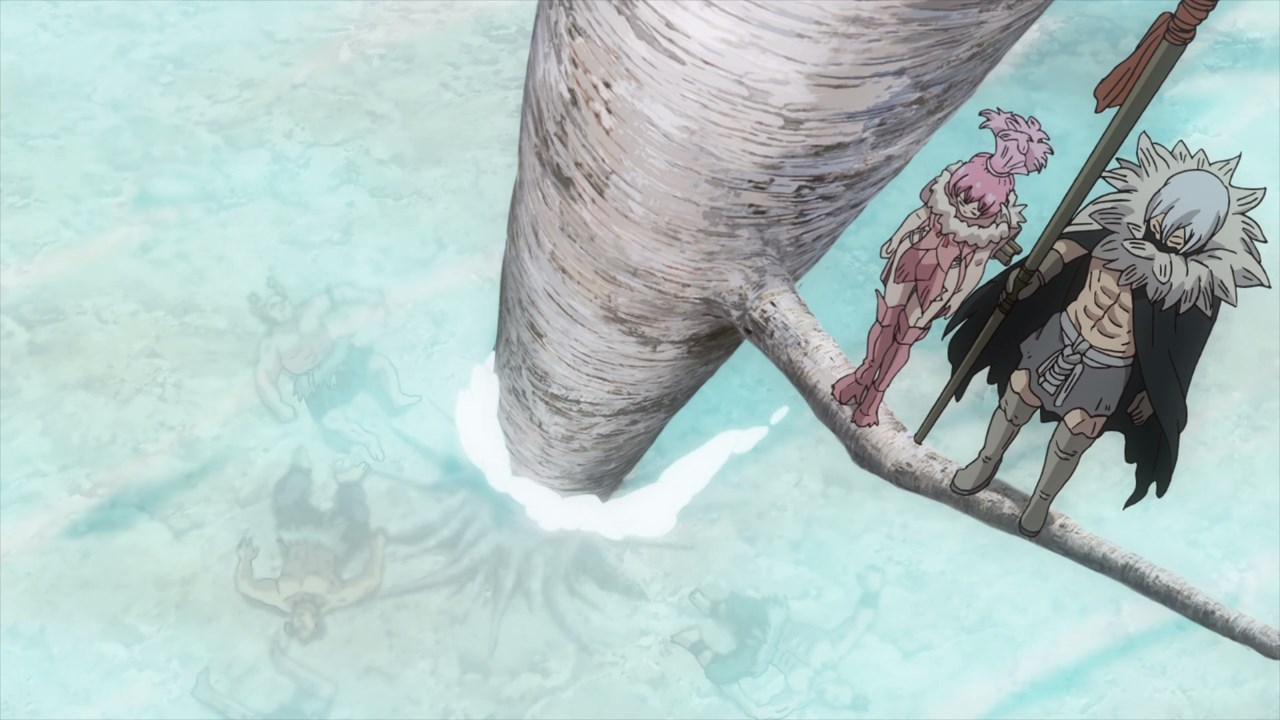 And if Tsukasa asked Hyoga on what happened to his men, he’ll just tell the leader that they met into an unfortunate accident.

But really, Hyoga is one cruel man that you shouldn’t mess with! For now, he and Homura will have to fall back and report to Tsukasa Shishio on their small skirmish at Ishigami Village. 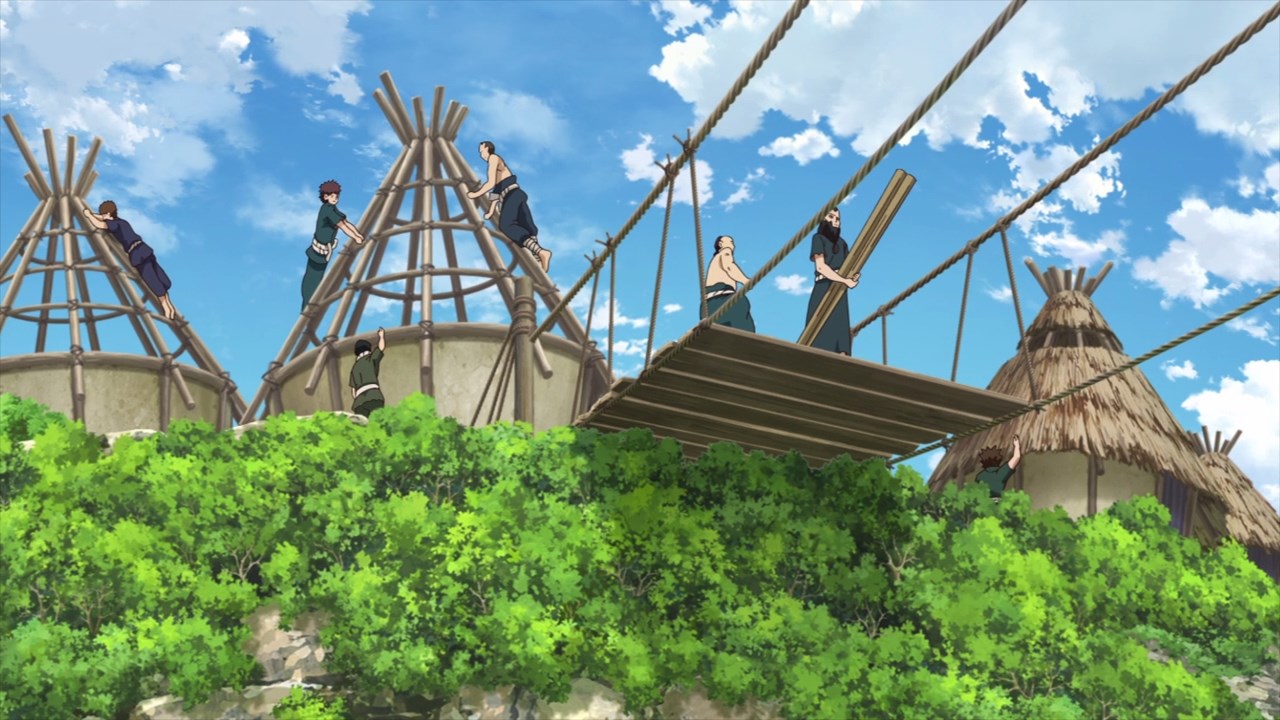 After Hyoga and Homura retreat, life has returned to normal as the inhabitants rebuild their village. Of course, they can’t just let anyone attack Ishigami Village all the time. 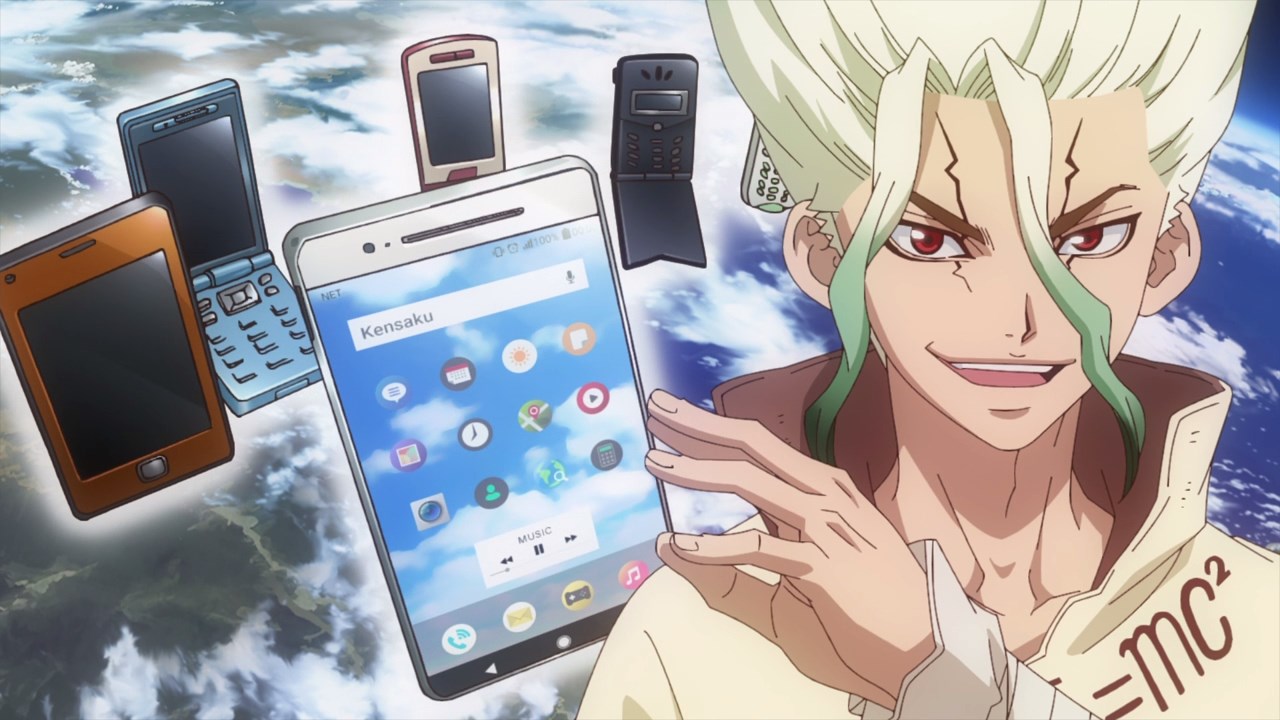 So, Senku Ishigami came up an idea of bringing cellphones into the stone world where communication is key to winning a war.

Of course, he can’t create smartphones since he doesn’t have the necessary materials to make one, so Senku will just create walkie-talkies for now. 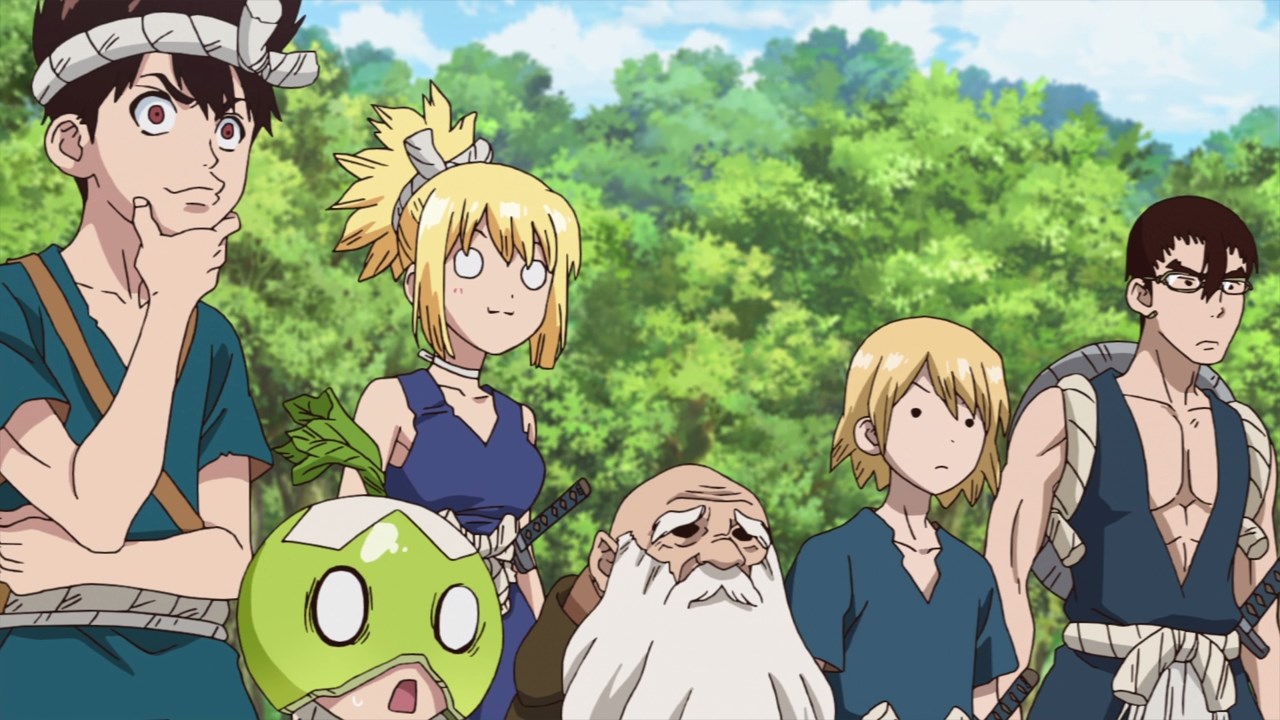 For the inhabitants of Ishigami Village, they’re scratching their heads on what a cellphone is since they didn’t seen one. 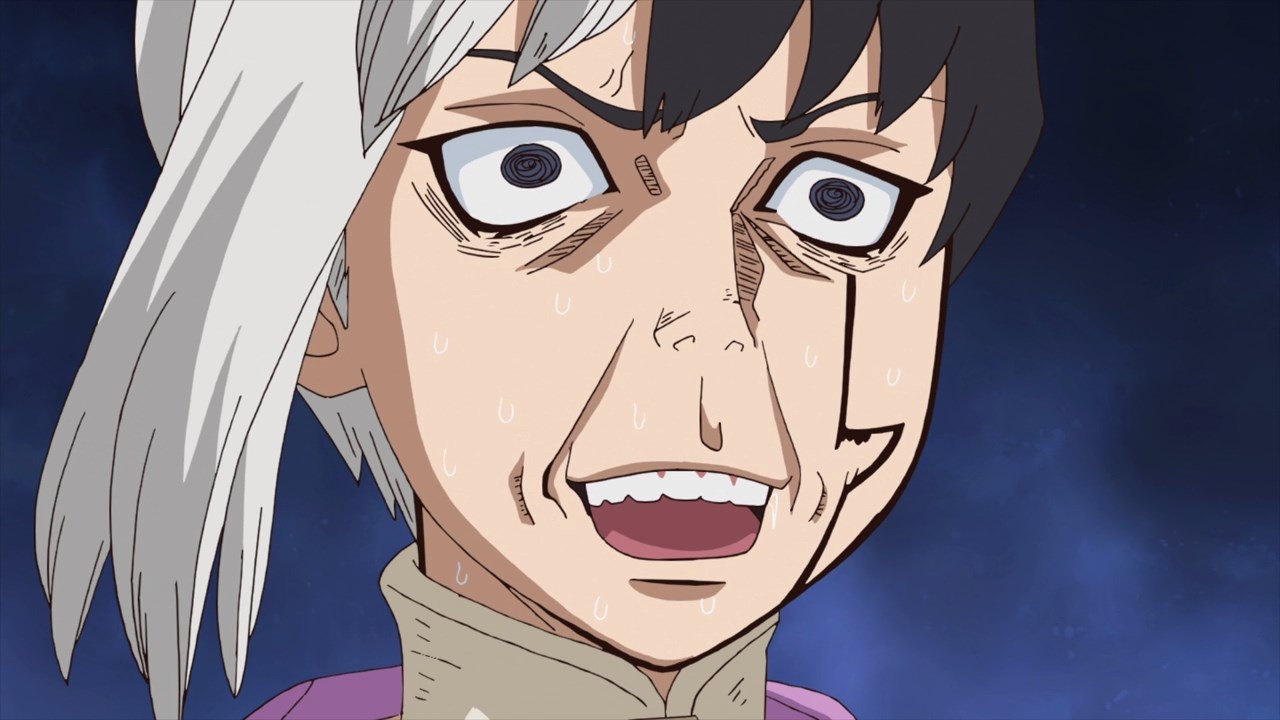 But for the likes of Gen Asagiri, he’s baffled that having cellphones to the stone world is downright madness, but that doesn’t stop Senku from doing the impossible since he wants to bring modern civilization in just a few year or even a few months! 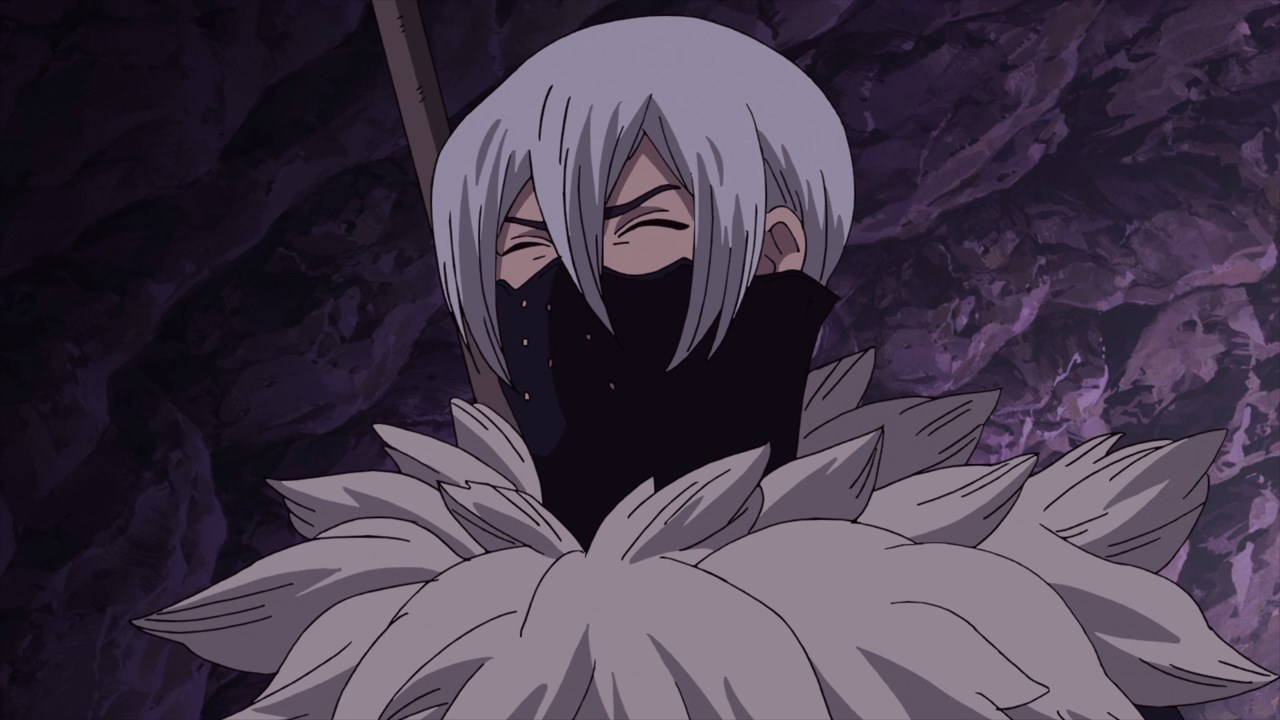 Lastly, here’s Hyoga as he told Tsukasa Shishio about Gen Asagiri’s betrayal as well as the harsh truth that Senku is alive. 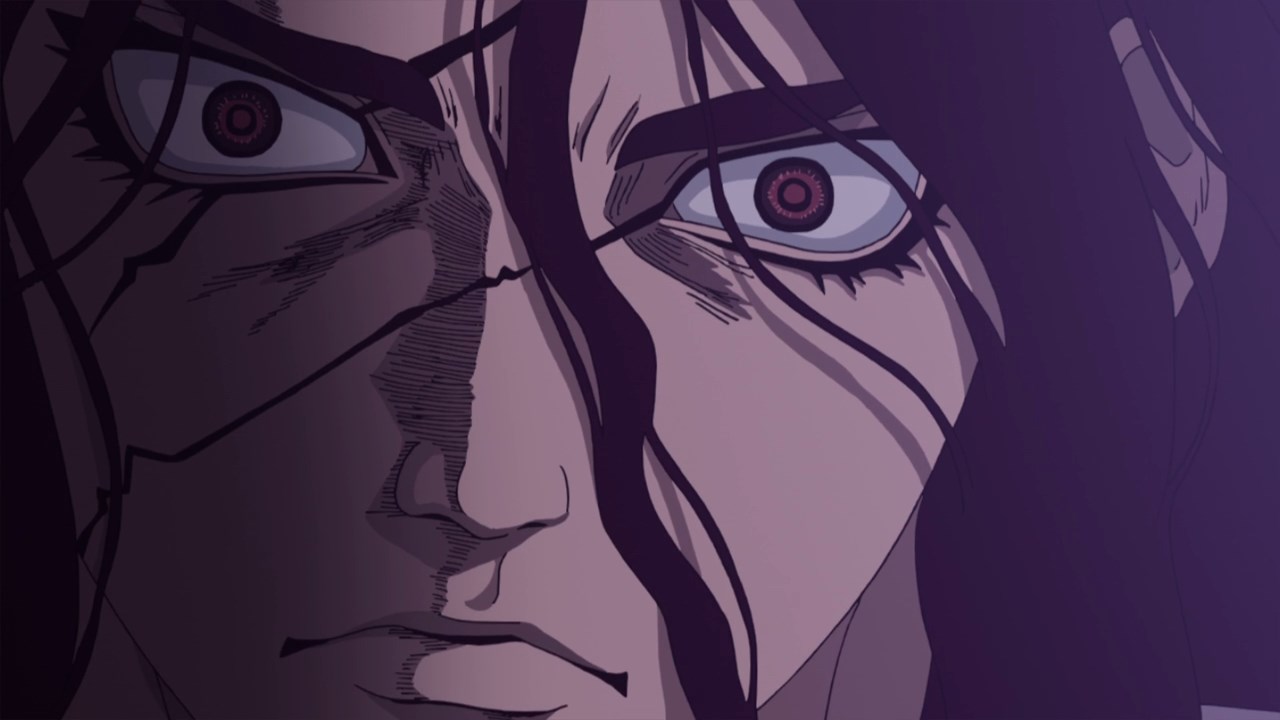 And when he learned that Senku is not dead, Tsukasa is shocked that he’s thinking of “Ah shit, I’m gonna kill him again!” and the like. Well, looks like he and his Empire of Might will have to crush Senku and the Kingdom of Science as soon as possible.

Anyways, I’ll see you next time where Senku attempts to bring modern communication into the stone age.