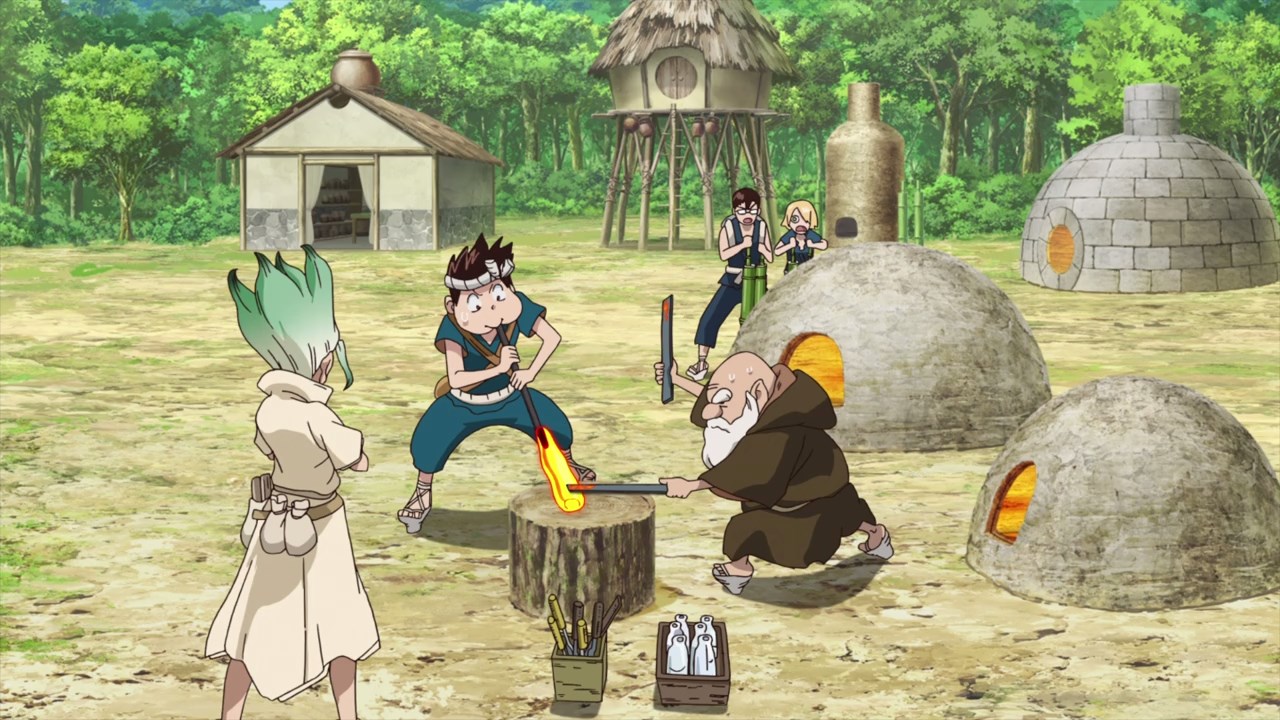 Alright everyone, looks like Senku and his fellow friends from Ishigami Village are in full swing, as they’re building various things now that they have renewable energy via the waterwheel. 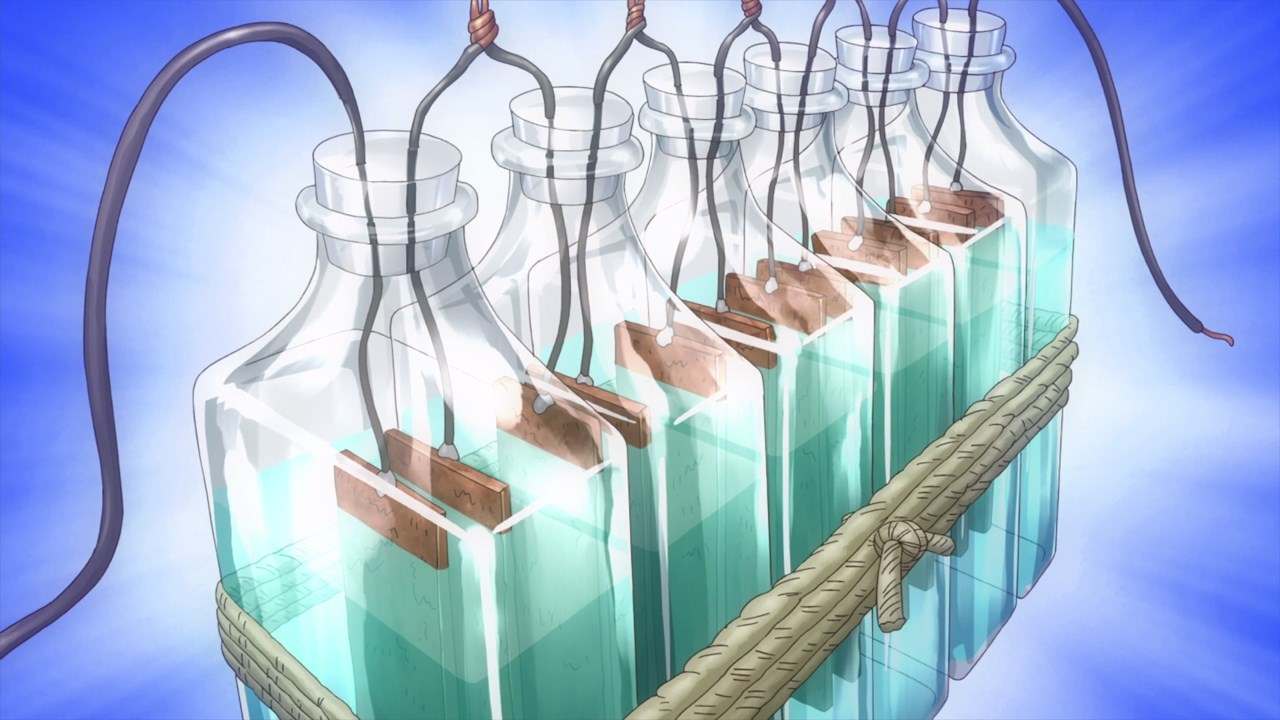 One such example is the battery where Senku, Chrome, and Kaseki made it using glass bottles, copper, and sulfuric acid. 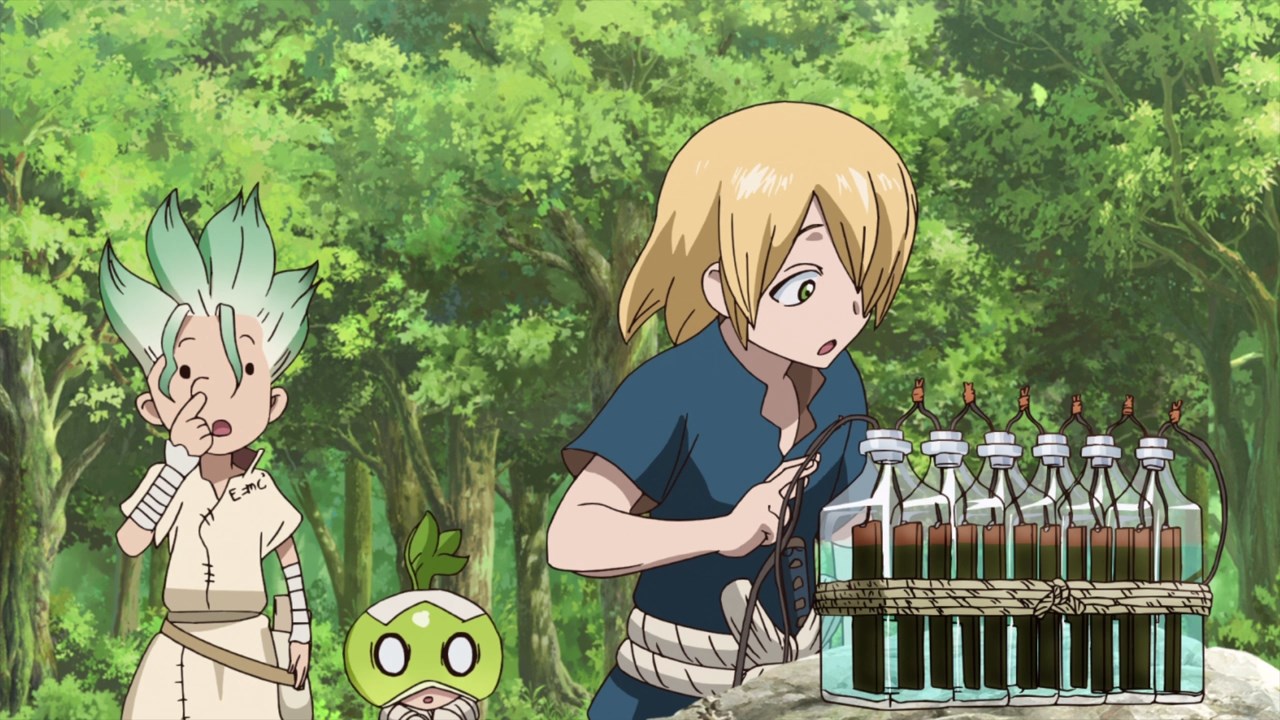 And while this battery can store electricity that’s being produced by the waterwheel, it’s still dangerous when handled improperly.

Sure that it contains sulfuric acid as it’ll melt human flesh, but let’s not forget that electricity is also dangerous and it’ll potentially kill anyone when being electrocuted. 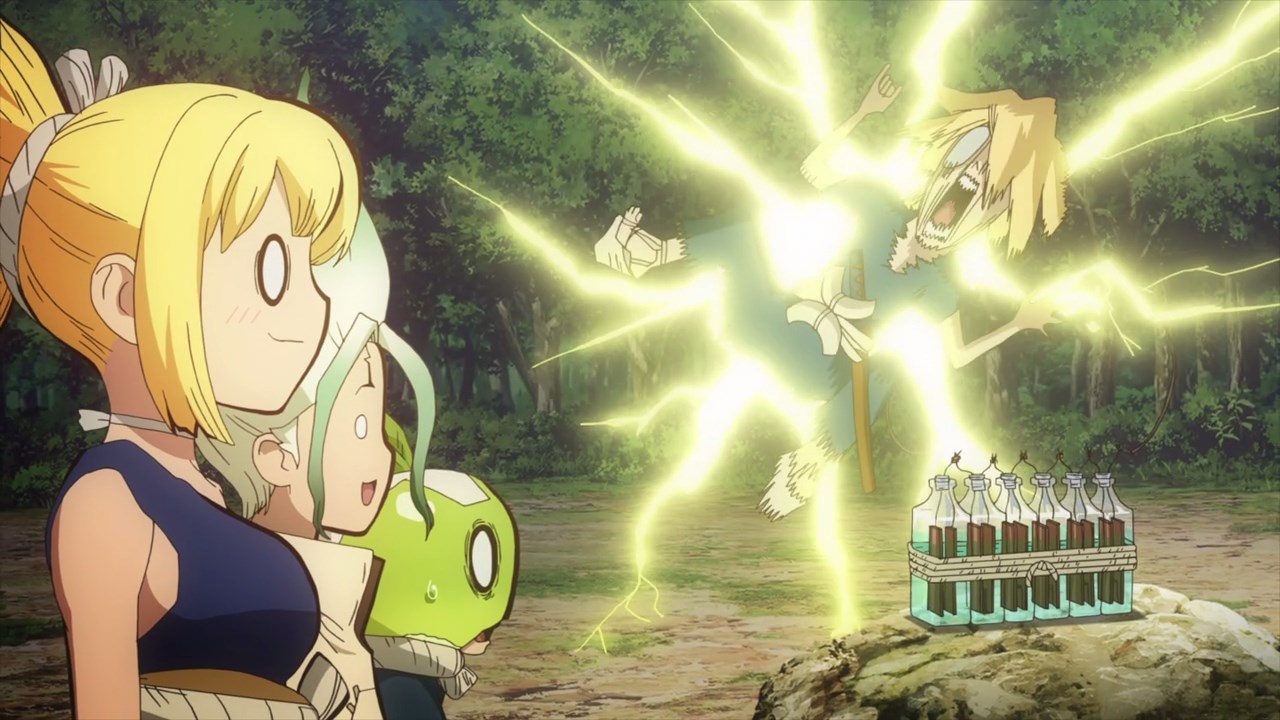 And as you can see, Ginro learned the hard way as he touch the battery which Ginro got a jolt to his spine. Good thing that he’s alive though but if it’s high voltage, Ginro might not survive. 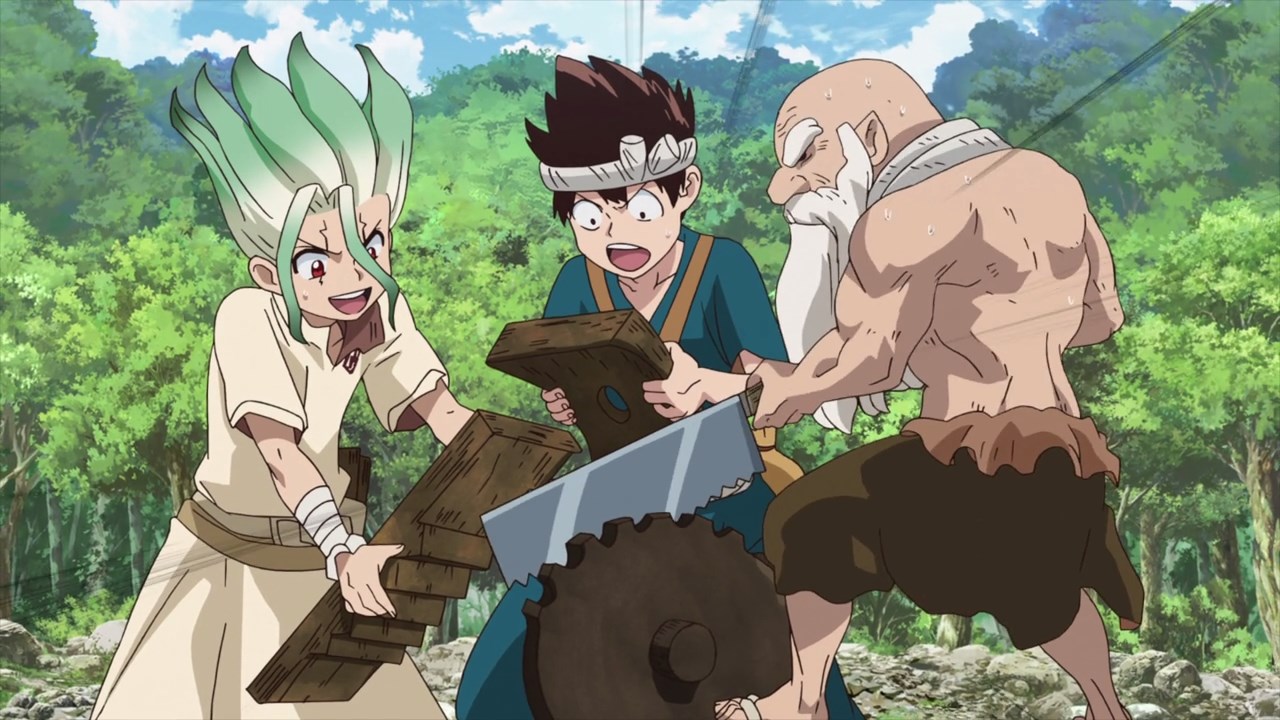 Now that they’re done making batteries to store energy, Senku and his buddies move onto their next project as they want to create another machine that uses the waterwheel, such as converting rotary motion into linear motion. 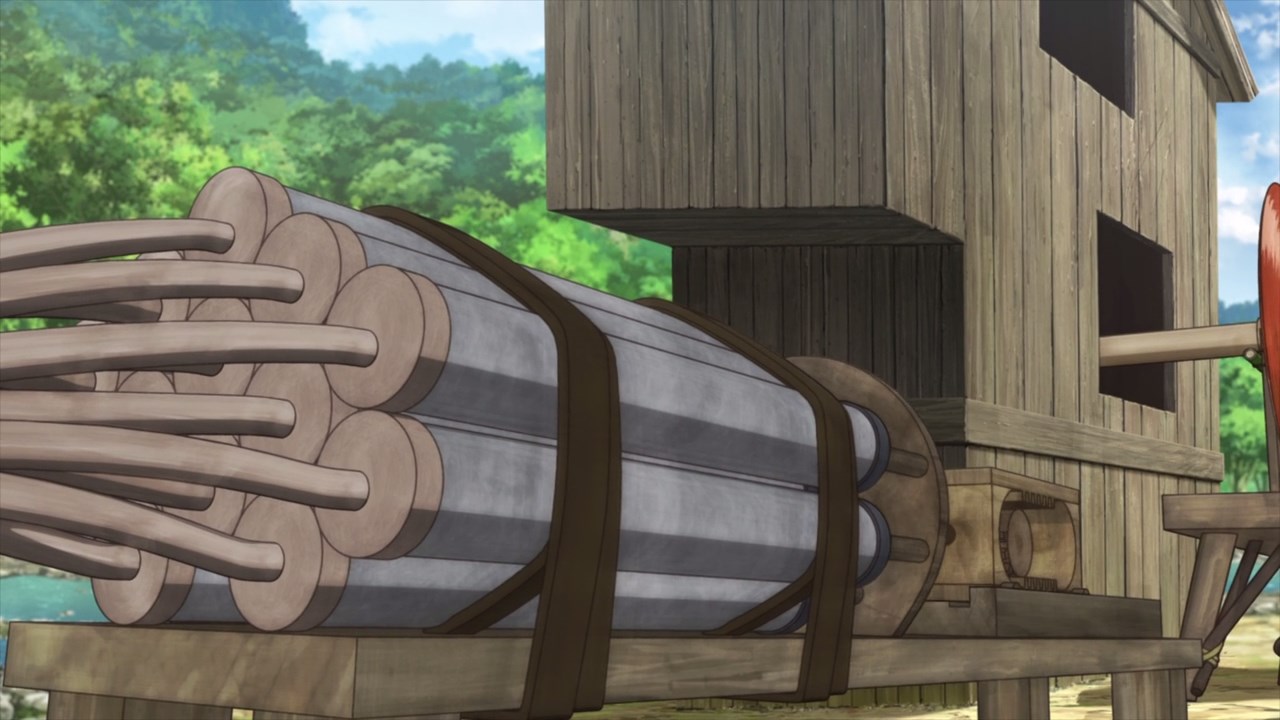 The result, they have created a pump which uses the waterwheel’s power to blow air. 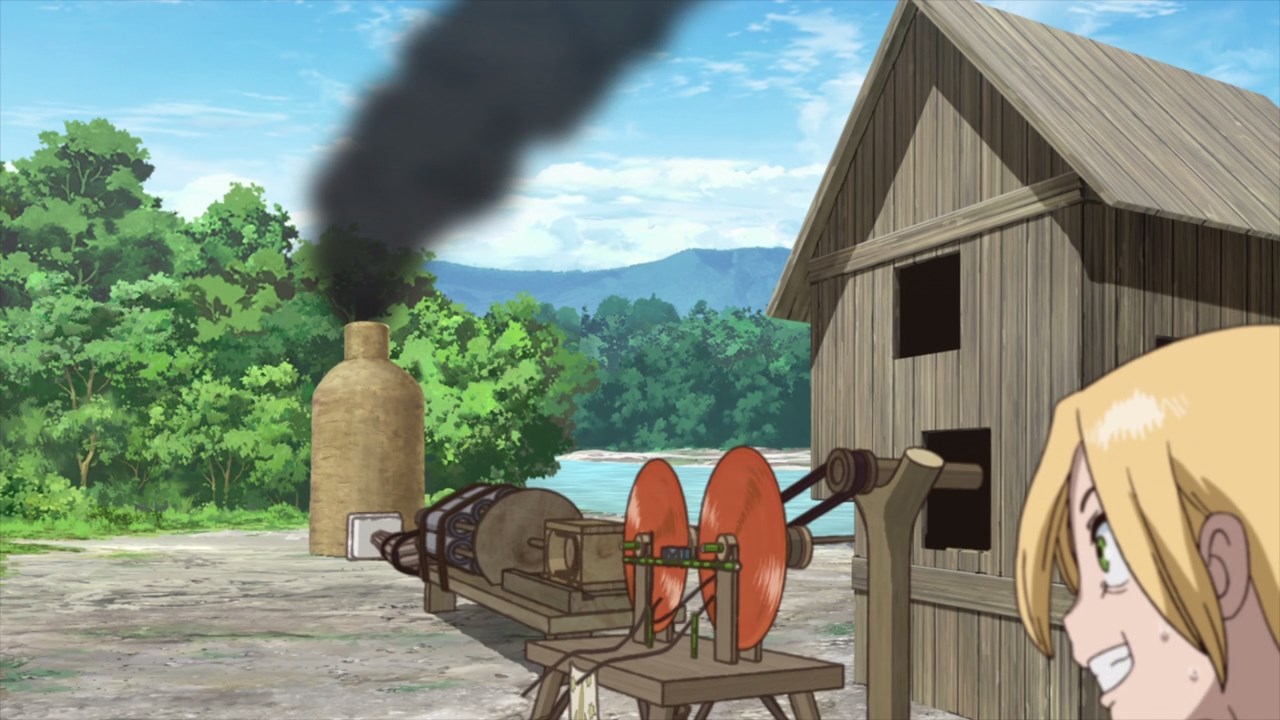 This means that the likes of Ginro won’t have to work themselves of blowing air into the furnace. Gotta say that the age of machines has begun in the stone world! 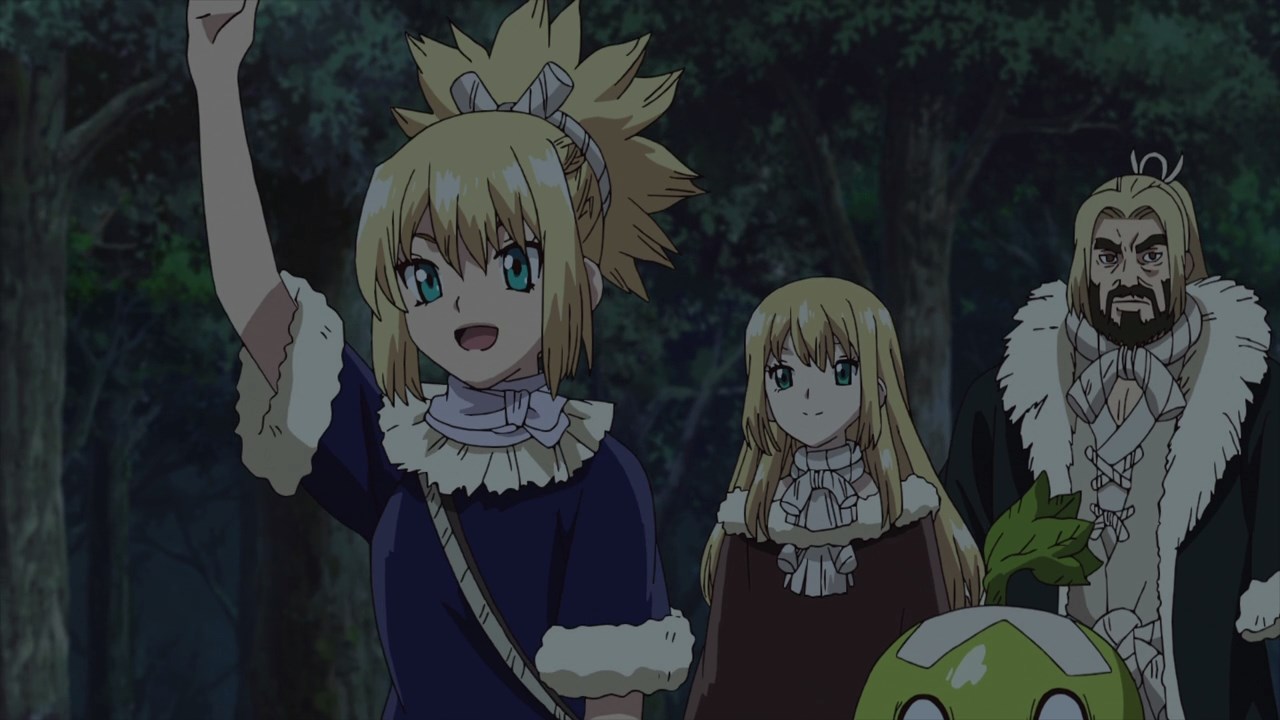 Now then, winter has finally arrived and everyone are gathered for this special event. This includes Kohaku, Ruri, and Kokuyou as they’re gonna see something they have never seen before. 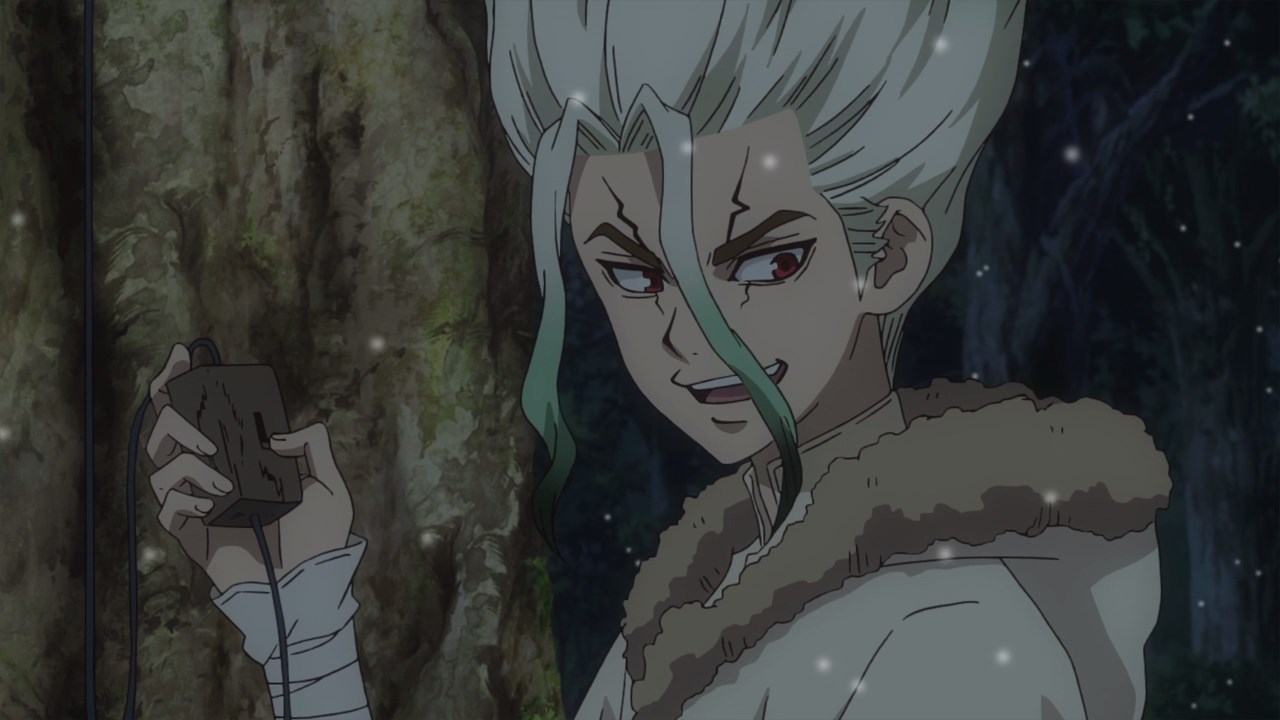 Without further ado, here’s Senku Ishigami where he’ll show something for this wonderful occasion! 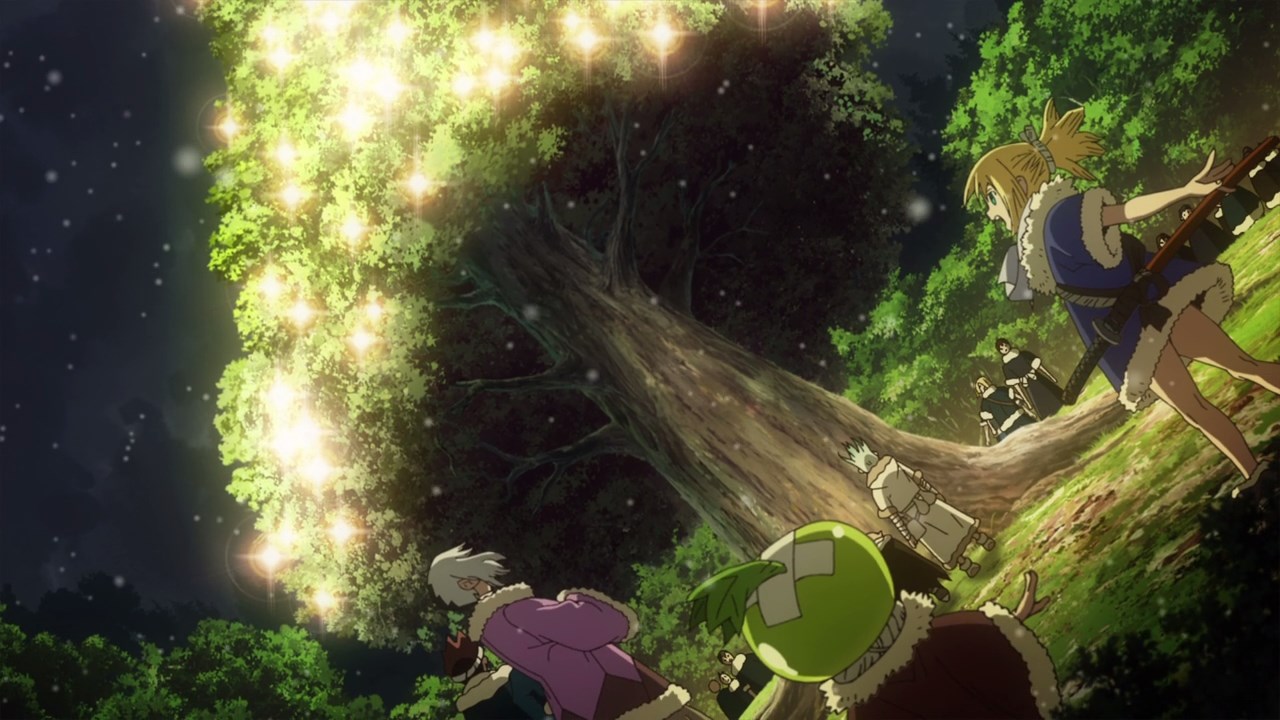 Turns out, he brought Christmas lights into the stone world! Yeah, it’s actually Christmas but here the thing though as Senku and his friends improved the light bulb by adding mercury.

Despite being a dangerous element that must not swallow, mercury can catch air and create a vacuum which would help light bulbs last longer. 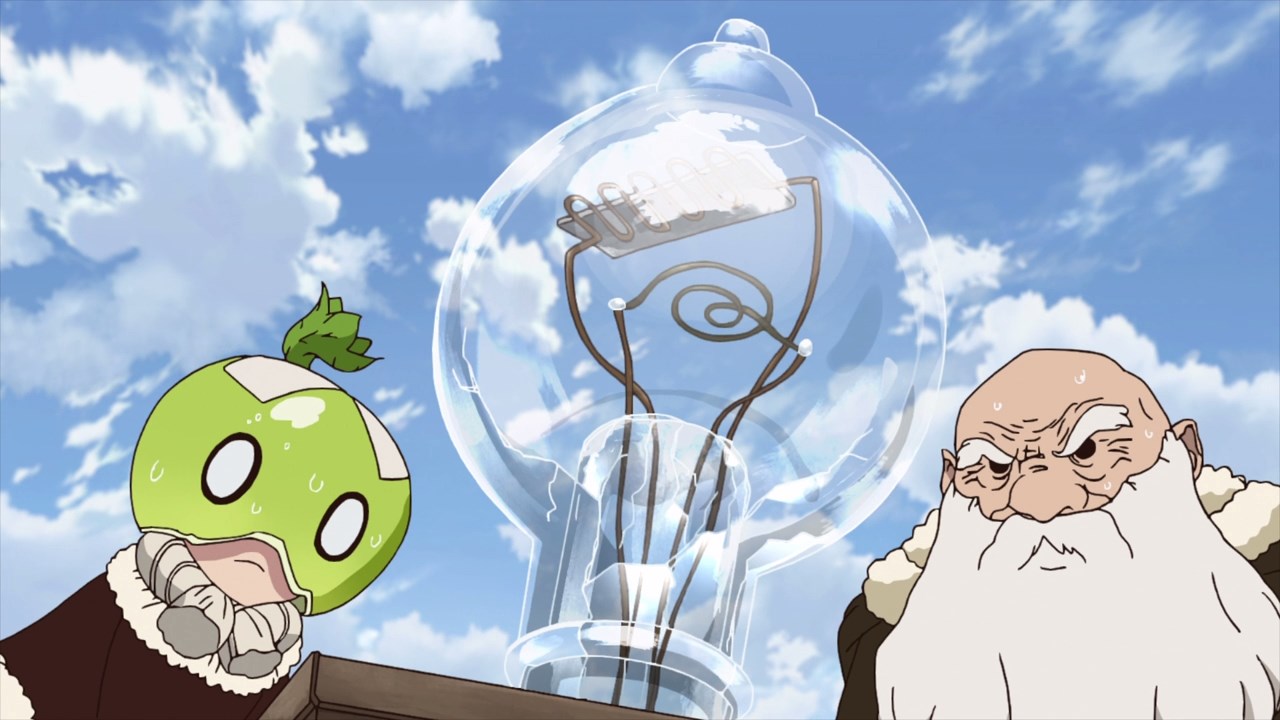 Unfortunately when it comes to vacuum tubes which is important on bringing electronics, it’s a different beast as it’s harder to make one that won’t break.

As you can see, Suika and Kaseki are surprised that a vacuum tube got shattered due to the copper’s thermal expansion. 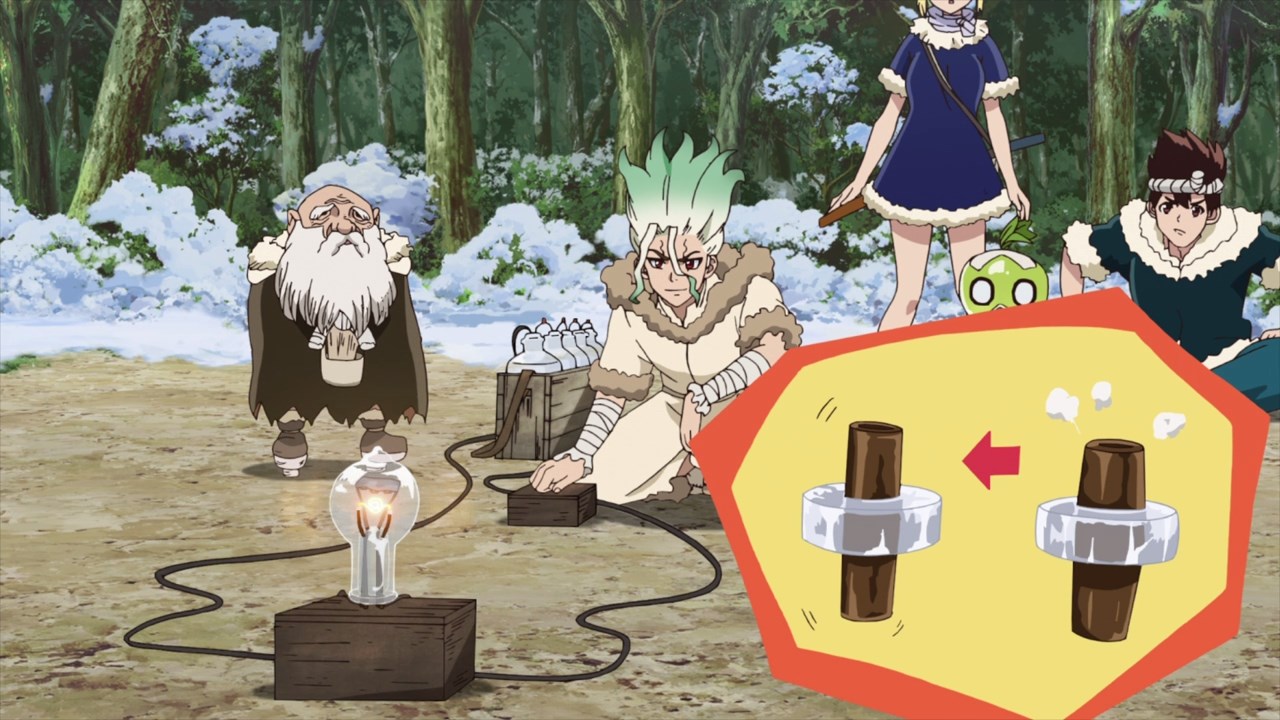 Luckily, there’s a solution as Senku created a copper tube which would expand inwards instead of outwards. Despite solving one problem, making vacuum tubes is difficult. 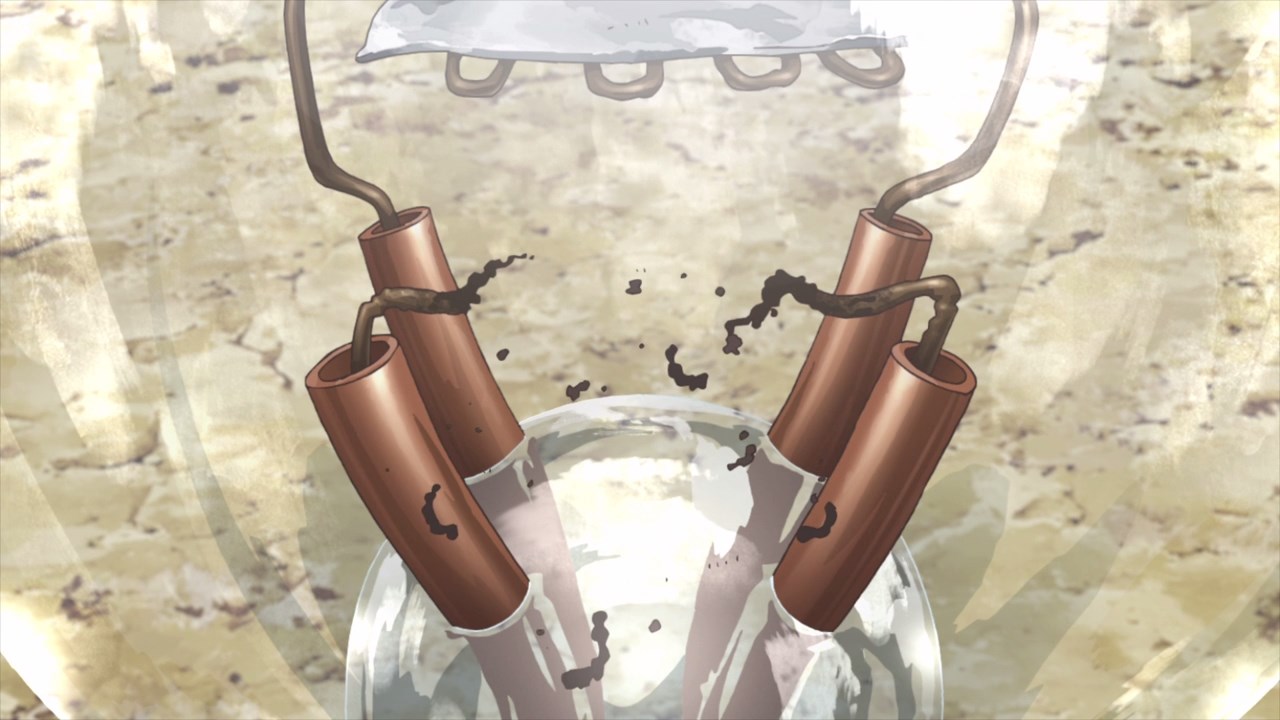 Turns out that using bamboo filament is the limiting factor when it comes to emiting light or in the case of vacuum tubes, conducting electrons for longer periods.

So yeah, seems that Senku and his friends hit a wall on creating vacuum tubes and they don’t have time left to perfect it. Guess they’ll have to find a stronger material that can replace bamboo as the filament. 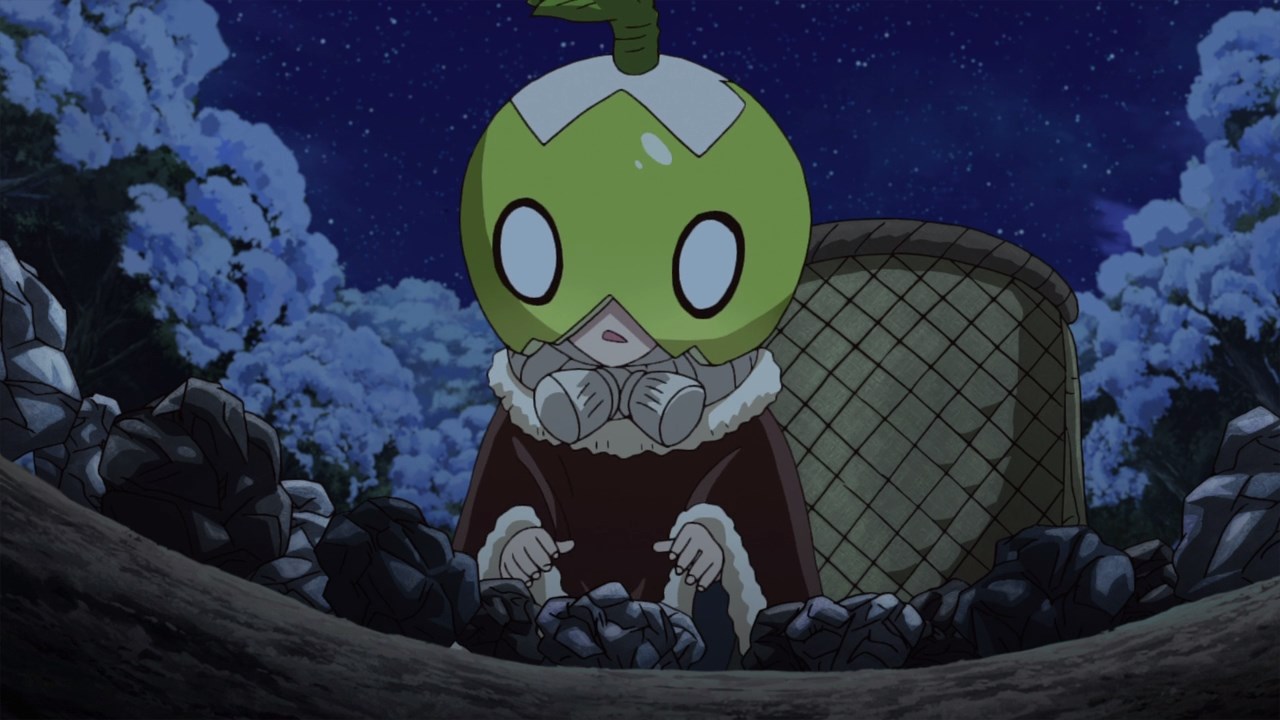 Well, it appears that Suika is finding one right now as she checks on various rocks to see which one of them is viable. Then again, Suika can’t tell about one which ore is the best one as a filament. 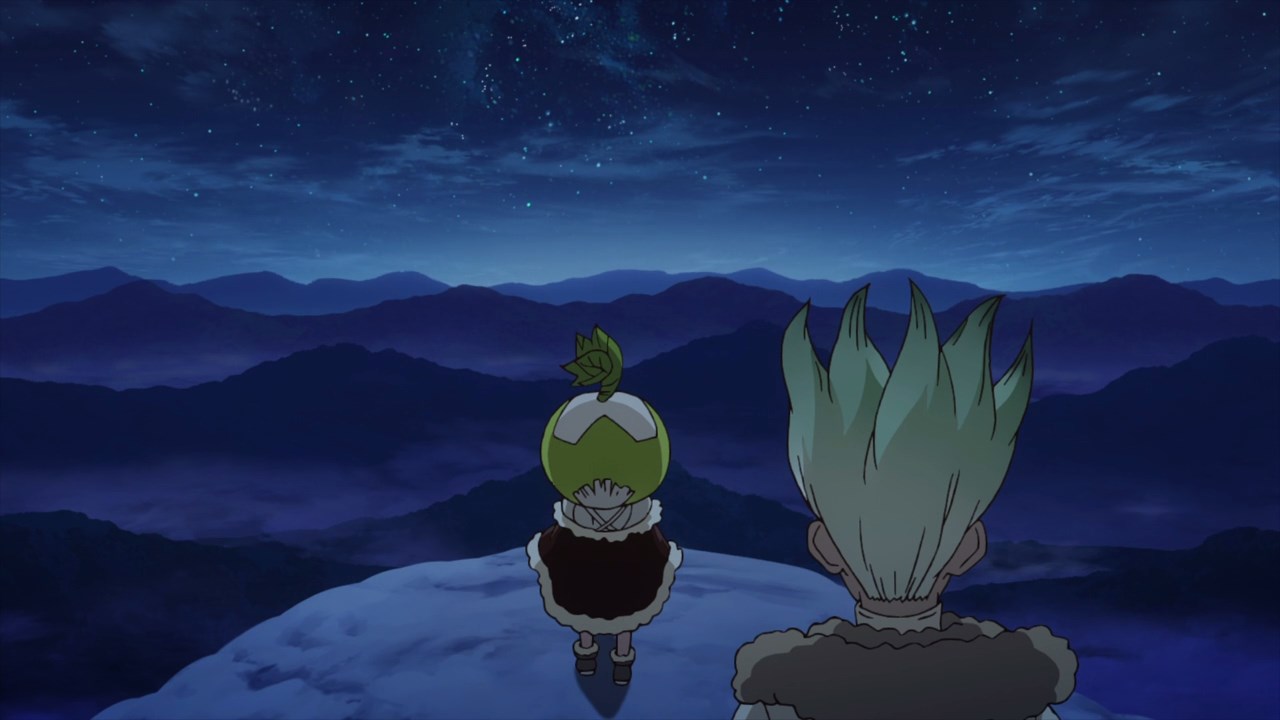 But anyways, time to bring in the new year as Senku and the villagers will see the first sunrise over the horizon. 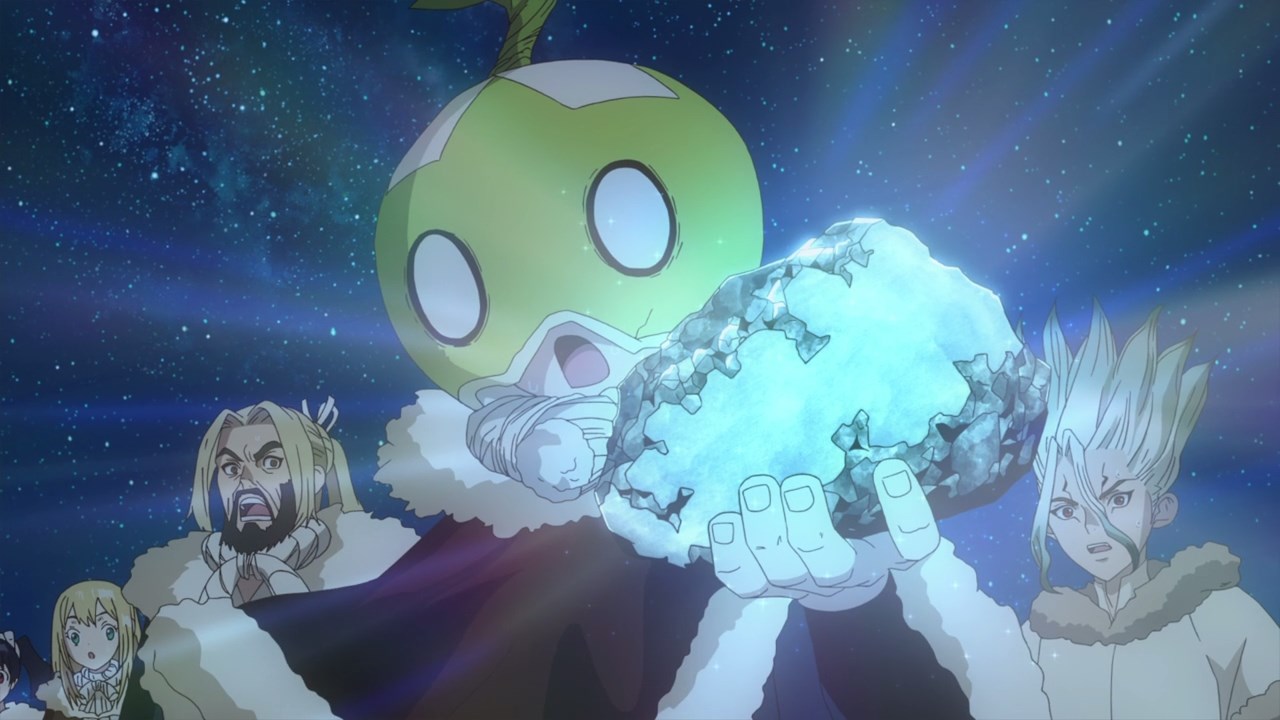 On the other hand, it appears that Suika found an ore that glows upon exposing to ultraviolet light, which is being emitted from the sun. 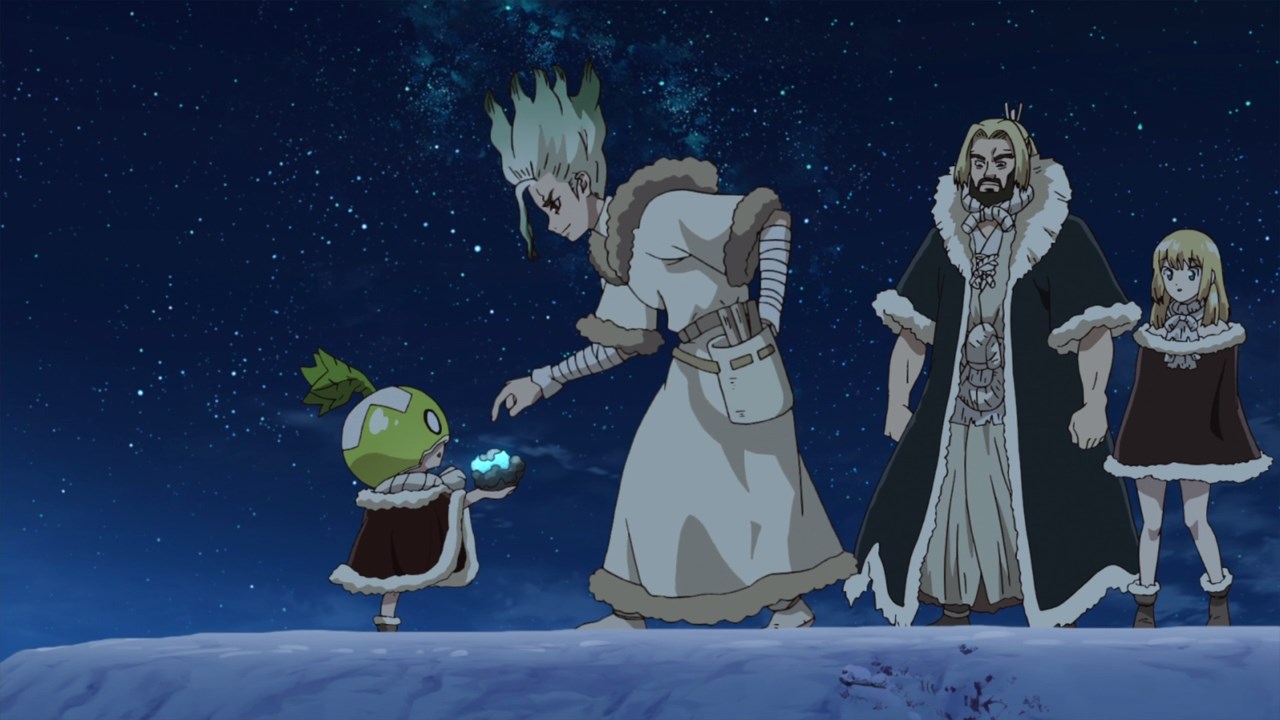 For Senku, he’s surprised that Suika found a jackpot as what she’s holding is scheelite, an important ore that contains the toughest metal known to man: Tungsten.

Anyways, tungsten is important because it’s not only hard, but it has the highest melting point which is a perfect material for filaments. 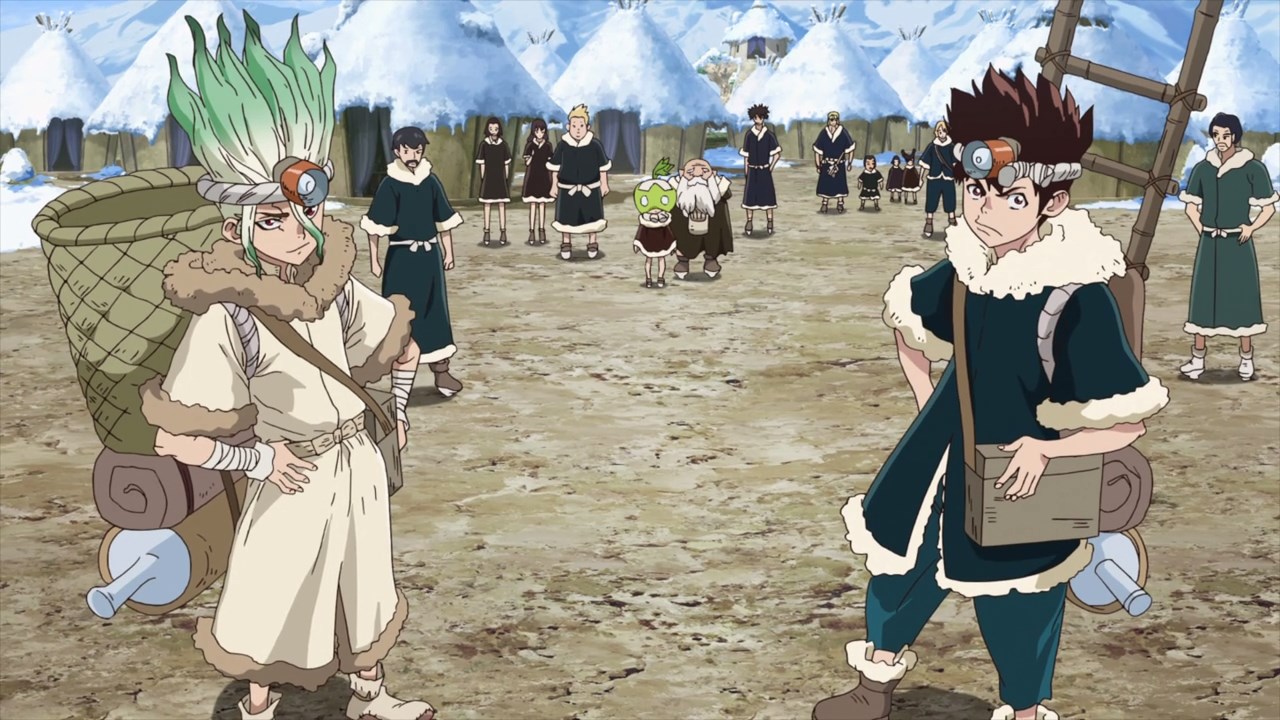 Now that Senku Ishigami found the right material for his light bulbs and vacuum tubes, it’s time to get some more scheelite as he’s joined by Chrome where he found the ore at a cave.

Of course, they can’t mine scheelite on their own as they need more people to help them. But who will join both Senku and Chrome on their exploration? 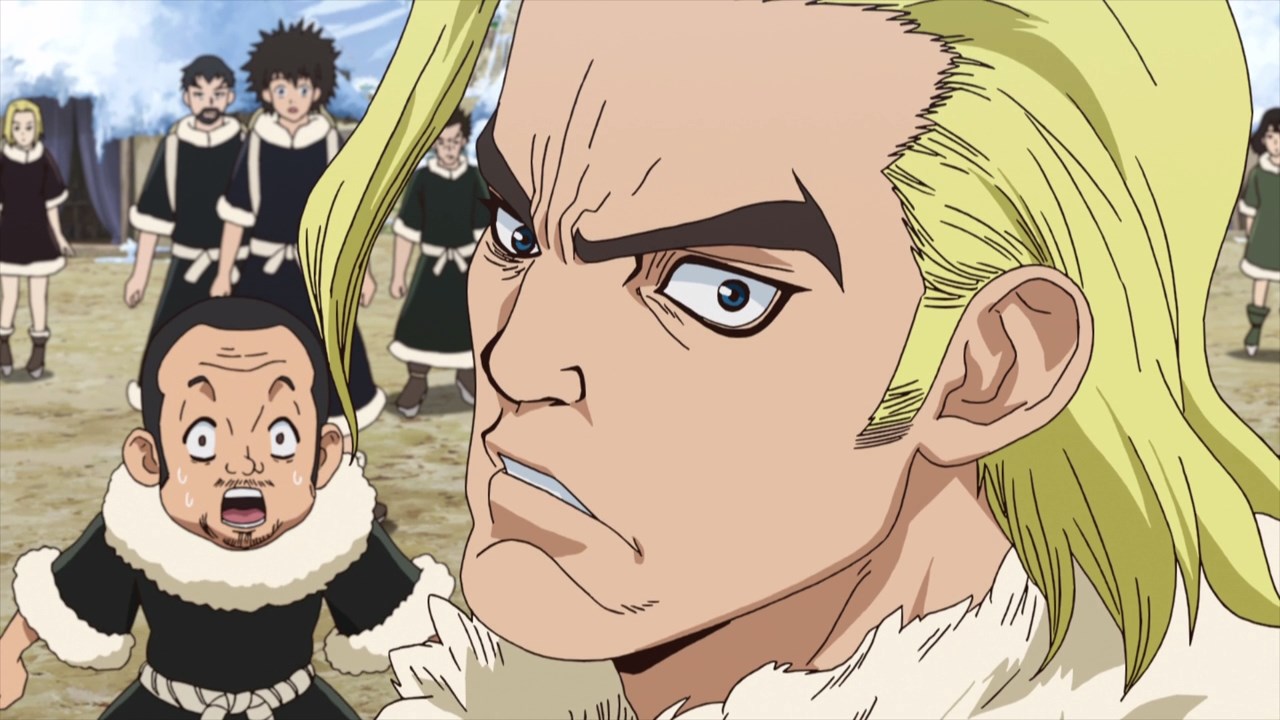 Oh wait, don’t tell me that Senku and Chrome are gonna take Magma (and Mantle)? I have a bad feeling about this because let’s not forget that Magma is still salty when his chances of becoming a village chief got snatched away by both sorce- I mean, scientists.

Anyways, let’s hope that nothing bad will happen on the next episode of Dr. Stone!