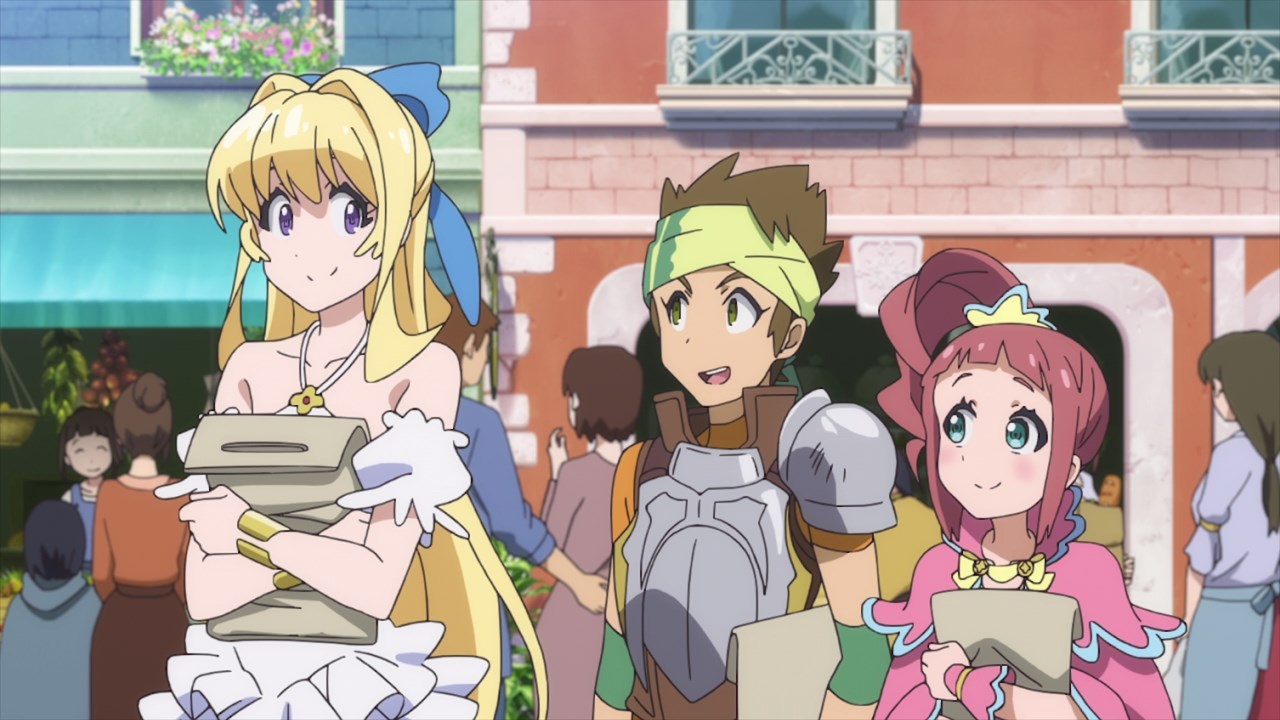 Well everyone, we’ve reached the penultimate episode as Ristarte, Mash, and Eruru are taking their free time shopping some goods for the upcoming battle against the Demon Lord.

Now then, the only thing they need to wait is Seiya Ryuuguuin. Of course, I wonder where’s the cautious hero? 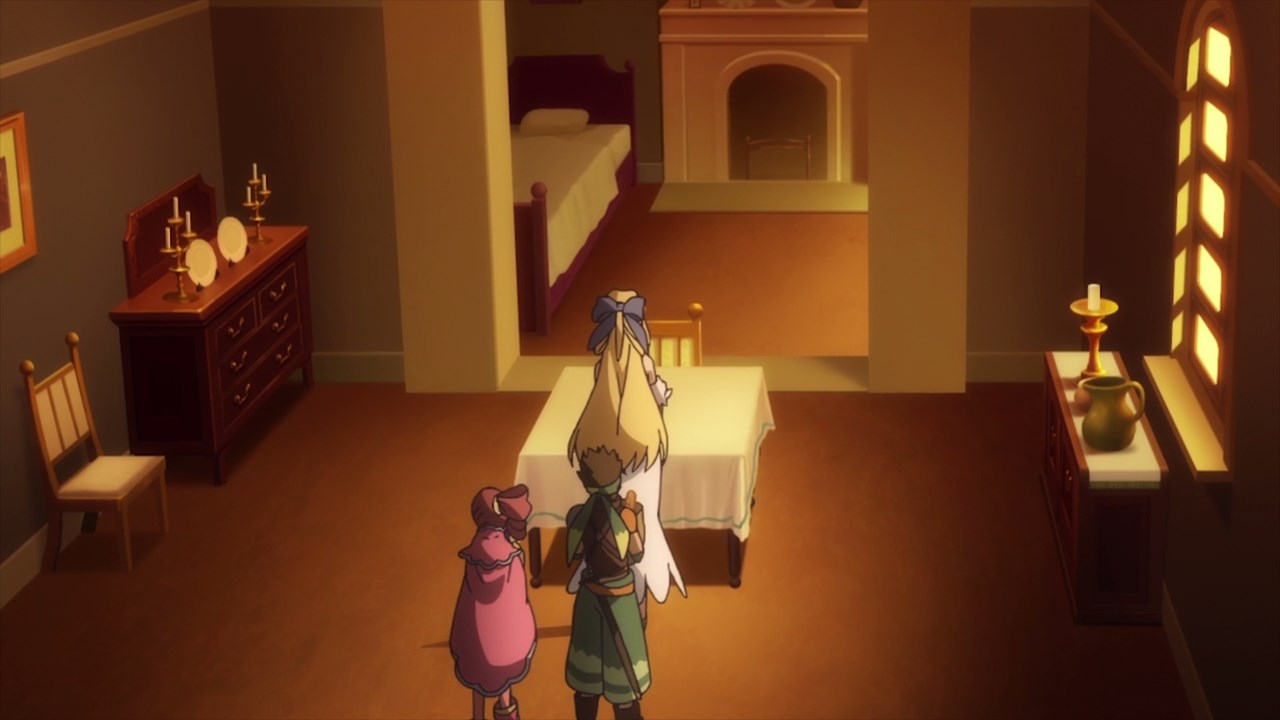 Oh, he’s not here at this hotel room. I wonder if Seiya went to find some rare items in order to create stronger weapons?

Hell, what if Ryuuguuin went to fight against the Demon Lord by himself? Wait, there’s no way that the cautious hero would do that! 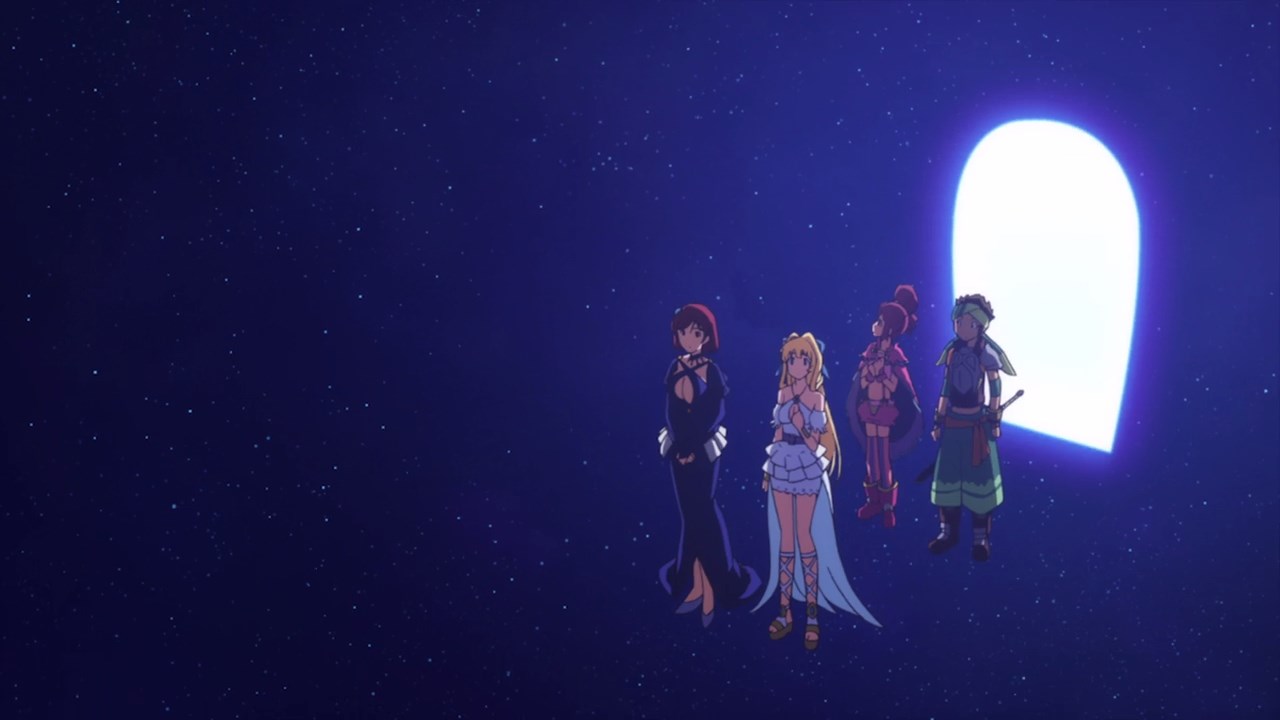 So, there’s only one thing to do… and that is asking Ariadoa in regards to Seiya’s whereabouts. But first, Ariadoa told Ristarte that Ishtar wants to see her. 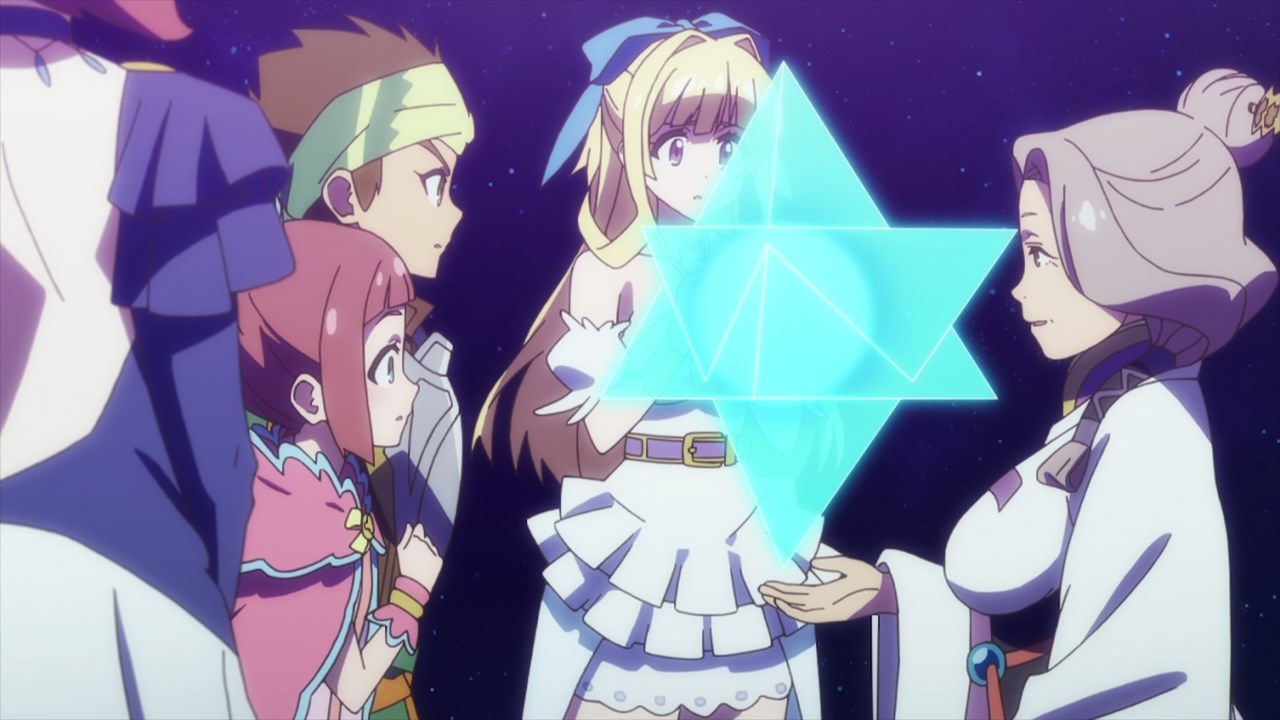 Anyways, Ishtar told Ristarte and the dragon-born warriors that Seiya Ryuuguuin went off to fight the Demon Lord by himself. Yeah, Ristarte was shocked that he’ll fight the boss character without any training.

Speaking of training, Ishtar told her that there’s no need for Seiya to train as she shows his true stats. 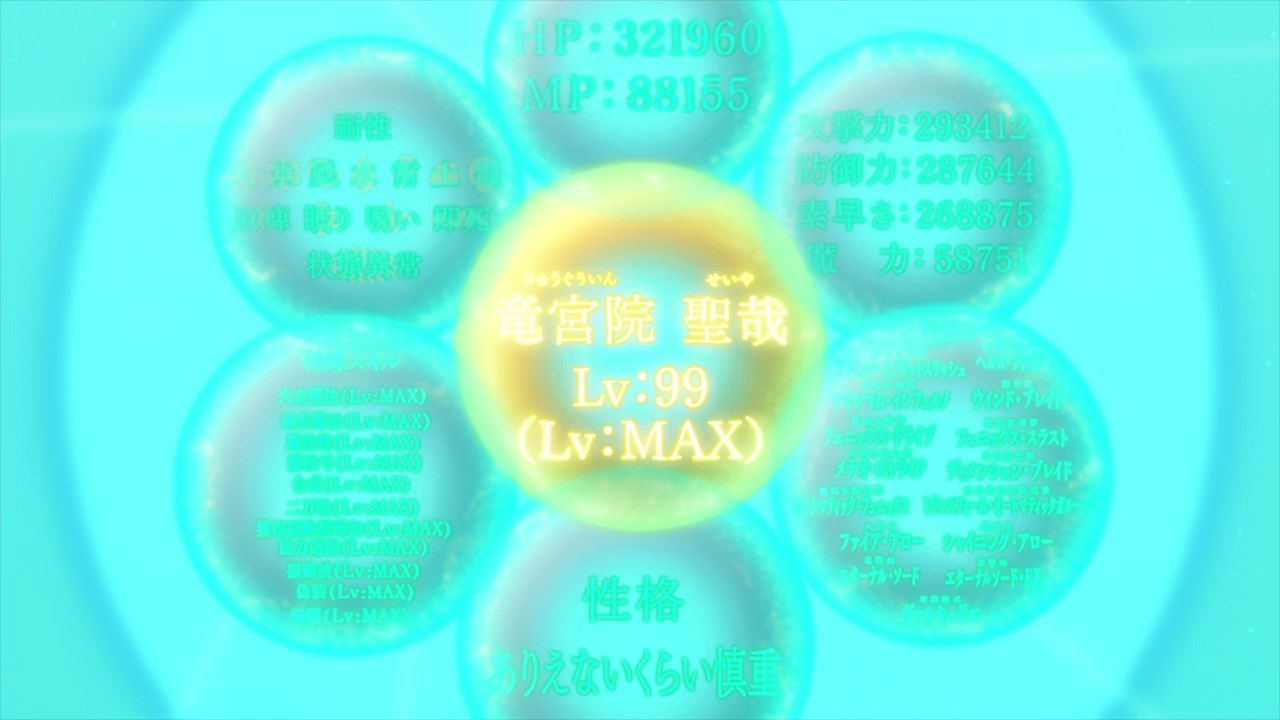 Turns out, it’s maxed-out. But of course, having reached the maximum level is not enough for Seiya Ryuuguuin due to his enemies being cautious, so he learned various spells in order to compensate his level cap.

Honestly though, seeing him reached Level 99 through sit-ups alone is quite impressive, but it’s sad that Ryuuguuin can’t go beyond Level 99. Man, I wish someone would raise the level cap. 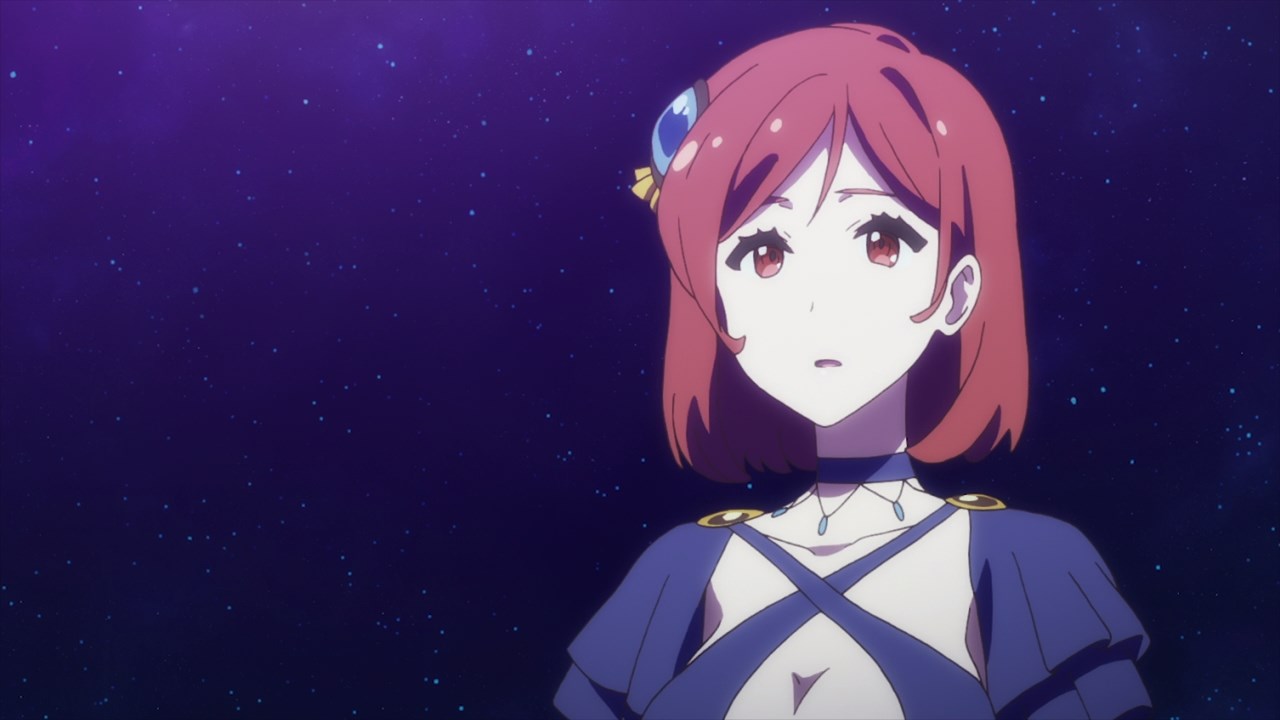 Meanwhile, here’s Ariadoa and remember the time that she failed to save one world from a demon lord? Well, she’s gonna tell it right now. 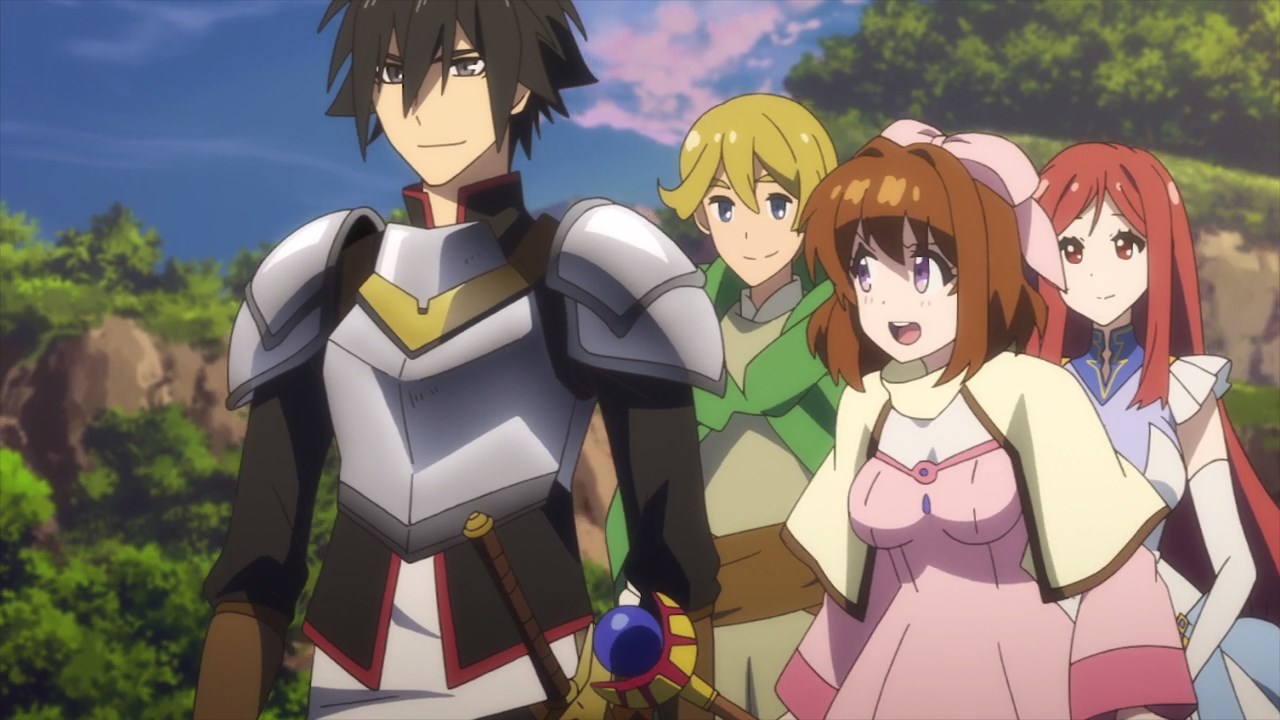 You see, 100 years prior to the start of this series, Ariadoa summoned a hero in Ixphoria that resembled Seiya Ryuuguuin.

Well actually, this is Seiya Ryuuguuin as he’s joined by Princess Tiana and Colt in addition to Ariadoa where she acts as her guide. 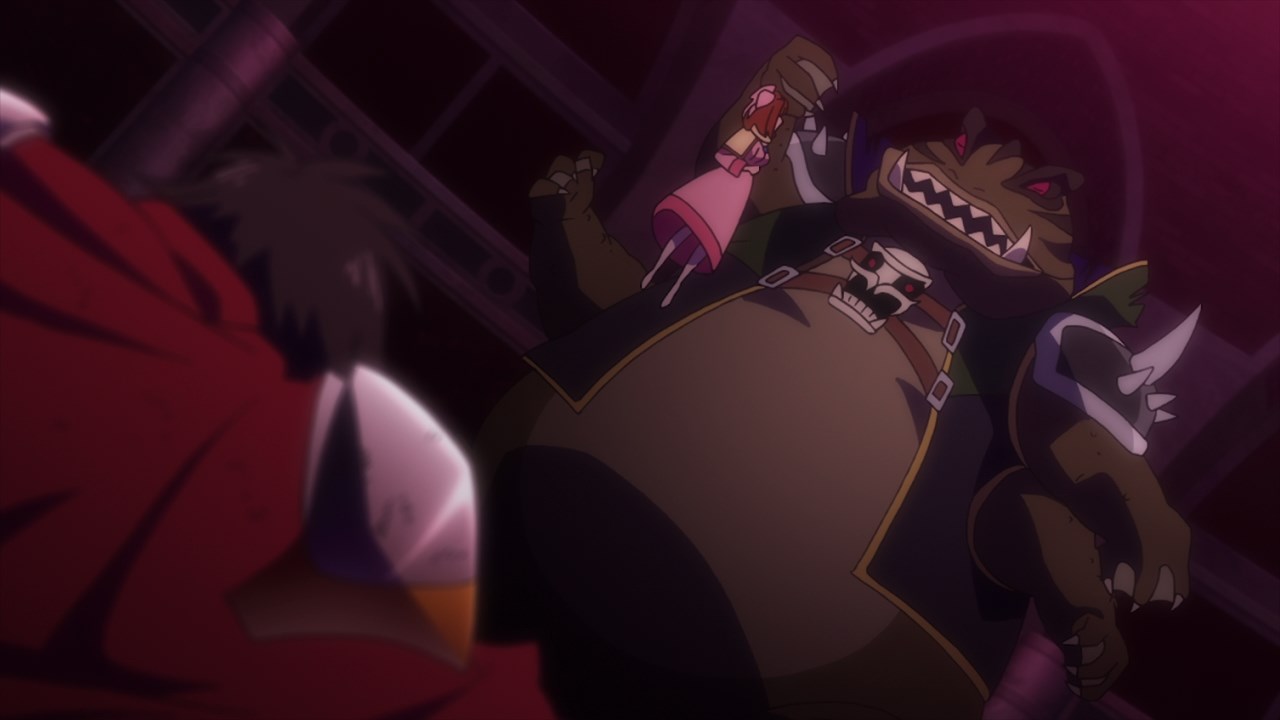 Unfortunately, their road of defeating the Demon Lord ended in a tragedy with Seiya failed to kill it due to his recklessness, as well as not taking Ariadoa’s advice on finding more information about the Demon Lord’s abilities like resurrection. Because of this, Ariadoa regretted on not helping Seiya much and thus Ixphoria was destroyed, although I don’t know what happened to that demon lord after various gods erased Ixphoria.

As for Seiya Ryuuguuin, he may have forgotten this tragedy but it seems that Seiya swore to himself that he’ll become very careful from now on so that he won’t see any of his friends killed. Hence, he becomes the cautious hero when Ristarte summoned Seiya in Gaeabrande.

And speaking of Ristarte, it was revealed that she was reincarnated from Princess Tiana, not to mention that she remembered Tiana’s memories just now. I guess she’s bound by destiny upon summoning Seiya Ryuuguuin. 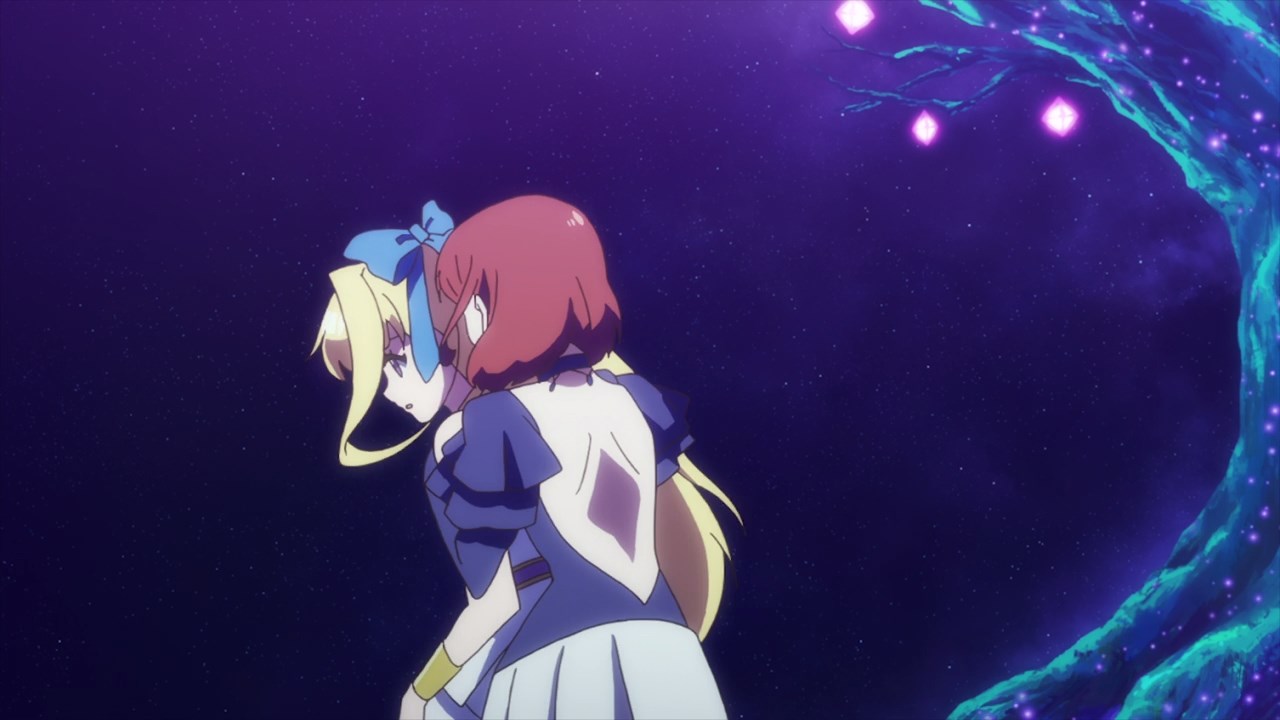 Now that she knows the truth about Seiya Ryuuguuin as well as her previous life, Ristarte attempts to go to the Demon Lord’s castle in order to assist the cautious hero since she’s worried that Seiya might not defeat the Demon Lord on his own. 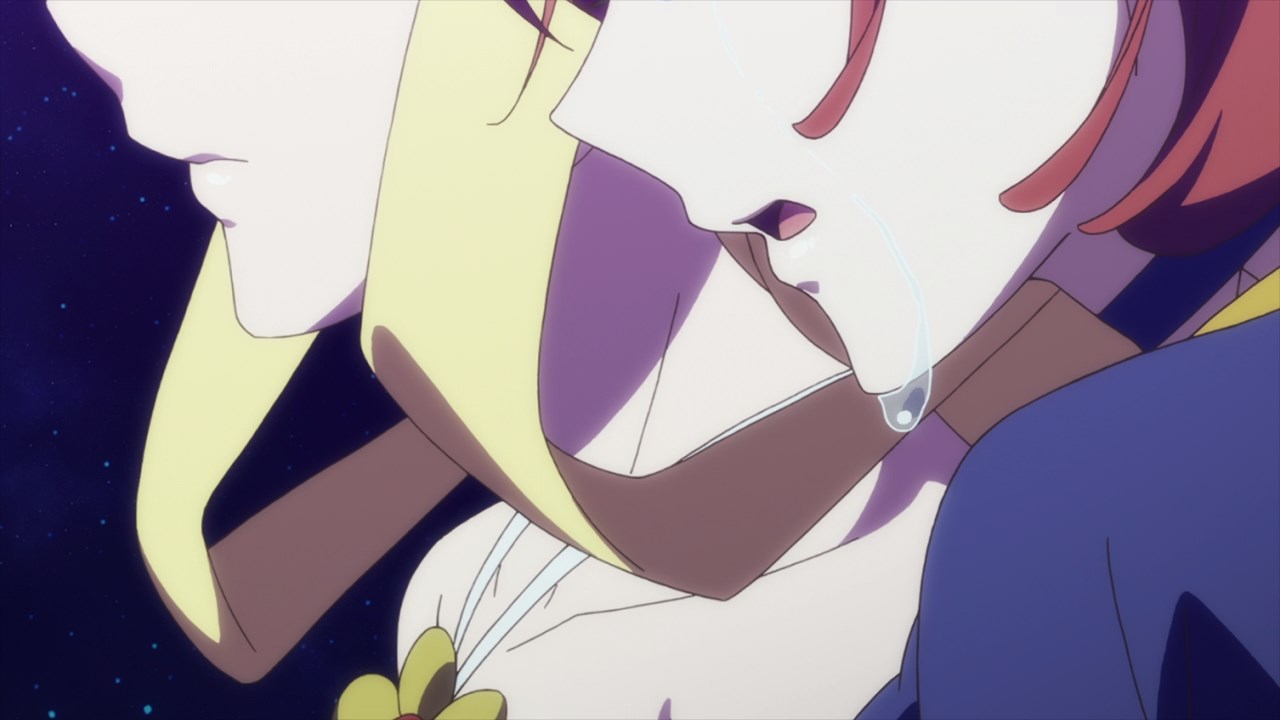 However, Ariadoa doesn’t want Ristarte to risk her life to help Seiya as she doesn’t want to see her friends die again, especially a princess from Ixphoria who was reincarnated into a goddess.

Still, Ristarte won’t stop on helping Seiya Ryuuguuin because she wants to be the best goddess in the Unified Divine Realm! 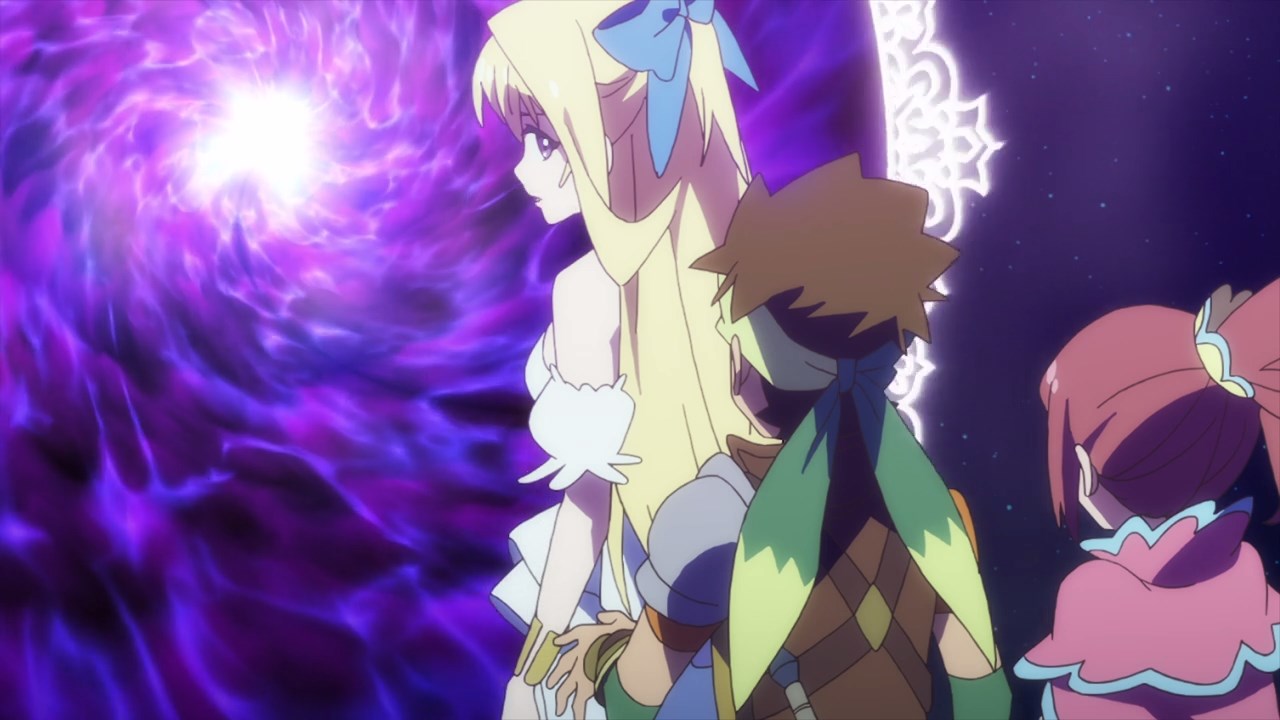 Of course, she can’t go by herself as Ristarte will be joined by both Eruru and Mash. 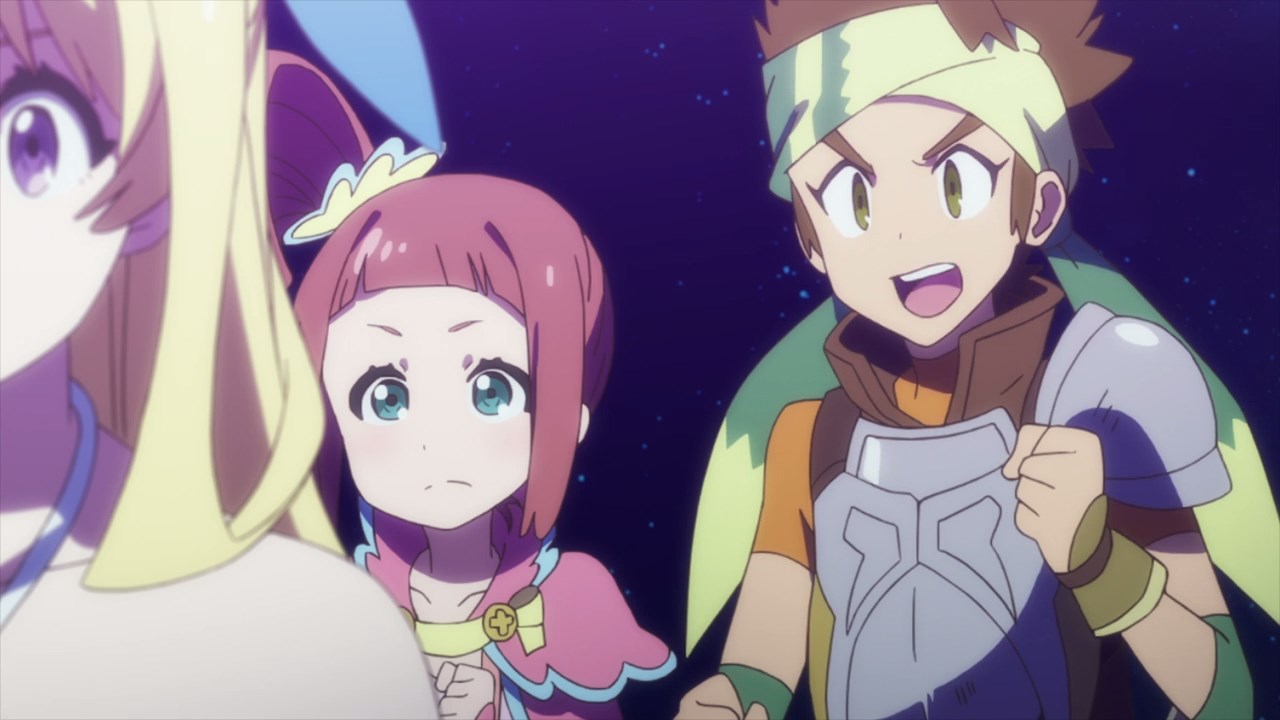 And sure that they’re not as strong as the cautious hero, these two dragon-born warriors don’t want to abandon their teacher dying alone.

Well, I hope Eruru and Mash would do something useful when fighting against a demon lord, especially when that boss character is very cautious on defeating Seiya Ryuuguuin. 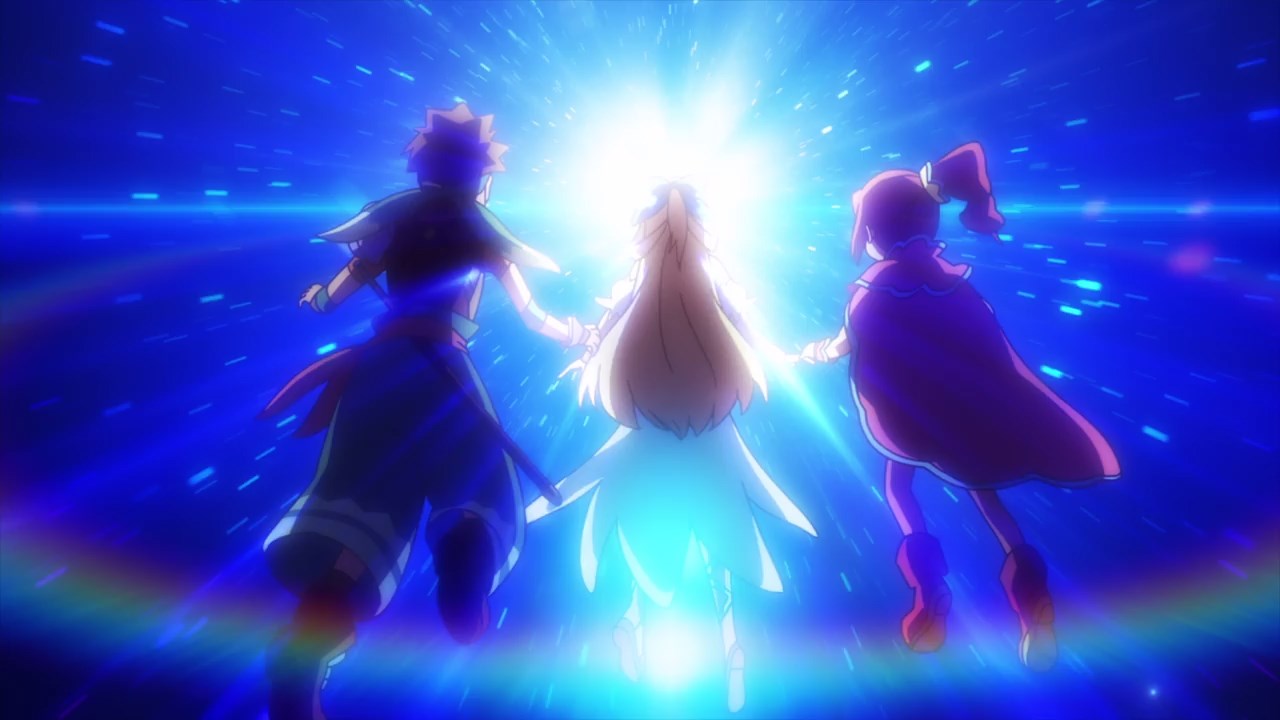 But anyways, tune in next time for the final episode and man, Episode 11 is one hell of a revelation in regards to Seiya Ryuuguuin’s previous life and how his past mistakes has molded into the cautious hero that we see now.

Let’s hope that Seiya succeeds of defeating the Demon Lord in Gaeabrande!