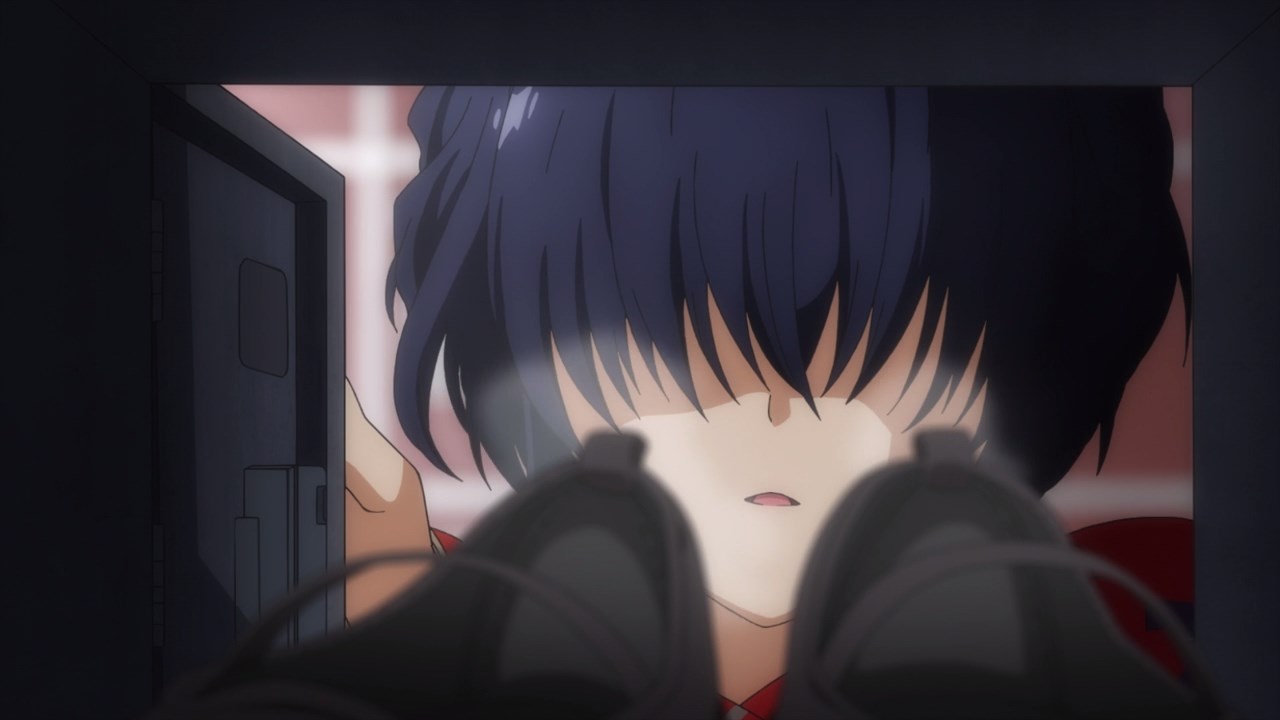 In December 2016, an idol group named 22/7 (or Nanabun no Nijyuuni) was created by Yasushi Akimoto where it described as “idols who transcend dimensions.” This is not the first time Aki-P created 2D idols before as he, Shoji Kawamori, and Mari Okada created AKB0048 back in 2012, and that was a long time ago as most of the idols who formed NO NAME are already graduated.

Now then, A-1 Pictures has created an anime series based on Nanabun no Nijyuuni and it’s been a long time too after they’ve released 3 singles (and music videos) starting with “Boku wa Sonzai Shiteinakatta”. But let’s start right away with Miu Takigawa where she’s the main focus of this show. 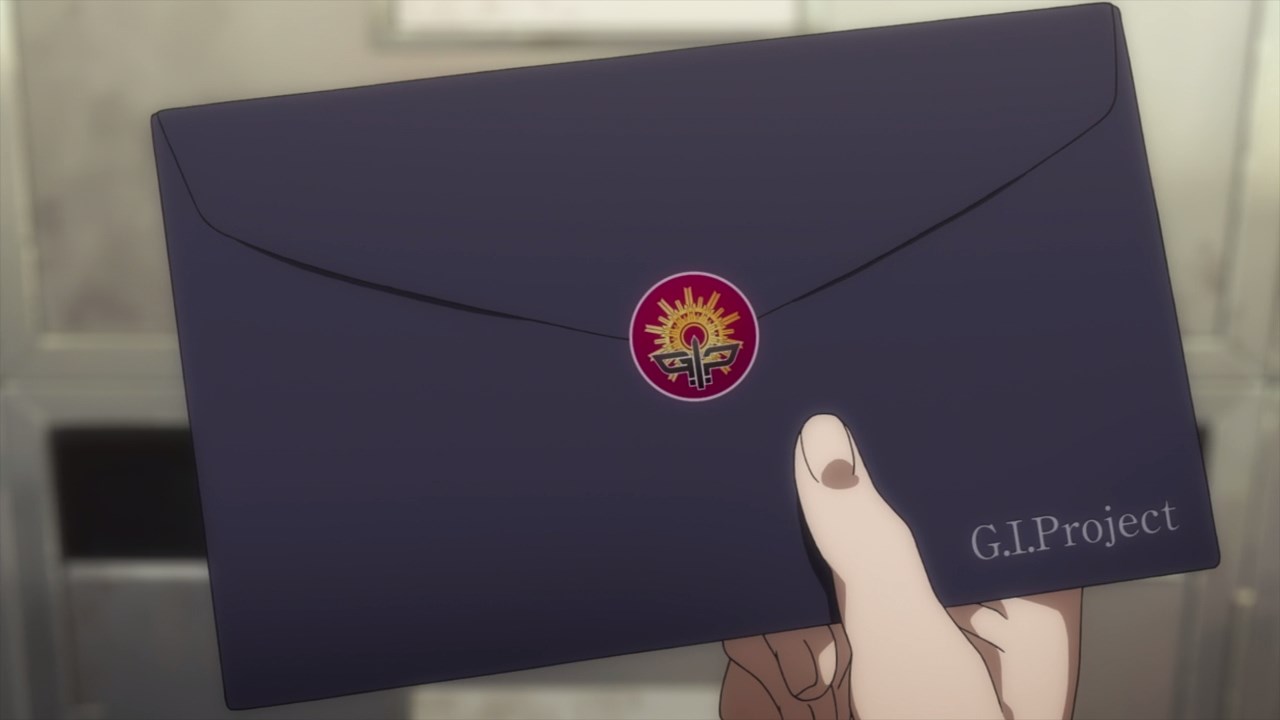 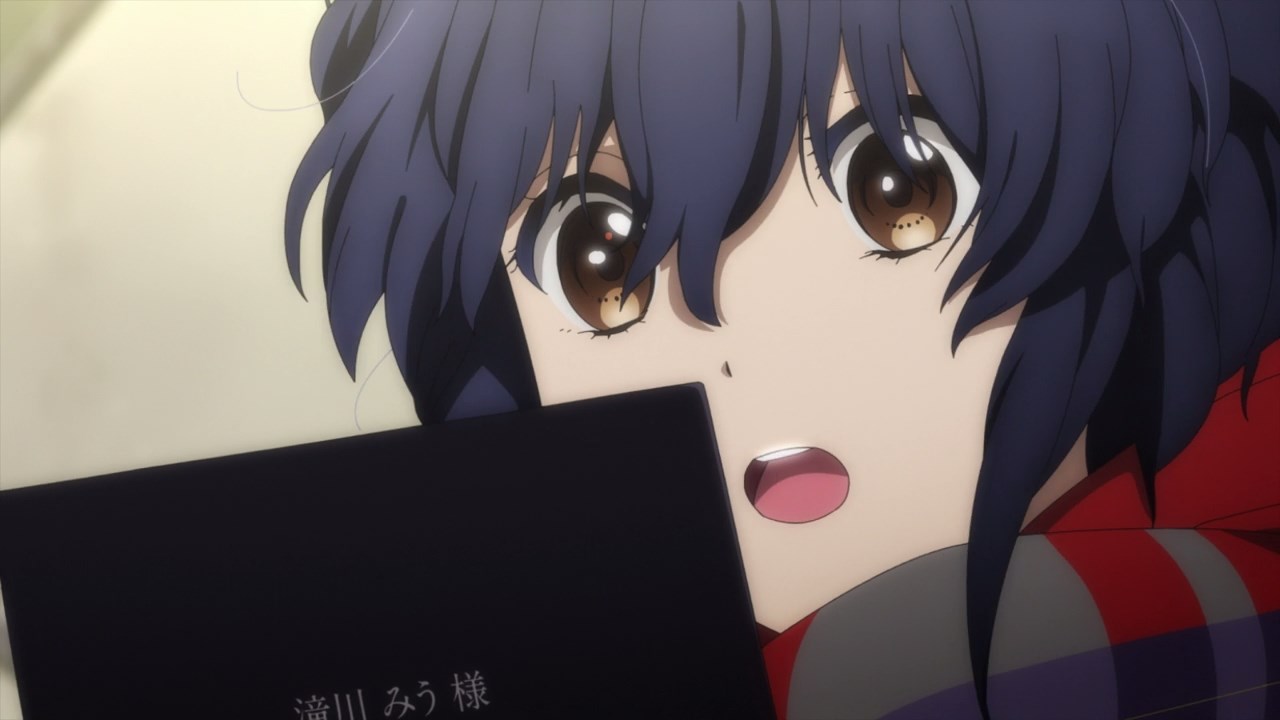 Oh, and not to mention having a mysterious invitation letter from Production GIP in which Miu Takigawa was selected to become an idol. I smell fishy going on here…

By the way, I feel that Miu’s voice actress Nagomi Saijou is a bit inexperienced, but that’s expected since it reminds me of those times watching AKB0048 when some idols are getting first dibs into voice acting like Karen Iwata for example. 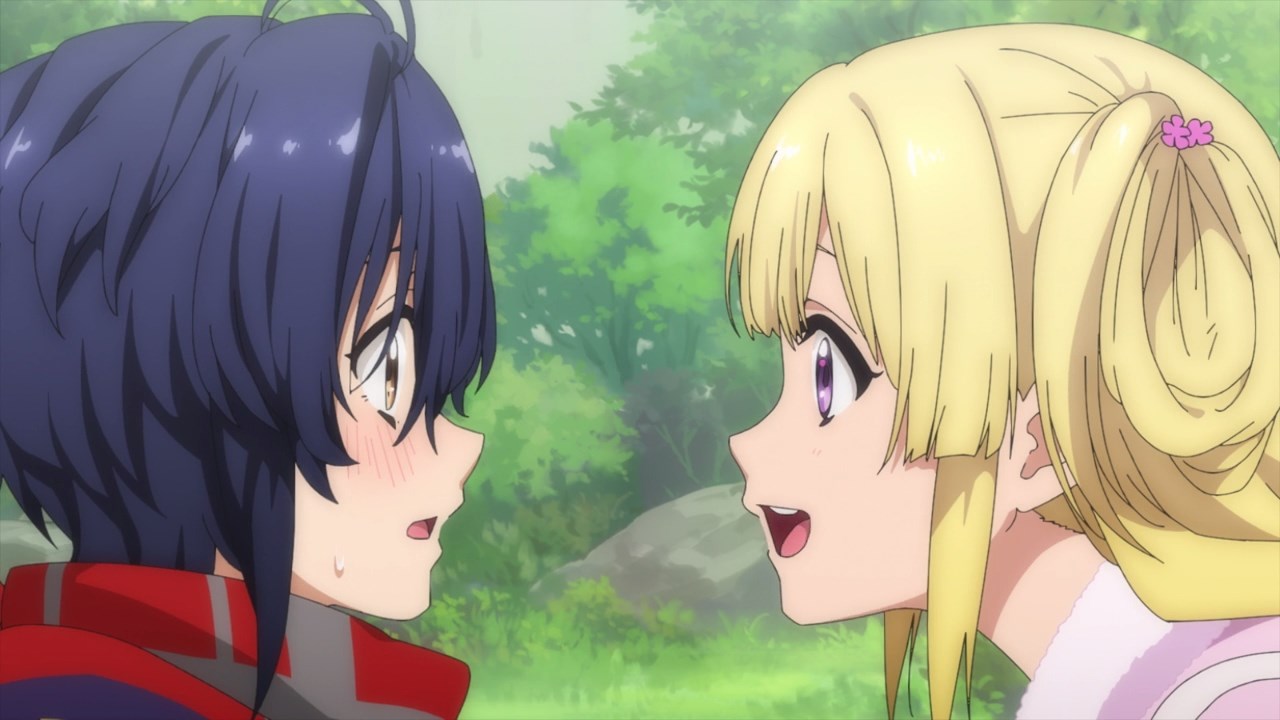 With that said, Miu went to the zoo where she’ll be selected as an idol.

Of course, Takigawa is not the only one who got invited as there are other girls too like Sakura Fujima for example, which she grew up from oversees and thus she’s fluent on speaking English. You may thank Sally Amaki for that! 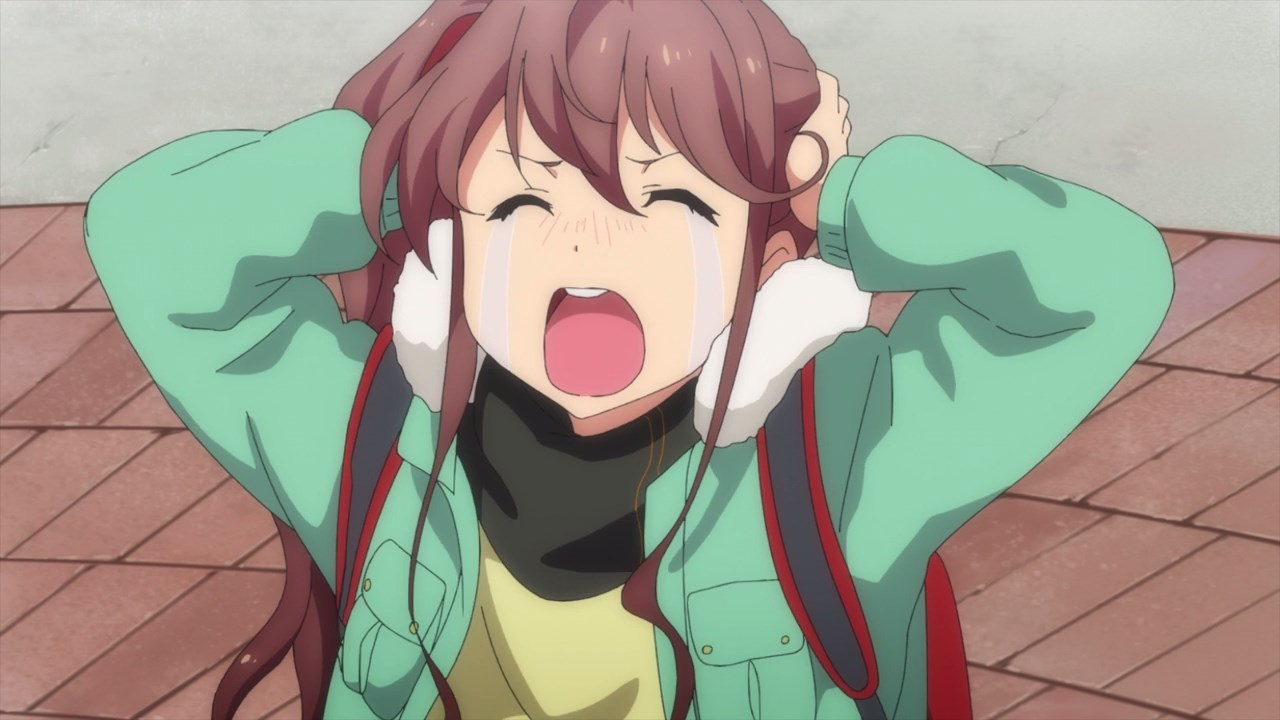 There’s also Jun Toda who is scared that she might taken away by shady people (or gorillas) after being invited at the zoo. Of course, Jun needs to worry about other girls too. 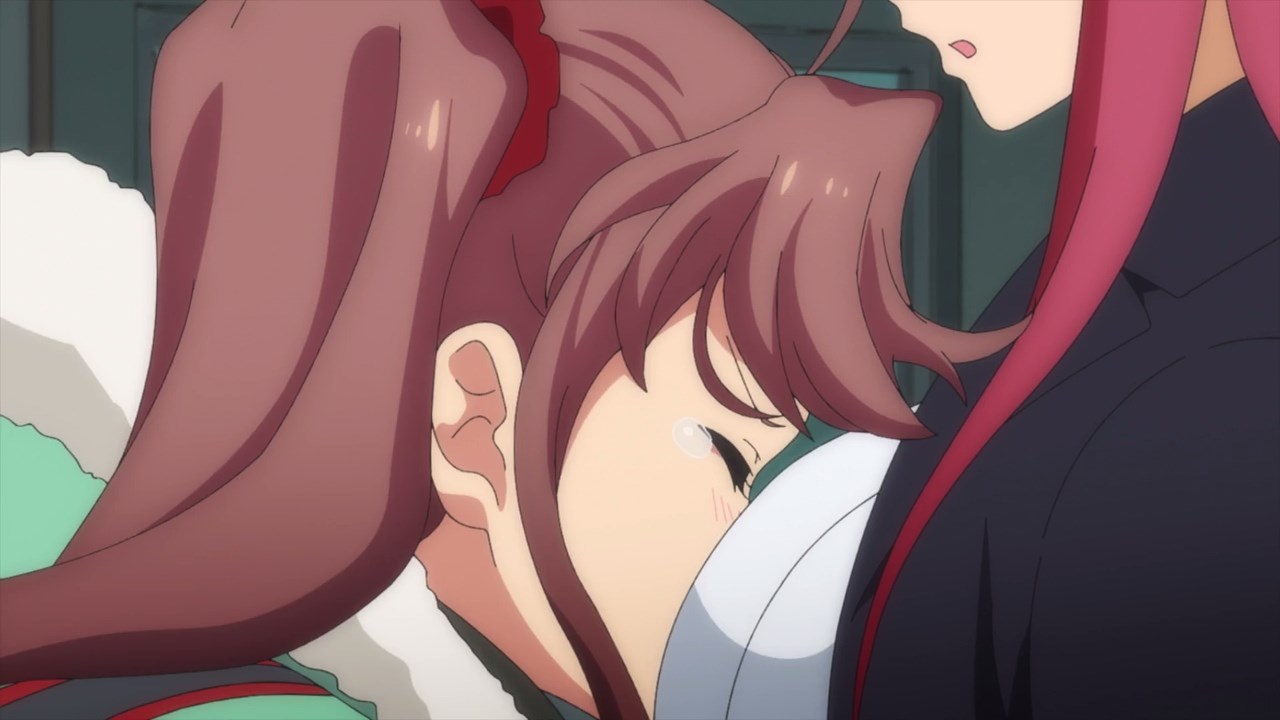 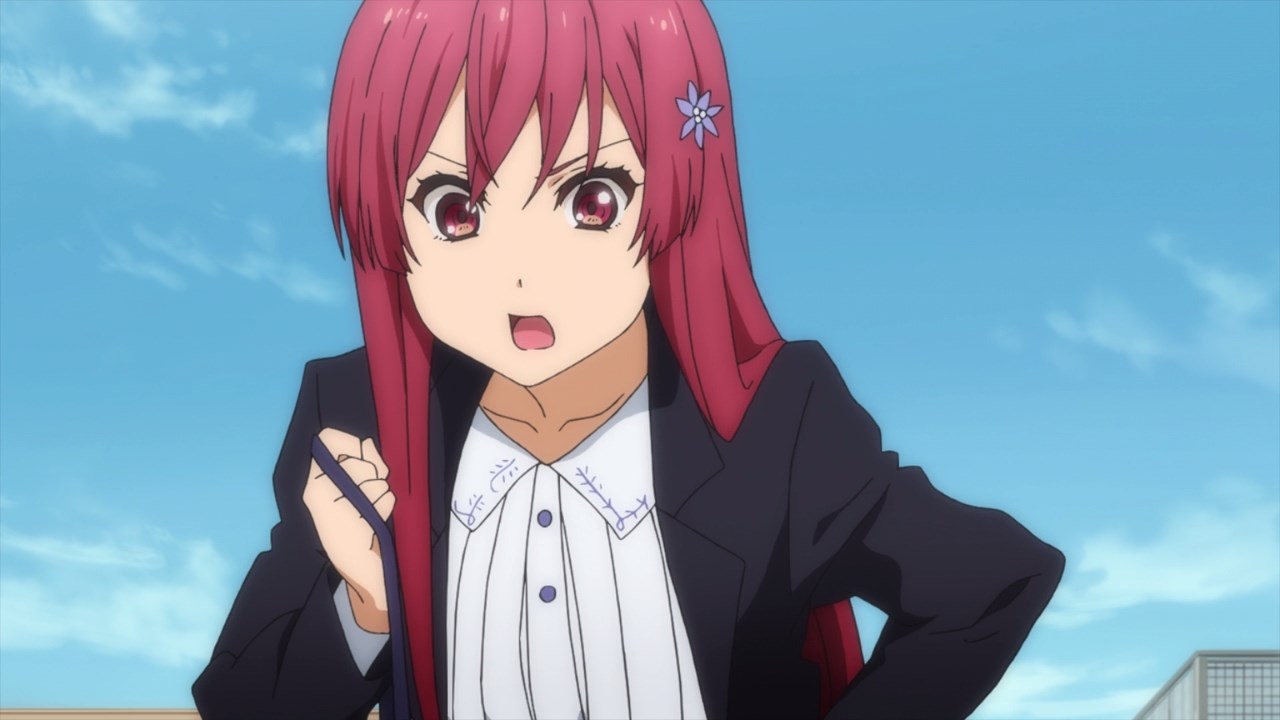 In fact, Toda bumped onto Reika Satou where this honor student got invited. I wonder if Jun got envious about Reika’s breasts since it’s bigger upon landing her face in it? 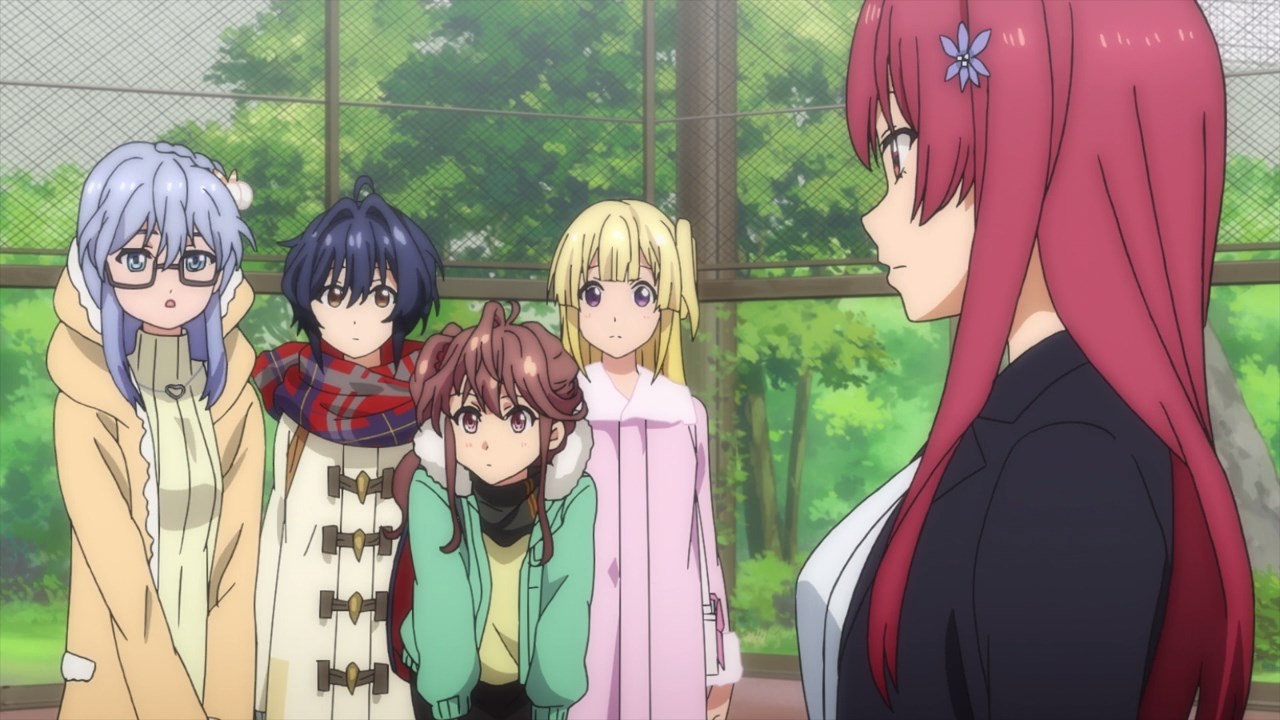 Next up is Akane Maruyama who’s a student council president at her local high school. 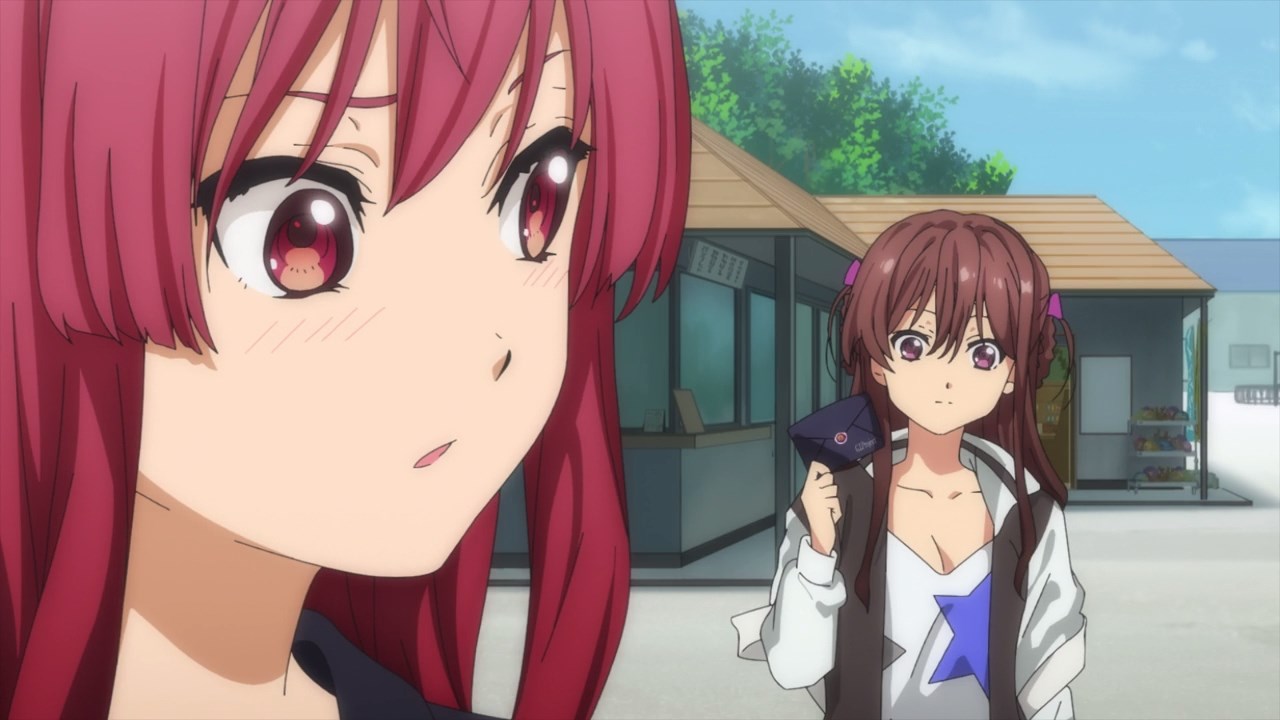 Also joining Akane is Ayaka Tachikawa who said to be an aggressive girl.

I’m sure that we’re gonna explore these girls at one point but right now, this is just the introduction episode. 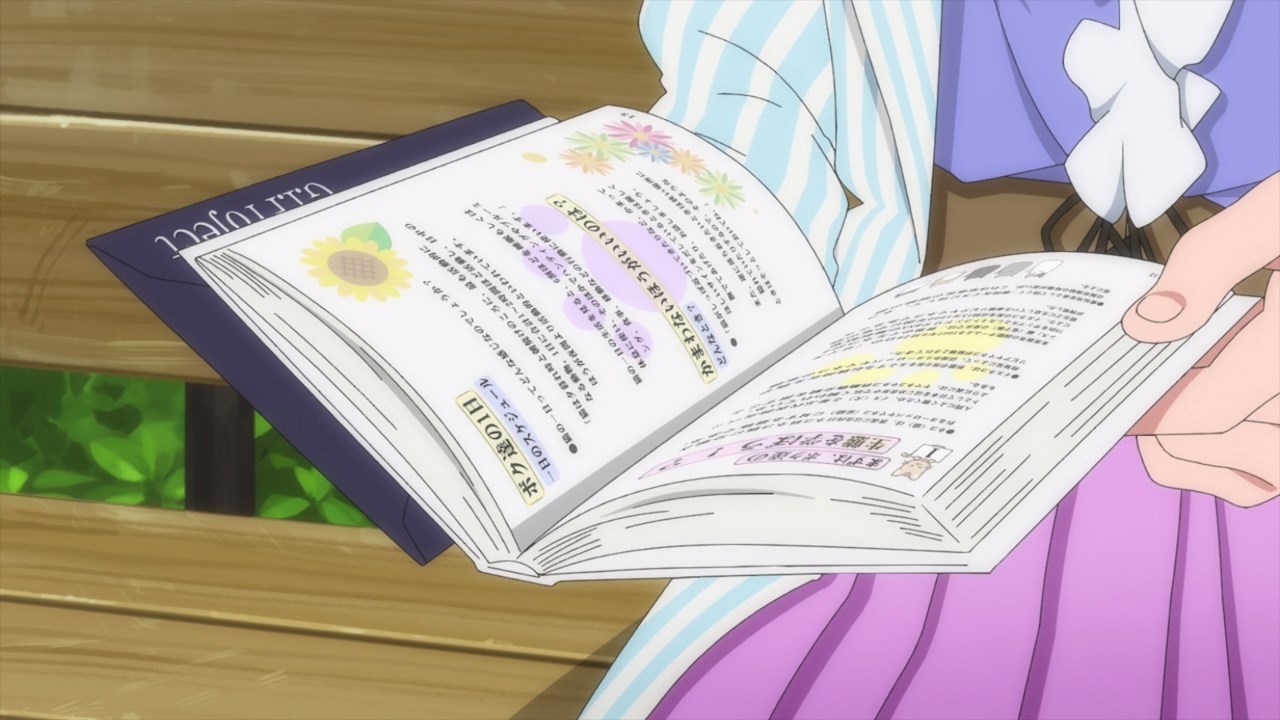 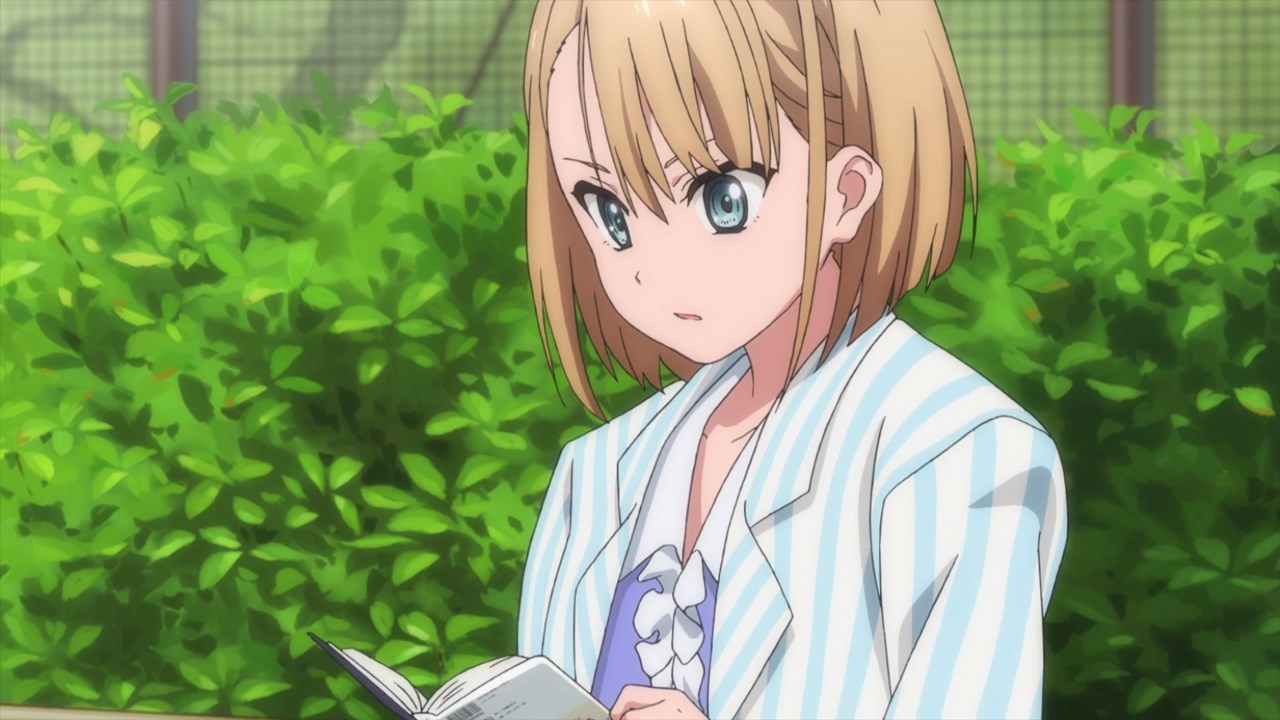 There’s also Nicole Saitou who is sitting at a bench, reading her book to pass the time until a representative from Production GIP shows up. Otherwise, Nicole will leave the zoo because she felt that going there is a waste of time.

Well then, looks like all the girls have finally gathered at the zoo… or is it? 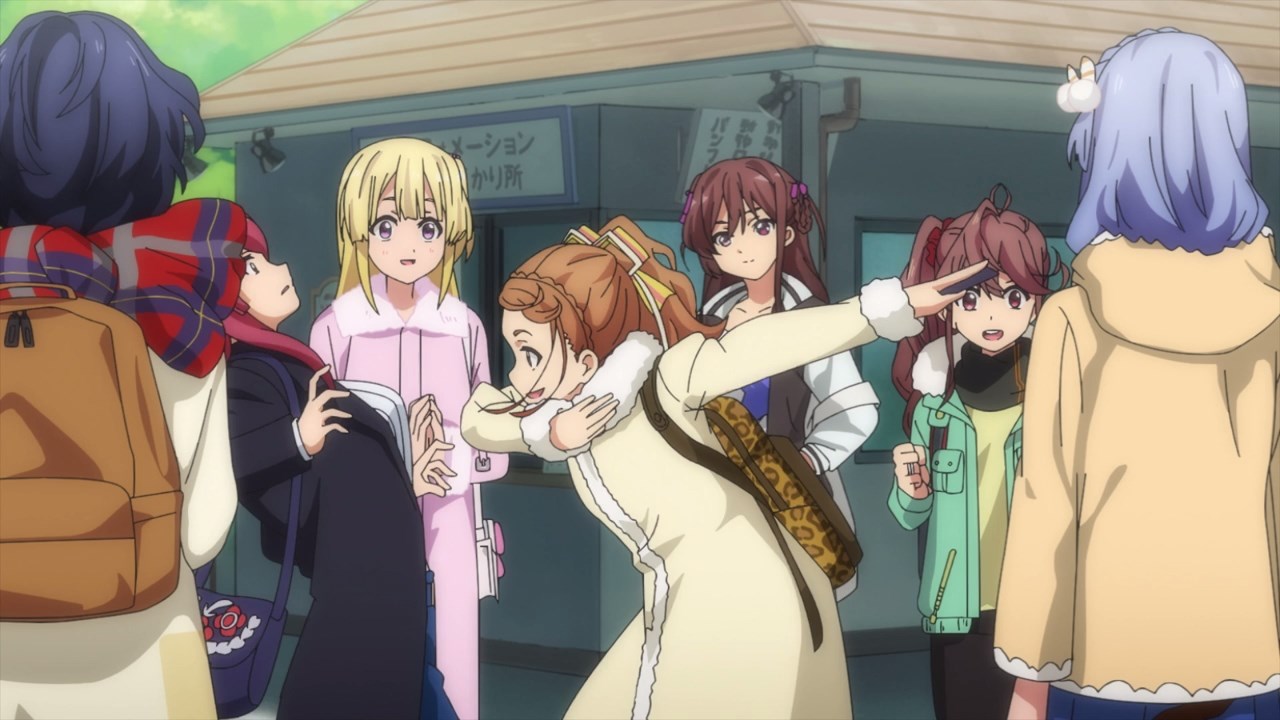 Oh, we got one more girl who got invited at the zoo, as Miyako Kouno arrived from Osaka where she makes her dabbing debut.

Yeah, it’s a lame joke I made but it looks like all the girls have finally gathered. Now then, where’s the representative from Production GIP? 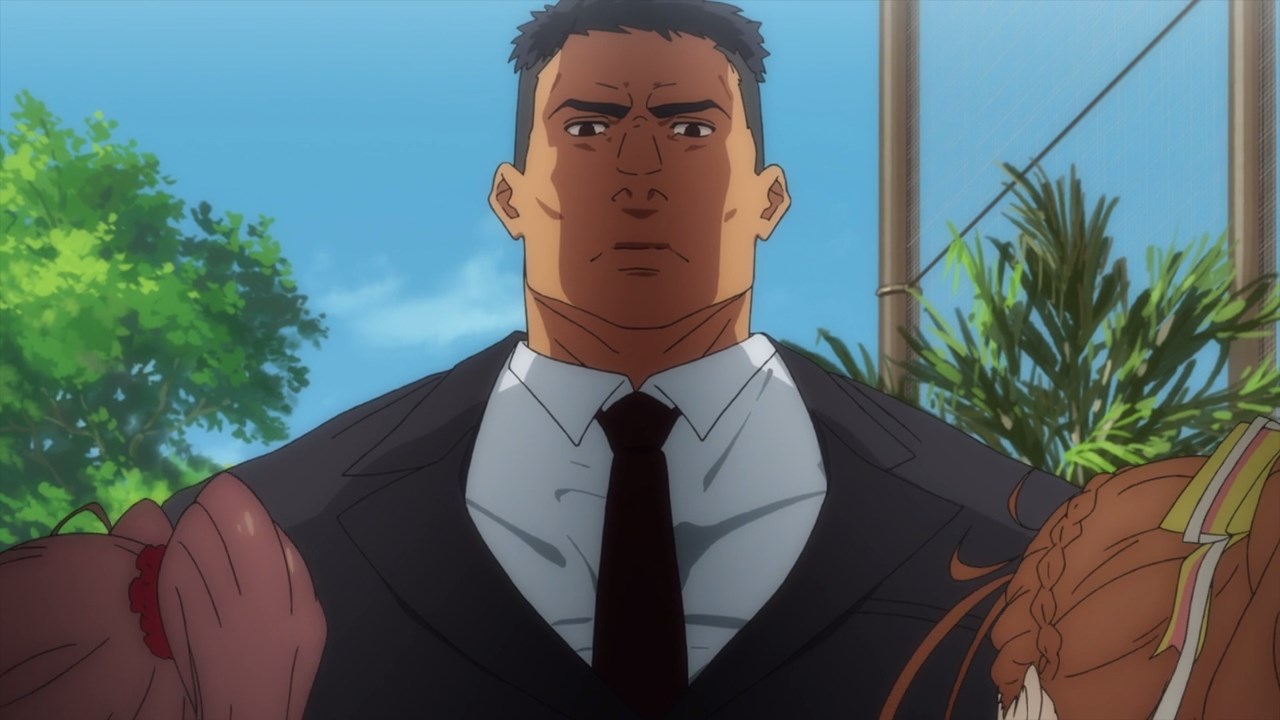 Oh, looks like this guy from Production GIP has appeared out of nowhere as Aoi Gouda explains to the girls that he’ll be the manager.

Also, Gouda-san told them that there’s no need for an audition because they’ll make their major debut right away.

Of course, I’m sketchy about Production GIP because why would they recruit girls without putting them into the audition phase? Heck, I feel that it’s a trap! 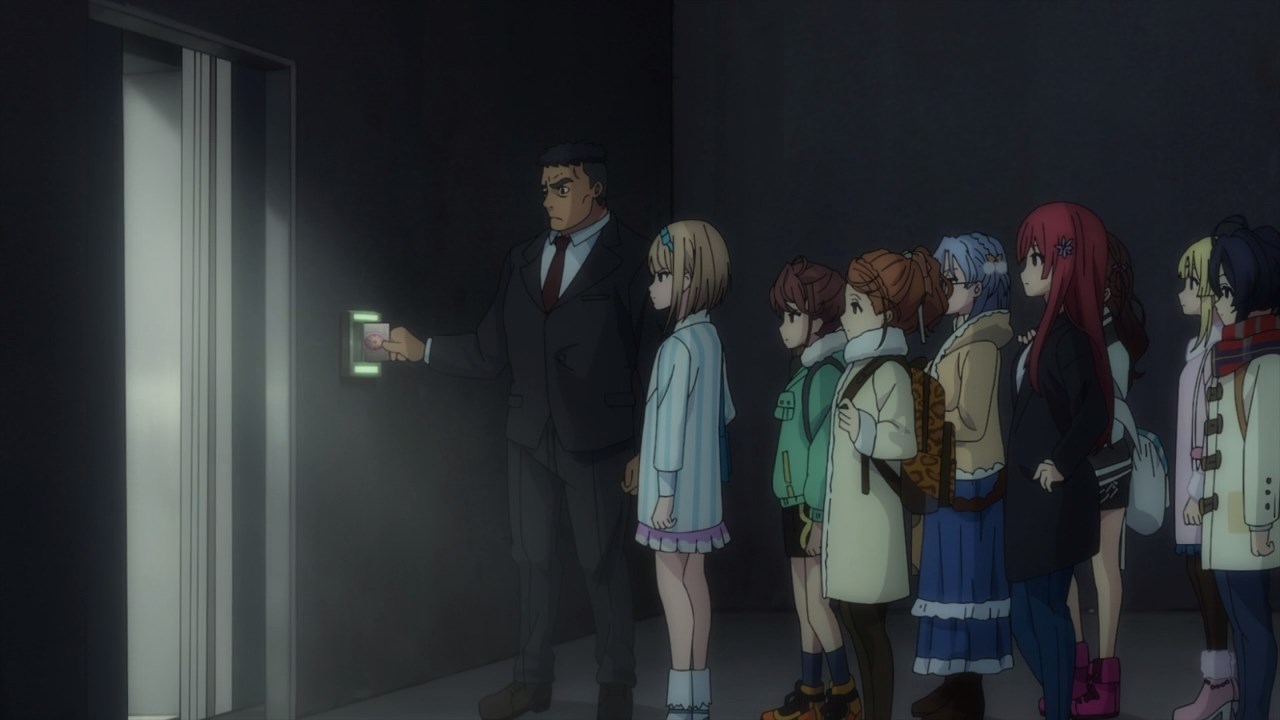 But to answer that question, Aoi Gouda lead those girls to a facility beneath the zoo. This facility is well-hidden that only staff members can enter there. 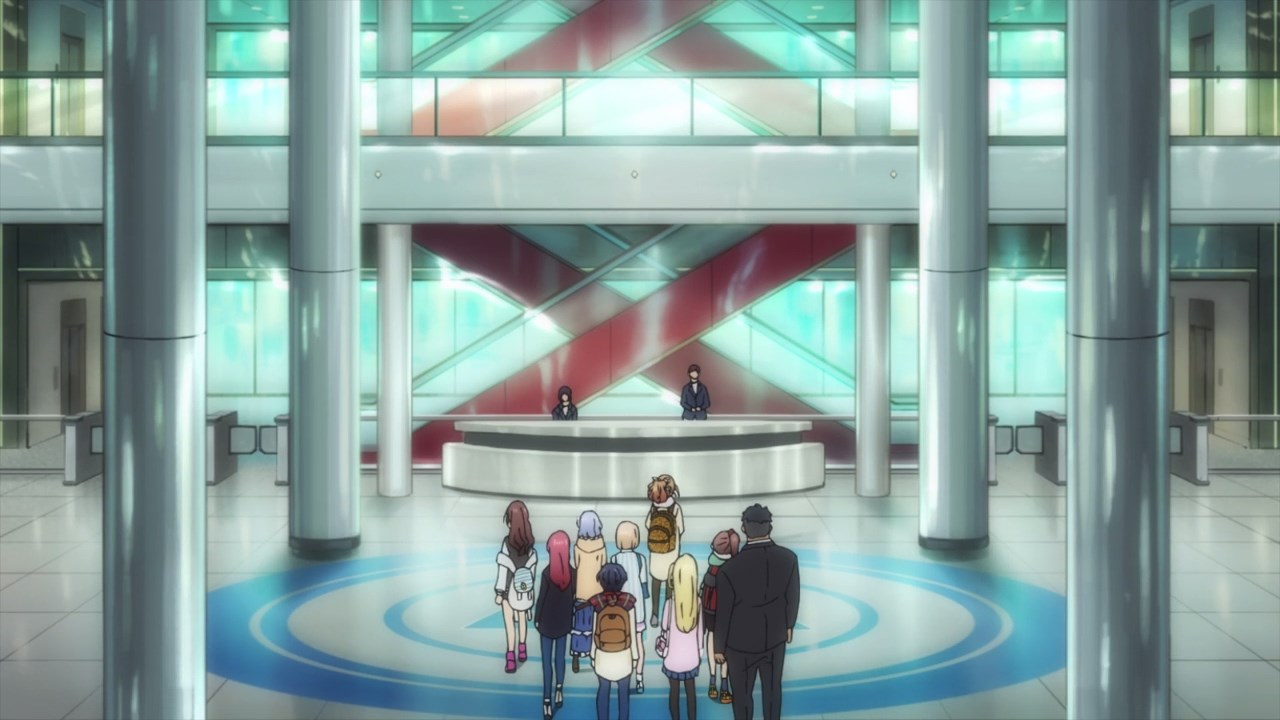 Anyways, this is Production GIP’s main office where this 7-storey underground facility has everything ranging from a recording studio to a gym.

First of all, how could they created this facility underneath a zoo? I bet that some rich tycoon made it to recruit girls to become idols. 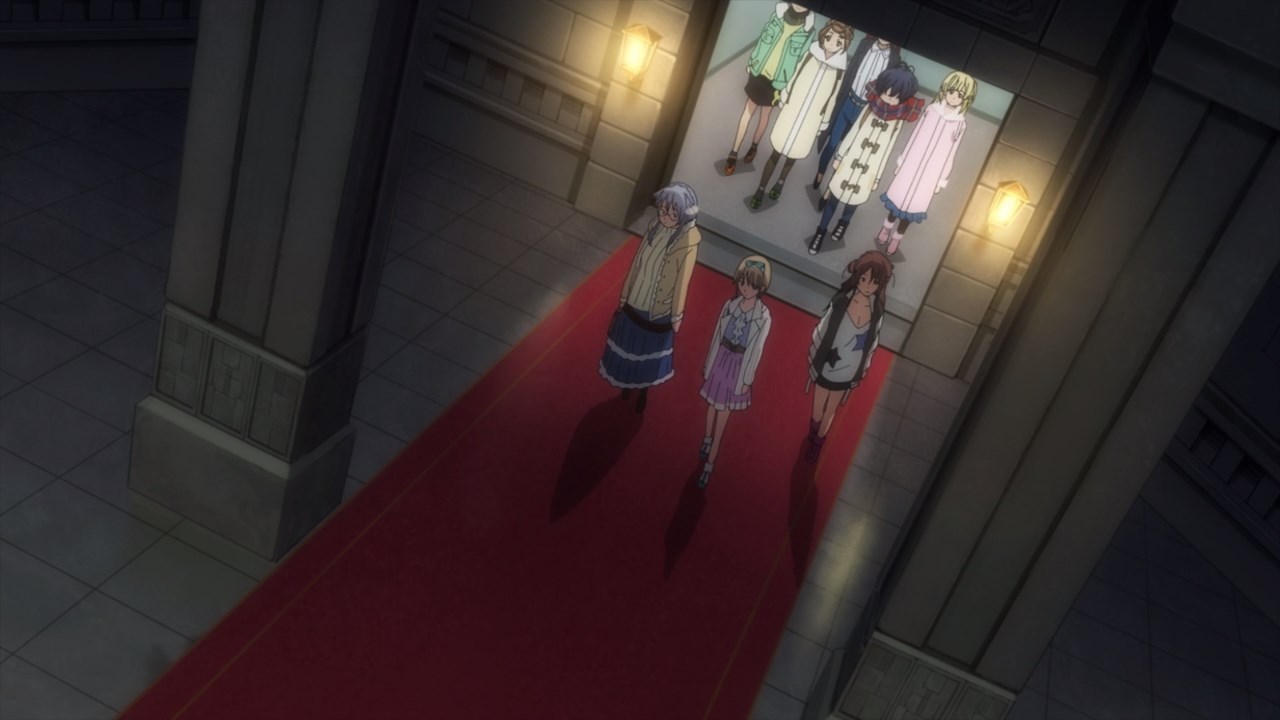 Of course, having a studio and a gym is nothing compared to the next room in which it’ll become their main residence. 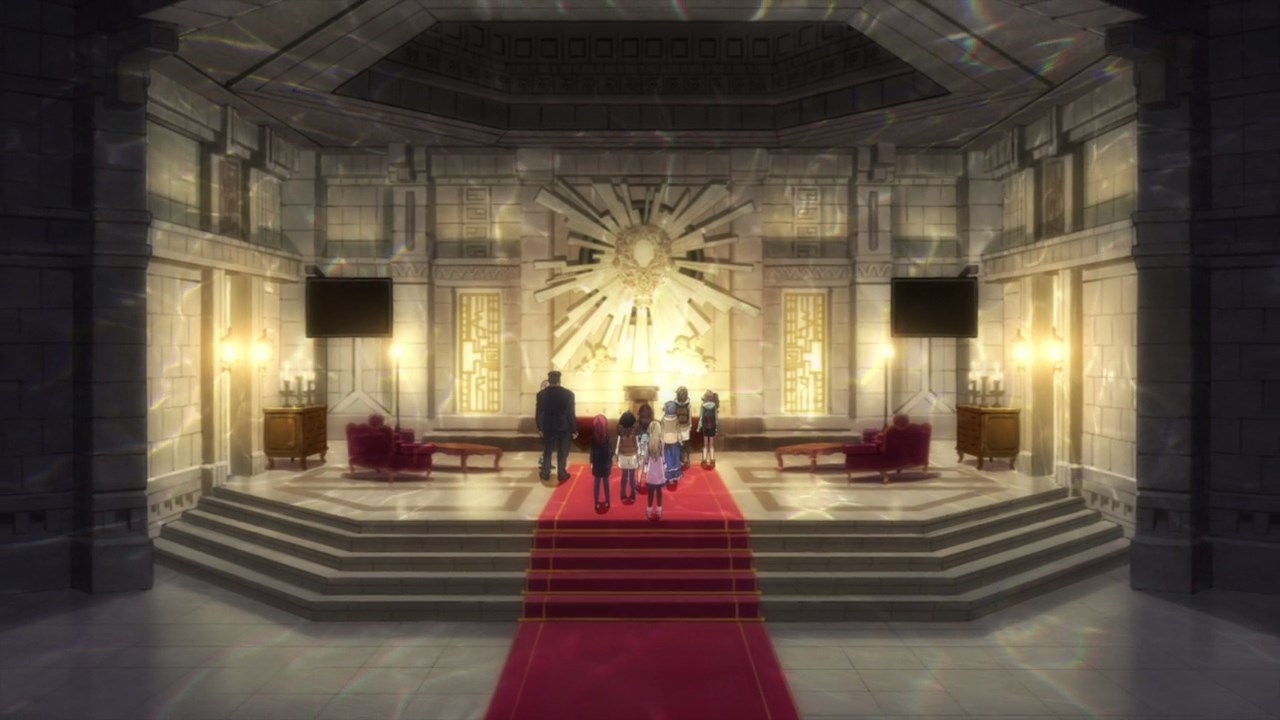 Anyways, this room houses The Wall and Aoi Gouda explains that it gives absolute command to the girls as well as the staff at Production GIP.

Come to think of it, I feel that The Wall has the soul of Yasushi Akimoto and that reminds me of Sensei-sensei from AKB0048. I wonder if The Wall will have a disemboweled voice when making a command? 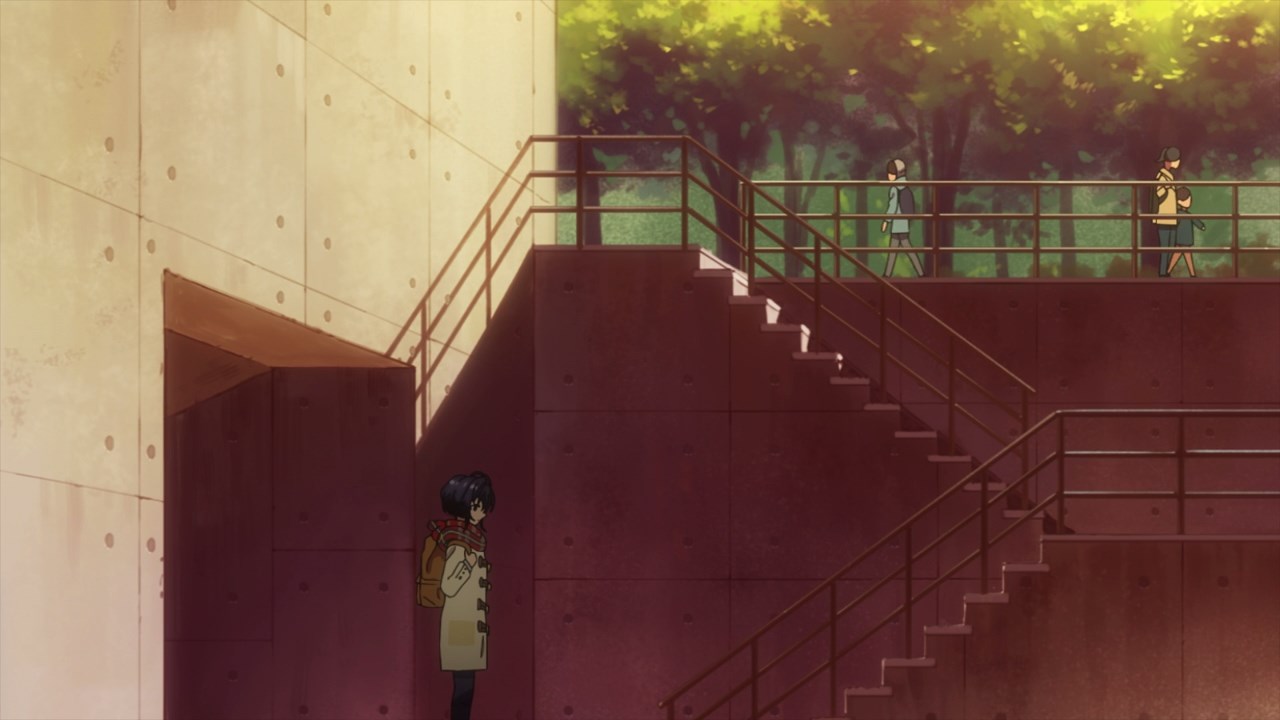 Unfortunately, one of the girls have decided not to join this new venture because it’s shady as hell and it’s not worth her time.

Said girl happened to be Miu Takigawa where it turns out that she has a distrust towards adults. Hmm, I wonder why Takigawa is like that ’cause this quiet girl has some issues? 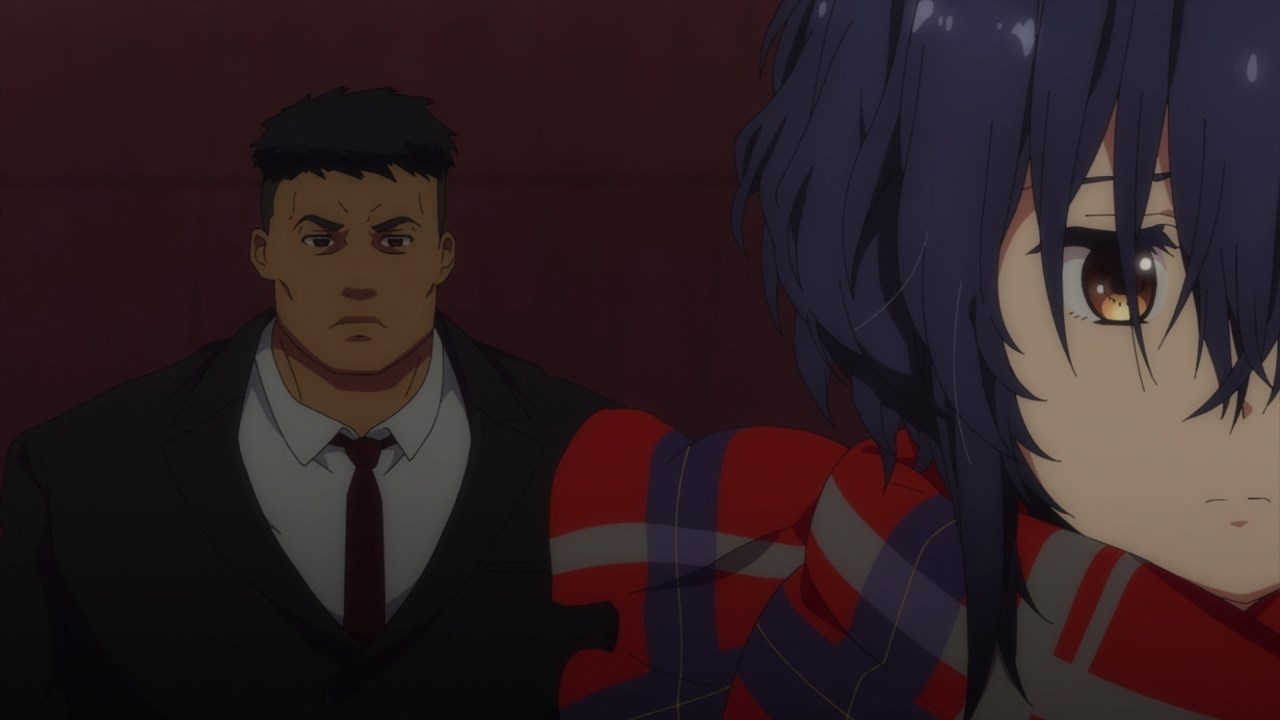 Of course, Aoi Gouda told Miu Takigawa that she’ll return to them any time… Well, that’s until December 24 in which she and the rest of the girls will make their debut.

Well then, I guess Takigawa will have some time to think about it before jumping in as an idol. 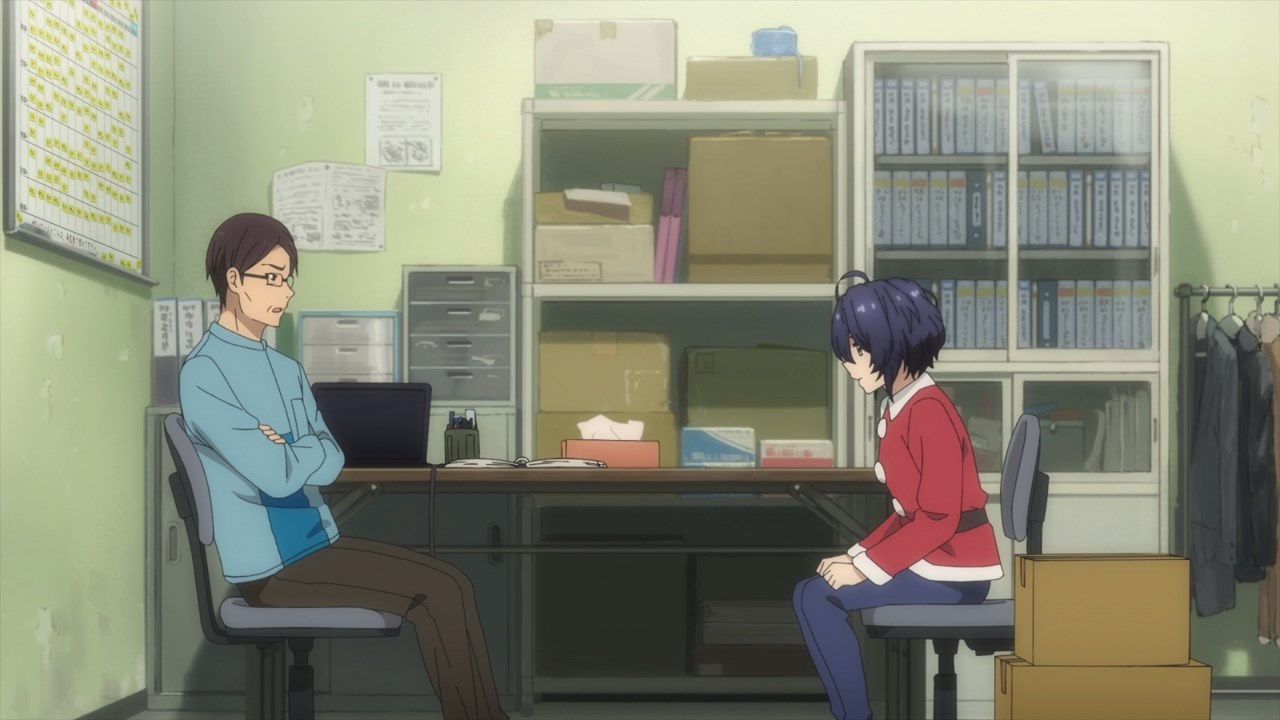 But then, something happened in her life as Miu got laid-off by her supervisor because of her unfriendliness to her fellow co-workers and the customers. 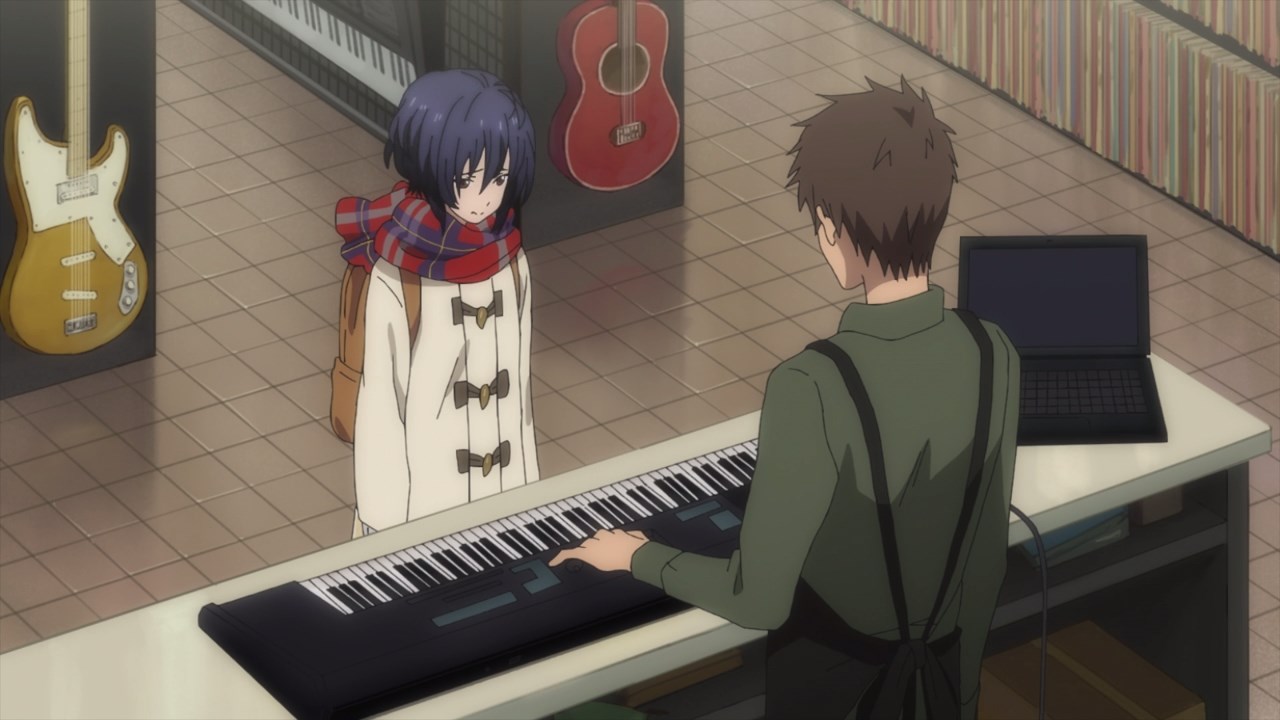 Not only that, but Takigawa is forced to sell her old keyboard since she doesn’t have money.

You know something, I’m starting to picture Miu Takigawa’s life where she wants to be a musician, but her dreams were put on hold due to financial reasons. Hence Miu worked at a convenience store. 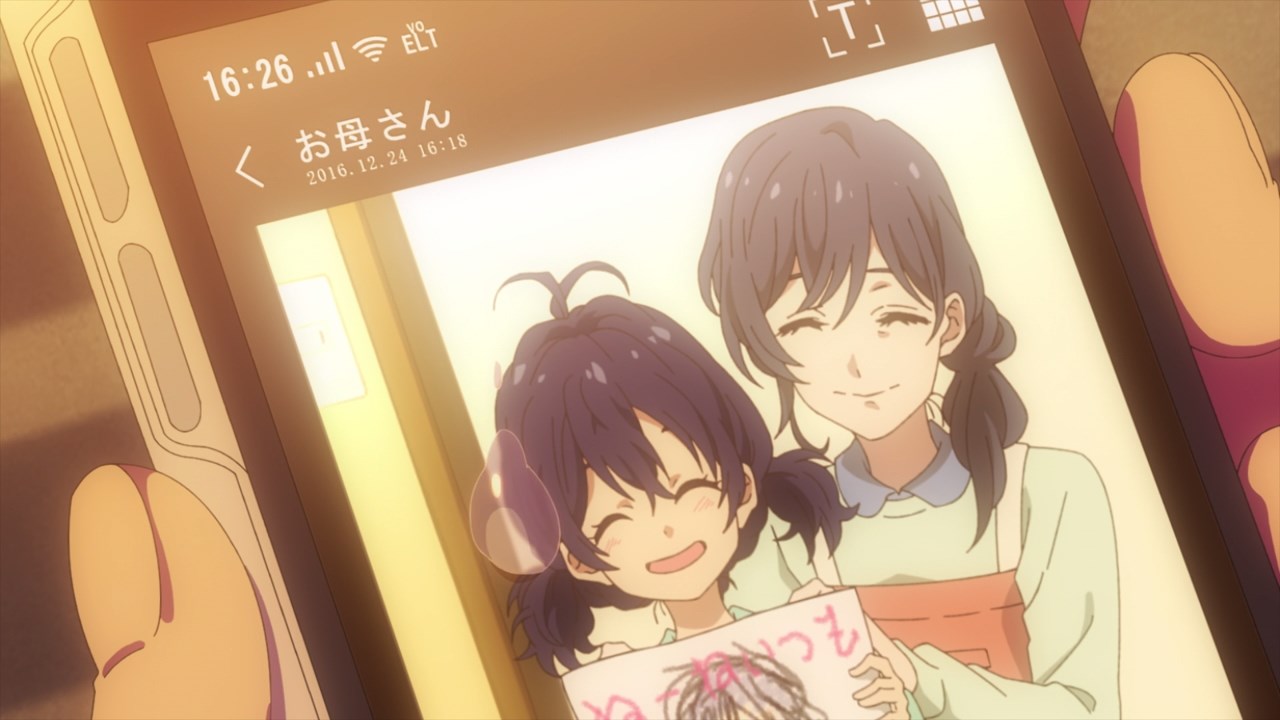 And here’s the thing though because the reason why Miu Takigawa is working hard at the convenience store is because of her mother and little sister. 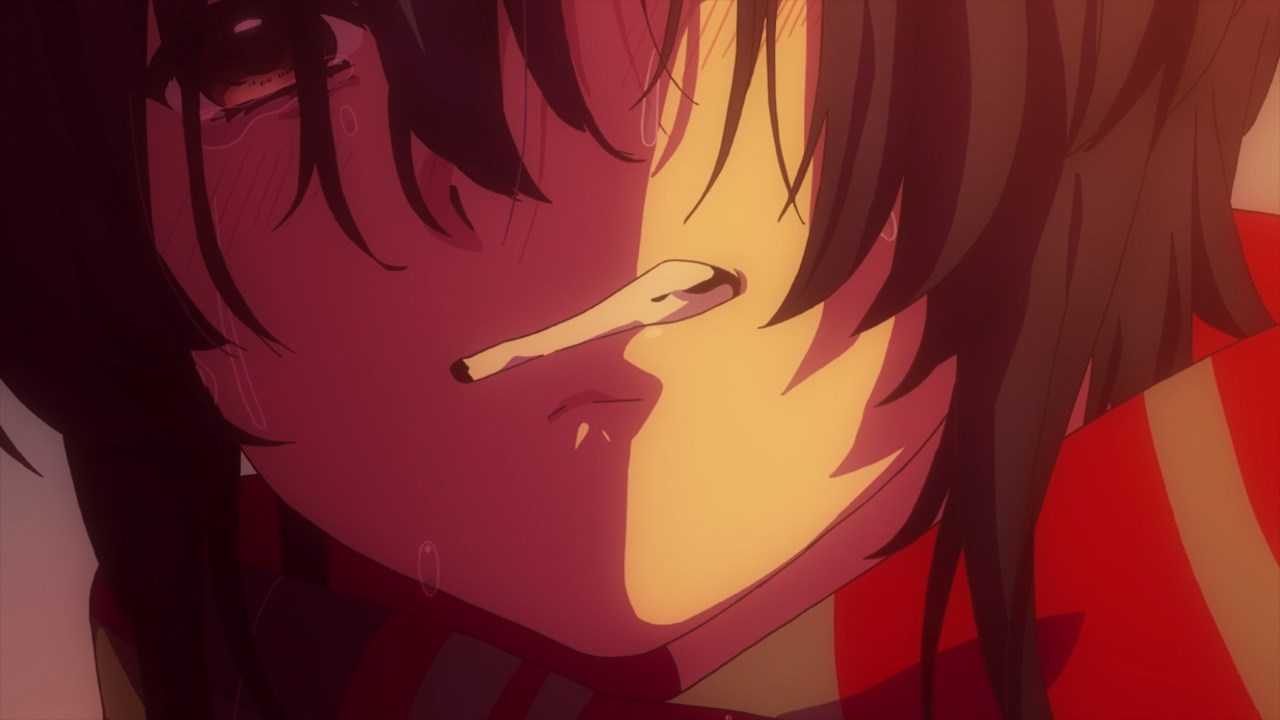 But now that she’s out of work, it looks like Miu Takigawa is desperate to find a work to help her family. I mean, her emotion shows that! 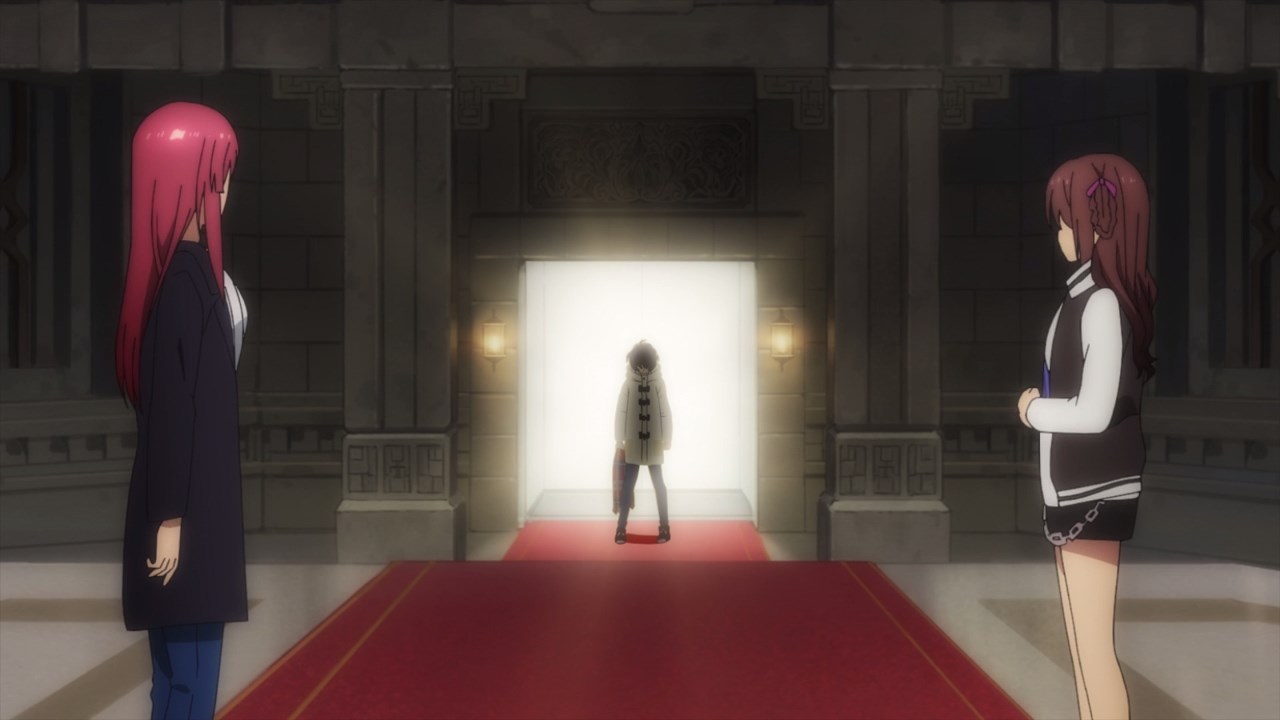 Anyways, looks like Miu Takigawa went back to Production GIP’s main office where she wants to become an idol. 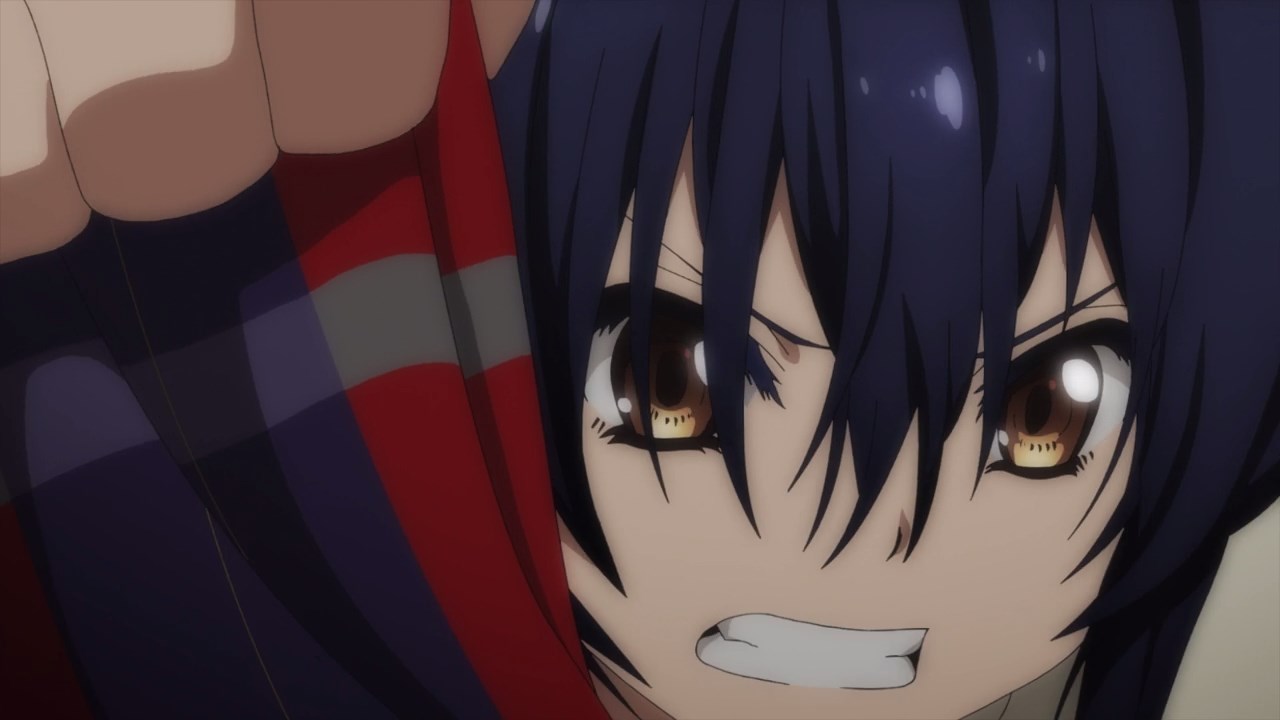 And while Takigawa still detested adults, she doesn’t want to be contented as an idol as Miu wants to be the world’s number one idol!

Man, all I can say is good luck to her, but I feel that Miu Takigawa needs to soften up a bit and befriend other idols. C’mon, they need to work together to become the number one idol group! 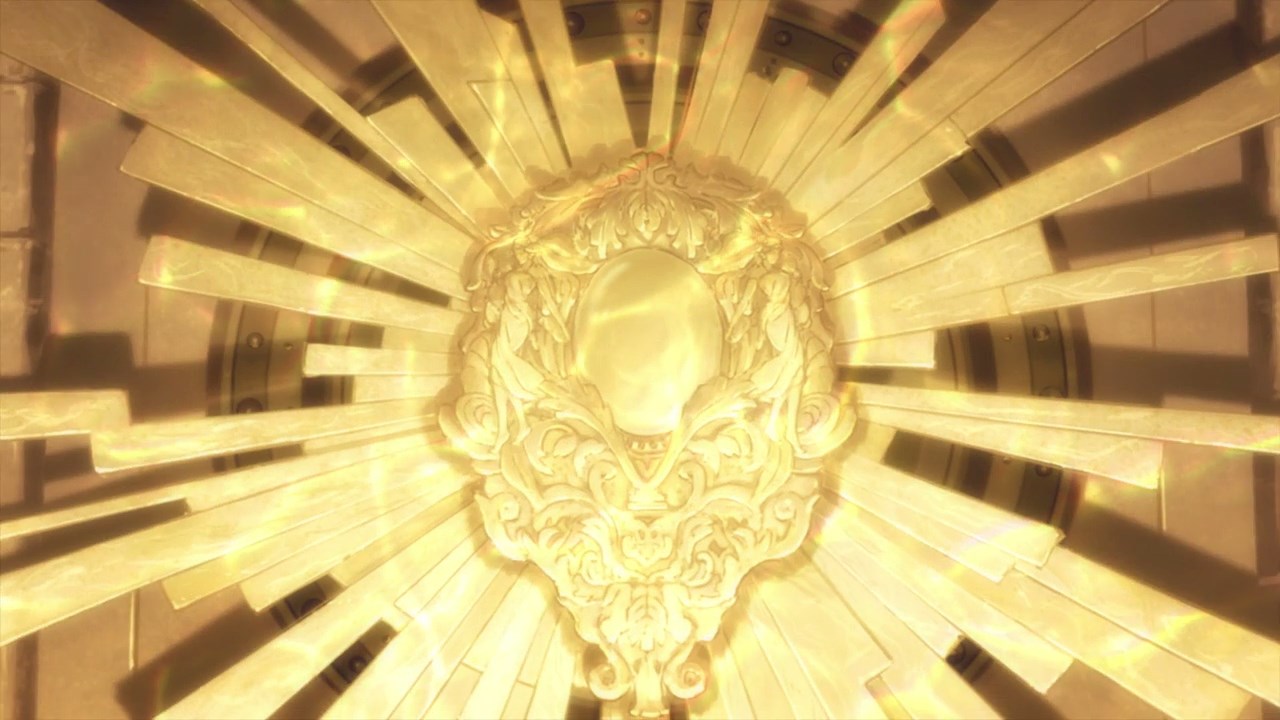 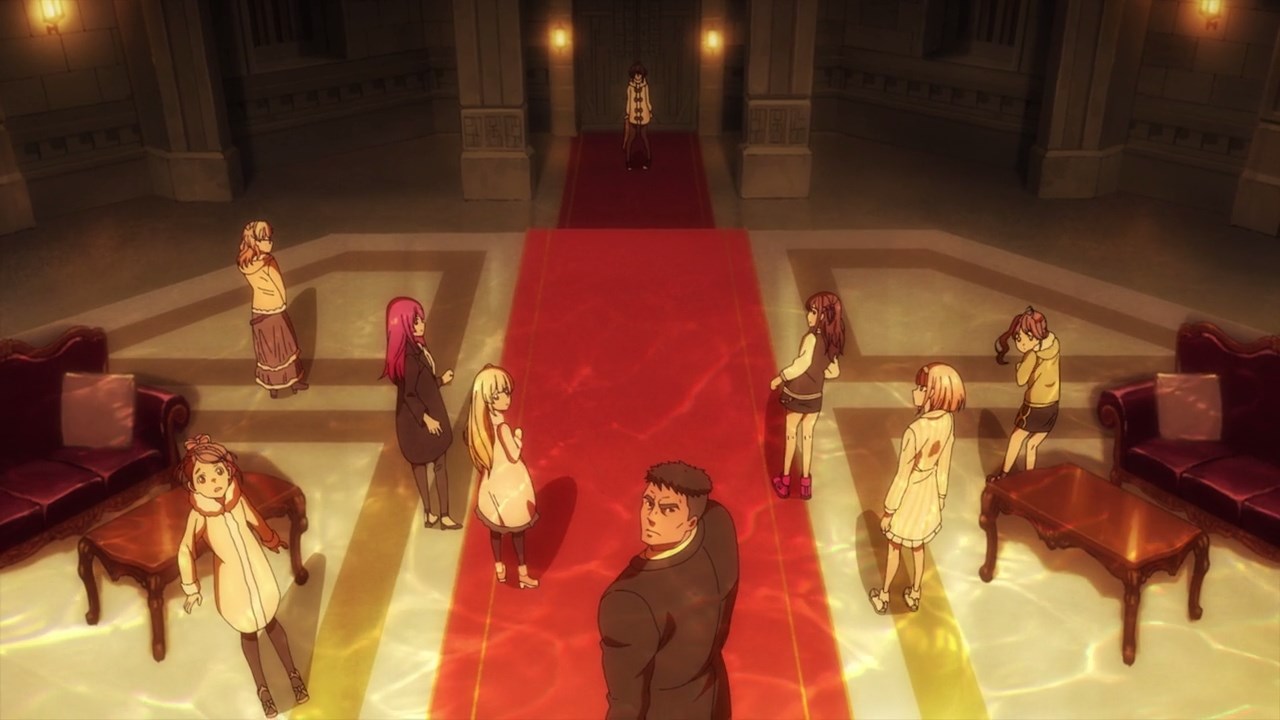 But thanks to Takigawa’s declaration, it appears that The Wall made a reaction as it now issues its first command. Oh boy, I can’t wait to hear some voices from The Wall. 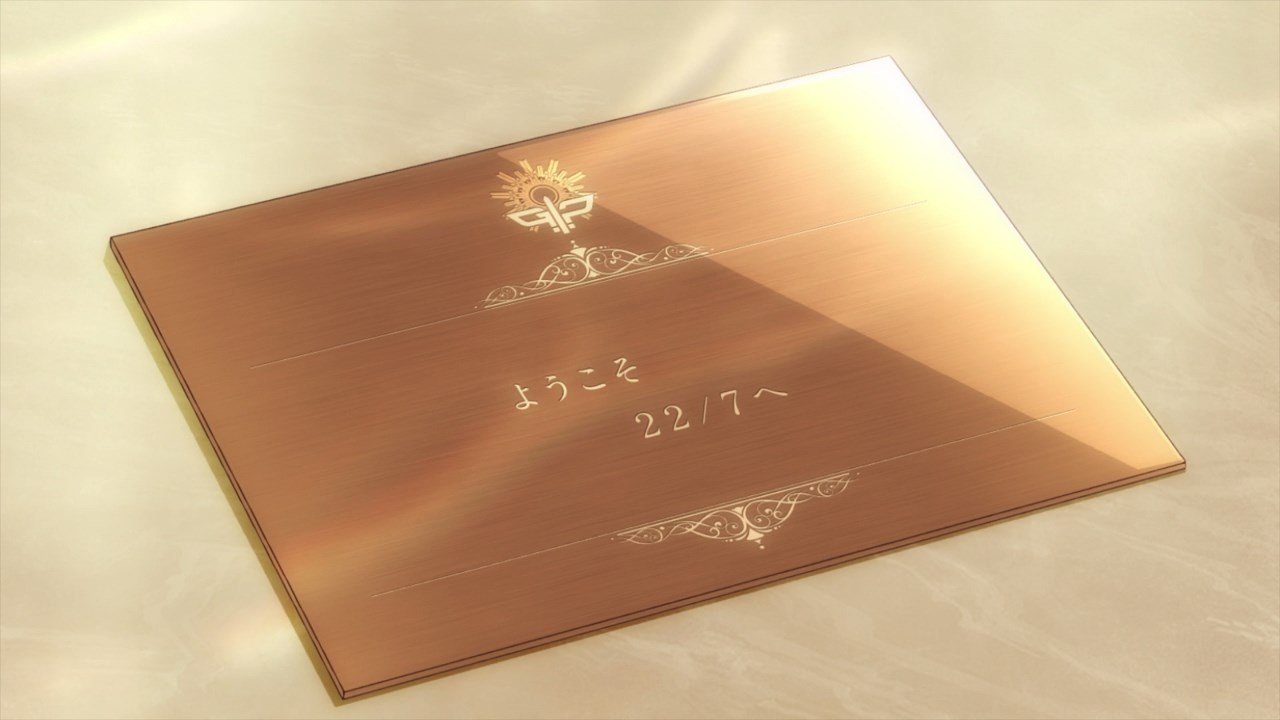 Then again, turns out that The Wall issues commands by stamping its thoughts onto a copper plaque. However, instead of a command, The Wall says “Welcome to 22/7!” towards the girls in which it welcomes them to the world of idols.

Well, all I can say is that I’ve witness the weirdest introductory episode as the girls will have to follow commands from an AI. Then again, I wonder what’s gonna happen to Miu Takigawa and the rest? I guess I’ll find out on the next episode of Nanabun no Nijyuuni!