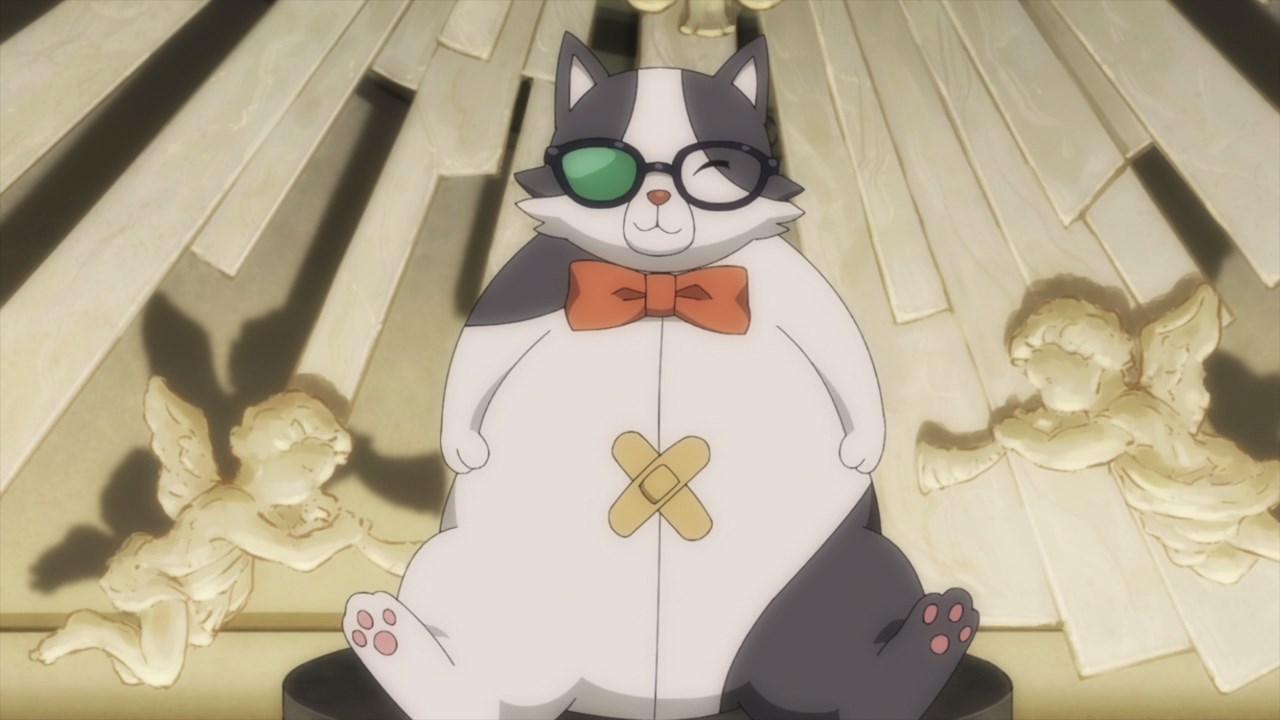 We have some unexpected news on the 3rd episode as The Wall has transformed into The Cat! 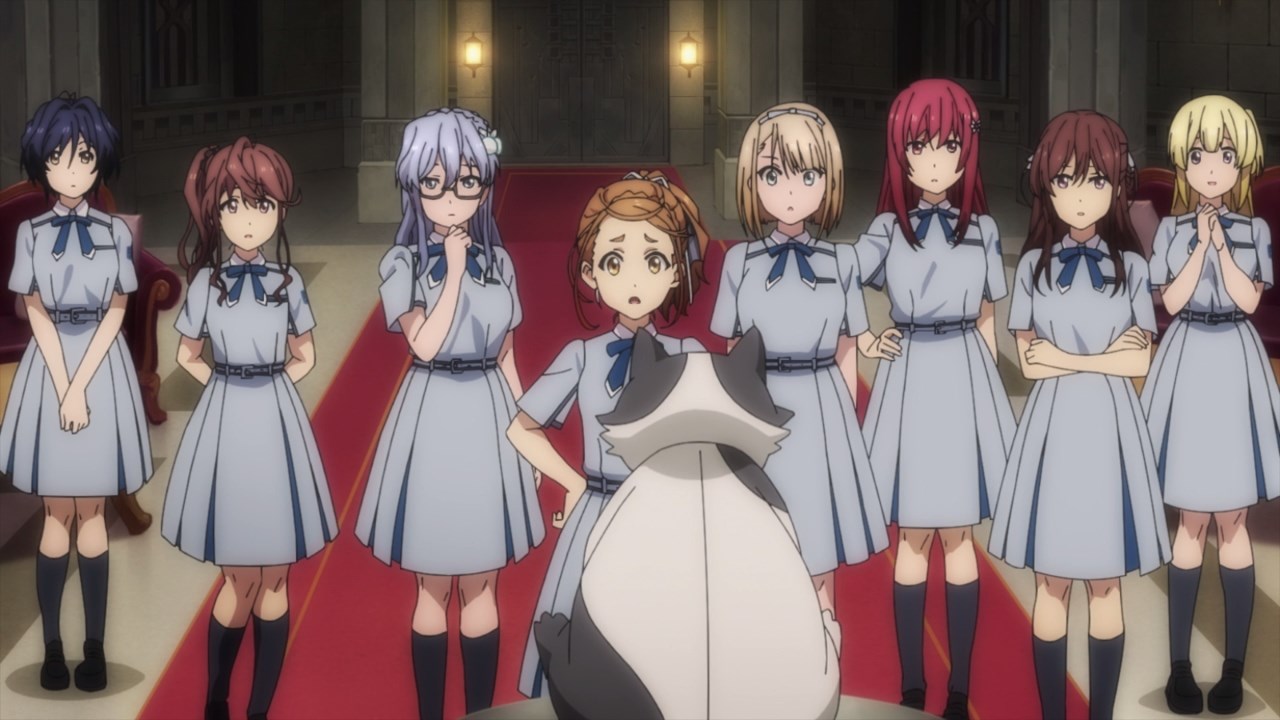 Well actually, Miyako Kouno put a cat doll as some sort of an avatar because facing The Wall is very intimidating to her and the rest of the girls.

So yeah, The Wall has become The Cat but that doesn’t stop it from issuing orders that are absolute and sometimes unpredictable. 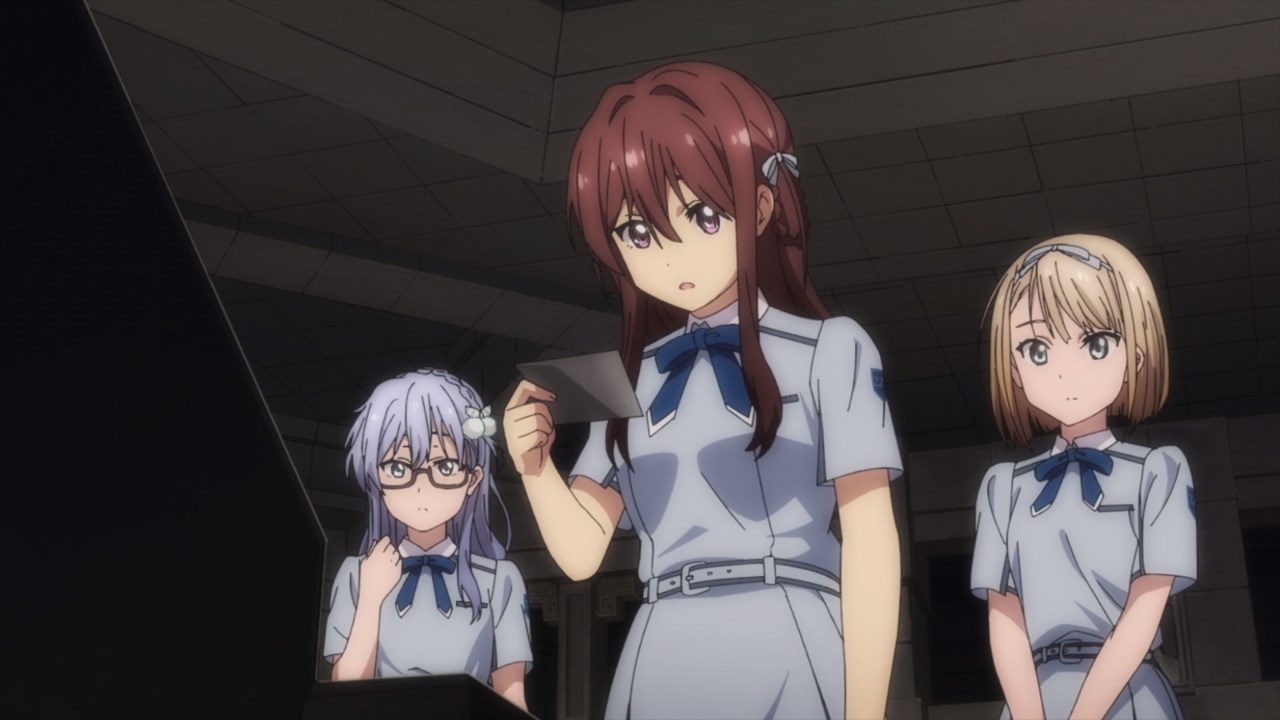 Speaking of The Wall’s (or The Cat’s) orders, looks like it gave one to the girls and Reika Satou couldn’t believe that The Wall gave something generous this time, unlike the previous one where it just ordered them to take the auditions on a short notice. 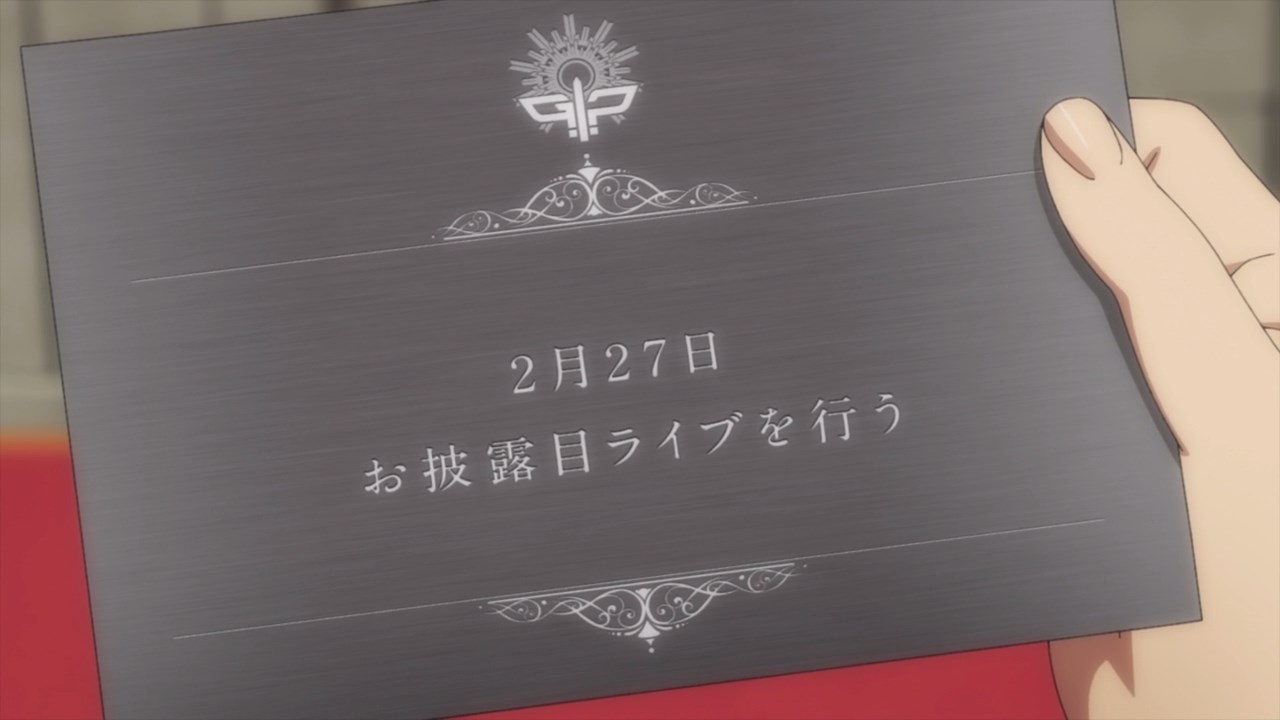 Anyways, The Wall ordered Nanabun no Nijyuuni to perform on February 27. I’m not sure if the series takes place in December or January, but it’s plenty of time for the girls to prepare themselves. 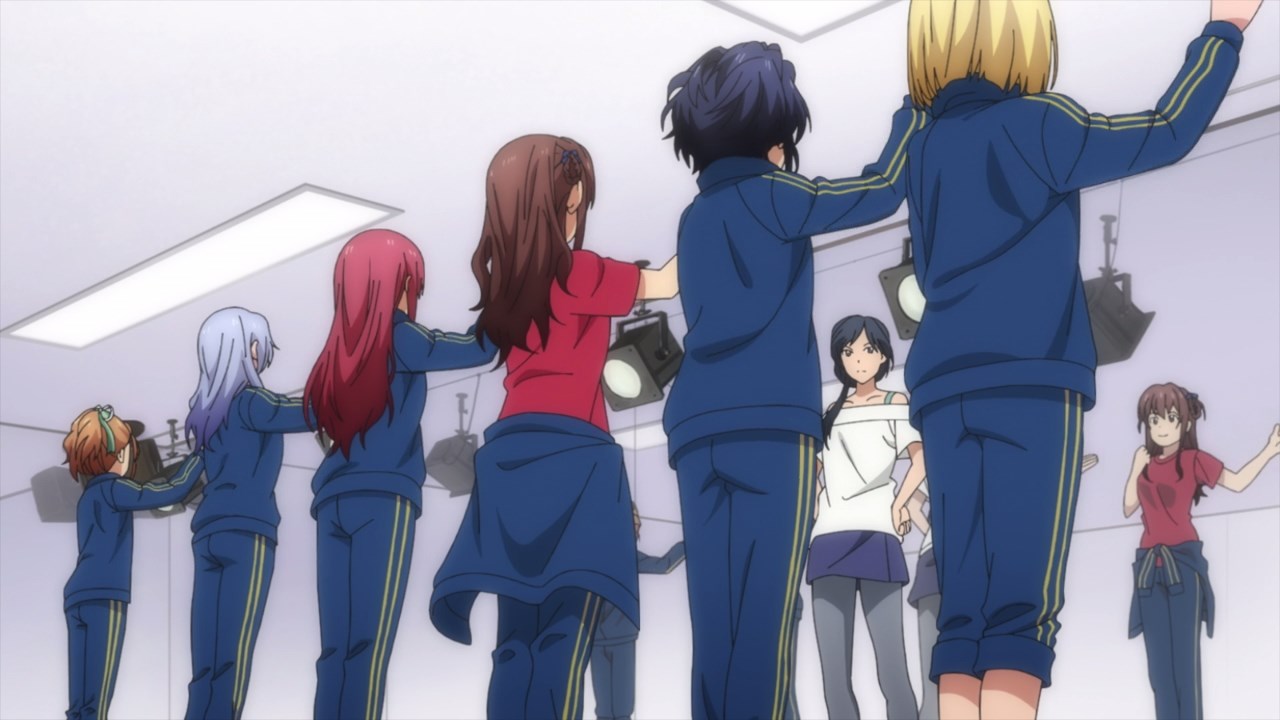 Of course, there’s Miu Takigawa in which she needs to catch up with the rest of the girls since she mostly missed the dancing and singing lessons. C’mon, Miu has a long stair to climb since she’s the center after all! 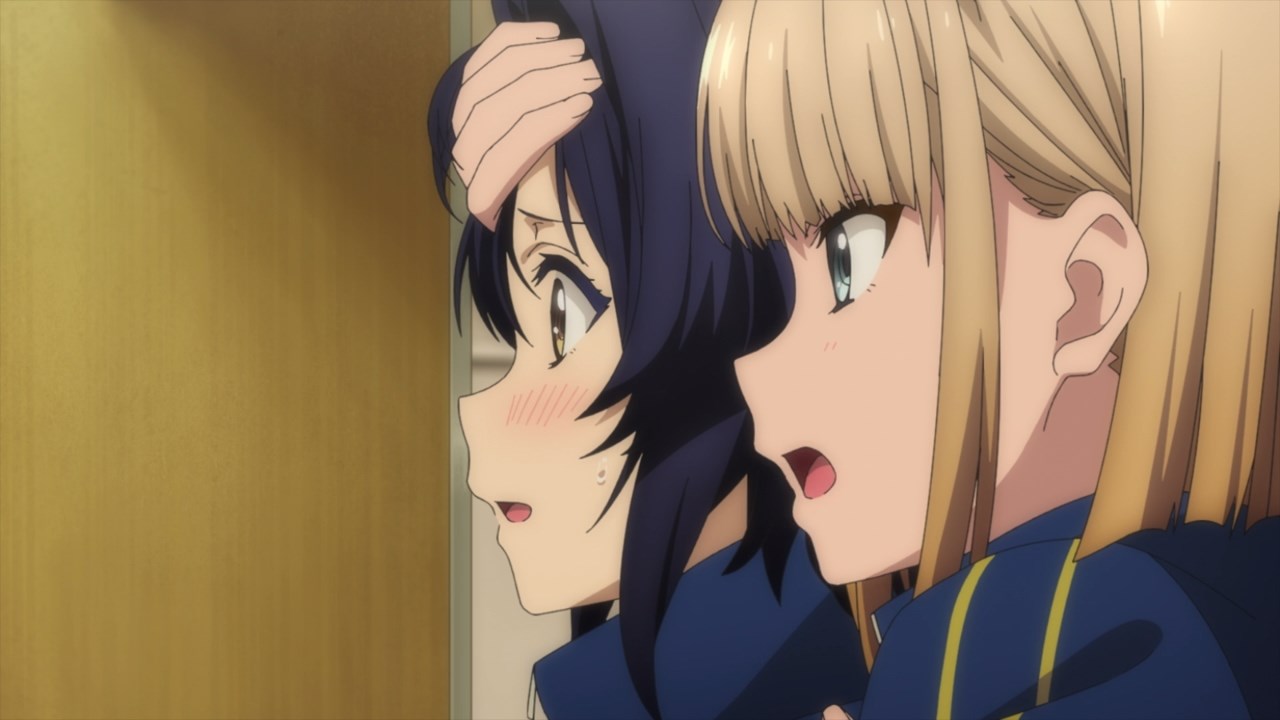 Meanwhile, here’s Nicole Saitou where she told Miu not to block her face with her hairbangs. Also, Saitou told Takigawa to express more since she’s the main focus after all!

Of course, it’s hard for Miu to adjust since she’s always shy. 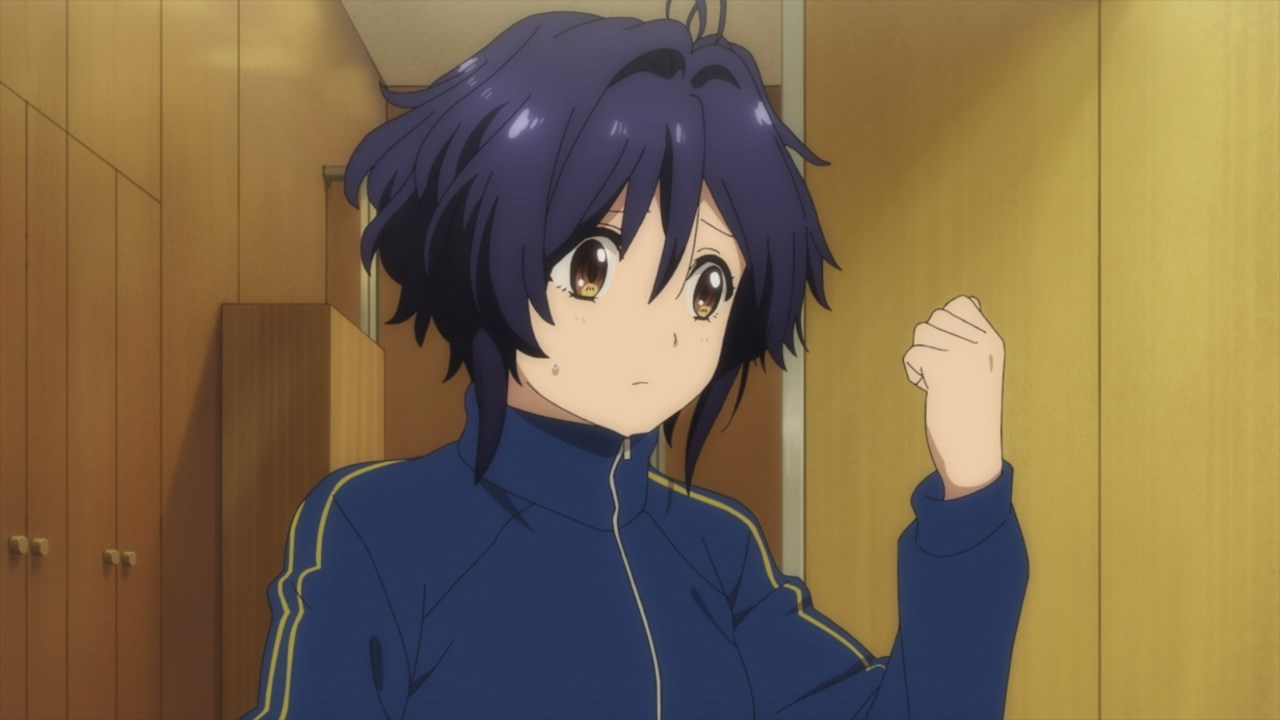 Oh and as for her bangs, I think Nicole gave something to Miu to fix that. 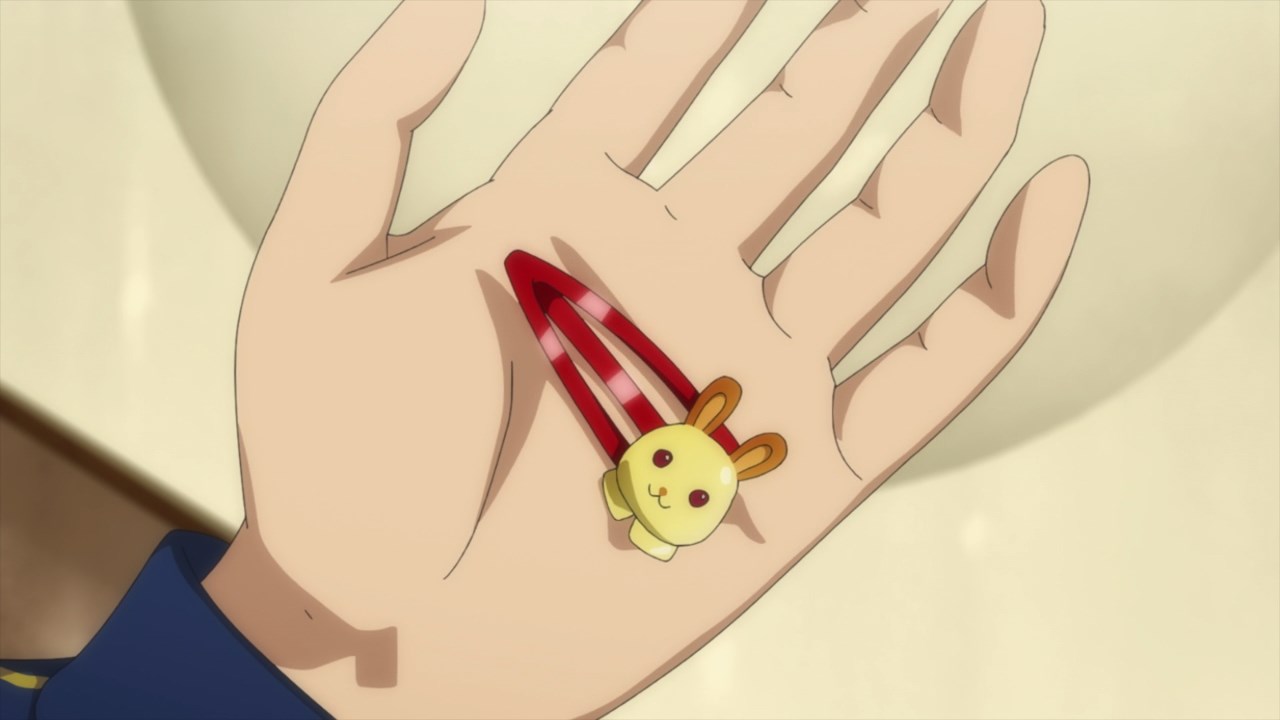 It’s a hairpin with a cute bunny in it. Then again, Miu will use it when she wants to show her face. Maybe in the concert? Not sure about that! 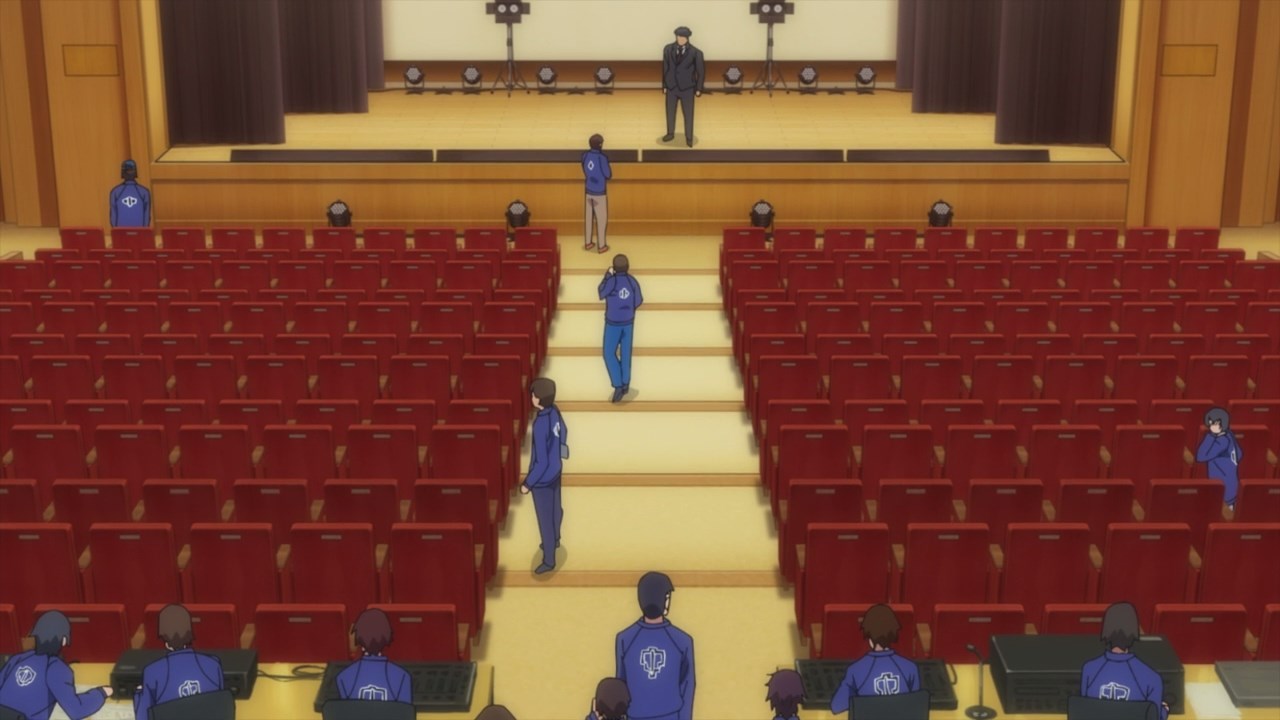 Anyways, it’s time for the concert as 22/7 is ready to perform in front of the audience and while they’re nervous, at least they learned a lot since The Wall gave them lots of time to prepare. 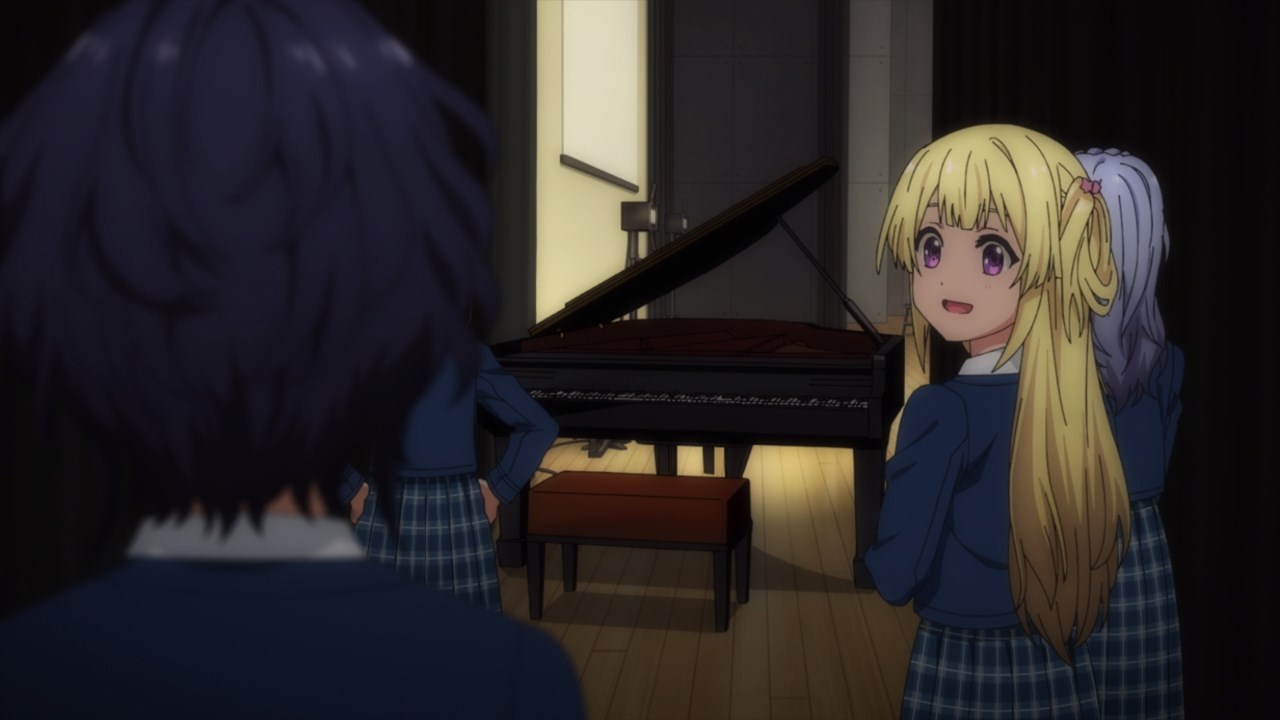 Oh yeah, this venue has a piano as Sakura Fujima pointed out. Come to think of it, I feel that it’s gonna be important later on… 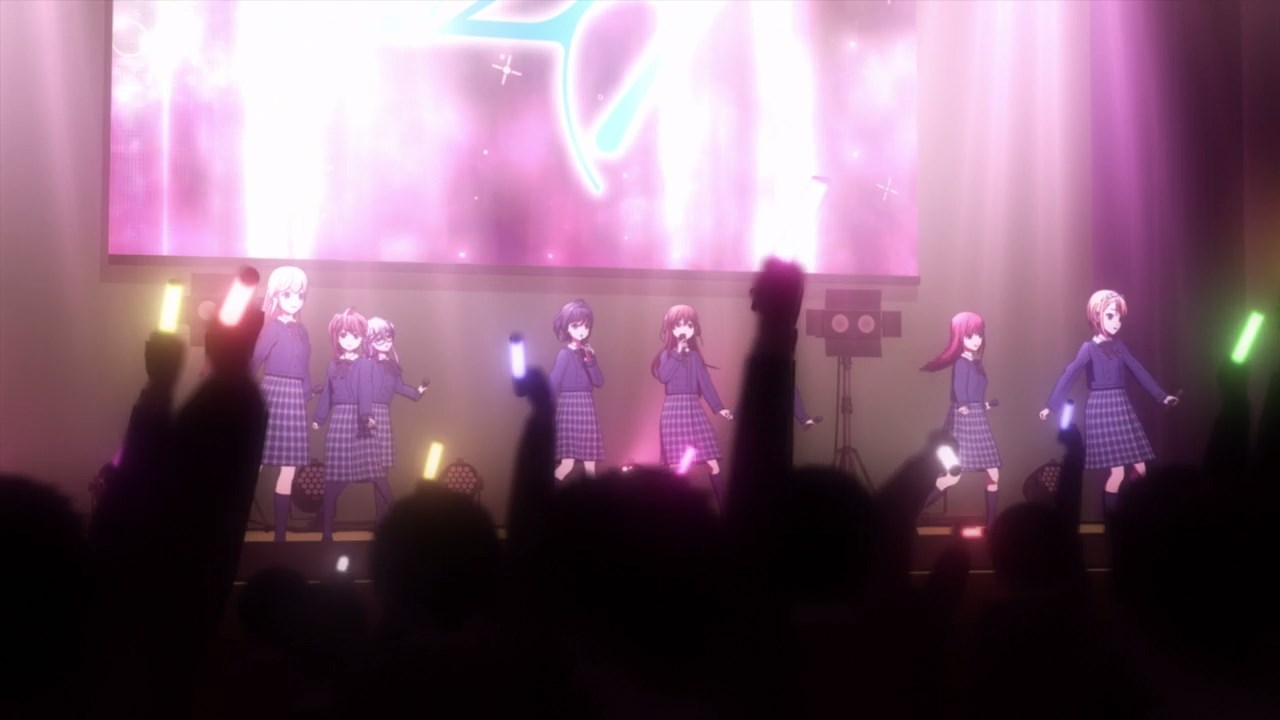 For now, it’s time to start the concert as 22/7 performed “Shampoo no Nioi ga Shita” and they did great so far. 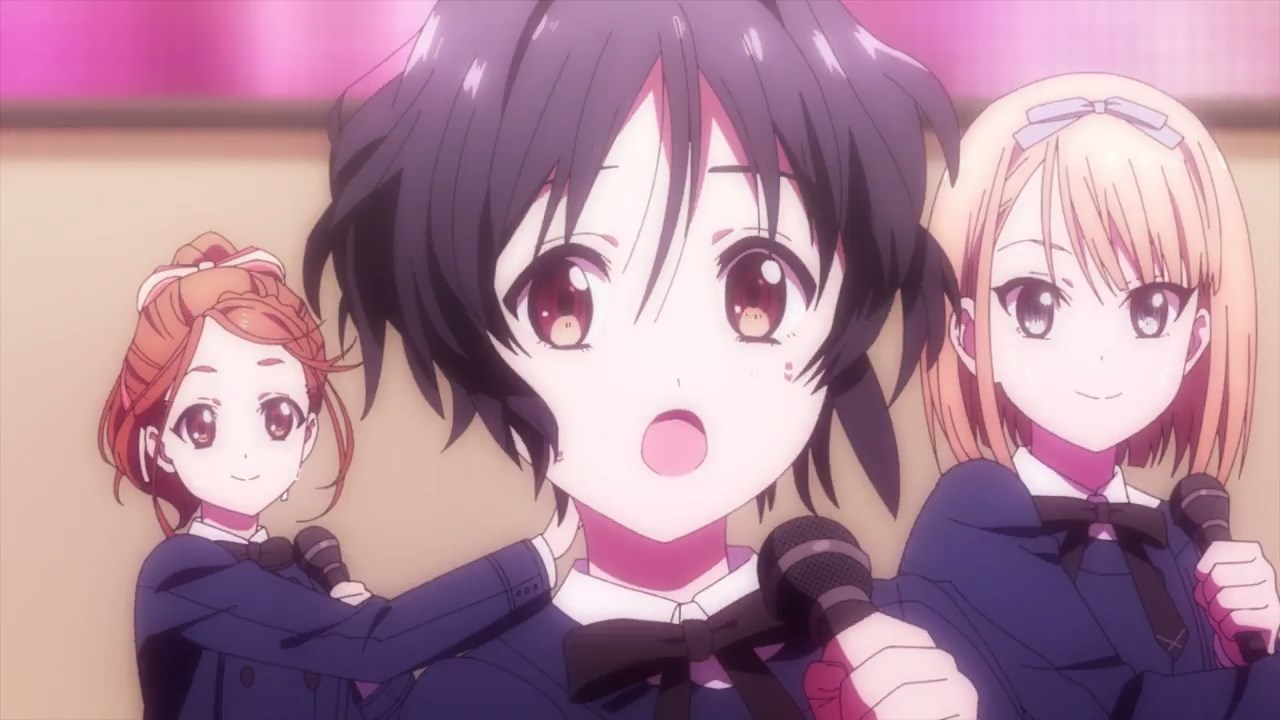 Heck, even Miu Takigawa did her best to express herself on stage despite missing out a lot of lessons. Well then, I feel that the concert will go smoothly as planned. 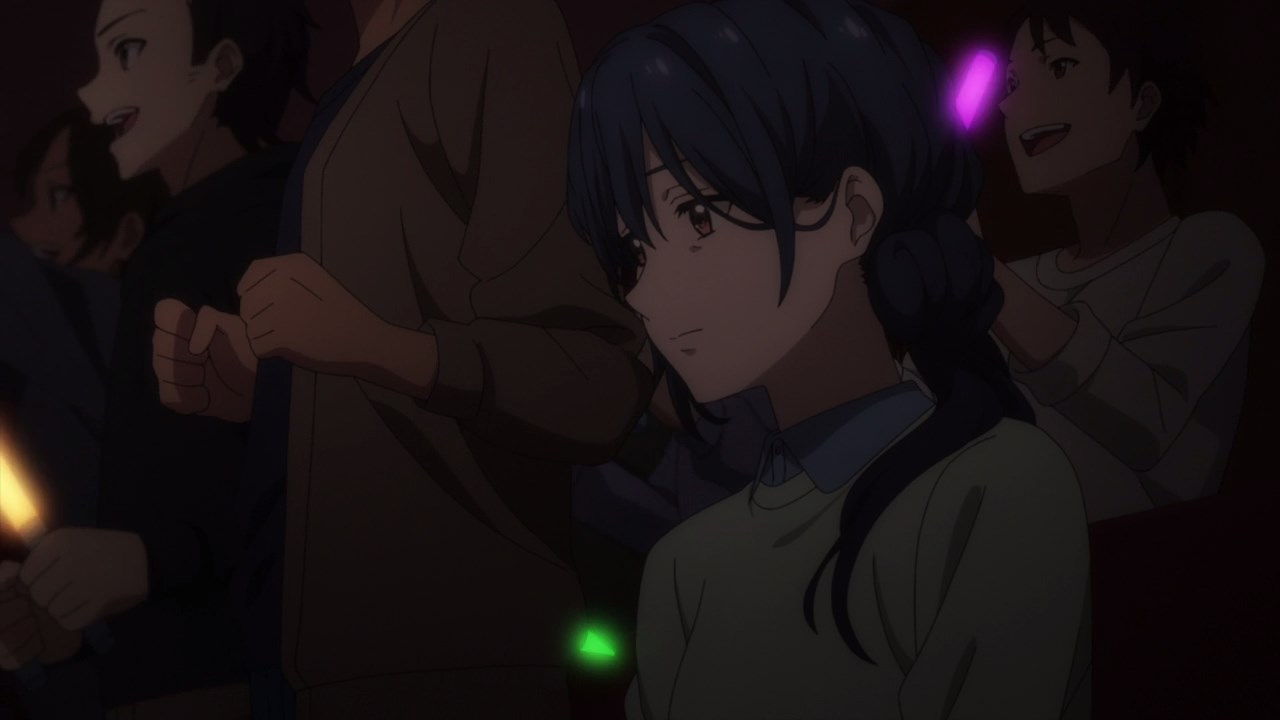 But then again, there’s Miu’s mother in which she got invited by Production GIP to see her daughter perform as an idol. 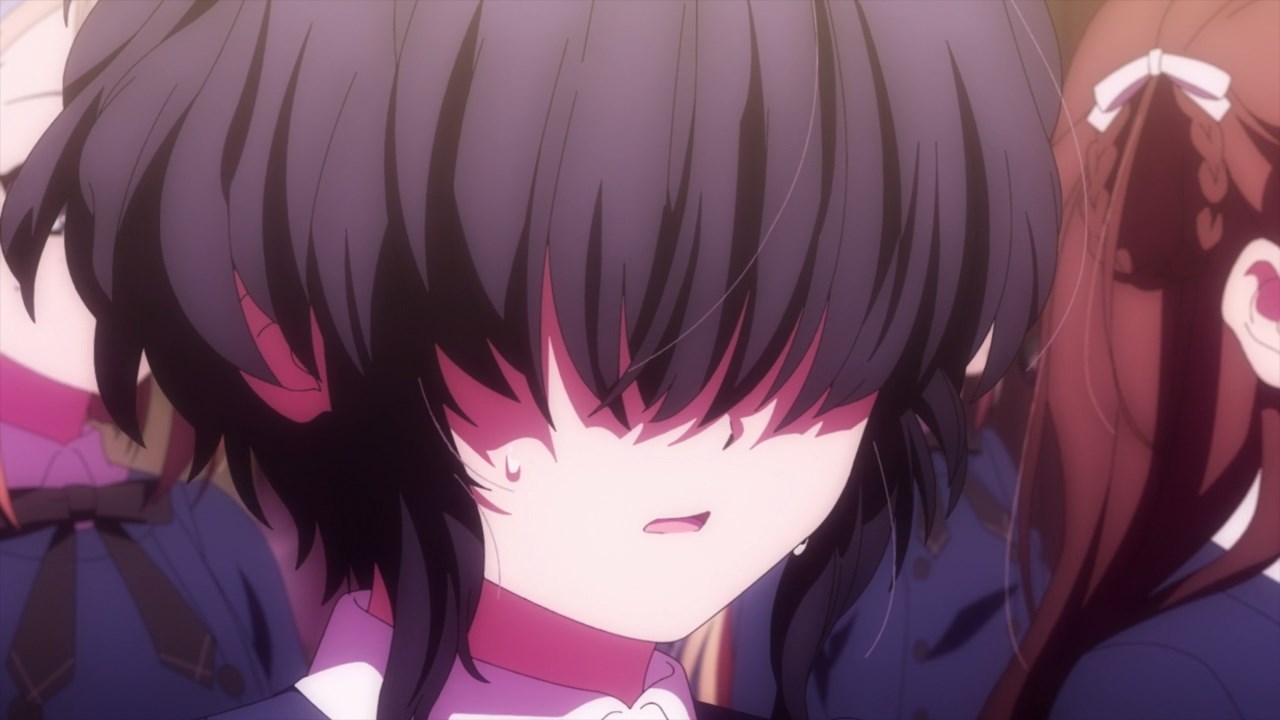 And when Miu saw her mother at the crowd, she goes back to her usual shy and reserved personality, as if she’s ashamed of being an idol in front of her parent. 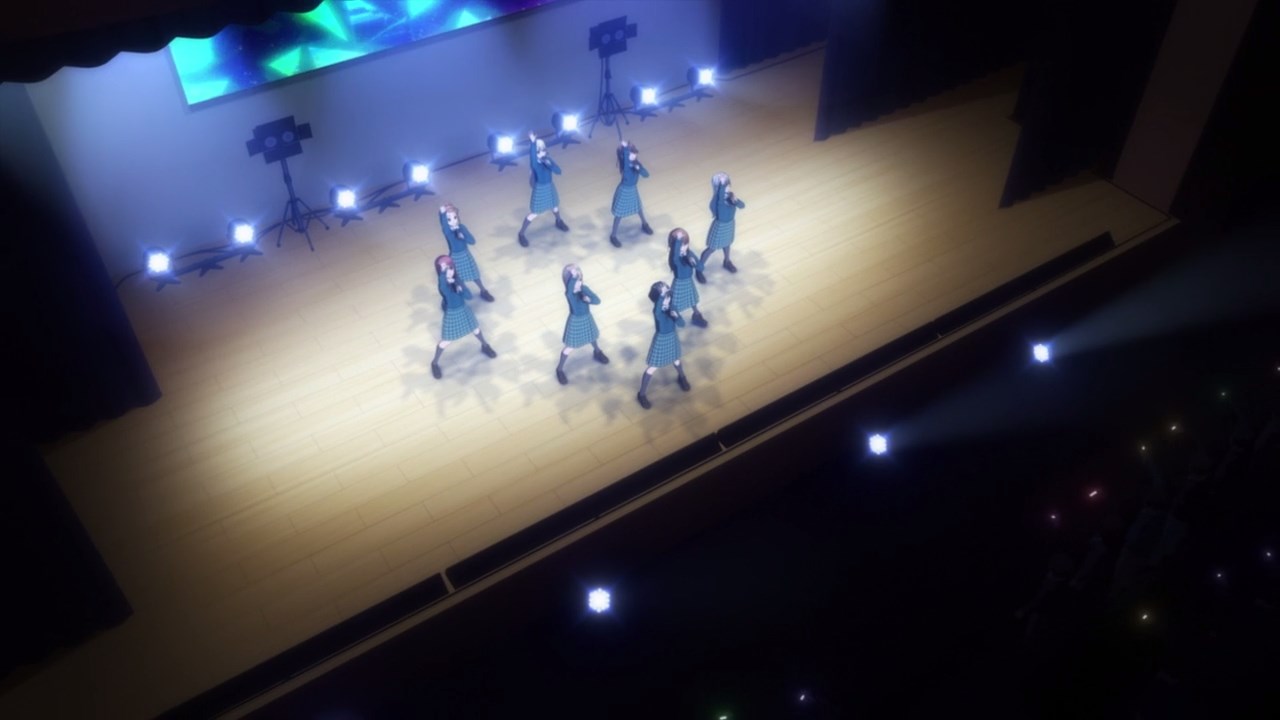 And do you think that Miu Takigawa having a stage fright is bad? It gets worse when the sound system got a glitch during 22/7’s second song “Boku wa Sonzai Shiteinakatta”. 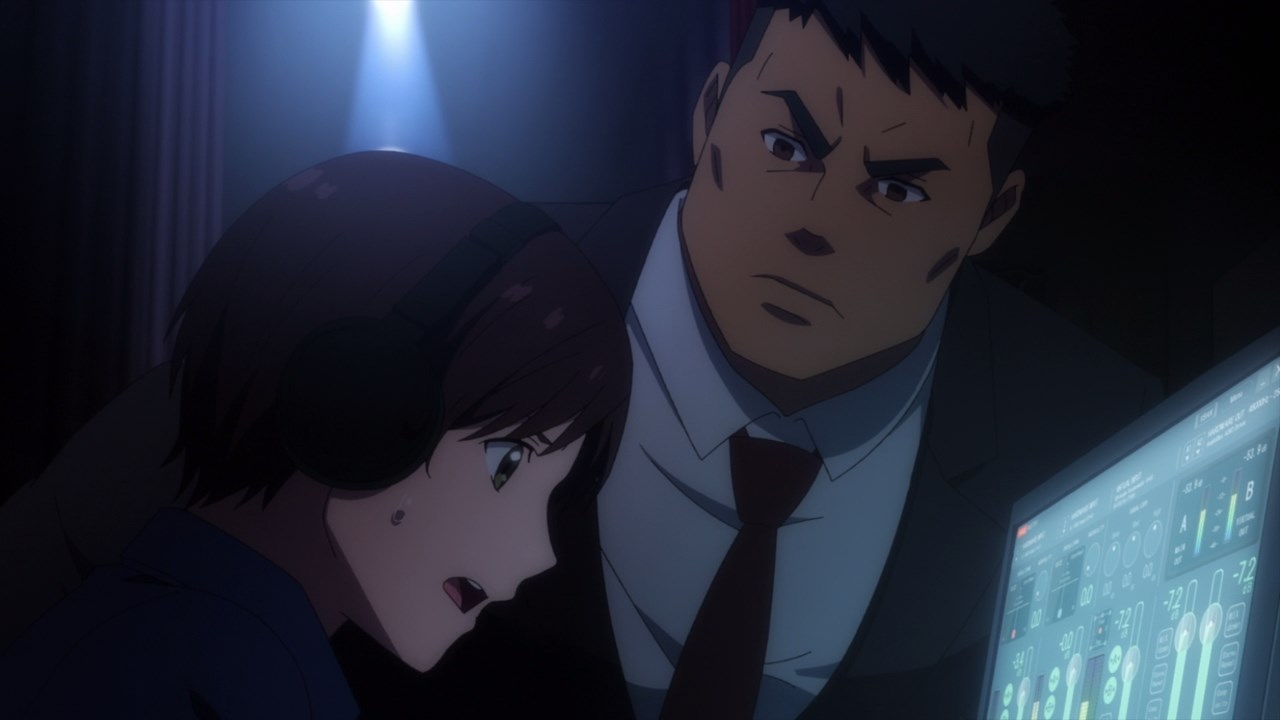 Heck, it’s so bad that the staff told Aoi Gouda that they’ll have no choice but to cancel the concert because it’ll take a week for the sound system to be fixed.

Yeah, Nanabun no Nijyuuni’s first concert will end in a whimper! 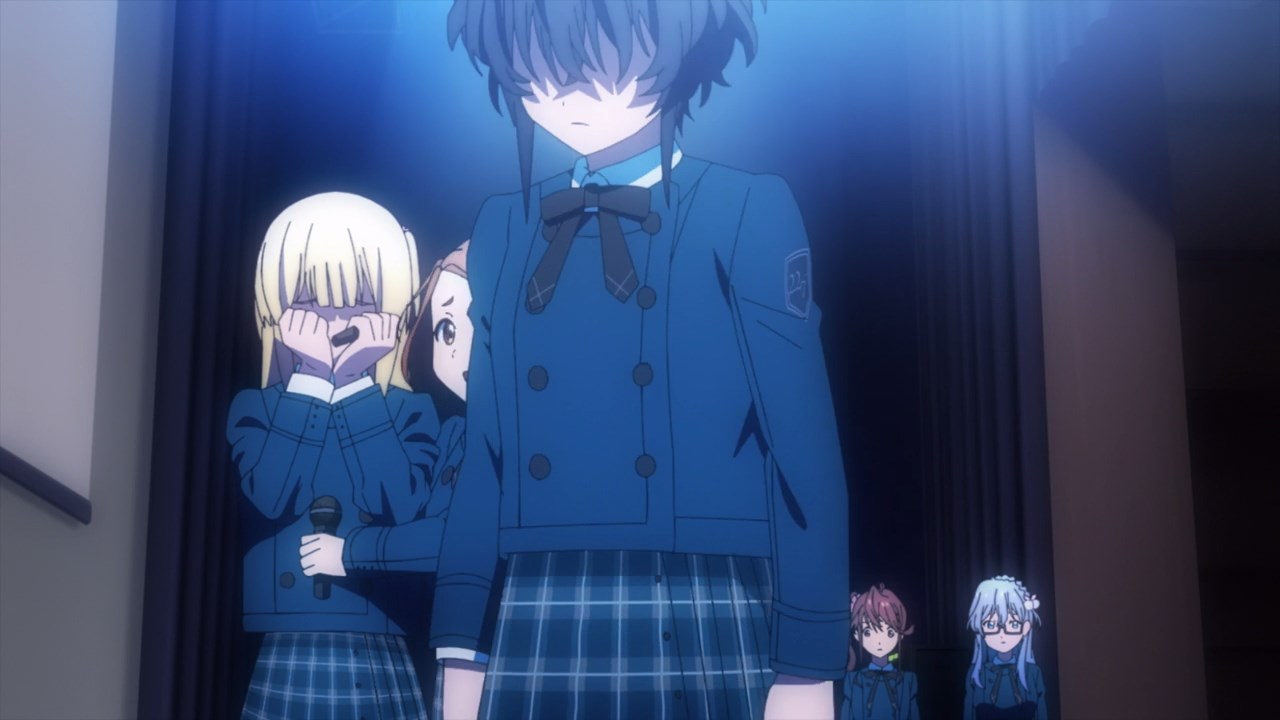 Also, it gets even worse when Miu Takigawa leaves the stage, disgusted of becoming an idol in the first place after being fired at her part-time job and selling her keyboard.

Dammit, I don’t want to see this episode end in a downer note! 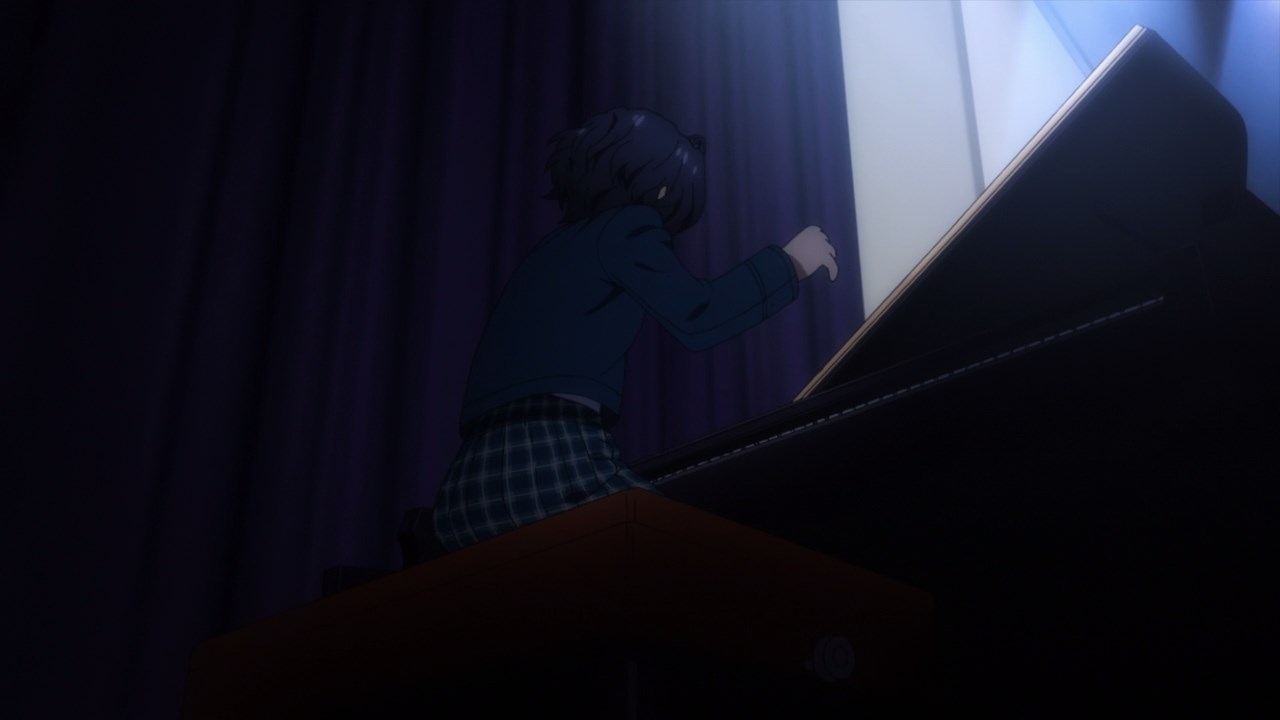 But wait a minute, turns out that Miu has decided to play the piano, but does she know the notes of the song?

Heck, what if she screwed up much like how Rikako Aida made a mistake during Aqours 1st Live? Man, I can’t bear to watch this! 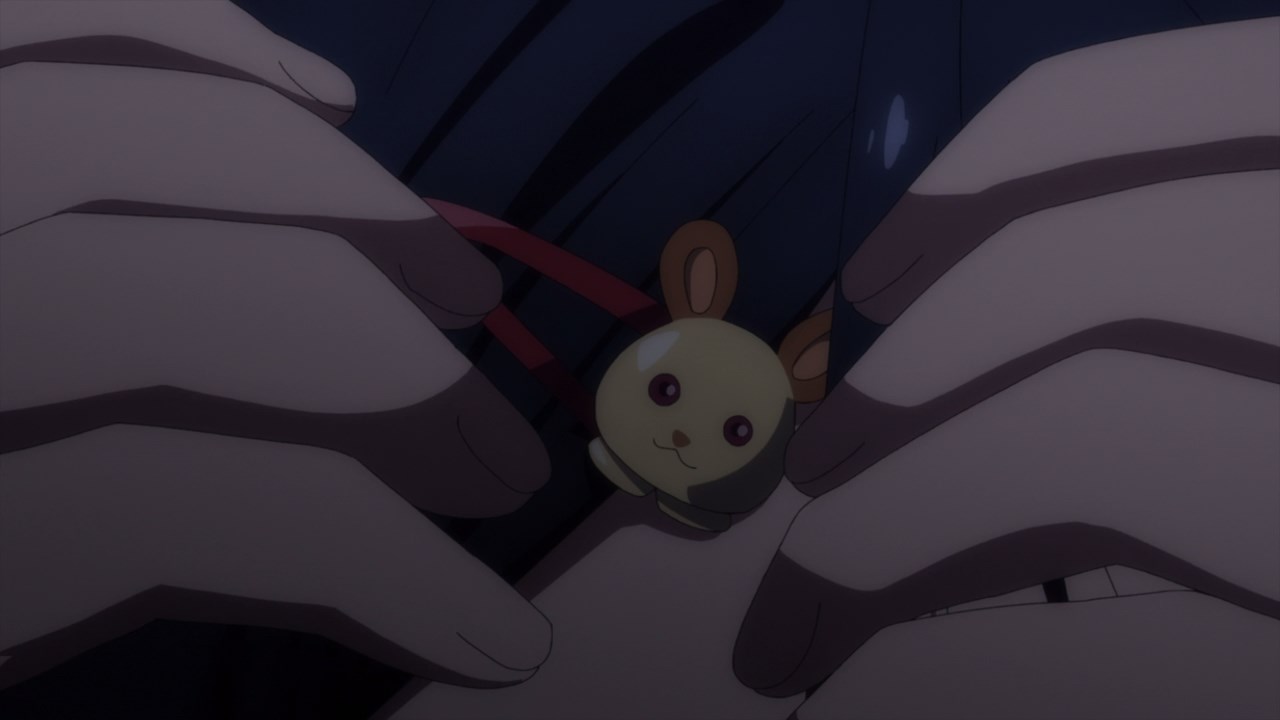 On the other hand, it looks like Miu has decided to wear Nicole’s hairpin on this crucial moment. Still, I’m worried on what’s gonna be the outcome of this concert… 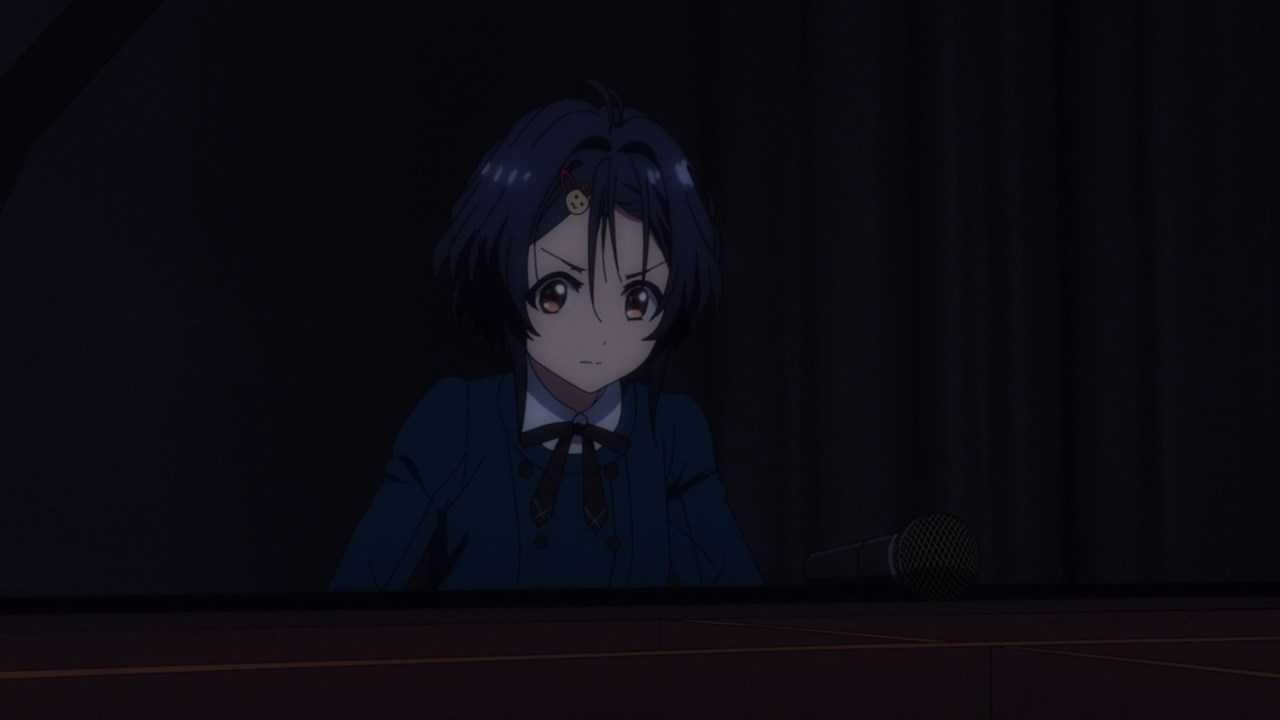 Fortunately, this concert is saved when Miu Takigawa played “Boku wa Sonzai Shiteinakatta” and man, she’s amazing to see her play the piano.

It seems that her dreams of becoming a musician still lives on in her heart! 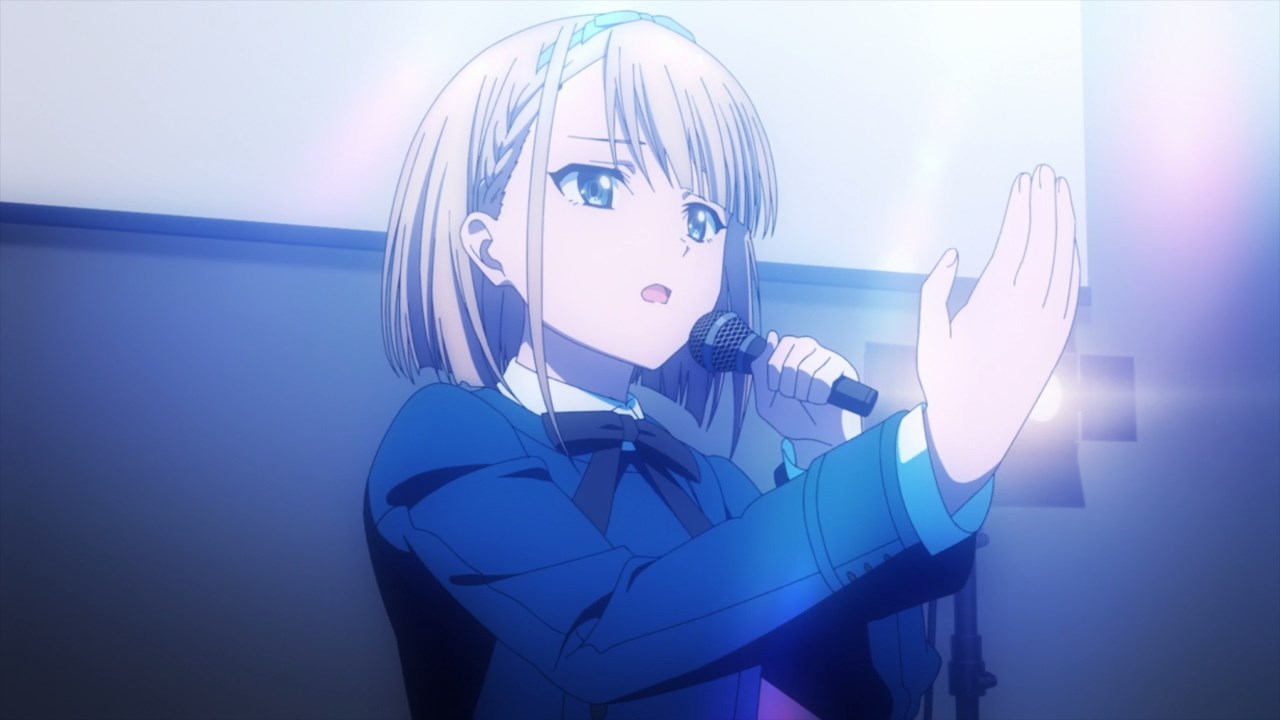 But thanks to Miu Takigawa’s impromptu piano performance, Nicole Saitou sings the rest of the song and I’m sure that the rest will follow suit. 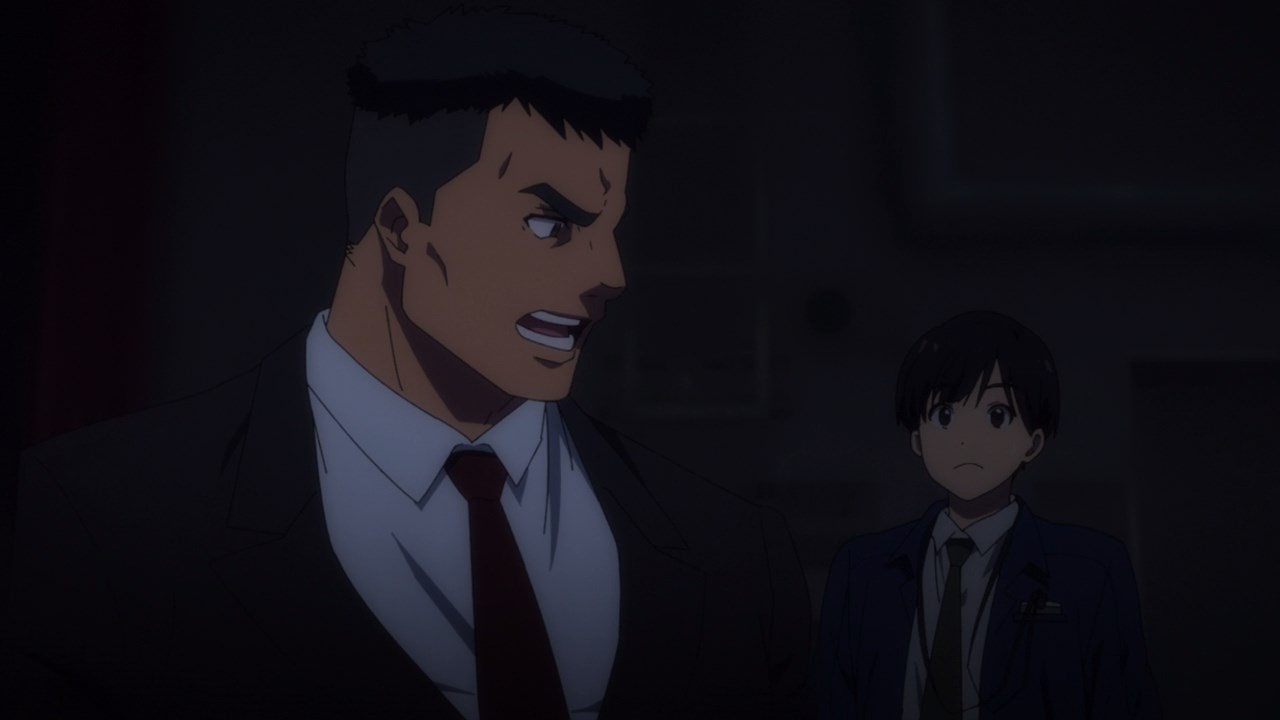 Meanwhile, Aoi Gouda told the staff to focus the spotlight and camera towards Miu Takigawa as they can’t miss this moment! 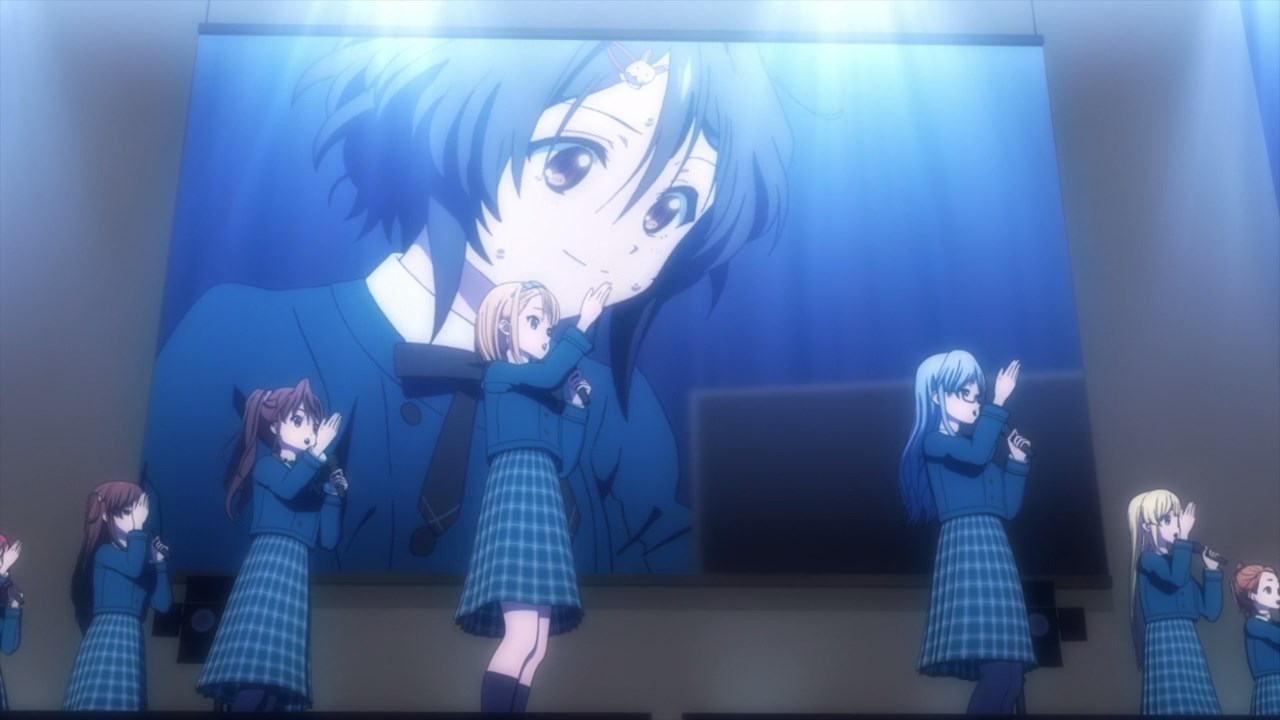 And so, 22/7 finished performing “Boku wa Sonzai Shiteinakatta” thanks to Miu Takigawa playing the piano. Man, if only Sony Music would release a piano version of that song! 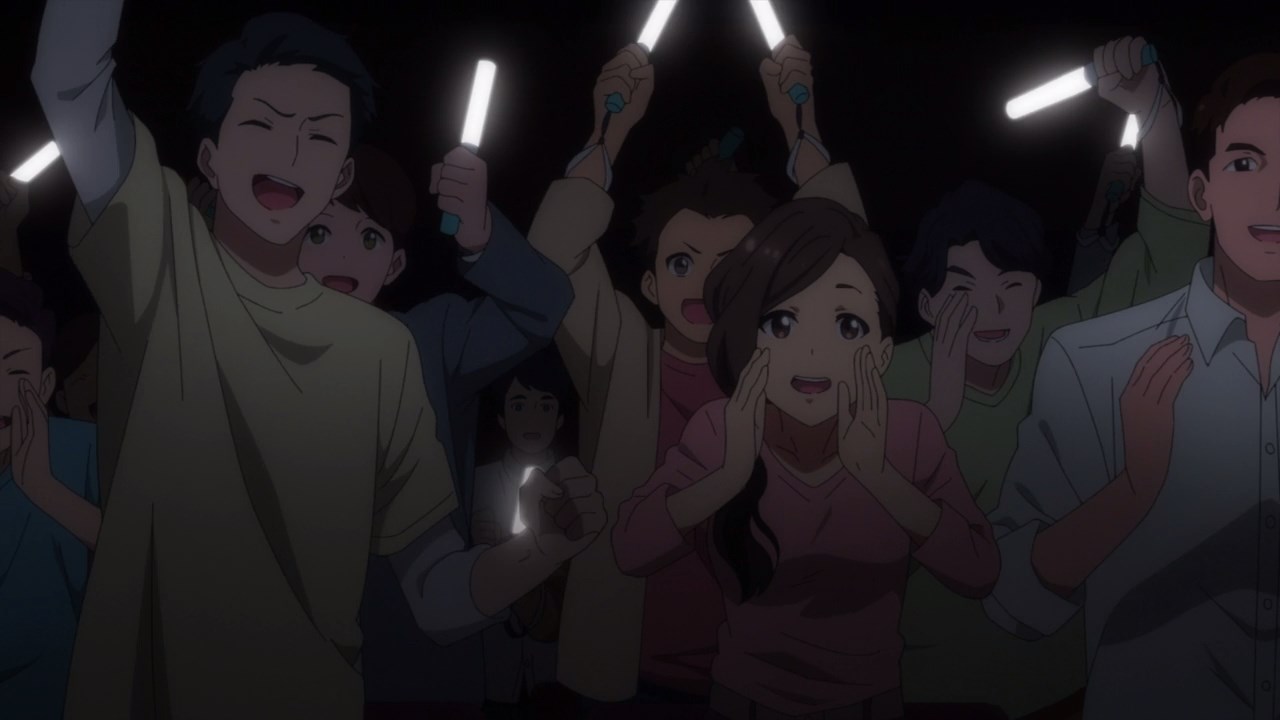 But hey, the crowd loves it as the concert ended on a happier note. Also, I’m sure that Miu’s mother is happy to see her daughter perform well. 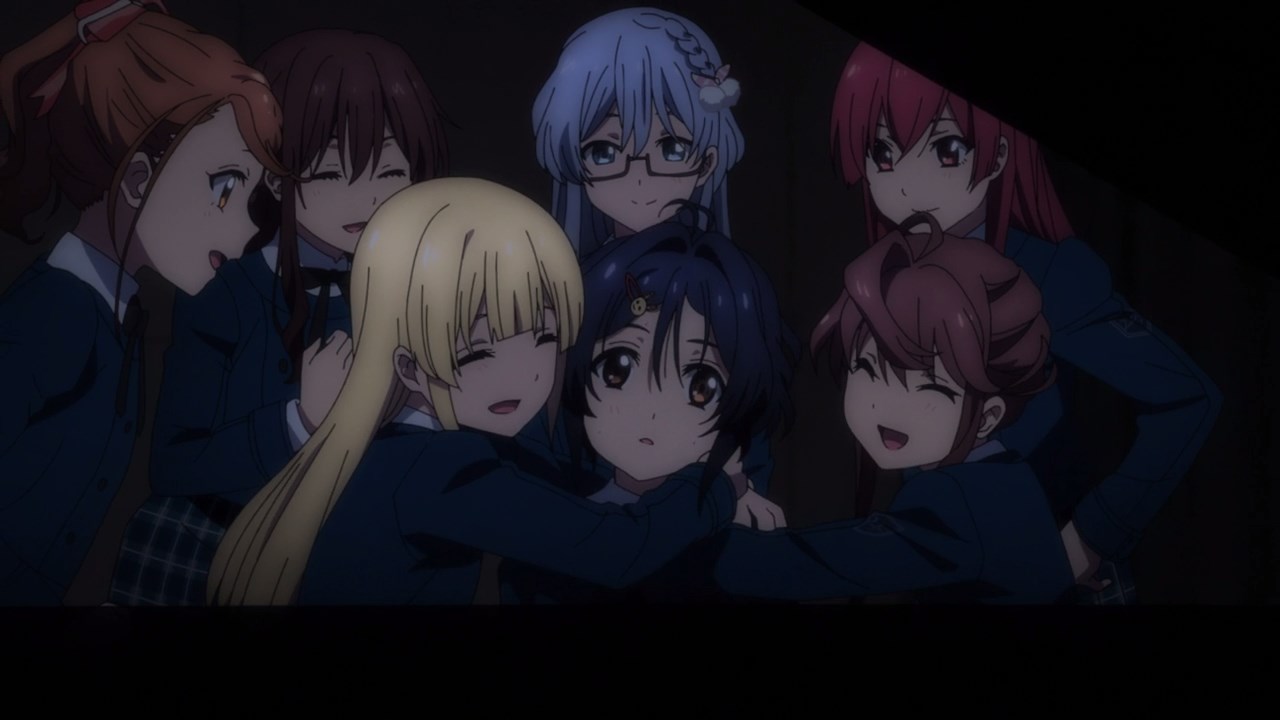 As for the girls, looks like they’re surprised to see Miu Takigawa having such a great talent of playing the piano.

Gotta give props to The Wall for making her as the center and the MVP because she saved this concert! 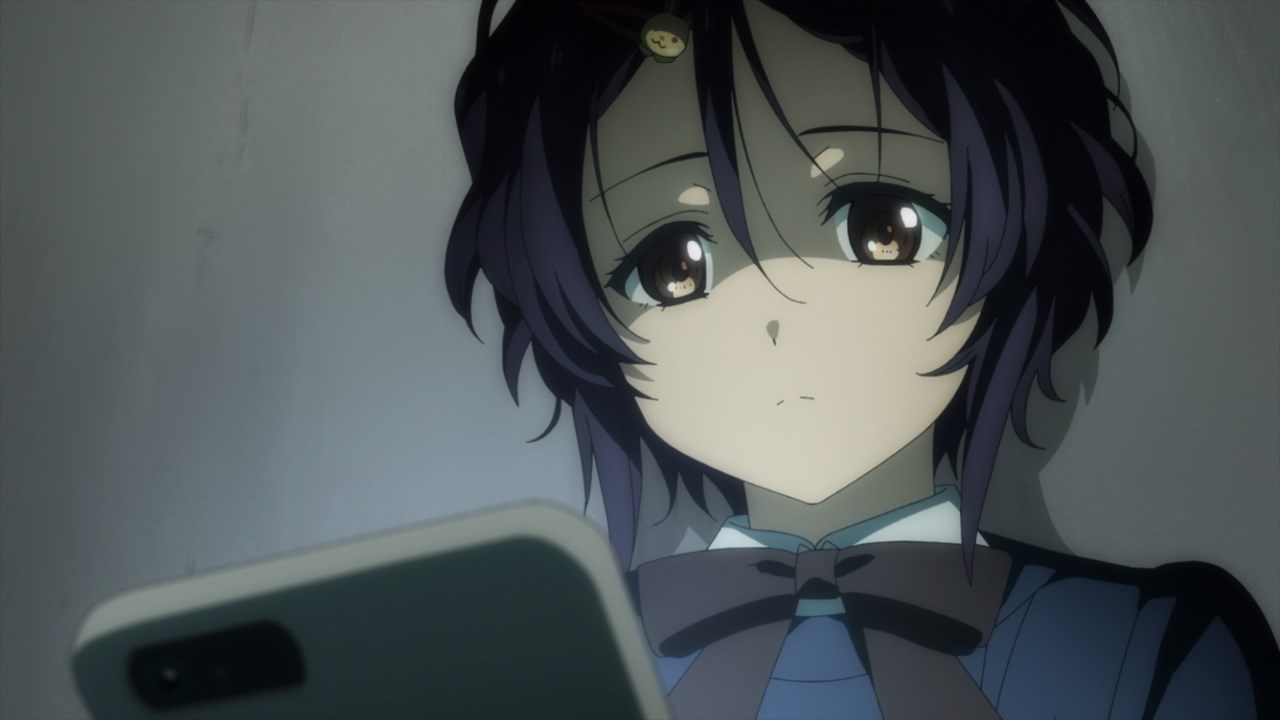 Afterwards, Miu Takigawa got a text message from her mother in which wants her daughter to explain why she got into the idol business without her knowledge. 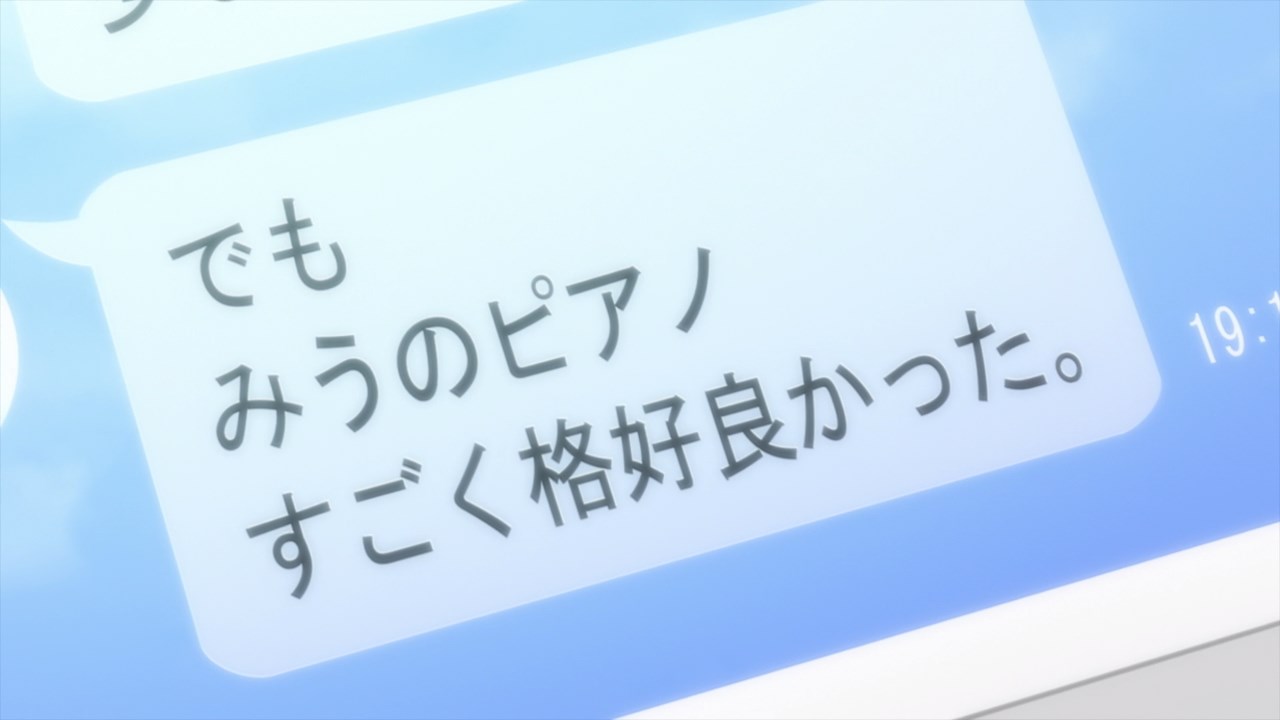 However, she told Miu that she enjoyed her performance so I have to say that Miu’s mother is not angry at her. 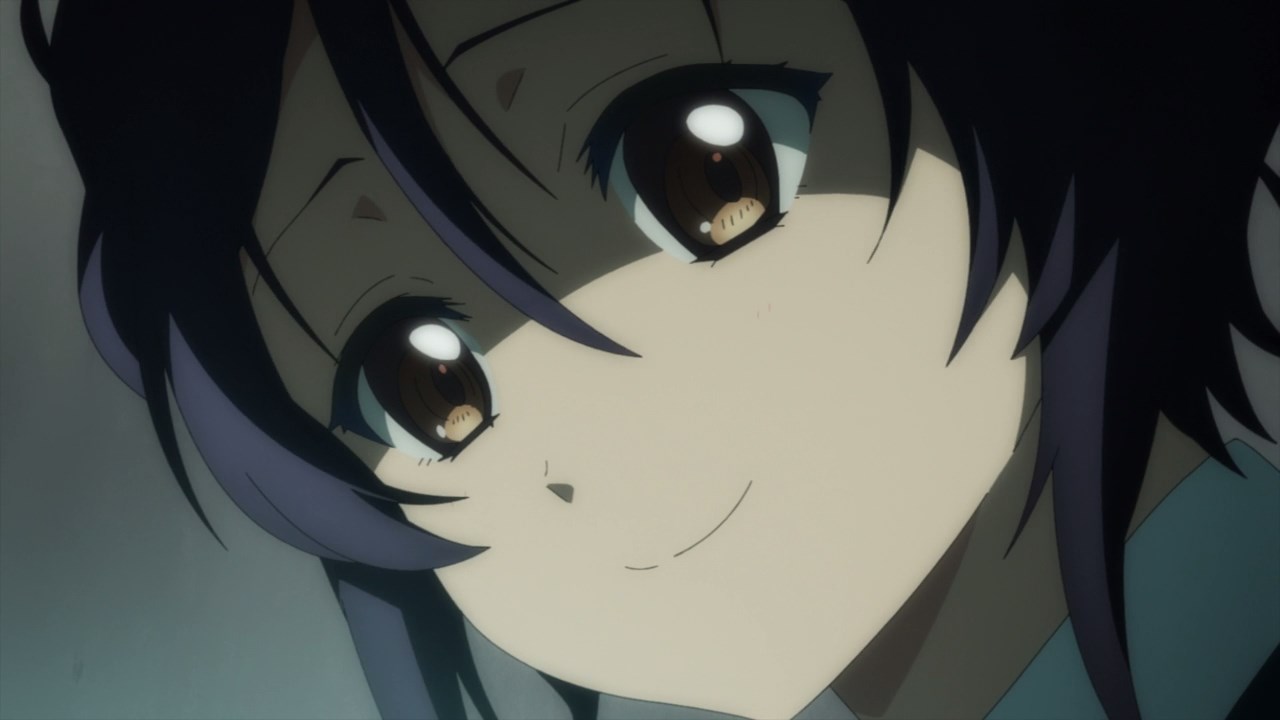 Well then, it looks like this episode didn’t end badly. In fact, I give props to Miu for bouncing back from her misery, although Takigawa needs to prove herself more if she wants to be the number one idol! 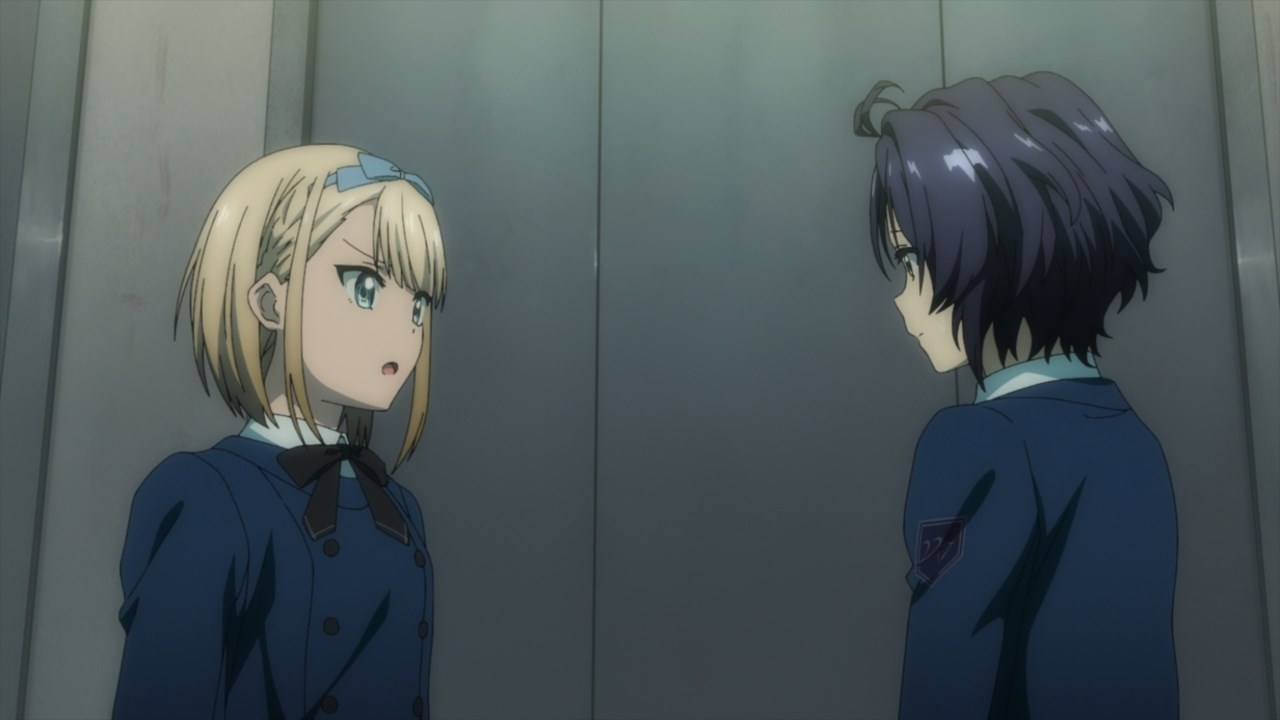 One last thing, here’s Nicole Saitou where she told Miu Takigawa that she doesn’t like people who apologize much, but she told Miu that the hairpin looks great on her so Nicole didn’t act harshly in the end.

Anyways, I’ll see you next time as 22/7 will face even greater challenges now that they made a successful debut. Of course, they’re at the mercy of The Wall’s unpredictable decisions so we’ll have to wait and see on what order shall it give to those girls.