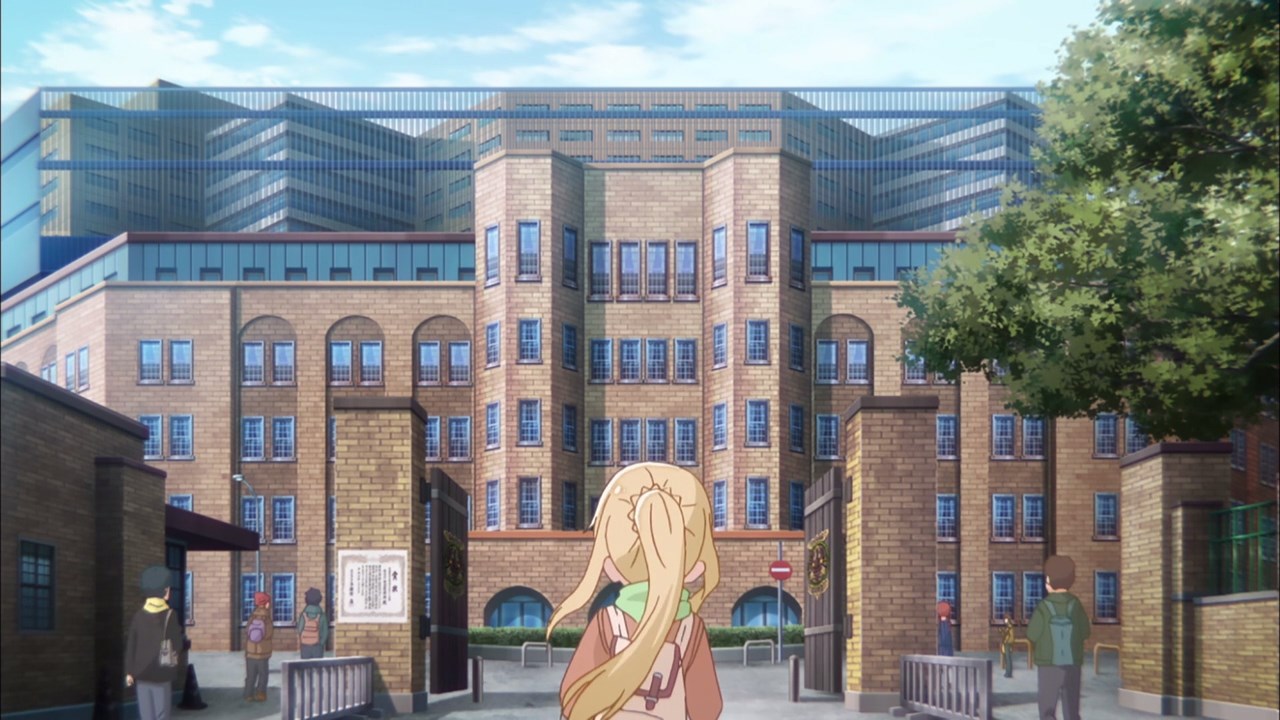 Well look what we have here, Mai Inose will be participating at the annual Earth Science Olympiad where various students will test their knowledge and skills on various subjects like geology and astronomy.

Of course, this is just a qualifier where one student will become the Japanese representative for the World Earth Science Olympiad, so I wish Ino-sempai good luck on qualifying at the Olympiad! 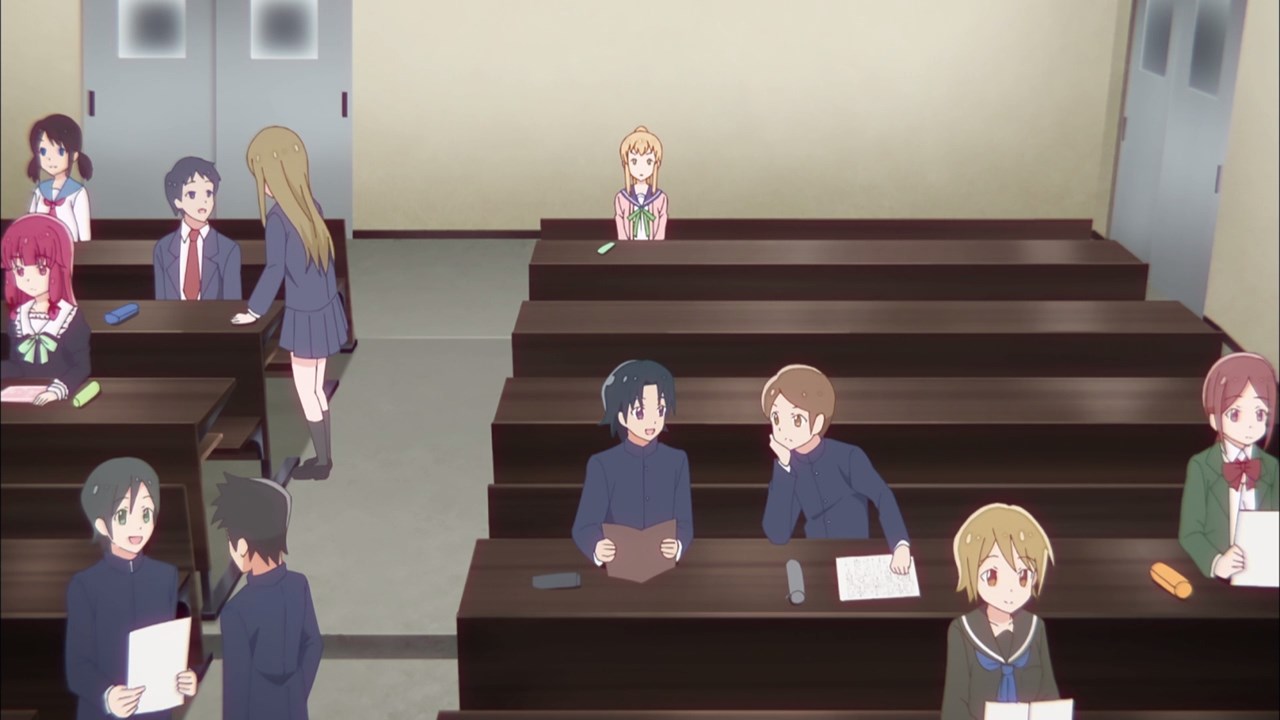 Unfortunately for Ino-sempai, she’s having an awkward time as Mai is sitting at the back all by herself while the rest are at the front. Man, it’s sucks that she went there alone. 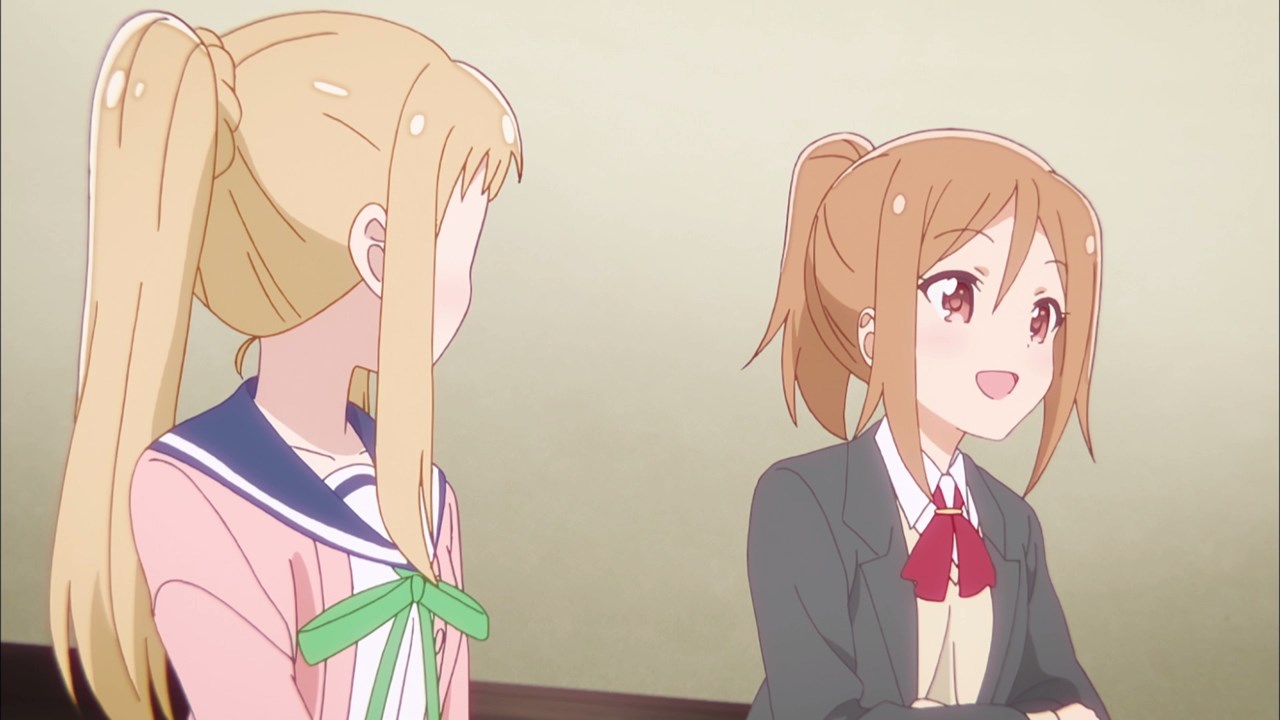 Luckily, Ino-sempai got some company in the form of Saeki-san where she’ll take part in the Olympiad.

Thanks to Saeki’s presence, looks like Mai Inose calmed down a bit in time for the Earth Science Olympiad… 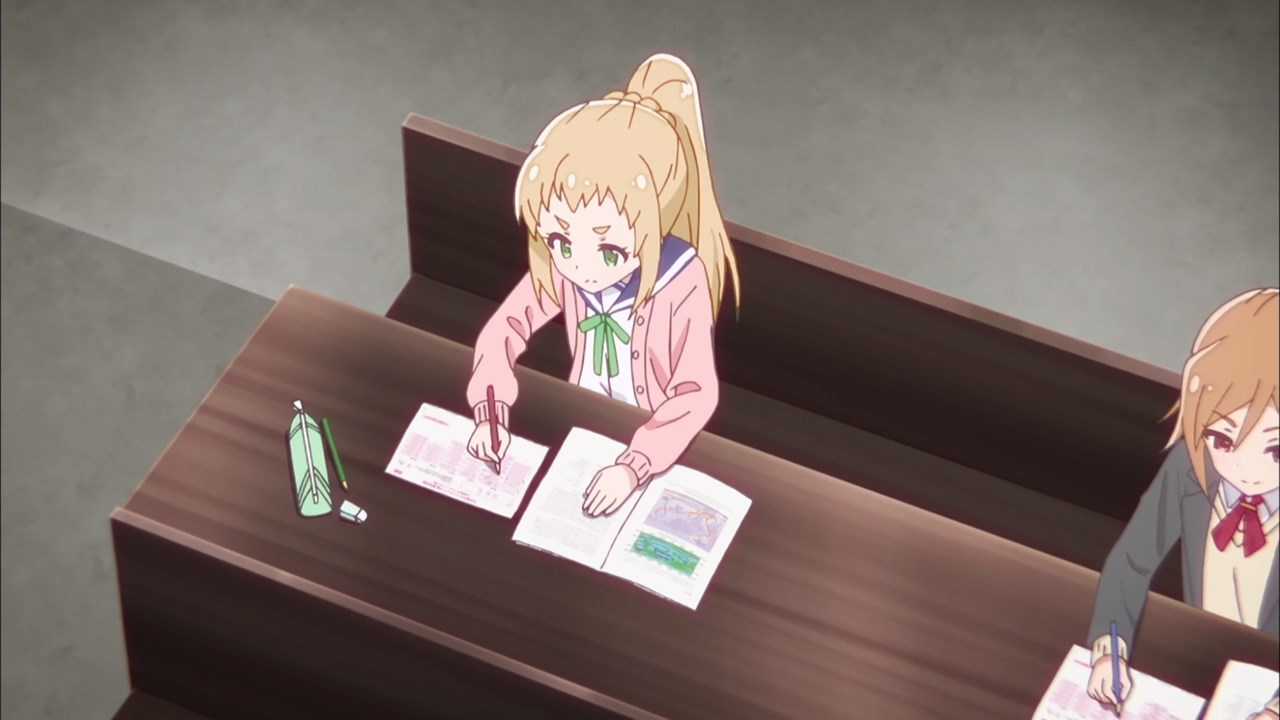 …which it look like an entrance exam rather than an academic contest.

Sadly, Mai Inose didn’t qualify for the Olympiad but it’s a great experience for her. Anyways, I’m sure that Ino-sempai will tackle it next year! 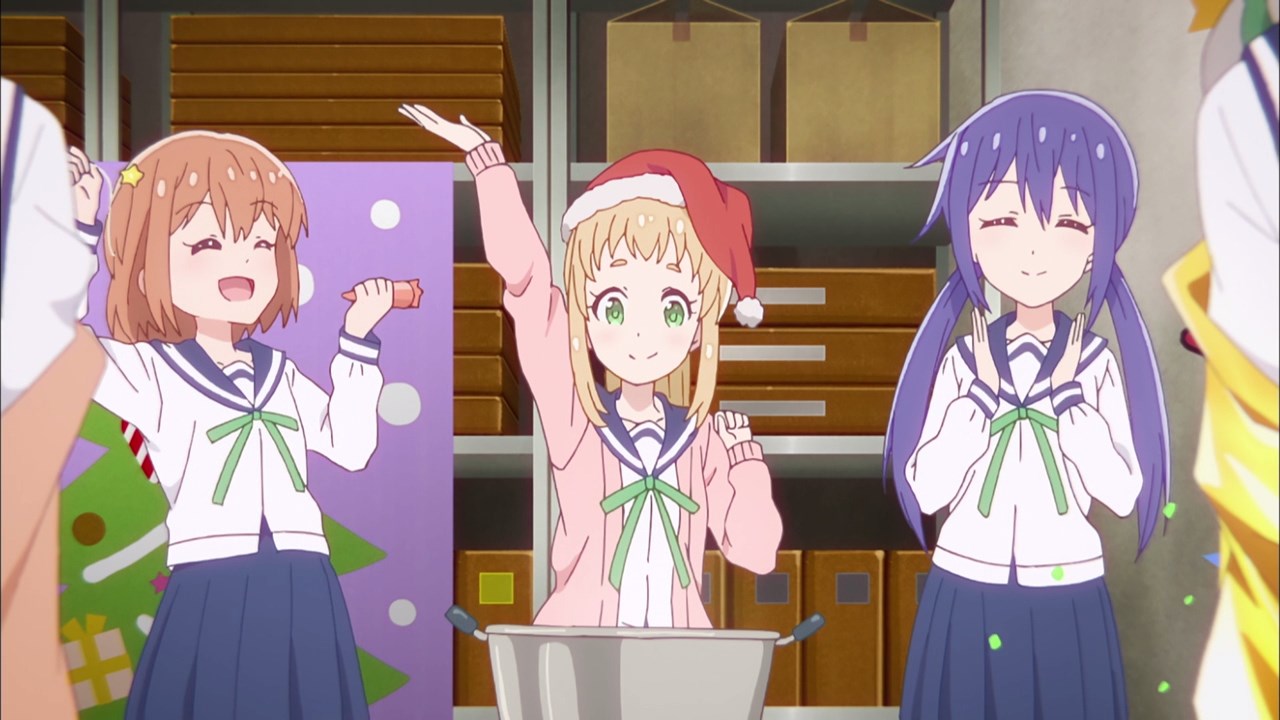 Now then, it’s time for the earth science club to host their Christmas party where Mira Konohata and the rest will have a hot pot meal. 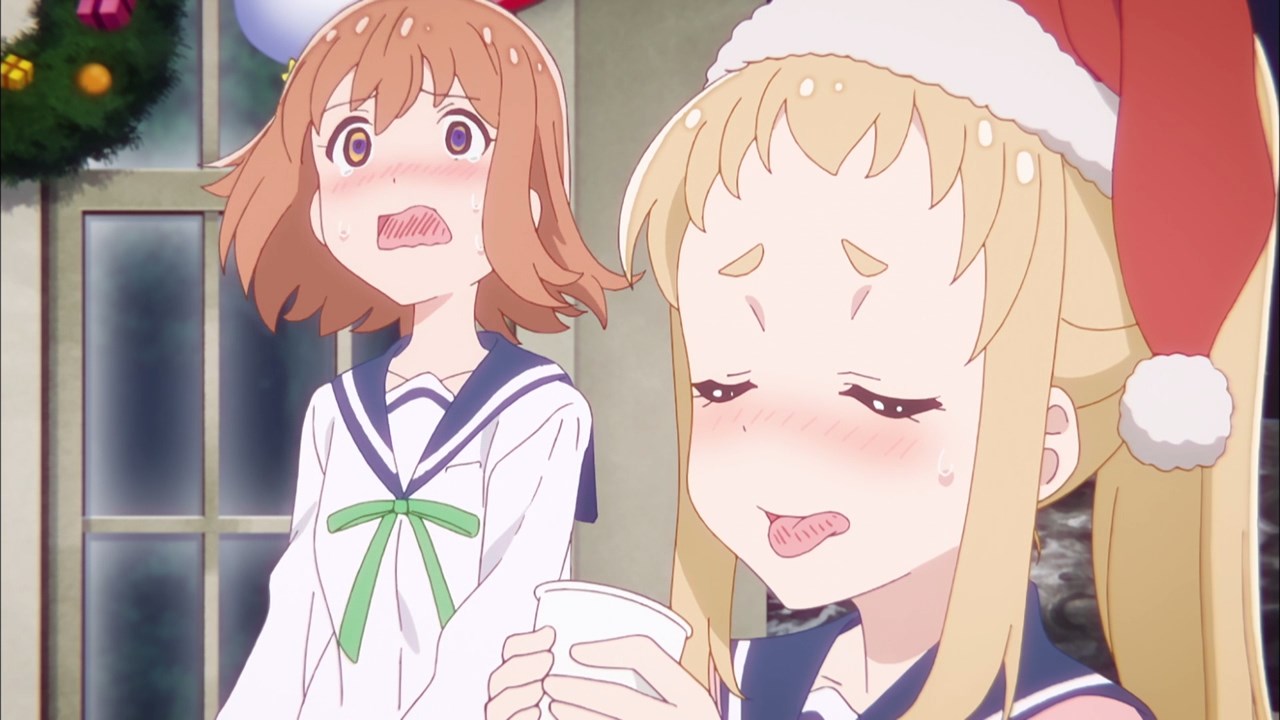 On second thought, seems that Mira and Ino-sempai made their hot pot meal very spicy. I guess they put too much kimchi and chili powder. 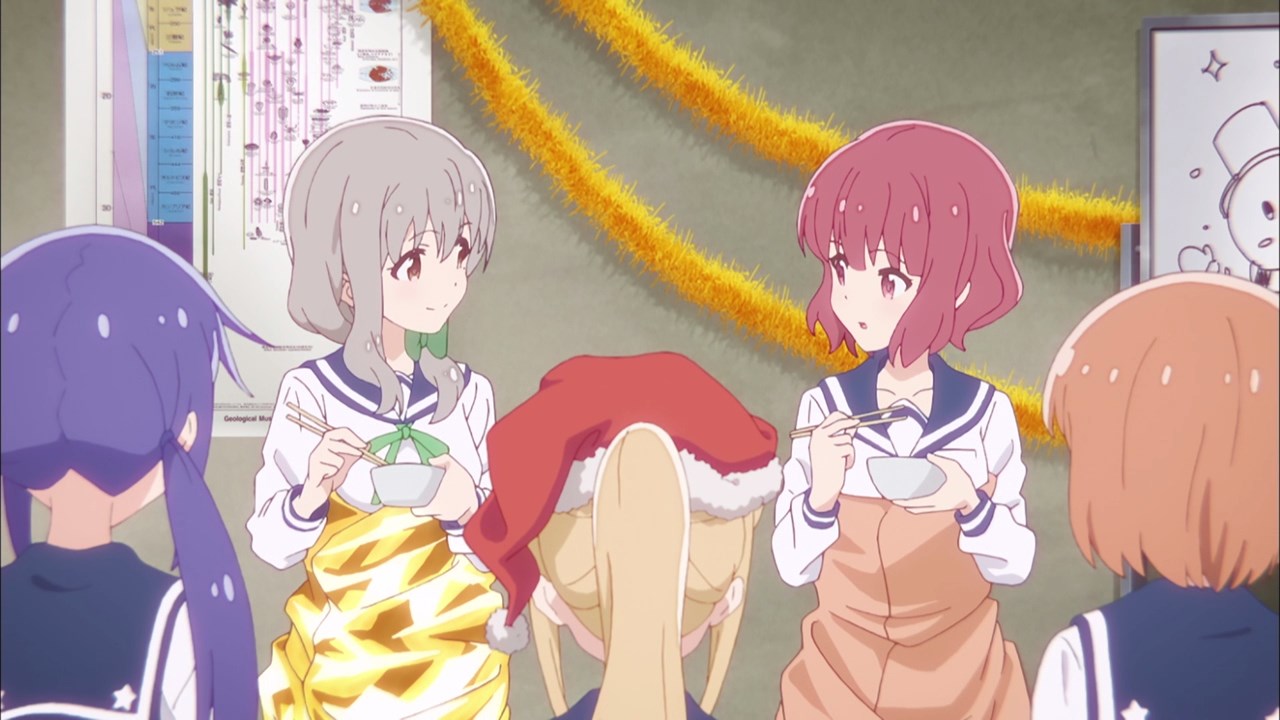 On the other hand, Mari Morino and Mikage Sakurai can handle the heat as they eat the hot pot meal. Looks like they have some mature taste buds there. 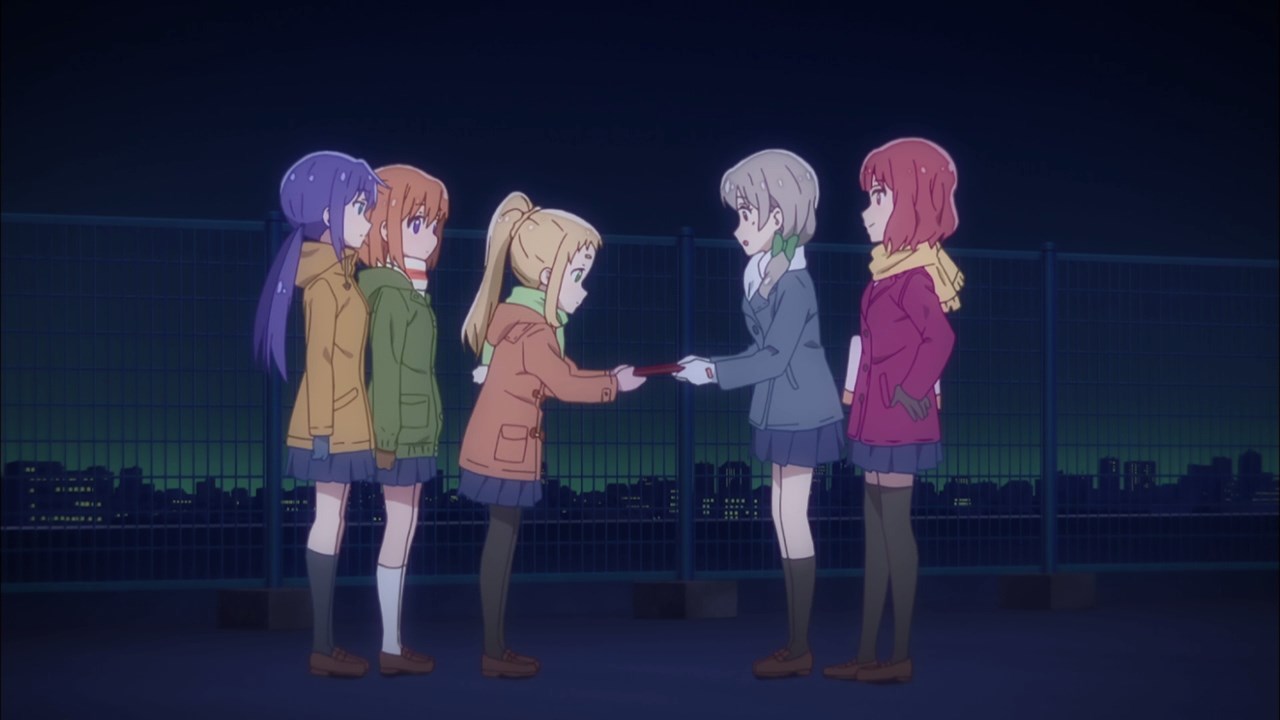 Afterwards, it’s time for Monroe and Sakura-sempai to give something special to their junior club members. I wonder what’s inside that box? 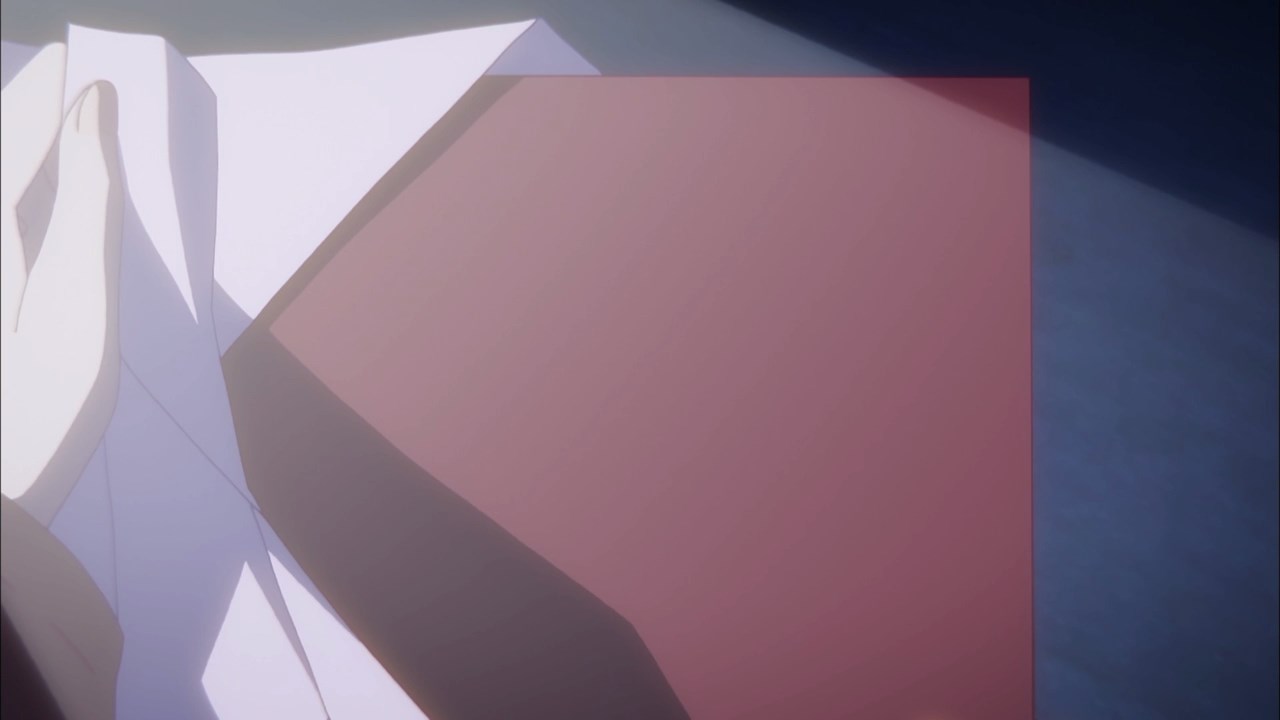 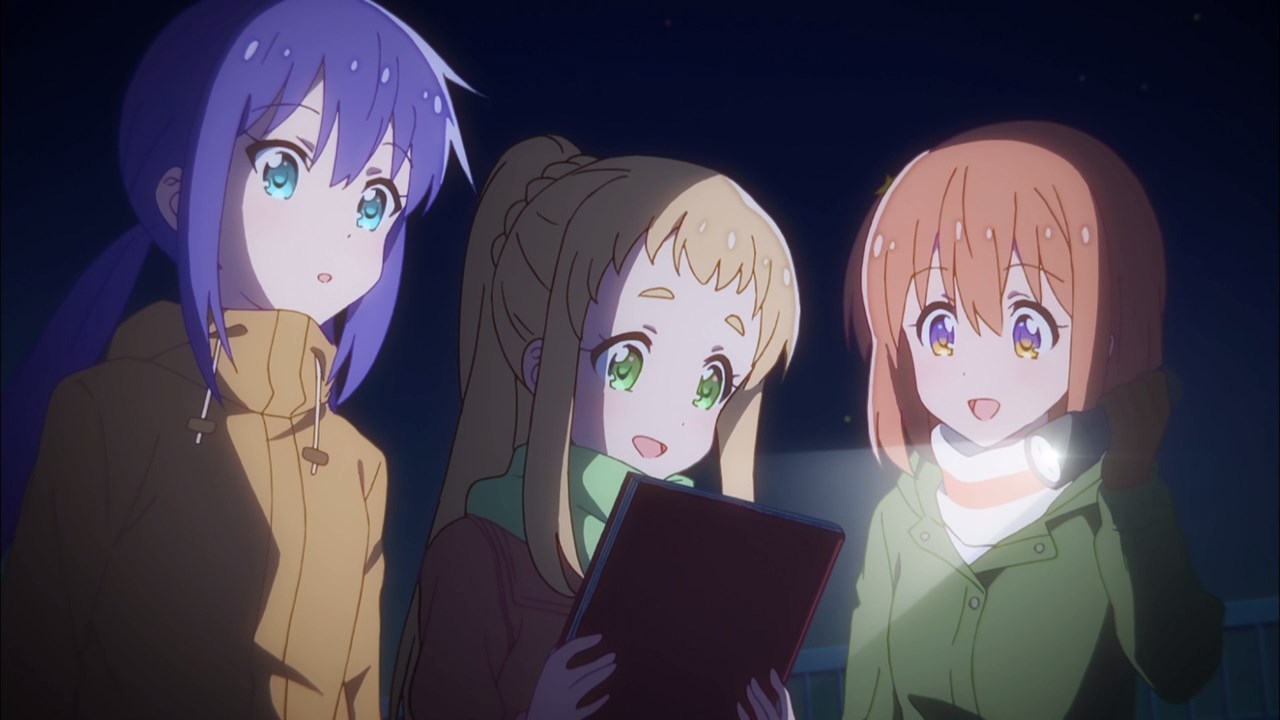 And while the juniors are happy to receive a gift, Mira and the rest want to see what’s inside the album. 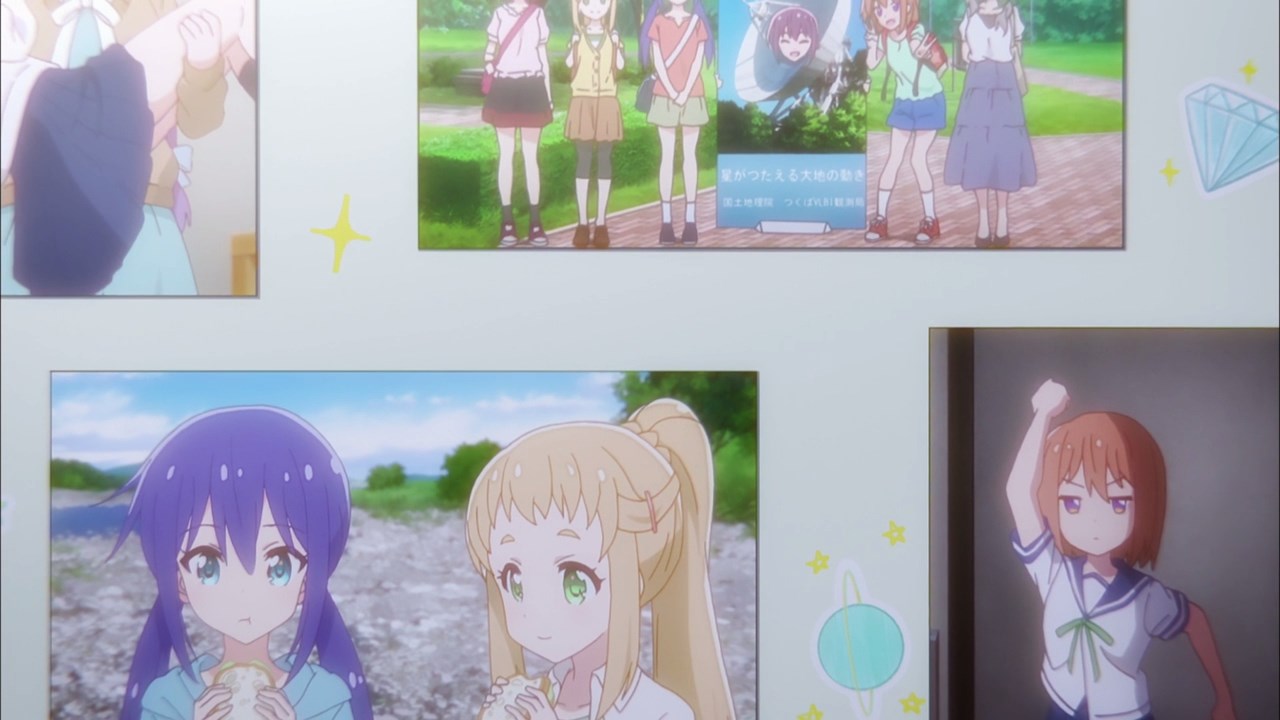 Well, turns out that it’s full of exciting, never before seen pictures of various club members. I have to say that it was a nice gift from both seniors! 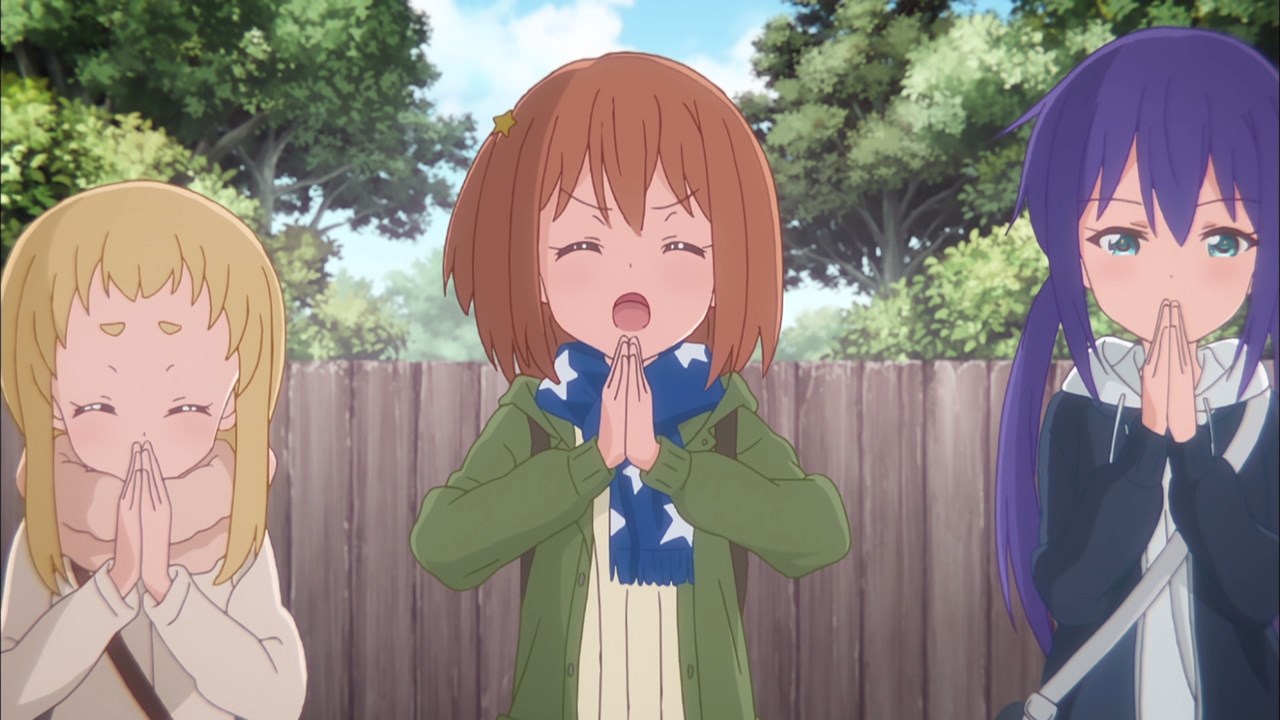 Anyways, the new year has finally arrived as Mira Konohata and the rest are at the shrine where they offer prayer to the gods for their personal wishes.

Case in port, Mira Konohata wants to find an asteroid together with Ao Manaka. 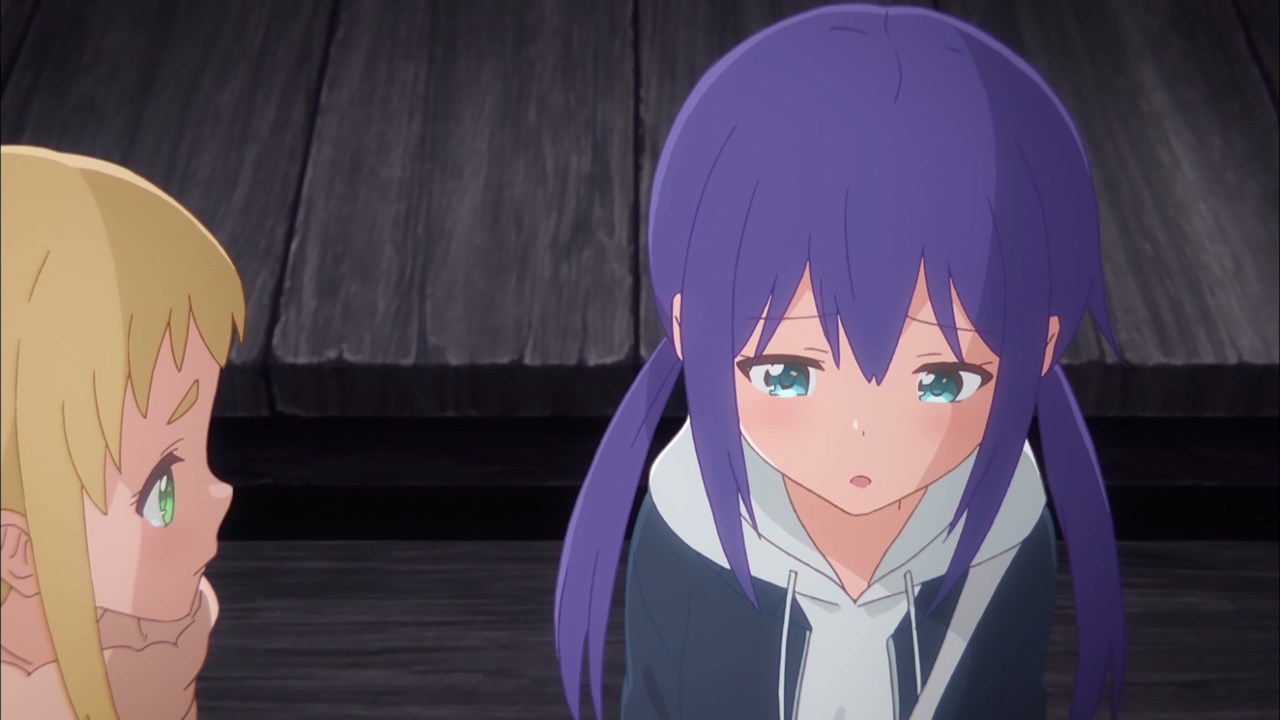 But speaking of Ao Manaka, she revealed that her father is gonna move to another place and therefore she might transferred to another school.

This means that Mira Konohata won’t have her dream fulfilled without her best friend. 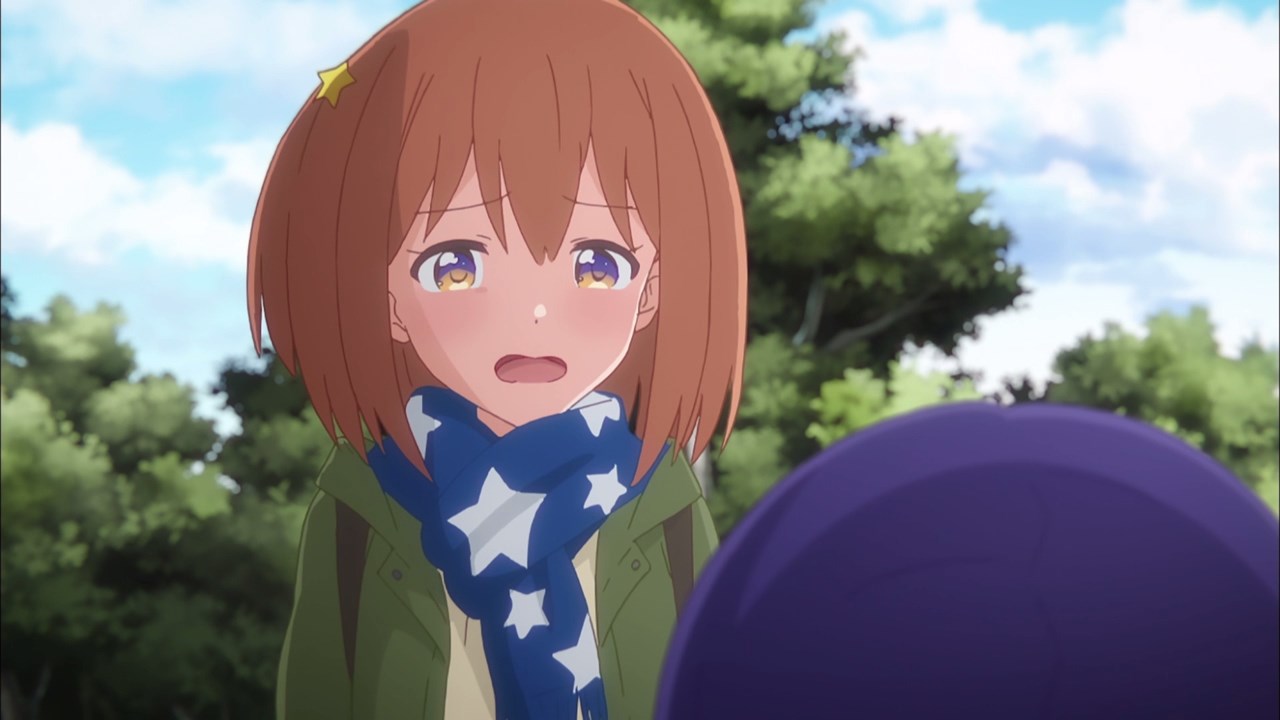 And this news doesn’t take well for Mira as she doesn’t want to lose Ao-chan. On the other hand, when will the earth science club find members for the next school year? 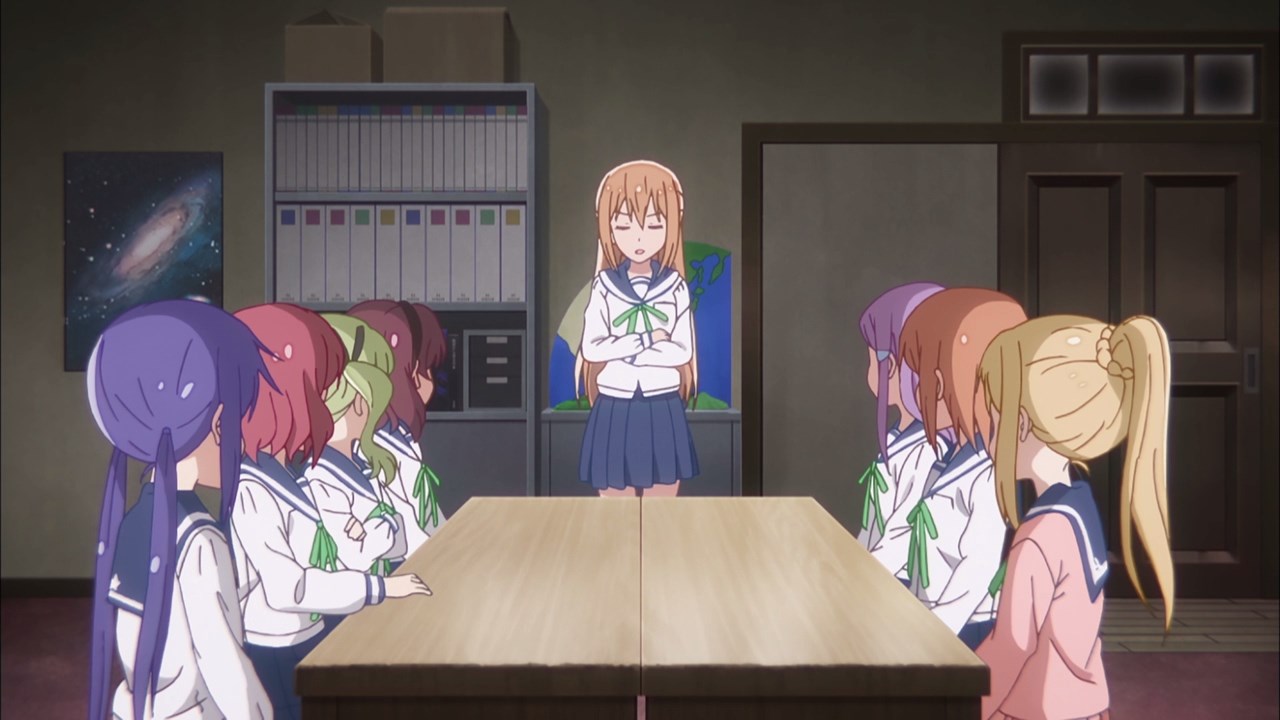 Fortunately, seems that there’s a silver lining as Misa Konohata has decided to leave the house as she’ll rent an apartment because her college of choice is very far.

This means that her room will be vacant as Misa offered Ao-chan to stay there. So yeah, Ao Manaka won’t have to transfer to another school, but what will be her decision then? 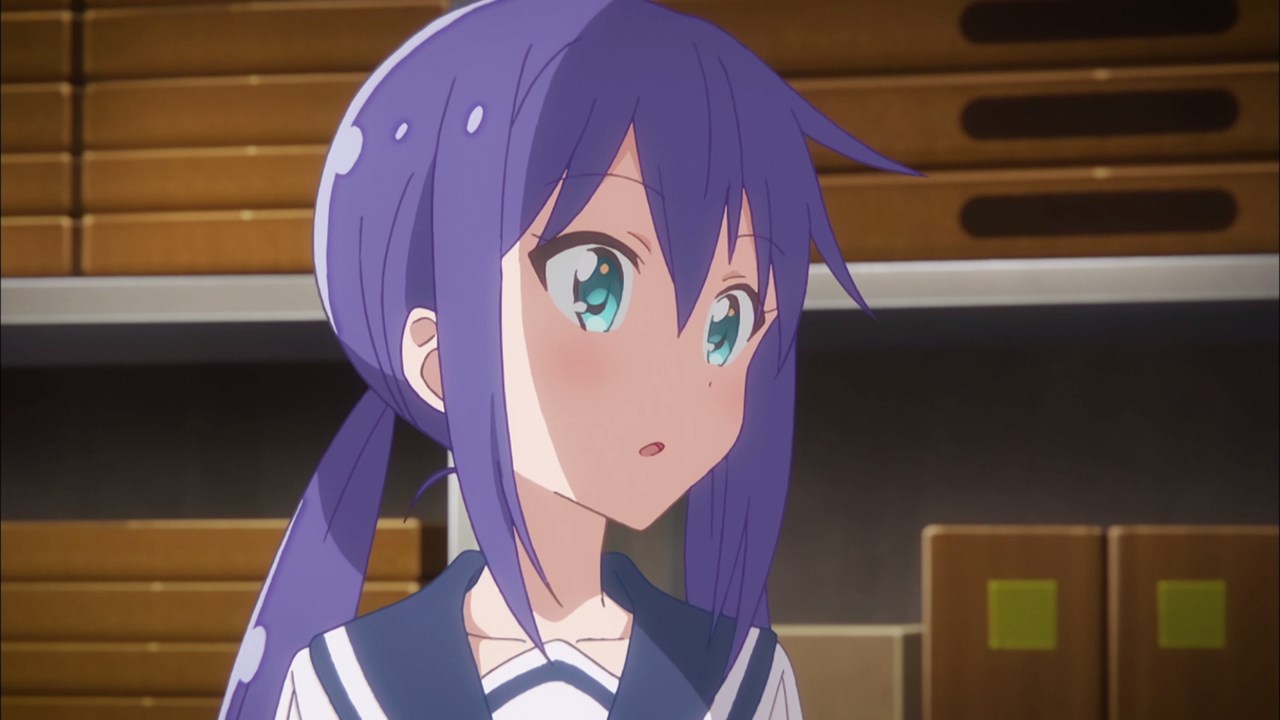 Anyways, looks like things are getting interesting in Koisuru Asteroid as Ao might stay at Mira’s house, meaning that their dream will be realized after all.

Then again, it’ll take years for them to find an asteroid and name it after themselves but anyways, tune in next time!