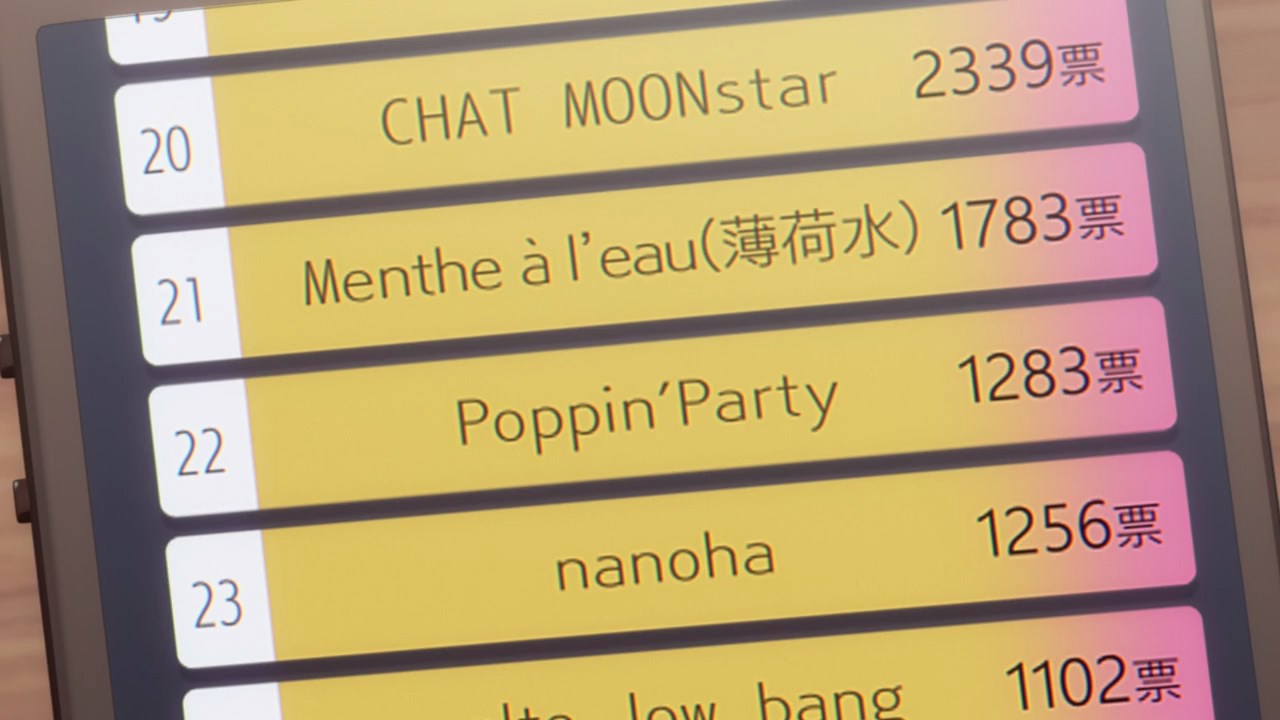 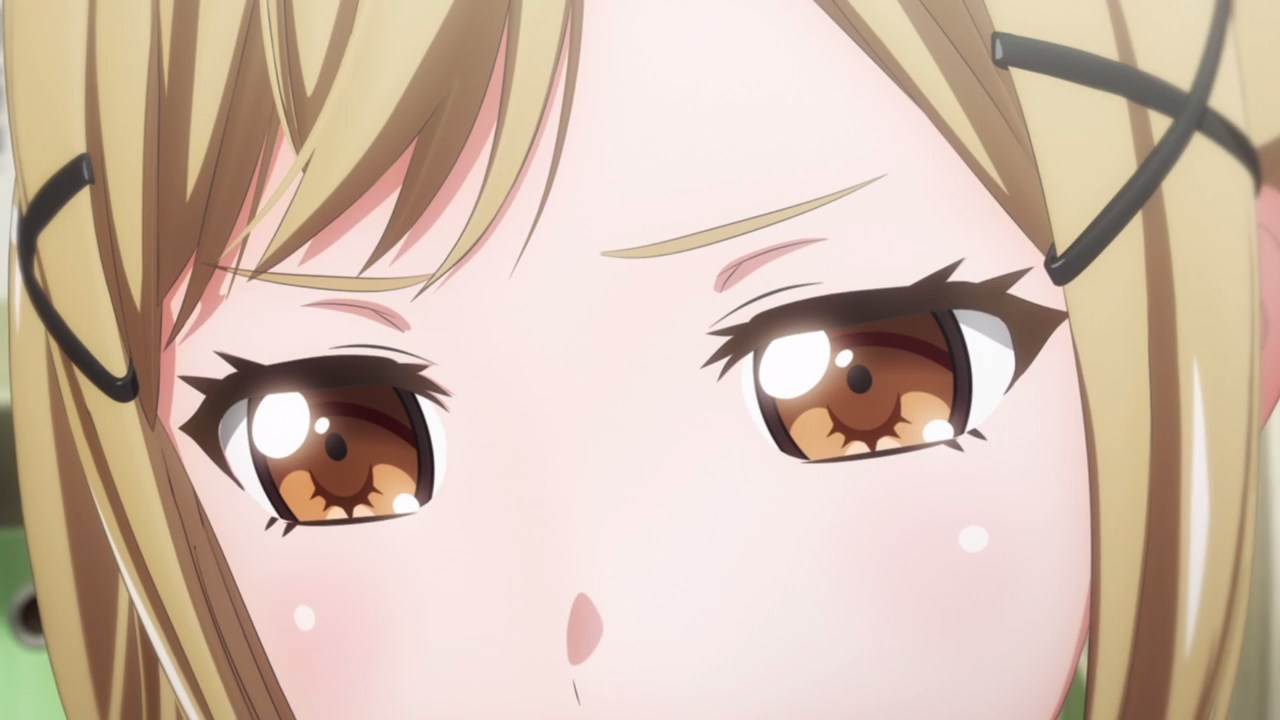 Let’s start this episode with Arisa Ichigaya where she looked up the rankings, only to find Poppin’ Party sitting currently in 22nd place.

While it’s a good thing that they’re gaining traction in BanG Dream! Girls Band Challenge, it’s not enough for PoPiPa to land them a spot at the Budokan. 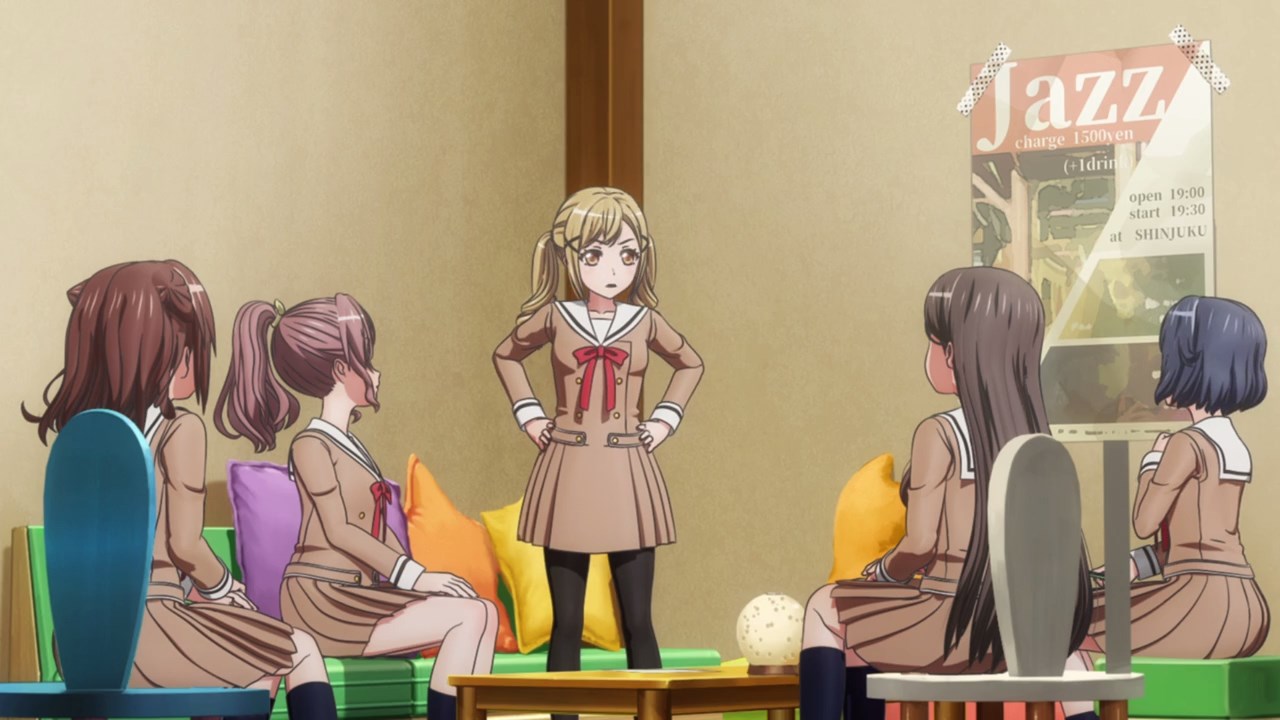 So, Arisa Ichigaya told Kasumi Toyama and the rest to step up their game if they wish to perform at the Budokan. Otherwise, performing there is nothing but a pipe dream. 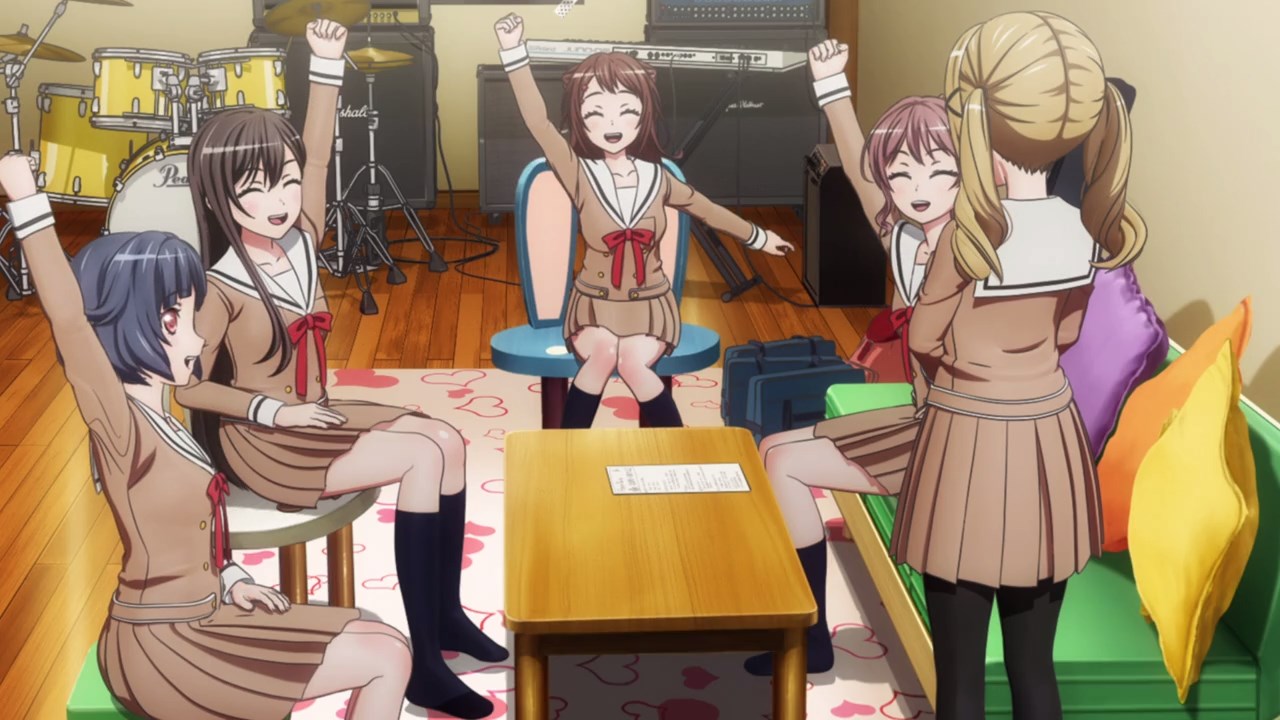 But yes, Poppin’ Party will do their best but I think it might be too late for Kasumi and the rest to land a spot at the Budokan final because only the top 2 girls bands will perform there.

Currently, RAISE A SUILEN is sitting in 1st place while Roselia moves down to 2nd place after the previous episode. 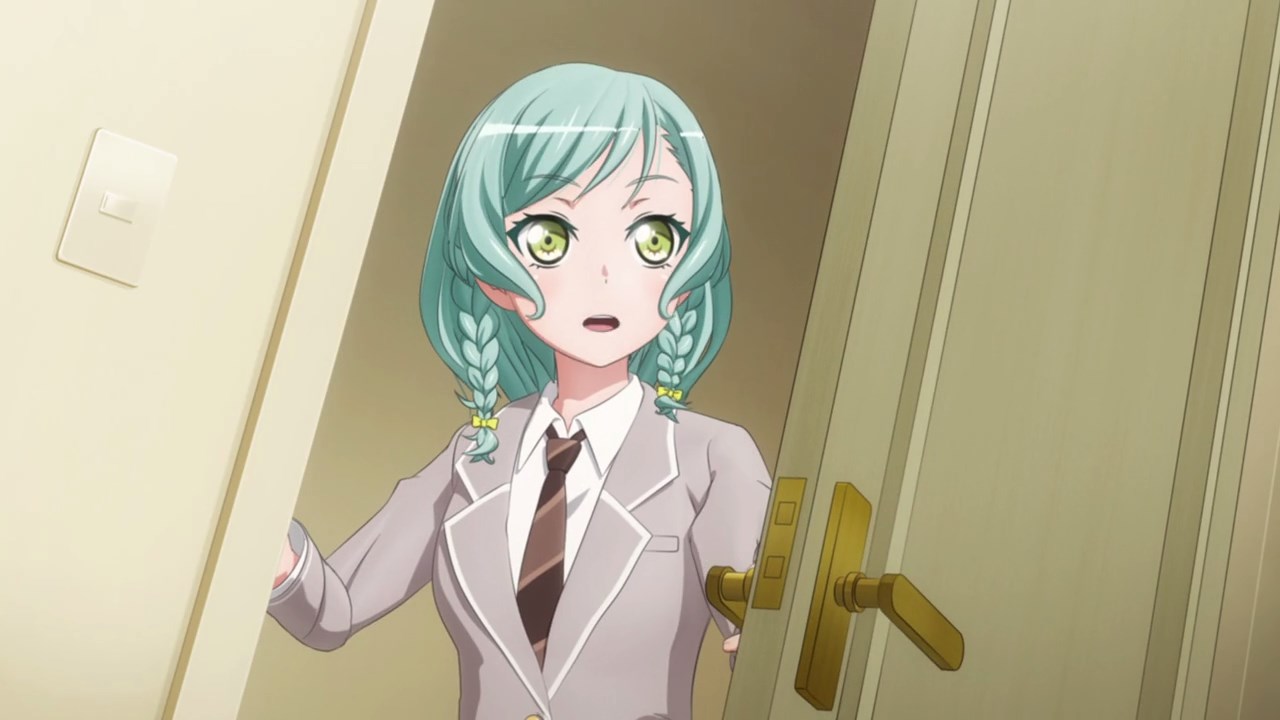 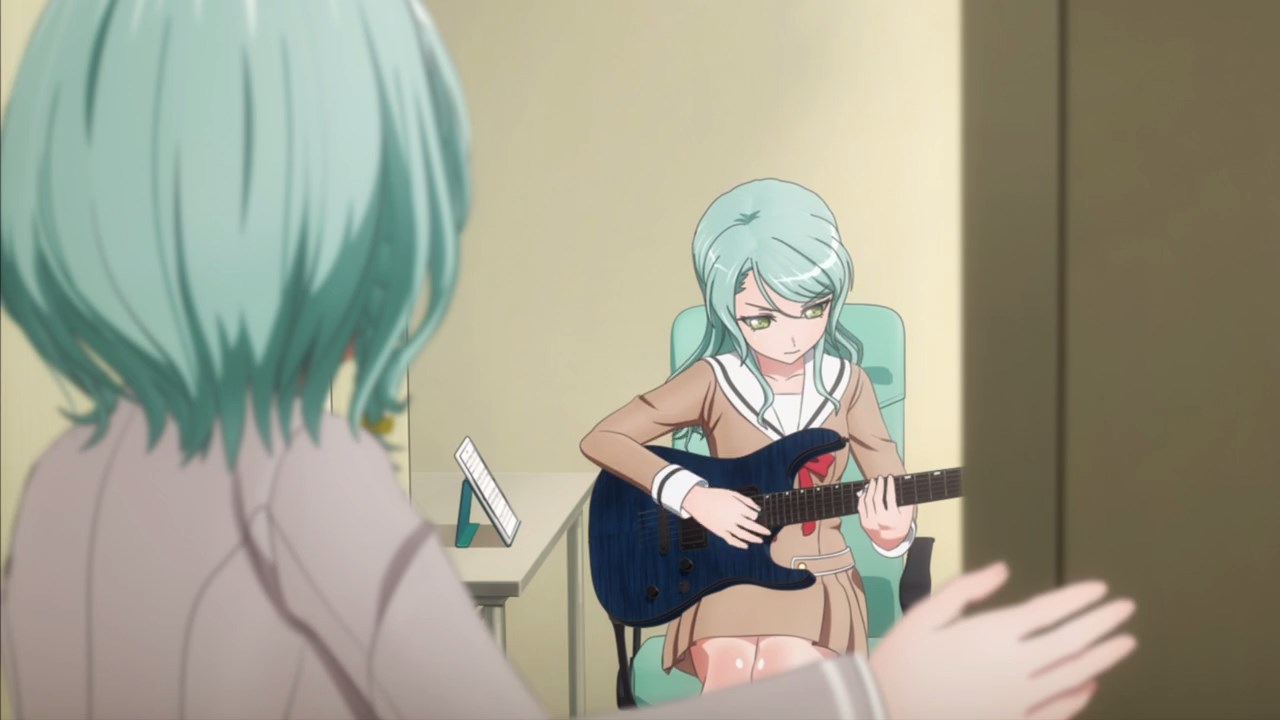 And speaking of Roselia, they’re still being affected by their loss against RAS, especially Sayo where she doesn’t want to lose again as she trains harder.

Of course, her twin-sister Hina is worried that Sayo is pushing herself too much. 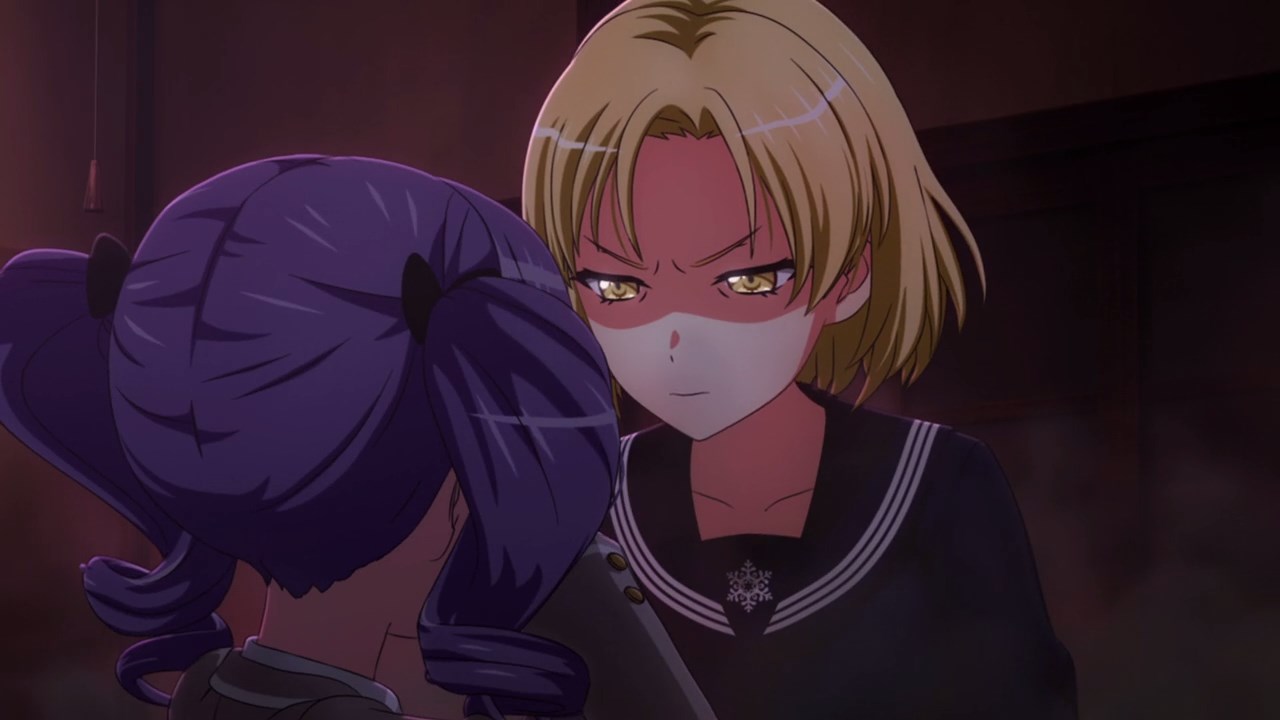 Meanwhile, looks like there’s no animosity between RAISE A SUILEN and Roselia after their showdown like Masuki Sato for example where she found out that Ako Udagawa is so friggin’ cute in her chuunibyou persona. 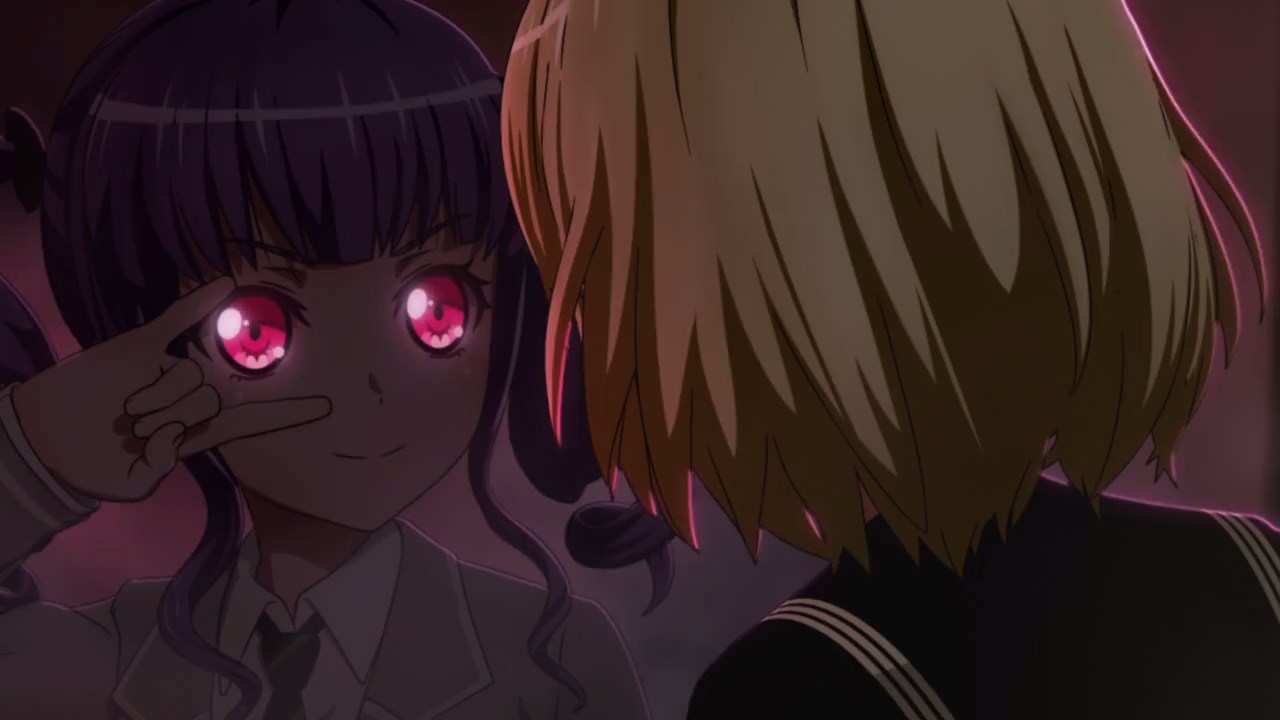 Then again, Ako just froze up after seeing her mean glare. Well, looks like Udagawa can’t do her chuuni routine in front of Masking. 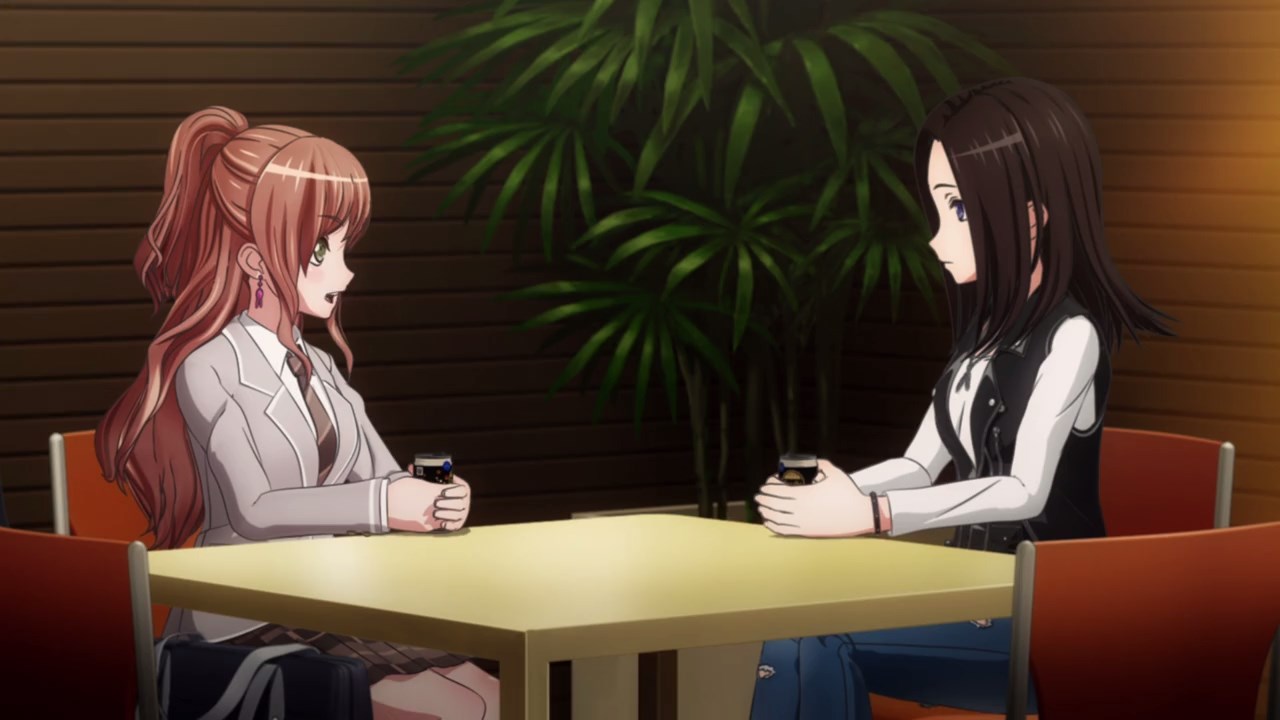 With that said, they’re just chilling out where both bands are having a pep talk (with the exception of Chu2 and a bit from Sayo Hikawa). So yeah, there’s no animosity there! 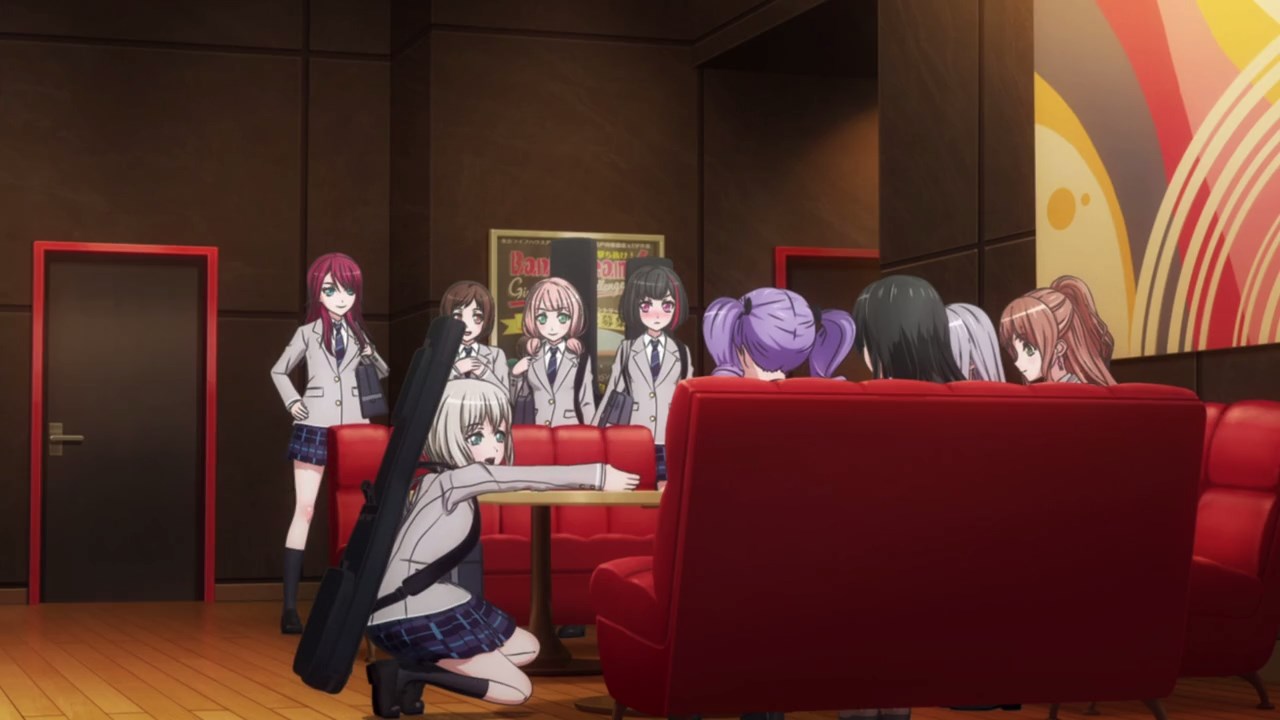 Now then, looks like Afterglow is here to cheer Roselia up as Moca Aoba show something cool to Yukina Minato and the rest. 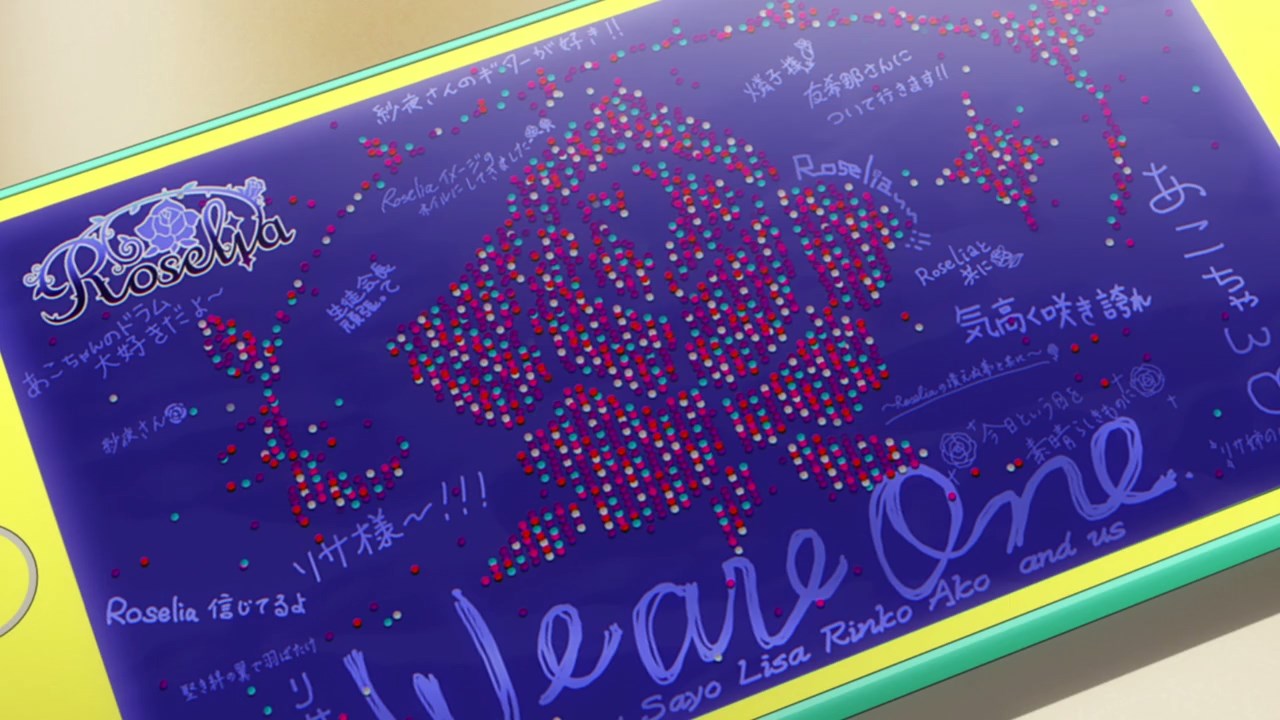 See this board from Moca’s phone? Roselia fans made a majestic flower!

Really, it’s nice that despite being the losers on that day, Roselia has some fans who are there to support them. 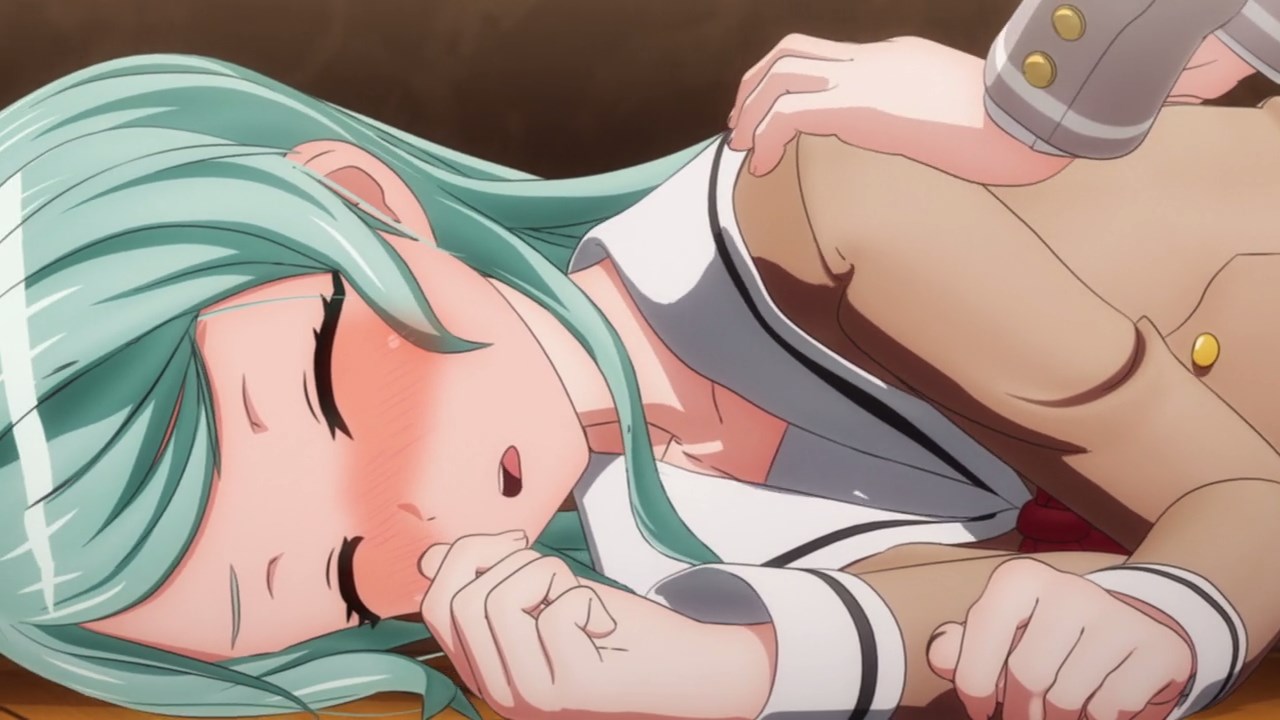 Unfortunately, seems that Roselia got caught in some trouble when Sayo Hikawa collapsed. Well, looks like Sayo shouldn’t push herself too much. 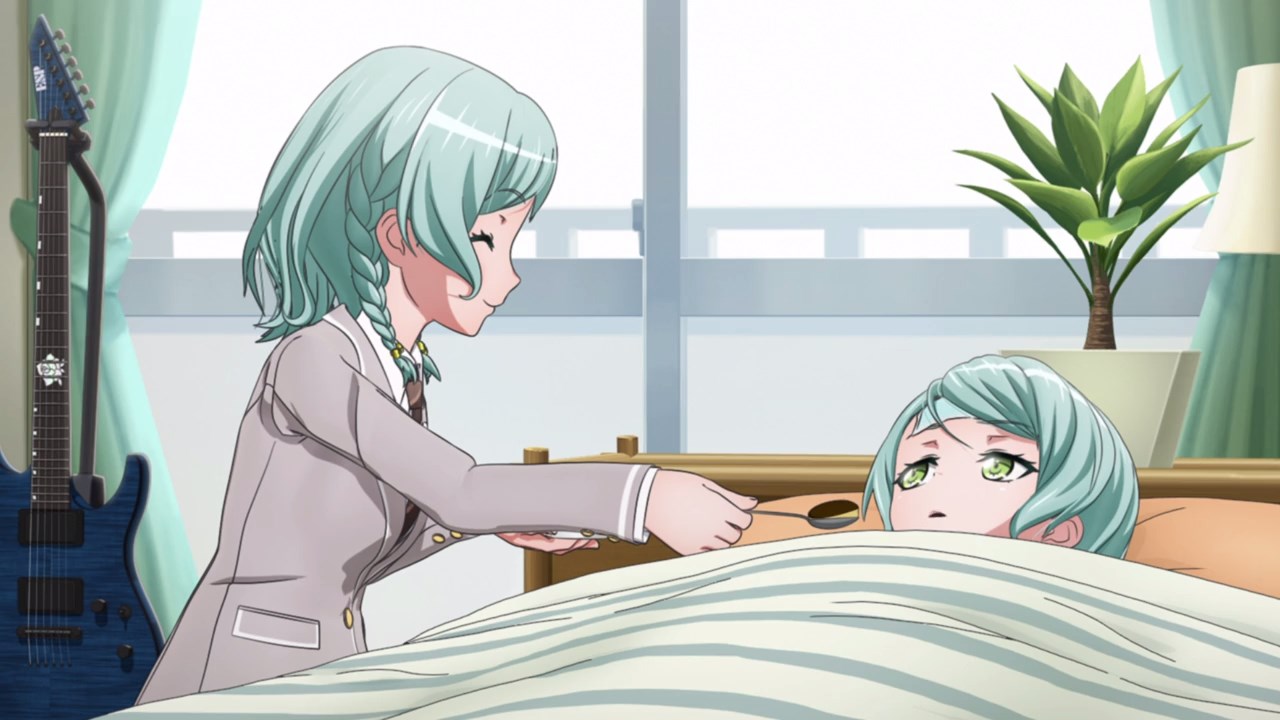 Good thing Hina is here to take care of her twin-sister because she really loves Sayo, although Sayo doesn’t want to be clingy to her boppin’ twin-sister Hina. 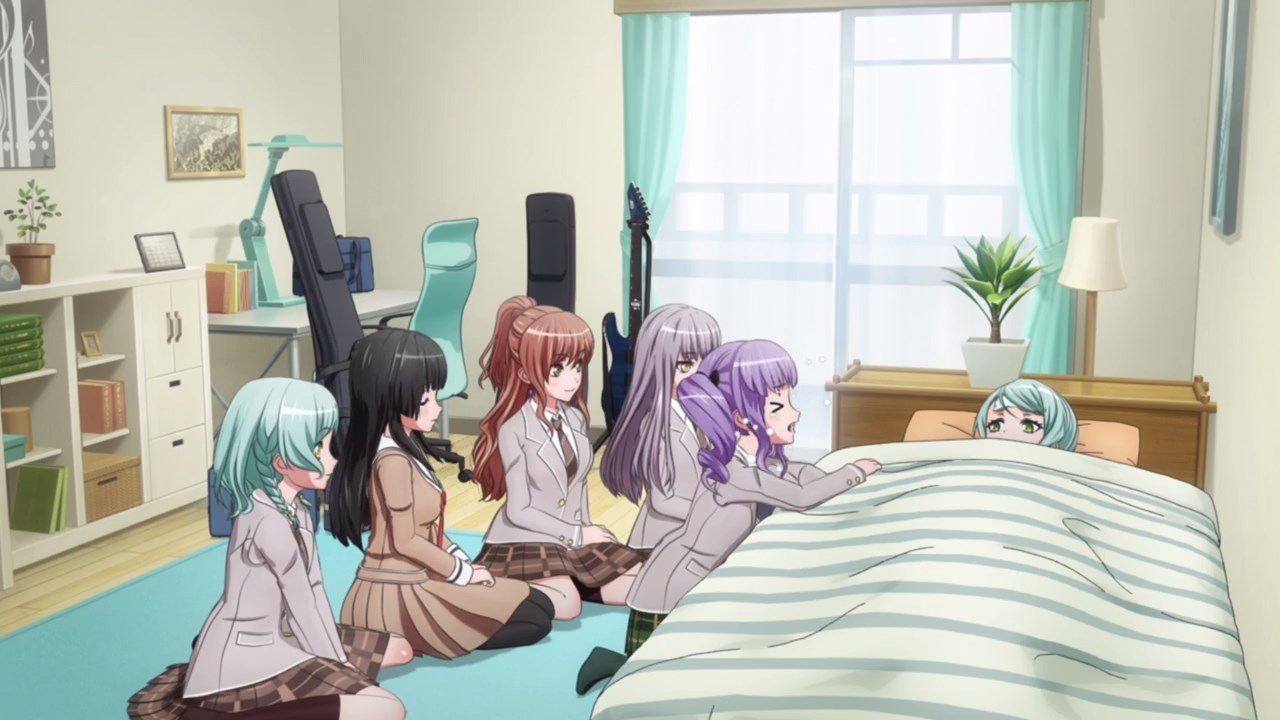 Also, the rest of Roselia is here to check their guitarist to see if she’s fine. I mean, Ako-chan is worried that Sayo might miss out on the upcoming Future World Fes.

Fortunately, Sayo Hikawa is doing fine and it’s all thanks to Yukina Minato and the rest of Roselia, as well as Hina Hikawa, for supporting her through these hard times. 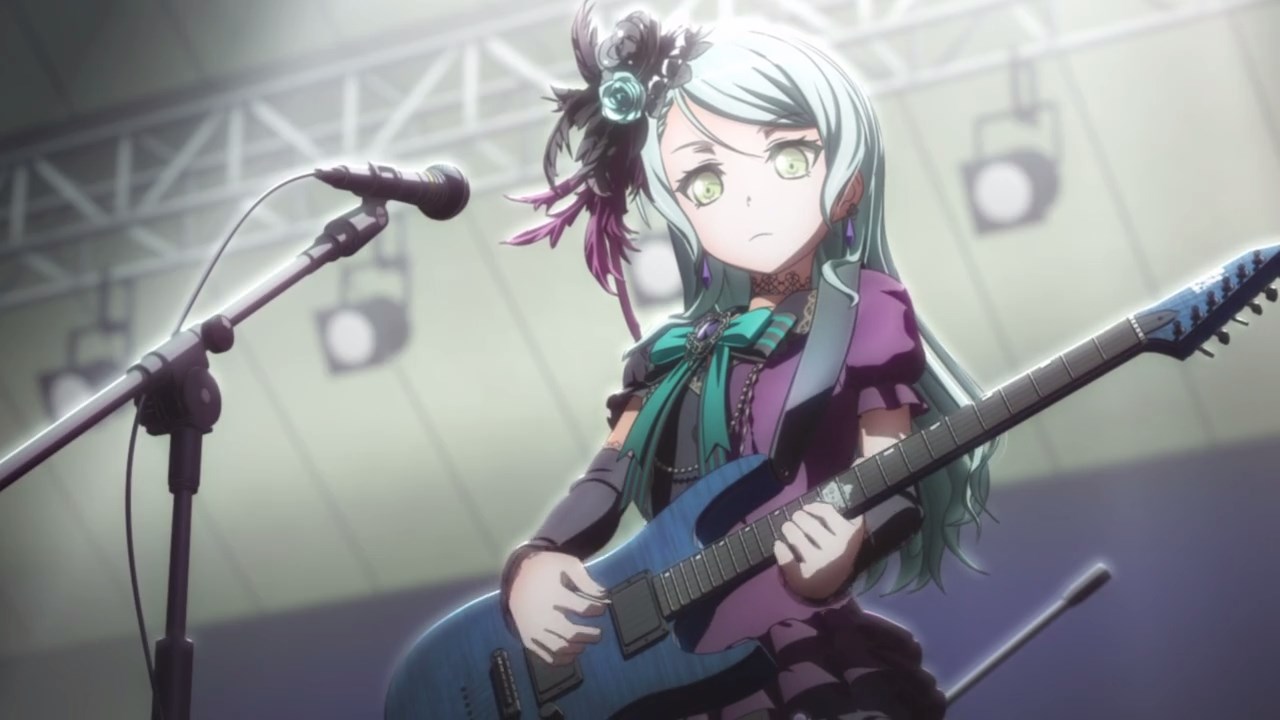 Anyways, Sayo Hikawa has finally recovered as she’s ready to rock the house down. 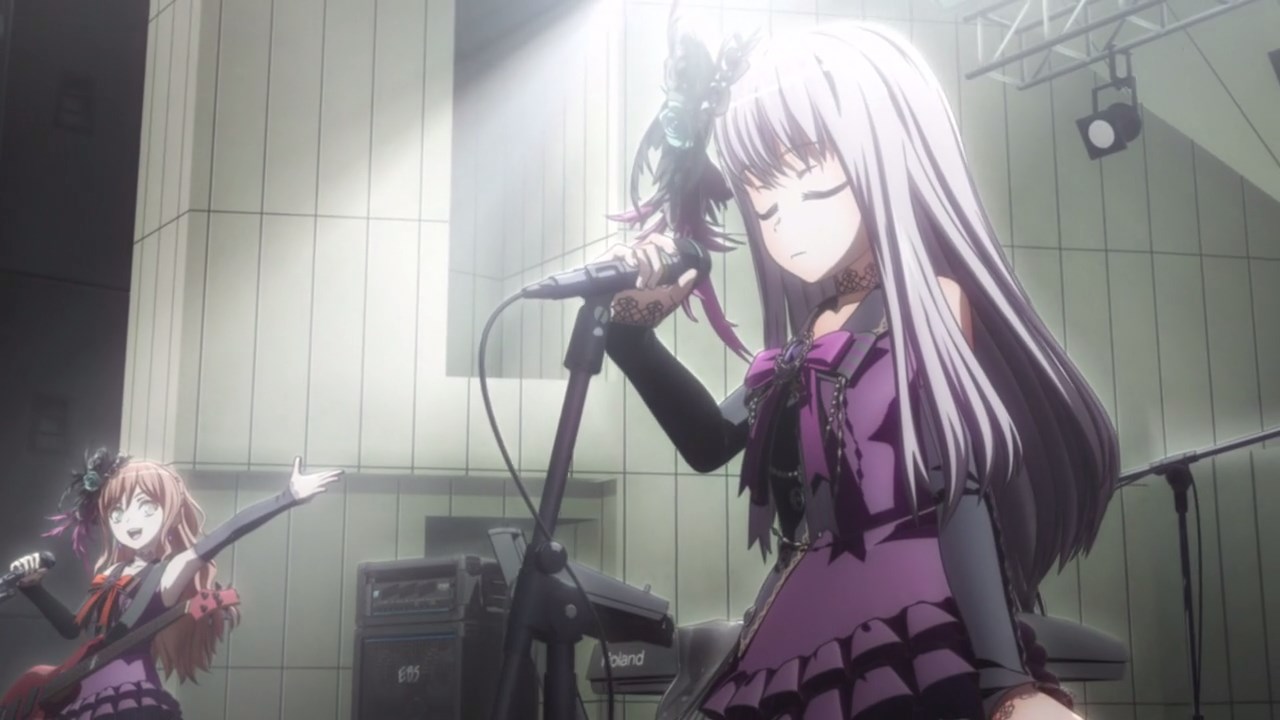 Speaking of Roselia, while they’re sitting pretty in 2nd place in BanG Dream! Girls Band Challenge, I think Yukina Minato and the rest will focus on Future World Fes which means that various girls bands will take that spot. 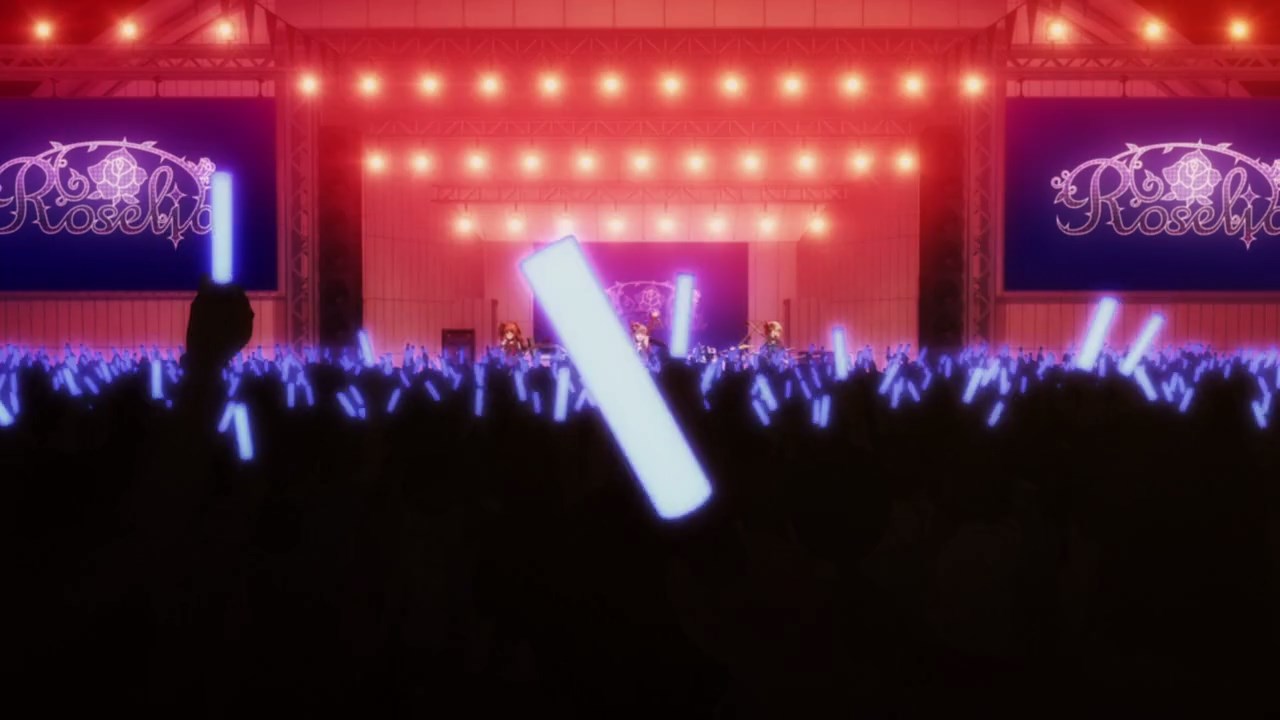 And so, I’ll leave this episode as Roselia performs “FIRE BIRD” at the Over the Future concert, which will be the lead-up concert for Future World Fes.

Now then, let’s hope that Poppin’ Party will get 2nd place so that Kasumi Toyama and the rest will perform at the Budokan! Anyways, I’ll see you next time.