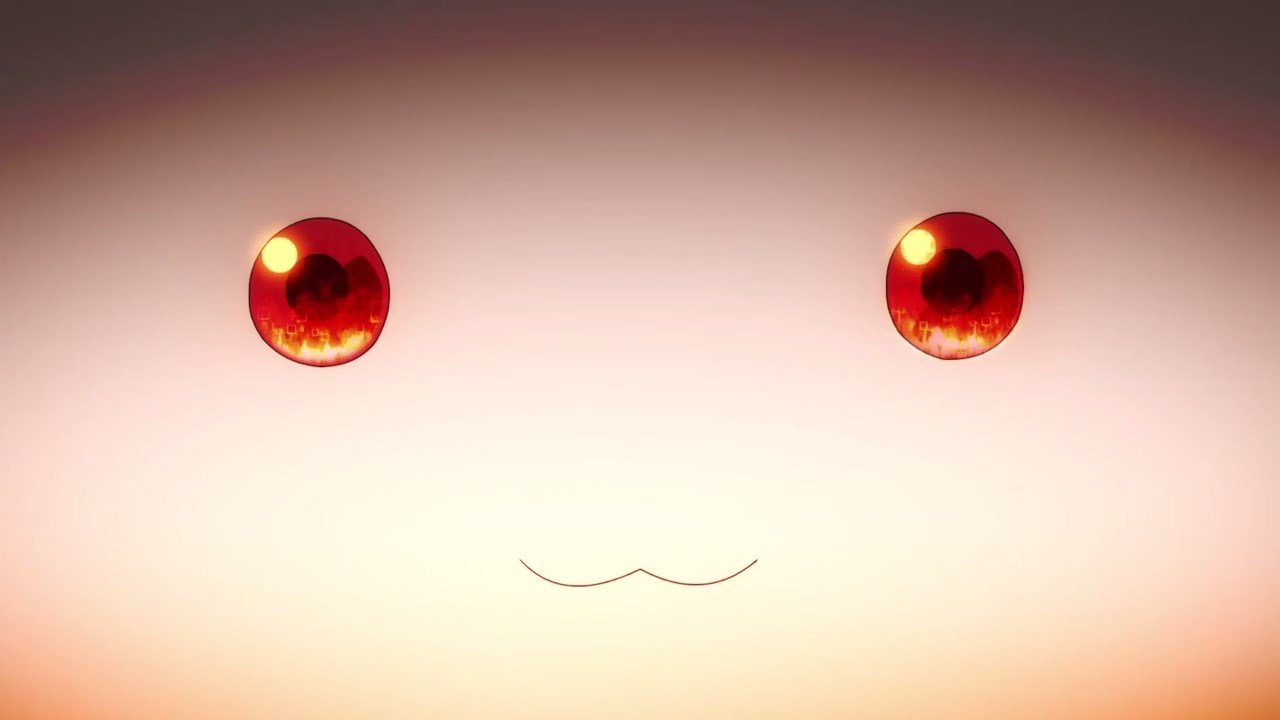 Well everyone, here’s Kyubey and its infamous stare, offering contracts to countless girls to gain magic and fight witches. Oh, and it’s gets even scarier when the reflection of its eyes has flames after seeing a house being burned down.

In any case, this is how Felicia Mitsuki became a magical girl after seeing her parents killed by a witch, vowing that she’ll eliminate them! 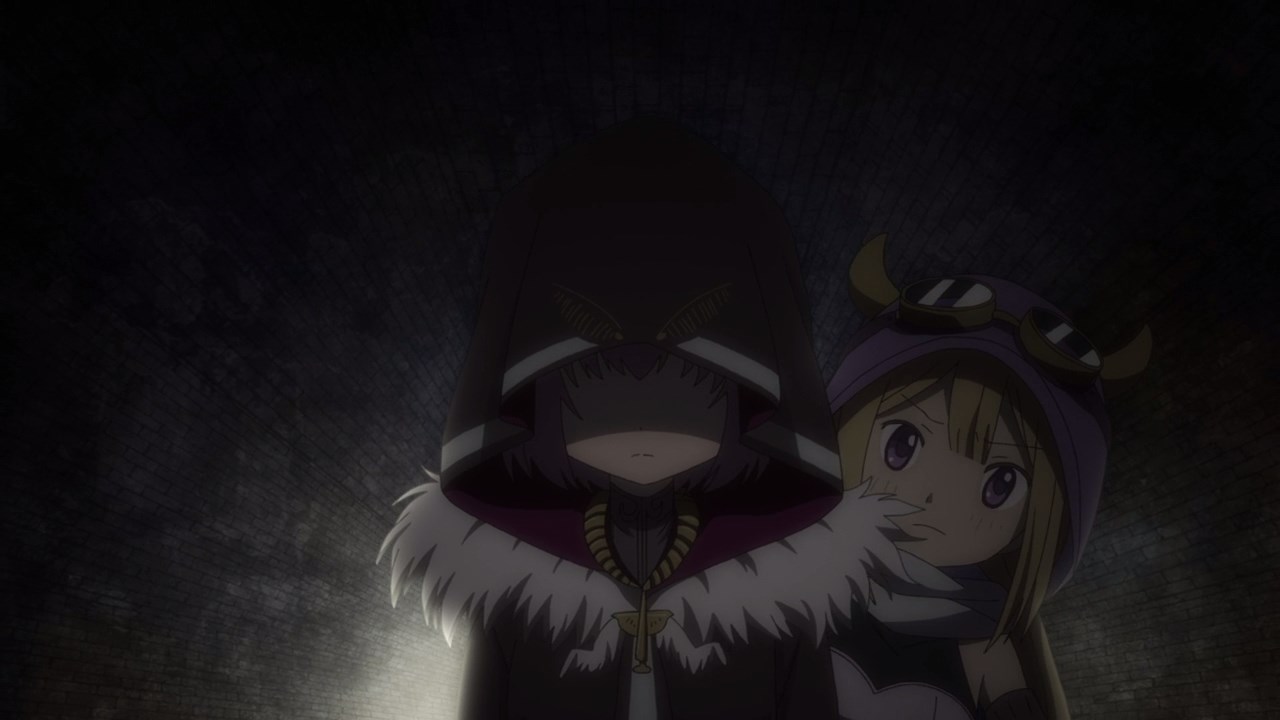 And speaking of Felicia Mitsuki, looks like she went to a secret facility being owned by Magius or should I say The Wings of Magius. 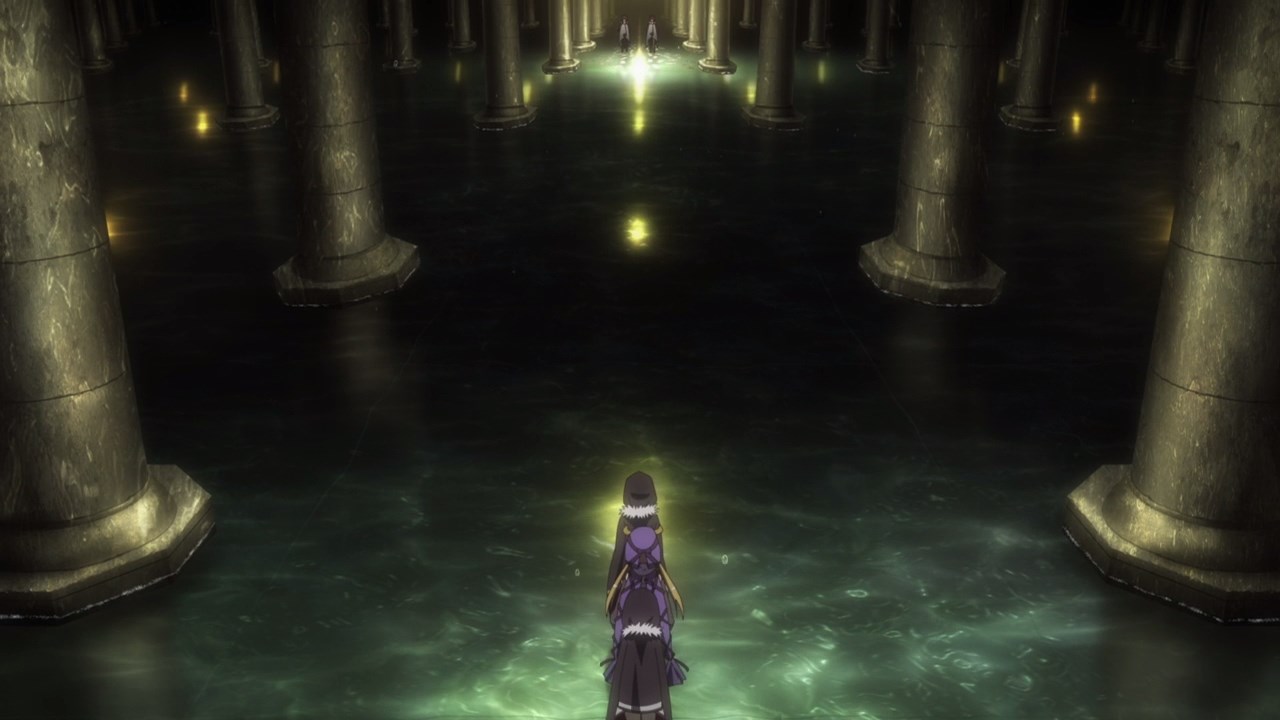 Anyways, Felicia has finally arrived at The Wings of Magius’ secret facility where she’ll meet with the Amane sisters, Tsukuyo and Tsukasa. 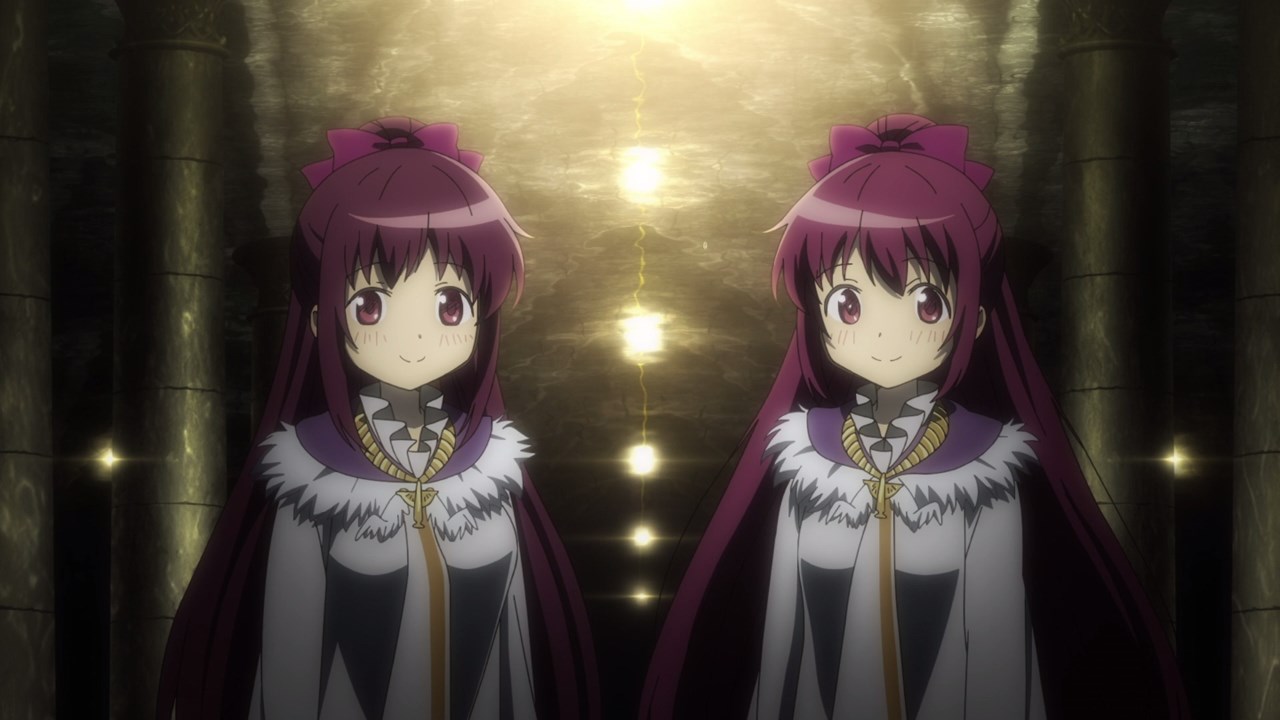 And here’s the Amane sisters in which they explain the Felicia that their organization aims to eliminate all witches and liberate the magical girls. Of course, Tsukuyo and Tsukasa added that they need to protect the rumors in Kamihama City. Oh yeah, those rumors are manifested into monsters called Uwasa, which it’s linked to witches. 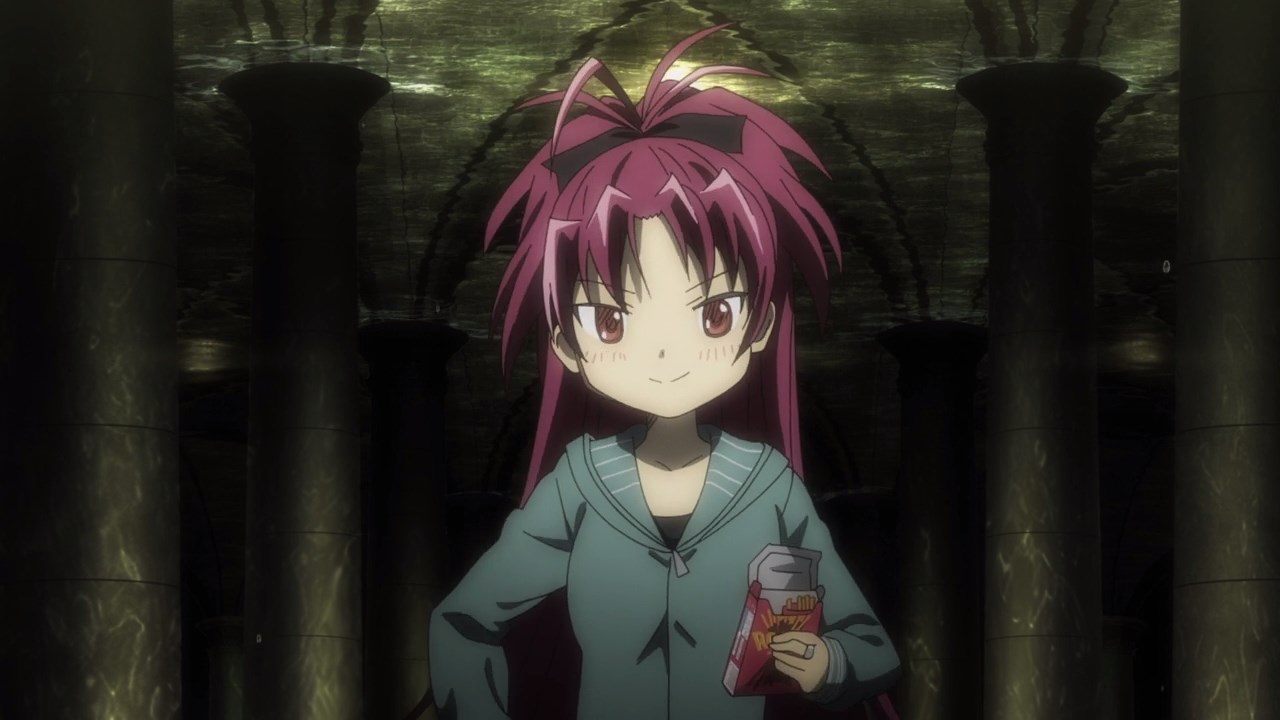 Said magical girl happened to be Kyouko Sakura and I was wondering if she decided to ditch her cooperation with the Coordinator in favor of joining The Wings of Magius? Still, joining that organization is a bad omen waiting to happen. 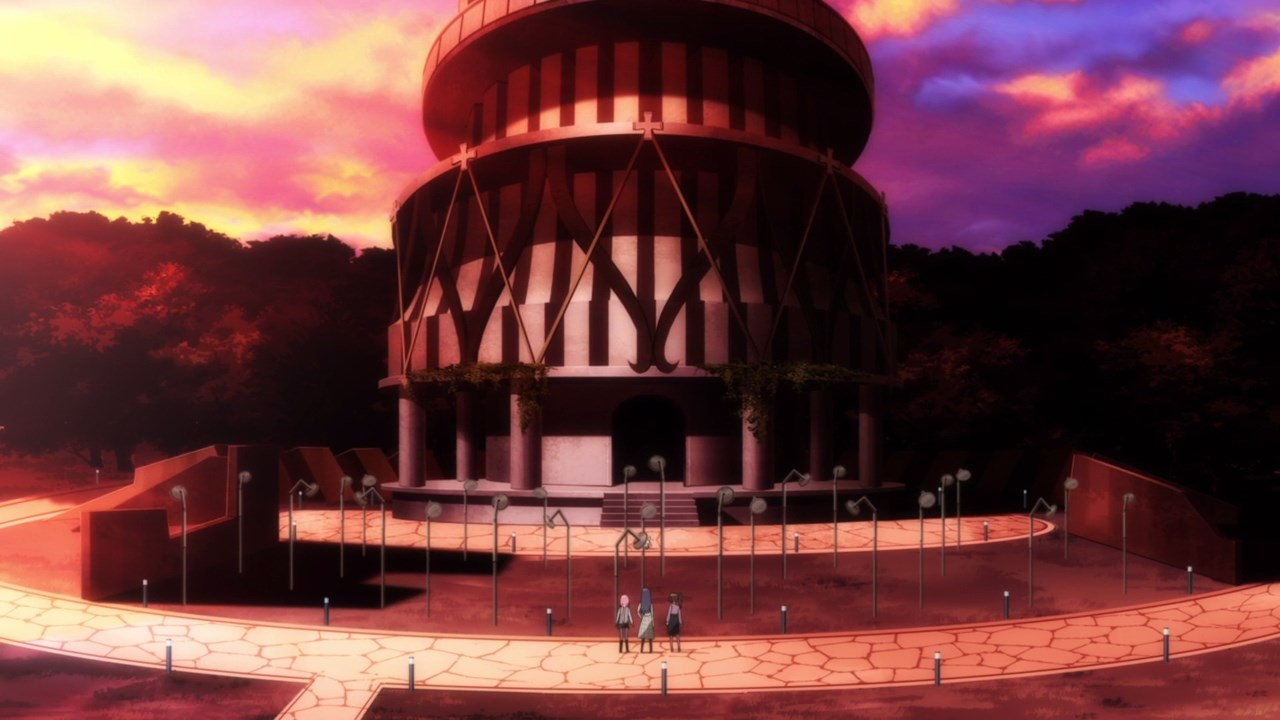 Meanwhile, Iroha Tamaki and the rest are here at the building where The Wings of Magius resides there. 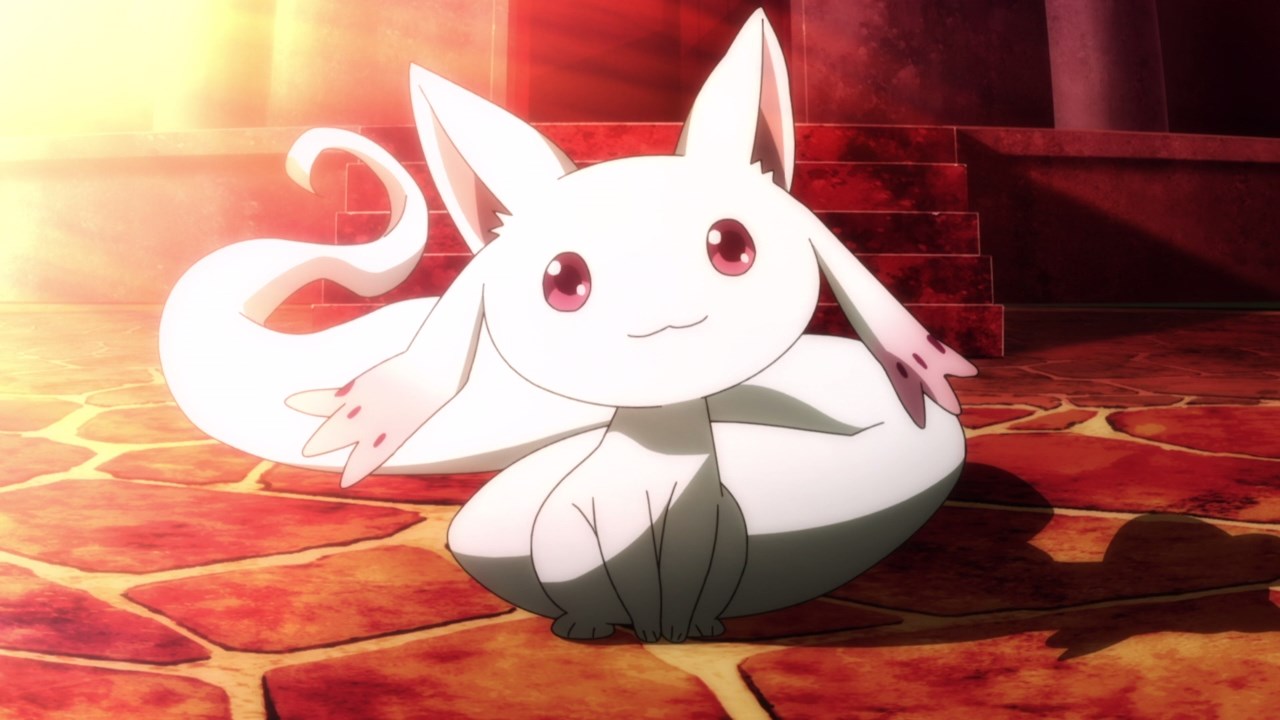 Also, Lil’ Kyubey is here as something bad will happen inside the building. I mean, you may never know when will the Uwasa occur. 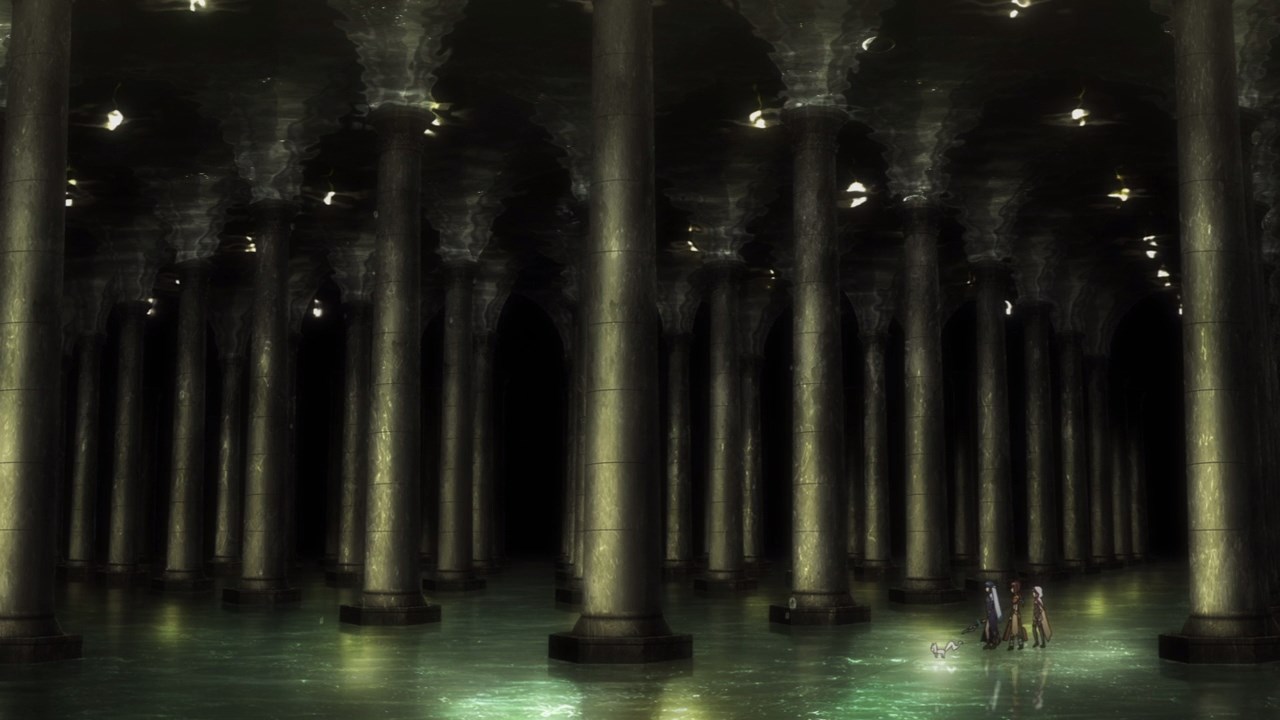 Now then, the magical girls are now inside The Wings of Magius’ secret facility but Iroha and the rest should be careful ’cause they might get attacked by other magical girls… 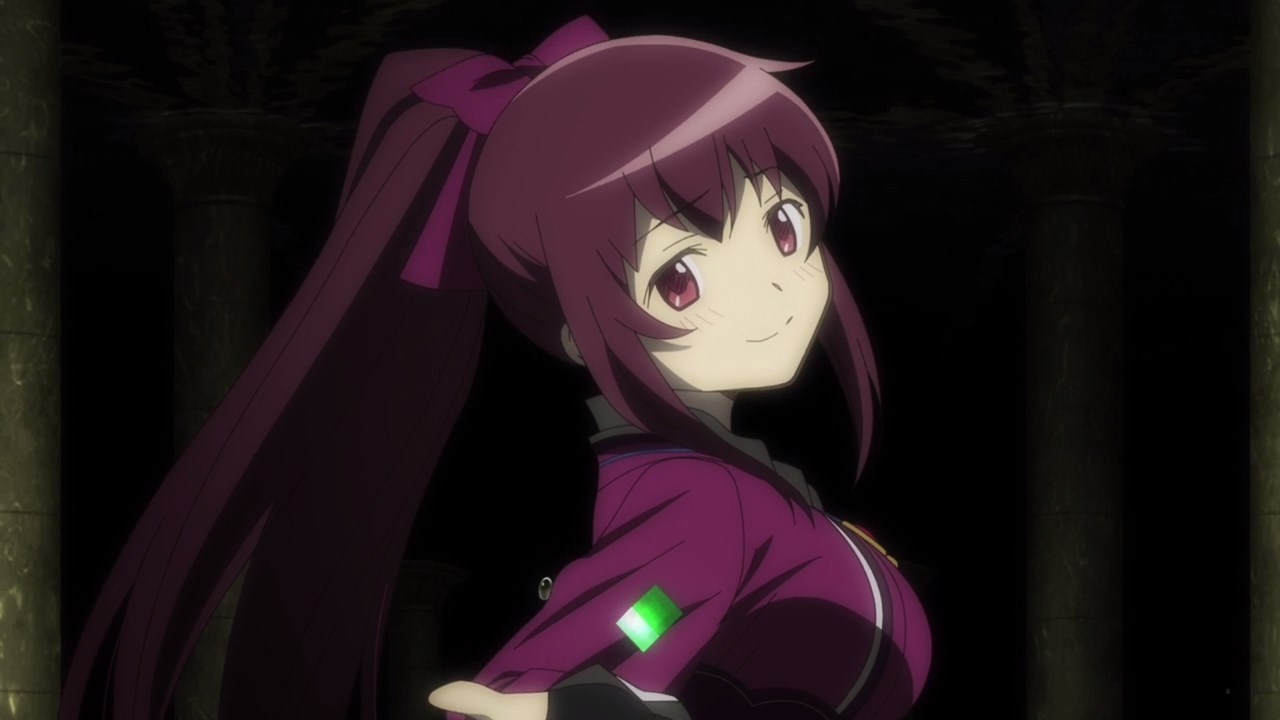 …like Tsukuyo and Tsukasa Amane for example where the sisters launched a surprise attack on the magical girls. 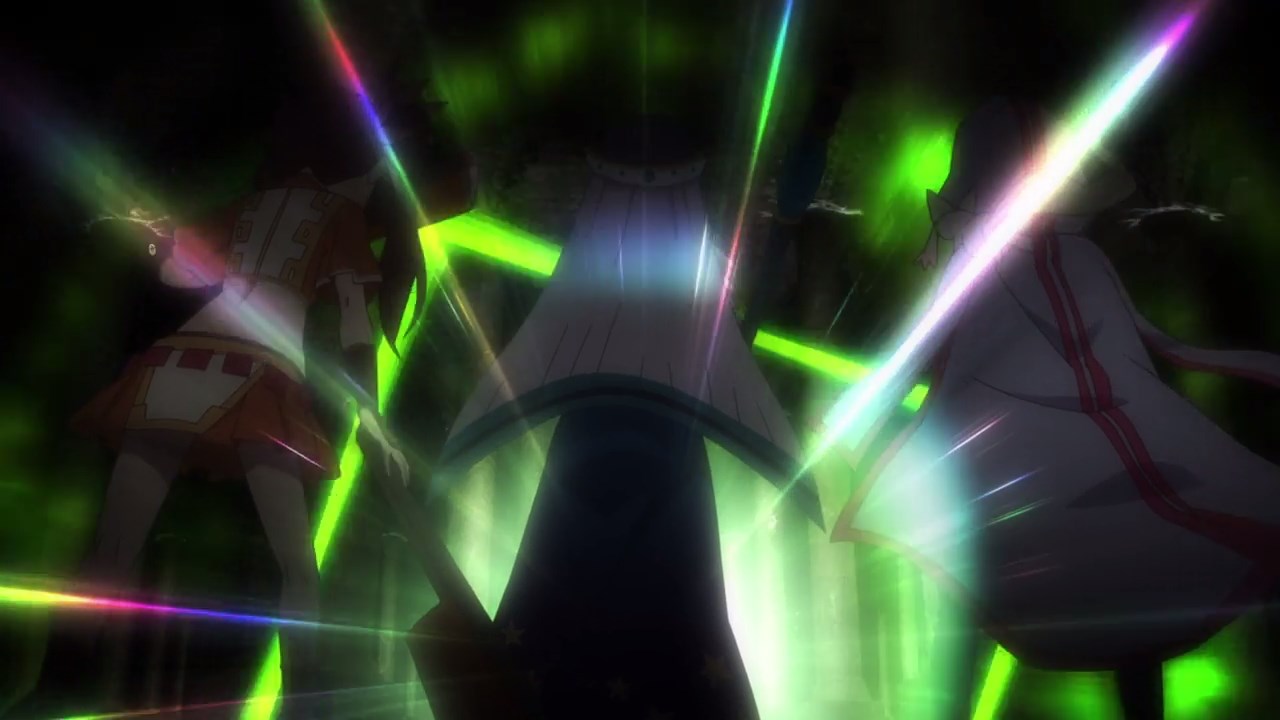 However, the Amane sisters decided to send these magical girls into another dimension. 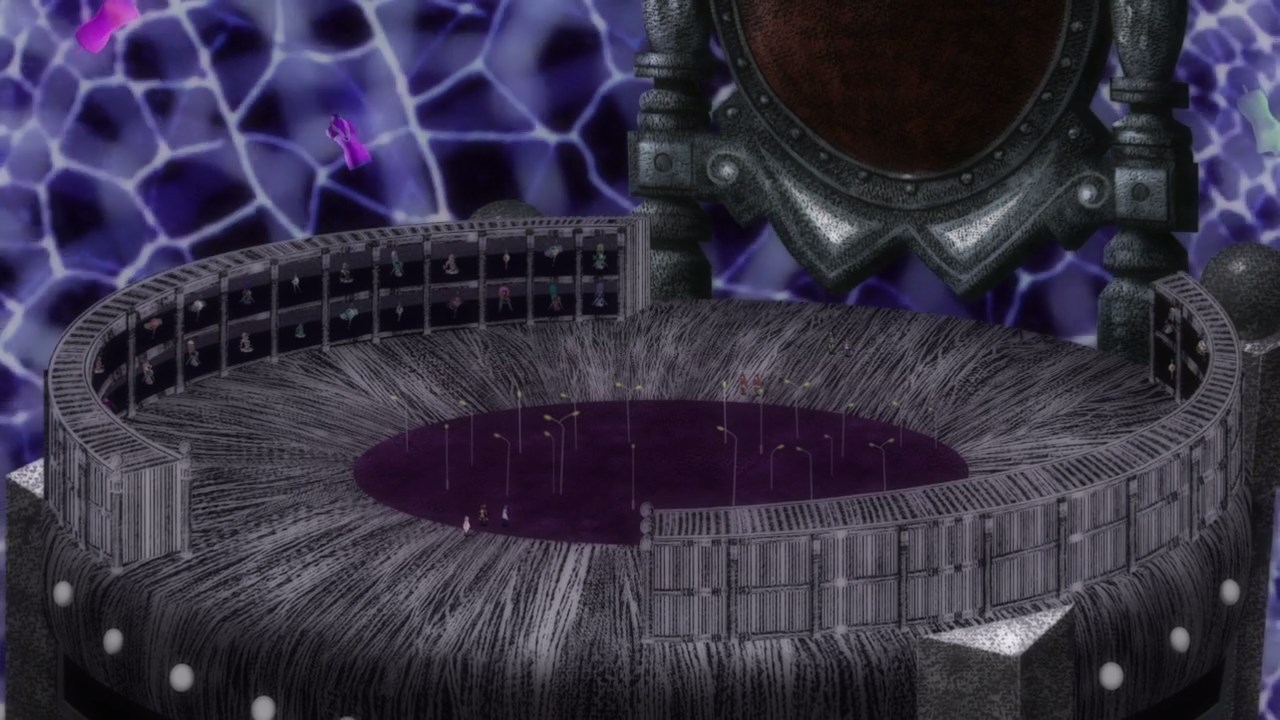 Oh yeah, and this dimension is full of witches where Tsukuyo and Tsukasa control them. 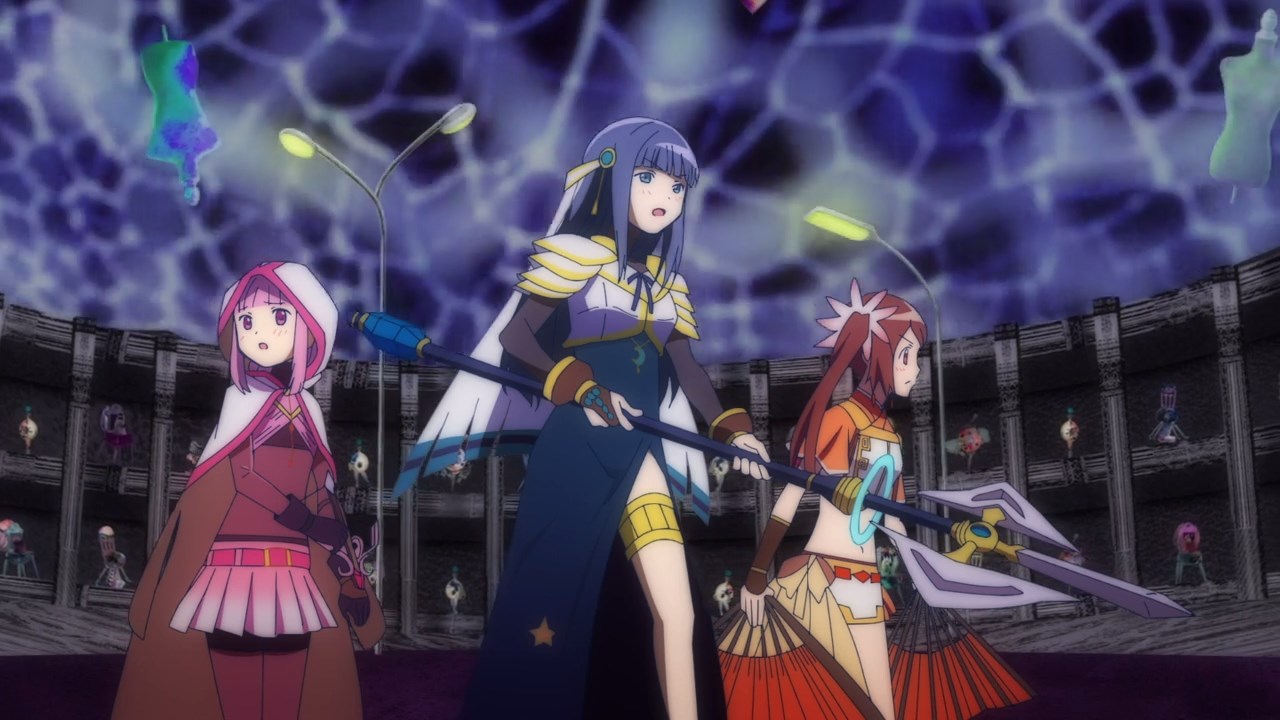 For Yachiyo Nanami and the rest, they can’t believe that the sisters (and The Wings of Magius by extension) have the power to control witches.

And speaking of witches, there’s one person who really hates witches with a passion… 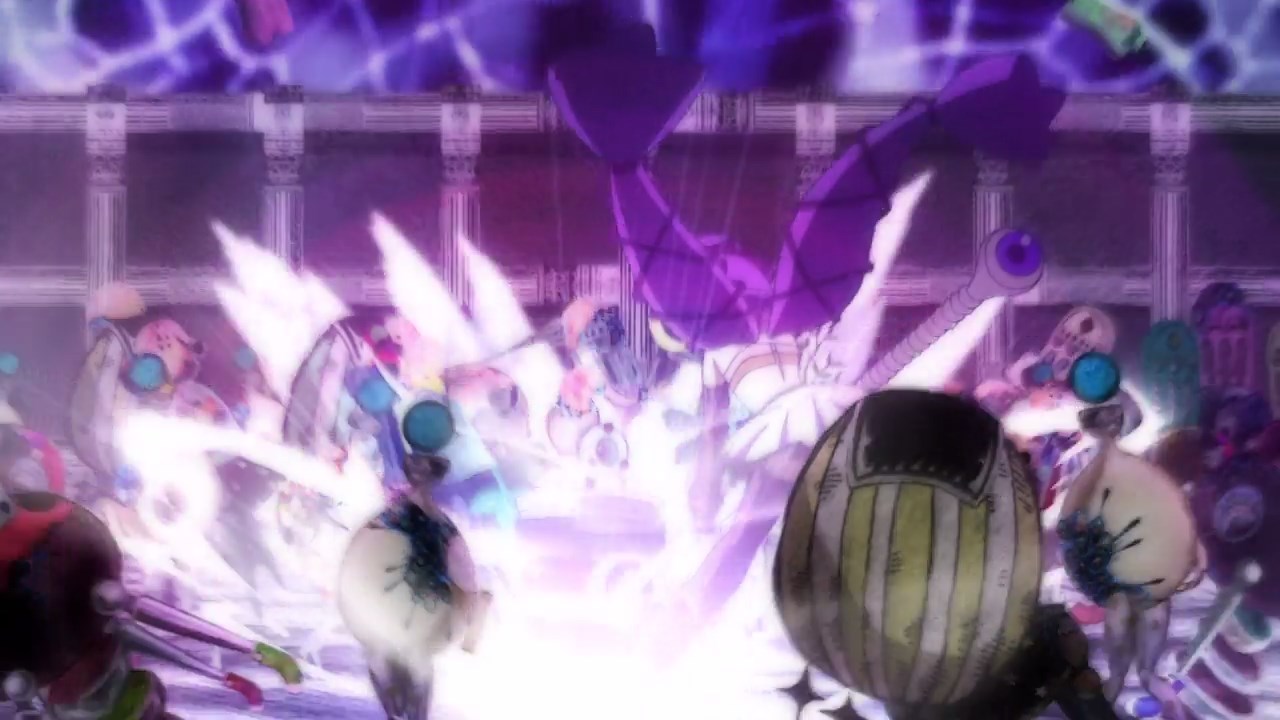 Well, seems that she realized that joining The Wings of Magius is a bad idea as everyone is controlling witches. 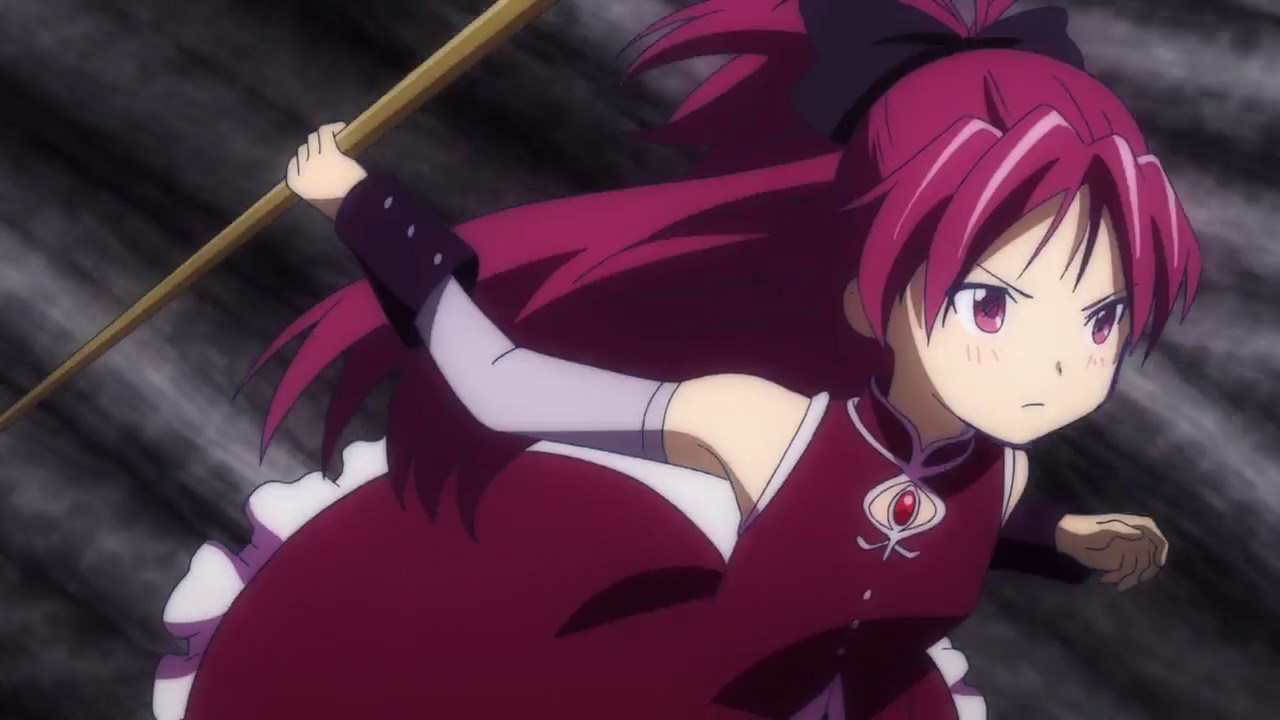 Meanwhile, looks like Kyouko Sakura changed her mind on joining Magius as she throw a spanner at the organization’s machinations. 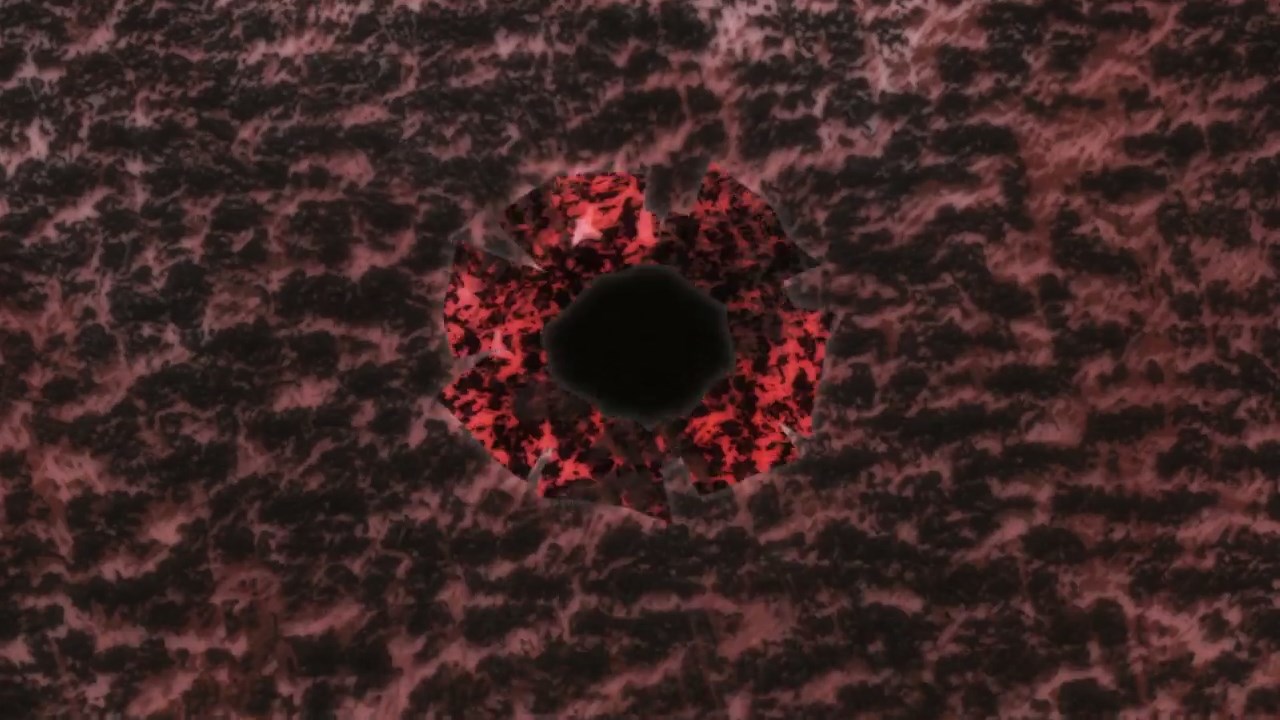 Well, Kyouko throw her spear in which it creates a hole. Could it be that this hole leads to the Uwasa of the Lucky Owl Water? 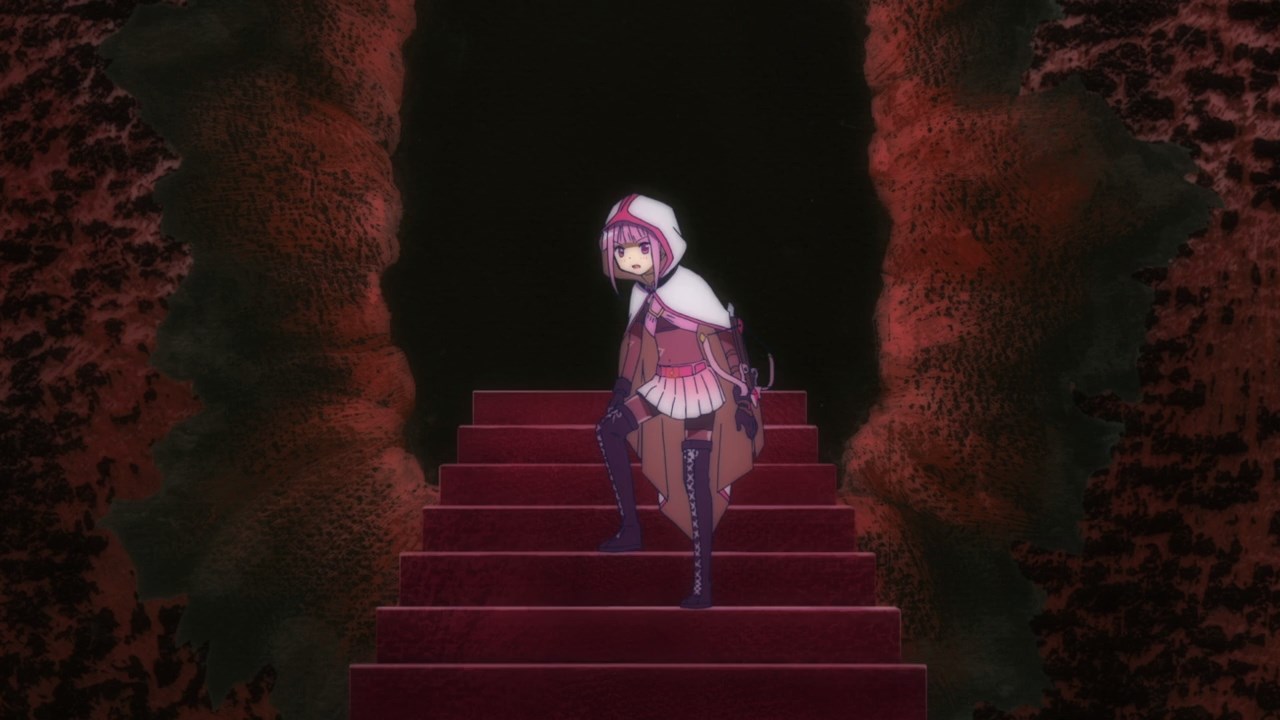 In any case, it’s time for Iroha Tamaki to go inside the hole and stop the Uwasa by herself. Let’s hope that she’ll be okay! 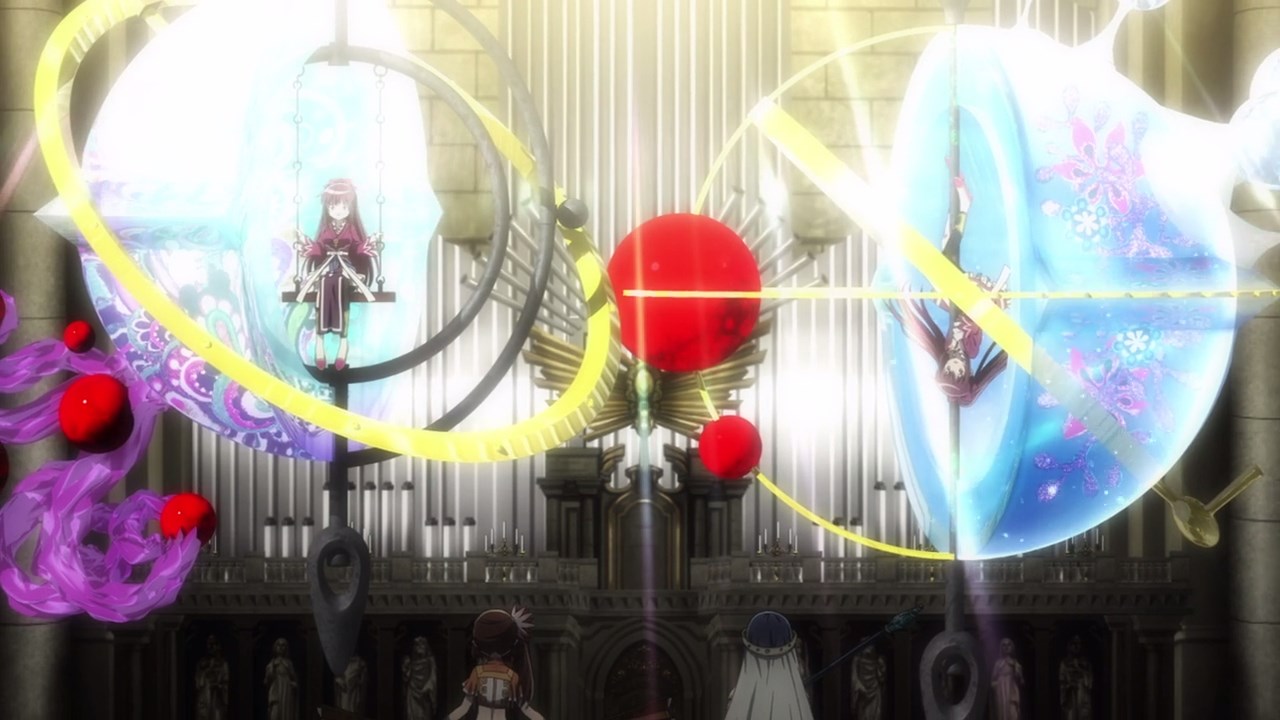 Meanwhile, the Amane sisters have decided to transform themselves into witches just to obliterate their opponents.

I’m not sure if Tsukuyo and Tsukasa can control their witch form, but Yachiyo and the rest should be careful when dealing with the sisters. 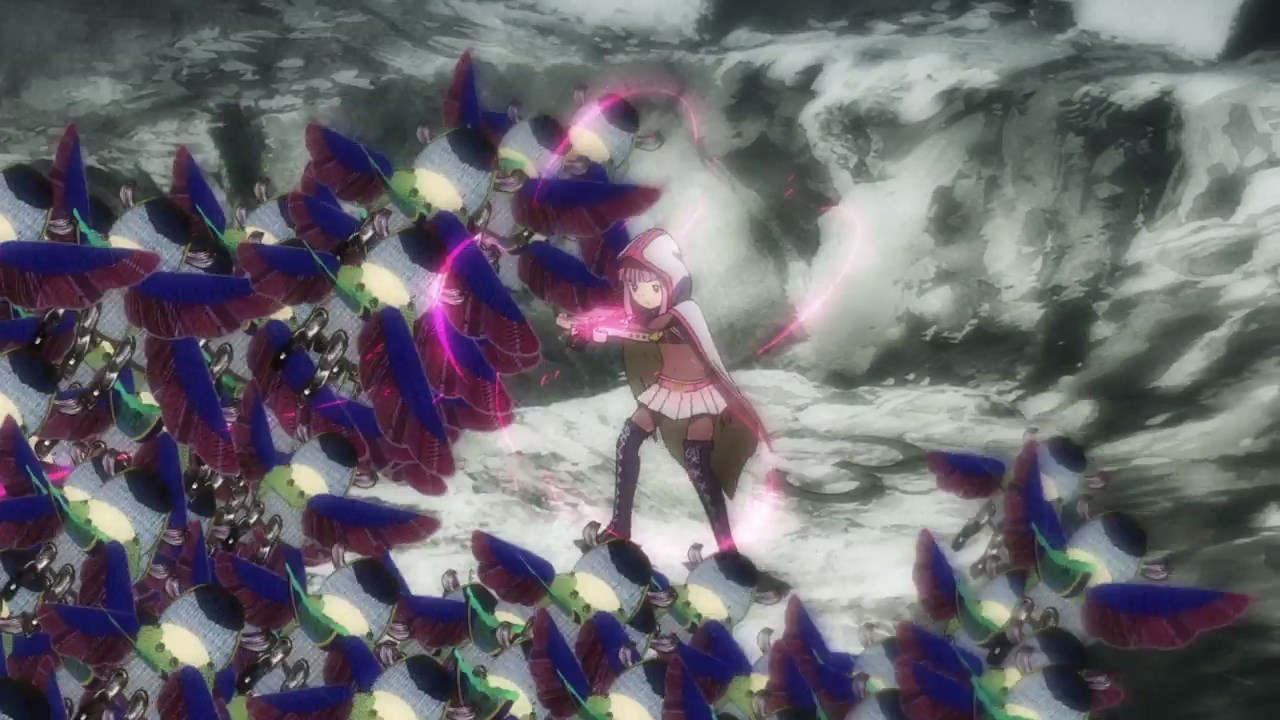 Now then, let’s go back to Iroha Tamaki where she tries to destroy the Uwasa of the Lucky Owl Water after entering the hole.

Problem is that the Uwasa is so relentless that Iroha couldn’t keep it up. Heck, she might even die! 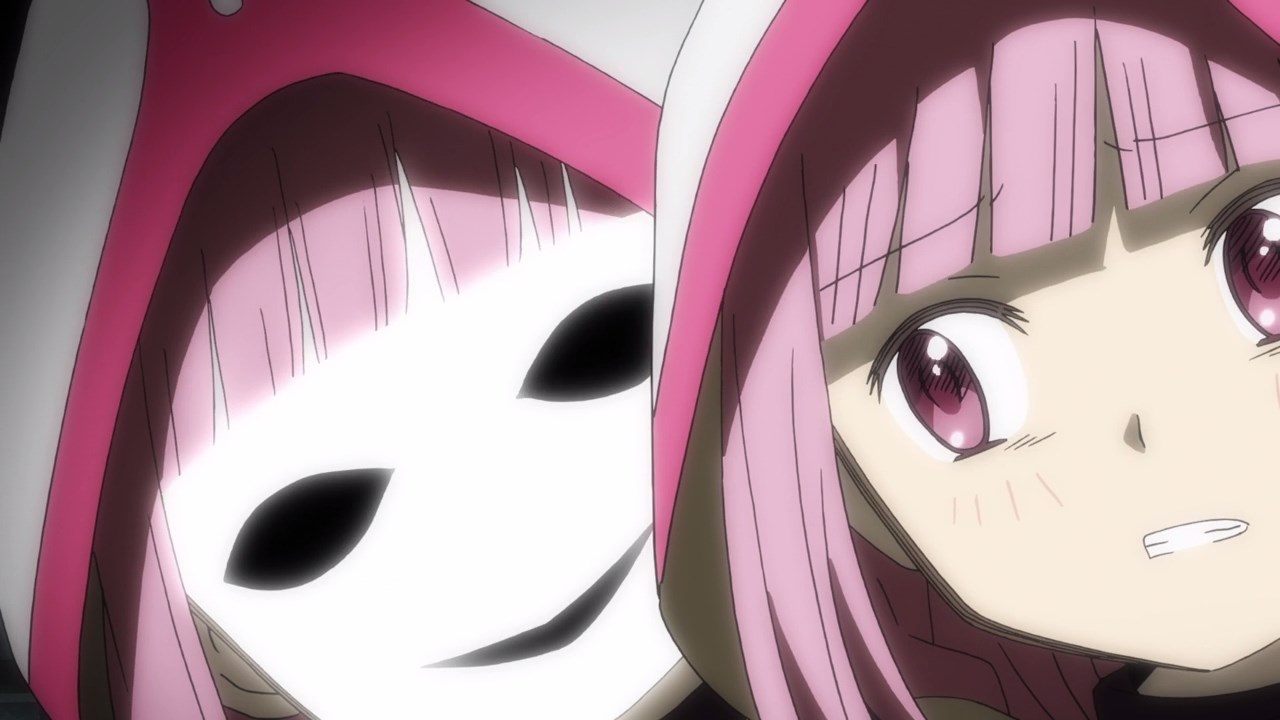 But you know what, Iroha Tamaki should give into despair and become a witch in order to destroy the Uwasa. I mean, her witch self encourage Iroha to do so. 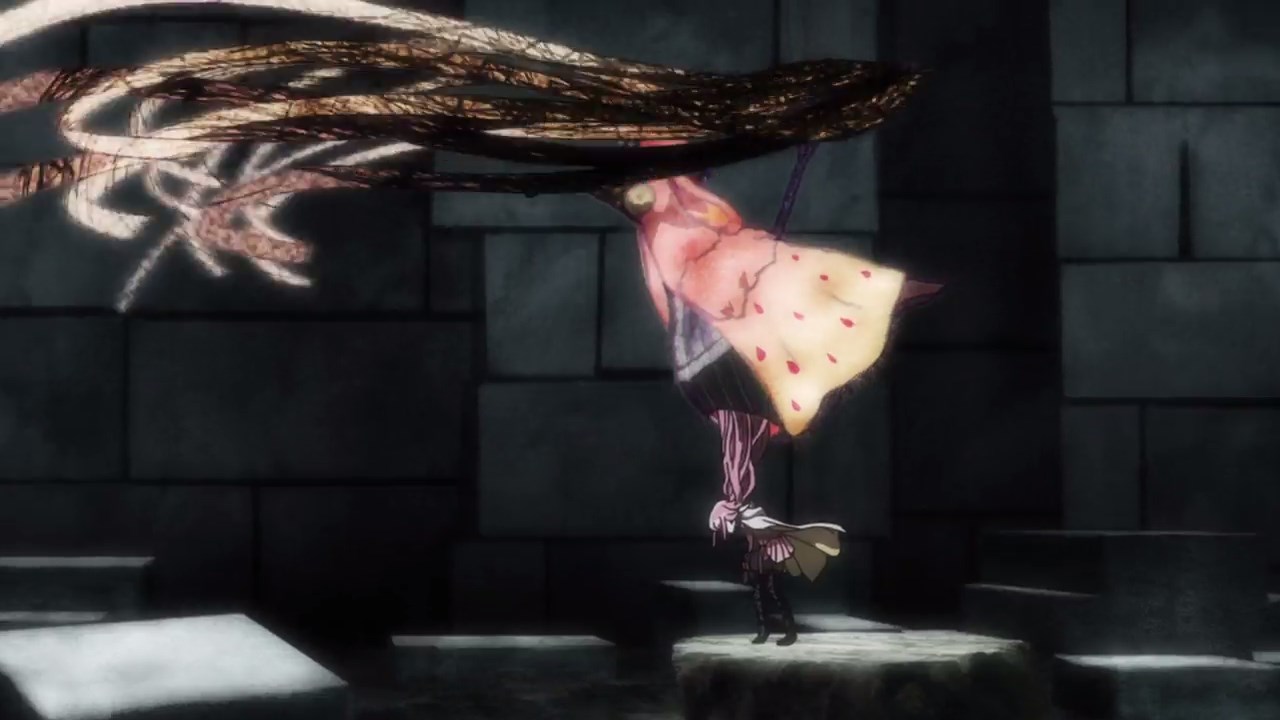 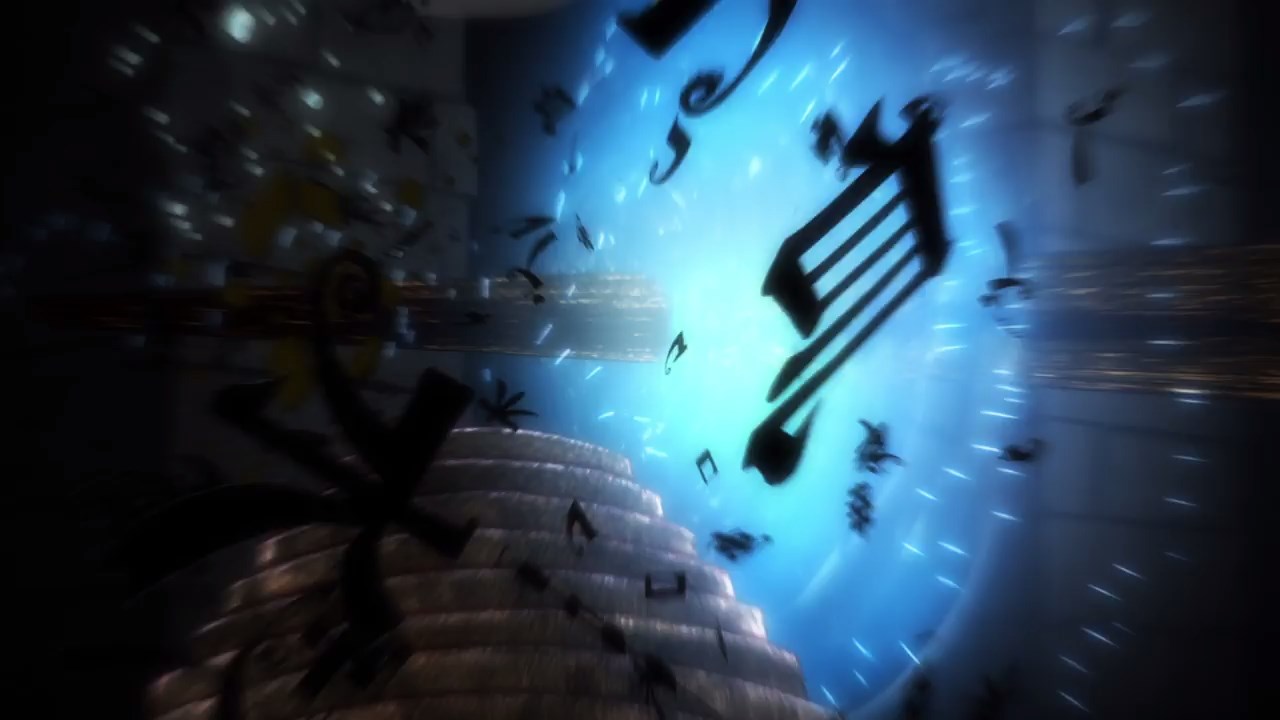 In any case, Iroha Tamaki transforms into her witch form and destroys the Uwasa of the Lucky Owl Water.

Of course, destroying the Uwasa will have consequences as she’ll have lots of misfortune afterwards. 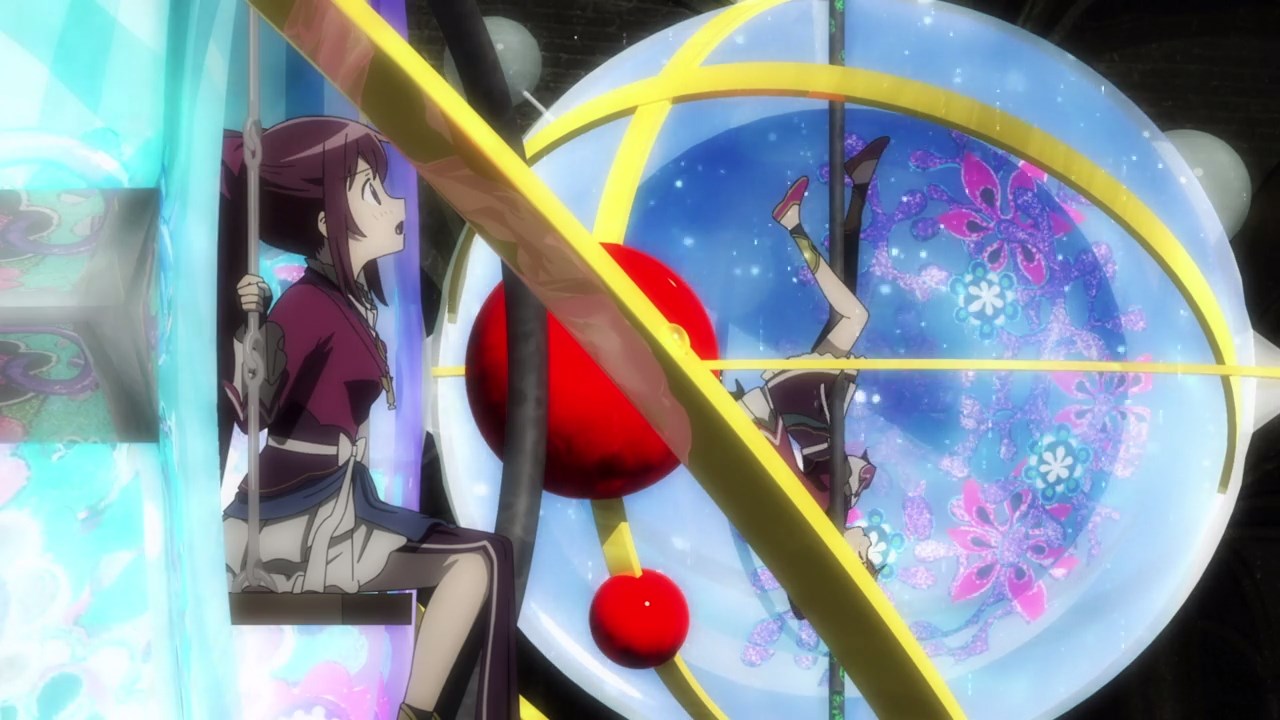 But thanks to Iroha’s meddling (with some help from Kyouko), Tsukuyo and Tsukasa realized that their Uwasa has fallen.

This means that Magius’ source to recruit various magical girls is gone and the Amane sisters are really angry about it! 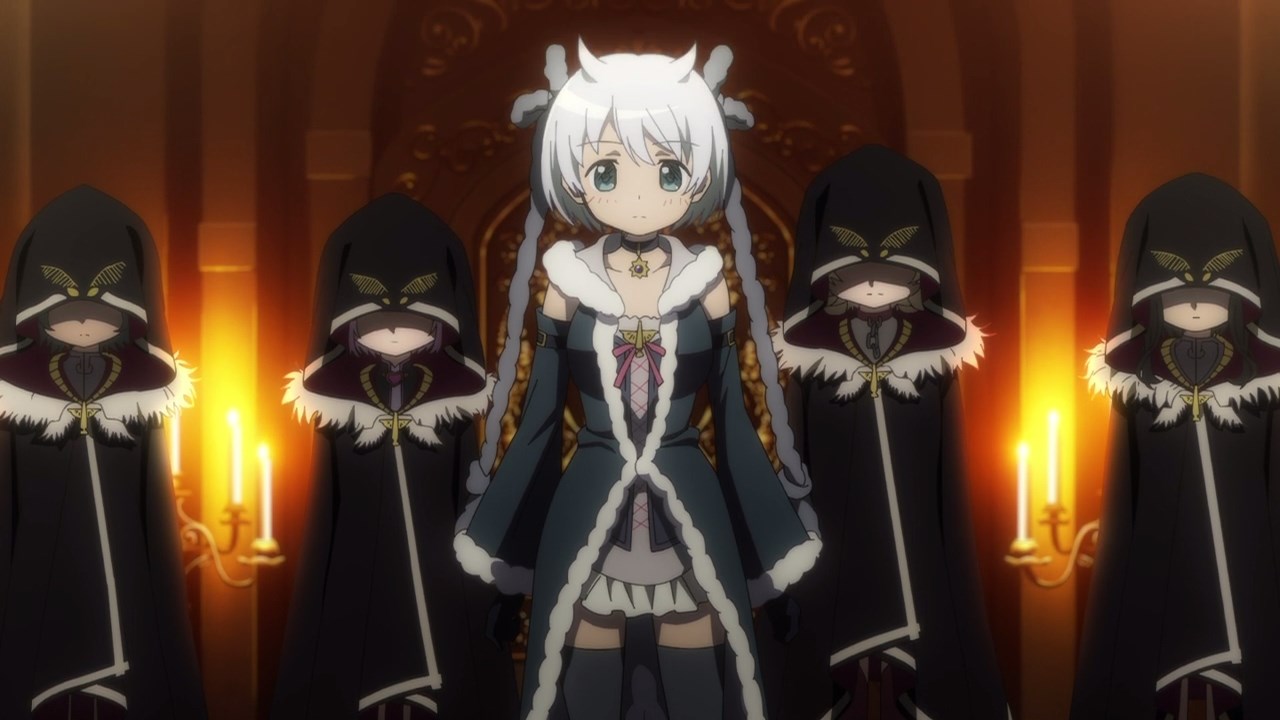 On the other hand, seems that someone heard the loud commotion and went there to check it out.

Then again, Yachiyo Nanami is shocked that the real Mifuyu Azusa has appeared in front of her, not to mention that she’s with The Wings of Magius. 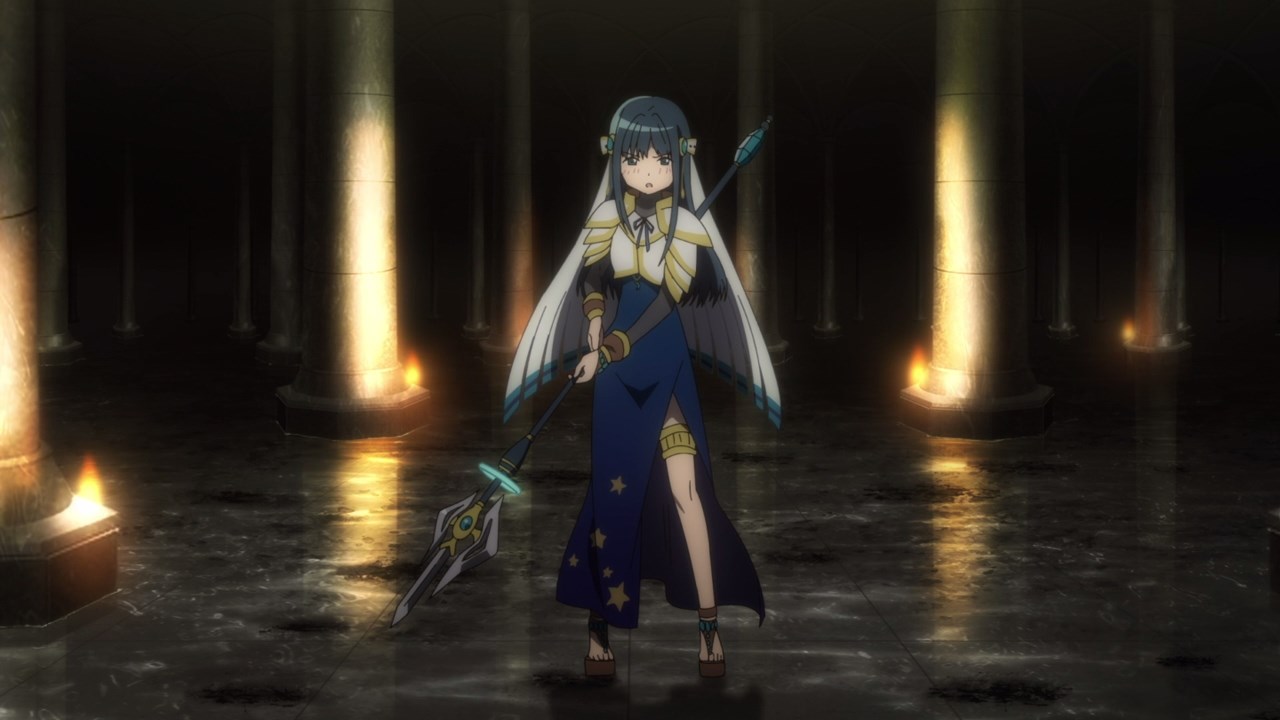 But now that Yachiyo has finally found her friend for a long time, she told Mifuyu to come back to her.

Unfortunately for Azusa, it’s complicated as Mifuyu won’t leave The Wings of Magius because she has something important to do like saving magical girls from this cursed fate of fighting witches.

In fact, Mifuyu Azusa asked her best friend to join the organization, but Yachiyo Nanami refused to do so because she feels that The Wings of Magius has some ulterior motives. 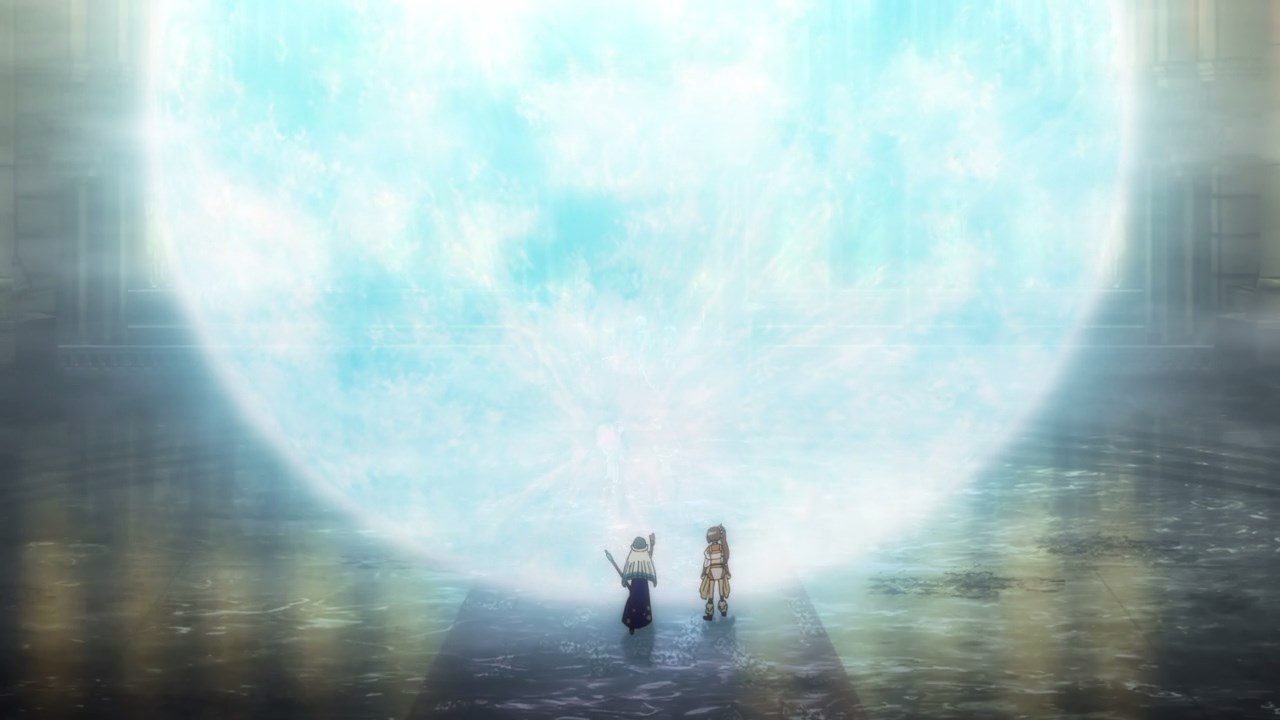 And because of that disagreement between two friends, looks like Mifuyu Azusa left the scene as she created a ball of light to distract Yachiyo Nanami. Of course, I’m sure that they’ll meet again someday… 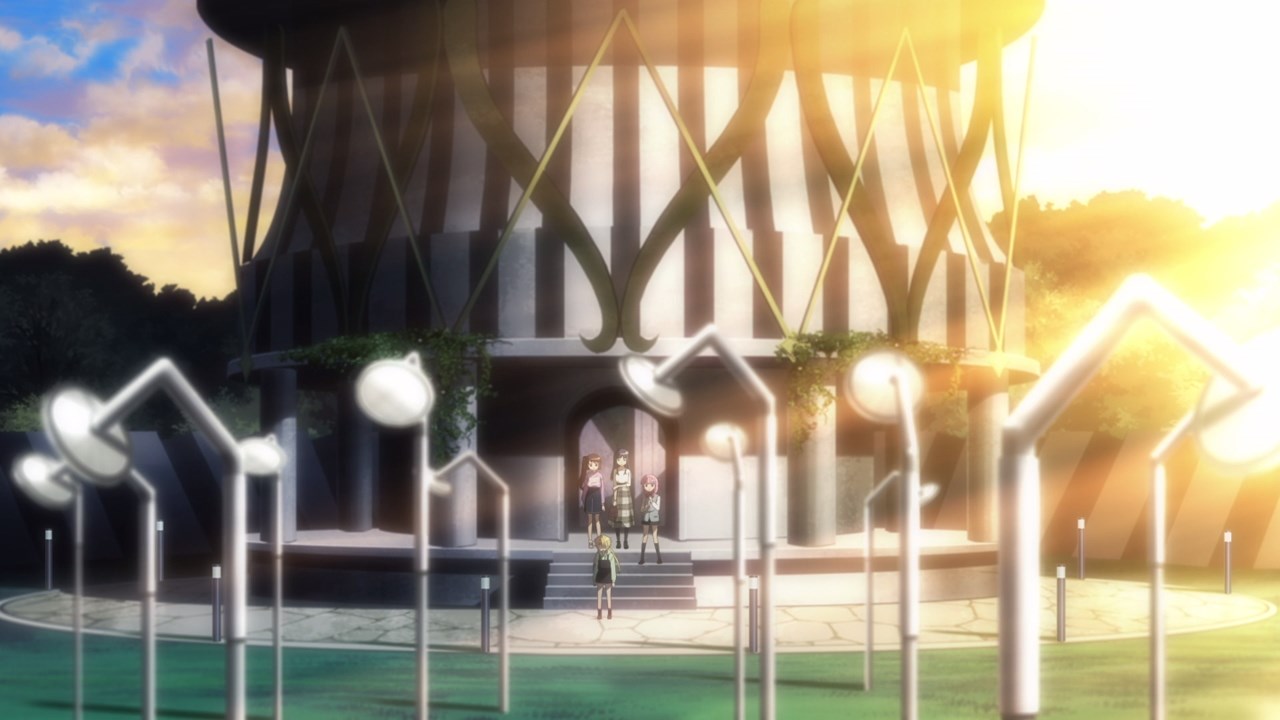 Now then, looks like the magical girls are done crushing the Uwasa of the Lucky Owl Water as they’ll head home. 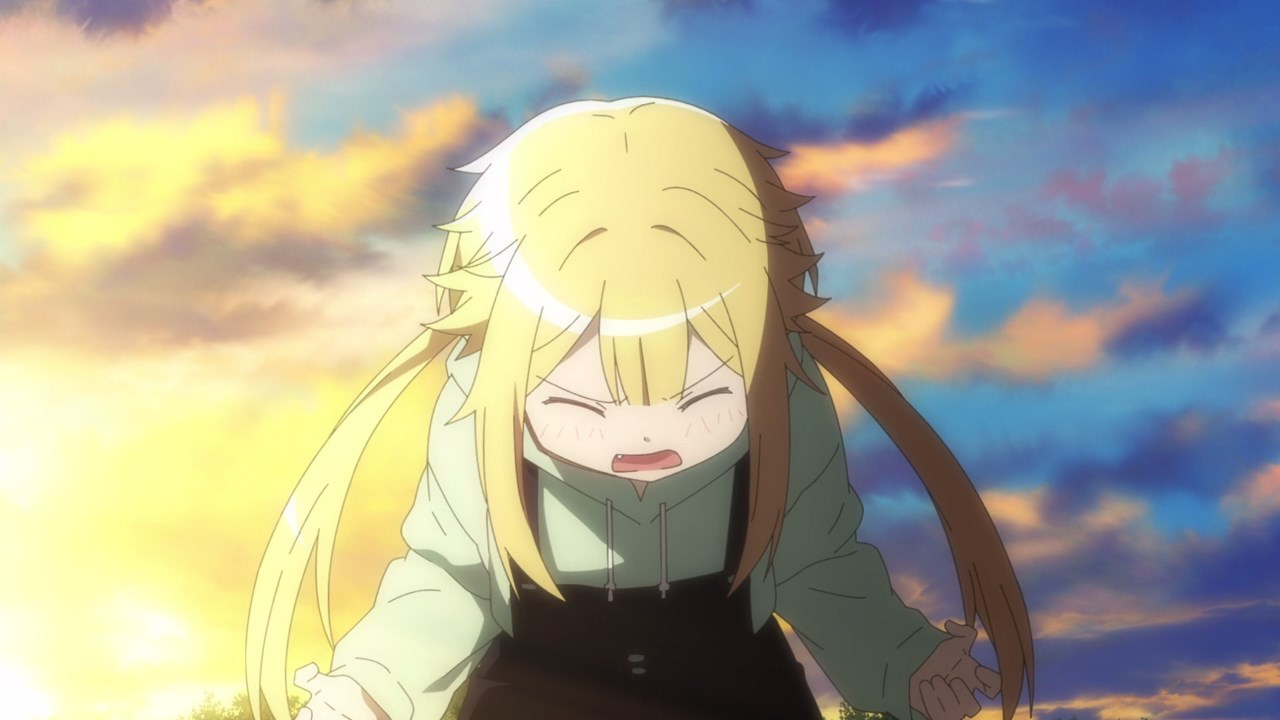 Well, except for Felicia Mitsuki where she doesn’t have a place to stay because her parents are dead, and let’s just say that she’s a hindrance to Yachiyo and the rest for her vendetta against witches.

Man, she’s being so negative to herself ever since her hatred of witches has finally peaked when The Wings of Magius can control witches. Let’s hope that Felicia won’t learn about magical girls transforming into witches. 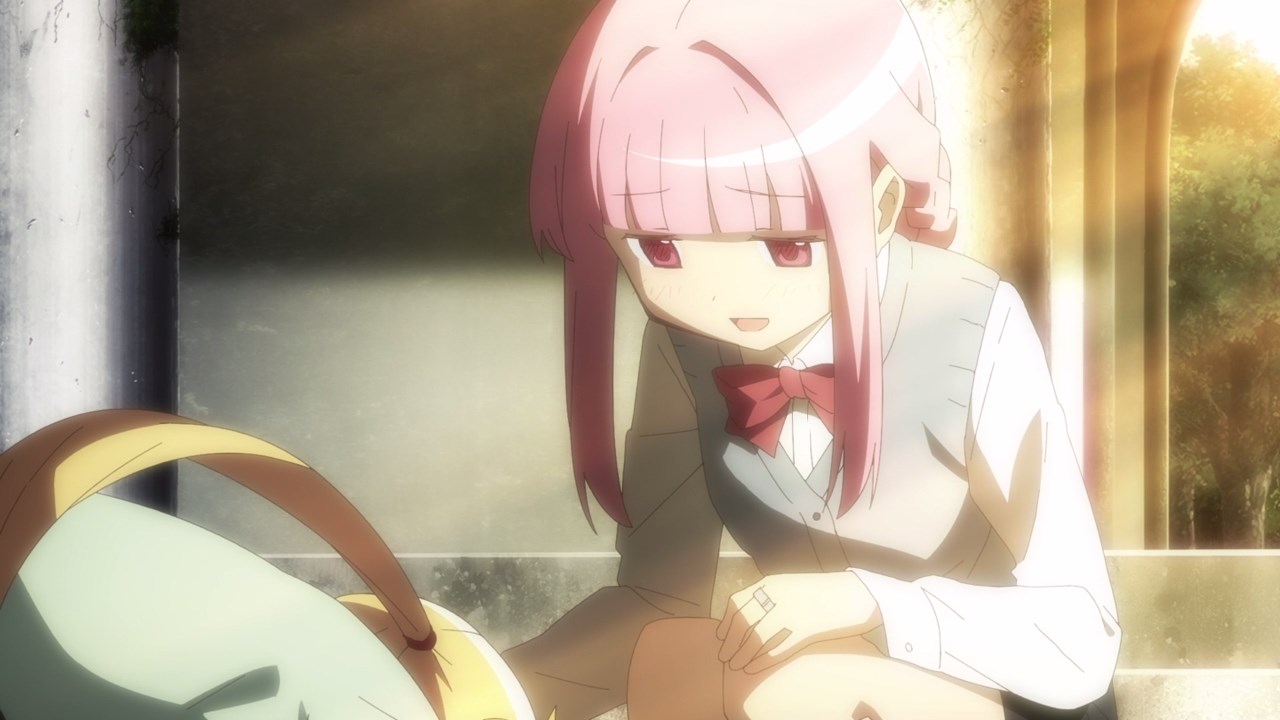 But you know what, I think she needs a dependable friend who can lean on as Iroha will gladly accept Felicia regardless of her troubled past.

Of course, I think they need a place to stay as Kamihama is a dangerous city to live. 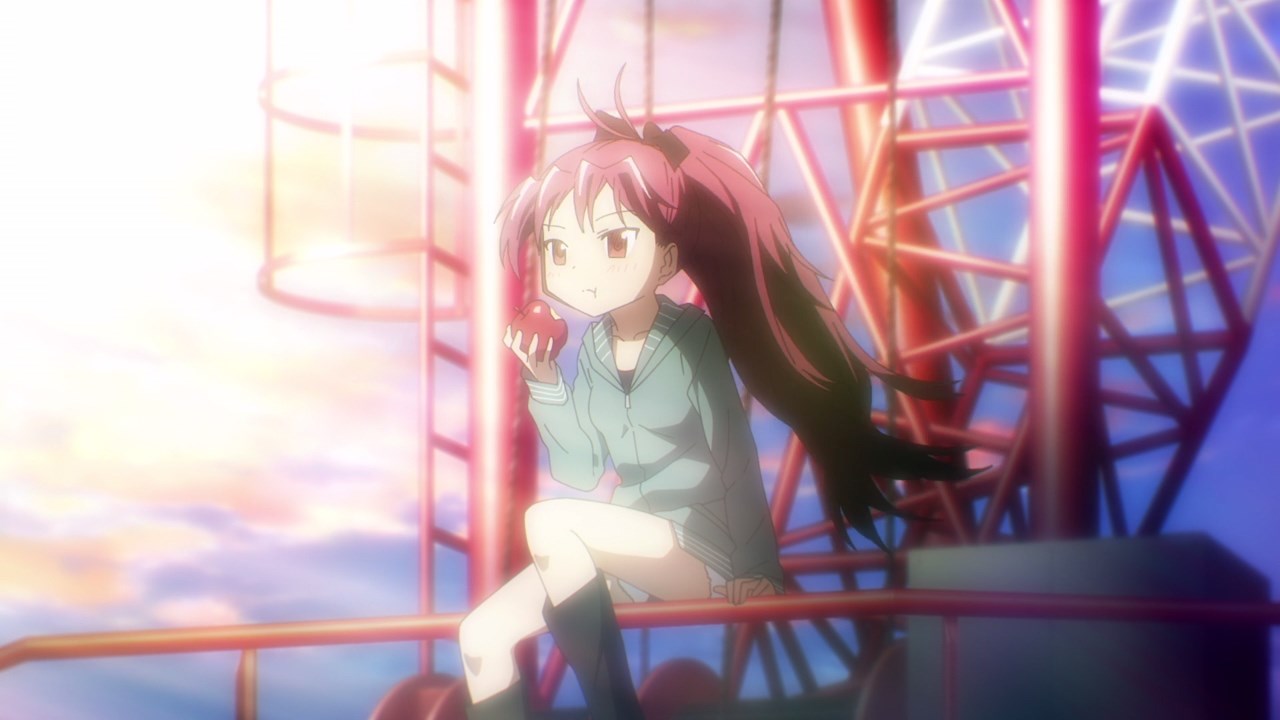 Meanwhile, Kyouko Sakura has decided to stay in Kamihama City for a while because she still wants to investigate on various witches that popping up in the city, as well as The Wings of Magius.

But you know what, I have to blame Homura Akemi for this! 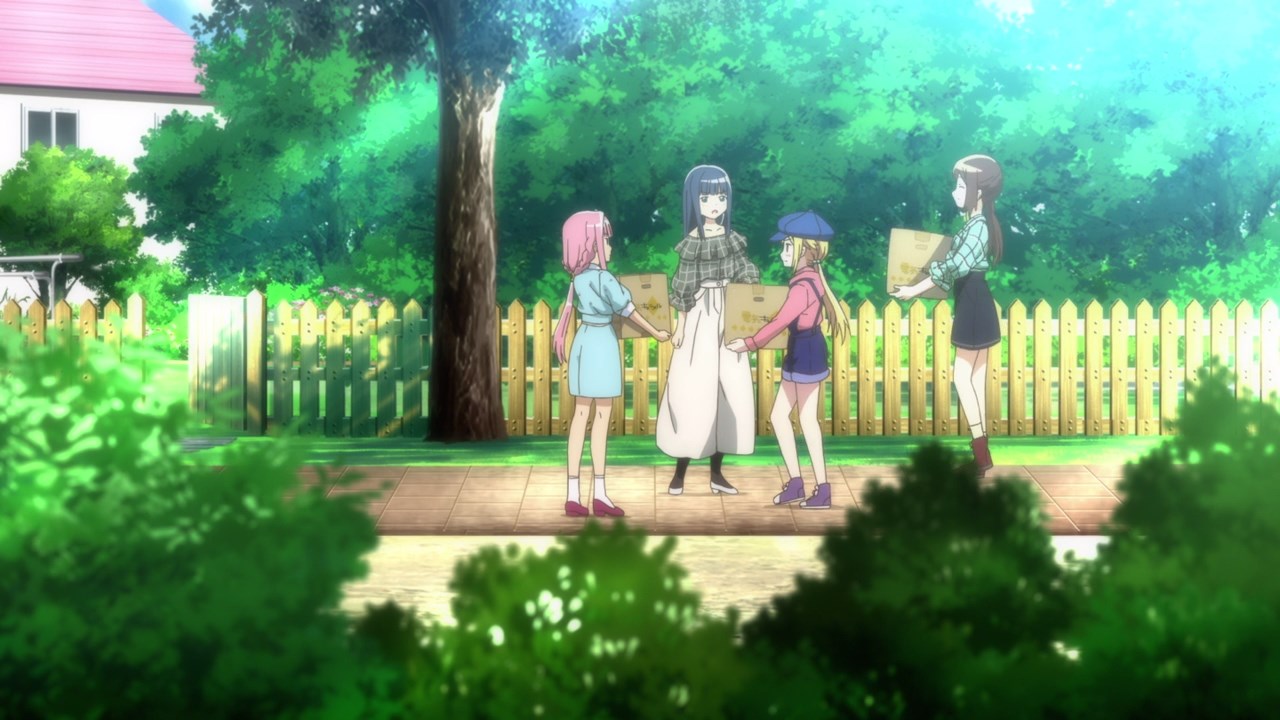 One last thing, looks like we’re gonna end this episode on a brighter note as Felicia Mitsuki and Iroha Tamaki will stay at Yachiyo Nanami’s house, meaning that they have a place to return to after a hard-fought battle against witches.

But that’s about it for this episode and I have to say that Iroha and the rest of the magical girls will have to deal with a bigger threat like The Wings of Magius, as well as various rumors within Kamihama City. Anyways, I’ll see you next time!