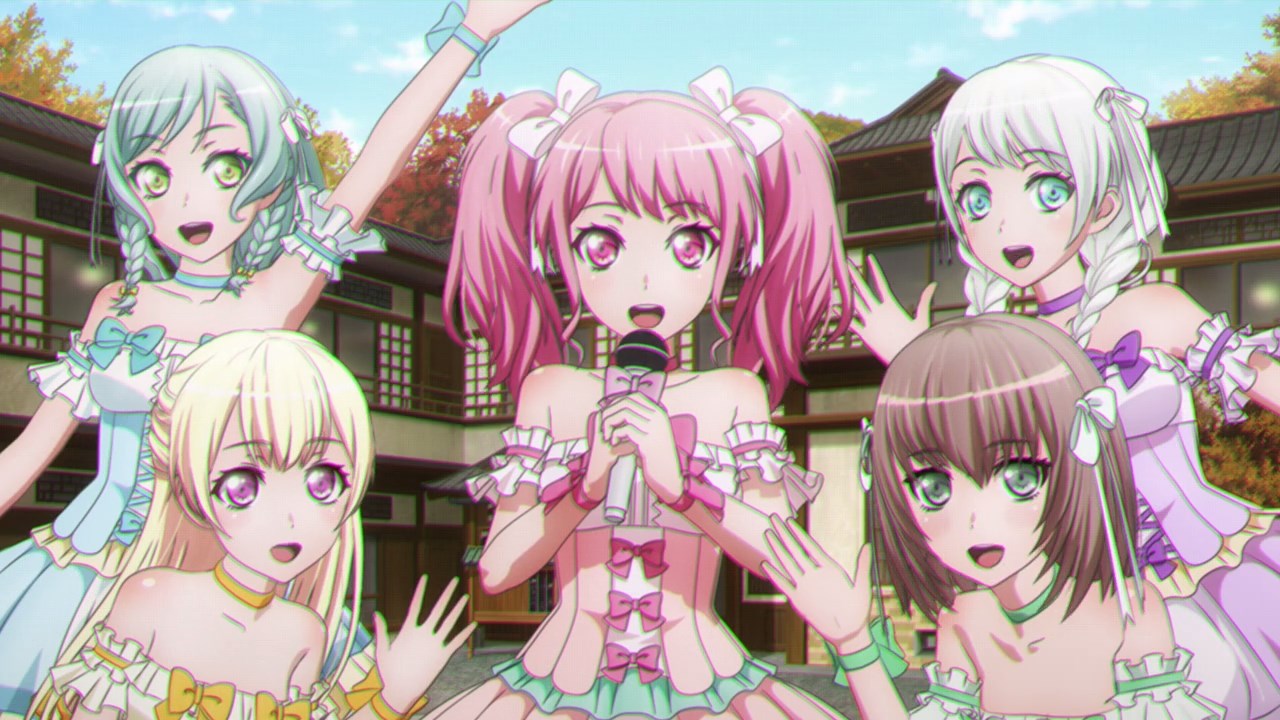 This episode is brought you by Pastel*Palettes as they’re here to showcase this ryokan as part of their TV program. Of course, Aya Maruyama and the rest will have some unexpected guests… 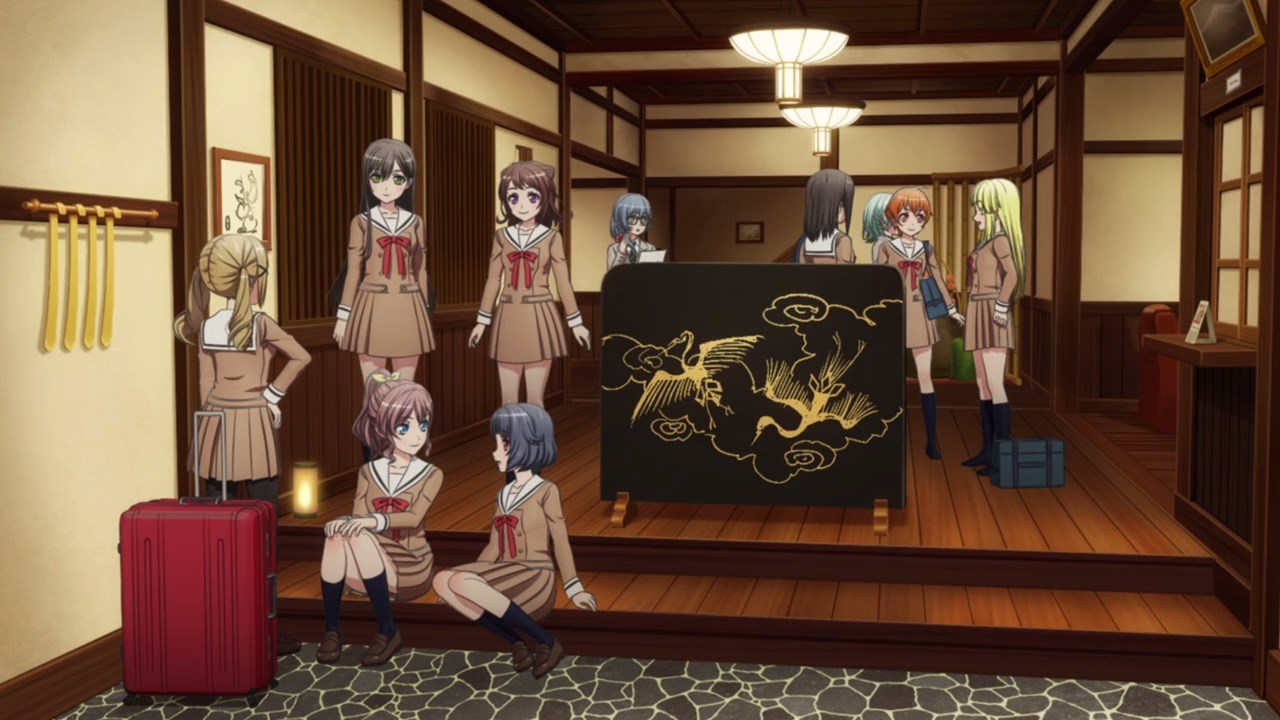 That’s because 5 more girls bands are flocking here as well. This means that all 6 bands have assembled at this inn!

Well, that’s not true because the only person who are missing for this trip are Chu2 and Pareo. While the latter can join the rest of RAISE A SUILEN, Pareo can’t leave Chu2 by herself. 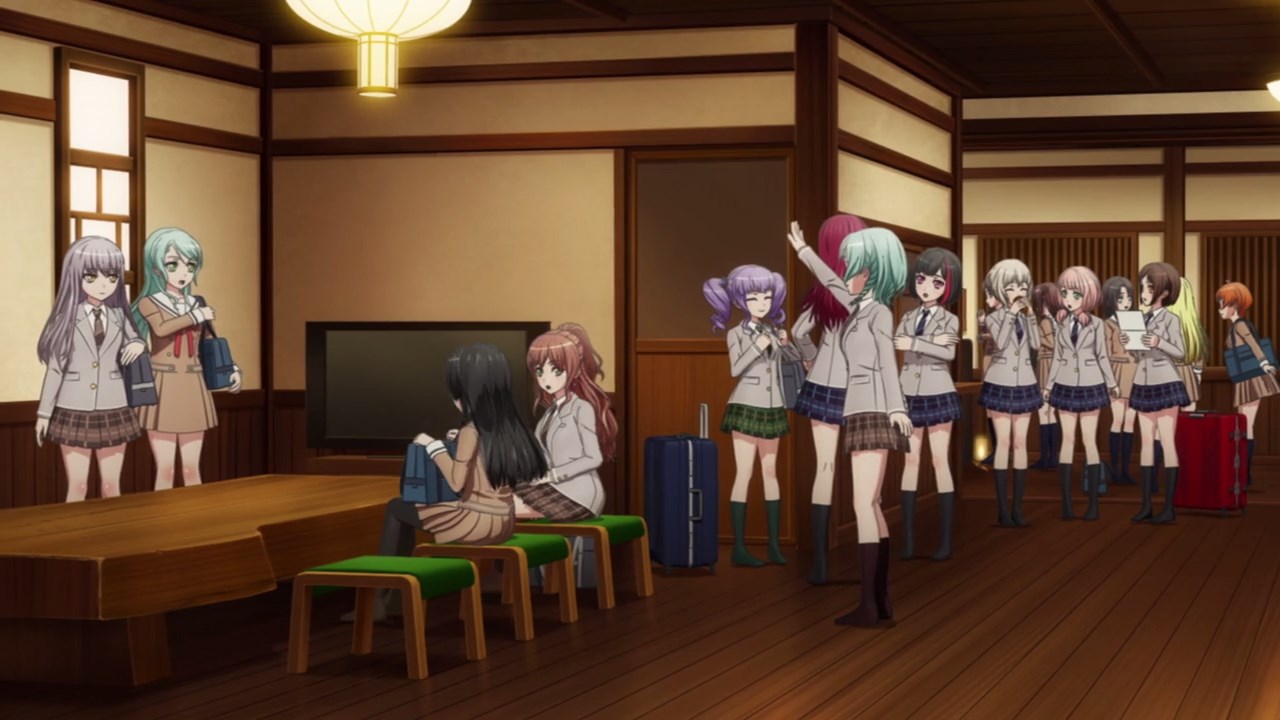 With that said, I think this episode will be fun as hell because lots of girls have gathered here to relax and share a bond among band members. 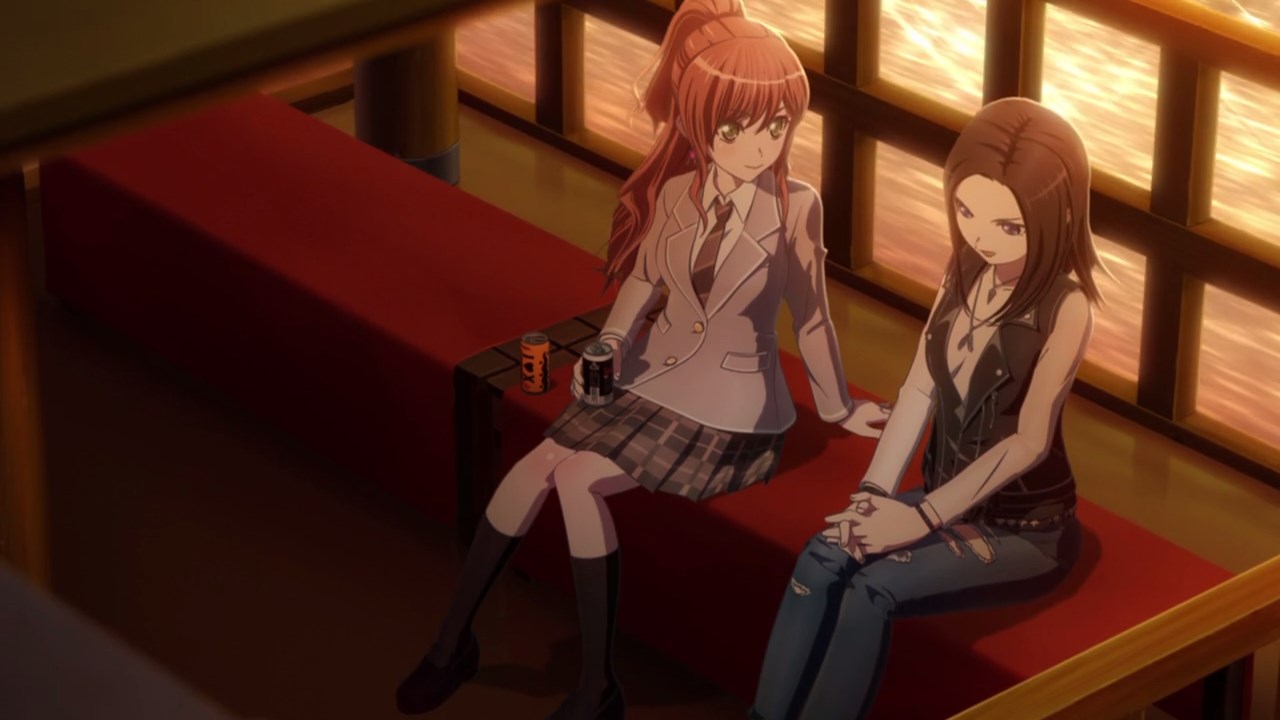 Anyways, time for some bonding starting with Rei Wakana where despite looking like an adult, Layer is actually a 2nd-year high school student.

Damn, I can’t believe that this bassist is younger than Lisa Imai! 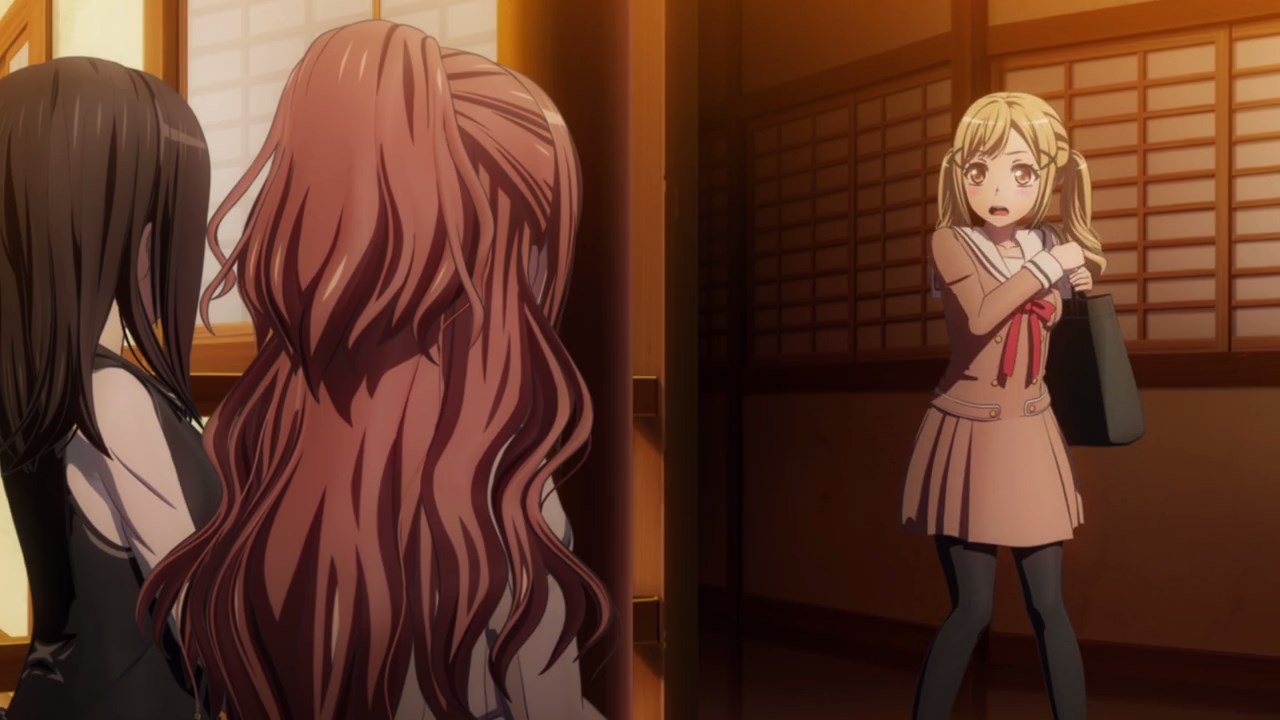 Also, Rei Wakana knows Arisa Ichigaya where she told Lisa Imai that Arisa is a top student from a music school, something that Arisa felt embarrassed about it.

Well, looks like Layer is not only a childhood friend to Tae Hanazono, but she’s also acquainted to Arisa Ichigaya.

Meanwhile, here’s Yukina Minato where she’s at the hot springs together with Ran Mitake, where she told Yukina that she saw Roselia’s Over the Future concert and it was great.

By the way, I’m hoping that they won’t stay long at the hot springs ’cause Yukina and Ran might faint if they soak too long there. 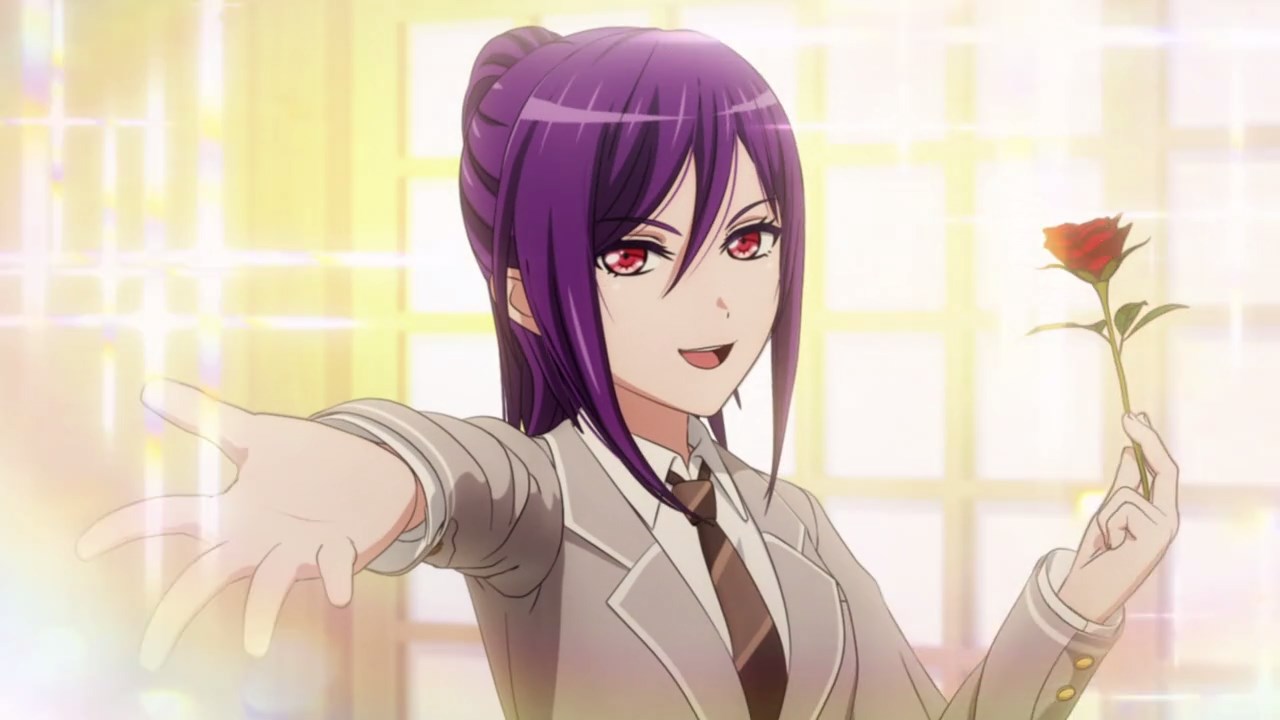 Now then, let’s move onto Kaoru Seta where her fleeting charm has captured the hearts of many girls. 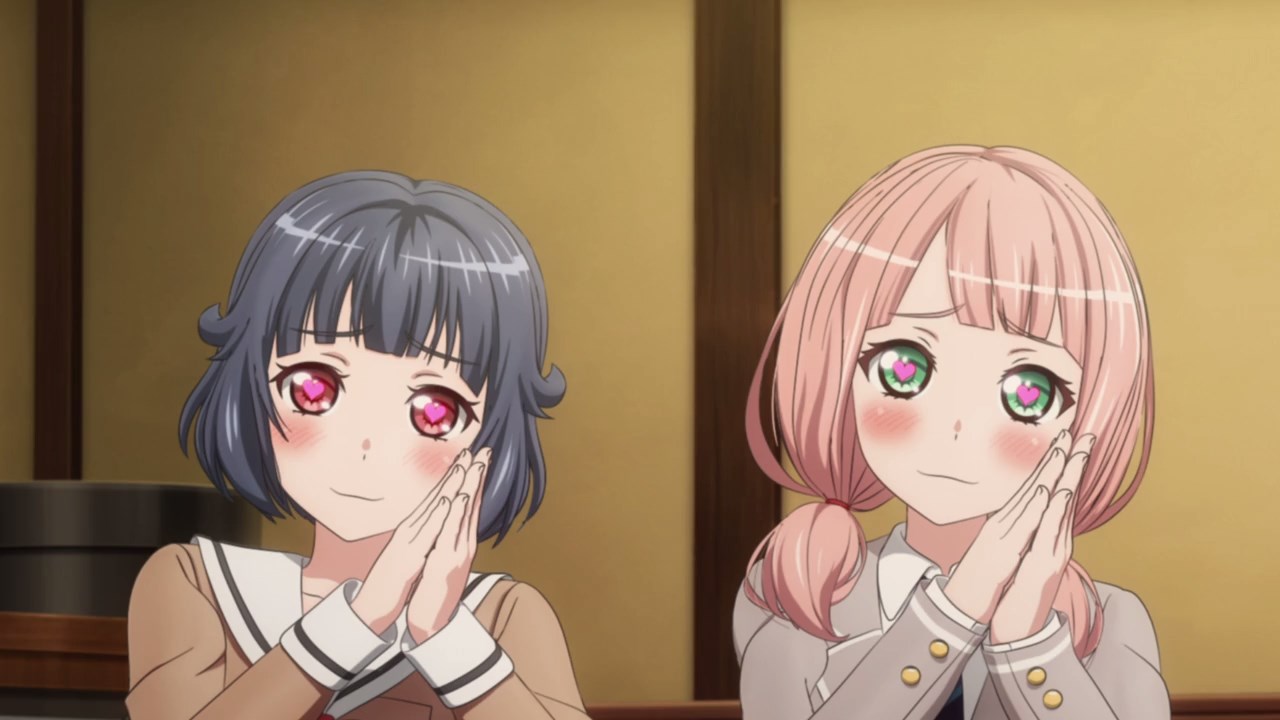 This includes Rimi Ushigome and Himari Uehara where they’re star-struck by Kaoru’s looks. C’mon, let them enjoy seeing their wonderful prince that is Kaoru Seta! 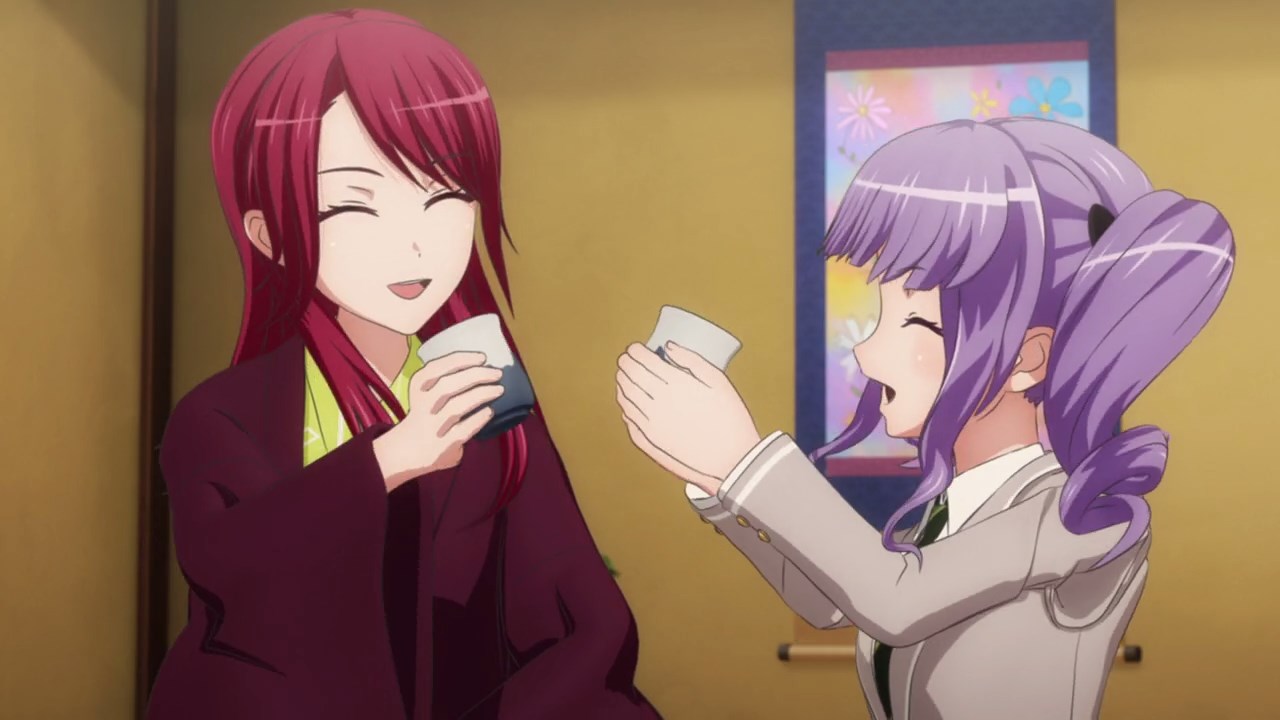 And here’s something interesting as we got ourselves a girls’ talk among drummers like the Udagawa sisters, Tomoe and Ako. 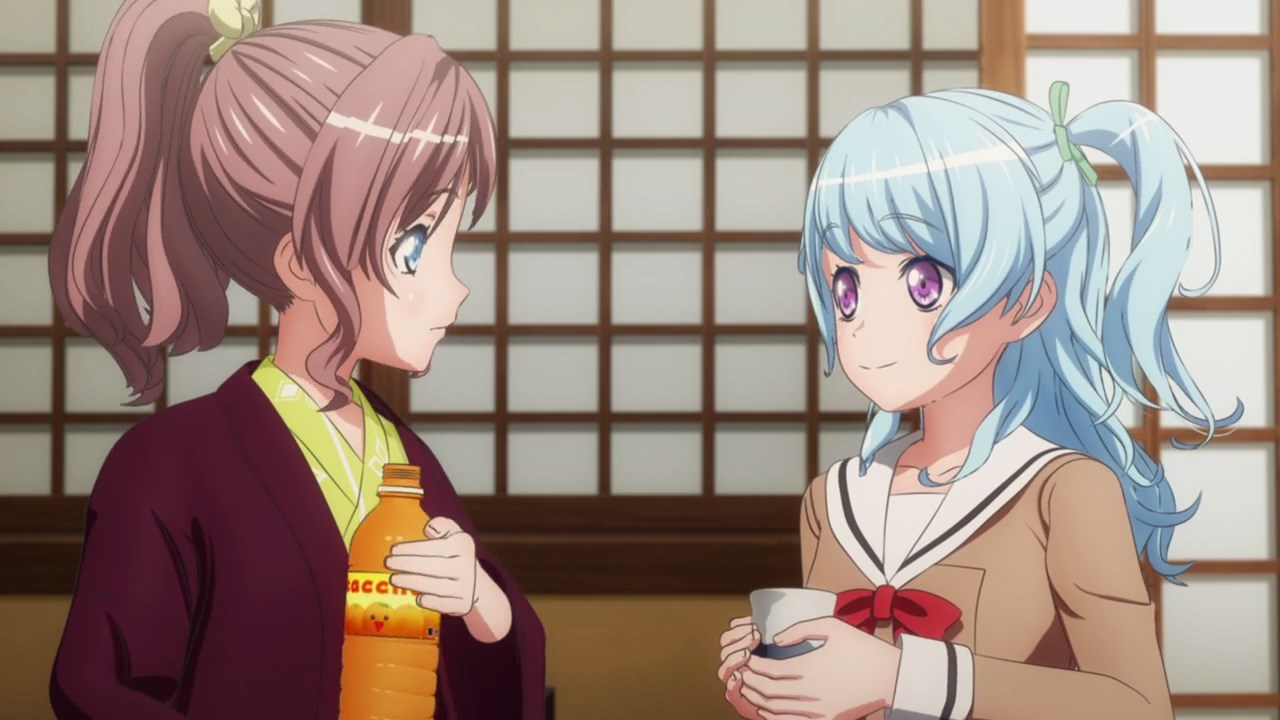 As well as Saya Yamabuki and Kanon Matsubara where they share their stories from their respective bands, although Kanon is a bit flustered when it comes to Misa- I mean Michelle’s whereabouts. 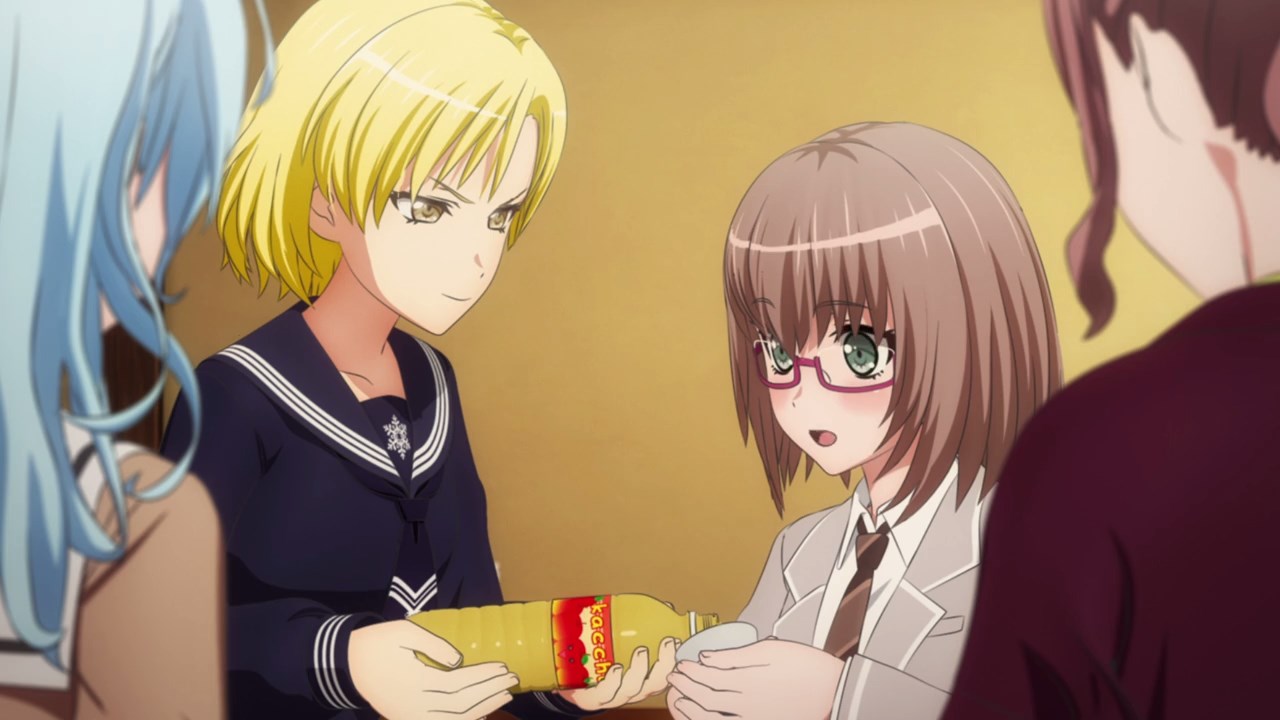 One more thing, seems that Masuki Sato is a fan of Maya Yamato in which she really adored her drumming skills.

Well, seems that Pastel*Palettes not only have Pareo as their biggest fan, but also Masking too. Then again, Chu2 doesn’t like her band-mates getting friendly towards other bands. 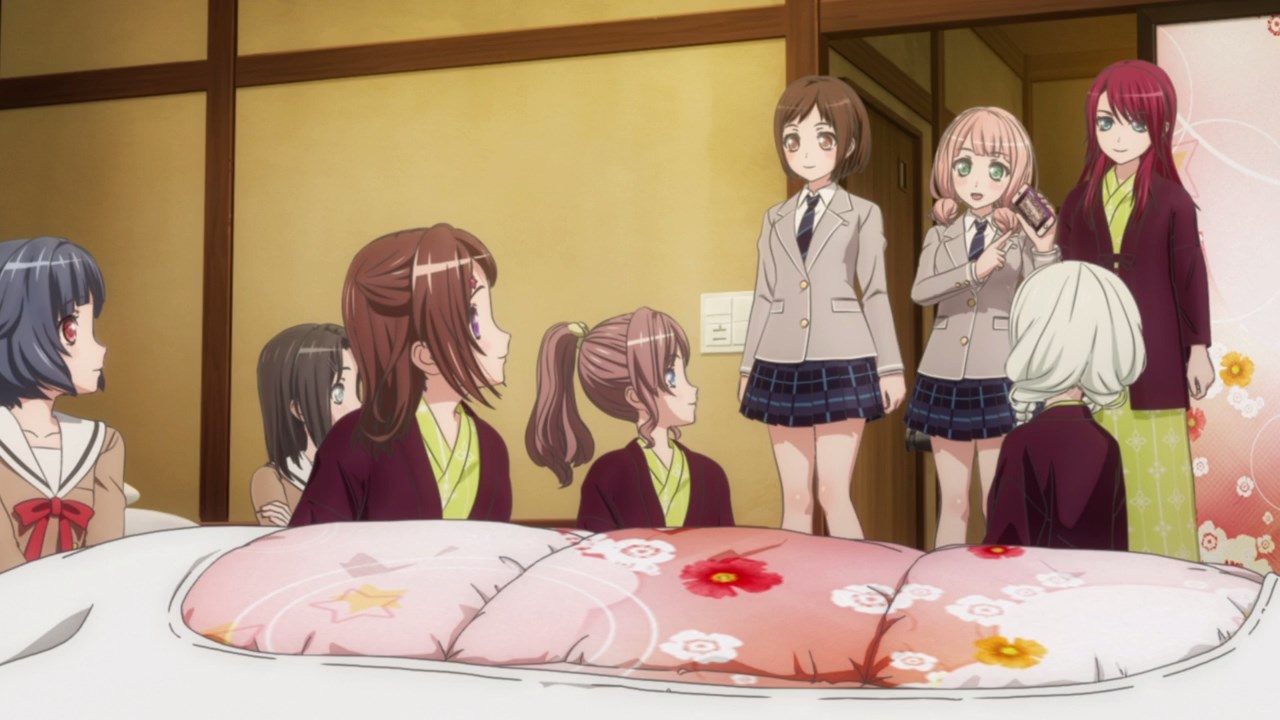 Now then, seems that Himari Uehara told Kasumi Toyama and the rest that their music video is getting more views. Of course, they made it on a shoe-string budget. 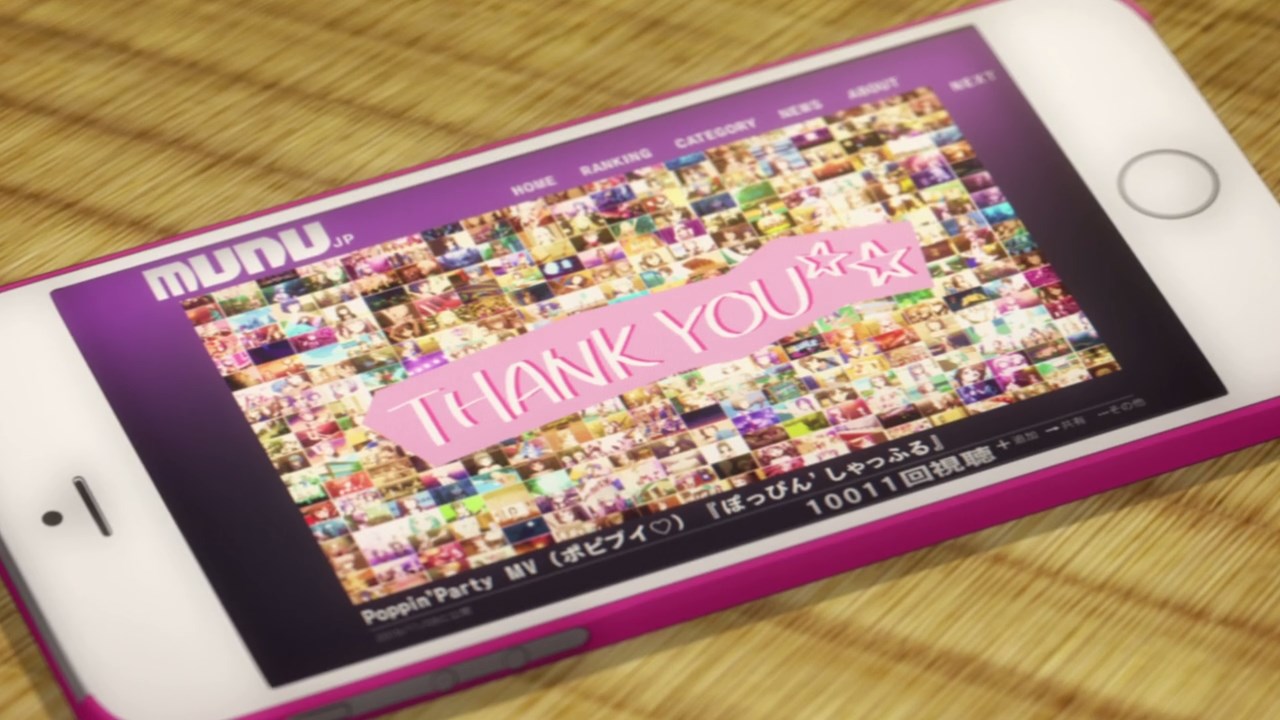 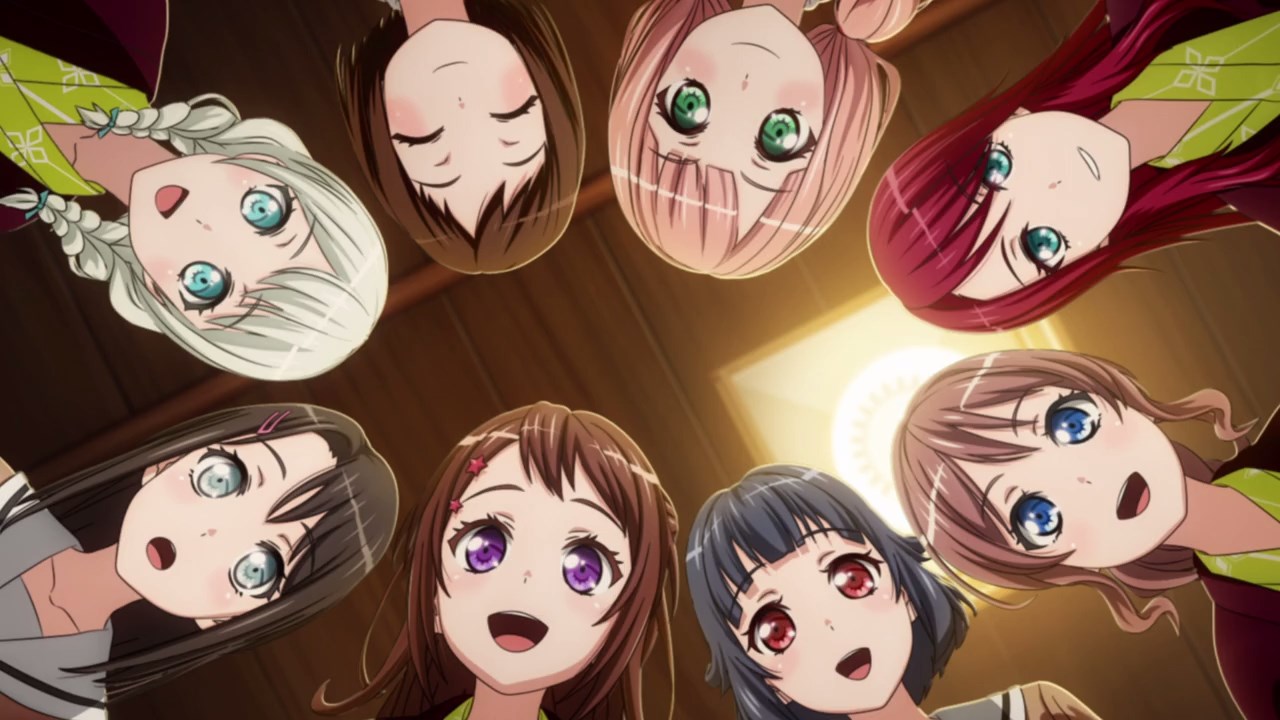 With that said, Kasumi and the rest are happy that their PoPi-V is becoming popular, and I’m sure that it’ll help them grab the 2nd spot in the BanG Dream! Girls Band Challenge. 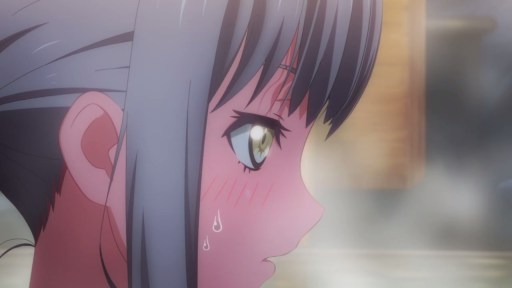 And now, let’s end this episode with Yukina Minato where she stayed at the hot springs for too long. I mean, look at her skin as it’s beet red.

But more importantly, Yukina saw a glimpse of Michelle’s silhouette before passing out. Could it be that a certain member brought that costume at the ryokan and wear it? We’ll never know…

Anyways, looks like we’re done on this hot springs episode, but Chu2 won’t be happy that she got left out in favor of mingling with other girls bands!