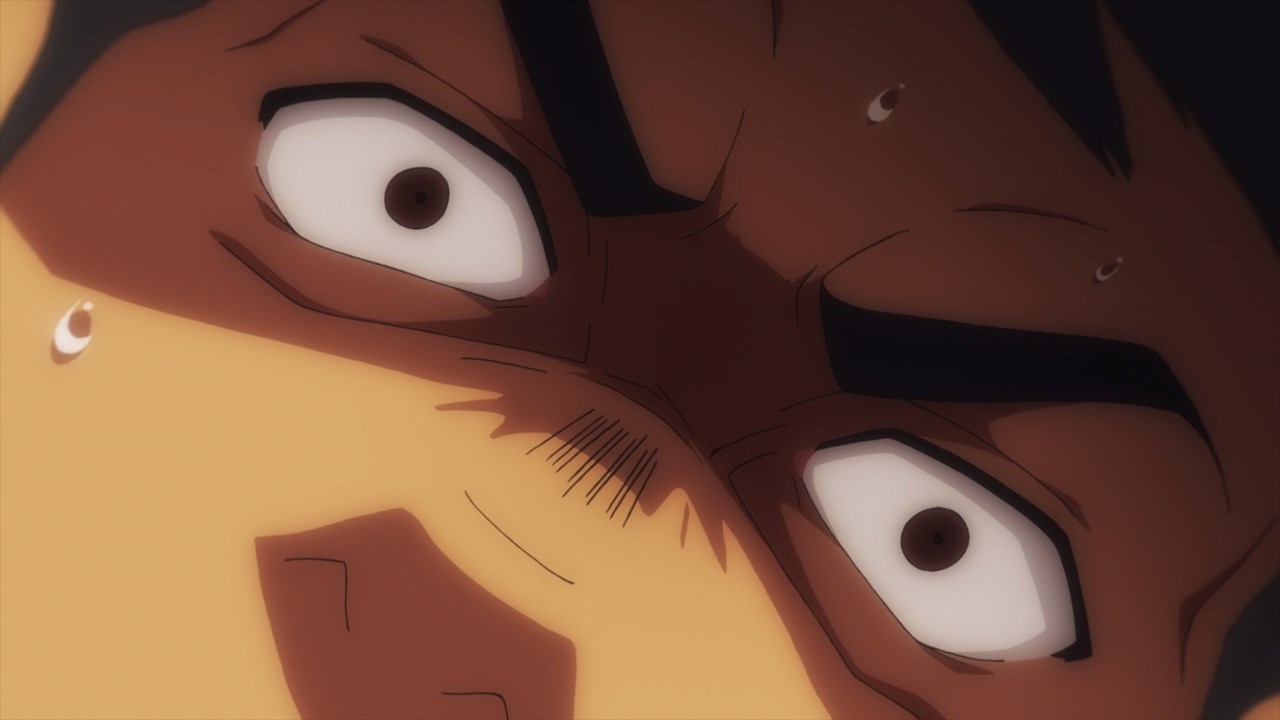 Well guys, here’s Aoi Gouda where this stoic guy is shocked to see The Wall’s controversial order. I mean, a talent agency created an idol group and then force to disband it in less than a year is very surprising! 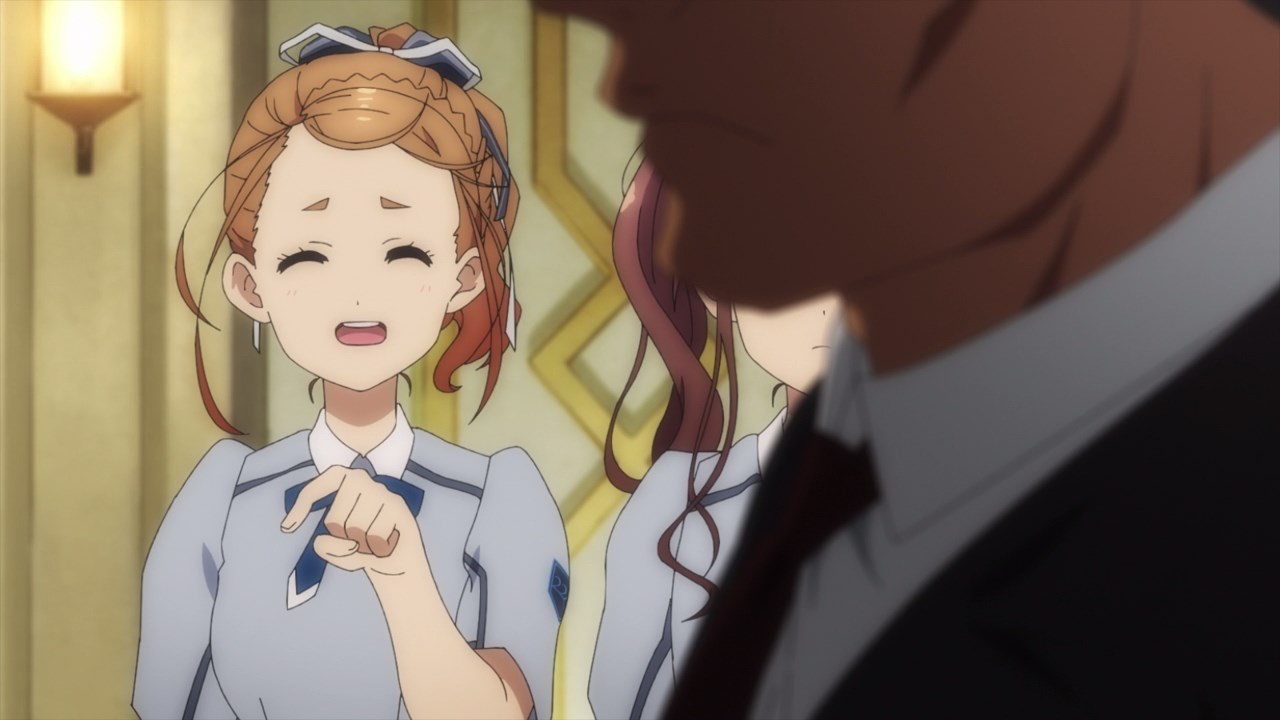 Of course, some say that it was a prank created by The Wall just to throw them off. Then again, it’s not like The Wall is making a joke because its spurting out absolute orders. 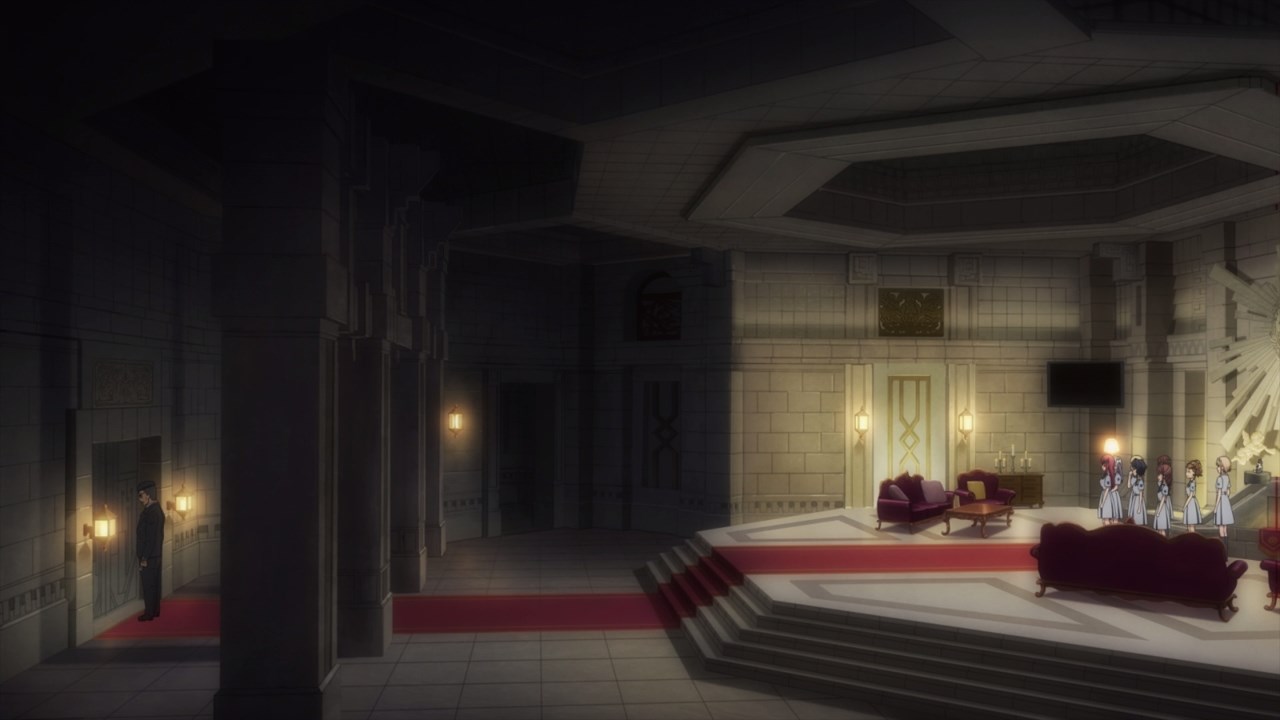 With that said, Aoi Gouda told the girls to pack up their things as Nanabun no Nijyuuni is no more. No buts nor ifs, it’s The Wall’s orders after all! 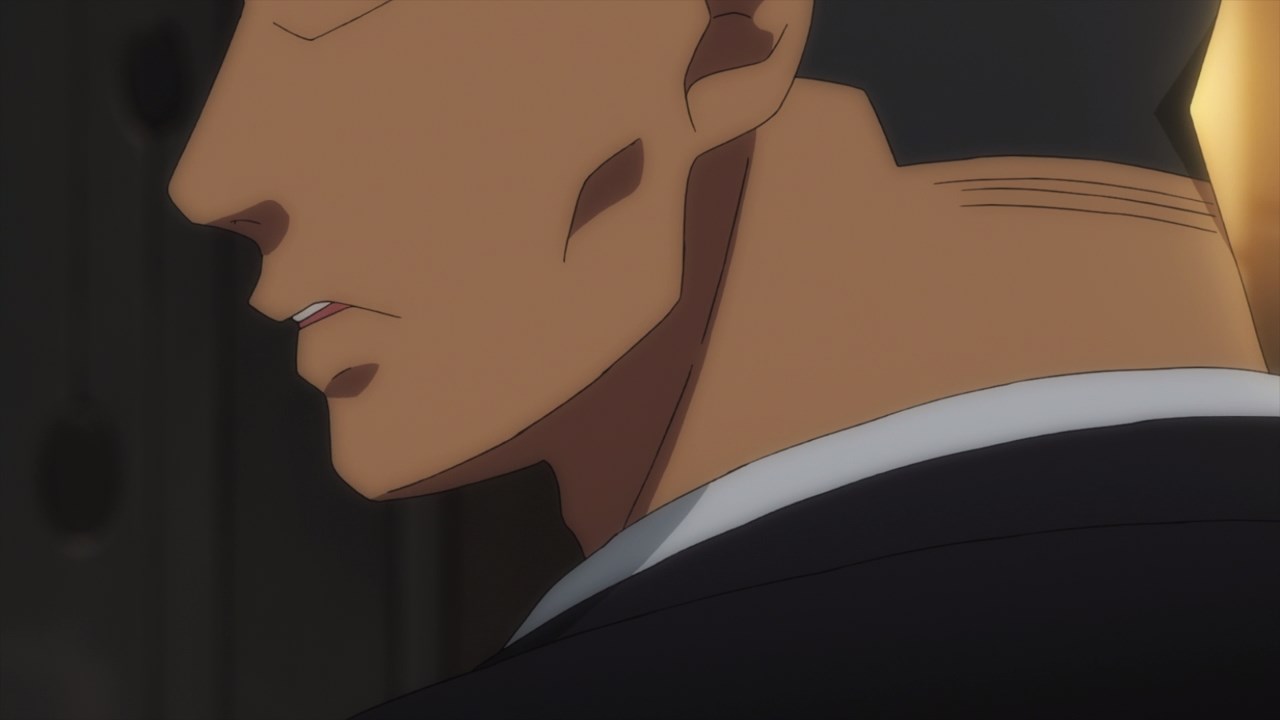 Then again, despite telling the girls to leave Production GIP with a stoic face, something tells me that Gouda-san felt disappointed that The Wall would order a disbandment. 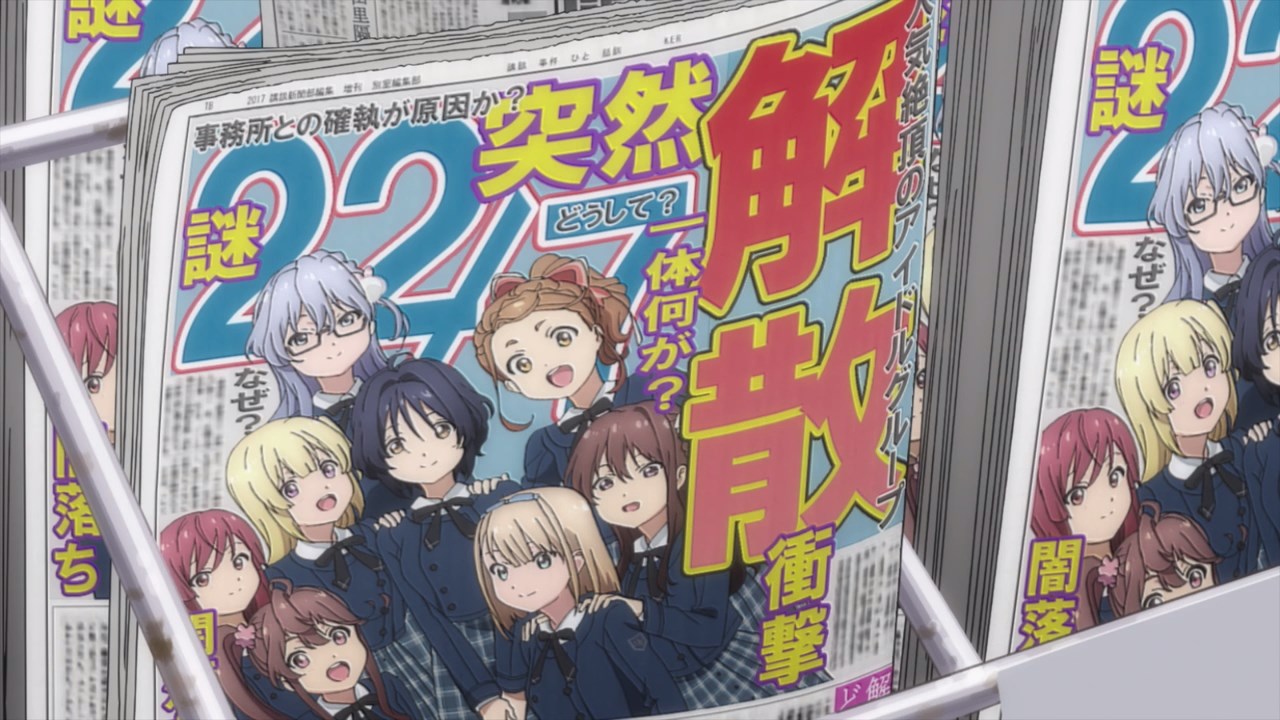 Afterwards, the news have spread across Japan like wildfire and most of the fans are either angry or cheated that 22/7 would disband in less than a year. 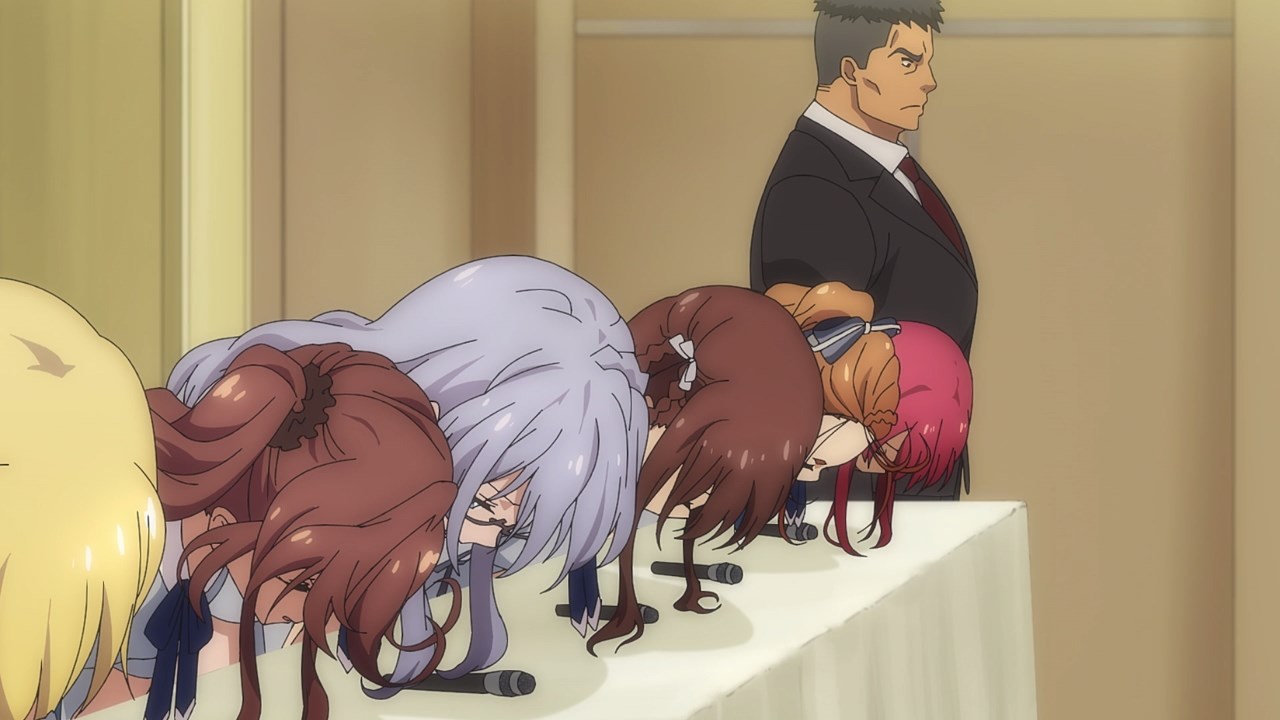 Speaking of 22/7, the girls have any say in regards to the group’s disbandment as they simply apologize and bid farewell in front of the media press.

You know what, I blame The Wall for toying their emotions with its whimsical absolute orders. 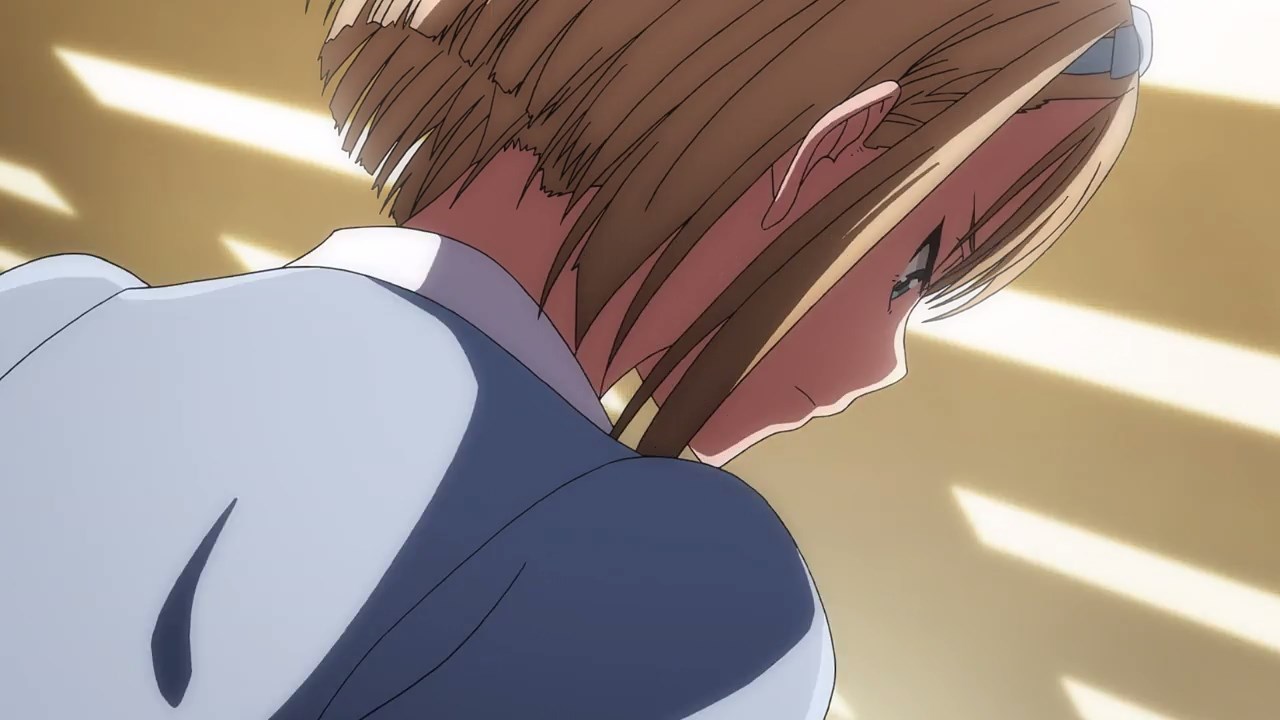 Of course, the only one that got hurt the most is Nicole Saitou where she’s the most hardworking idol of all, yet Nicole didn’t become a center when The Wall picked Miu Takigawa as the face of Nanabun no Nijyuuni.

Well then, that’s the end of this episode but it’s not over yet since there’s still more to make us feel pity towards the girls. 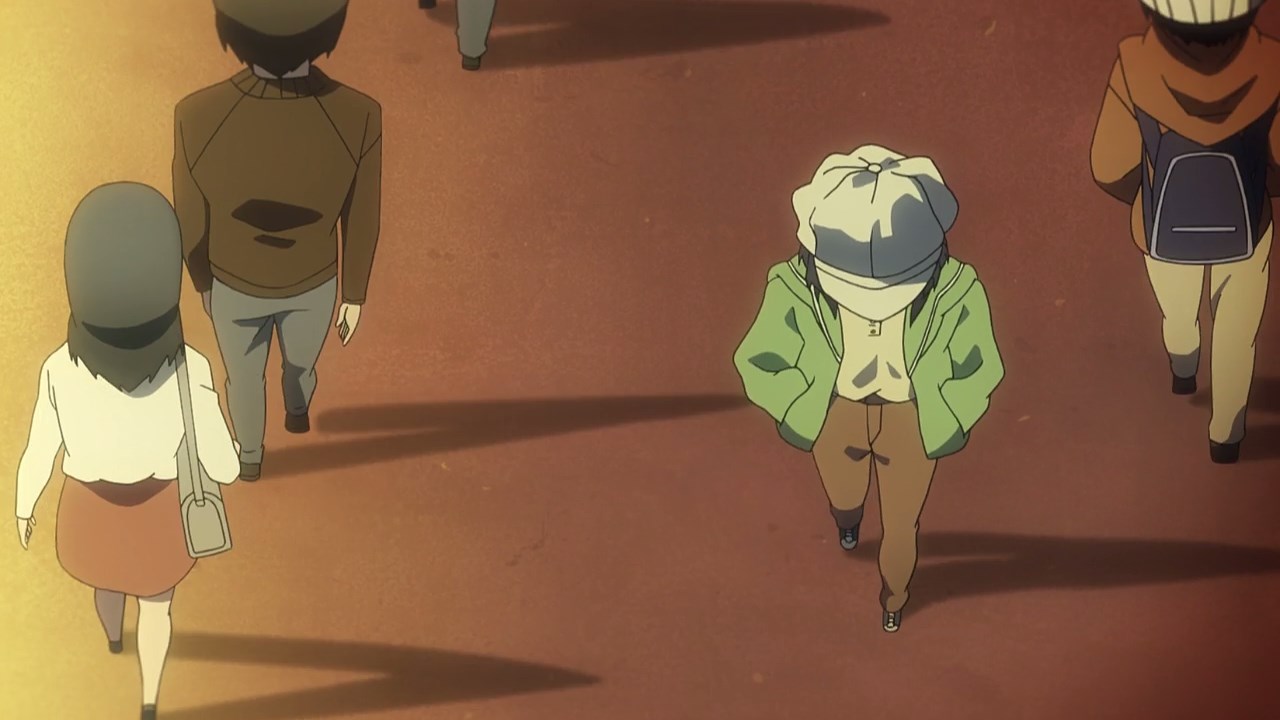 Starting with Miu Takigawa where she’s now living a normal life after 22/7, although she’s not safe towards various people… 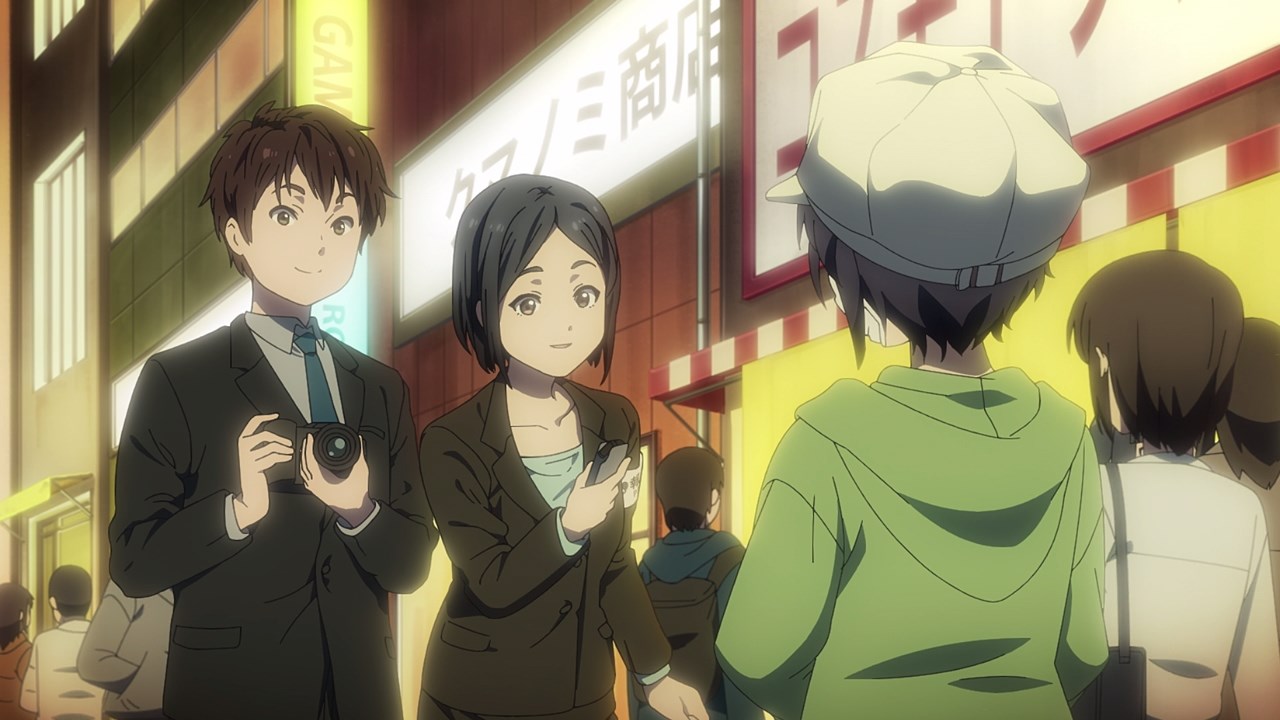 …like these reporters in which they want to have an interview with Miu in regards to Nanabun no Nijyuuni’s disbandment.

While Takigawa will tell them that it’s The Wall’s fault, it’s not like they these reporters would believe that a mysterious entity is ordering them. 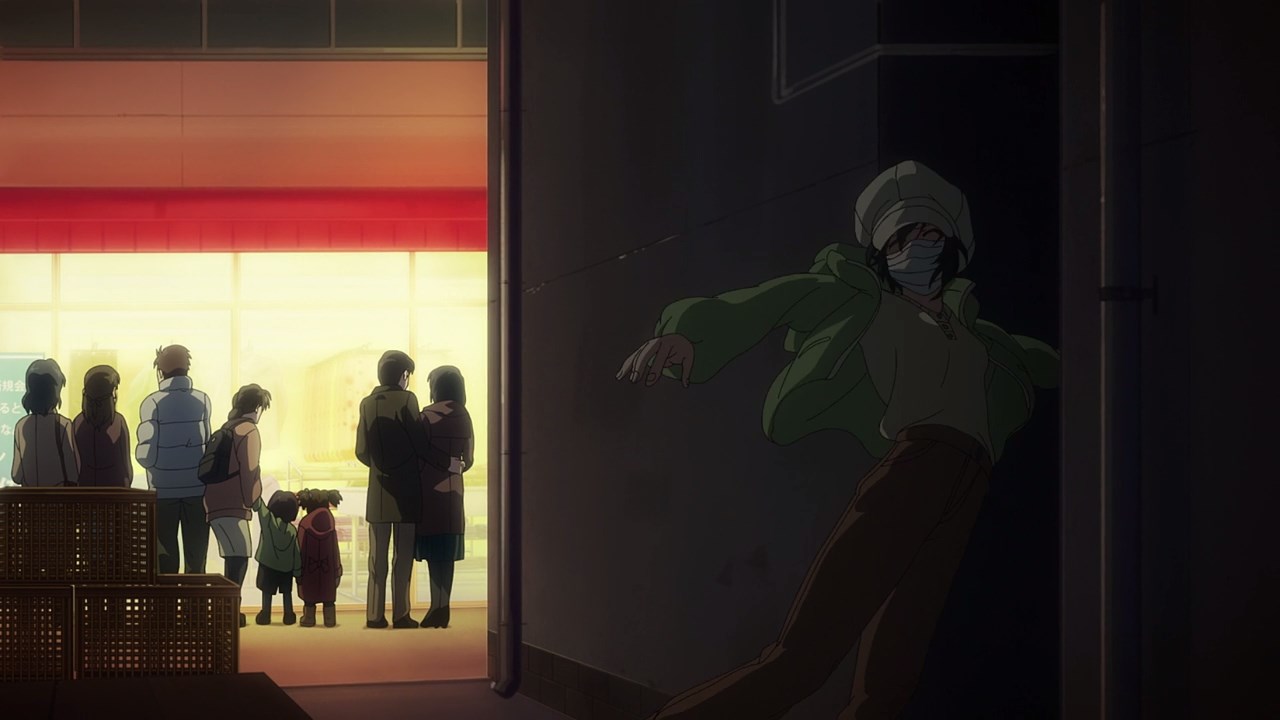 Well then, time for Miu Takigawa to run away from the reporters but it appears that she got abducted… 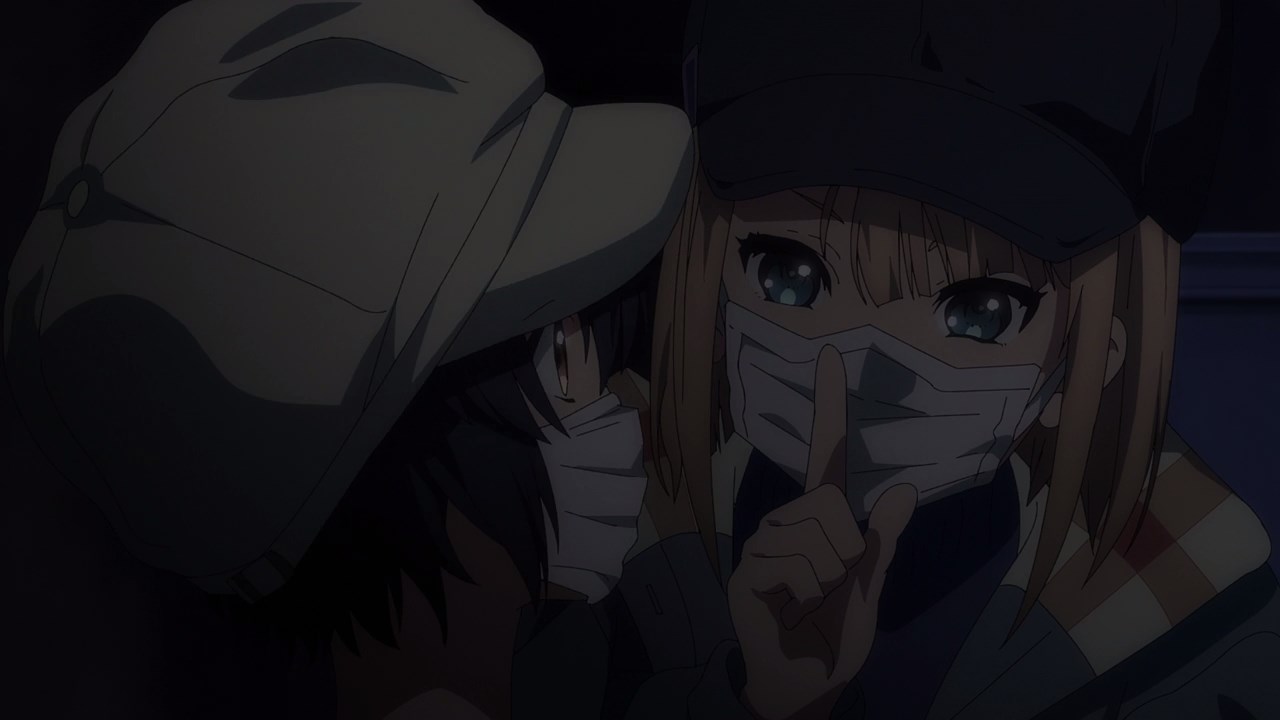 …by Nicole Saitou of all people. Well, turns out that Nicole is helping Miu by hiding her to the reporters, especially the shady ones.

In any case, looks like Takigawa learned her lesson on laying low from mainstream media. 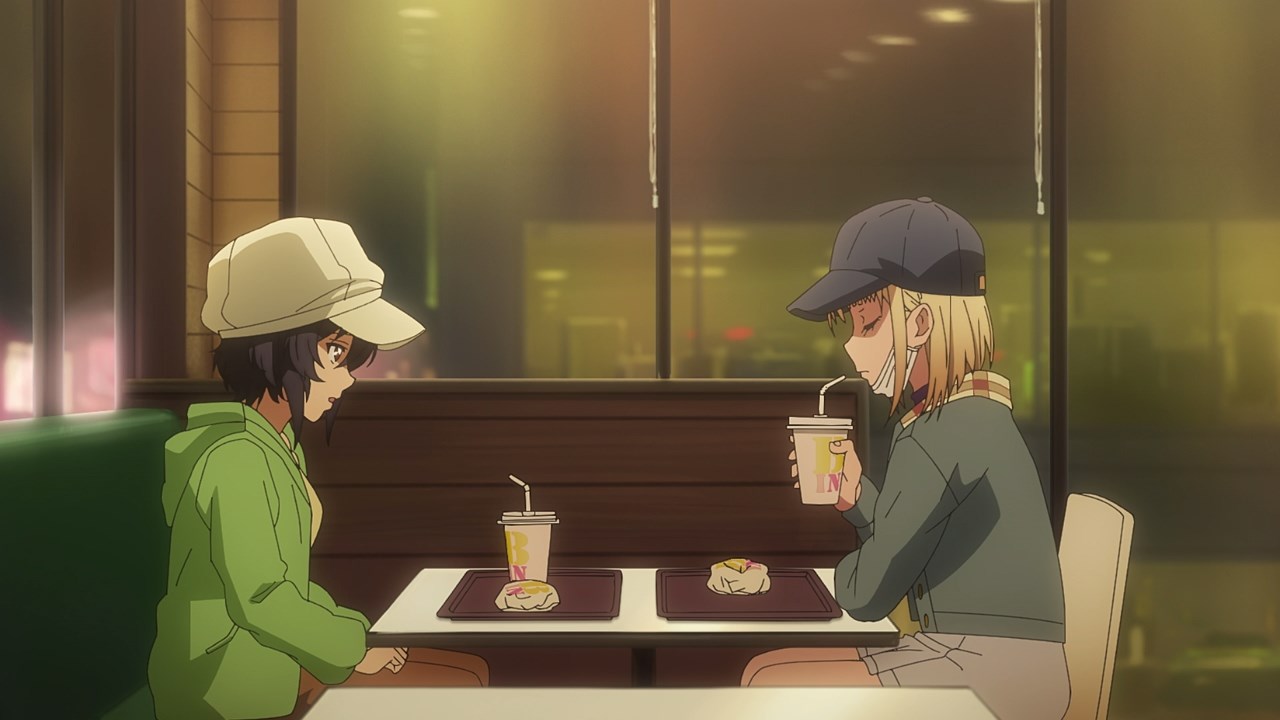 Now then, both Miu and Nicole are staying at the a burger joint for the time being until the reporters went away.

While we’re at it, they’re discussing about their next move and while Saitou will join a different talent agency, Takigawa has no plans for herself. This prompted Nicole to ask Miu if she cherish something precious in which Takigawa couldn’t answer it at the moment.

But you know what, I think the most precious thing she cherish the most is her family, as well as playing the piano in which she has some talent as seen on Episode 3. Maybe it would be nice if Miu decided to become a pianist to support her family. 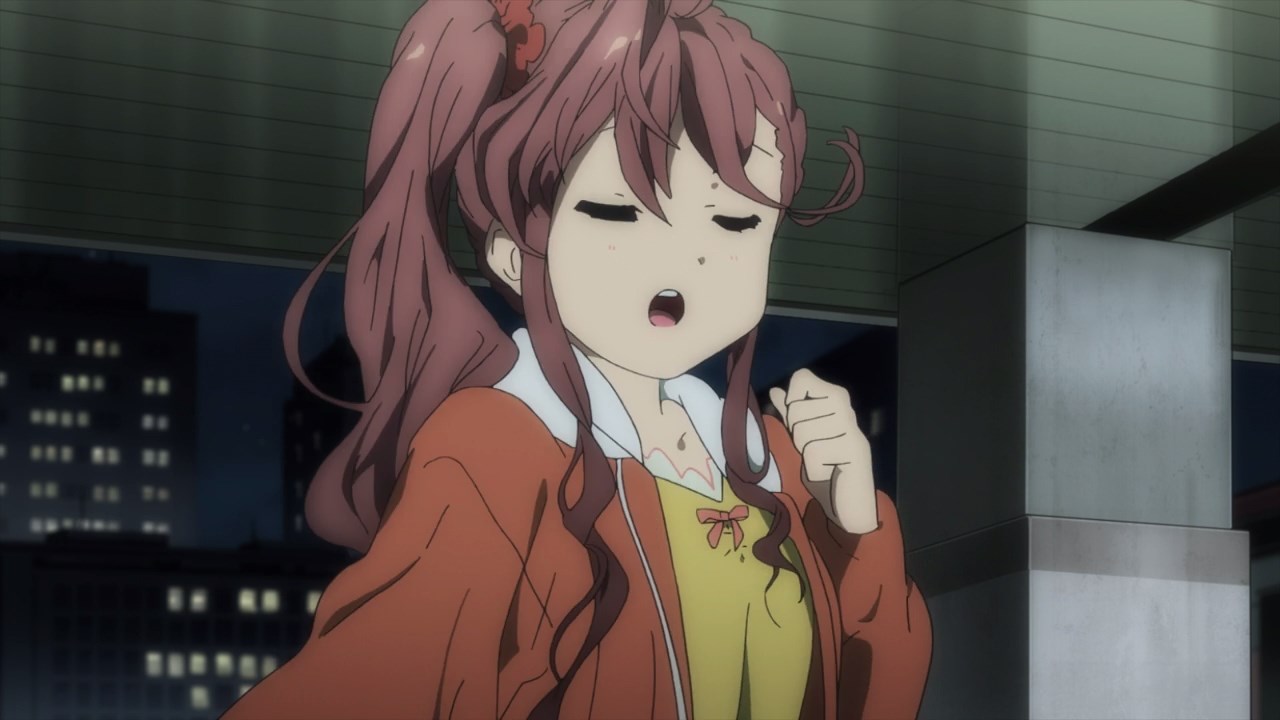 Moving onto Jun Toda where she still wants to keep the idol dream alive as Jun performs at the streets.

Of course, the reason why Toda sing and dance is she doesn’t want 22/7 to end in a puff of smoke. 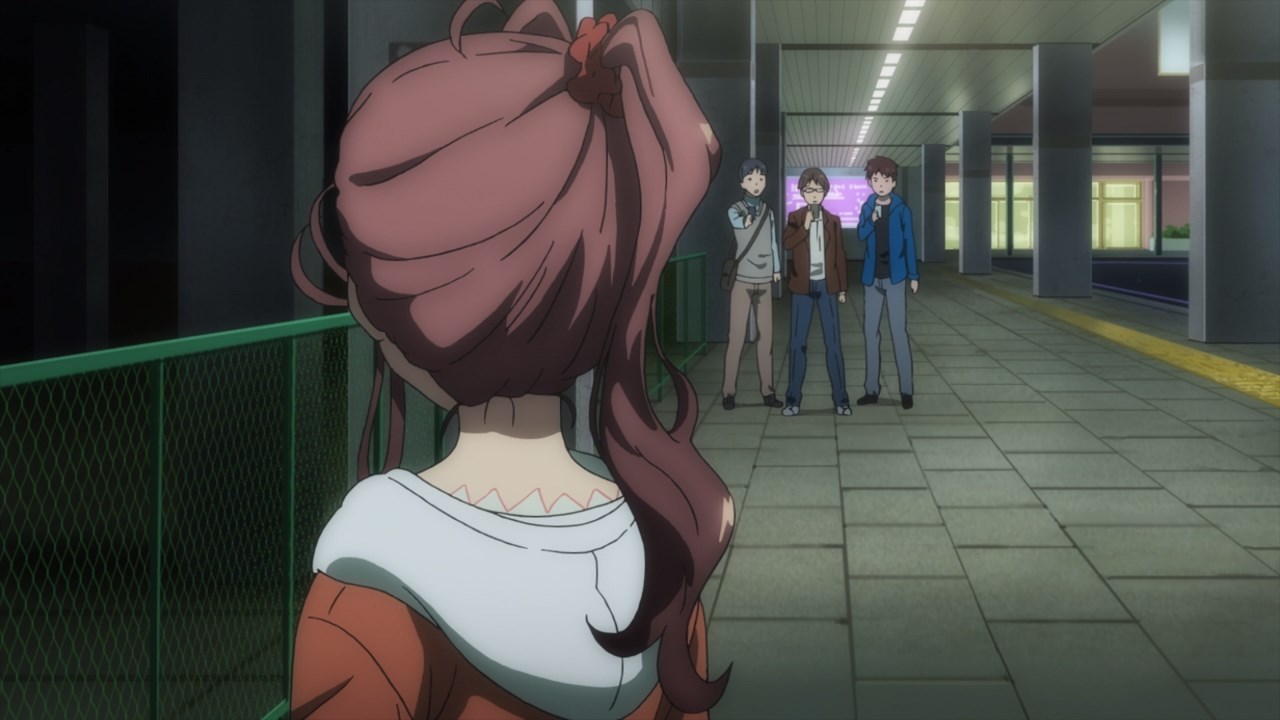 Then again, it appears that her impromptu performance has attracted some people. Oh boy, looks like Jun got spotted! 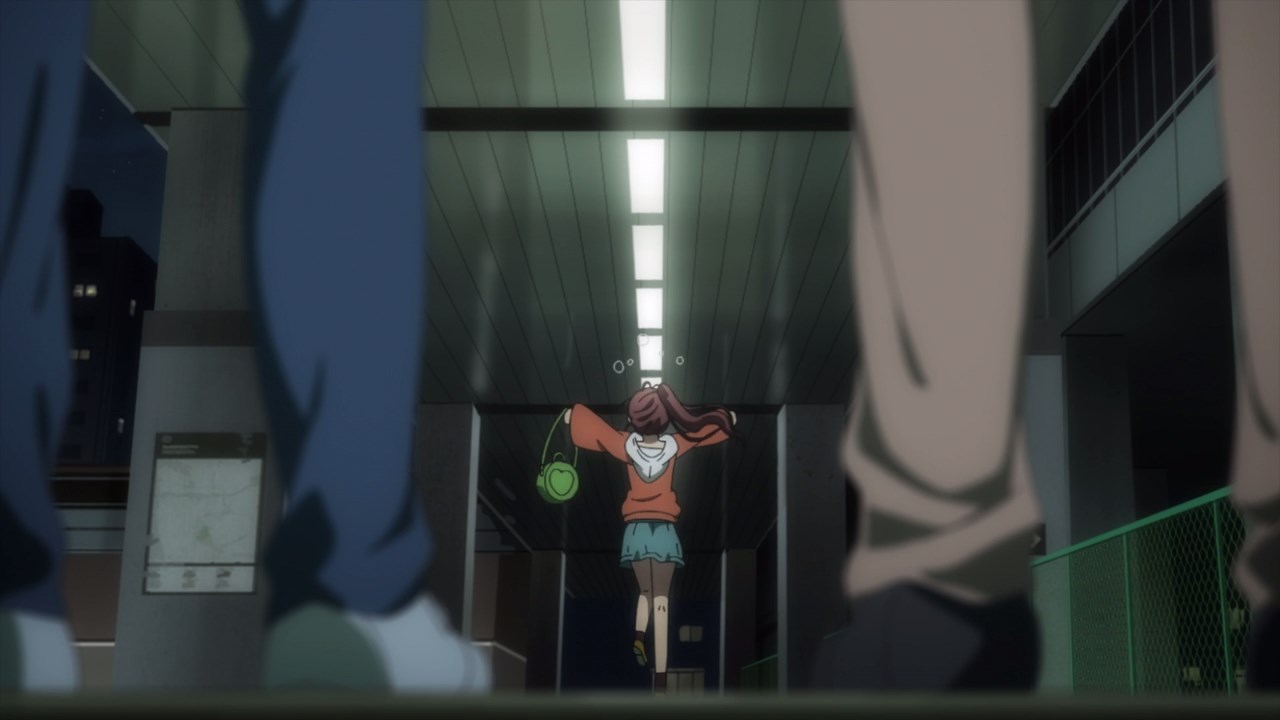 Well then, show is over as Jun Toda ran away because she might get hounded by the mainstream media. 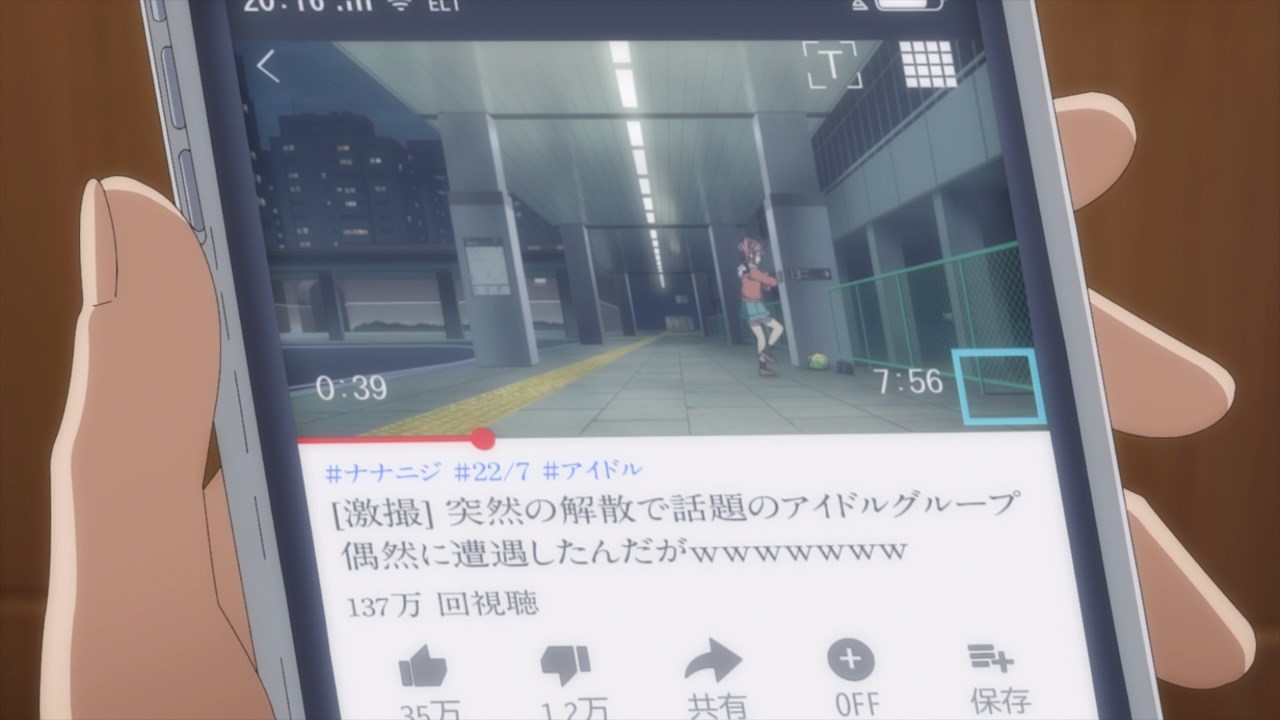 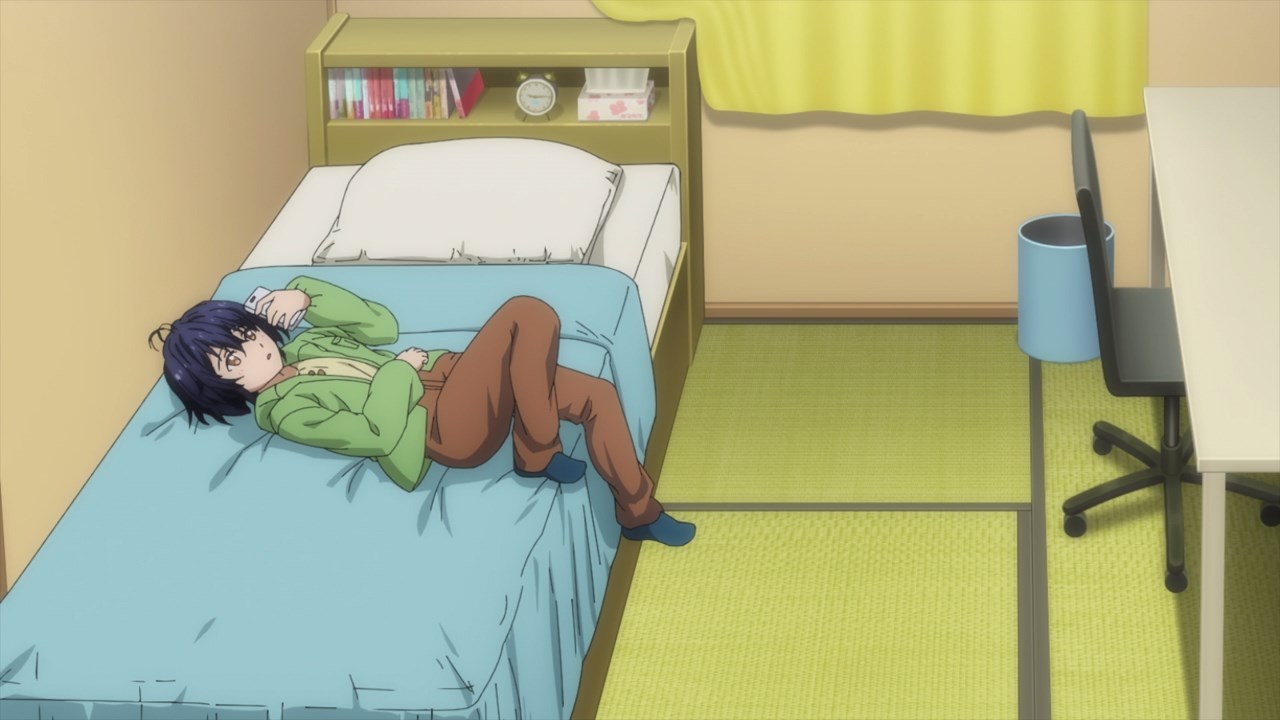 On second thought, seems that someone posted a video of her performance on social media, although the comments is pretty mixed where there are detractors and some supporters voicing their concerns over Nanabun no Nijyuuni.

Still, the likes of Miu Takigawa and the rest will have to remain hidden from the public eye for now… until The Wall has decided to restart 22/7, but will it be too late? 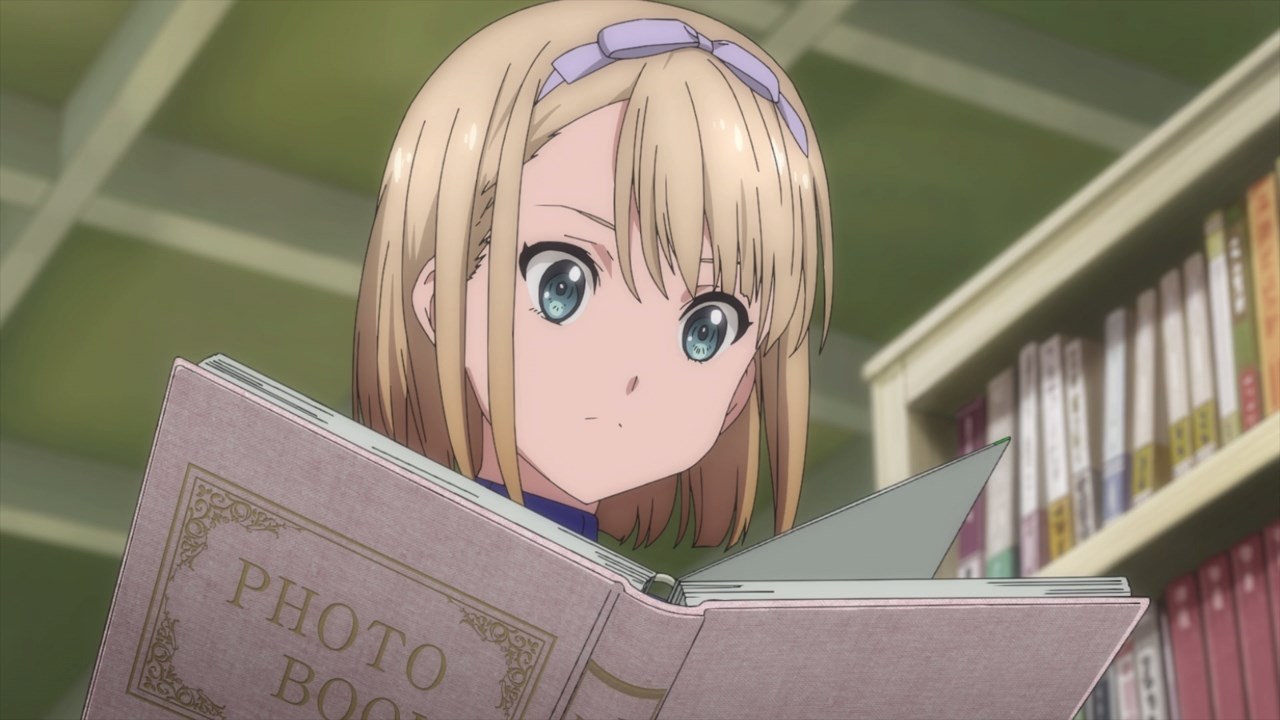 One last thing, here’s Nicole Saitou and we haven’t seen her backstory yet after watching the rest of the cast. What drives her to become an idol in the first place? 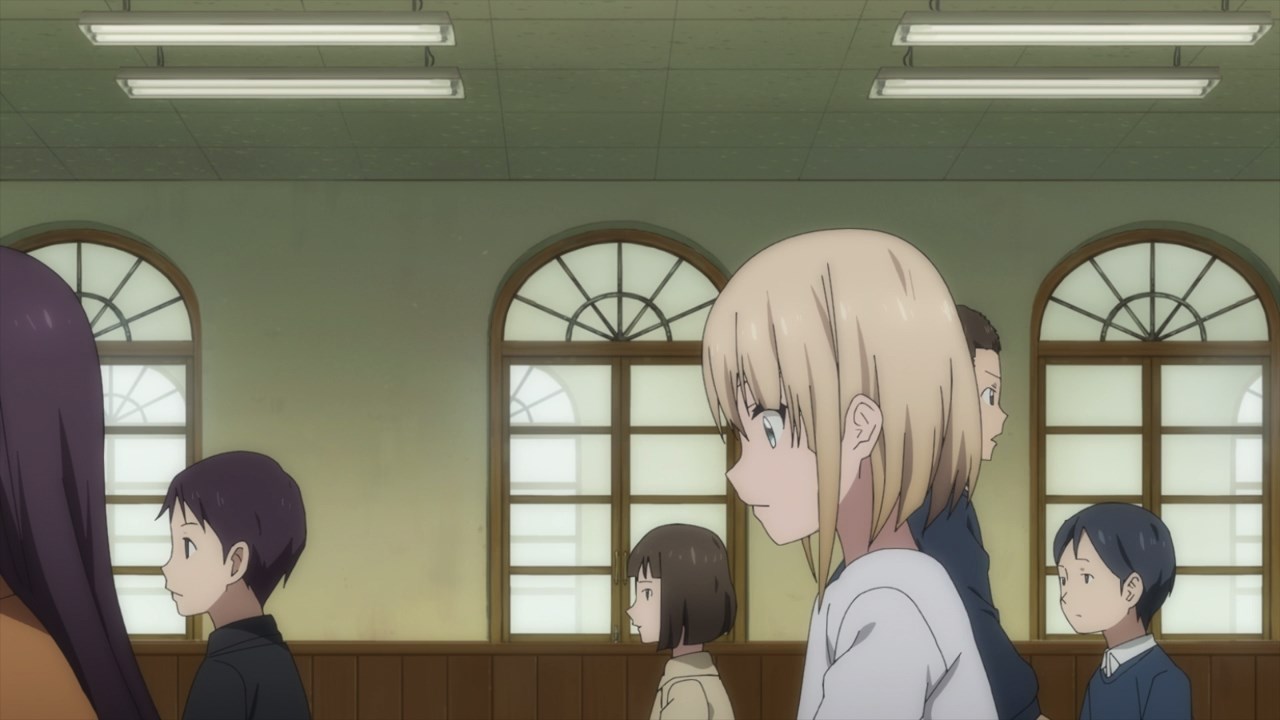 But in order to find some answers, we need to go back in time where Nicole was just an elementary school student and she’s about to have a new transfer student. 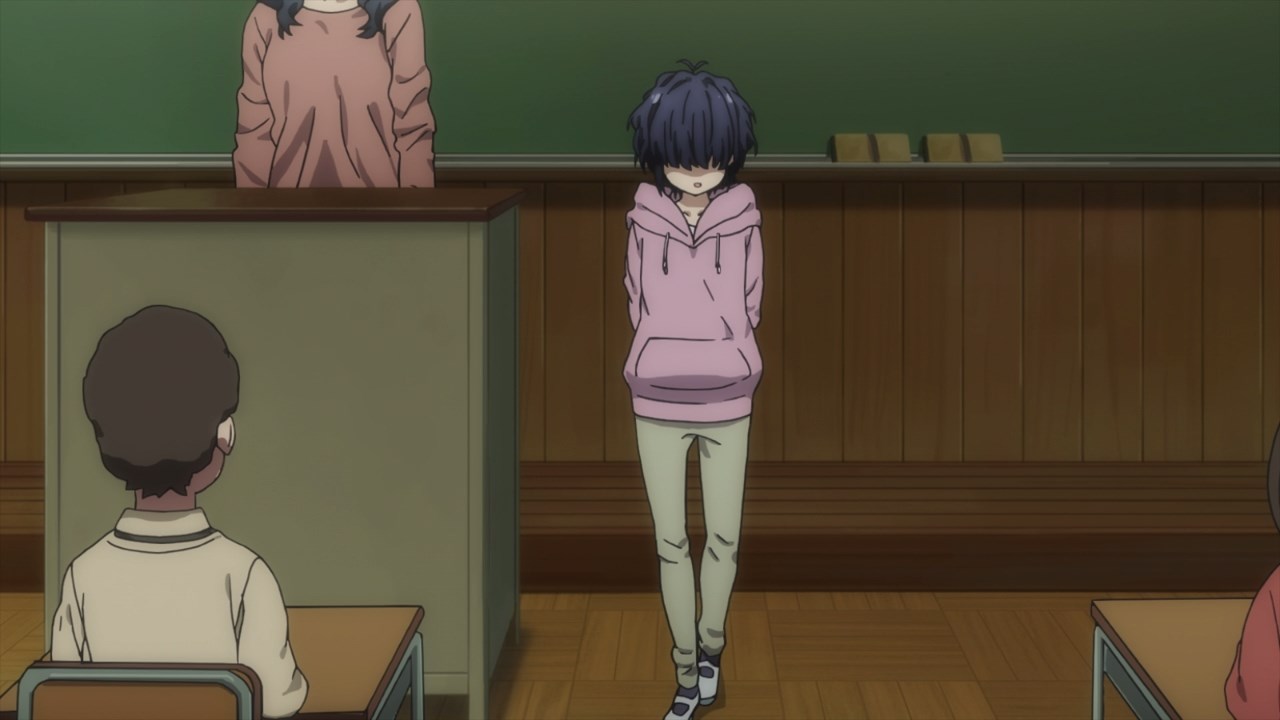 Said student happened to be Miu Takigawa. Wait, did Nicole happened to know Miu back when she was just a child, or is that Saitou forgot that Takigawa was her grade school classmate until now?

Well then, looks like we’ll have to find those answers on the penultimate episode and really, we’re in for a wild ride in regards to Nanabun no Nijyuuni and their future.