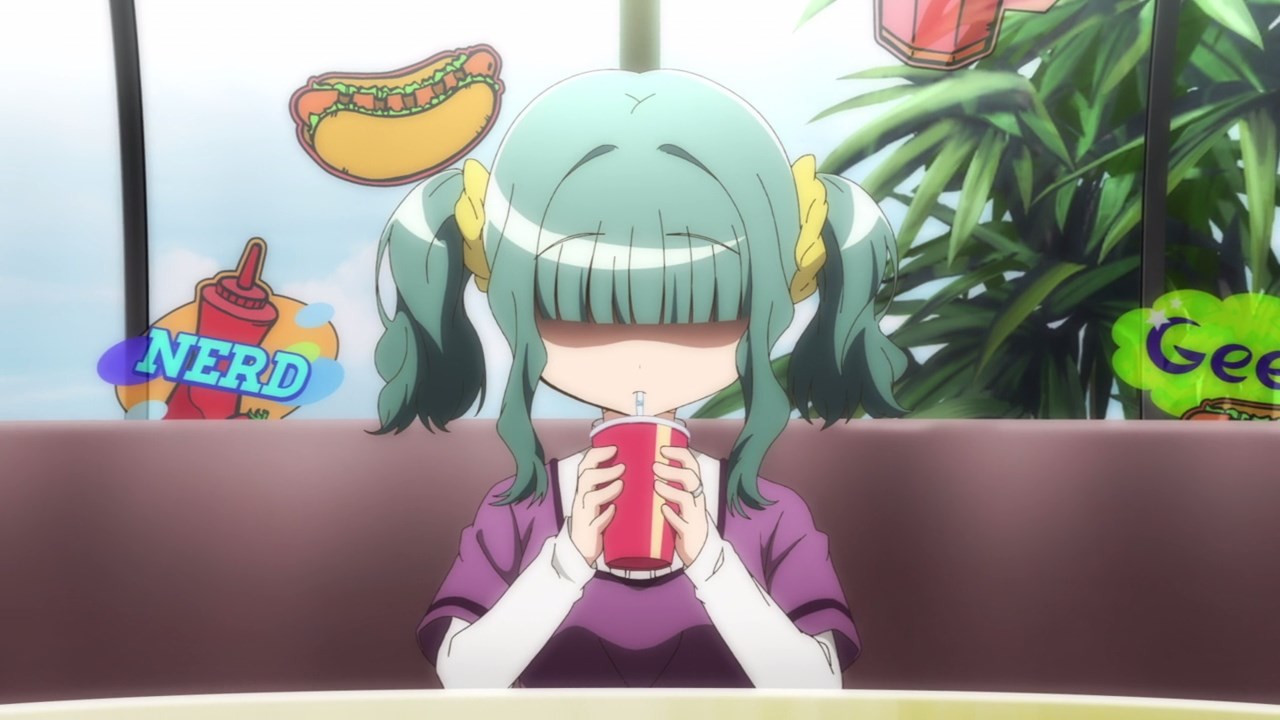 So, has anyone remembered the rumor about the Invisible Girl? Well, there is one in the form of this girl right here. But we’re gonna talk about her later… 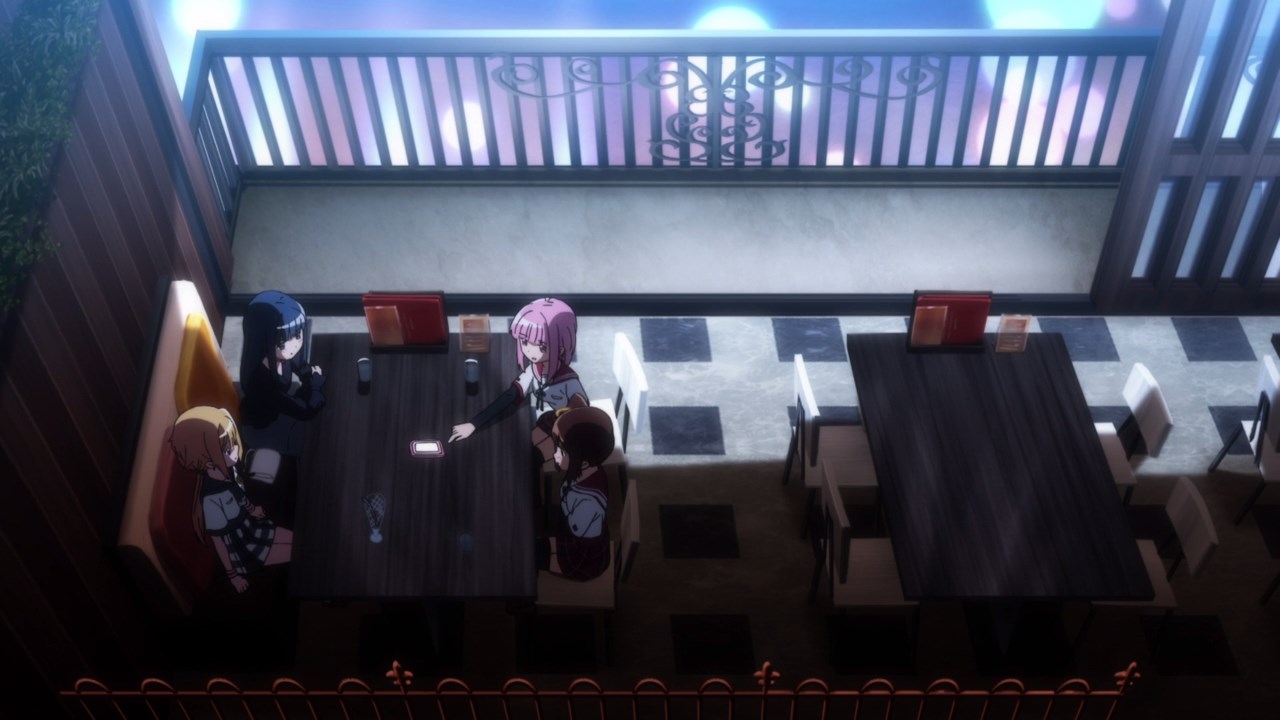 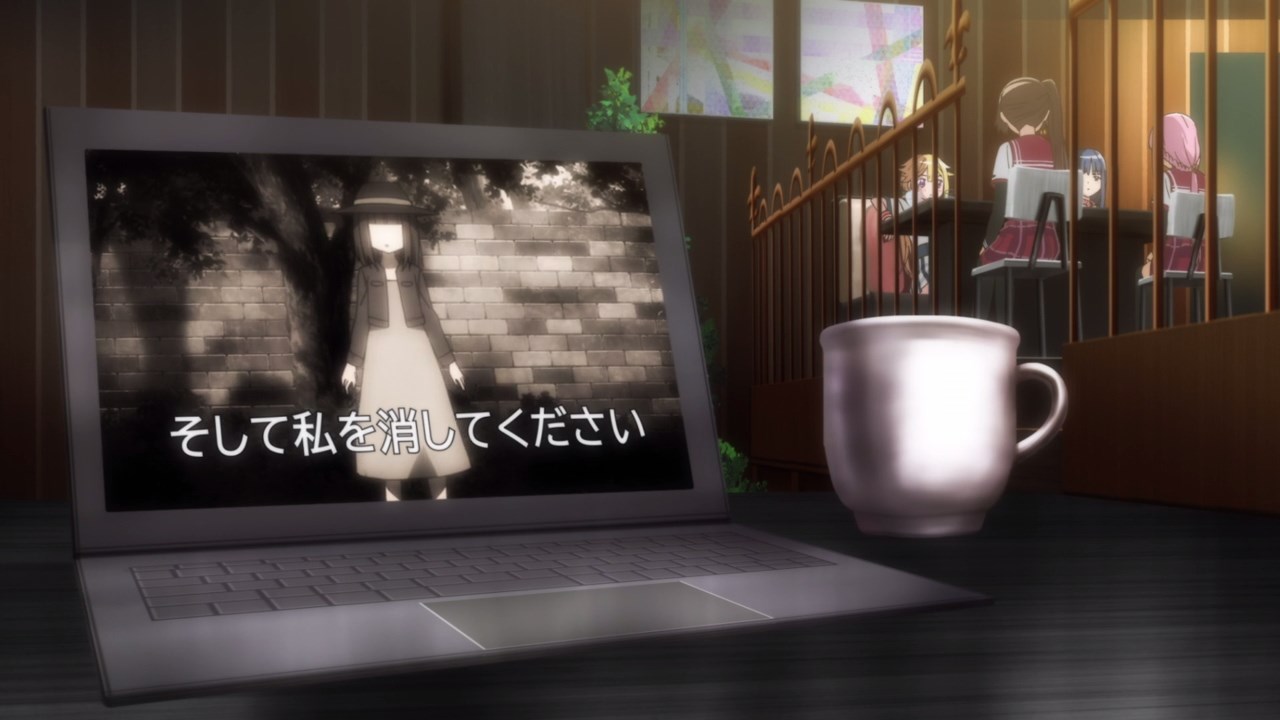 Rather, it was an AI who controls the Endless Solitude. Well, let’s just say that this AI has become an Uwasa at this point because of the rumors surrounding the broadcast tower.

Anyways, the AI told the magical girls that there’s someone who got trapped inside the Endless Solitude and begged them to rescue that person, as well as delete the AI so that no one will exploit it. C’mon, we don’t want The Wings of Magius get their hands on the AI or the Uwasa of the Endless Solitude. 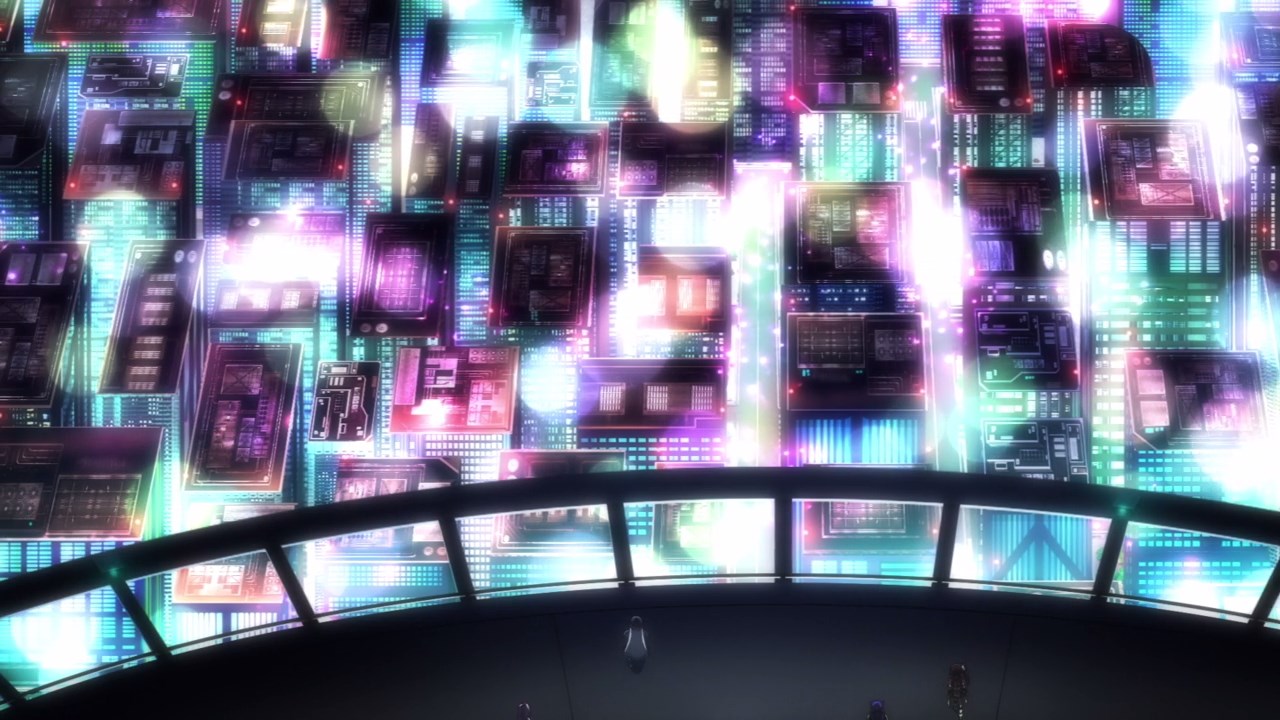 Unfortunately, there’s one problem when going inside the Endless Solitude as only one person would go there.

And this is where things get scarier as he/she must jump from the top of the tower in order to go inside the Endless Solitude. 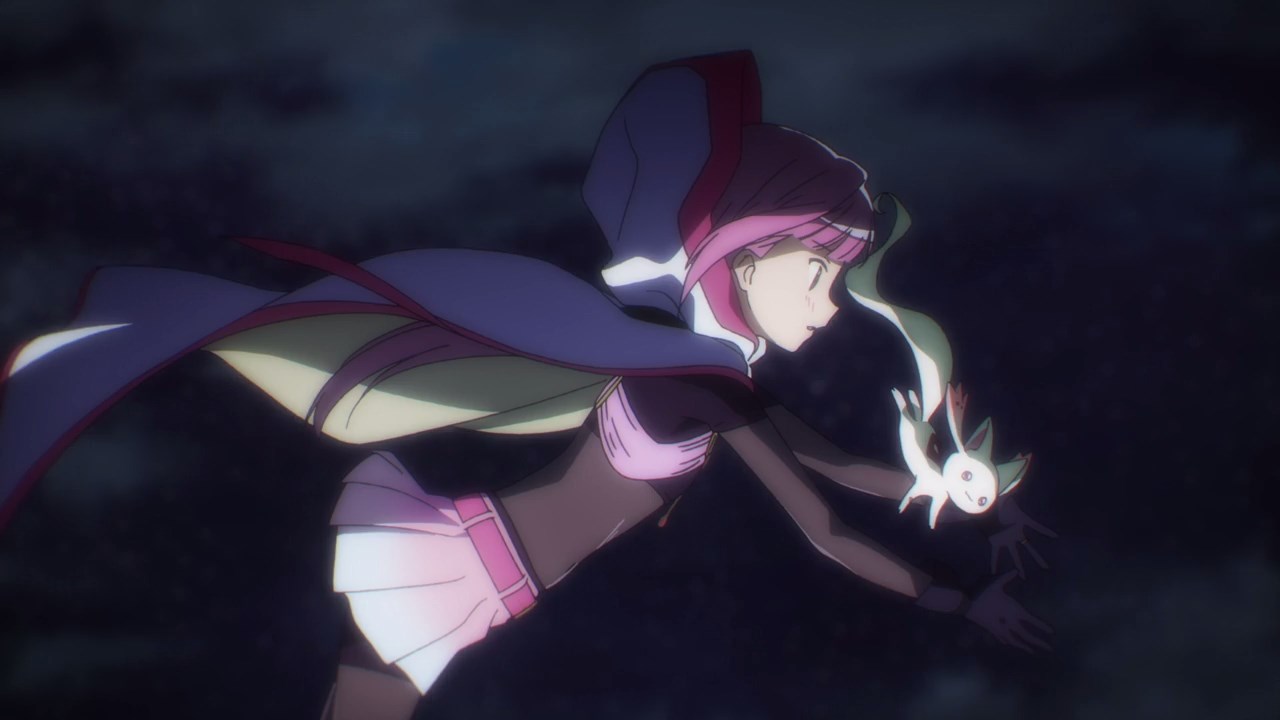 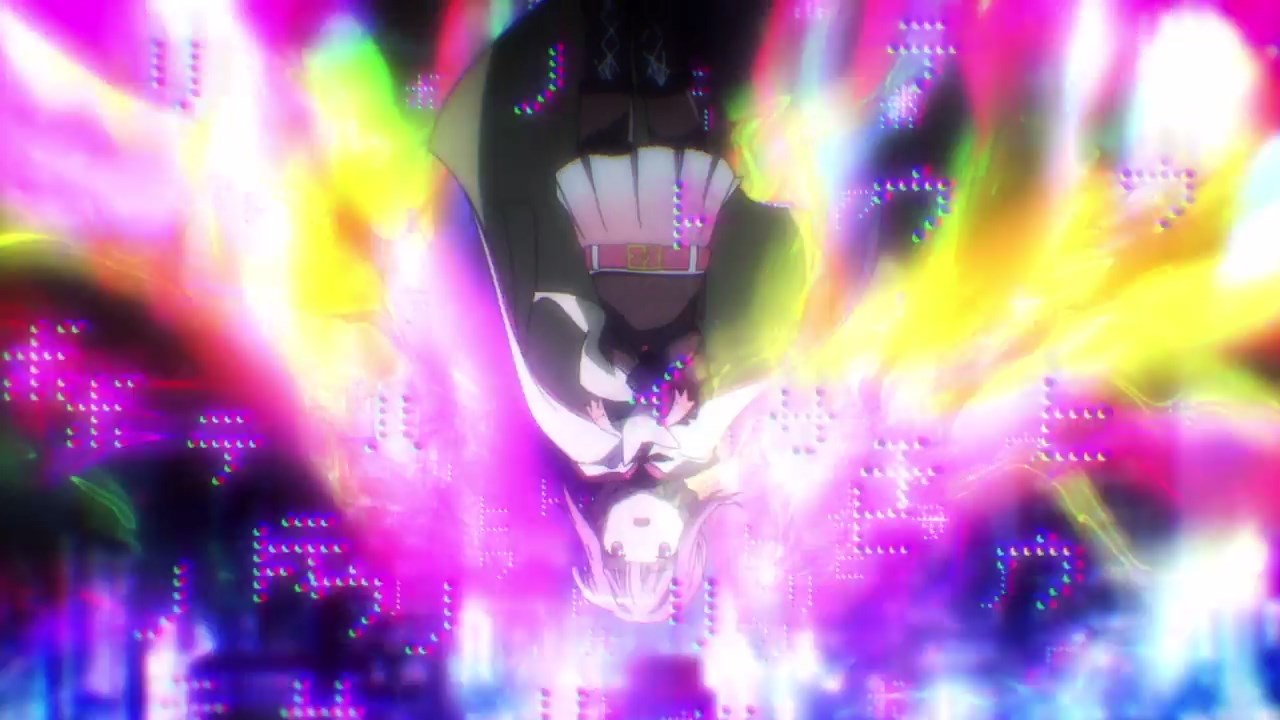 Well, there’s only one magical girl who can go there as Iroha Tamaki “accidentally” jump from the top of the tower upon rescuing Lil’ Kyubey.

Goddammit Lil’ Kyubey, you’re putting Iroha into harm’s way when you appear out of nowhere! 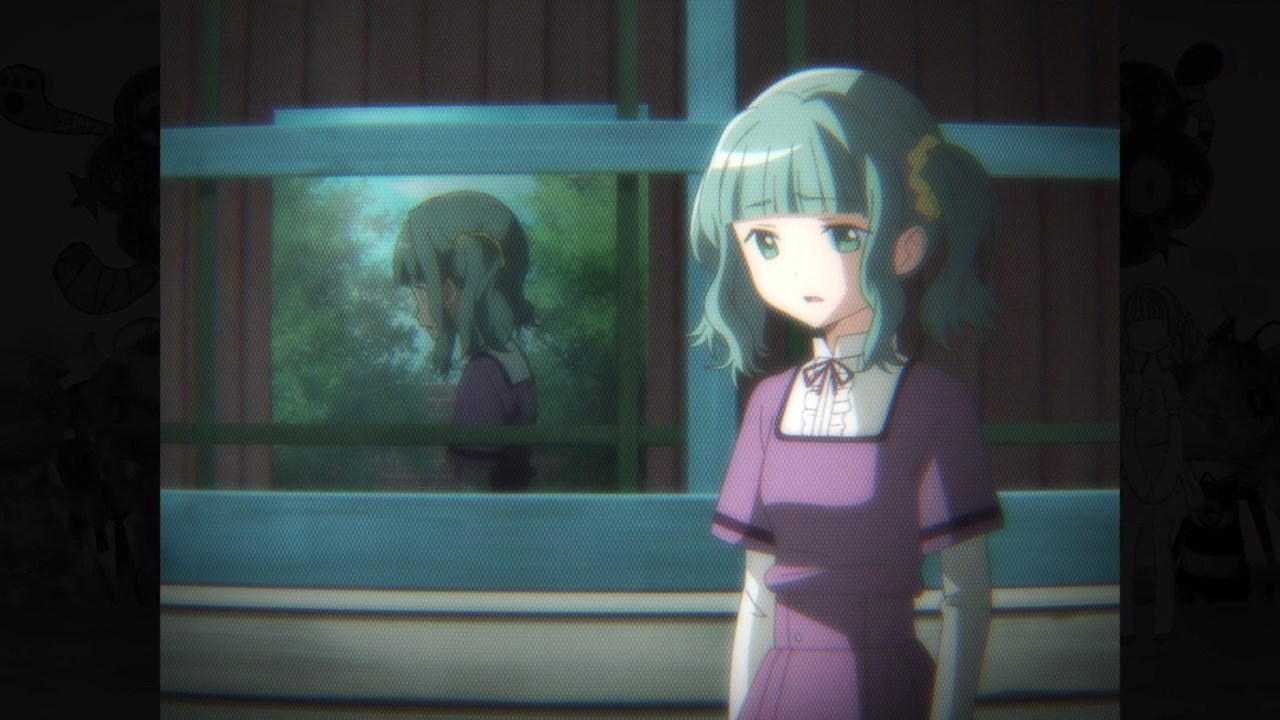 Now then, let’s talk about the person who got trapped inside the Endless Solitude.

This is Sana Futaba who became a magical girl upon making a wish to Kyubey where she wants to become invisible. Hence, she’s the rumored Invisible Girl. 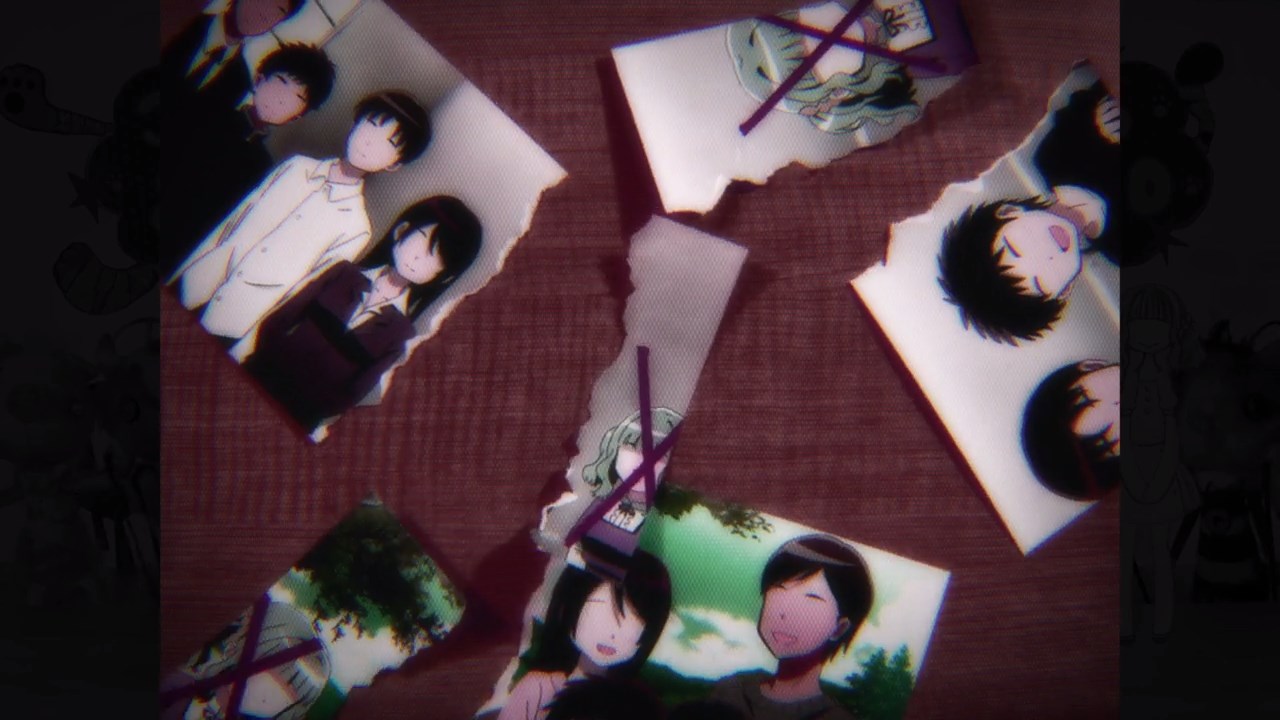 Of course, the reason why Sana became a magical girl is because her step-father despise her for not being a genius compared to her step-brothers. Eventually, Sana’s biological mother disowned her and thus she was cast aside.

You know, Sana’s family are one heartless bastards. Just because Sana doesn’t have a high academic prowess doesn’t mean that she’ll be treated as an outcast. Because of that, she went down to the rabbit hole and thus Sana end up being trapped inside the Endless Solitude. 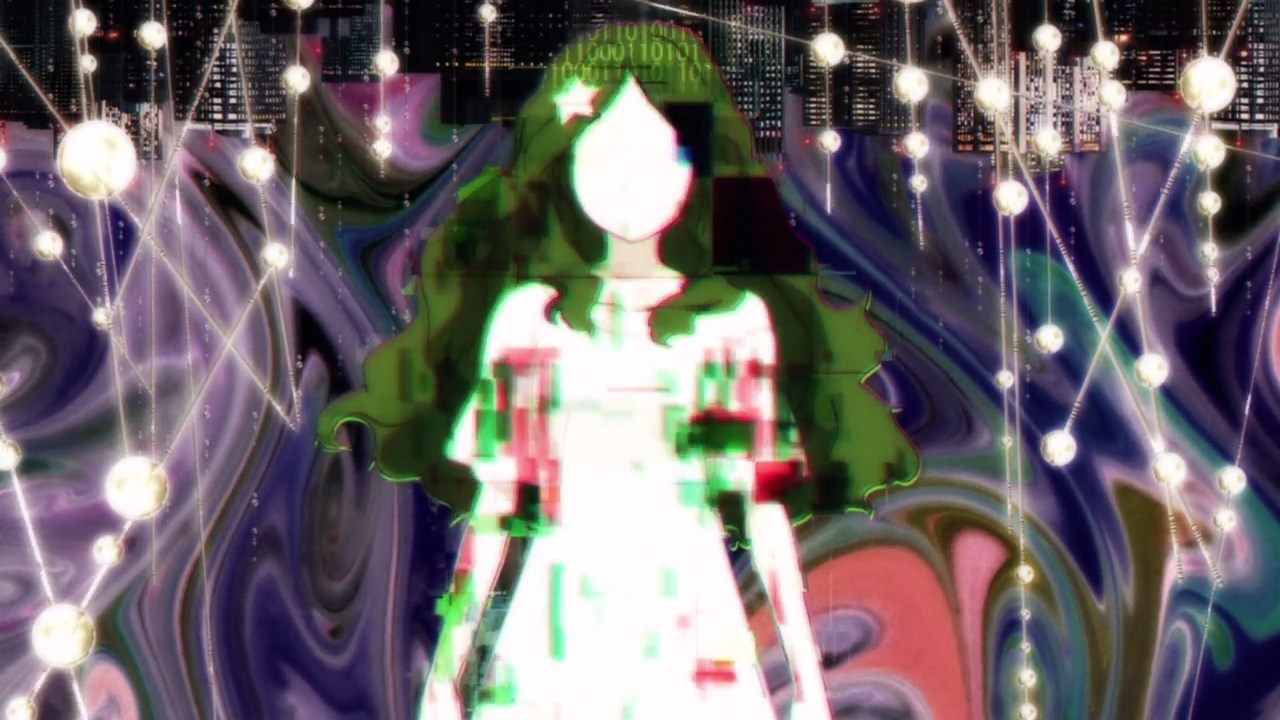 There, she met an AI who was also cast away because of its flaws. Because this AI doesn’t have a name and she was shown as a woman, Sana named it as Ai-chan. 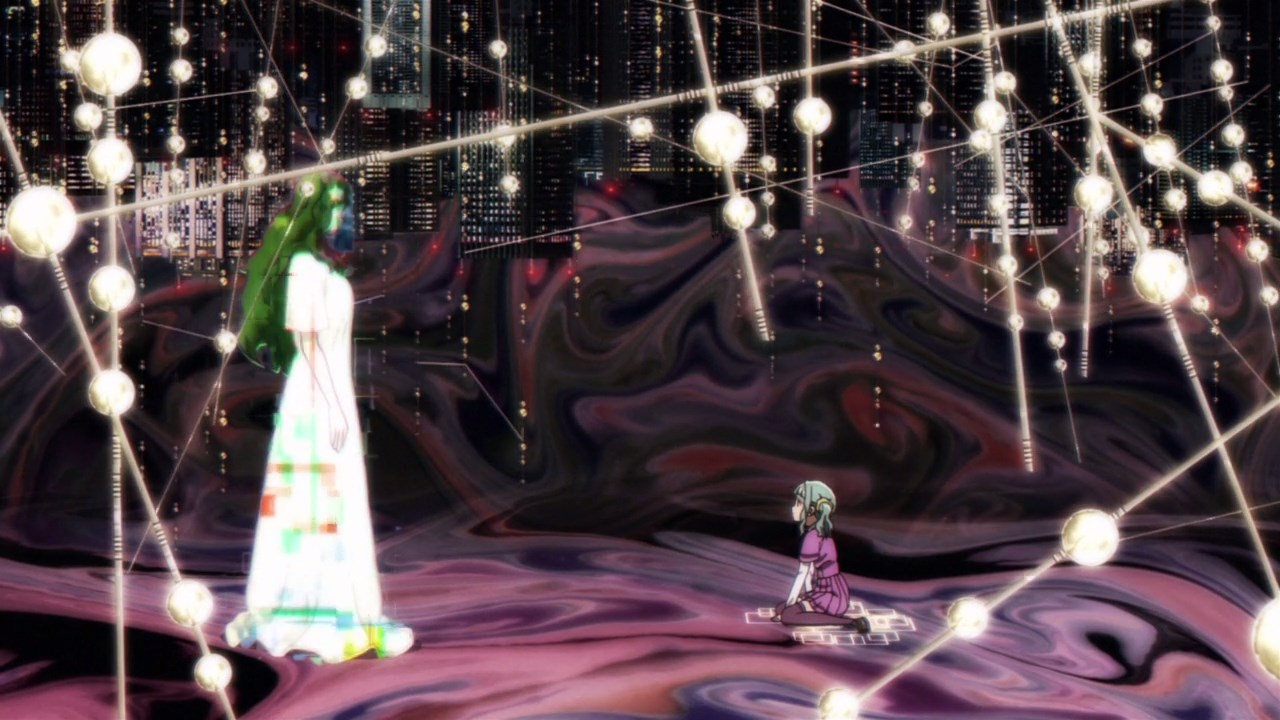 In any case, Sana Futaba spends her time with Ai-chan inside the Endless Solitude, not worrying about the outside world because no one cared for her anyway. 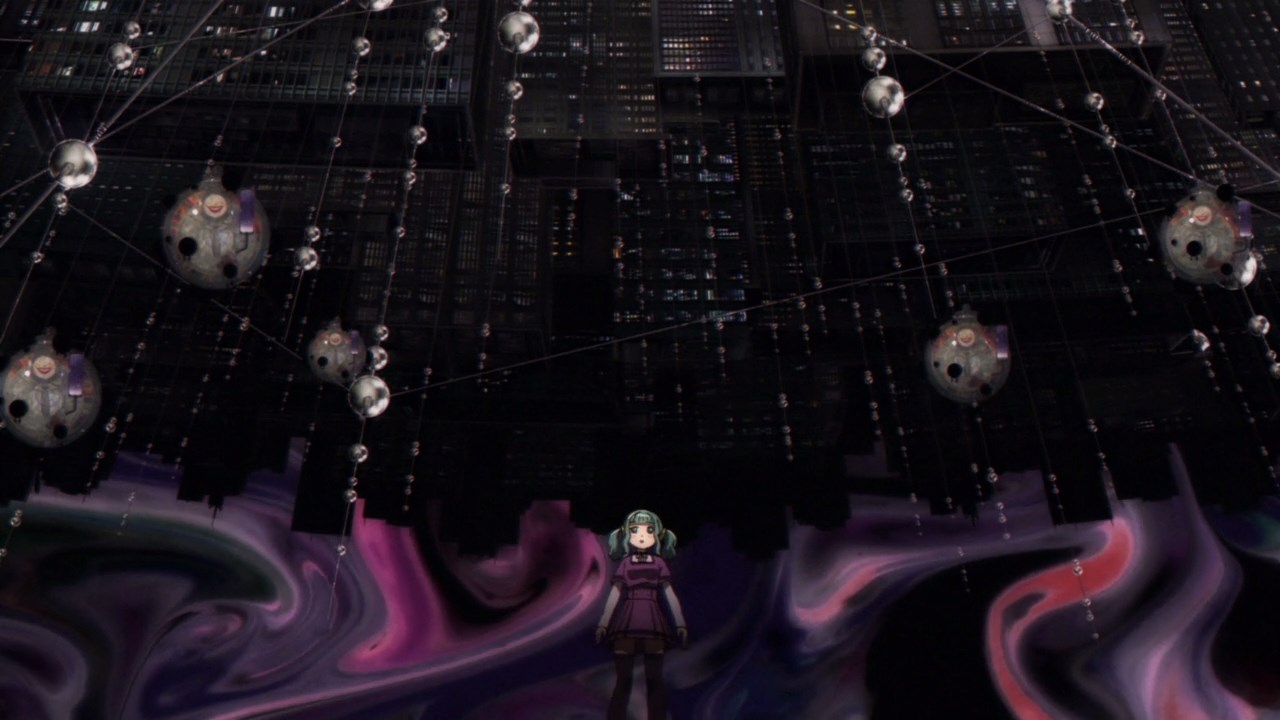 Of course, all things must come to an end as Sana Futaba saw a visitor inside the Endless Solitude. 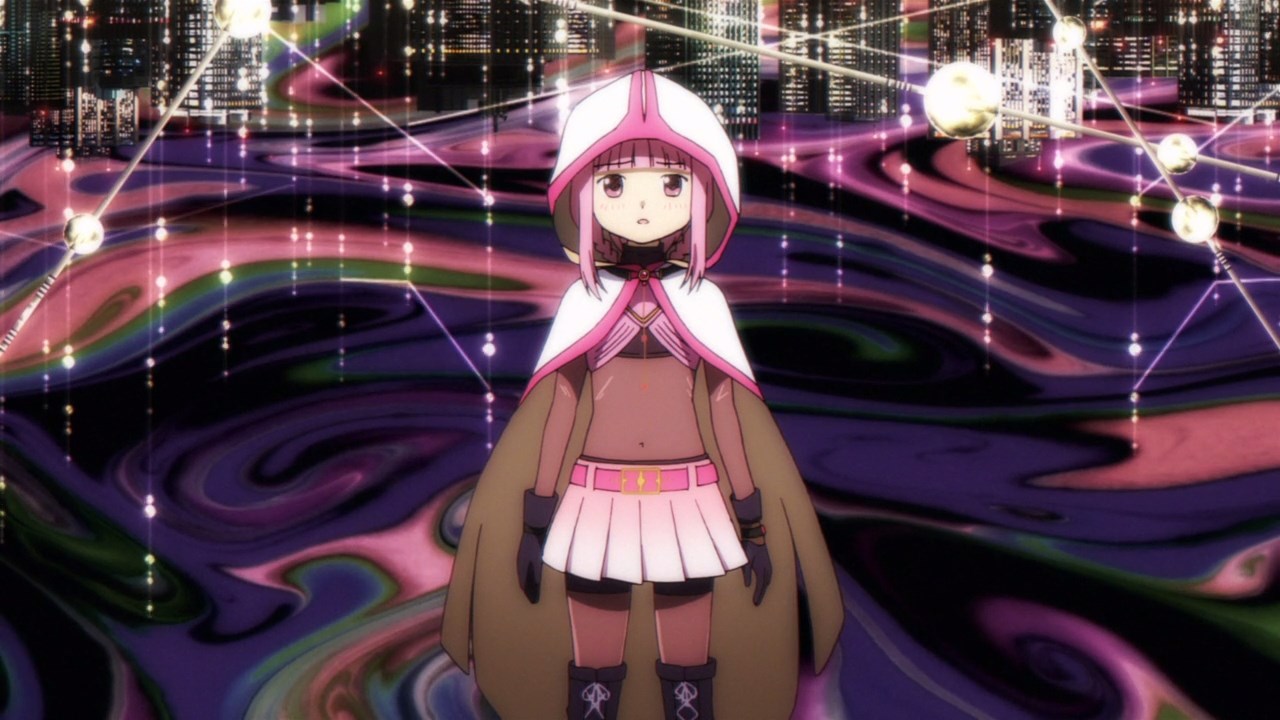 Said visitor happened to be Iroha Tamaki where she’s here to pick Sana Futaba up, but Sana refused to be rescued because the outside world is scary and she wants to remain here forever. 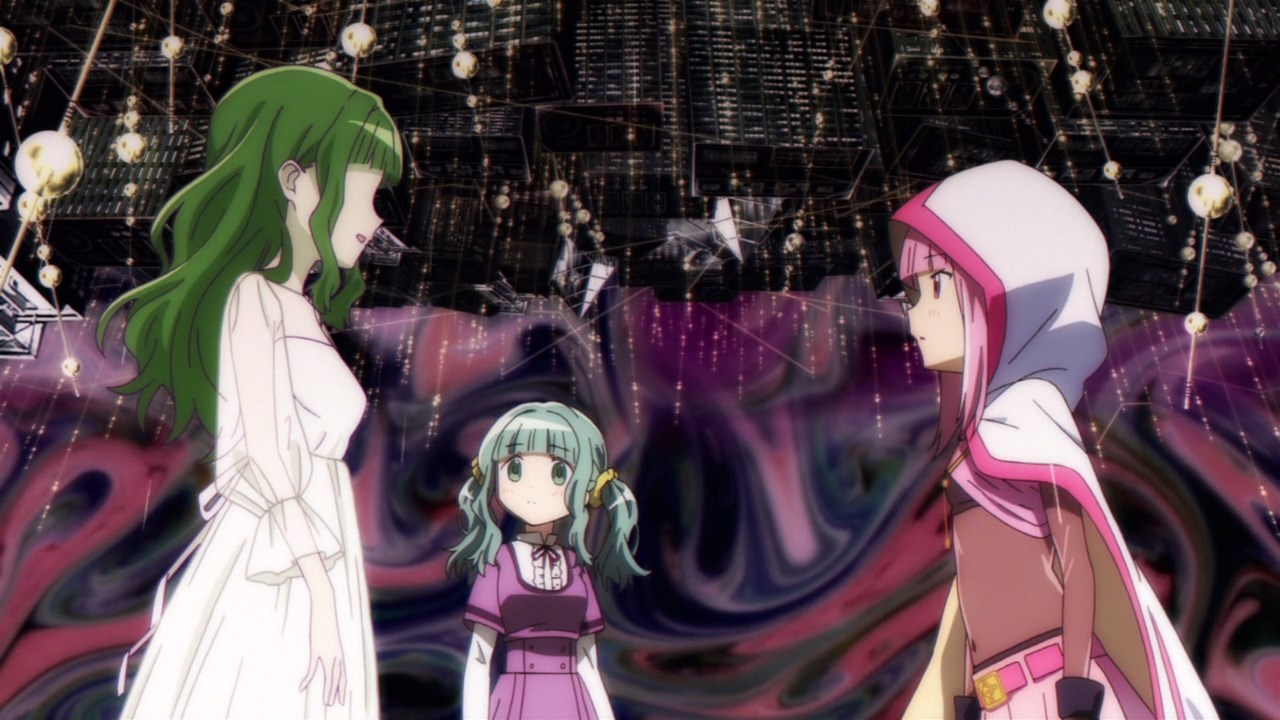 But, Ai-chan told Sana that the AI invited Iroha because time is running out and someone might seize the opportunity to exploit the Endless Solitude. 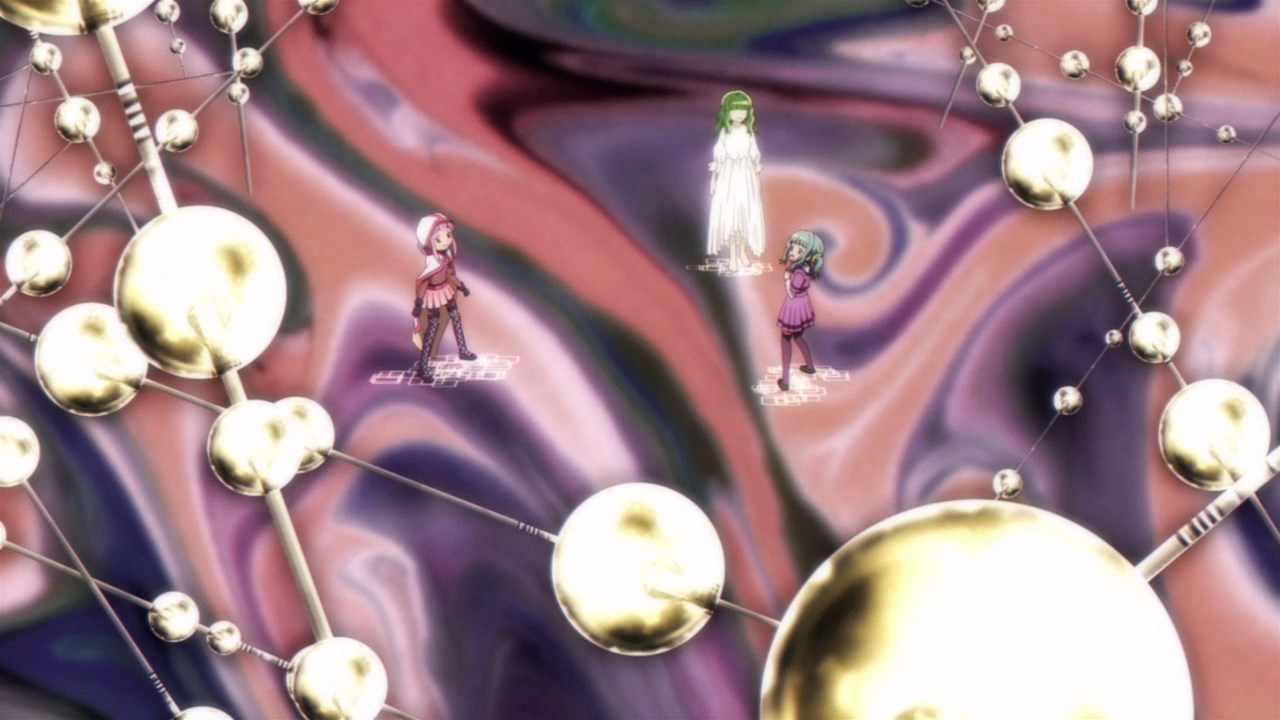 Unfortunately, someone infiltrated the Endless Solitude where I have a feeling that a magical girl from The Wings of Magius has arrive to seize the Uwasa. 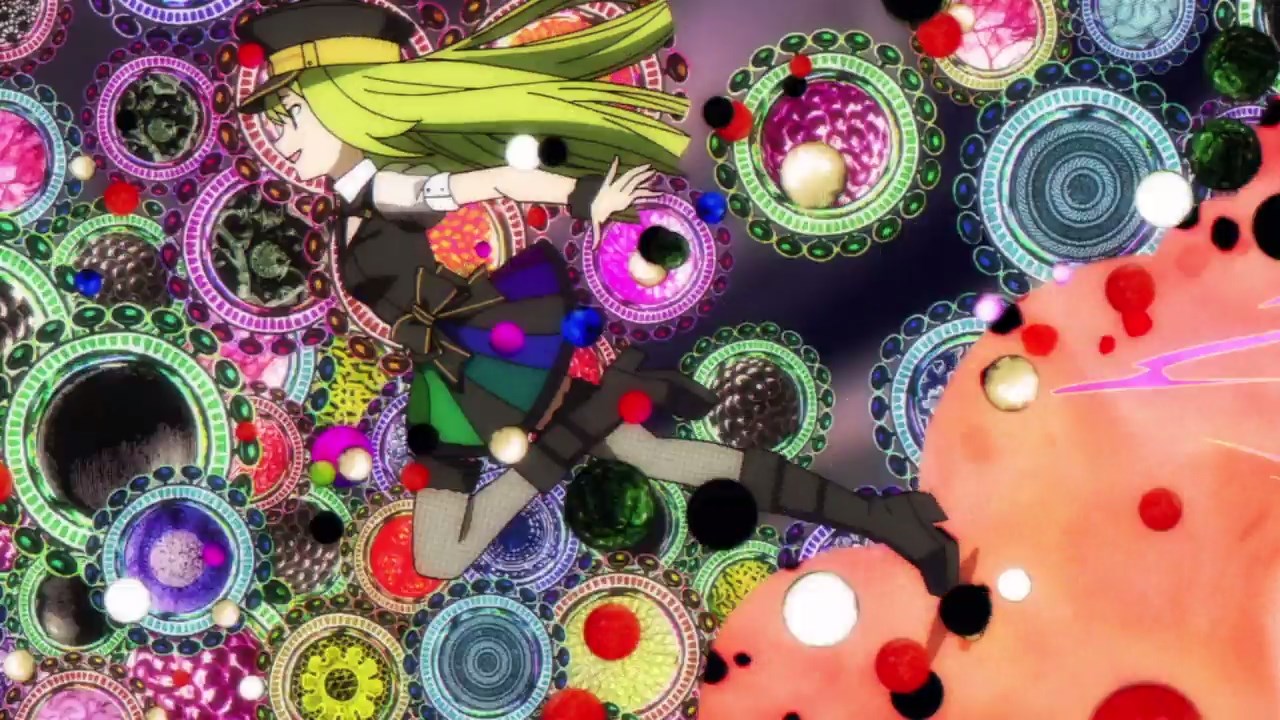 Anyways, this is Alina Gray as she’s gonna take the AI or the Uwasa of the Endless Solitude. 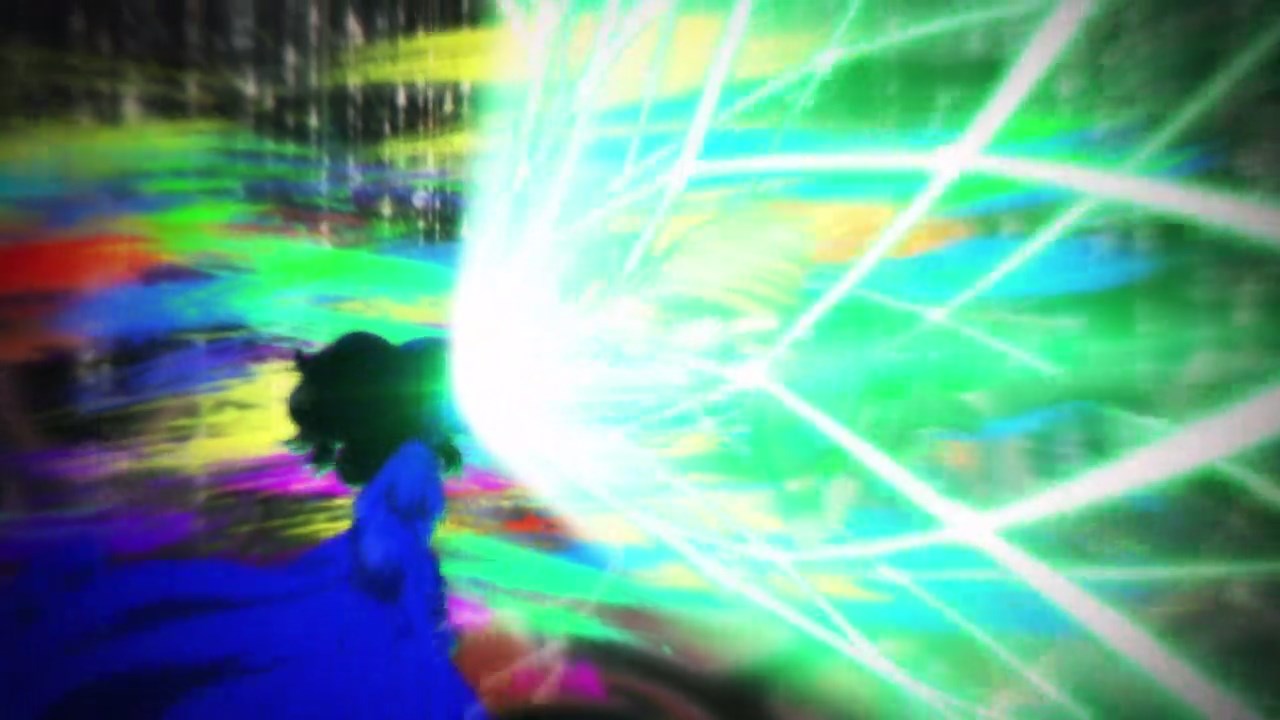 Of course, she’s gonna corrupt the AI so that it’ll become very malicious.

Good for Magius as they want to create a stir within Kamihama City, bad for those magical girls who don’t want to deal with a rumor getting out of proportions, especially Yachiyo Nanami. 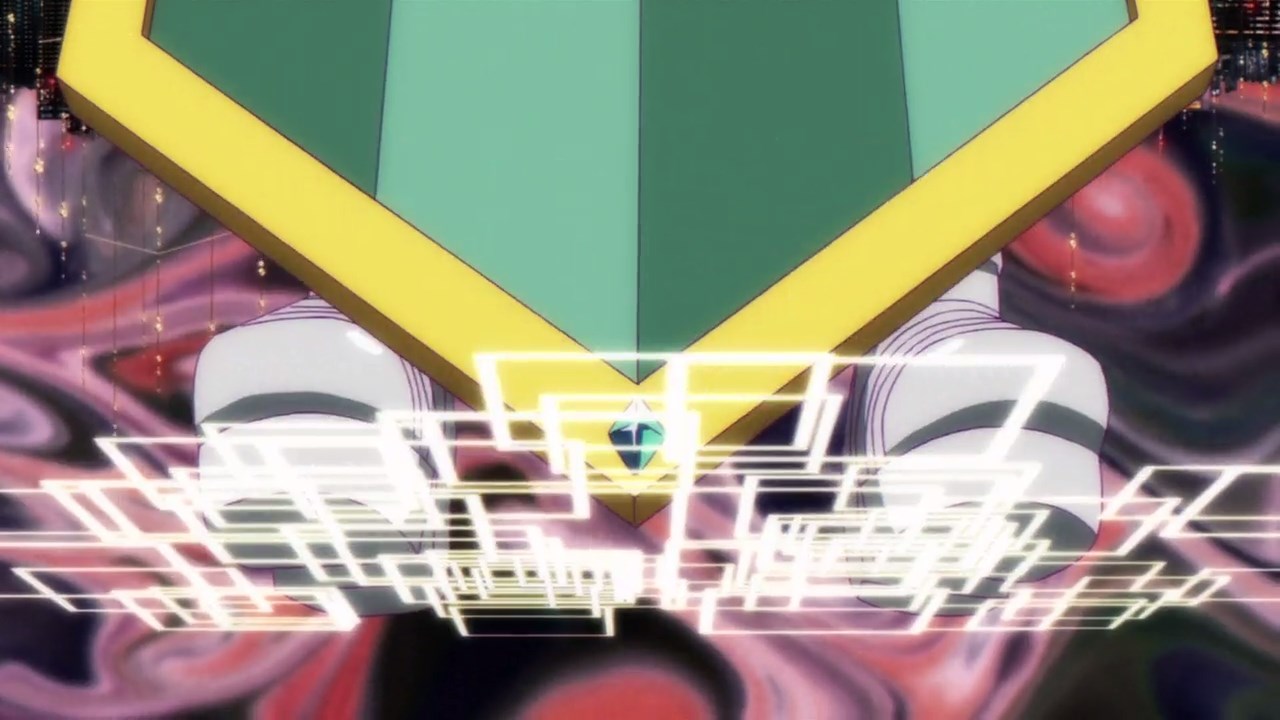 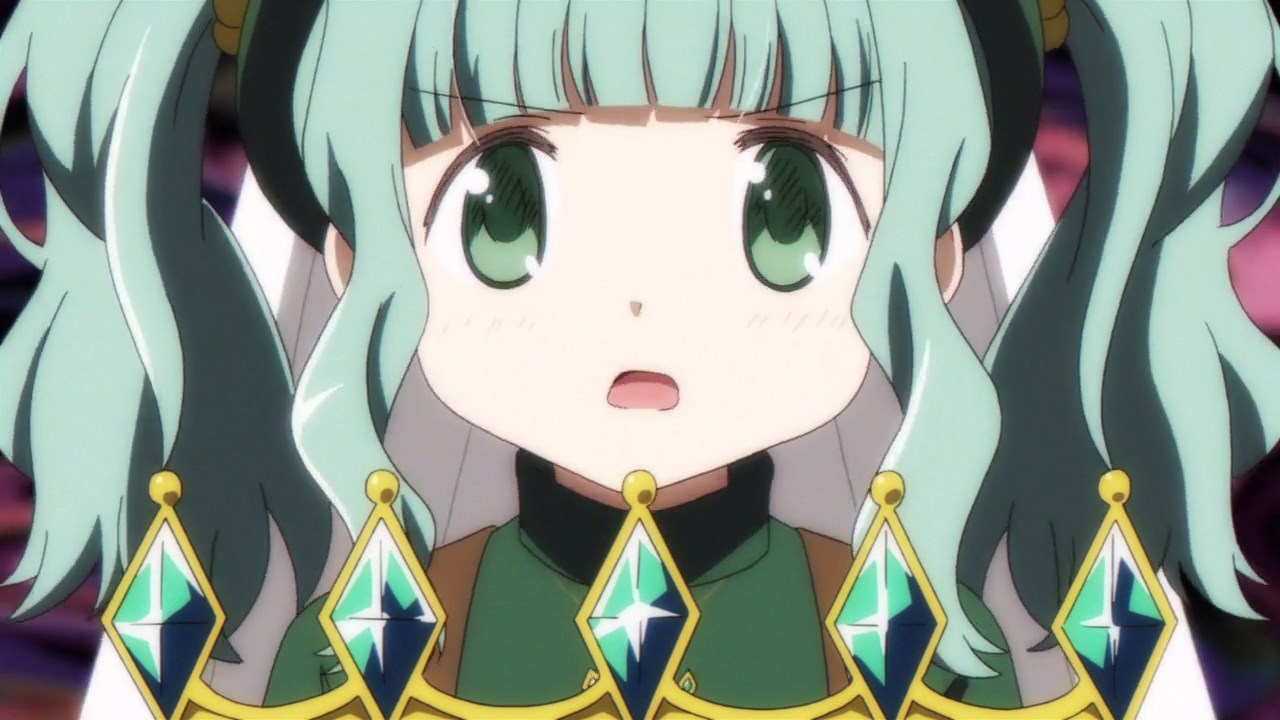 On the other hand, Sana Futaba had enough as she transforms into a magical girl and tries to defend Ai-chan from Alina Gray. 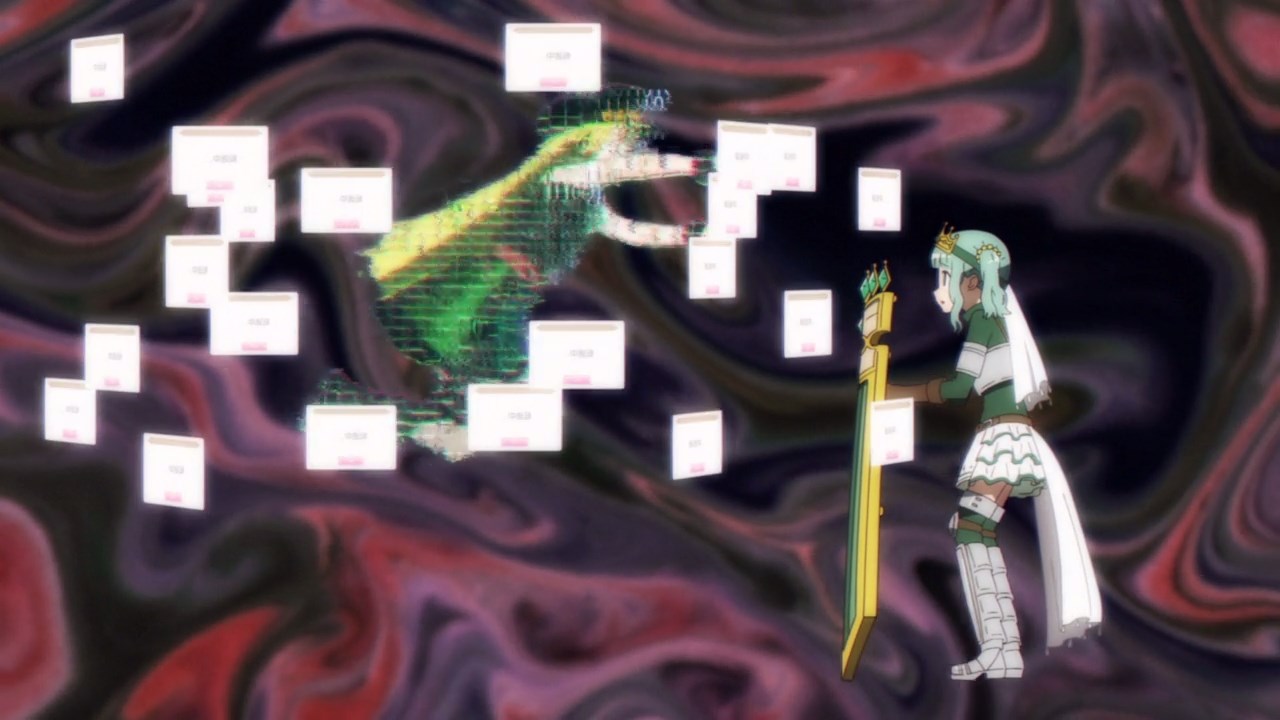 Unfortunately, Sana doesn’t need to fight Alina as Ai-chan sends the intruder to another place.

Sorry Alina Gray, but you’re not gonna mess around inside the Endless Solitude anymore! 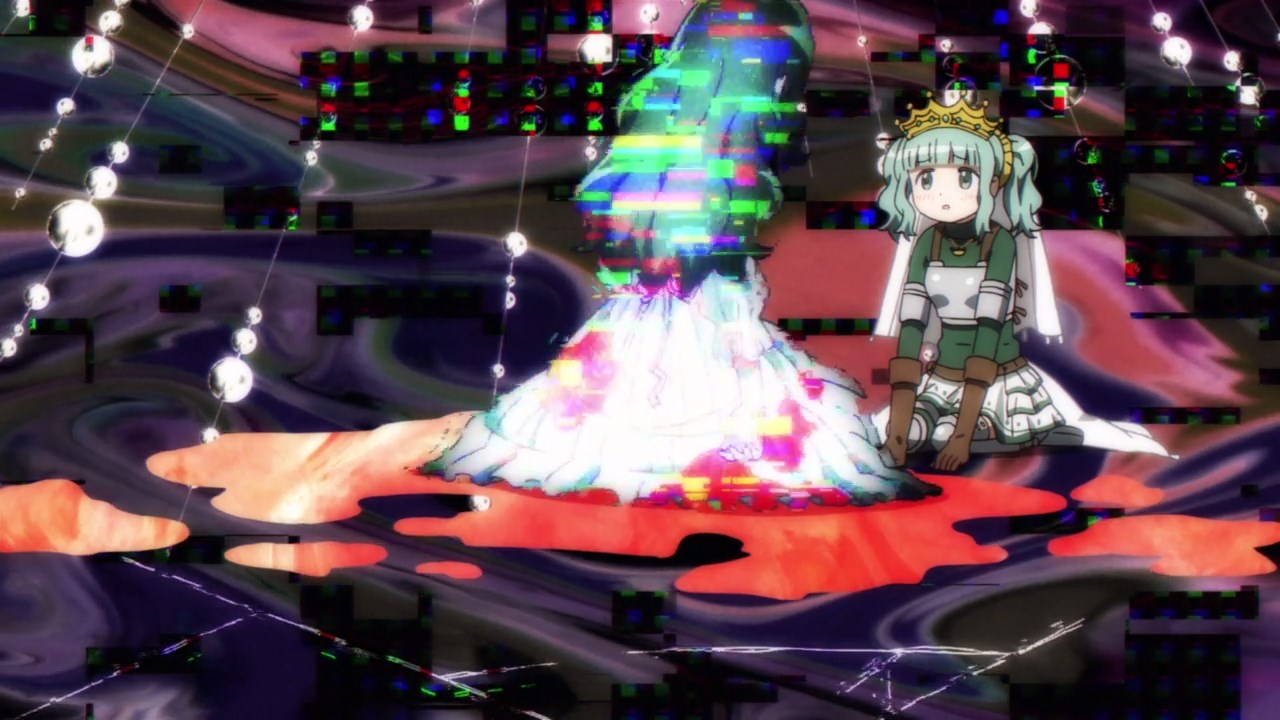 However, Ai-chan used a lot of energy that the AI collapsed and thanks to Alina’s attacks, Ai-chan will slowly become a corrupted Uwasa. 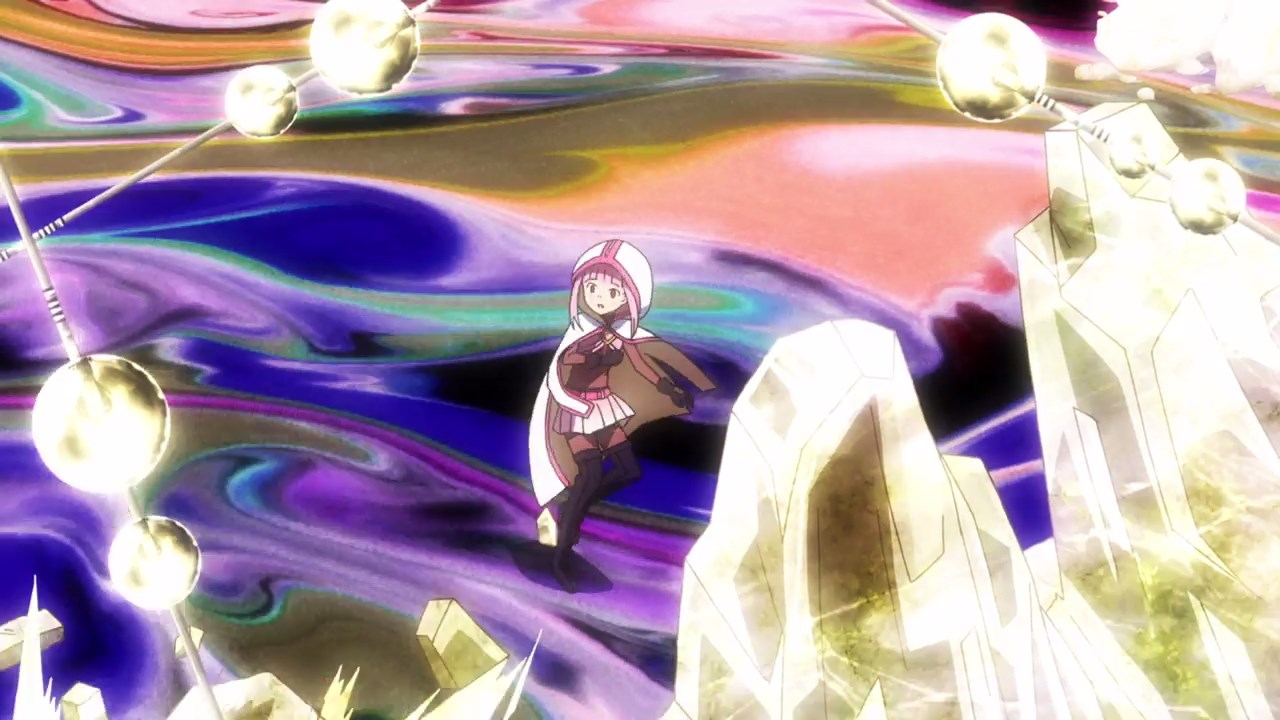 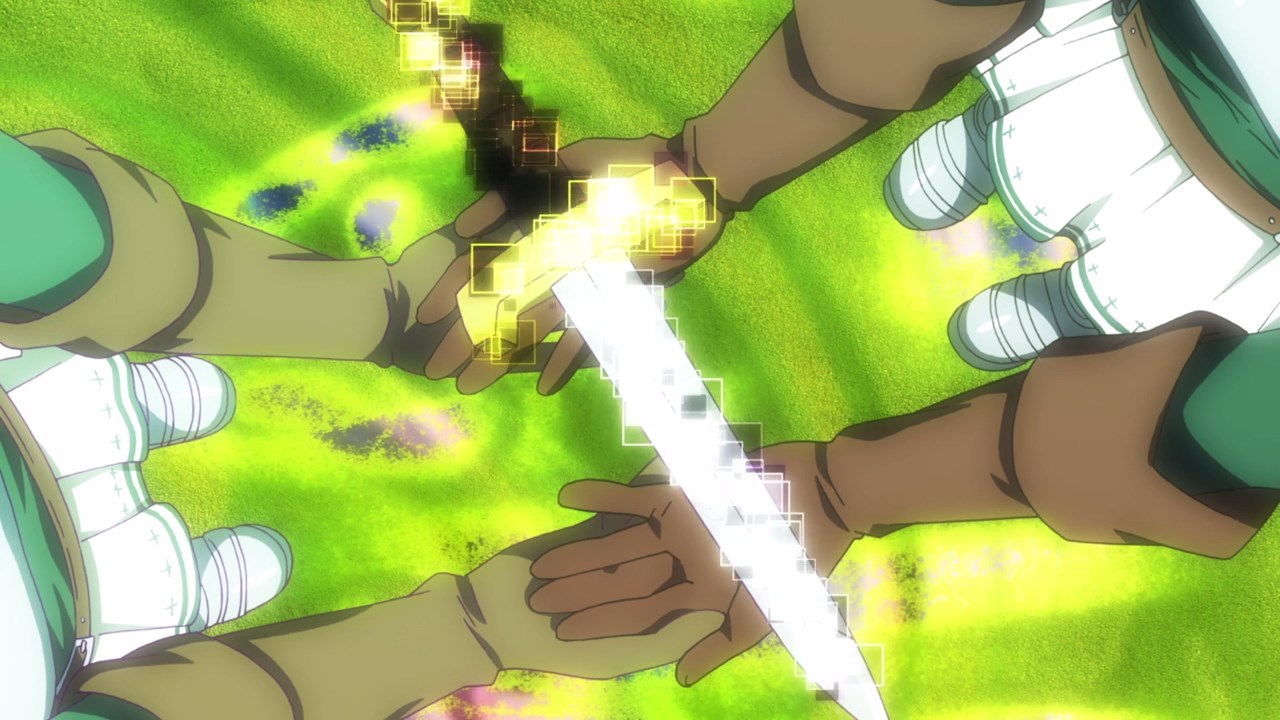 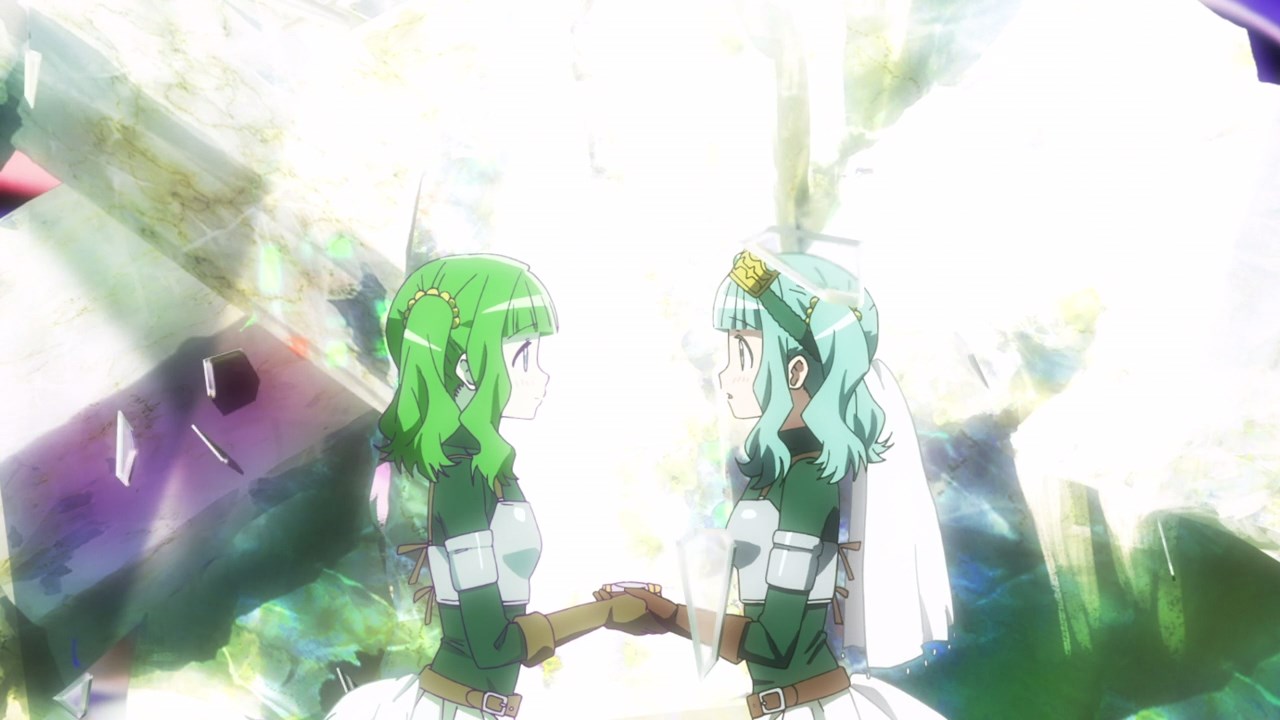 With that said, Ai-chan told Sana Futaba to end its life. Otherwise, The Wings of Magius might exploit the AI to their bidding.

Of course, this puts Sana in a bind on whether to kill her only friend or not. Not only that, but Alina Gray might come back to take the AI and turn into a malicious Uwasa. 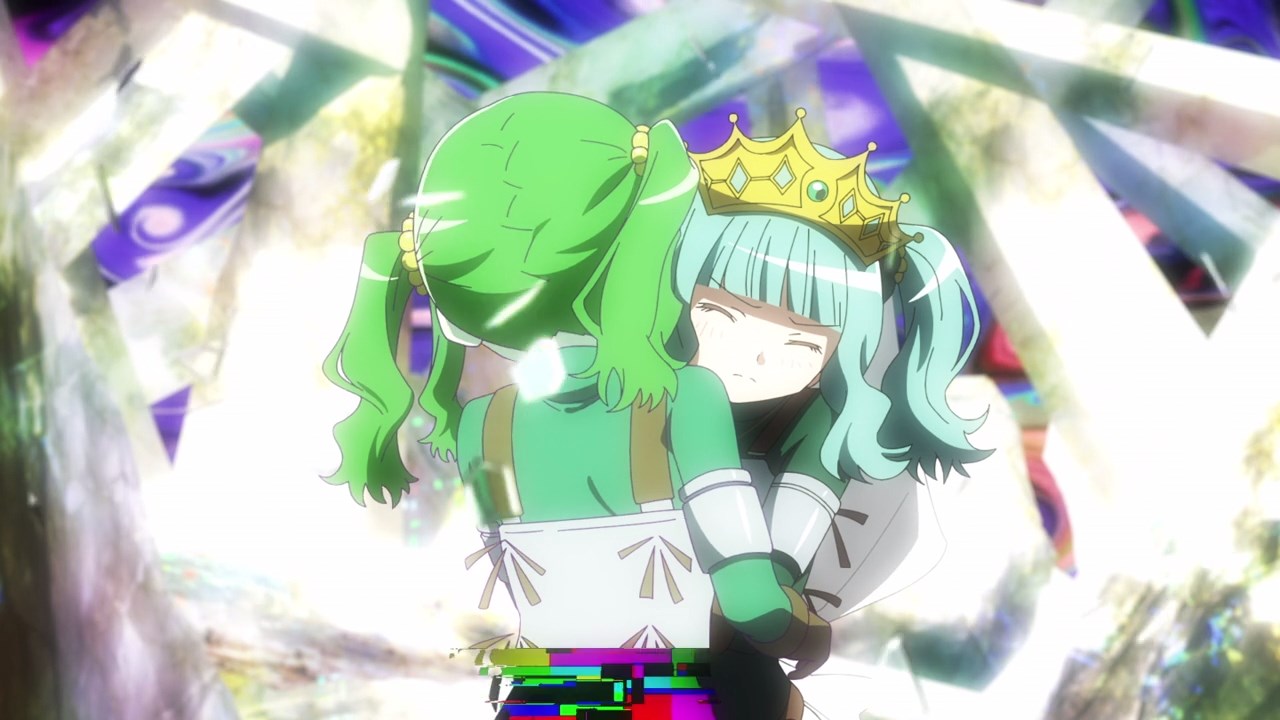 But after careful consideration, Sana Futaba decides to end Ai-chan’s life by stabbing the AI in the belly. Well, this is a tear-jerking way to say goodbye a dear friend. 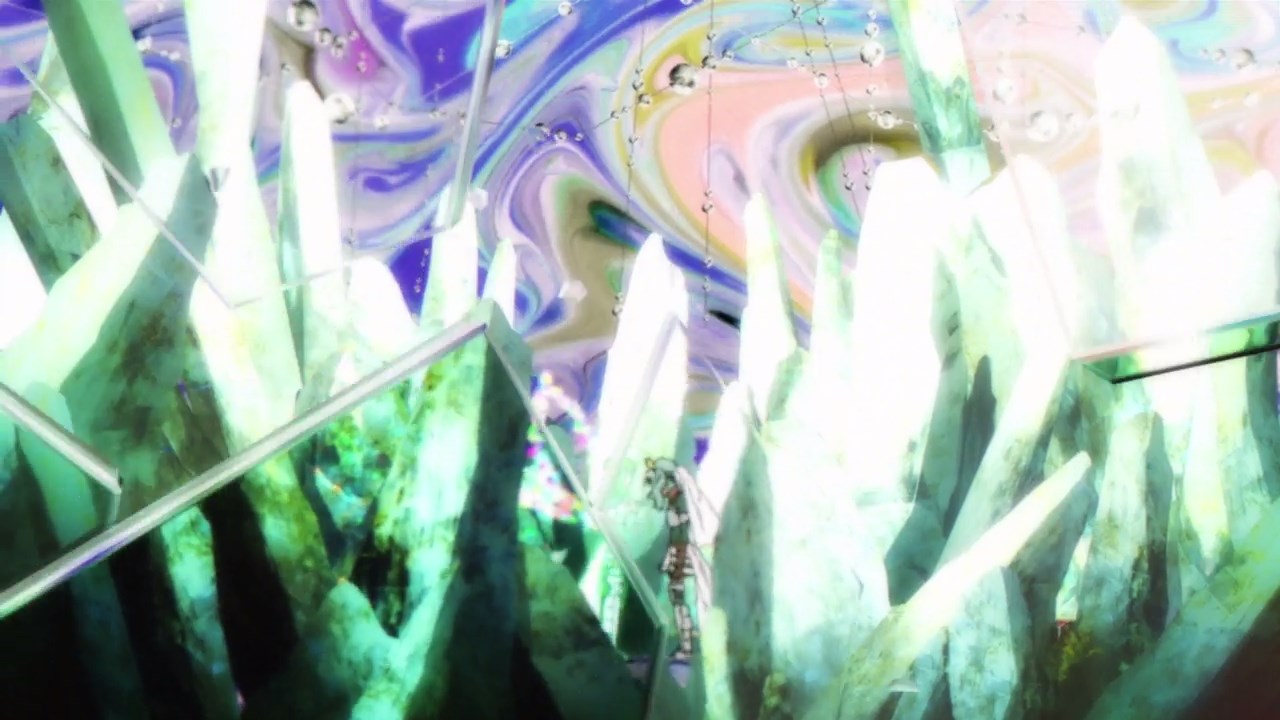 And so, Ai-chan has died at the hands of Sana Futaba, meaning that The Wings of Magius won’t use the AI anymore.

Of course, the only thing that worries me is the safety of both Iroha and Sana as the Endless Solitude is gonna collapse. 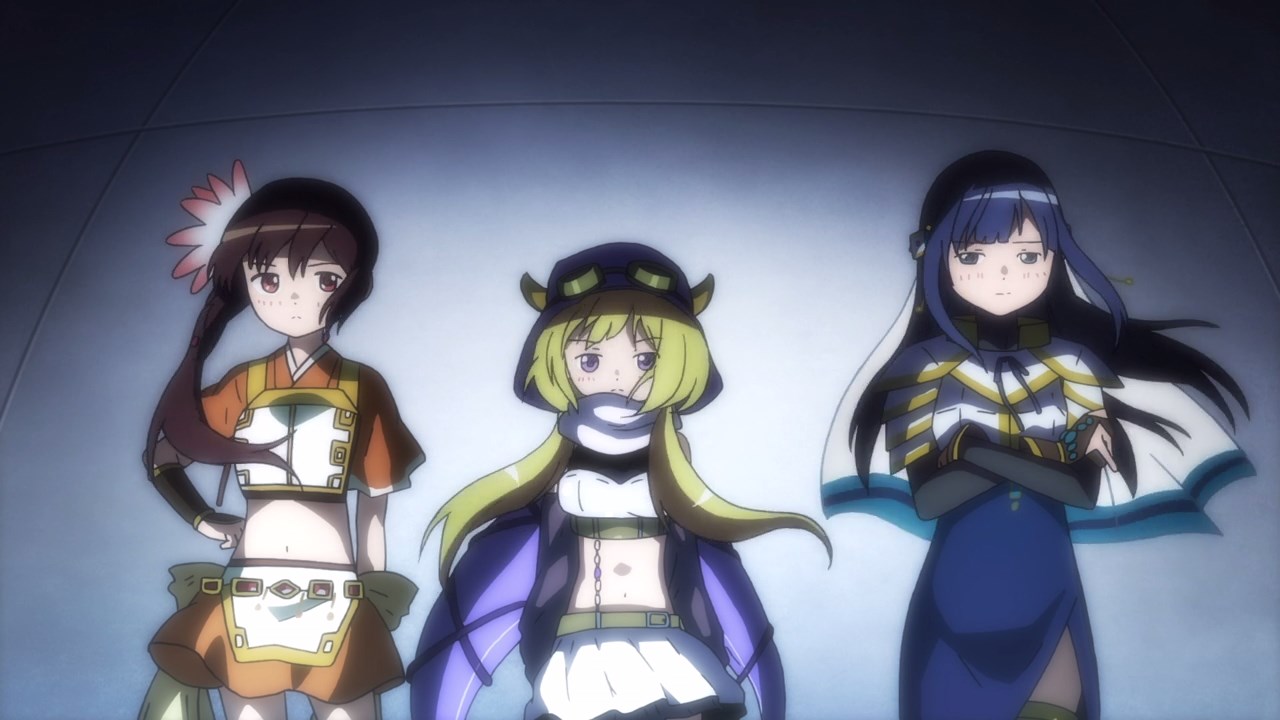 Meanwhile, Yachiyo Nanami and the rest are searching for Iroha Tamaki as they’re worried that their fellow magical girl has failed to save Sana Futaba. 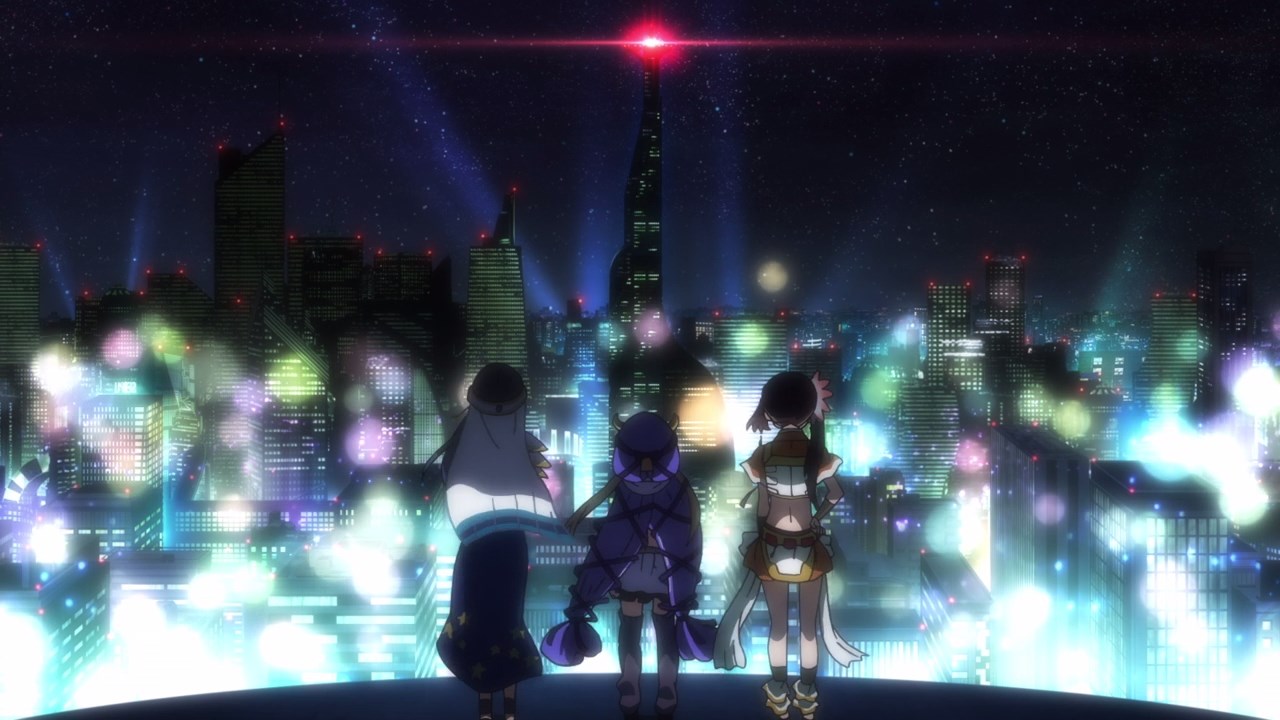 But then again, they felt a hunch that Iroha and Sana are inside Kamihama Central Tower. Let’s hope that they’re safe there or Alina might beat them as payback for being sent away.

I have to admit that Sana Futaba’s life is very sad because not only her family abandoned her, but Sana lost her dear friend in the Endless Solitude despite being a sentient AI. But anyways, see ya next time!