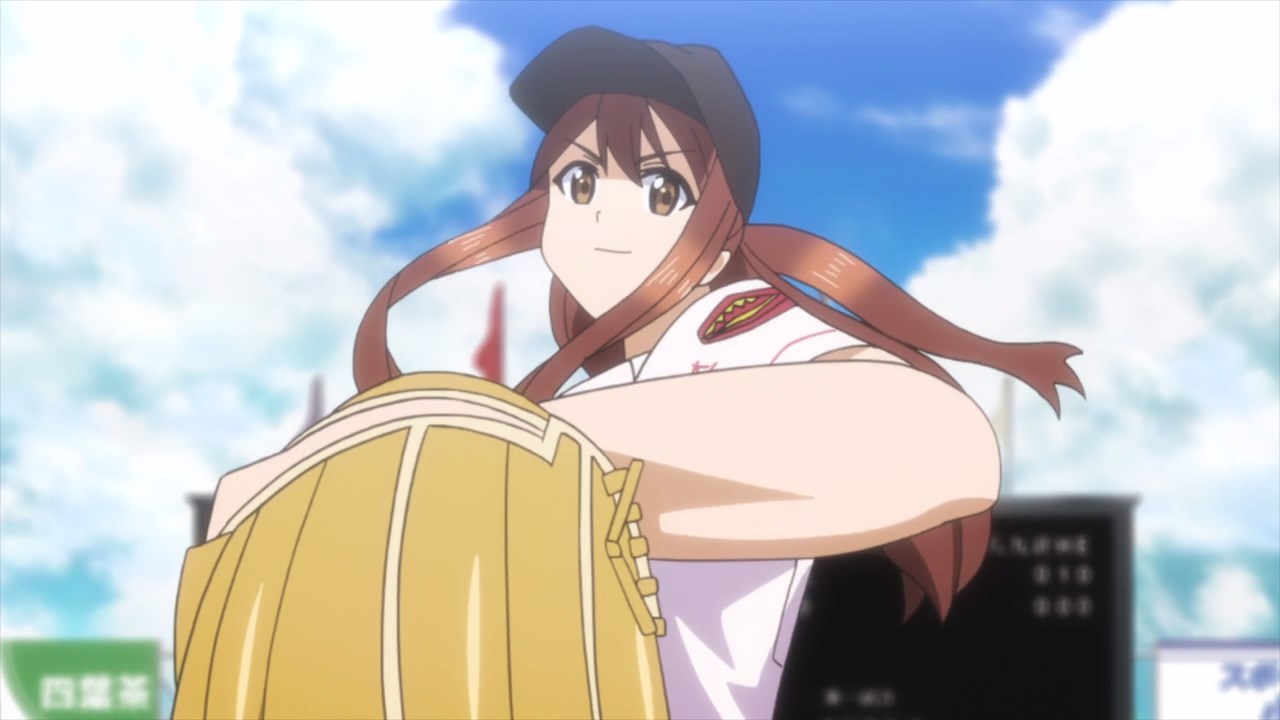 Well everyone, this is the story of a certain girls’ baseball club in Shin Koshigaya High School where they do their upmost best to reach the national tournament.

Okay, this is another Manga Time Kirara title by Mountain Pukuichi and Studio A-Cat, the latter is best known for their anime adaptation of Frame Arms Girl. While there will be yuri, this show is treated as a shonen sports anime. Oh and if you remember watching Hachigatsu no Cinderella Nine, you’ll see some resemblances to Tamayomi. 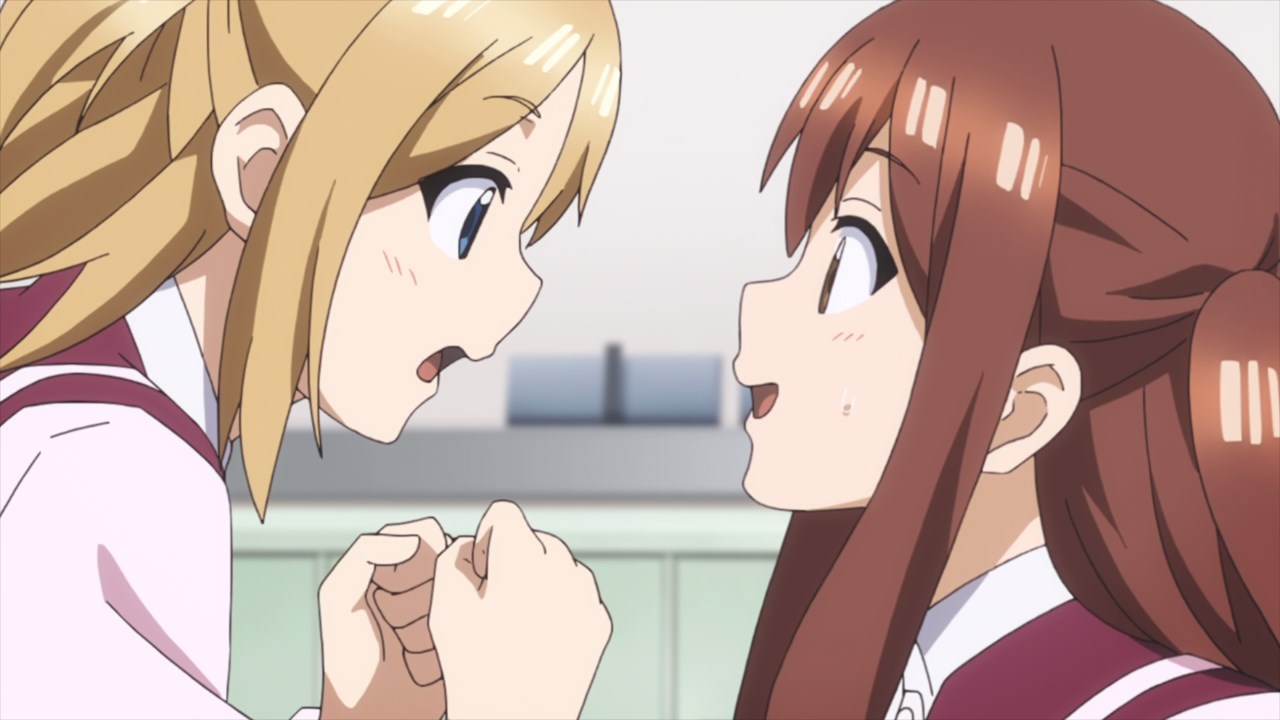 There, she was greeted by Yoshino Kawaguchi who is a baseball fan, although Yoshino told Yomi that it would be nice if the girls’ baseball club is not suspended. 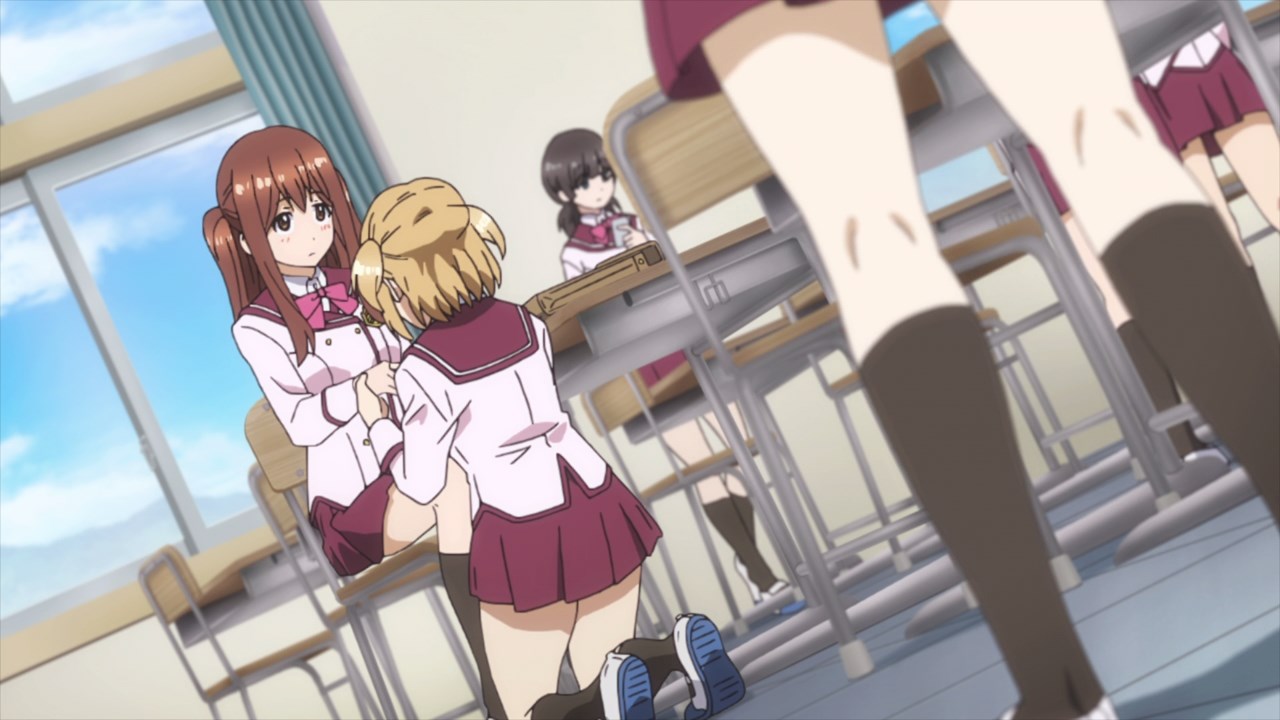 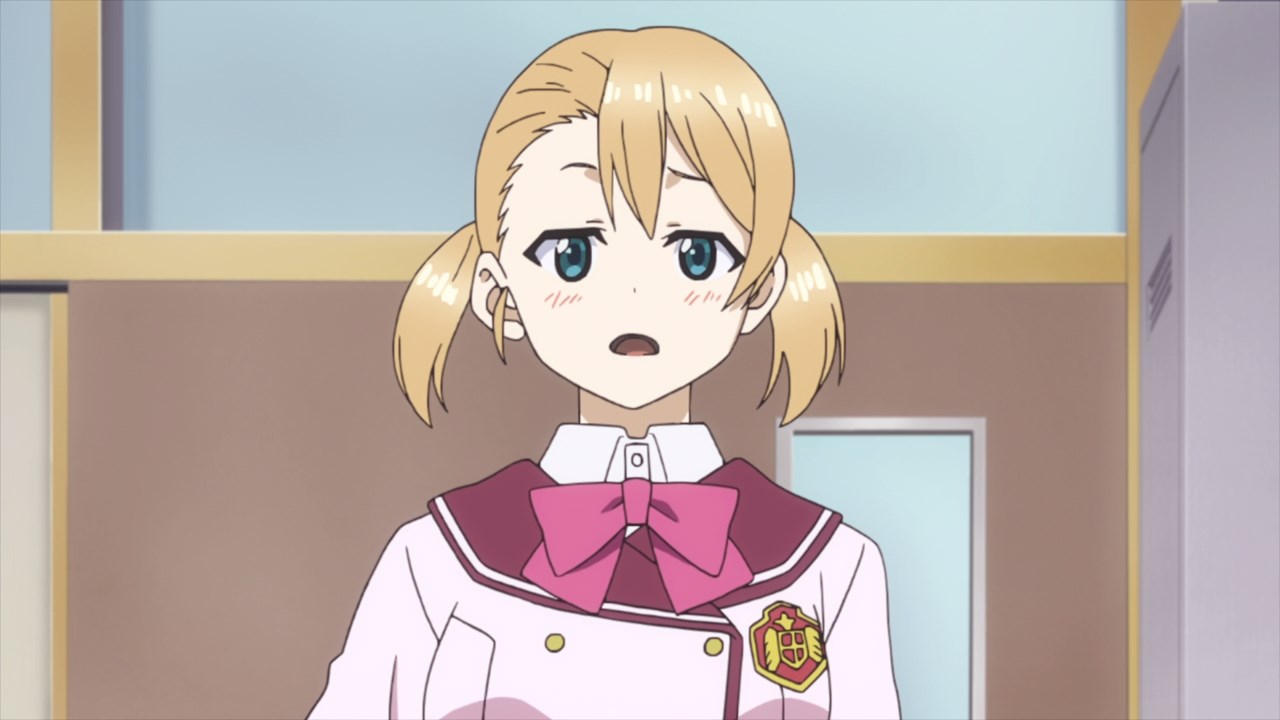 Oh yeah, here’s another character introduced named Ibuki Kawaguchi who is Yoshino’s older twin, although Ibuki is not a baseball fanatic compared to Yoshino. 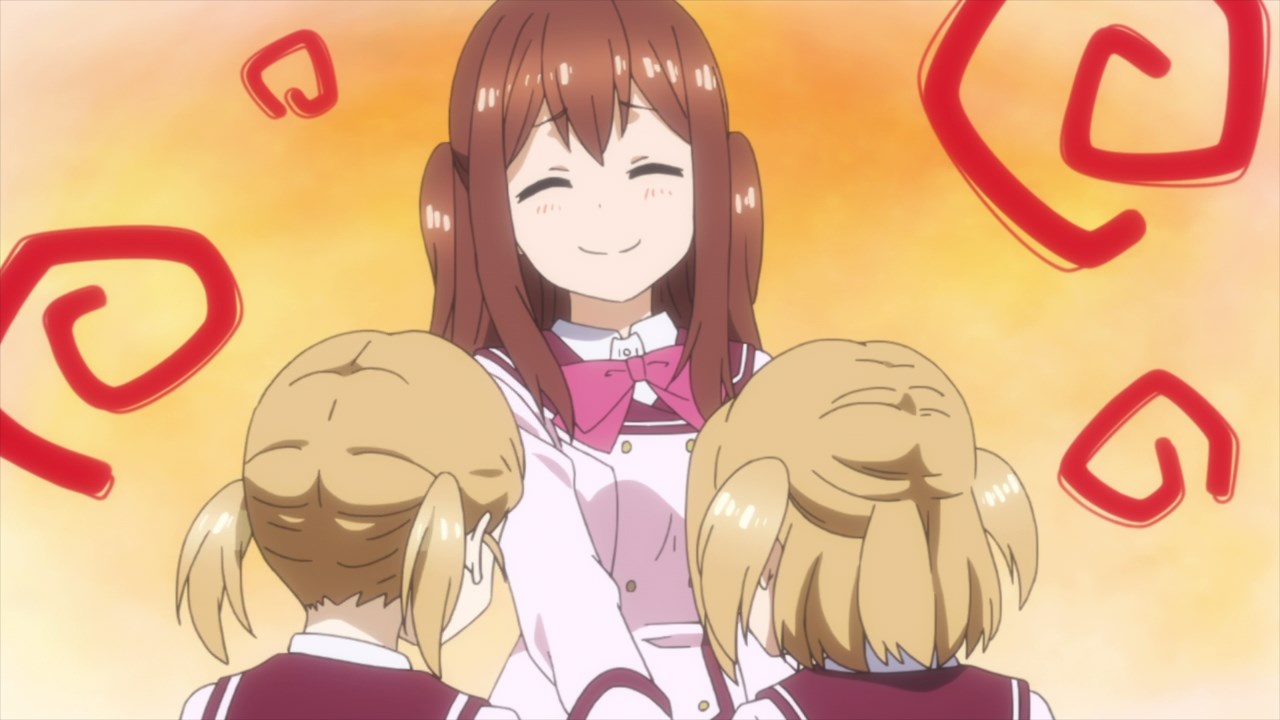 But eventually, Ibuki went towards Yomi as she’s interested on her hardened hands. Oh and forgot to mention that Yomi Takeda plays baseball, although she didn’t play much during middle school. 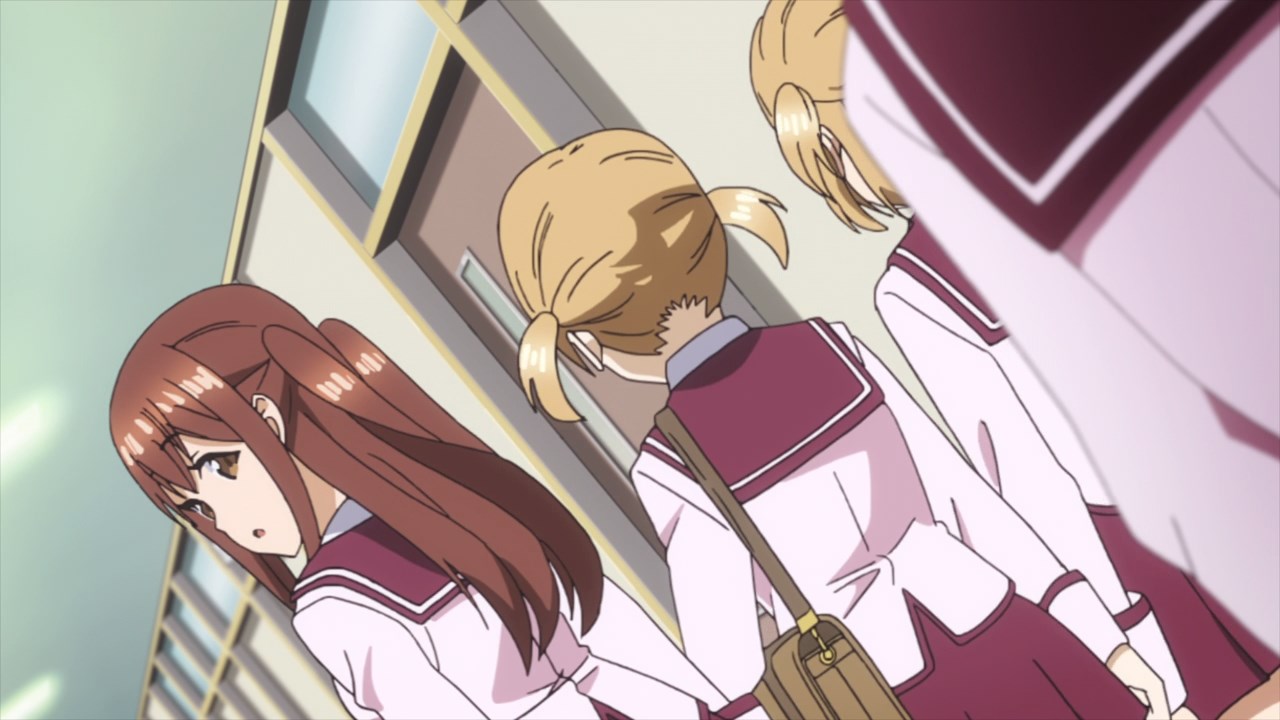 One more thing, it appears that Yomi saw someone who’s very familiar to her. 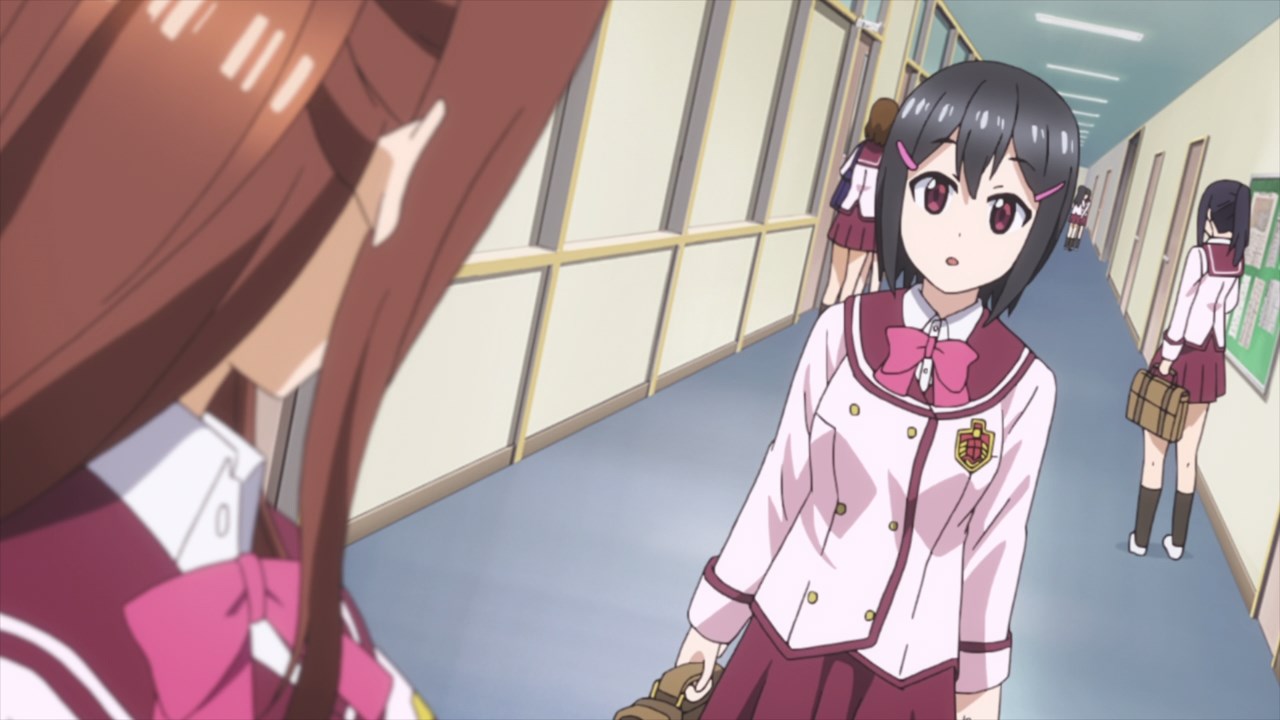 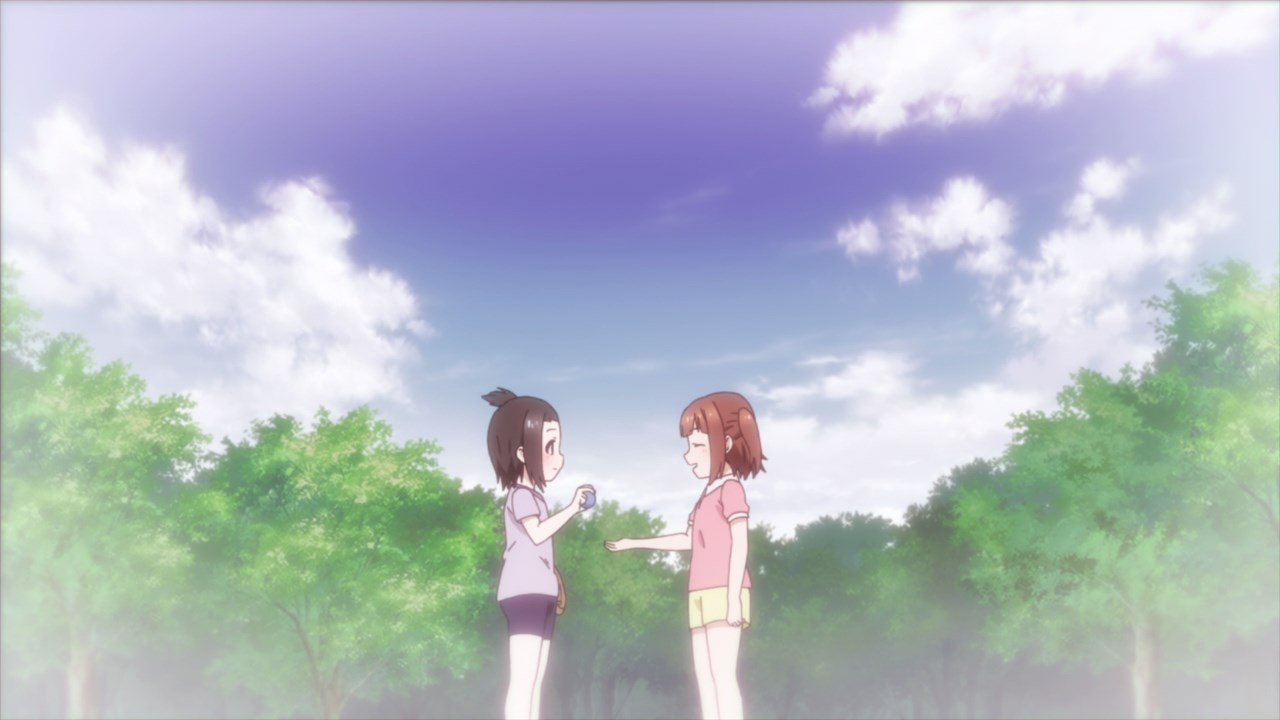 In fact, Tamaki and Yomi promised that they’ll play baseball together. Unfortunately, they went to their separate ways during middle school. 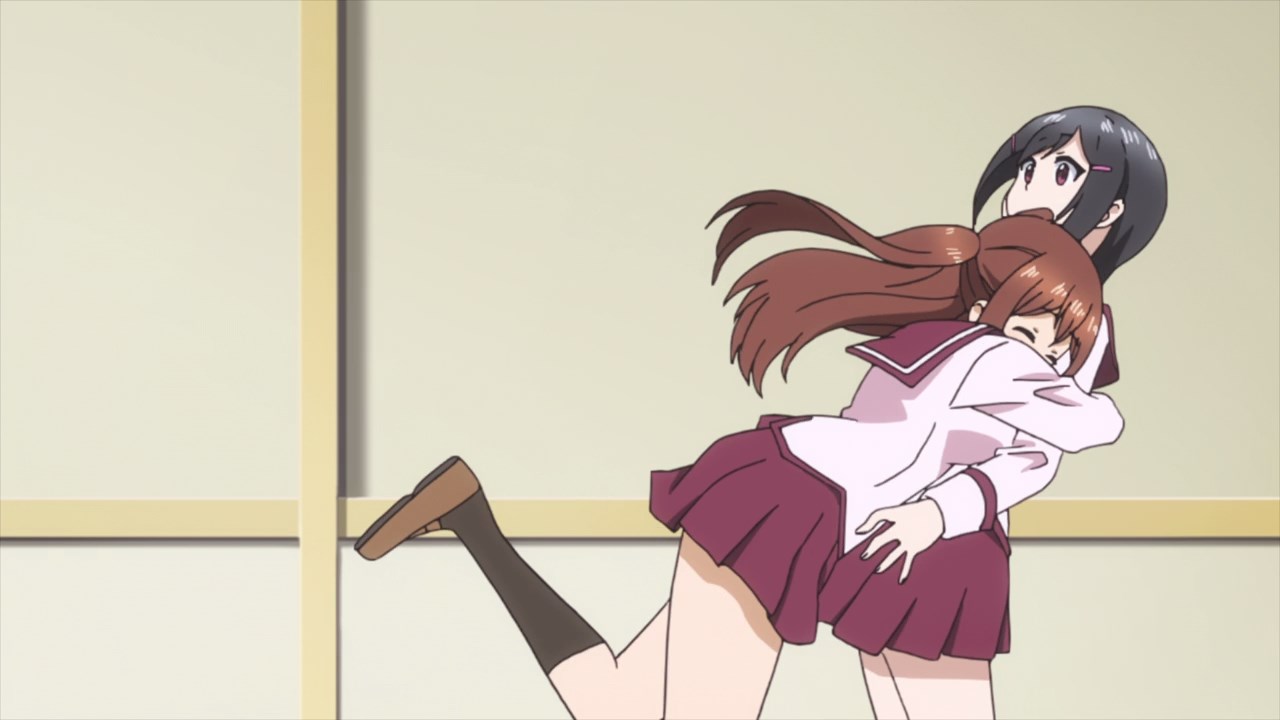 But now, they’re reunited in Shin Koshigaya High School and I have to say that Yomi really missed Tamaki so much. 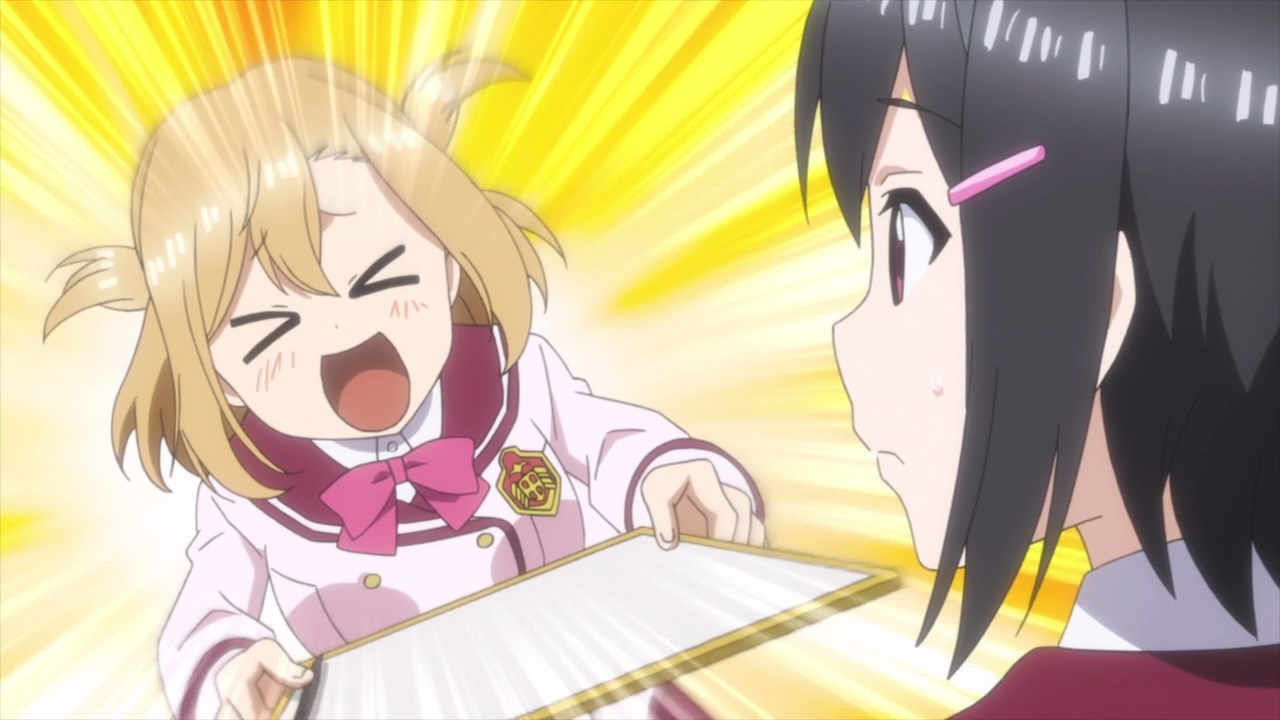 Also, looks like Yoshino wants Tamaki to sign an autograph as it turns out that she came from the prestigious Minami Girls’ Middle School who got pretty far in the national tournament. 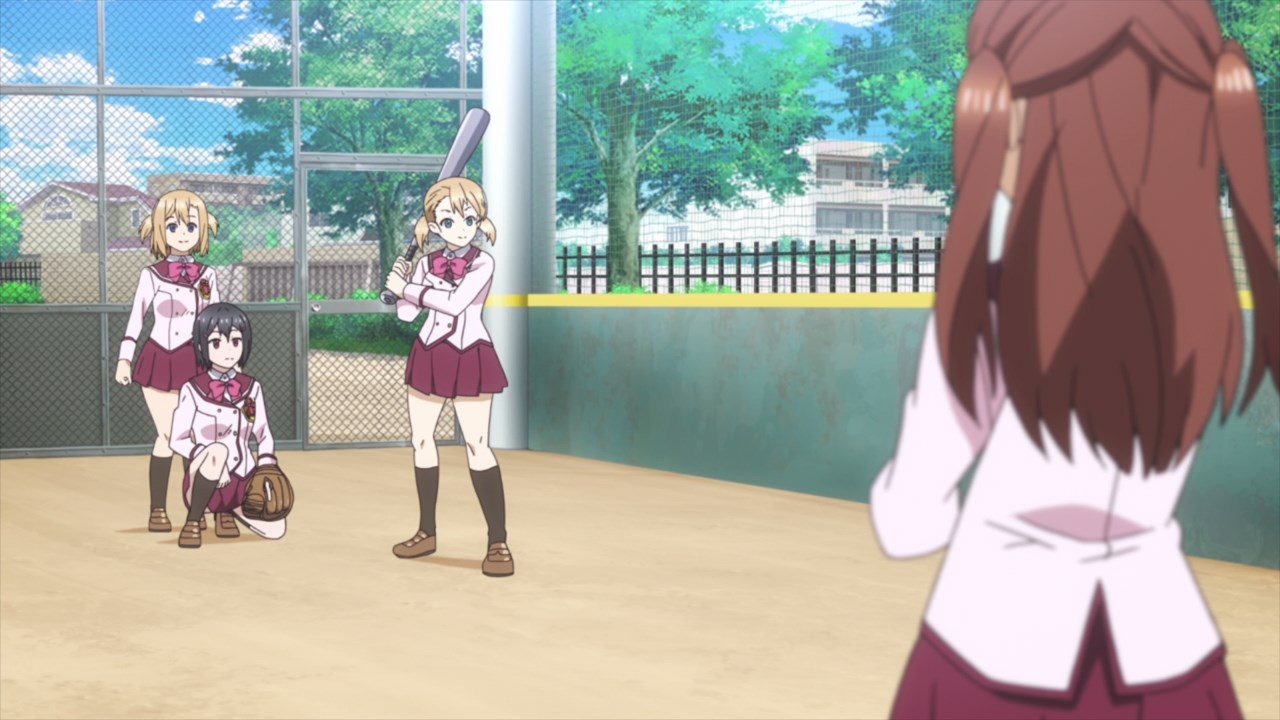 Now then, since the childhood friends are finally reunited, it’s time for Tamaki to see if Yomi can pitch like a professional player. 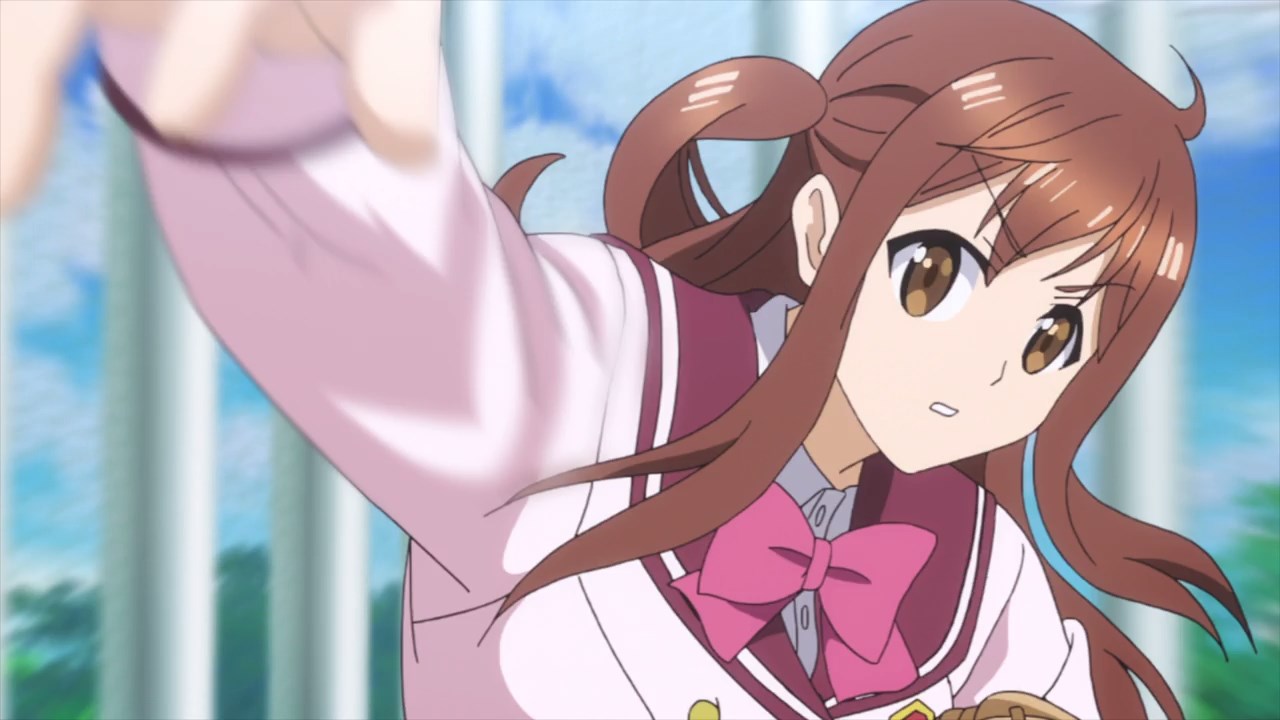 Well then, let’s find out as Yomi Takeda throws a typical fastball. C’mon, it’s easier for Tamaki Yamazaki to catch it. 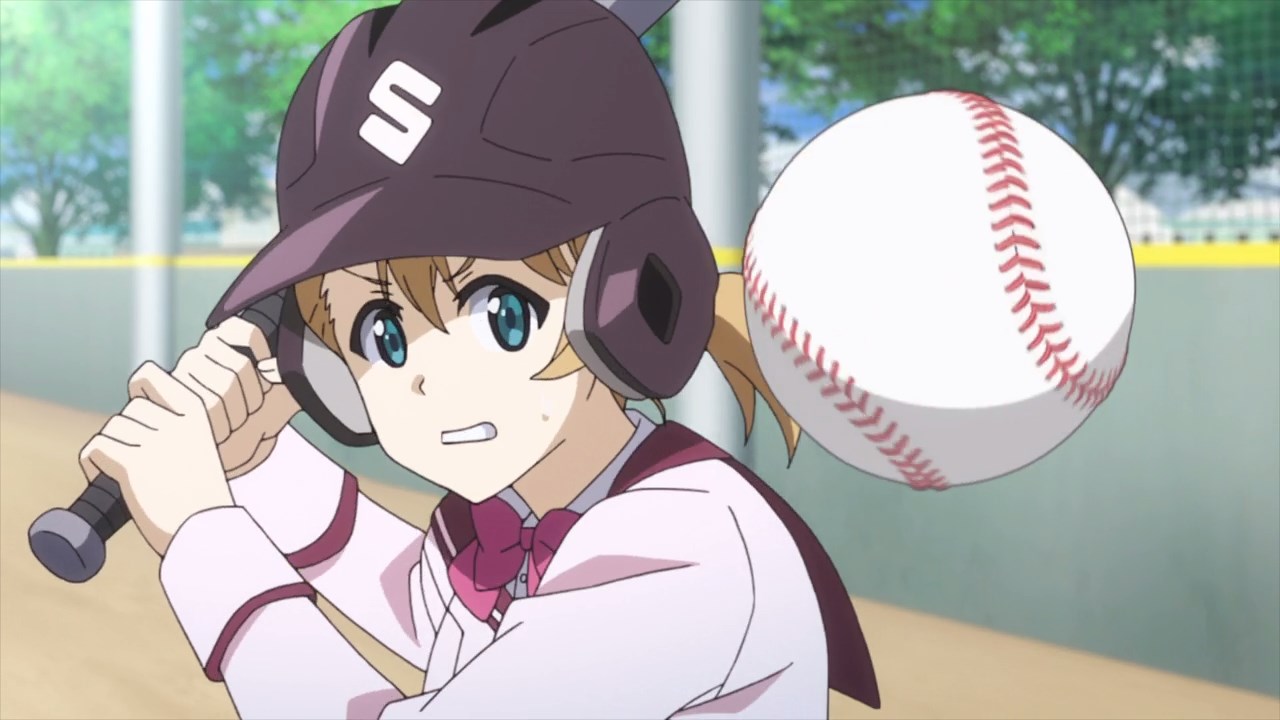 However, it appears that the ball is going straight towards Ibuki Kawaguchi’s head.

I’m having some horrible memories of players getting the bean ball like this one, especially when you watched Major. 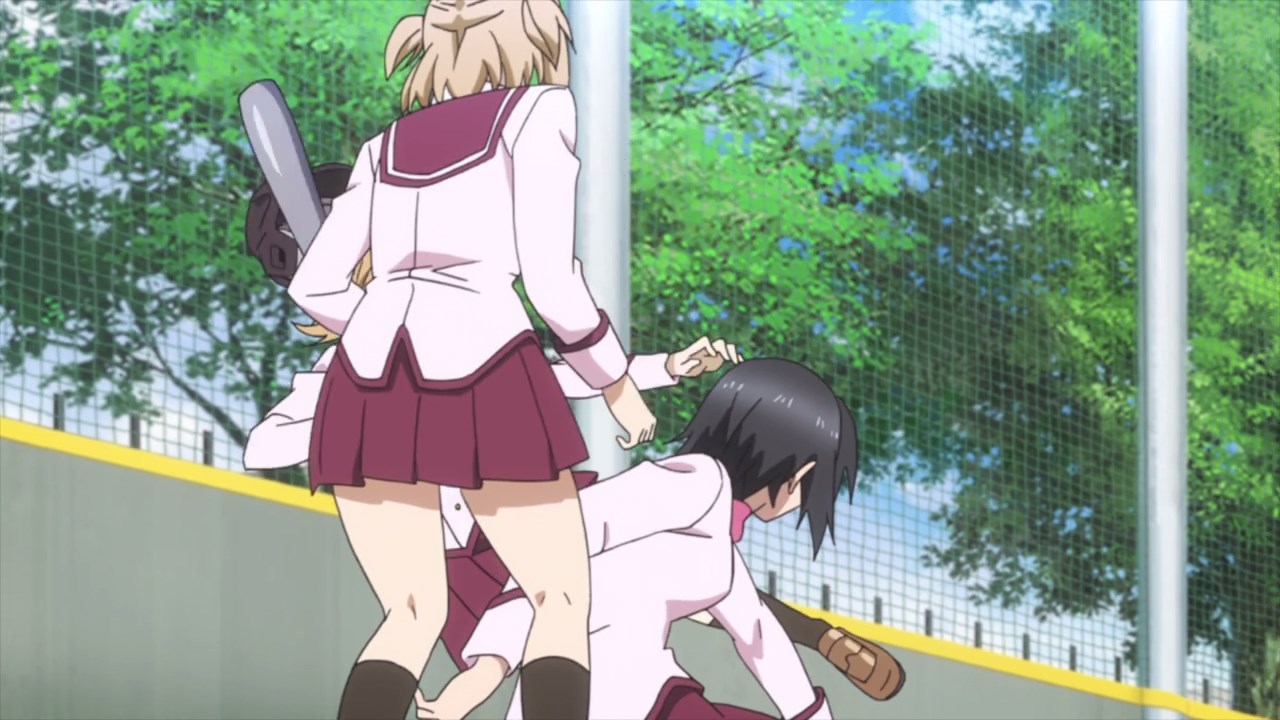 Anyways, Ibuki Kawaguchi scared the wits out of her as she got hit by a nasty wild pitch… or is it? 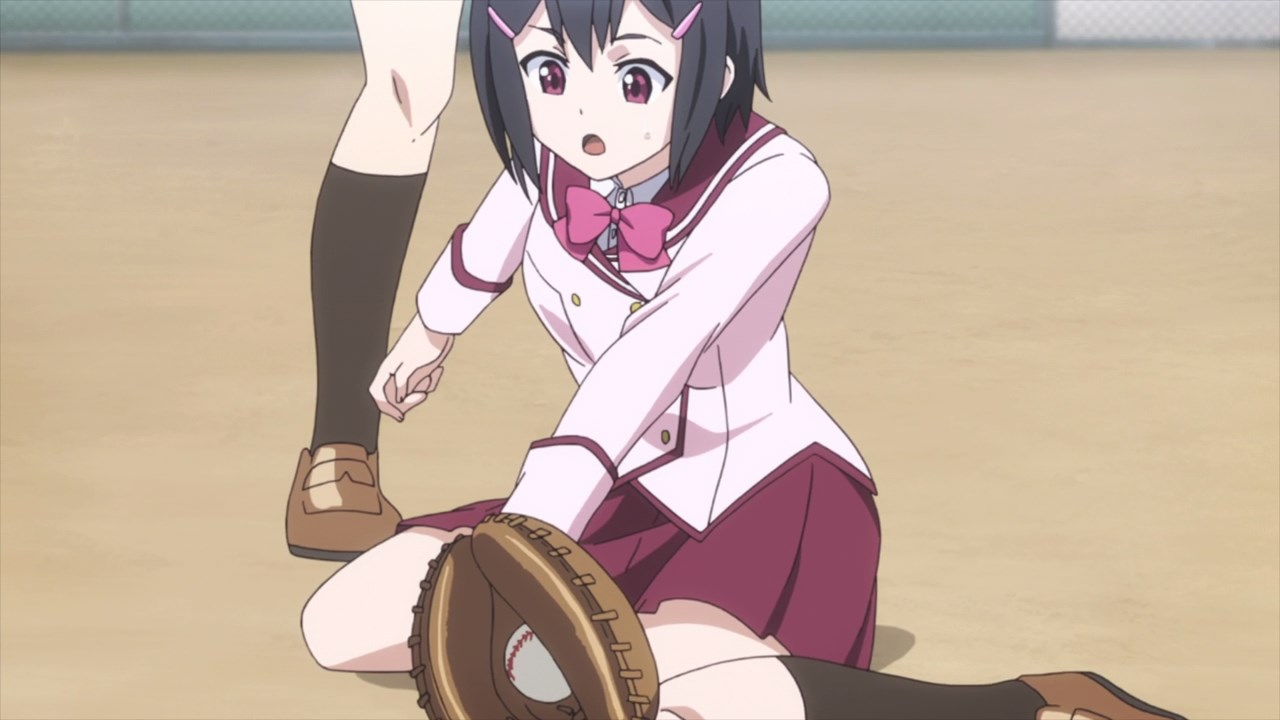 Turns out, Yomi’s wild pitch went into Tamaki’s mitts as she catches it.

Glad that Tamaki catch that wild pitch but I was wondering how did Yomi pulled that off? 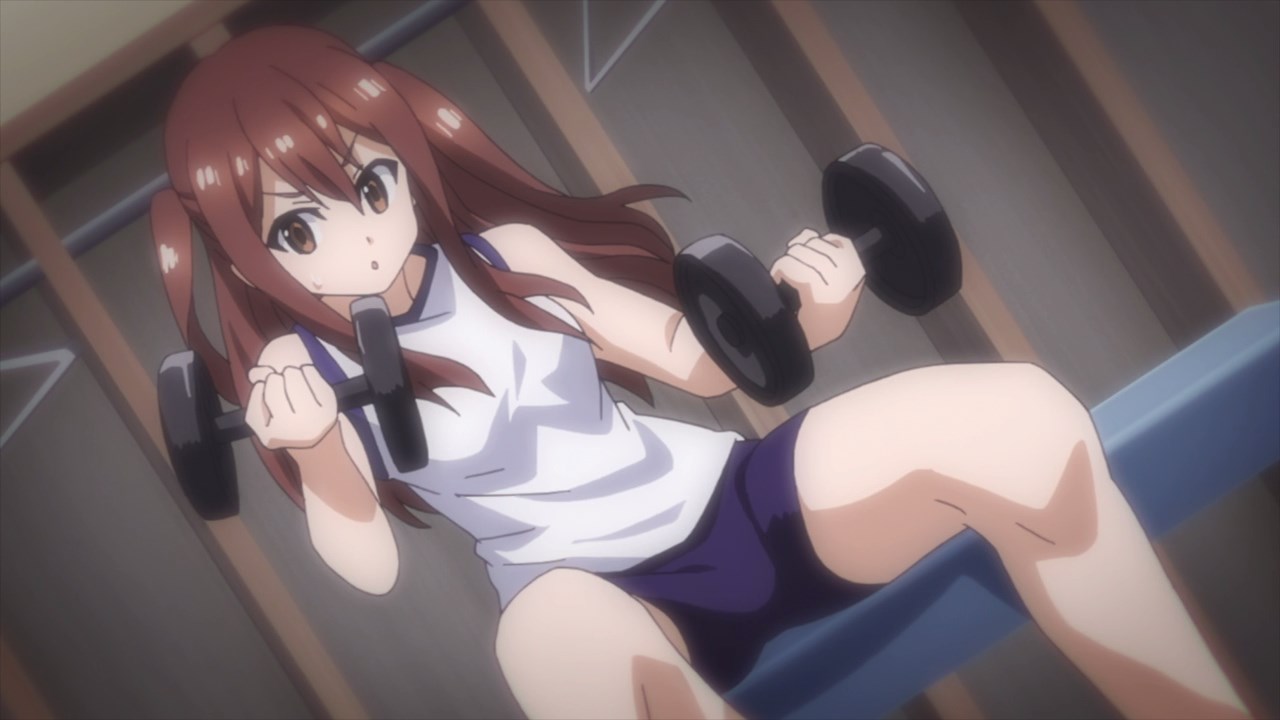 Well, let’s go back to her middle school days as Yomi Takeda trained hard to throw a special pitch that has the characteristics of a fastball and a curveball. 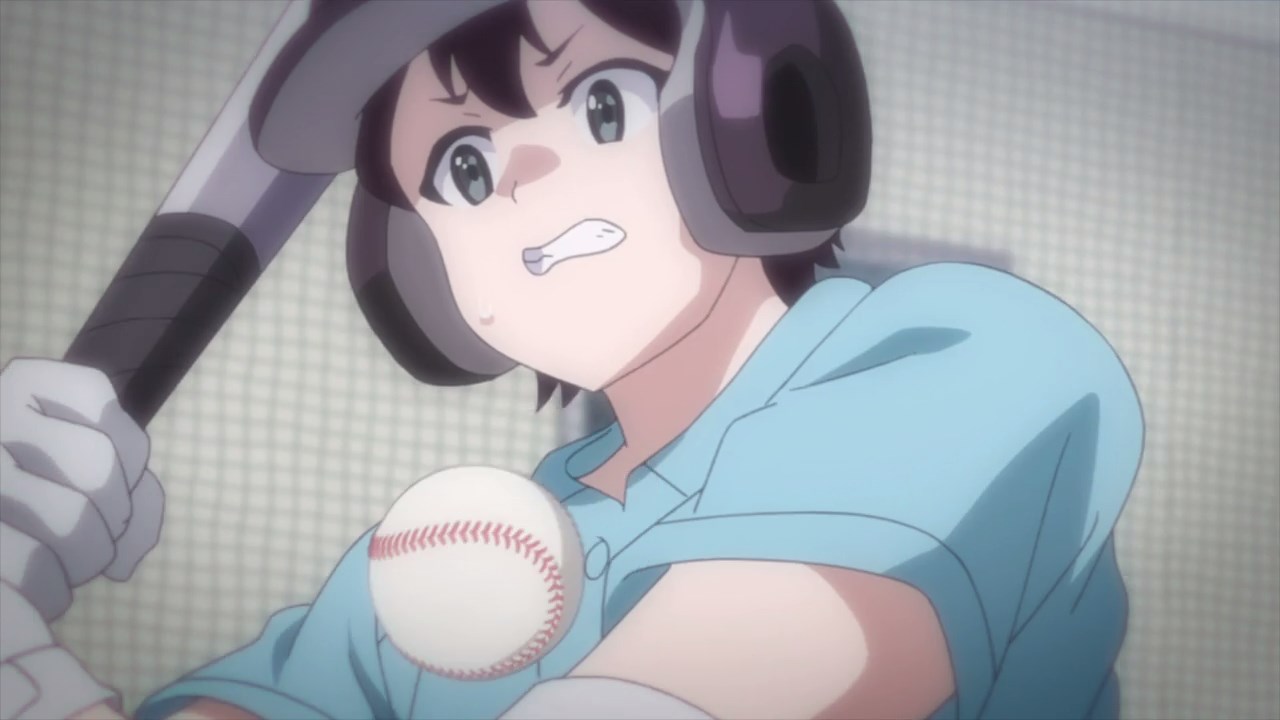 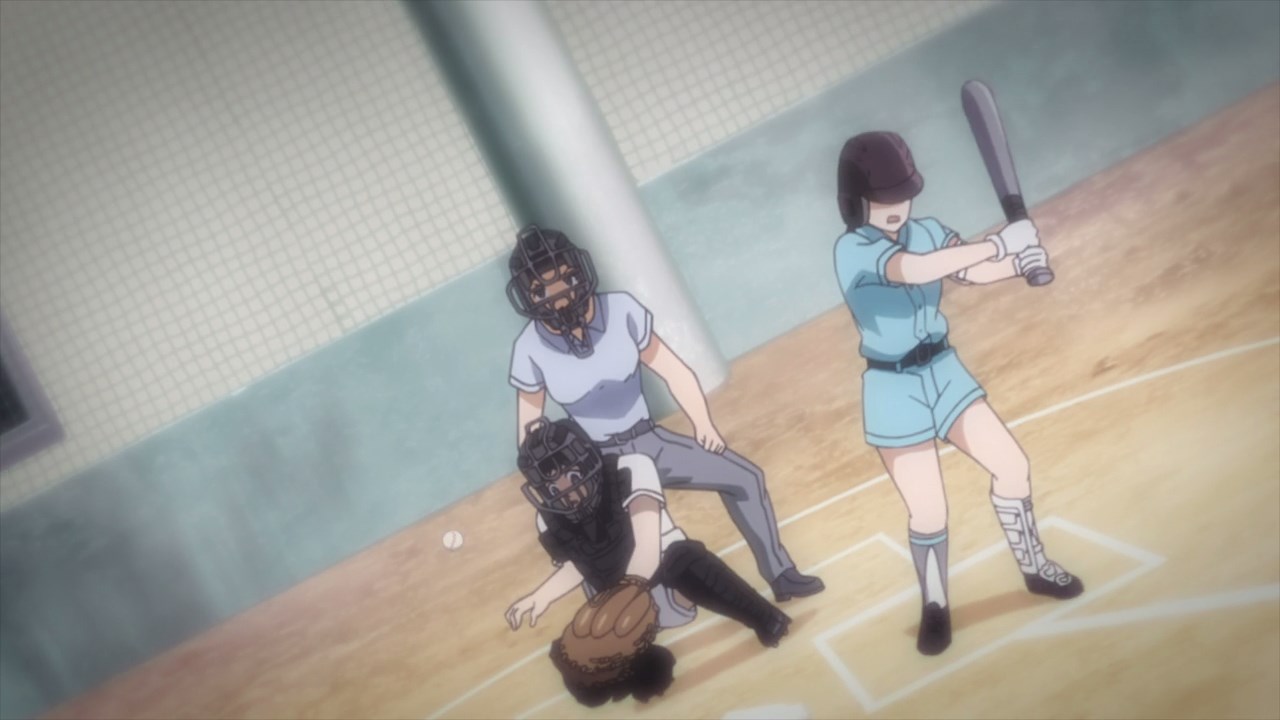 And when Yomi throw that special pitch, many of the batters got scared that they’re gonna get a bean ball, but at the same time the catchers are having a hard time catching Yomi’s pitches. 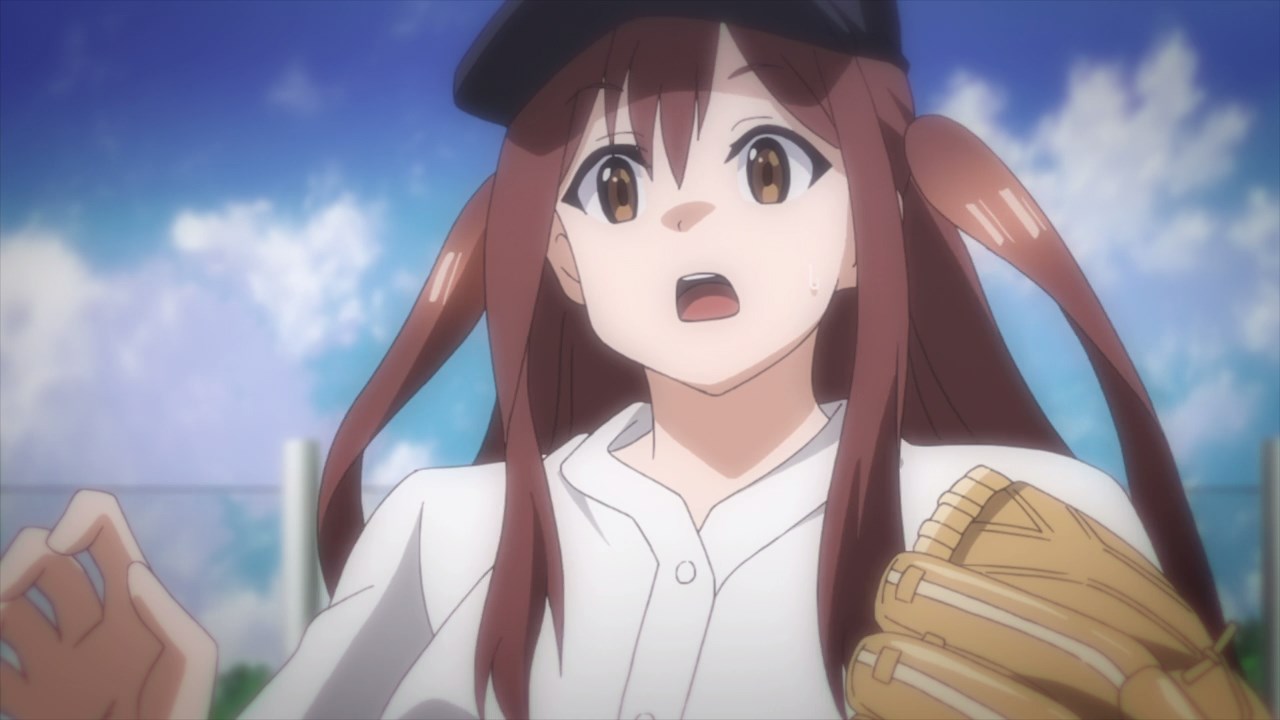 Anyways, Yomi’s teammates told her not to throw that pitch or they might cause more trouble. Ultimately, they lost the first round and that was it for Yomi Takeda.

I have to say that it was a shame that Yomi couldn’t reach her full potential during middle school, where it turns out that most of her teammates are not serious on playing baseball in the first place. 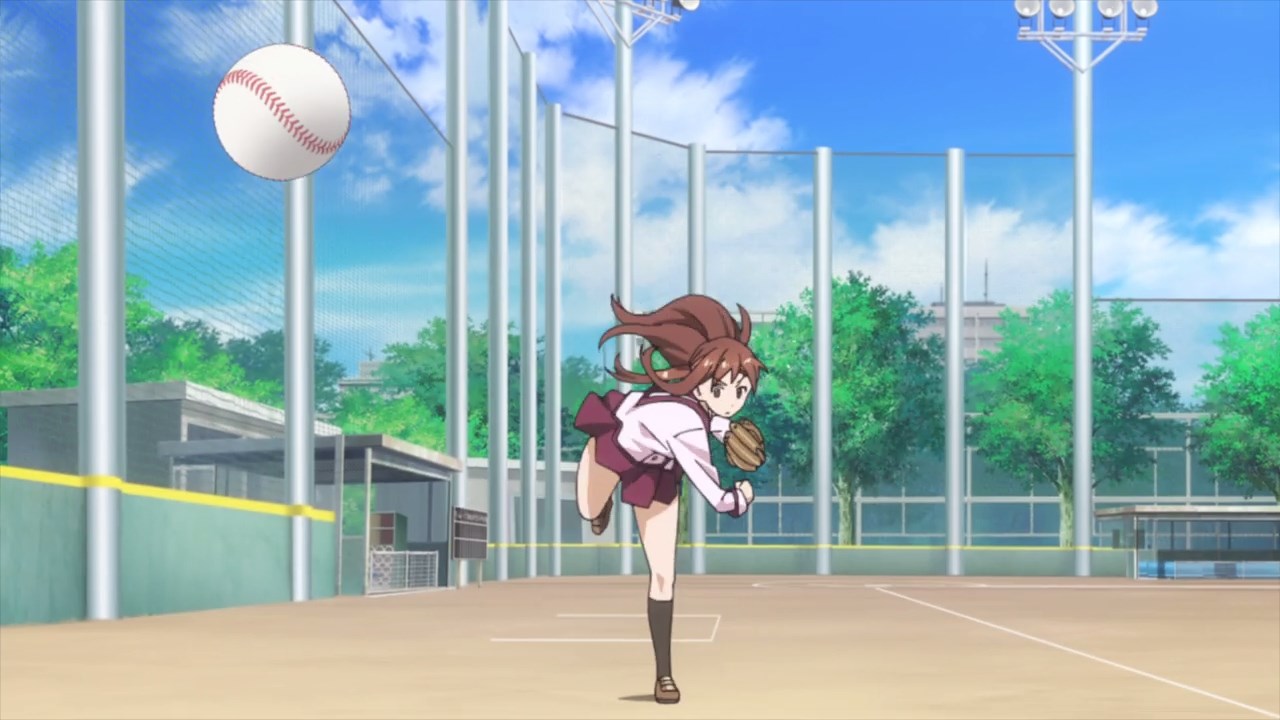 With that said, Yomi Takeda can finally play baseball now that her childhood friend is here. 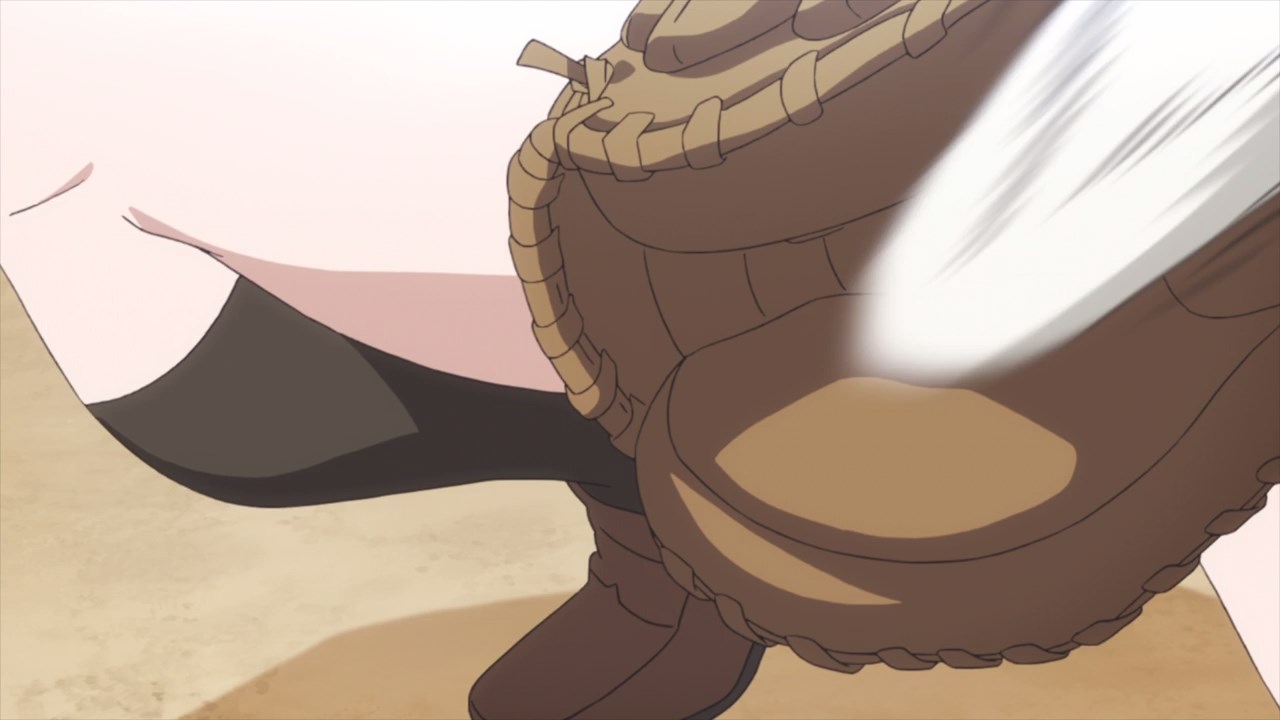 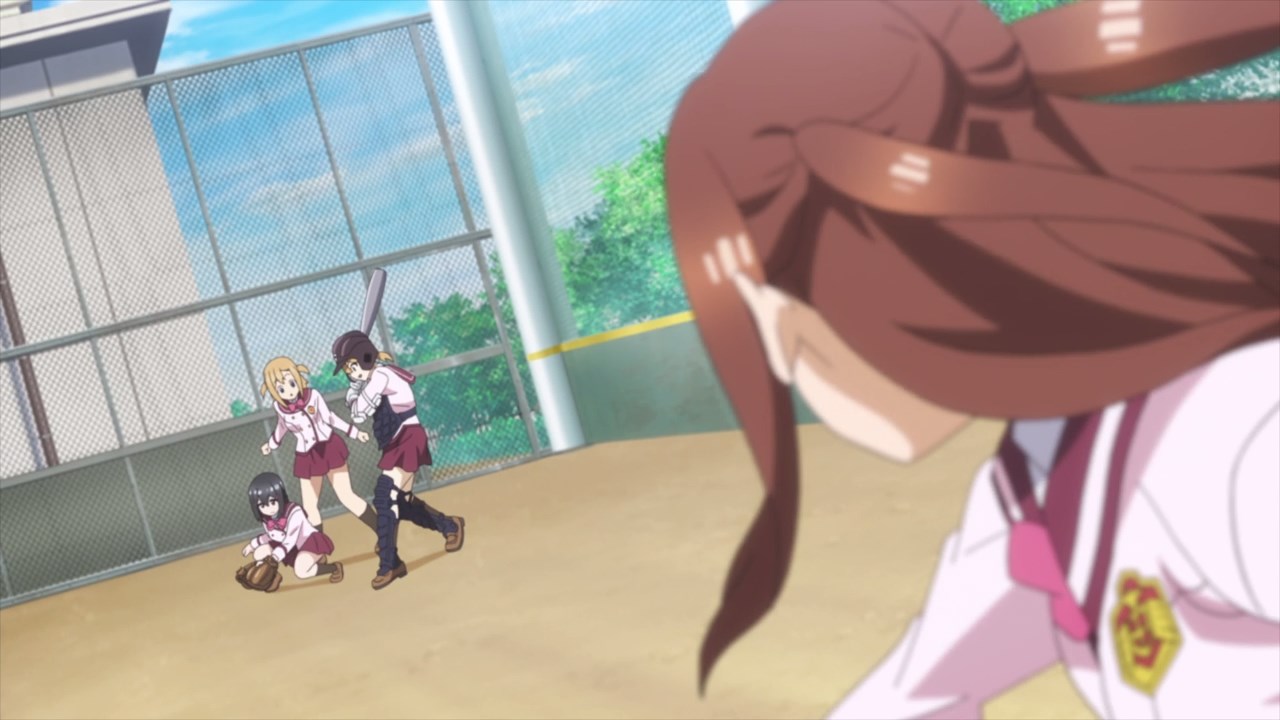 And really, Tamaki Yamazaki can catch Yomi’s pitches which makes them a perfect duo. Of course, they need to have more members to make a proper baseball team. 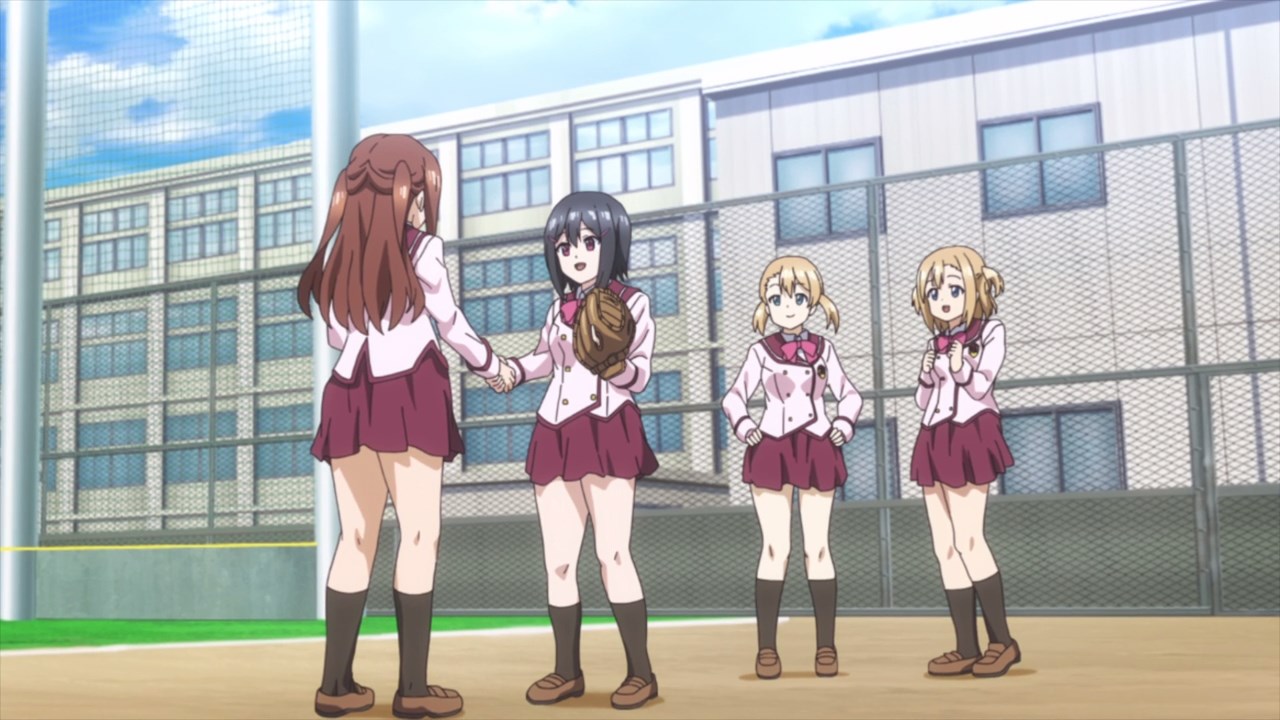 Well then, looks like Tamaki is happy to not only see her childhood friend for a long time, but Yomi still has the passion to play baseball. 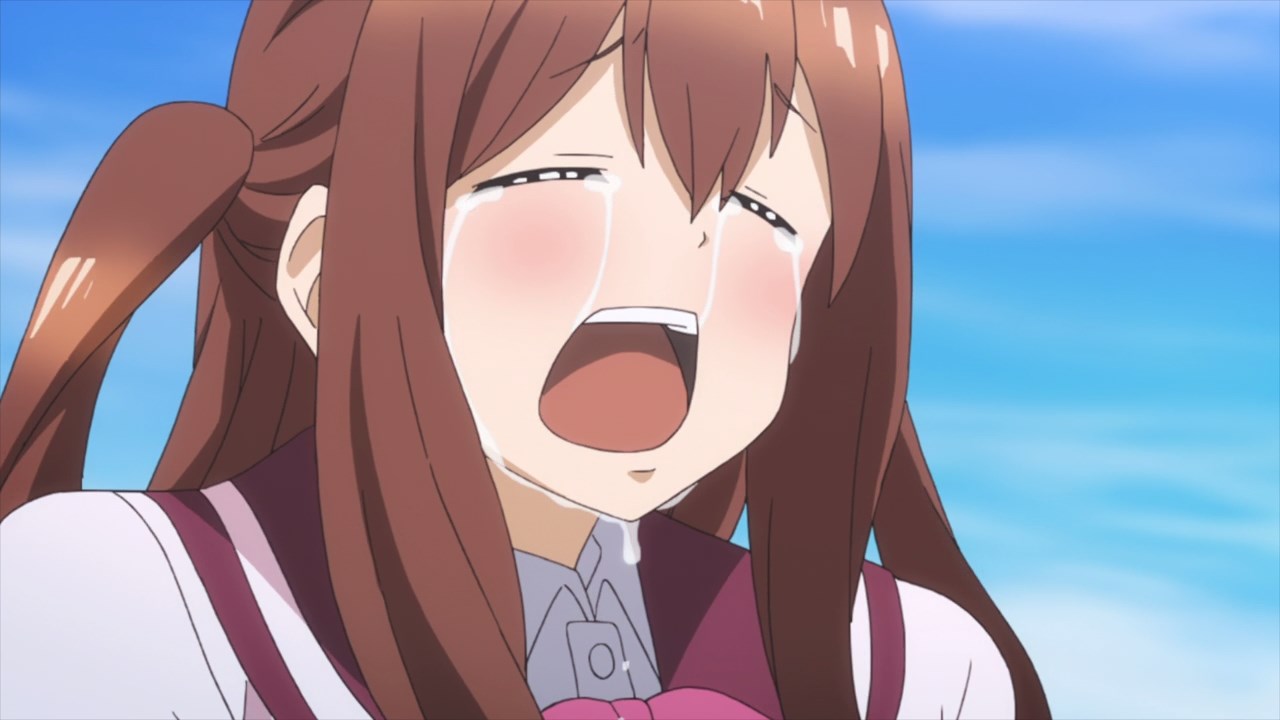 And speaking of Yomi, she’s getting teary-eyed that are people who are also passionate when it comes to baseball. Don’t cry Yomi, you got friends who wants to play ball with you! 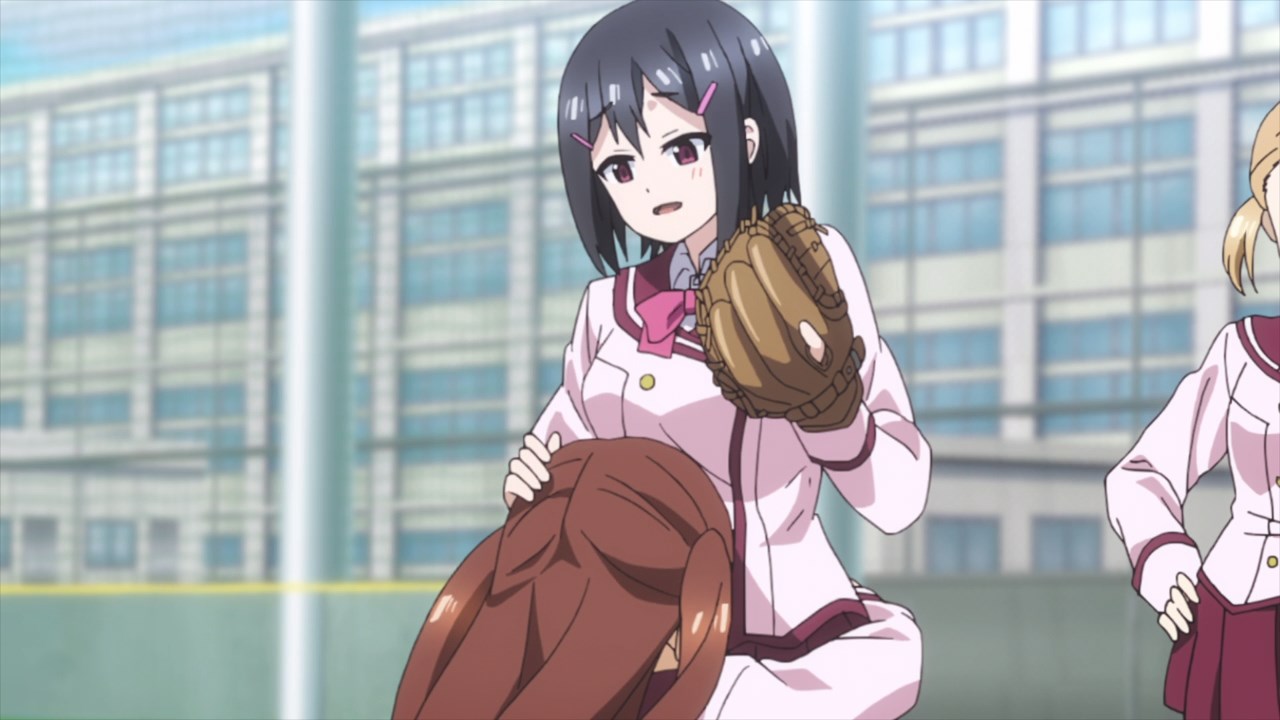 Anyways, I’m done with the first episode of Tamayomi and I have to say that the premiere somewhat decent.

While it’s not amazing when it comes to visuals, it has an interesting premise where you have girls who wants to play baseball. But like I said before, they need more members in order to revive the now-suspended girls’ baseball club. 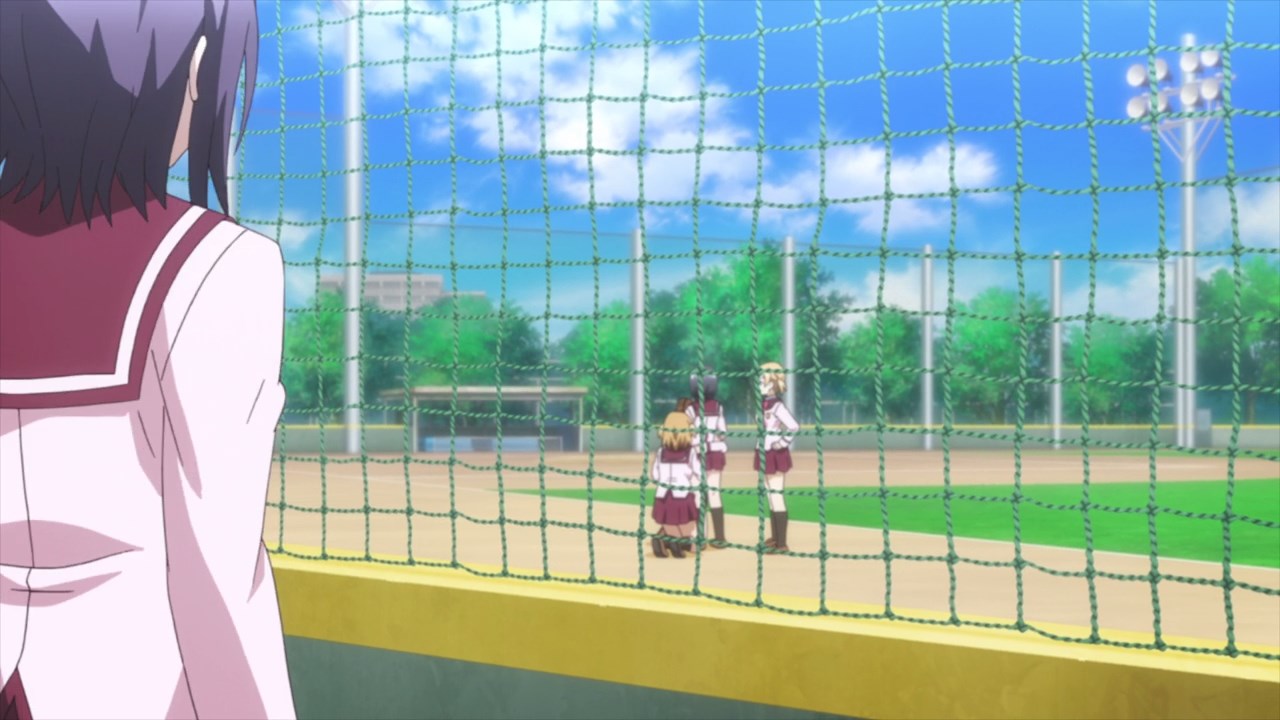 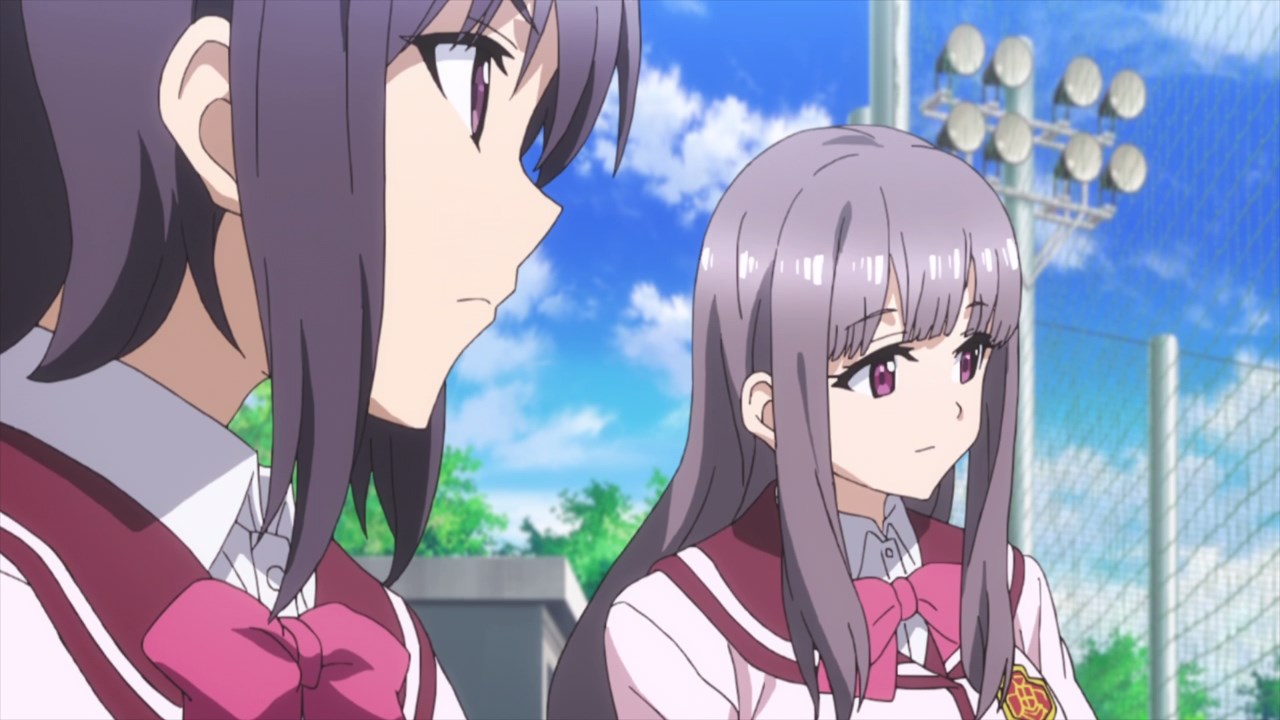 On second thought, looks like they’re getting more but that would happen on the next episode. Let’s hope that these two girls will join in.